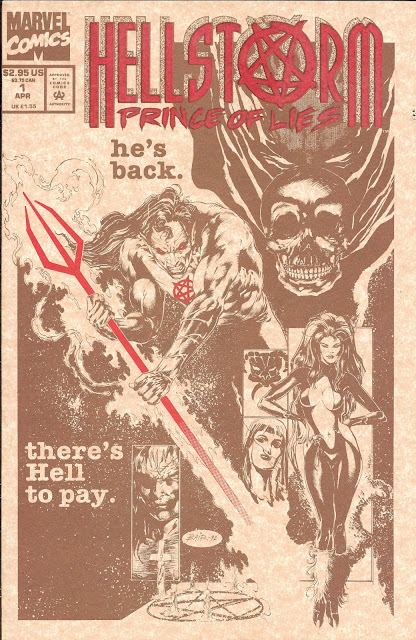 Forget everything you know about the Son of Satan

What deviltry is this, you may ask?

Who in the hell would resurrect Marvel’s very own Son of Satan and do such a poor job of it? And why? Why on God’s green Earth would we need an abortive attempt at turning Daimon Hellstrom into a title worthy character by jettisoning everything about the poor fella?

For that you would have to ask Fabian Nicieza, which we will do when I review issue number two of this ill-fated reboot.

For now, lets concentrate on where the original “Coke Classic” version Hellstrom came from. Stan Lee, ever chasing successful comic book trends, took a look at sales of Ghost Rider and The Tomb of Dracula and proposed a series starring Satan. Editor Roy Thomas took Stan’s “Mark of Satan” down a saner course by slightly altering the concept to be “the SON of Satan” and not the big-bad himself. As Defender’s writer J. M. DeMatteis put it so well, “Characters like Son of Satan are a wonderful metaphor for what we all contain, good and evil, high and low aspirations. He's literally the son of the Devil, trying not to be what his father is. For a writer like me, how can you not feast on that?”

DeMatteis also called Daimon his absolute favorite character. I’d really like to get his thoughts on this iteration.

The original book that evolved from the character's appearances in Ghost Rider and Marvel Spotlight was short-lived, lasting only eight issues. There were controversies, of course, in that the book featured depictions of Satanism and Wiccanism that were more fanciful than grounded. In many cases, people opposed Marvel "promoting the cause of evil" by bringing Satan into things. I think Stan knew he would take some hellish heat for this and looked to stir that pot for some free publicity.

Either way, the character entered b-list territory and wound up on the line-up of J. M.’s Defenders, where DeMatteis was doing some incredible things with some really non-standard, low popularity characters. Hellstrom received a redemptive arc, lost his half-devil heritage powers and married Patsy Walker a/k/a Hellcat.

Or to you Jessica Jones fans…this lady: 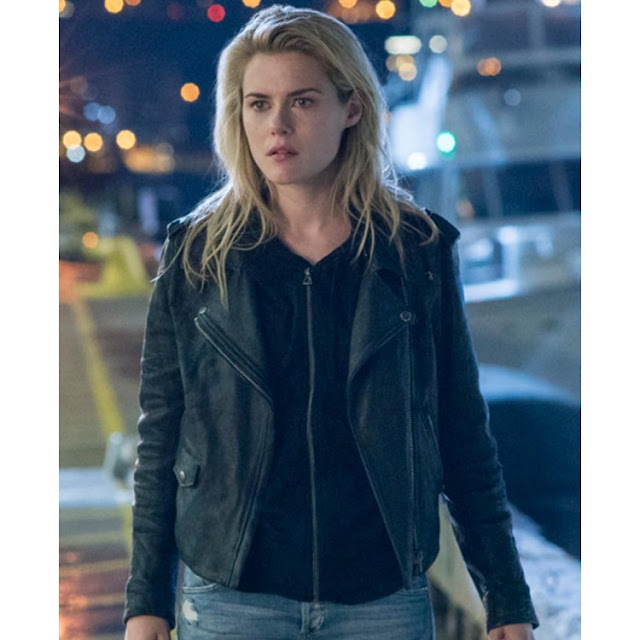 And then he faded into obscurity, popping up only once in a while when a story needed some authentic devil expert or some-such.

Tomorrow we will take up how he ends up with his own series again, but we’ve beaten around the bush for too long. Let’s just launch right in to HellstORm #1 (and yes, the old-school 70’s me really hates that name change)…

Perhaps we should start with the sad part of this: Michael Blair’s art. It’s not sad in the traditional Crapbox way. You know, the way in which I bemoan problems I see in how artist represent things or how pages are laid out or anything pointing to deficiencies in how things are rendered to the page. 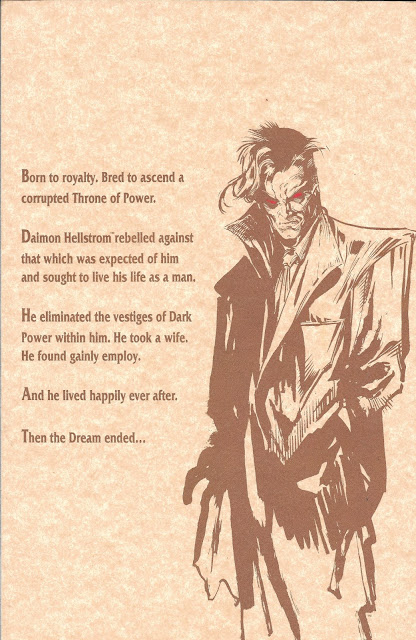 No, I believe Michael Blair’s art is phenomenal and fits this genre like a glove. He seems inspired to give his all toward this property and we get some really gorgeous pages. I especially love the non-slick, wrap-around cover of the book, which would have tempted me into plunking down my $3 had I been in the market at the time and had a job making enough to afford comics.

The problem is Rafael Nieve’s storyline and dialogue. Nieve once was nominated for a couple of Eisners for a graphic novel series about a Peace Corps volunteer co-written with Cindy Goff, so it’s not that I think he can’t write. It’s more that I think this is not his character and not his genre. And some of the dialogue makes me frustrated to read it. I will tell you tomorrow WHY I think Nieve’s angle on Hellstorm (ugh, not his name) didn’t take with me.

And I gave the book every chance to wow me. It started with this weird reborn into the universe intro of Daimon as some human-demon thing that some evil voice-over narrator is talking about. 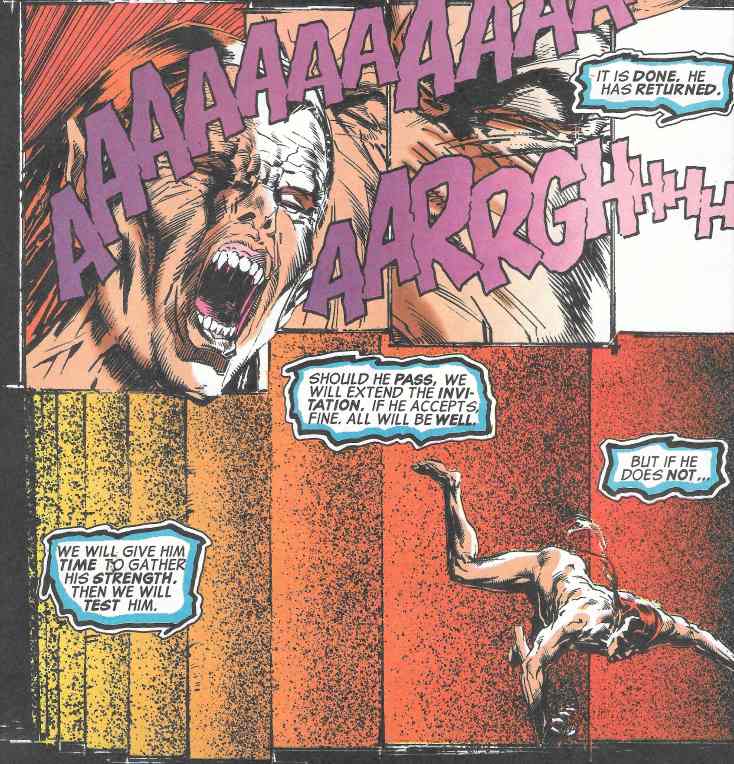 Blair’s art pulled me right into the story and I was ready for Nieve to do something interesting with a character that I had little interest and involvement with. 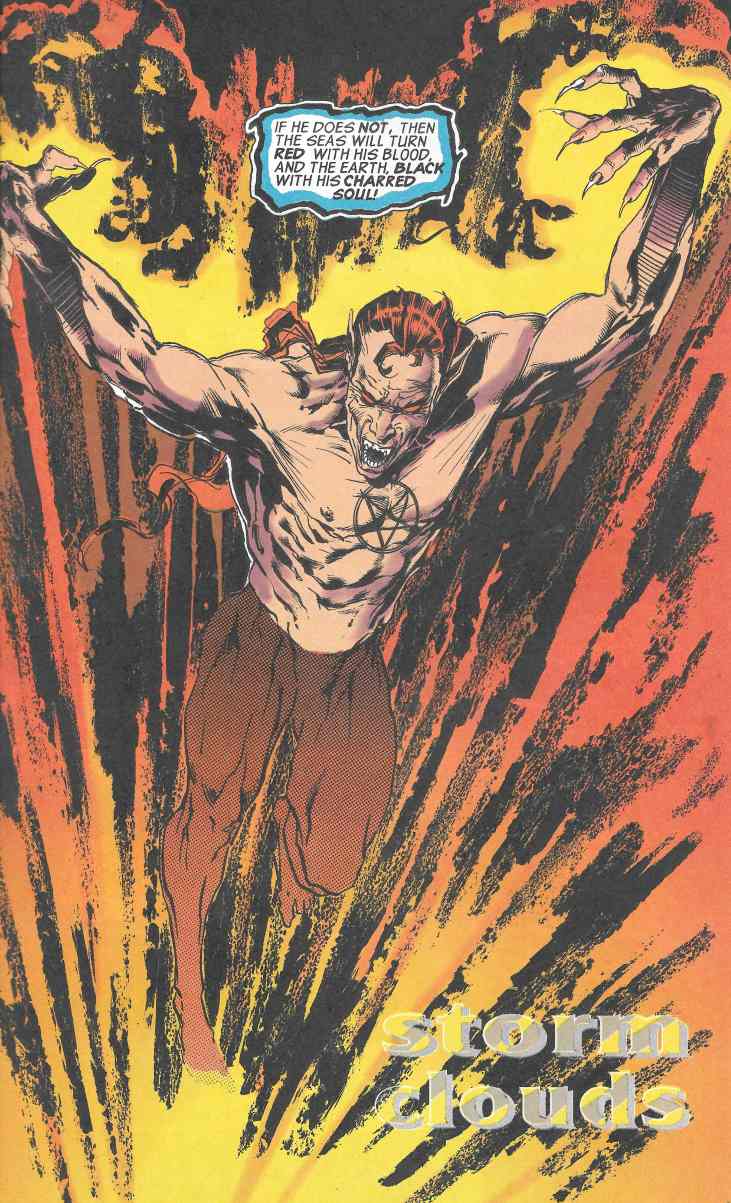 But with most comic book concepts, it is easy to pull people in with mystery and portent. However keeping that level of interest is hard if you don’t have something going on behind all of it that they really want to read.

Or if you jump around too much. Like maybe switching to a character we don’t know anything about. Such as Dr. Avram Siegel, a demonologist who somehow gets a huge laugh out of a group of Evangelical Christian housewives with an awful, horrible joke. 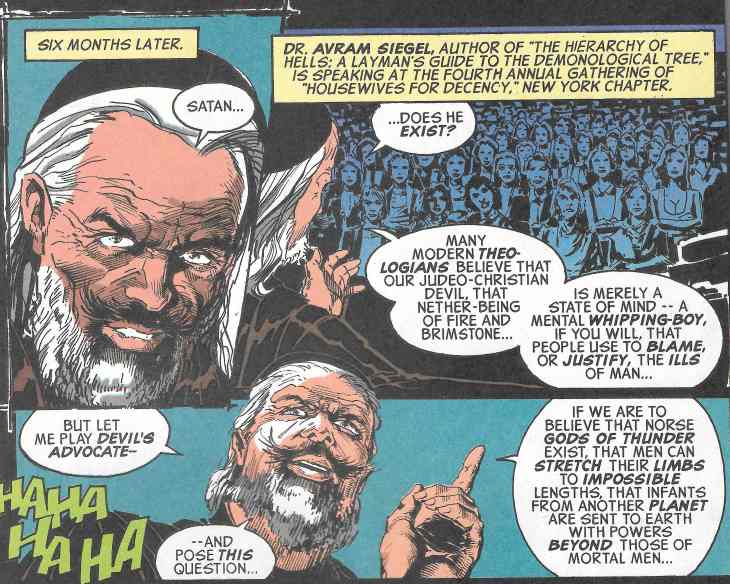 Siegel will factor in later. Lets move on…
…to Hellstrom..er? Hellstorm, you might ask? No. To a wino/hobo who gets murdered because…why again? 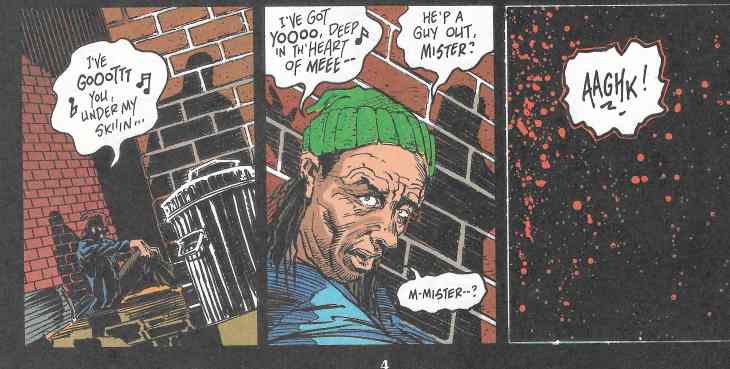 …this is page three, folks. Think it gets better?

Nope. On to page four, where we find this one-eyed Jason Blood type exorcist guy bilking money from rich socialites who believe they are possessed so he can afford money for his alcoholism. He also writes a column for a “National Enquirer” type mag on the occult. Meet Mr. Gabriel everyone. 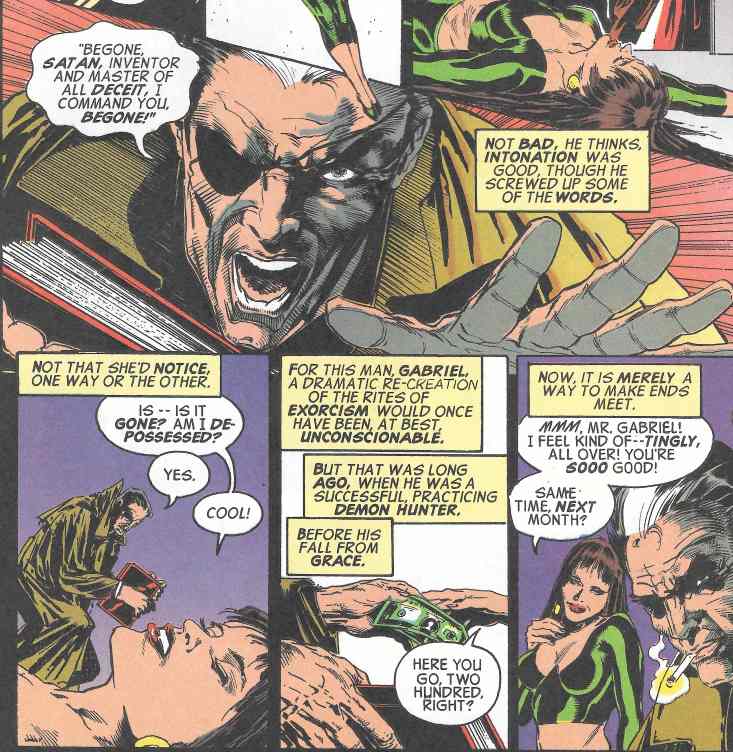 Now I know what you are thinking: these are seeds that will end up being harvested at the end of tale, whether that is this issue or this arc. In a way you are correct. These do all feed back into Hellstorm’s new identity and our story setup. They just don’t do so in a satisfactory way.

We have a successful demonologist, a down on-his-luck exorcist, and a corpse…add in Hellstorm and you could have a good Doc Savage or The Shadow pulp mystery group only this time with demons and devils. Sort of like what Doug Moench did to DC’s The Spectre back in the late 1980’s.

But no. What we get is a mess. First we have the two side characters meet, with Gabriel getting a note that says “Beware the Black School” from…no one? The writer, I suppose, because there isn’t anyone in the story who would likely warn Gabriel. (There is a reason later, but it is horribly dumb) This is used as a plot device to have him contact Dr. Siegel and to then exposition dump on the audience a bunch of satanic hooey. 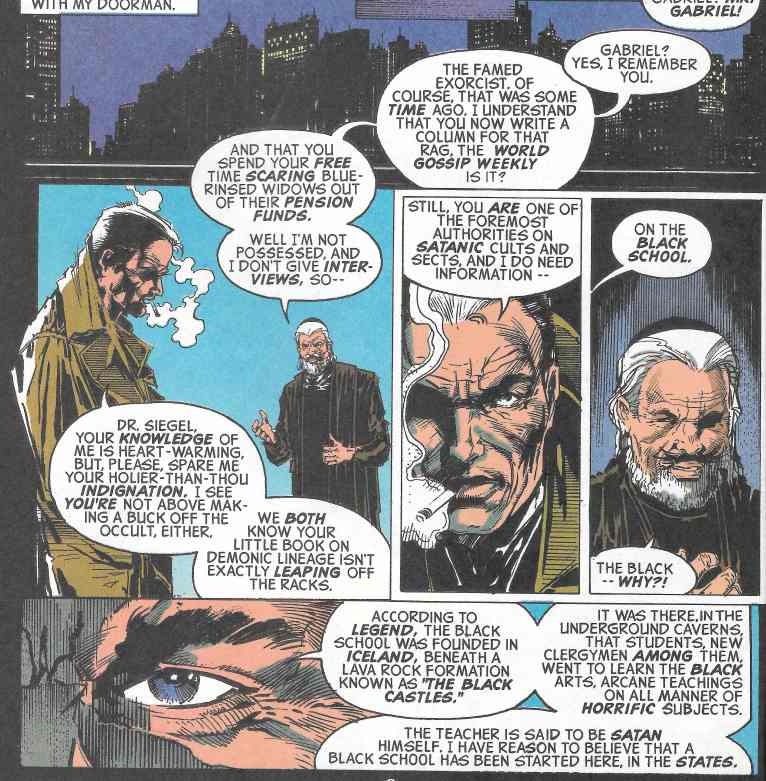 While the Black School in San Francisco is shown brutally murdering the hobo from before (sorry, tales of his corpse-hood were a bit premature on my part…but not by much), Dr. Siegel mentions Daimon’s name for the first time in the book… 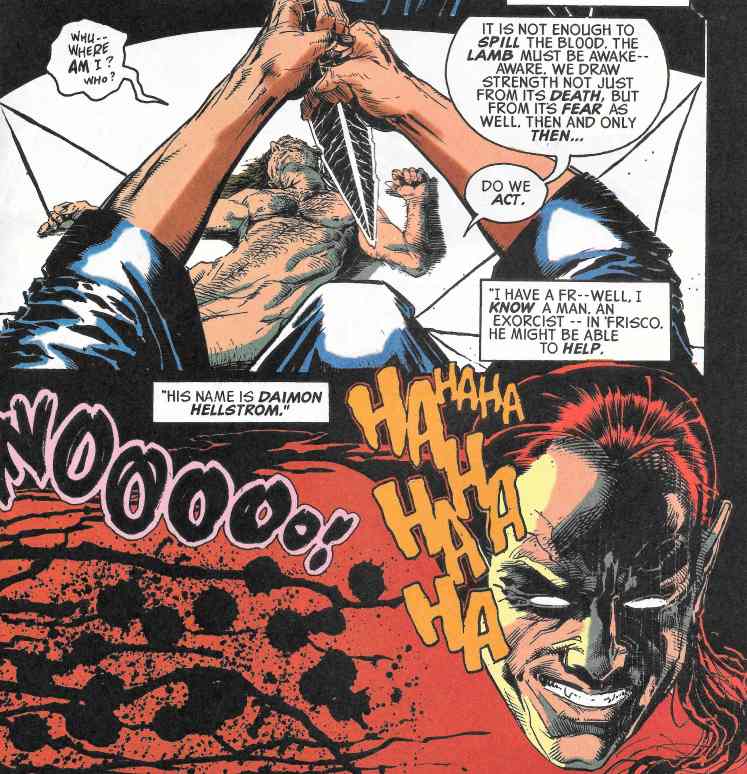 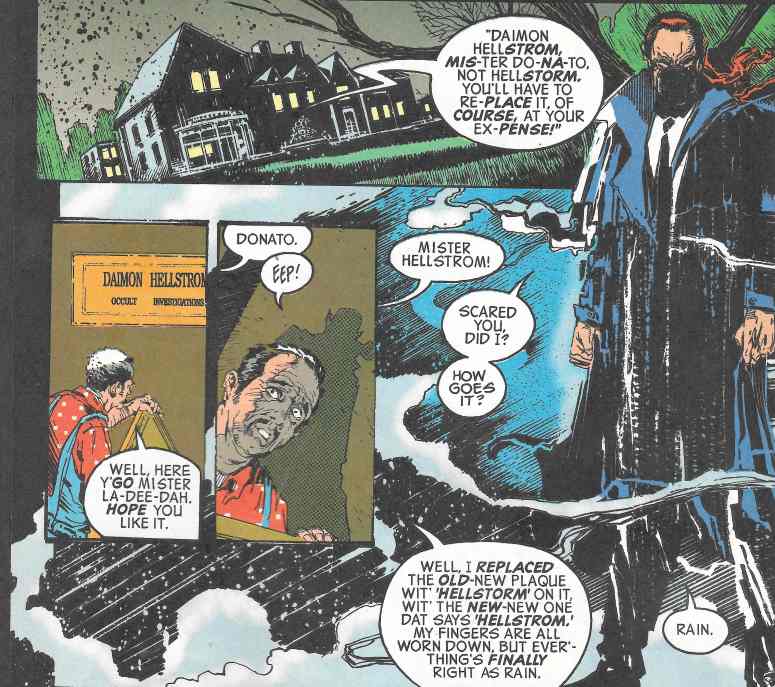 UNTIL a sudden storm crops up and Daimon, as changeable as the weather it would seem, decides to reverse the letters of his surname. That bothers me. If the character did it conspicuously, knowingly, as a way to avoid his past or detection or something, that says something about where this will be going. Where the series is aiming us. Instead this is a whim. A toss-off. A joke, if you will and it says the series and Daimon himself don’t have a clear direction. 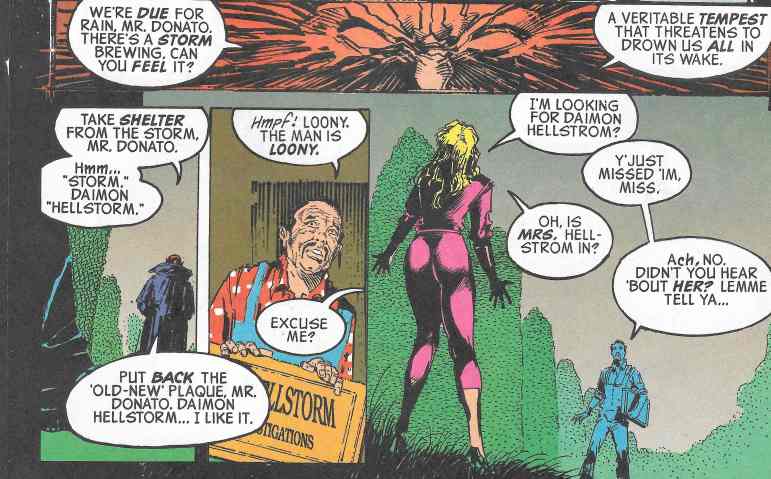 The ship is rudderless and floundering, is my point. And we are only on page 7, folks.

Next we have a nice old homeless woman get captured by the Black School for sacrificing and we have this hottie in a pink catsuit show up looking for Daimon at the nightclub he hangs out in called…wait for it…Helzapoppin! Which makes me imagine those extras from the Angel series doing breakdance moves from the 80’s. 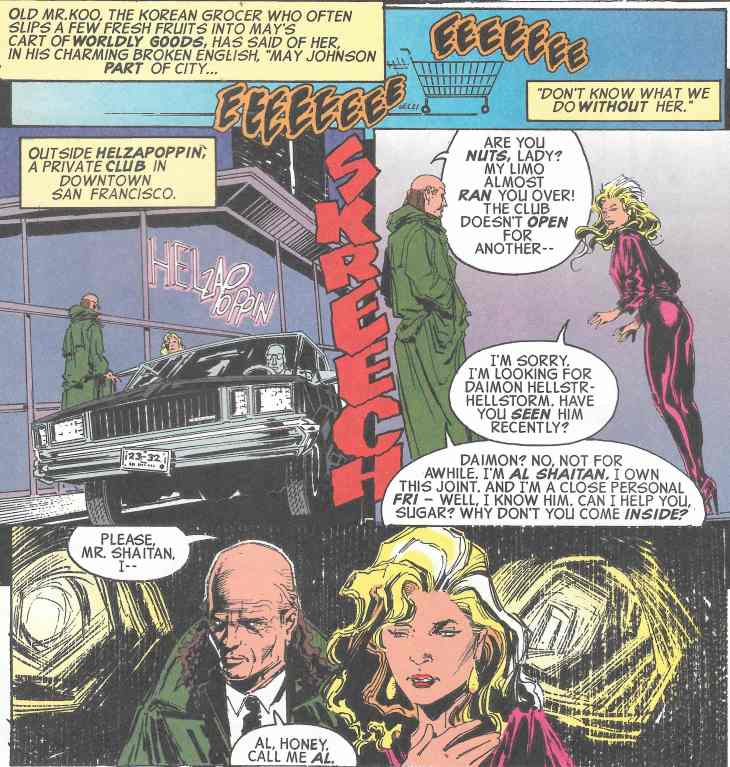 The old woman wakes up in a cage where she is tortured by…Daimon? Yes, it’s Daimon alright, but don’t worry. I’m sure the writer isn’t throwing out red herrings or anything. 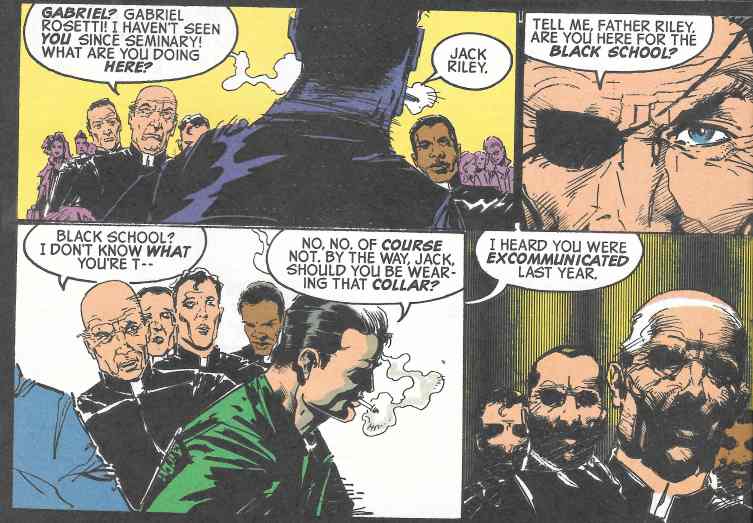 …that could have led to a fight scene or some interesting back and forth or a confrontation or SOMETHING, but instead we just move along to the blonde finally catching up to Daimon and asking for his help shutting down the Black School. He rebuffs her because again this leads the audience to think that Daimon is part of the bad guys in this issue. 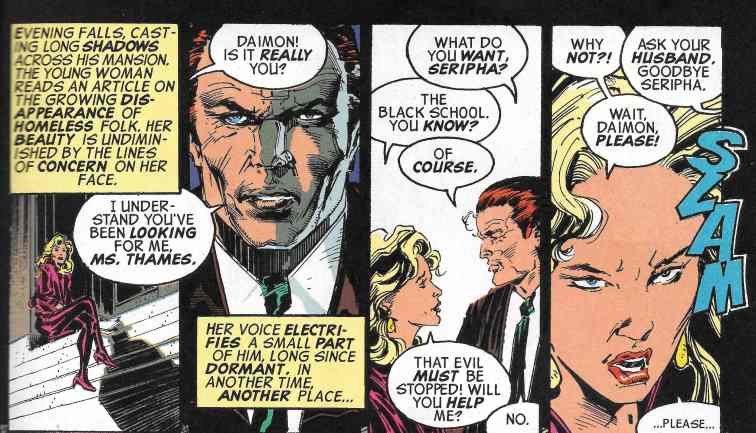 Directly after this, Gabriel makes plans to bust the Black School by himself as a figure in silhouette that looks like Daimon drives to the same location with an evil grin on his mug. Yeah, Blair is that good here that he can show facial expressions on silhouettes. Sad that all that effort is wasted on this particular story.

We suffer though the setup of the Black School cult about to murder the old woman, then Gabriel reveals himself by completely shredding his outfit (a little to literal there, Blair. We get it. He’s EXPOSED in a way that is dangerous, but seriously. His clothing isn’t made from tissue paper). He has no backup, so I assume he is done fore… 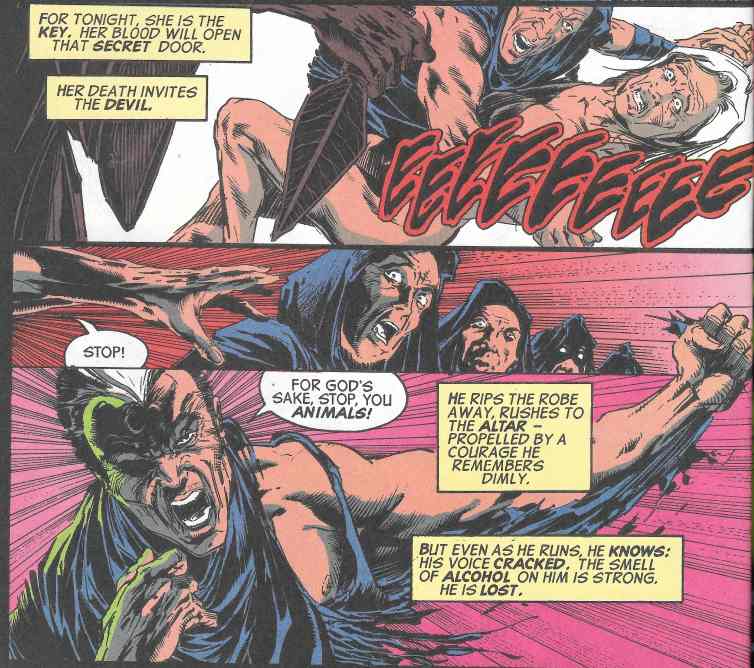 …but no, the cultist are all a bunch of pussies who run away and their leader is … 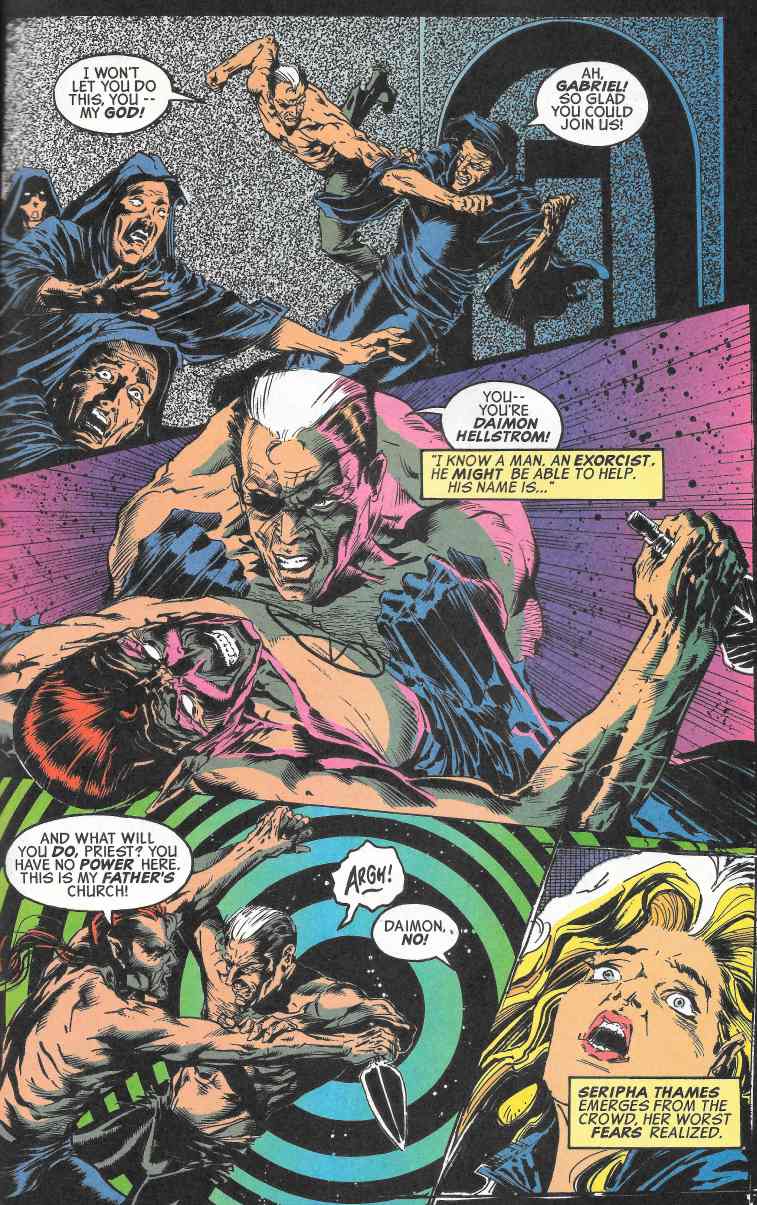 But it is, somehow. And he knocks out his wife, Seripha Thames (when did they get married again?), the woman who has been trailing him all this time, while preparing to sacrifice Gabriel. WHEN SUDDENLY!!! 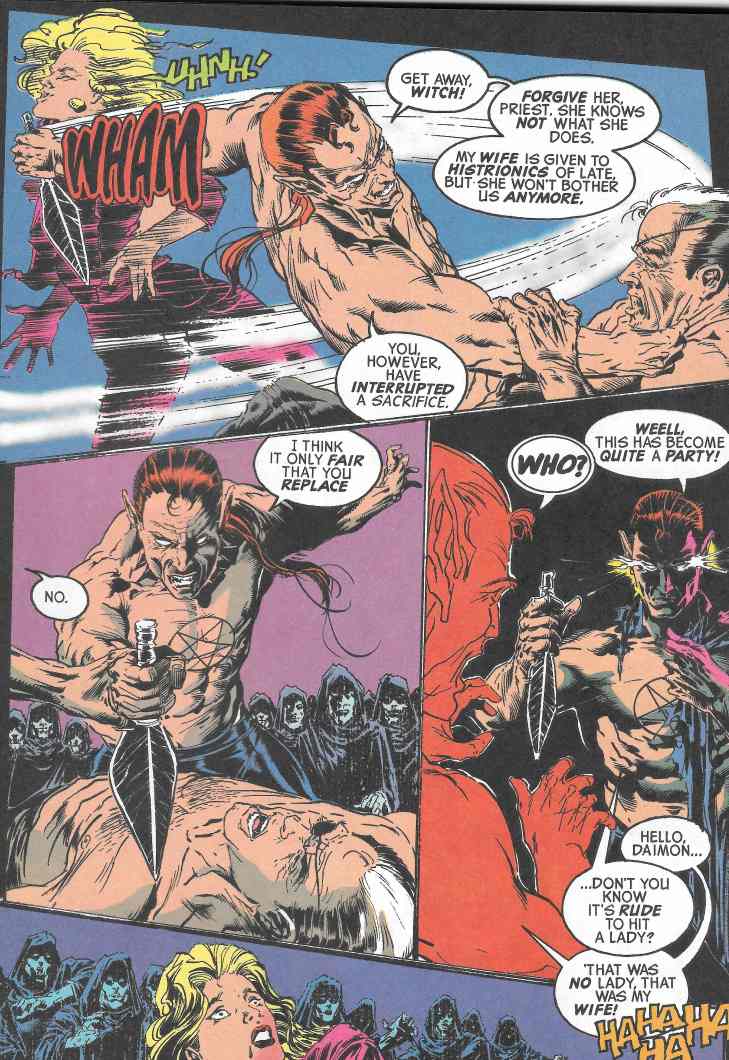 A different Daimon Hellstrom, this one going by the name Daimon Hellstorm, takes the knife from him and allows him to do a horrible, horrible joke at Seripha’s expense. And the audience’s.

Then he fights himself for a bit, which I will spare you, and then the good Daimon summons his trident and sends the bad Daimon back to hell. Which somehow causes the appearance of Daimon’s father, Satan. Except Satan looks a bit like… 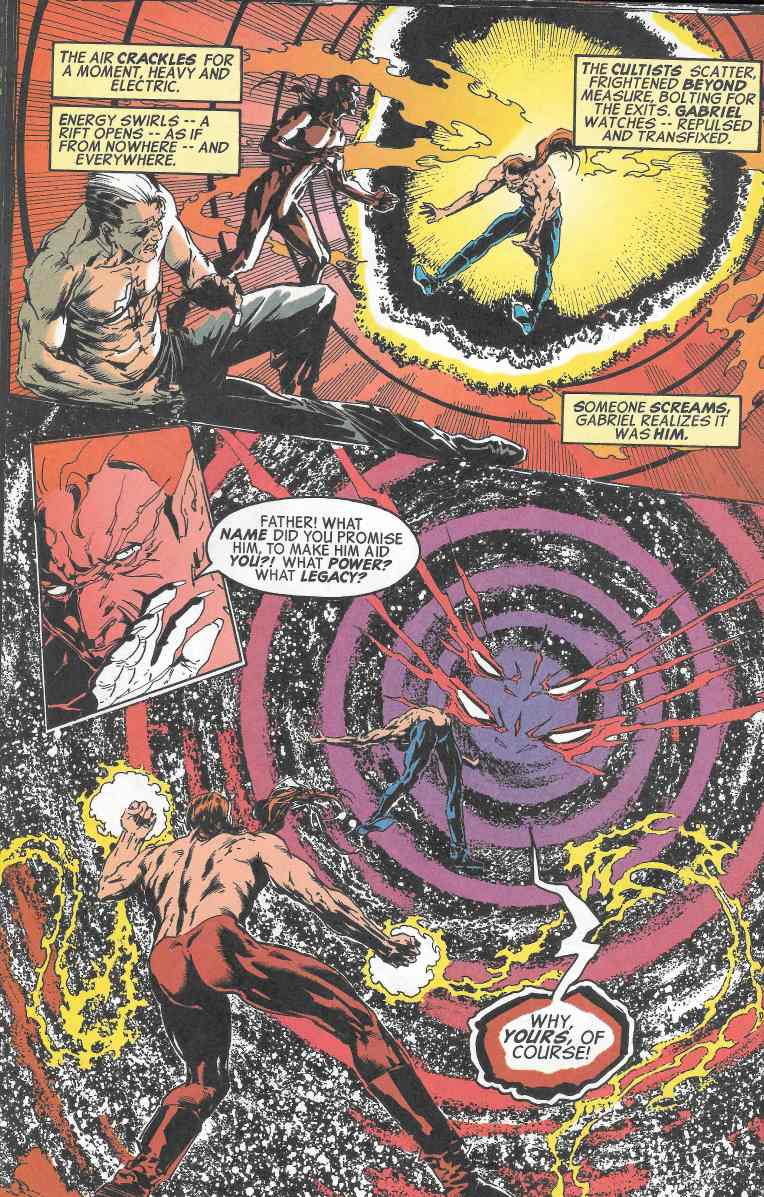 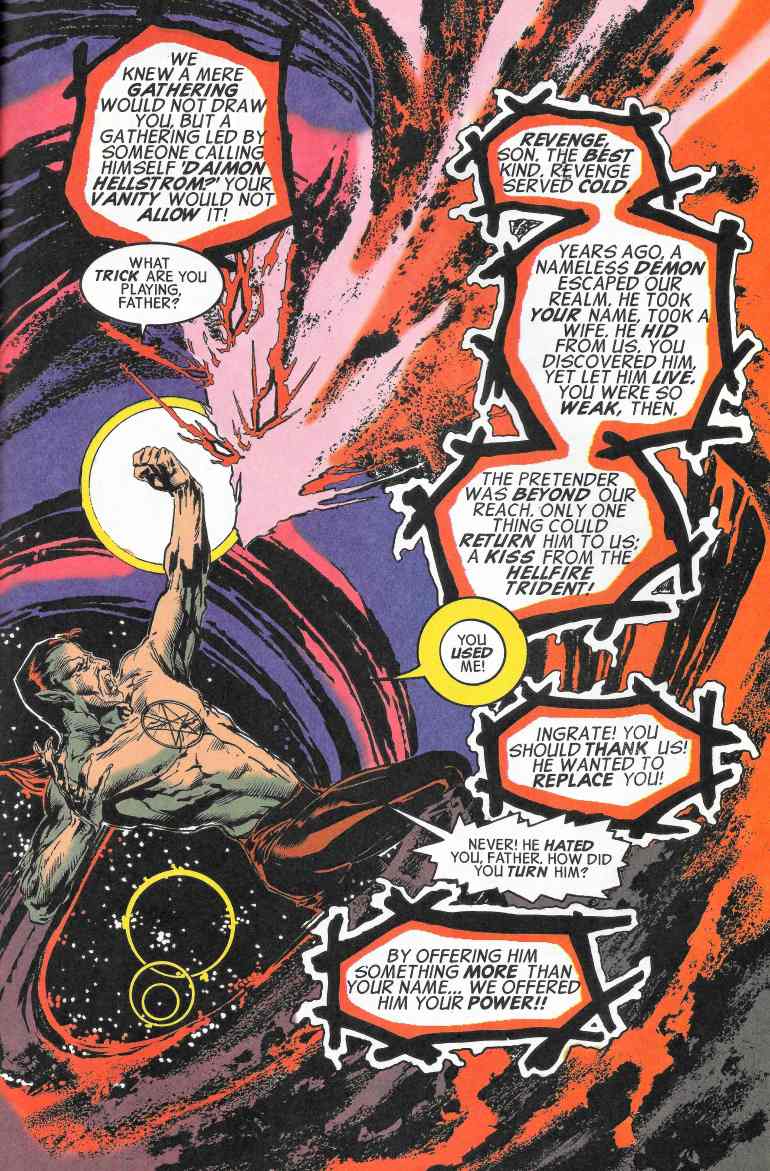 But there are some nice images here, even if the train wreck of a story goes right off the tracks at this point. Body doubles, twist endings which only make sense if you discount everything you know about the main character over years of development, not to mention all the side characters that really are only here to distract from the plot twist ending…Blair deserved way better. Just look at this double-page spread. 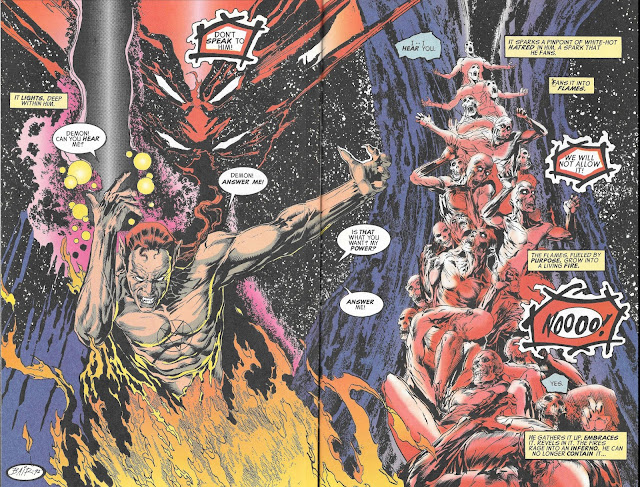 Instead we get weaksauce plot. But at least Daimon defeats Satan in the end… 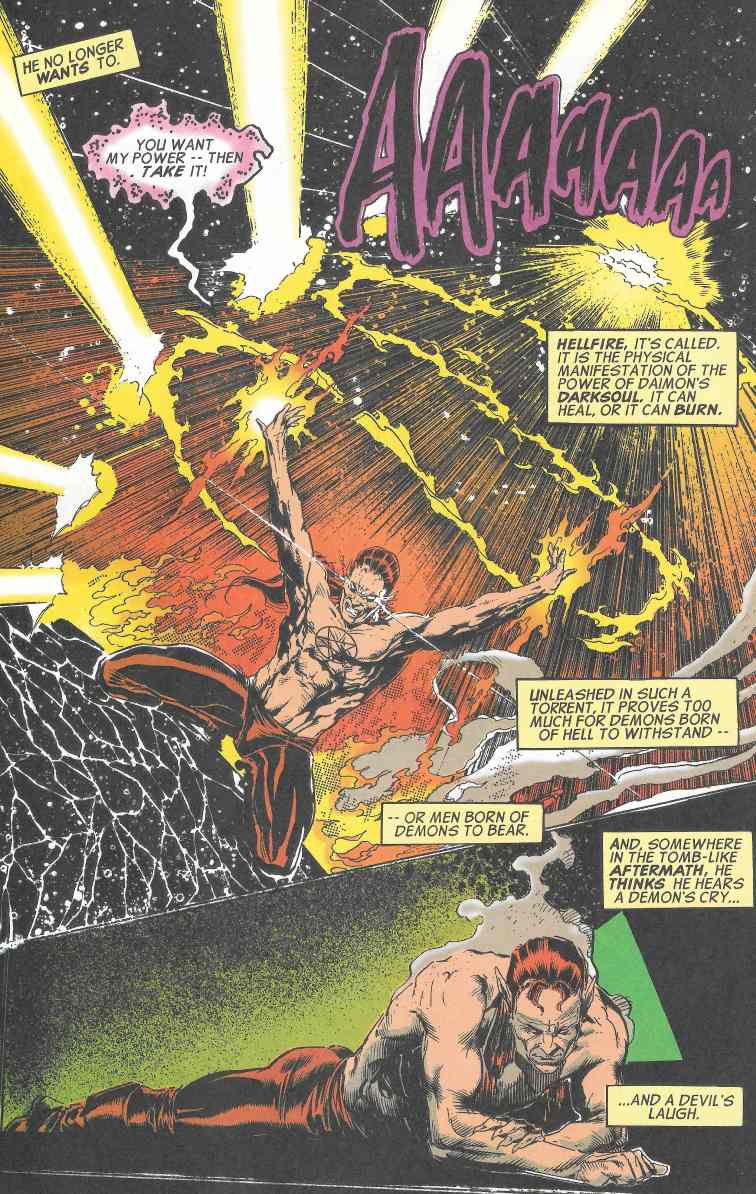 …and you’d think that would be enough for some people, but Seripha was married to the other, bad Daimon and she’s not all too happy that her husband has been banished to the land of ultimate evil. Possibly because it is hard to get alimony payments from him on time. 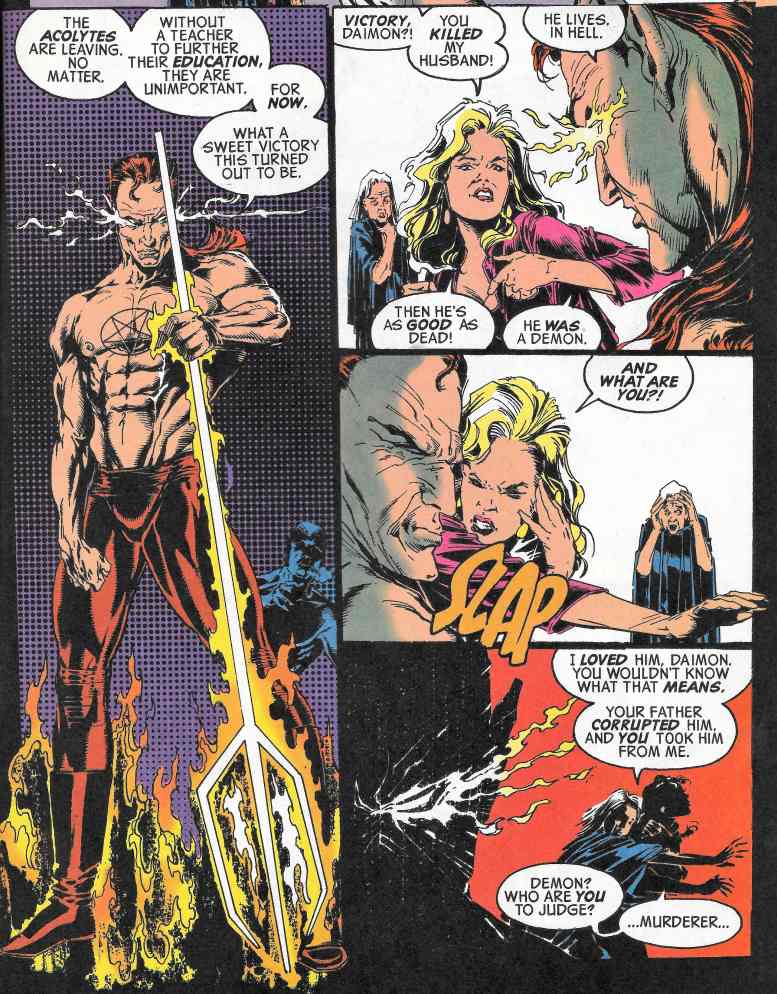 Gabriel meanwhile proves he is the audience’s surrogate, because he is JUST as confused as we are. 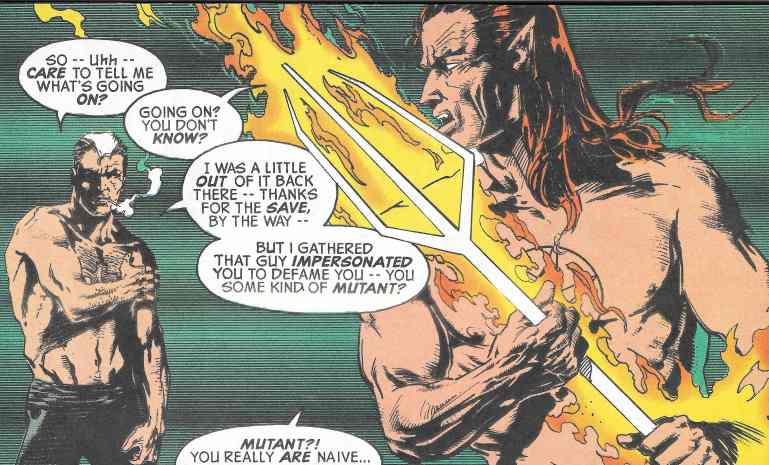 And that gives Daimon a chance to exposition the entire story to us. LAME. Don’t tell us. Never tell. Always show. Storytelling 101. 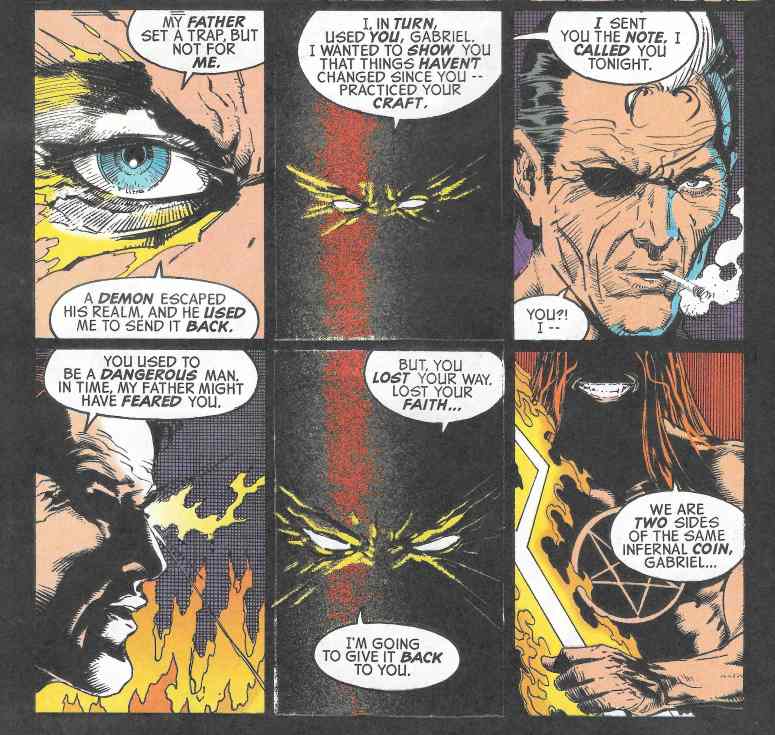 He then tells Gabriel that they both have turned their backs on their “Fathers” and flies off into the moonrise, or whatever.

What a depressing find. So much good art in service of such a bad story. Hard to believe that this itineration of HellSTORM would last a surprising twenty-one issues. Nieves was jettisoned after issue 4, Len Kaminski took over until issue 11 and then Warren Ellis made it last another ten. But from this start, I wouldn’t plunk my three bills down for Hellstorm: Prince of Lies.

Why would Marvel do this and what was the goal of this book? I have some theories about that tomorrow when we look at issue 2, guess starring everyone’s favorite Sorcerer Supreme.
Posted by SonOfCthulhu at 4:13 AM