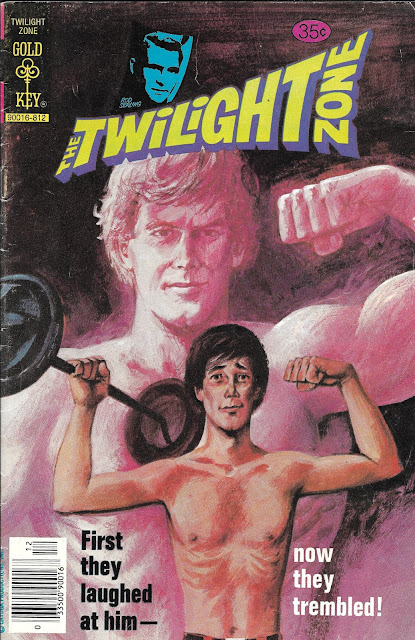 We look at a timeless classic TV Show tie-in

Rod Serling was a special kind of genius. He loved pulp adventure stories as a kid. When he grew to adulthood, he craved stories that resonated with the headlines of the day. Philosophical stories with themes about racism, society, war, government and moral choices were his passion.

As a prominent writer for television, he found network censorship his bane. His dramas were constantly hamstrung by sponsors and networks. He found that “To say a single thing germane to the current political scene was absolutely prohibited.”

So Serling looked outside the standard drama. He crafted his own teleplay called “The Time Element” in 1958 and sold it to the network as a possible pilot for a weekly anthology series. It was his first science fiction story.

The Time Element did extremely well in its television debut on the Westinghouse Desilu Playhouse. Well enough for Sterling’s twisted anthology series to become reality. Serling pulled in writers to help script episodes for him, veritable giants such as Charles Beaumont, Ray Bradbury, and the masterful Richard Matheson.

Frequently the series would use the science fiction framework as a vehicle for social or moral commentary, evading the network and sponsor censorship. In this way, like Star Trek after them, they became more than just a way to entertain. They became a method of persuading an audience.

I grew up on them, as many here would attest. All 156 episodes. My favorite would still have to be “Time Enough at Last” with Burgess Meredith as the timid bank clerk and sole survivor of the human race. I’d love to hear yours. I’m certain everyone of my generation has one.

As for comics, Dell had the license initially and came out with four issues. Then a few one shots before it transitioned over to the Gold Key side of that shop. From there it received a new number 1 and a run that would span 92 issues and 17 years. Now publishing had the license in the 1990’s and ran new stories. Remakes of a handful of episodes came out in 2008 under the Savannah College of Art and Design and Walker & Co. And in 2013 Dynamite gave reviving the series a try with J. Michael Straczynski and Guiu Vilanova on board. Currently the license sits idle but I’m certain that’s a temporary thing.

Jordan Peele has a revival of the TV show slated for next year (the third revival since 1964), so I expect new comics to come along any minute.

In the meantime, enjoy this blast from 1978, as the Twilight Zone comic predicts the dangers of steroids, placebos, and building lifelike human robots…

Our first story out of the gate is this little piece that takes those Charles Atlas “The Insult that made a Man out of Mac” ads and reformulates them a bit. If you don’t remember the advertisements, let me throw one up for you. 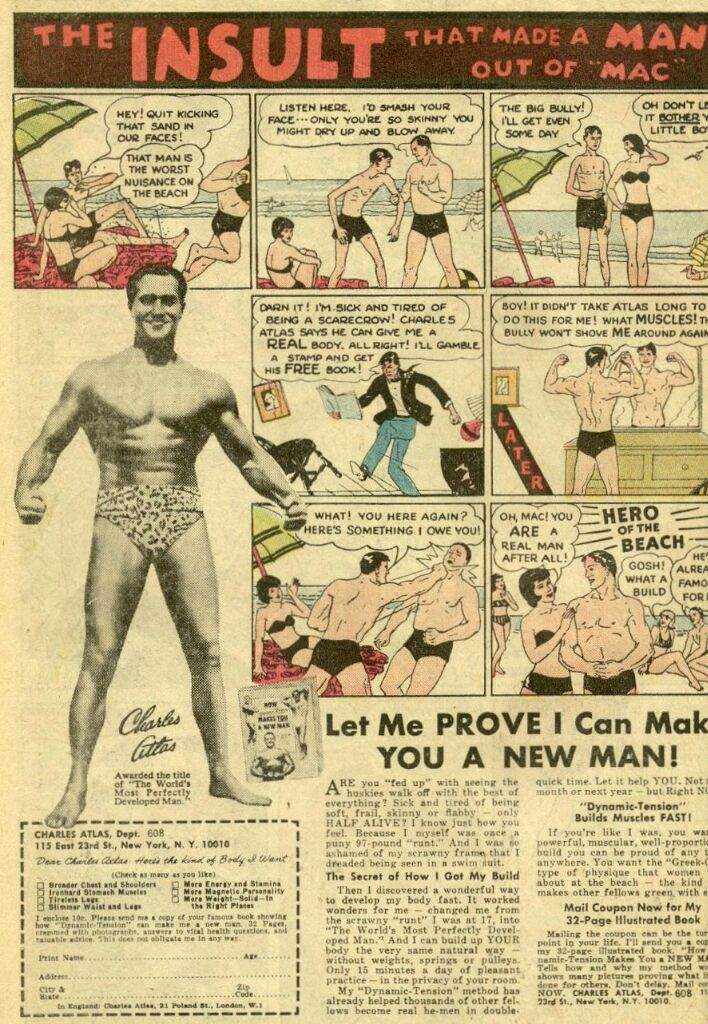 I love this as a story concept and how it is told. Feels right to do this inside a comic book, too. It's the same panels we are all familiar with, only now with a slight more twisted ending. Let’s get started.... Marvin Mannerheimer is enjoying a day at the beach with his girlfriend, when just like in the ad, some jerk happens by. Here’s sand in you sandwich, Marv. This guy is a real lout tossing the picnic blanket over Marvin in the end.

He’s made the butt of the joke for the entire beach to see, although this affects his girlfriend Shirley’s feelings for him not in the slightest. IN fact, when Marvin does start getting riled up, Shirley seems less attracted to him. She wants a calm, unflappable guy. 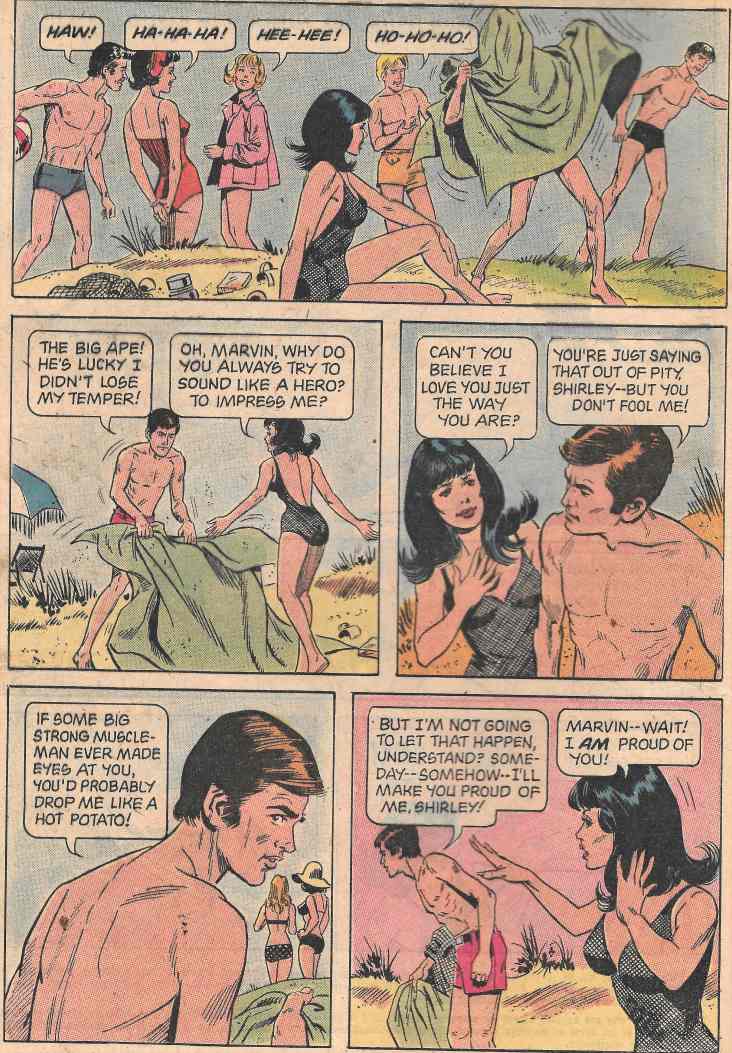 And true to the Charles Atlas story, Marvin gets his answer to how he can be the “Hero of the Beach” for just a mere $5. All this courtesy of a flying advert that hits him in the face. It touts the Magic Muscle Builder that works miracles in minutes. Sounds like steroids to me, or at least their metaphorical equivalent.

Marv is sold, however. 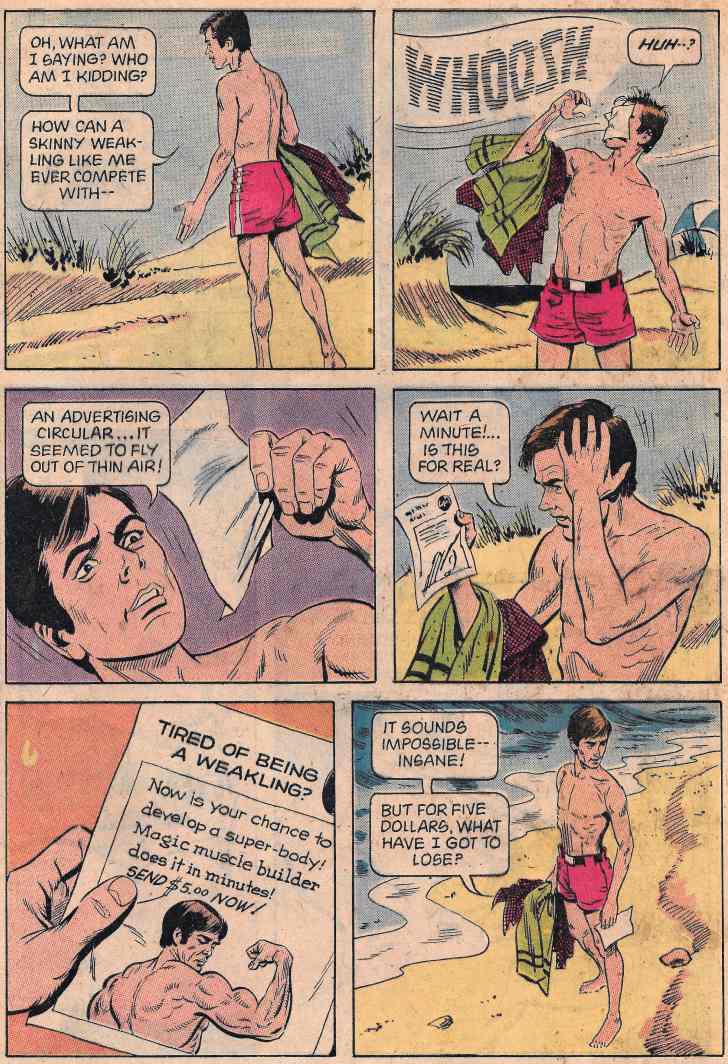 The resulting package he receives makes him less enthusiastic. It is a lightweight barbell that he doesn’t have to exert any strength to lift. 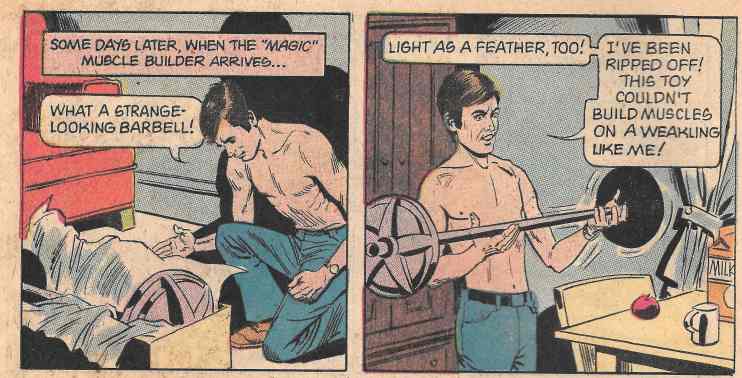 The flying flyer did mention “magical” transformations and that’s exactly what he gets. A few fake (and poorly executed – just look at his hand placement) curls and he’s got the upper bod of Arrr-nuld. 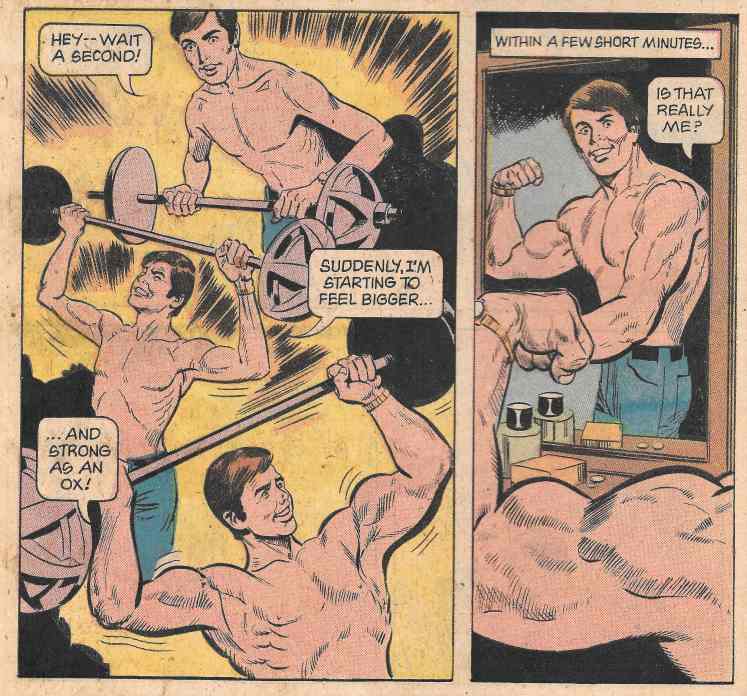 The weird thing to me is that this was exactly the line being sold in those Charles Atlas ads. It never mentioned how many hours of painstaking work  maintaining a muscled physique would require. In the ads it worked like magic. Poof! Kick around some furniture and mail a postcard. Bingo! Instant muscles in the mail.

First off, he heads to Shirley to show off his new physique. He notices other women looking at him on the way and gets a little inflated ego. Shirley reacts like any sane person would, suspicious of how this occurred. And remember when I said the word steroids above, well note that Marv hurts his girlfriend trying to impress his wishes upon her. 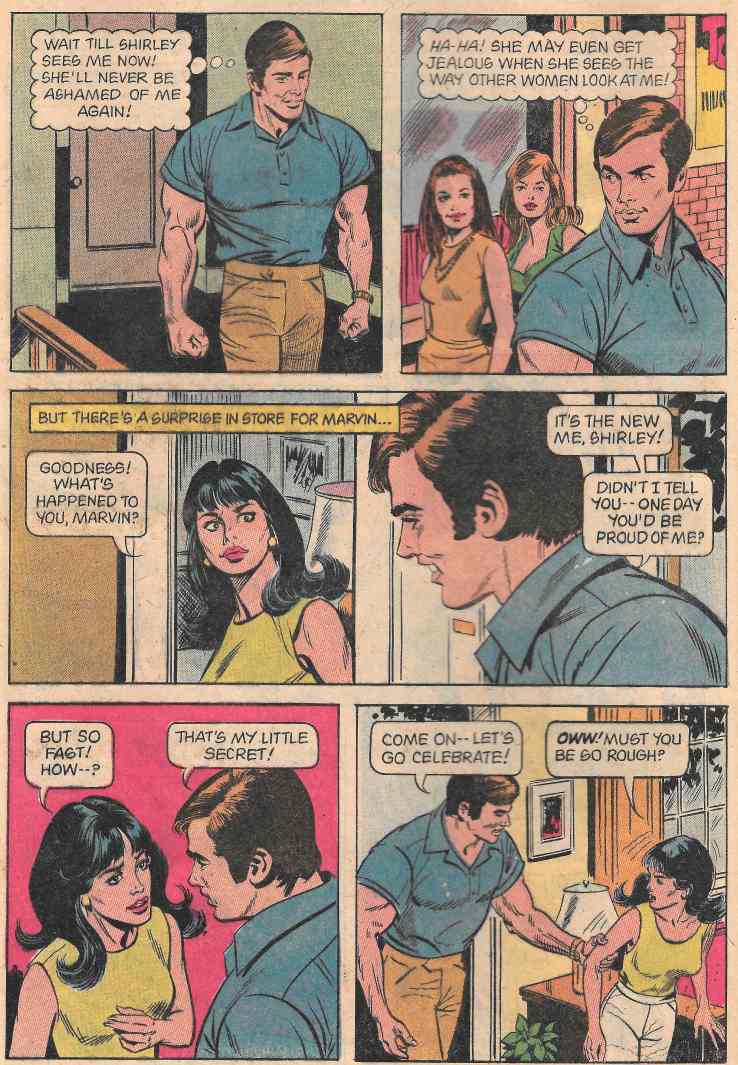 The pair go out dancing, but Marv is no longer the sweet, shy, considerate guy Shirley loves. In fact, he has what amounts to a roid-rage incident when some poor schlub bumps into him on the dance floor. Shirley notices his change in demeanor and calls him a bully for good measure. 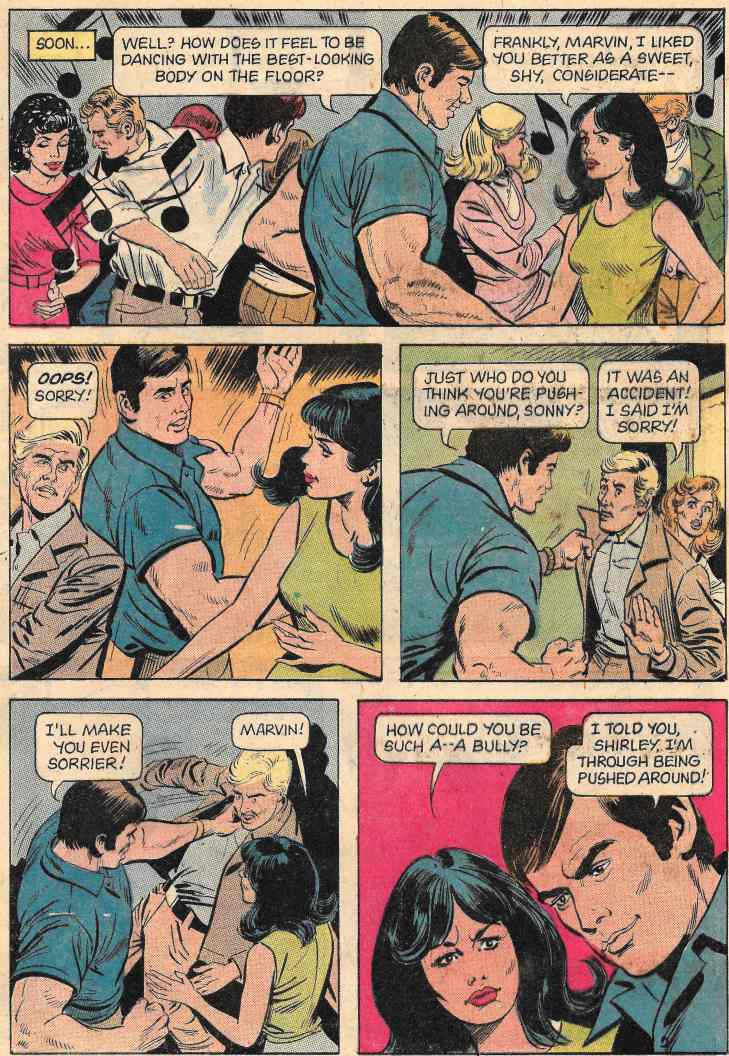 She leaves him. A few other girls come on to him, but Marv needs time to think. Too much has changed too fast. After a night spent alone, wandering the streets, he comes to his senses finally and heads back to Shirley’s to apologize. 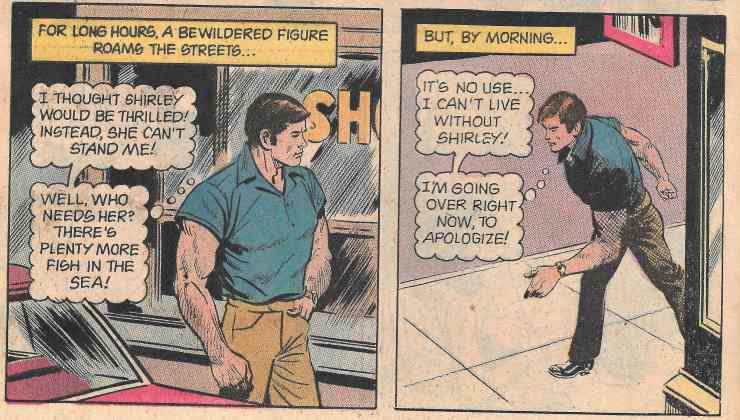 Unfortunately, his body is still expanding. He has monstrous strength and a look to match. People scream and avoid him. He even accidentally rips the door off a cab. 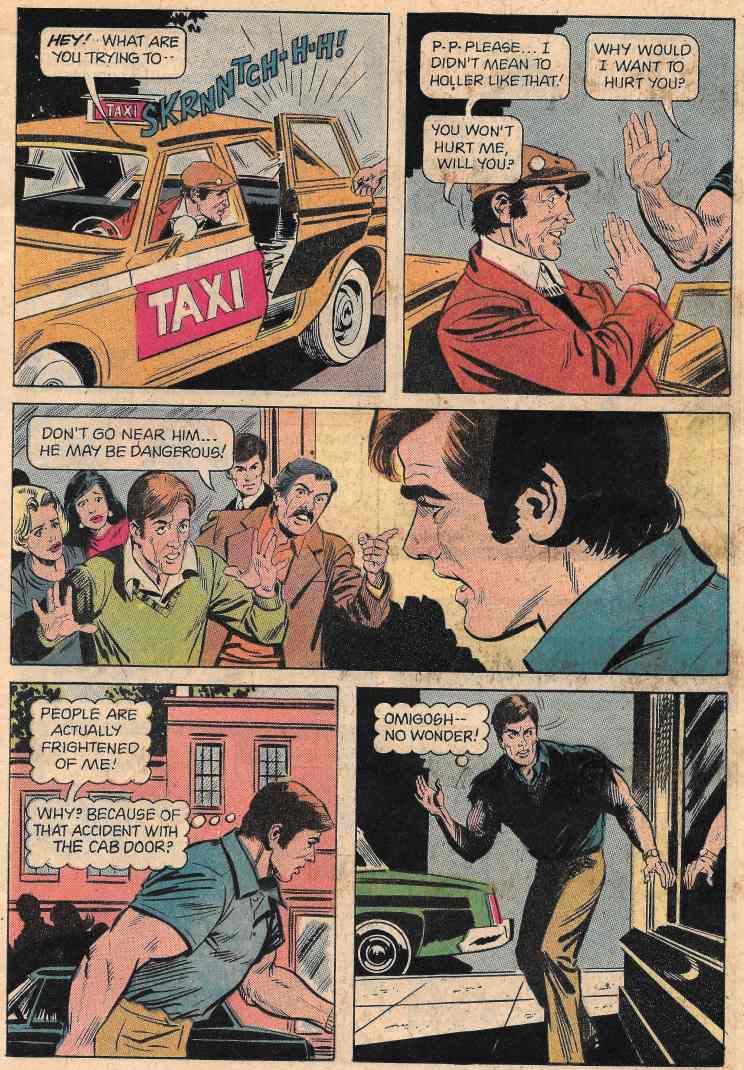 Instead of going to Shirley’s he rushes back home, tearing through doors like the out of control freak he has become. (see: seroid metaphor) 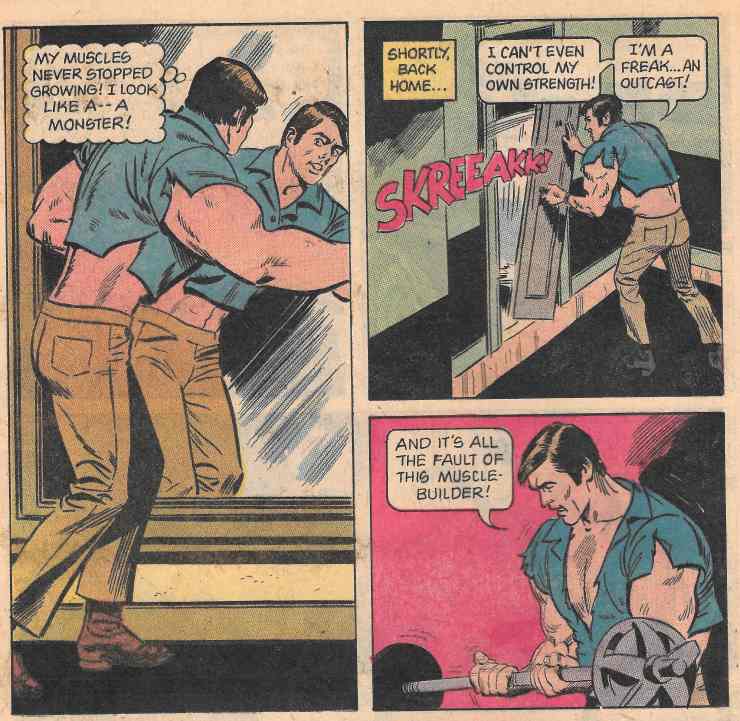 Once there he breaks the Magic Muscle barbell in two, an act that reduces him back down to his less muscular self. 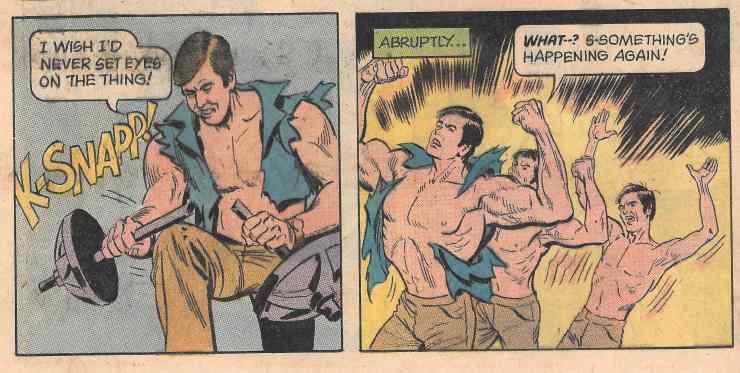 And in a happy ending, he goes back to the beach with Shirley. This time ending conflicts with intelligence instead of fists. 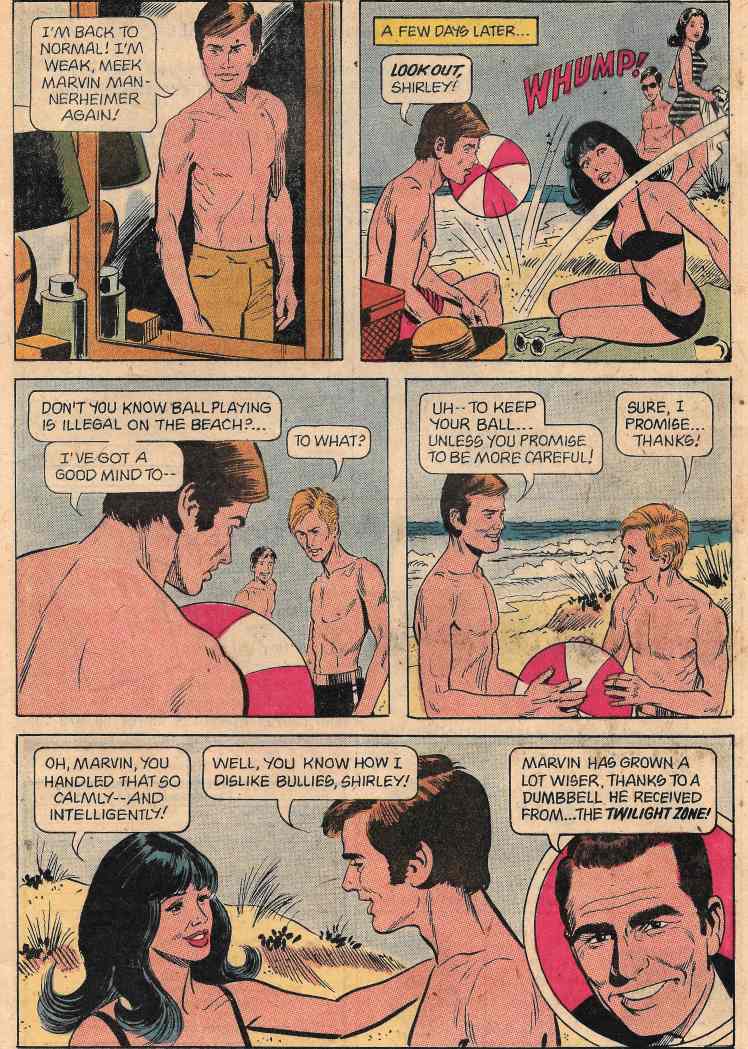 Loved this one! Such a wacky bent to those ads but given in a serious way. Being the "Hero of the Beach"  means different things to different people.

Moving on to our second story, we have Farewell Performance, which is a murderous little ditty about the power of the placebo. We begin with Hamlet... 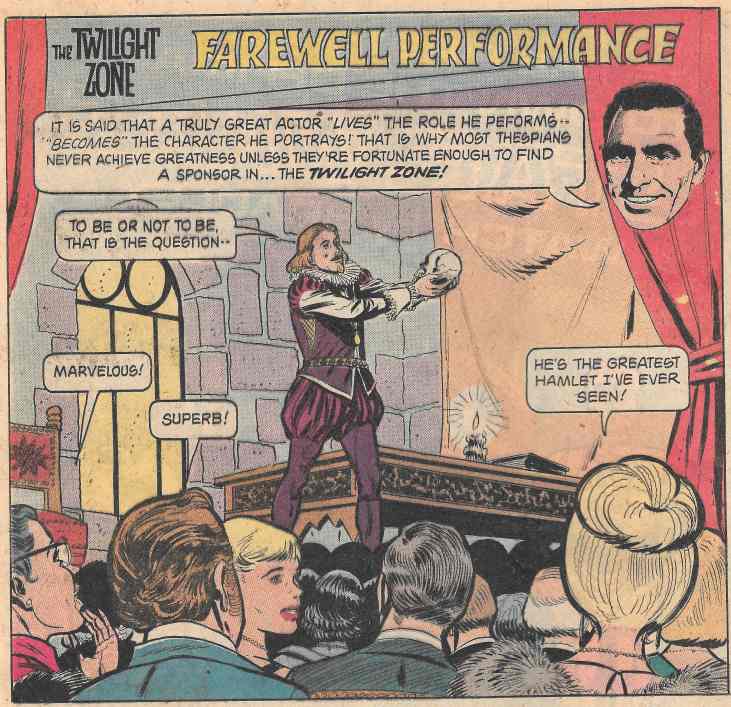 Our Hamlet actor friend being hailed as the greatest actor since Nicholas Cage has a secret. This backstage cast member Archer clues us in that he wasn’t garnering rave reviews just a few weeks ago. The suddenly he’s super-good at acting and everyone is loving his performances.

Archer decides not to let this “Ham”-let out of his sight until he figures out his secret. Before the actor’s next performance he spies him taking a drop of a strange liquid… 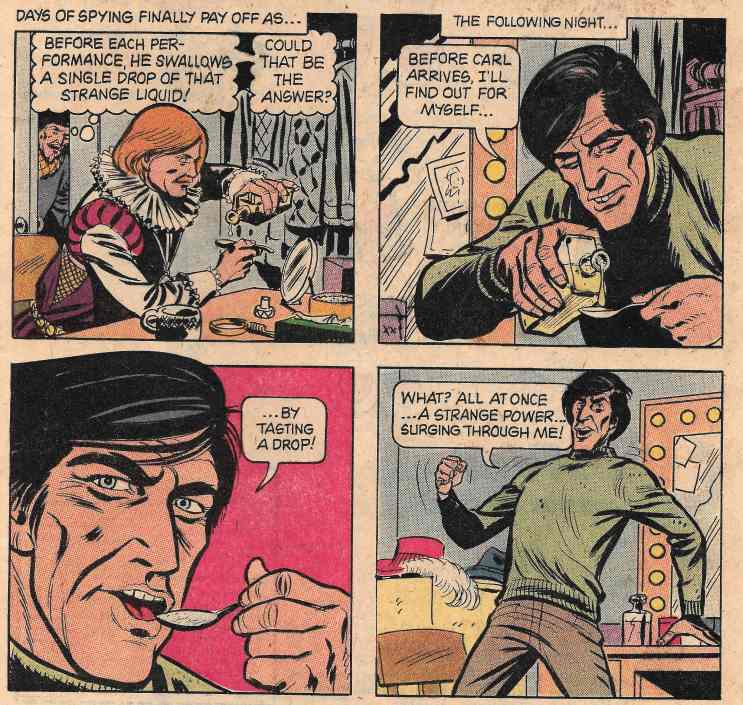 …and trying it himself realizes his castmate has what amounts to bottled talent.

Archer is caught in the act, as it were, and asks our lead actor where the potion came from. The answer is an old woman, which we can interpret to mean “witch.” The potion gives you the “life-force” of any character you are set to portray. 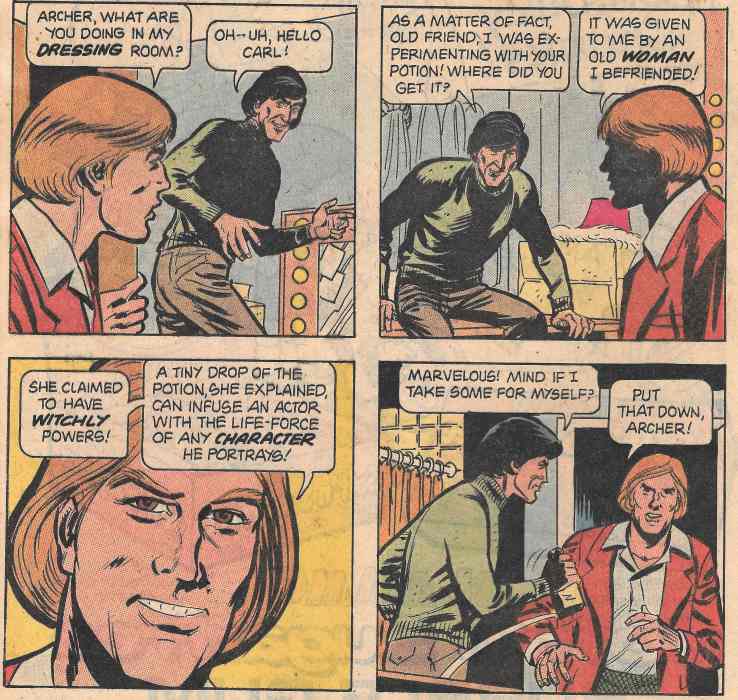 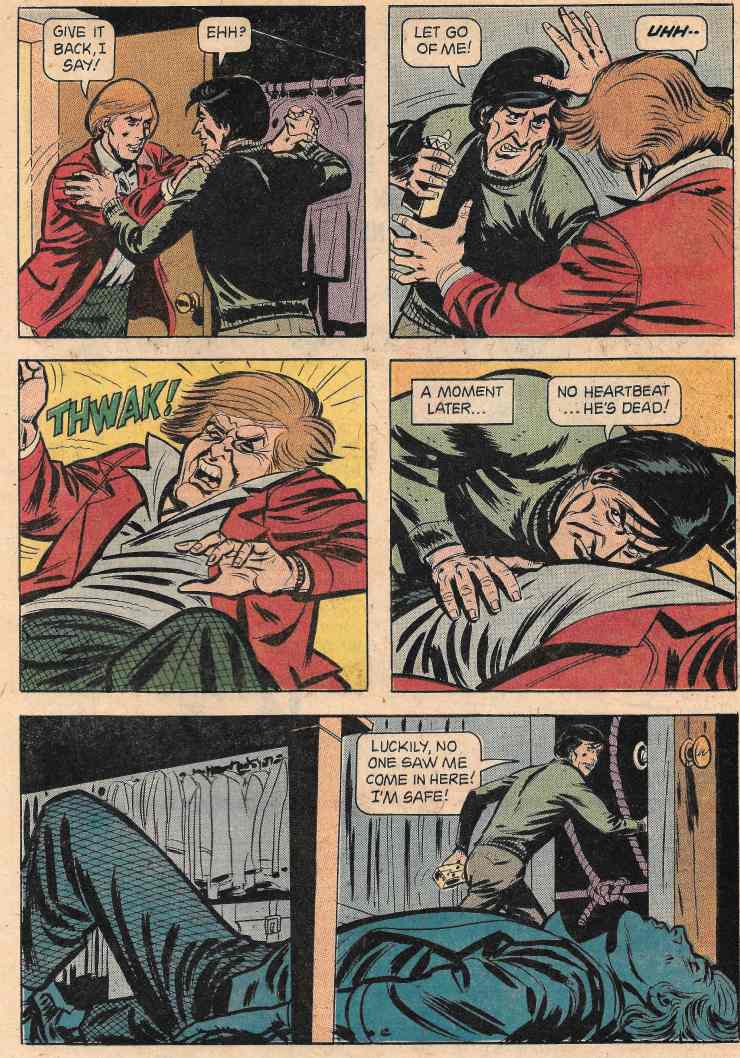 …which causes quite a scuffle and ends with him bashing his head in from a fall. Archer realizes he’s dead and steals the potion to make his own fortune.

Once the body is discovered, Archer moves in quickly to secure top billing, knowing that the potion will allow him to give the performance of a lifetime. 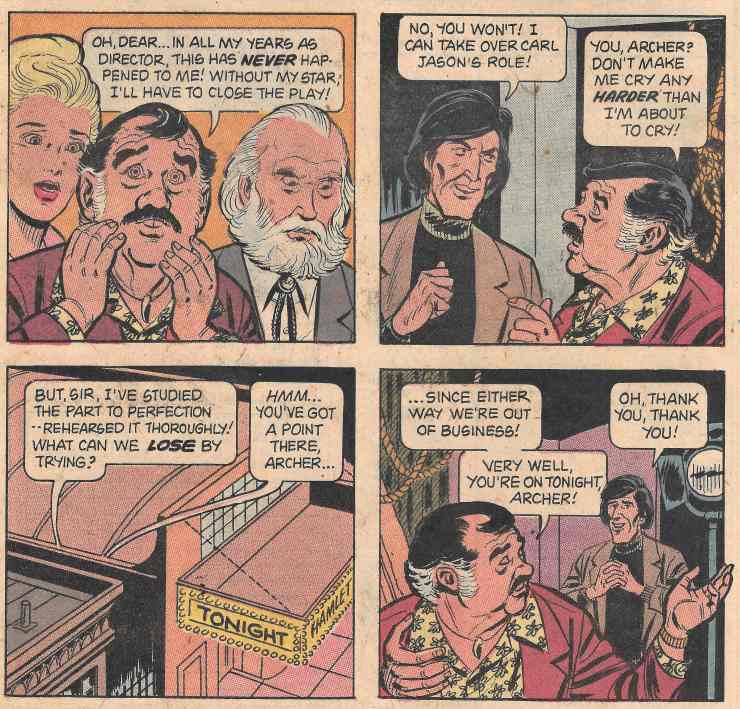 And of course he is amazing on stage, the power of the elixir allowing him to bring the role of Hamlet to life. What follows is a whirlwind of other plays all over the world. 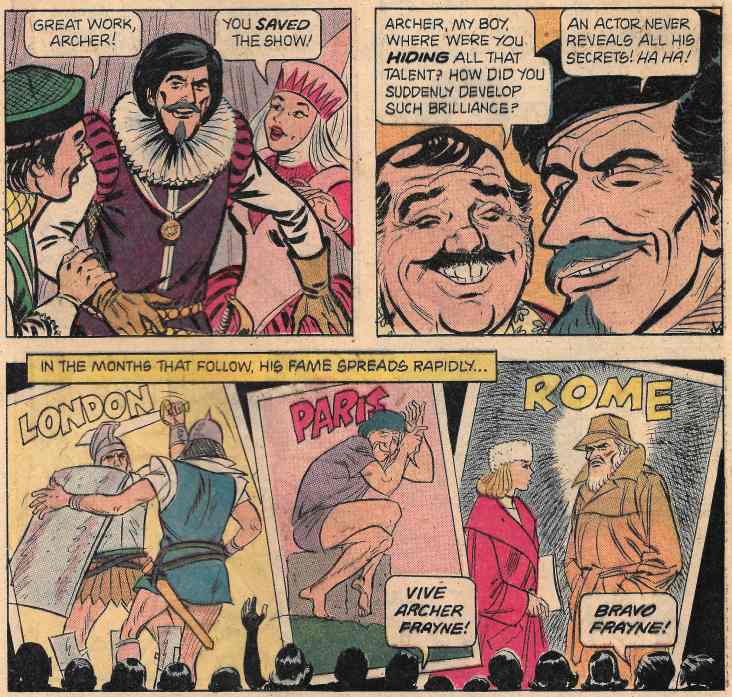 His big break comes while they are performing Julius Caesar. A movie casting director is in the audience and might offer him a part in a big film if he wows them. Archer seems a little nervous. 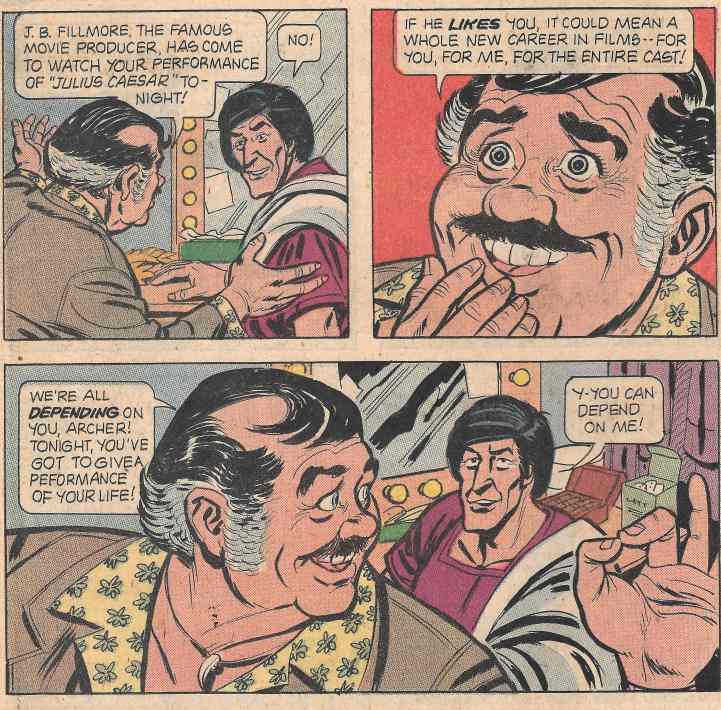 And being nervous, he decides to down just a little more than normal of the elixir of great acting.

His performance is going amazing! Better than that! Spectacular! The audience can almost believe that Archer IS Julius Caesar. 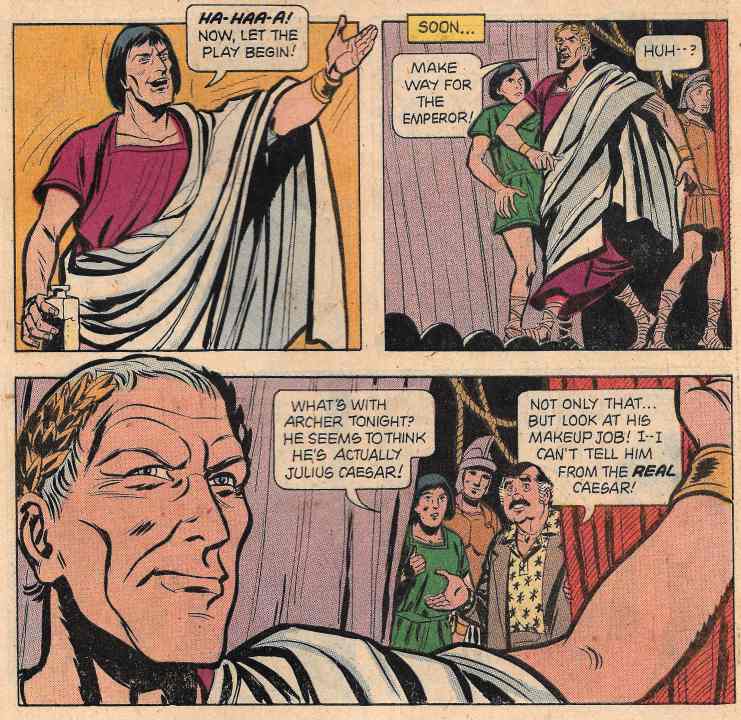 Which leads to a horrendous third act. Because having Caesar’s life force in THIS play means accepting Caesar’s fate at the end. I mean, it’s not called one of Shakespeare’s greatest tragedies for nothing. 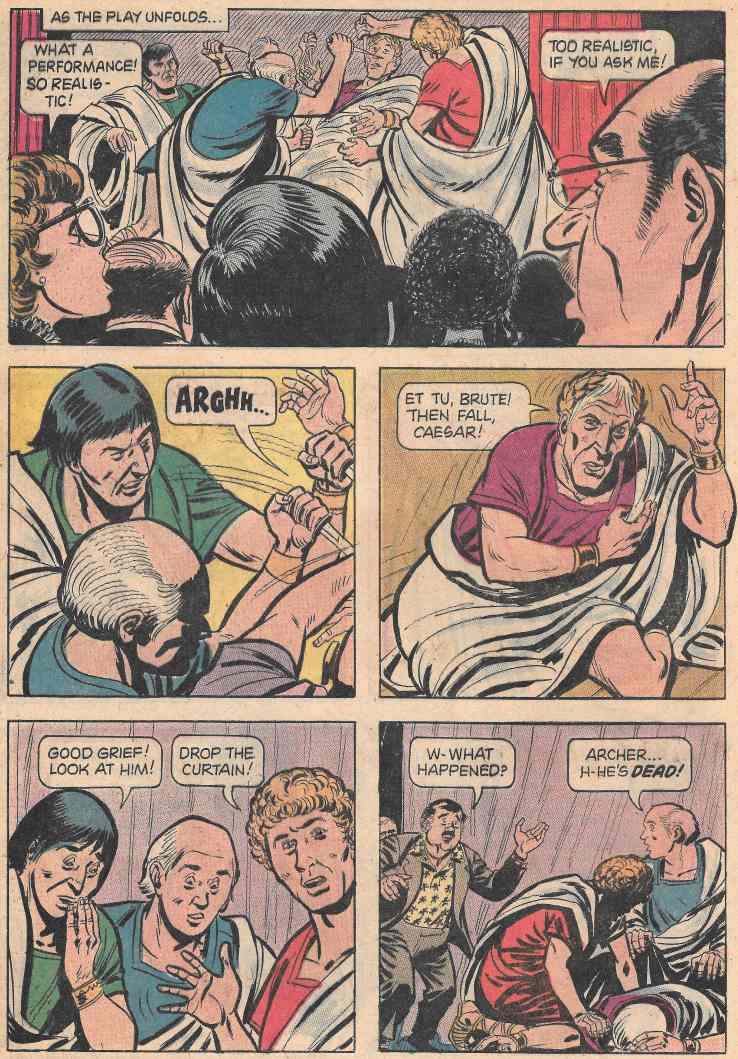 So Archer dies, his need for superstardom and a bottle of wishes dooming him to an early, ignoble death. And as for the potion? 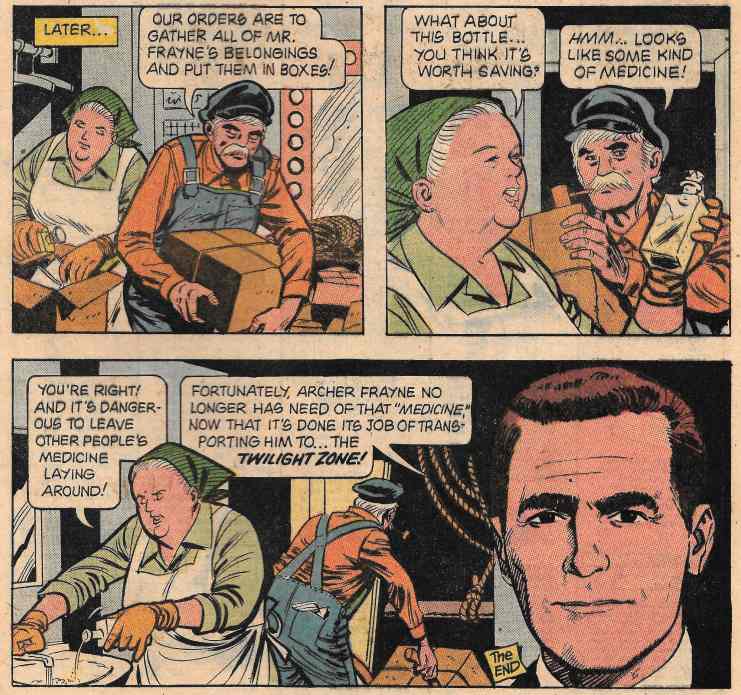 Down the sink it goes.

With two nicely done tales, the book should really wrap it up here. I mean, I’ve gotten my worth out of it. But no. Twilight Zone tried for a trifecta, bless it’s heart. Even though it only had two pages left to go. What ends the book is kind of an embarrassment…

Page one shows Teri Deere wrapping up a concert in a huge venue. She is adored by her fans. Her manager however is an older gentleman who drags her off to the limo as soon she exits the stage. He appears overly controlling and kind of an asshole. 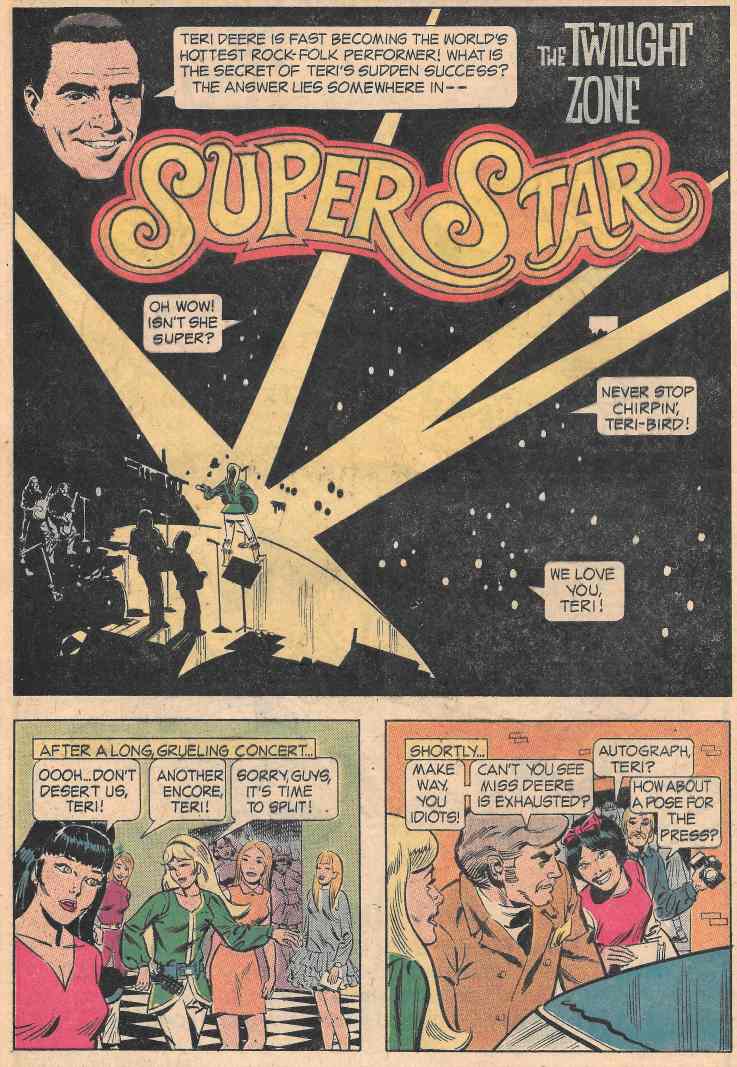 On the drive home to the estate they share, Vernon the manager, who we learn is also her Father chides her for staying on stage so long. He worries that she will run out of energy. Terri reminds him that without her, he’d still be a nobody.

Once inside, the Father hooks Terri up to all kinds of machines and we learn that she is a robot and he is her creator. She asks why he doesn’t get rid of her if she is so much trouble?

And his answer is that he has fallen in love with her, his creation.

You are seeing every panel of this last “story.” I put that in quotes because nothing about the constitutes an actual tale. It is a writing prompt illustrated in two pages. If the story had about four more pages that explained how the Professor/Daddy/Lover/Stage Manager dealt with his Creation/Daughter/Significant Other/Talent from this starting point, maybe it would be a story. What if her power fails during a concert? What if she falls for another man? What if his love for her is discovered somehow, and the press makes big waves of the Father-Daughter incest angle? What if the sales of her albums start to slip? Or people notice she isn’t aging?

This shouldn’t count. It’s not complete and shoved in just to fill two pages. Sadly this is where we end this Halloween. Two great tales and one…meh one.

Do me a favor? Post your favorite Twilight Zone episode in the comments? I love hearing from my readers and this is a great night to share some really amazing spooky stories.

HAVE A GREAT HALLOWEEN EVERYONE!
Posted by SonOfCthulhu at 4:23 AM