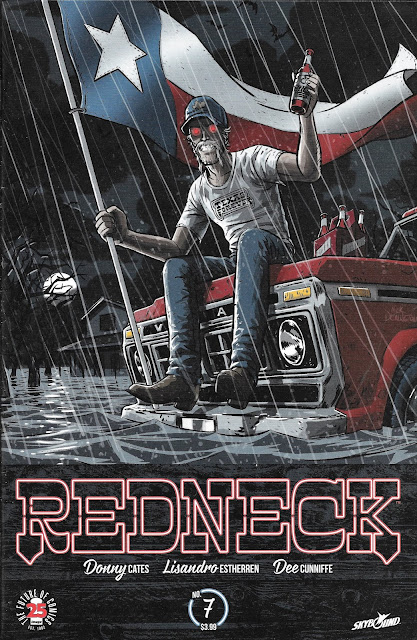 The vampire hicks live among us

Donny Cates has a huge winner on his hands.

That winner is the story of an east Texas family of vampire ranchers, the title of the book “Redneck” serving as both a designation of their small town, southern culture and the fact that they drink blood to survive. Vampire hicks and their adventures after human society final comes crashing in to their quiet, insular lives and community. Brilliant. I should run down to Austin and thank Cates personally for this one.

Less easy to do would be to hunt down Lisandro Estherren and Dee Cunniffee for their participation in this. Estherren pencils add a simple elegance to horrible east Texas scrub, or as Cates describes it “he draws ugly really beautifully, if that makes any sense.” It does. His renderings of the Bowman clan resonate with a gritty honesty of kin brought up under the heat of the Texas sky, living on the dirt of the dry panhandle soil. And while we are on the art, you have to mention Cunniffee’s color contributions. They give the book the splash of odd hue that meld an East Texas sunset with the fantastical neon beer sign glow surrounding the mythology of redneck vampires who’ve been alive since before Texas was a state.

Sadly, I’m late to this party. I’ve seen the books that came out of Image comic's blind box. Watched as so many people showed off their copies of B&W variants of Redneck like proud parents showing off a newborn. Variants are great and all (okay, this isn’t my stance, but someone out there likes them), but you don’t see every variant being touted as the second coming. Not unless the book it is attached to is a popular, high selling title with a growing fan base and a penchant for appreciation in value.

And I believe Redneck ticks those boxes.

Certainly, the back issue bin hasn’t been rife with them. When I found this issue it was an insta-pull, knowing a little about the series and that it would fit in with my Halloween Post-A-Day fluff. It didn’t matter that it was seven issues in, which meant I’d be operating at a severe handicap. That’s a crapbox standard. SoC never gets to read a complete story.

Still worth it, in my opinion.

We should dive in to the issue here, so you can see what I’m talking about. If you plan on reading Redneck, there are probably spoilers in this issue. Go in forewarned of that. Best you set this one aside until you go through the first trade. If you are curious and want to see what the fuss is about, come with me and let’s meet the Bowman’s.

The background to this book is that we have the Bowman clan, who you will meet shortly, an insular East Texas family of vampires. They’re ranchers and have been living for decades taking blood from their animals and smoking the meet to sell at the bbq joint run by their familiars in town. They’ve kept to themselves, up until issue one.

Then all hell breaks loose, and they go on the lamb so they aren’t discovered. And no, I don’t have those first few issues that chart this course. Sounds like a great thing to read though, so I will be picking up the trade later.

What we do have is the family in hiding. They are surviving, not thriving. And right now food is scarce. Scarce enough that they are competing with rattlesnakes for wild boar blood. The narrator ruminates that while the South may be cursed, Texas isn’t. No, by his estimations Texas is… 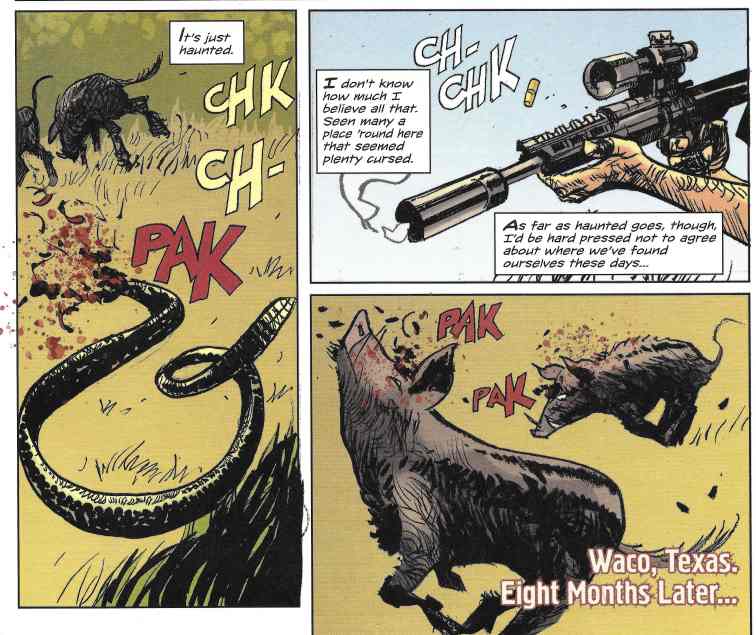 The marksman is the mute vampire who is called “Evil”. Unsure of the name of the other vampire, but I think it is Phil. Character is important in this. There is a pecking order to the family and people follow the leader. This issue explores that family loyalty dynamic set against the backdrop of a world that would kill all of the Bowmans as monsters if it had a chance. 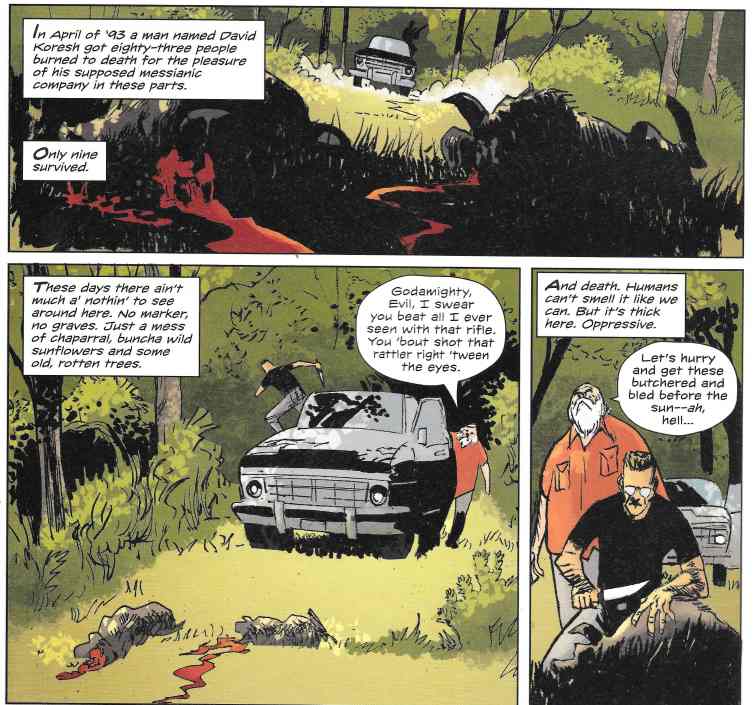 The message is clear in these first three opening pages where the pigs are snakebit but have to used to feed the family anyway. The world is poisoned yet the Bowmans must make the best of it. And the parallels to David Koresh’s fate links so closely with the prior arc concerning Sulphur Springs that we catch the implications instantly. 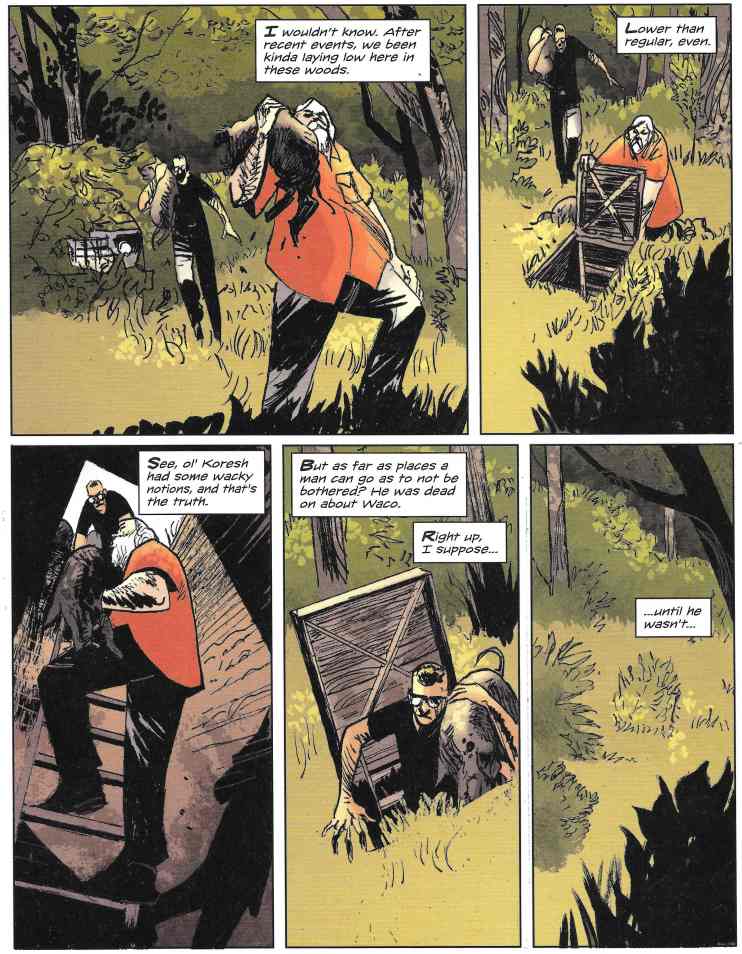 I’m sad that I have to strip this one down for you. Cates has a marvelous ability to write characters in voice, and the Texan in my heart feels these breathing people behind every panel. Even though these are vampires.

We return to the shack where the rest of the family is encamped. I believe this is the father of the pack, who I believe is JV or “Dad.” Our voice over is Barrett, I believe, who narrates most of the series. Right now, with Dad sitting on the porch with a shotgun that means the head of the Bowmans is still wary of what’s coming. 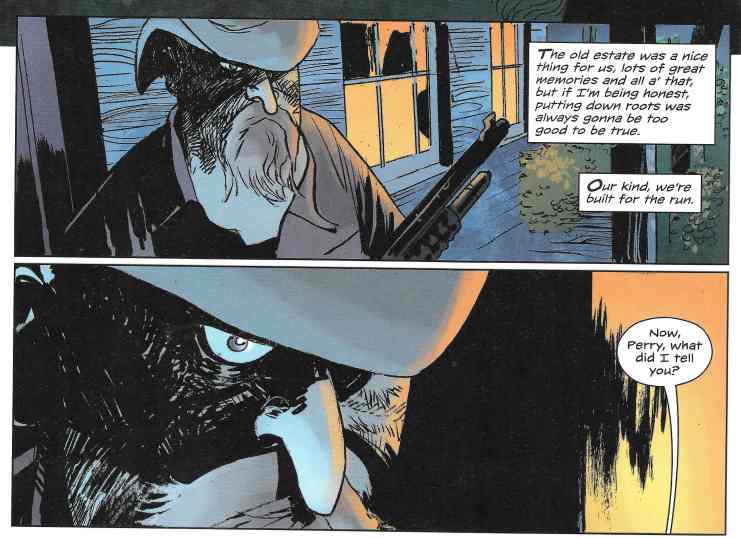 Unlike his kin inside the shack who are playing cards, who are bored and anxious. Perry, the youngest and only girl in the group appears to be winning, however some of that might be on account of her ability to read other’s thoughts. The rest of the clan points this out. 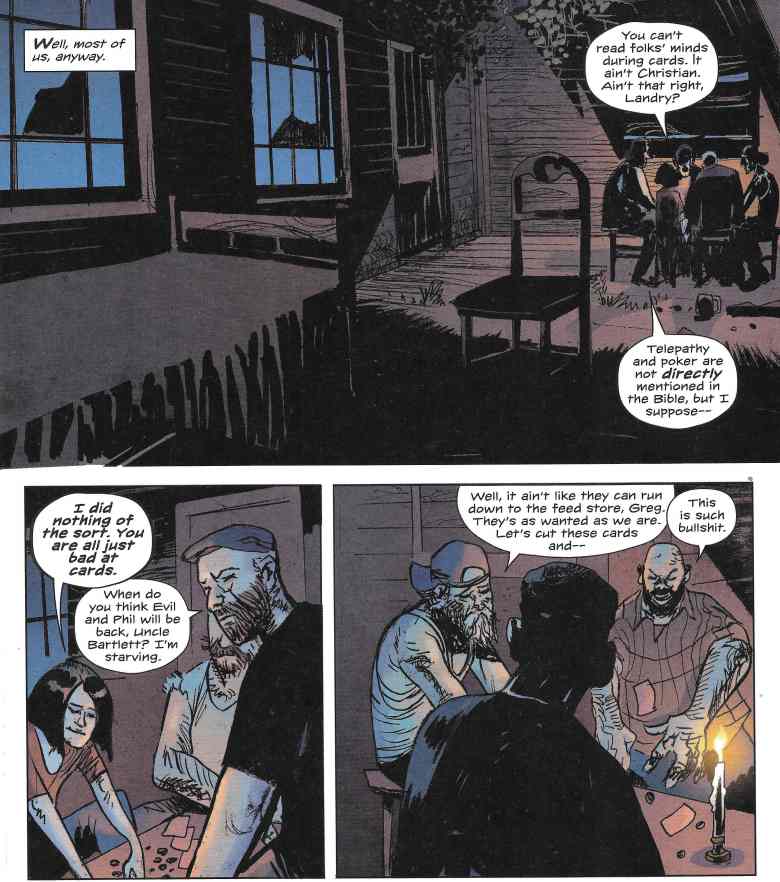 Odd that we find vampires who still seek to live by Christian ideals. Very odd, indeed. Yet also, very bible belt too.

Seamus is the bald gentleman trying to turn the conversation to not remaining holed up. He was one of the trio that made trouble in town last issue and caused much death and destruction. That is if I’m not overstating the trade’s back page blurb. 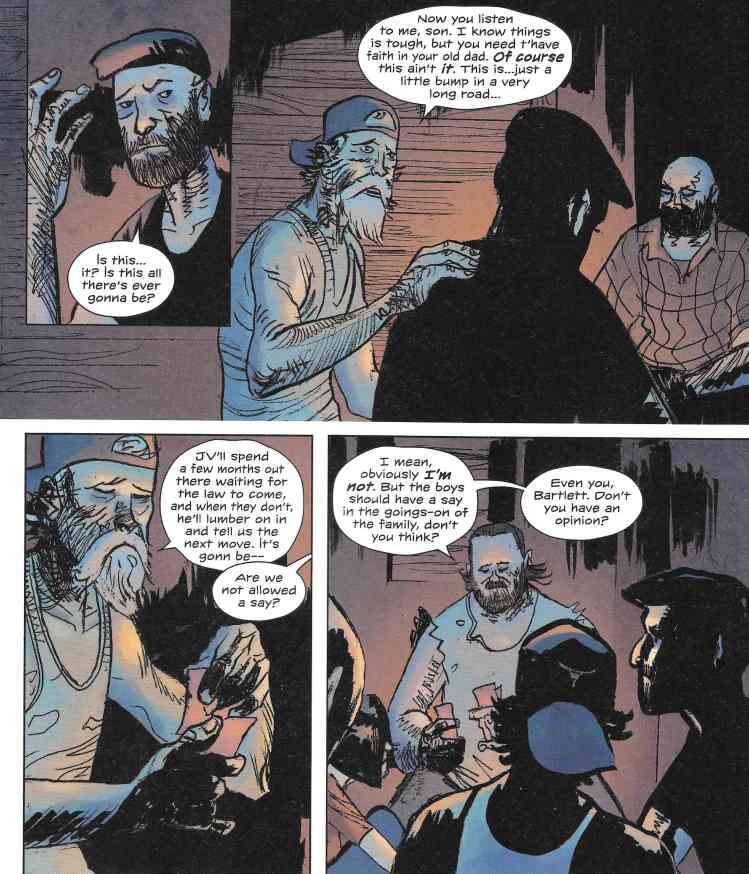 It’s here, across this card table that we start to see the family fracture a little. Alliances are made and a clear division becomes visible between what JV wants for the family and what Seamus wants. It also points out the relative youth of these folks vs JV and Barrett, who take a more mature stance.

We have one element her stoking the fire. Landry, a new vampire who got turned somewhere over the course of the last six issues. He’s playing the brothers against the father to his own advantage, as you will see by issue’s end.

Or as it appears Perry sees right now.

Phil and Evil show up with the hogs, causing the game to break up. Landry tries to mend a fence with Barrett, who is the only one who treats Landry with anything approaching a non-hostile attitude. 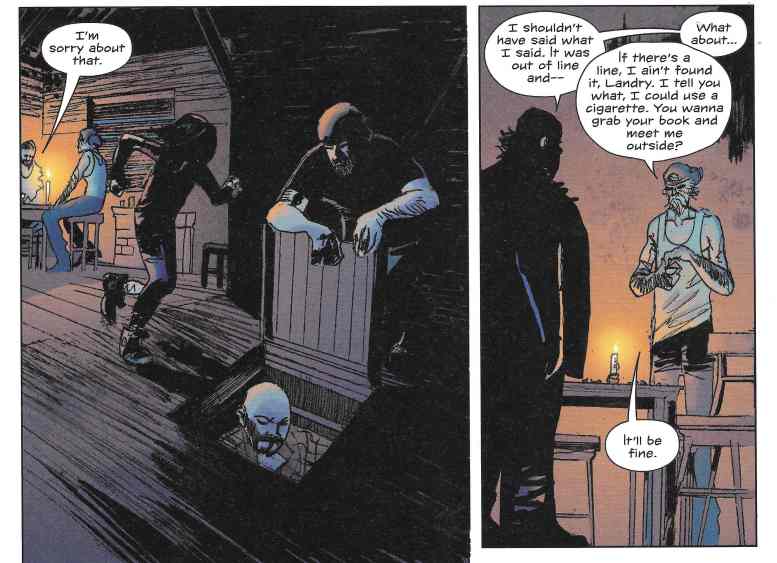 He is also apparently the only one who is attempting to show Landry the vampire ropes, as this scene between Barrett and JV points out. 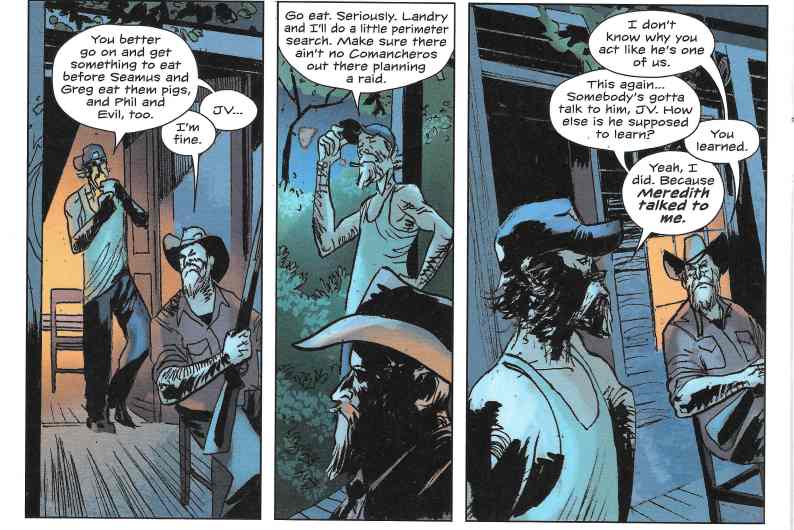 And while JV allows Barrett to take over watching the house, you can tell there is no love lost between him and Landry. Makes me wonder if Slap or Gramp’s death in the prior issues had anything to do with Landry. 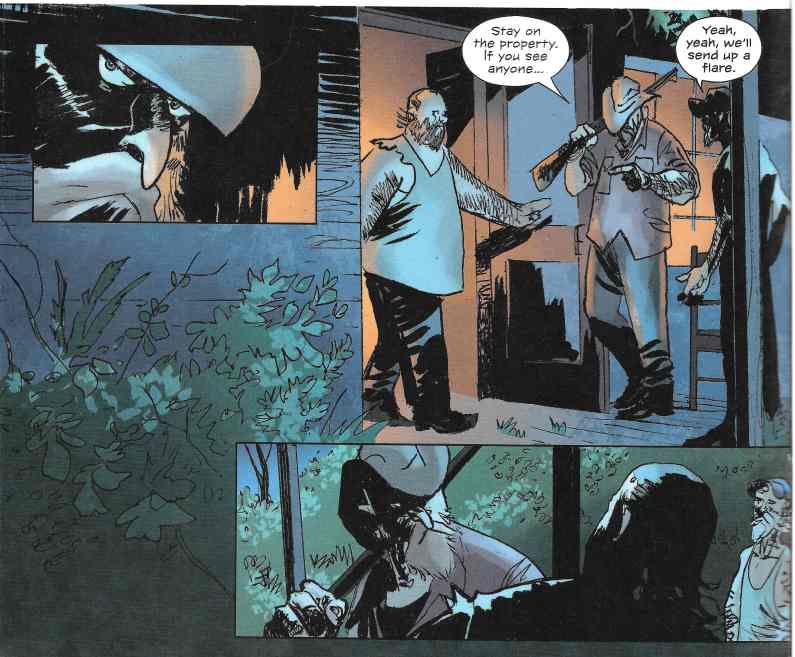 Barrett and Landry start their walk with Barrett asking if he’d like to hear some unflattering stories about his ancestors. That leads me to believe Landry is from the other clan, the neighbors they were at war with. It is entirely possible. Instead Landry wants to know more of the “rules” and frankly so do I.

Barrett goes on schooling him, while uncovering a hidden bottle of “bloodwiser” that he kept under the base of a tree. He shares a swig with Landry while they discuss how the “have to be invited in” rule is in effect, but others aren’t. Landry says that it makes no sense… 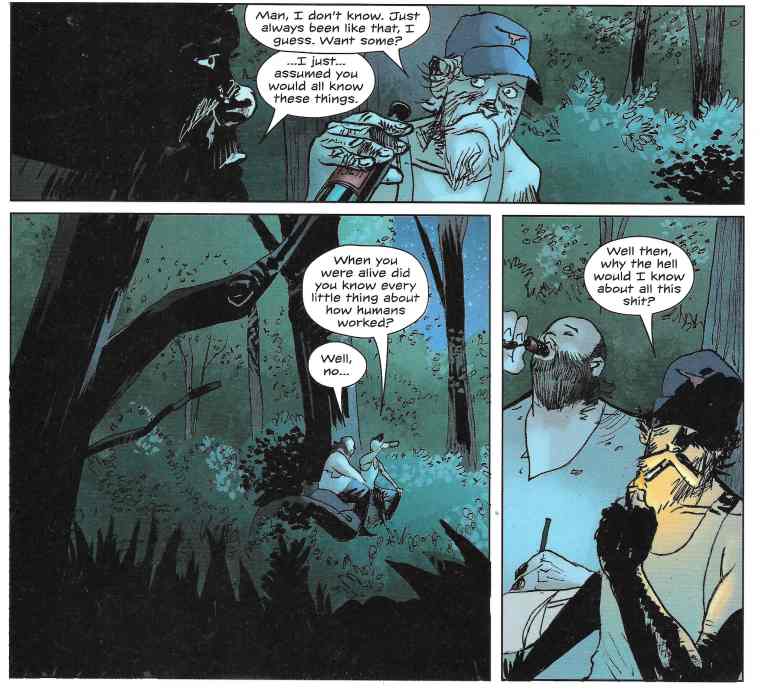 At this point, Barrett points out that Landry isn’t confused anymore about liking pig’s blood, which leads to a foreshadowing conversation. 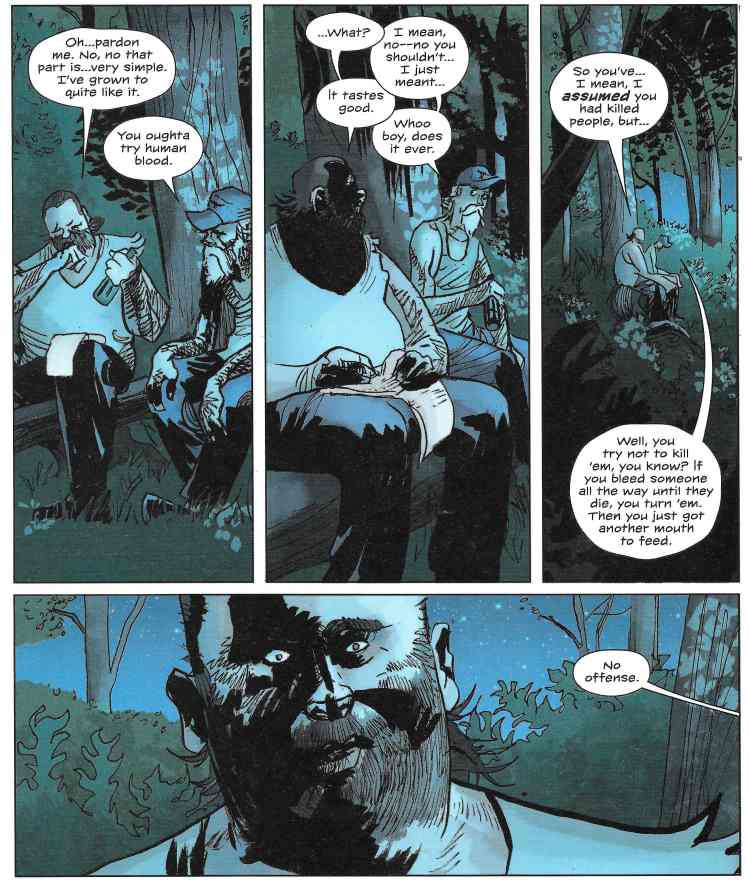 A lot of things going on under the surface in this that I will let percolate for now. Suffice to say, Landry isn’t the good guy he comes off as here and Barrett should recognize that fact.

Landry asks if Barrett ever turned anyone which gets him melancholy for this woman named July. The event must have ended badly for them both, as his reaction shows… 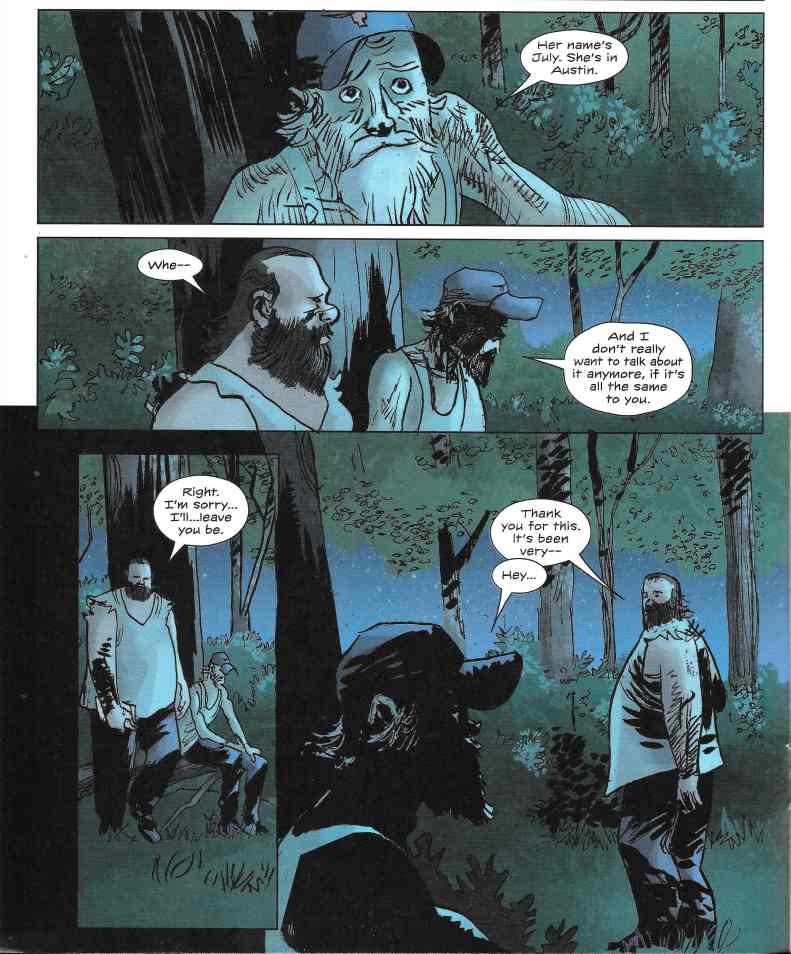 Landry wanders back and Barrett follows shortly thereafter. He finds JV on the porch with a shotgun and a pocketwatch waiting for their return. 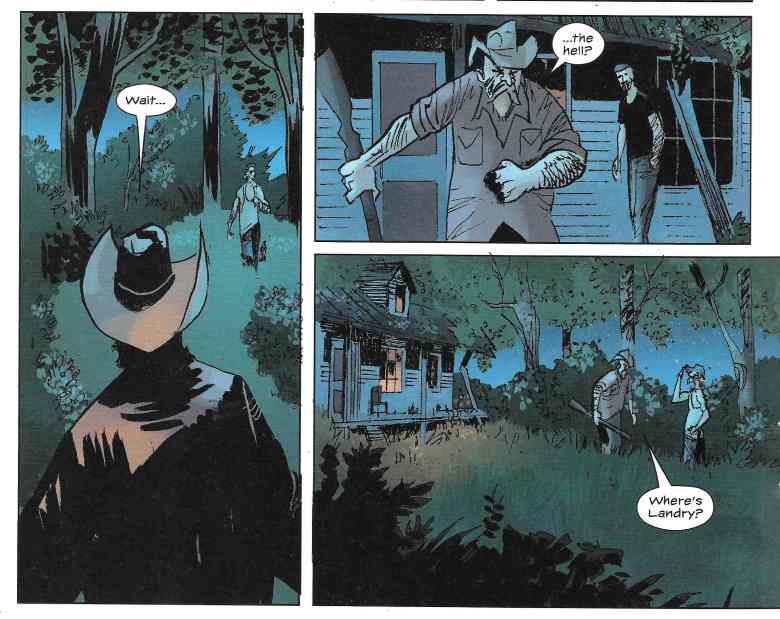 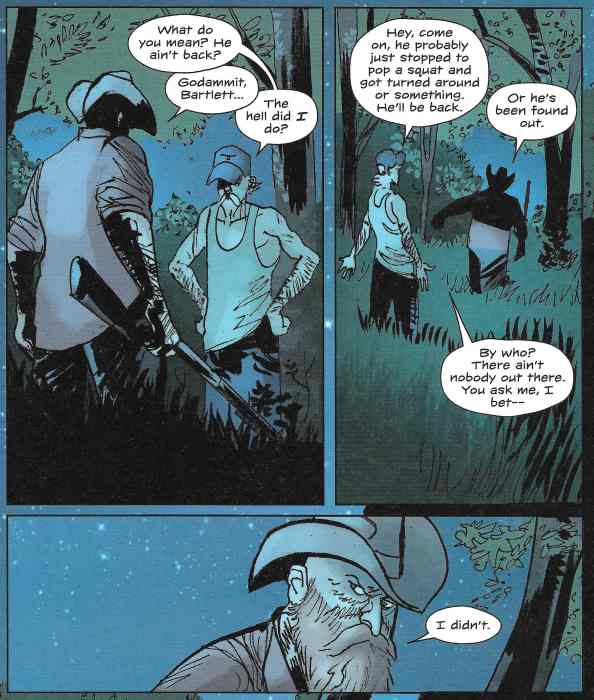 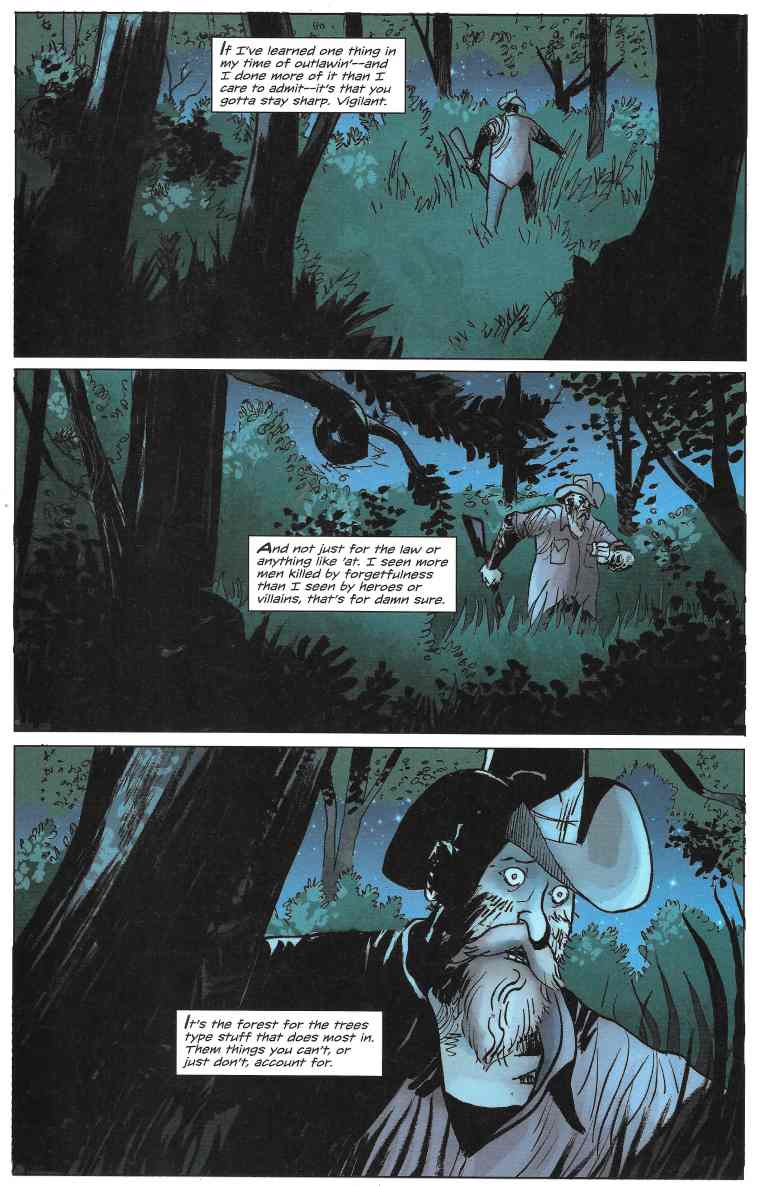 What JV finds when he goes looking for Landry is such a spoiler and this series is so new that I’ve decided to end this review a little early. I will say in conclusion that THIS is an amazingly good series the everyone should support, myself included. Go find a trade or some back issues if you don’t believe me.
Posted by SonOfCthulhu at 2:31 AM