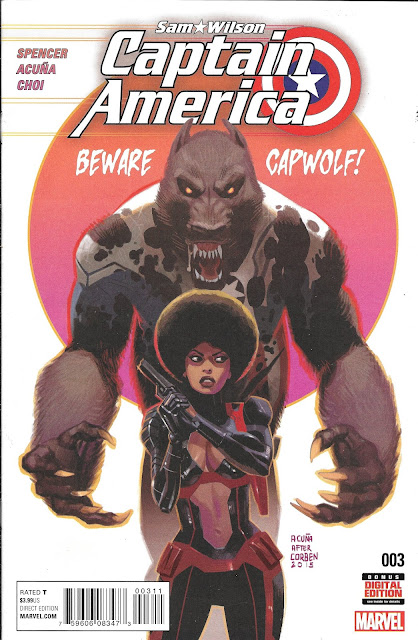 Oh No! Not this Crap again!

Late in the year 2015, Marvel changed out the man wearing the Captain America suit. Steve Rogers, injured in such a way that he felt he could never be Cap again, gave up the mantle of Cap to longtime teammate Sam Wilson a/k/a The Falcon.

And because this was a time in which Marvel was switching out Thor for Jane Foster, Carol Danvers for Kamala Khan and adding a bunch of new, racial and culturally diverse characters, a small hunk of bigoted, misogynist, immature fanboys lost their collective minds.

I won’t give them a platform here nor will I cite any of their numerous attempts in blog and vlog to legitimize their collective hissy-fit. They were wrong. Comics were always about change, always about not marginalizing people based on race, religion, sexual orientation, skin color, or number of appendages.

They were just too stupid to understand the message.

In the mid-80’s Marvel changed out Iron Man for a bit too, remember. Tony drank his way into the gutter and his road to recovery was over a year long. James Rhodes, also a black man, stepped up and took over Iron Man’s duties. Perhaps because there was not an internet to speak of at the time, the hue and cry was not heard from these same man-boys. That or it wasn't seen as a big deal. Either way, the stories served to strengthen both characters and the book they were attached to. It was a great run. I have it and as an Iron Man fanboy I LOVED it.

I’ll admit to not having read any of the Sam Wilson run. I stopped buying comics when a single issue started costing more than a Happy Meal. But would Cap being a black man have caused me to drop a title? Nope.

Nor Thor being a woman. Nor Ms. Marvel being a practicing Muslim (that’s a fabulous series, btw). Because I’m a grown-up, this is episodic fantasy escapism entertainment, and if the color of a character’s skin makes you pee in your own corn flakes, the problem is with YOU.

Now that I have all of that out of the way, I can dig into this…ugh…REVIVAL of CapWolf. The single most horrifying bit of comic book nostalgia I’ve yet to come across. It’s going to get ugly folks, but not because of racism. But because…CapWolf! Seriously?

We begin the issue with Misty Knight, of Power Man – Iron Fist fame for those of you old school enough to be keeping score, sorta sneaking into a facility to rescue Cap. She encounters two hostiles and this is where that “sorta sneaking” comes into play. 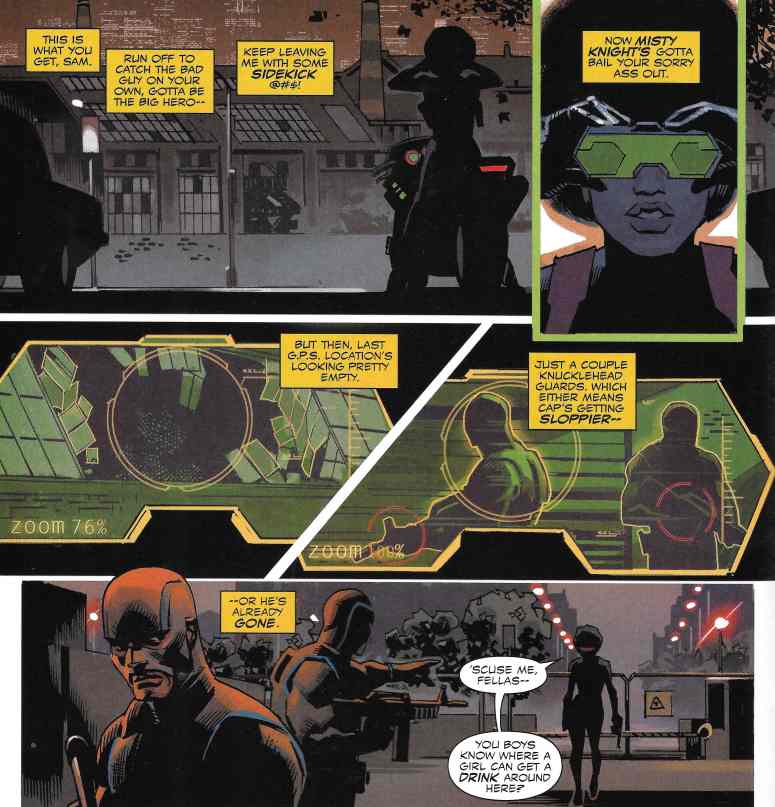 Without breaking a sweat, she knocks these two discount henchmen out and I’m digging her butt kicking vibe in this. Good to see Misty is still bad ass.

It’s then that she runs afoul of this Bebop reference from TMNT. Misty may be in more trouble than she realizes. 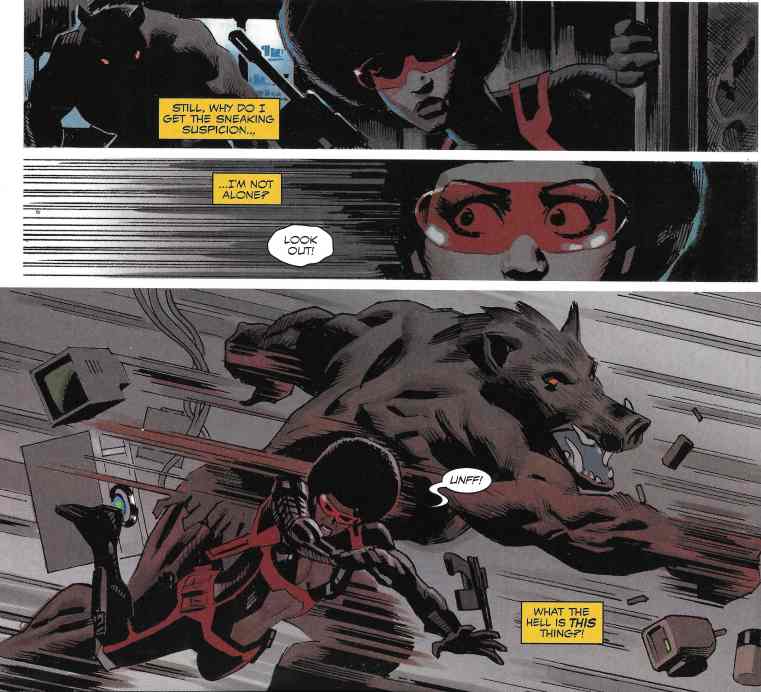 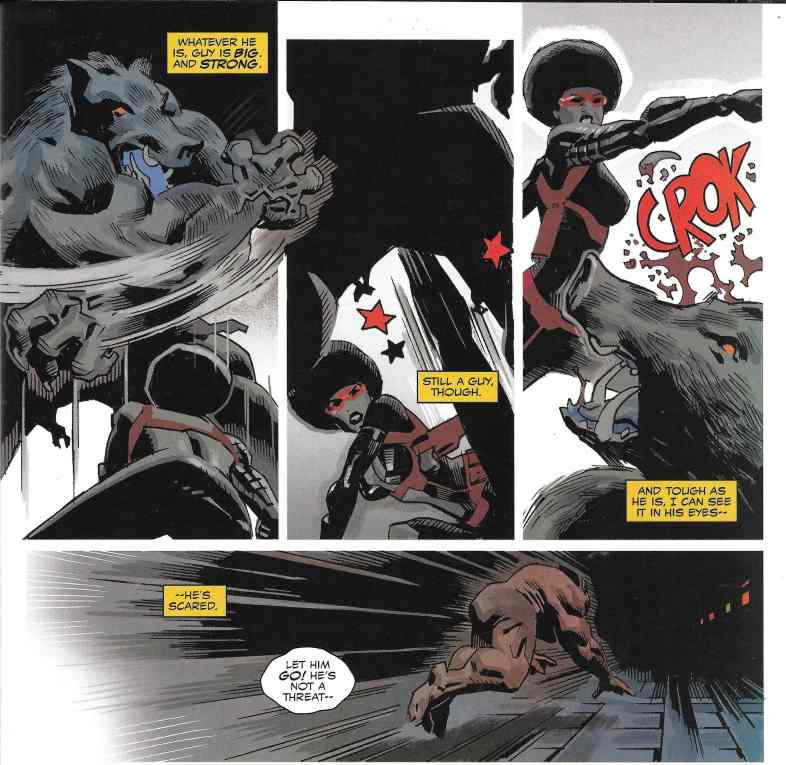 Yeah, Misty cements her worth to the team and as Bebop makes a bee-line out of there… 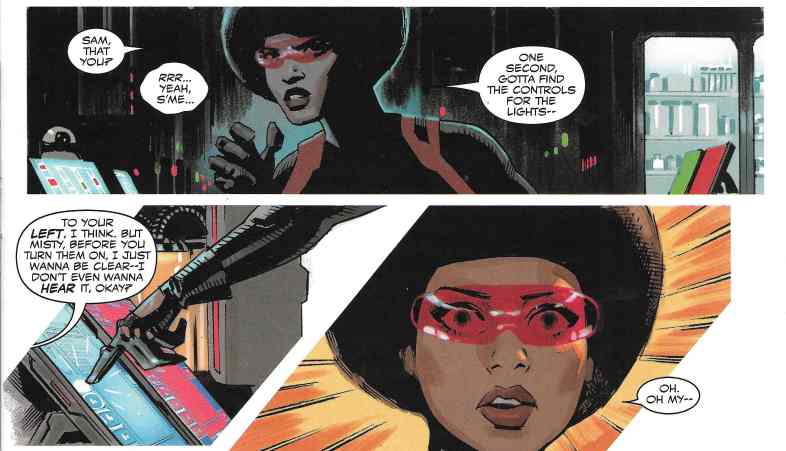 Misty comes across something SHOCKING! 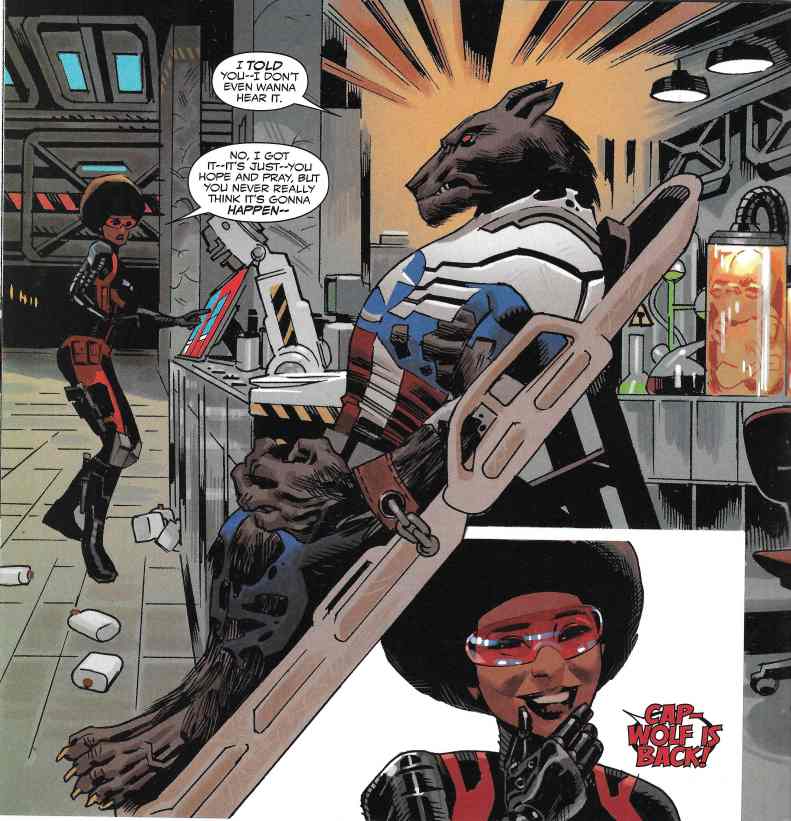 Yup. The nightmare that they couldn’t keep down. The bit of kitsch that has cropped up a lot at the time of this printing, what with the release of this book heralding both an action figure and a statue of the original CapWolf. As if anyone really needed the reminder. It’s right about here that I wonder if the book is going off the rails a bit. I mean we are at issue 3 of Spencer’s run and throwing in nostalgia of this level seems a bit…calculated?

I’m going to reserve judgment until the end, so let’s look at how we got here…

We begin with Cap winging his way to a warehouse on a tip from a woman that her grandson has been captured by the Sons of the Serpent, the Hydra stand-in for this series. And speaking of winging, I love that Sam kept the Falcon gear and added it as part of his Cap costume. Go with your strengths, and this makes him different both visually and tactically from the prior Cap. Love the inclusion.

And speaking of inclusions, we have the Power Broker's top scientist Karl Malus as our bad guy this issue. Here he has turned an innocent victim into a giant talking iguana. 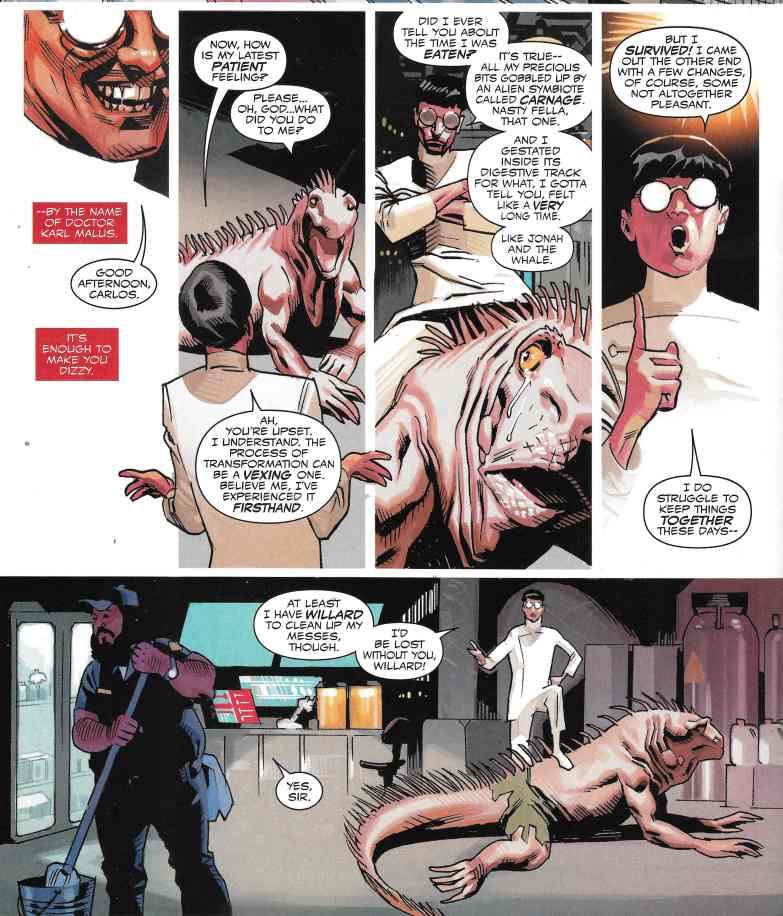 Might I point out that it feels a bit…racist…to have a Hispanic turned into an iguana? Maybe I’ve listen to the song “Mexican Radio” too much. Either way, we get an extended re-introduction of Malus, which tells us everything we need to know about him. 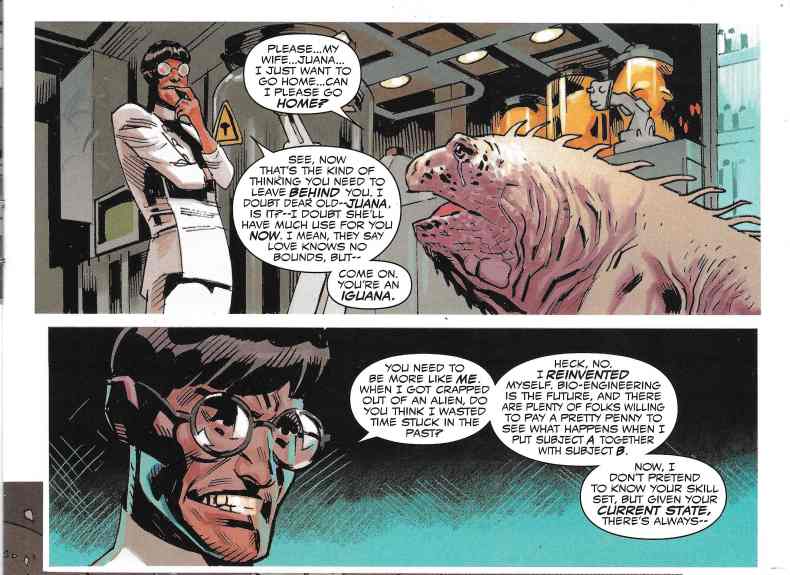 While I’m still pondering things, Cap breaks in and STRAIGHT UP MURDERS KARL MALUS. That…that’s not…that’s not Cap’s style. Granted this does NOT kill Malus, but this being my first exposure to Sam as Cap, I got a bit concerned the book was taking a vast change from Cap’s strict adherence to due process. It had, but Sam isn’t a bloodthirsty murdering vigilante as this makes him out to be. 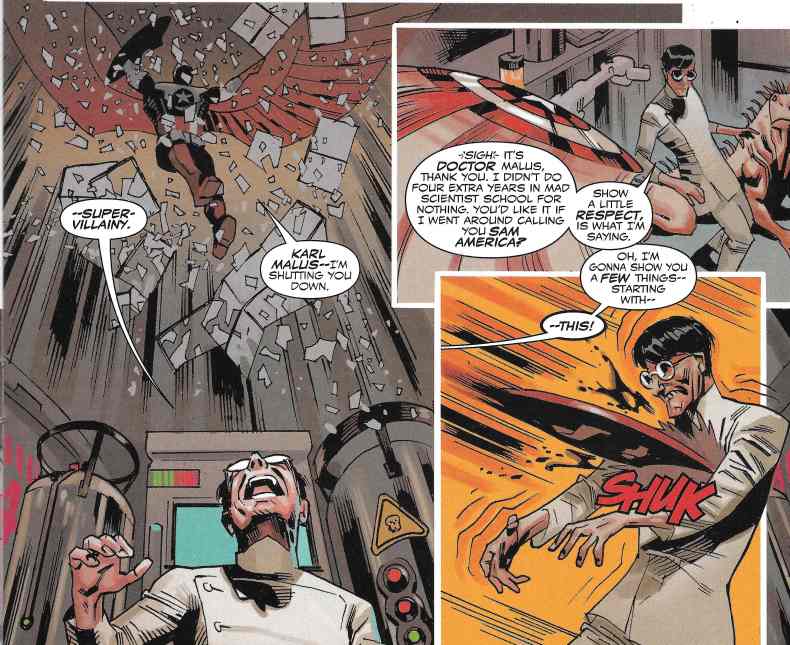 I’m gonna go with, he expect it to knock him across the room. Which didn’t happen, because… 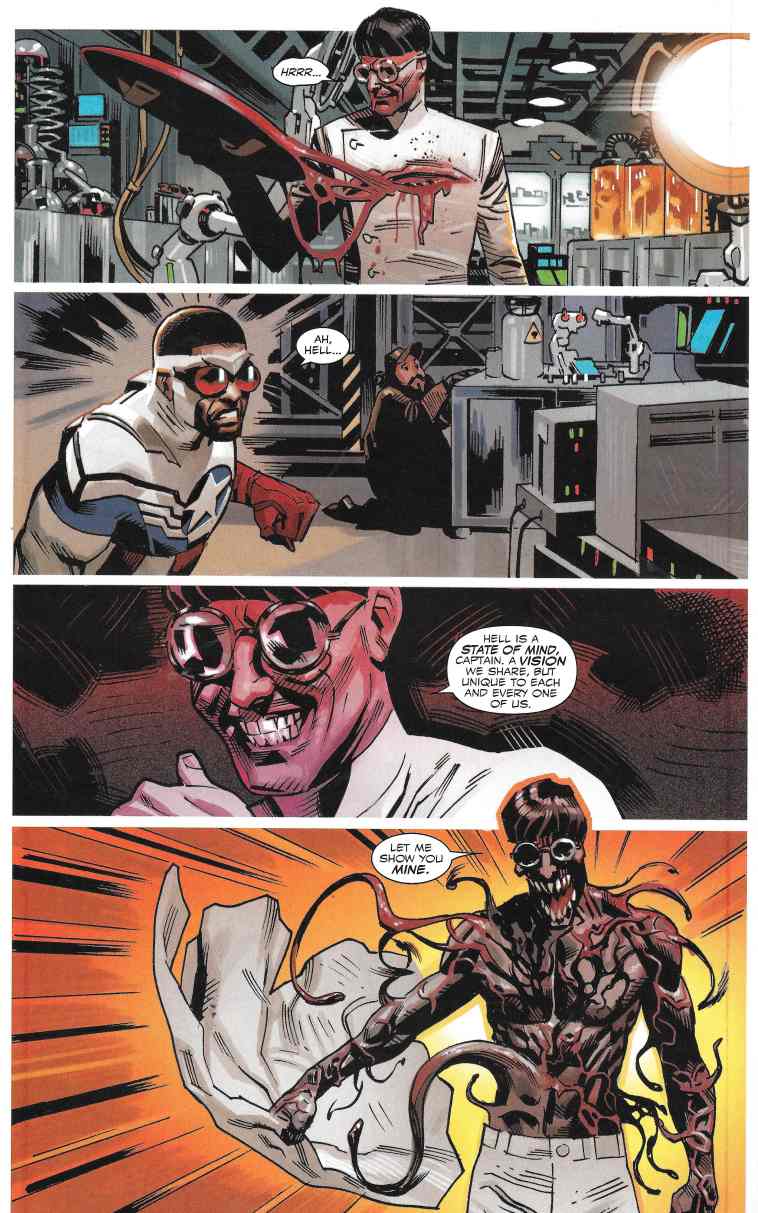 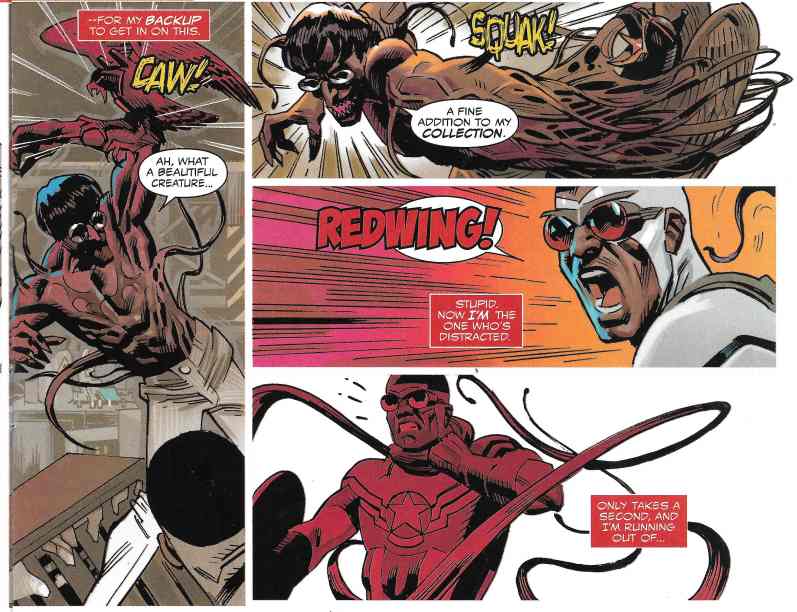 Which is how we get to the story in progress from the book’s beginning. Malus experiments on Sam, leading to the cot-strapped CapWolf. 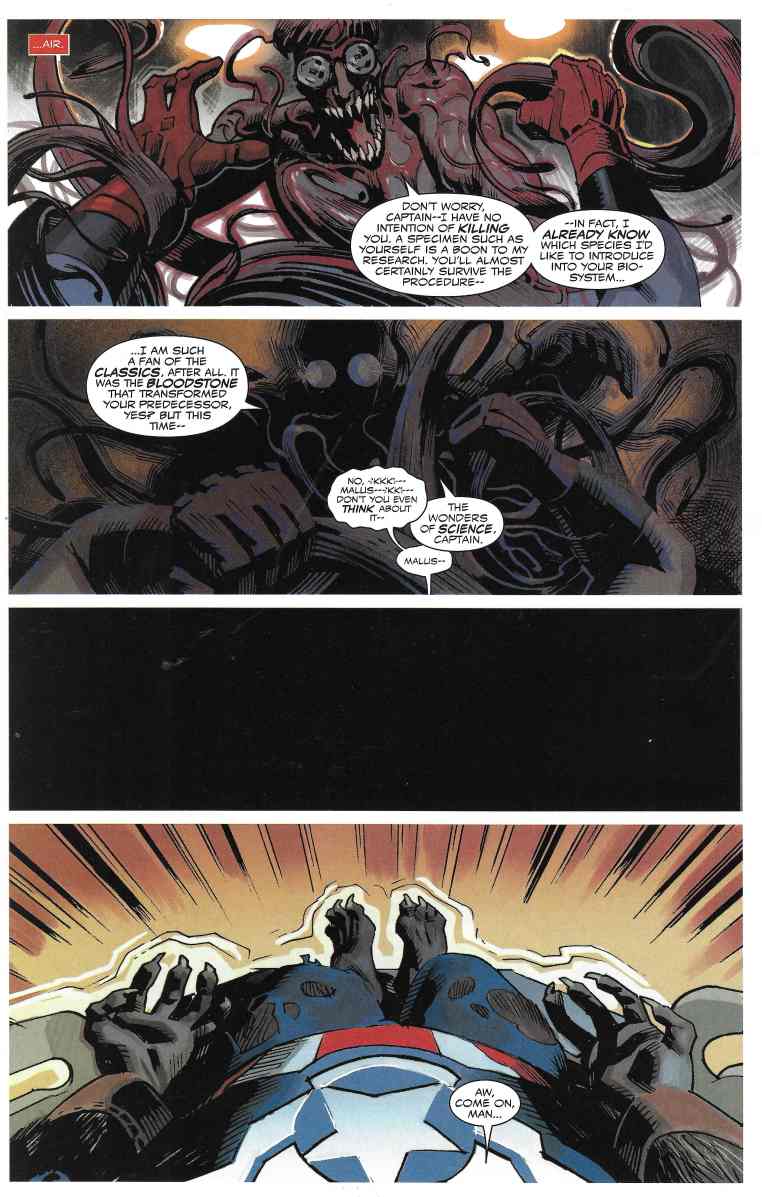 And here’s a bit where Spencer’s writing got annoying for me. Misty helps Sam down and then starts peppering him with bad, bad werewolf puns. Some of these howlers (shit, got me doing it now) were so bad I wanted to set the book aside. I think editorial should have stepped in and quashed a few of these before they saw print. 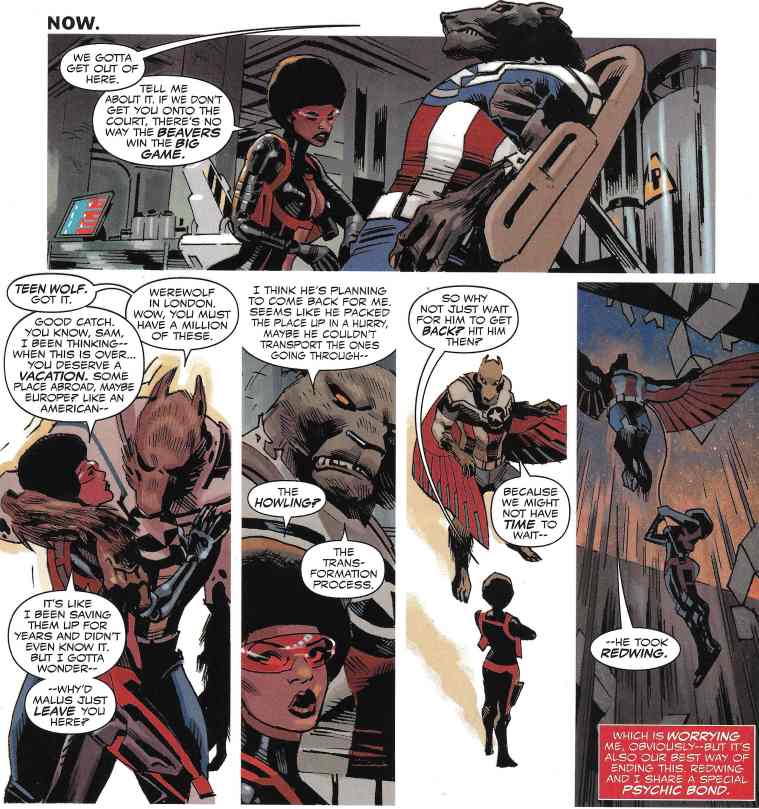 Another thing the book shoehorns in, is that fact that Sam in recent issues appears to be more of a Democratic Socialist with leanings toward civil rights activism than the prior Cap. So, we have to have a guy shout out that he’s a communist as he flies past.

And think about that for a moment: Steve’s Cap has always been a champion of justice and the American right to dissent. He’s walked away from the uniform twice in my recollection due to how he though Cap ought to be viewed. A very liberal thing to do, even as he seemed to support many traditional views about the rule of law.

But this book is taking the polarizing viewpoints of today’s society and forcing them to directly be talking points in the story. Not this story, certainly, but many others in the run I’ve seen. That is a discussion for another time, but I think the allegory here is so spot-on that the book suffers a little for it. The best way to reach an audience is to make them understand a viewpoint from another side, not jab at them with a sharpened stick. That just makes people defend their core value opinions even stronger. I take issue with the persuasive style used here, NOT the message.

And see how that threw us completely out of the utter lunacy of Sam flying around as CapWolf? Get us back on track book, quick!

The book tries, but again the lame jokey style of this really feels off for the third issue in a series. Any series. The tone of a CapWolf story should be campy, I get that, but do we need issue three to have Malus moving into an AirBnB because he couldn’t find another place to house his experiments. Do we need him threatening the owner of this hostel? Do we need the credit card joke? 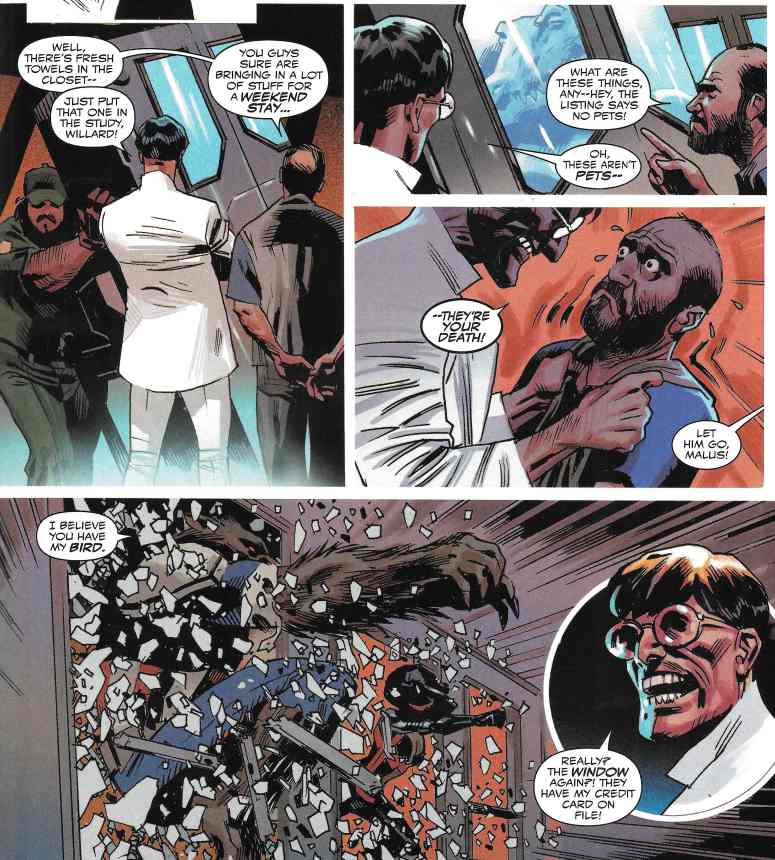 I really wanted this to be a more serious story. The original CapWolf was funny because everything was played straight. This one everything is a joke and it doesn’t come off as fun. It feels forced.

Luckily, CapWolf finally has Malus all figured out. He uses the old sonics to knock out the mad doctor and all that is left is mopping up his assorted monster crew.

They even manage to find Redwing and Joaquin, our missing grandson. Although right now he looks a bit more like a missing extra from the Flash Gordon Hawkman scene. 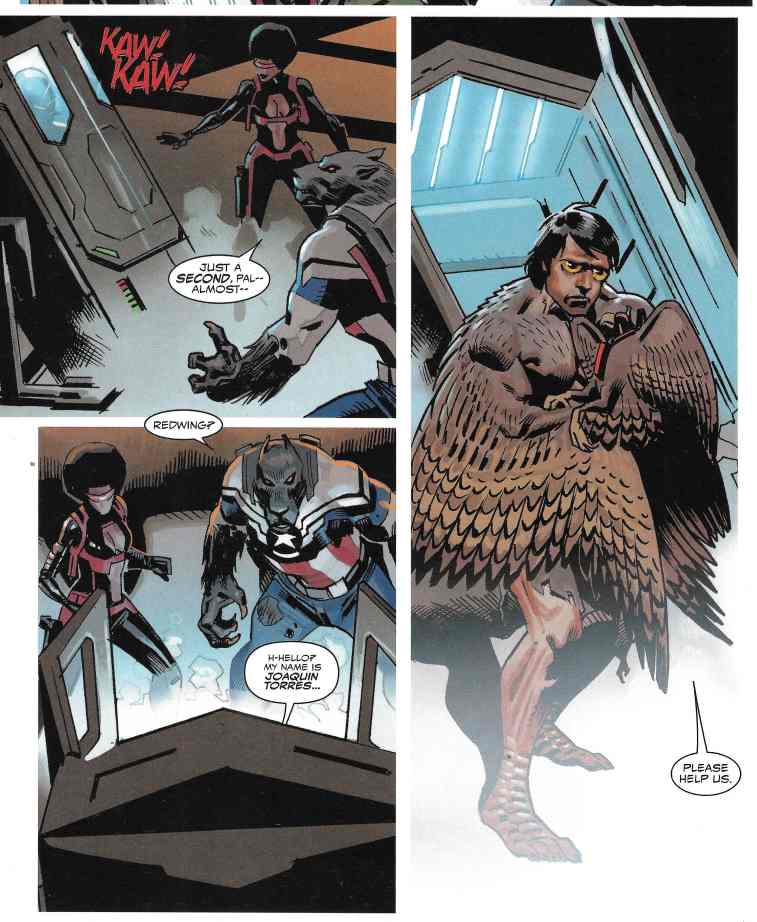 After her initial shock at… 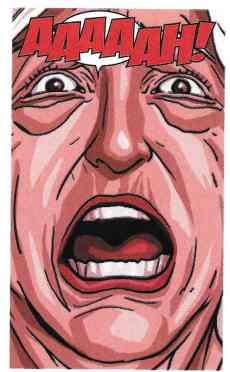 …and seeing Sam as CapWolf she gets the skinny on what went down with her grandson and another member of the grateful public is won over to his side. Likely the CapWolf thing will ware…I mean wear off between issues. 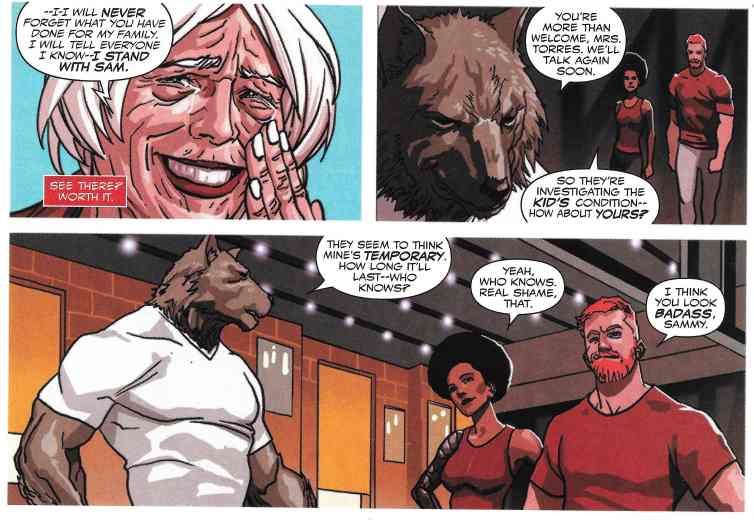 And it looks like CapWolf came down with a vicious case of fleas during the adventure. And no, I’m not kidding about that. Nor about this next bit, with Sam’s stand in for Edward Snowden…The Whisperer. (not in darkness). 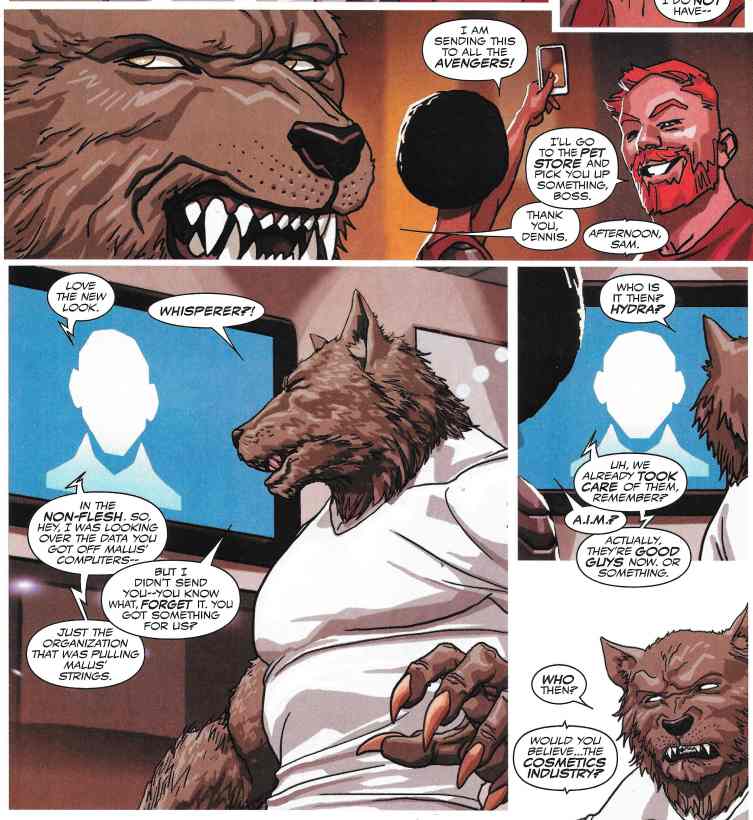 What won’t wear off is the fact that the book becomes pretty blatant about fighting the evils of unrestrained capitalism. Specifically the fact that Malus was selling his wears to advertising firms who used his unnatural monstrosities to make ad campaigns. 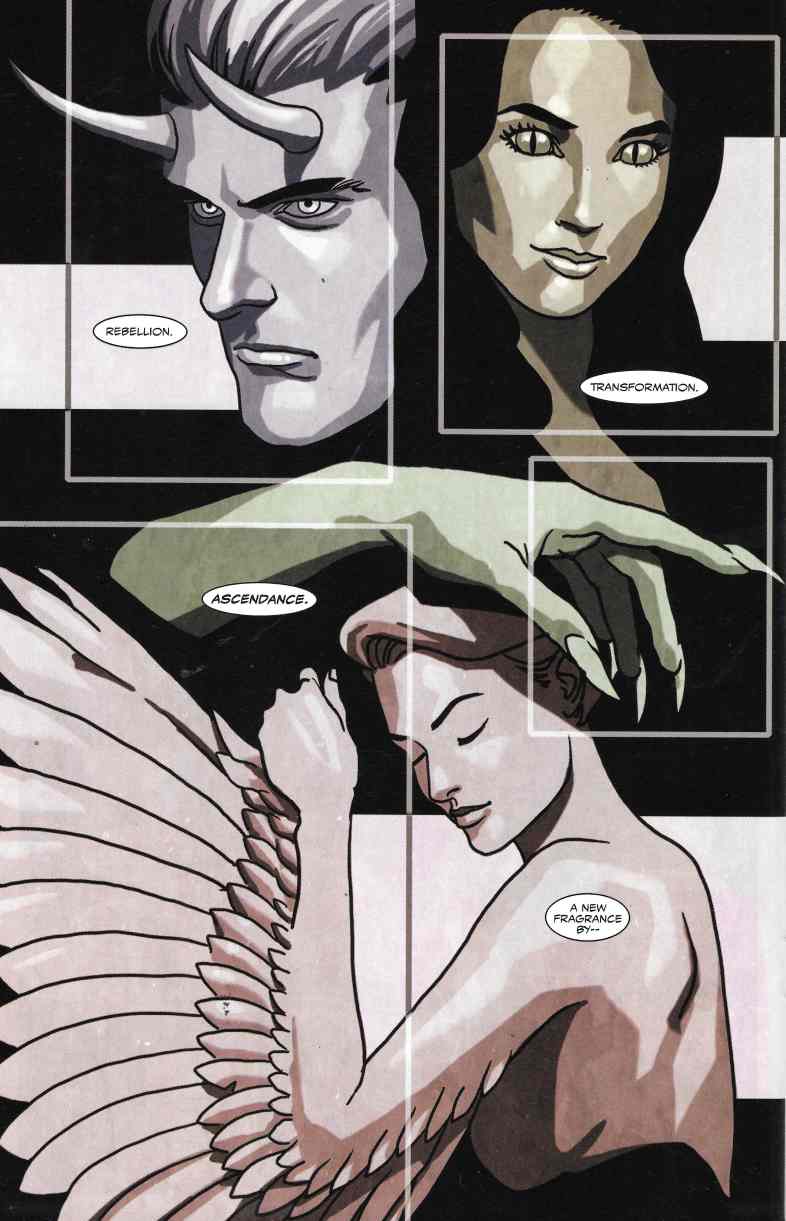 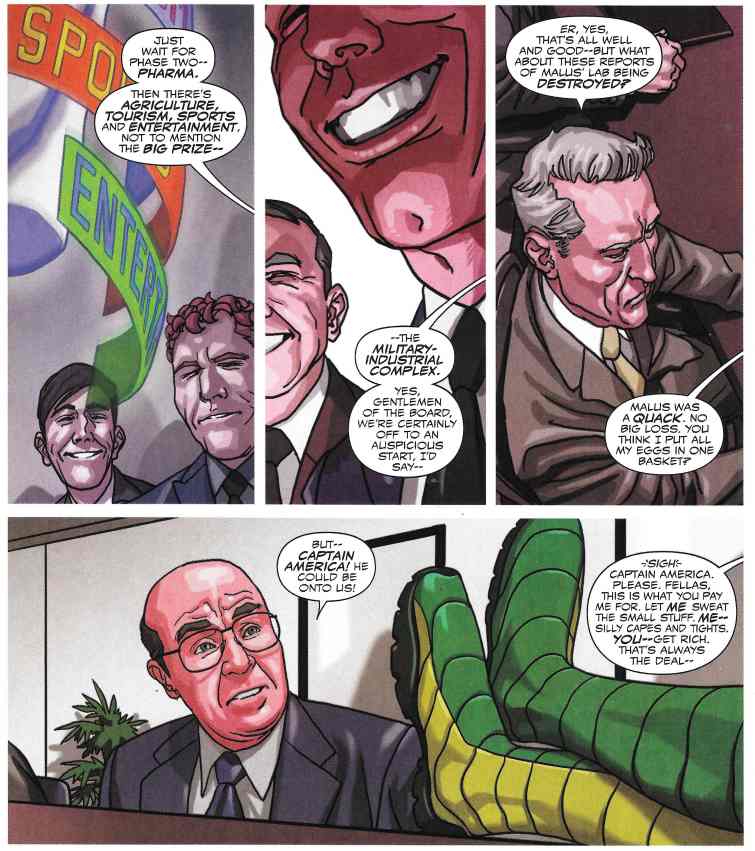 …what appears to be the remains of the Serpent Society, now going by the moniker of Serpent Solutions. 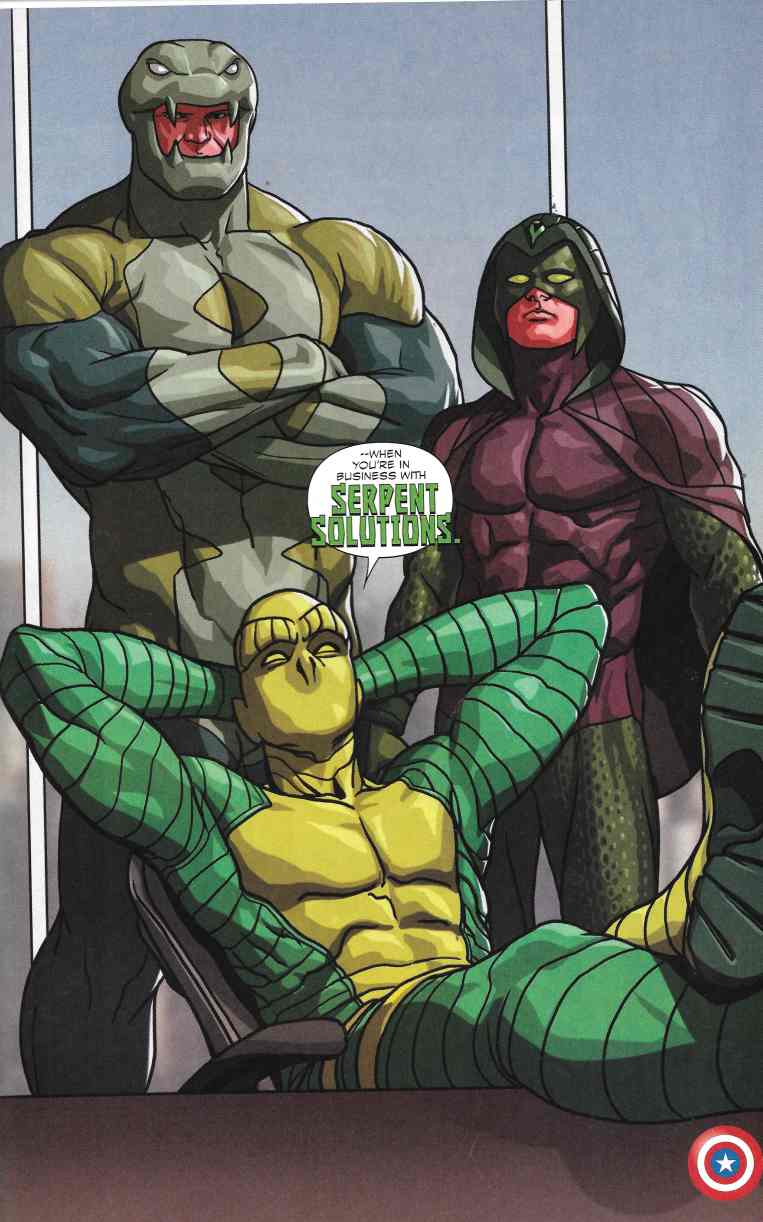 This was probably not the Sam Wilson Cap book to review first. Sam deserved an honest start and shot at holding the shield on his own and this issue seemed rife with crummy jokes and dull one-liners.

It did rejuvenate CapWolf though. Hopefully for the very last time…
Posted by SonOfCthulhu at 3:43 AM