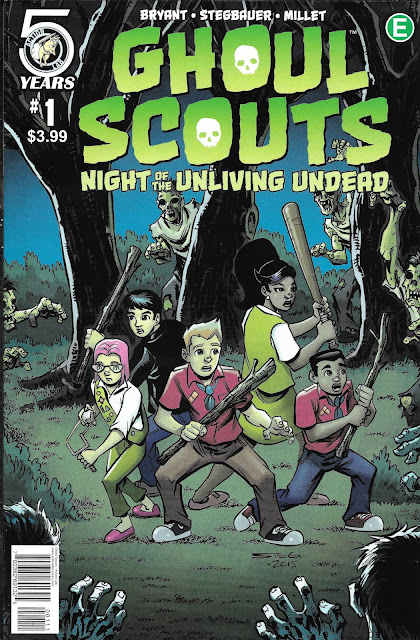 An all ages tale that will have them in knots


"Night of the Unliving Undead, Part 1”


After so much blood, guts, and gore, I knew we needed a Crapbox article that presented a book you could share with your smaller ones. Steve Bryant’s Ghoul Scouts first adventure presented itself, so I hopped onboard. Here we have an all-ages tale of scary zombies who don’t come close to killing anyone and many, many off-camera bludgeonings.


Yeah, I quite enjoyed this one. Steve Bryant’s art is usually the showcase of books he is a part of, but here Bryant provides story only and allows Mark Stegbauer do all the hefty lifting. This is the first part of a four part story, which was collected as Ghoul Scouts: Night of the Unliving Undead. It was followed by another four issues that were traded as Ghoul Scouts: I Was A Tweenage Werewolf.


This book contains the kind zombie tales with nary an ounce of blood or viscera in sight. The heroes are pluckish and the villains dispatched without any visible beheadings or bashed in skullcaps. I’m going to admit that I couldn’t quit figure out how they were going to pull that off, but the answer is stylishly and with enough character and young reader thrills to make this a good beginners Halloween comic.


We begin with our four boy characters sitting around a campfire after dark. They are located a few hundred yards from Wolfsbane Cemetary and far from their scout group’s main campsite. The reason for this relocation? I’ll let the boys explain… 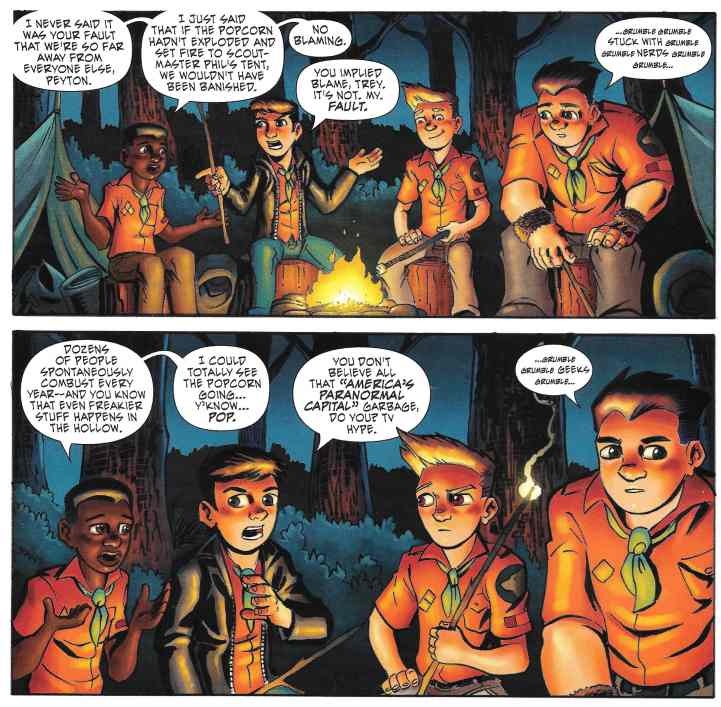 Meet Trey, Peyton, and the speechless for now blonde guy, Chase. The mountain beside them is Jeff, who will quickly make an exit from the book. Perhaps in a permanent way. Only time will tell. 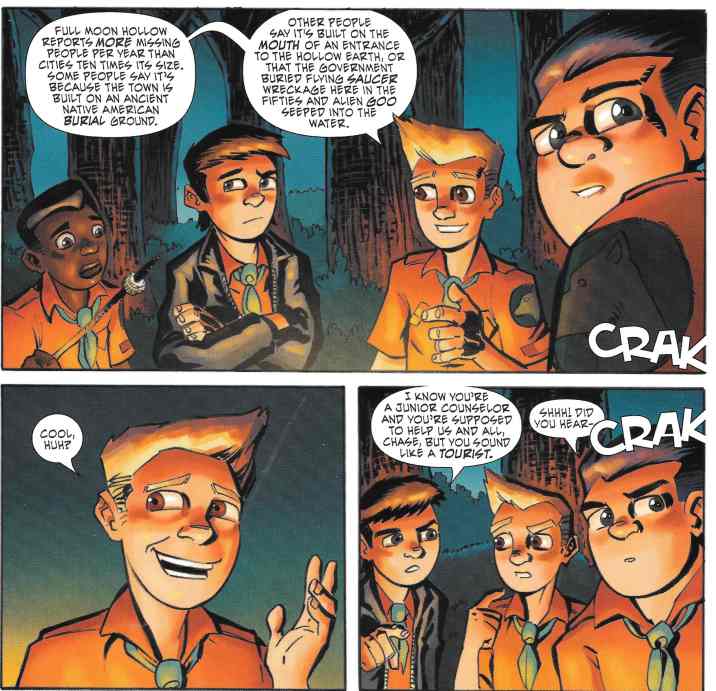 …followed by a jump scare… 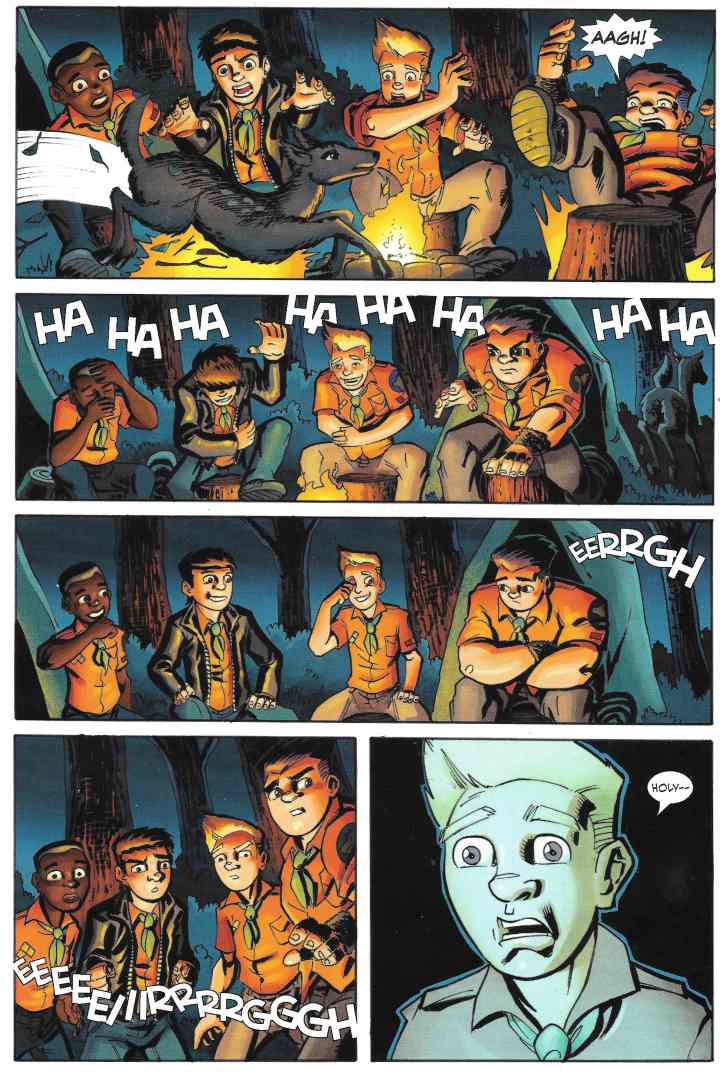 …followed by the REAL scare, as glowing green zombies pop out of the forest. 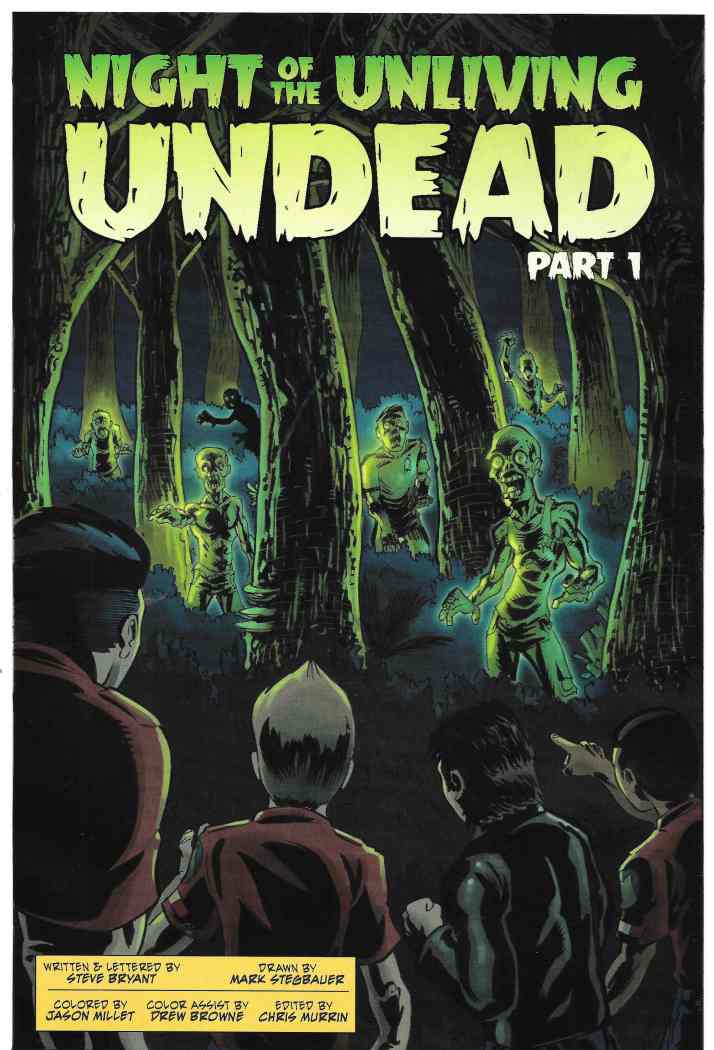 The scouts split up, with Jeff taking an extended powder off to who knows where. Peyton, meanwhile looks to be in a bit of trouble. 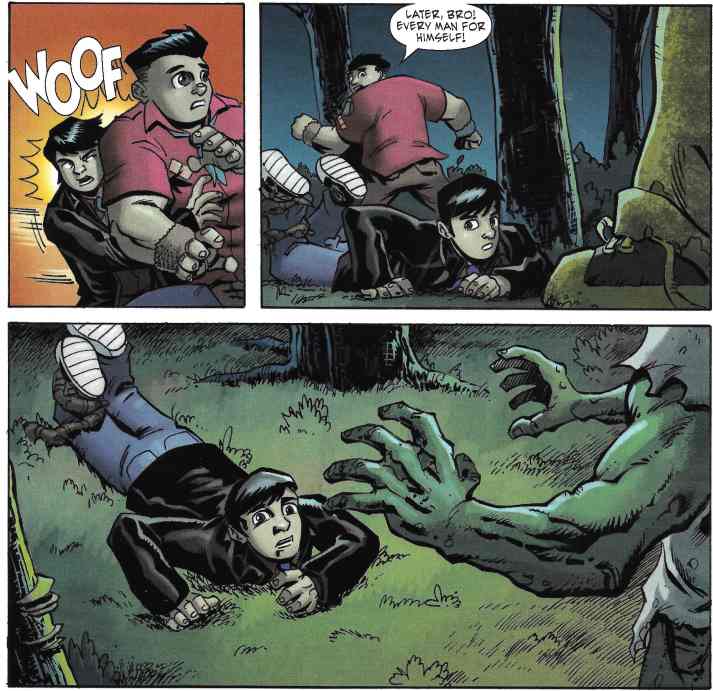 Until someone taps out his zombie with a large tree branch.

It's a long drive over centerfield. 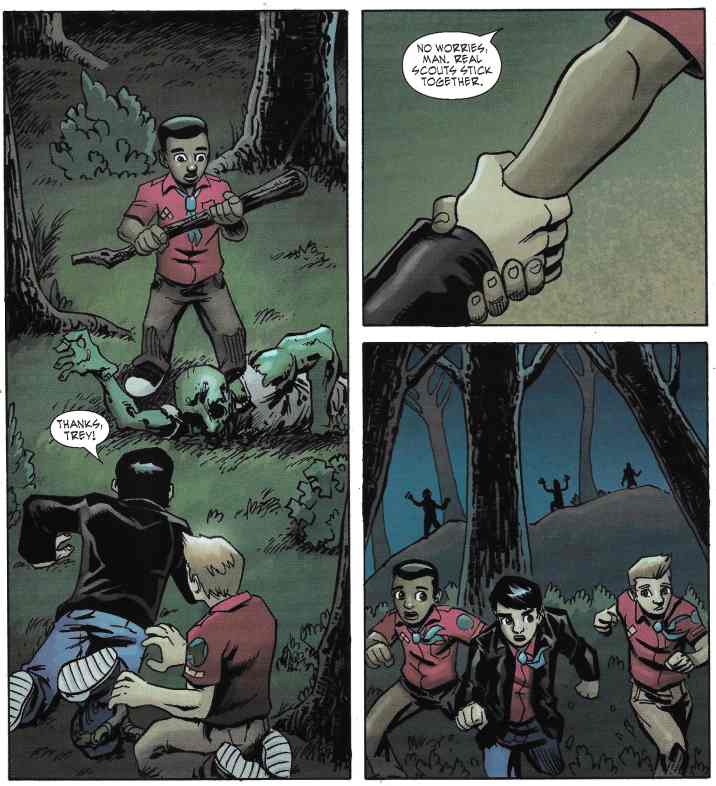 So, Peyton, Trey, and Chase stick together while running from these nasty zombie fellows. This works out well for a bit, until they run into a wild animal trap. 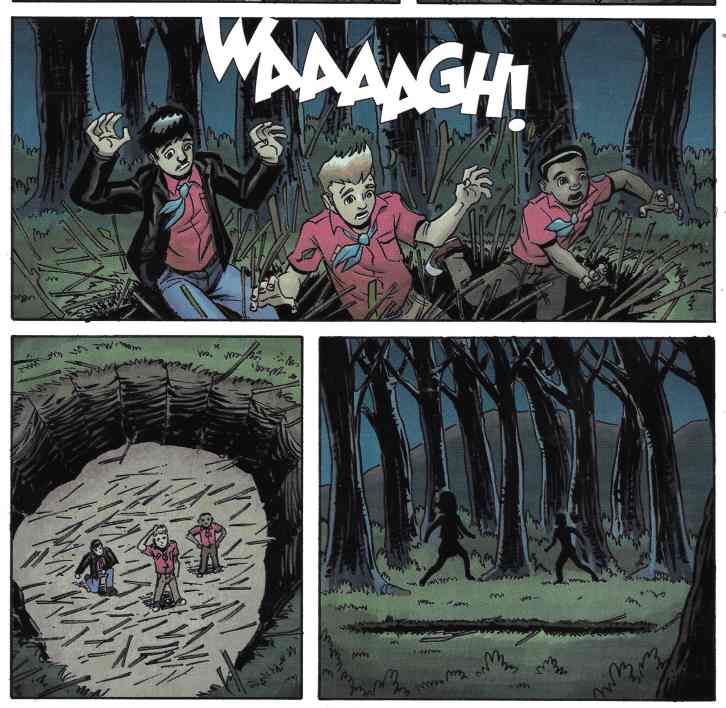 Now, I’m not going to fret over how this trap came to be. The people who apparently dug it are these two ladies… 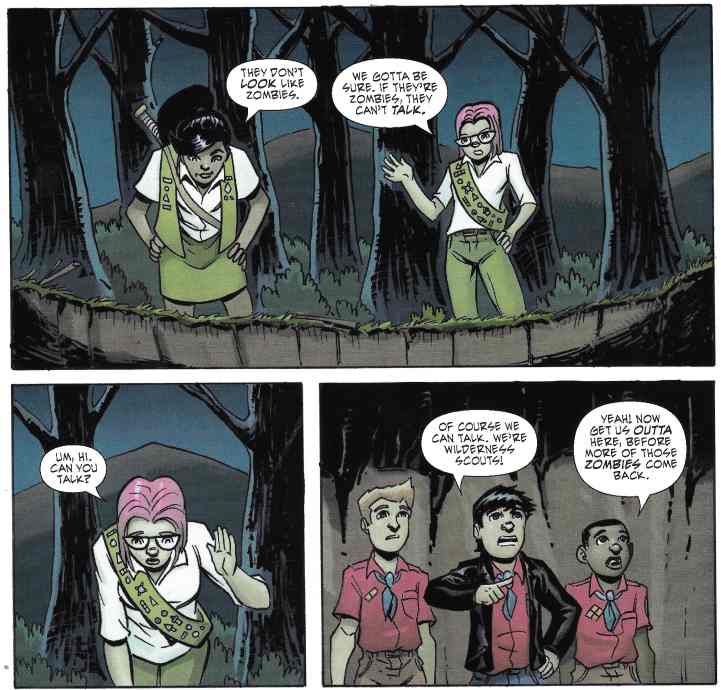 …and they state they dug it to catch zombies, which would make them VERY fast diggers, not to mention all the other things you would have to do to get a trap like this prepared. My thinking is these two are a bit boy-crazy and have been stalking the boy’s scout camp. Then the zombies appeared and they just…you know… switched targets.


In a jiffy the girls help most of the boys out of the pit trap, with Chase getting the bottom of the barrel, as it were. Which is poor timing because a passel of green zeds suddenly jump out of the woods at the foursome. Which doesn’t’ appear to be any problem for these preteens. They know exactly what to do. 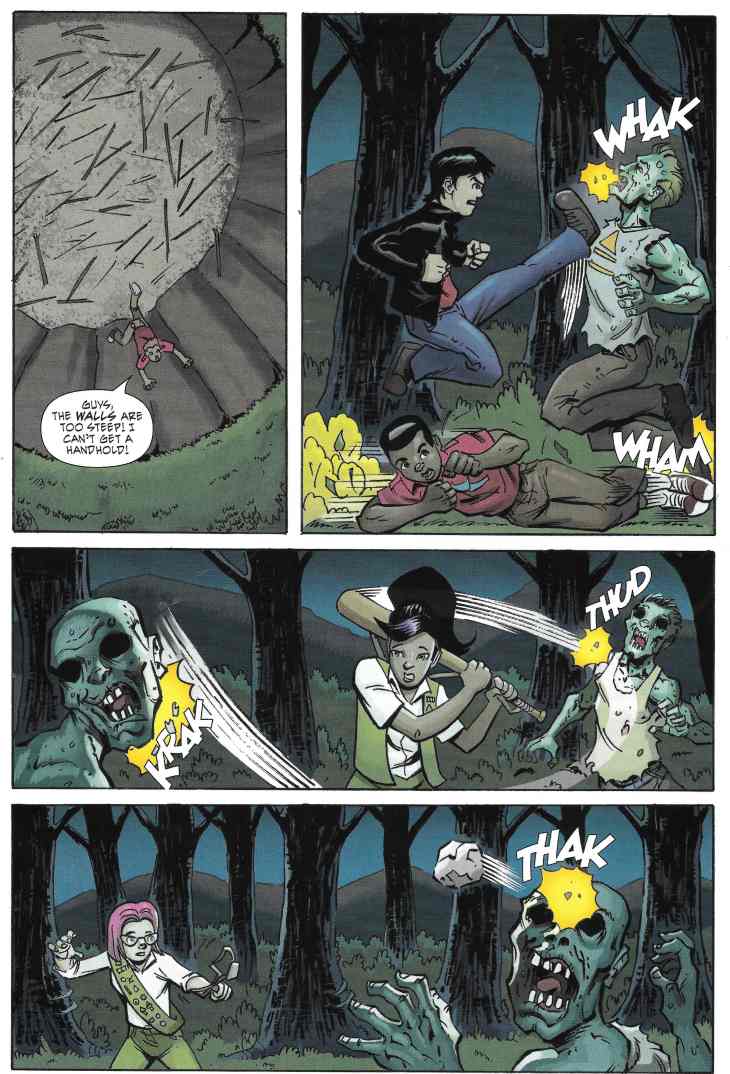 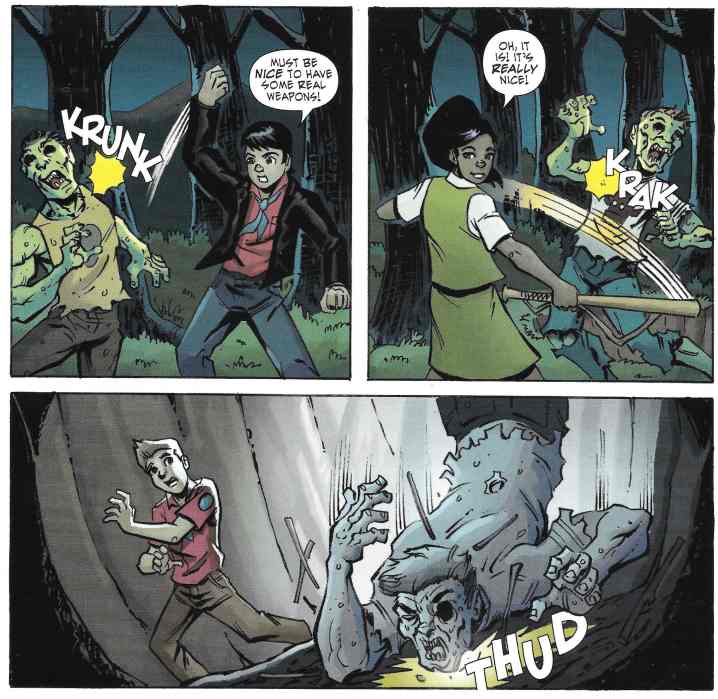 Chase just uses the guy to get a head (and shoulder) start up the pit wall. 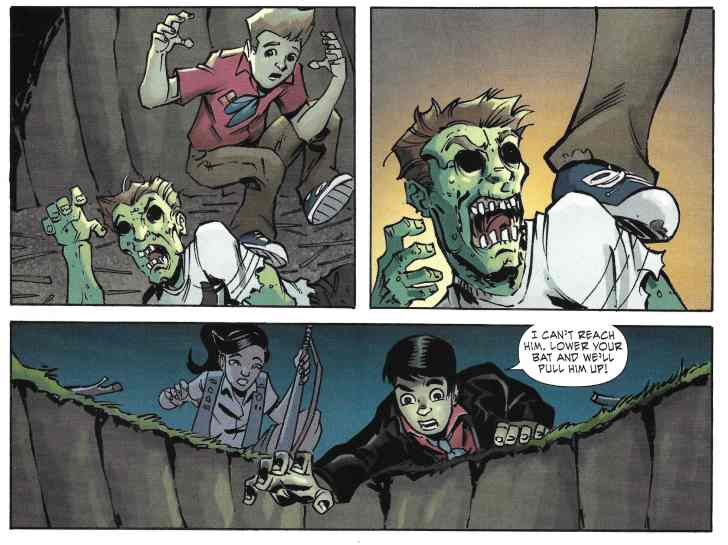 The girl who accidentally knocked this one down in with him responds to Trey’s request, however Chase’s weight turns out to be too much for her, ending with the bat going into the pit with Chase. 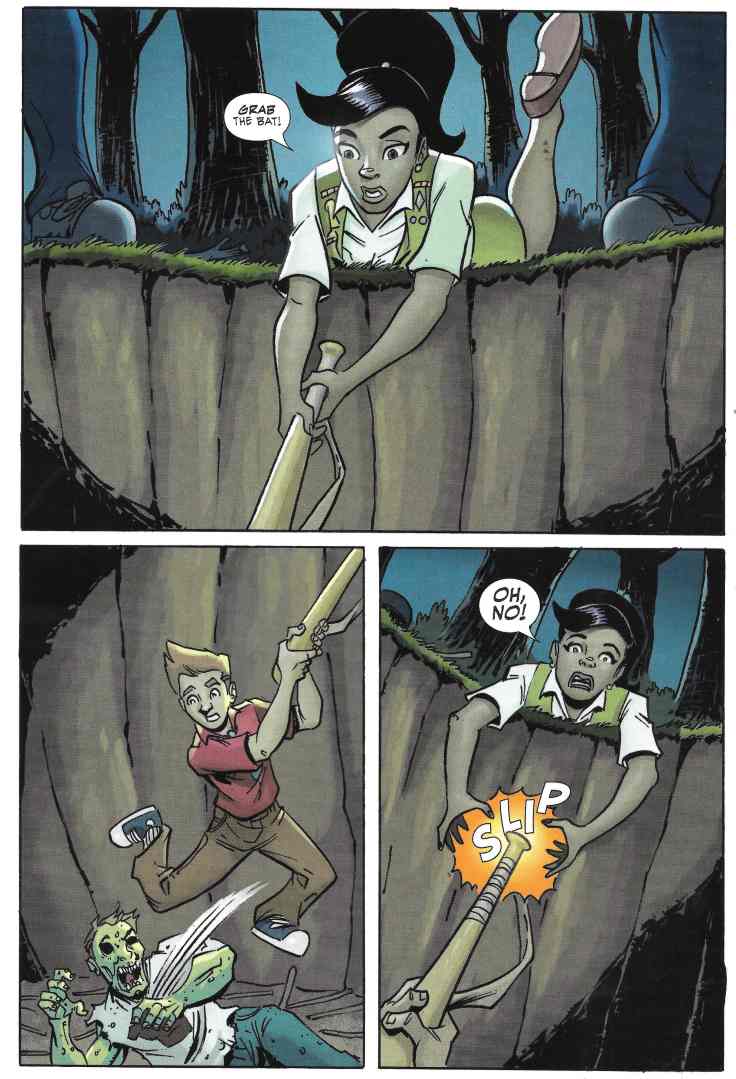 Which ends up being a good thing. 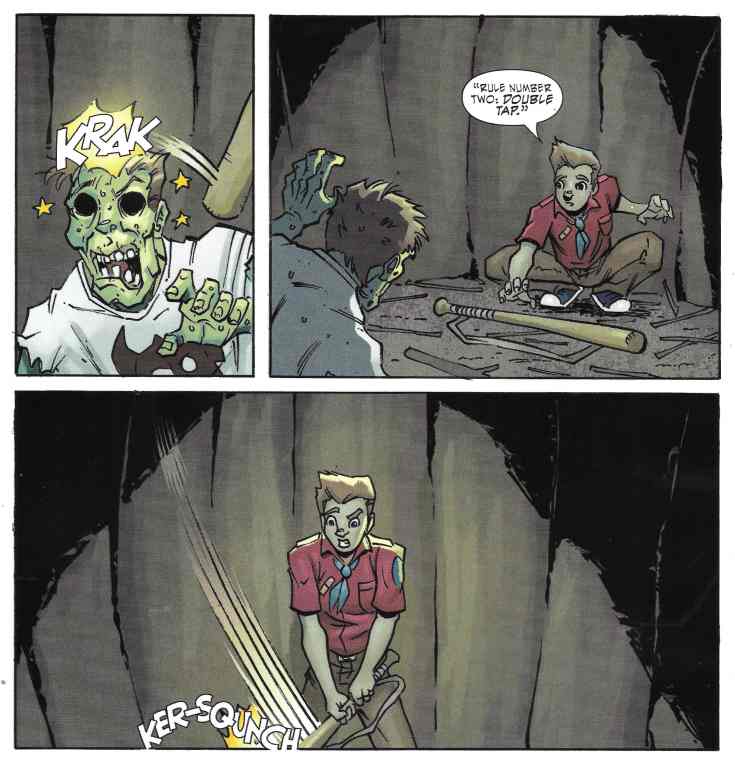 A bit gross, but still a good thing.

And note that even though this gross zombie dispatching happened, the entire affair was off-screen/off panel and not one bit of slimy goo was shown. Even though we get the impression that Chase just bashed this guy’s brainpan in, but we have no yucky mess to cover up for younger readers. Nice job, all ages book.


With a lapse in the zombie-fighting, we turn to introductions all around… 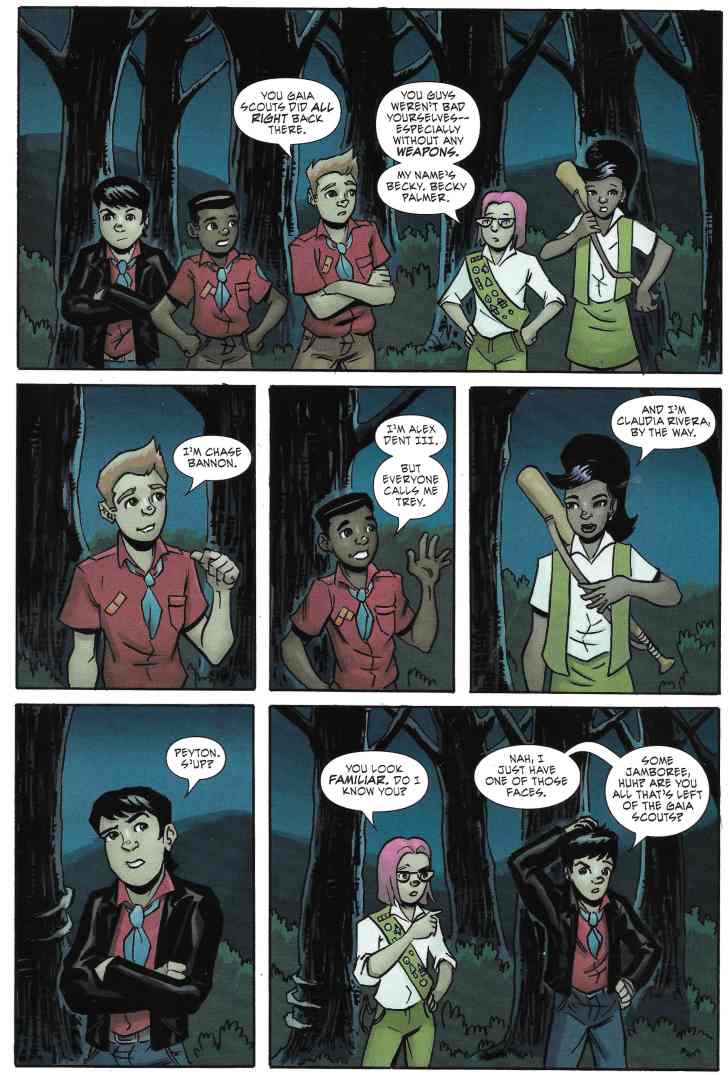 …the girls troop encountered the zombies as well. It didn’t go so smoothly for them. 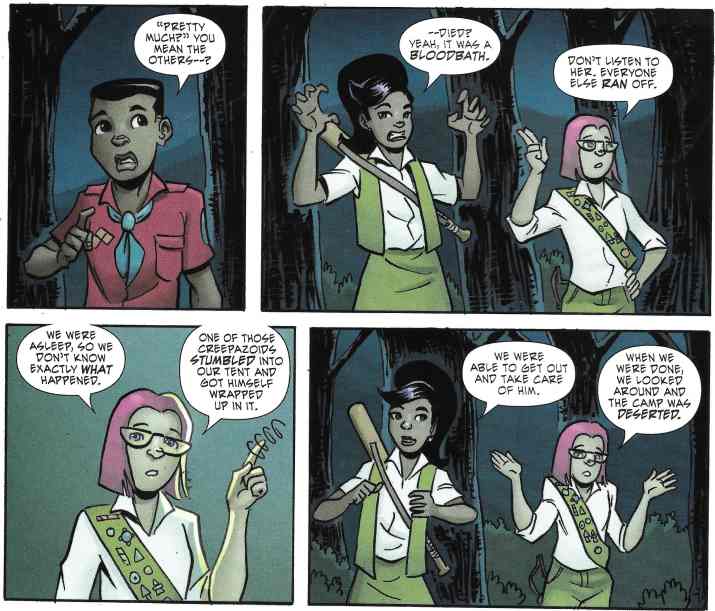 And now we don’t have to worry that an entire squad of girl scouts minus two has been murdered to death by zombies, BUT we have a reasonable explanation why the girls are here alone without it being a downer. At least not yet… 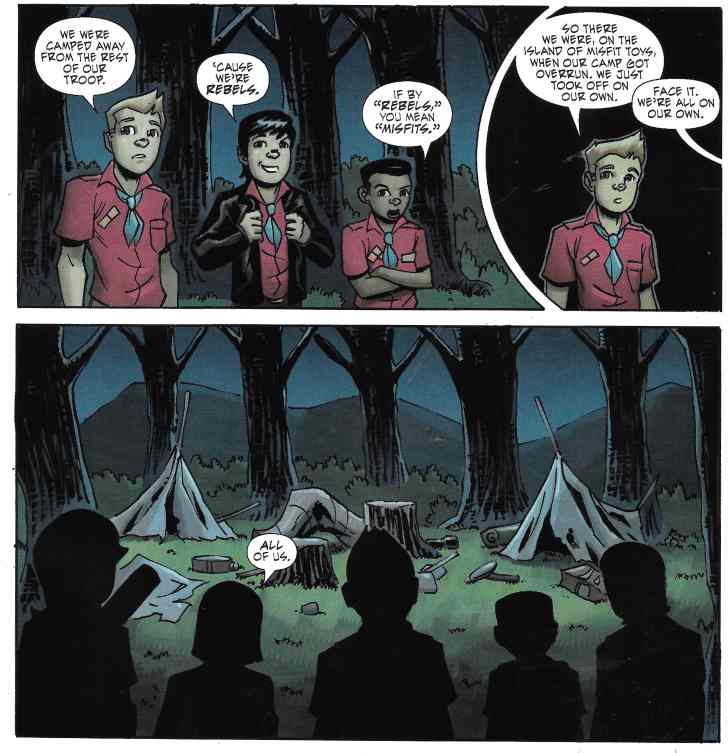 This is a little bit of sad trombone, the fact that they are without guidance through a horrific zombie apocalypse.

Peyton suggests they “team up”… 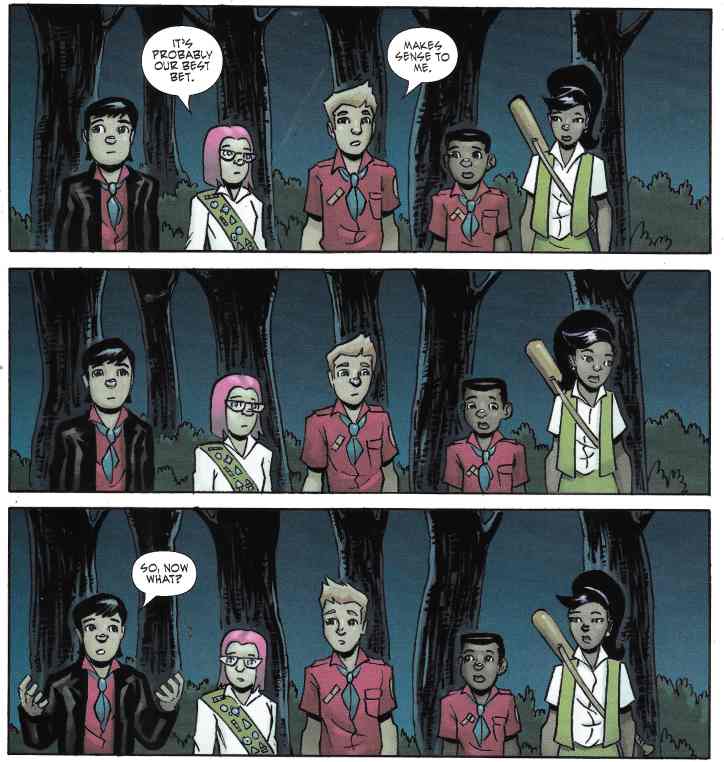 Which leads to a bit of a struggle over who is leading this merry band of misfits. At least it does until the zombies reappear. 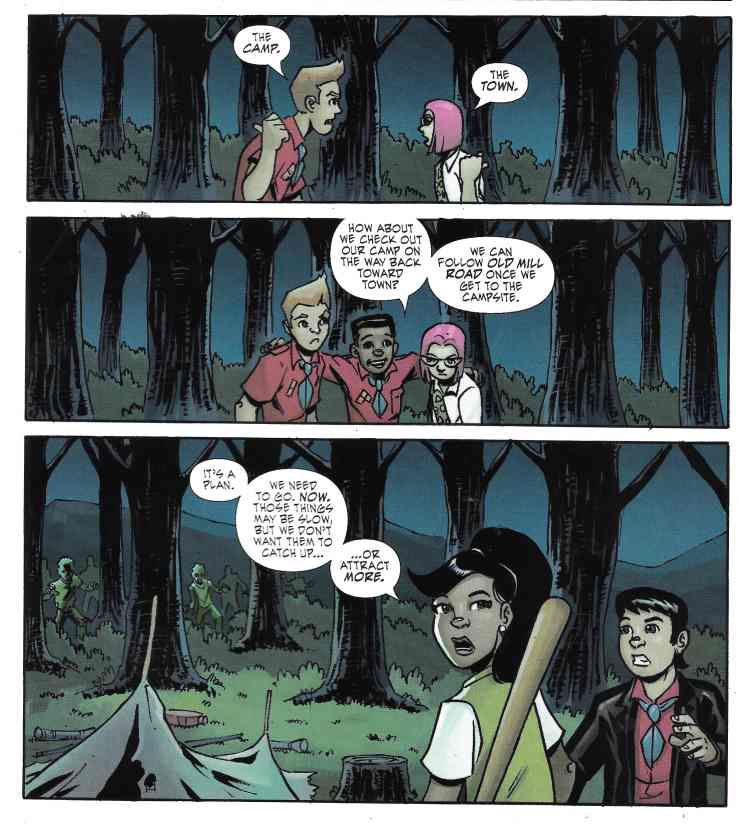 And then we have “The Walking Dead – Kids edition,” which is cool in that they get their own undead story. I guess that makes Becky Palmer this group’s Michonne. 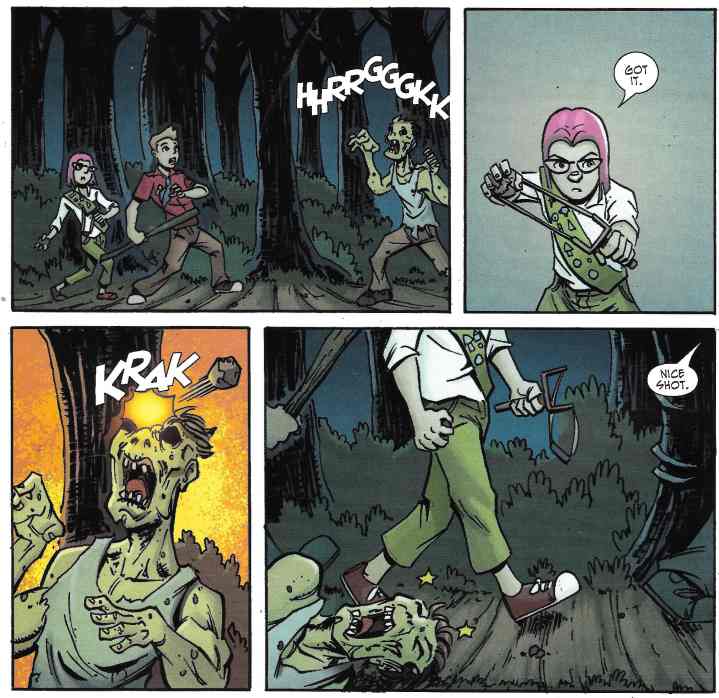 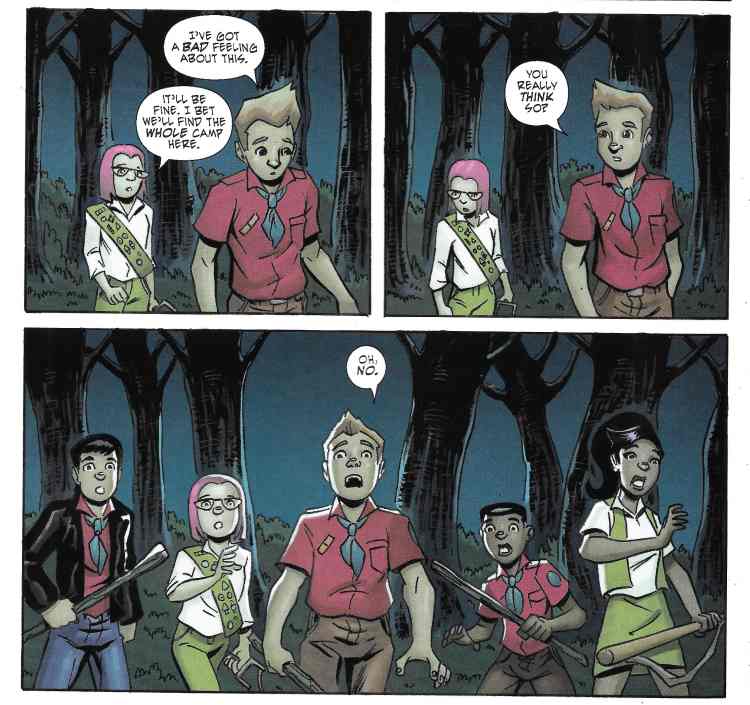 …and it has been wiped away just like the girl’s. 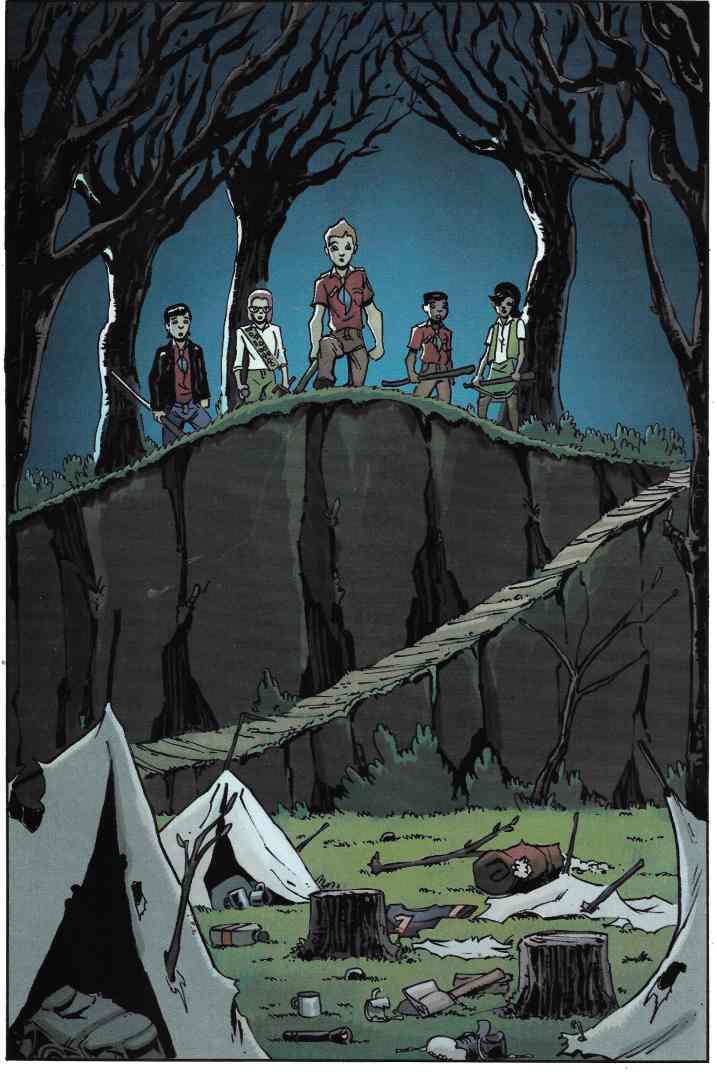 Now the Crapbox being what it is, I have no clue how this ends up. My hope is that there is a happy ending to all this. The fact that our follow-up series doesn’t appear to be the continuing adventures of kids trying to survive in a world full of (possibly flesh eating, we really weren’t shown) green, glowing zombies, leads me to believe there will be parents and hot coco at the end of this little adventure. Possibly s’mores as well.


What I can say is this should be a fun read with your little ones if you’re looking for a “not-too-spooky” Halloween bedtime tale.
Posted by SonOfCthulhu at 3:20 AM