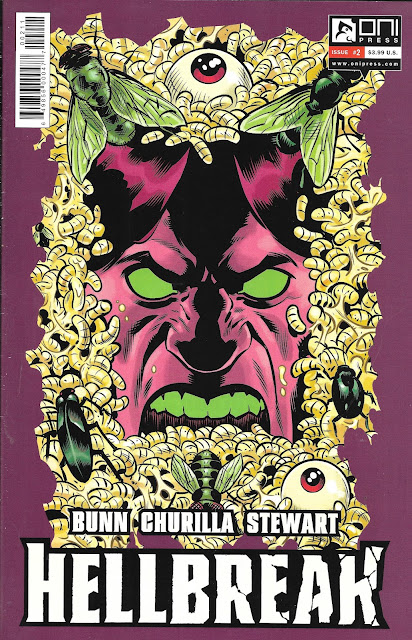 When somebody’s possessed
in your neighborhood
Who ya gonna call?

Here was a hugely interesting concept: What if we could break into hell itself to save the souls trapped there by demons who possess their bodies on Earth? Sort of a “Let’s Get Harry” mixed with "The Exorcist?" What would THAT book be like?

Thankfully this idea came to Cullen Bunn instead of say…me, as I’m not much on the follow through. Bunn however is a great writer with an established pedigree and a penchant for horror. He was the guy who did Harrow County, a book that as last Halloween’s Post-A-Day showed you, needs to be checked out.

Hellbreak looks to have lasted eleven issues and whether that was a final wrap up or just a momentary hiatus, Comic Vine isn’t saying. Still 11 issues is a pretty good run over two years. When I first pulled this issue, I thought it was issue 1 and in reading it I couldn’t tell I had jumped into the story 20 pages behind. That’s either a credit to Bunn’s writing or that first issue was lots of setup on the characters.

I’m going to throw us right in to the demon defeating, since my ramblings aren’t what you came here for…and because it is kind of a fun issue. 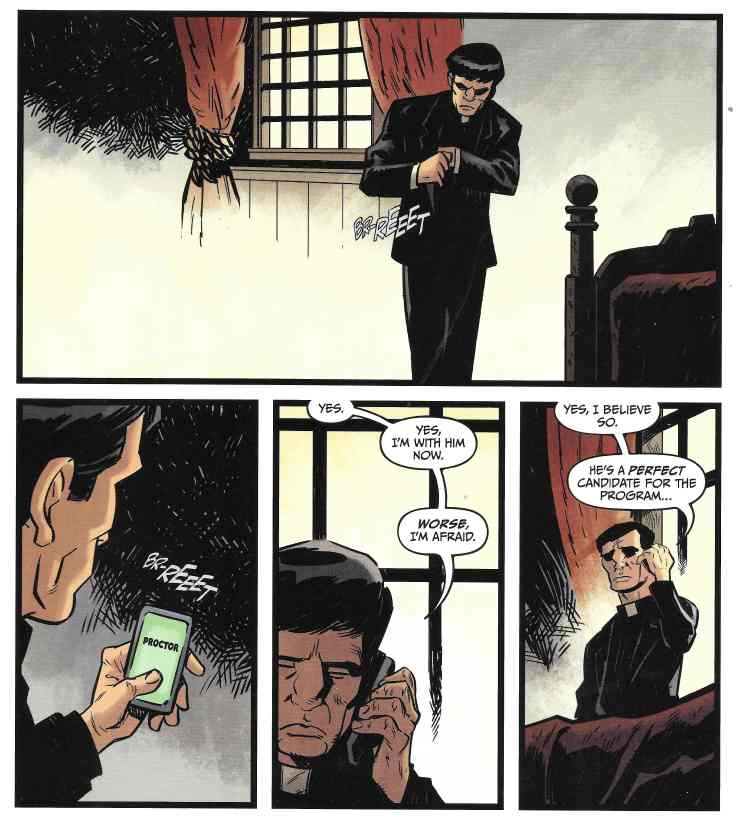 …He is alone, and that makes this a little eerie. To the person on the other end of the phone he says he’s found the perfect candidate for the program. And that person is… 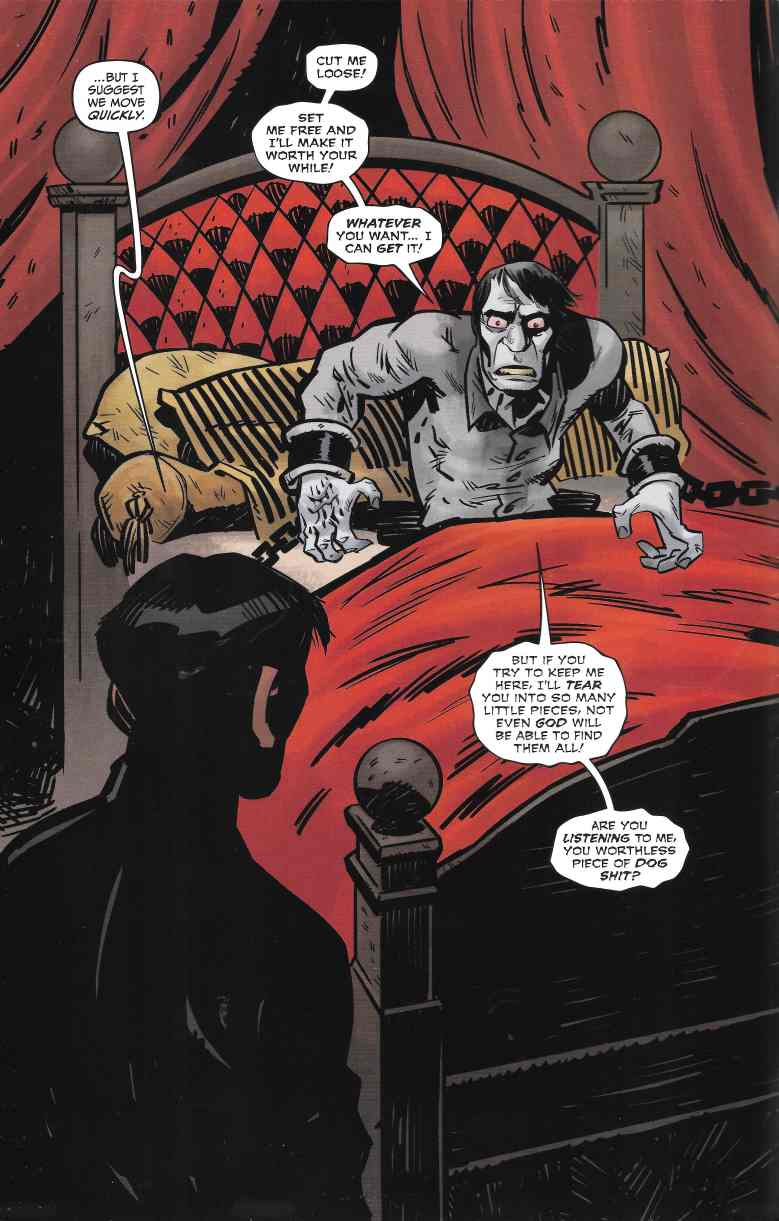 This gentleman: a man by the name of Javier Romero, whose name might be slight nod to the famous George A. Romero. Javier has been possessed by a demon and is currently not himself. He insults the priest, says he can’t help this “meat” referring to Javier, and tells him that his prayers are impotent.

The Father replies with this… 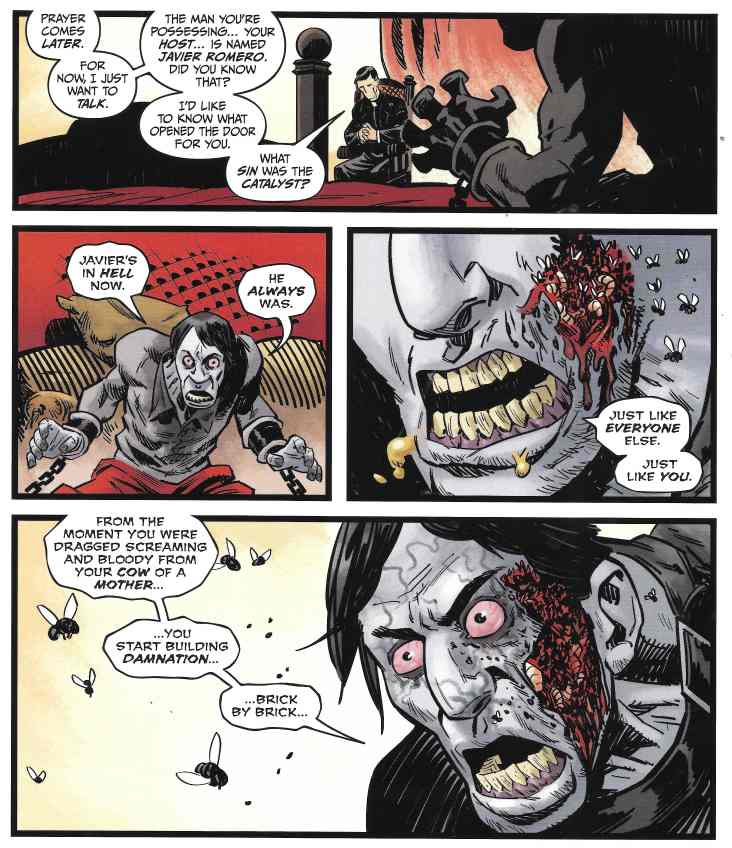 From that disturbing scene we turn to a slow introduction of our team leader Jenner. I’ll admit to mistaking this for issue one of the series because everyone involved is introduced in this similar “name – rank” style. That’s typical of the first exposure the audience has to a character, so perhaps these people didn’t factor in to issue one. Which makes me VERY curious of what was in issue one. 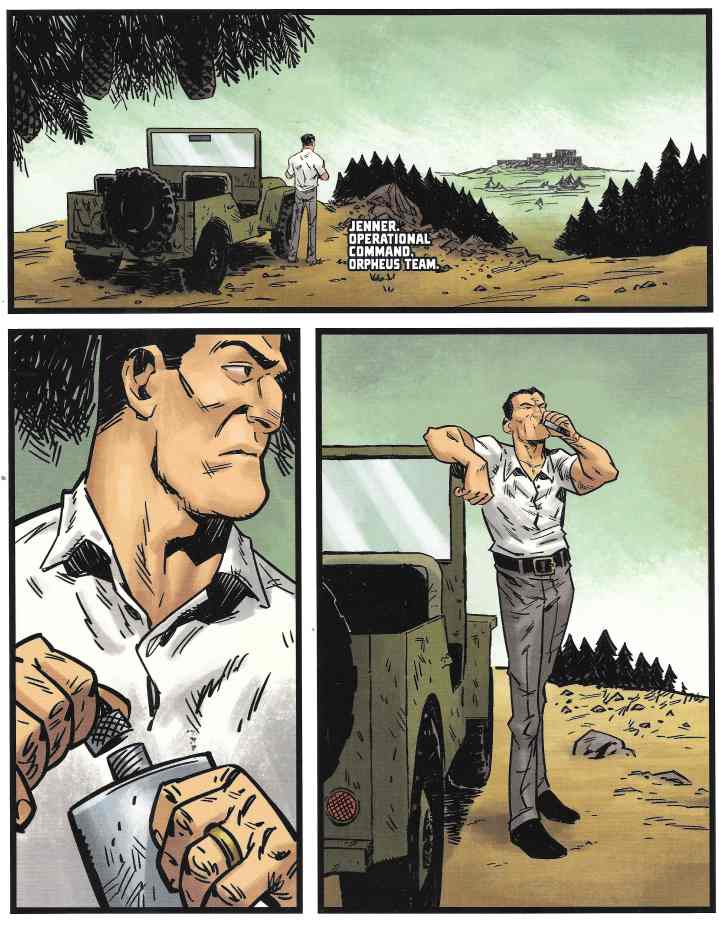 Anyhoo, we get two pages of him sitting and drinking in the North California scrubland. Then we shift to that hospital in the distance there, where Mrs. Romero lands in one of two military style helicopter gunships. She is surrounded by secret service types and black ops guys. The reason for the two choppers is that on the other one is her husband. 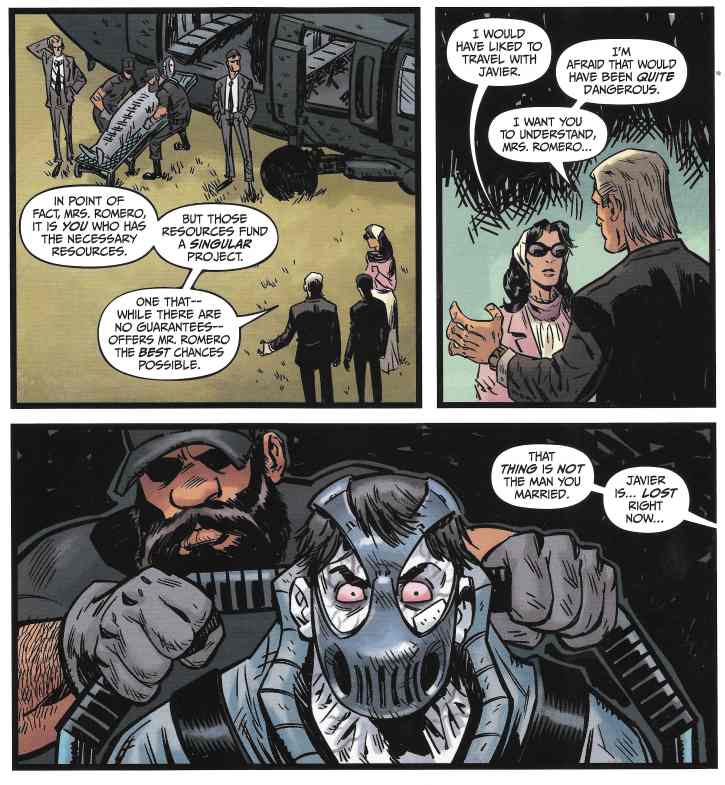 Still quite possessed by the demon inside, as you can tell. His wife is funding this research project to get him back and our Senior Project Coordinator Marik Proctor has given assurances that they can.

Part of those commitments rely on Proctor’s team. Here we find Nadia, the second in command and Joseph, one of the rescue technicians. They are letting us get to know them before the crap hits the fan. As a reader, I
appreciate that. 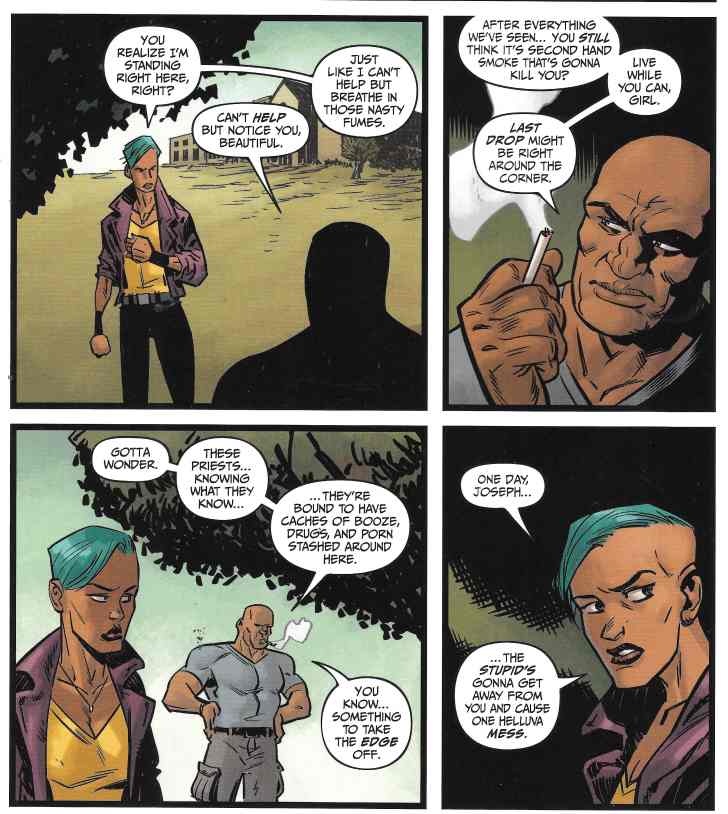 As they head into the facility to suit up for the mission, we next turn to Father Lloyd and the priests who are keeping Joseph under lock and key. Literally… 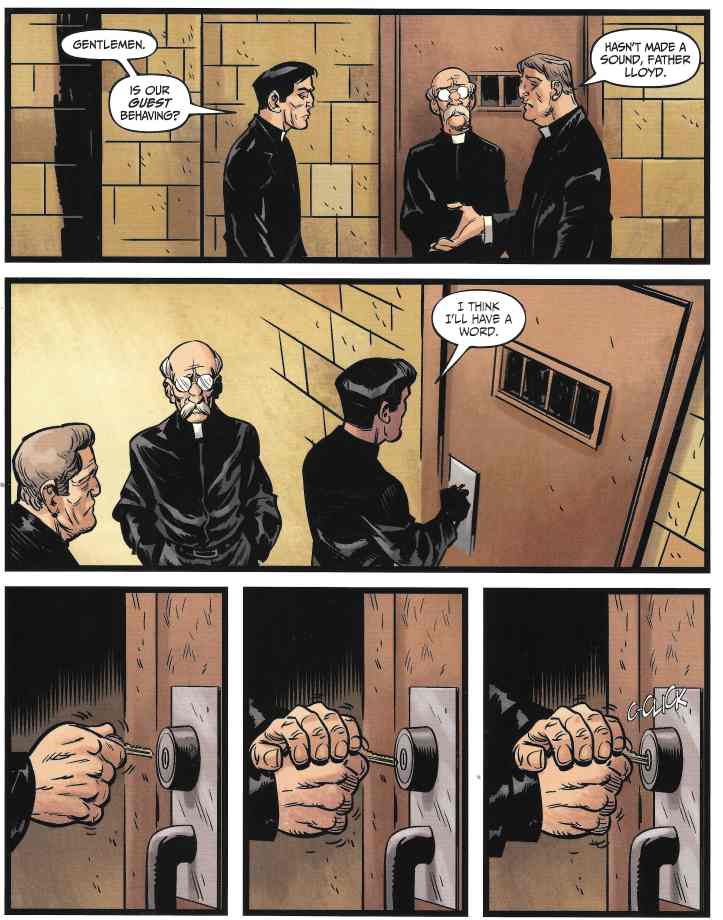 …only Father Lloyd enders the cell with the possessed Javier. He stinks of vile, disgusting evil. Father Lloyd acts like the demon should be the one afraid, and for a moment we feel like he has the upper hand for some reason. 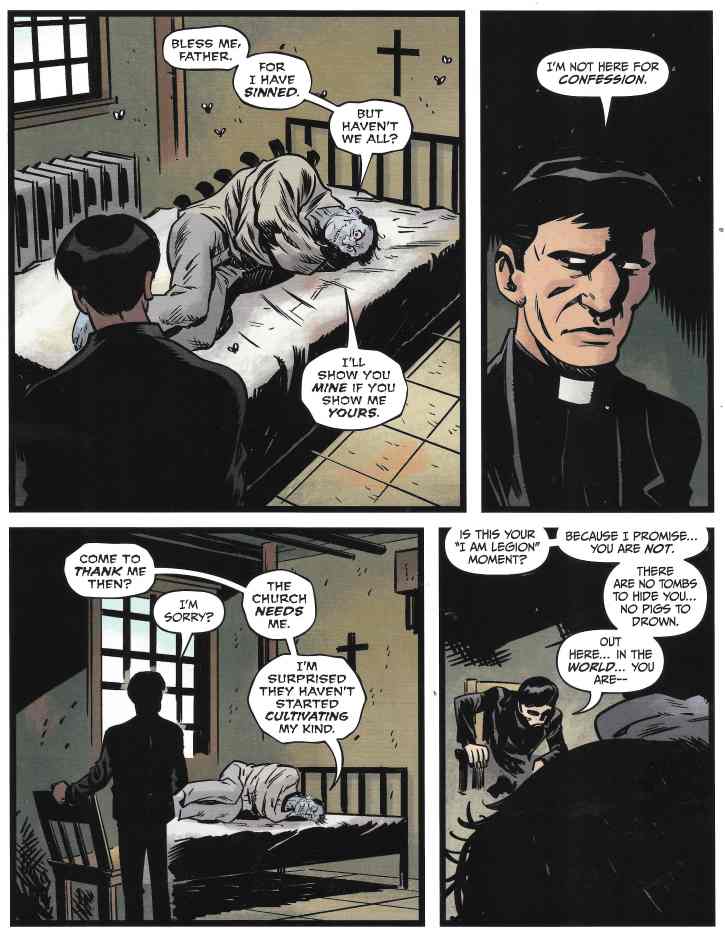 And then the demon strikes at him, and leaves the door open for the audience to wonder who will end up on top of this conflict. 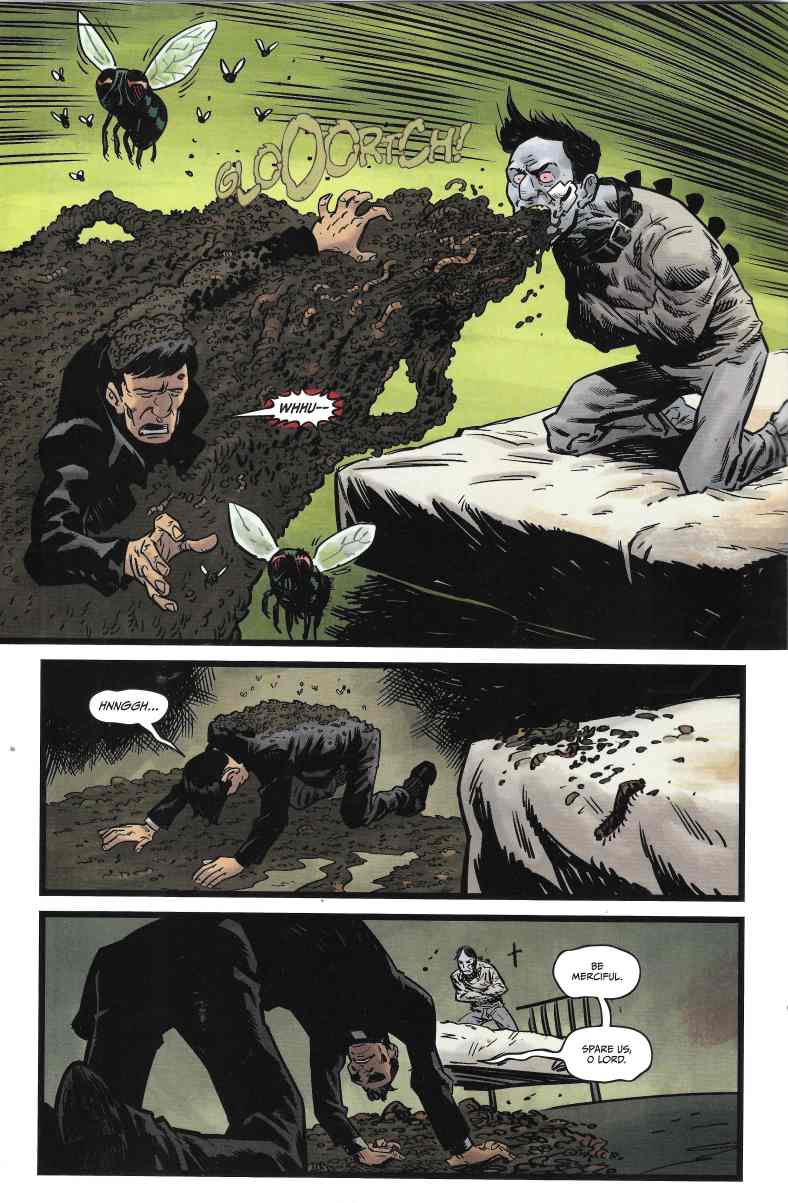 But clearly, Father Lloyd does have the ability to strike at the heart of the demon’s weak spot. I love how vulnerable he looks in that last panel. 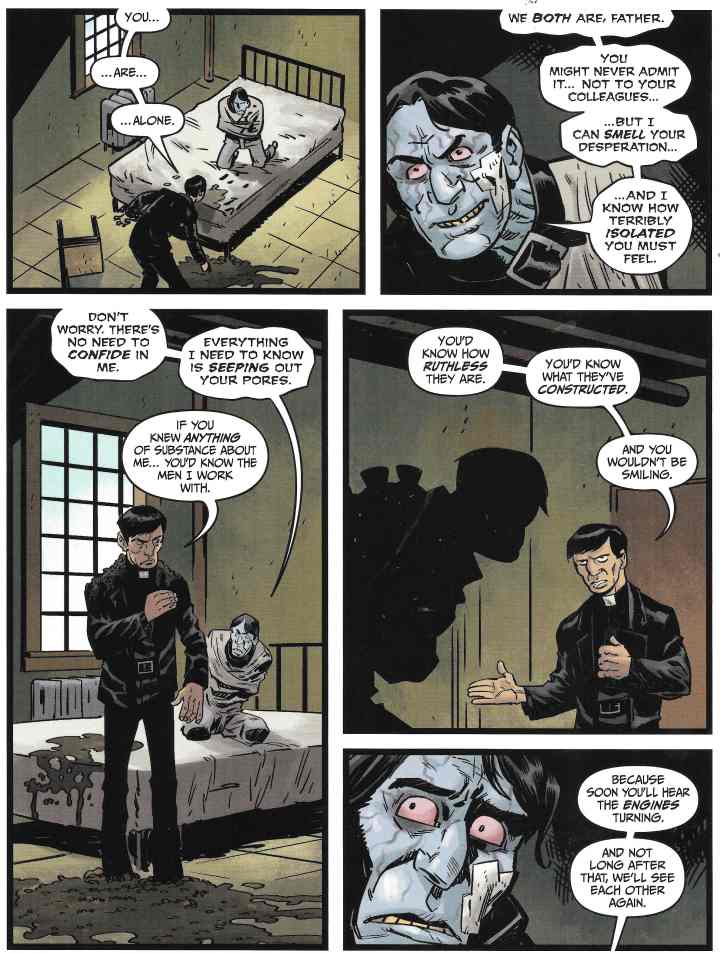 So all this is build up to showing us what it is the Hellbreakers actually do. The frontispiece of the book states that they go into Hell and rescue lost souls. That each Hell is presided over by perverse and vicious gangs of demons. That they are unique and terrible megacities residing beyond the veil and they now have the technology to go into them.

I’ll state that this build up made me SUPER excited to see what kind of Hell Bunn and Churilla would conjure up for us. With that description the sky was kind of the limit, right? Well, the build up in-story is just a strong. We get a look at the insertion machine, called “The Stairwell,” which is maintained by a roomful of scientists. 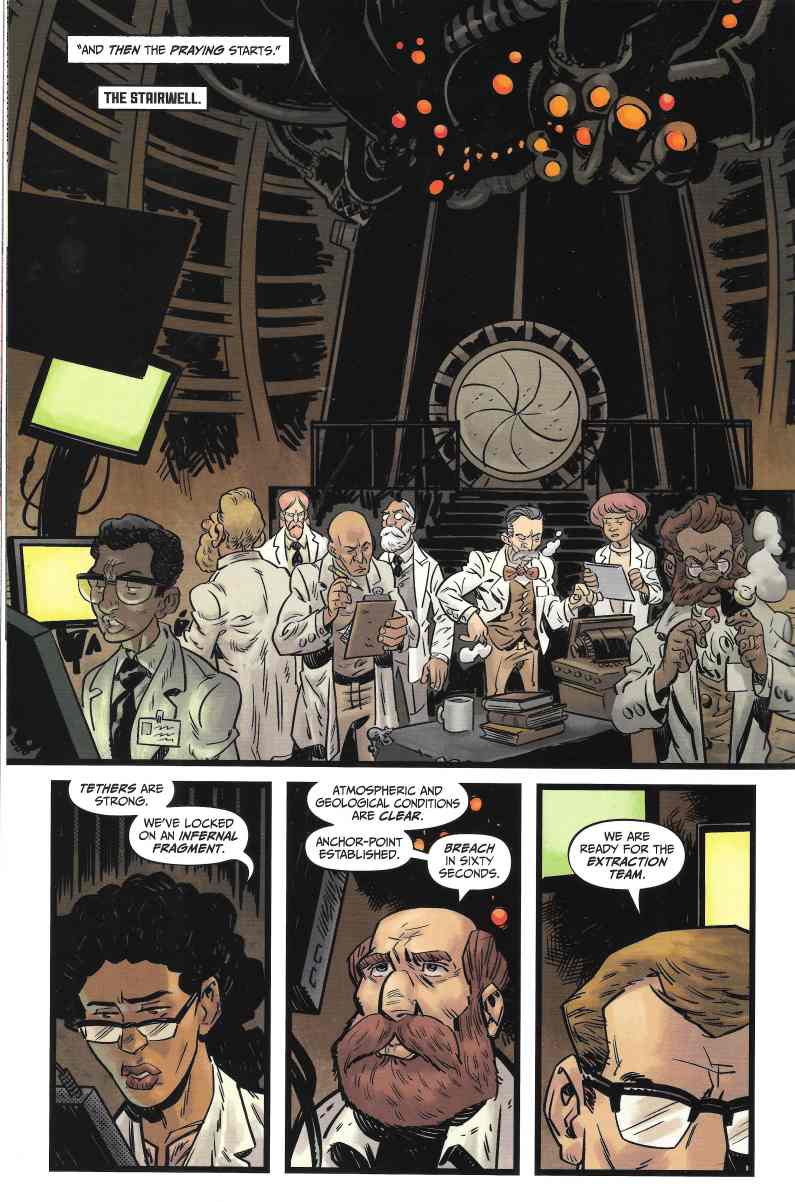 While this is cool and all, maybe a few names here or there would be good. These guys will either never be in danger or can be disposed of storywise without the audience feeling it as a loss. I’d like a few less faces and a few more people, please? However, as I stated, this is still jazzing me up.

Next up we see the Orpheus Team, the hand-picked group of Hell-kickers who will be making good on Father Lloyd’s threat. They are huddled together in a group being blessed by a priest. 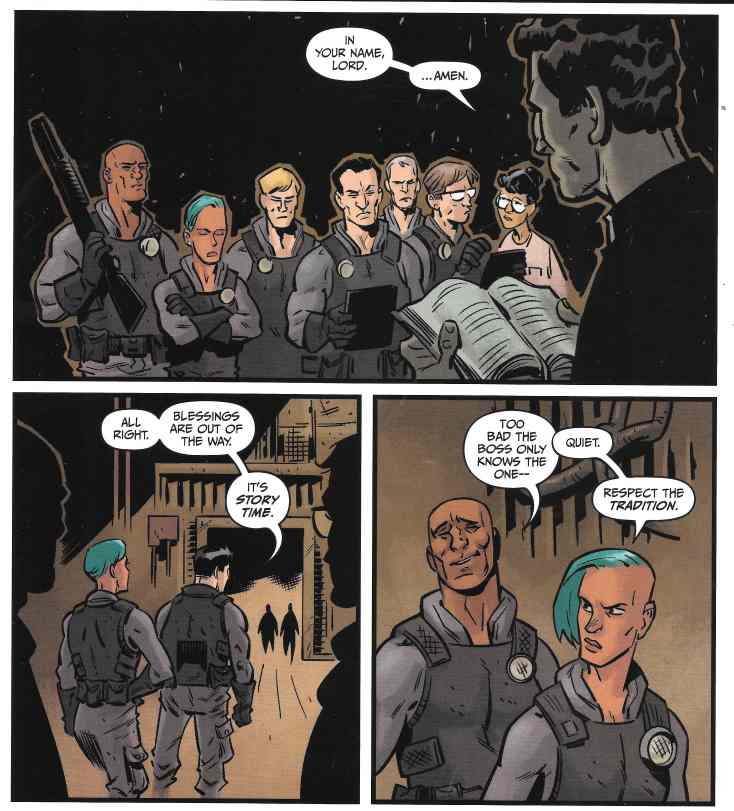 And then they do a tradition of telling a story of how Hell came to be, which is freaking cool… 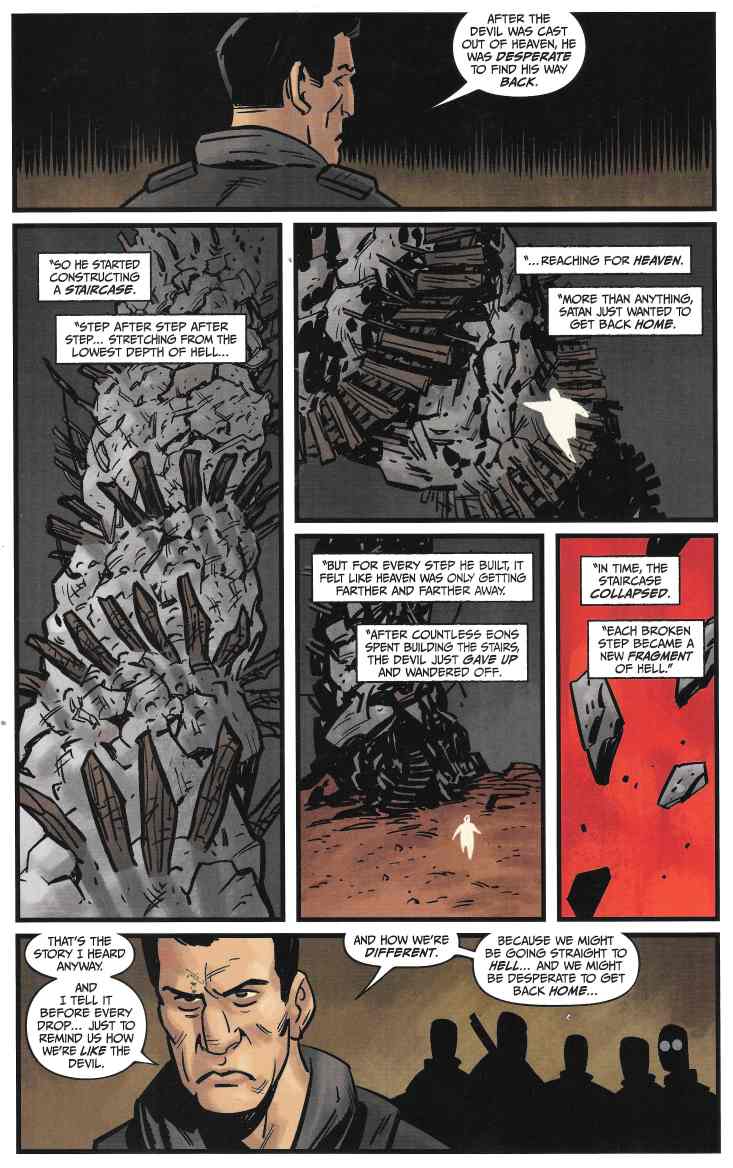 …and leads us straight into the group walking into the open portal, the commander first… 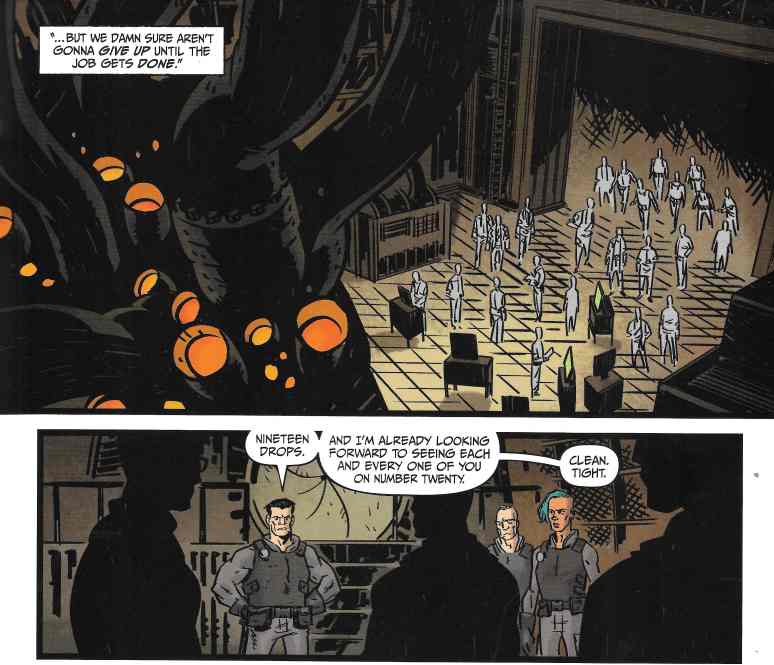 …and smart-ass Joseph bringing up the rear. 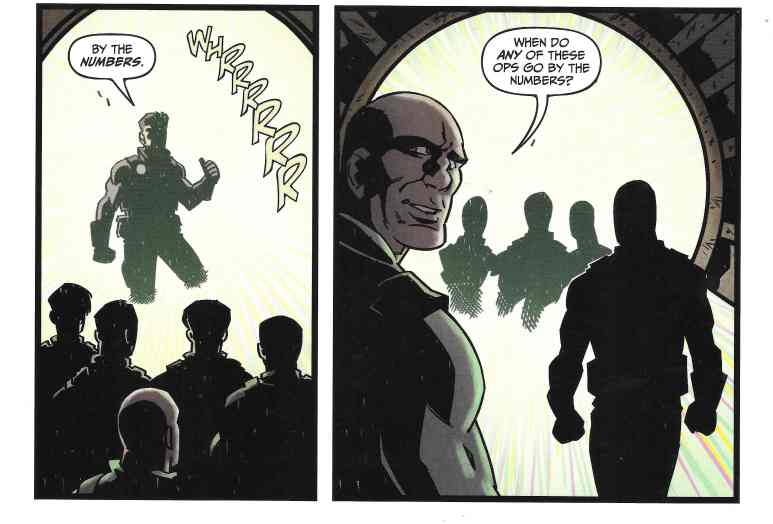 If you are like me, you are on the edge of your seat here. What kind of Hell will the guys appear in? The cover mentioned “megacities with vicious gangs” which sounded so Judge Dredd that I wondered how that could be a Hell. It gave me hope that we wouldn’t end up with… 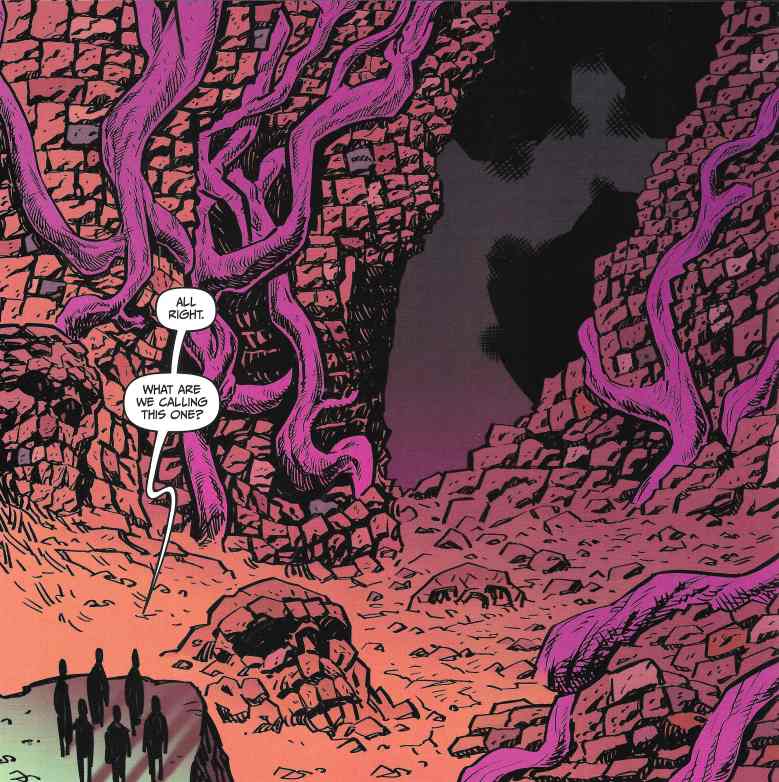 …a big red underground cave. I mean that’s been done to death. They spend a few moments discussing what to name it (I’d call it “Cliché”) before going with Technician Franklin’s suggestion of Meramec. We start meeting other team members, too as Jenner has them “throw a pebble in the pond,” a term which isn’t explained but seems to give the co-ordinates to Javier’s soul.

Then we are off exploring Hell… 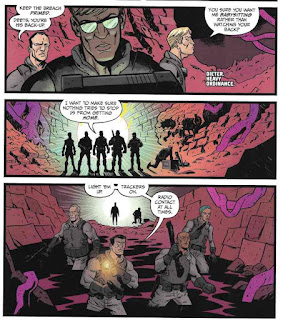 …and by “we” I mean that literally as this next field tech is…well, he’s ME! 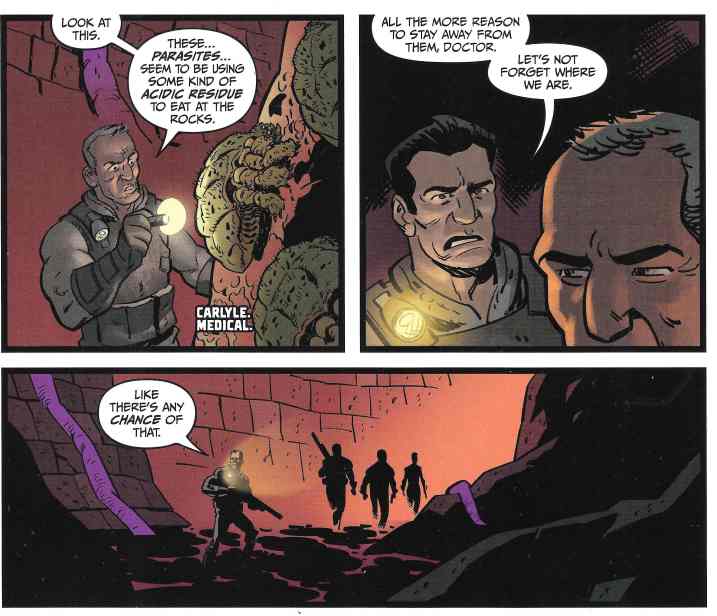 HEY! ME! Get out of there. The medic always dies first to prove that no one will get out of this alive. Don’t die, me!

And as if to prove that exact point, it appears on the very next page that Jenner survives an earth…er, HELLquake only as three other team members get crushed to death. 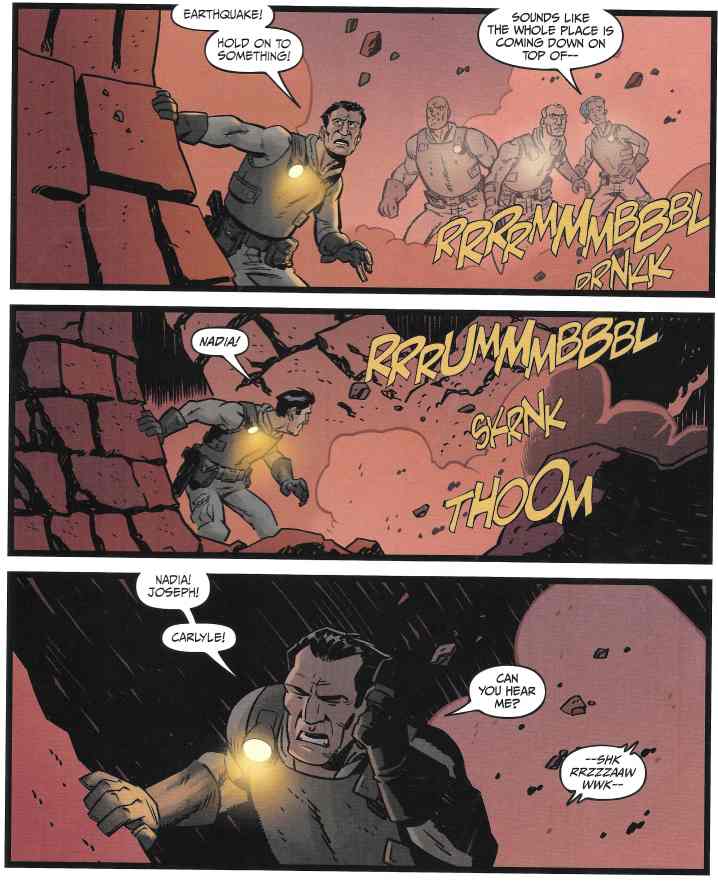 But WAIT! They survived but are just split off from Jenner. And they can’t radio him because… 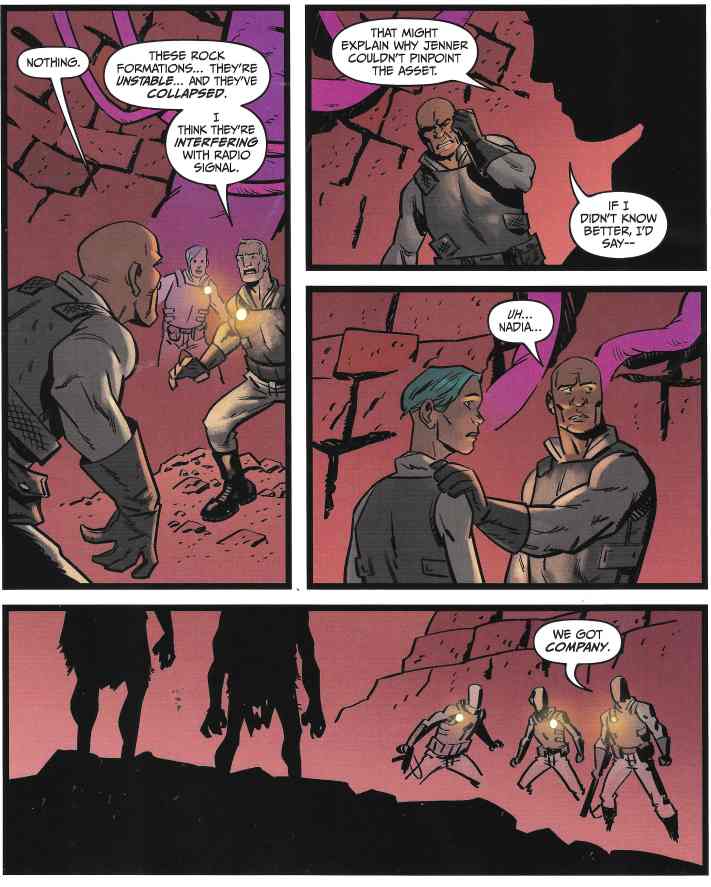 …and those figures end up being the souls lost here in Hell. The take on the visages of ghostly white children and the look IS surreal and a bit haunting. Good job on this, I feel a few tingles. 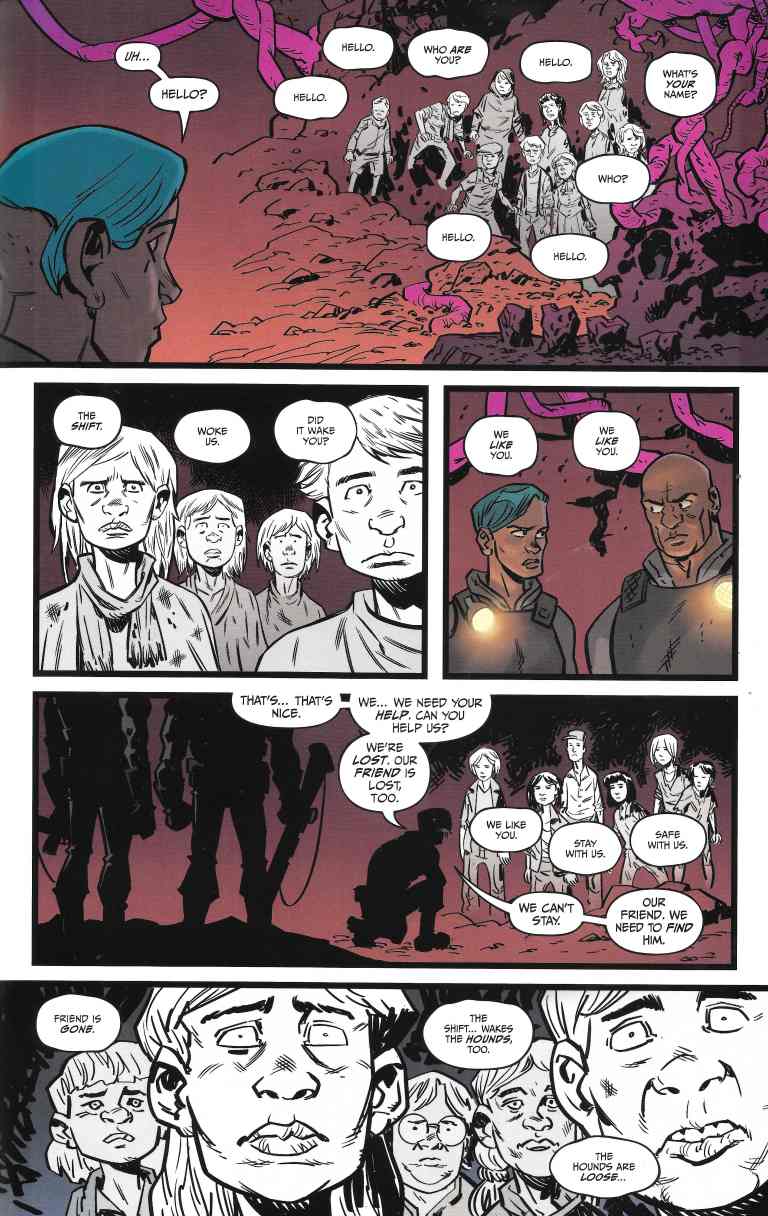 As for those hounds they were talking about? Looks like Jenner’s trip is about to go to the dogs. 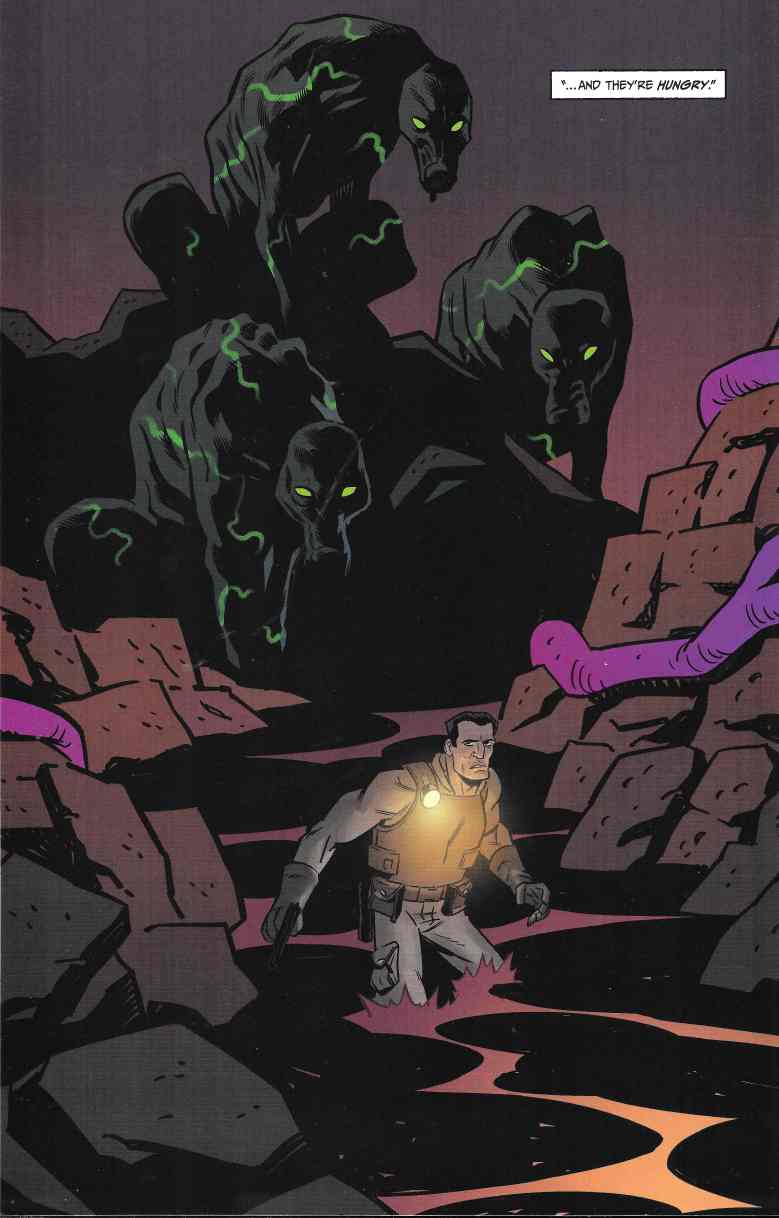 Initial thoughts on this one are positive. I liked the look of the book and the intriguing concept for the series. I don’t want to see the same Hell each time though and feel the writer and artist went with something safe this first time out.

It’s a concept I hope hasn’t been abandoned, as I feel the book has a lot of promise going for it at the end of issue two. Whether or not that's true by the end of issue eleven remains to be seen.
Posted by SonOfCthulhu at 2:24 AM