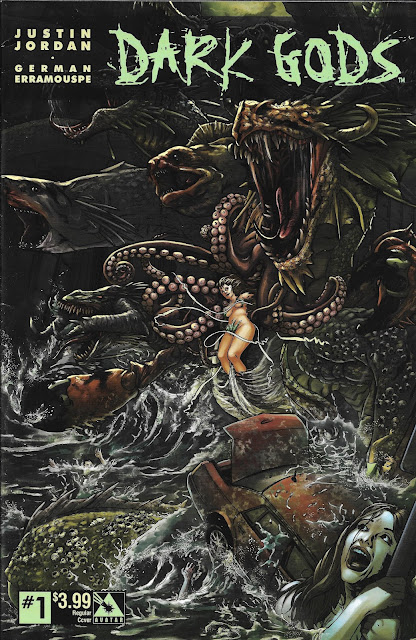 If it’s tentacles and Elder Gods, it must be Lovecraftian?? Or NOT!

You ever have a book that you initially thought was great, only to revisit it at some point and feel you were dead wrong?

Dark Gods is one of those books. The story moves along alright, I suppose, this being the first issue of a six-issue mini. But something about the art is off. The colorist does a remarkable job “fixing” the art, but there is something extremely flat with his profiles that just feels off.

And by his, I think it’s Michael DiPascale. But I’m not certain. There are so many hands in this making “art” that it is hard to be certain.

That said, my second run through does still hit on most cylinders although this issue leaves an odd feeling that following issues will go in much different directions, both tonally and plot-wise.

We start with Josh Resnick, a corporate cog in a big company who has taken it upon himself to do a little spying. And that spying has paid off in finding evidence of corporate misdeeds that are so bizarre that he just has to become a mole for a secret government contact. 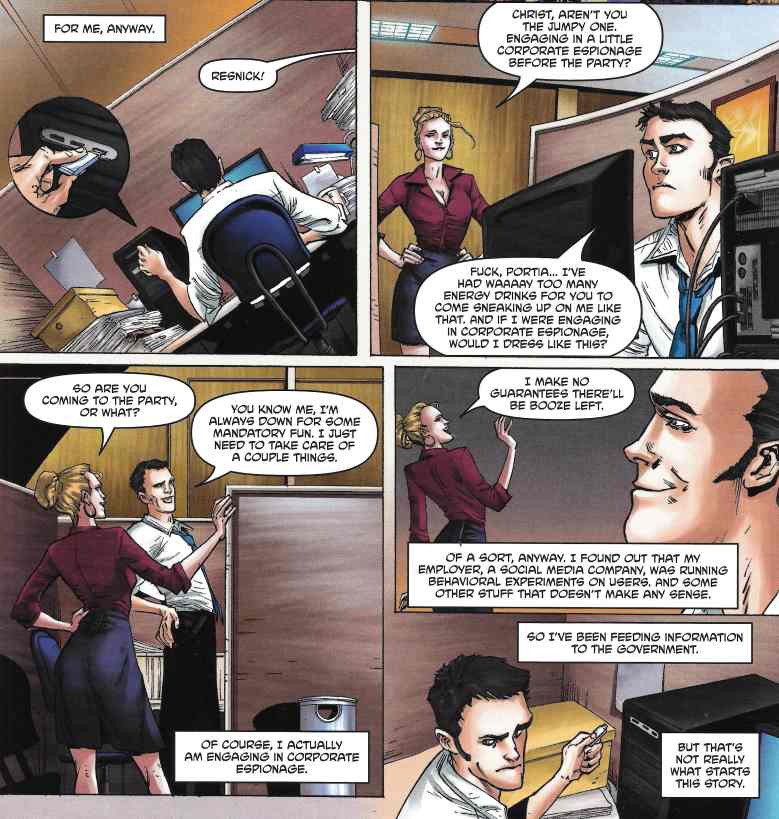 Here he is trying to sneak out some last minute information the night of the big company party. His co-worker Portia comes by and scares him so bad that the forth panel make his face look as flat as a crepe. Seriously, this is my issue with the art: one panel every page or so looks …off. Let me know if I’m making too much of it.

Anyway, back to Resnick’s tale, which already has the race gun fired and is off and running. His agent sends him a text on the company cell phone. That’s something that is bound to get intercepted, but the message is an urgent one. It begins “You are in danger. Leave the building…” 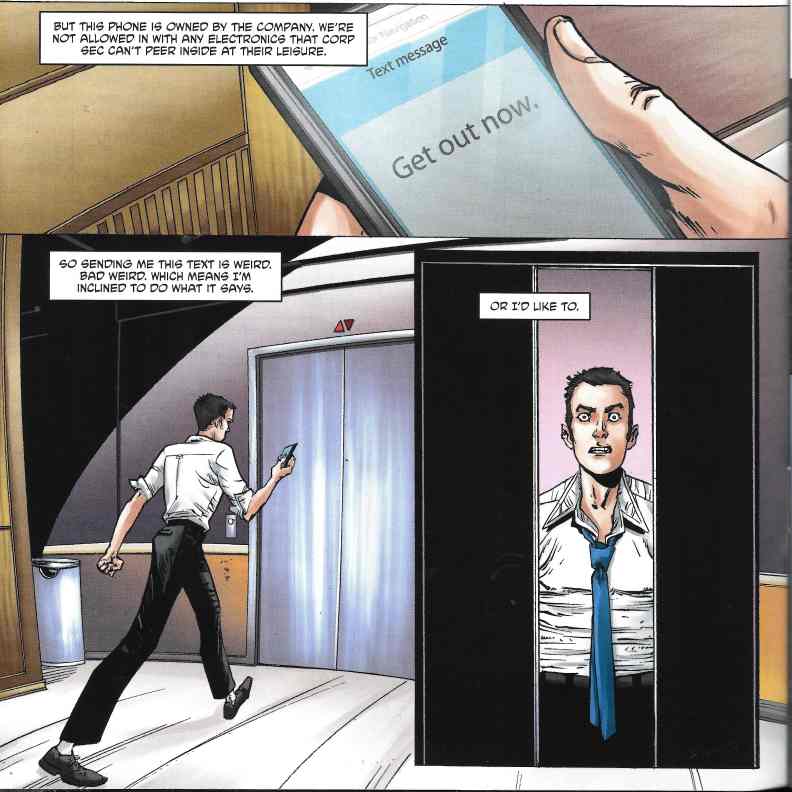 Resnick makes for the elevator, but it looks like he should have chosen the stairs. As these two “security guards” force him to attend the company party… 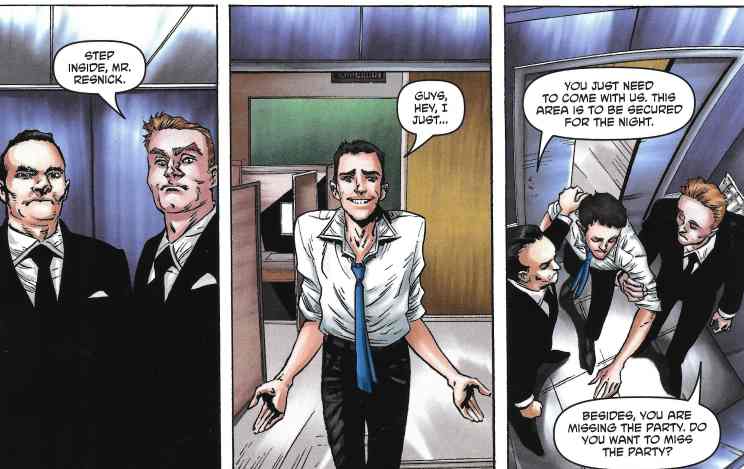 …which is held in the basement of the building in a tunnel straight out of one of my D&D games. 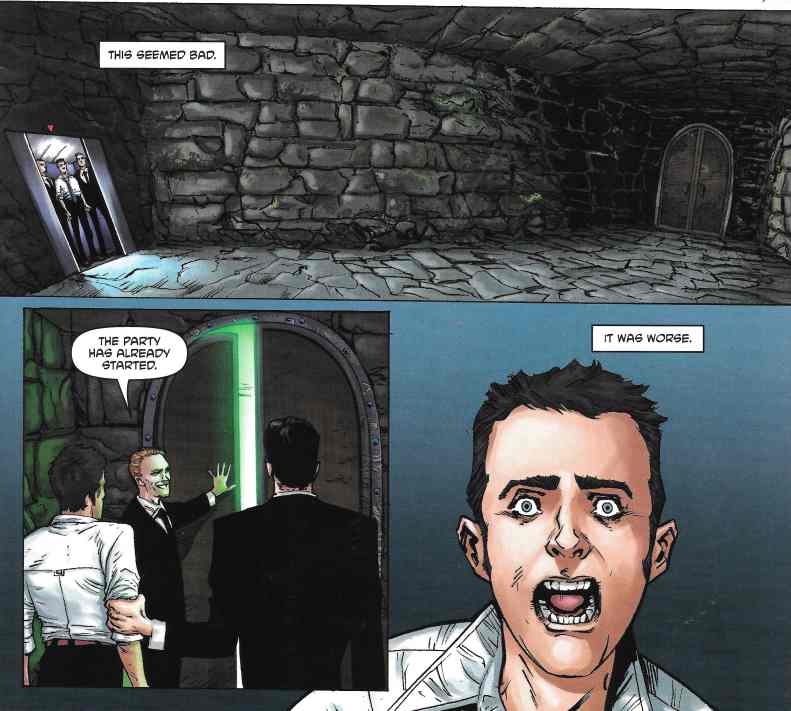 And appears to be in “full” swing… 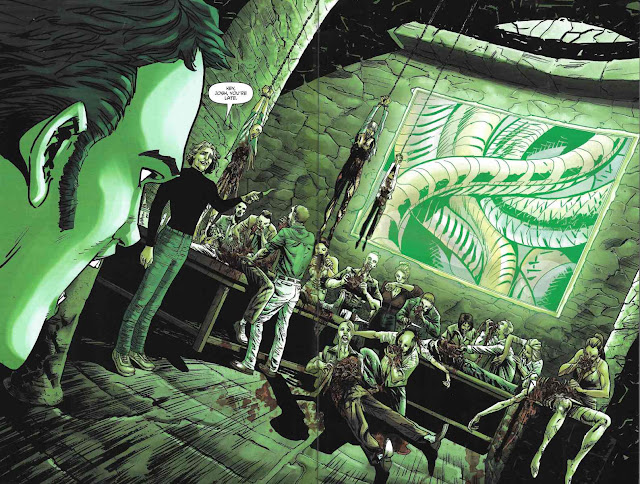 This doesn’t look good for Resnick. I mean, I don’t see any vegan options on those “hor d’oeuvres” and I’m not certain he’s going to live long enough to complain about it come Monday at the watercooler.

Then we get some trippy visuals provided without any segue that recounts how humanity has always been a slave to crazy, other-dimensional powers that wastes about four pages… 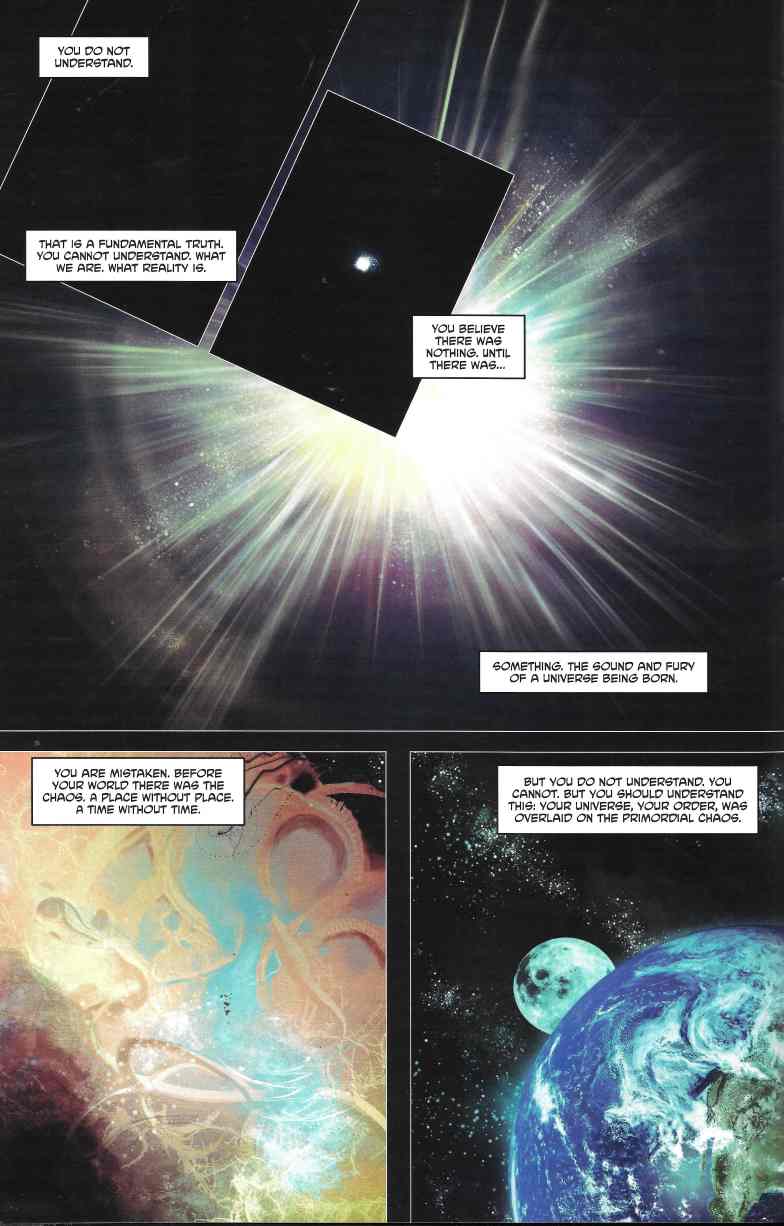 …and does a decent enough Lovecraft spin… 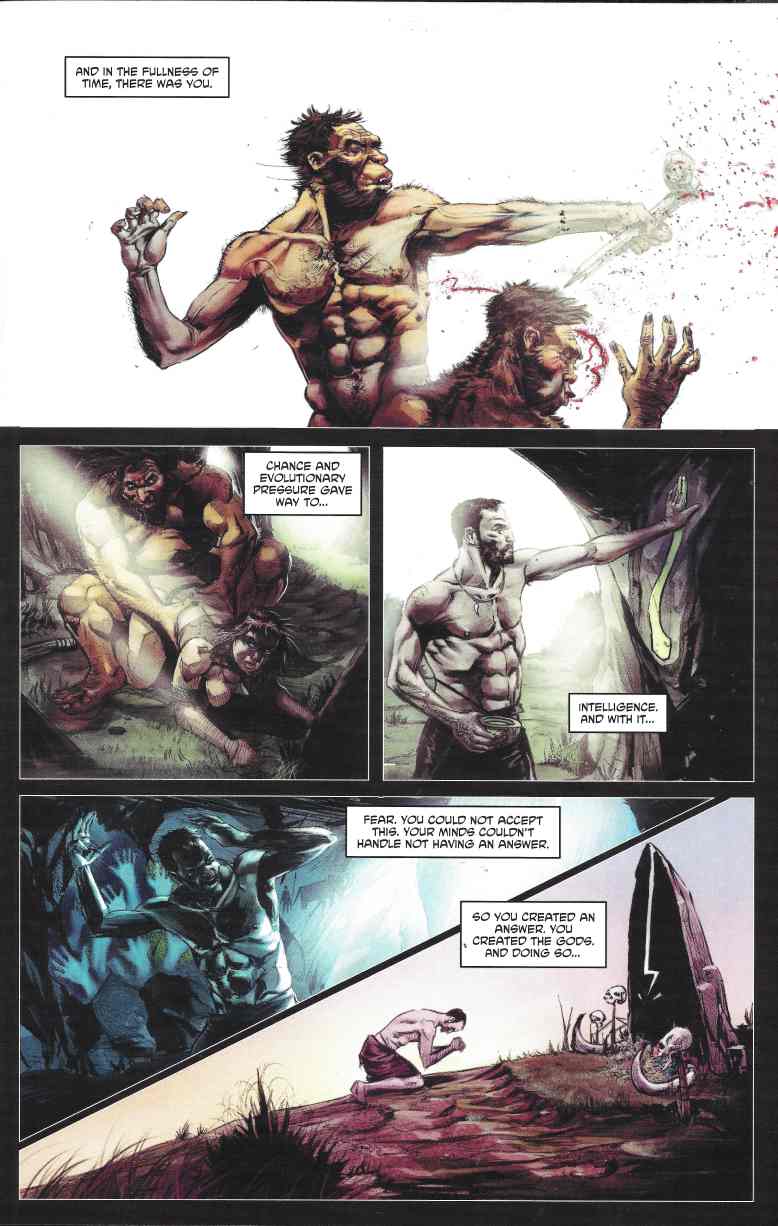 …without ever mentioning him or his beasties. Copywrite issues, I’ll bet… 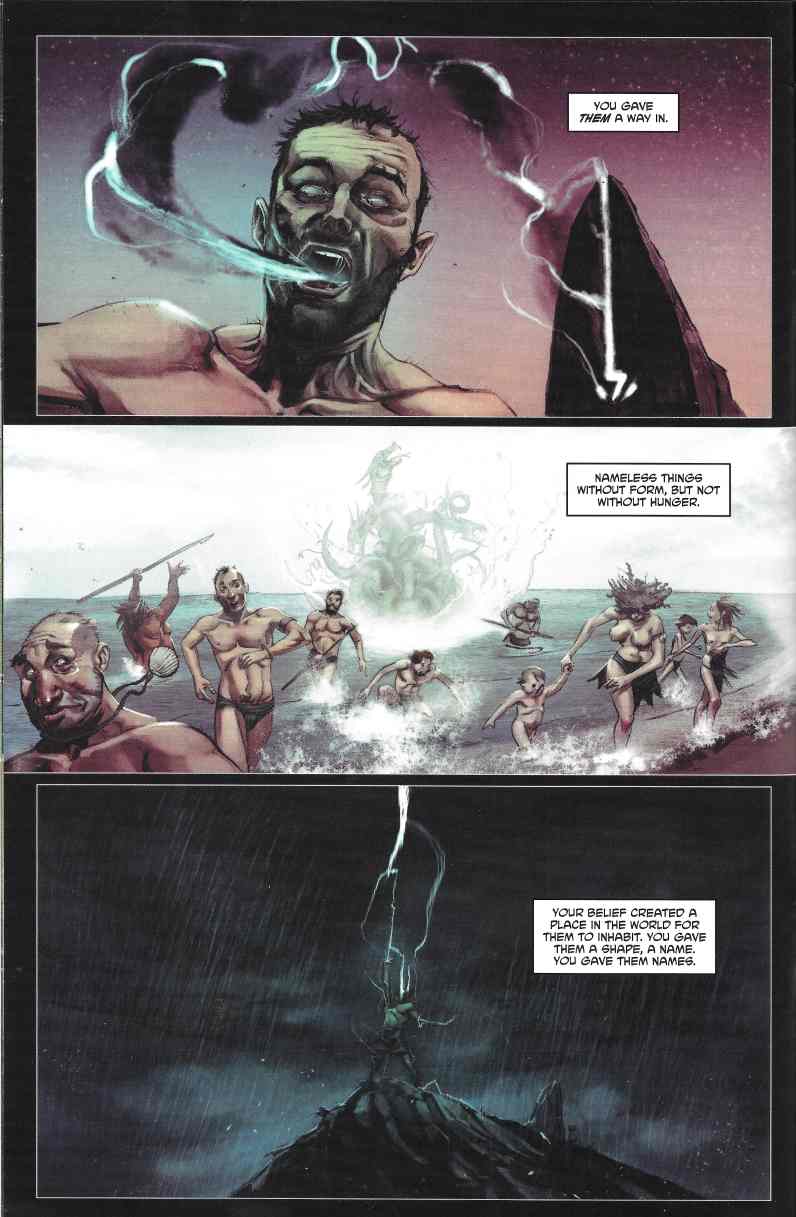 …And the art is neat and different. 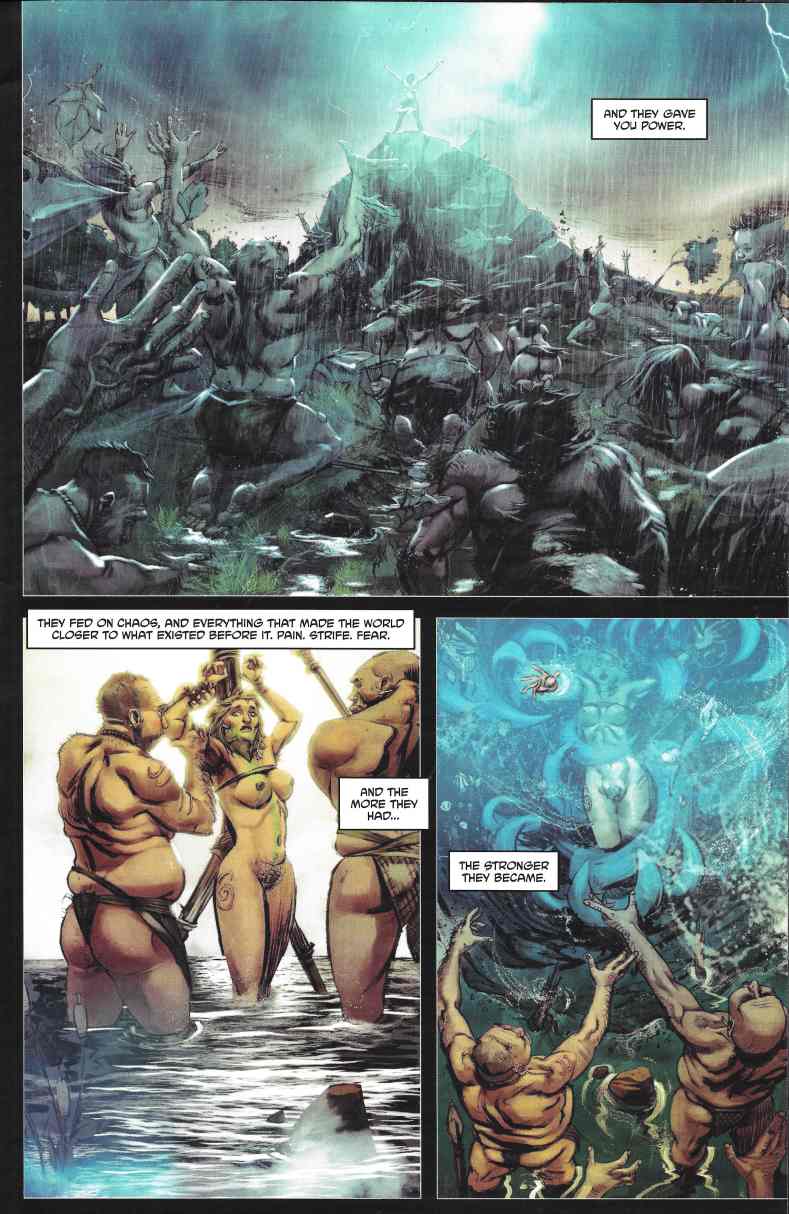 Suffice to say, the monologuing by the CEO leads back to Josh, in a pretty bad pickle. Appears it is review time and Josh hasn’t been a stellar employee. You know, what with him reporting their activities to the government and all. Looks like he might get cut, in a very literal manner. 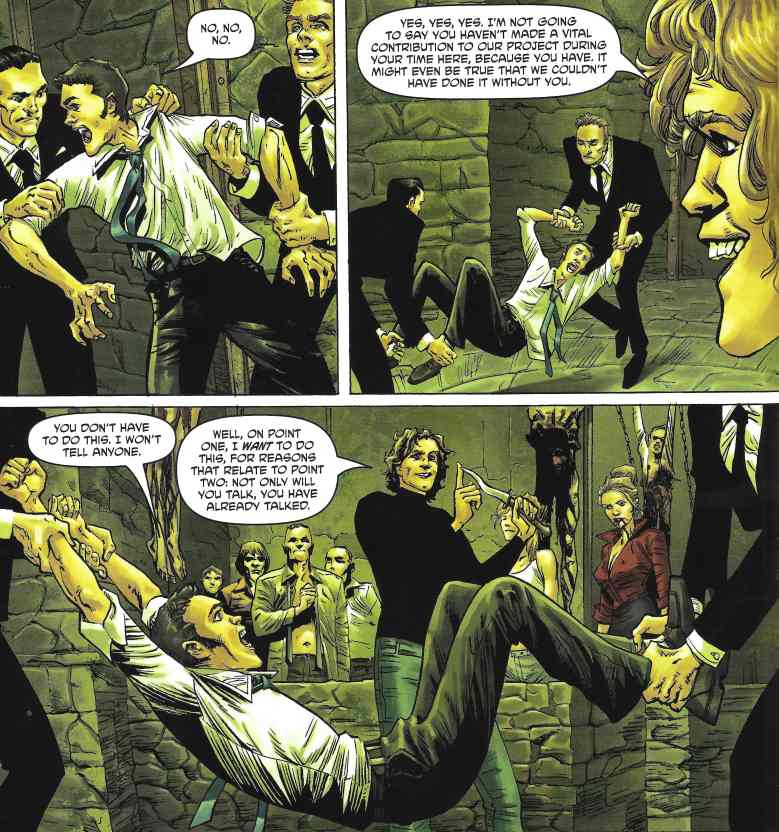 And I wouldn’t count on that peer review from Portia helping him out any.

The CEO makes a long speech about how he wasn’t part of the team and won’t live forever in their new world. He says all this while holding a knife up in the air, poised to stab him. Josh’s cell phone rings. 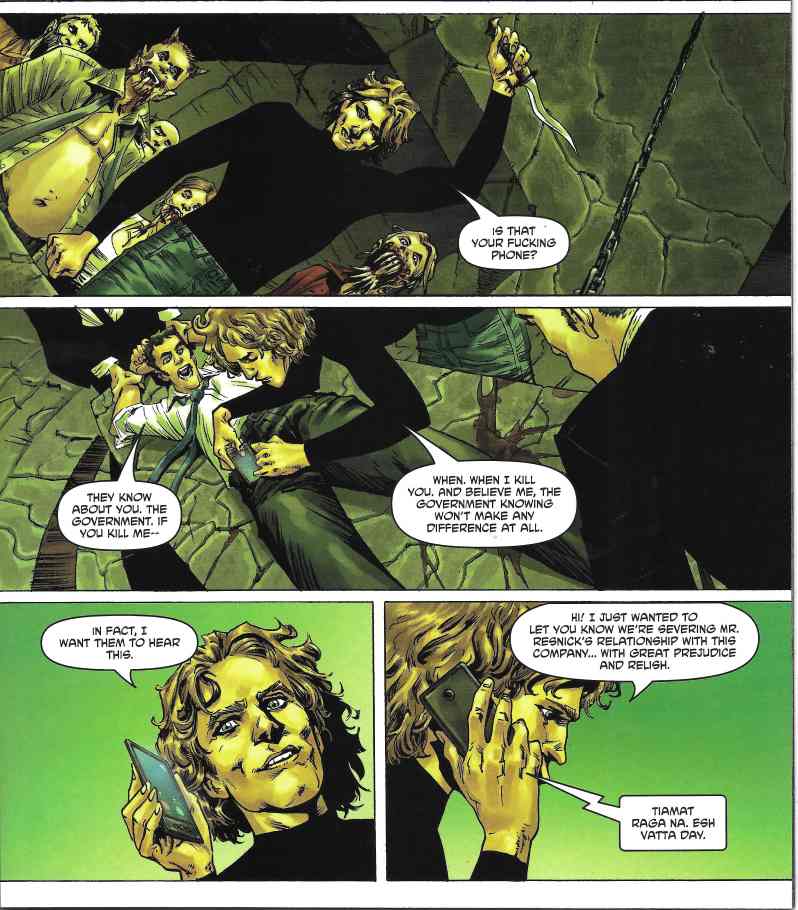 And with one magic spell uttered by cell phone, the demons all have epileptic seizures. Josh even thinks about helping Portia, but dude? Come on. She’s full on demonized. Josh beats feet out of there. 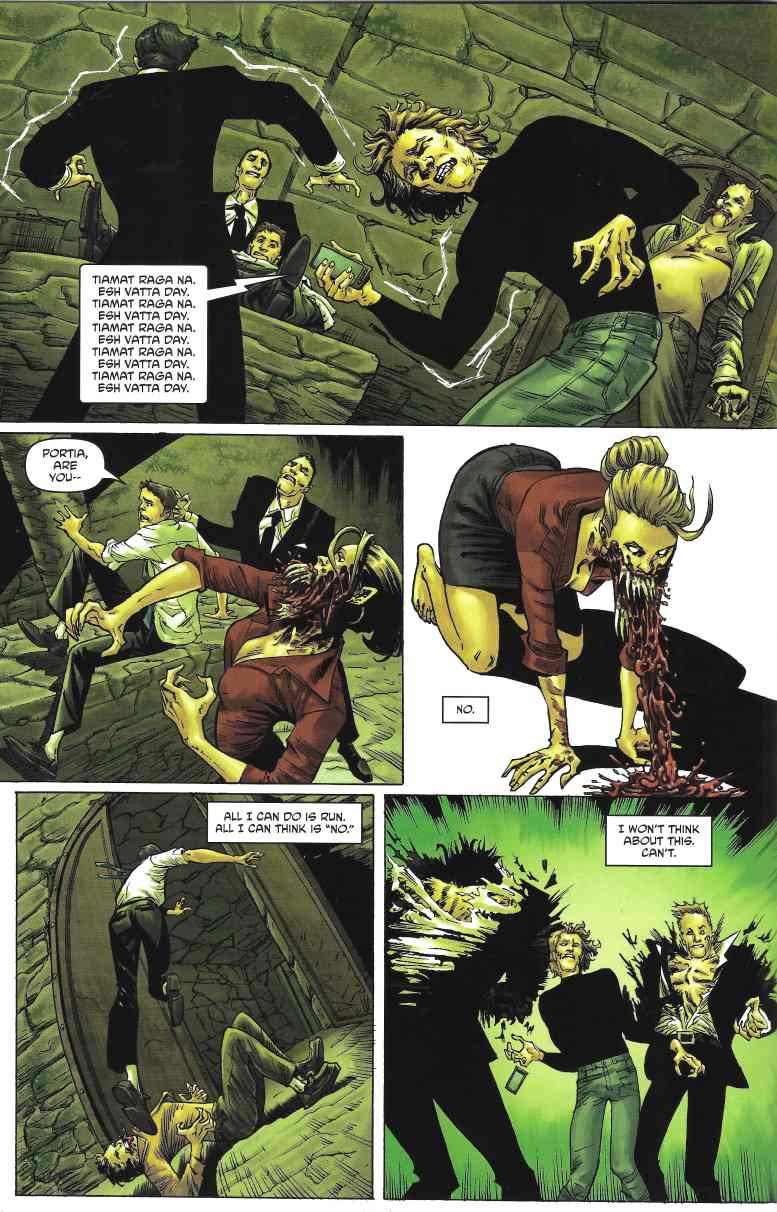 Finally the CEO musters the control to smash the cell phone, just a Josh gets an elevator. 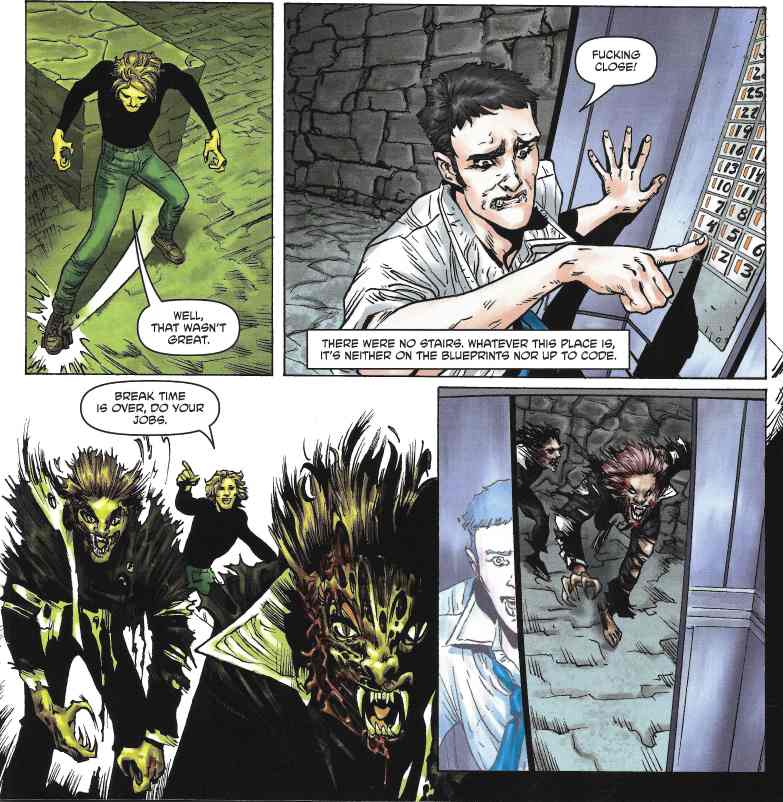 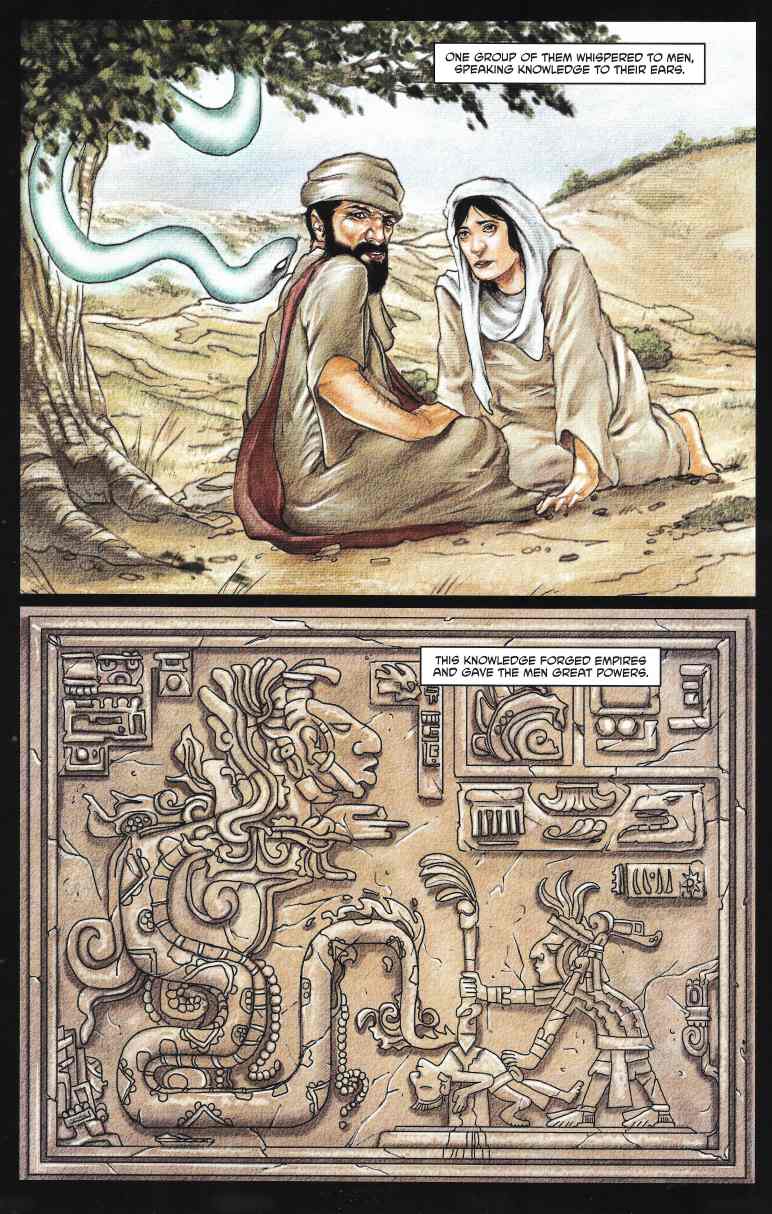 …the bad guys are called the Serpent… 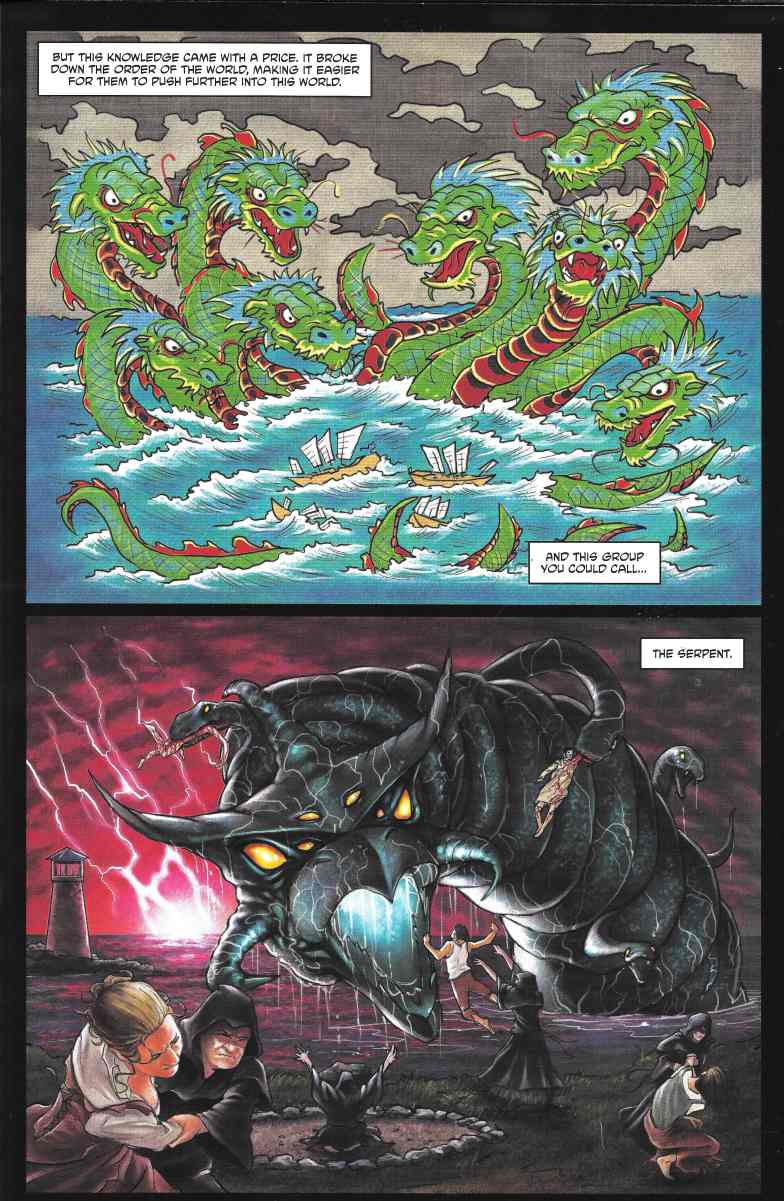 …but that there are “good guys” here too. Scientists and mathematicians who oppose the bad guys… 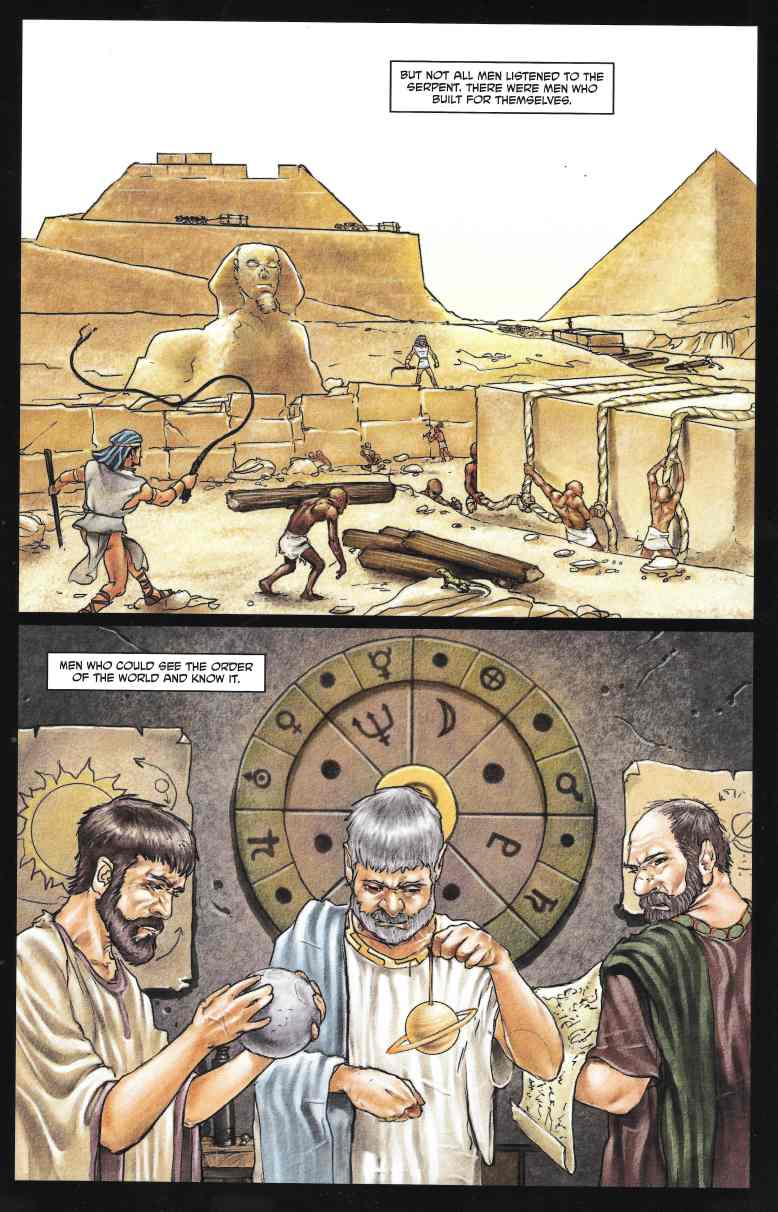 …and they are called the Storm. 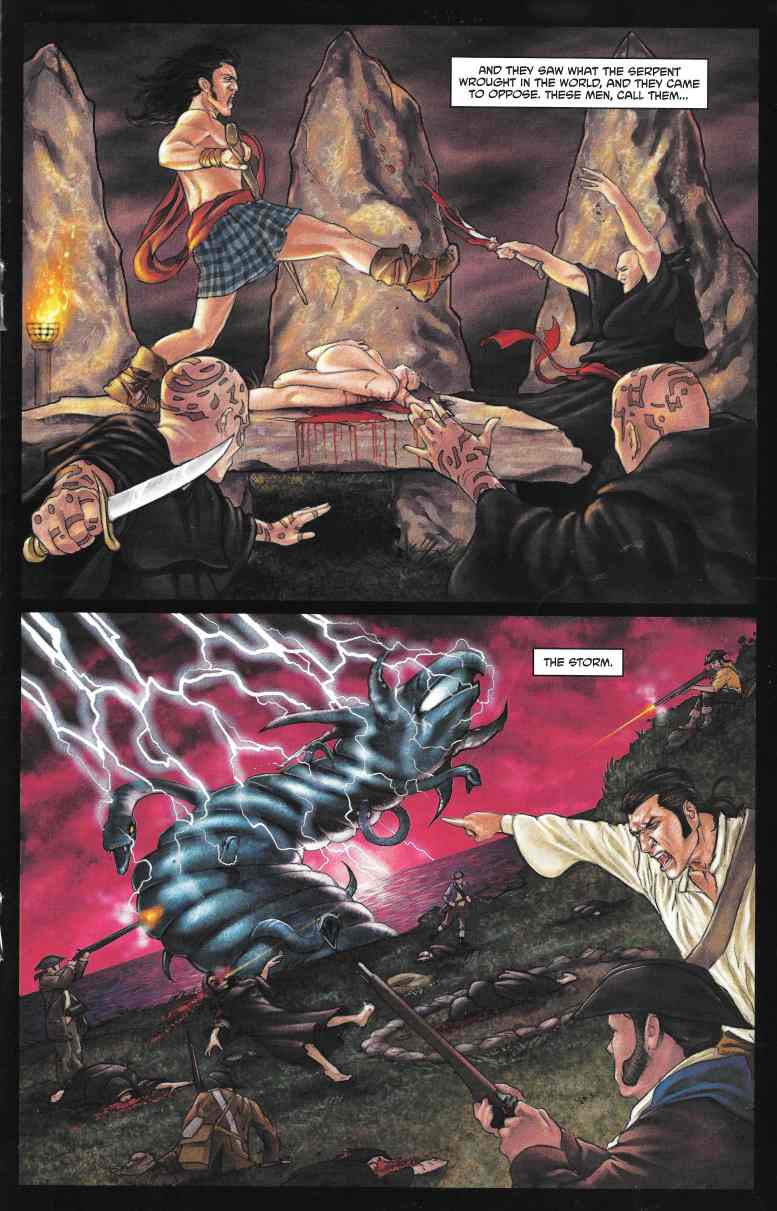 And I’m calling all of this an unnecessary interruption of an exciting chase scene that steals a bit of the mystery from the prior goings-on. Let the call that frees Josh stand without any backstory. But no. Our author feels he has to explain that for the darkness there is a light, which makes this horror story less thrilling.

Now we come back to the werewolf-demons tearing through the floor of the rising elevator Josh occupies and all the tension has drained away. It takes a page or so for us to step back into the groove of this story again. 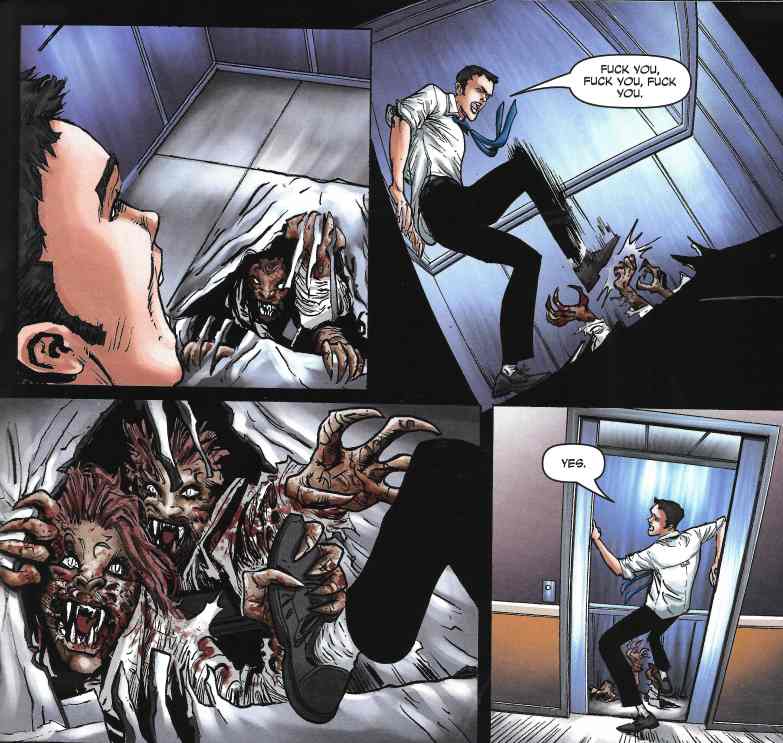 And turns it from horror to just an action piece. 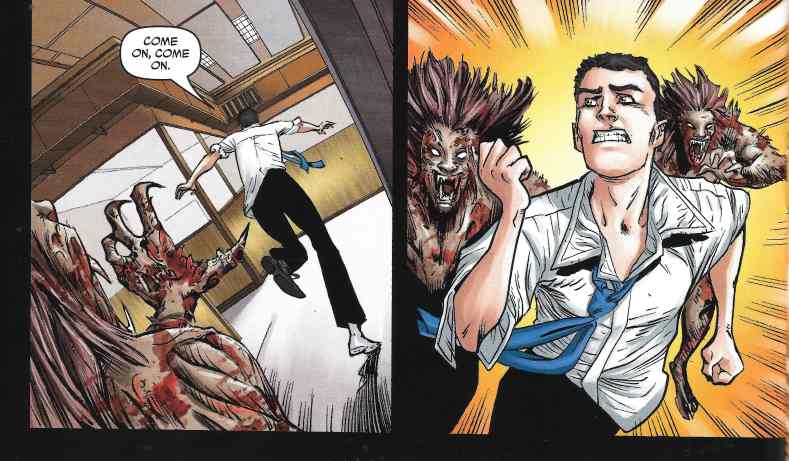 Not one that I find super interesting. Even with the arrival of… …flatly drawn woman with shotgun who is part of the Storm. 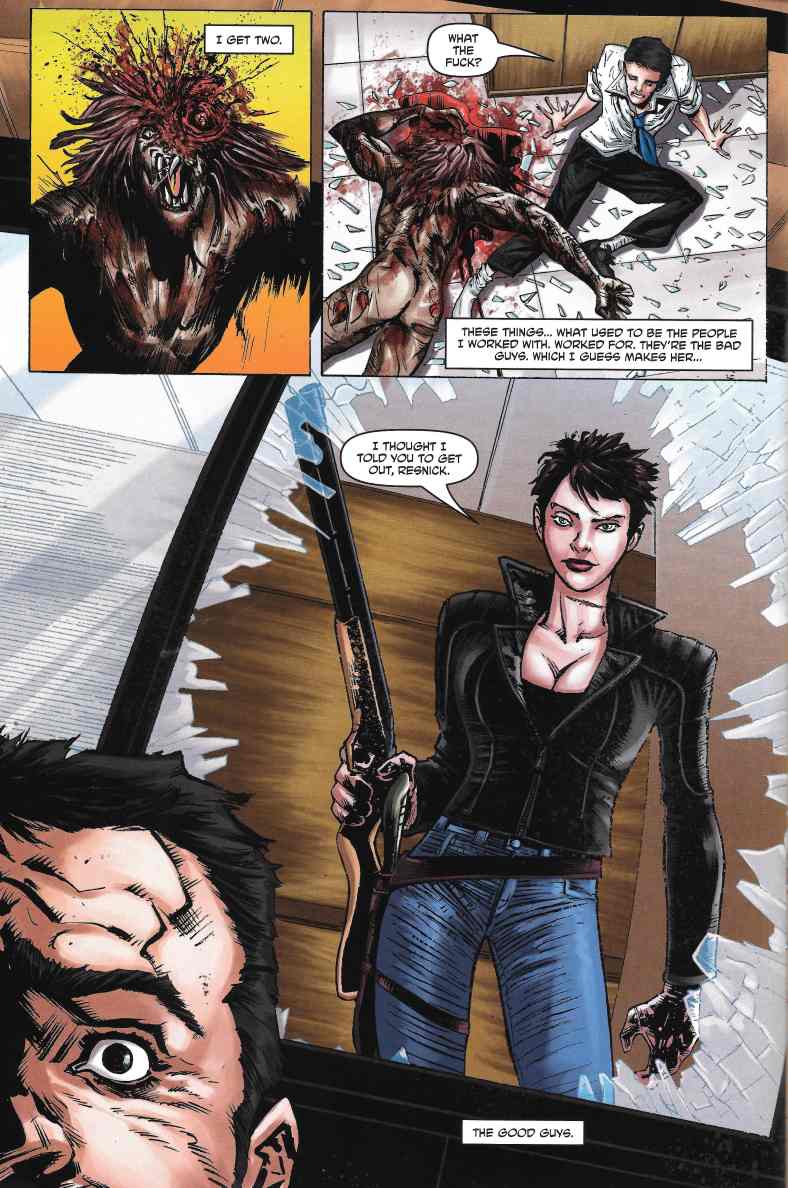 We end on a “this story will be demon-god Men in Black” kind of vibe. For me, that doesn’t really work as a horror setup. Sure our protagonist is still a non-powered innocent, naïve in the ways of demon fighting. How long until he is spouting spells and shooting spookies, though? Issue three? I don’t find the concept as thrilling.

For all my love of Lovecraft, Dark Gods goes down the wrong path for me.
Posted by SonOfCthulhu at 7:23 AM