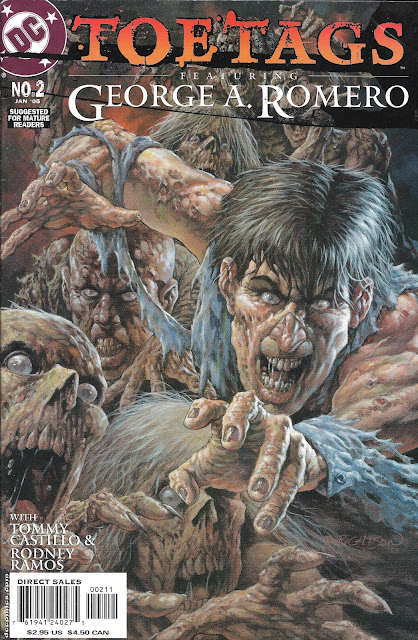 Toe Tags intrigued me more than most when it turned up in the Crapbox. Here was a six issue mini series about flesh-eating zombies written by THE guy. You know. George A. Romero! The person who put flesh eating zombies on the map with his amazing Night of the Living Dead (1968) penned this. And the book contained all the gore you would expect coming from that source, yet was released by DC, one of the big two, under their own imprint and not Vertigo. I came at the book with a bit of caution, trying hard to tamp down my excitement with some realist expectations that the book, much like Romero’s later zombie films, would probably let me down.

Don’t get me wrong, Romero’s first few movies in the series were excellent in all ways that a zombie movie can be. Social commentary, insane-bizarre cinematography, great action, characters and gore. His first few films get all of that stuff right. But somewhere around Land of the Dead, the diminishing returns started to become apparent. The Big Message became a bit too on the nose in some instances. The zombies stopped being as menacing for some reason. So I approached this with trepidation.

Toe Tags began as a script for a new Dead film that Romero wrote and then shelved. DC comics struck a deal with Romero to feature the unused story in their book “Toe Tags”, designed as a sort of multipart anthology where they would bring in creative luminaries from various media and allow them to write short six-issue storylines. Romero’s six-issue “The Death of Death” was to pull in enough readers to show the idea was viable, but it looks like the project was only a modest seller and the idea was scrapped after Romero’s story was complete.

And this is all to the good. The Death of Death, like Romero’s later Empire of the Dead comic book, is so derivative of his zombie universe that it would have felt weird adding it canonically to the Dead filmography. However, it works well enough as a stand-alone tale. There isn’t a ton of story here, but at least it doesn’t add elements to the Dead universe like talking/thinking zombies. (In “Empire of” Romero went so far as to add vampires to his zombie Dead series, and that also to me felt very desperately jumping the shark. We’ll get to Empire at some point in the Crapbox).

The GOOD is that this IS a Romero tale of zombies with some great art and gore by Tommy Castillo and Rodney Ramos that isn’t sitting on a shelf somewhere, but is out there for fans of Romero’s work. It doesn’t appear to be a bad zombie tale (hard to tell from 1/6th of the story), and it eventually gets around to some social commentary. There are some interesting characters, although not much is done with them by the end of the arc, if other reviewers of this are to be believed. 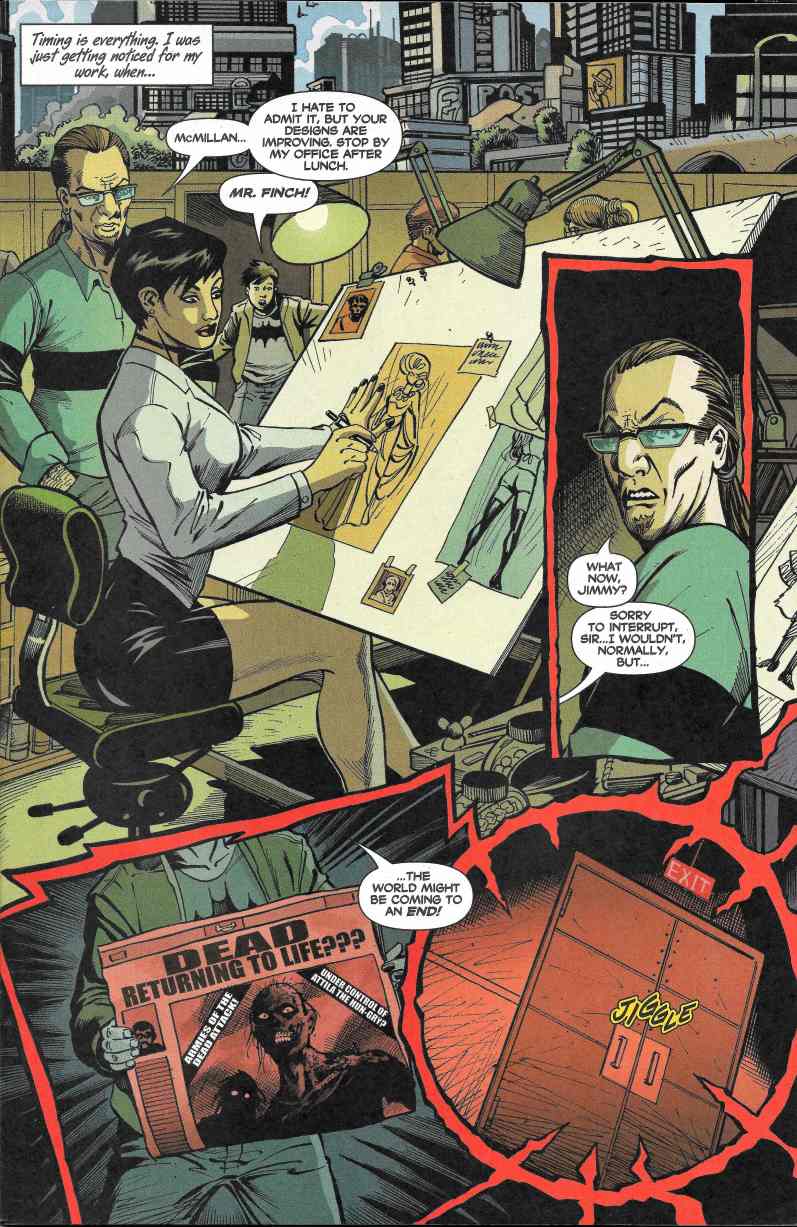 Even though this is issue 2, we start off with the moments before the zombie outbreak affects one of our two lead characters. Meet Judy McMillan who is working as a fashion designer, when suddenly the bottom falls out of the world with a crash at the door. 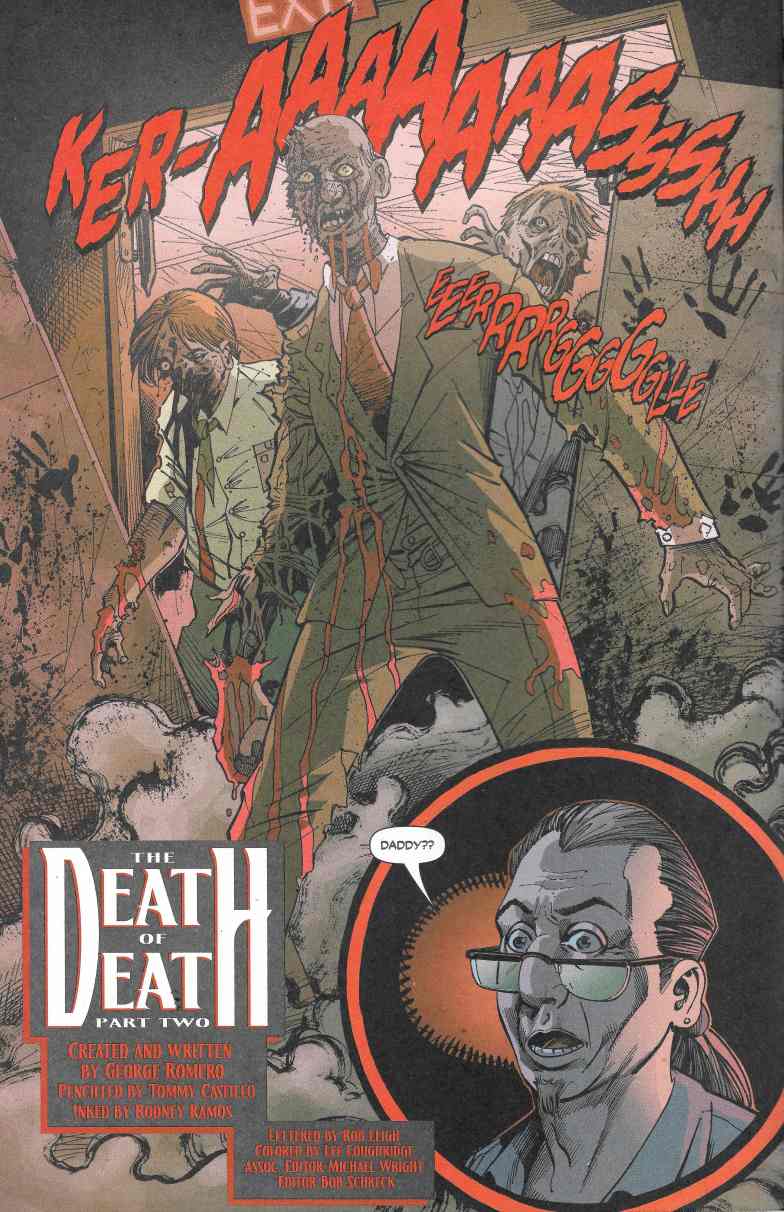 The dead have returned to life and LOOK AT ALL THAT GORE! Surprising for a DC book, but I’m glad to have it. It amps things up appropriately. I love that somehow this zombie of this guy’s dad has found it’s way to his son’s work (yah know, without driving a car or taking the subway or anything…kinda surprising, actually. That’s quite a feat.). 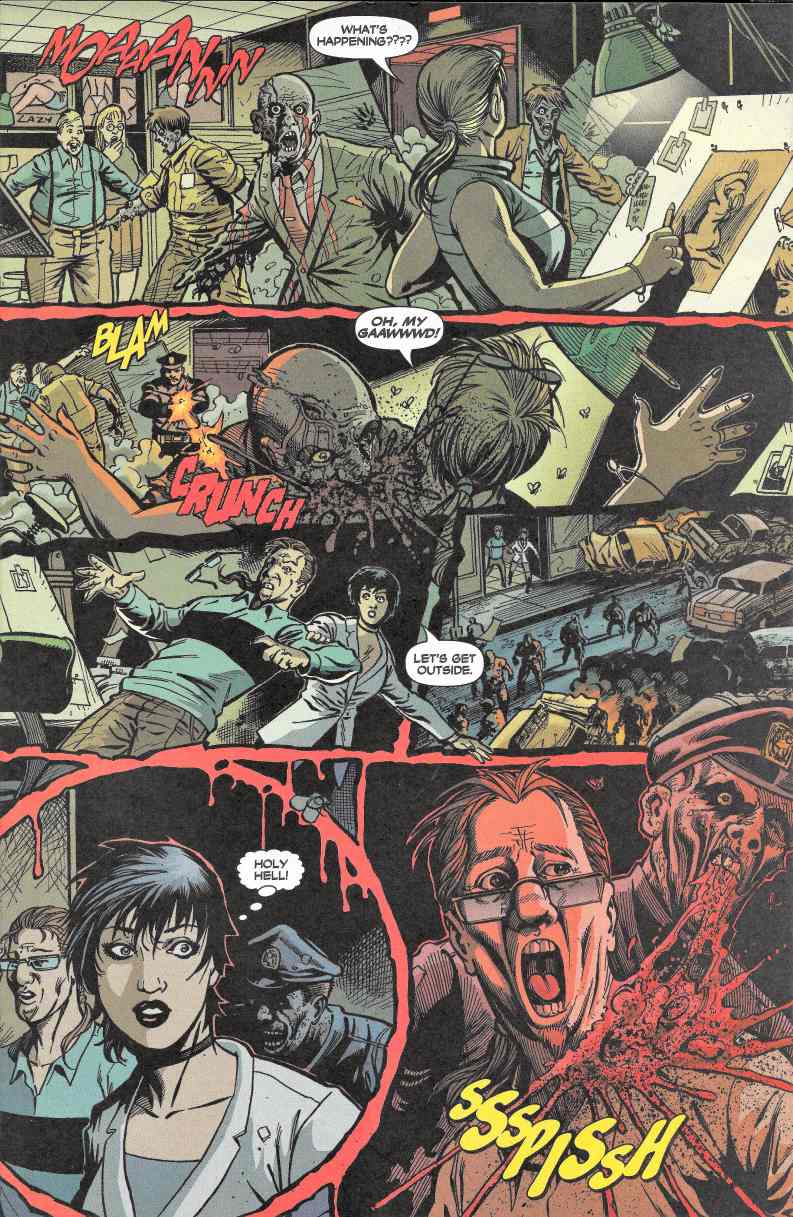 While everyone else in Judy’s office is getting slaughtered to death, Judy escapes… 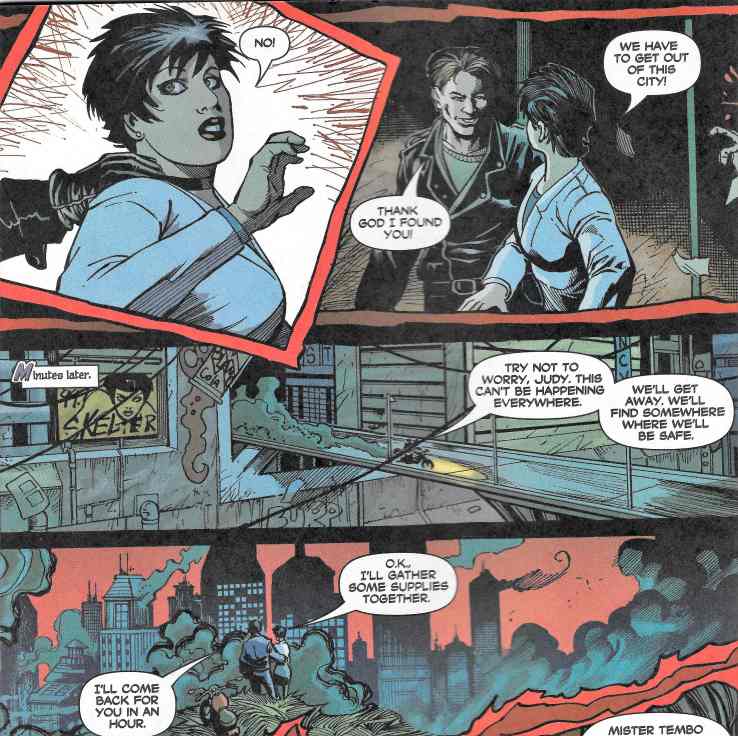 …with the help of this guy, Damien Cross. Damien gets Judy out of the building and then leaves to get supplies for them to take (on his motorcycle? Maybe he should get a nice SUV or RV or anything with doors, windows, and storage space for more than a couple of sandwiches.)

…and he never comes back. Until now, Judy’s been rescued by Damien again. Only this time, he’s a bit …changed. 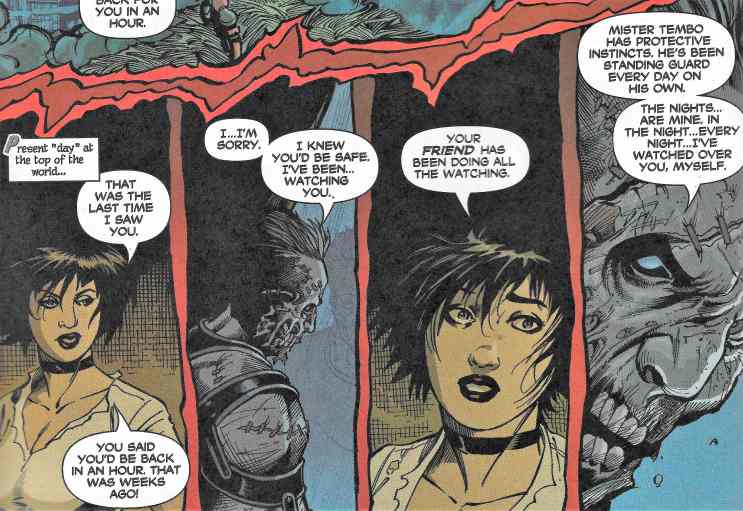 And by that I mean in more ways than just becoming a creeper. Damien is now a robo-zombie, his intellect held together by…, but wait, that’s getting ahead of the story. It appears he has been saving Judy’s life. Like that time a zombie had her cornered after the humans she was staying with ran off while actually saying “every man for himself”. Judy, shocked by the cheesiness of that line, becomes cornered by this fella. Make that former fella. 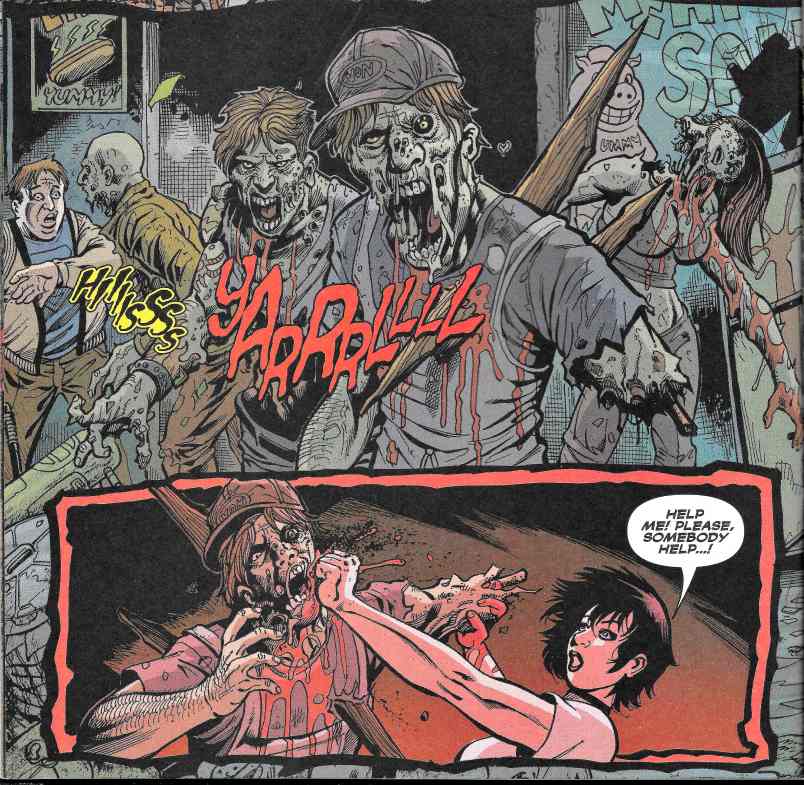 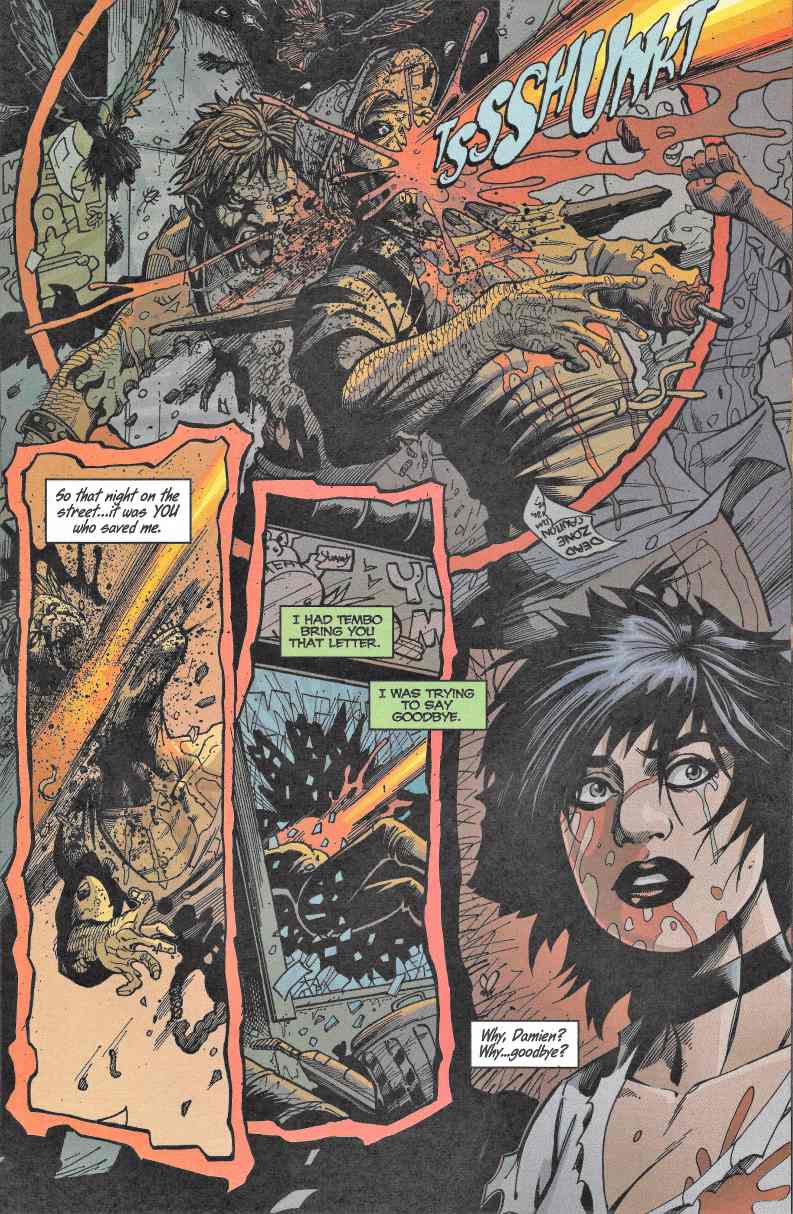 And NOW we go into Damien the robo-zombie’s origin, which involves him being found by a Doctor Hoffmann who kept him from completely turning into one of the mindless, slavering undead. The good doc also keeps Damien in the dark about his new non-living state. 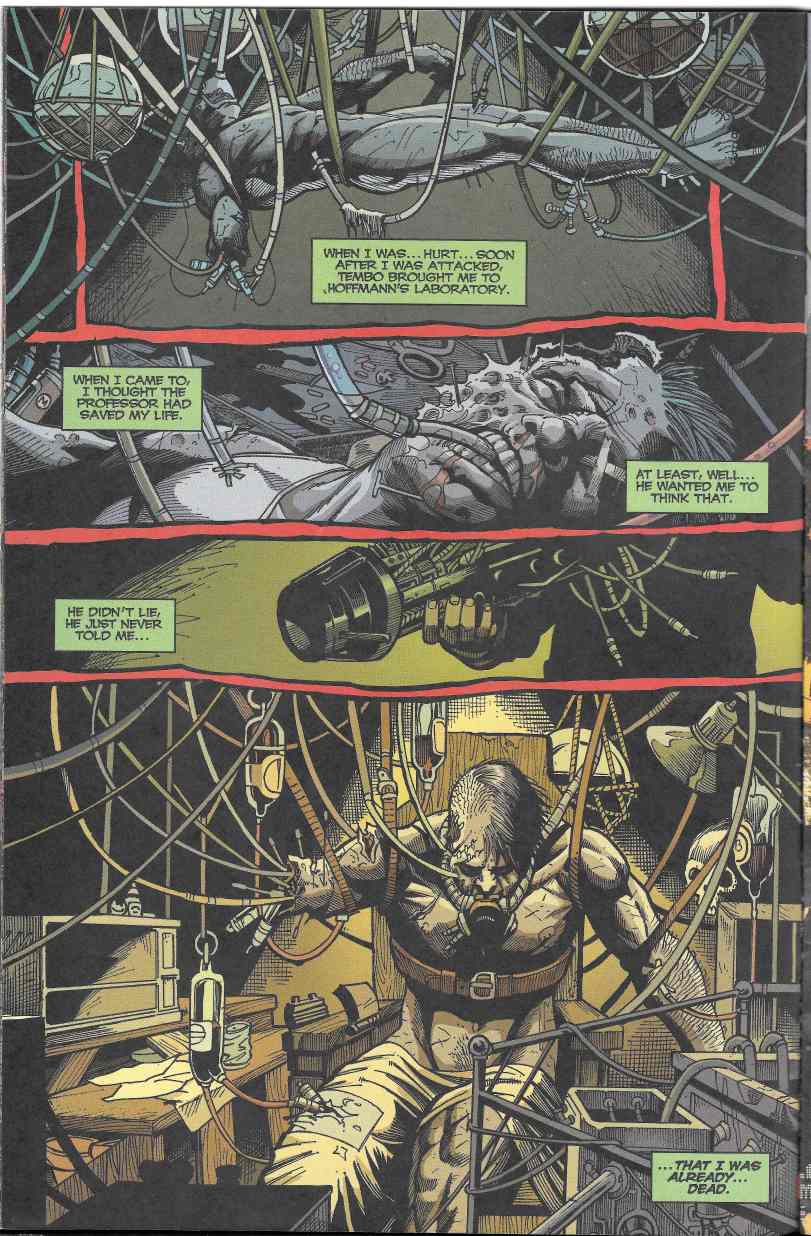 With that origin started we turn to one the most fantastical elements of this entire story: that of our main villain. Now most of Romero’s zombie flicks have one of two types of main bad guys. The first is just a mindless horde of zombies. They don’t have much personality but they can be used to jam people together that wouldn’t likely end up together and we can derive the story from their struggle to stay alive. The second is some singular human antagonist who, through either greed or the quest for power, seeks to use the zombie apocalypse to further their own agenda. In Romero’s movies these have been allegories for both capitalists and the military.

In THIS story, however, George decided we needed more than just one zombie who could talk because of an experiment. Instead he created certain zombies that were still intelligent. And they are lead by this guy, who is accepting a rare interview opportunity from this reporter from Amalgamated Press. 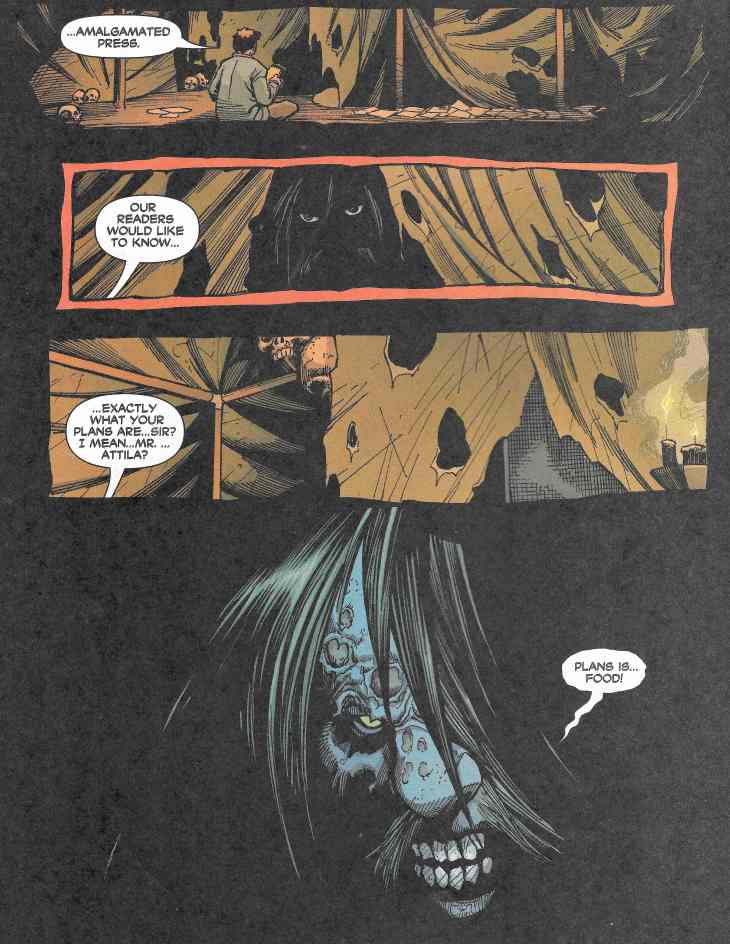 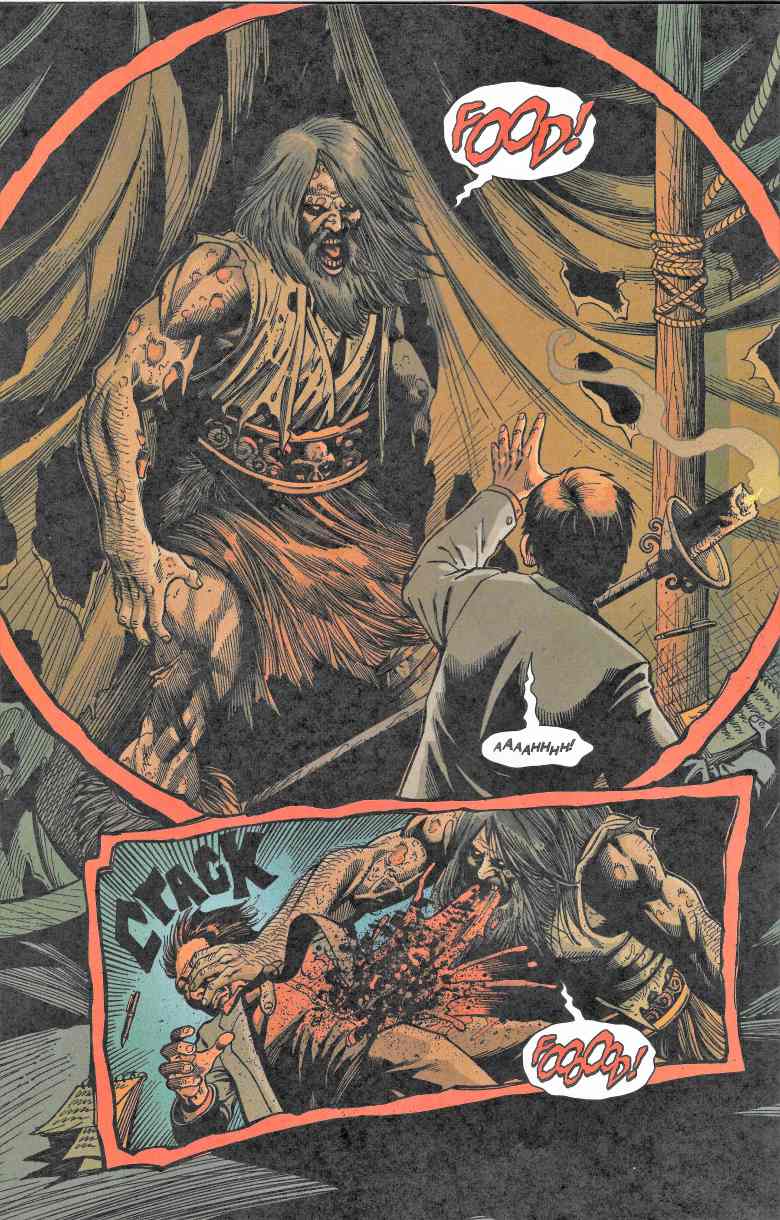 And even though it speaks, that does not make it any less of a walking undead menace that will kill you and eat your flesh. So next time, Mr. Reporter, try to NOT get eaten by your interviewee.

And while you are thinking that just because they talk, that doesn’t make these zombies any different if they are still mindlessly driven by a desire to eat people, wait until you see who is the “power behind the throne.” Because it quickly becomes evident as a new person enters the tent that Attila may be the face of the zombie invasion, but this guy is the real leader. 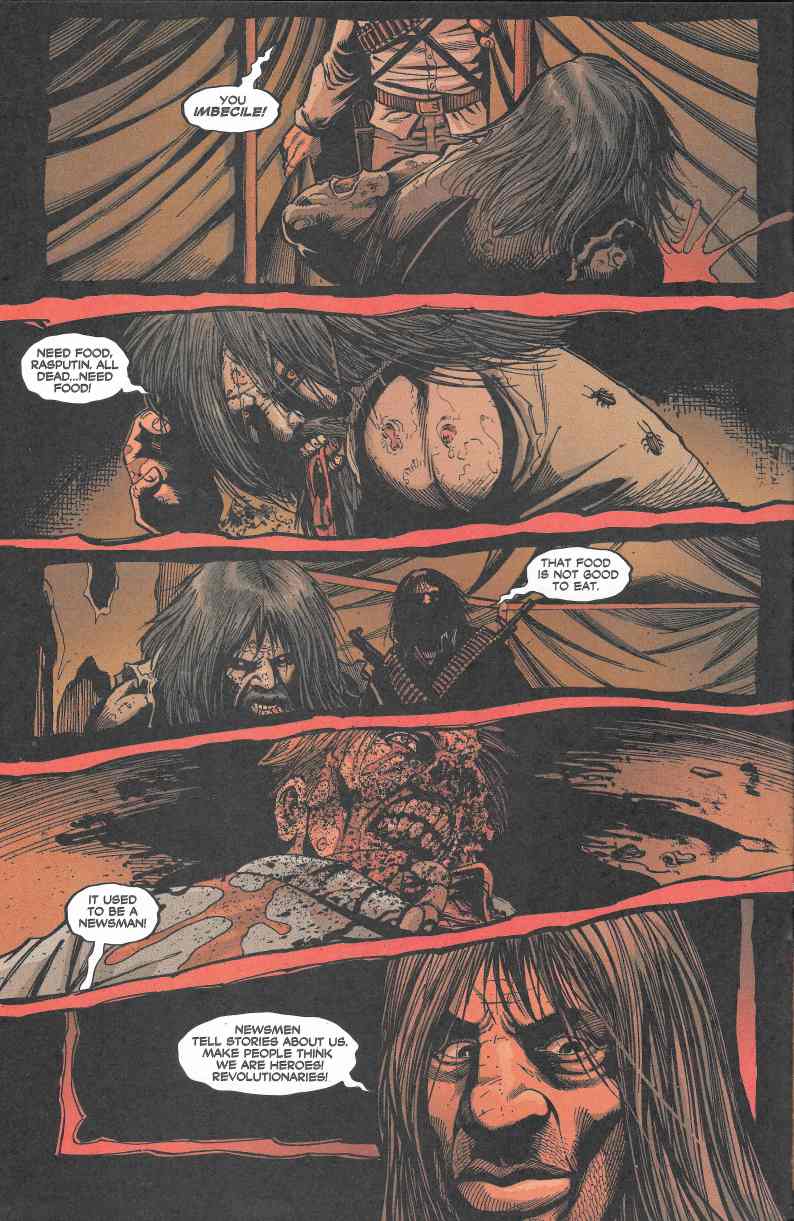 And since we are going down the historical bad guy route, I assume that is Rasputin the Mad Monk. And while I hate just throwing whole pages at you, this stuff is too wacky to miss. Rasputin is mad at Attila for eating the reported, because he doesn’t want the bad publicity. 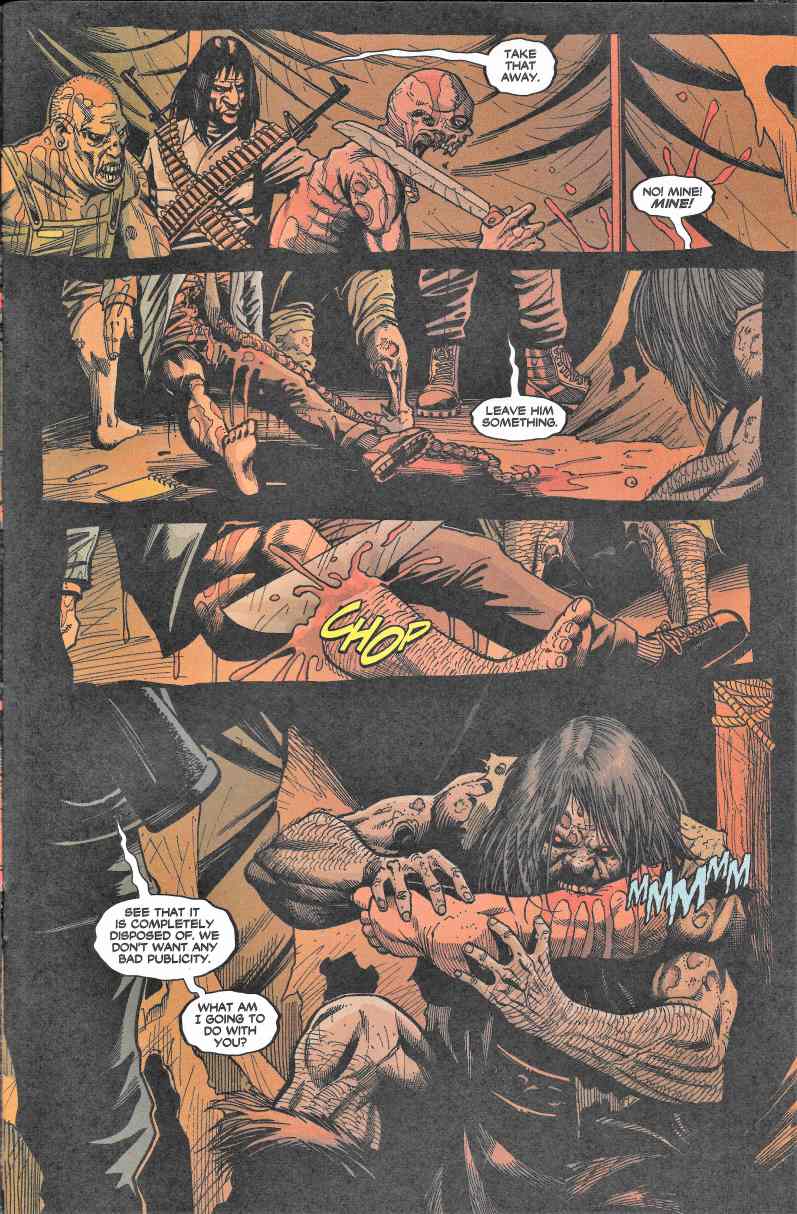 No, none of that makes sense. YOU are EATING everyone in sight anyway. No one will be fooled if you don’t eat one reporter. “Well, you see we didn’t mean to eat everyone. It’s just because being undead makes you do crazy things sometimes.”

So Rasputin has the other zombies take the reporter’s body away (which is a ??? from me. The idea is to not let it get found. Best what for that to happen is to let Attila continue eating on it.) so no one is the wiser about what happened to him. They leave Attila a leg though at Rasputin’s insistence.

NONE of this seems to fit in with ANY of Romero’s zombie movies, is my point. This flies off at such a tangent from the world Romero built that I don’t see how any of this could have ever been a script for a Dead movie. It’s like Romero got mixed up and thought he wrote the Revenge of the Living Dead series, which DO have talking, thinking zombies in them.

Anyway, back to our robo-zombie good-guy that the book is somehow trying to trick me into thinking will turn into a love interest for Judy…Please tell me that’s not happening book? Please? The guy is dead. He’s gotta smell like a refrigerator full of meat that’s been left turned off for a couple of months. 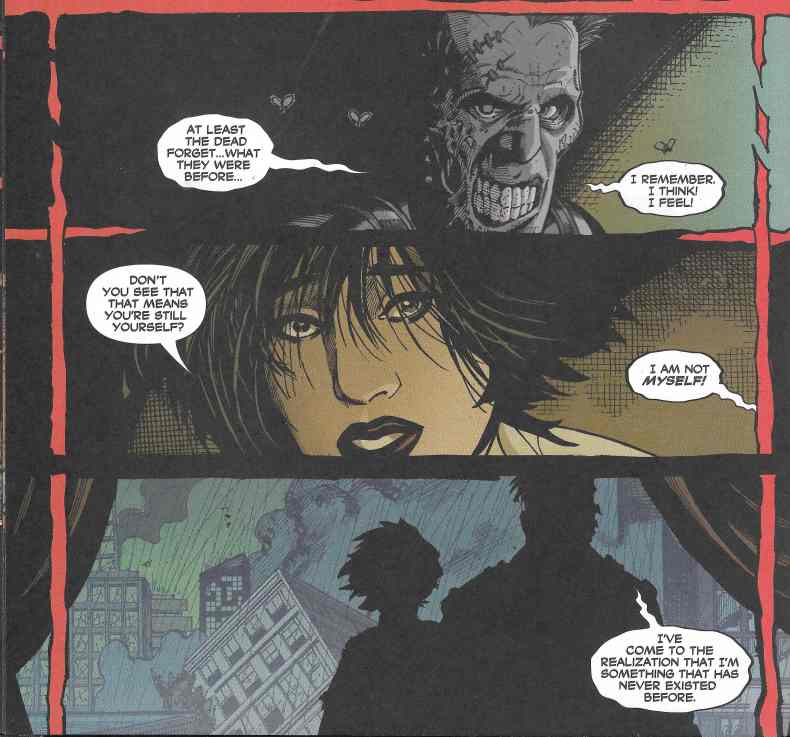 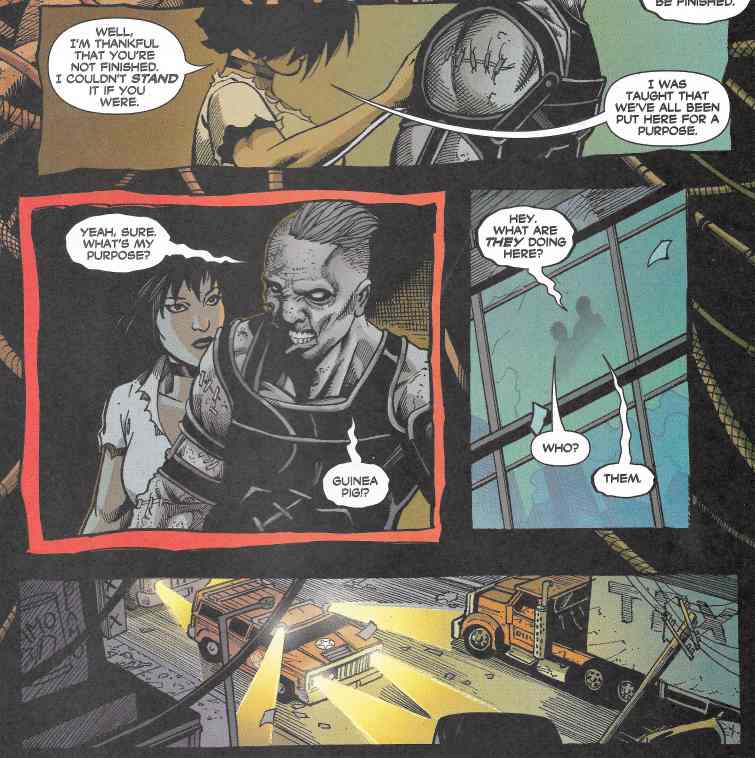 …followed quickly by Judy being thankful that Damien isn’t gone for good. This tender moment it interrupted by a military vehicle pulling up outside.

Appears someone has taken a more than healthy interest in Doctor Hoffman. 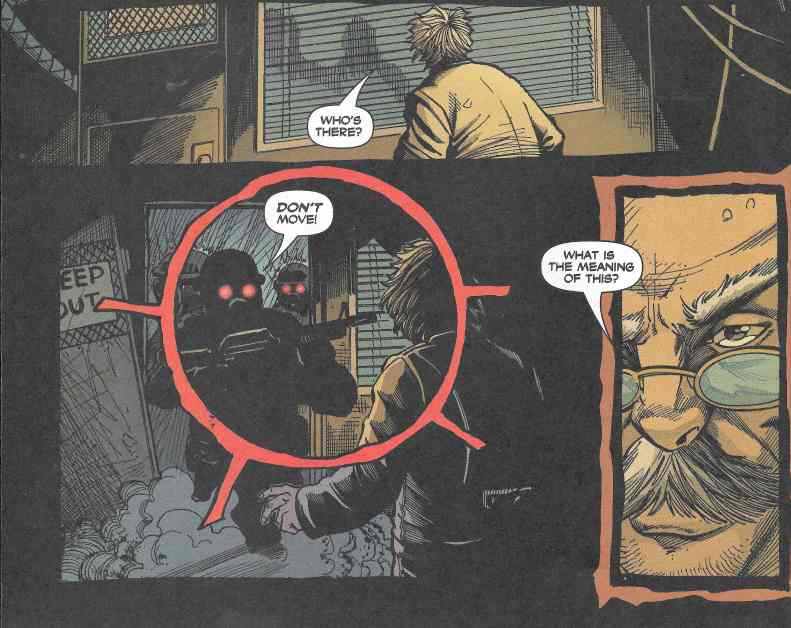 And with that, the doctor is spirited away with these guys in high-tech camo gear. Judy and Damien quickly pursue them on the back? …of an undead…elephant...Seriously, George? 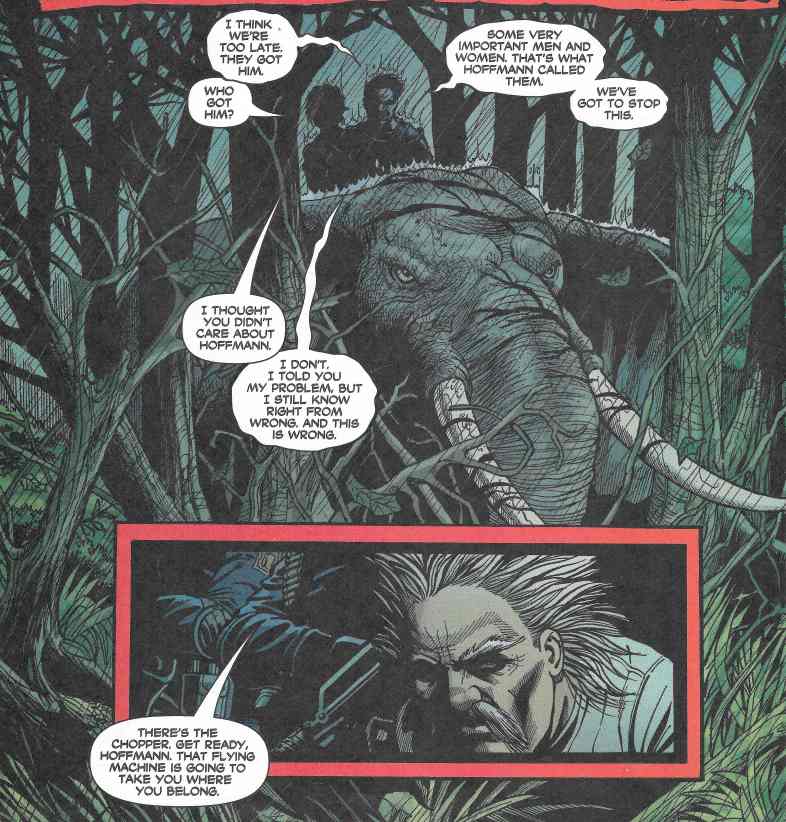 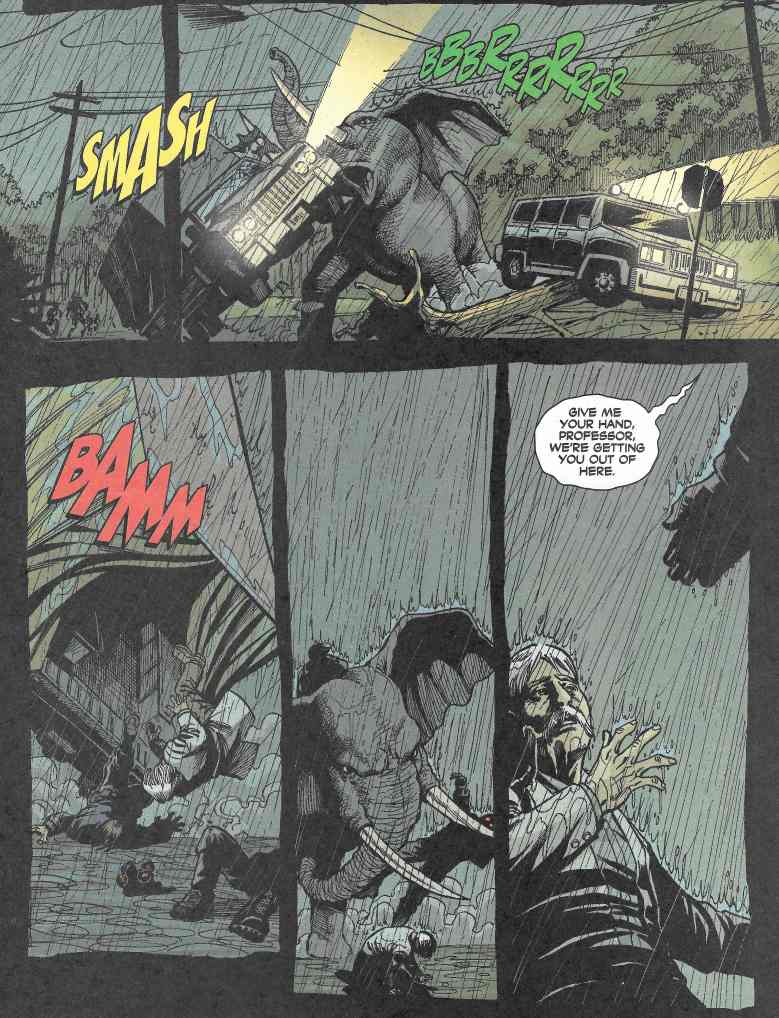 …and make off with him before the soldiers can mount a proper counterattack. Possibly because they are a bit freaked out by a zombie and a woman riding an undead elephant to the rescue. It’s okay, guys. My mind is reeling with the thought of it too. 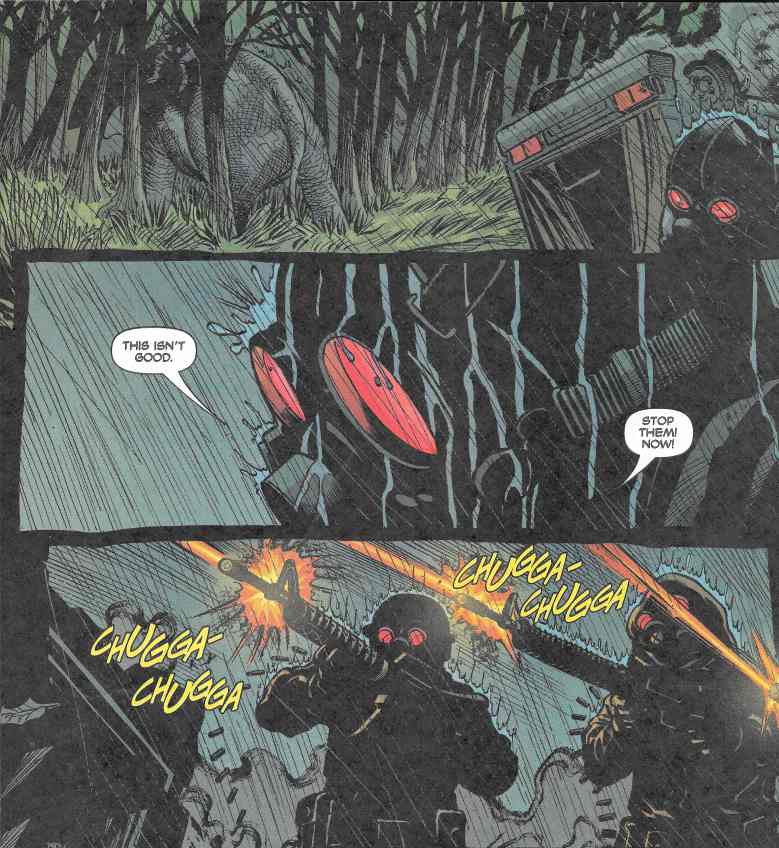 And then we meet the big-bad military type who represents the evils of autocratic authority figures in uniform. He chews cigars and says things like “Find him. I want him”, even though none of us are certain what he would do with the doc if he even had him. Appears he was a corporate CEO at “Entron” prior to being in the military, which makes him a bad/failed capitalist as well. At least I think that’s what it means. 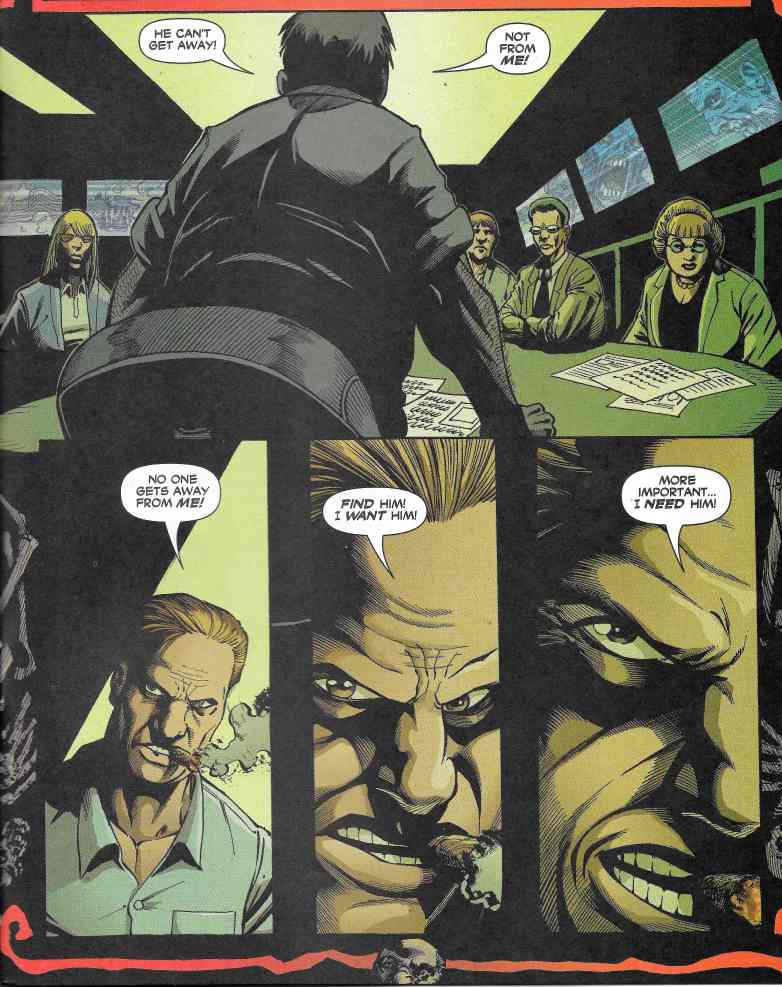 What we are certain of is that being in his employ does not come with a healthy retirement package. 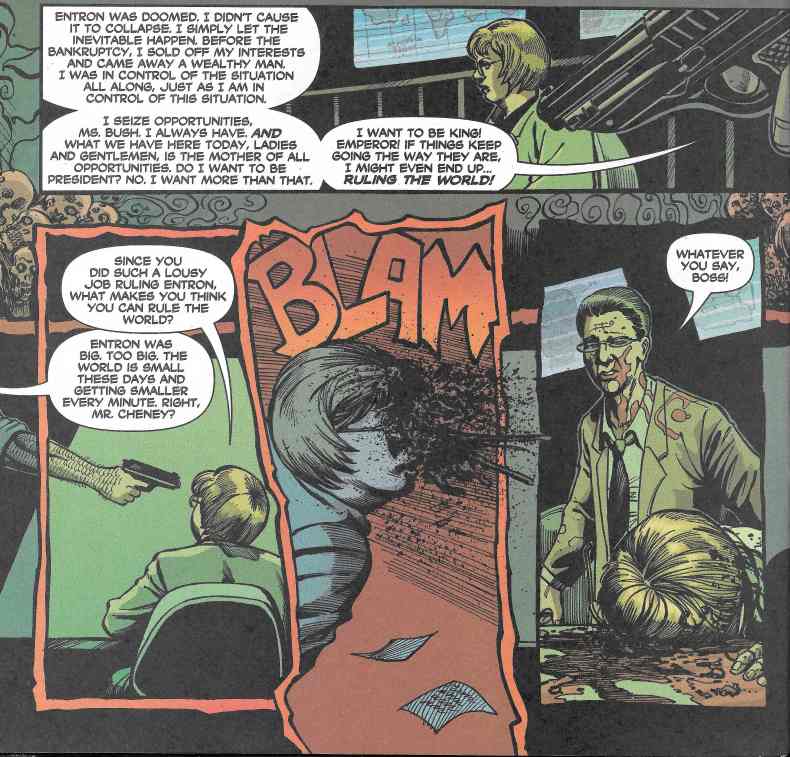 But I’m jumping ahead a bit, because before he starts executing his hench-people, we find our three “heroes” absconding off to an abandoned silver mine to hide out. Leaving the elephant outside will possibly be a dead giveaway, guys.

And we learn the WHY the bad guys want the professor-doctor guy so much. He’s perfected a very special serum…well, I’ll let him tell it. 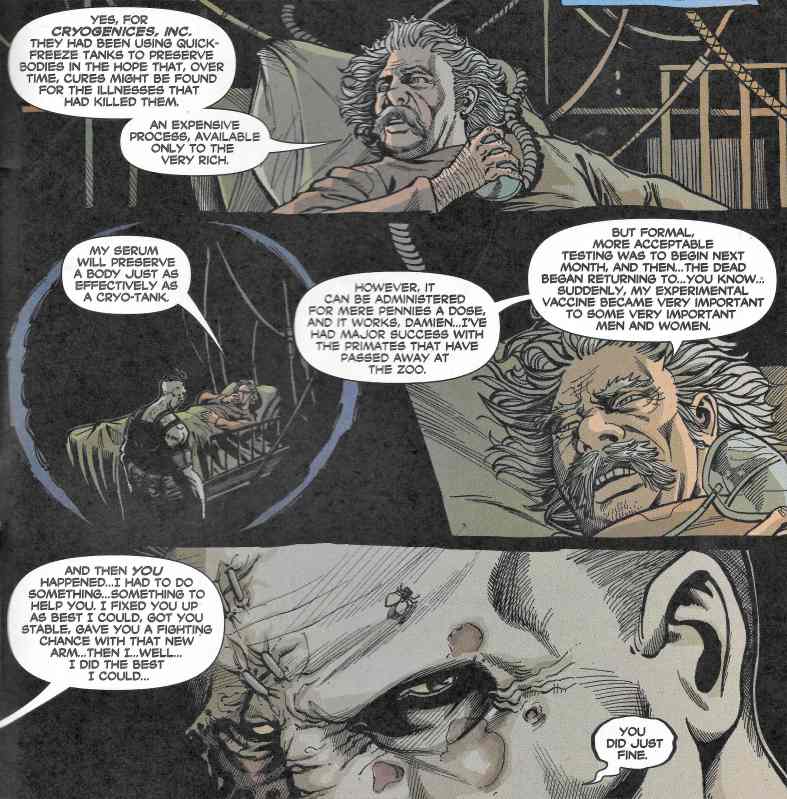 We’ll turn from this tender scene to the scene of the lunatic making tenderizer out of his female follower to the last page which is Attila the Hungry sending his troops down on the some shacked up human tender-vittles. 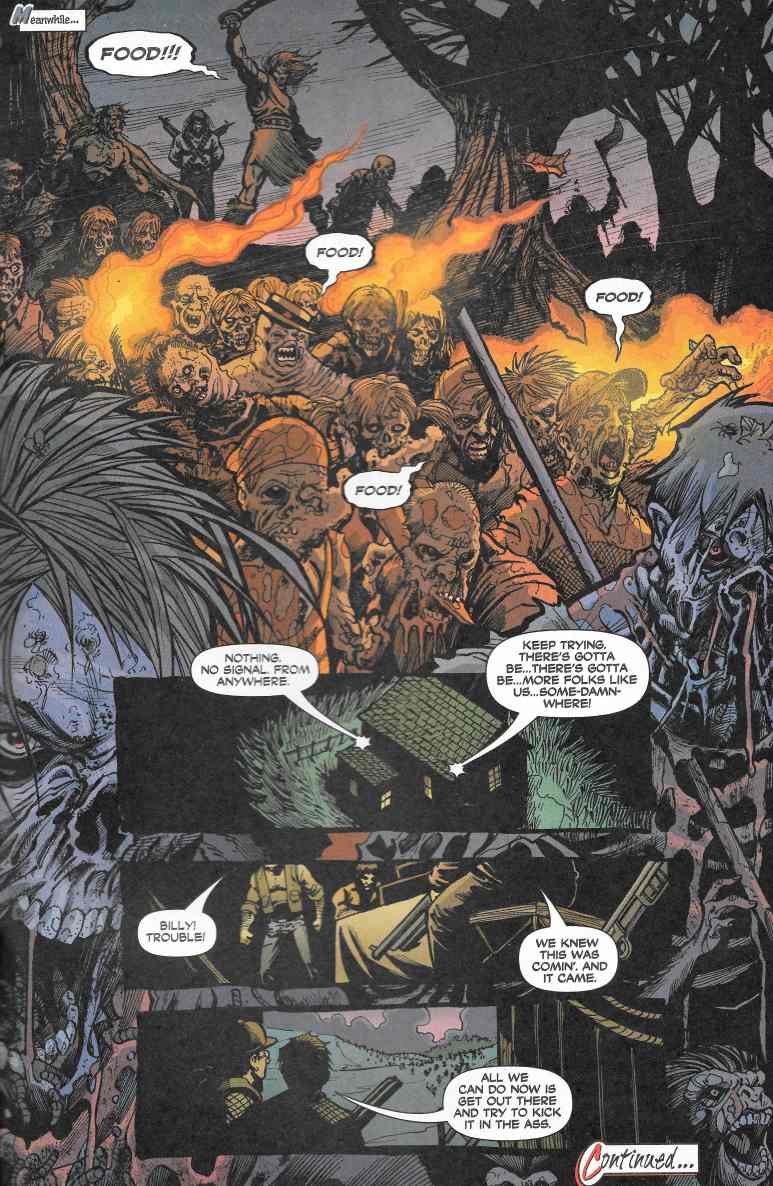 And that’s where we end.

Toe Tags certainly was a let down to me. The high of watching George Romero take another stab at zombie horror kind of gets smooshed once you realize he’s done two of the best takes on that story and possibly has no interest in repeating himself. That perhaps the straight zombie tale is played out unless the make them talk or think or run fast or have them working with vampires…

I don’t believe any of that last bit to be true. There can be other interesting zombie stories, they just aren’t happening here. Better luck next time, I suppose.
Posted by SonOfCthulhu at 6:15 AM