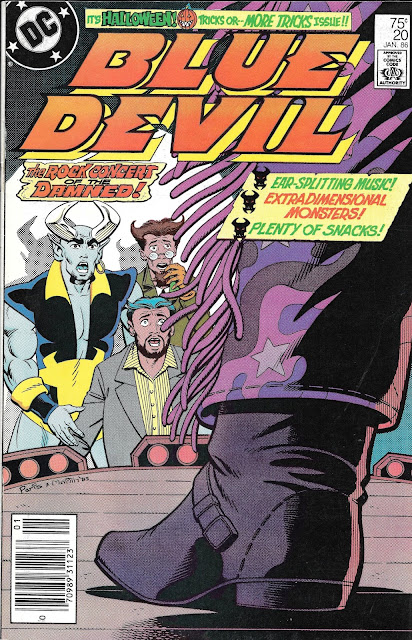 A Halloween issue where things quickly to straight to…

Blue Devil was never a hero I would put on a pull list no matter how good his books looked. This solo series appeared to not take itself seriously and my 1980’s buying habits had not matured to the point of allowing a book to be wryly subversive in the superhero genre. The book that was to turn that around was Justice League, of course.

So the uniquely comical series begun by Dan Mishkin and Gary Cohn with the excellent work of Paris Cullins slipped under my radar. At least until they started showing up in Crapbox bundles like I had mined some kind of Blue Devil strata. By then I had devoured the darker, more serious Blue Devil that appeared in Day of Vengeance and Shadowpact, both excellent series and well worth a look. But the classic series I hadn’t touched.

And surprisingly enough, I enjoyed each and every issue. The premise is that while working on a movie as a stuntman, Daniel Patrick Cassidy thrusts himself into a stunt that involves wearing a custom exoskeleton that makes him look like a blue demon. Unfortunately one of the props on the set summons an ACTUAL demon called Nebiros who thinks Cassidy is one of his minions, and starts firing mystical bolts to force him back to Hell with him.

The bolts unexpectedly fuse the Blue Devil costume to Cassidy’s body, permanently bonding it to his skin. This unnatural bonding gives Cassidy improved strength and durability while also turning him into a “weirdness magnet,” a plot device that would allow Mishkin and Cohn free reign in throwing in everything and the kitchen sink in Cassidy’s adventures.
It’s a neat enough story concept and I love it even more after hearing how the pair of writers/creators came up with it.

“Our editor for a number of things we were doing was a guy named Dave Manak. At this point, Dan [Mishkin] was living in Michigan and I was in New York. I was the point guy who went to the DC office once a week and schmoozed the editors. One day Manak says, "Ditko’s been hanging around the office and he really wants something to do. Do you think you and Dan can come up for something for him?" I went home and I called Dan and told him about this, and we were both very excited. Ditko was the guy who created Spider-Man and Dr. Strange, and we were gaga for Ditko! ... We decided to do something that takes something from every Marvel character we ever loved. Let’s take Iron Man, the guy in the costume; the Thing, the tragedy of the guy stuck in a shape he didn’t want; and a light-hearted, bouncy approach and a character who was going to move like Spider-Man. ... And we wanted something like the Green Goblin. How about Blue Devil? We called him that because Dan’s wife is from North Carolina and he was a Blue Devils fan. Then we started creating Blue Devil and thinking, "Ditko is going to love this!" We created this great proposal, and it was everything that we knew was going to set Ditko’s light on high beam. We took it in to Manak and he gave it to Ditko. Ditko looked at it and said, "I’ll do it if I have to, but this is really not my kind of stuff at all."

Better luck next time, I suppose. This did allow Paris Cullins to step into the drawing duties, giving the first six issues a quirkiness that is unmatched by any that follow. This issue is still good, however, being bit of a monster mash on Halloween all done with plenty of thrills, chills, and comedy stirred up in a cauldron of great art by Alan Kupperberg. Let’s move on in to the book as Blue Devil looks for new lodgings… 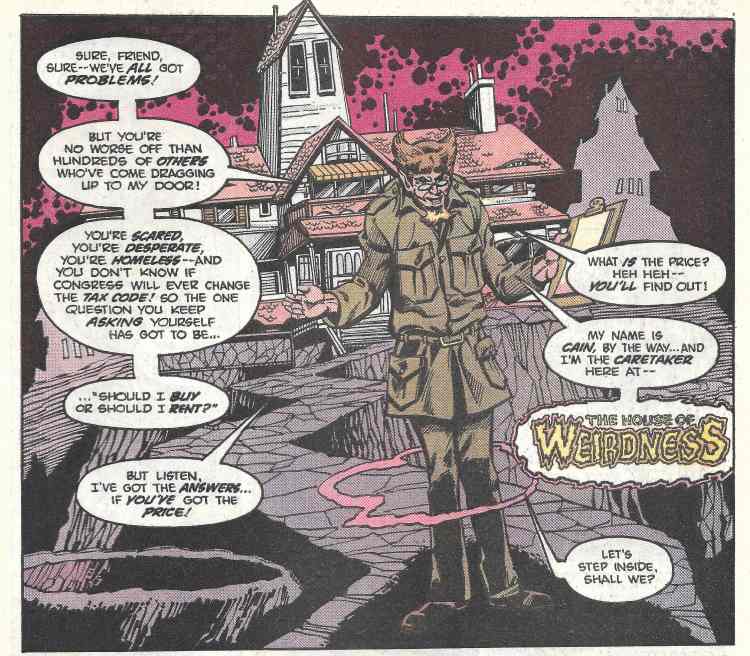 We begin with Cain, of House of…which one was it now? I forget. Ah, yes…House of MYSTERY. Looks as if Cain’s fallen on hard times, because now he’s the caretaker at the House of WEIRDNESS. His job currently involves acting as property leasing manager too.

And this is his client base… 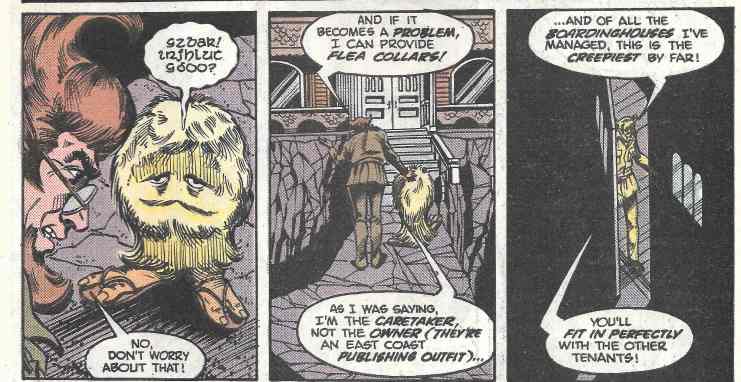 Cain bemoans his sorry state of affairs in his thought balloons, hating being reduced to “sucking up to a walking dust mop” but it appears he’s out of a job a the Mystery House. He bumps into Able who he chases off because he worries the elder brother will steal his commission. With that, he whisks his hairy prospect to the room for rent… 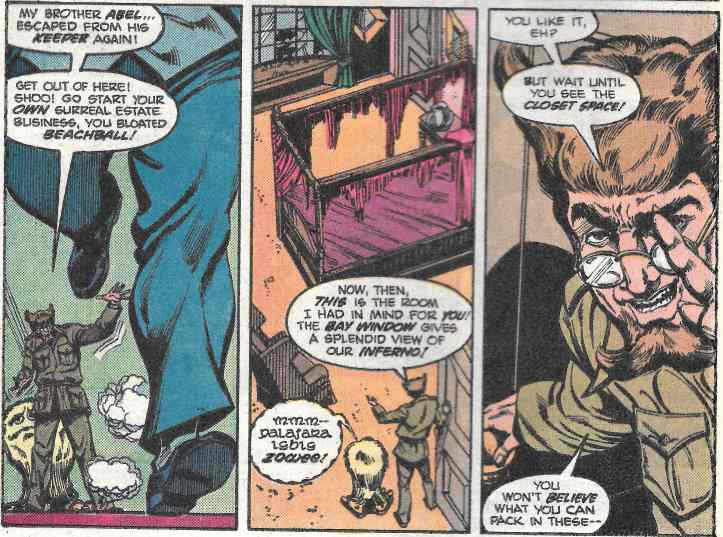 And shows him the ample closet space which ends up… 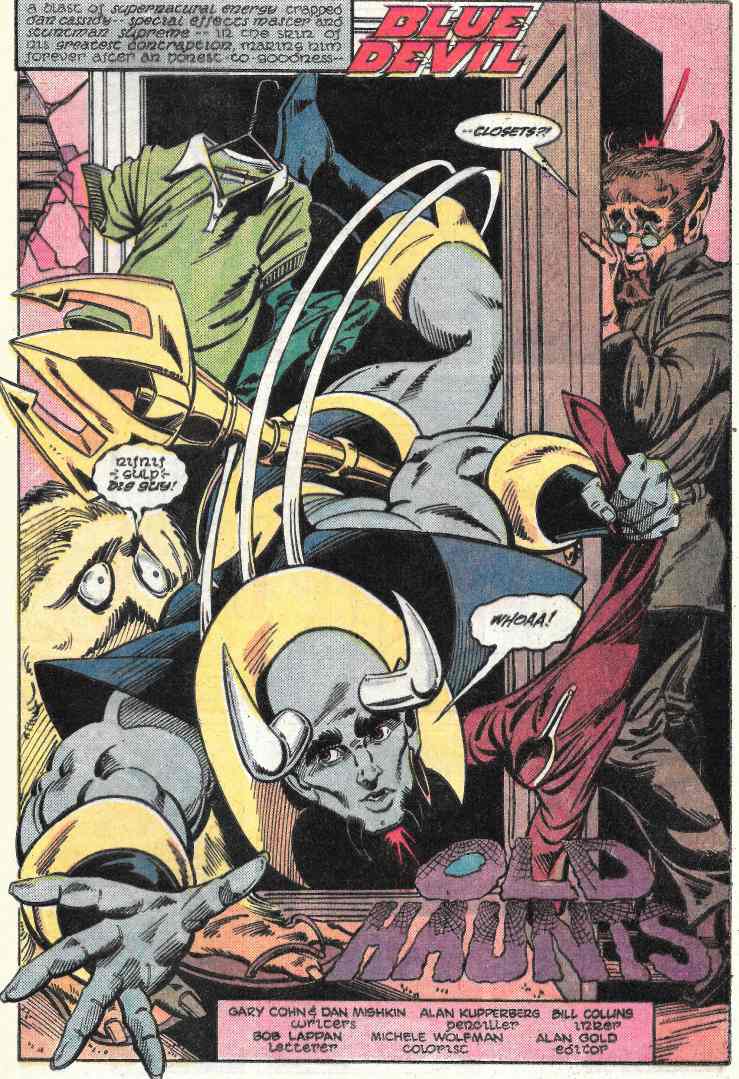 …being a portal to a closet in our dimension. One the Blue Devil happens to be inspecting, which allows him to burst through to this particular hellish reality… 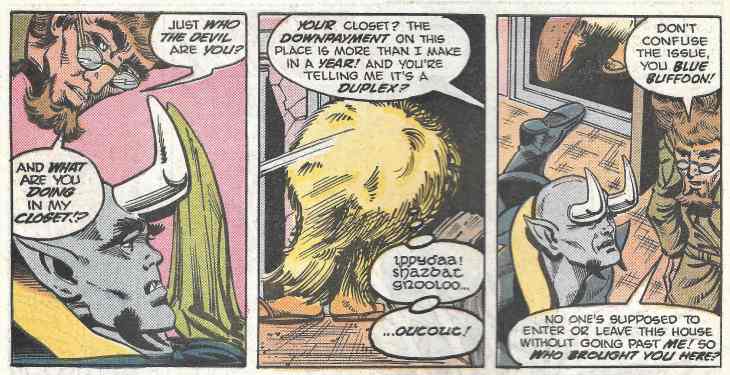 …even as it allows Cain’s customer to mischievously slip back to the prime material plane. Or for you non-D&D peeps: Earth. All this unnoticed by Cain and Cassidy as they argue over how he got there. So, off the little critter goes to the other side of the closet doorway.

Which is where Daniel Cassidy’s girlfriend is looking at new digs for her and Cassidy. His salary from the Blue Devil movie must have been quite extreme for this much of an upgrade. I mean who can afford a house with a closet that spits out furry cousin IT’s every now and again? 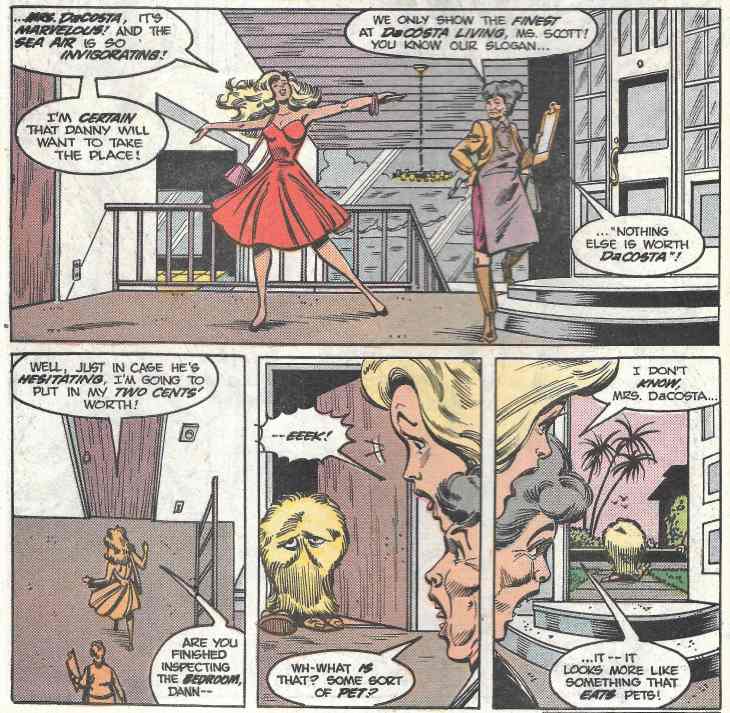 Meanwhile, across town, the OTHER big part of this conflagration to come is checking out the latest venue for his upcoming concert. Meet the possessed body of Jack McCollough and his low IQ hippie bandmates. These guys burned out so many brain cells in the 60’s that they can’t tell their newly risen from the grave lead singer kinda has some hellish thoughts in mind for his comeback concert. 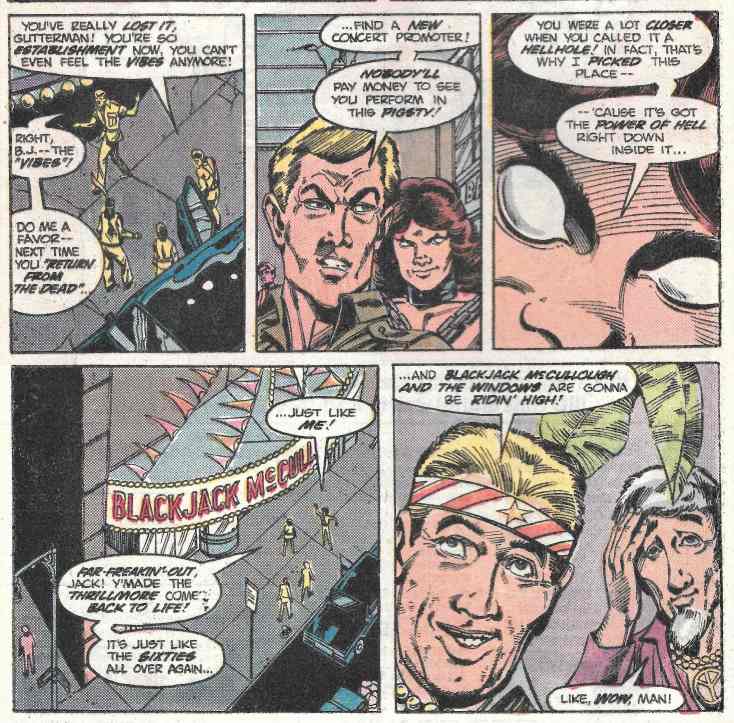 Two more ingredients are needed before we begin stirring this story stew. Mainly that Cain relays that they have to find the little lost hairball fast, specifically because it is All Hallows Eve! Seems the “Hairy Devourer” converts into something terrifying if the stars are right or some such. 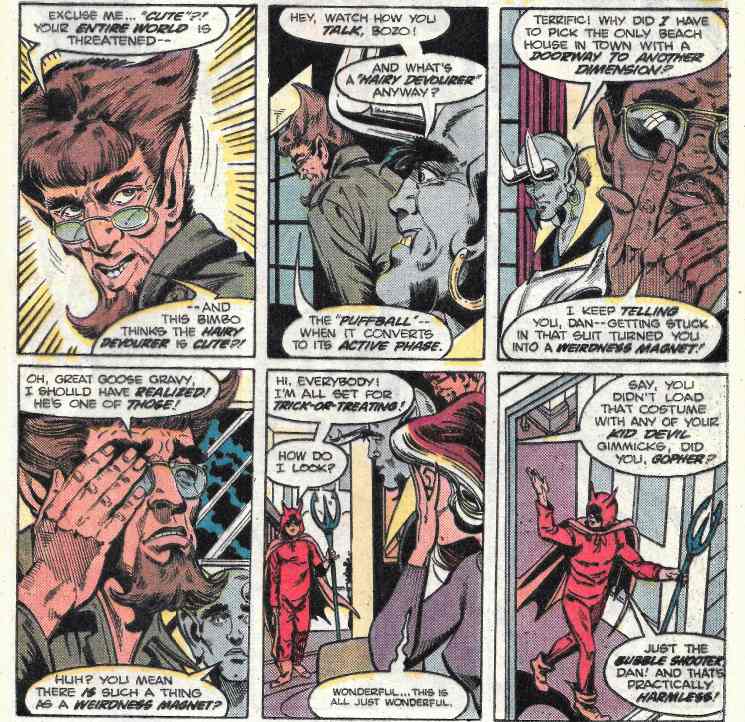 Meanwhile ingredient number two is young Eddie Bloomberg, Cassidy’s former on set gofer. Bloomberg is an unrepentant fanboy of Blue Devil, so much so that he dresses up in a cheap Halloween devil costume and joins in adventures, much to Cassidy’s chagrin, as “Kid Devil”. This doesn’t end well for Bloomberg in later years. But for now, he’s just the comical young sidekick who happens to be going trick-or-treating.

Now we start stirring the pot, first by showing that the Devourer is out trick-or-treating with neighborhood kids, a fact that escapes everyone even though it comes to their very door and Marla gives it candy. 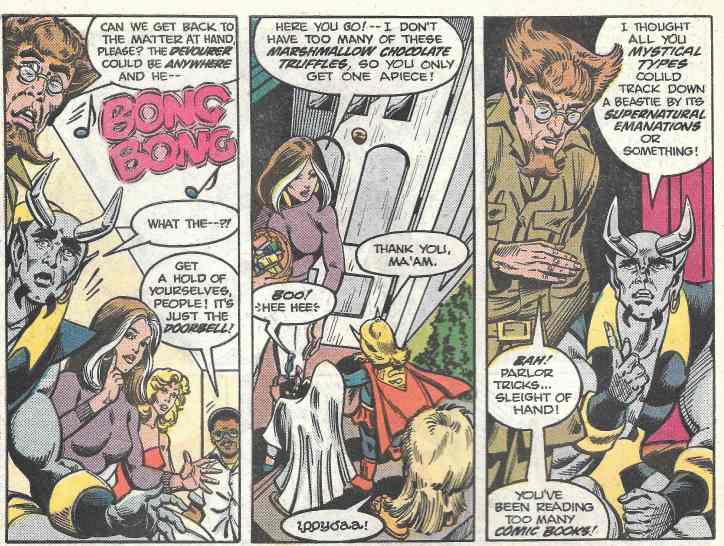 And next spin of the spoon we let it drop that the entire gang is scheduled to show up at Blackjack and the Windows concert later on that evening... 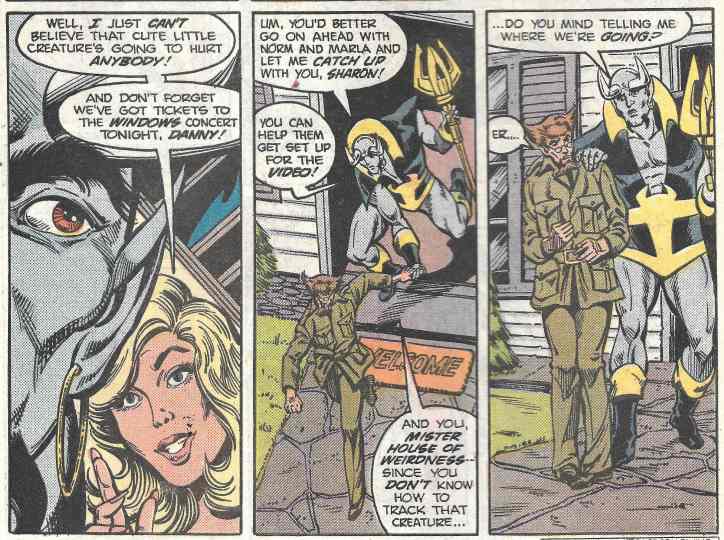 …and finally, with a stir we show Eddie bumping into the kids that are walking around with the Hairy Devourer, and Eddie starts feeding it candy. This is the kind of fine tuning that good broadway comedies have. The fun little setups that allow you to guess where the story is heading even before it gets there. Great job by Cohn and Mishkin. 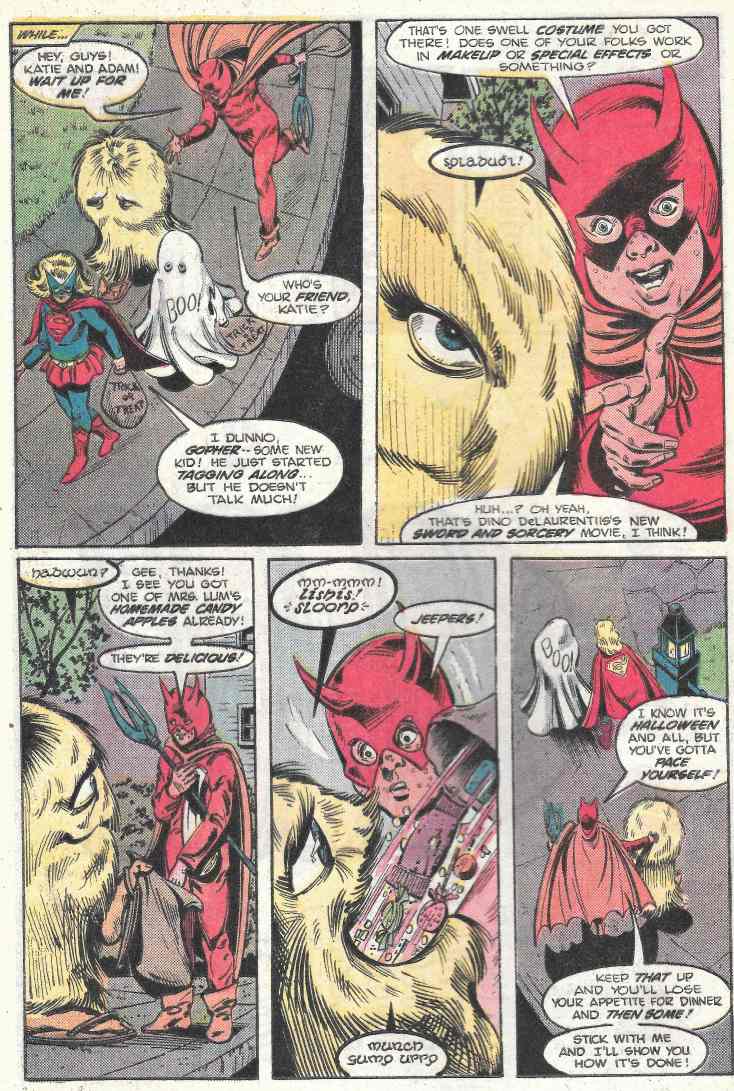 And while Sharon and Marla get ready to hear the Windows play, the band members are having a bit of an issue with their lead singer’s closing mystical music number. They try to take a face-to-face meeting to discuss it, but it appears that can’t happen… 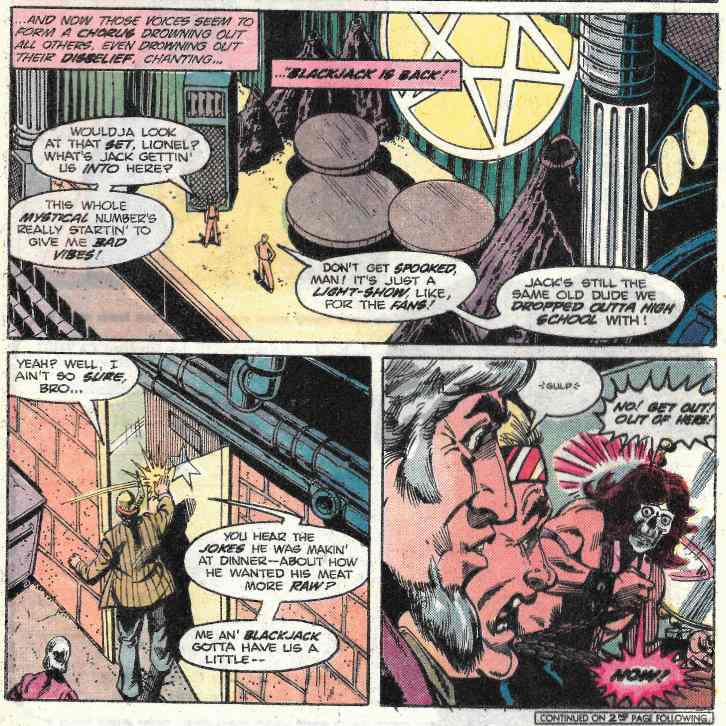 …because Jack currently doesn’t have a face.

After fixing himself up a bit, he calls the band back inside and goes over what the deal is with his coming back from the dead and all. The pair seem to be okay with it for the most part. 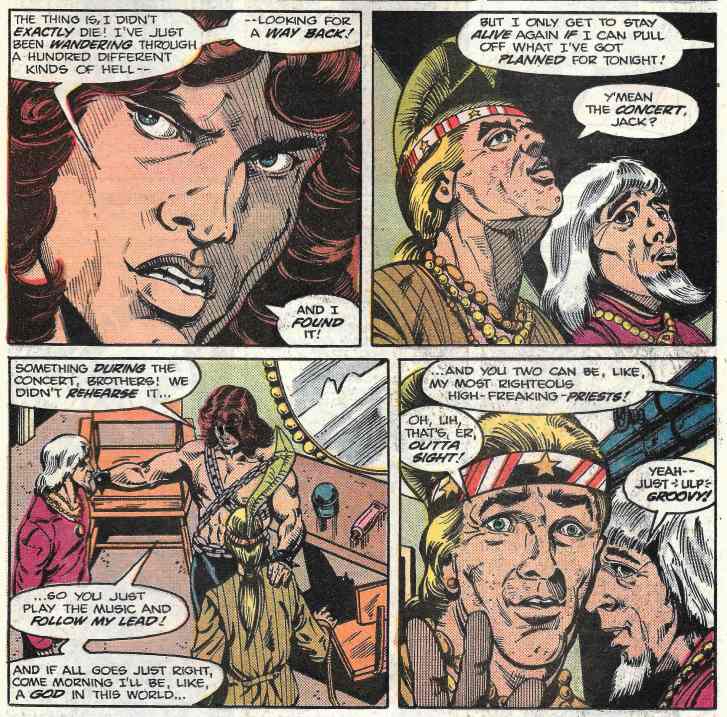 As does the audience as soon as BlackJack starts the show, possibly because a lot of his audience are women, he’s got a sweet demonic voice, and the guy has the body of Jason Momoa. 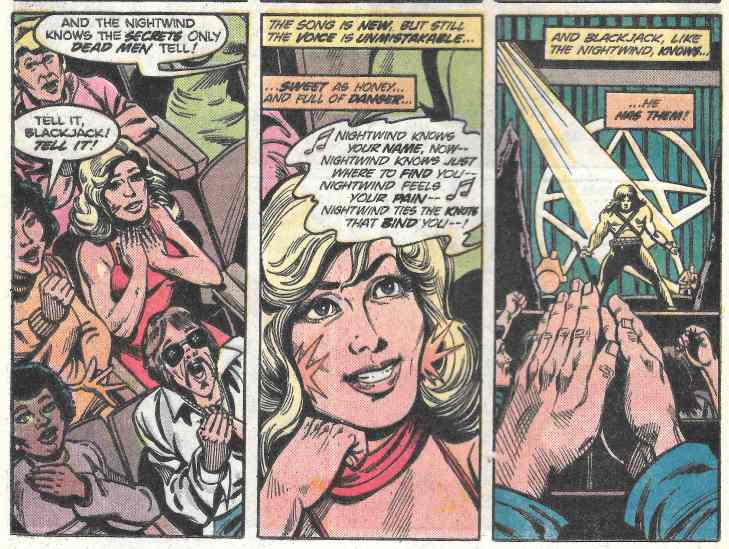 Sharon falls completely under BlackJack’s spell and the rocker picks her out from all his many choices to “join him on stage” for the final number, something that we all know won’t end so well for Sharon if BlackJack gets his way. 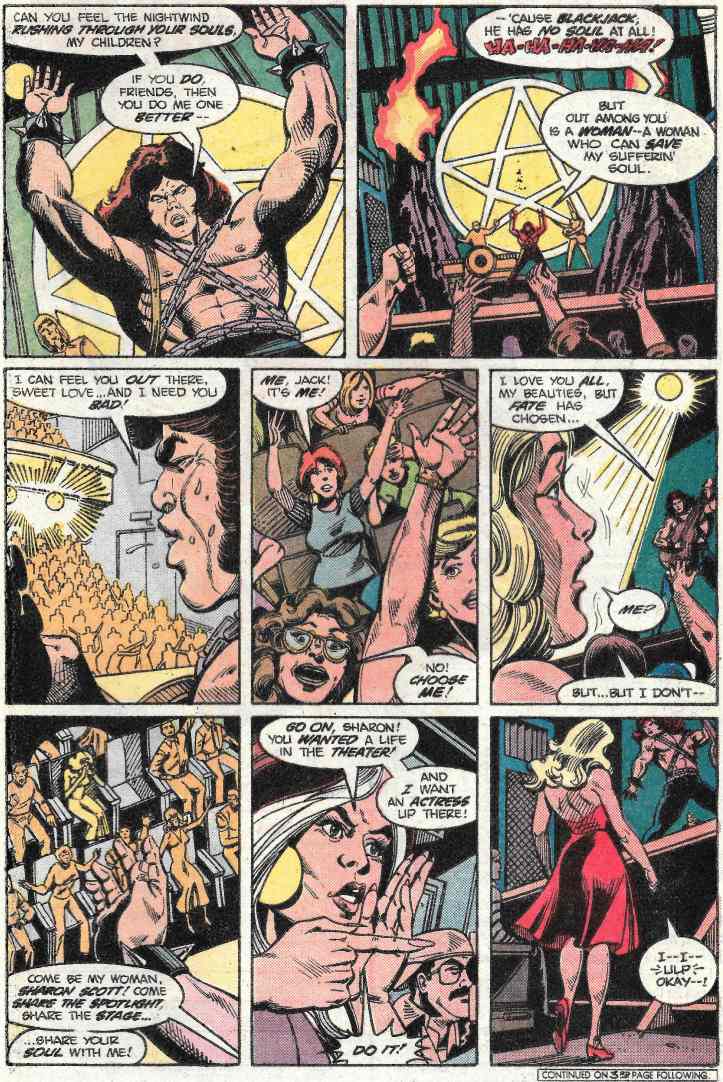 And while Sharon is getting trussed up like a human sacrifice for BlackJack’s final number, the Hairy Devourer and Eddie are just wrapping up a successful night of trick-or-treating. Suddenly the Devourer feels a pull it cannot ignore and Eddie has to take off after it. 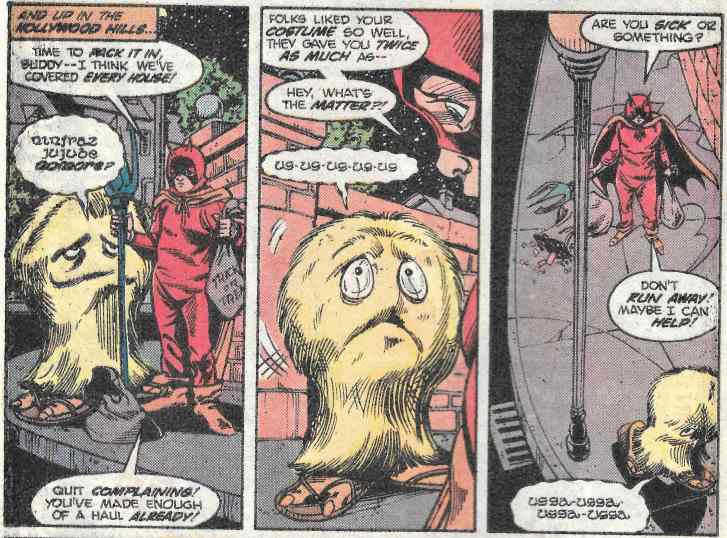 Cassidy meanwhile has had enough with this wild Devourer chase and he leaves Cain for the concert. But not before dropping a hint about BlackJack having been dead for a dozen years that pops a lightbulb in Cain’s cranium. 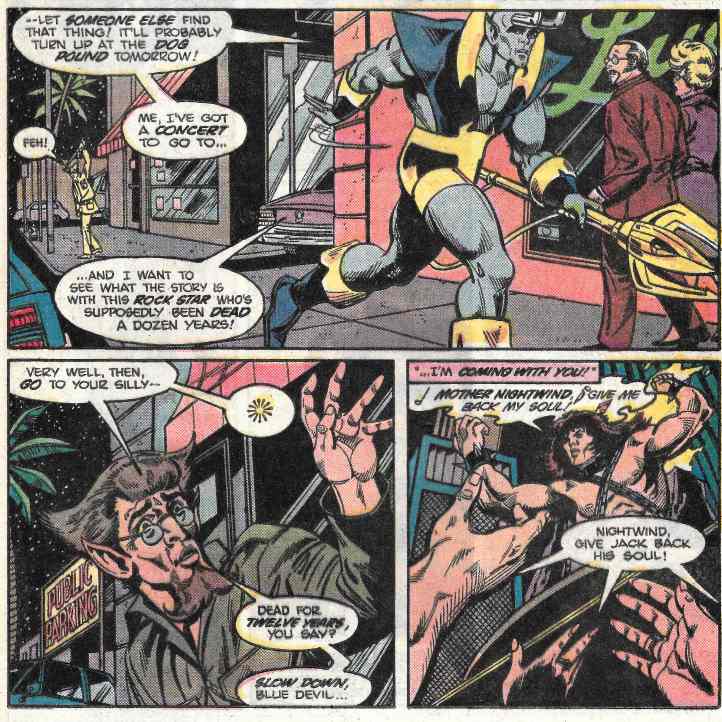 And speaking of craniums, BlackJack appears to be pulling mystical energy from the crowd in order to live eternally. All he needs is for the Devourer to appear…but suddenly, it doesn’t. 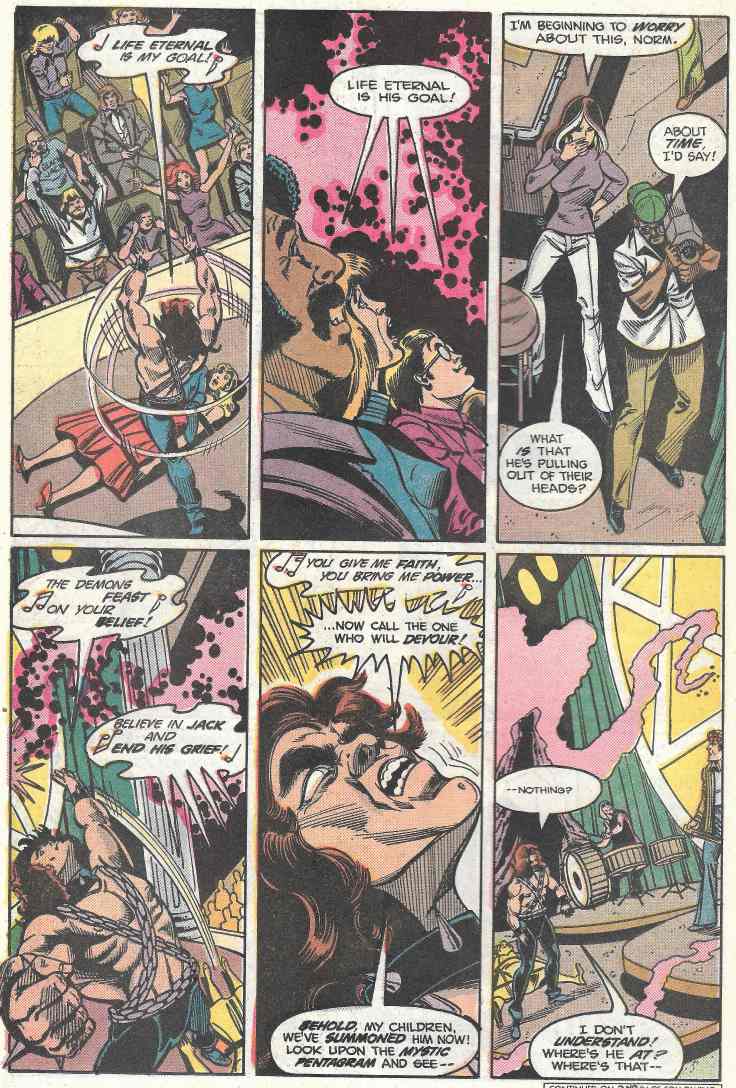 Or rather it does, but knows how to make a grand entrance. With Eddie in tow, the Devourer approaches the stage and BlackJack transforms him into… 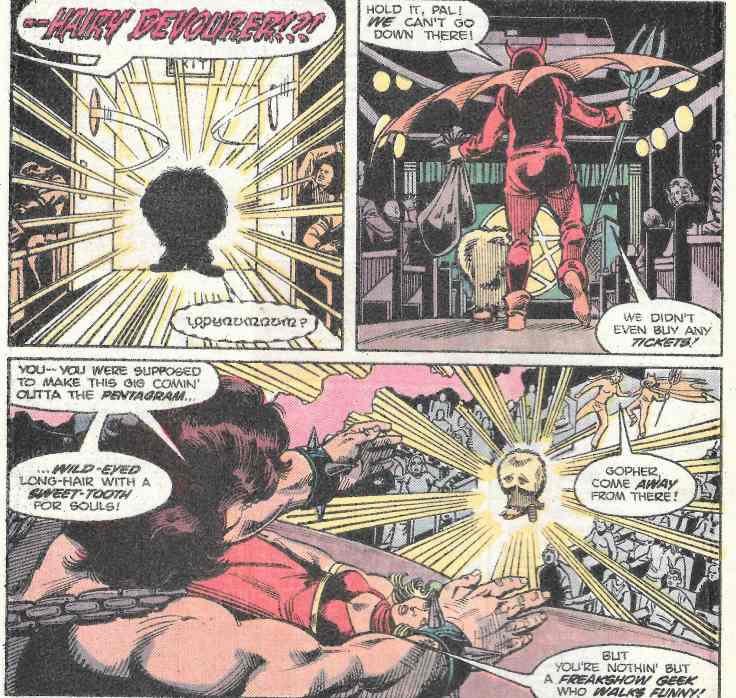 This horrible version of himself that is part nasty hairball and part fanged terror. Of course BlackJack wastes no time in telling it to eat Sharon so he can gain eternal life. 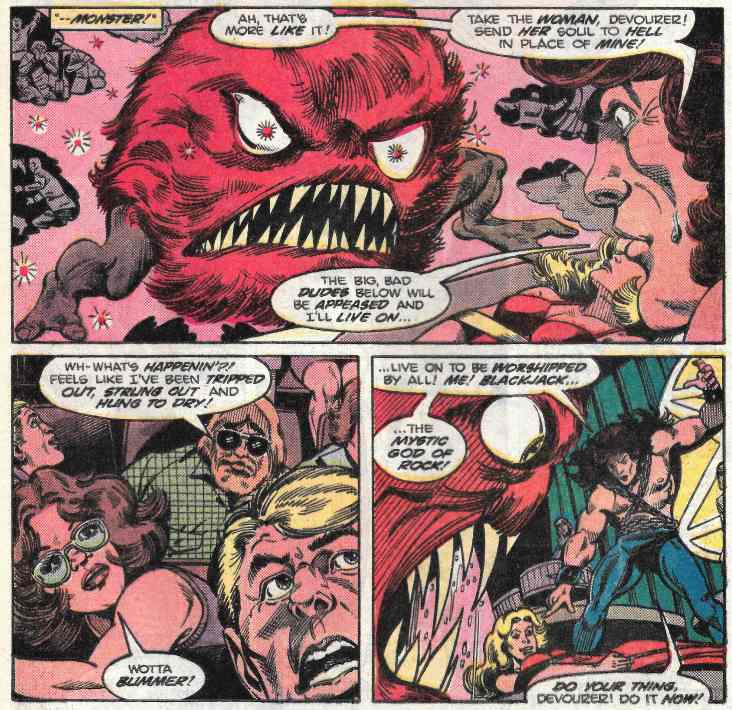 Unfortunately for BlackJack, two problems present themselves that will mess with getting what he wants. The first is that the devourer has kind of a sour stomach from eating too much candy… 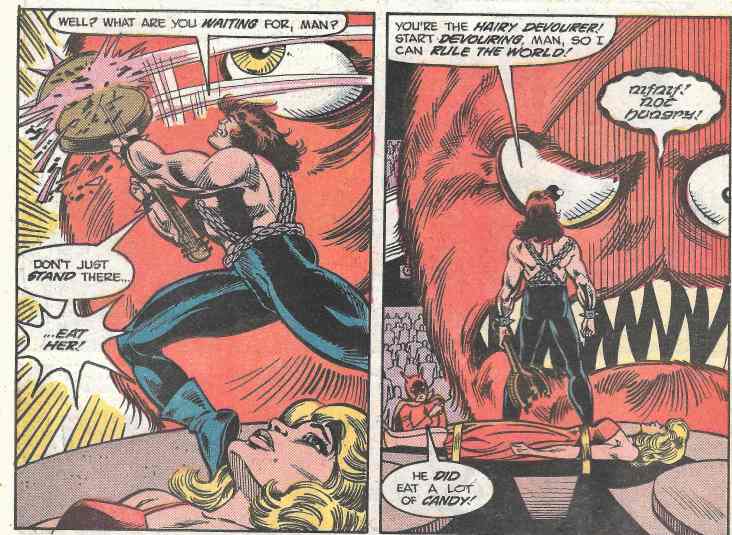 And the second is the arrival of a certain Blue Devil! 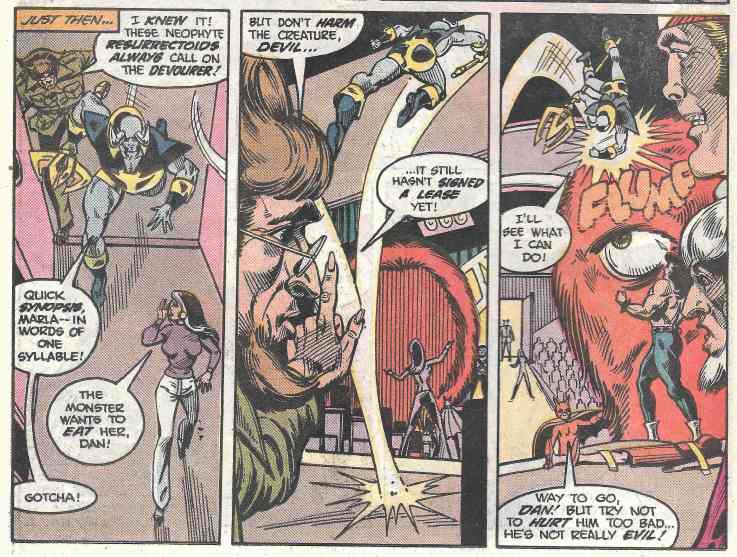 The battle with the Devourer rages, but BlackJack has a moment where Blue Devil is so distracted that he could be toasted very easily. Until Eddie / Kid Devil uses his soap bubble gun to throw off Jack’s aim. 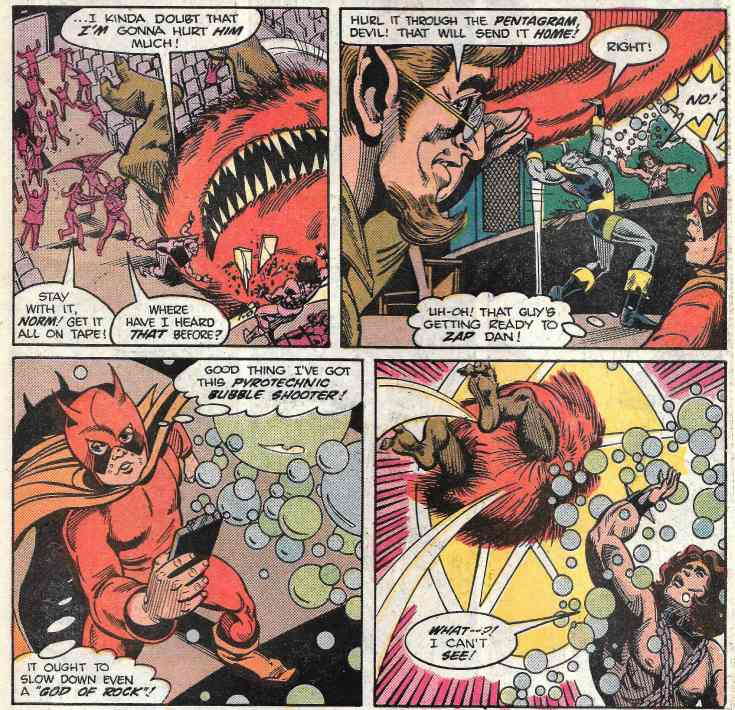 Jack is mightily depressed by this occurrence and tries to rally his bandmates for another try. They aren’t having any of it and skitter off, leaving him to face Blue Devil man-to-man.

Which our undead lead singer is more than happy to do until Cain starts fiddling with his pocket watch, noticing that it had stopped at 9 o’clock when it actually was midnight. 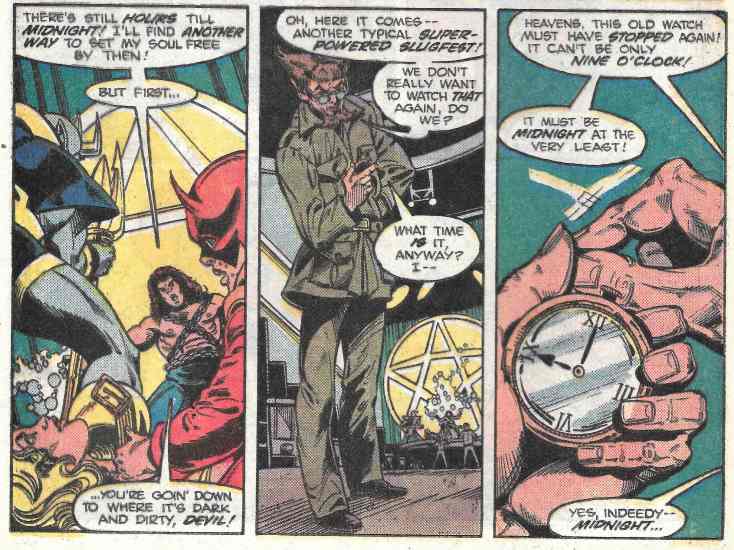 A fact that causes the chiming of the Thrillmore’s clock, a sort of Cinderella effect that causes both BlackJack and the theater itself to return to their proper stats. For BlackJack that means death, of course. 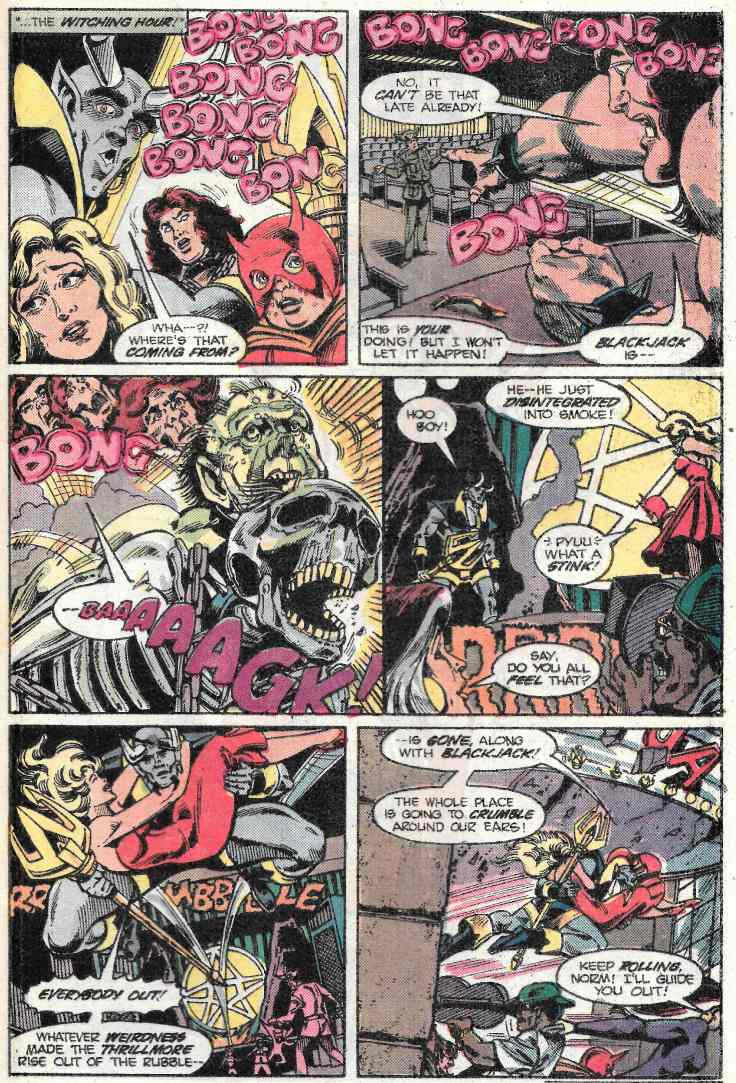 As the Thrillmore falls apart completely after Blue Devil and team’s exit, the group is left on the sidewalk to pick up the pieces, as it were. The Windows decide to continue on without BlackJack and Cain makes Cassidy an offer on his mystical spare closet space. It seems like it is one Cassidy doesn’t get the opportunity to refuse. 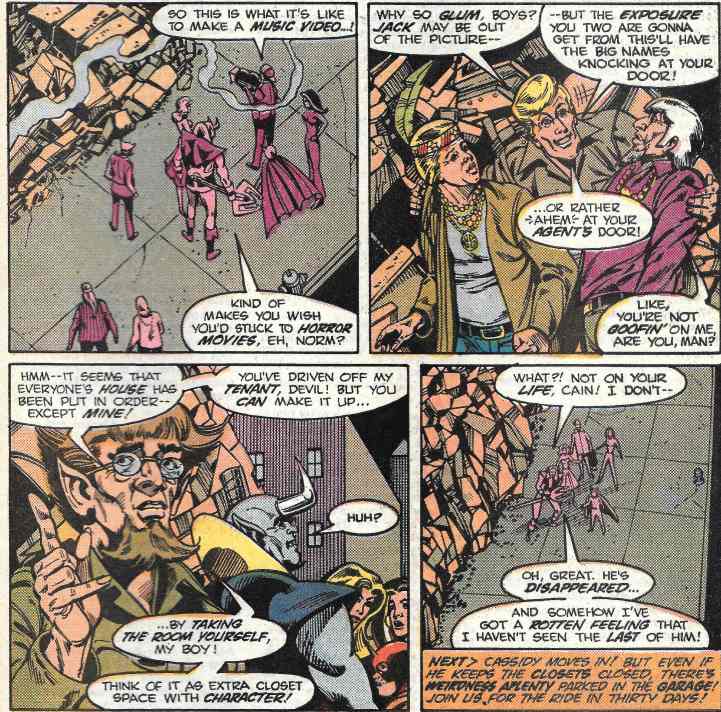 And that was Blue Devil’s beginning with the House of Weirdness, a locale that would factor into several stories from now until the series was cancelled at issue number 32. Sure, the jokesy format of Blue Devil won’t be for everyone, but I greatly enjoyed them. They were fun reads and one…Hell of a good time.
Posted by SonOfCthulhu at 5:30 AM