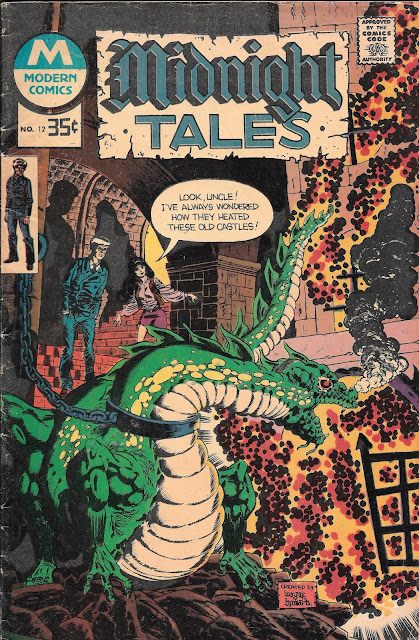 Charlton tries something a little different in the horror/anthology genre

Next up we have a Modern comics reprint of some classic Charlton horror tales that were just a little different than the standard of the day. The entire Midnight Tales publication was the baby of one man: Wayne Howard. Howard was responsible for most of the story and art on each issue and more importantly, the concept the book would work with that issue. This is how it differed from the standard horror comics Charlton put out at the time.

Each issue had a framing sequence that setup the stories contained within the book. So, while it might look like a standard anthology, each story was somehow loosely connected to the wrapper pages that preceded and followed it. All of these framing stories concerned a Professor Coffin (a/k/a the Midnight Philosopher) and his niece Arachne who worked at Xanadue University, a setting that placed them within the E-Man universe. Howard would set these things up and do most of the story and art himself, sometimes pulling in other greats of the old horror tales like Nicola Cuti, Steve Ditko, Joe Staton, Don Newton, and Tom Sutton.

For all his work on developing and implementing this concept, Howard was awarded the right to put a “created by box on the front of each issue. This was a practice almost unheard of in its day, but due to books like Midnight Tales, it soon became the norm.

Sadly the book’s bi-monthly schedule and its three short years of publishing history means we only have 18 issues of this in existence. Still it sounds like a fun little read so let’s see what the book provides, shall we?

Our setup this issue is that Professor Coffin has a mummy. Yeah, that didn’t sound right even on paper. He’s also greeting all of these explorers freshly back from various exotic locales. How does all this fit together? 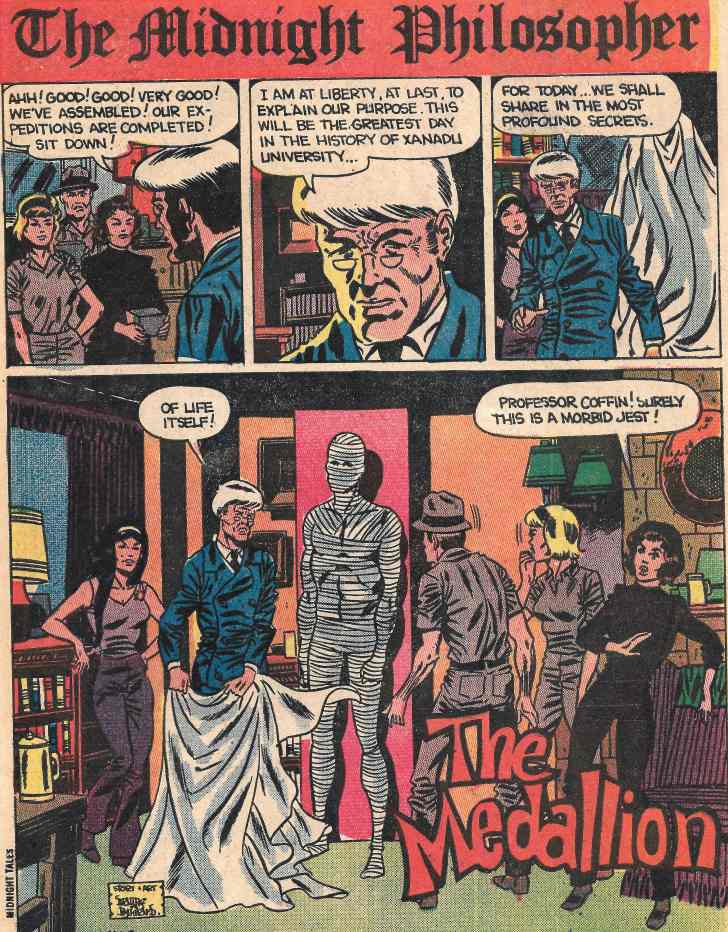 Good question!. The Mummy can come back to life IF it is wearing a special medallion that will grant the secret of immortality. Only problem is that the medallion was split into three pieces and those were secreted around the globe. Specifically, in places our group was just sent to with the express purpose of collecting said pieces. 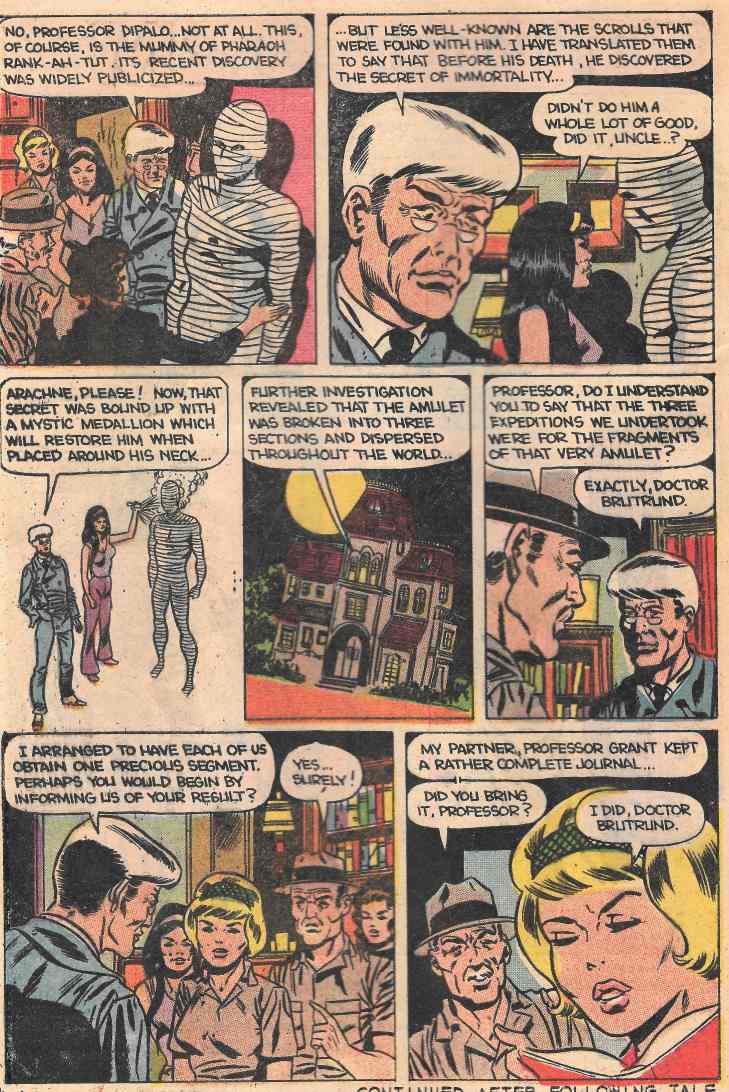 And just like that, our two-page setup complete, we are off to the races as Professor Janet Grant tells us the tale of…

Janet Grant’s diary entry takes us into her group’s return through the Amazon jungle from the remote Incan alter that held the Medallion. I’m a bit surprised that obtaining the medallion isn’t the setup of the story, so from the first page this story subverted my expectations. 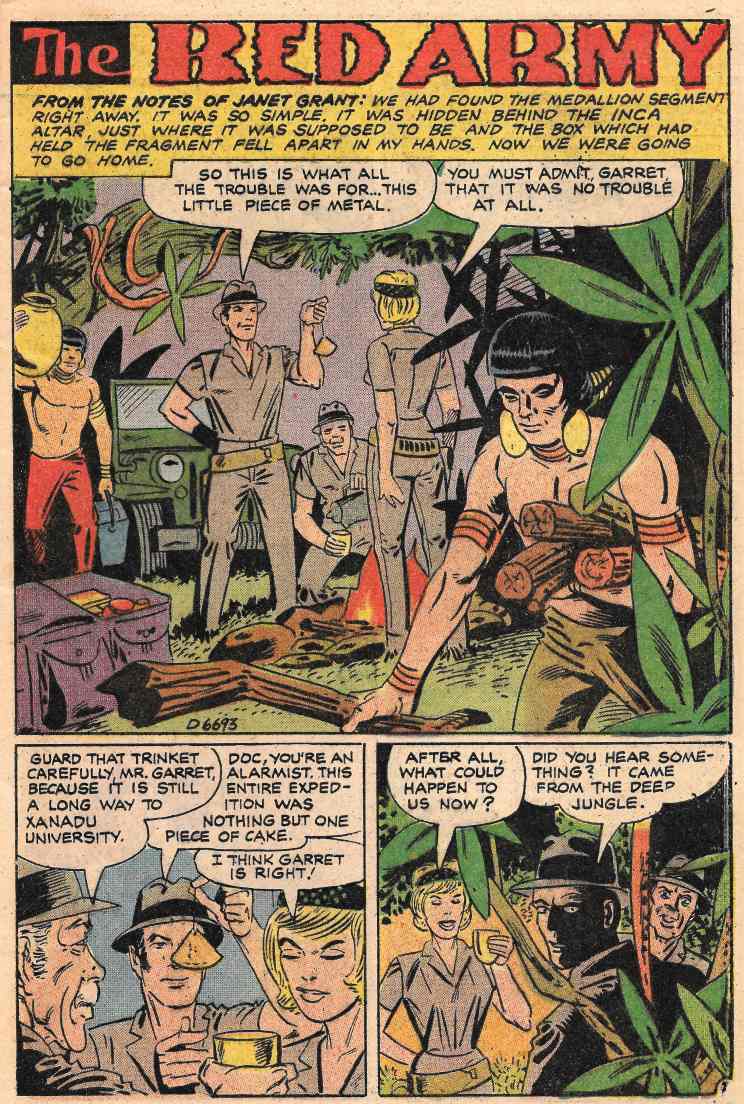 Even if the rest of it was pretty much a rehash of several other stories. The group is lost in the dangerous jungle. We are shown an unusual horror that lurks around them: namely these marching army ants who will devour anything in their path. 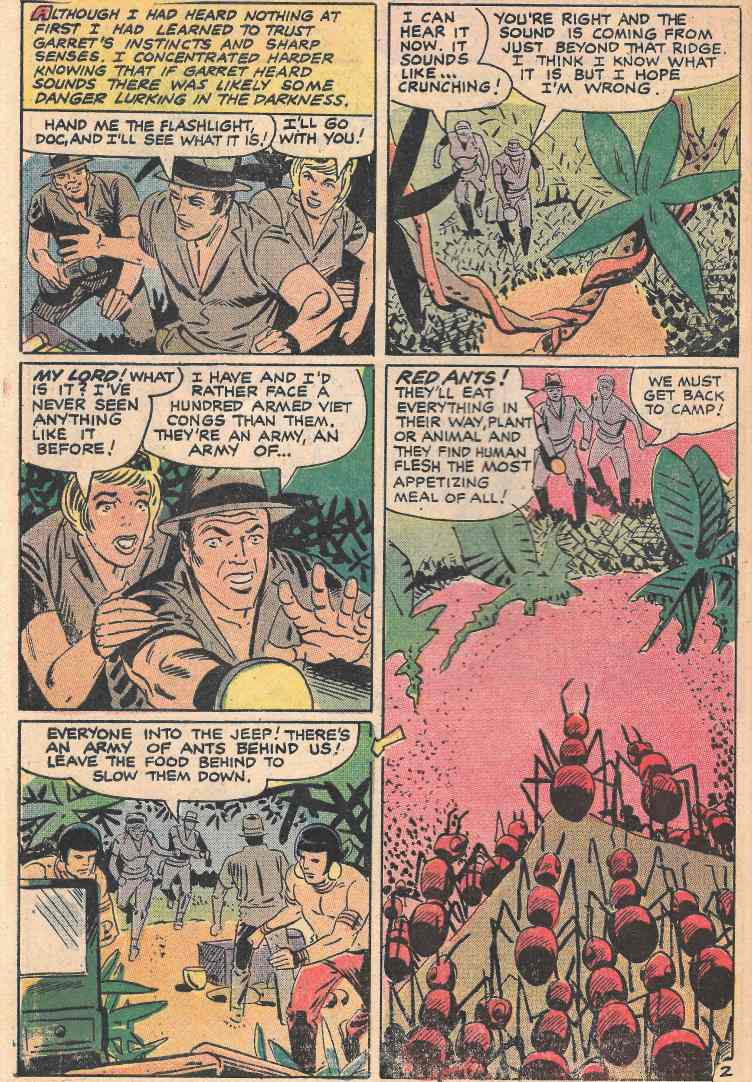 Now all we need is an accident, a few injured party members,… 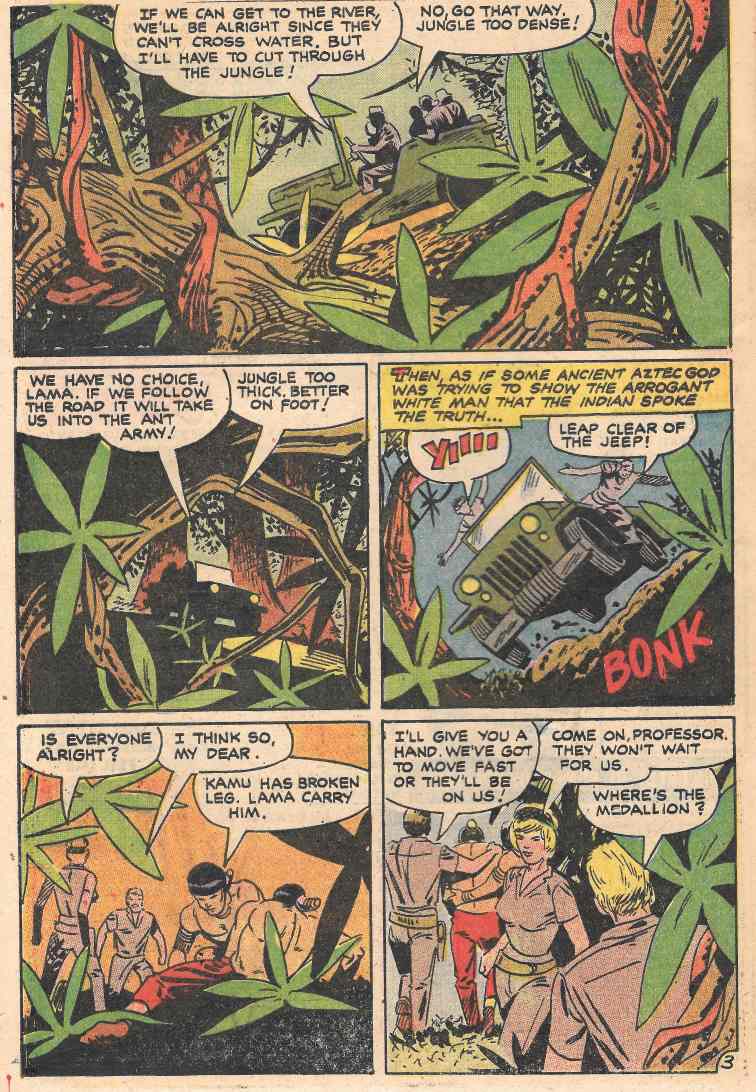 … one of the guys deciding the injured are slowing them down and taking matters into his own gun-wielding hands,… 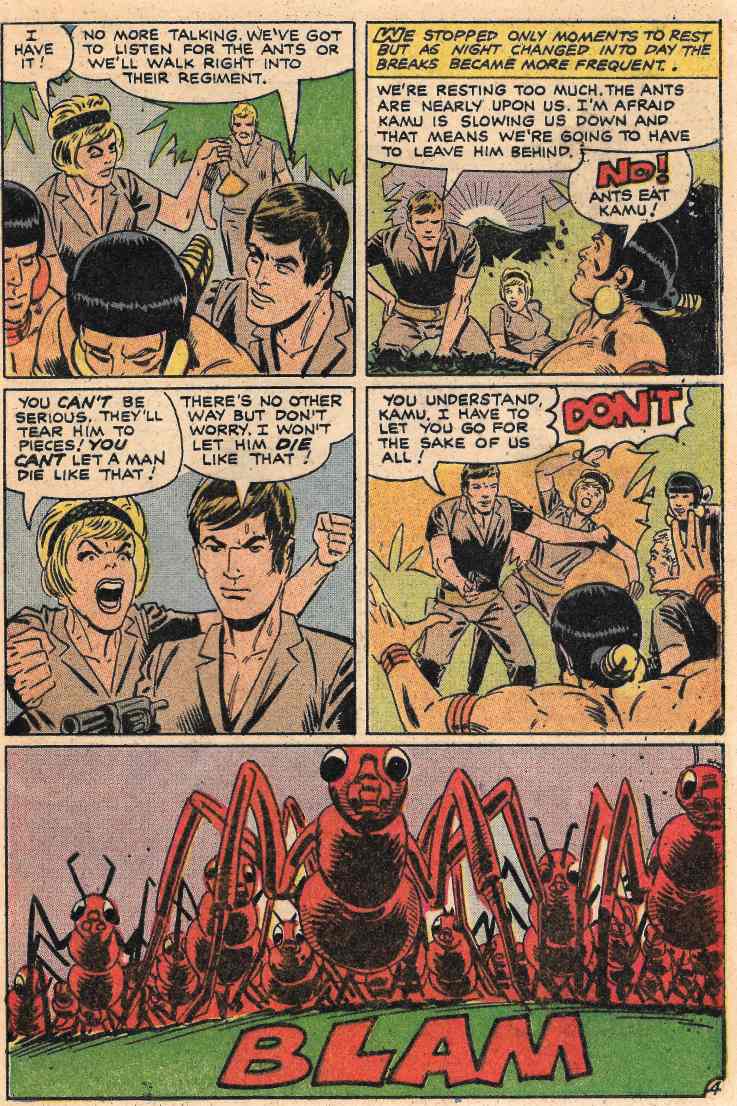 …the guides revolting and they guy shooting them too, followed swiftly by “Hey! You’re an asshole that’s shooting everyone, We are going our own way back,”… 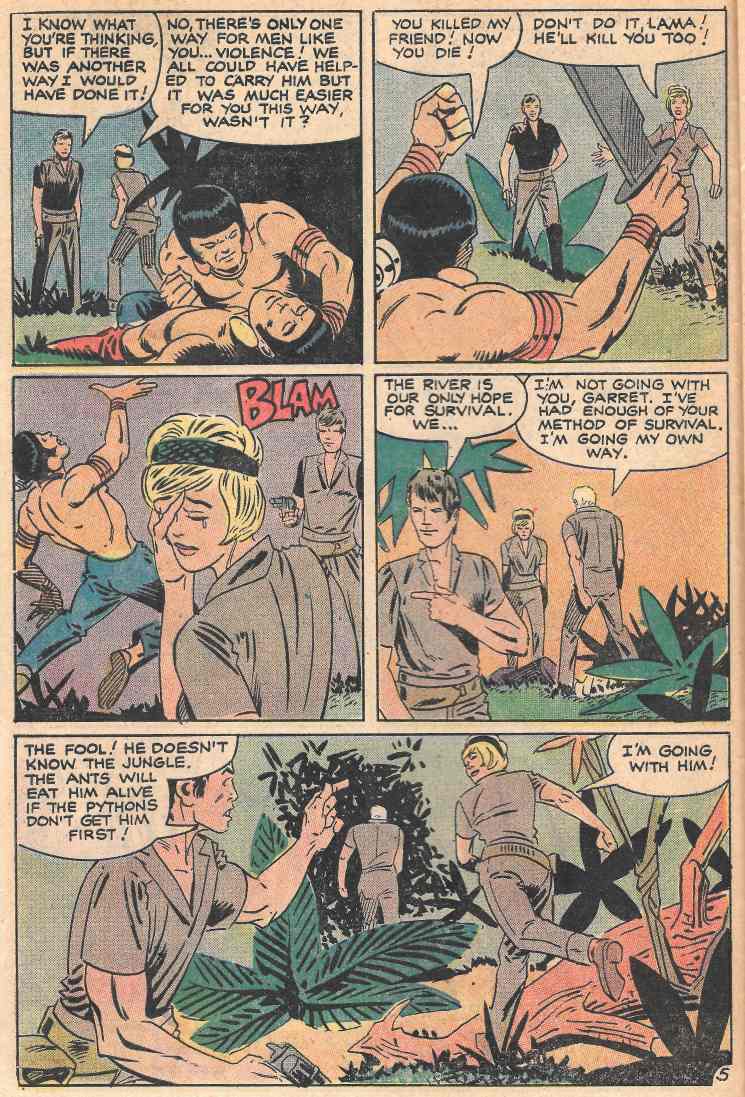 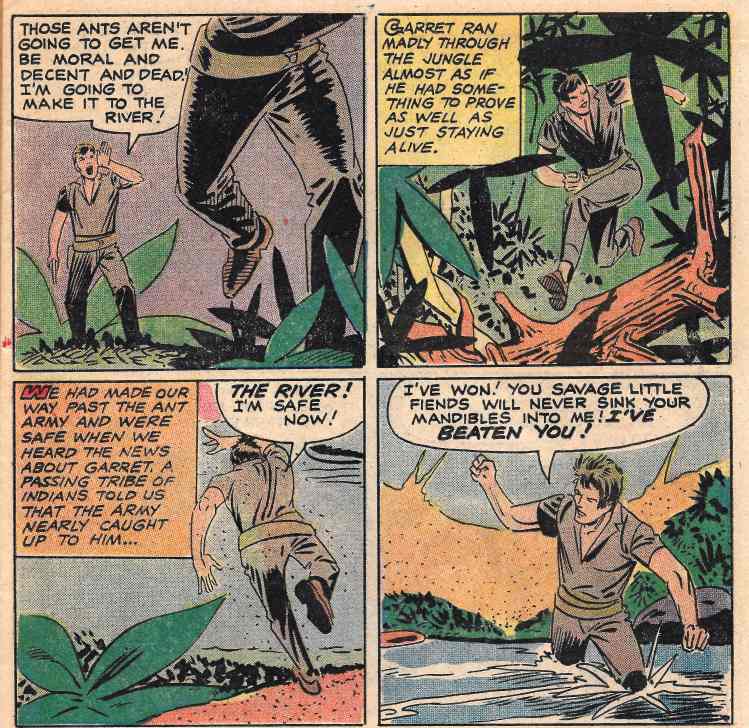 This should have been called "The Mauve Navy." Yeah, that did not go quite as I expected either. Nice bait and switch there, Cuti.

It occurs to me that whomever is telling the story isn’t dead and these are all past tense, so that makes me lose a little bit of the tension and apprehension I typically feel for the protagonists of these short horror snippets. 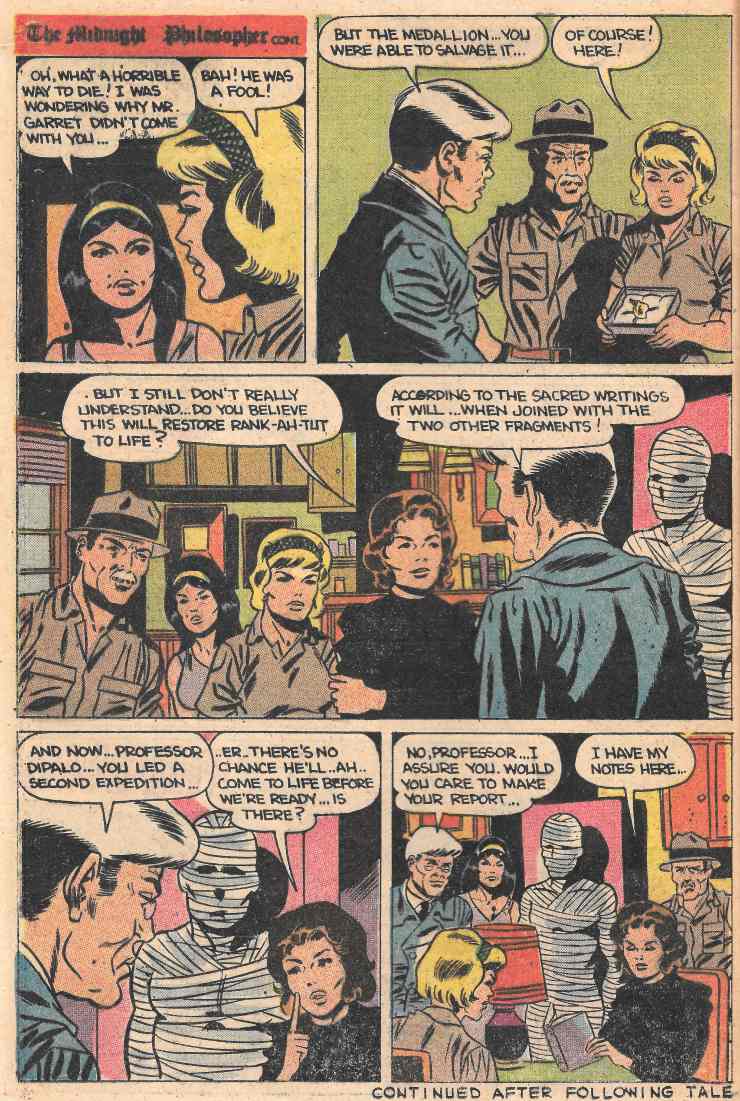 Next up we take a jaunt with these gents to the remote Himalayan Mountains where they have to find the hidden palace of an outcast monk who holds the medallion. But before the group can reach him, they encounter something much more bizarre... 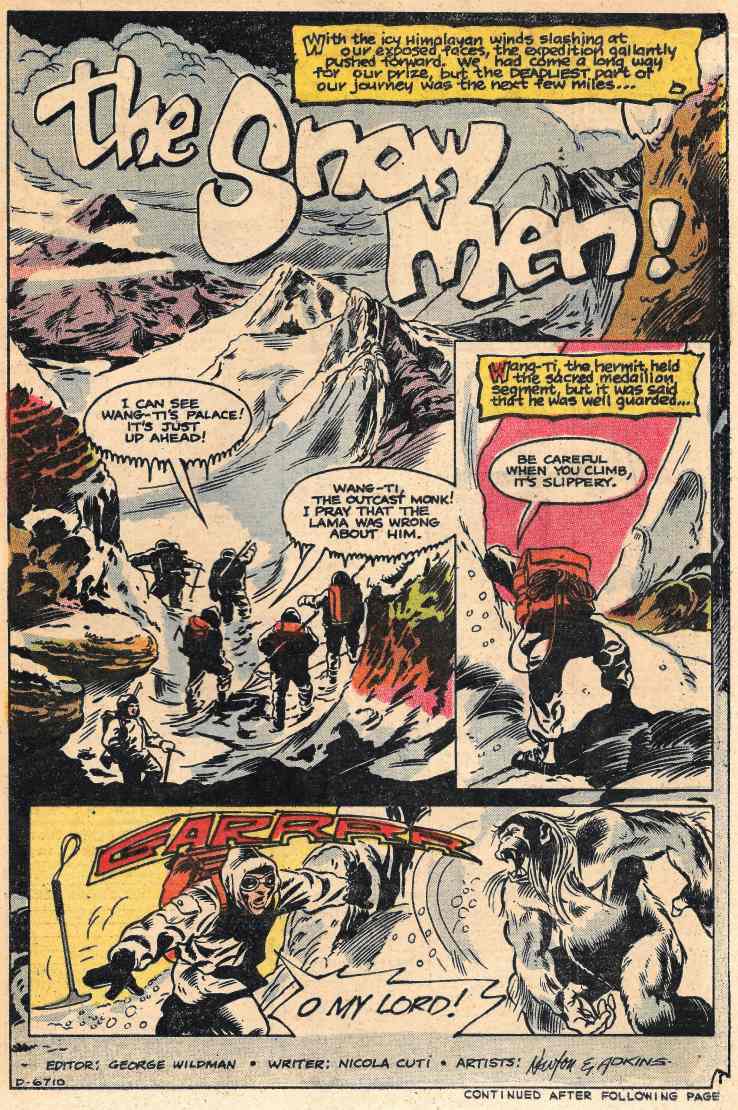 …that’s right! It’s an entire tribe of yeti. The hairy horrors make off with the only girl in the group while shedding bullets like superman. Of course, two of her heroic cohorts go after her. 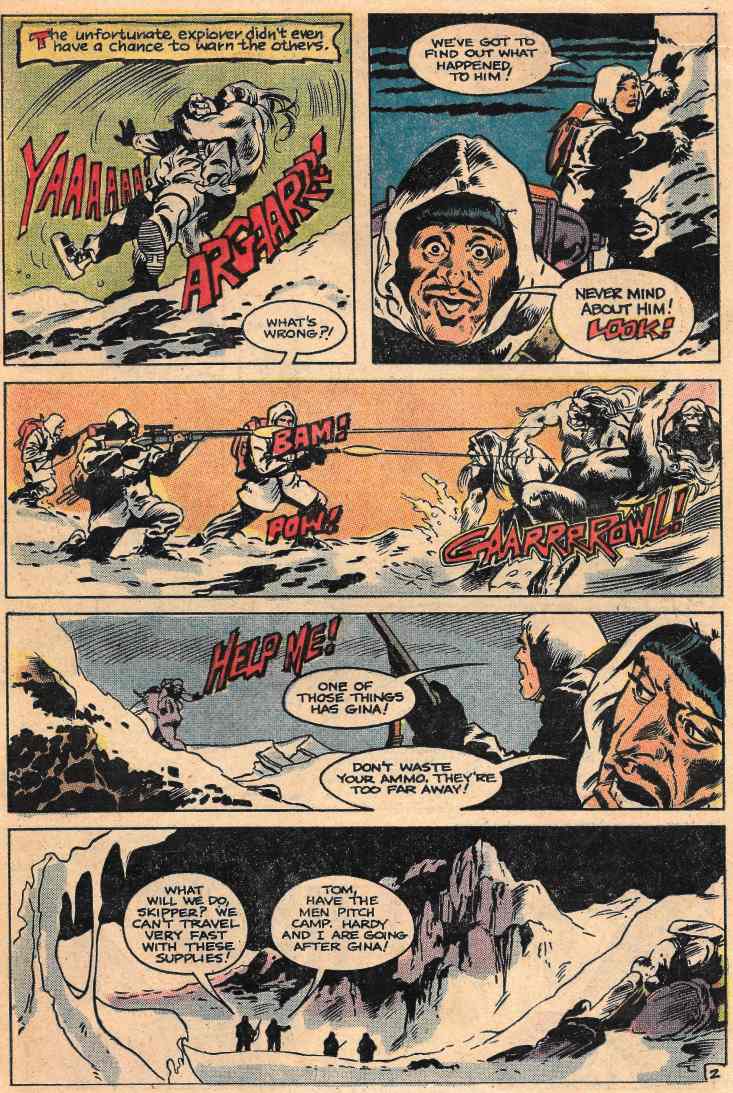 Nothing could have prepared the explorers from finding out that the yeti is taking Gina to the very palace they planned on visiting. The palace of the mad monk Wang-Ti, a sexual pervert who uses yeti’s to collect unwilling women for his harem of dancing slave girls. 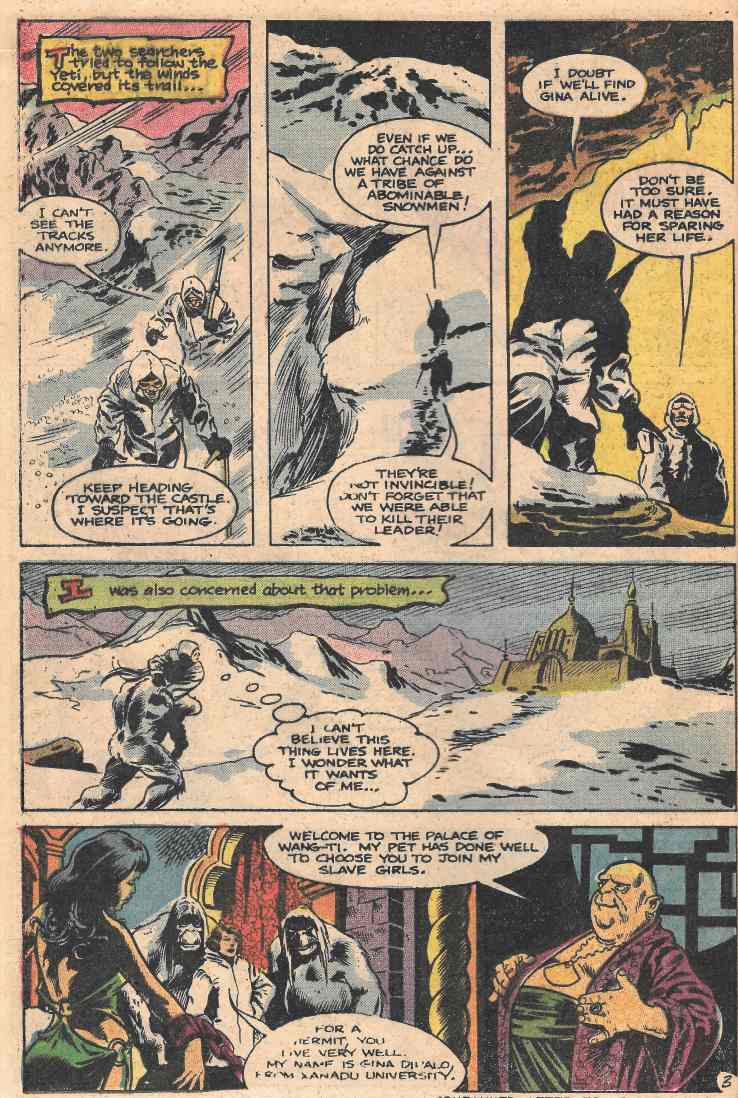 Gina finds out how loopy the guy is but confirms he as the medallion. All this is overheard by the two men who’ve come to free Gina from the yeti, along with the fact that Wang-Ti is going to attack their camp with an army of yeti next. 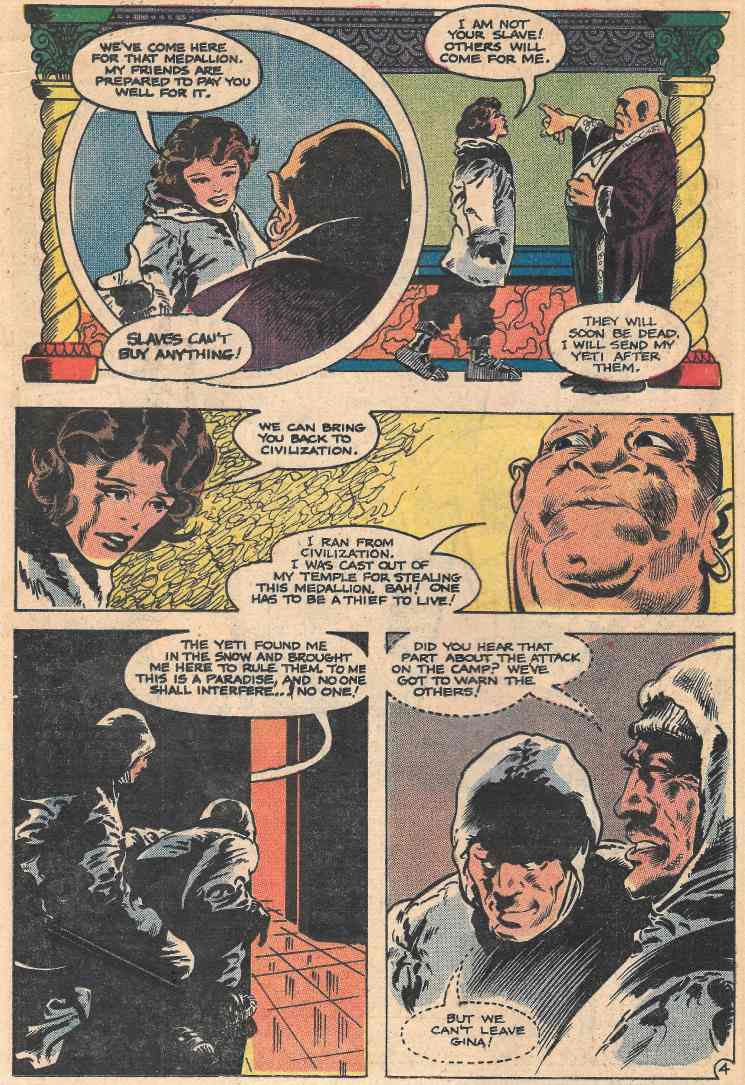 While the men figure out a plan to survive the yeti assault, Gina gets smacked around by Wang-Ti for not being compliant enough. 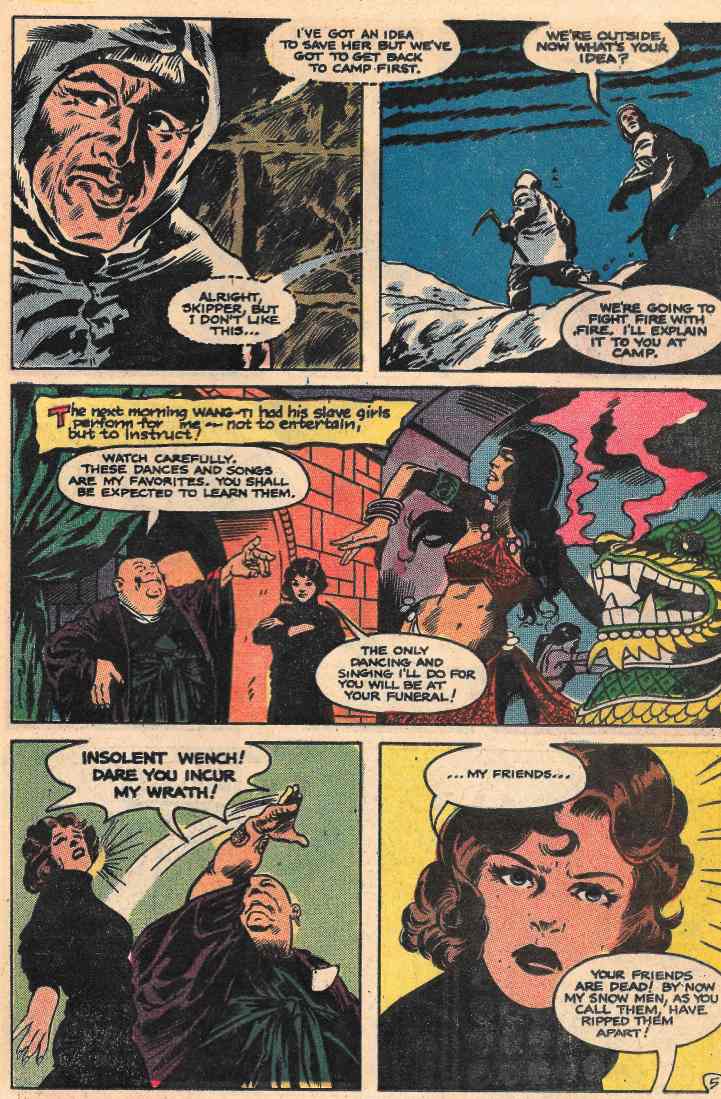 Suddenly all of the men from camp burst through the front door. Somehow, they survived the yeti assault. They free Gina, the slave girls, take the medallion and hand cuff (who brought hand cuffs on an artic expedition to the top of the Himalayas?) Wang-Ti to deliver to the proper authorities. 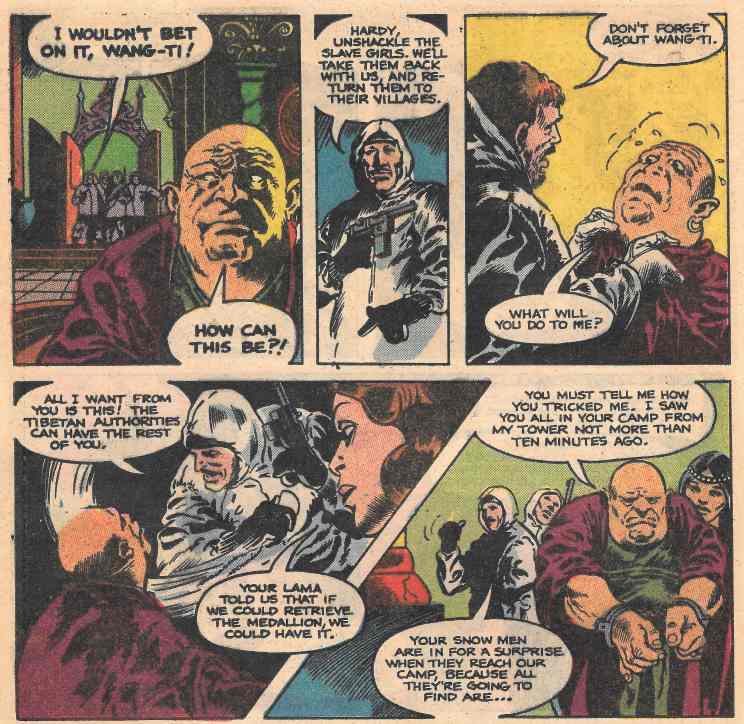 As for his yeti army? They’ve been giving something to do that will take them quite a long time. 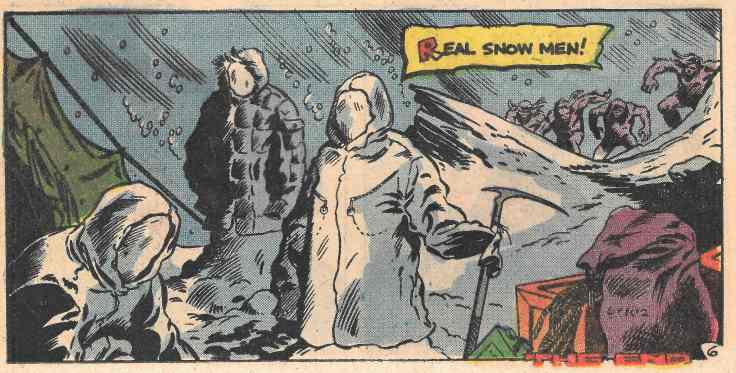 See the snow men in the tale were these guys, NOT the yeti. Clever, book. Very clever.

Now we are down to the last piece. 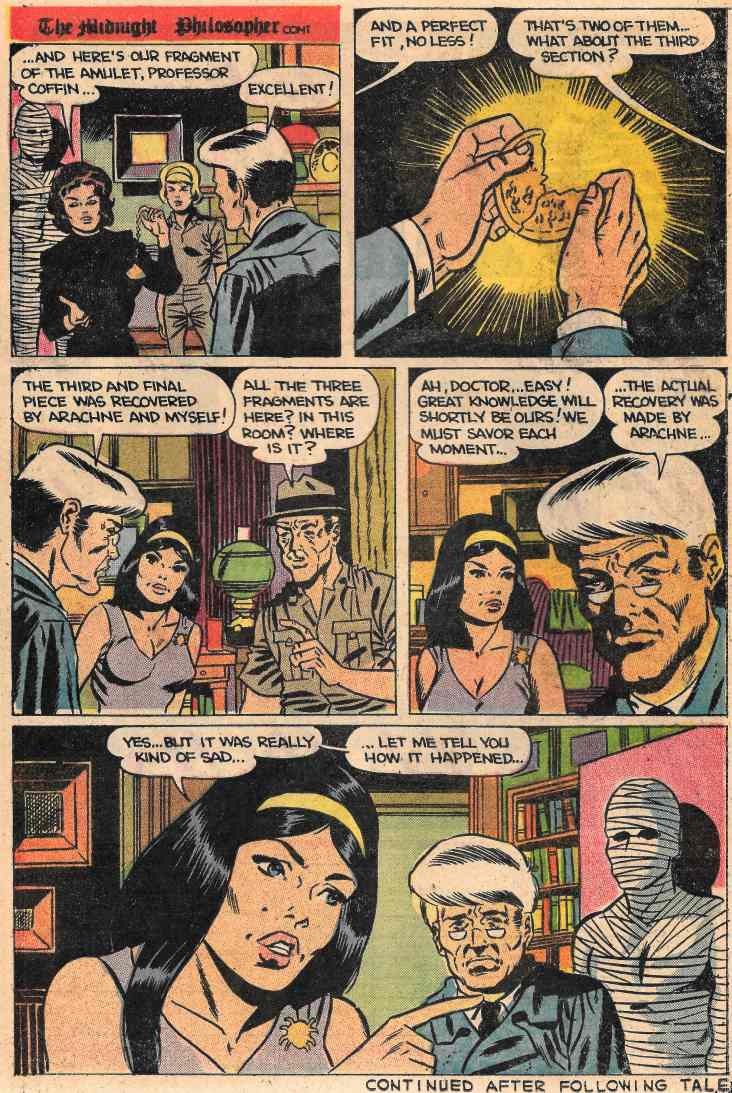 This piece seemed to be the easiest to gather, so that’s why Professor decided to go after it himself. Acquiring the piece from a Scandinavian sea-side villager named Timman should have been a piece of cake for the Prof and his daughter. But they hadn’t counted on Timman being MURDERED!!! 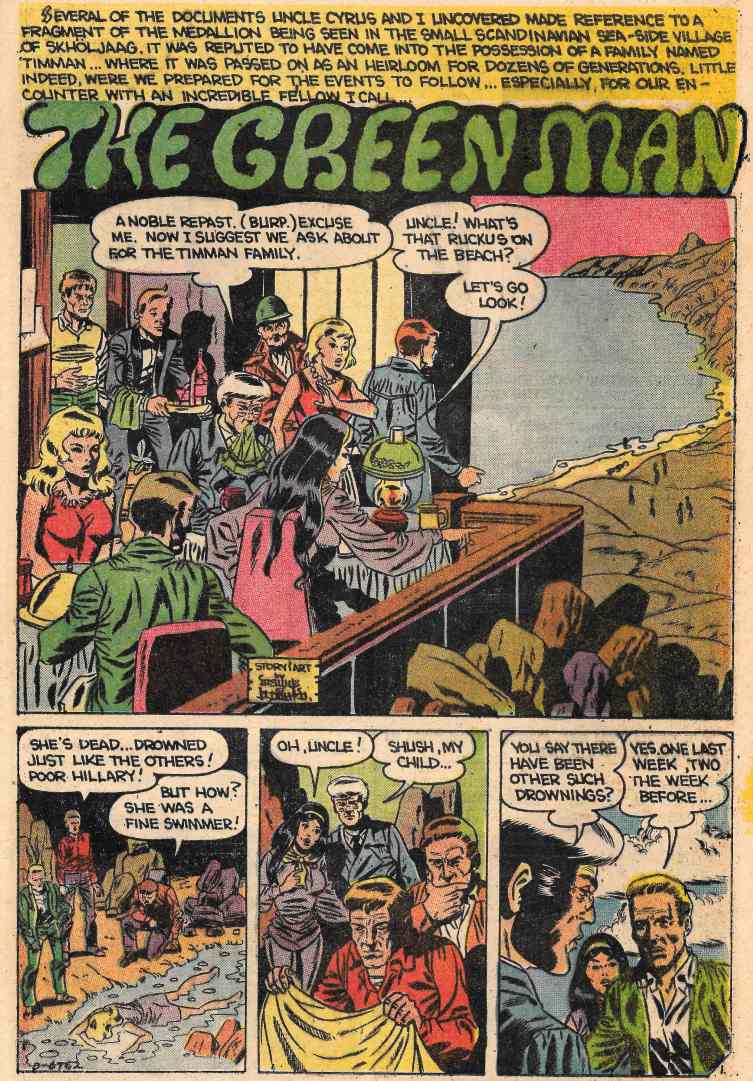 That’s right, the body that has washed ashore is Hillary Timman. And guess what she DOESN’T have anymore? If you said “the medallion” while that is technically correct, you could have also answered parents. 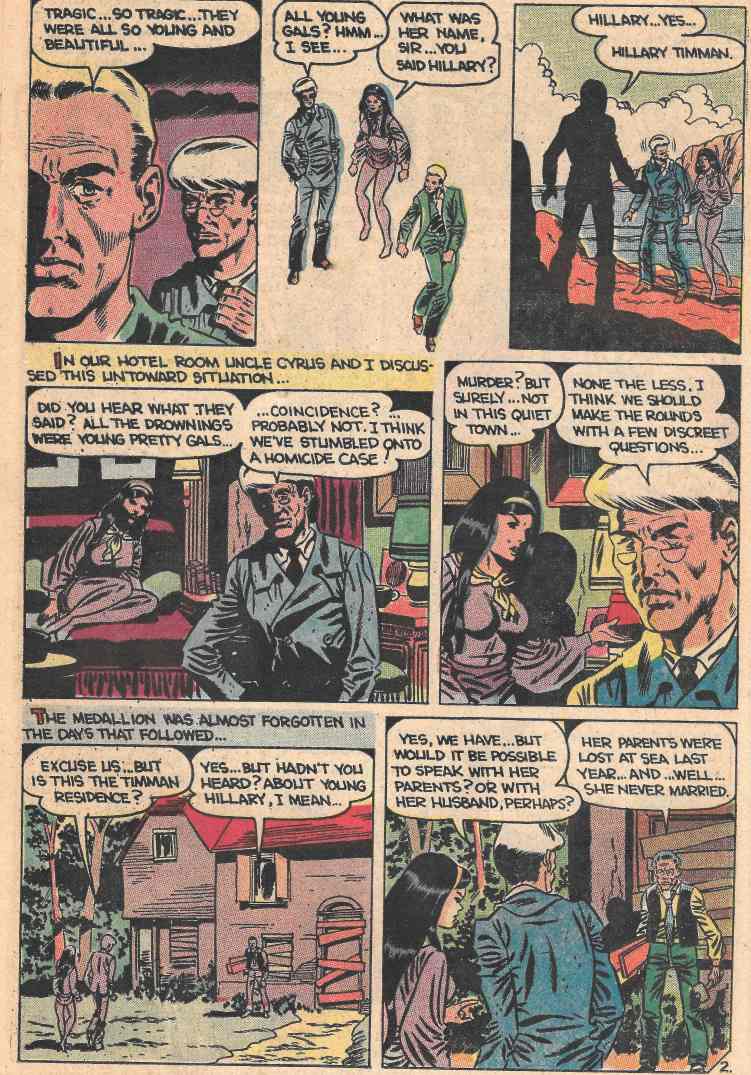 And since that leaves no one who would have the medallion, Professor Timman surmises that the killer of Hillary Timman must possess it now. While he questions people up and down to detect a clue as to what happened to the bodies of the young women who have been washing up dead on these shores, Arachne gets bored and sneaks off to do a bit of exploring. 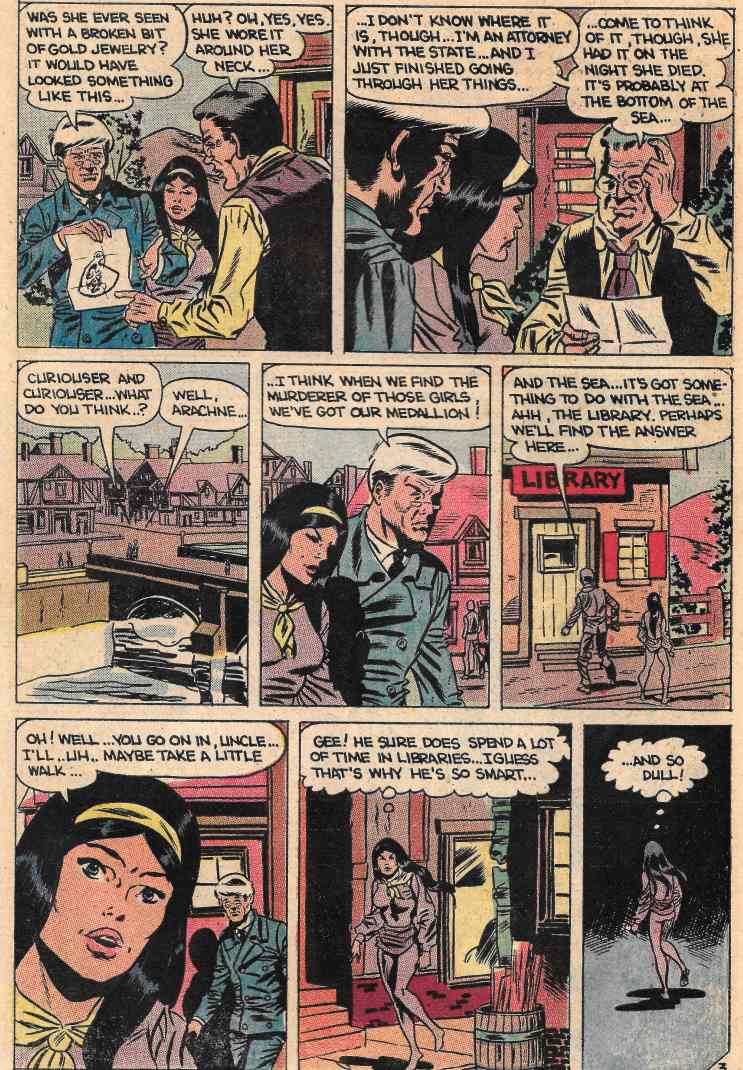 And that’s when she comes across the fishman. The guy has Hillary’s medallion, so that solves at least one of the mysteries we got going. He also has a love at first sight thing with Arachne, which is so creepy and inappropriate that we know he’s got to be the killer. 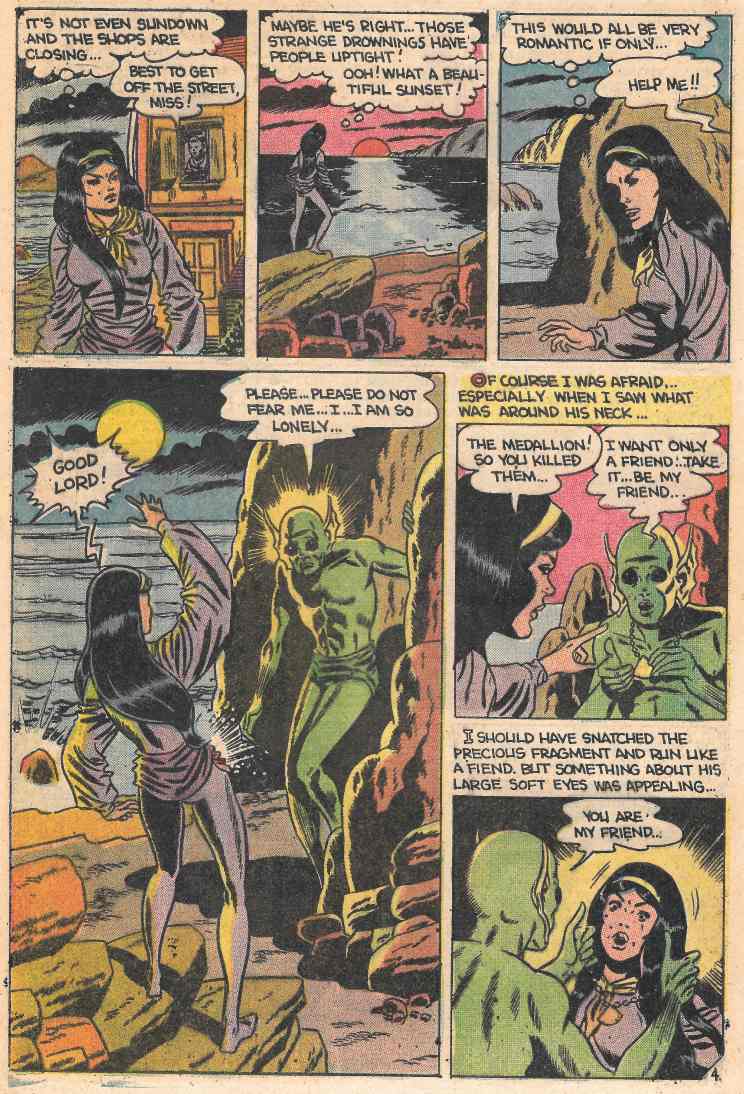 Arachne doesn’t get that vibe and sits around the beach chit-chatting with him about whatever…the sea bottom…fish…how fast you can swim the 5 km. You know, the usual stuff you talk to fishmen about. That’s when he decides she’s ready to meet his parents or some crap, and tells her to “come.” Arachne, proving that she is possibly not the actual biological daughter of the brilliant professor, lets him start taking her into the water before it dawns on her how the other girls died. 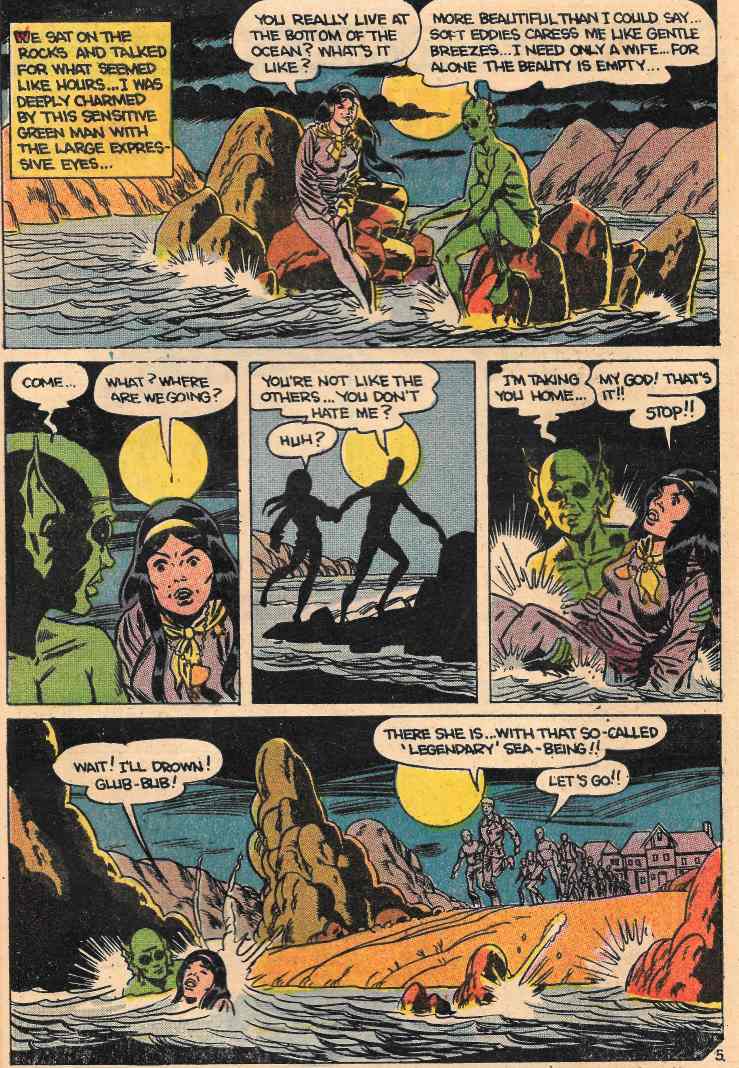 Lucky for her everyone shows up at this point. 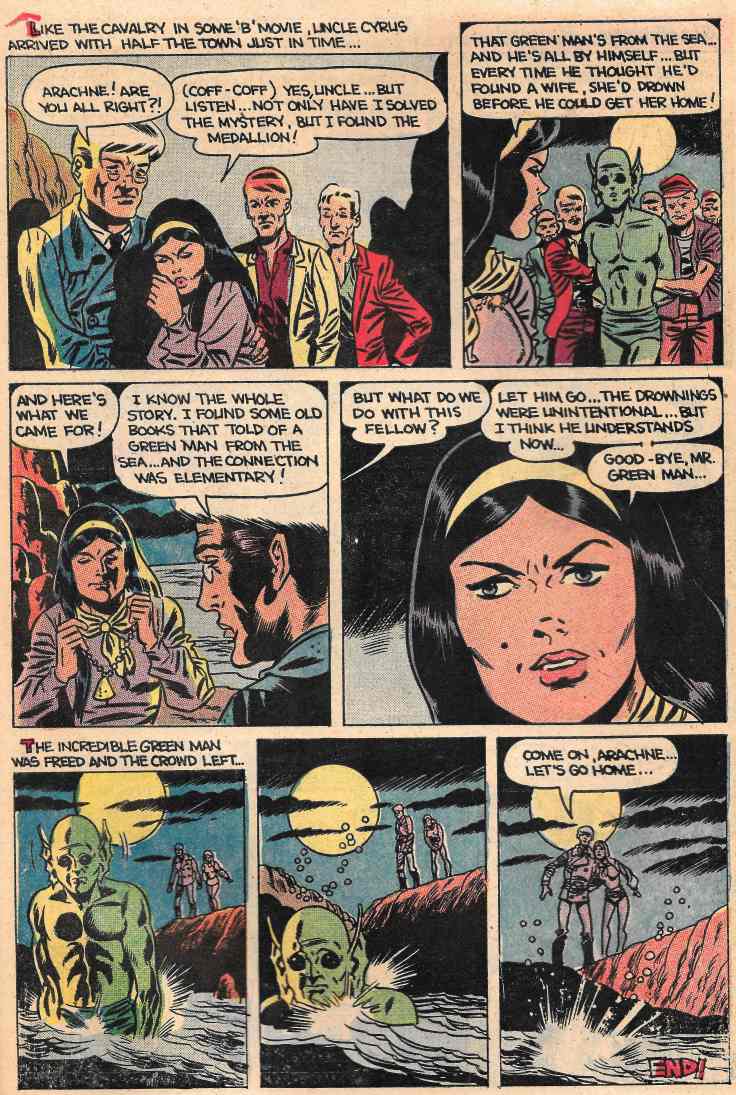 Arachne gets to live, the Professor gets the medallion, the fish guy gets told not to drown people and it’s a happy ending all around.

With that we end the wrapper as they apply the repaired medallion to the mummy and Taa-daa! 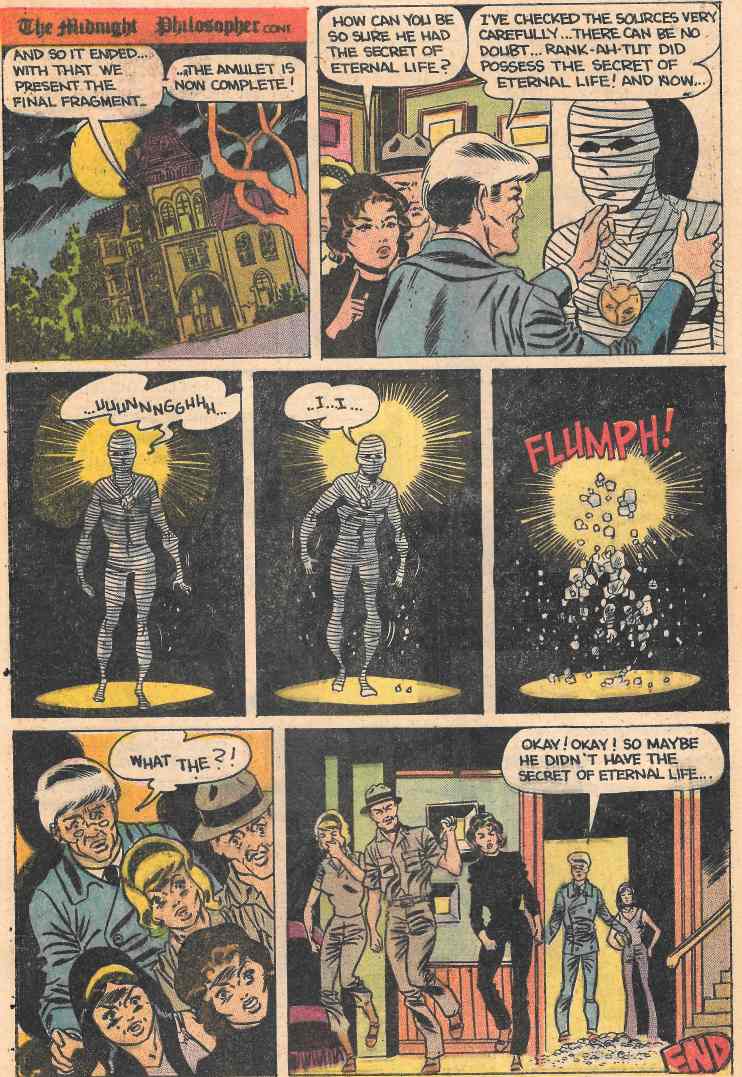 Yeah, the wrapper is kind of a letdown. Still it was a fun ride while it lasted and I’d read more of these if they showed up in the dollar bin.
Posted by SonOfCthulhu at 2:12 AM