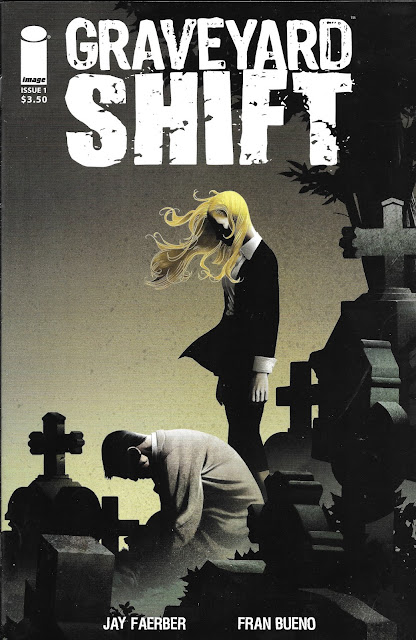 Rounding out a Trifecta of great Vampire tales

Proof that 2014 came up with some great vampire story concepts, we have Graveyard Shift as a second example. While the story it contains runs a bit more straightforward action than the other two books we just looked at, I found myself drawn to it. The four issues released by Image have been traded. I recommend on the strength of this issue that you give them a shot.

The team producing this is the same one that did 2004’s Noble Causes, a book I might have see lurking in the Crapbox somewhere. Writer Jan Faber has been all over the comic spectrum including both majors and many independent titles. He’s got a good grasp of storytelling and writes action well.

As for the art chores on both Noble Causes and this, they are handled by the less traveled Fran Bueno. However, if it says “Bueno” you know the art has to be good. Surprise, surprise! It’s even better than that. I loved the pacing in this and I’m now on the look out any prior work he’s done.

With no more fanfare, let’s start the show on this one and get right into the action on page one. Here we see an early morning police raid on a high-rise apartment that should contain a perp named Tobias Strickland they have a warrant on. Just a routine knock on the door in police speak. 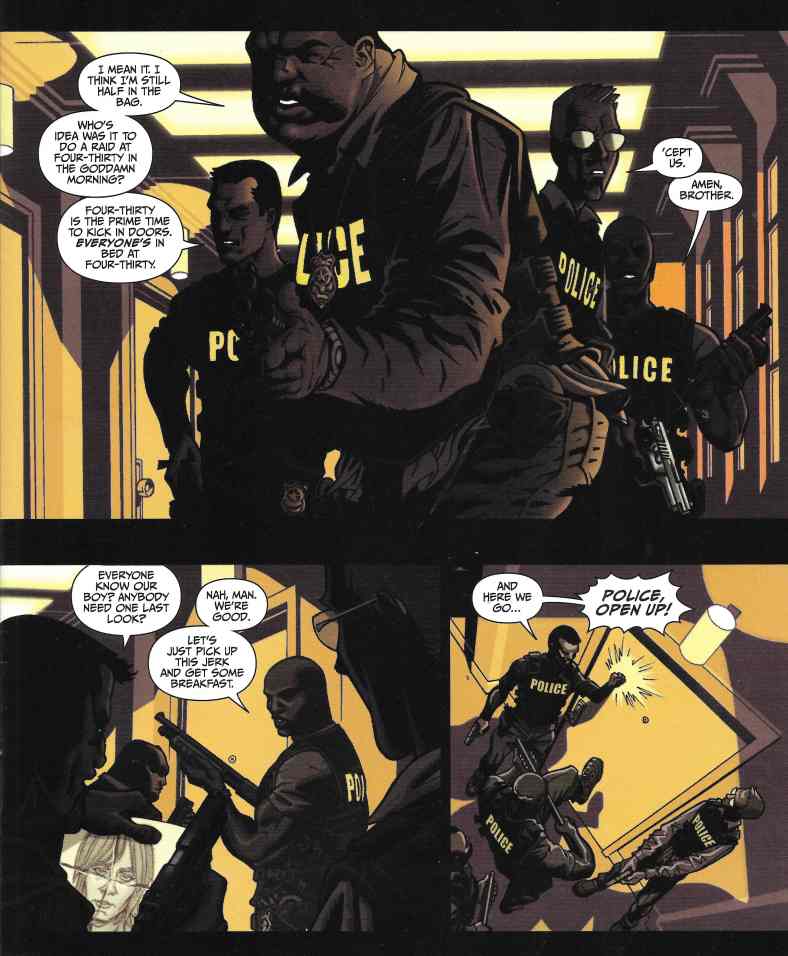 Our four-man team got no answer, so they proceed to knock a little louder…with their boots. 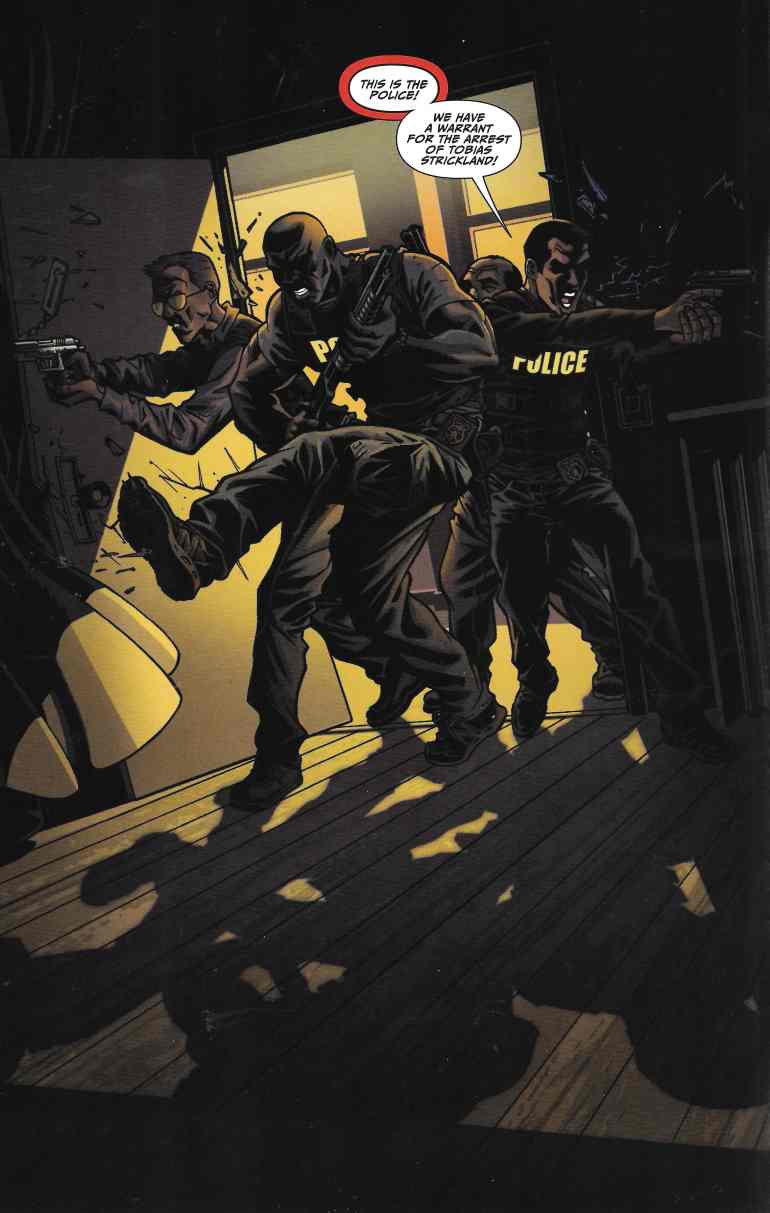 However, their entry tactics did not account for a suspect that can cling to ceilings like some kind of spider-man. 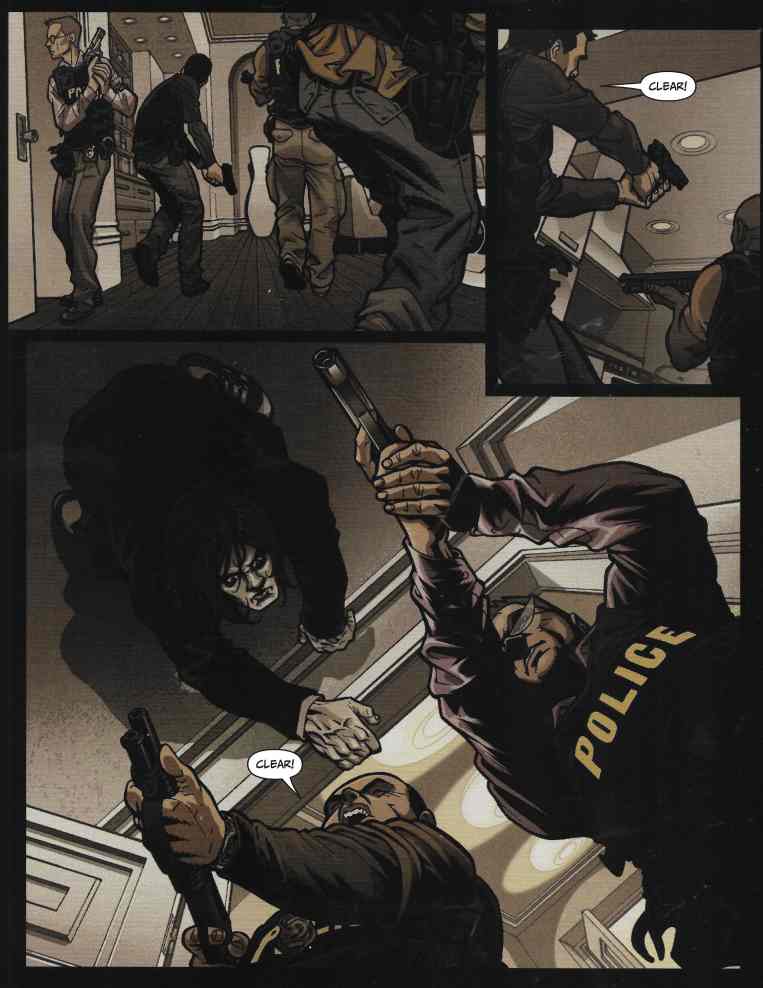 Isn’t Fran’s art marvelous? Don’t you love the subtle capturing of the folds of each shirt and the distinct body postures/facial features. This guy can really draw.

The apartment looks clear and two of the team start looking for clues as to where their perp might be, when suddenly… 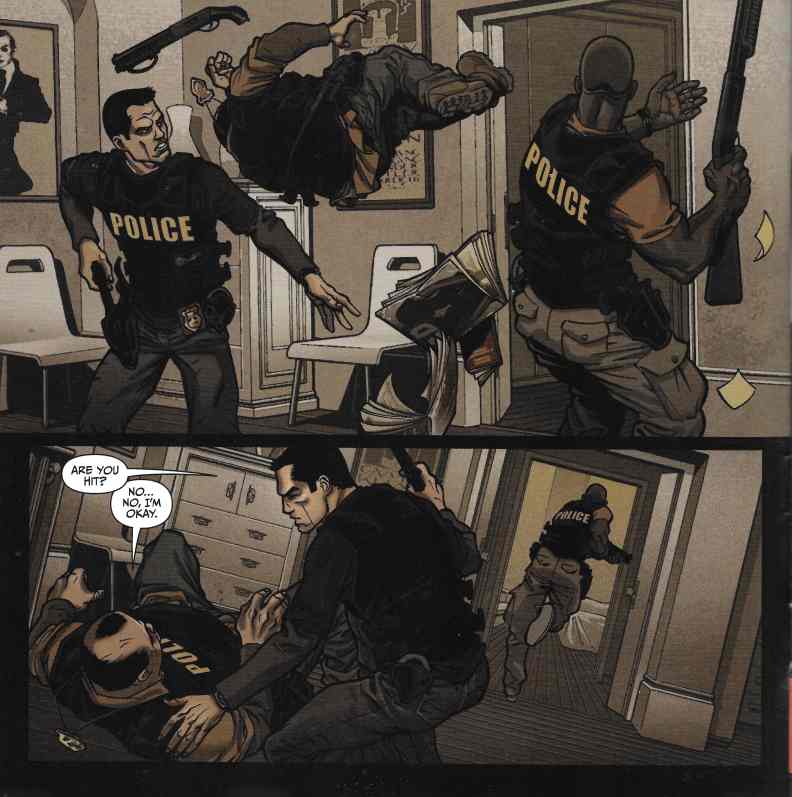 …spider-man decides it is time to leave. No matter how many police officers there are between him and the door. 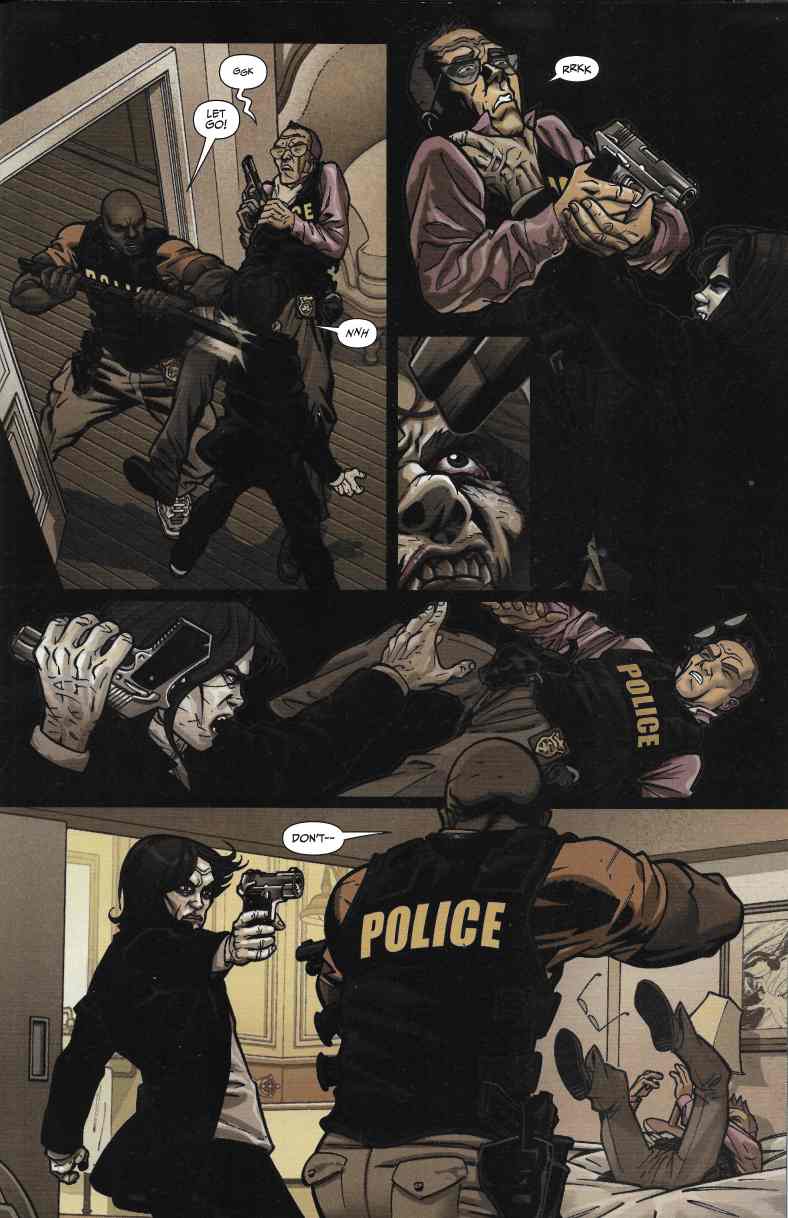 A fight erupts where Tobias, exhibiting supernatural strength, gets one of officer’s guns. He swings it around to aim at the other officer… 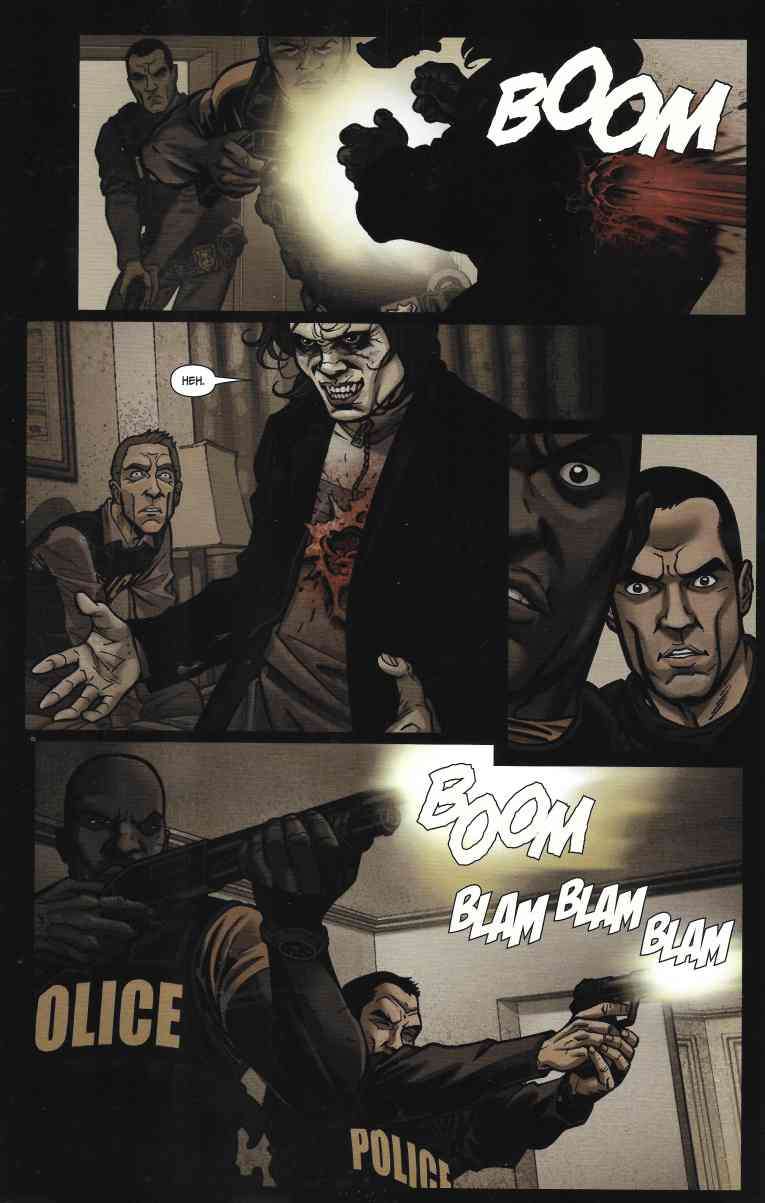 …and that counts as an excuse to use deadly force against him.

When it doesn’t put him down, both officers unload on him. The force of the rounds blow his body out a window and into the river. 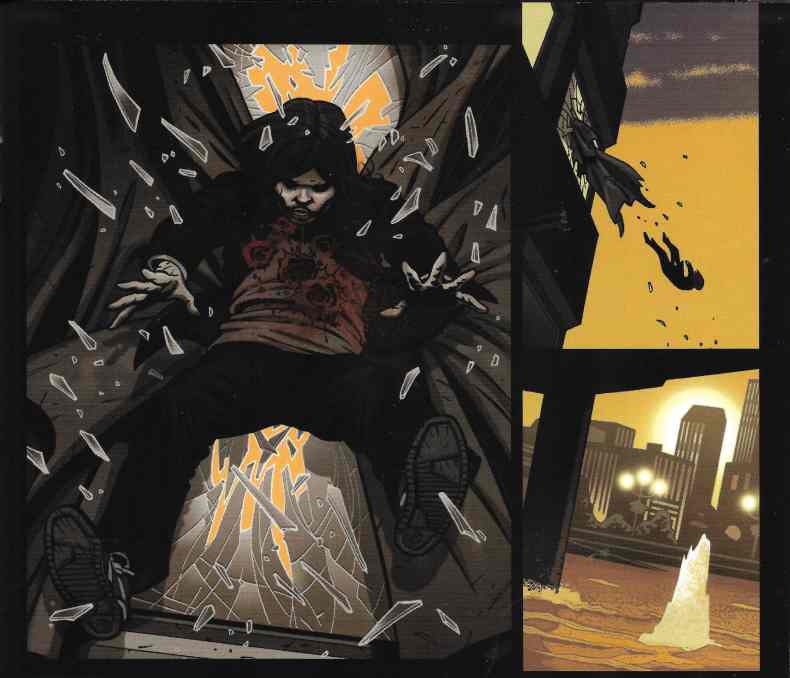 Later that evening, Officer Liam prepares for a romantic dinner of take out Chinese with his girlfriend Hope. Liam was one of our two shooters on the raid. In passing he says they are having no luck dragging the river for the body. It just disappeared. 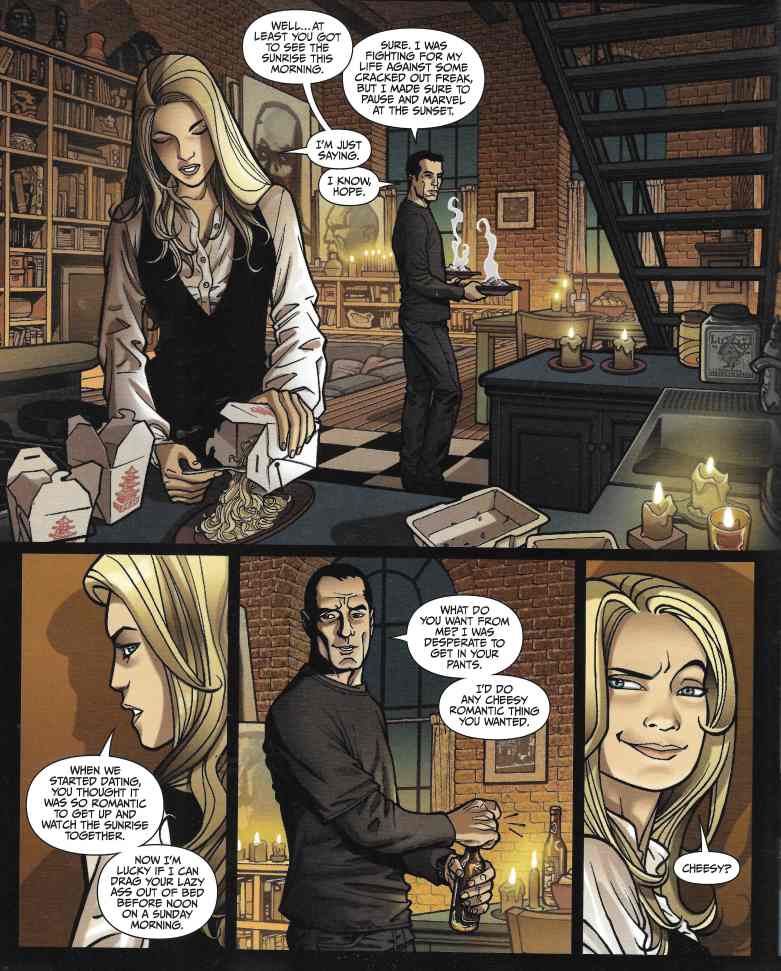 He and Hope make a great couple. I hope nothing bad happens to either of them.

Talk turns to Hope’s gallery opening an the hard time she’s had with the owner wanting to short her on space. Liam offers to help, but Hope shuts him down. Talk turns to Liam’s work schedule and his time off for a fishing excursion with his fellow squadmates. The camera pulls back to display a photo of the four of them out of uniform and in fishing gear. 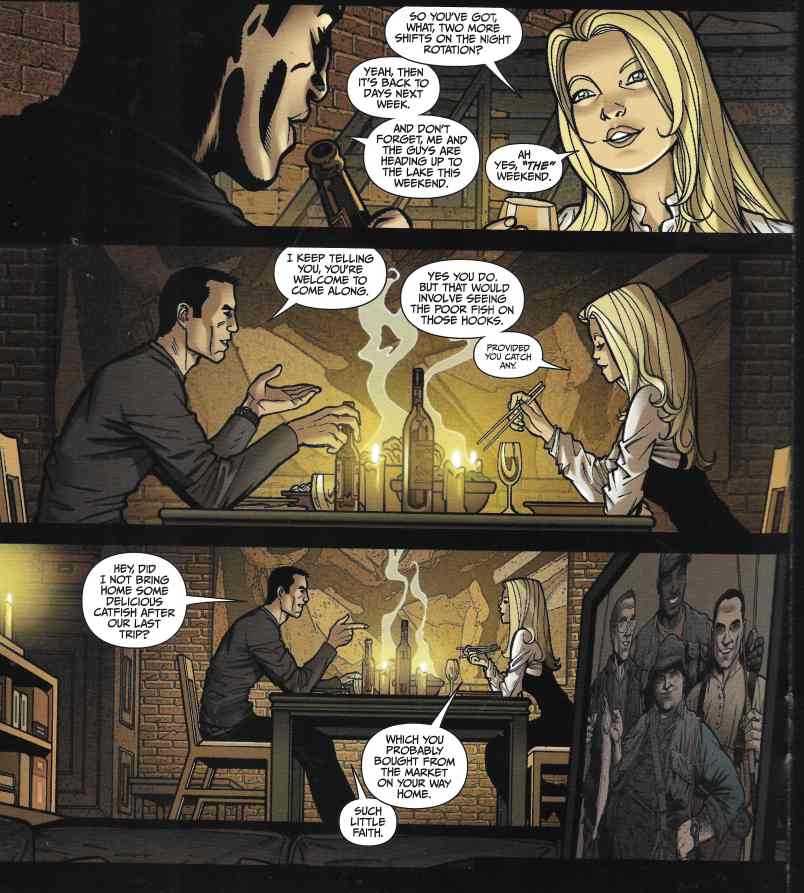 It’s not there by accident. The next page shows each man from the photo has been murdered, the victim of superhuman foul play. Everyone but Liam. And then the doorbell rings. 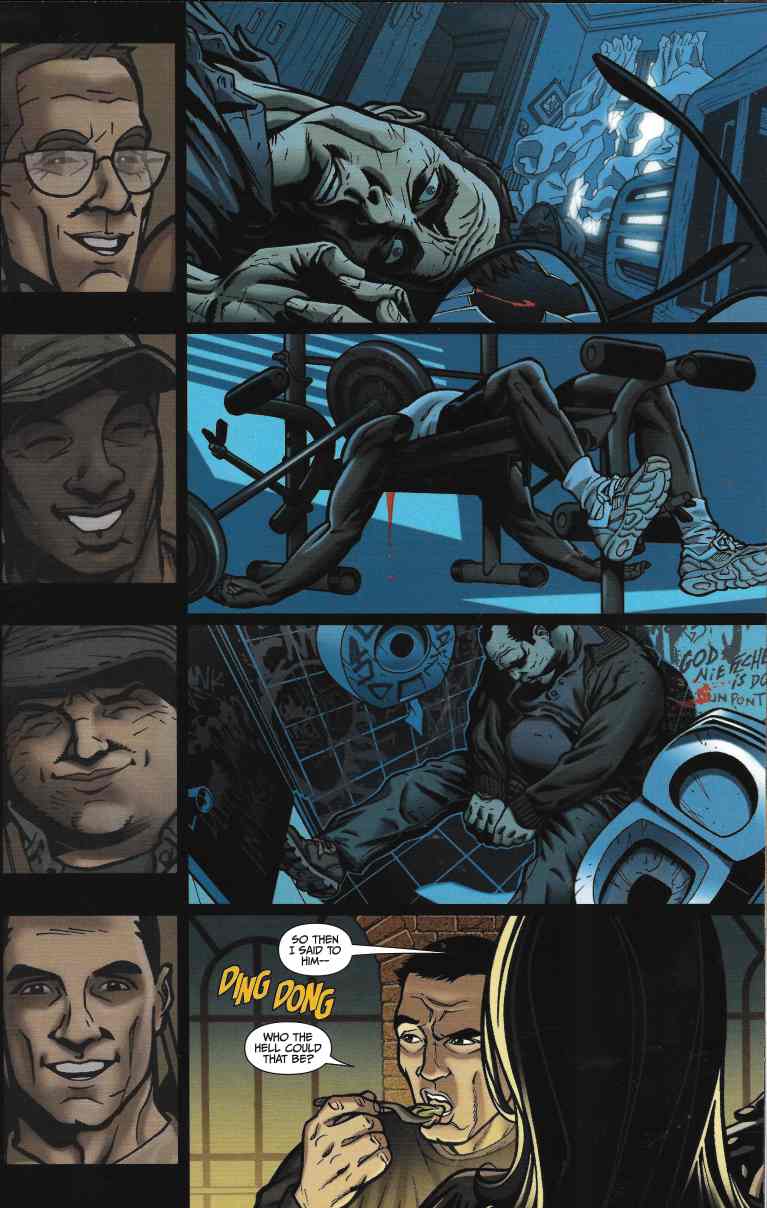 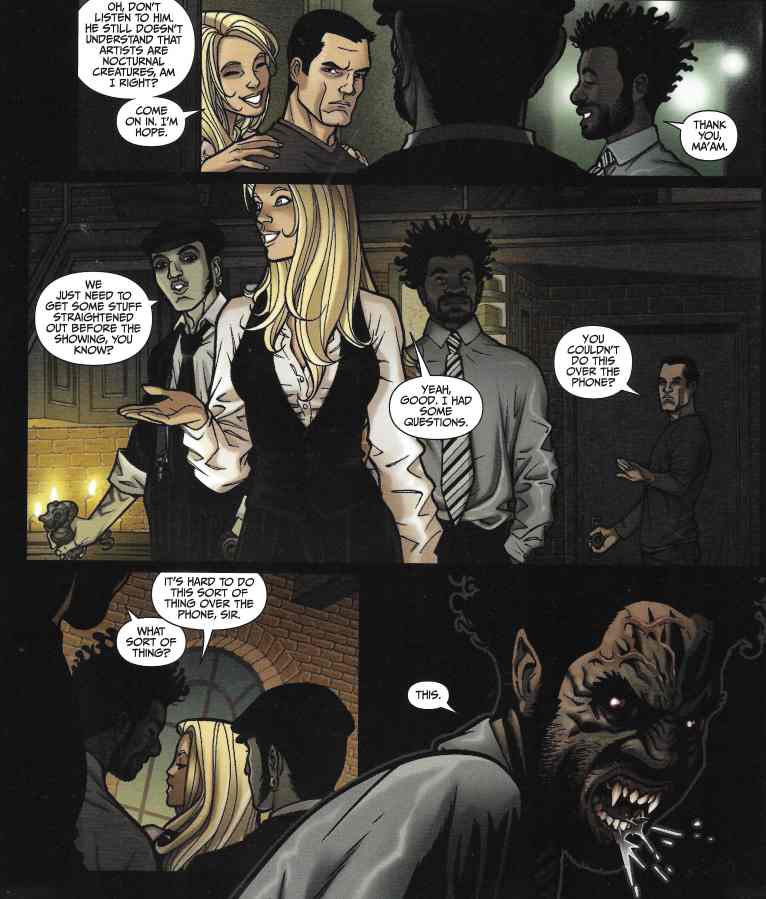 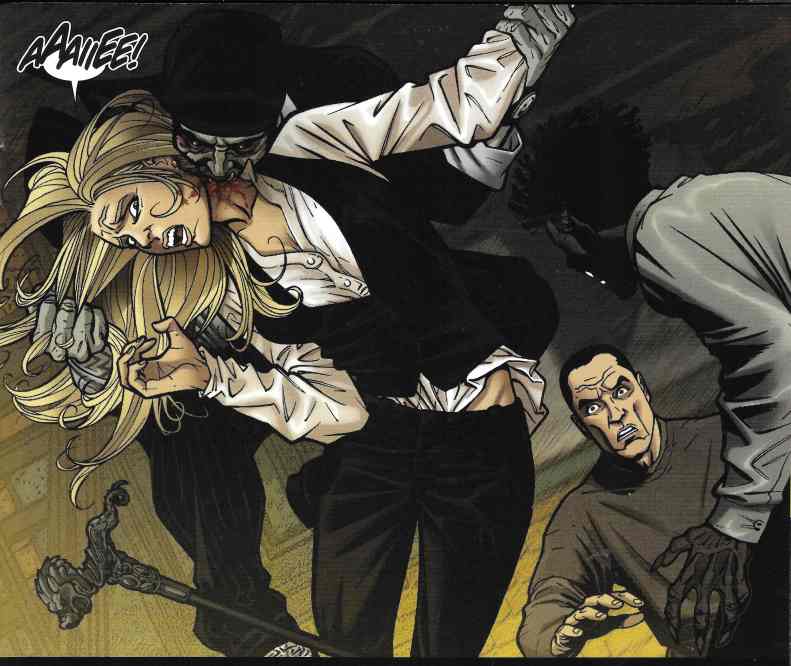 The other tosses Liam around like a rag doll as Hope fades fast. For his trouble, Liam provides the guy with a chopstick through the eye. 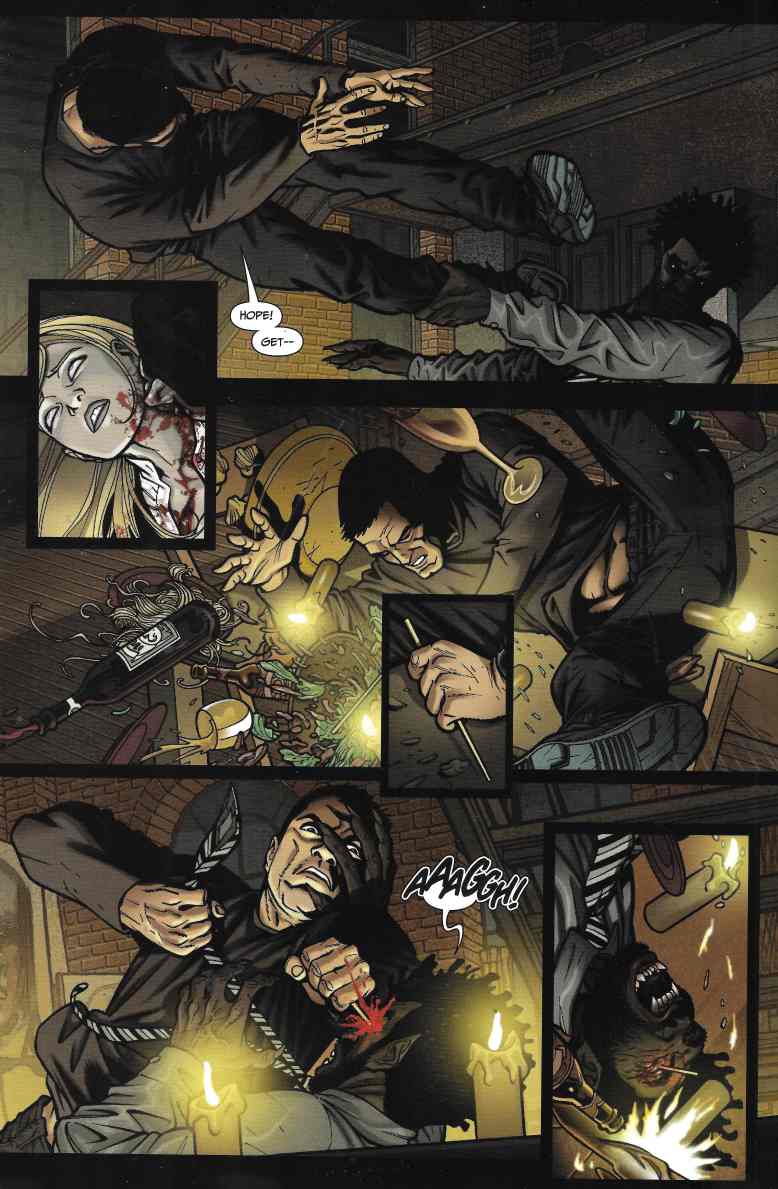 Isn’t Fran incredible? Look at the detail in all this and the way the figures have weight and heft. You can hear this fight by looking at these panels. I LOVE this art.

Back to it, Liam finally gets back to his gun and puts one between the eyes of the vamp draining Hope. It puts him down…for a moment. 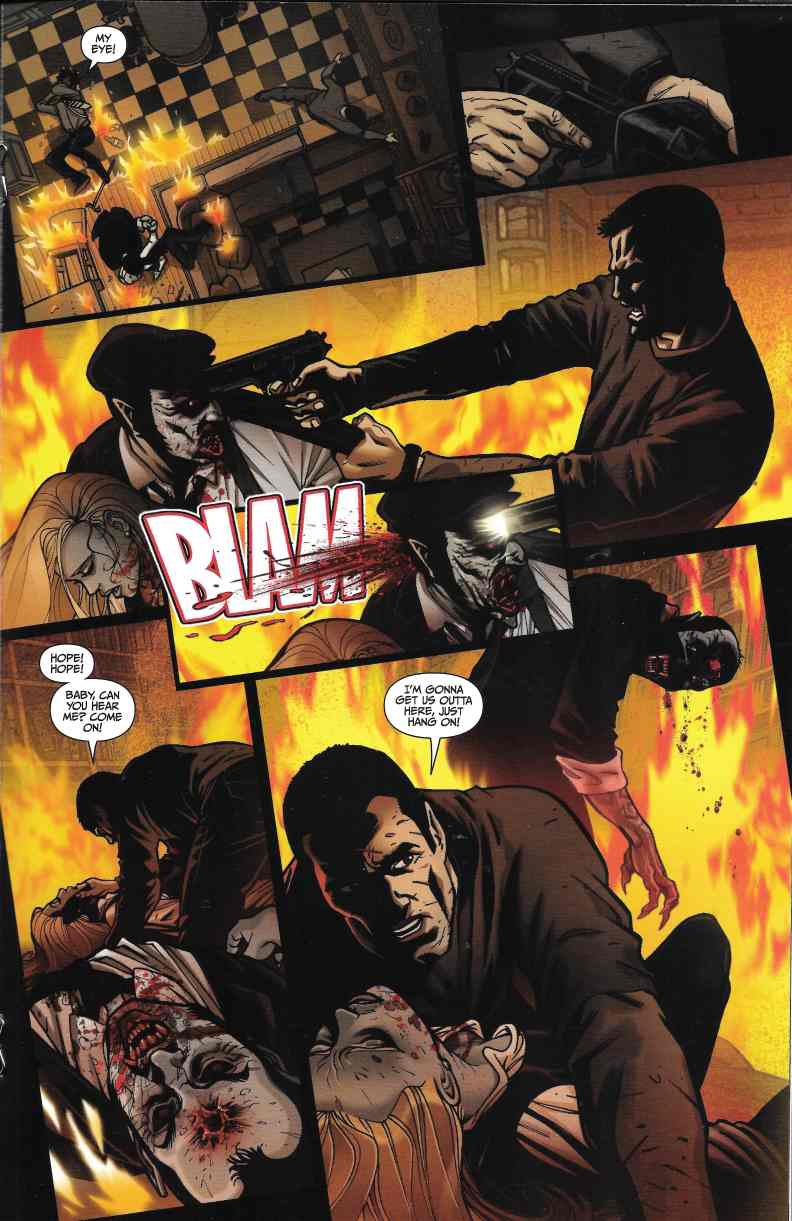 Liam gets tossed across the now burning room for turning his back on an assailant, even one with a bullet in his brain. He lands in the midst of the fire and the vampires scamper off instead of finishing him. 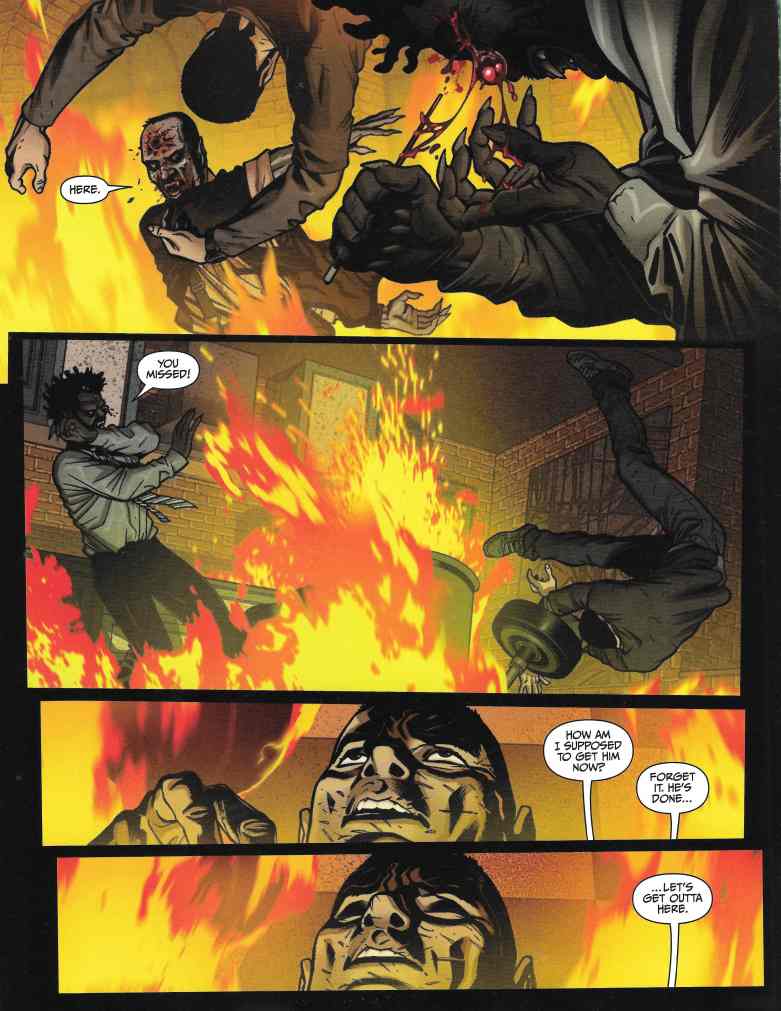 Liam wakes in the hospital, patched up and with tube in every orifice. Seems the fight took a lot out of him. 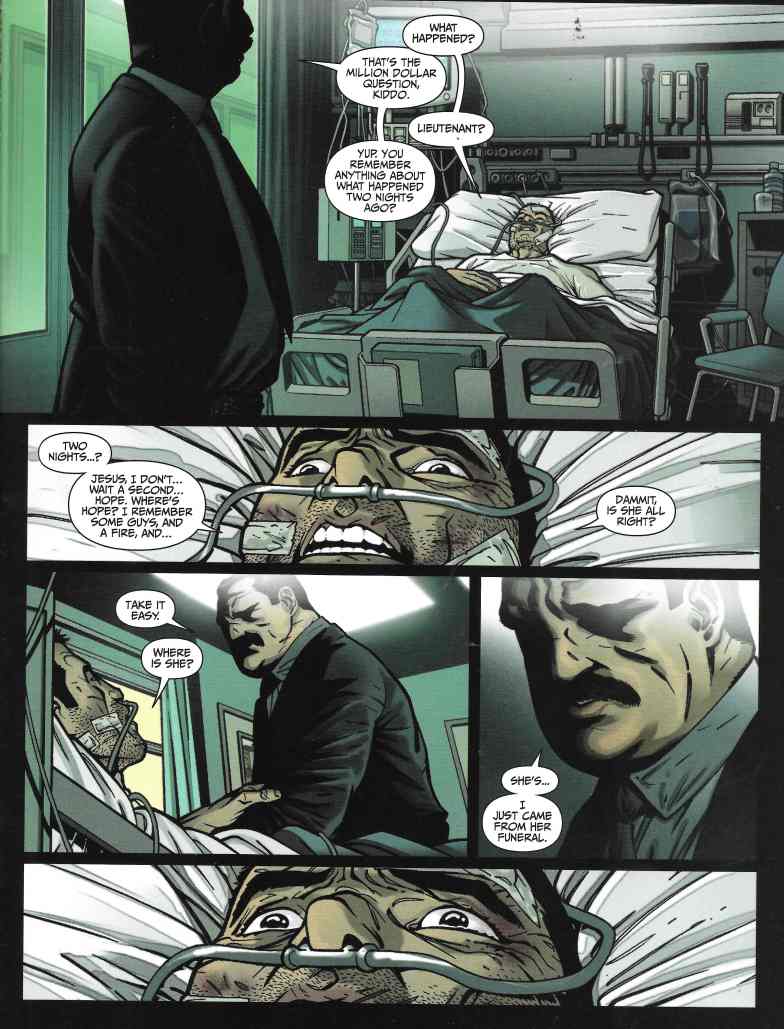 And a lot from him. Hope is dead and he has lost two days recuperating, missing Hope’s funeral entirely.

He is told the news about his squadmates and he takes none of it easily. Liam releases himself from the hospital against the wishes of his lieutenant 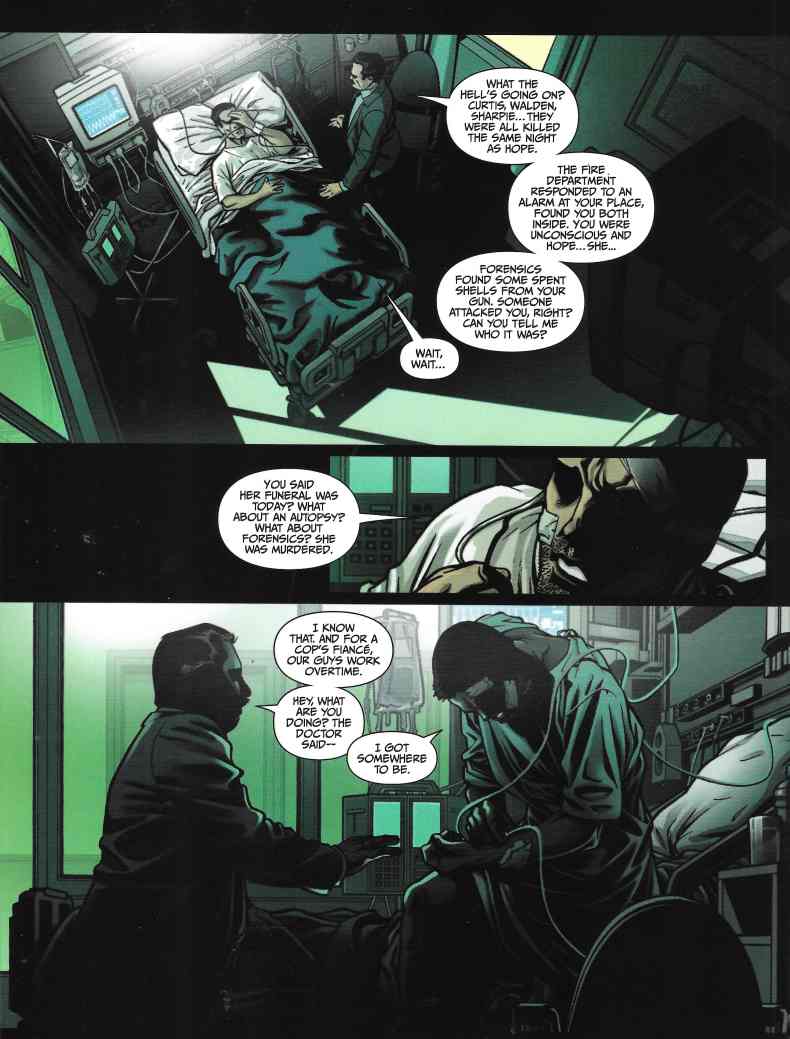 We catch up with him drowning his sorrows and falling over into the disturbed mess that is Hope’s gravesite. 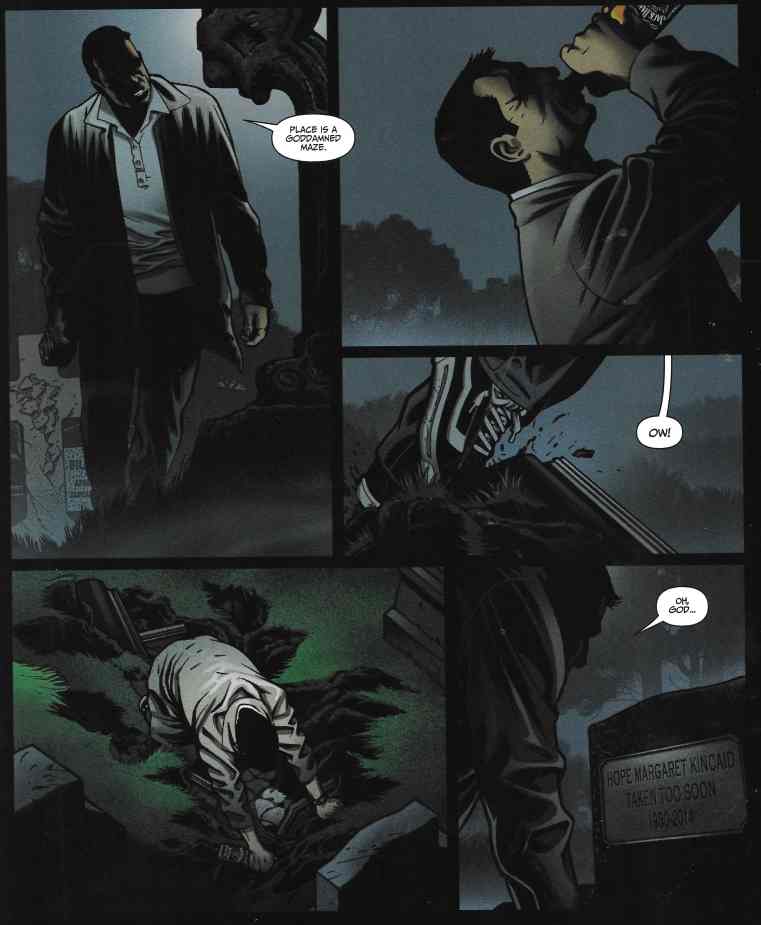 And then a disturbing miracle happens. 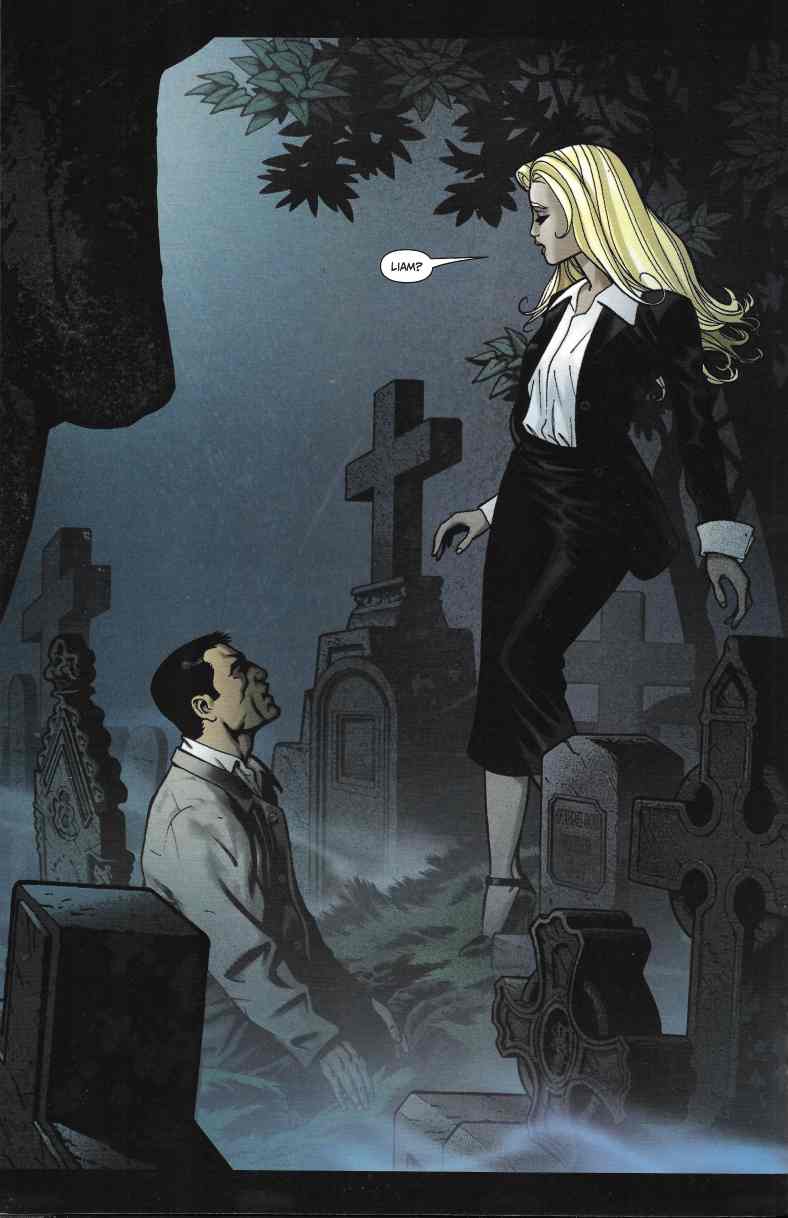 (that image is almost worth framing)

Hope is back! Alive! Well, maybe not technically alive. And she’s brought a few new friends… 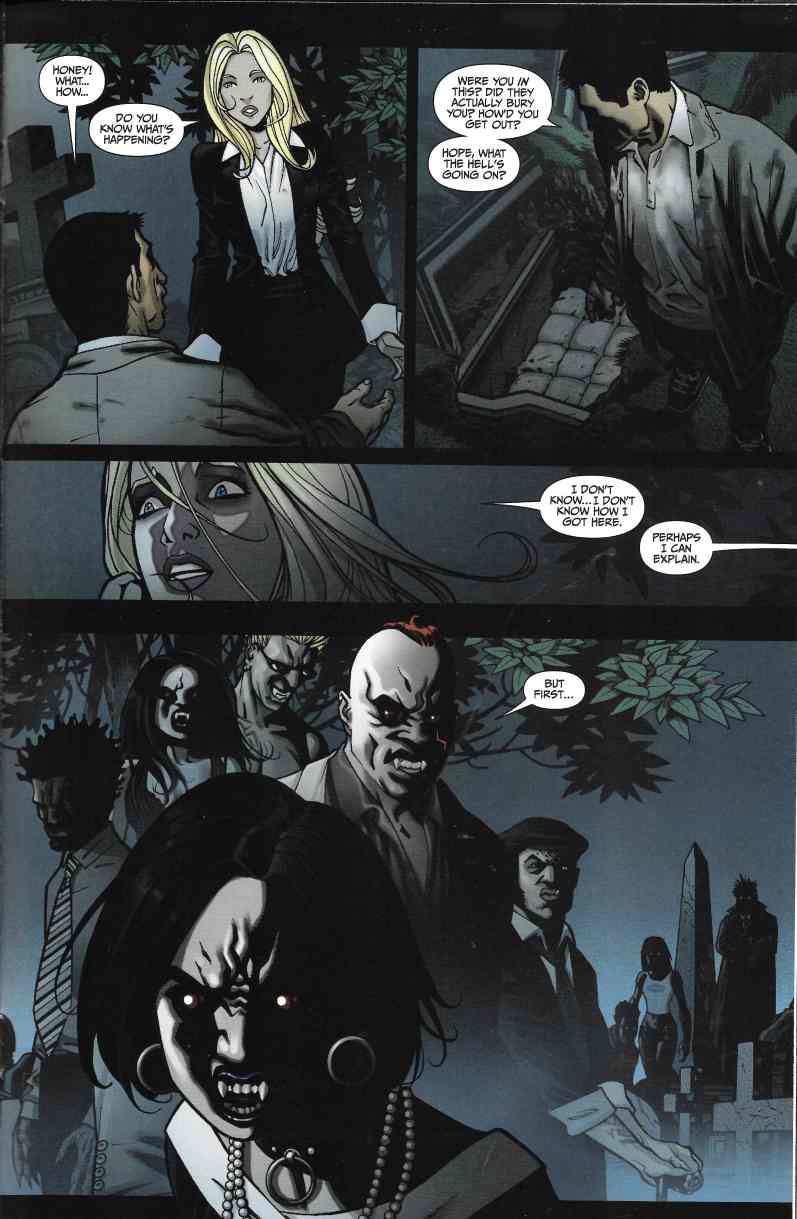 …and these new friends are going to mean trouble for Liam and Hope’s relationship. 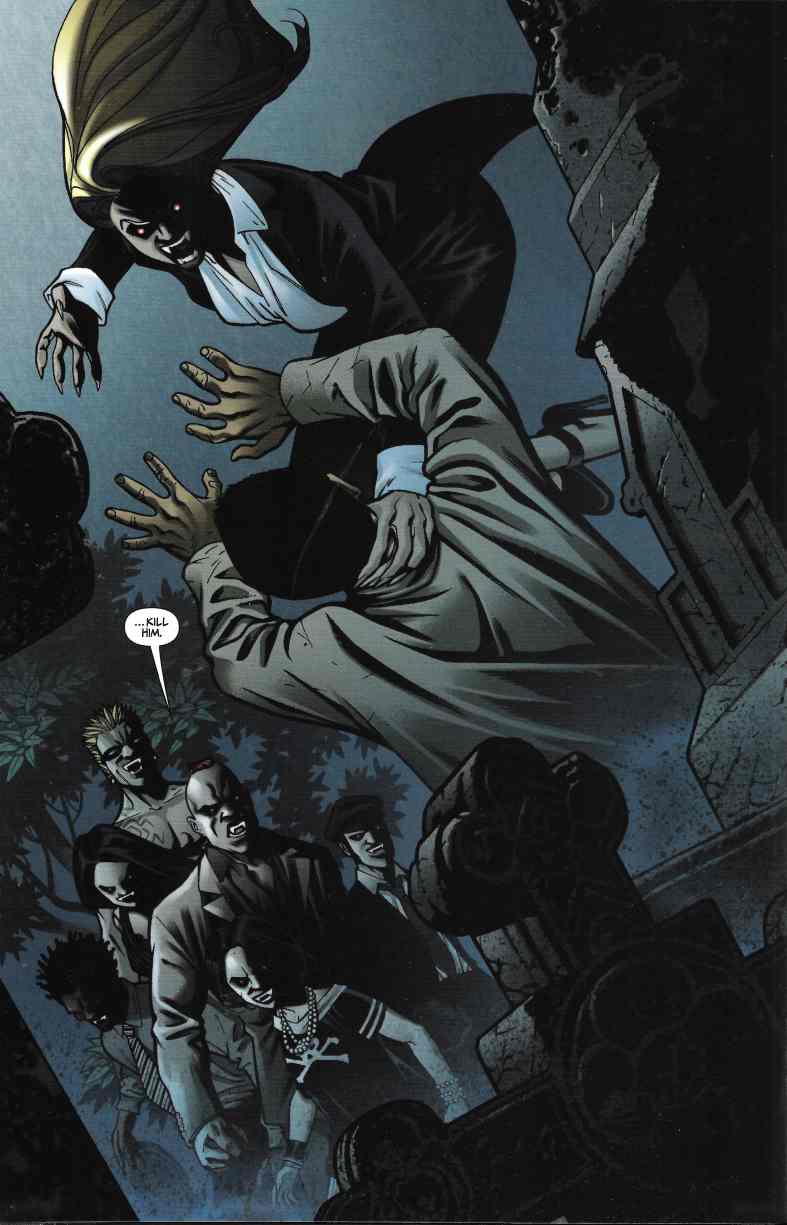 Short. Sweet. To the point. This series action driven plot is the key and at only four issues, the mini should be easy to find or cheap in trade format. What you get for that is art that was labored over between projects that looks incredible and Faerber’s easy to follow plot. I would buy more of these, if I find them and I’ll definitely be looking.
Posted by SonOfCthulhu at 2:24 AM