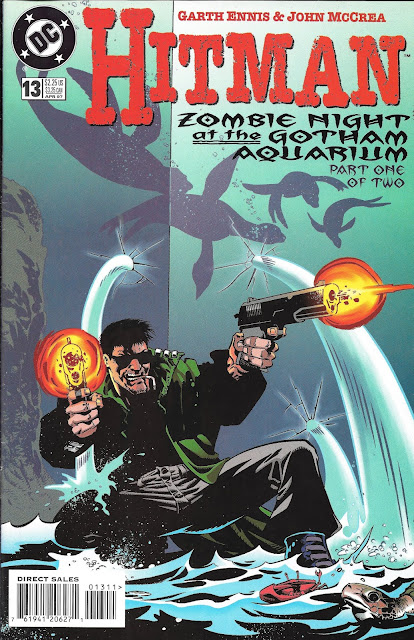 Tommy and friends play with the ocean animals

Tommy Monaghan was an unlikely hero and also an unlikely success story. Created by writer Ennis and artist McCrea for the Bloodlines Annual of The Demon, Monaghan wasn’t the only hero who rated his own title. However, his was the only title that lasted longer than a year finishing up at a staggering 61 issues.

Monaghan rarely uses the Hitman moniker. His special power granted by the Bloodlines parasite gave him limited x-ray vision and moderate telepathy. I’ve read numerous Hitman books and to be honest, I don’t recall him using his powers. His main powers that I could see, seemed to be his cold, cynical intellect and guns.

Lots and lots of guns.

I’d love for another Marvel/DC crossover, just to see if Frank and Tommy could meet for once. The amount of destruction would be epic!

Anyway, Tommy users his “gifts”, both natural and Bloodlines crossover ascribed, to promote his business, which is literally that of a hired killer who typically only kills bad guys. It is interesting that Ennis got 61 issues out of this, given that it is hard to write the whore with a heart of gold indefinitely.

I will say that I’ve never been disappointed in a Hitman tale. They tend to mix humor and action in a uniquely Ennis way, which may be to say Irish, but I wouldn’t know. What I do know is they are enjoyable and this two-parter is no exception.

Since the setting of most of the story will be the Gotham Aquarium, I’m sure you won’t mind if we dive right into this… 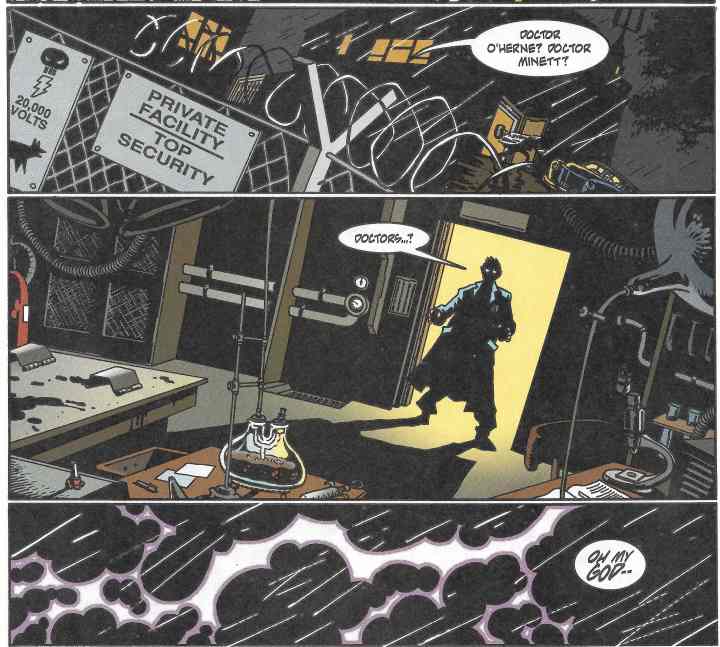 And we begin the night of a horrible storm at the local mad scientist laboratory. Something’s amiss as one of the researchers returns… 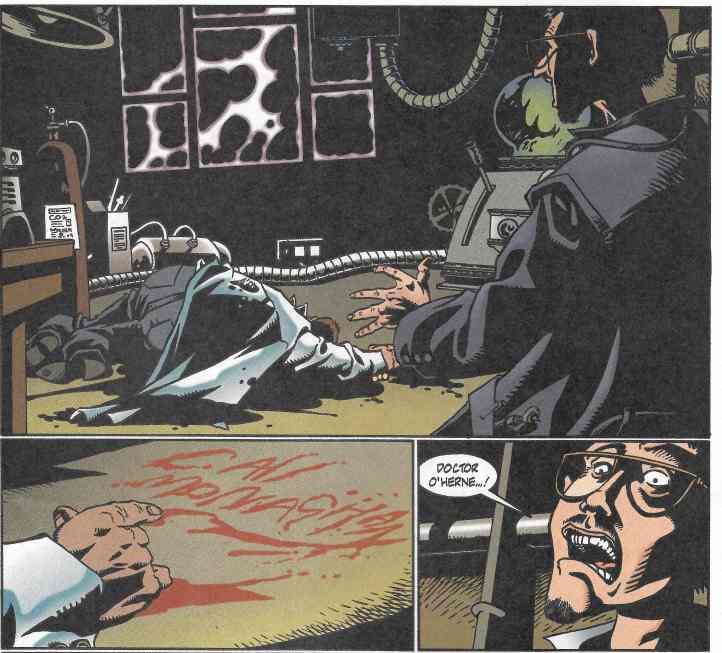 He finds his coworker dead in a pool of his own blood, his hand scrawling out the message “Call Monaghan.” Meanwhile a loaded car speeds away from Injun Peak Research Facility carrying our murderer and something he will use for a nefarious purpose.

Next morning finds Tommy Monaghan, a/k/a Hitman, making a completely different kind of hit. The pitcher here is Ringo Chen, another murderer for hire who has a friendly business rivalry with Tommy. And a mean curve ball. Too bad Tommy connected. 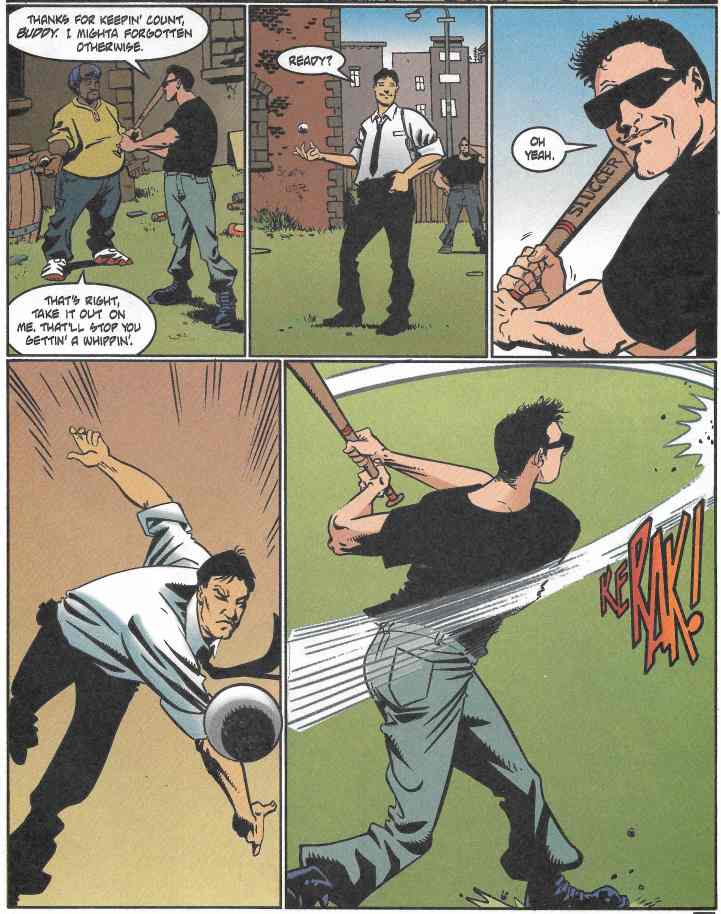 But that might not be a lucky thing as paid muscle and all-around lunkhead Hacken appears to be right under the ball. Tommy looks to get ribbed for this for quite some time. 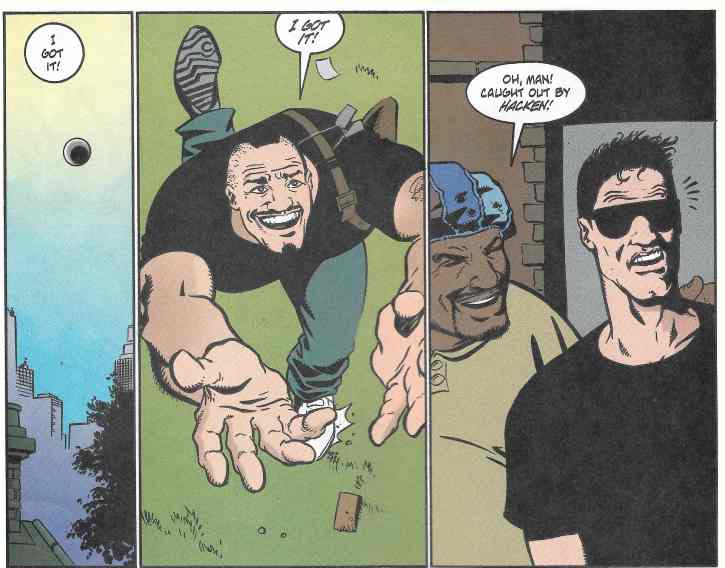 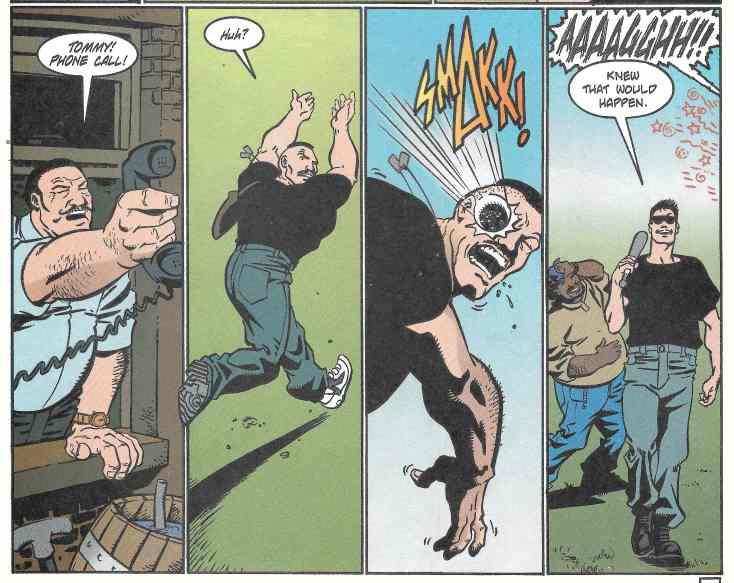 Tommy takes the call and we only see his side of the conversation. The game breaks up with the players leaving except for Tommy and his ever-present partner Natt the Hat. It appears they have a business opportunity on the hook for this evening. 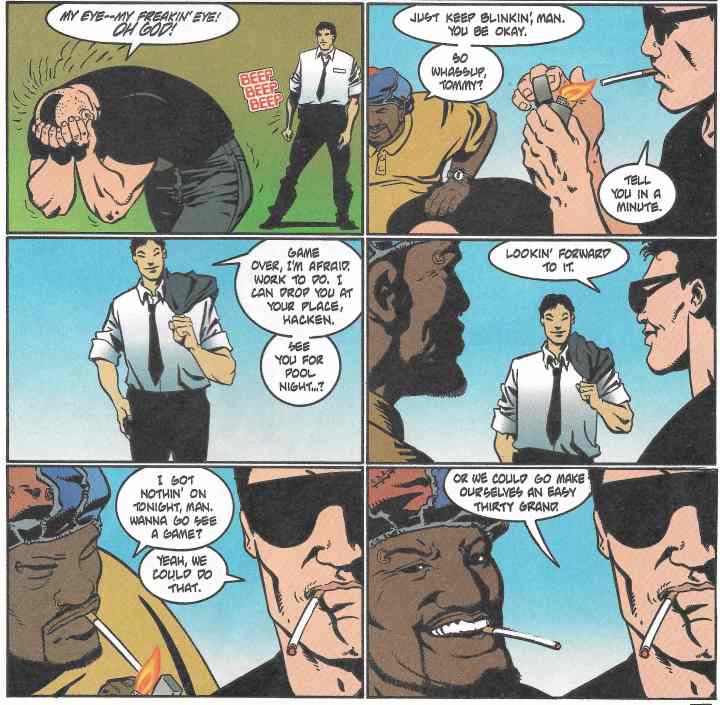 Which leads us to Noonans, the bar where most of Tommy’s business is conducted. We are introduced to Dr. Jackson, the research scientist who happened upon the dead body of the other doctor earlier in the book. Here I’ll let him tell it after Tommy shows the bar is safe to have the discussion in. 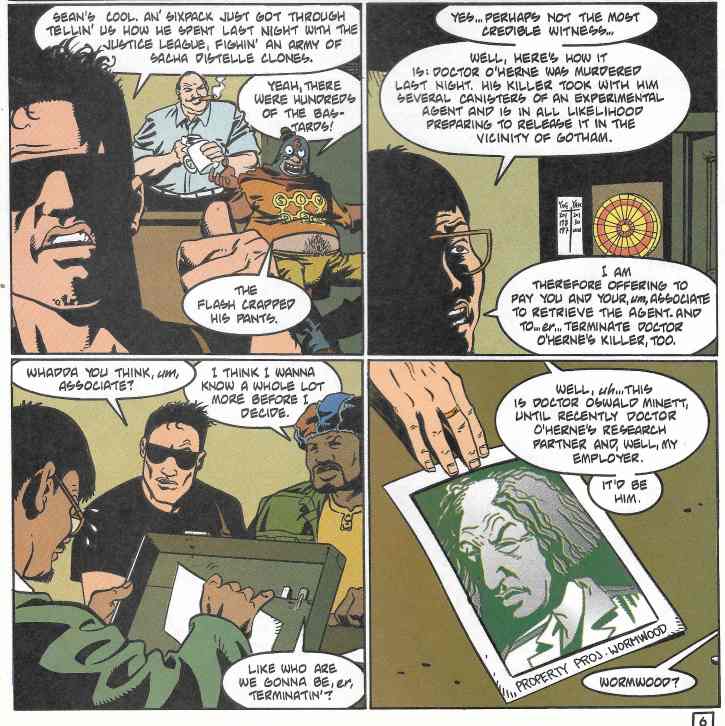 Anyway Dr. Jackson has a credible threat: a mad scientist on the loose with some kind of experimental nerve gas!

Tommy gets Dr. Jackson to explain what Project Wormwood was working on and it is some twisted Herbert West type stuff they were developing for the US Miliatary. The gas brought fresh, whole corpses back to life. The only issue was that the corpses couldn’t be controlled and tended to try tearing anyone within range apart. 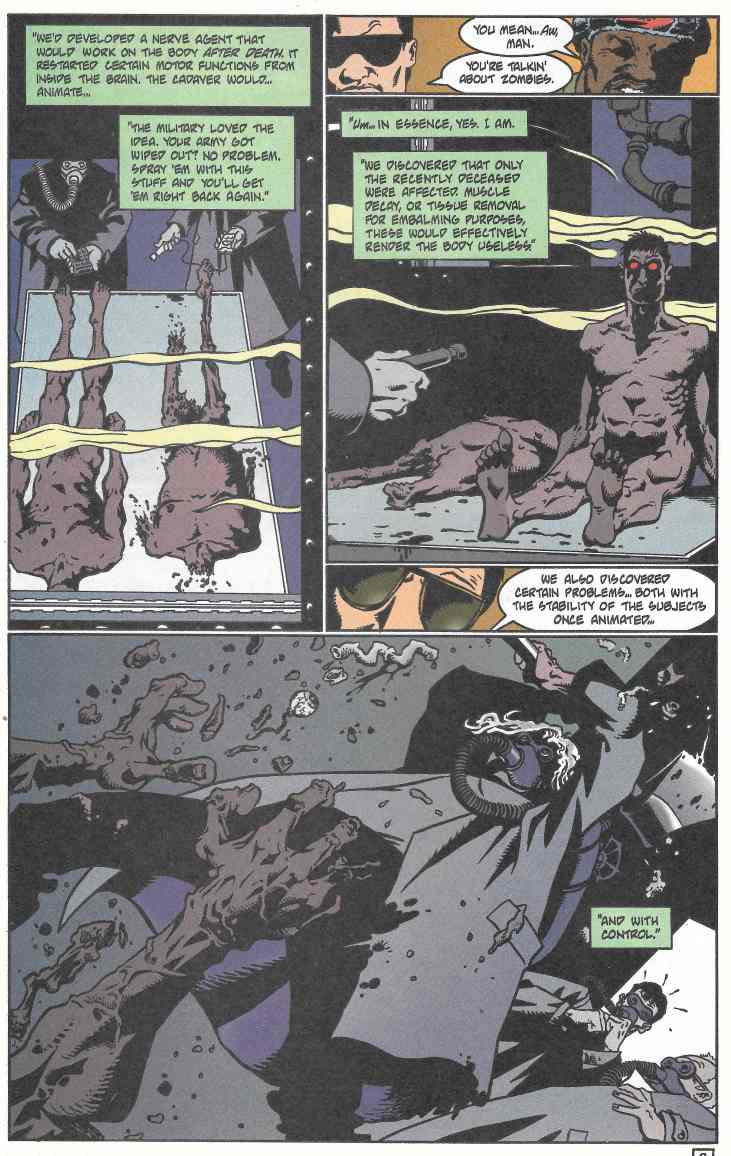 Thus their funding got cut. The Army didn’t want uncontrollable troops, especially ones that went crazy for flesh. Doctor Minett took matters into his own hands after that, killing the other research scientist and stealing all the nerve gas. Jackson reports he’d been muttering about taking the gas out of the lab and giving the military a true test of what the gas could do. 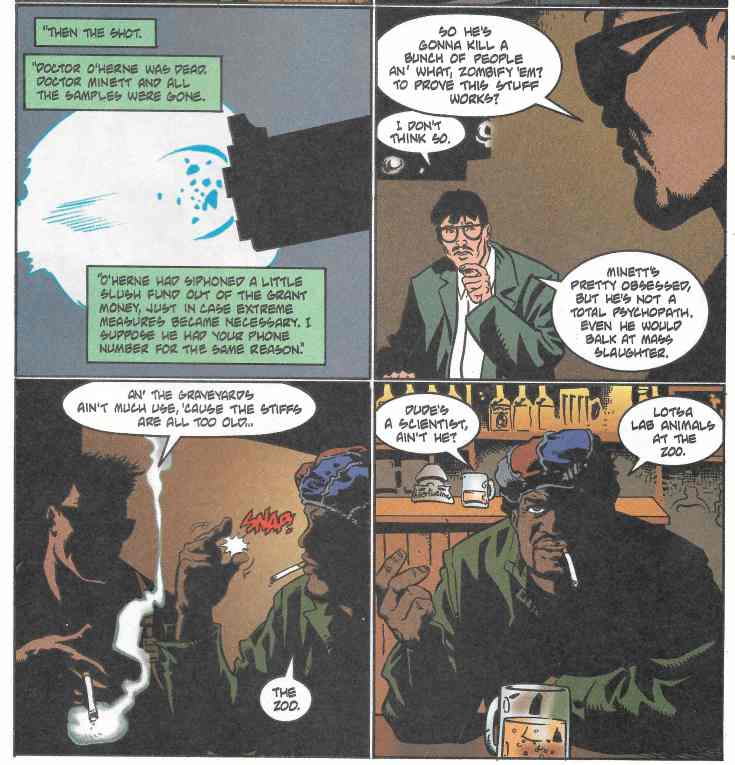 Natt’s on the right track here. Tommy takes the case, in his own inimitable style… 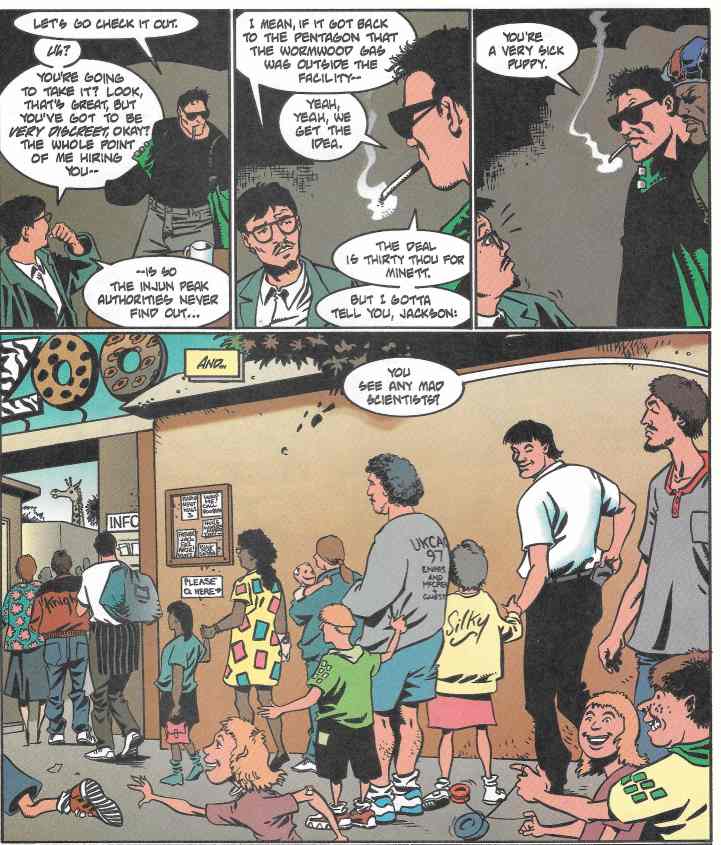 …and then we are off to the zoo for a fun filled day of…staking the place out. The pair discuss Tommy’s friendly rivalry with Ringo for a bit, how the pair always seems to be sizing the other up in case they got cause to take them out. During this exchange, a light bulb goes off in Tommy’s head. 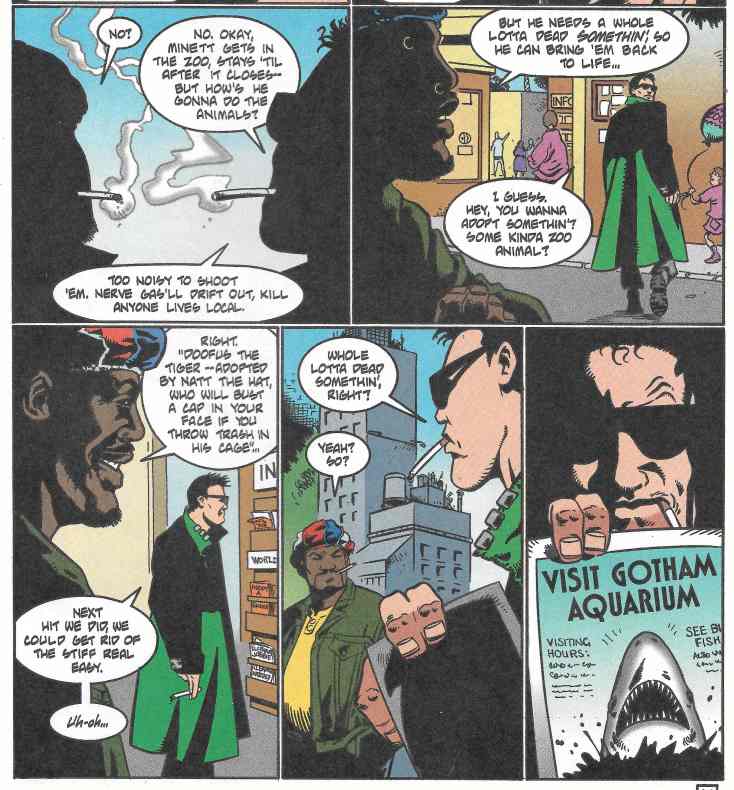 Next thing you know, it’s night and we find ourselves following this security guard around the Gotham Aquarium as he makes a startling discovery. 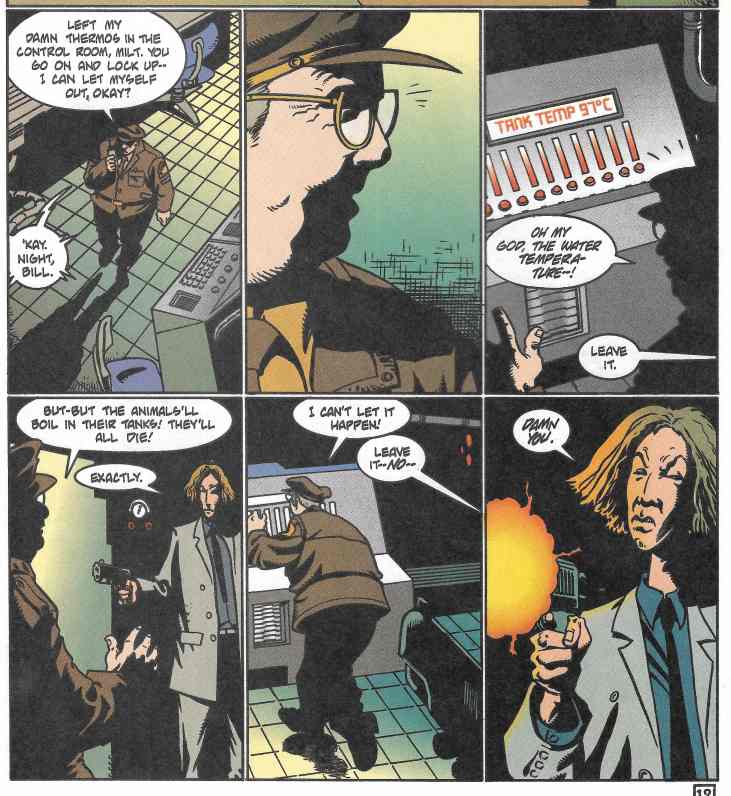 Just so you know Minett IS a bit of a psycho, that makes his body count now two people. And soon to be a BUNCH OF BOILED ANIMALS…

Tommy and Natt are just sneaking into the place, having had some difficulties scaling the fence. Natt has some questions about how Tommy’s name was known at the research facility, and the answer to that is pure gold. 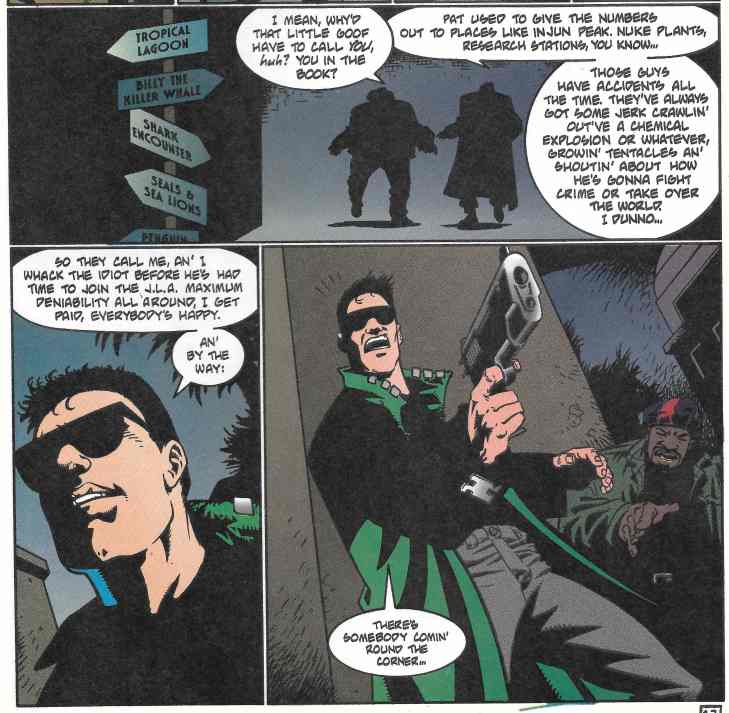 However, while Tommy starts using stealth, it’s too late for the animals. They are already floating at the top of their tanks…at least until the gas kicks in and turns them into crazed bloodthirsty undead killing machines. 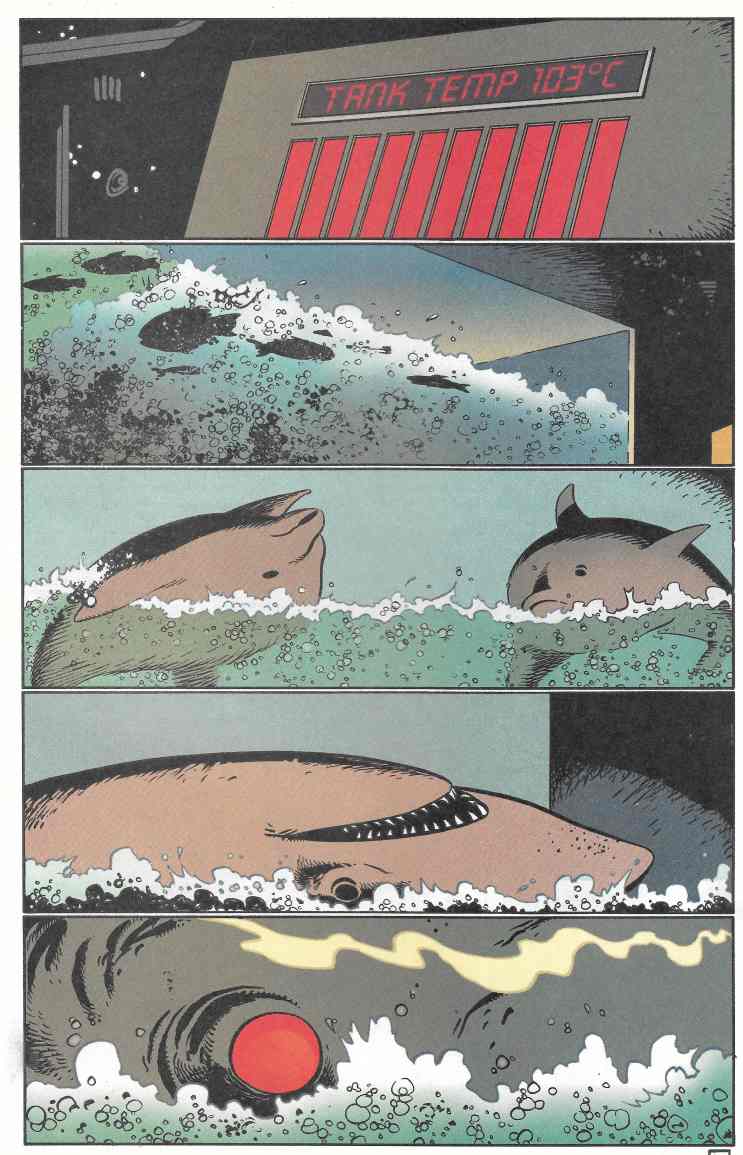 As for who Tommy is drawing down on? Why it happens to be Ringo, here to wack Minett for a different interested party. This exchange would be a lot less tense if they weren’t pointing guns at each other. 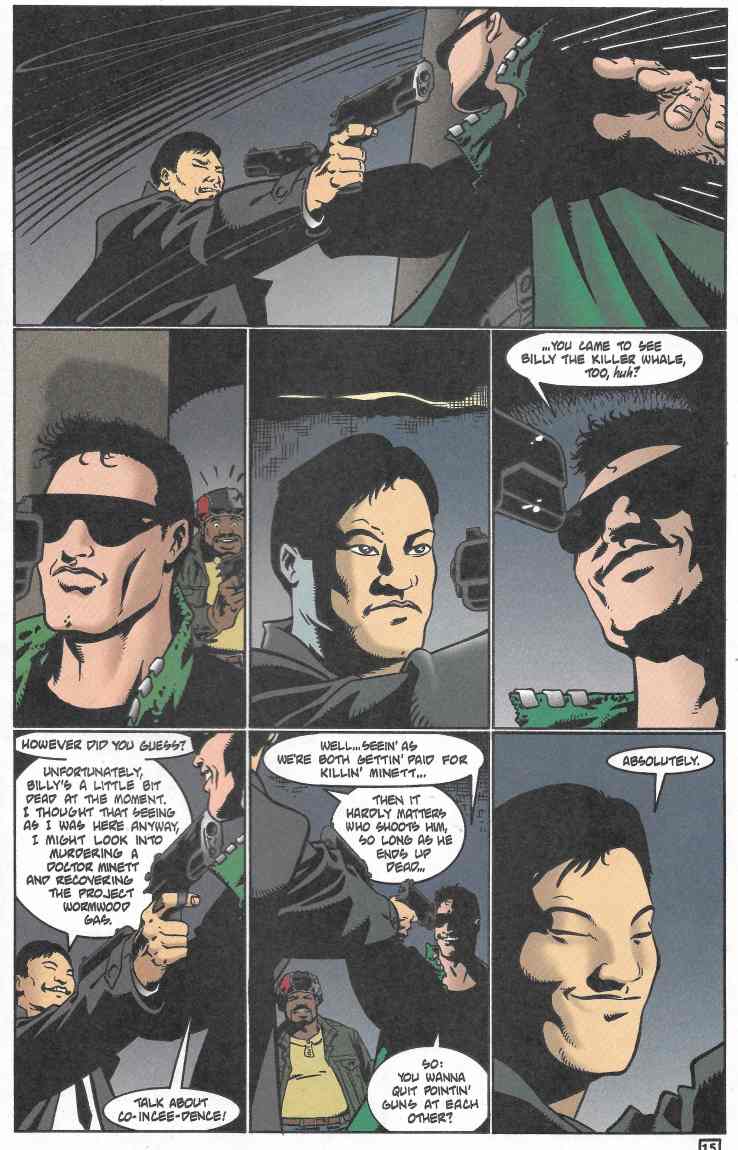 Appears Ringo is in the employ of the Injun Peak Facility directors, who weren’t so clueless as to what was going on as the scientists believed. Ringo is also going to make a bigger bank that our two principals. But back to something Ringo said about animal deaths... 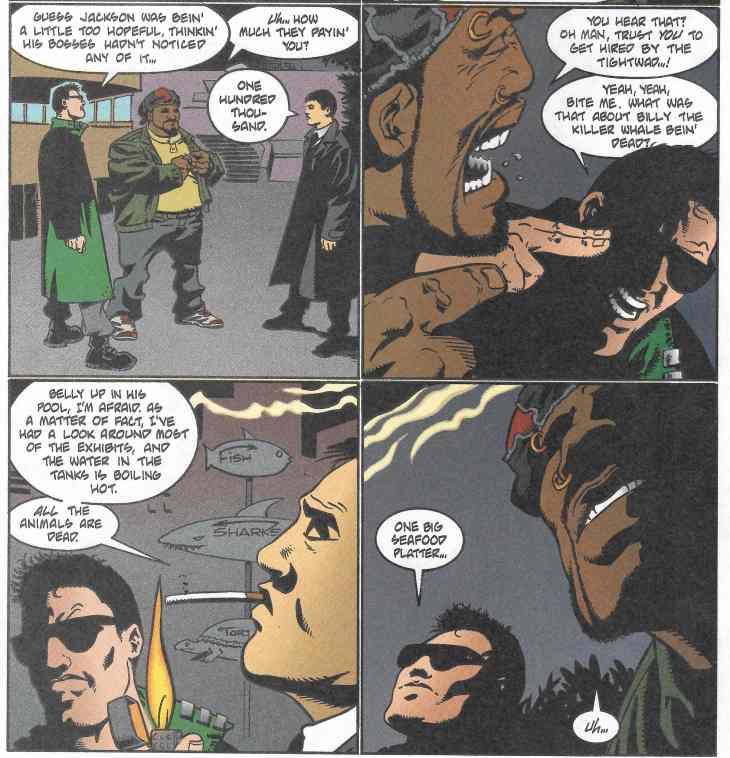 Wait! If ALL the animals were dead and Minett has deployed his gas, wouldn’t that mean they were all in imminent danger of attack? 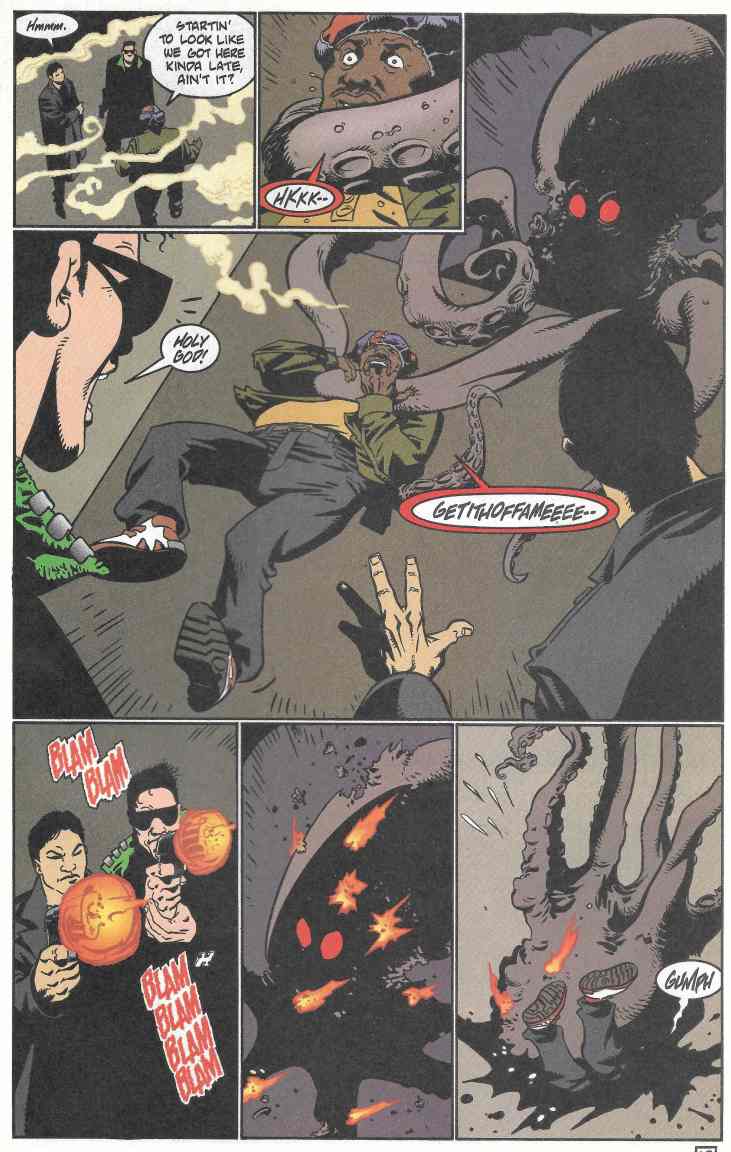 As is this bit, where the boys are unsure if they have killed the thing’s brain yet. 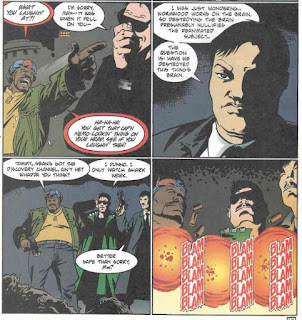 Feeling that it is wiser to retreat to a place of relative safety and think this new wrinkle through, the trio finds a place to hole up and discuss how they get to Minett with the added complication of zombified marine life. Things are about to get even MORE complicated, however… 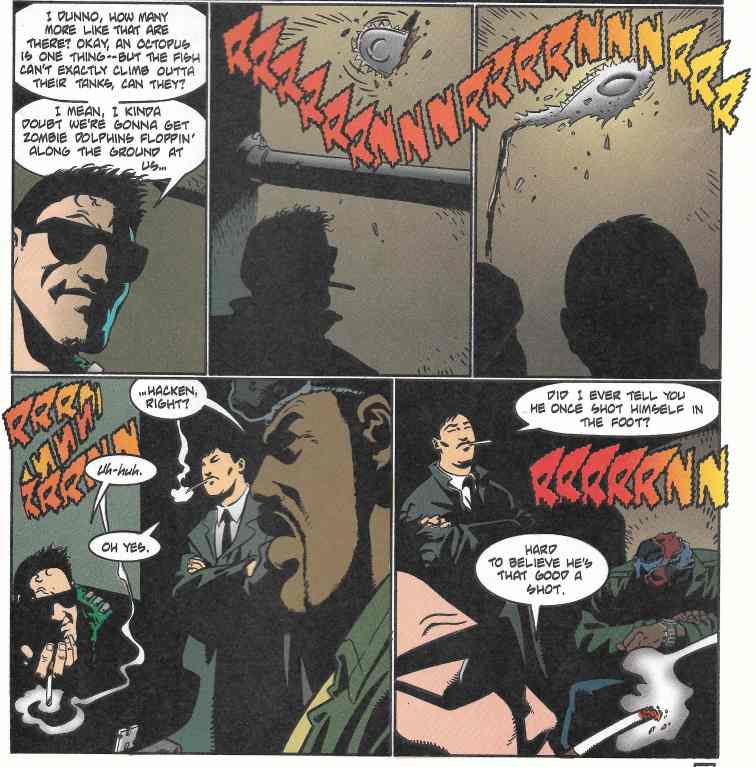 Yes, screw-up extraordinaire Hacken arrives by cutting his way in with a chainsaw. He doesn’t have anyone paying him, he just noticed Ringo getting a call and thought he would follow him to see if it lead to a paying gig. 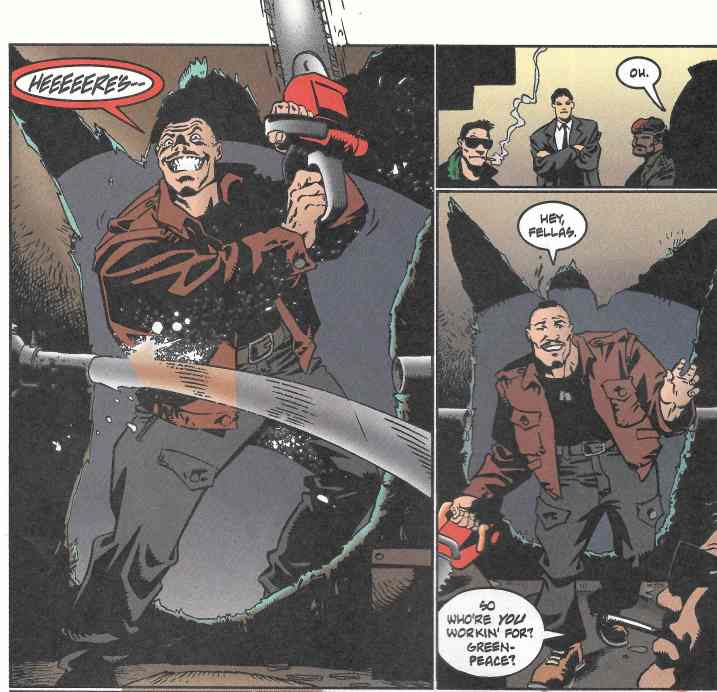 Which is clearly won’t, but I love Tommy’s description of their job: 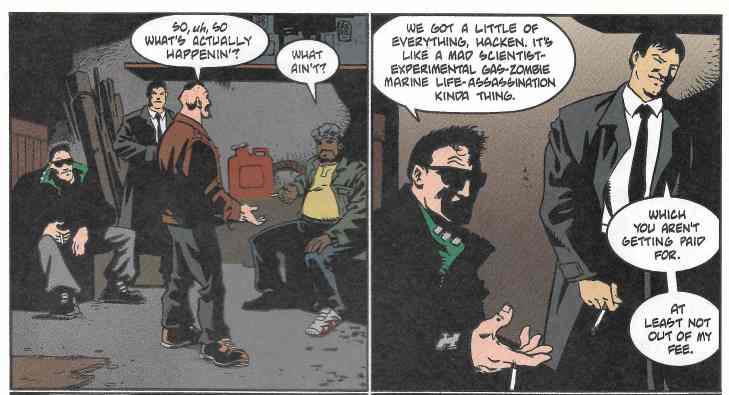 And his berating of Hacken for not using the door like a normal biped. Which leads to Tommy opening it for effect only to be stunned into silence… 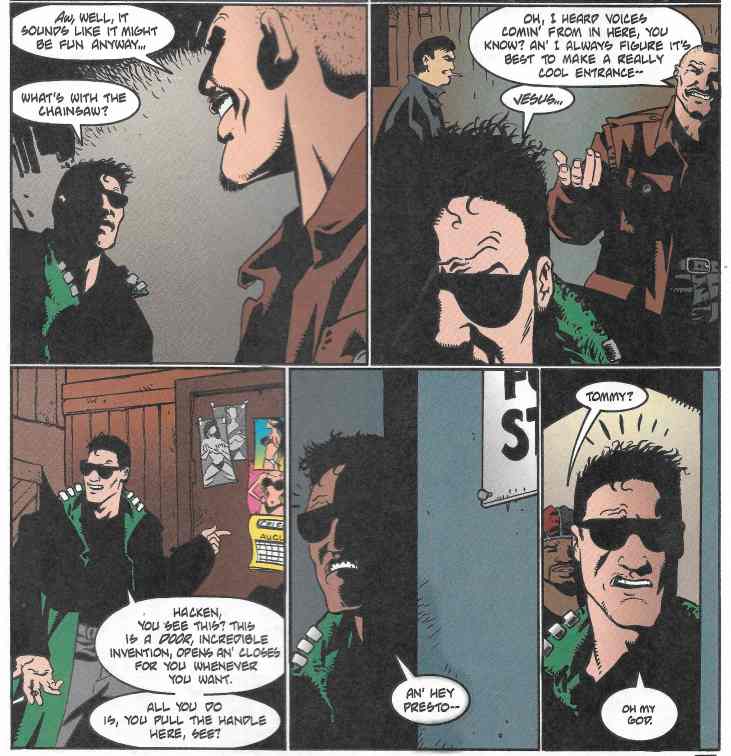 …because the mad doctor’s experiment is clearly going to take a LOT of ammo to cure. 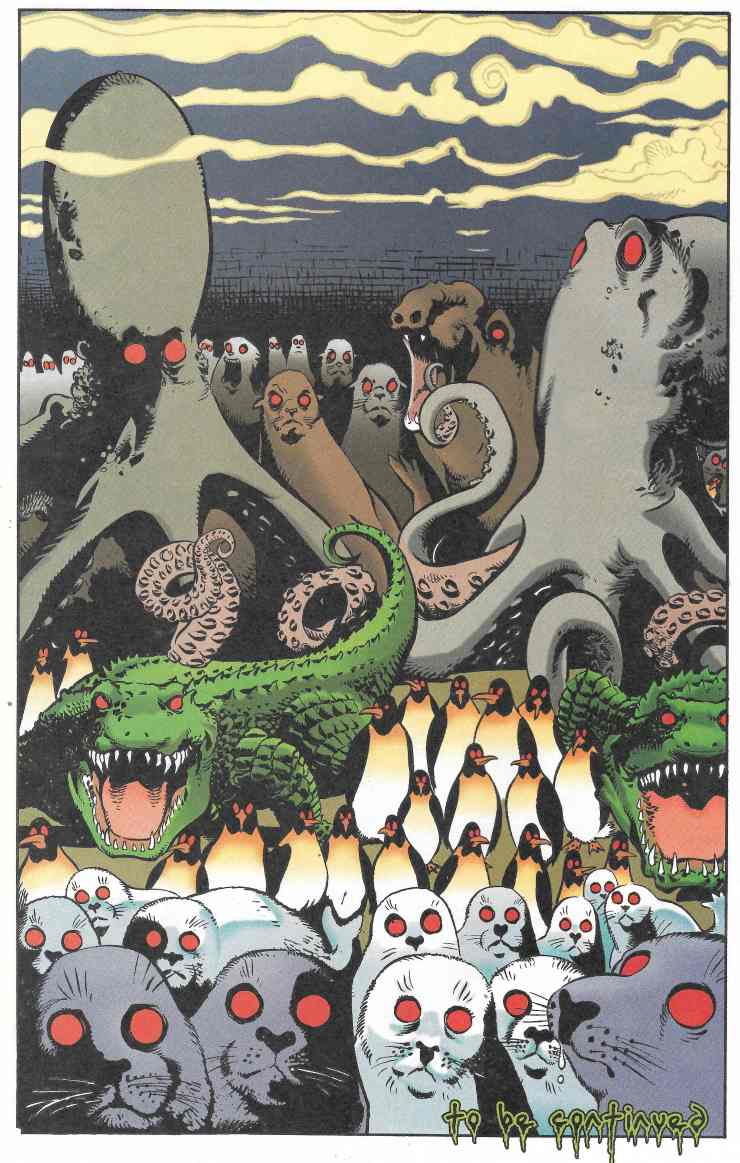 We are out until tomorrow, where we will be back with part two of this wonderful, crazy story.
Posted by SonOfCthulhu at 2:13 AM