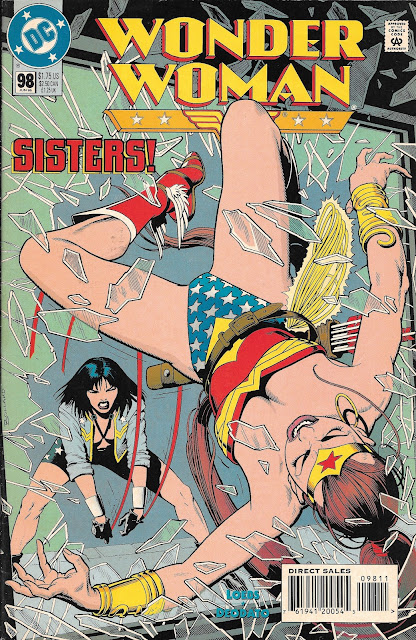 Maybe we should make that second one "wonder woman"

Artemis beats Diana in the contest.

Does it matter how? No, not really. Hippolyta doesn't tell either girl of her prophecy that Wonder Woman will die. Artemis accepts the mantle and lasso of Wonder Woman but brings along her bow and arrows too. She's the "more ass-kicker" of a Wonder Woman than Diana.

She's also made some mistakes at this point. The Justice League barely accepts her. Her confrontational attitude necessitated the hiring of a PR firm to help sooth perception of this new "wonder woman." Let's go with that when describing her this issue, lower class = lower case. 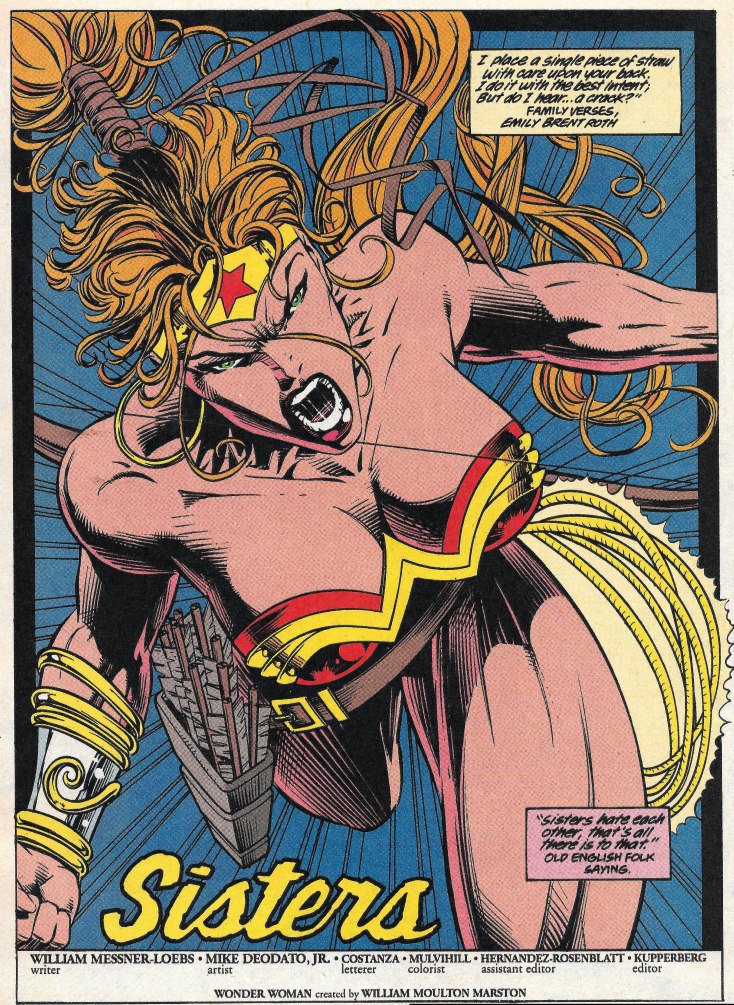 We open the issue with Artemis mad at someone, Messner-Loebs throwing not one but TWO quotes at us, and Deodato creating a panel that only a Liefeld fan could love. I'm not sure what is more off-putting: that Artemis seems about to pop out of the costume, that we have this odd "I don't have to draw feet, so I'm drawing the chracter charging at the audience!" head on perspective complete with speed lines, or that left thigh which looks more like pulled taffy than it does human musculature.

I…uh,…NO! just NO!. LOOK at those legs. Her foreground leg is almost twice the size of her torso, including the height of her ponytail. No, Deodato! Bad boy! It is chronic Liefeld syndrome.

Artemis shows how little she understands about the modern world she is supposed to be protecting. I've no clue if Diana actually let the Joker get away, however she isn't the emotional hot-head that Artemis is, so I'm laying my money on her being in the right.

Especially given Artemis needing lord it all over people by touting all of her "accomplishments". Remember where Hippolyta chastised Diana for being "too violent" and that necessitated a new contest for the Wonder Woman mantel? Apparently that concern is swept away here.

Artemis continues to berate Diana, as the grudge she harbors for the destruction of Bana-Mighdall will never cool.

This isn't the kind of Wonder Woman I want to see. Vengeful, aggressive, and implusive, Artemis pushes on hoping to get a rise out of Diana. It doesn't work. 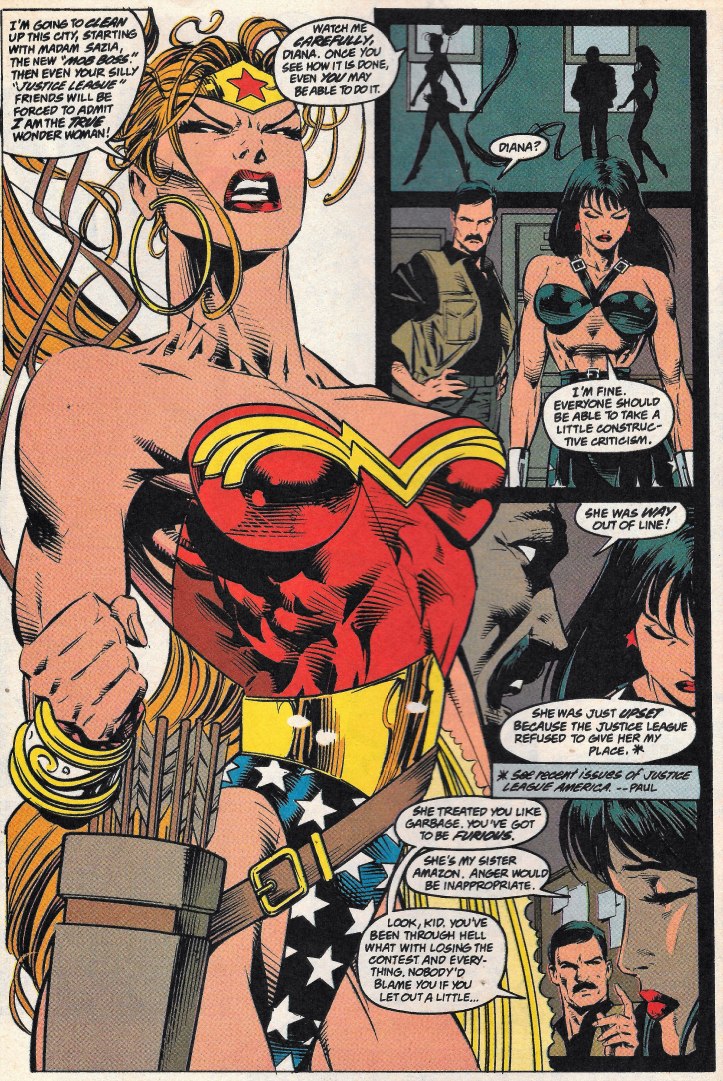 Diana is far too collected to ever fly off the han… 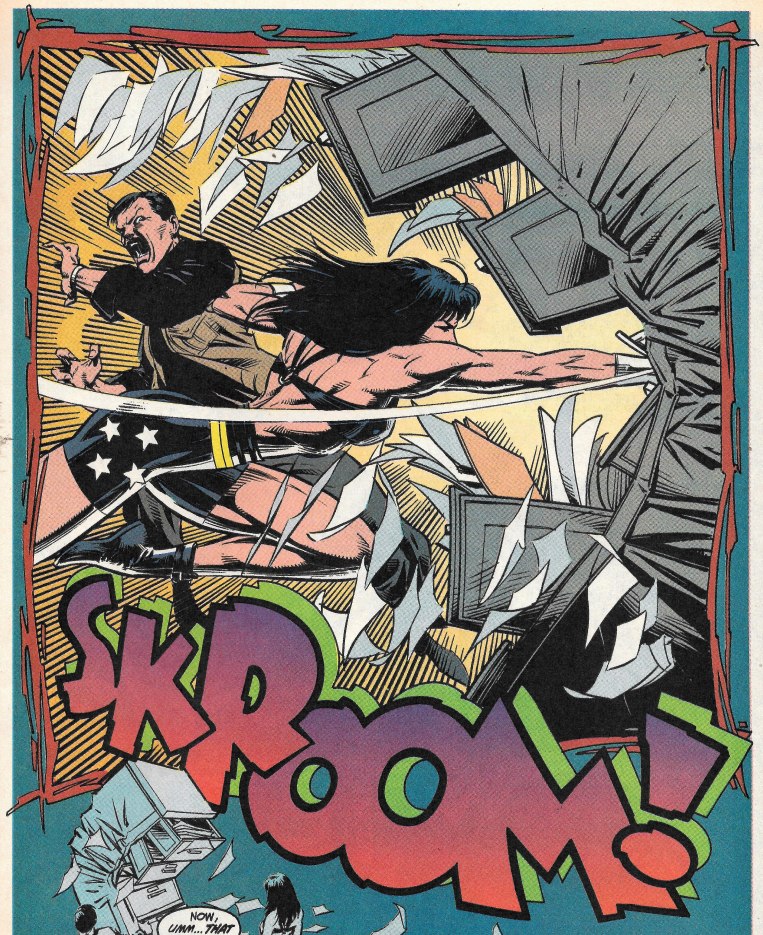 I hope that's not coming out of my tax dollars. 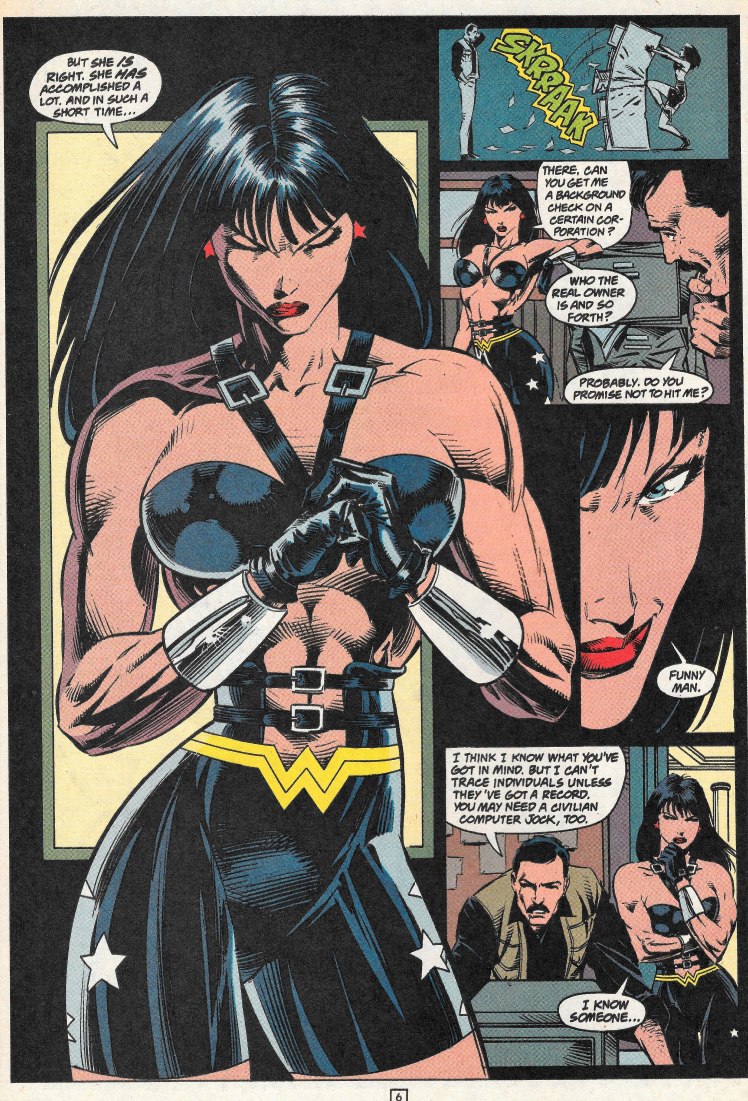 Luckily Diana can fix as well as break. And speaking of break, this "Wonder Dom" gear is kind of hot but totally inappropriate. It is no wonder that later years went the opposite route in costuming with pants, sleeves and shoulder plates. It feels like kind of a payback thing now.

I'm also gonna go there and say, while it isn't what I want to see Wonder Woman in, it is kind of hot and Deodato appears to restrain himself in the extra-long leg region by only showing her from mid-thigh up.

Diana worries about the public relations firm that Artemis hired to clean up her rapidly diminishing credibility, and goes off to investigate.

Meanwhile Artemis impetuously attacks Julianna Sazia at her mansion, Sazia being a known mob boss that Diana had run-ins with but could never corner. Looks like she owns a bunch of robots too. 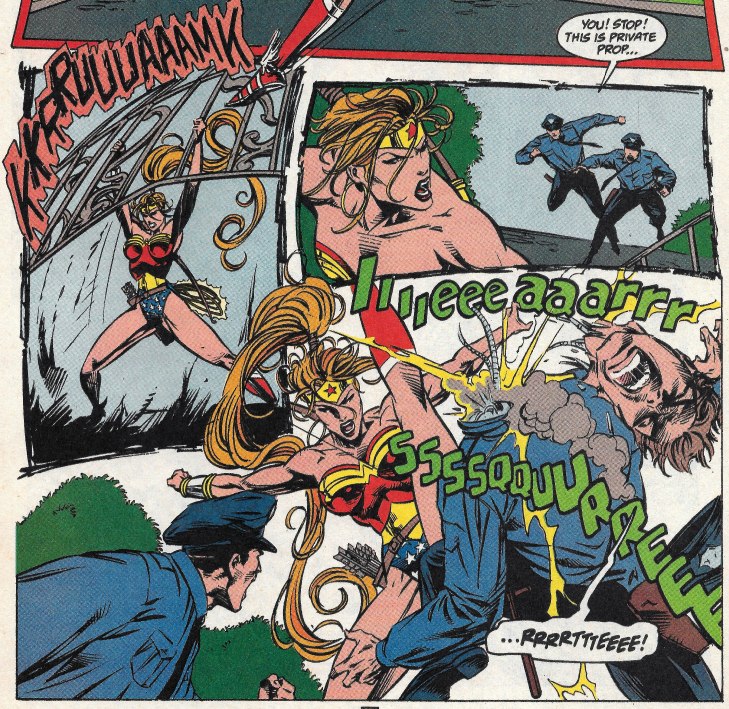 Which is kinda lucky because kicking security guard's heads off is definitely looked down upon in today's society. 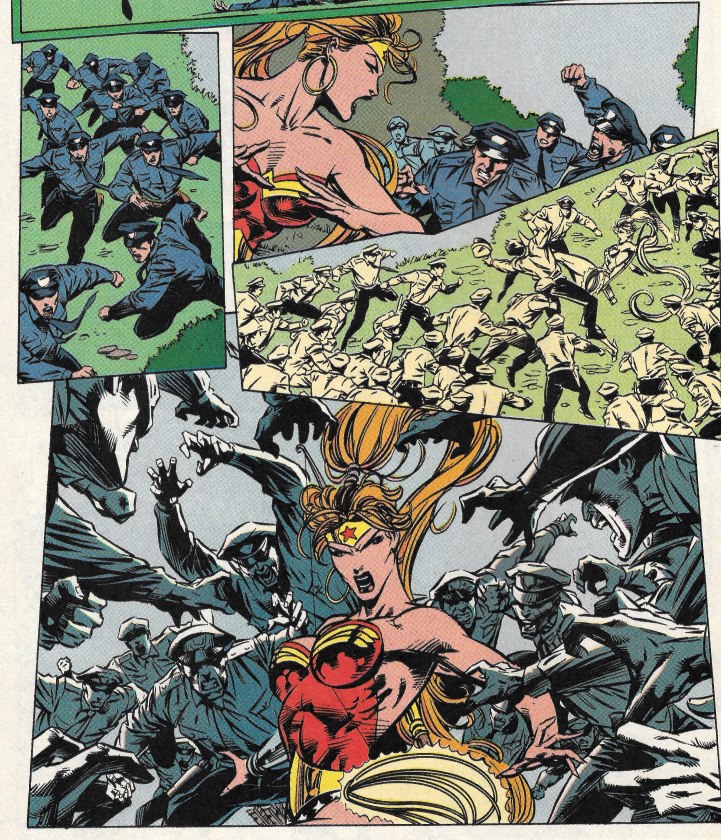 They keep coming and coming piling on to Artemis in a never-ending wave of blue polyester and robot parts.

To her credit, Artemis doesn't give in, and makes it to the mansion's door. She enters and is met with this… 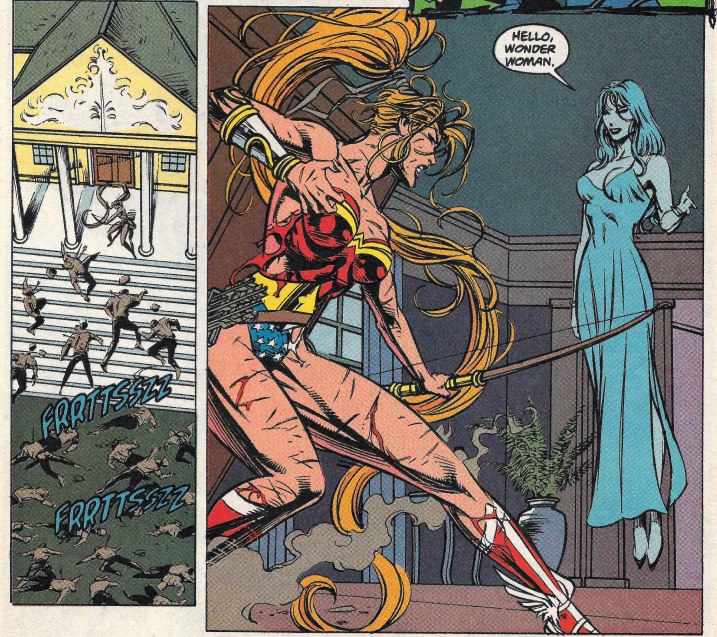 Which quickly escalates into the house becoming a discount Doc Ock. (Note: we never say Omega Red around here because, frankly, he sucks. 'kay?) 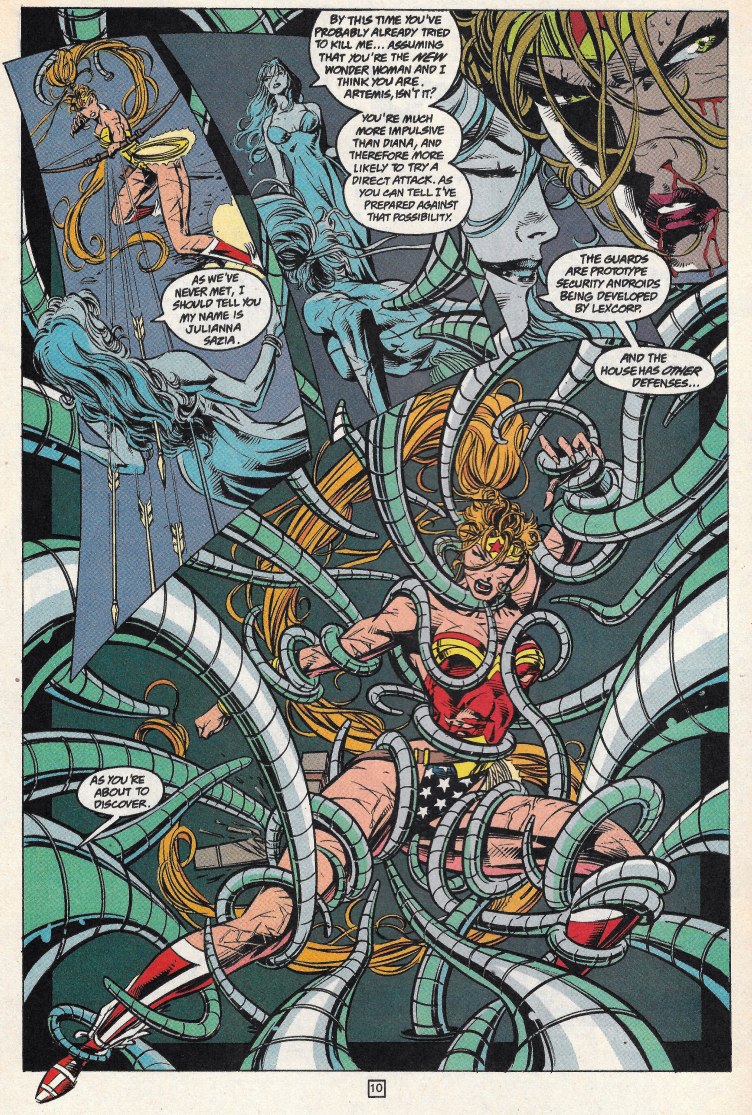 But holding the new Woman of Wonder indefinitely isn't Ms. Sazia's plan. Oh, no. She is aiming for the destruction of her enemy once and for all. 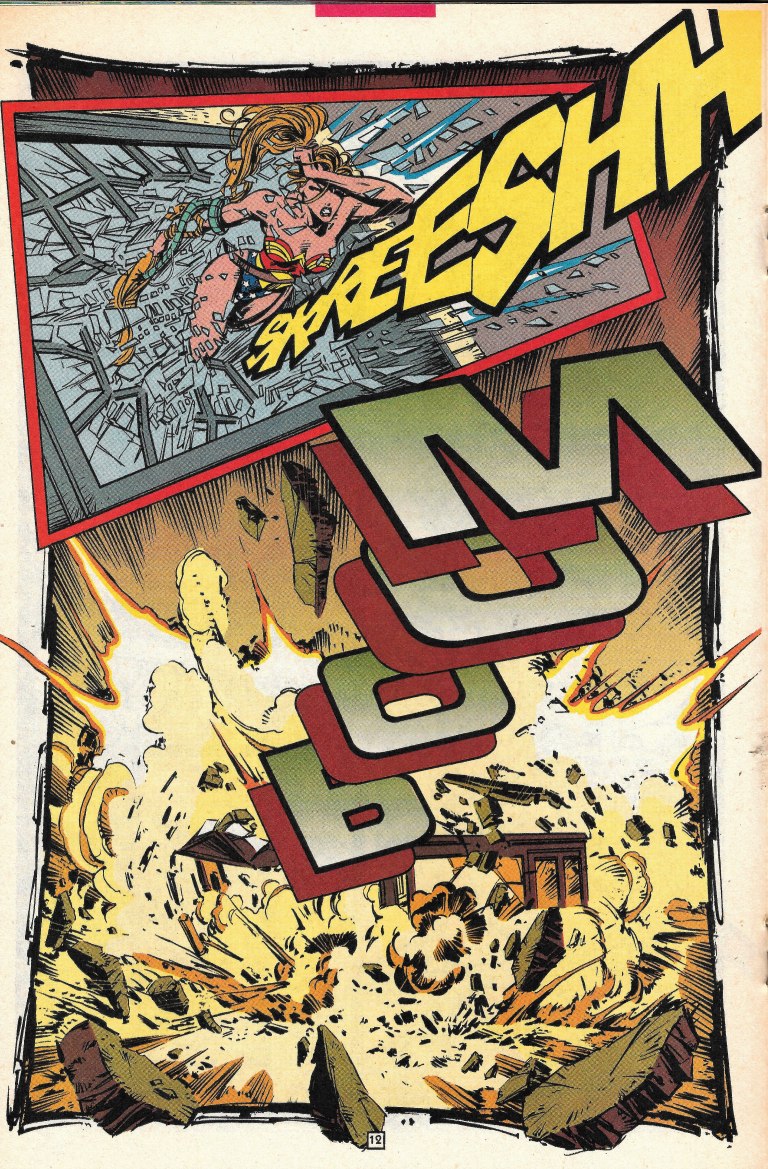 You'd think that would teach Artemis a lesson. Well, you'd be wrong.

As Artermis tends her wounds, Diana is researching all these supposed "victories" that the new wonder woman is claiming. Appears they are all setups by someone…someone tied to her PR firm. 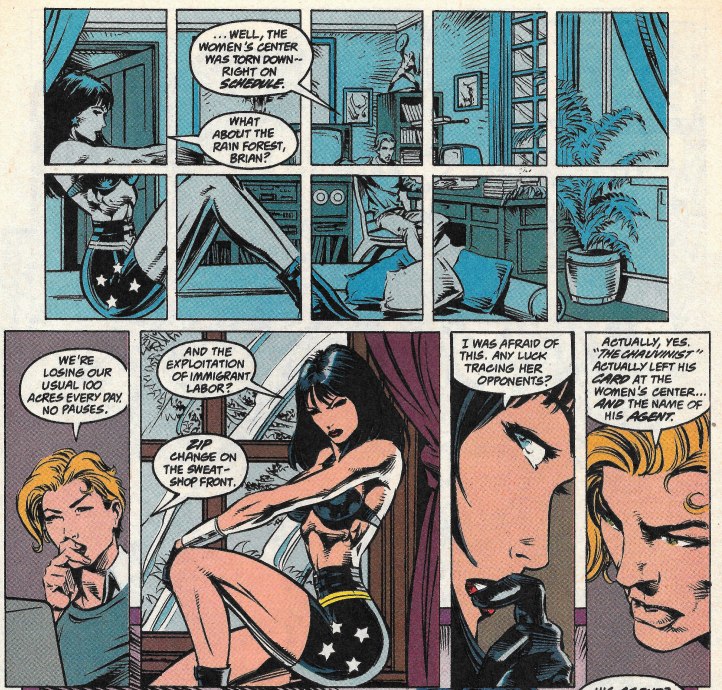 Which leads her to this movie set looking for a William "Bill" Baker. 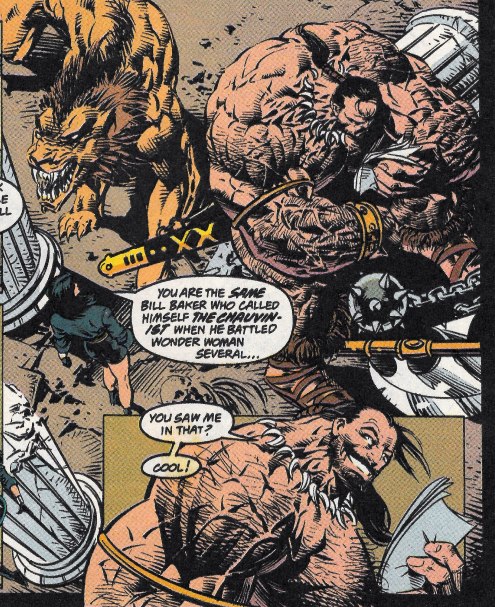 Appears that one of wonder woman's victories was against a metahuman actor posing as someone called The Chauvinist. Bill Baker is just an ordinary Joe doing a job. He spills the beans on another of Artemis' battle partners, who also was a paid actor. 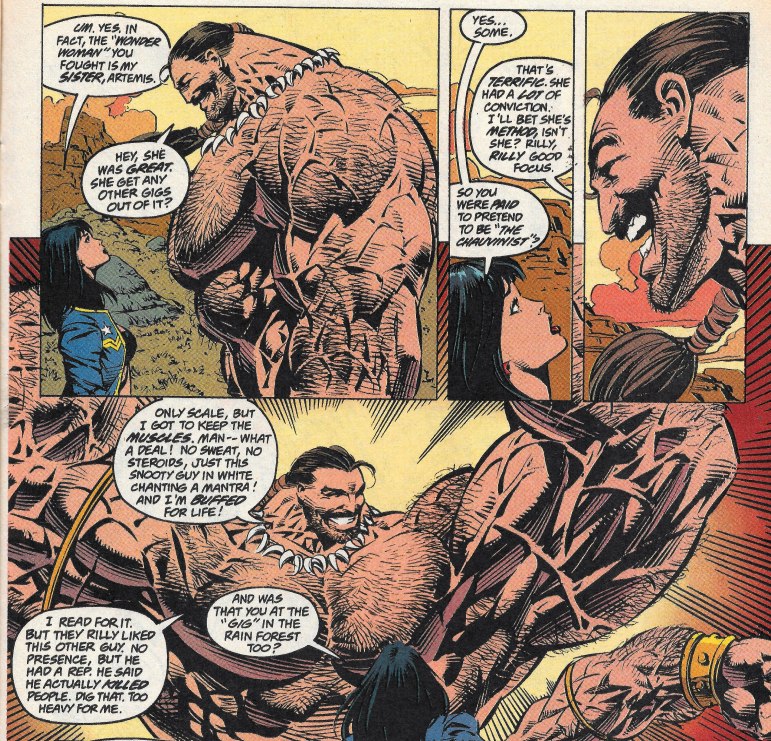 Thus Diana makes it back to the city troubled over how to break the news to Artemis. And Artemis arrives upset over falling for Sazia's trap, placing the blame for everything on her Amazon sister. That's when the fir starts flying and the legs start looking too, too long. 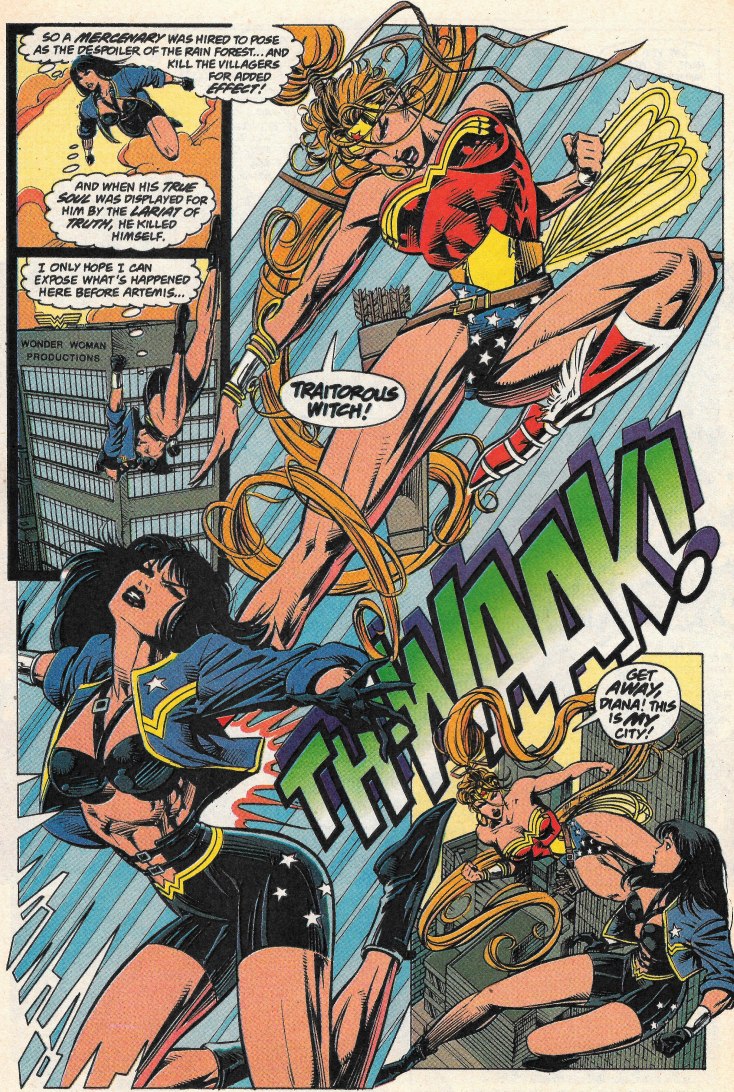 First Artemis accuses Diana of using lies to turn her friends against her. Not sure Artemis even have friends at this point.

Then Artemis kicks Diana in the teeth…

…and in the gut…or perhaps uterus…I'm unsure where that leg that is twice the size of a normal leg actually has landed.

Diana warns her that she does not want to do this. Artemis persists..and receives a full-power SHOVE (not a hit) from Diana in response.

Let's just see what that does… 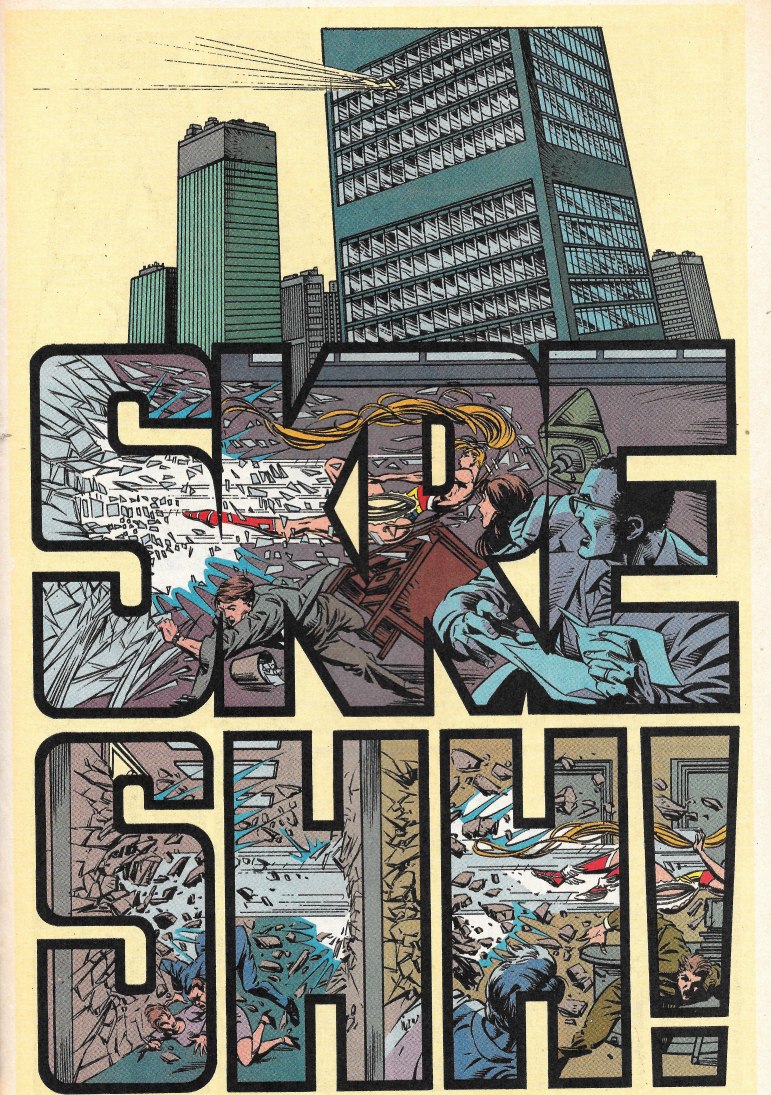 Uh, that building is occupied… 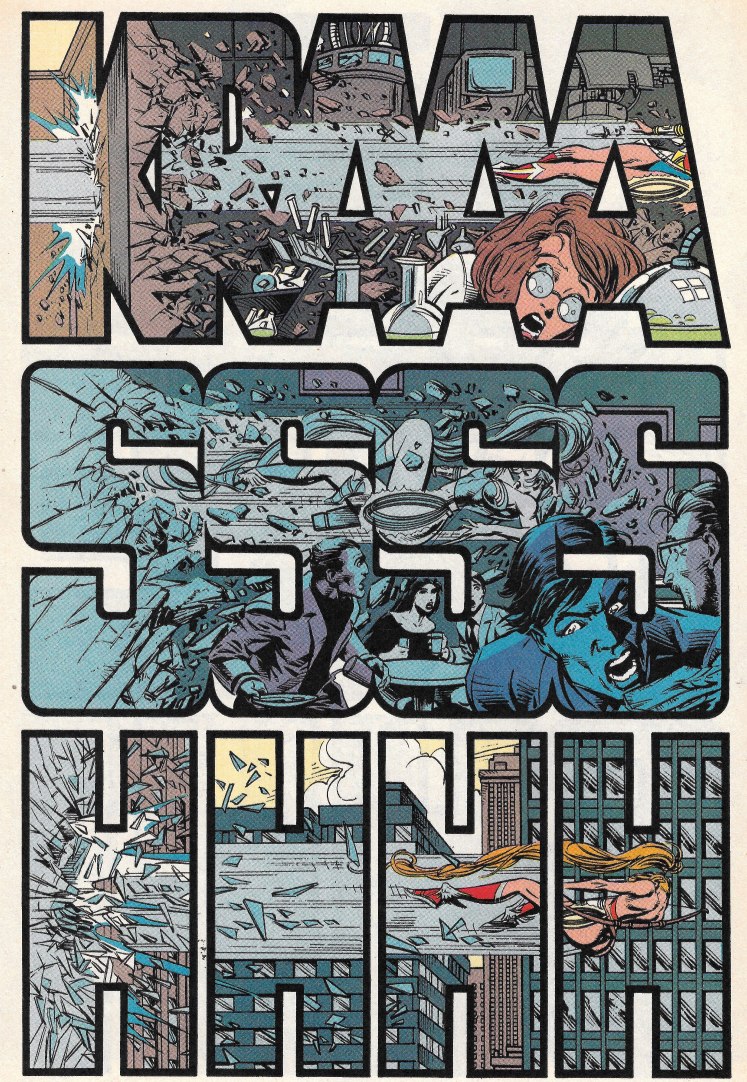 This is the energizer bunny of all shoves. Look at that! Oh shoot! Did Messner-Loebs channel Zack Synder for this? Oh, wait! That is office of the PR firm that has been pulling all these strings, including the death of innocents in a rainforest village.

Artemis fires back as Diana enters the building, knocking her to the ground. And suddenly shills for the company appear from everywhere piling on the cattle-plop that is keeping this "you and her fight" going. 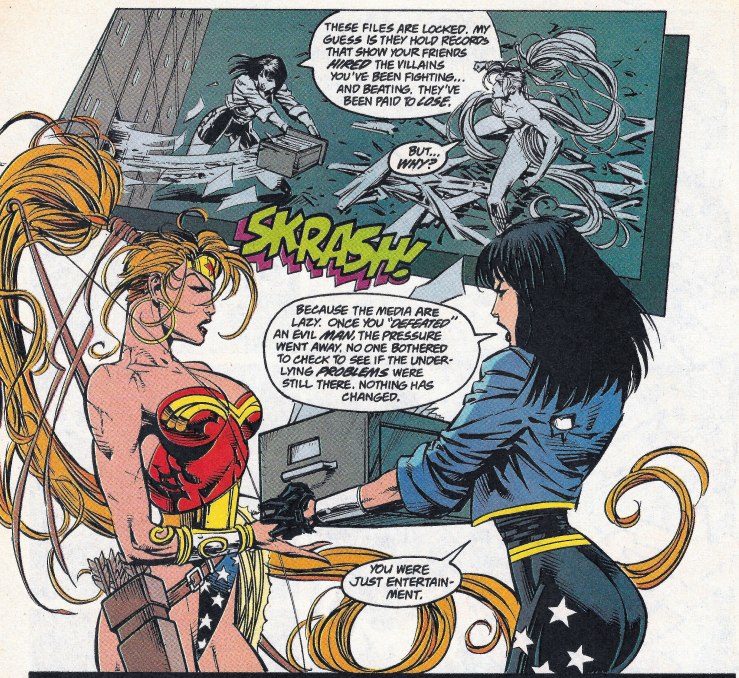 She quickly exposes the PR firm as a shill for another villain, who is manipulating events so Artemis stays angry. Unlucky for that guy, this White Magician, the sisterly bond between Amazons means these two make up in no time flat. 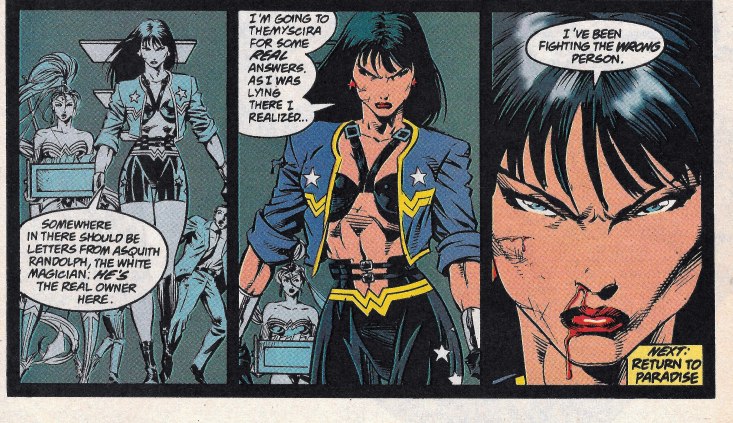 And as Artemis stands there with evidence of the White Magician's hand in all this, Diana gets a next issue blurb that states she will be looking for answers to why all this is happening back on Paradise Island. Answers that begin with her Mother and the second contest.

So this was a disappointment to me. Even the few panels that Deodato's art was "off" in proportion were enough to make me feel the drift into "unlikable" art. Some of his visuals are stunning, but I feel like if the characters were drawn full frame, we would end up with proportion issues. It is distracting.

As for the characters, Artemis is unlikeable, which she is supposed to be, but to an extreme that we don't even care if she has a redemption arc. She does, but in a very fatal and final way. Even knowing that, I can't muster sympathy for the new "wonder woman."

As for Diana, she is brooding and dark. Her attitude seems to match the clothes she now wears. I'm not ready for Goth Woman or whatever is on display here. I need a strong (but not boastful), non-angry, hopeful, and joyous Wonder Woman.

Get to work on that DC? Pretty Please?
Posted by SonOfCthulhu at 9:42 AM