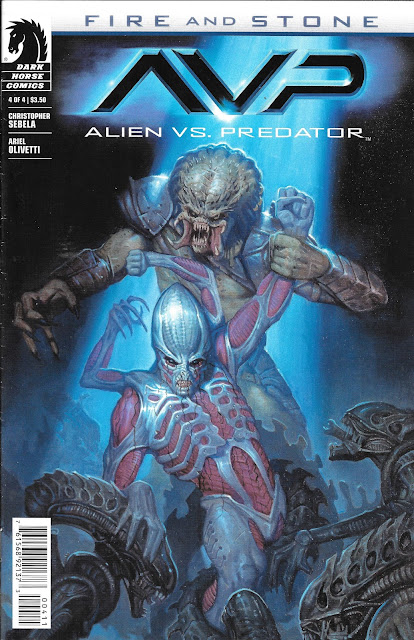 I did not see THIS coming

This is where everything gets completely bizarre and the wheels come off the track.

In the last review, I went over Prometheus: Fire and Stone #2, where one of the scientists decides to try injecting his "friend" who is a syntheic with a dose of the black goo from the Engineers. His friend, whose name is Elden, starts to mutate. 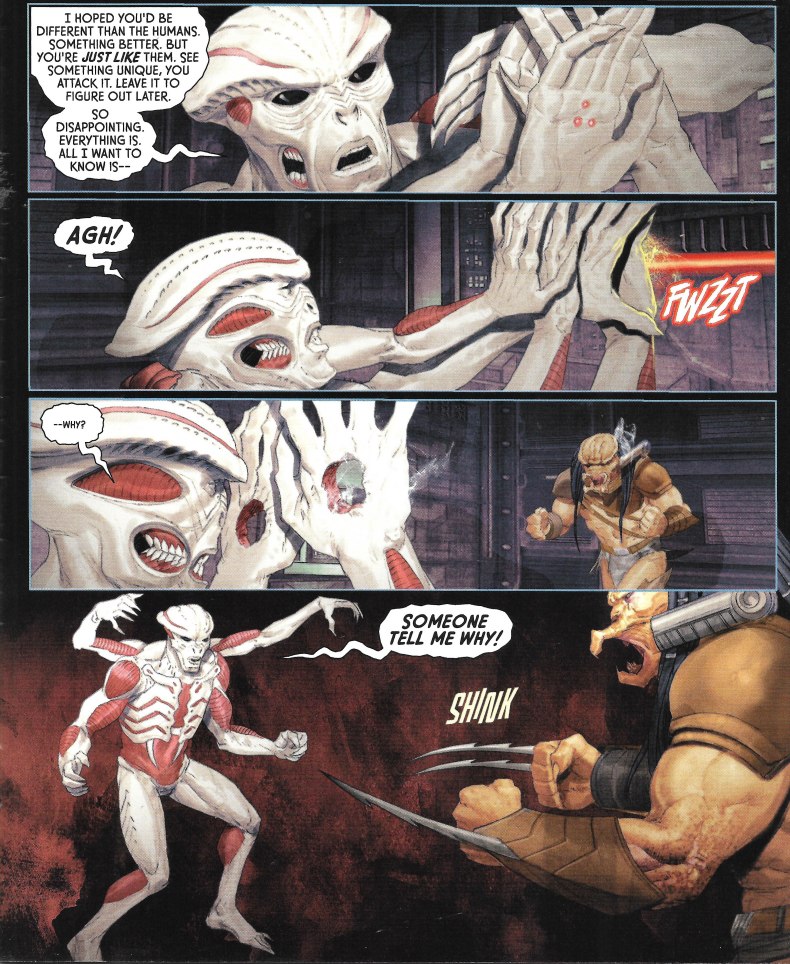 Seems Elden gestated and grew baby arms out of shoulders and huge holes in his cheeks while his skin disappeared. Or something.

This is supposed to all be genetic improvements, and some parts, like the ability to heal most any wound, are. However, I ask you how much of an "improvement" is it to have giant gaping holes in the sides of your mouth? Food will just fall right out as you go to chew it. That's kinda dumb.

And the opinion of 99% of the people I polled about this issue.

As you can see, Elden is fighting a Predator. Where this is occurring and how we got here? No clue.

But at this point it doesn't matter. This is the fourth book of this series, which is wrapping the nonsense up of the prior three issues. The way these worked were there was a Prometheus Alpha book and then four miniseries that spun out of that. They were Aliens, Predator, Prometheus and Aliens vs Predator and each of those series got four issues. After that, the event had a capper in the form of a single Prometheus Omega issue.

So this book leads directly into that Omega issue and we have two characters from the Prometheus mini as our focus: Elden and… 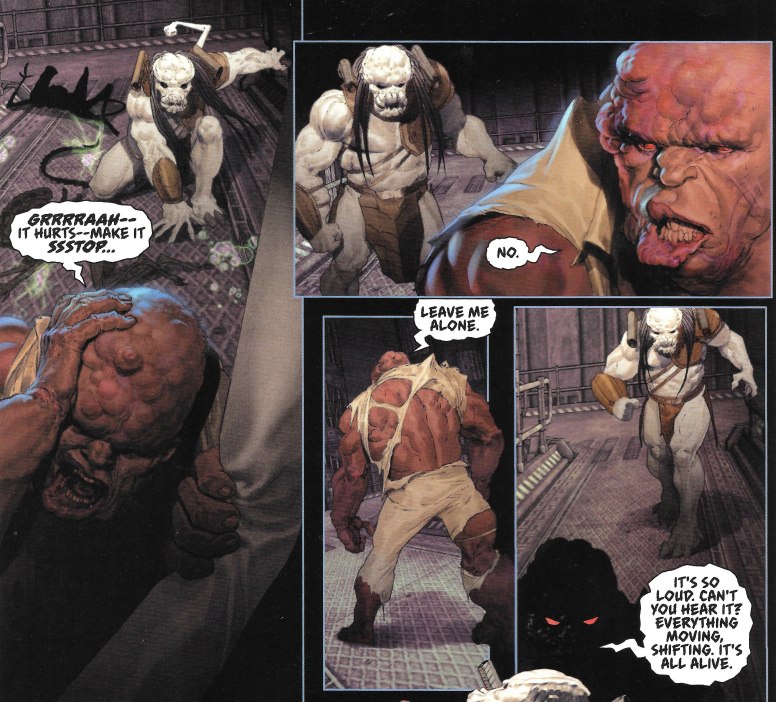 Francis? Really? He took the black goo too?

And notice he is fighting a Predator who has ALSO been drinking the black goo. It has a baby arm as well (because they are so HANDY! Get it?) and instead of four mouth-fingers he now has an entire two fistfuls.

This is the most insane, crazy shit I've ever seen in a tie-in book. How did they get away with this? Not a clue.

Even though he is a grossly mutated Predator, he's still a Predator, which means he's only interested in killing people. And Francis is his target. Although he's become a much more lethal and interesting target. 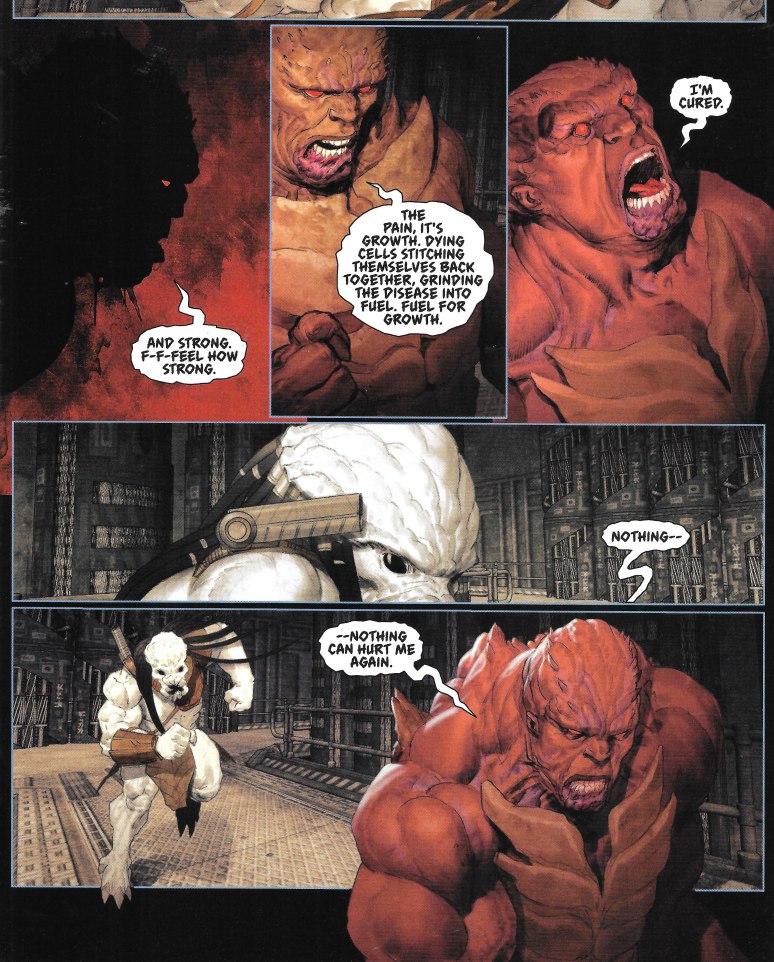 Apparently I'm wrong too. The goo can cure cancer. Those side-effects though. Ugh. I can see the side of the black goo cancer cure now.

Warnings:  Will turn you into a hideous killer-mutant version of yourself with extra limbs or boney ridges likely. Use only as directed.

Meanwhile regular Predator (who now seems kinda "yesterday" as far as Predator fashion goes) is still trying to kill Elden. The mutant synthetic has a new idea on how to defeat him. 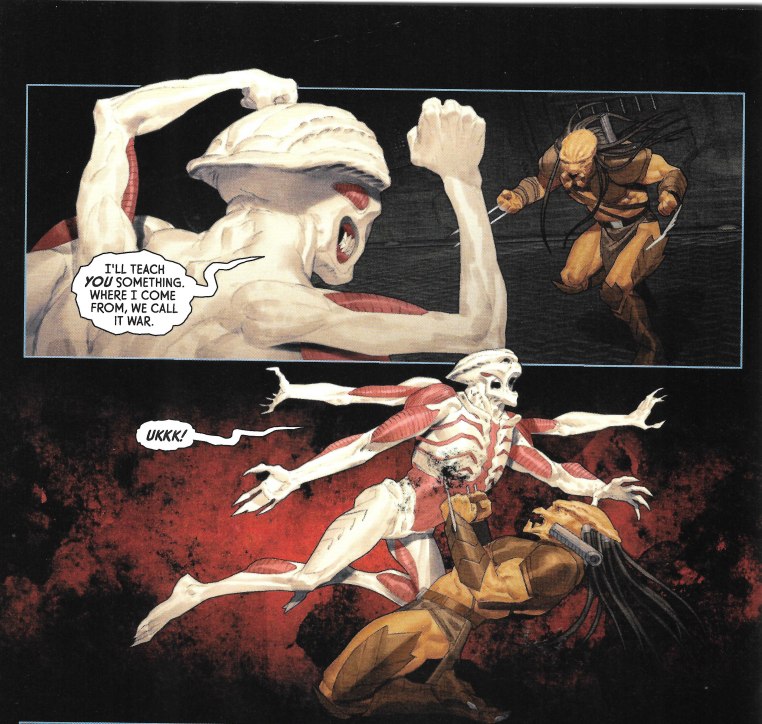 I call that jumping onto his claws, but whatev's. Elden keeps on fighting the beast… 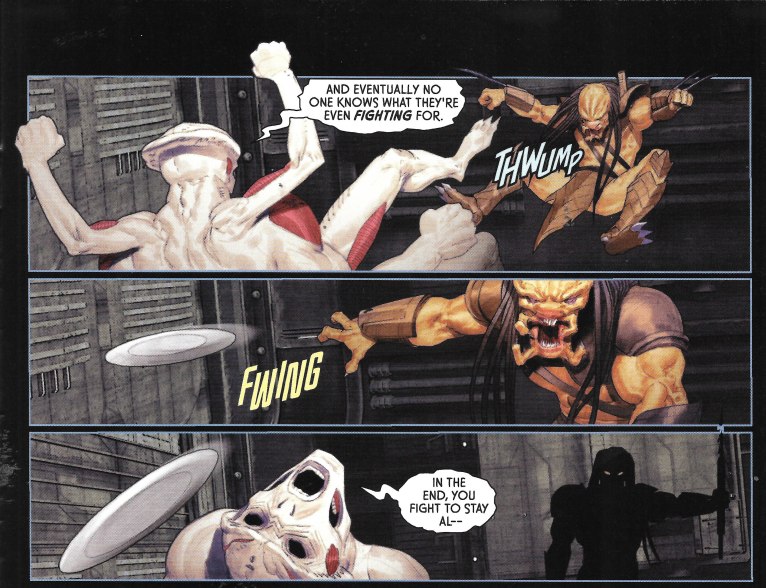 Eventually nailing him to the deck so the regular Aliens can have a go at him. 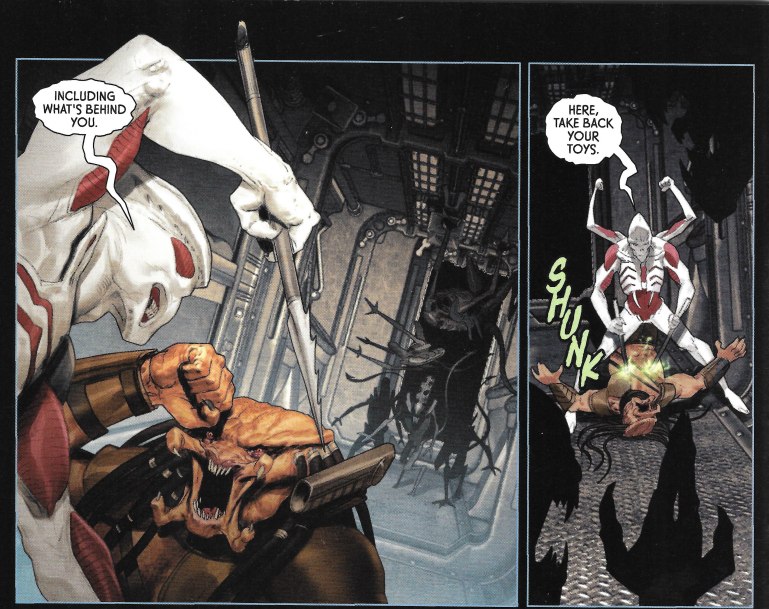 While Elden runs off and the Aliens start to munch down on the Predator, we turn back to Francis fighting the "upgraded" Predator. I swear, if this book gets any more freaky, I am going to stop this review! 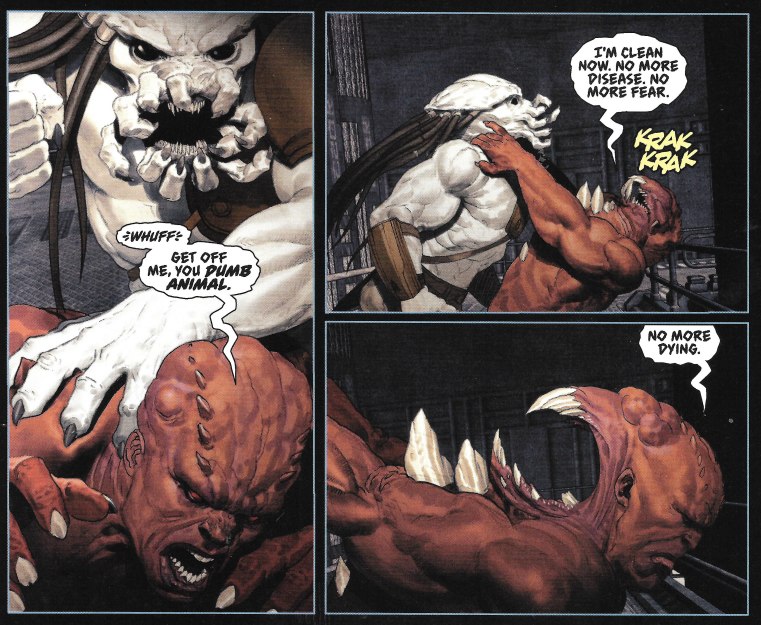 Francis is grabbed from behind and his HEAD grows a backwards facing mouth with giant spike teeth! Wah?

I really don't know what the black goo DOES and since Lindelof had his dirty little fingers all over the script, I don't think ANYONE really knows. It was a "black smoke monster" kind of thing that they never planned to explain or hoped someone else would explain for them.

But I'm pretty sure that whatever it does, it isn't some kind of "magic" make you a regenerating muscular monster that can change form at will substance. I'm just thinking this is all too much like Carpenter's The Thing.

So I'm warning the book right now that it needs to stop this or I'm turning this review around!

Francis pummels the creature for a bit and then it breaks both his arms. 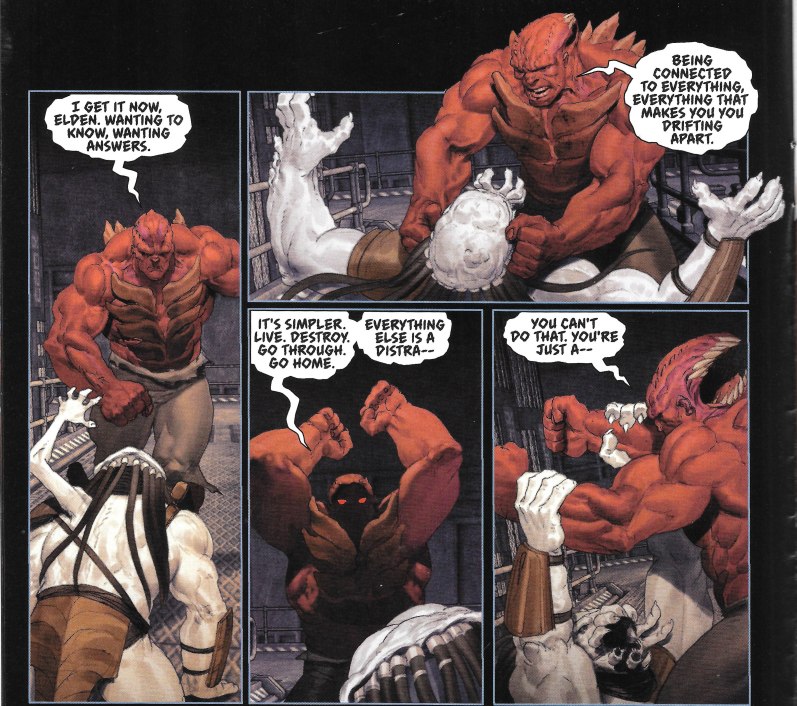 Right after this part here. Snap, Snap. But I'm sure he will heal up in a second.

The regular or "classic" Predator doesn't succumb to the swarm of Aliens even though he is pinned down. 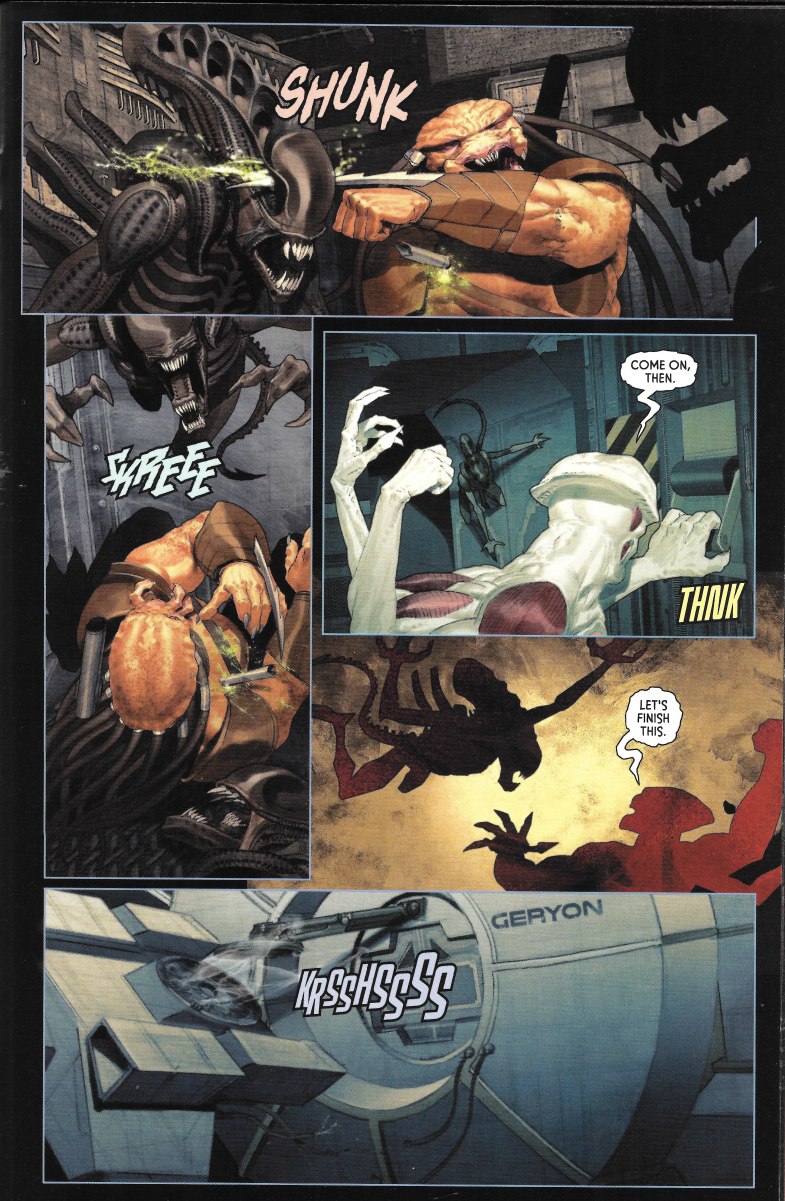 It just takes him a minute and he's up kicking their butts while Elden is trying to build some common ground with him. (and also tossing Xenomorphs out airlocks with all the trouble of someone batting away flys.) 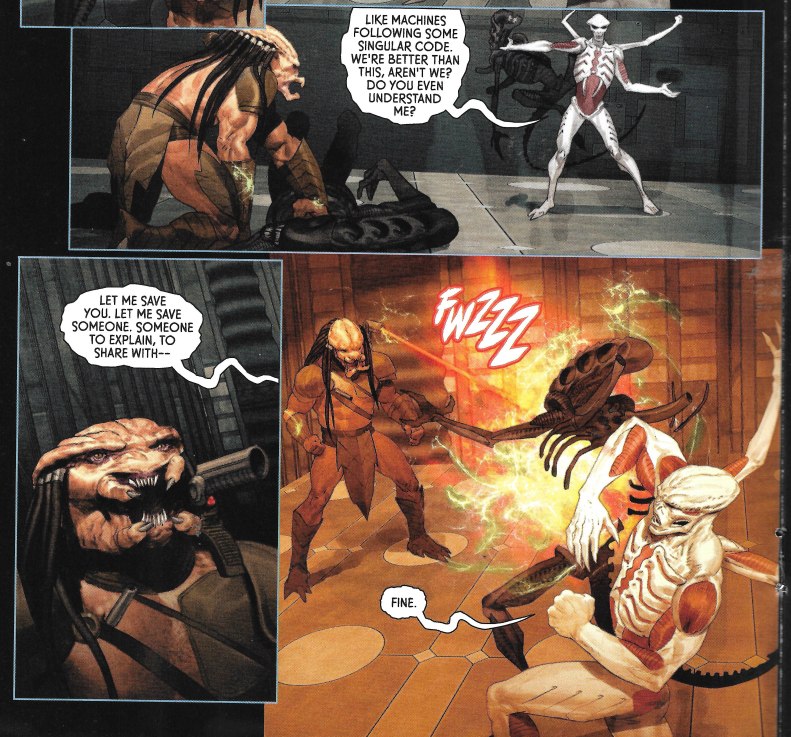 His blast spreads enough acid to make a nice big hole in the ships outer hull, so Elden bids him farewell by saying he at least tried to help him and that was more than anyone had ever done for him. 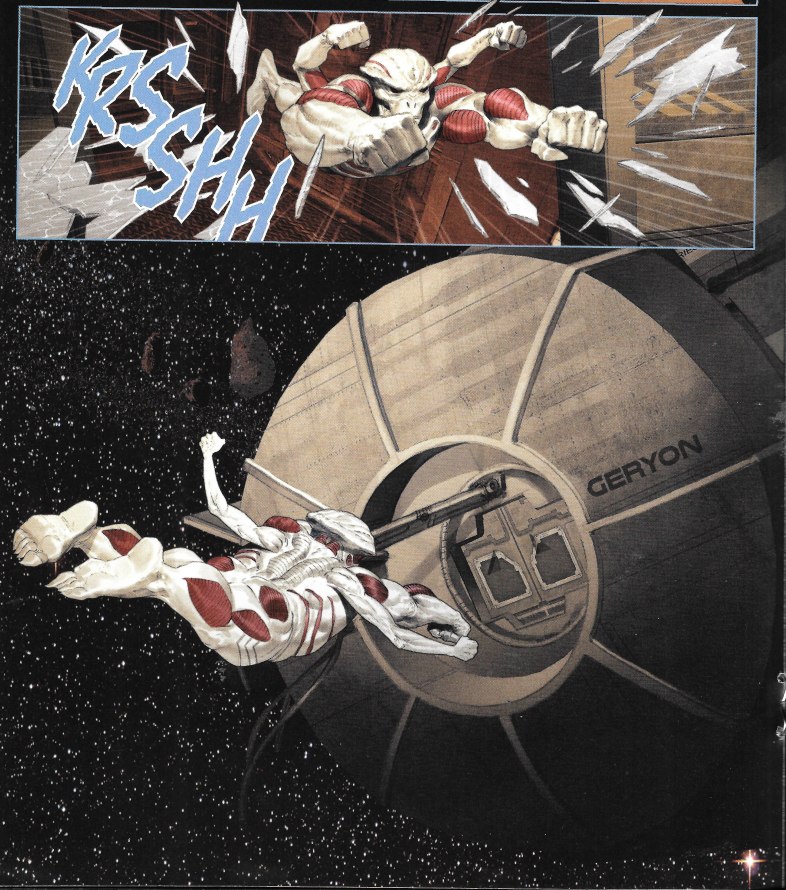 And with that he breaks through the starship's viewing port and springs over the Geryon's airlock.

I can't even with this book. Now it's slipped genres and is a superhero comic. Here comes Elden's "X-tra Arm Man" to save Francis' bacon. (which should never be confused with the Engilsh Renaissance thinker) 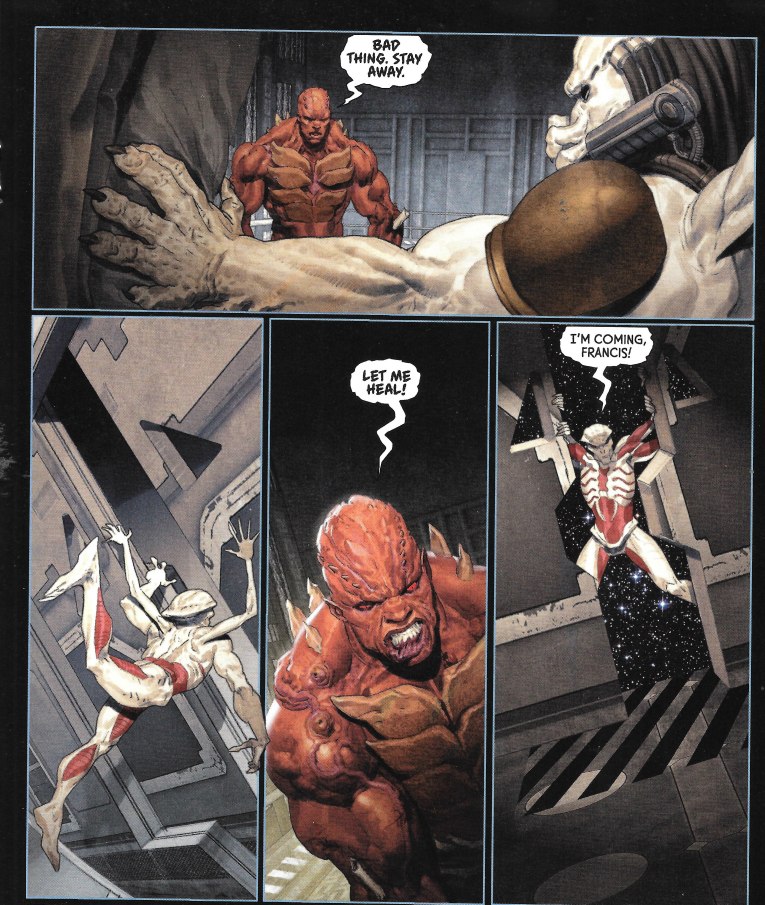 He arrives too late, as upgraded Predator cracks Francis across the head, breaking his jaw. 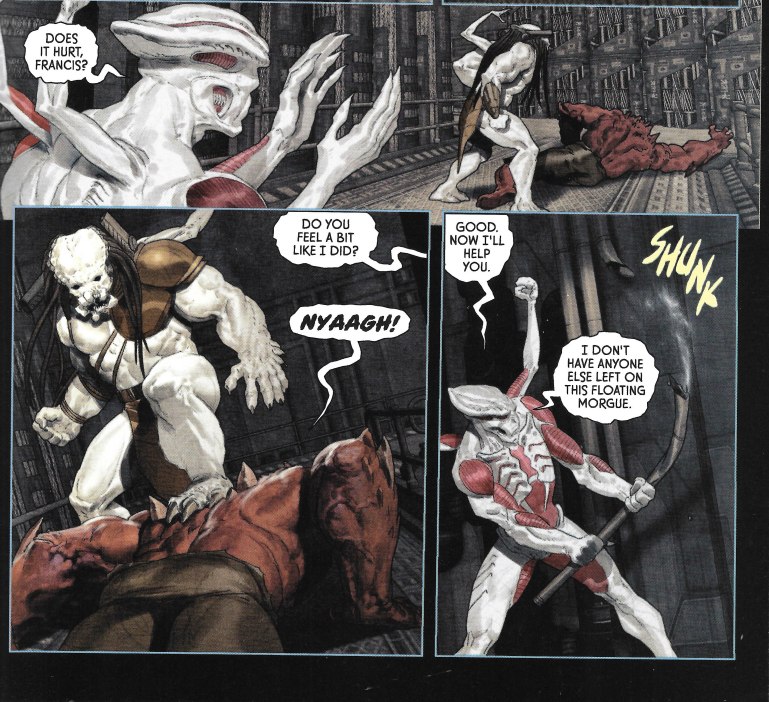 …and when Elden arrives, he withholds assistance until he sees Francis is clearly in pain. Which is a cruel thing to do, even for an four-armed inside out monster. But, then he tears a hunk off the ship and brains Pred 2.0 distracting it. That allows Francis to sneak up on it and rip off its third arm. Then it gets all WWE as the each grab an arm and make a wish. 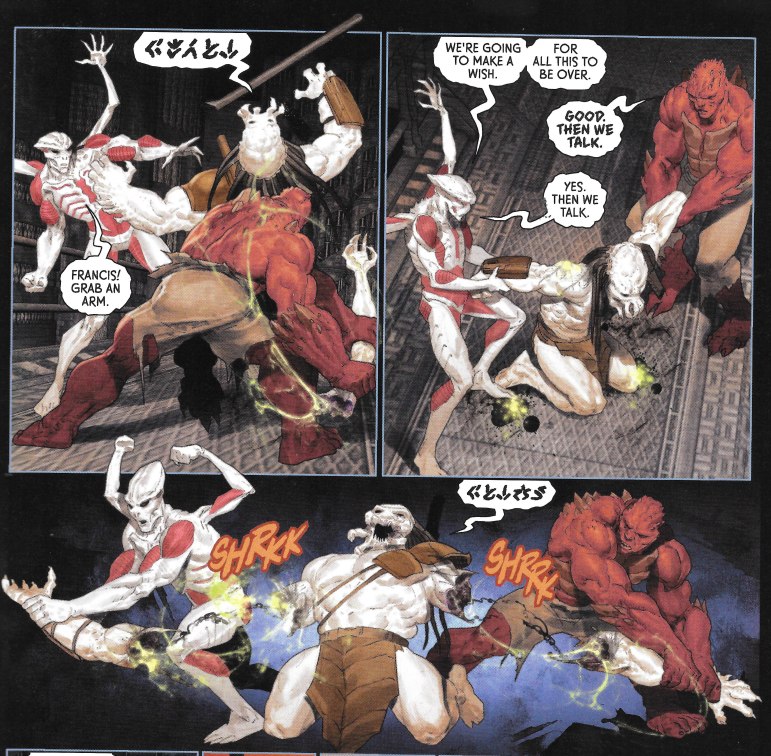 After that Francis and Elden bicker like an old married couple. 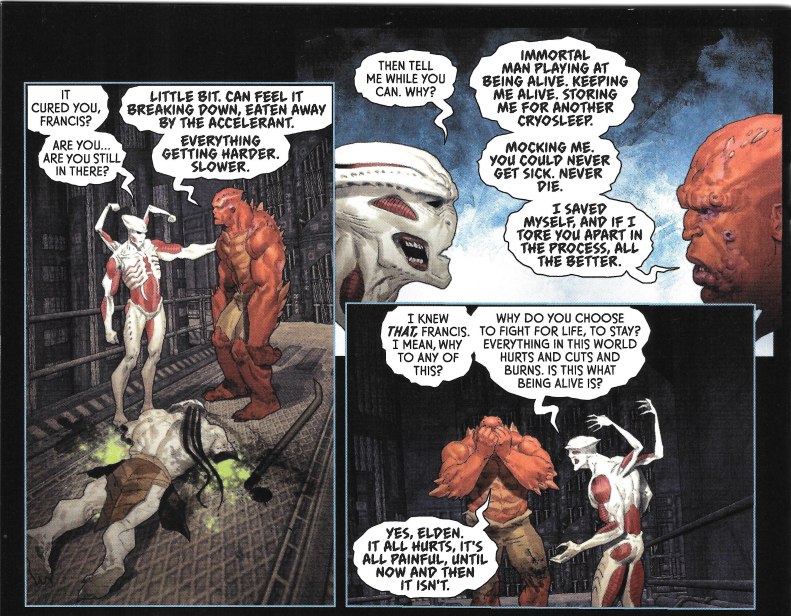 Elden is trying to understand why they fight to stay alive and Francis had very little understandable to say regarding why being alive is so important.

He does have some advice for Elden. 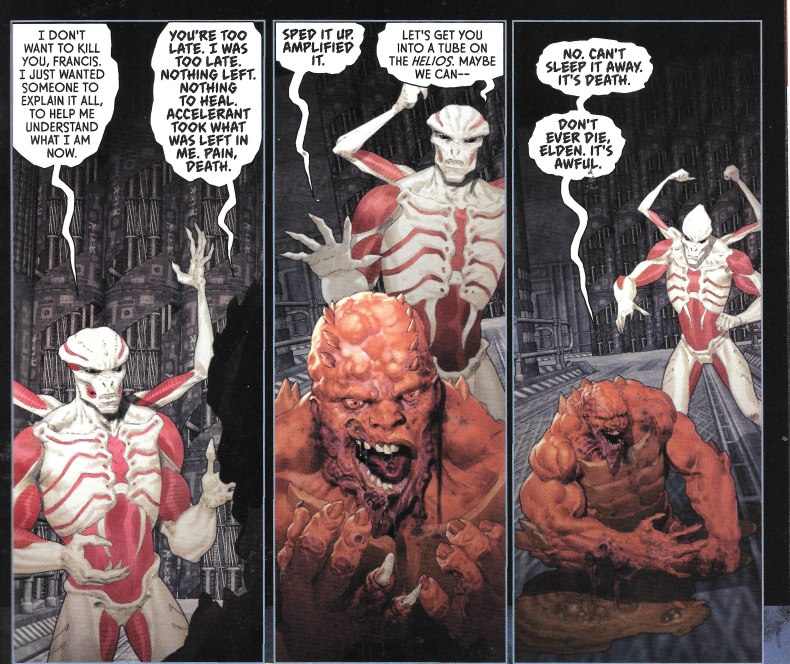 And then he dies.

After he dies, Elden puts a little piece of him in a small box ether to keep Francis beside him symbolically or having something to do with using his biological material because it has been advanced by the accelerant. Not really clear on why. Then he chats up the Aliens, who are roaming around the ship like house cats, as he puts himself in cryo-sleep. 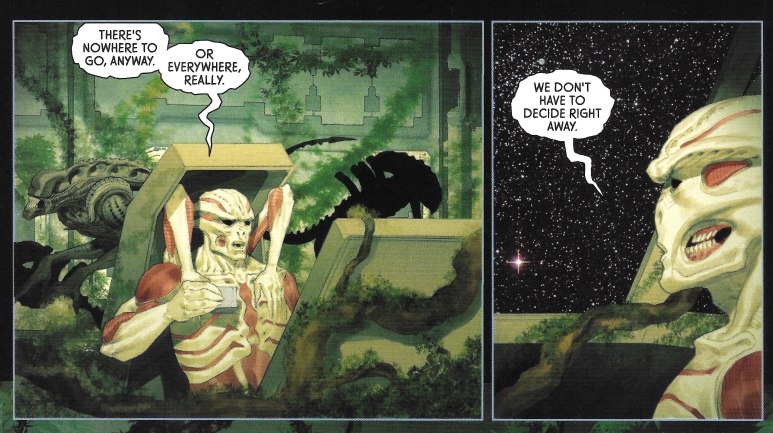 I kinda hated this one. Too derivative. Too "out there." Plus the story is mucho stupido. At least the Aliens were spared having an accelerant version of themselves running around.

And with that wild and weird note, we end our Aliens post-a-day, but be back her on Monday, because Wonder Woman is due out soon to theaters and, even though DC isn't promoting it like a big blockbuster, The Crapbox will be. Check in and see what the discount bin has delivered to us on the Amazon Princess.

Posted by SonOfCthulhu at 2:25 AM