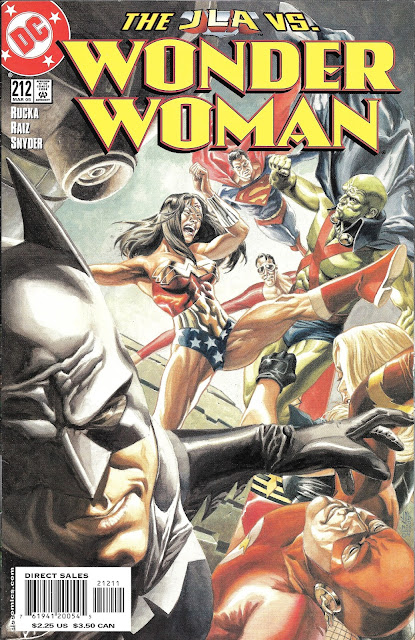 I know! I know! I'm skipping over a bunch. A bunch of history and a bunch of Crapbox issues. Things that shouldn't be skipped over. But I feel I MUST as I want to get this issue out there now.

The Crapbox has gone Wonder Woman overload and I am fully prepared to throw out all the issues I have in my possession around this amazing superheroine. That means you'll still see some Wonder Woman issues in June. Some of those will be before this issue even.

But I am skipping chronology because this issue beginning is JUST TOO GOOD not to put out there before the movie.

A little background: in this run Rucka made Wonder Woman bli…you know what? It has more impact if you DON'T know exactly what is going on. 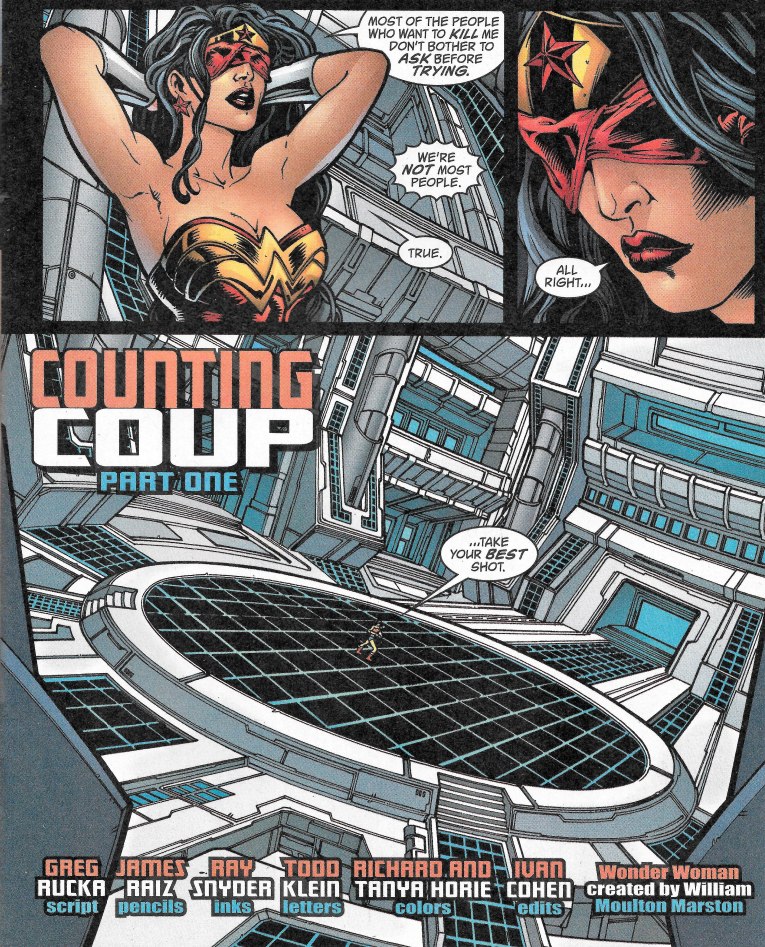 We begin with little fanfare. The setting looks to be the JLA Sattelite or Moonbase. Wonder Woman ties a blindfold around her face. She signals she is ready. And boy is she ever.

Here they come: Plastic Man, Flash, Black Canary and Martian Manhunter. All of the formidable in one fashion or another. 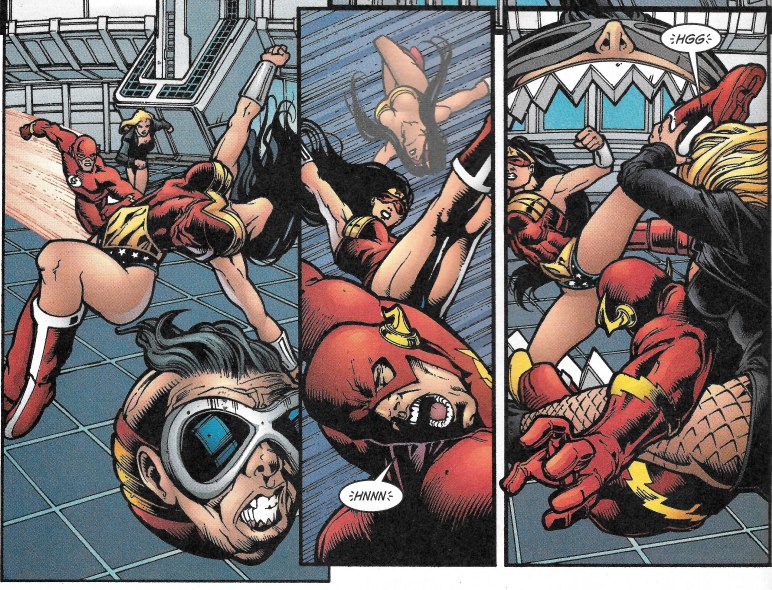 She dodges Plastic Man's initial attack while lining up a kick that throws Flash into Black Canary. As they both topple over, Diana taps out Black Canary with a boot to the noggin. But Plastic Man is setup to snap a trap on Wonder Woman's back. 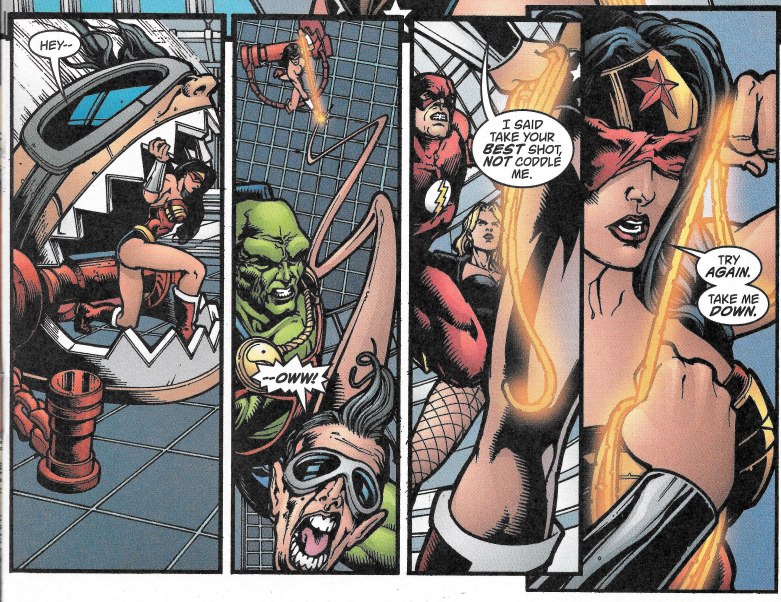 She senses him, blocks his spring-loaded bite, and then applies a judicious use of her magic lasso. Martian Manhunter is caught off-guard by Plastic Man's bouncing cranium. Diana appears to be a bit miffed, as if the JLA'ers aren't trying hard enough.

Superman and Batman are monitoring this from a control room. It appears Bats knows exactly what is going through Wonder Woman's mind. His keen intellect notices Diana having trouble dealing with Flash's speed. 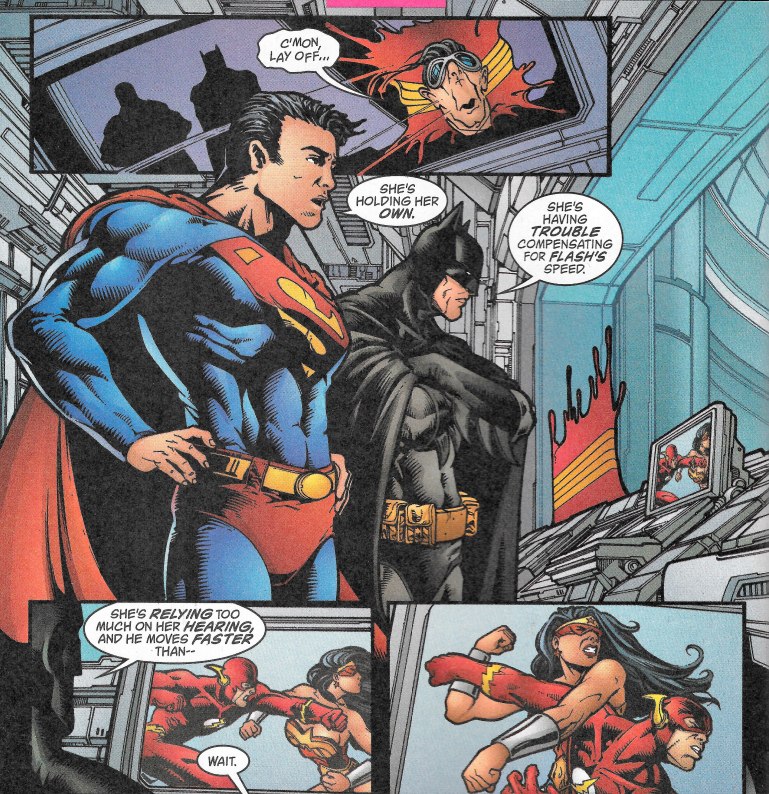 So while this may seem like "characters punching each other", Batman's comments add another layer to the proceedings.

Bruce determines that Wonder Woman is adapting, noticing how to detect Flash's attacks before they happen. That means she'll soon defeat Flash and perhaps everyone else. They can't have that. 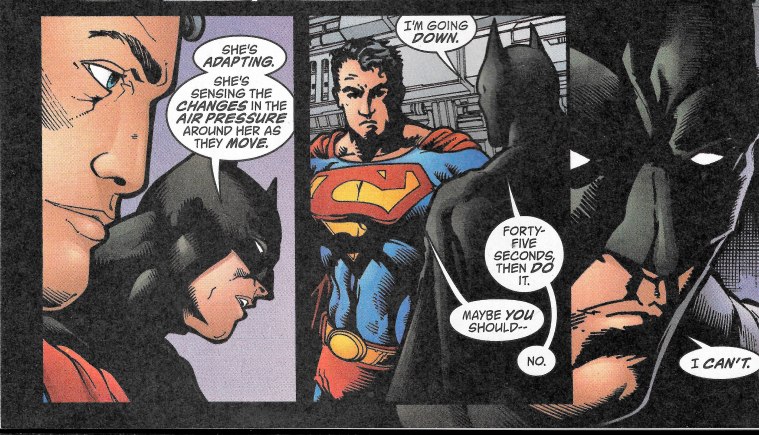 He moves to go down and join in the fight, with a final order for Clark to wait forty-five seconds and then "do it." Supes wants to change places, but Bruce states that "I can't" with a grim look on his face. "'Can't' what?" we wonder.

By this time, Diana is using a lassoed J'onn as the ball end of mace, smashing him into his fellow leaguers. The Batman swoops in and they go hand-to-hand for a moment. But only for a moment… 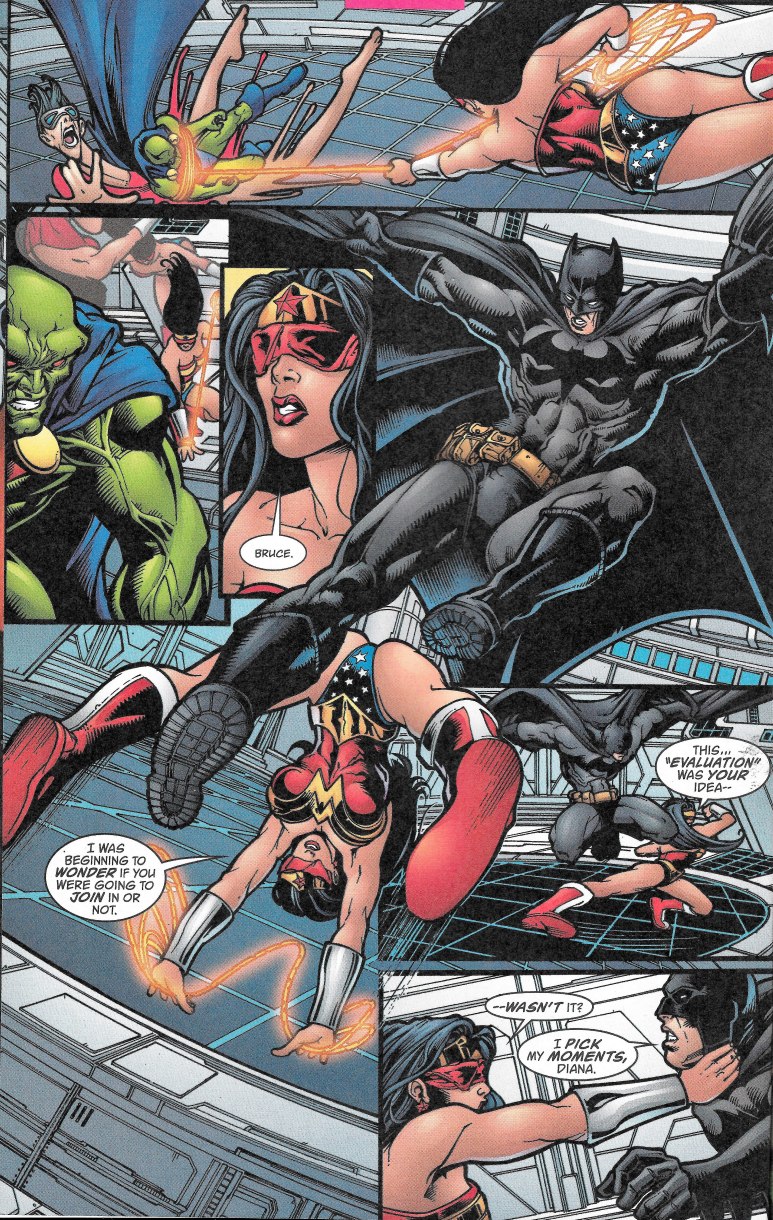 ...then Diana threatens to squeeze Batman's head like a grape. And just when you think Batman is toast, he strikes Diana in the ears, causing her to lose her grip… 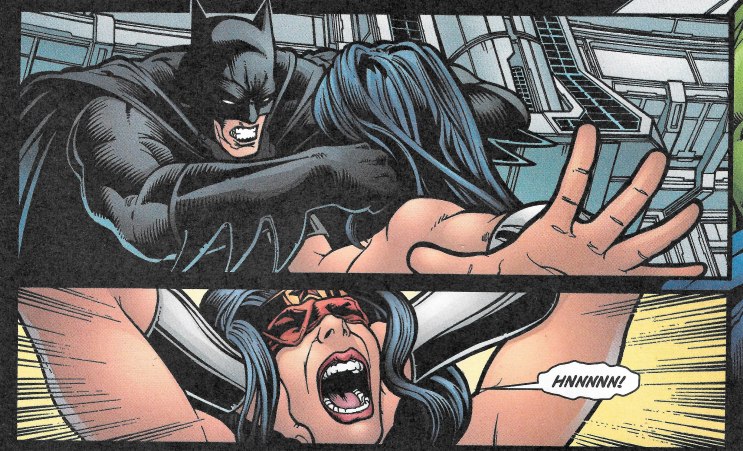 …and then Bruce sends in the others. 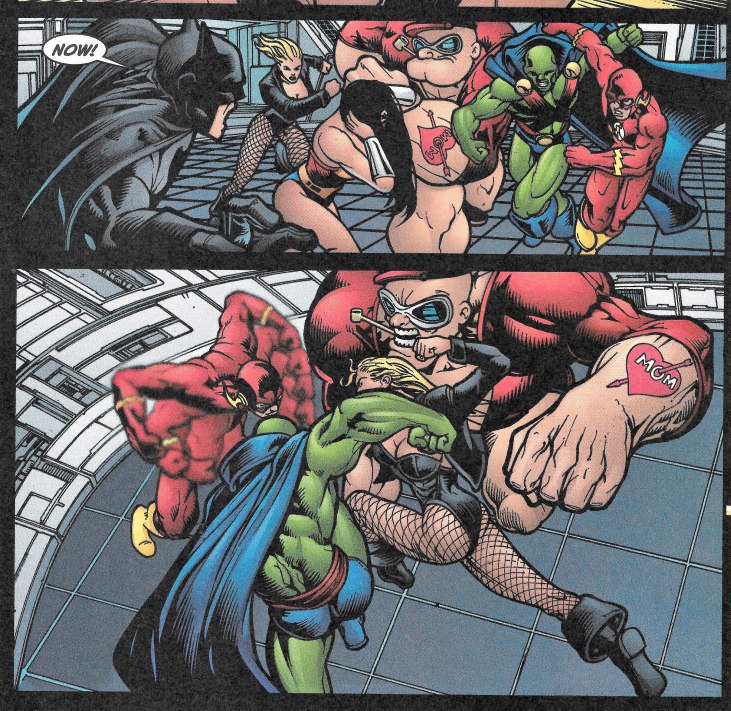 Still they are facing one of the two strongest people on the planet. That dogpile tactic doesn't work for very long. 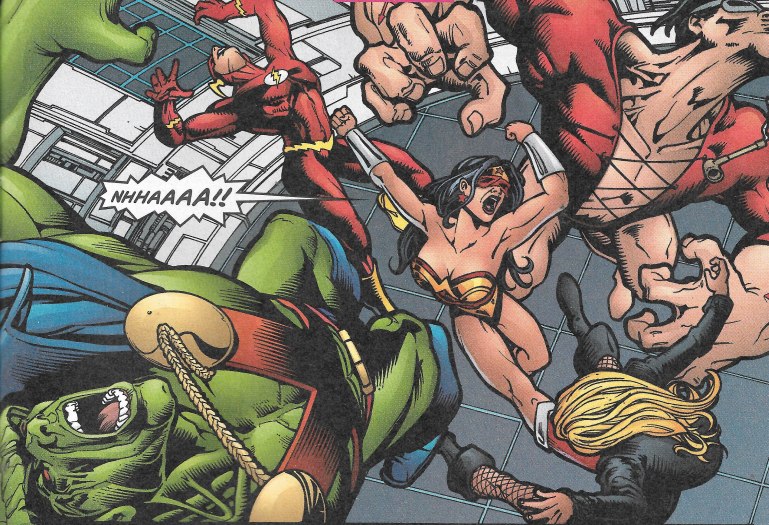 Wonder Woman feels everyone is goldbricking though, and she pretty much knows how to express it. 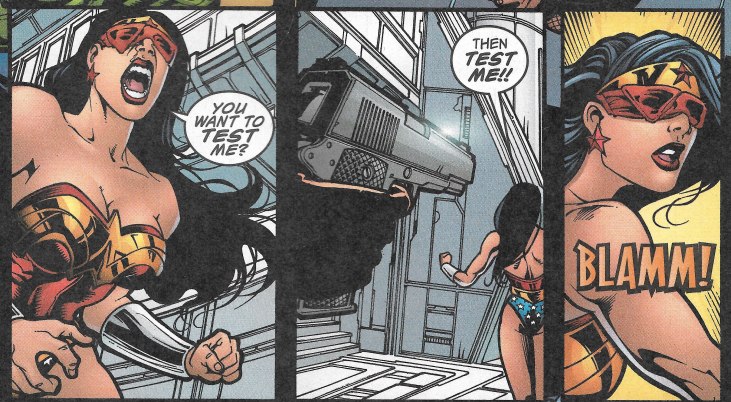 Someone isn't playing nice…or fair…and fires on the blindfolded heroine. 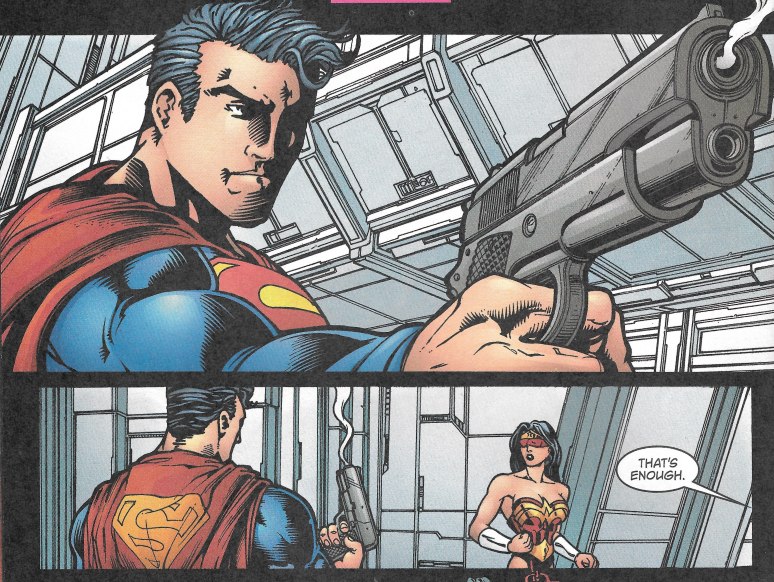 Superman! Woah. I did not see that coming. Neither did Wonder Woman, but she still blocked the shot. This is probably one of my favorite sequences involving the League and the shock value even now resonates. 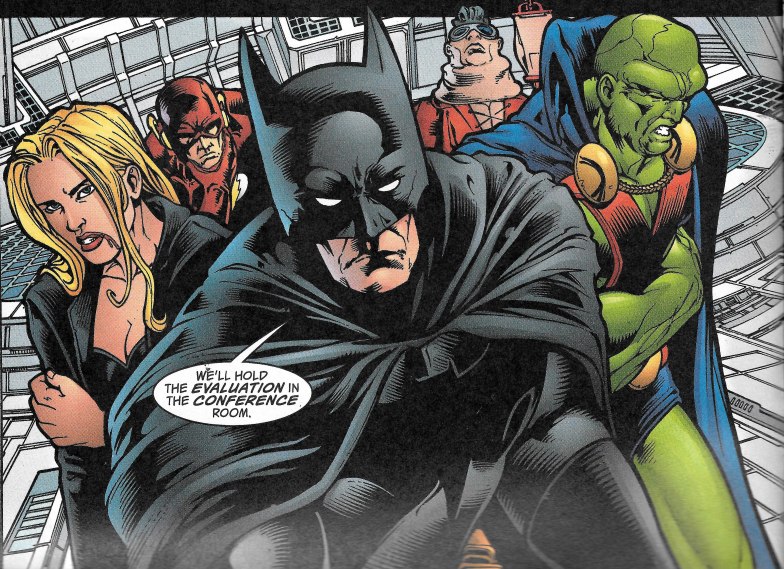 Batman calls a meeting of everyone to evaluate Wonder Woman's performance. If you are thinking something is on the line, you are dead right. You see, that blindfold is there to hide the scars Diana inflicted upon herself while fighting a resurrected Medusa.

And yes, I mean the mythological beastie that can turn people who see her to stone.

This wasn't a training exercise, this was a tryout. If Wonder Woman doesn't pass, acting chairman Batman would kick her out of the Justice League because she's a liability in combat.

Raises the stakes of all this doesn't it.

And as for Superman's shot, which Bruce couldn't do as he won't use a gun ever…well, let's see how that goes over. 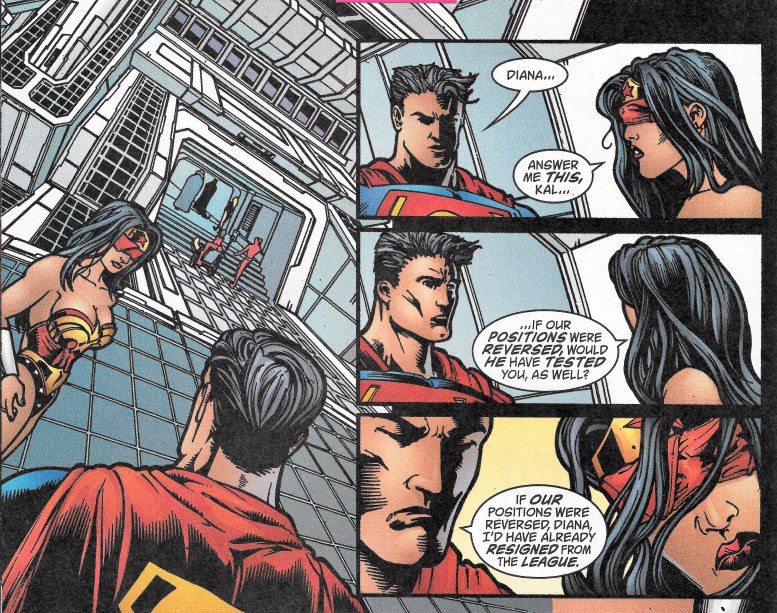 Looks like she will find no sympathy with Clark. This displeases Diana to no end. 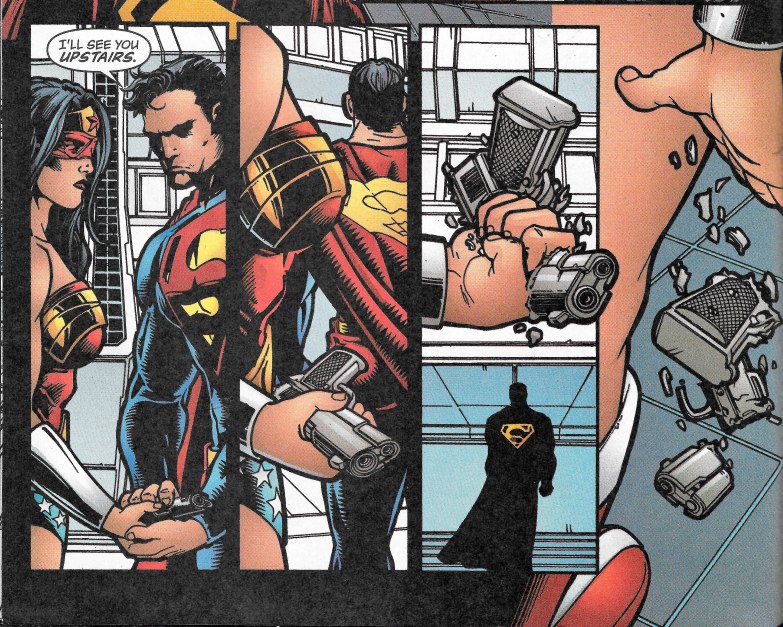 Meanwhile in Olympus, Goddess Athena stirs up more trouble for Diana while Goddess Demeter tries to act as a good sounding board. That sack has to hold the gorgon's head, no question about it. 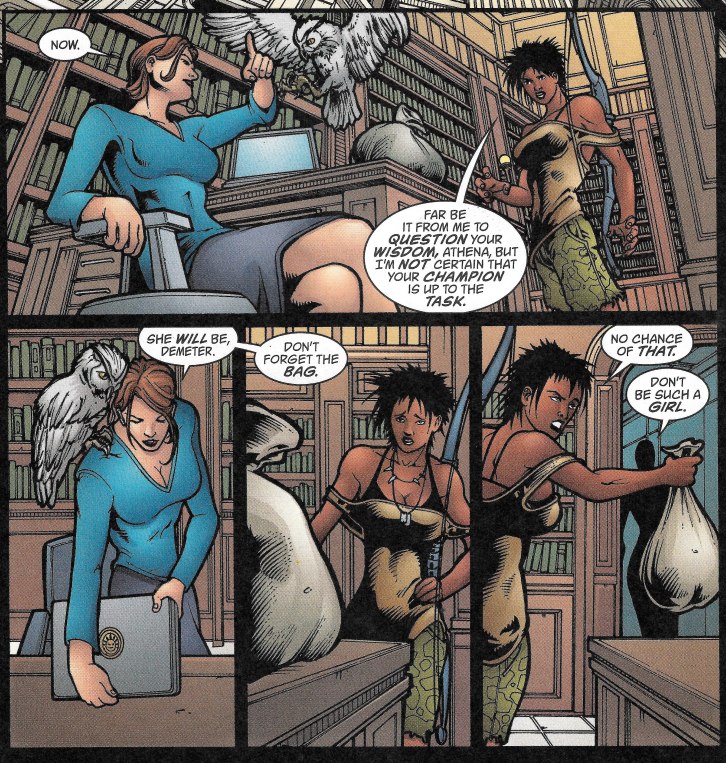 They awaken a very vexed Zeus, who appears to know what they are planning. I don't, so we'll need to listen in. 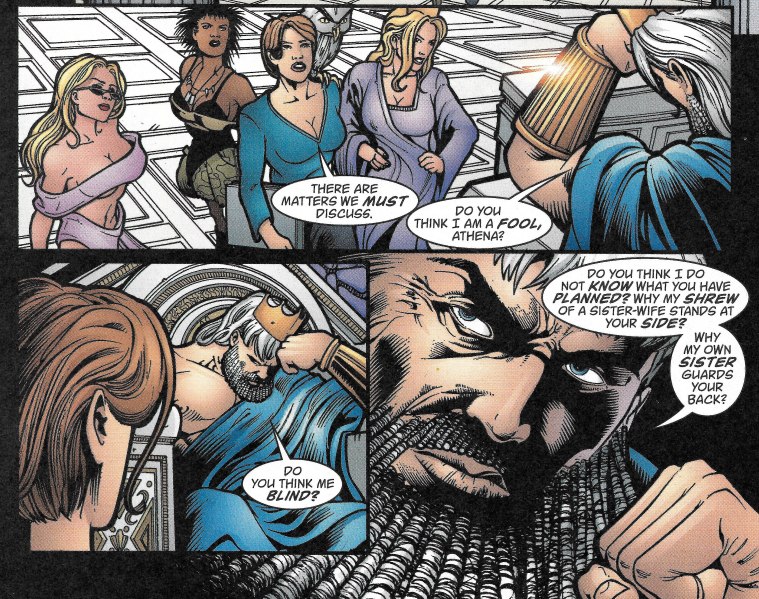 But a usurping of power, nonetheless. Zeus isn't going quietly, calling forth Briareos who looks amazingly like that arm monster we saw behind Doom's Doorway waaaaay back in issue 12. 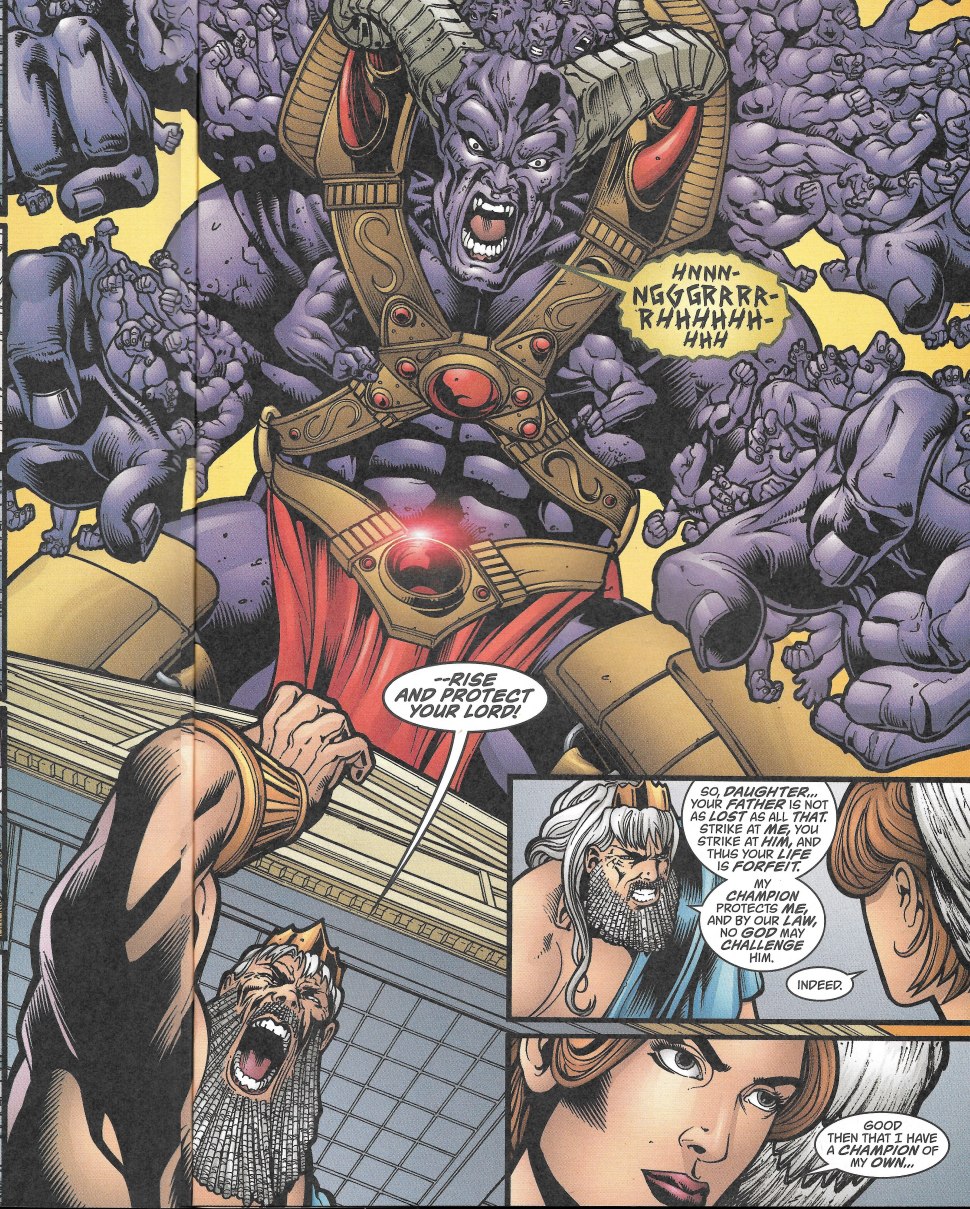 That is if you painted him Prince's favorite color and added an action figure body from the He-Man toy aisle. Still, he looks a rough customer. A rough customer that Athena appears willing to pit in one-on-one combat against a blind Amazon princess for her own gain.

Back at the JLA moonbase (yeah, it was the moonbase), the discussion rages about Diana's fitness for combat. 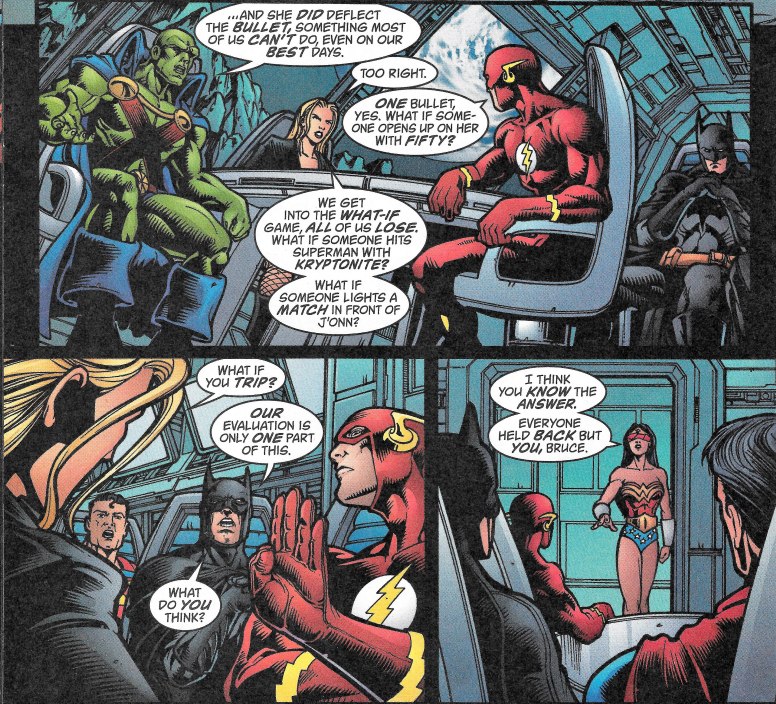 Love Black Canary's faithfulness through-out this and her reasoning at Flash's "What if..?" question. Note that Wonder Woman steps in unannounced and calls everyone on the carpet. None of them truly tried to win except Bruce. You think that might piss her off, but… 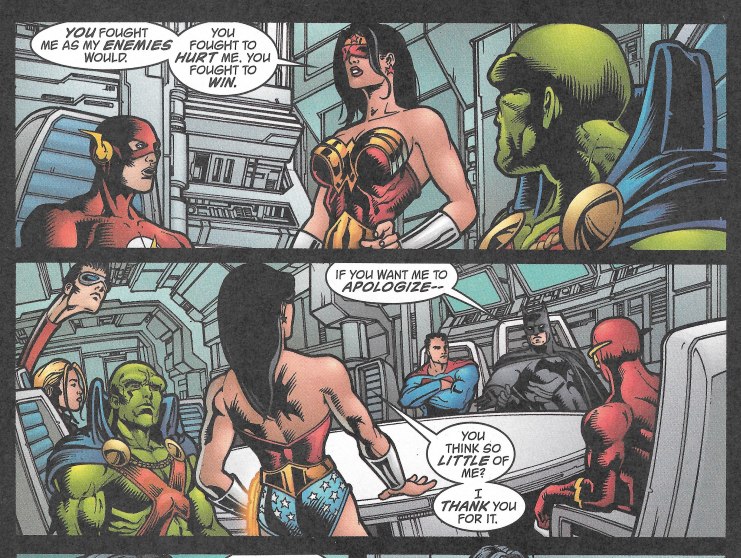 …this is a warrior and she approves of Bruce's actions. Only he respected her enough to give the trial his all. And Wonder Woman lays it out there that no matter what they decide, she knows she's fit for League membership whether they allow her to remain or not. 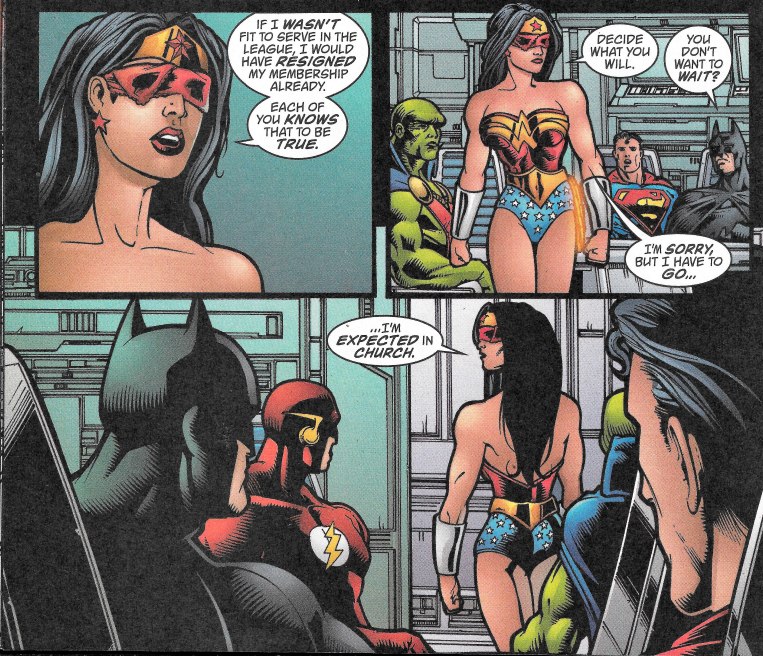 And with that, she walks out.

Then we shift to another storyline, this time on Paradise Island as this young girl named Lyta is being trained as an Amazon. 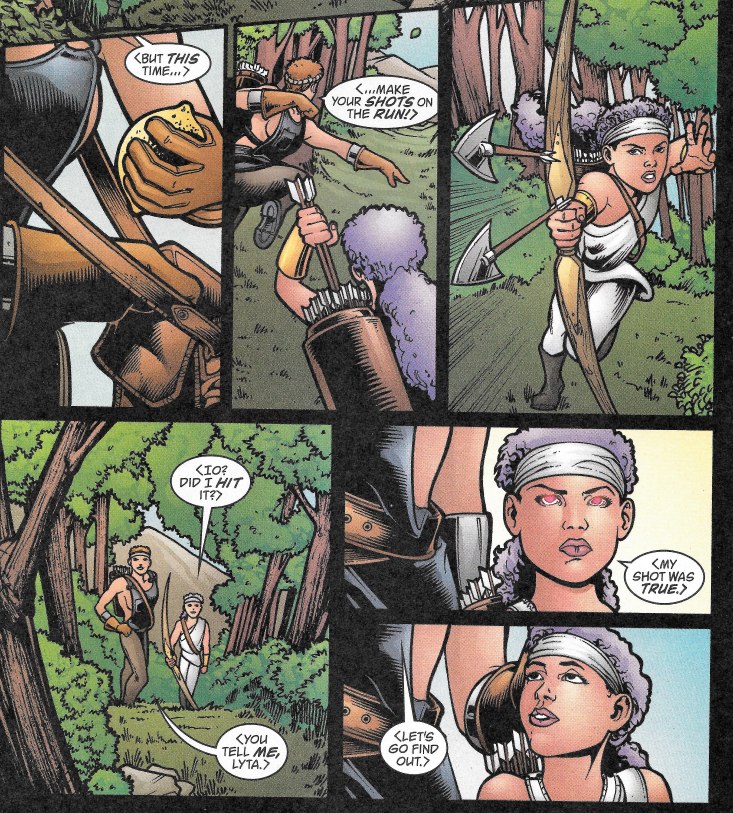 Unfortunately…this is all being seen through a scrying mirror by her mother, and I'm going to state for the record that I don't know who this is. It might be Circe, although last time I saw her she did not have purple hair. Or it might be another of Diana's stable of evil witch women. Who knows? *shrugs* 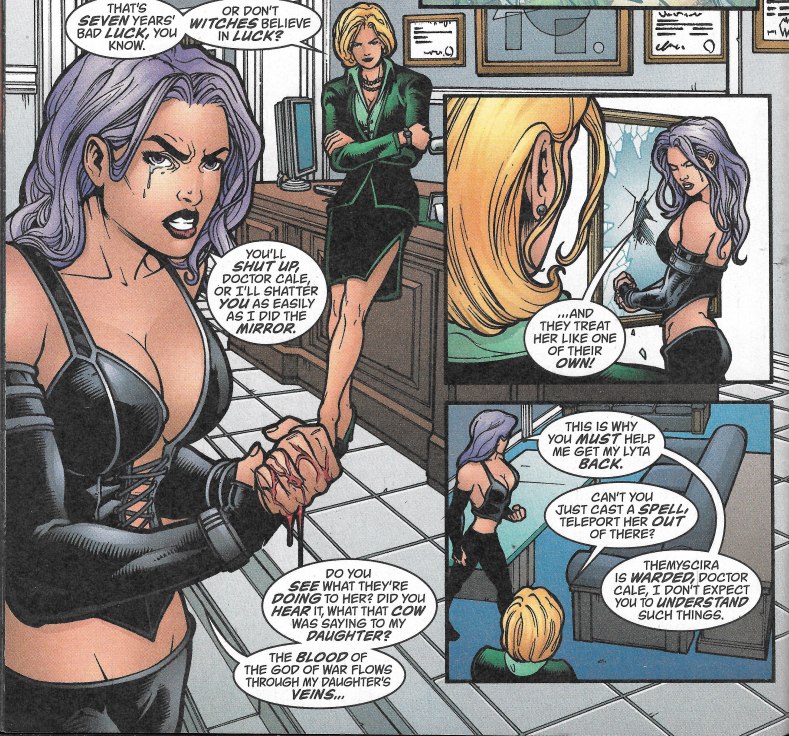 What I do know, and if this isn't readily apparent by now, is that Rucka can craft some pretty great storylines that jive with the theme of the Wonder Woman universe. I am intrigued by all of them. It really is no wonder (heh) that he is currently scribing the new adventures of the character in the DC Rebirth line. I'll stop gushing and get back to the review, but already I am saddened that this is the only Rucka book that wandered its way into The Crapbox. *tear*

Oh, and the next page confirms it is Circe. And if she can't use force or magic to obtain her daughter, then she will put the power of the American court system to seek what she wants. 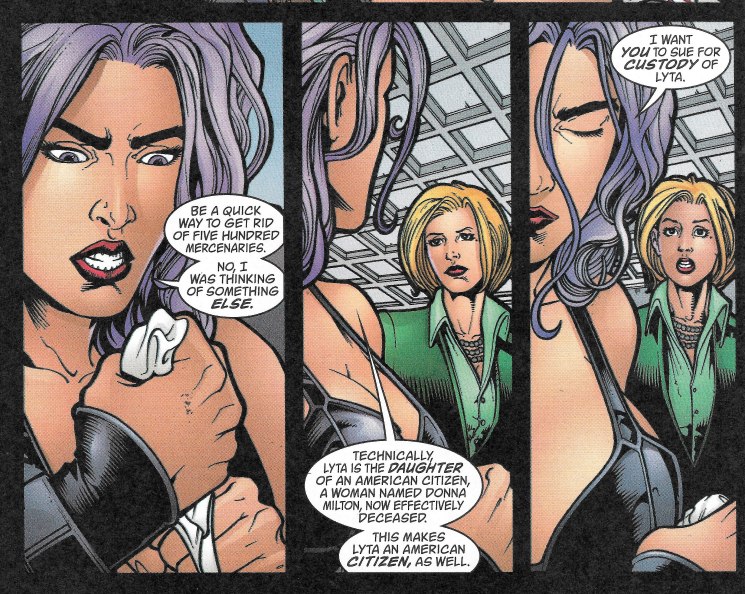 Next, Rucka pulls on our heart strings as we follow Diana to a memorial service. We learn that Diana is there to eulogize a child by the name of Martin, who was a friend of Diana's, and was apparently targeted by Medusa. And we all know what his fate must have been. 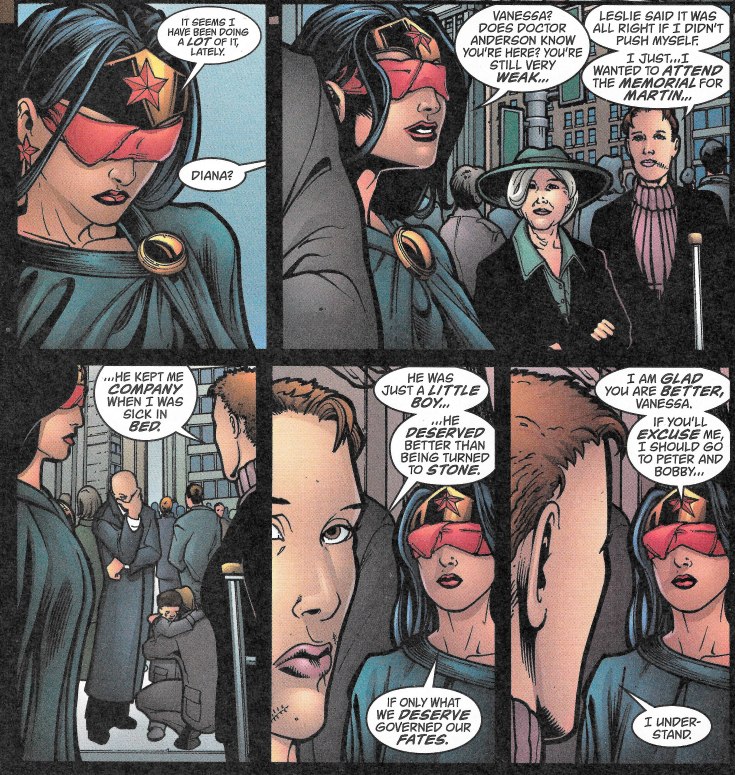 The only question I have is…Is the statue on the top the actual boy turned to stone? Or is it a statue of the way the stone boy looked after being turned into a statue? Either way, that is just sad and messed up, man. 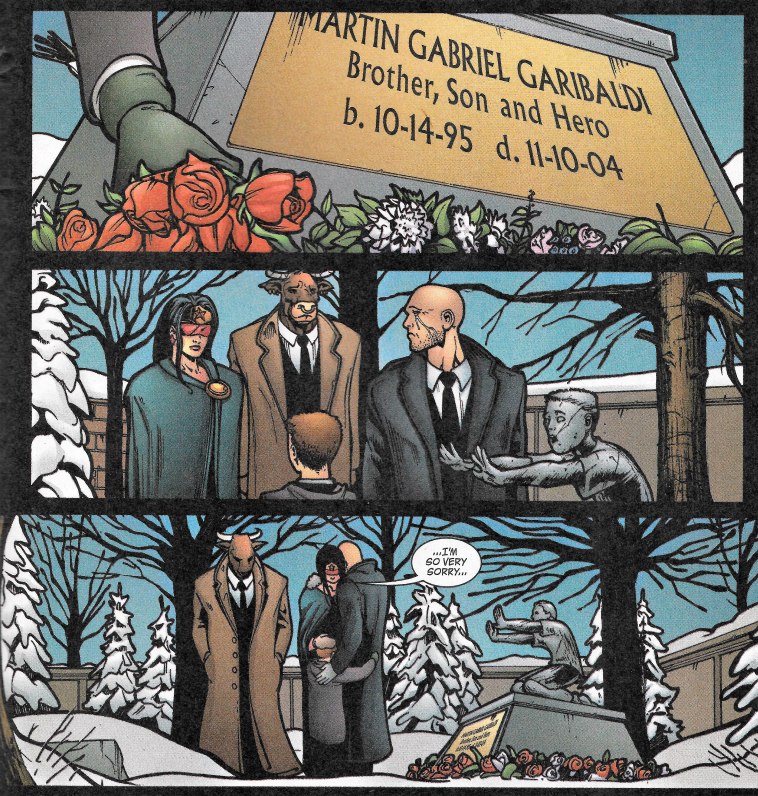 No sooner does Diana make it back from the memorial service than Aphrodite appears and suddenly she is swept off to Mount Olympus and told to ready herself for combat. 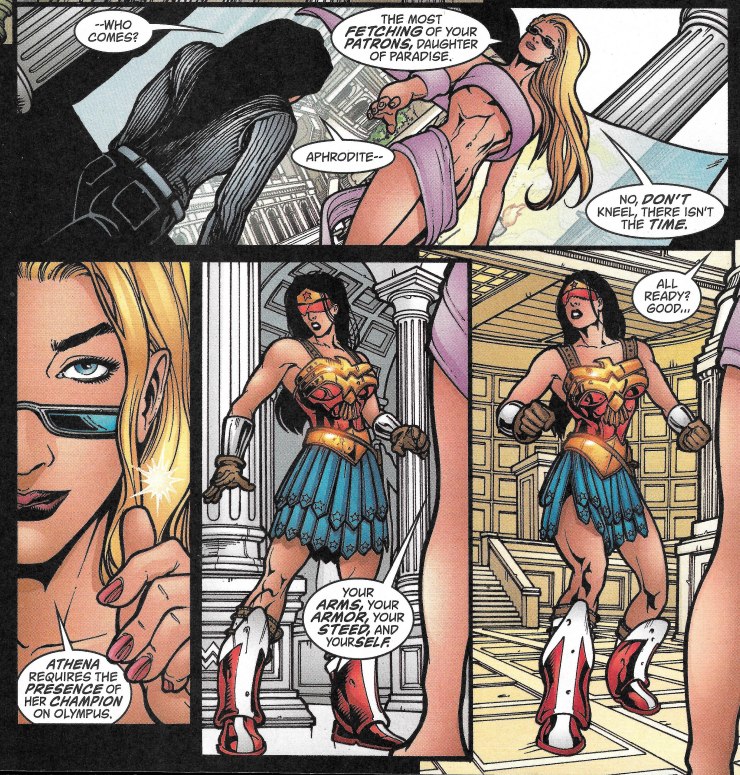 And even with her sight, I believe Wonder Woman would have a bit of difficulty with this fight. 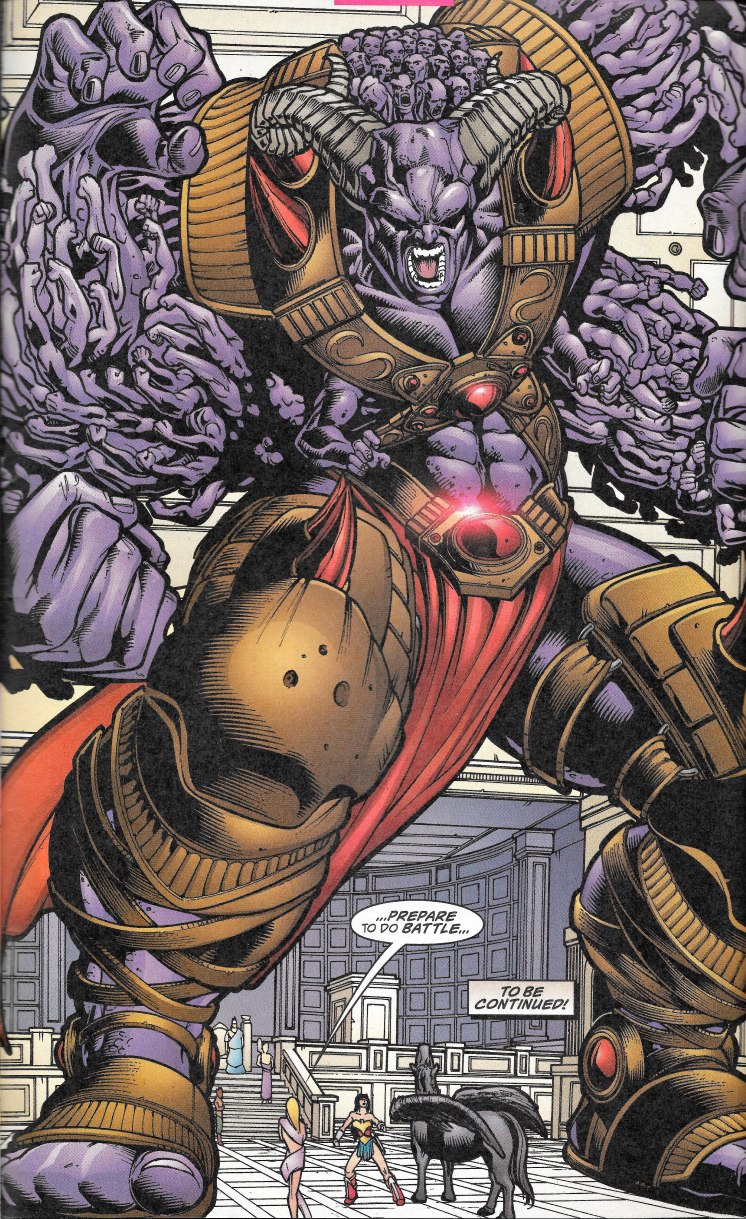 Great issue! Like one of the best I've come across for Wonder Woman. Love Rucka's writing style and the art by Raiz and Snyder is well done. The supporting cast looks interesting and there are enough story hooks for next issue and issues beyond for me to WANT to buy more Wonder Woman. These have been traded, so if you want more, all you need do is head to the comic book store or Amazon.

I'll see you there!
Posted by SonOfCthulhu at 2:23 AM