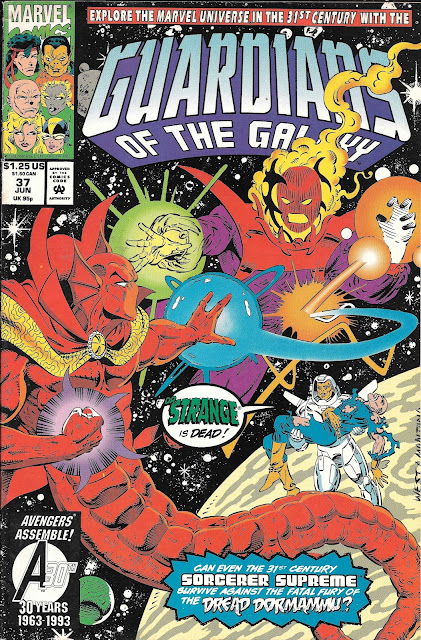 Maybe there is hope after all?

"Time Bears All It Sons Away"

Here is what the Crapbox likes to see, but seldom gets the chance: Improvement.

Seven issue into Gallagher's run and we have a team of heroes acting like a team. You know, formulating plans, acting in concert, and backing each other up. Great job, guys!
And by guys, I mean Gallagher and the editorial staff. We also have something else that is welcome: 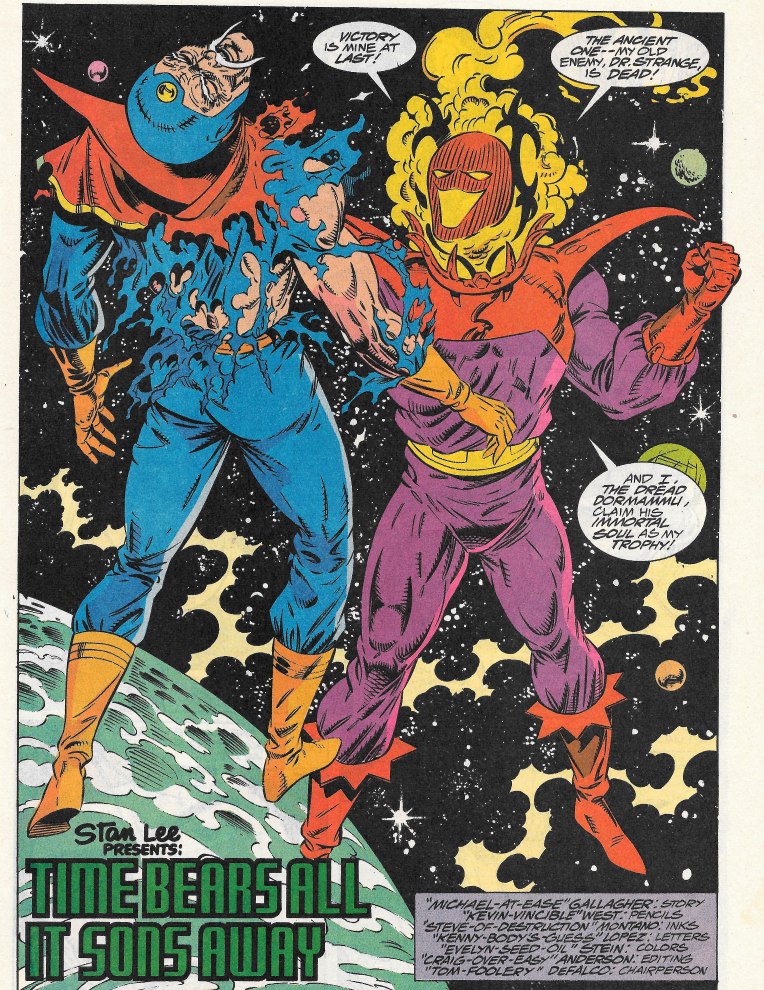 No, not a dead version of Dr. Strange in the future all fossilized like the original Ancient One. I mean a bad guy. A recognizable, easy to despise entity with understandable motivations and an agenda that can be defeated. Someone to root against.

Not an entire race of lizard people that we know are mostly evil, but that no clear goal of winning can easily be established. Killing them all makes the heroes tainted, defeating them only to let them go again isn't satisfying and there is little in between that works as a good ending.

It is worth a mention that Dormammu's first act is killing Dr. Strange, his age old enemy who's kept him at bay for several centuries. That's something else we have here: stakes. Something at risk. Something more than just a ship that the Guardians could easily go buy another of. Nope, Dormammu will be after our entire dimension.

And this is the rag-tag bunch up against him:

Wait! Who are those guys? Those aren't the Guardians. I see Ghost Rider (in space, so here may be called something like "Space Ghost Rider"), Firelord, Aleta-Starhawk's better half, someone doing Nightwing cosplay but getting the colors all wrong, and hipster-mod Santa.

So obviously there have been some cast changes since last Crapbox checked in on these guys. Who hasn't left? Talon, the cat dude who is being mentored by this half human/half snake would-be sorcerer supreme, Master Krugarr.

Well, he would be the sorcerer supreme if he could break through those bands holding him hostage. More on him later. 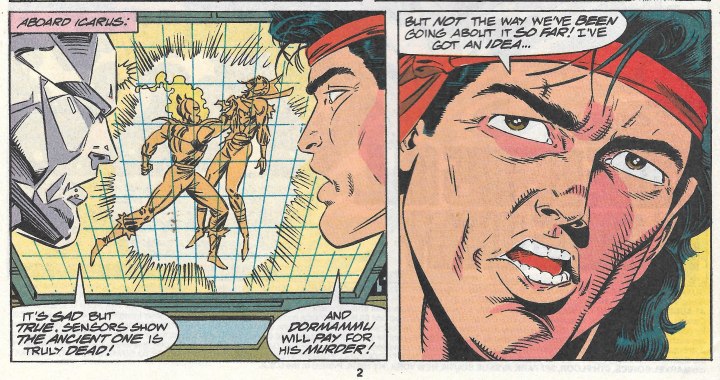 Okay, maybe not a "plan." More like an "idea," which is close to having a plan, but not exactly the same thing as having an actual plan. Whatever. Still, it's better than what we saw the issue 31.

Which was, to be sure, no plan.

So what's our plan? Well, we start by teleporting Dormammu away from Dr. Strange's body. 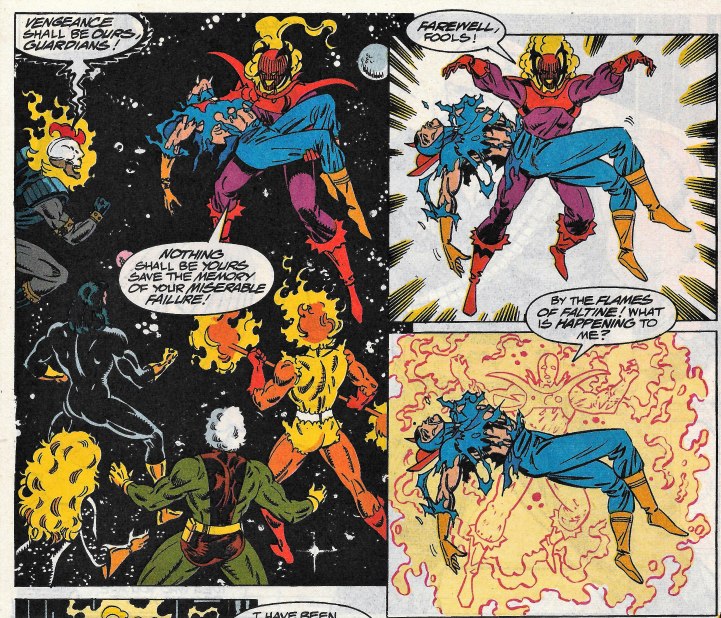 When he arrives, disoriented and confused in our hanger bay, we punch the crap out of him. (This is suddenly not sounding like much of a plan.) 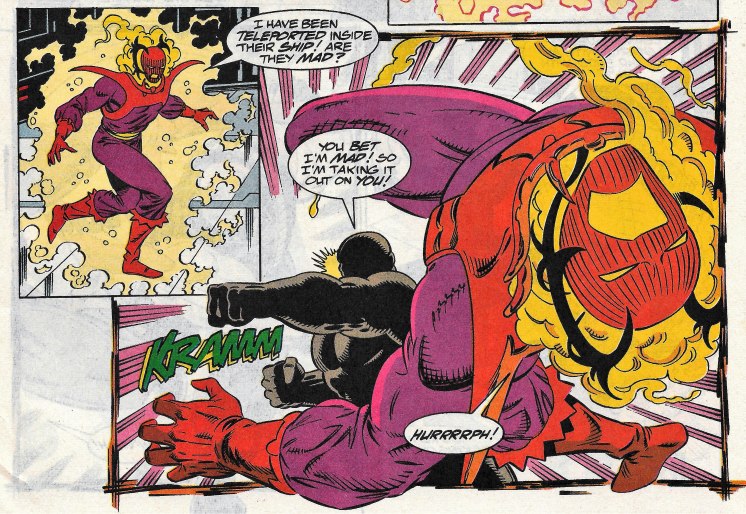 At least with Charlie-27 they picked the right guy to be delivering the smackdown. Sadly this won't end well because as soon as Charlie-27 gives old Dor-mammy an opening, the mage will have him trussed up like a Jovian Christmas turkey. 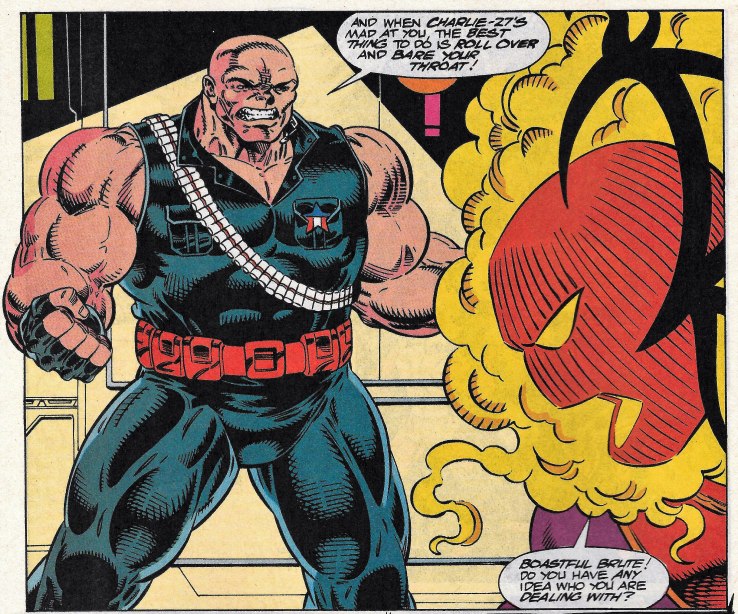 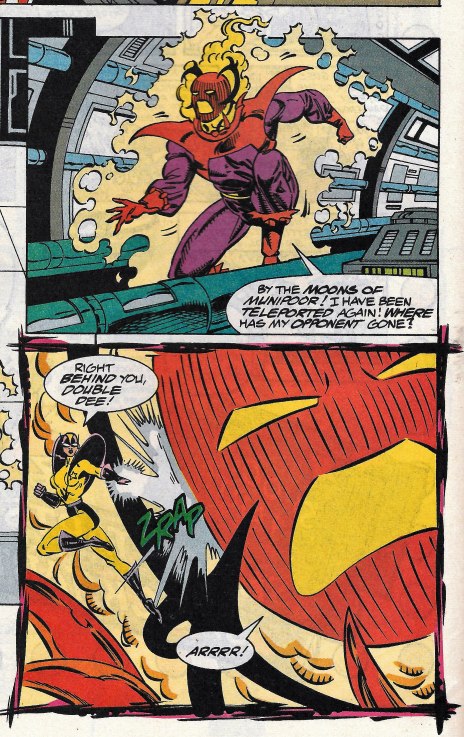 …Major Victory (that is SUCH a horrible name) teleports Dormammu again, this time to face a much smaller adversary… 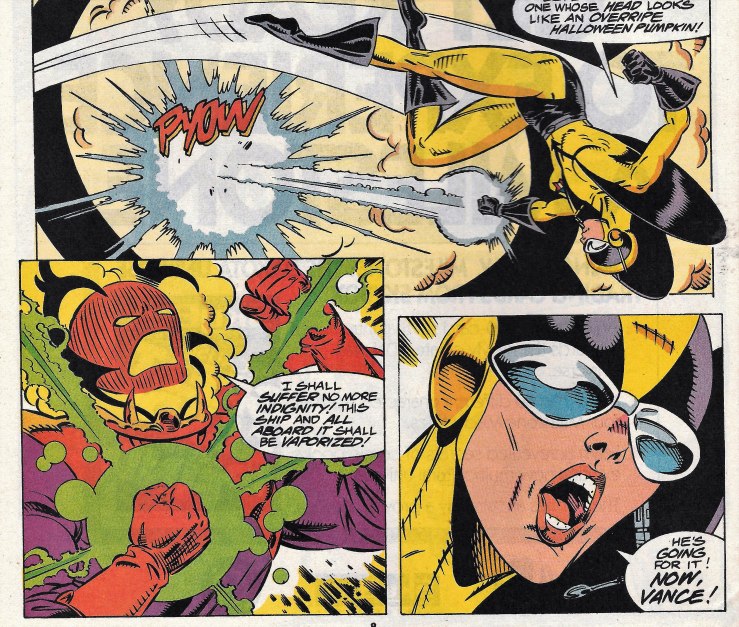 With a zrap-zrap here and a zrap-zrap there, Rita DeMara (a/k/a Yellowjacket) gets Dor-shamu all riled up and blasting without thinking, a setup so he can be teleported… 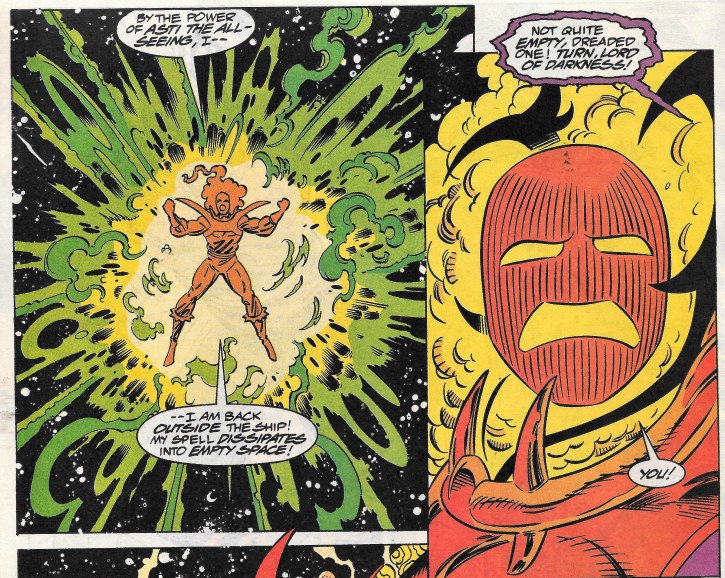 …back outside the ship. Is it just me or does Dormammu look like he's frowning in that last pic?

If he isn't, he should be as that last dissipation of energy freed the one enemy Dormroom might need to worry about: Dr. Strange's apprentice, Krugarr. And he's none too happy about Dormammu having killed his Master. Can you say "cosmic battle?" 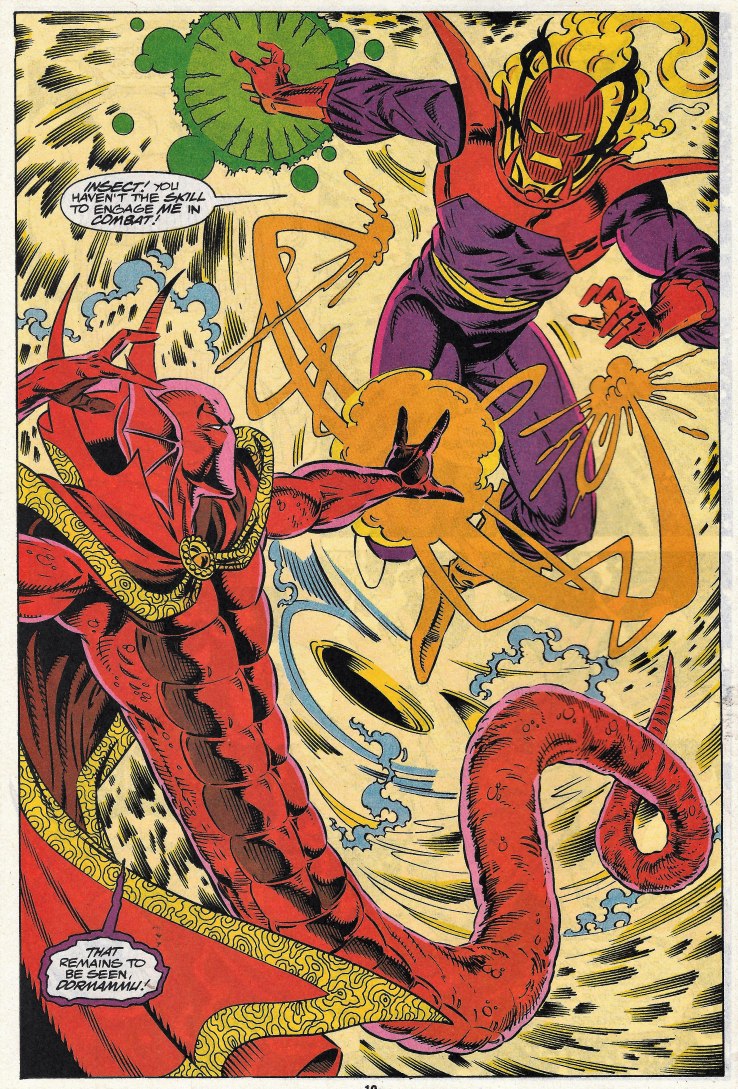 (Side note: rumor has it that Krugarr and several others from THIS version of Guardians will have brief cameos in the new Guardians of the Galaxy, Vol 2. I'd caution you to not blink if you want to see them)

While all this is going on, Dr. Doom's mechanizations to acquire the Realiteevee thing-a-ma-bob or find the Inhumans or some crazy thing…are being spied upon by a figure in green (LOKI? I wish! No chance of that) with a bunch of followers including this weird patchwork alien called Composite. 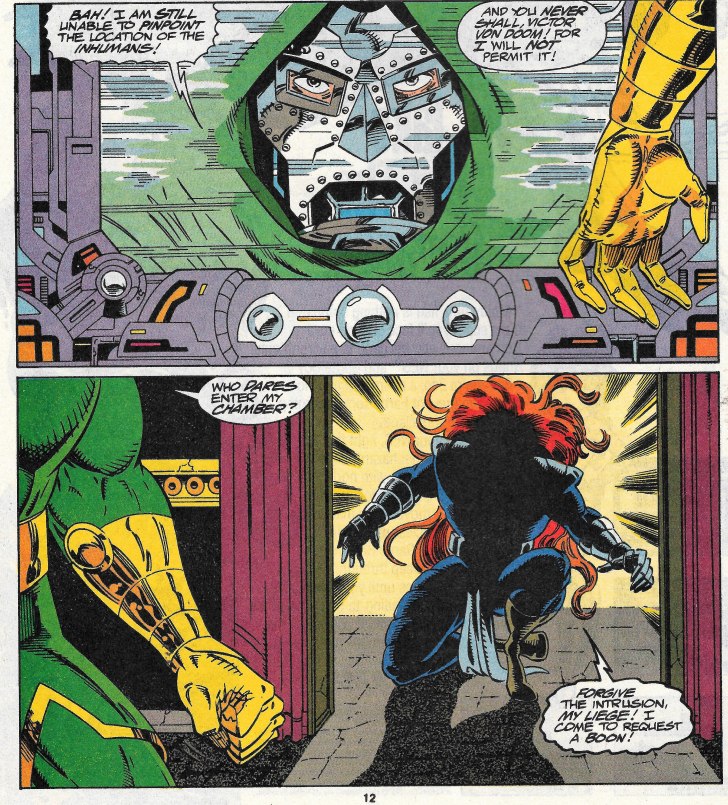 Including it here does break the action for two pages and to no real effect other than as a Coming Attraction reel. I'm glad it's over in under eight panels though, as I couldn't really care less.

We go back to the battle in progress. Vance has pulled all the combatants out of the way, leaving Krugarr to handle Dormammu. 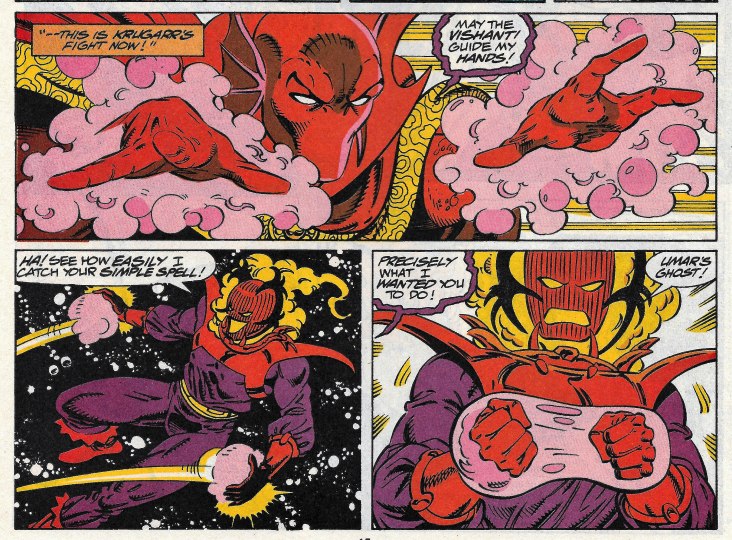 I liked this scene. So much so that my latent speciesism is overridden. It is just hard to root for a character who doesn't have legs or a butt. I had the same problem with Disney's The Little Mermaid.

The battle starts getting rough, and just when you think Krugarr might have bitten off more than he can chew… 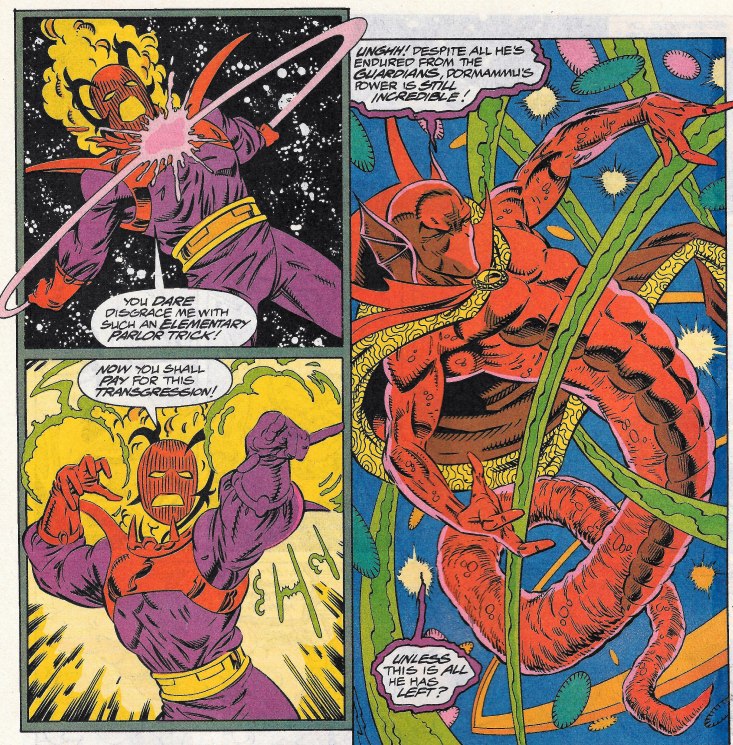 …Talon decides to lead a paw. 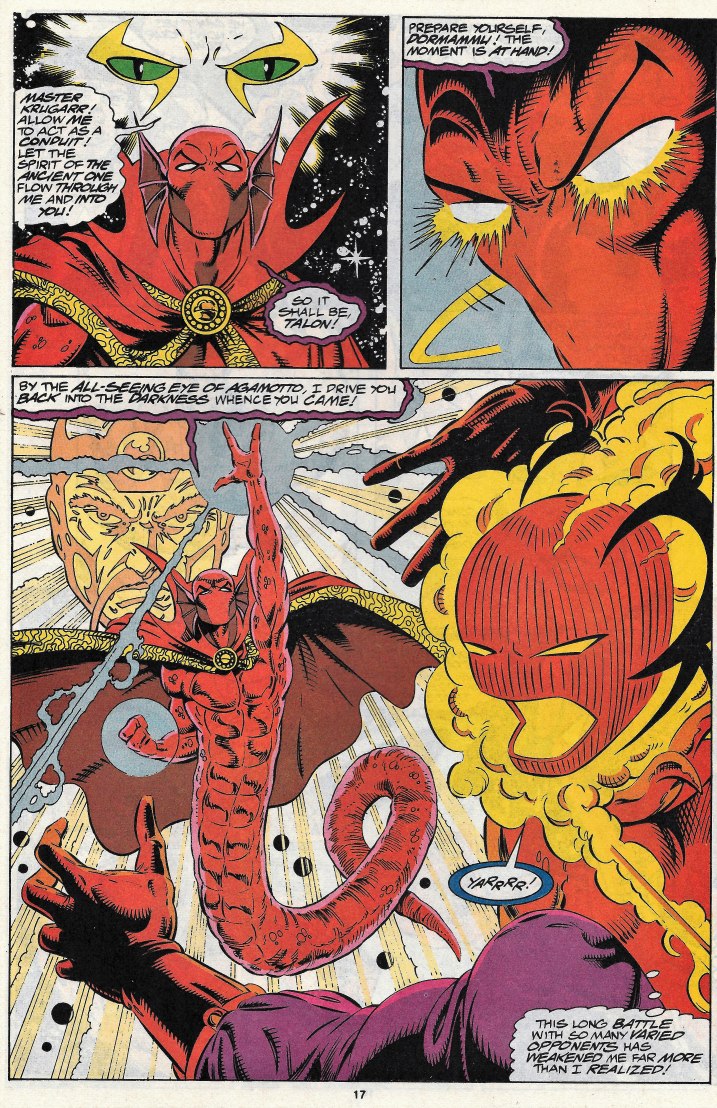 He thinks happy thoughts and sends positive vibes to his Master, Krugarr. 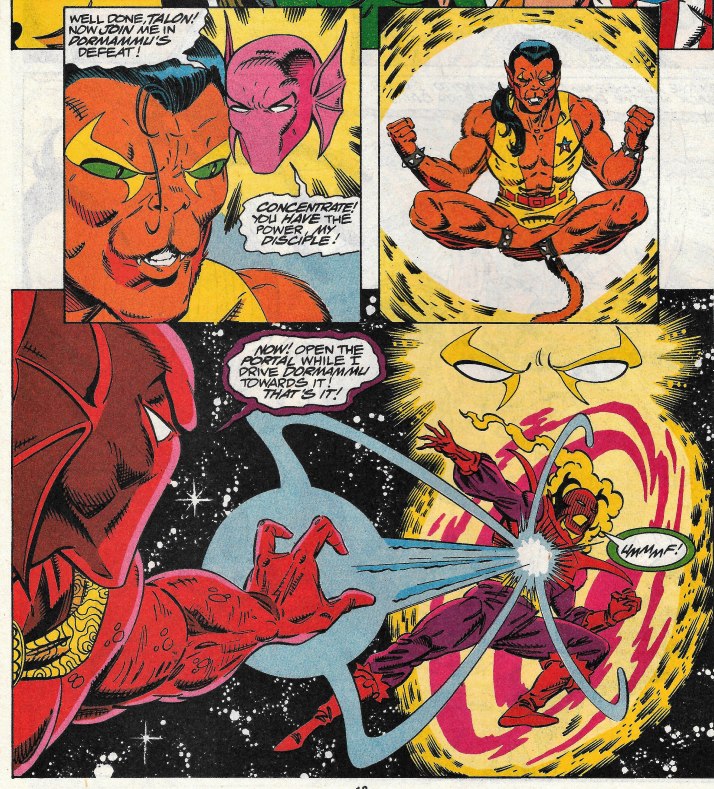 With a little goading, Talon starts floating and really pouring it on. The rest of the Guardians are in shock, even the ones I haven't met yet. 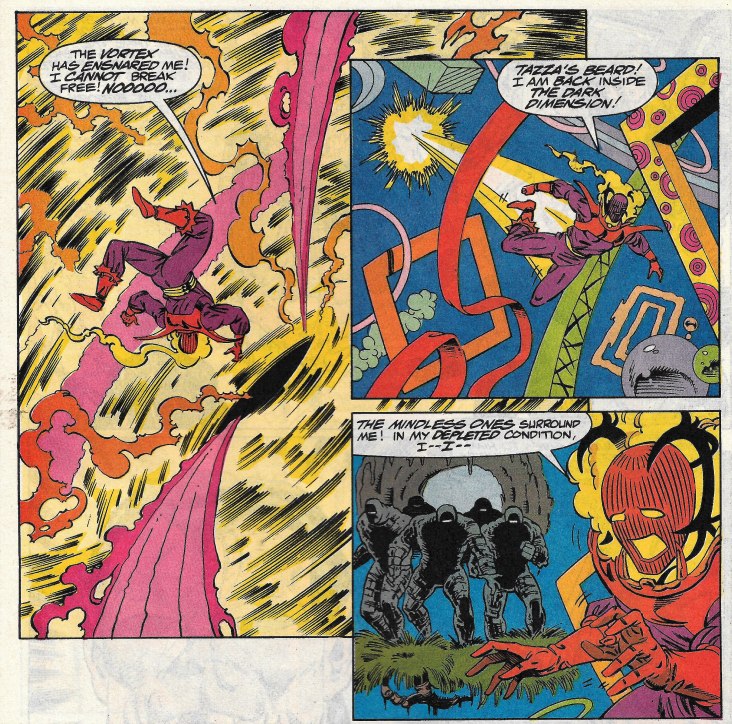 Bub-bye, Dork-mammu! You've been pushed into the cosmic equivalent of a flushed toilet bowl. Nooooooo….

And he ends up outside his own energy shield in The Dark Dimension, meaning he's about to get pummeled by the Mindless Ones. I think Dormammu could use a bit of humbling, so kinda glad about this.

Krugarr teleports to the Guardian's ship to retrieve Strange's body. He is already wearing Strange's Orb of Agamotto and he gives Talon the original amulet that the Ancient One gave Strange those many hundreds of years ago. It is a neat torch passing and a sign that Talon may one day succeed Krugarr as the next Sorcerer Supreme. 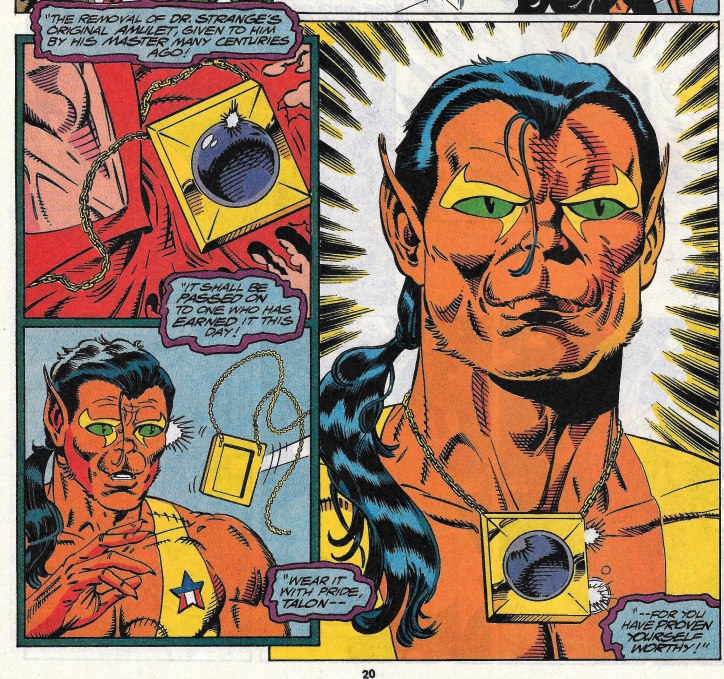 As we start the wrap-up of this adventure, Martinex asks that Krugarr teleport himself and the rest of the "Galactic Guardians" back to Mainframe's homeworld. He bequeaths his ship to Vance and the Guardians of the Galaxy. On a side note, surely he could have picked a name more removed from his former group.

Before teleporting out, this happens. 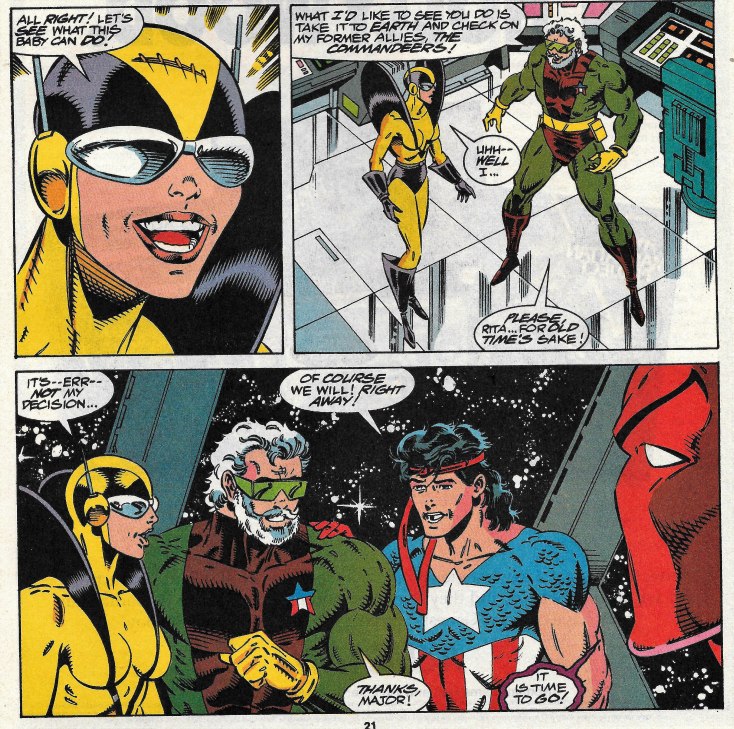 A bit of context: Rita/Yellowjacket is from our timeline and has travelled into the future to join the Guardians of the Galaxy. So what she learns next is going to shock her a bit. 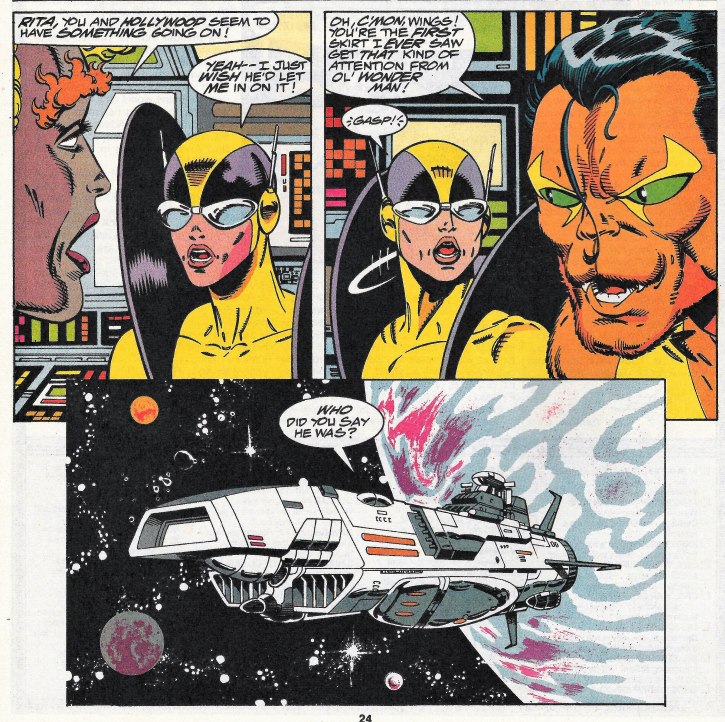 Yup, the guy I was calling hipster-Santa was indeed Simon Williams. Still alive after all these centuries and going strong. Pity Rita only learns about it after they have teleported out. 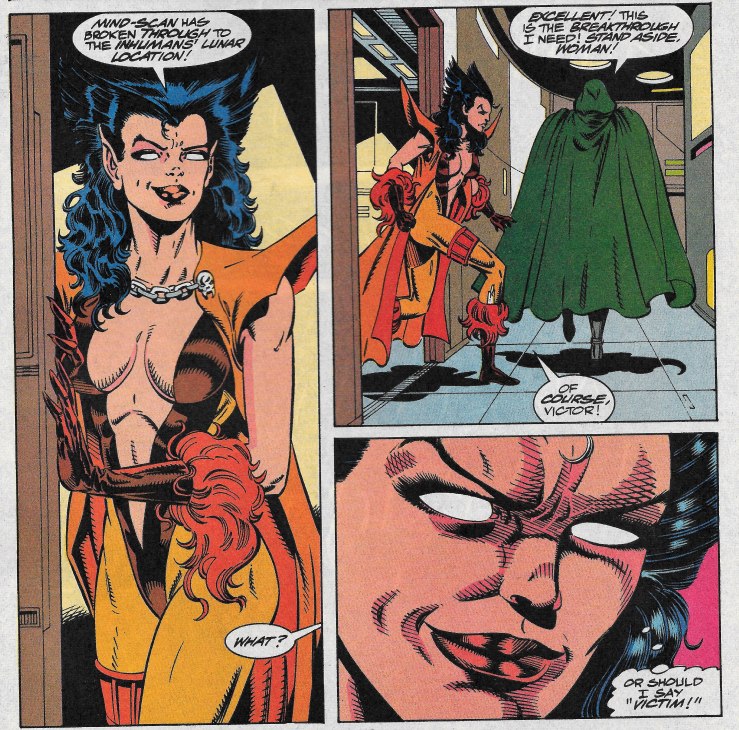 Sexy female Wolverine shows up with the Doc Doom subplot we've all been dying to forget about.

Rancor! That's her name. And she smells just as fowl as that name implies. Sadly, the writer allows her to get the jump on Doom (or at least it appears that way in the book's ending.) 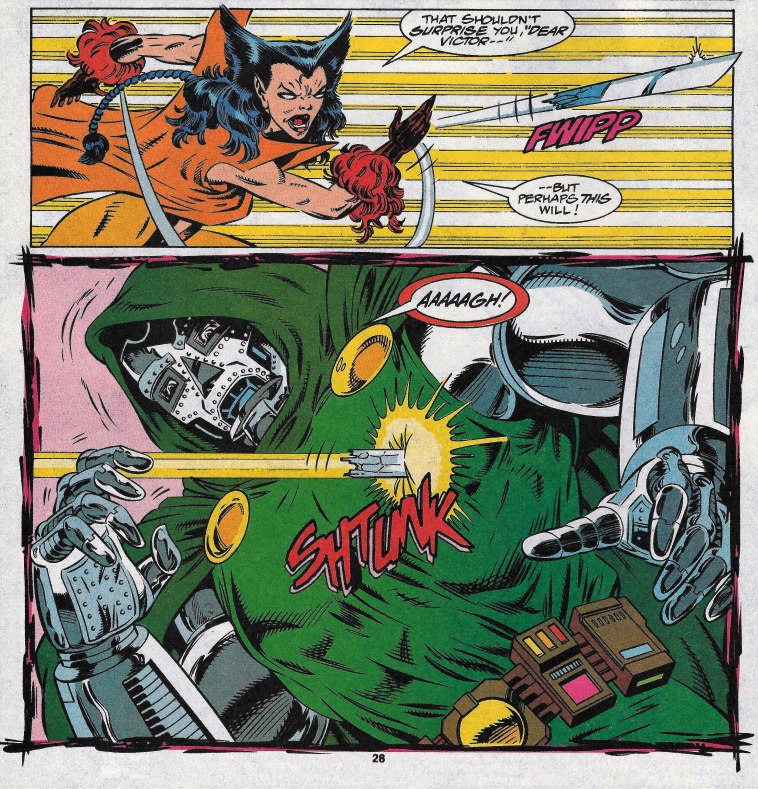 Pretty sure he's got about 20 ways to make that not happen, including but not limited to being a Doombot. But whatever, issue 37. You've amused me for 20-odd pages. What is a few pages of meh at the end? 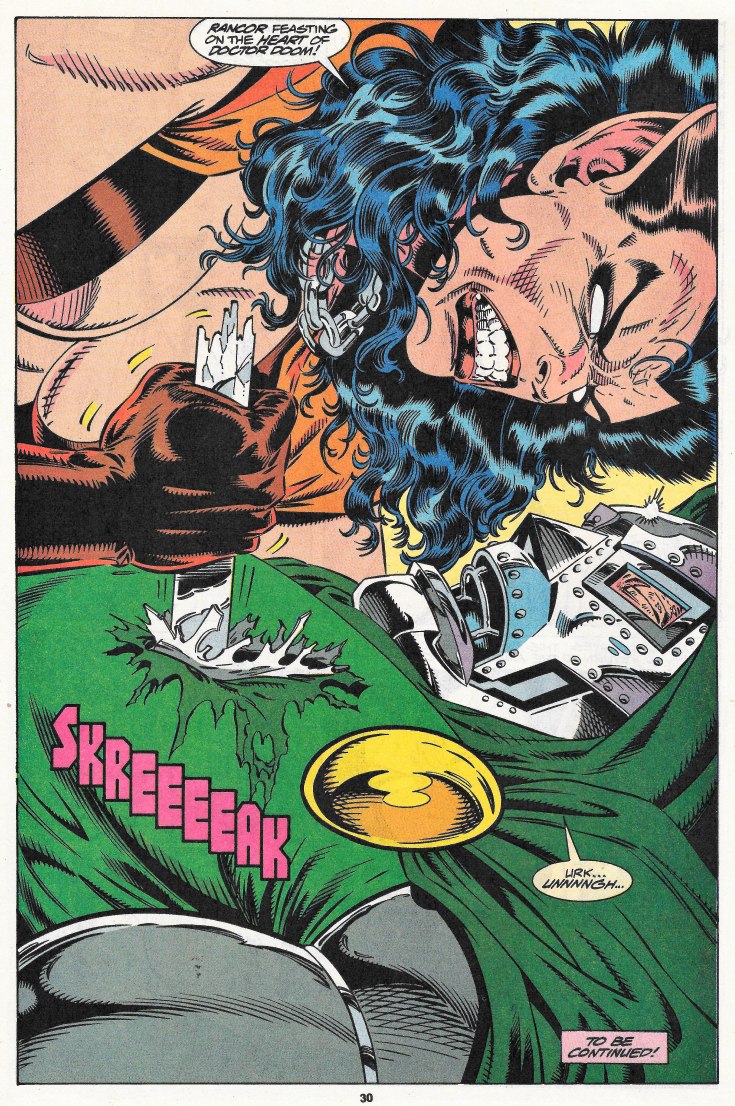 Yah, we all know that's not happening.

I love a book that improves and this run got to an okay point somewhere before six issue. I can see how fans, though few in number, would have hung in there and awarded the book enough sales to make it to the 60th issue mark.

Remember to watch for some of these folks as window dressing in the new movie. Someone should probably make up some bingo cards
Posted by SonOfCthulhu at 2:47 AM