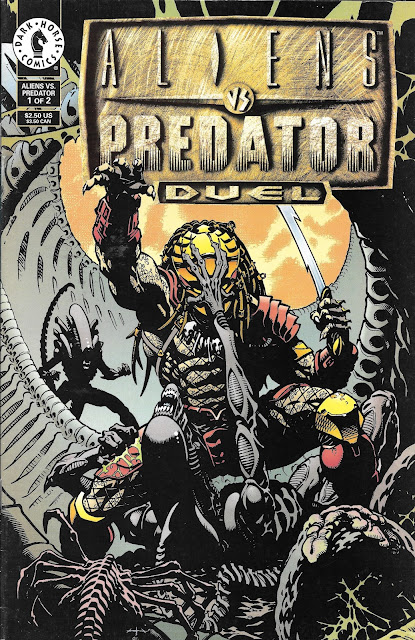 Now we move up two years on the ticker from the Colonial Marines series and find this gem: part one of a TWO issue series of Aliens vs Predator.

Aliens and Predators squared off A LOT in the comics. My Comics Values book from 2005 shows SEVEN series where the two went mano-a-mano since 1990. Given the quality of the two series that fell into the bargain bin, I'd be inclined to think each of these would be worth a look.

Duel takes us back to Ryushi, years after the first Aliens vs Predator book wraps up with a squad of marines caught squarely in the middle of the two factions. It opens in a very unorthodox manner, taking something that happens in the middle of next issue and using it as our framing device to tell how we got here.

Oh, and did I mention? It starts with two grunts trying to escape from some lethal Aliens.

Appears the one in the rear, France, is low on ammo. Then the one in front trips and slows them both down a bit... 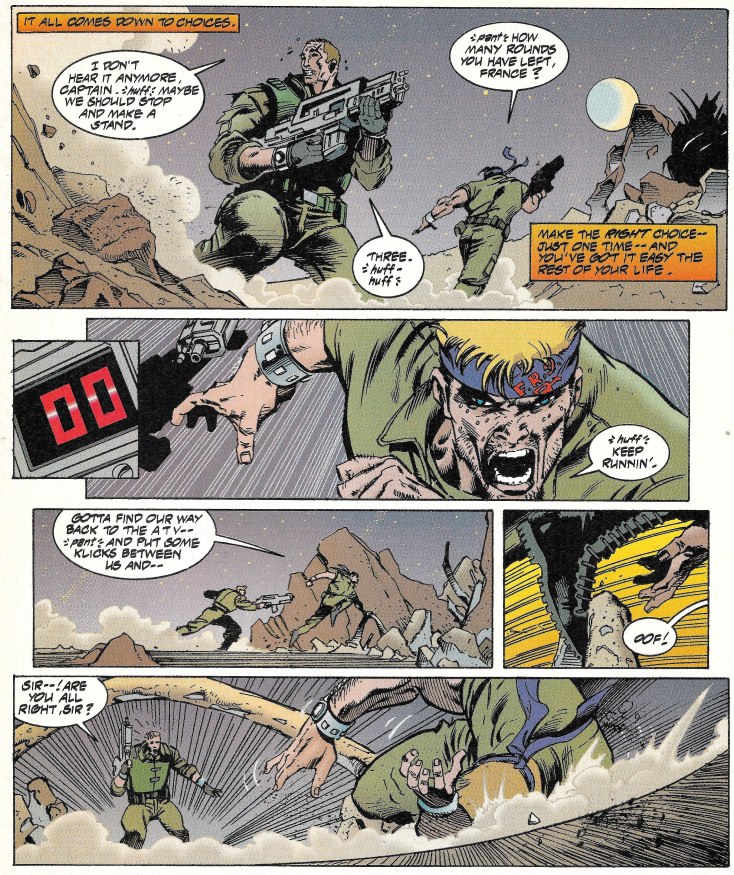 Something pops up behind them and France blows his wad… 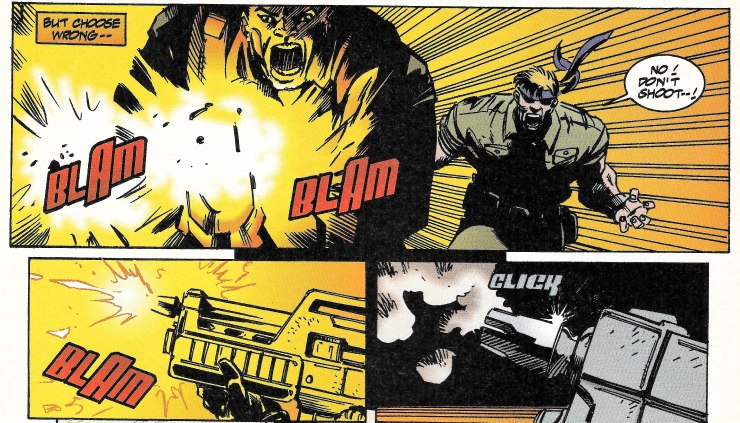 But it isn't enough to stop what's behind them. Beautiful panel layout though. Just amazingly stylized and clearly conveys the mystery, terror, and brutality of being hunted by Aliens. Bravo Javier Saltares and Jimmy Palmiotti. 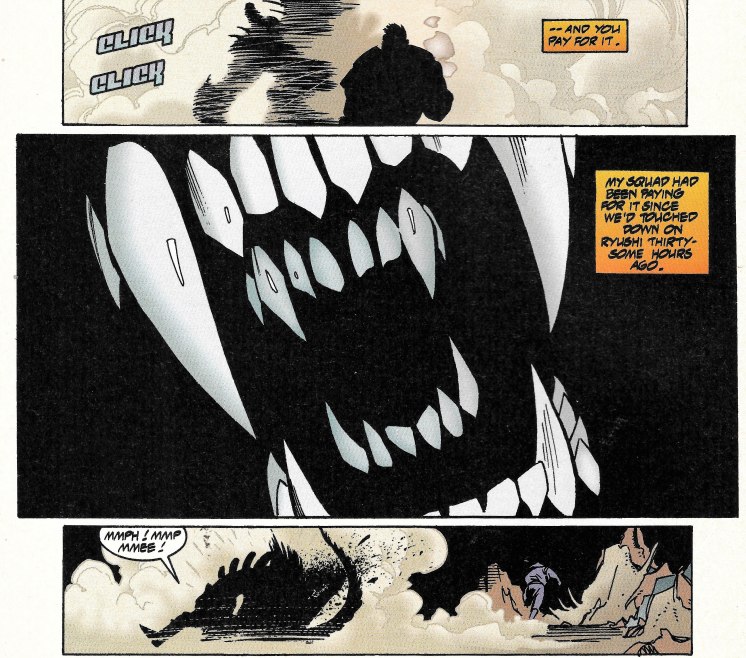 The CO escapes while the Alien feasts on France, but his troubles have only just begun… 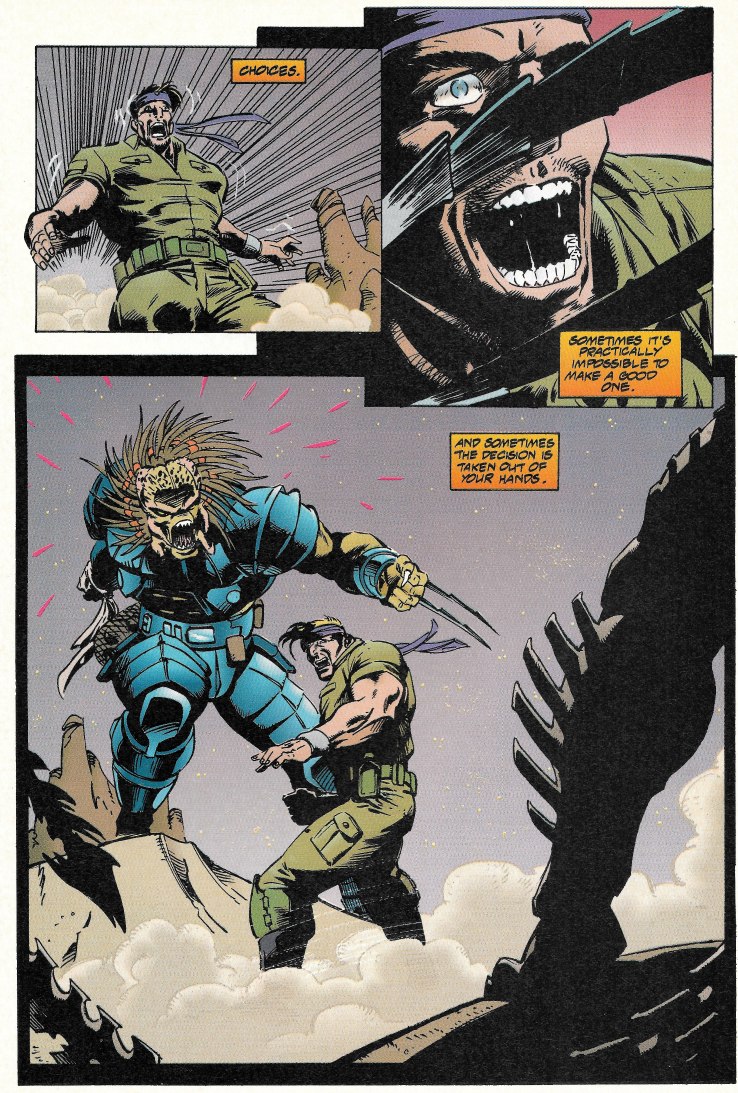 We then flashback without preamble to how we got here and the entire squad of marines these two were with. It begins with a distress signal. Much like the original Alien movie… 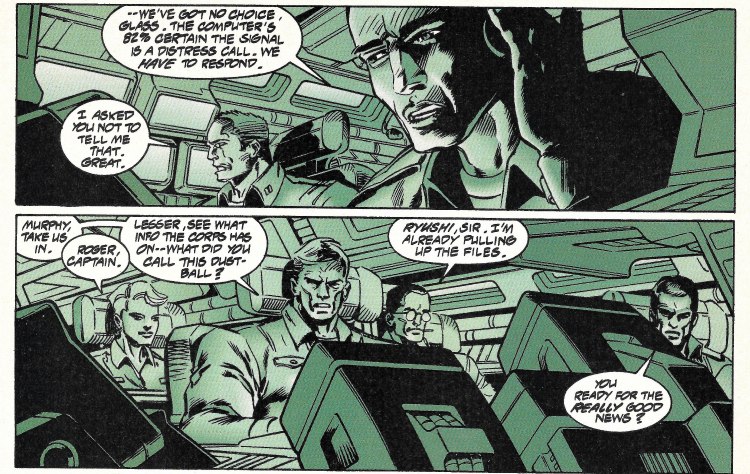 …the really good news: the distress signal is of non-human origin. We are headed back to Ryushi again, the planet where the Predators and Aliens last squared off and human got caught in between.

This squad will be the ones in the middle this time. We barely get to meet any of them but let's listen in on the briefing on Ryushi, just to see what's become of that sandpit… 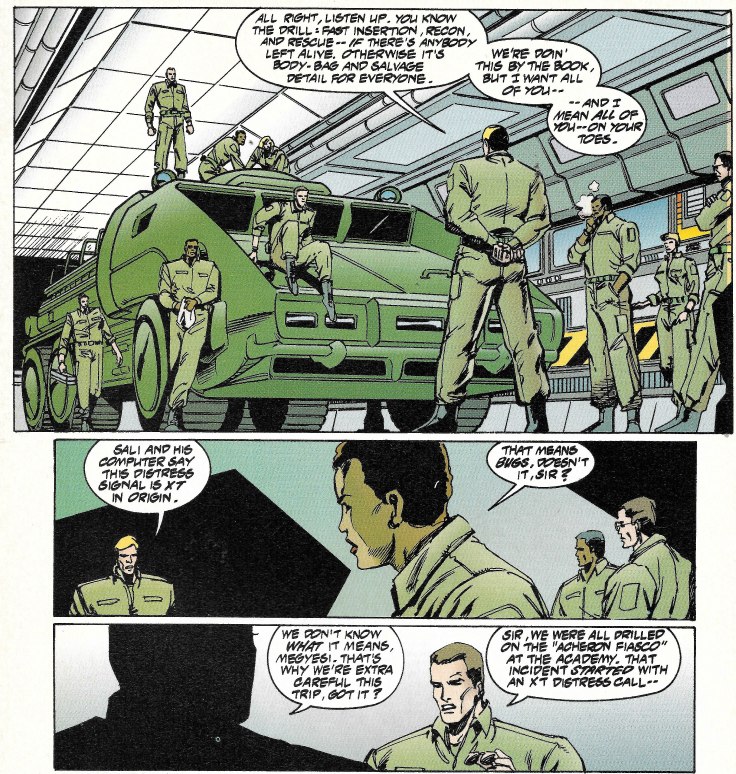 So Machiko is someone down there, the sole human left on the planet. If I recall correctly, she left on good terms with the Predators owing to how well she handled the Alien incursion last go around. Wonder if she will make an appearance this issue? We'll see, I suppose. 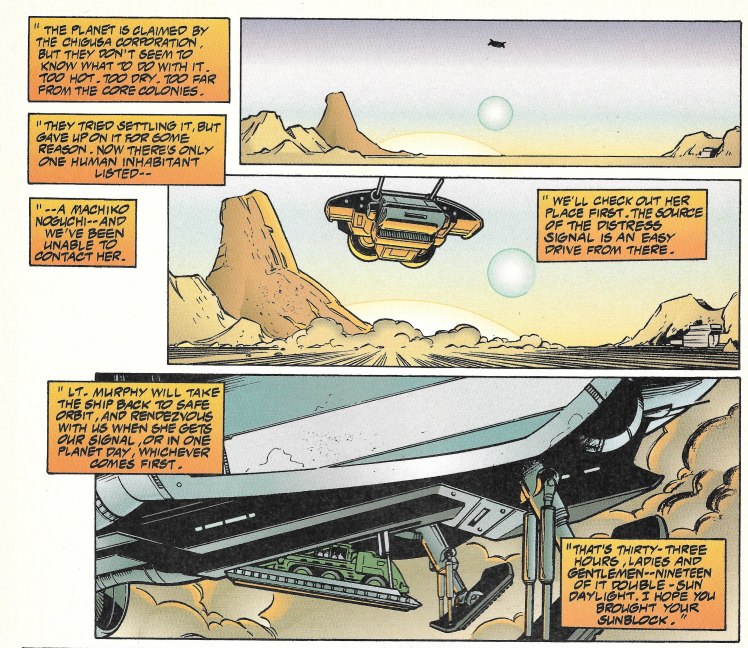 The squad fails to find Machiko at home. From the looks of things, she has high-tailed it out of there a long bit ago. So next up on the list of tourist stops is the location of the distress signal, and to quote a different sci-fi frachise: "I've got a bad feeling about this." 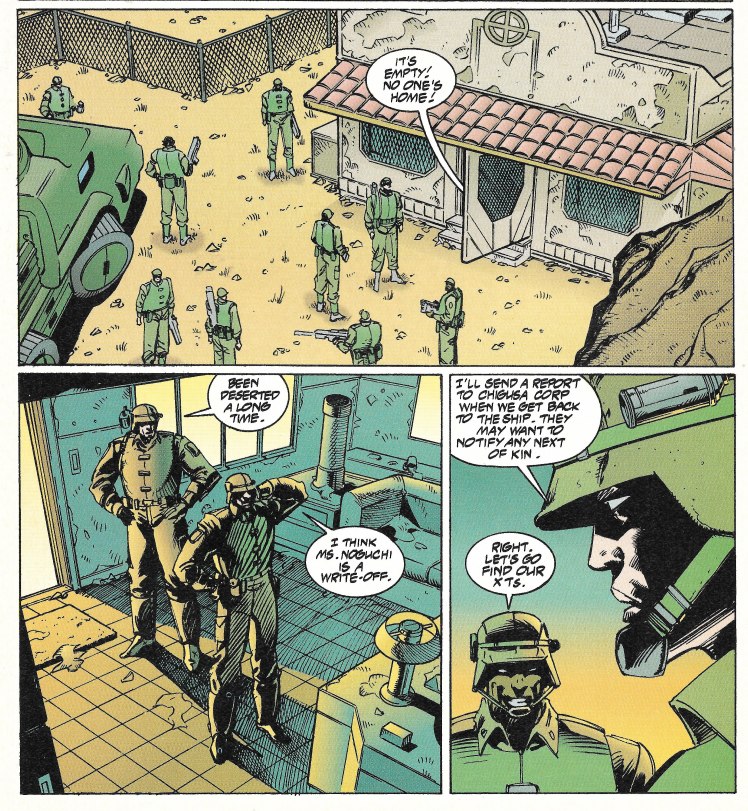 We get a little interaction from our squad, who complain about the heat… 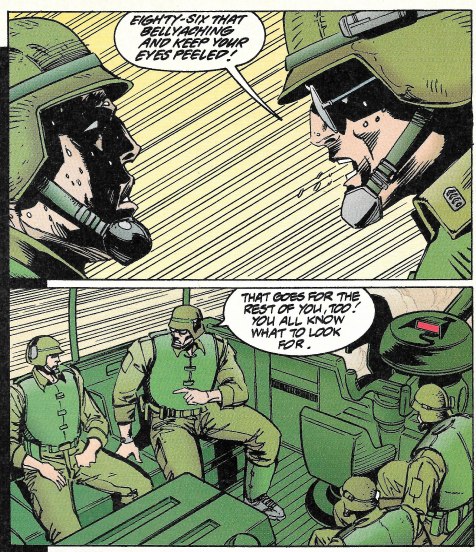 …which leads to taking some from their company CO.
But bellyaching stops when they come upon the crashed spaceship. I'll give you two guesses who owns this little number… 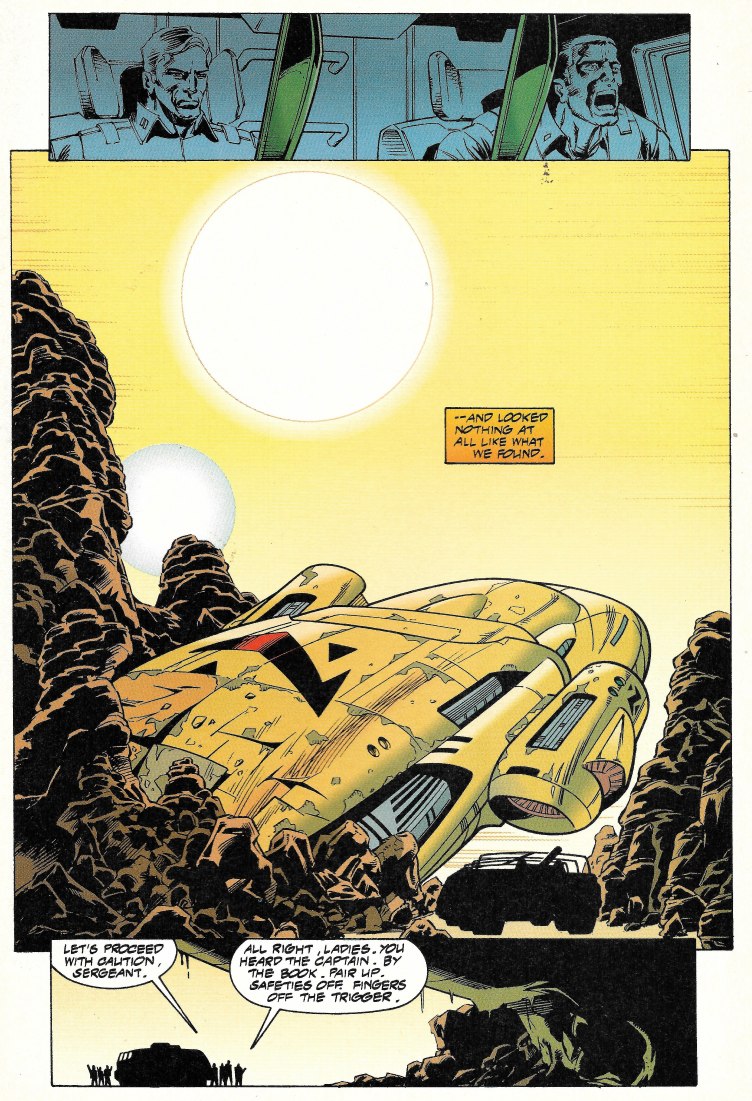 The Lieutenant and one of the soldiers discuss whether the cliffs all around them or the inside of the spaceship make a better place for an ambush, which shows they are thinking. The book then shows a view from the cliff top as the officer says he'd rather be in the ship because he would be out of the heat, which as we all know is something the Predators love. Then we shift down to the grunts entering the ship one at a time. 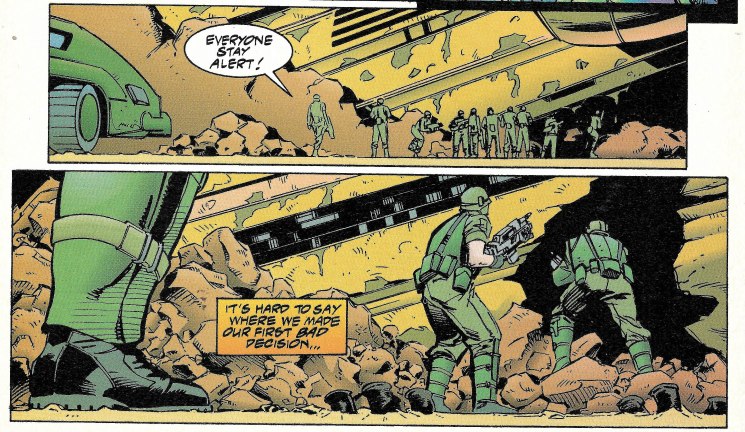 I'd say the moment you decided to appear in this comic book, way back on page one, was your first bad decision.

And I'm right because as soon as they enter, this jump-scare happens. 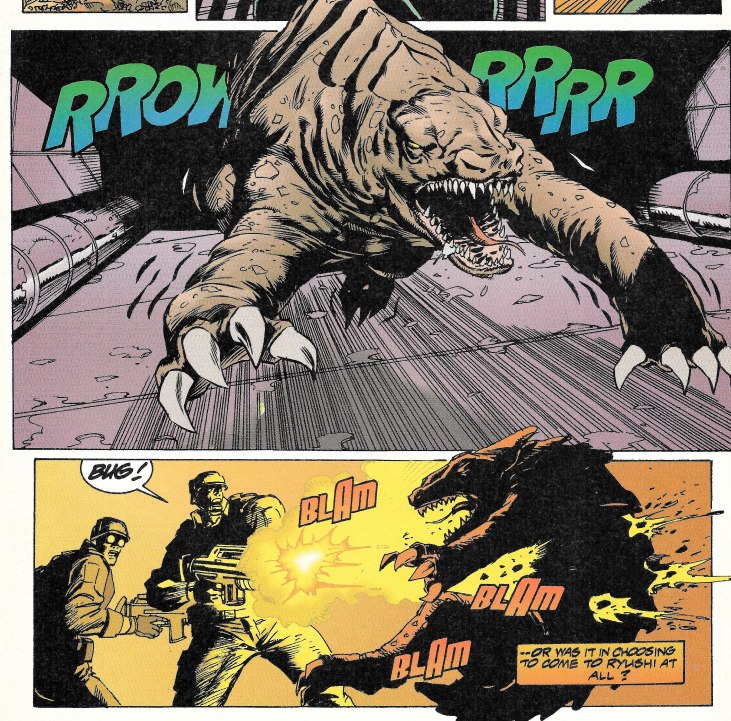 Which leads me to question if jump-scares actually work in the comic book medium. I think no, but understand the reason for its inclusion.

I do love that it shows how scared these "big, tough marines" are. It humanizes them to a great extent and makes me sympathetic. 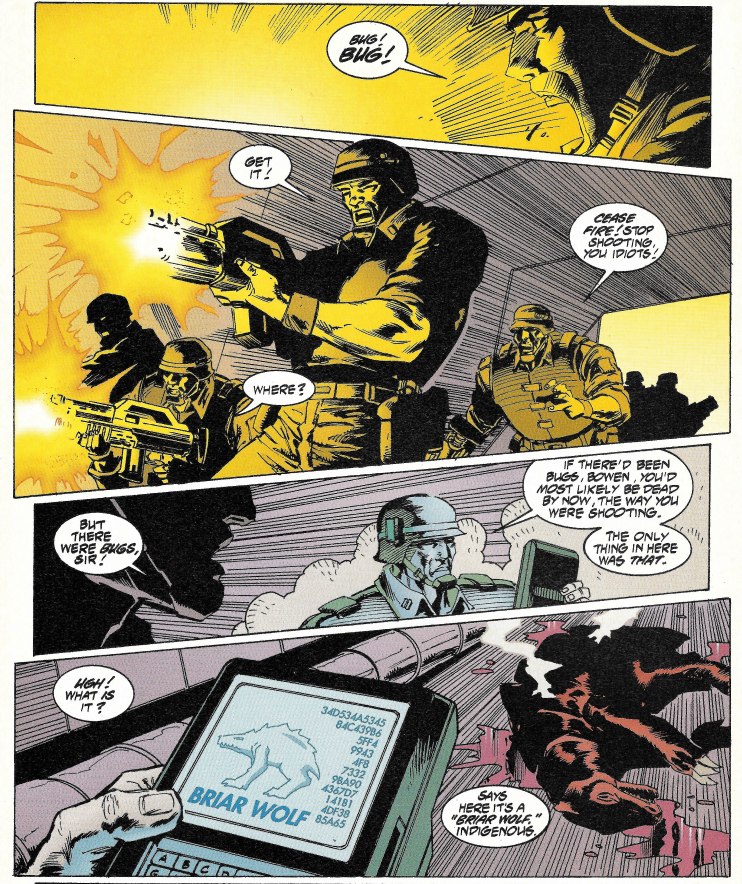 The briar wolf was feeding on something in the ship. A dead body that the troops find next and label "almost human." 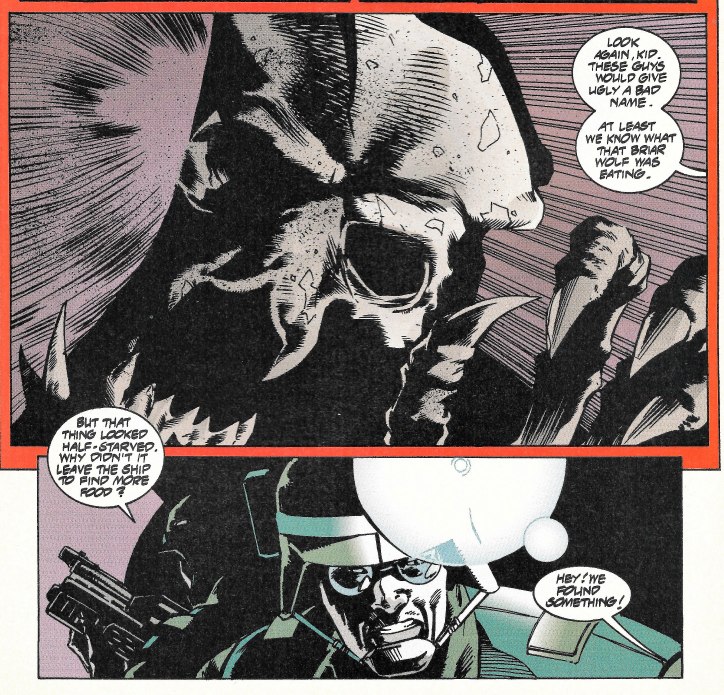 And now we start to get the creepiness factor ratcheted up as a bit further on they come across a live Predator who appears knocked out. Something about this seems not right. 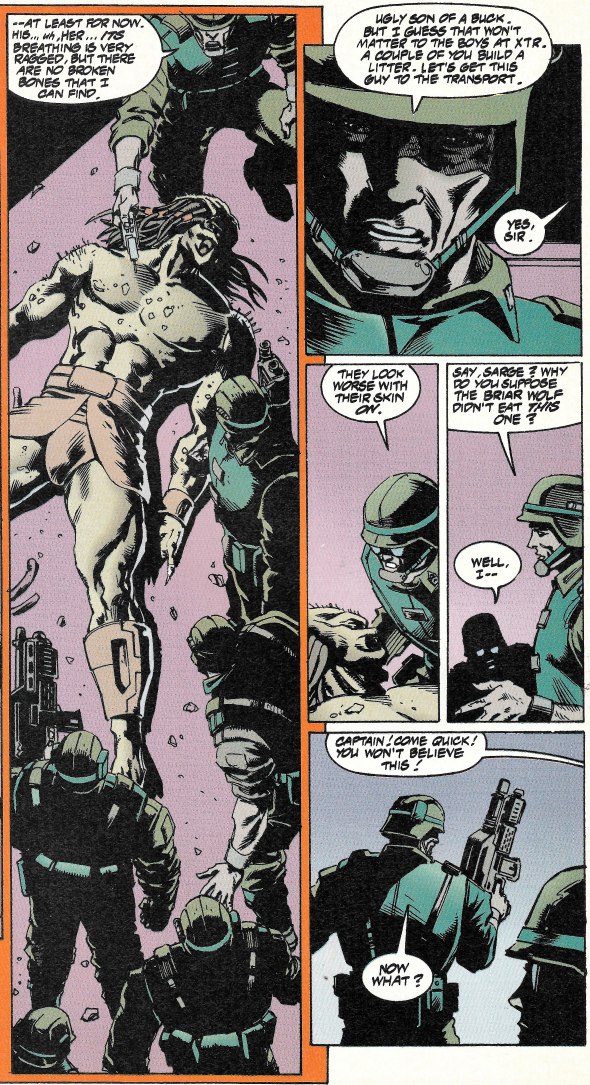 Love those observations: the briar wolf wouldn't eat this one that was alive and fresh because…yeah, you should be thinking what I'm thinking…something borne out by the discovery in the next room. 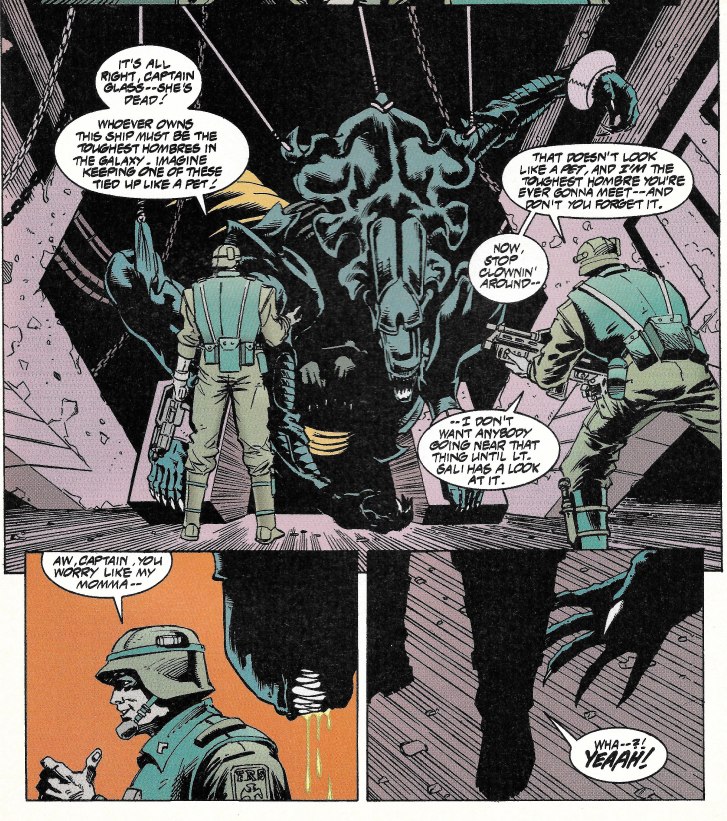 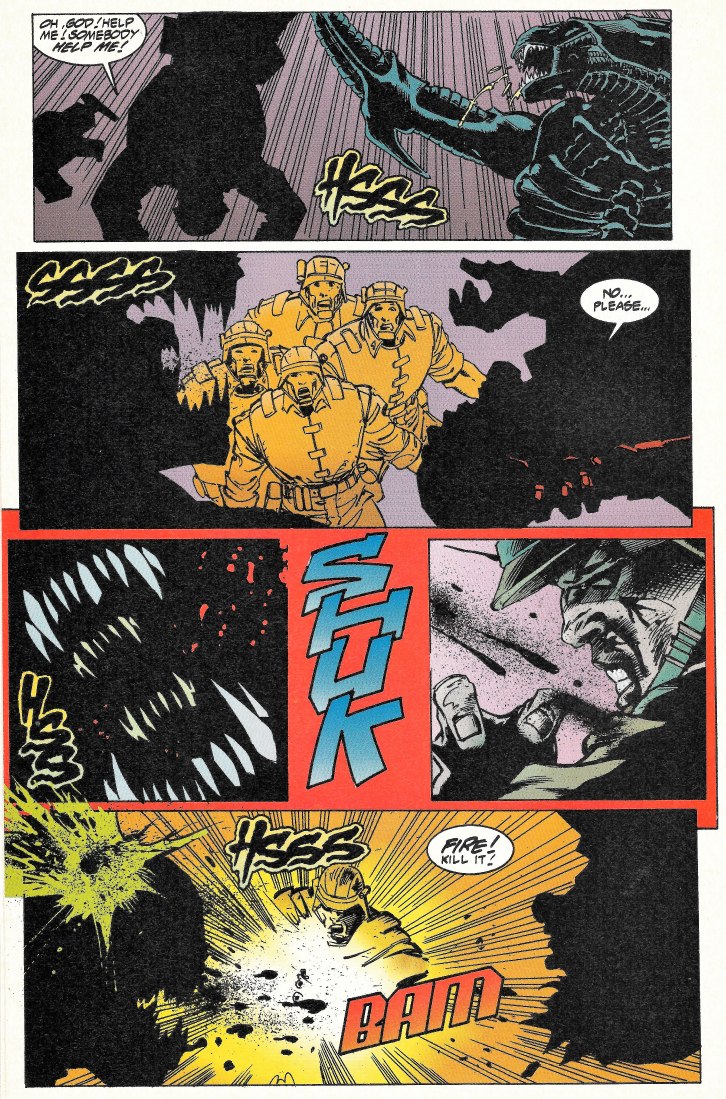 Which kills a grunt and then is filled full of space ordinance by the rest of the platoon. 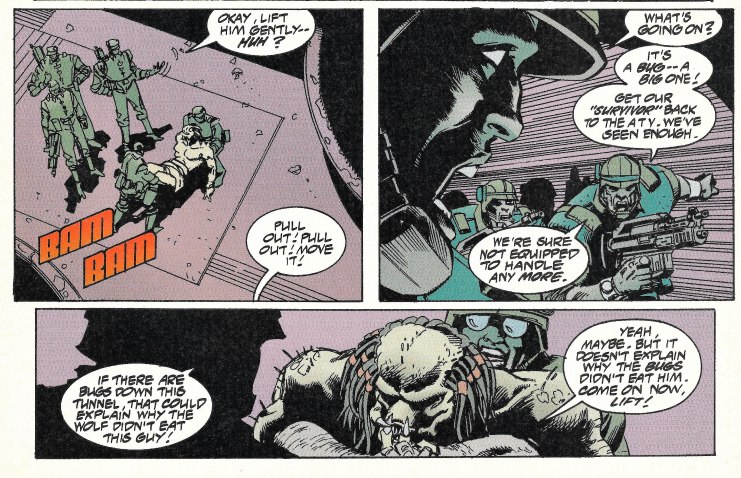 The rest of the troop is trying to get the unconscious Predator out of the ship and they are asking too many important questions.

I'm going to say that parts of this book hit just the right notes with me. Specifically the way it built suspense by having the marines be smart enough to know something is amiss, but just not as experienced as us Alien moviegoing audiences are with the monsters tactics. That Predator is implanted with a chest-burster, bet ya dollars to donuts and we all knew the queen was alive the moment one soldier told the other he was getting too close. These cues work, even in this format. I actually found this book to effectively build unease similar to the movies.

And as we make it back outside, with the shift into blinding daylight from the dark interior of the crashed ship, those fears of ambush become a reality…but from below, not from above. 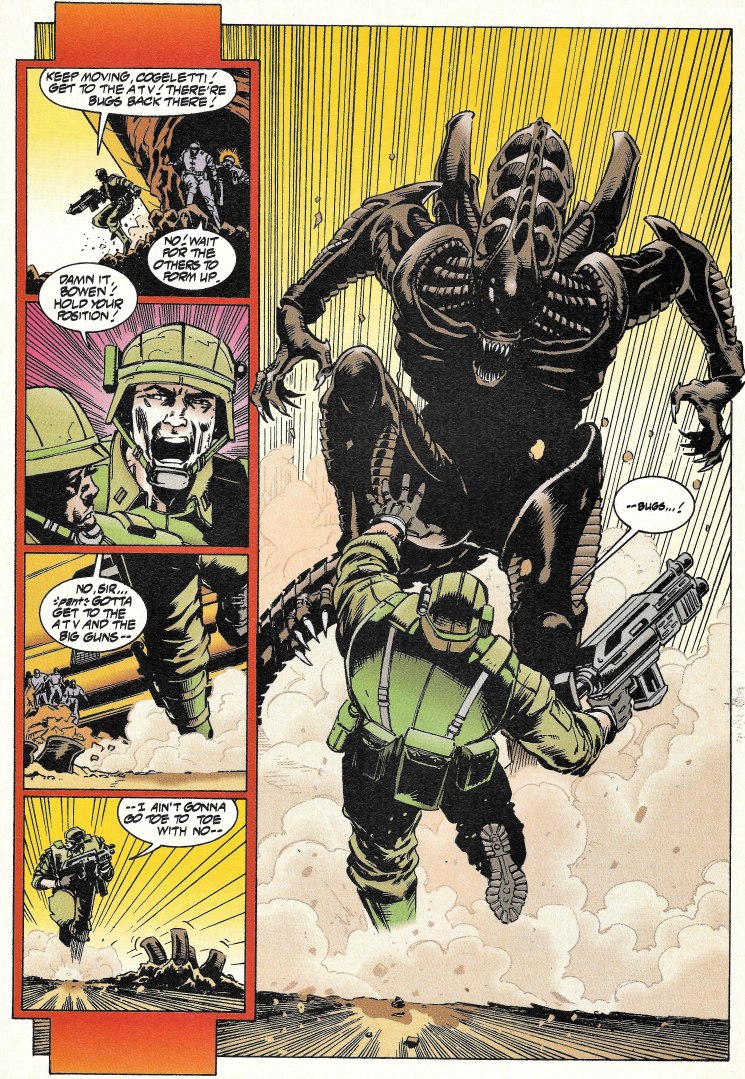 One more soldier down, but the Lieutenant has enough sense to keep everyone on the same page. They start tagging Xenomorphs one at a time. 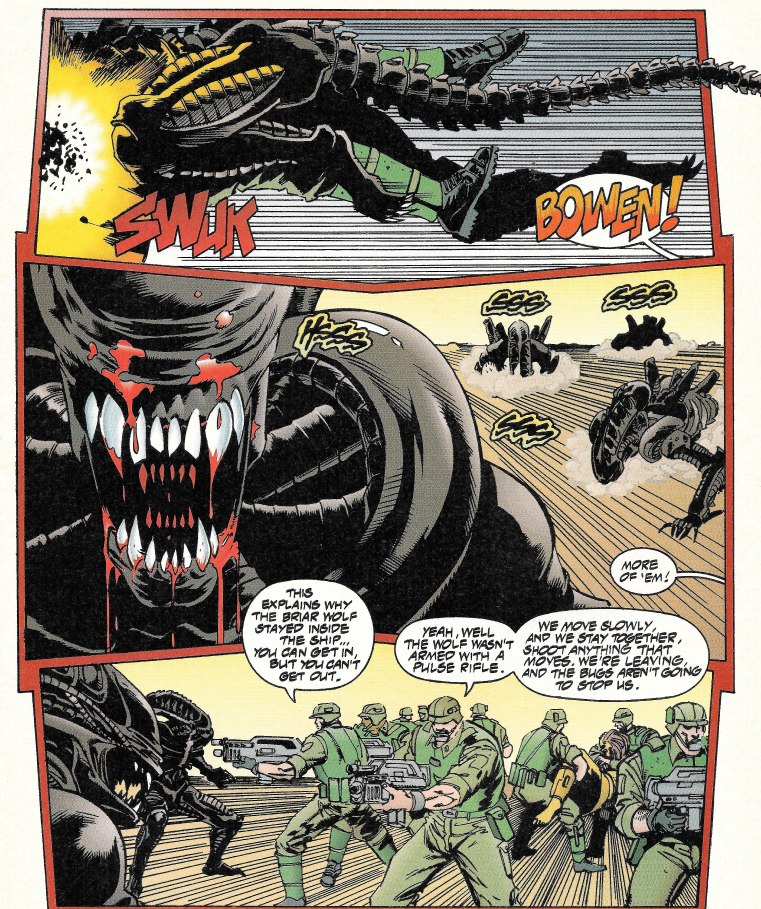 One gets a drop on the group carrying the Predator, however and that's when things get interesting. 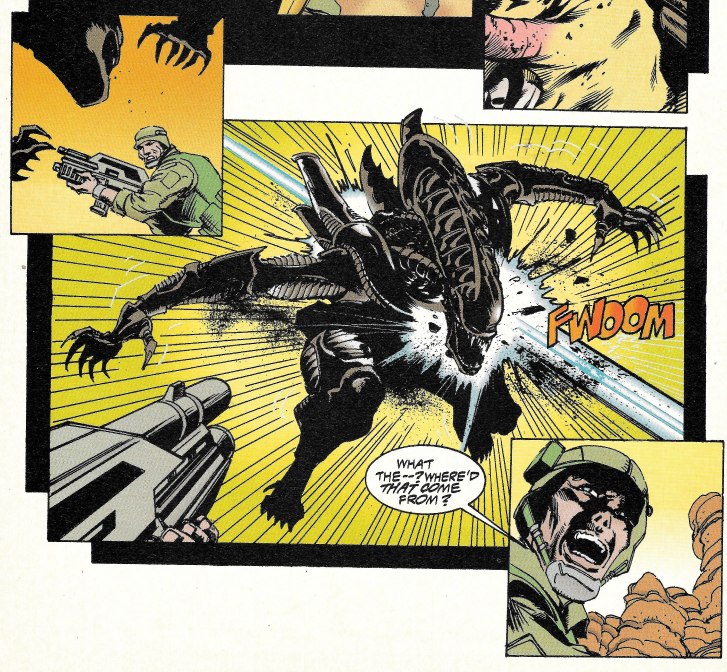 Again, knowing what we know about the Predators, having them show up in the middle of a firefight isn't a "good" thing. 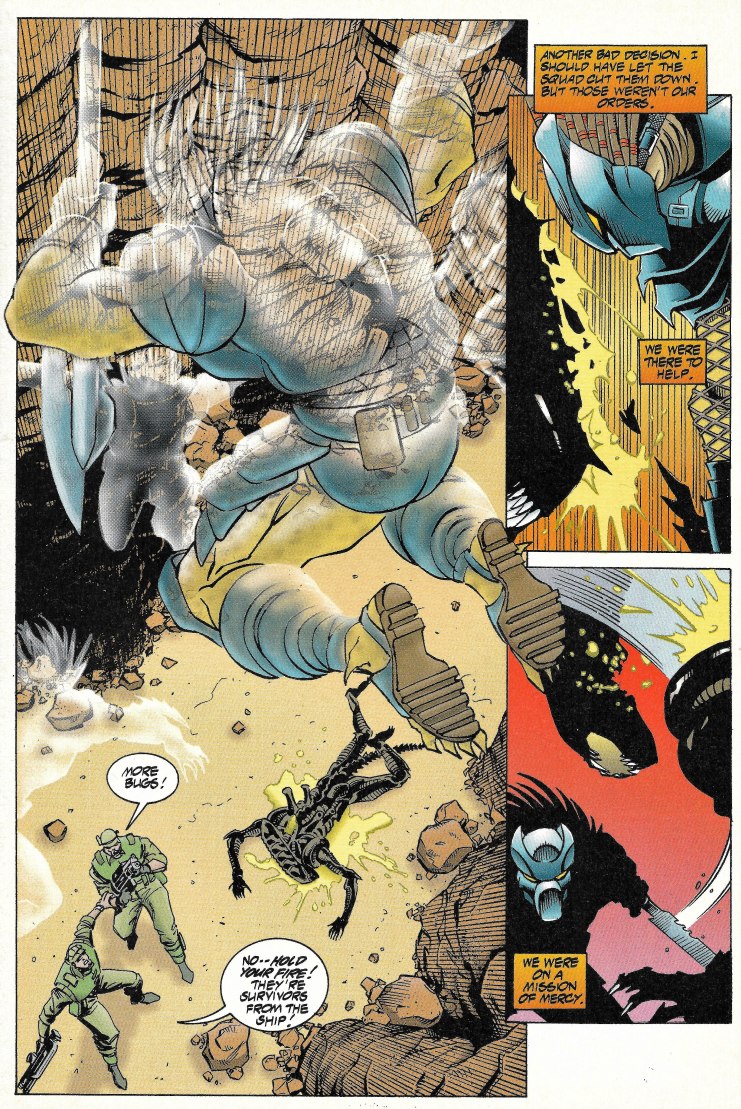 Nope, not a good thing at all. 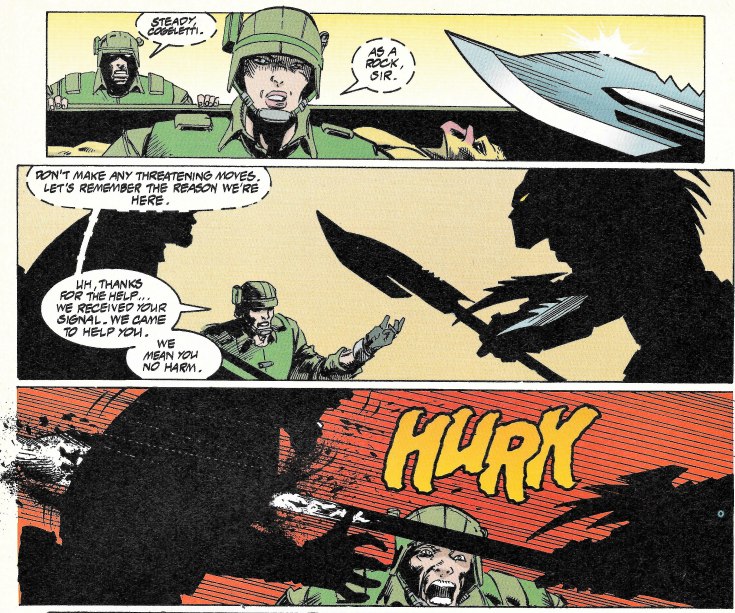 And that's where the first issue ends. I love where it is going though and at two issues appears to know how to tell a good story and then get out without a bunch of added fluff. Can I name any two marines from the story? No. Does that make me feel any less sympathy for them and their plight? Not in the least.

I will be looking for issue two in future bind diving to see where this one ends up going.
Posted by SonOfCthulhu at 2:33 AM