A scattershot history of Guardians of the Galaxy, Part 3
Star Lord #1 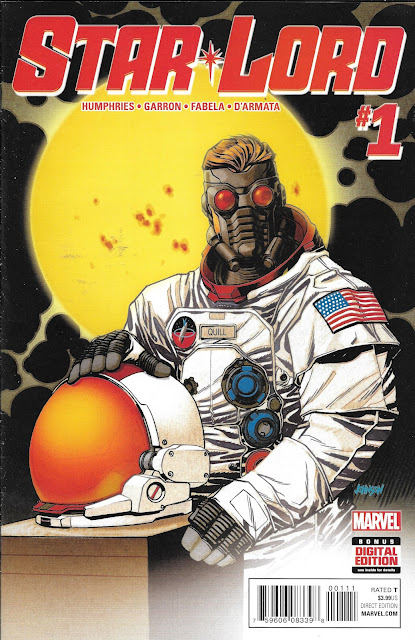 Not your Father's Star Lord

There exists a subtle difference between your Peter Quill and mine.

My Peter Quill began with Steve Englehart back in 1976. Star Lord was a dashing blonde-haired Adonis in a blue jumper who swooped in like an extra from a Flash Gordon comic. I watched him on the cover of Marvel Preview, the black and white Marvel mag that was too expensive and too adult themed for me to coax money/permission to buy. 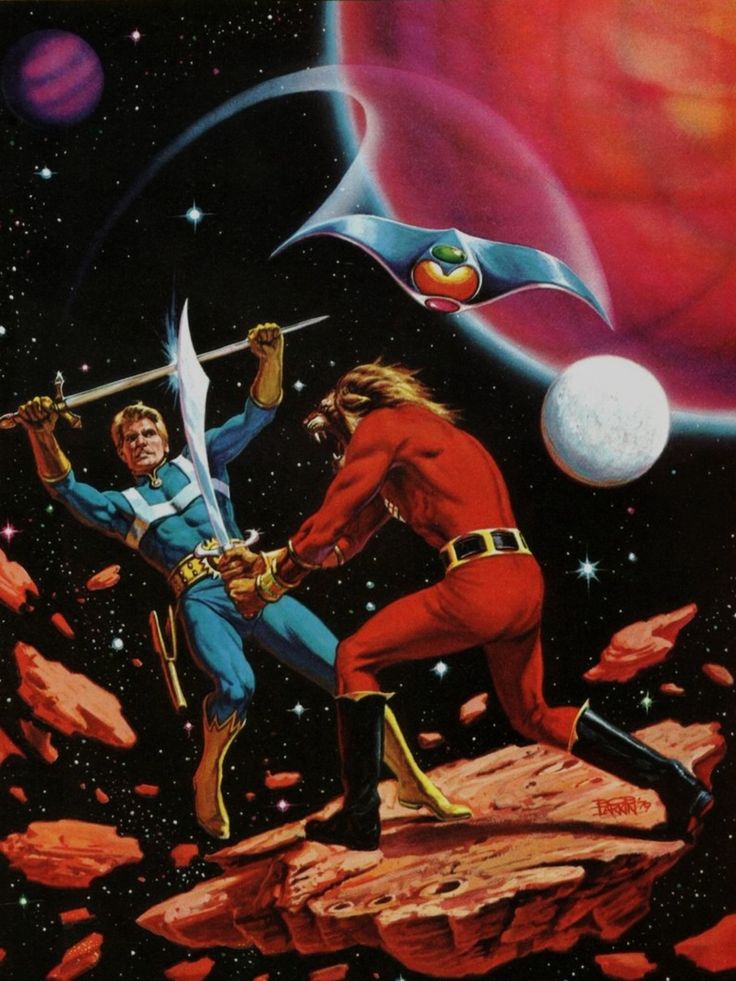 When he reached reprint state, I had moved on to less space oriented stories and my growing obsession with Iron Man. Too bad. I bet I missed some good stuff. 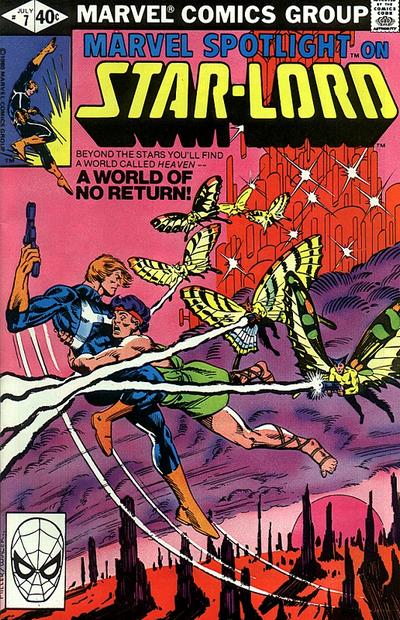 Still, this is who Star Lord is to me and he is a bit less of a rogue and a bit more of a hero archetype than the Peter Quill of today. I'm just lucky I get to keep both. Today's Star Lord is built up in the Han Solo mode, and not in the wimpy "special edition" version. No, this Star Lord definitely shoots first and questions Greedo later.

And I can dig him too.

Marvel, of course, has merch to think about, though. Merch and what a recent article in The Beat pointed out as a corporate strategy of creating depth out of every popular character. In my college Marketing major days we would have called it "brand cannibalization." What it means in layman's terms is that Marvel will make as many books out of a popular fad or character as possible, all the way to and beyond the point of burning an audience out on said property.

Thus when the Guardians of the Galaxy movie got so big, so fast, Marvel's marketing arm came out with Rocket Racoon and Legendary Star Lord books to go along with the ongoing Guardians main title. Not sure how any of those sold, but they didn't have a problem with cancelling them later. After Secret Wars reset Marvel's universe, Peter Quill again received a new rebooted solo title, called simply "Star Lord." This time the book went into detail about Peter's past, focusing on his upgraded/changed origin that fit a bit more in line with the movie version of his character.

One thing both comics versions have in common is that Quill's Mom didn't die of natural causes, but instead was ruthlessly gunned down by alien interlopers. 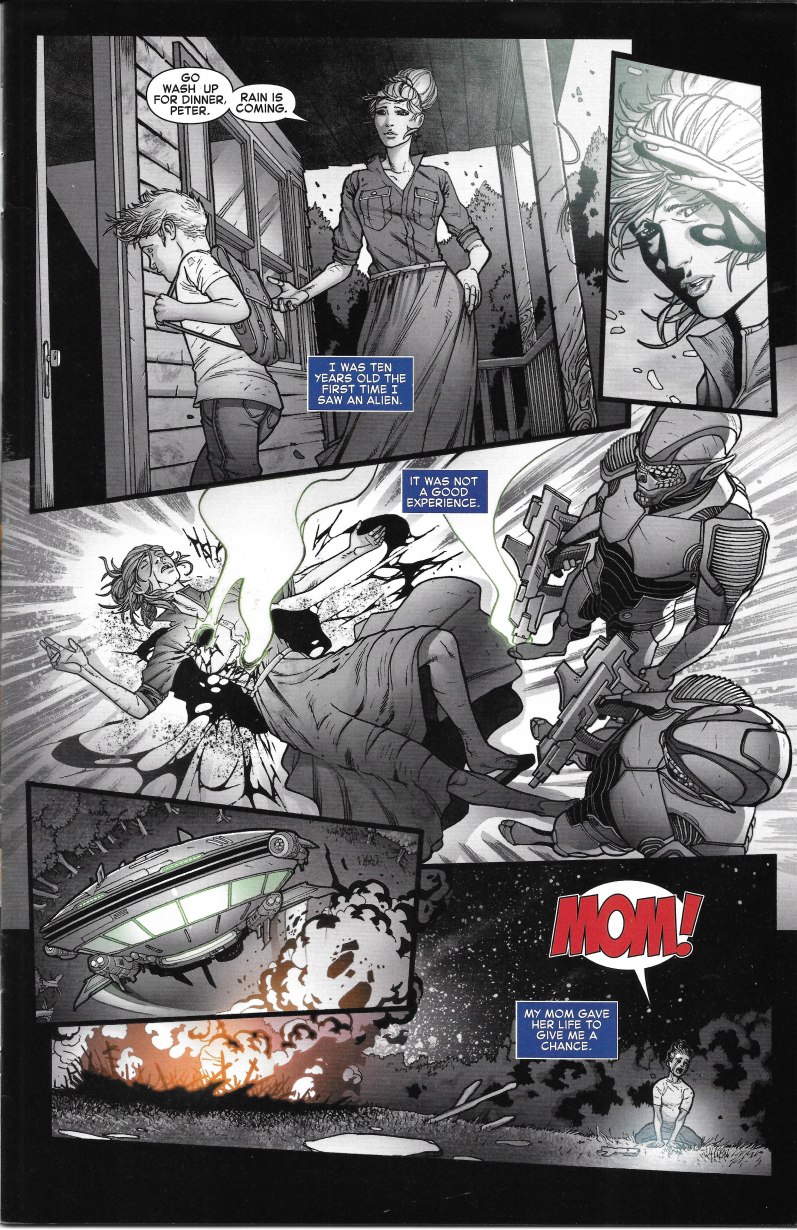 And I don't mean the kind any boarder wall could keep out, neither. 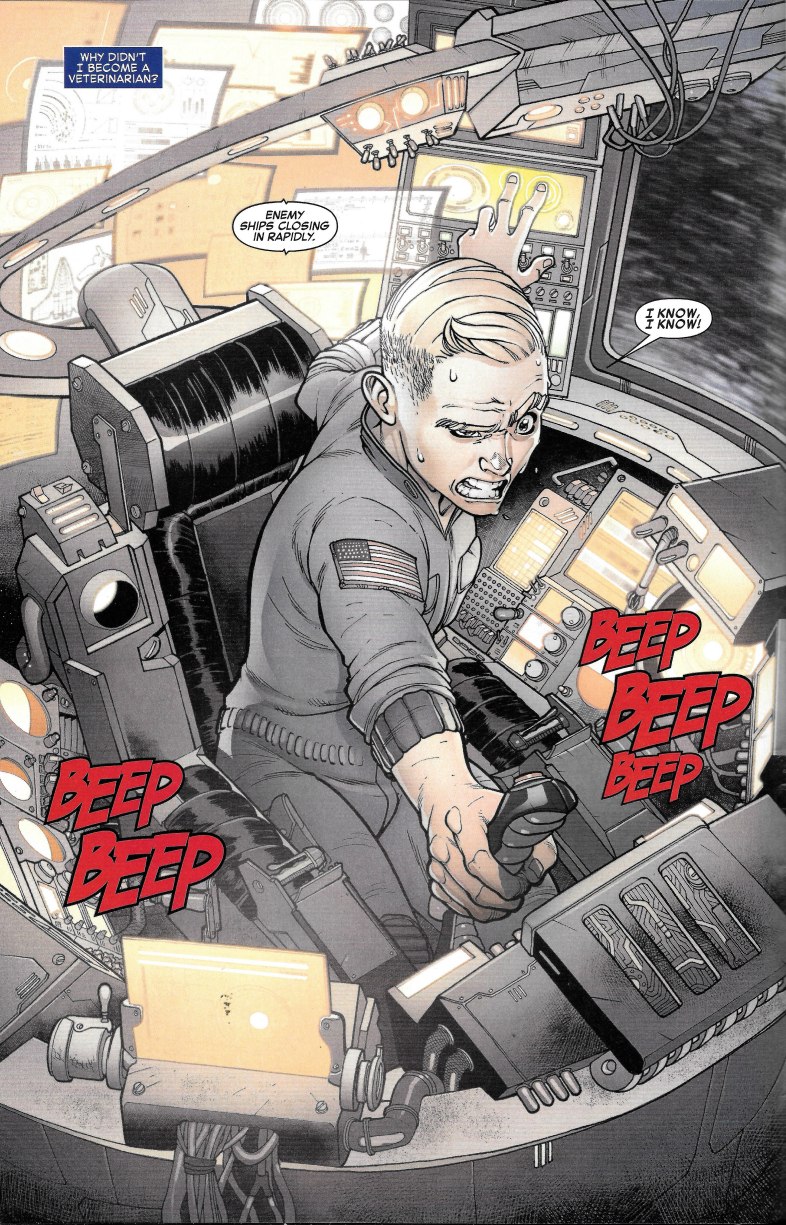 …a childhood that has Peter in space at 18…sort of. You'll see. First he's attacked. 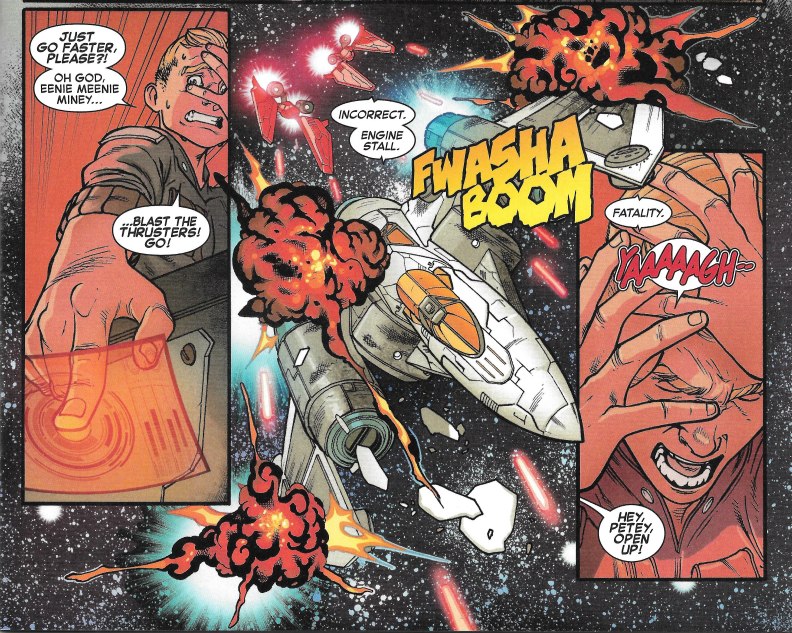 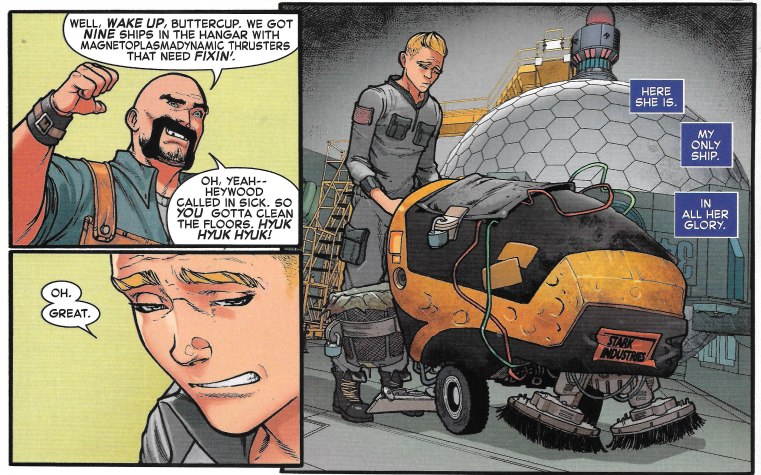 …and he's stealing simulator time because his true job is more of a low-grade mechanic/janitor.  Neither of which Peter sees as a way out into space. He is searching for a step toward finding the ones who killed his mother and left him for dead. A step toward vengeance and freedom.

Sort of a Cinderella story, except his prince charming is a date with the universe.

Pete sets all his hope on this giant ship, the Asterion One. 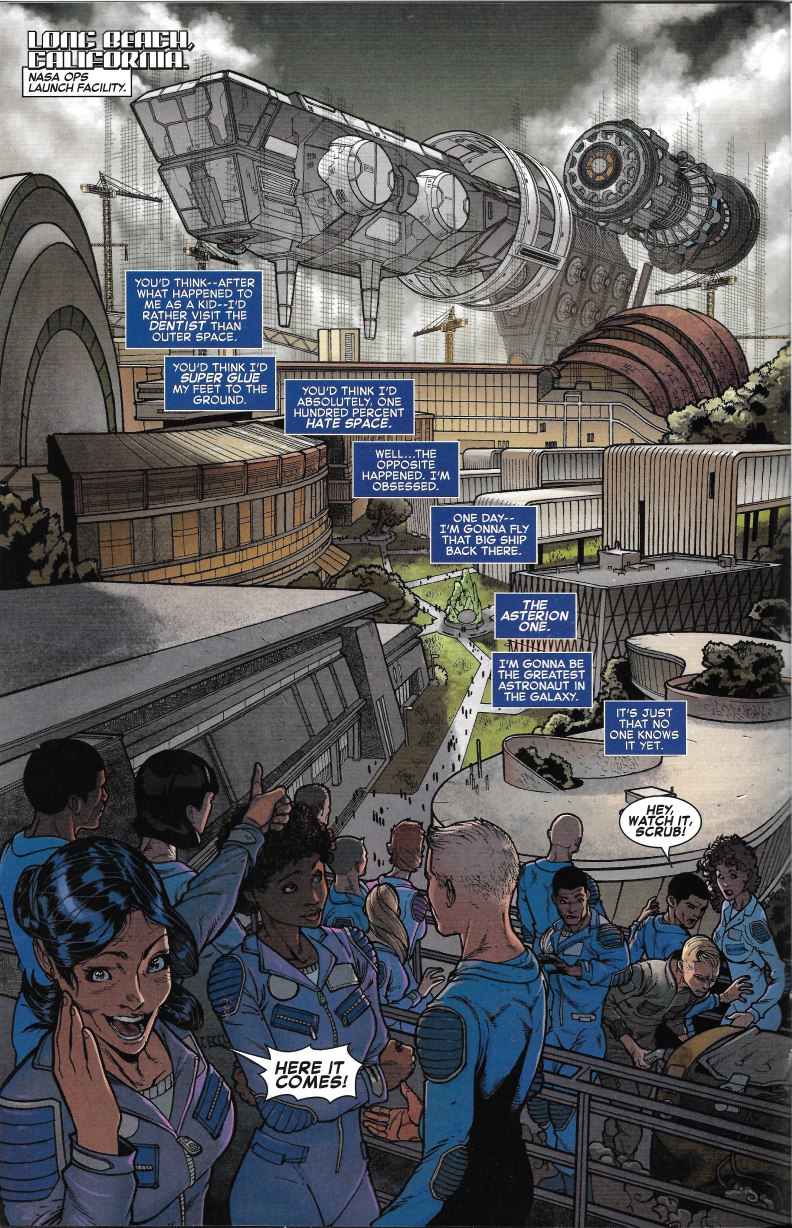 A massive multiperson carrier, Asterion One was built to take us to the stars. Except there is one little problem.

It doesn't have a working light-speed drive.

But all that could change IF the flyboys could figure on how to make this captured Kree Warbird hit warp speed. 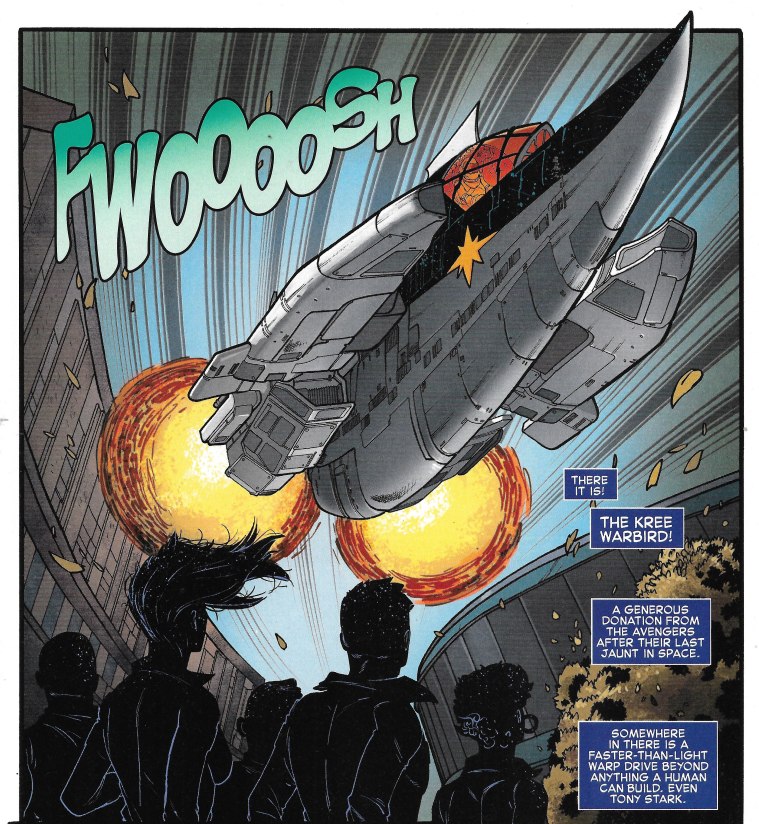 Unfortunately everyone has tried and failed. Looks like the Asterion One and Peter are stuck on the ground. 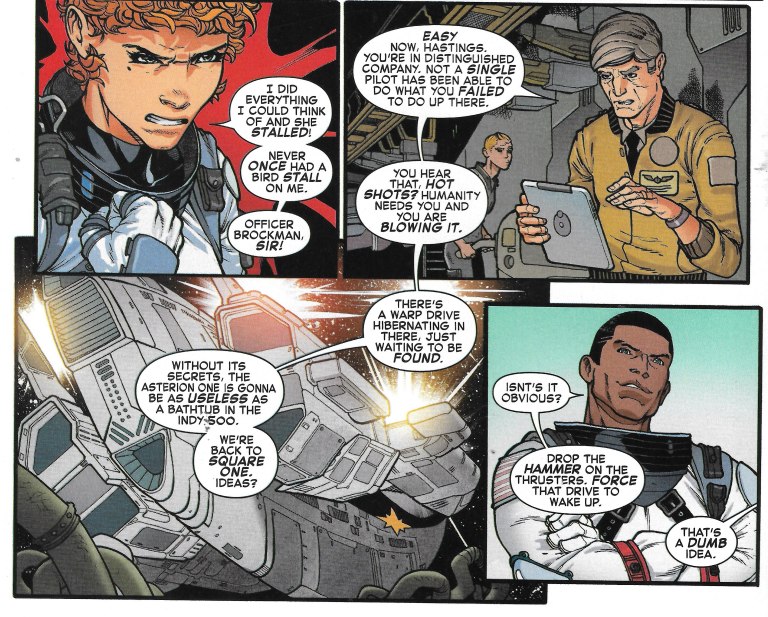 Especially if these are the guys who will be attempting to make the Warbird spread its wings.

Peter has other ideas, of course. Ideas no one seems interested in entertaining. 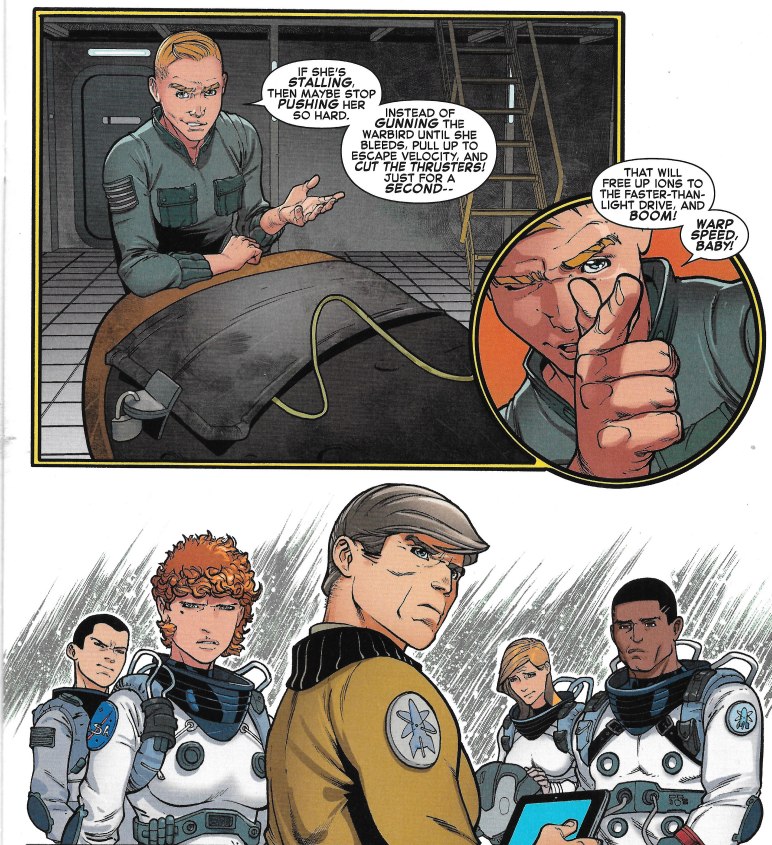 These guys have never heard the Sherlock Holmes quote about "Once you eliminate the impossible, whatever remains, no matter how improbable, must be the truth." 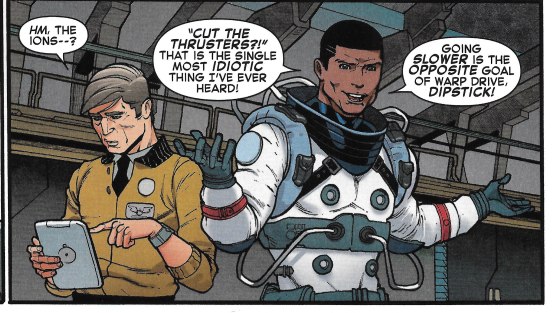 Peter will get a chance to test his theory a little later on, under less than ideal circumstances. But first, a little meeting with the commander about a matter that will end in disaster for Peter. 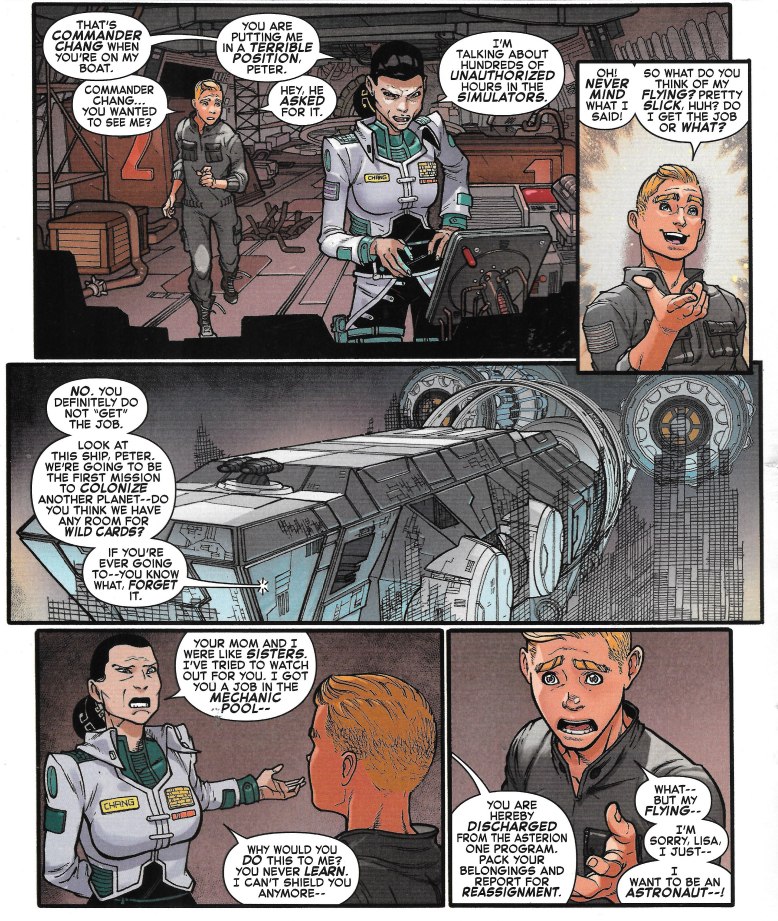 Peter takes this exactly as expected. 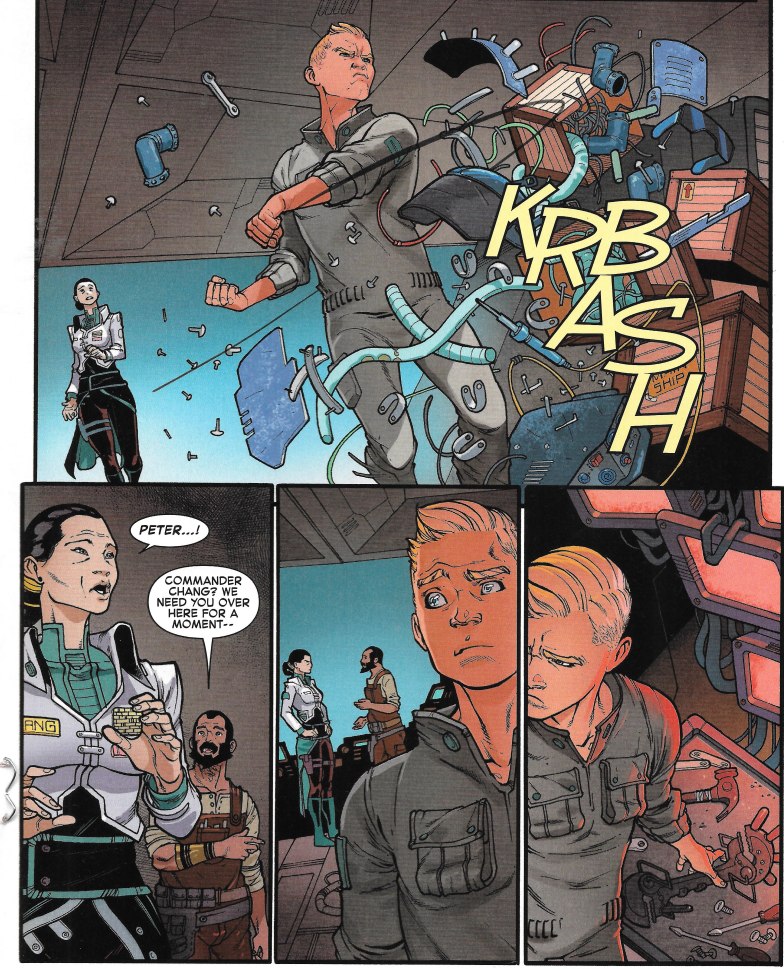 Peter mopes for exactly two seconds and then makes a fateful decision. He packs his bag for a trip with no return ticket. 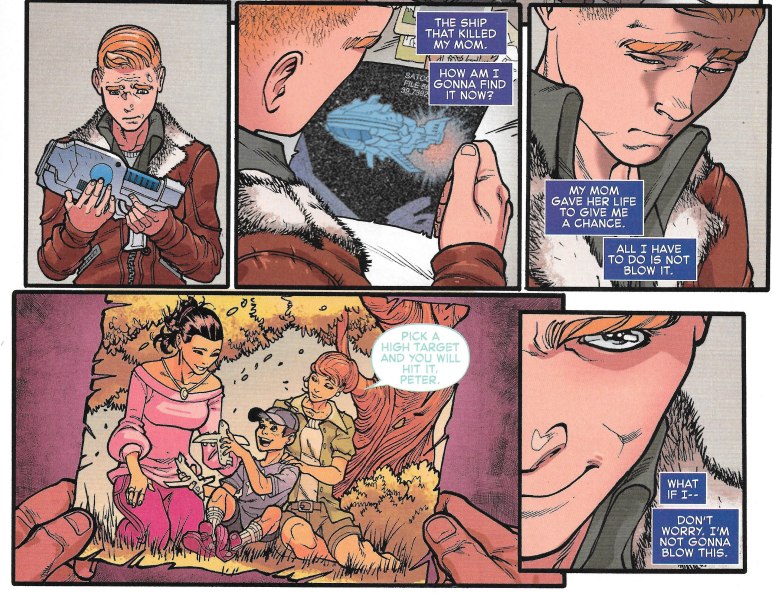 And interestingly enough…across the vast reaches of space, it appears someone ELSE is interested in that missing Kree Warbird. Someone who looks a bit like…hmm… 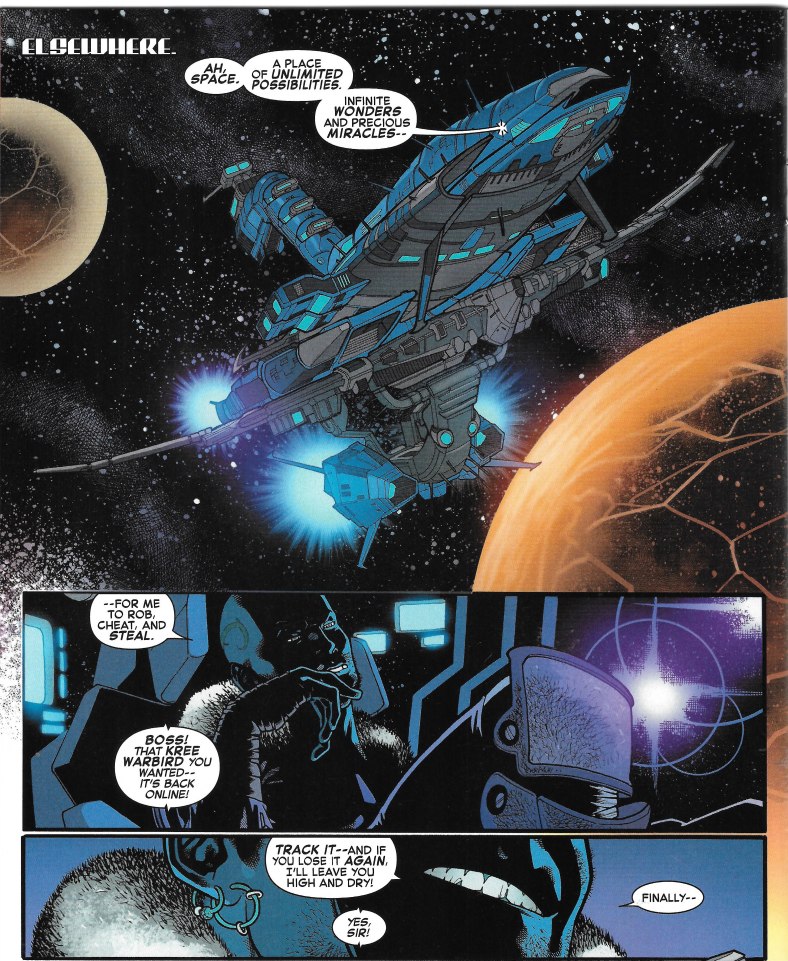 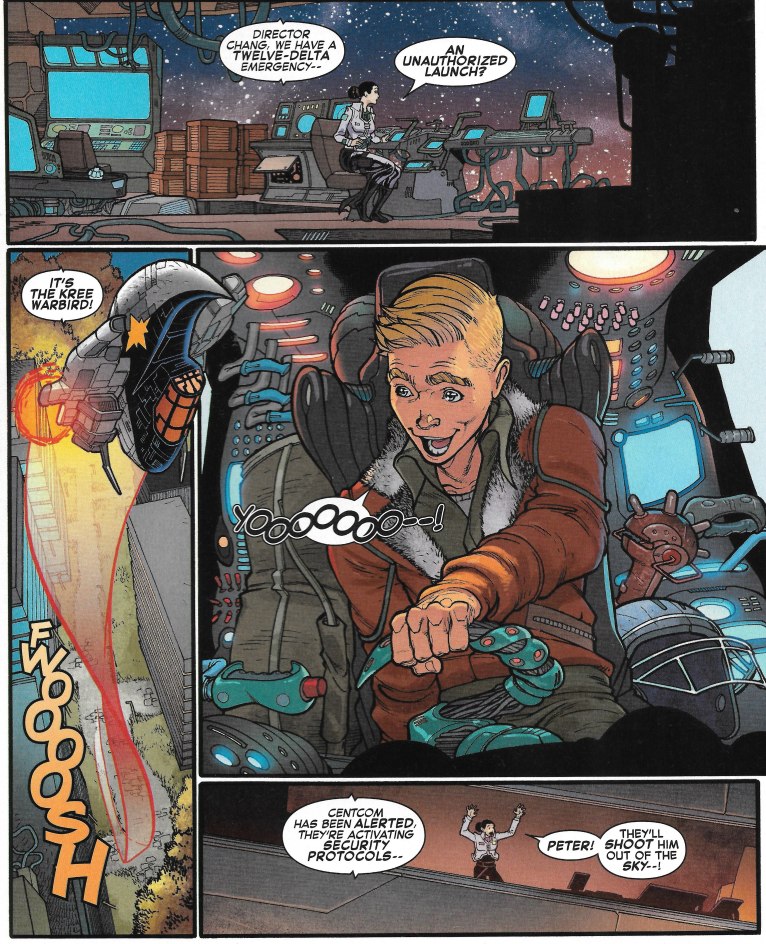 …right out from under the commander's nose. This will not end well, I can tell. Especially once the military gets involved with orders to take the warbird down no matter what. 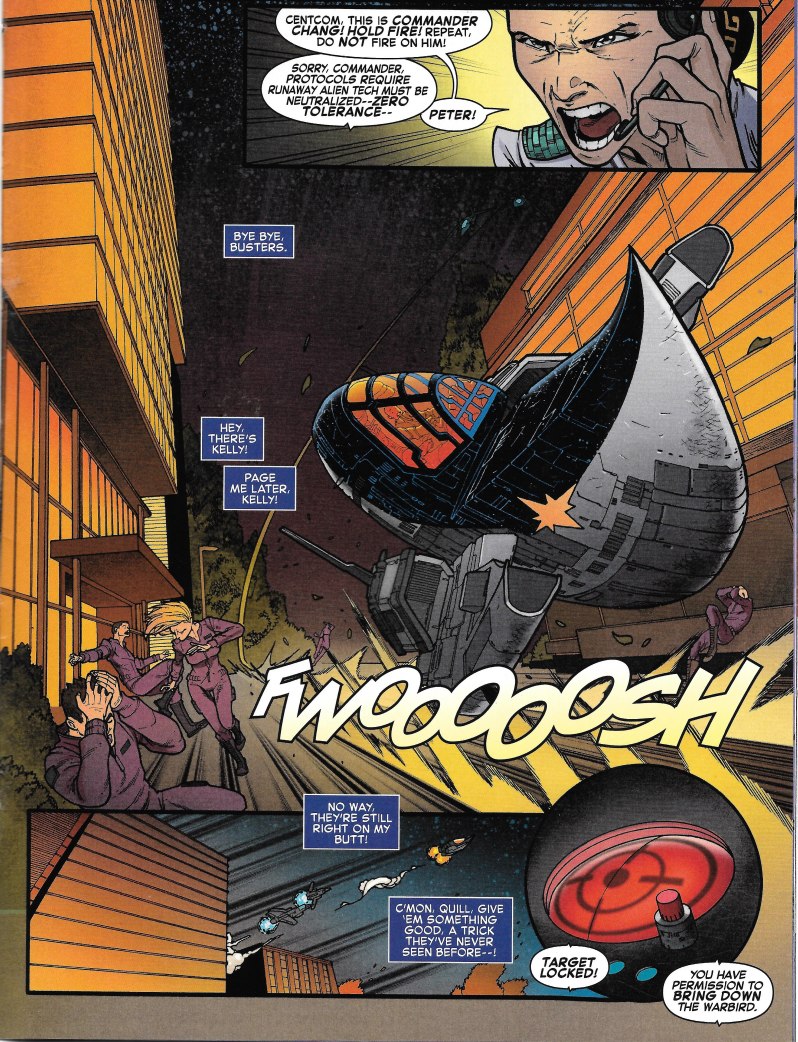 Even the commander doesn't have enough pull to stop what's about to happen. Peter looks to be headed for that big airstrip in the sky.

Of course, the book can't let that happen. So it gives Peter his wish: a way out and a way to find his mother's killers. 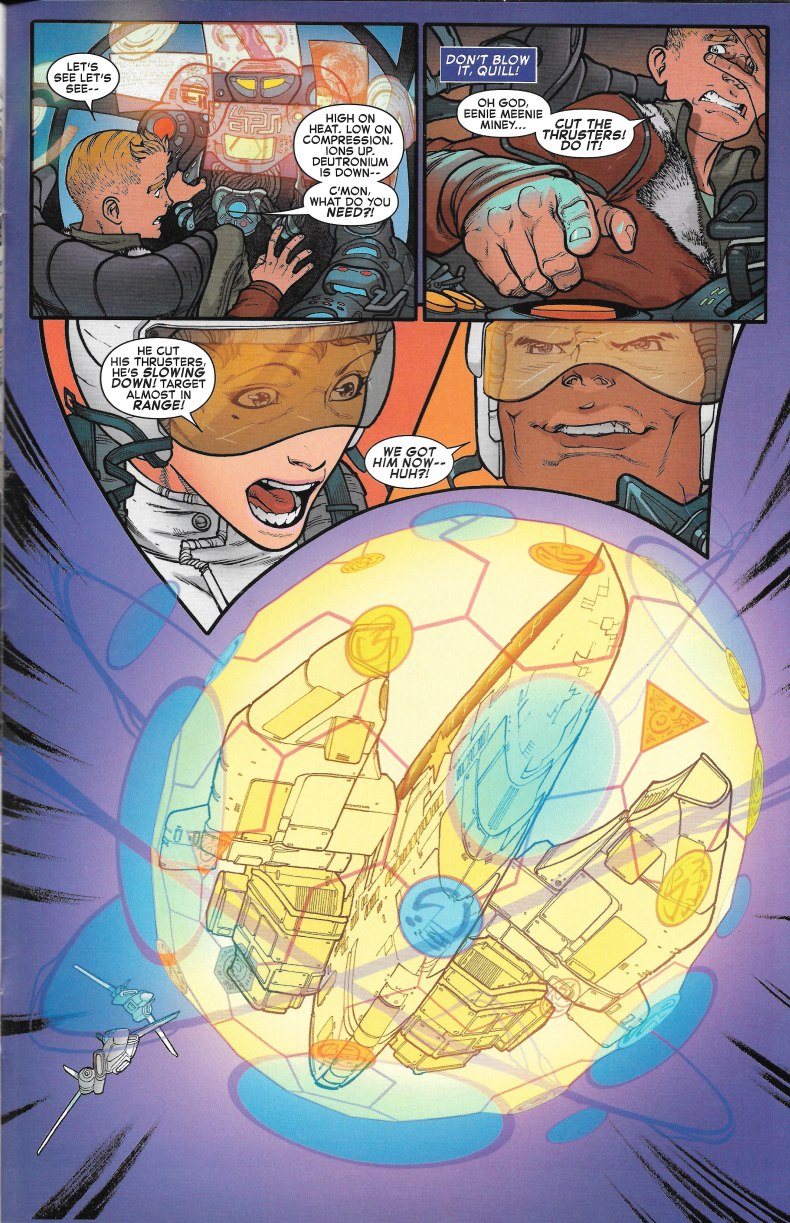 It also gives Commander Chang the variables she needs to fix the Asterion One's hyperdrive, so win-win all around. 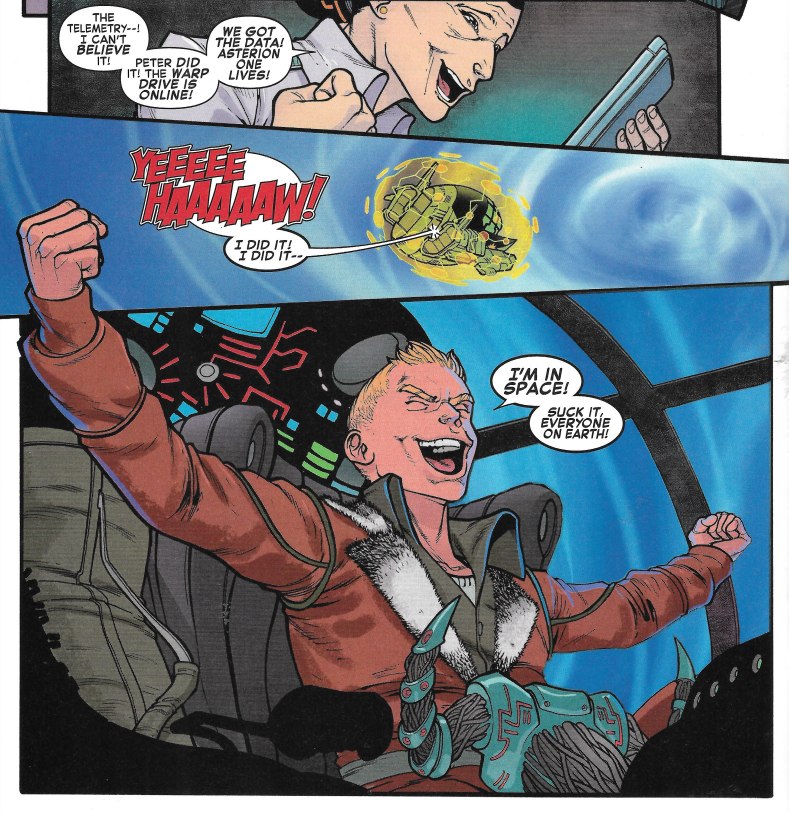 But what it doesn't give is… 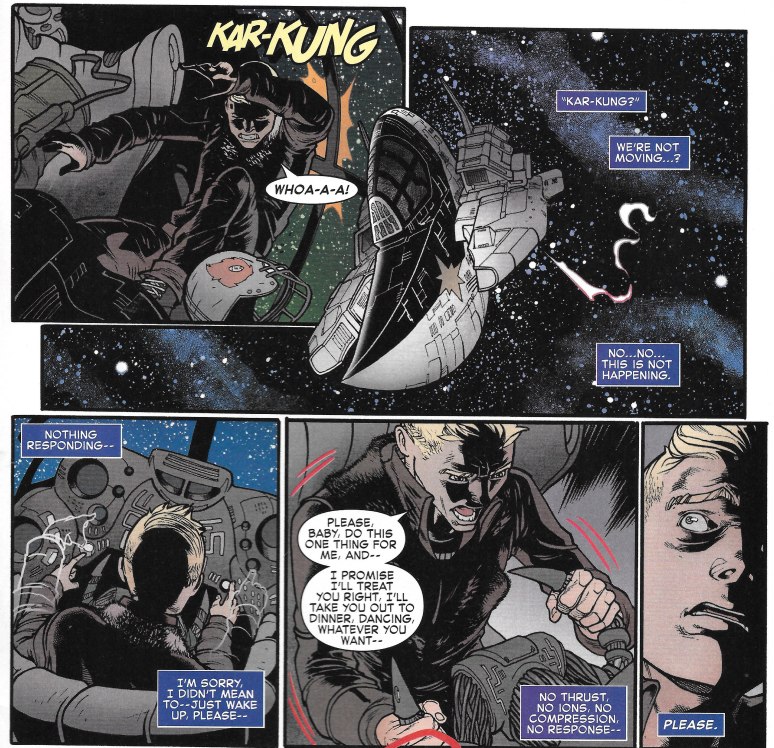 …a way back to Earth at the moment. Peter has stranded himself in space on a ship without power. And it is very cold. In space.

The next issue blurb shows that to make sure we fit Peter into the movie continuity, we've changed up Yondu to match Michael Rooker's character. It's all okay, I suppose. No one will complain given that Marvel has a history of subtly making the MU and the MCU come together. I'm shrugging my shoulders over it too. 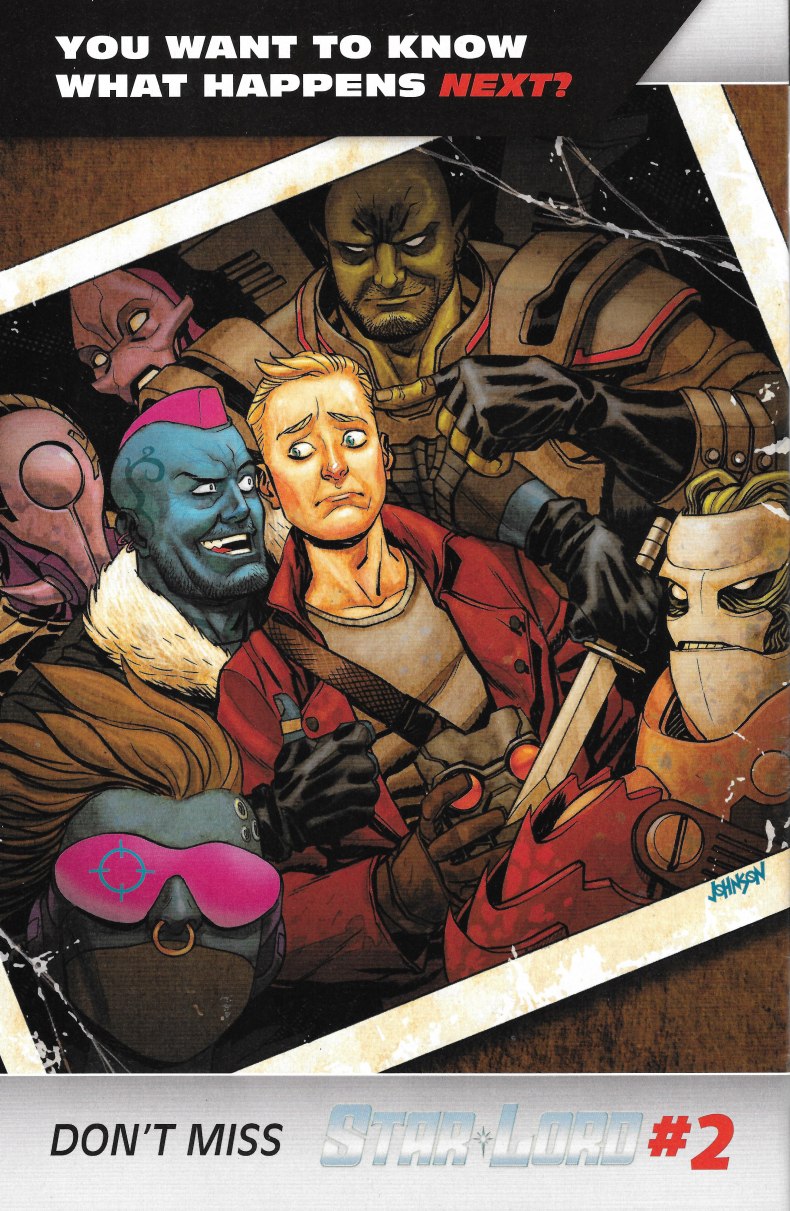 How was this for a first issue? Well, Peter is a seed in this issue, not quite his dashing 70's Flash Gordon man-of-action self and certainly not as foolhardy or brash as his Chris Pratt movie incarnation. What he grows into as the series progressed is a mystery the Crapbox hasn't solved. No more clues have fallen in the discount bin.

But did I enjoy it? Yeah. I did. It has potential to go places. I will always have my fond memories of what Star Lord WAS, but I have room in my heart for what Star Lord will become.
Posted by SonOfCthulhu at 8:51 PM