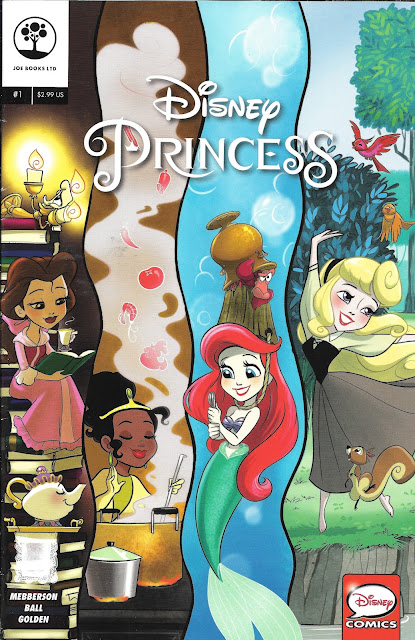 I wanted a comic book, what I got was the funny pages

I'm not far enough removed from my feminine side to not be turned on by a good princess story. And when it comes to princess stories, Disney has outdone itself over the years. I am genuinely a fan of them and turn up with my ticket money whenever a new movie is released.

With this week's Beauty and the Beast live action being released, I'm sure that Disney will be at the top of the box office yet again. I balk at them cannibalizing their own back catalogue for scripts to turn into live action, but I will admit that I will probably truck myself out to the theater for this one as B & B is my favorite all-time Disney princess tale.

I mean, it's a hot brunette who loves books with a thing for hairy men…that's total my type, if you know what I'm saying.

I also am the same guy who plunked down my $1 from the discount bin to pick up this Disney Princess #1 book that you see before you, in hopes of a cool story that crossed the genres of the various fairy tales into some overarching narrative that probably had something to do with a tea party or a birthday or friendship or whatever.

And I was down for that. It is interesting to see stories like that because I like to look at how the author blends the various settings and backstories into a believable backdrop. I mean Belle and Aurora could be neighbors, but how do you fit in Tiana's New Orleans? Also I dig the My Little Pony show for the second reason, how do you turn in stories that aren't strictly conflicts against an evil outsider all the time. MLP does a remarkably good job of this with their character driven stories.

I had high hopes that this book would go that route.

Unfortunately that was not to be.

This book isn't a narrative that blends all of these characters into one storyline. It is barely a "book" at all, being more like the insert you would find in your Sunday paper. Each page is turned 90 degrees and read like the Sunday funnies, with two rows of panels per page. Some comics are one line while others stretch out to two or more. All of them fall under what I would consider groaners, not really funny but will on occasion force a slight smile out of you.

What the book does have going for it is a consistent adorable vibe provided by Amy Mebberson's art. The princesses and their various character sidekicks are rendered with a loving attention to detail even though they are reduced to a pop-art version of themselves. I dug the art throughout the book and it is completely kid friendly and inoffensive.

Were it on a bookshelf and my four-year old granddaughter begging for it, I wouldn't hesitate to pick up a copy for her. However the book does absolutely nothing for me, which is a shame given that I really hoped for something I would enjoy reading alone too.

I should show you what I mean by throwing out a few samples strips. Let's start with this one of Snow White…

The good here begins and ends with the art, which is great given the format they've elected to use. The joke is a bit flat and this is the lead story, so it starts off kind of meh.

I’m only showing you the short comic strips here because as the longer ones go on for pages to reach the same degree of barely-a-grin-inducing humor, you begin to WANT them to be over. They trot out the same old character tropes too. Ariel doesn’t know what a thing is and the seagull tells her crazy stories of what he believes it to be. The three fairies try to make Aurora a cake without using magic and they make something inedible. Jasmine and Aladdin are held by TSA as suspected terrorists and his carpet impounded. You guys have seen all this stuff before.

Okay, that one was funny.

As you can tell from these snippets, the strips may take place before, after or during a Disney feature, which gives the writer a much broader character list to pull from to craft their jokes. It would just be nice if more of them actually felt funny.

This book has to be aimed at the preteen market, which is fine, I guess. I just wished for a Disney Princess Adventure book. Something that would be new stories of friends venturing into each other’s environments, perhaps bringing back all the old enemies through magic or coincidence. You know: something more ongoing. Maybe Disney should just give me a call. I think I have some ideas on how to make a good book to go along side this one.

If you do have a girl 5-11, this book might really appeal to her. Disney definitely got the right artist for the work. The character design and backdrops all work well. But those jokes certainly need to be punched up.

At least if they want me to be their guest...
Posted by SonOfCthulhu at 5:21 AM