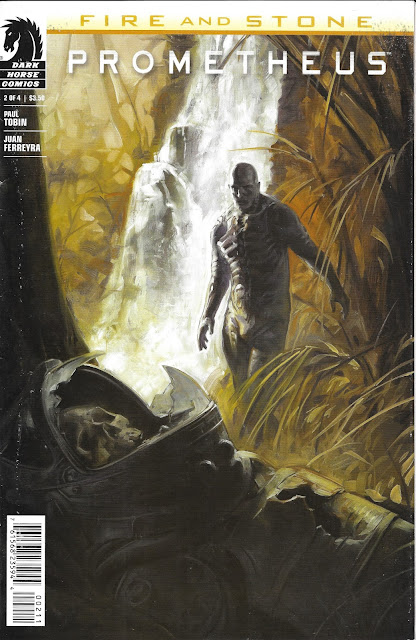 Not as stupid as the movie

Alien is my all-time favorite movie. 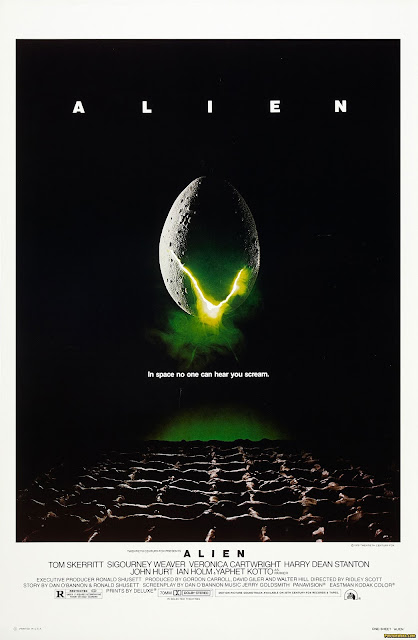 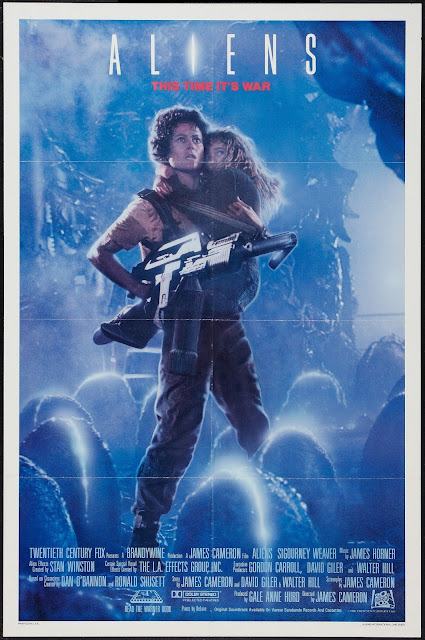 Aliens took the franchise from a straight horror movie and made a step toward becoming an action adventure franchise. It did so without disrespecting what came before. It also is a solid 10 out 10, and I love it. Not as much as the first, but it is still a faultless movie.

There are very few franchises that boast one or two perfect parts. Alien has that within the very first two entries.

And then Alien3 came along. Everyone lost their minds. It wasn't the action-adventure that Aliens was. It destroyed the happy ending of Aliens within seconds of opening. It was dark and depressing, some of the accents were hard to follow. The movie was a step back toward true horror instead of being another run-and-gun fest. Ultimately I think the ending created the most upset.

I came out of the theater and thought "Makes sense." Ripley had went up against the perfect killing machines twice. Why should it be in doubt that when you play dice with those odds you are likely to come out on the losing end. I accepted it. It was for me an 8, but still a good completion of the series.

Yet more names came along. Visionary Jean-Pierre Jeunet came on board as director, the guy I was digging for his dark but amazing The City of Lost Children. Joss Whedon, whose Buffy the Vampire Slayer had choked me up in the theater. These guys had talent. Talent enough to bring back the dead? I was skeptical.

But I was curious enough to go see it.

And oh, how it sucked. Joss wrote the characters much as if he was writing the Avengers (which he would later write and direct). The visuals were amazing, but sterile, lacking the warmth of humanity that Scott, Cameron, and even the bits of Fincher that survived the studio edit allowed. There were parts that were downright silly and the ending creature laughable to the extreme.

They killed it for me. I'm sure they didn't mean to, but they did. AvPs could come and go for all I cared. Alien was a dead franchise.

And right then, like they sensed my ballsack had healed up, in 2011 they started talking Ridley Scott might be coming back to do a "prequel" to the Alien franchise. Those three words got me to invest again.

But just like a battered romantic who will go back to their abusive ex, I should have stayed away.

Lost. That's what you get if you watch his TV show. It says it right there on the label. Hours of your life will be LOST. You will never get them back. And none of it will make sense.

Just like his two plus hours of Prometheus makes no sense either. There are many places you can go to on the net that will sum up the stupidity found in his film script or try to come up with a rational explanation, but I can think of no better place than Everything Wrong with Prometheus.


And while we are at it…Here's the Honest Trailer.

"An epic quest that has no answers or payoff to anything…"

Sums it up perfectly.

It sought to be a "big idea movie" about the philosophical questions of who made us and why we are here, but failed in that it frequently had no idea how it wanted to answer those questions at all. Not that it had to, but to be entertaining, it should at least have asked those questions in a new or stylish way. The movie fell apart under close inspection. Individual scenes came across as not logical given how characters acted moments earlier or plot contrivances created unlikely events. It broke with suspension of disbelief.

Most of all, however, it failed to entertain.

It was pretty, but in that regard so was Suckerpunch. Painting both with the same broad brush may seem wrong as Prometheus at least pokes at some hard questions, but they are really just window dressing with nothing underneath. That last part sums up the plots of both movies, deep questions or not.

I hated it and vowed never to go back to the series again. Yet, I'll have ticket money in hand on Friday. Because…the franchise owns me, I suppose. I've even been poking the copies of Alien vs Predator DVD two packs at Half-Price when I go by.

So it is with great dismay that I tell you this Prometheus comic is sort of like the movie. It has some characters making some really weird decisions that do NOT make logical sense. This first panel sums up huge parts of the book for me.

Even with the farty smell the book extrudes, I admit to enjoying some of this. The alien planet ecology idea made for some "fun" scenes and at least the book posed no questions it wasn't certain it could answer.

What we have here is a scout party from the Geryon. The Geryon set down on the same planet that the Prometheus was destined for, LV-223. They are a search party sent specifically to look for Prometheus since it has not reported back. As people who've seen that movie know, the Prometheus isn't there anymore. What they don't know is that the planet now teams with life.

They do find a smaller ship from the neighboring planet LV-426 that appears to have landed here at some point after Prometheus knocked the Engineer's ship out of the sky. And yes, I see that planet designation. Yup, they went THERE, back to the first two movies' setting.

This issue, farty smell and all, opens with them going through the airlock of the mysterious craft. They aren't prepared for what greets them inside. 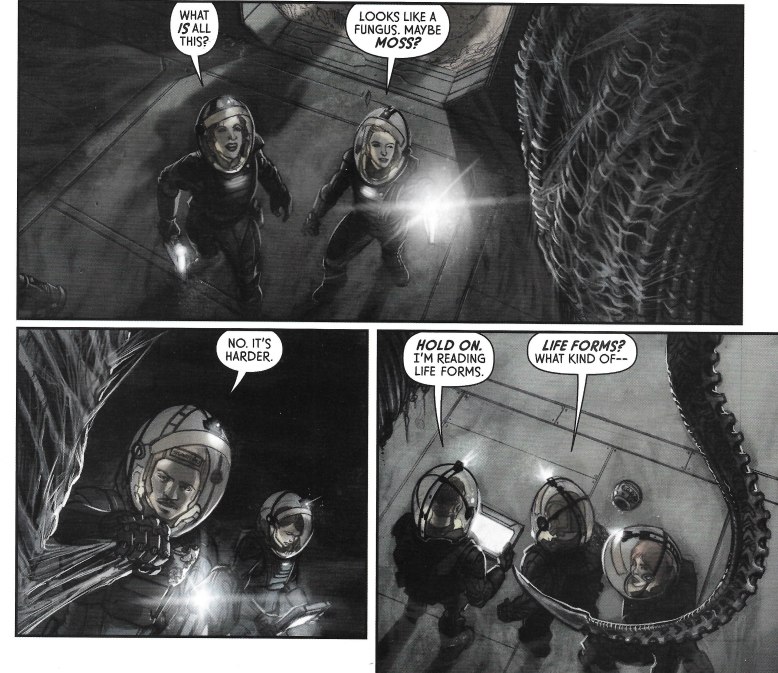 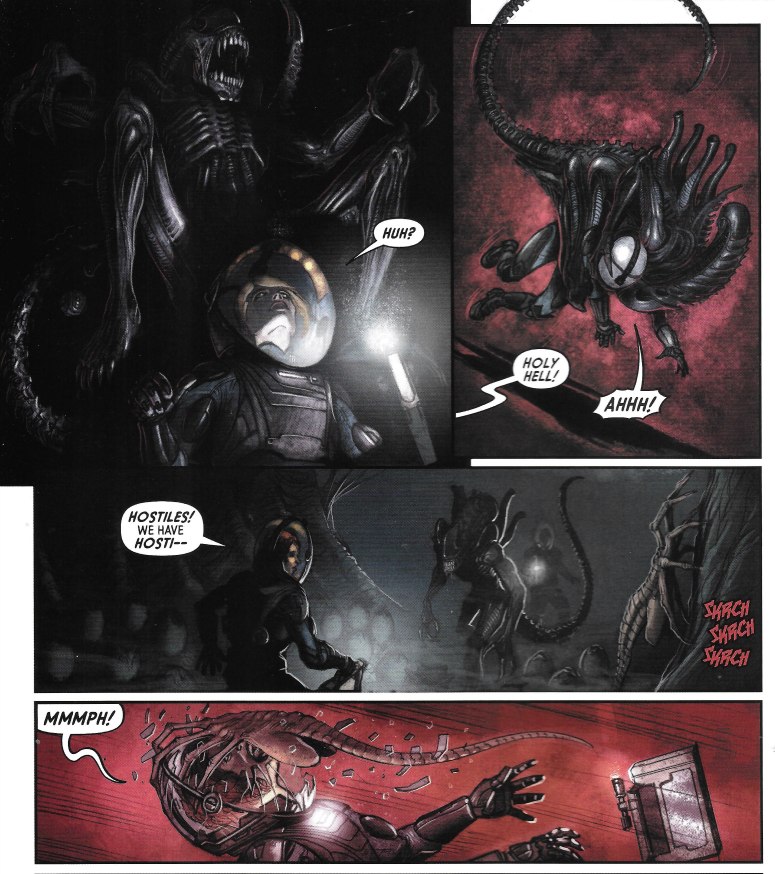 People die left and right, names are shouted, guns go "brakka-brakka-brakka." Nothing new here folk. Move along, seen it all before. 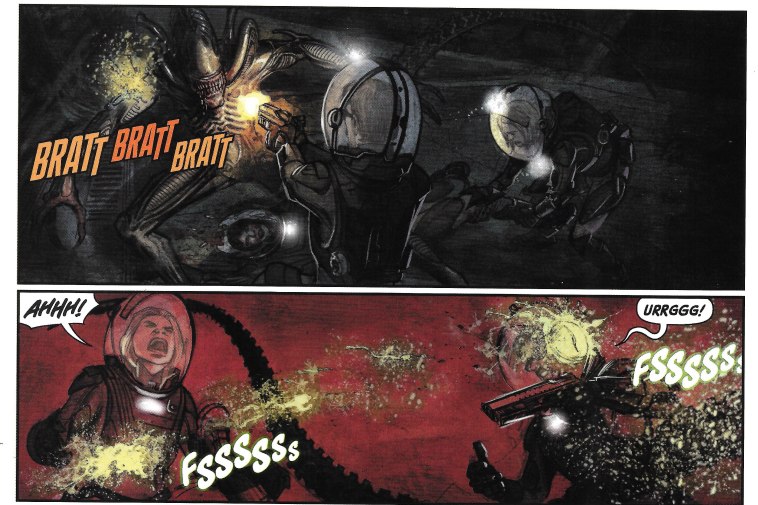 Oh, and acid! I forgot the acid.

In the words of Monty Python "Run away! Run away!" 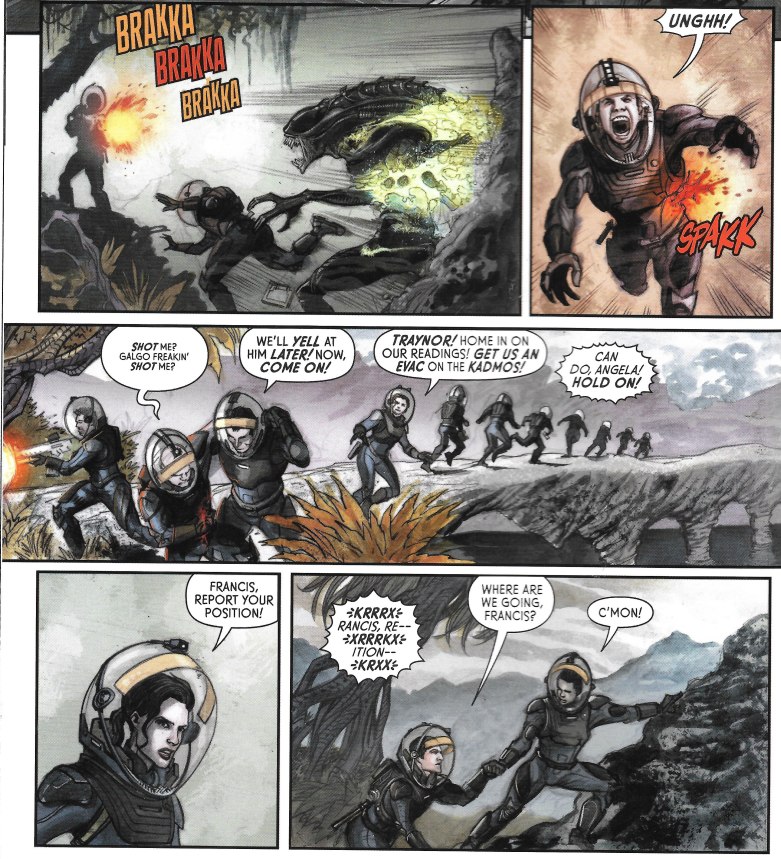 In the ensuing melee, one crewmember gets shot and two others, Francis and his synthetic friend Elden, break from the group. I'll let you in on a little secret: Francis is dying of cancer and came on this ride thinking he'd find a miracle cure.

Sounds almost as crazy as believing you'd find the fountain of youth, doesn't it.

What doesn't sound crazy is NOT following the leader across these crazy ass rock bridges. They don't look stable. 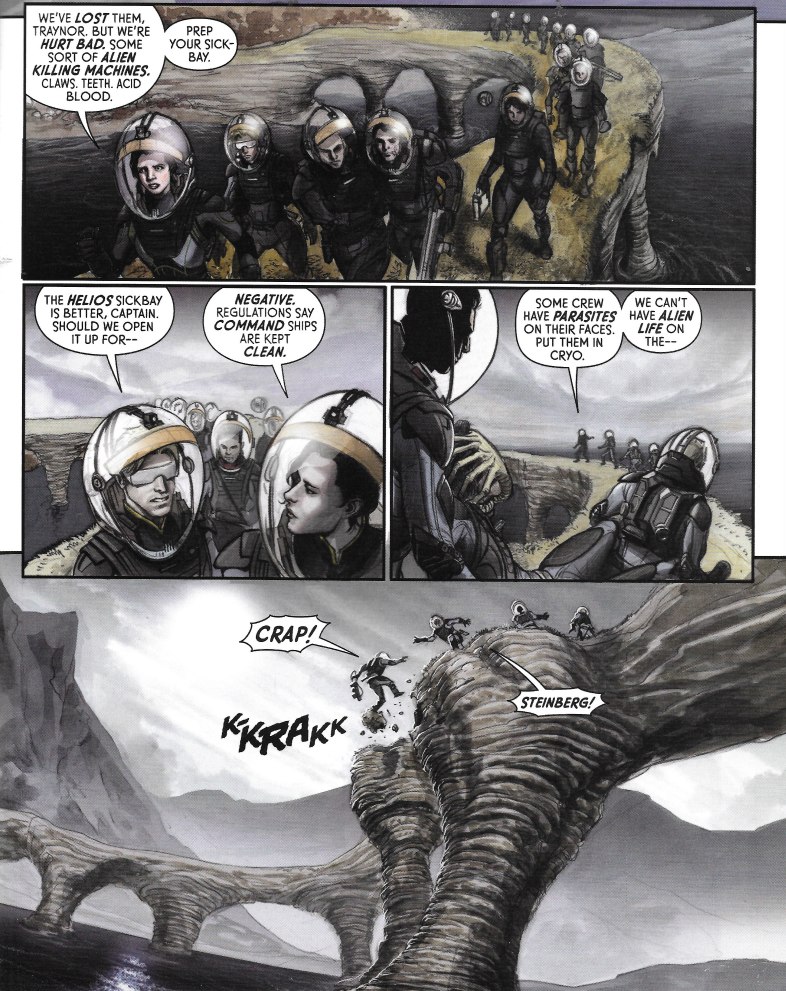 Oh, no! Not Stienberg! He was my favorite character so far. Seriously, I'm glad they brought so many people because they can kill off a dozen or so and I don't even miss them. 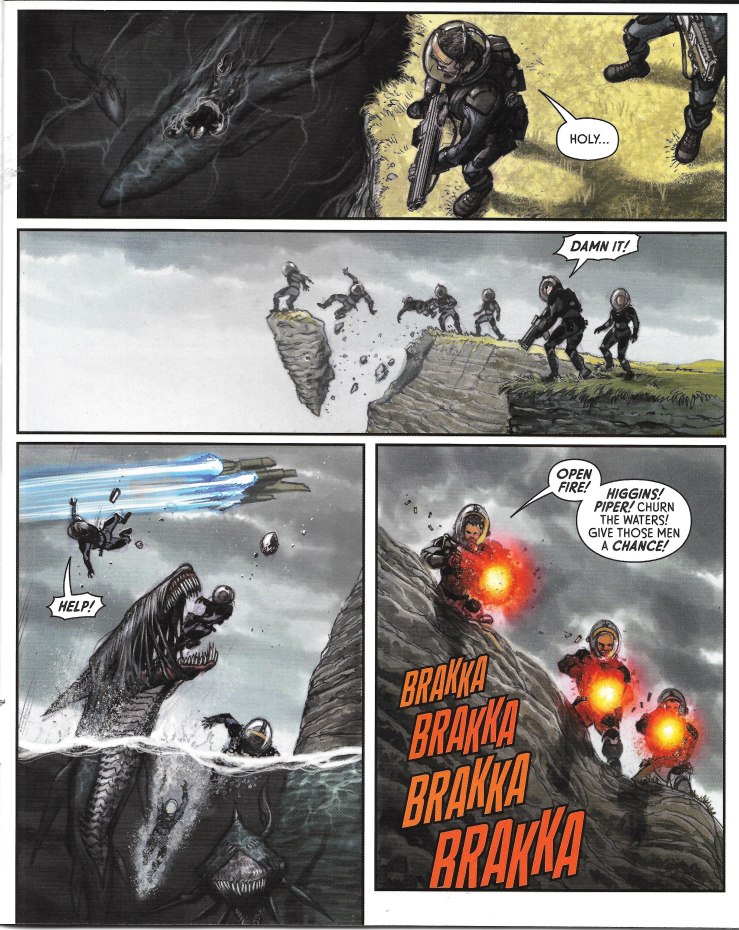 They just killed two more and I'm not even worried.

What is cool is that all the creatures on this planet appear to be Aliens based. That freaks me out in a way I can't describe. Imagine an entire biosphere of everything painted with Giger's Alien brush and you can see how that fires the imagination.

Eventually all this fun has to end. The main part of the group gets rescued and ends up back on the ship, where they decide that since they are safe that they should… 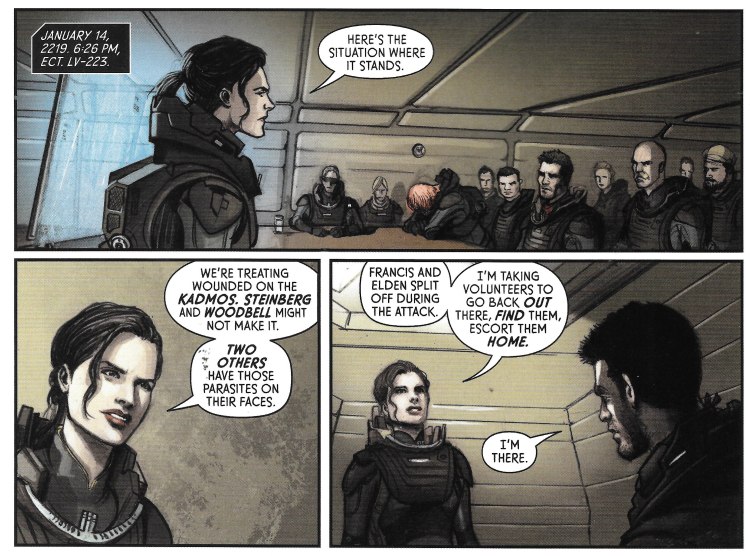 Go back outside because not enough people are dead. I love that this guy is all "I'm there." Which is idiot speak for saying "I need to die and haven't yet. Take me back outside with the acid spewing, razor teethed death machines. Put me in coach, I'm ready to play."

However SANE people like me have questions about this. Questions like: What? Why are we doing this? Are you freaking off your rocker? 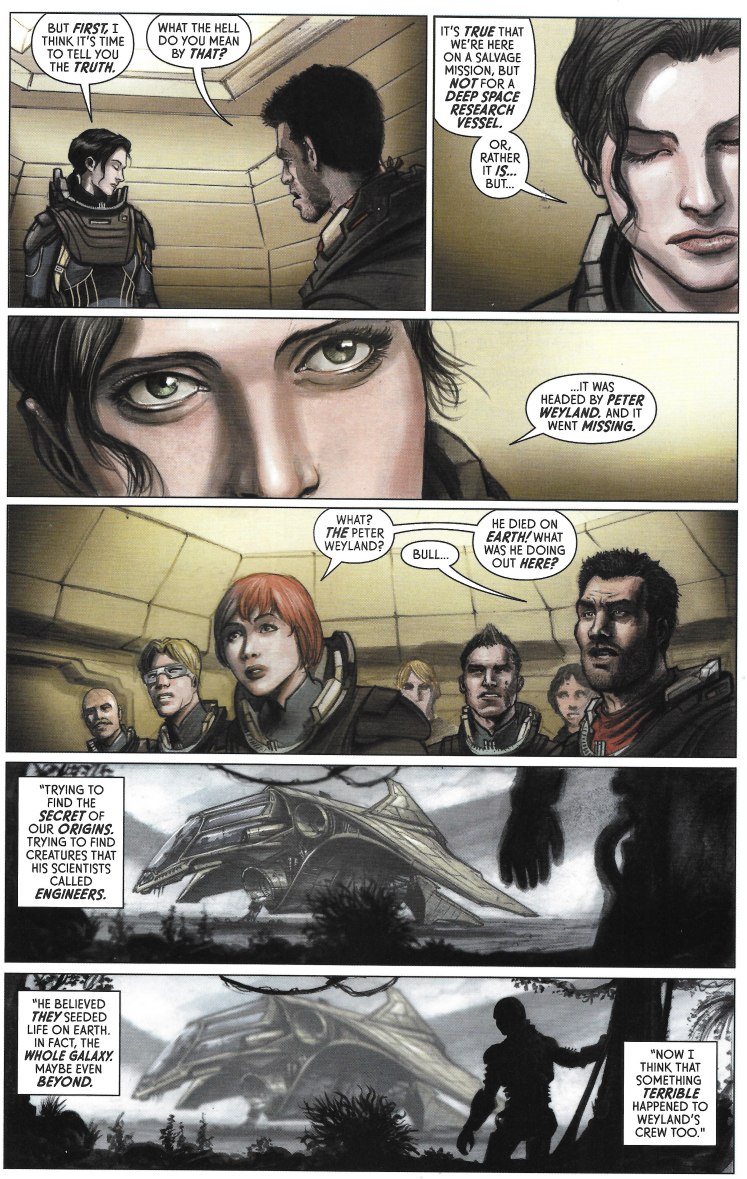 Oh, okay. MONEY. Find the owner of a giant mega-corporation and you get booku-bucks. No?

This is starting to sound too close to the movie for me. In fact, I think the comic goes a mighty step farther in actually answering the questions posed by the movie. It's not canonical, or anything, but at least it tries to tie up some of Prometheus' lose ends.

Somehow this makes everyone realize they've been throwing their life away for something instead of throwing it away for NOTHING and that makes them all mad. 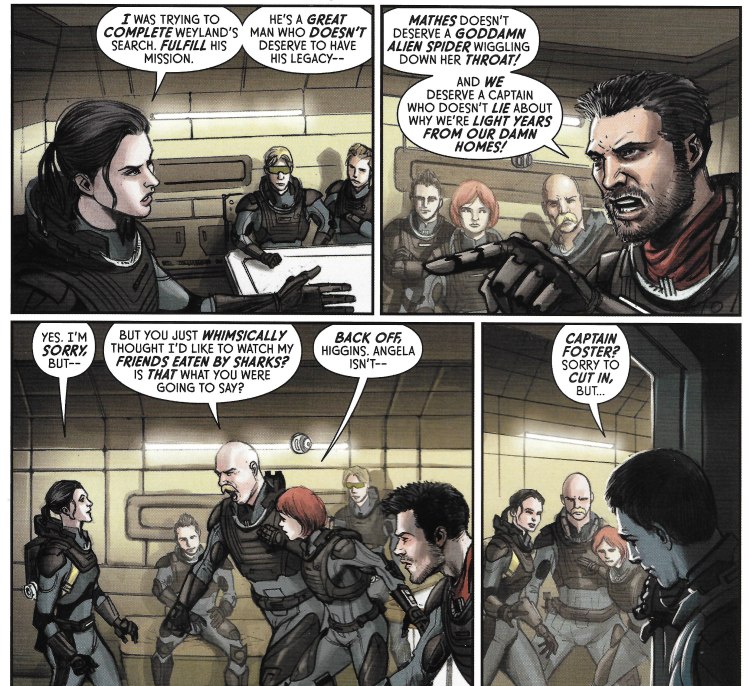 I don't understand this book.

The person cutting in has Elden and Francis on the radio. They've managed to find a cave where one of the survivors of the vessel they found was living. They guy left lots of notes and was obviously some kind of scientist. Notes about what you may ask?

Oh, that pesky stuff again. Please tell me they aren't going to mess with it.

The person in the cave prior to Francis also found the Engineer's ship and surmised that all the growth on animals and plants on LV-223 came from a spill of the accelerant.

Knowing they have team members to rescue is enough to get everyone to agree to a little death march through the jungle. So off they go to save two guys by getting everyone else killed. 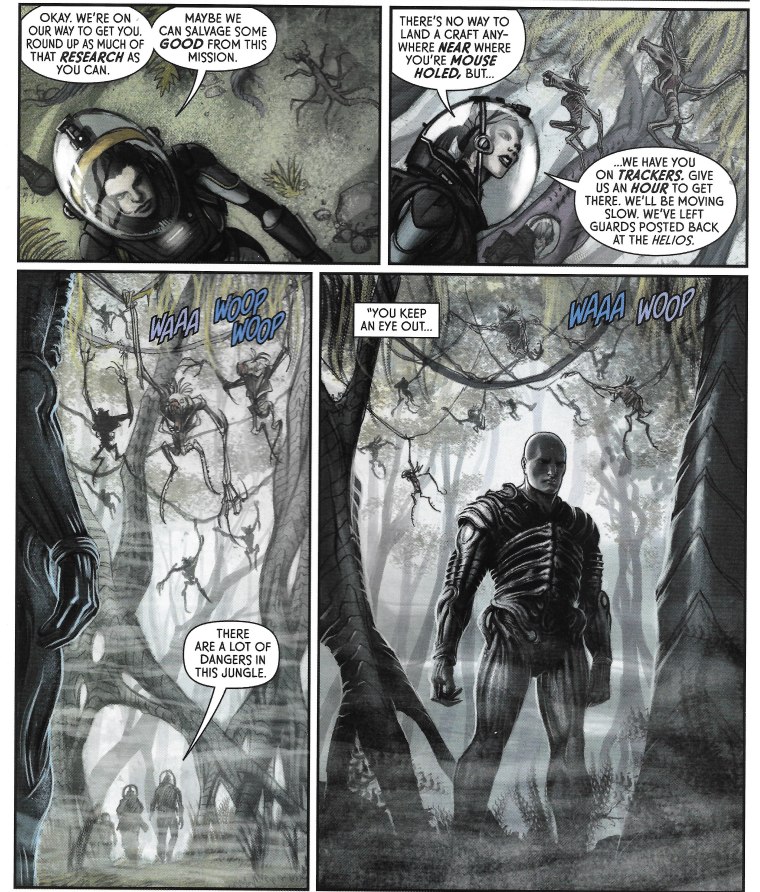 Note the trees are as thick with falling Aliens as they would be with leaves in Autumn. In a universe of bad ideas, going out of your ship into this forest is one of the worst.

Everyone in this book has a deathwish, too. Back at the ship, where people could be perfectly safe behind bulkheads and such, they leave the ship and wander around trying to get killed. 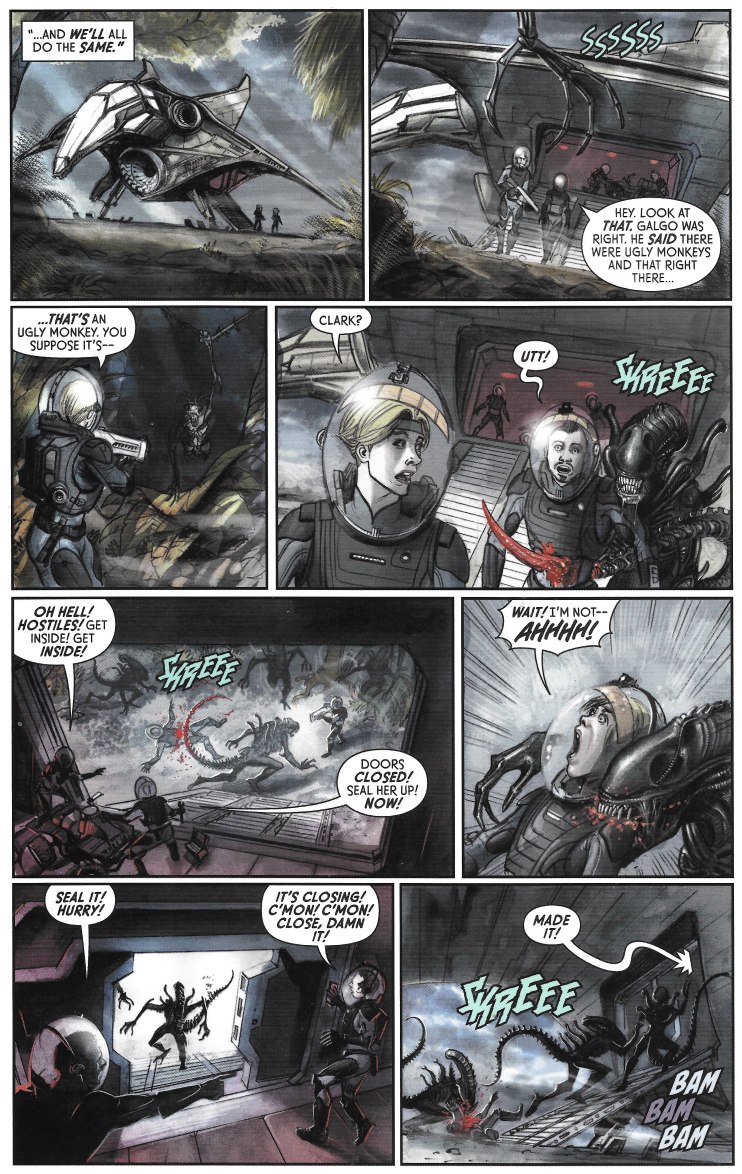 And some do. I…I can't even anymore. Stay in the ship, retards. You have one job. Don't DIE.

Meanwhile, Francis has got a wild look in his eye from reading all the scientist's leftover notes on the black goo. I'll let him explain. 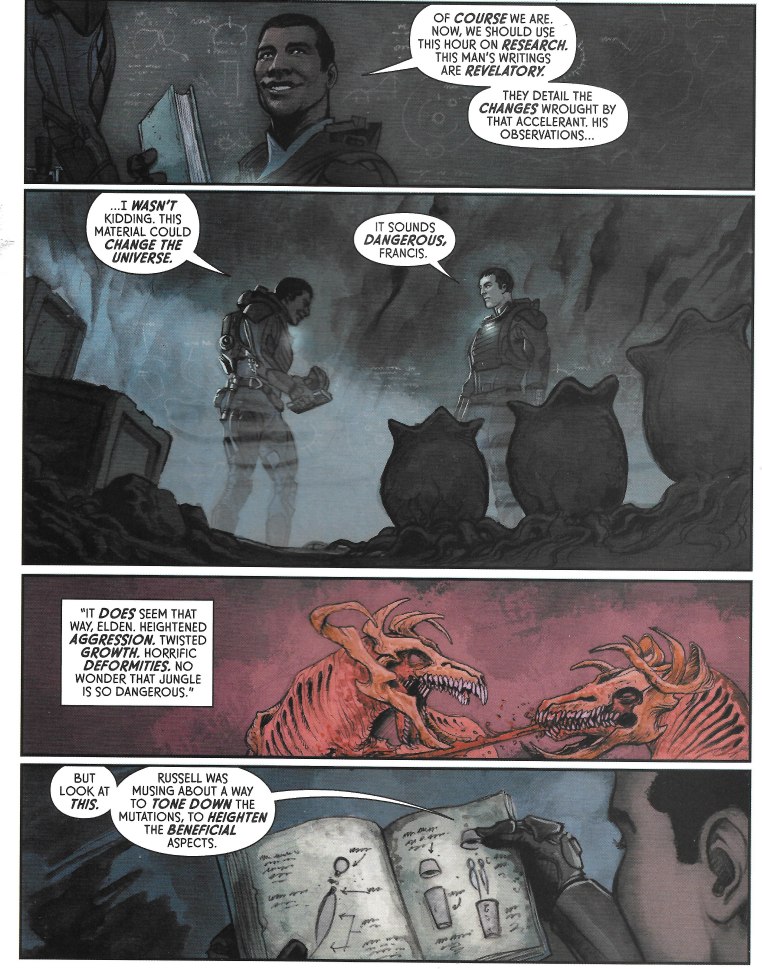 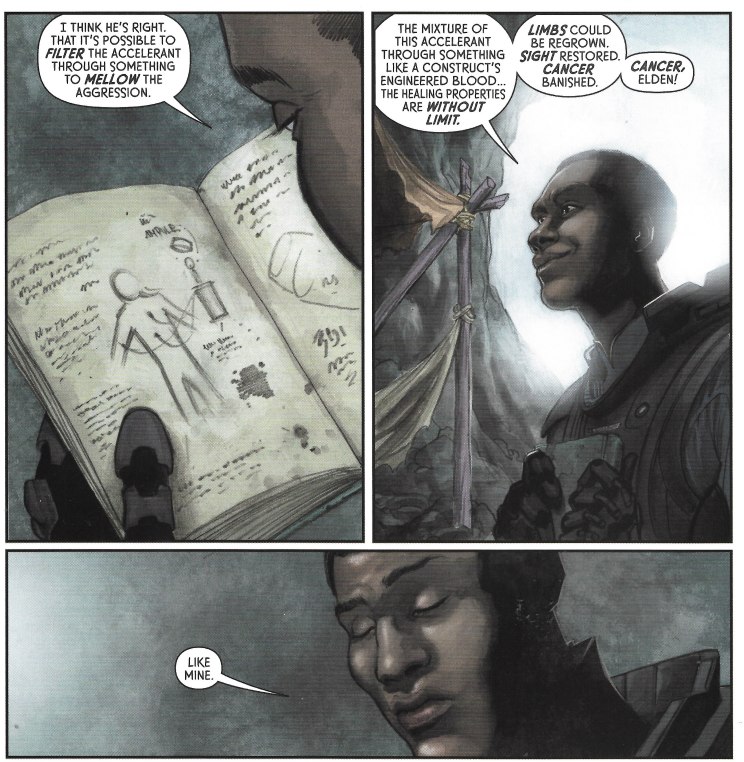 It doesn't quite work like that. I mean not unless you want your legs to bend over your head at an odd angle while you change into a murderous rage-zombie. We've seen this. Not a pretty sight.

Being a synthetic person, Elden doesn't see where this might be going. 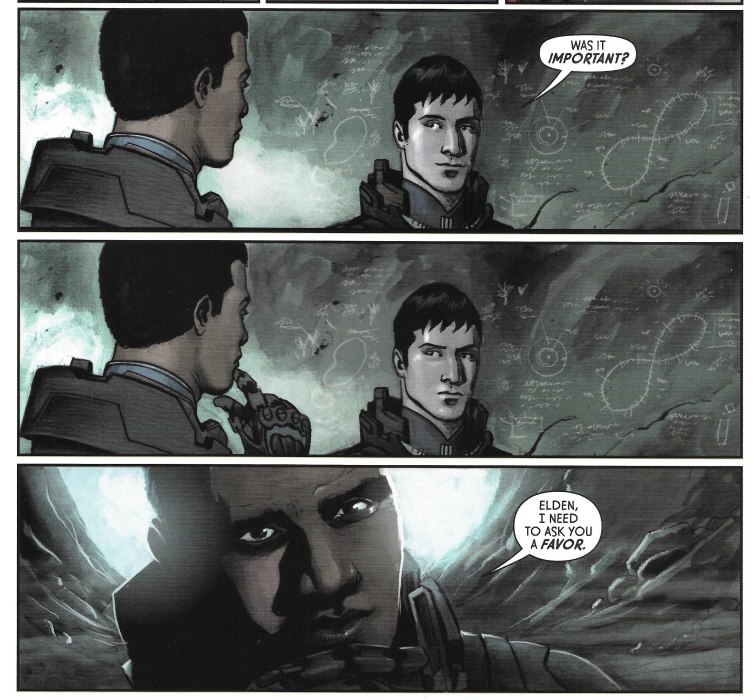 This happens as the captain makes the discovery of the crashed Alien spaceship that Francis was talking about. Since no one in this story has any sense, they look for a way into it…because none of them have died on this march yet and it's past time for a fresh body. 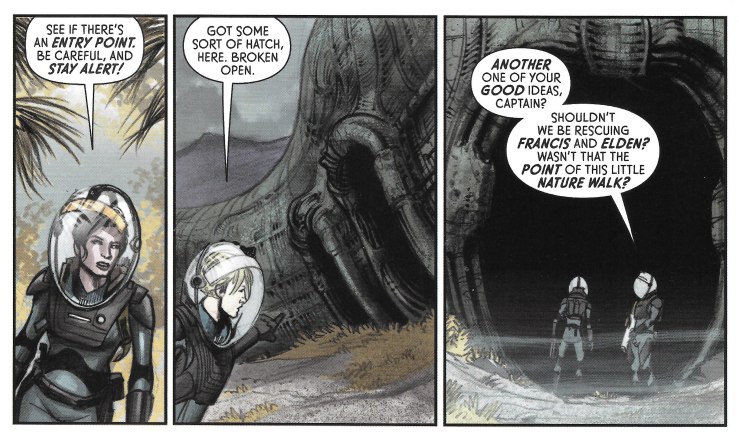 Okay, that one guy has the brains enough to question how smart this is, however he's going into the craft so surely he's going to find… 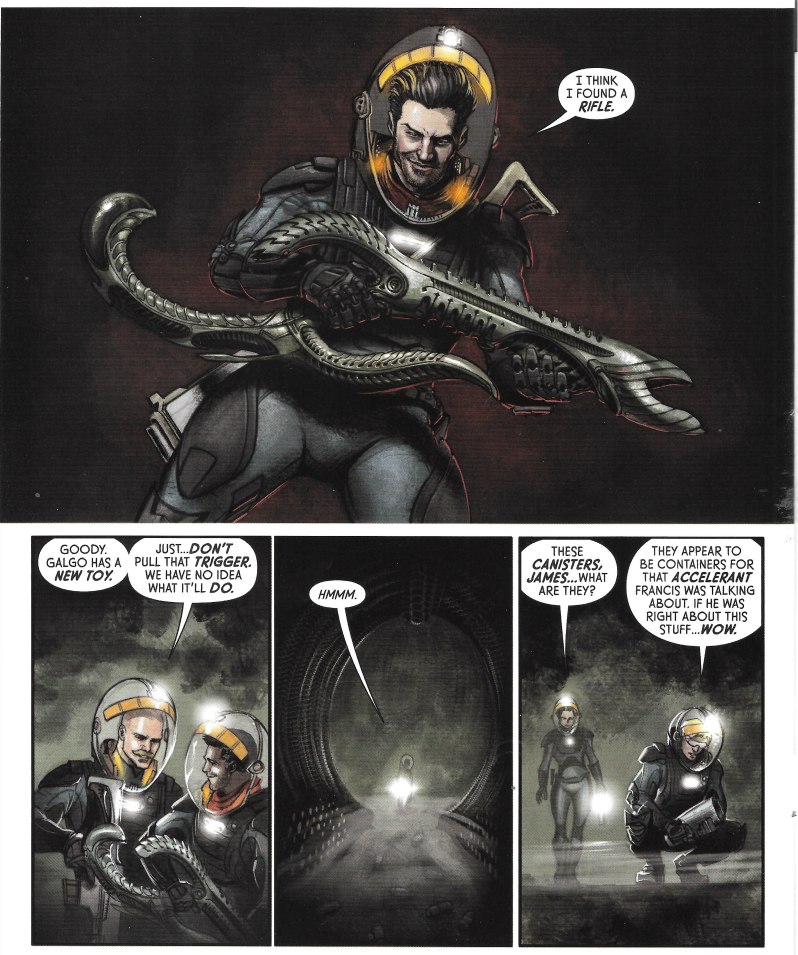 Well…THAT was unexpected. Wonder what it will do when fired. His luck, it is NOT a gun, but some kind of Alien garage door opener.
We'll never know, as I don't have the next issue and the story shifts back to Francis who has convinced Elden to help him with a little experiment involving the black goo… 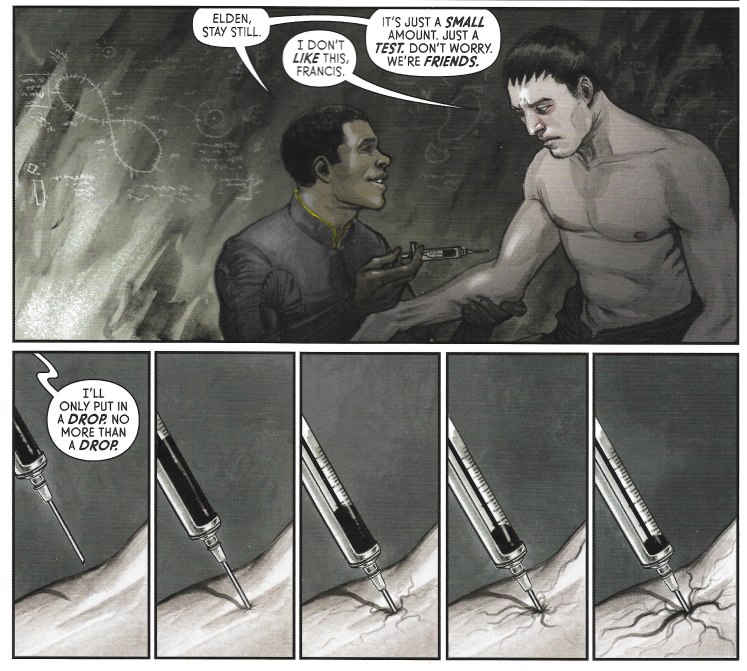 DUDE! That is way more than "just a drop."

So the predictable results happen… 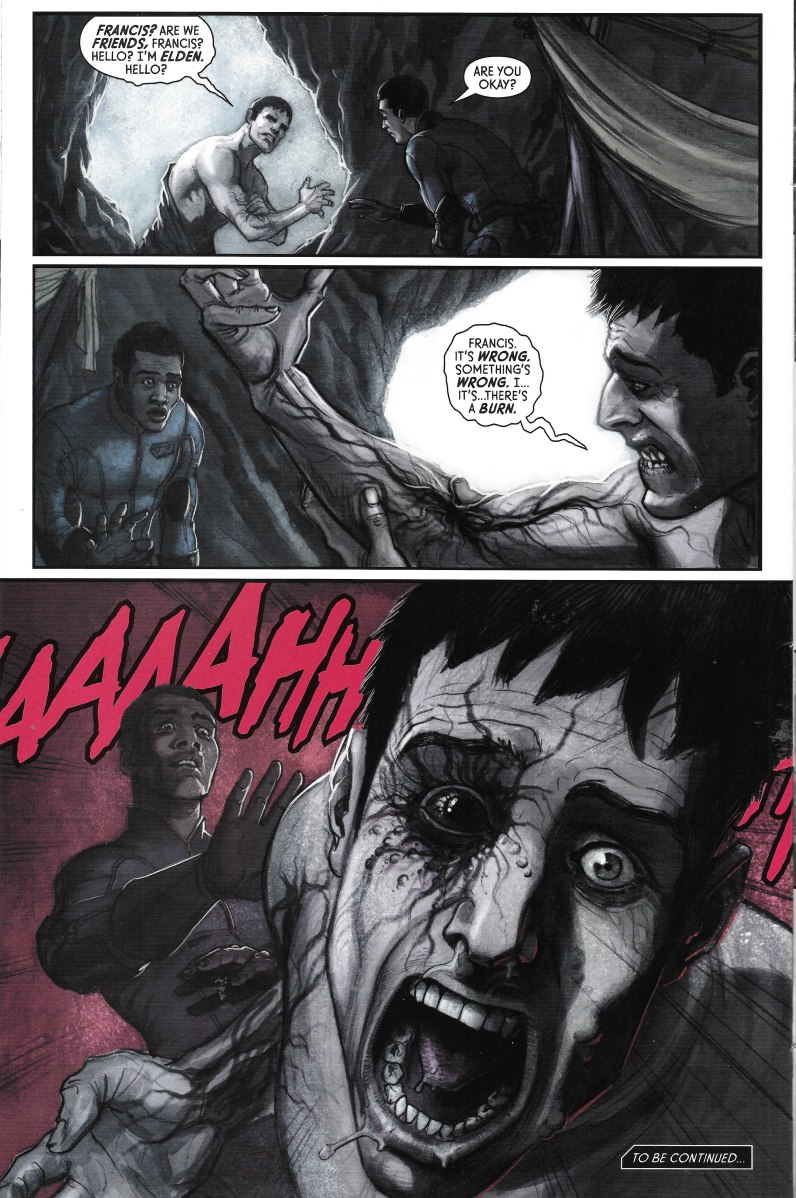 Wondering what becomes of Elden and Francis? Stay tuned. I don't have the next issues of this series, but I do know what happens to them. We will explore that tomorrow.

As for this issue: Way better having a planet teeming with Alien lifeforms as the story setting. That was the interesting part, not all this crap about the black goo and using it to cure cancer. That's just silly. And for how silly, tune in on Friday.
Posted by SonOfCthulhu at 3:30 AM