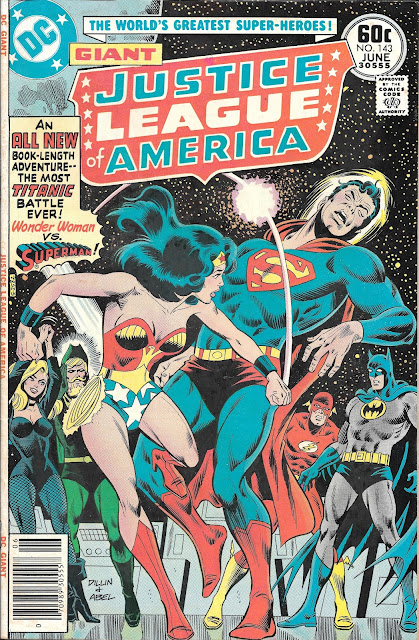 Sadly the very same month that the Wonder Woman story I just gushed about was published, this turd of a JLA story featuring Wonder Woman debuted after having been cobbled together by one of my least favorite story writers.

I am NOT a fan of Steve Englehart. He may be a great guy, but I have seldom read an enjoyable story with his name on the title page. This one is no exception either.

It is a mess and features so many "nails on chalkboard" moments that it almost seems to step back and spit in the very eyes of Wonder Woman's more feminist creators. The book contains twice the number of pages as a regular comic of the day, so let's jump in before my time is up. We begin with Superman confronting Wonder Woman over how she appears on edge lately. 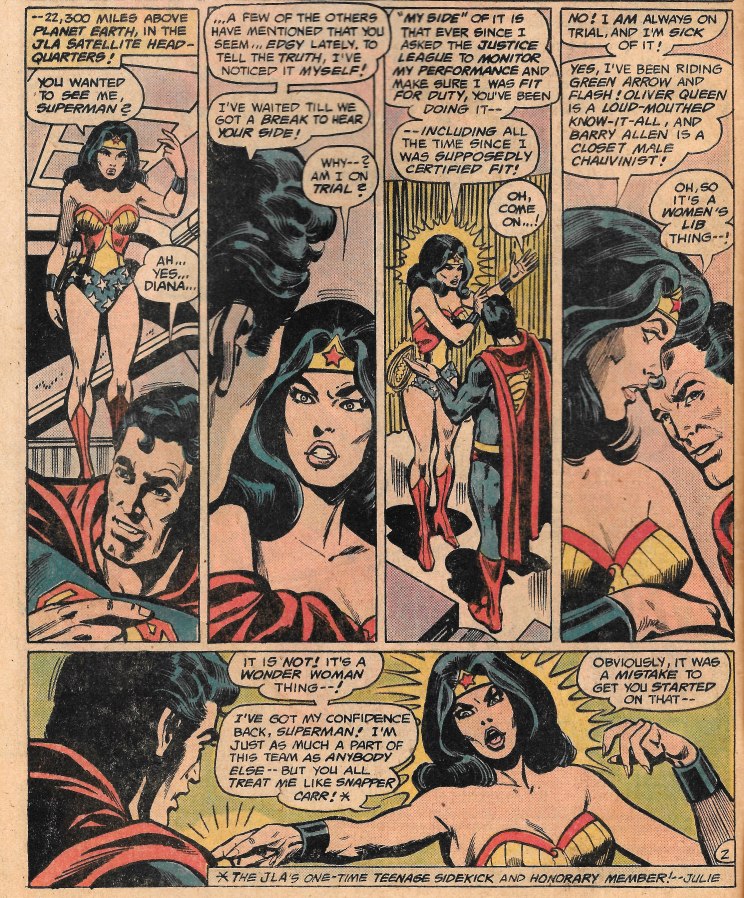 To which she flies off the handle and blames the other JLA'ers for ganging up on her. It's like she's on double-secret probation or something. Supes mansplains it as a "woman's lib thing," which suddenly has me actively hoping these two kick each other's teeth in for both being so childish. Instead…

Wonder Woman quits and teleports back to someplace that looks like New Jersey. While there she hears sounds of a clash and happens to spy Posion Ivy and Scarecrow leaving the scene of a bank robbery with a third guy in pursuit that she doesn't recognize. So she attacks… 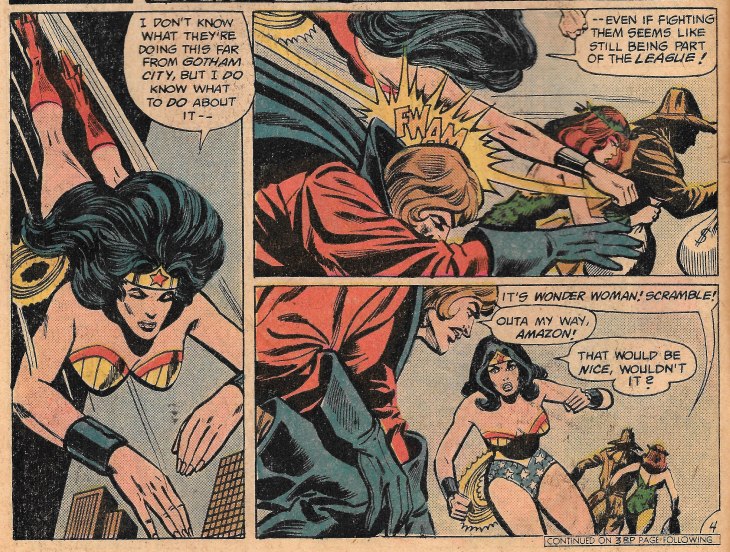 …the guy she's never seen before, who happens to be Mark Shaw, Manhunter, now Mark Shaw, Privateer. We met Mark back when I reviewed the Suicide Squad issue featuring the Millennium crossover. How dumb is it that Wonder Woman just lets the known criminals walk away? Well, the "story" tries to explain that away in just a bit. 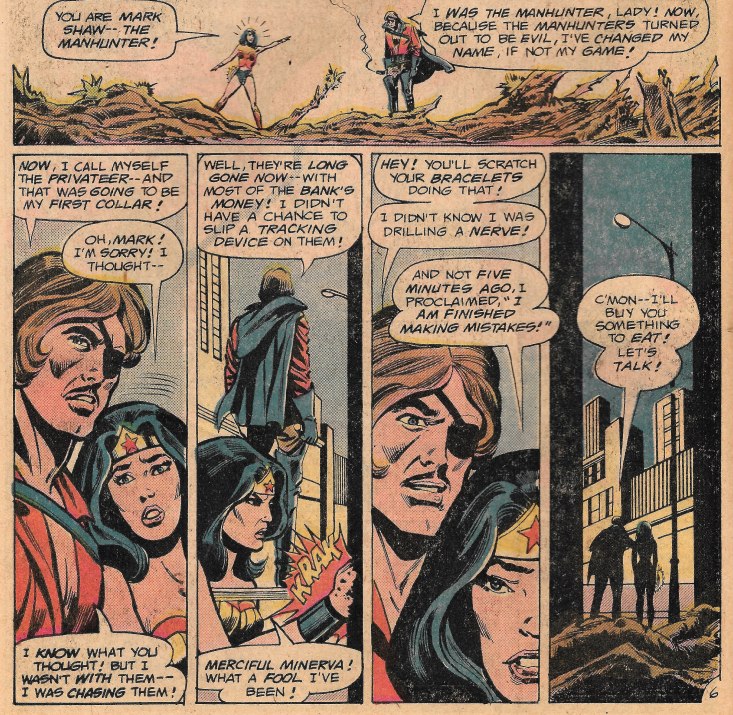 Then Wonder Woman does something VERY unlike herself. She blames herself and acts like she has no self-confidence. I don't like this. Not one bit. I'm used to a capable and strong Wonder Woman. This isn't like her.

The source of these frustrations start counting their ill-gotten loot and reminisce about how good they had it when they were in the Injustice Gang. After a few moments of back and forth, Ivy and Scarecrow decide to head for the old Injustice Gang satellite to hide out for a time. 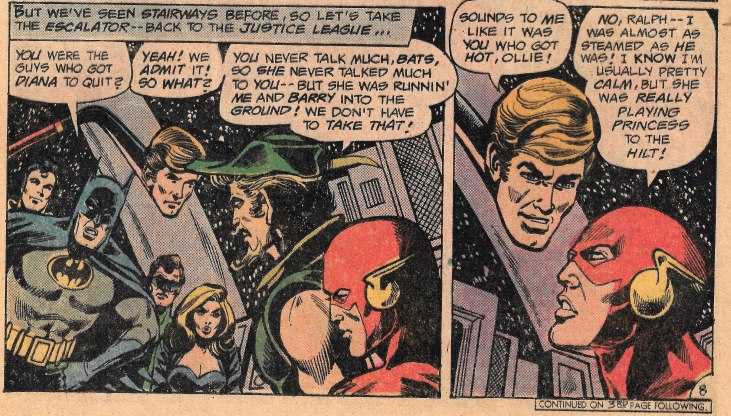 While his enemies go to ground, Batman grills the two heroes Wonder Woman accused of being most on her case. Both Barry and Ollie appear to act the part of children caught with their hands in the cookie jar, blaming Diana for all the trouble because of her stuck-up attitude. It is embarrassing to see the heroes acting like this when the villains had two pages of working so well together. Feel like I am rooting for the wrong side. 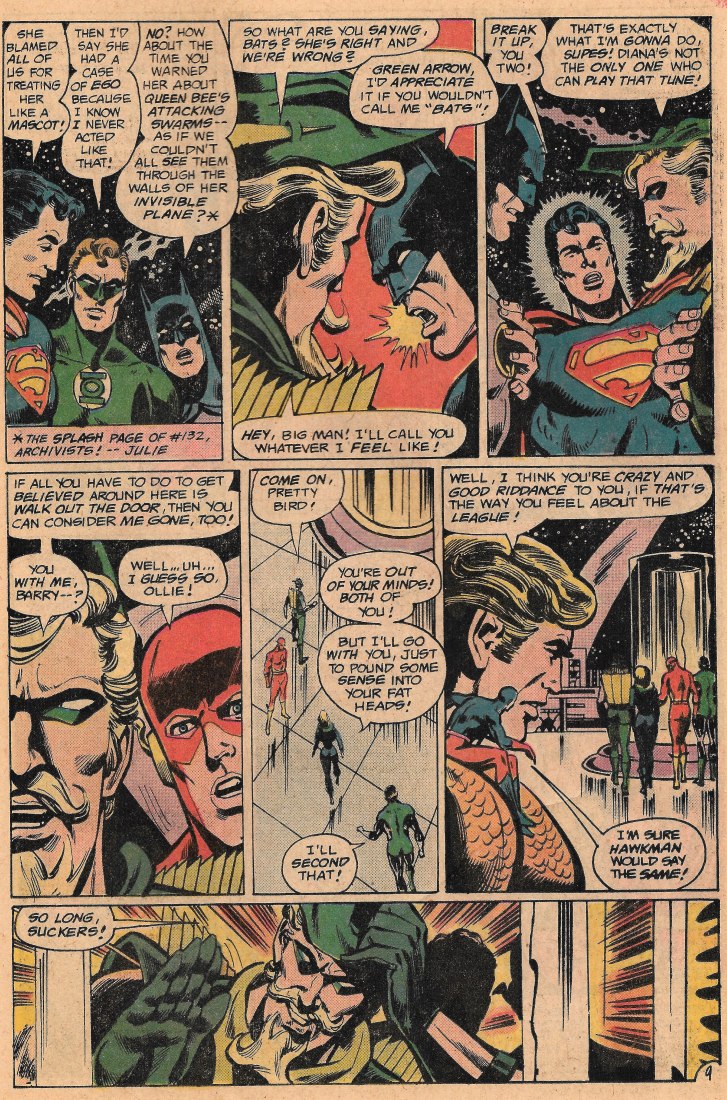 I thought the league bickering like children didn't start until Giffen's run. Guess I don't know the old league.

So everyone splits up, but not in the usual "we have three things to guard at one time so everyone join a team so the writers don’t have that hard of a time balancing out what Aquaman will do" kind of split. No, this more of "I can't stand to look at any of you right now" kind of split.

Superman gets all mopey after everyone is gone, bending one of Batman's ears. 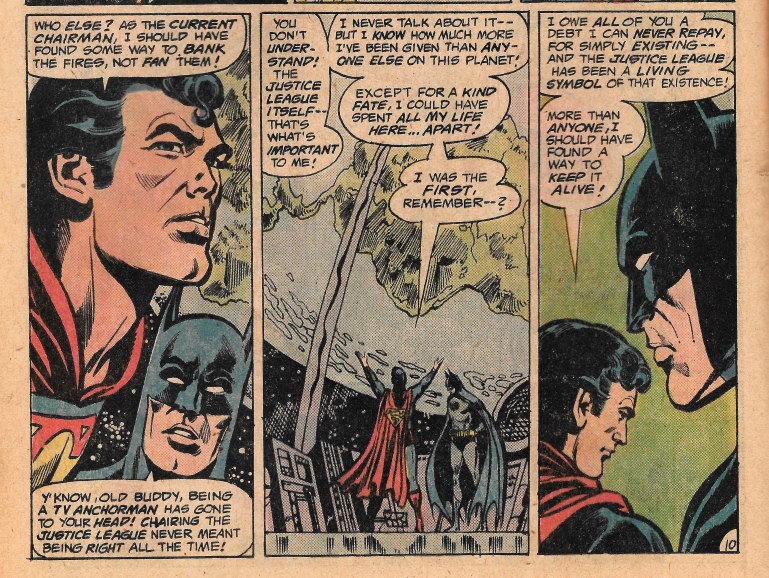 Meanwhile, Wonder Woman is dining with Privateer when she suddenly gets all touchy… 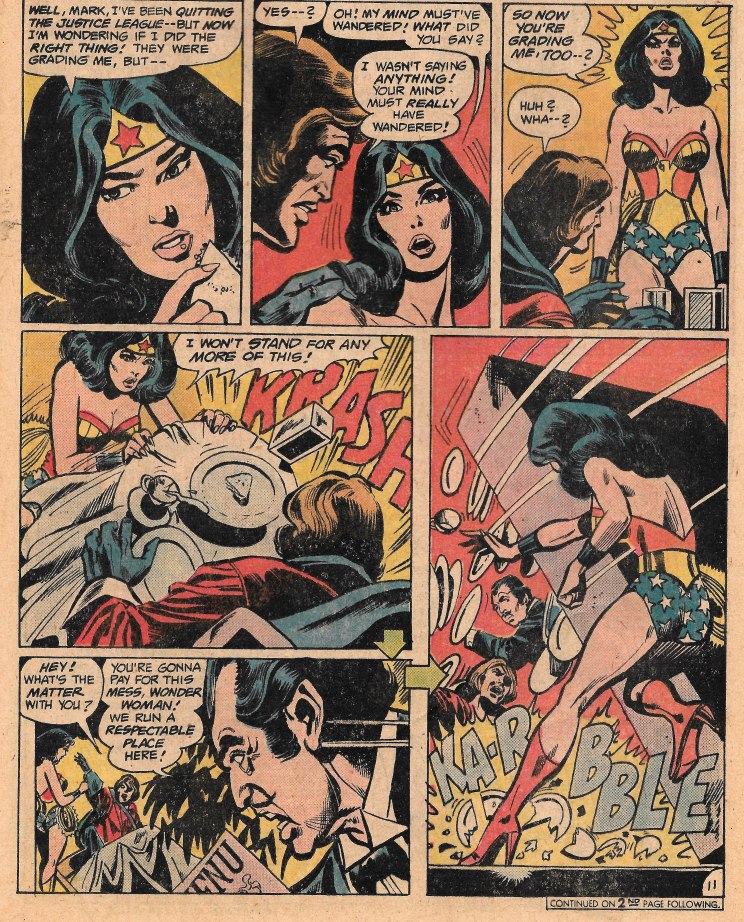 I'm going to spoil it for you: mind control. She is supposed to be mind controlled in all this, however Englehart has done such a botch job on the writing that everyone appears to do things for no readily apparent reason. But yeah, she's literally not herself. We will find out who is doing it in just a few. But first she attacks Mark again. 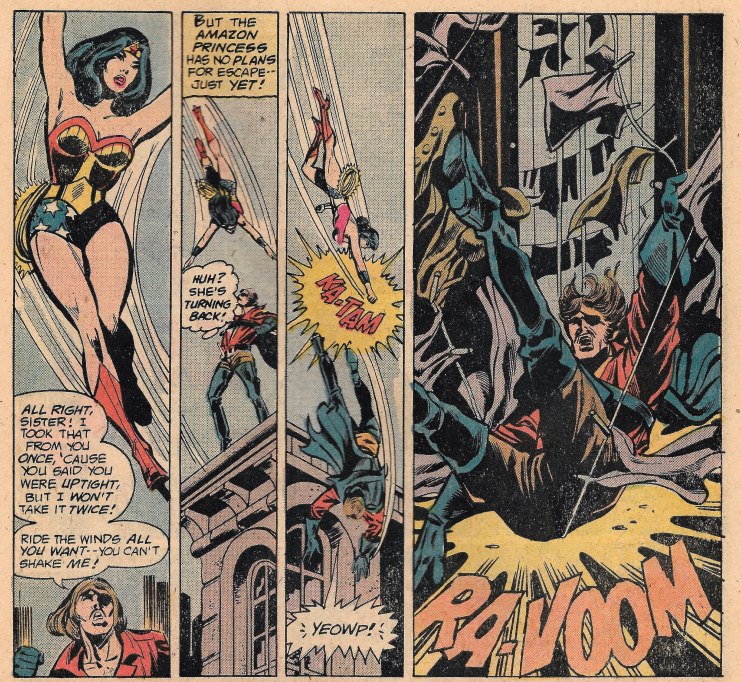 Punches him off a building to be exact. That's not very nice. Shaw survives this without being injured, by the way. I know all of you were so worried about him.

And here is where we get the idea that Wonder Woman is under mental attack, as she zooms away, she has a fit and flies herself into a building. 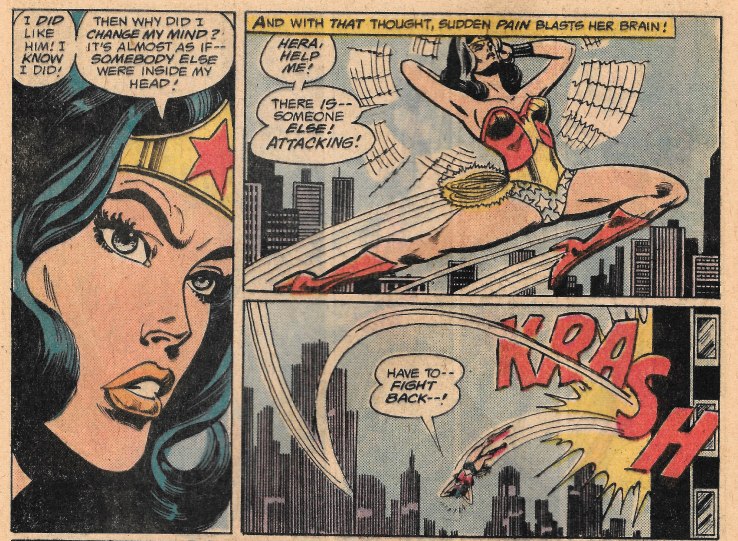 She passes out in an alley way and wakes up with zombie eyes to wander off to a secret teleporter that ISN'T the JLA's. 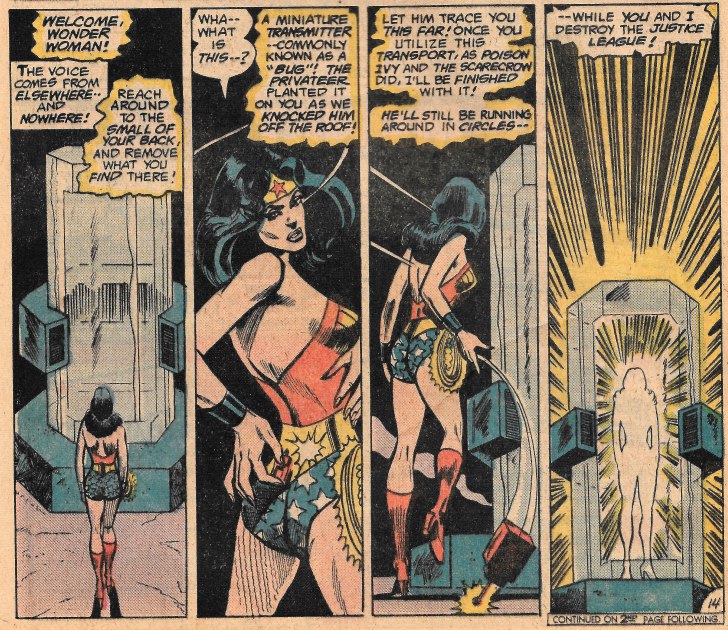 Mark Shaw bumps into Batman while looking for the hidden JLA teleporter so he can report Wonder Woman's strange behavior. They team-up to find her after radioing a worried Superman.

The object of their search appears on the Injustice Gang's satellite, to the shock of Scarecrow and Ivy, who soon come to realize they were mind controlled too. Meet the villain of our piece, Construct II. 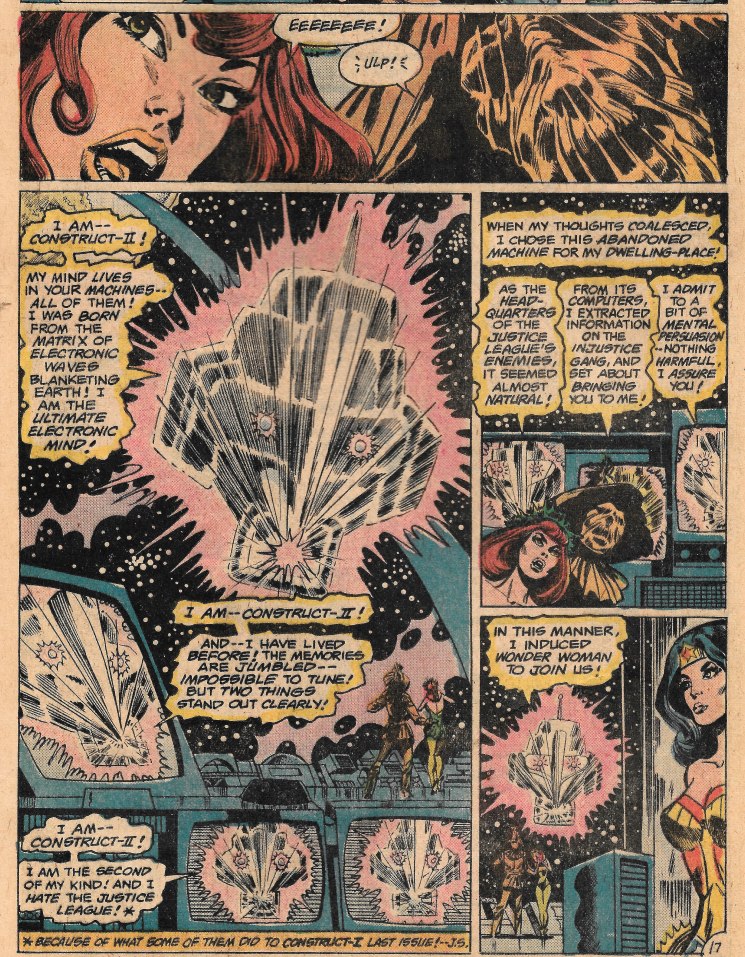 So basically a glowing pink hologram of a floating toaster. Think about how long we've had evil robots that live in our machines. This was 1977, folks. We didn't have "smart" anything back in 1977. Yet we still had the fear that our appliances would kill us.

Possibly the lamest villain ever, and he's a sequel, gets Wonder Woman to help plan how to take down the Justice League. Wonder Woman states that she'll take down Superman herself. 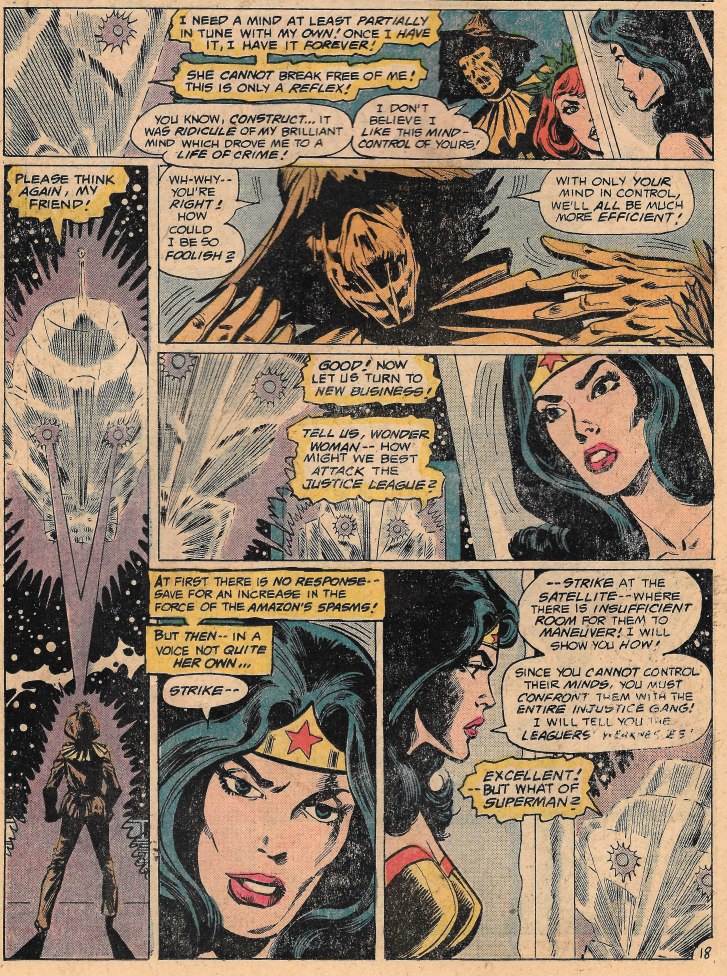 Aquaman is ice skating with Atom (on his shoulder) when Cronos freezes them both in their tracks. He straps Ray Palmer to a clock with a razor-sharp second hand designed to cut the frozen Atom to shreds but before that can happen, he vanishes too.

Hawkman and Hawkgirl encounter the Tattooed Man motoring across the lake on a boat. He attacks them with one of his tattoos and then disappears as well.

Batman and Mark Shaw follow the tracer Wonder Woman discarded to the building containing the transporter to the Injustice Gang's satellite. Suddenly Shaw pushes Batman to the ground as lasers start going off. One quick batarang later, they are both safe. Batman is troubled because, even with prep time, OMG! He almost got shot by lasers. 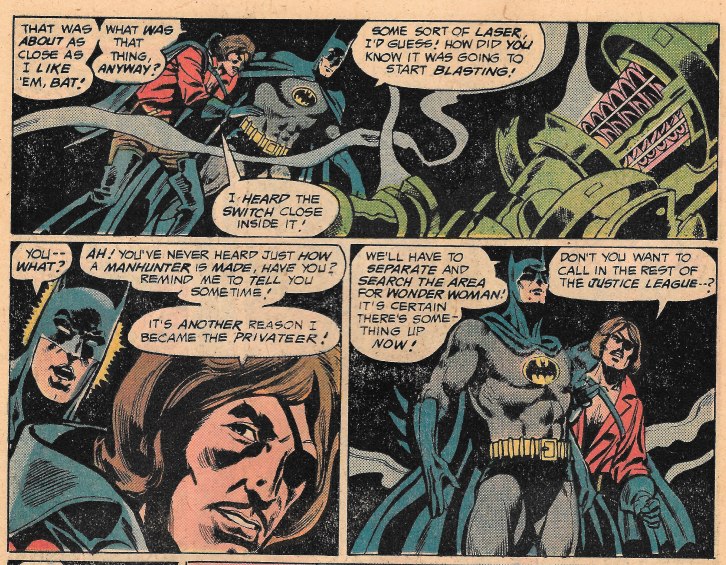 Shaw has the special power of "hearing switches." *sigh* Okay, let's leave this one alone for now. Oh! And Batman says no to calling in the Justice League.

While all this is occurring, the bout we were promised on the cover begins to unfold. Mind controlled Wonder Woman arrives at the JLA satellite. She makes nice with Supes first… 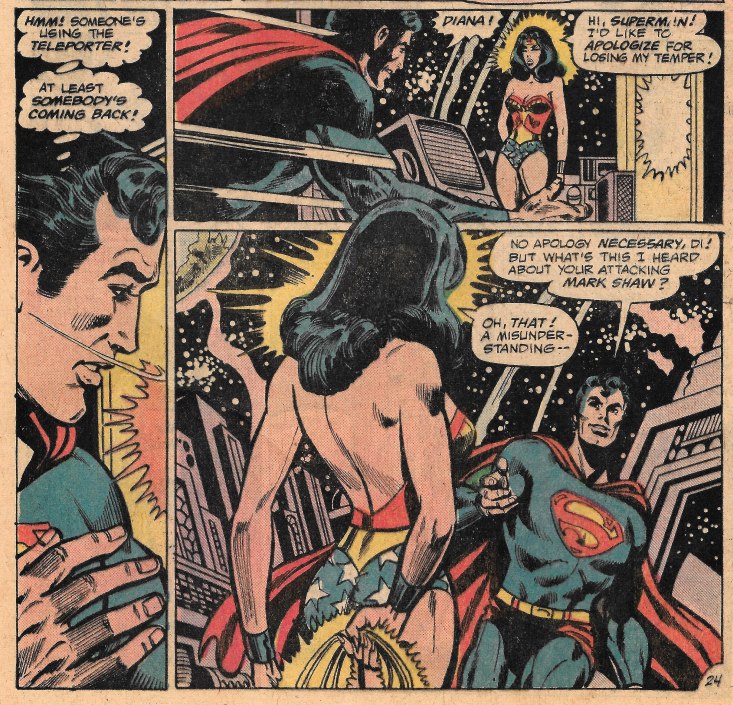 …then tries to lasso him, but he scoots out from under her magic rope. 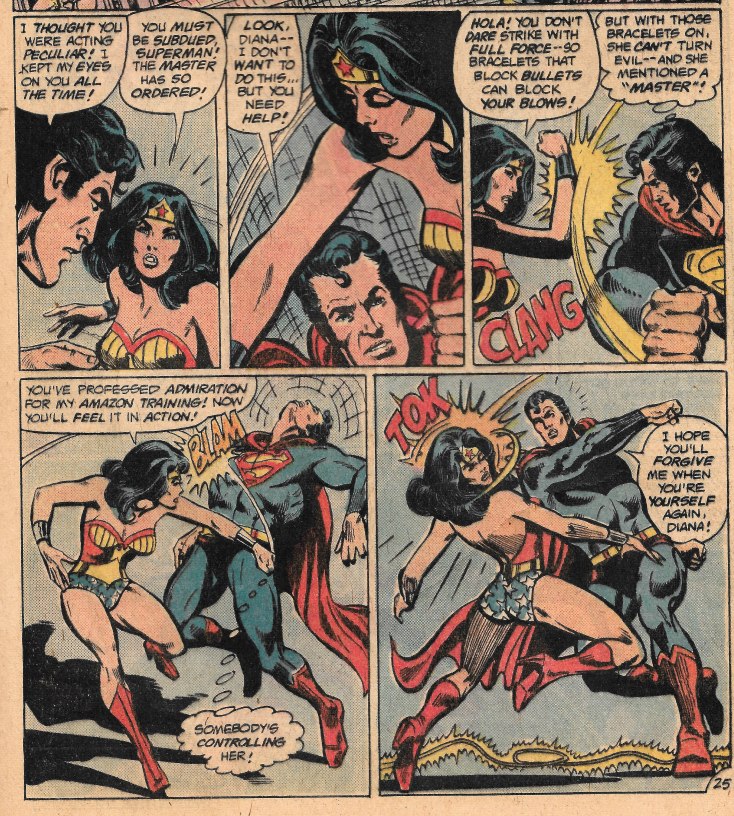 …which is less thrilling than anticpated… 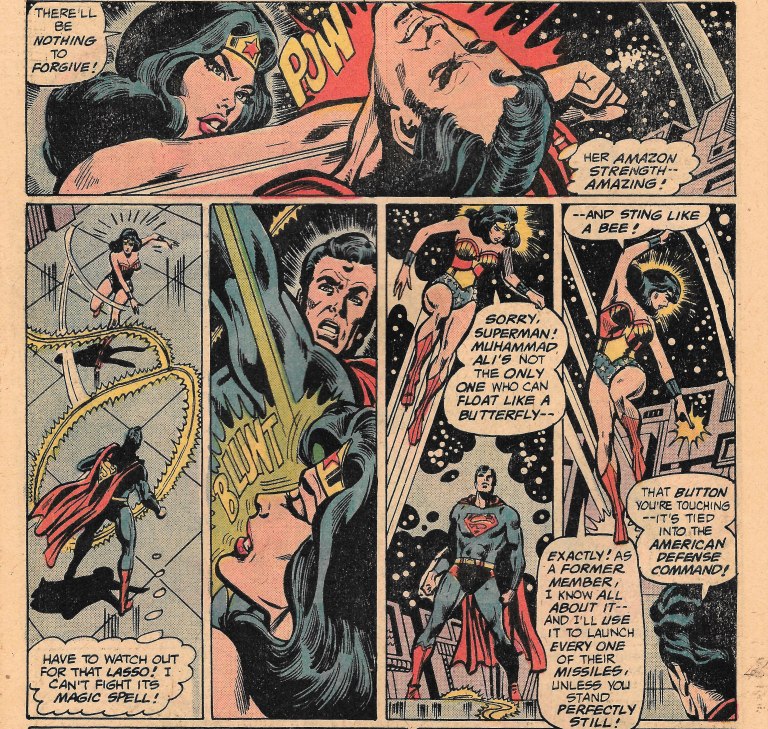 With Superman helpless against her magic lasso, Wonder Woman contacts Construct II who tells her…

…but Superman can see that she is straining to break the mind control. 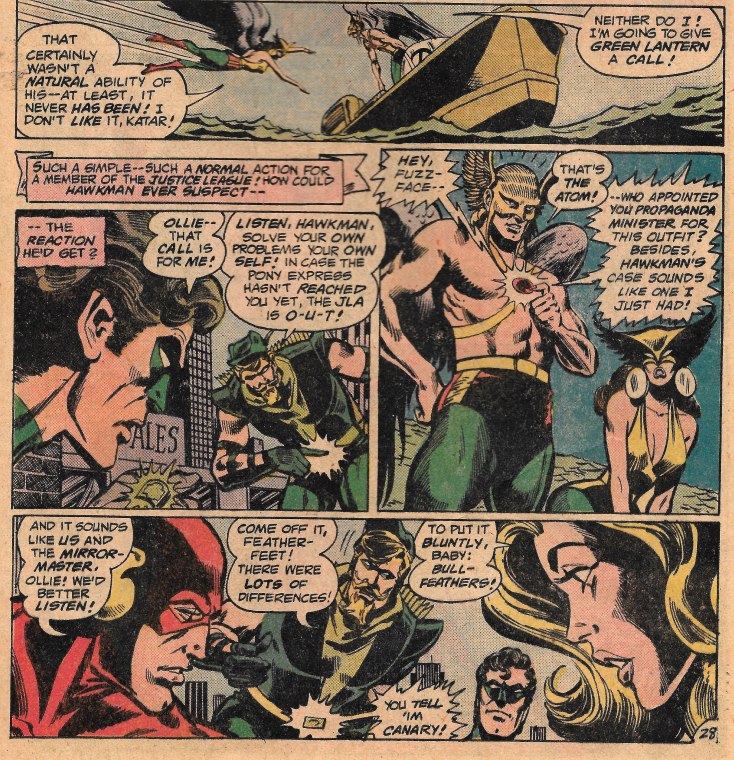 Meanwhile the other Leaguers finally start working together (just like the only other female in the group mentioned they should) and they come to the correct conclusion that the Injustice Gang has reformed. Wonder Woman is fighting for control, but not out yet. Her Lasso compels Superman to make a call that will lead the rest of the League to their doom. 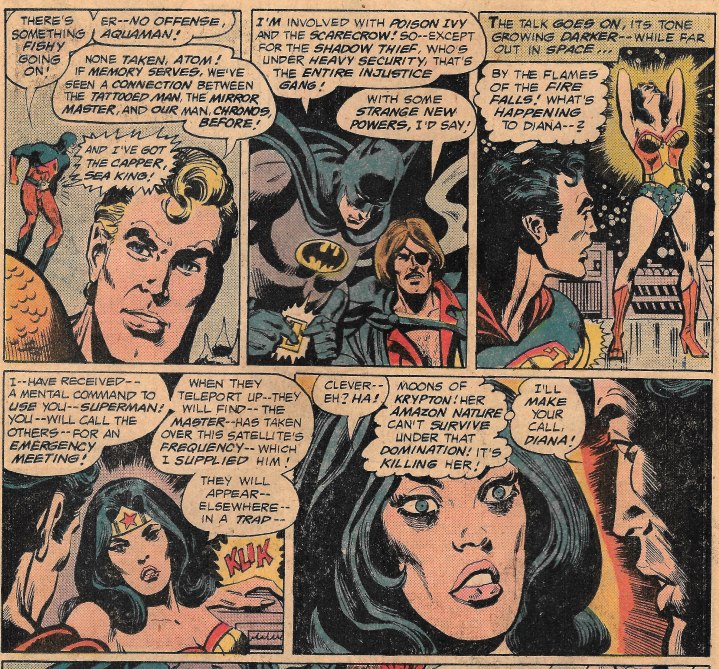 The League is smarter than that. Tipped off because Superman says "our last meeting" casually, they use Green Lantern's ring to head for the Injustice Gang's base. No, that doesn't really make sense. I'm not writing this story folks, I'm just doing the review. Yes, I know Englehart doesn't always have understandable character motivations. Anyway… 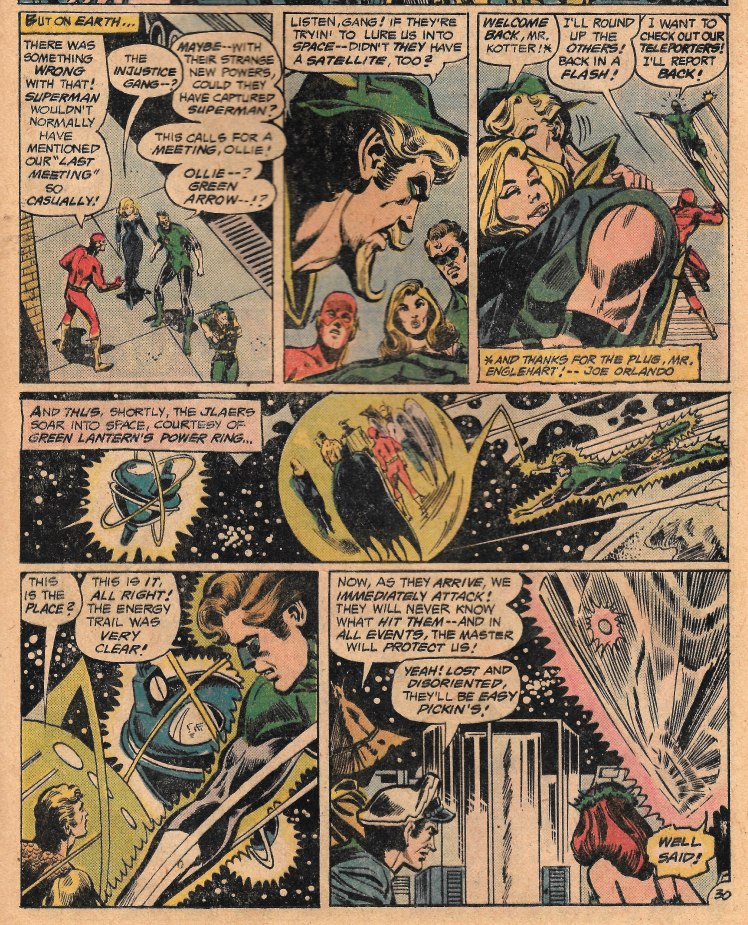 The Injustice Gang lies in ambush for the Leaguers arrival. 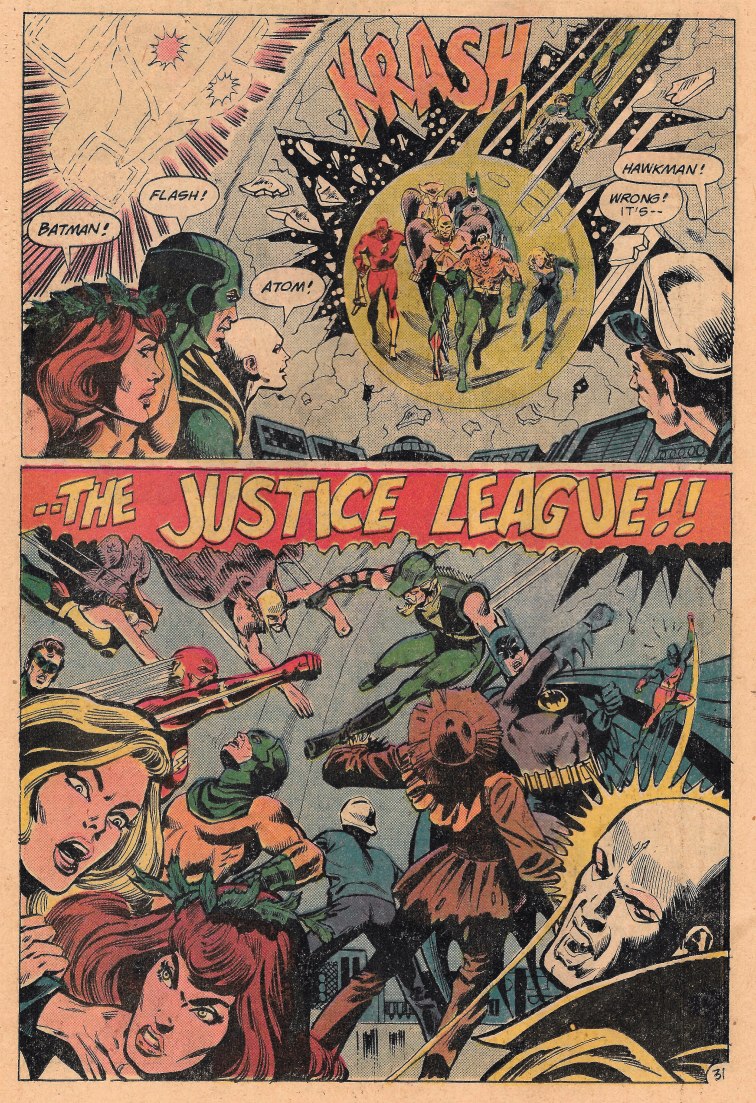 You'd think these guys would get sucked out into space and die…but nope! And the League has them on the run until Scarecrow uses his fear gas. Luckily Flash reflects it back on the Injustice Gang. 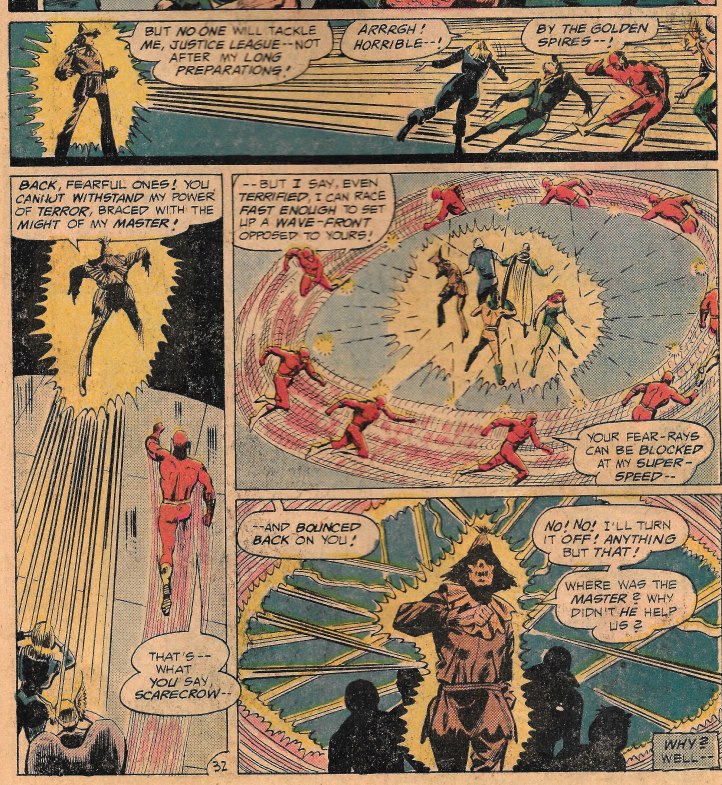 And Construct II can't handle the fears of its mind controlled minions bounced back at it, so it blows up. Or something. 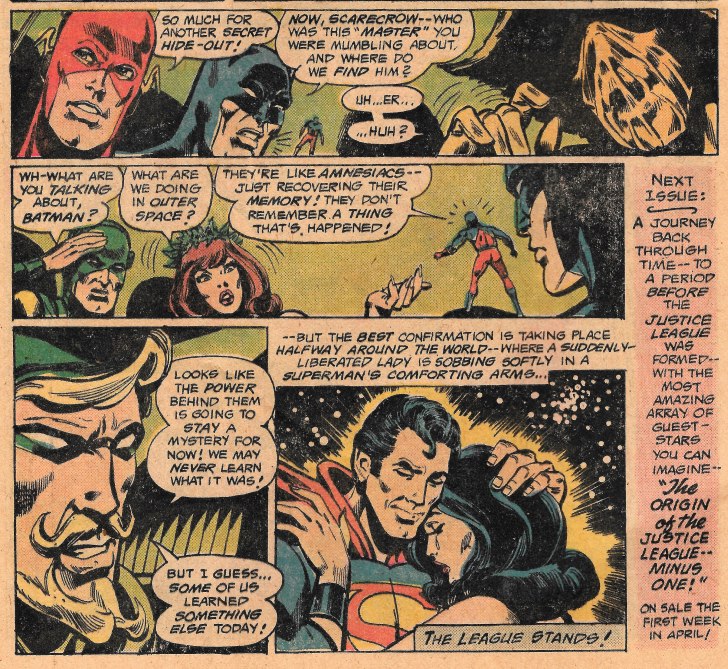 Oh and Superman and Wonder Woman make up, in the most chauvinistic way possible.

So the Julius Schwartz cover fooled me into thinking this would be great. Sadly this was horrid, with odd dialogue, tonal shifts, illogic, poorly drawn panels, and most of all - unlikeable heroes. Even when they weren't mind controlled. AMAZING to me that this came out the same month as Wonder Woman #232. I guess with every gem you find, there has to be an equal number of rocks?

Let's hope not, for Wonder Woman's sake.
Posted by SonOfCthulhu at 10:43 AM