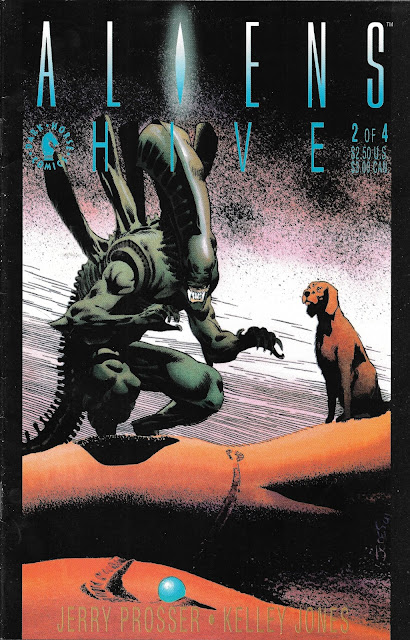 Hive gets inside the Alien's heads

I'm a big fan of Kelley Jones' style. So admission is out of the way, this is one of my Favorite crapbox Aliens finds. At least, as far as art goes.

But the story in this one, not helped by being the second issue in a four issue series, starts out a real mess and then works up to real excitement before slamming to a cliffhanger ending.

What I'm saying is that I want more of this story, stat.

Also that I'm really impressed with the storytelling Dark Horse did in the Aliens universe. I always assumed these standalone stories were more cash-grabs than anything else, but there is some deep storytelling going on in this one, with a genuine sci-fi premise as the story backdrop.

Prosser throws out the idea of using a synthetic Alien to rob the hive. Now that the Dark Horse Aliens universe has found something valuable about the critters (in part to prevent more militant factions from just nuking any and all Alien sites from orbit. Yah know, to be sure and all.), we now have novel approaches to getting their precious Alien honey.

But this tale starts off a bit rocky with us being thrown on to a ship next to a blown out vessel with no idea what is going on and no last issue text to explain it to us. 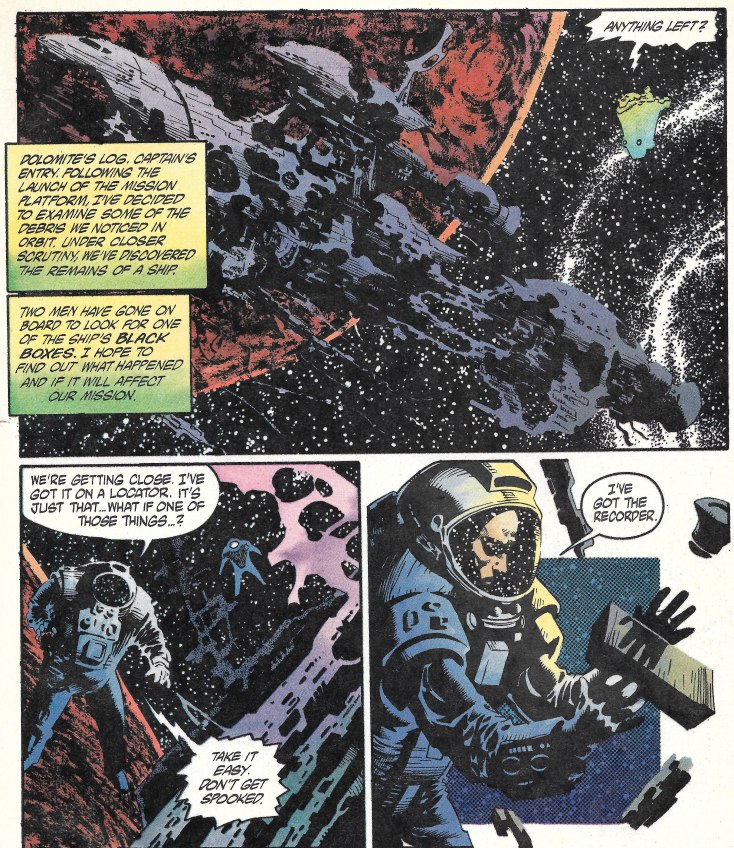 Just who is this space walking? Why? Where are we? Why are we here? What is going ON?

I'm going to give it to you as best I can piece together from OTHER sources of info on this one. We are on a ship owned by one sexy thief named Julie. It is parked alongside a derelict space hulk that their companion ship is retrieving the black box recording from.

Two of our crew are Max, the dog who has been brought along as bait… 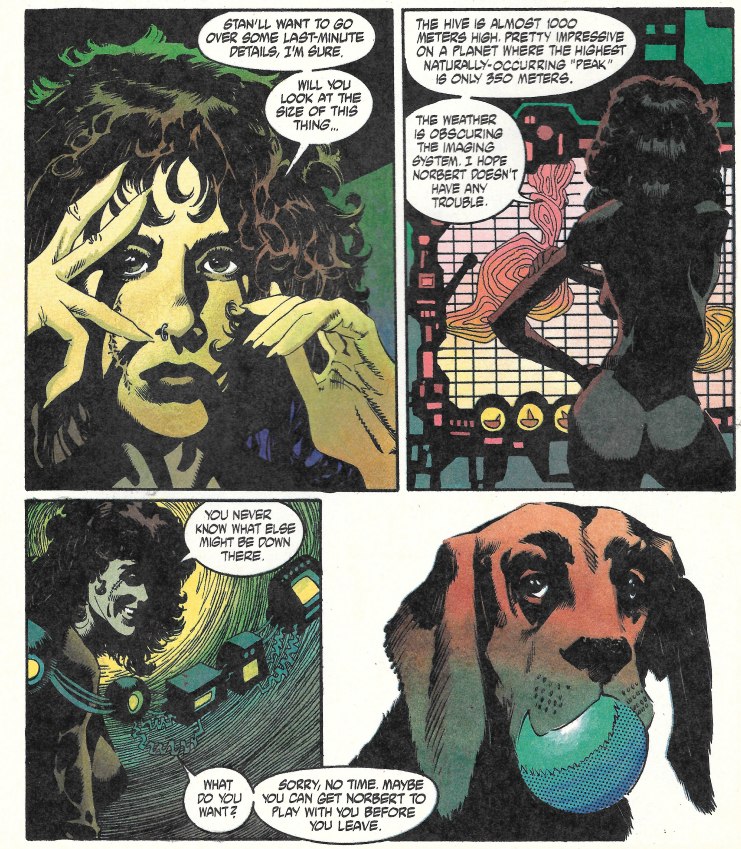 …Gil, the android or synthetic person, brought along for protection; 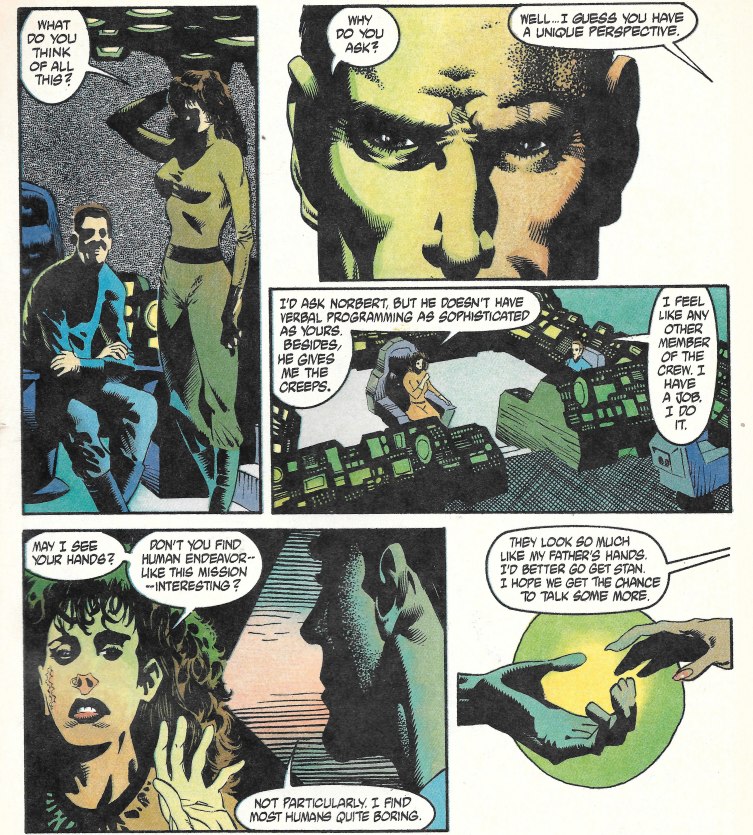 We are sitting in an area of space in a skiff from our main ship. A little dicey since this place is known for ship destroying electrical storms (don't ask, just go with it) and one other type of danger. 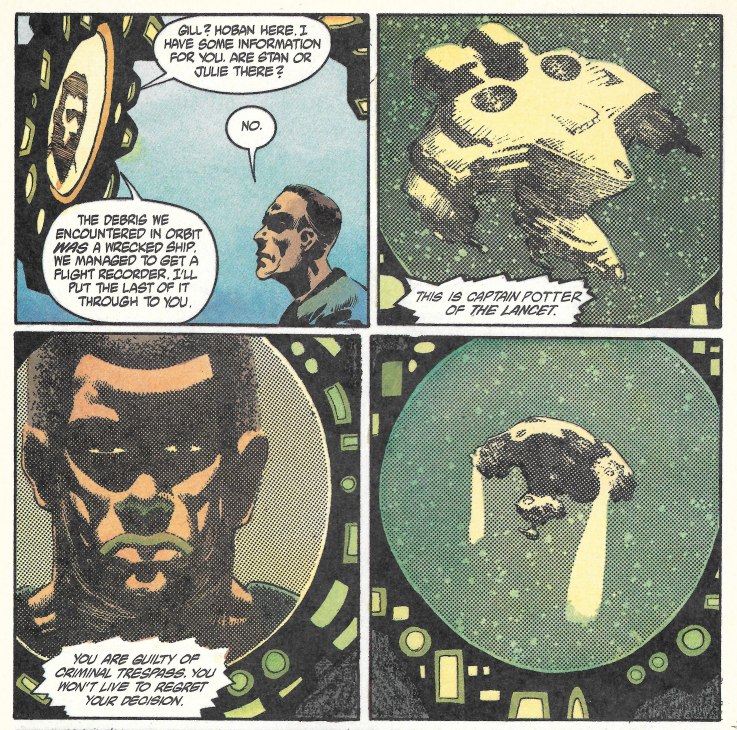 This part of space is owned by the Grant Corporation and is highly policed. I think The Lancet torpedoed that now-derelict spaceship resulting in its destruction

The other members of the ship are Stanislaw Mayakovsky, a research scientist with specialties in animal behavior and synthetic design. His latest experiment is code named "Norbert" and it is a synthetic Alien drone. The idea Julie and Stan have concocted is to have the unreal Alien walk into the Hive and make off with all of the royal jelly, which by this time is the most valuable commodity in the known universe. It also appears Julie loves Stan, as odd as that may seem. 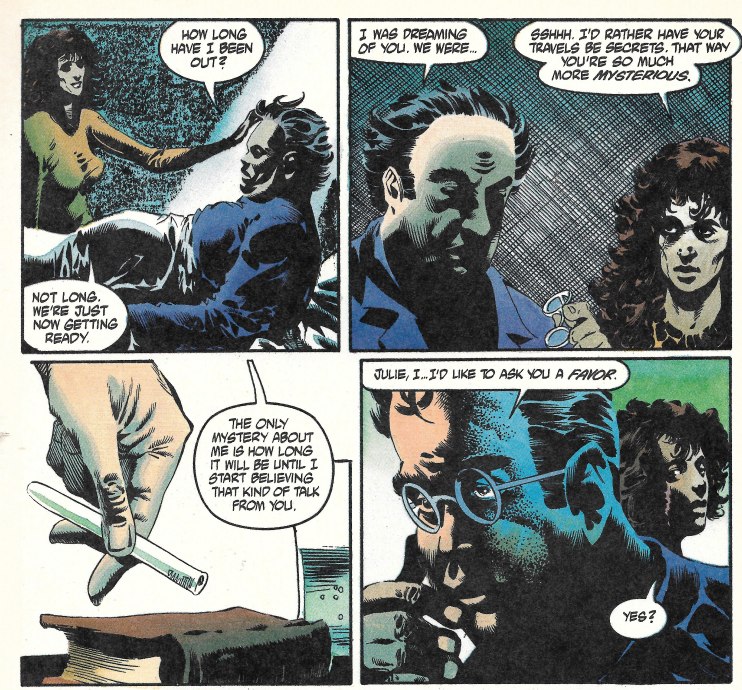 Pretty smart plan, I'll give them that. And interesting use of a synthetic, making something that can fool an Alien. Let's see if it works?

Last issue was setup for all of this, so this issue is all payoff. We start with Norbert and Max dropping onto the Alien infested planet. 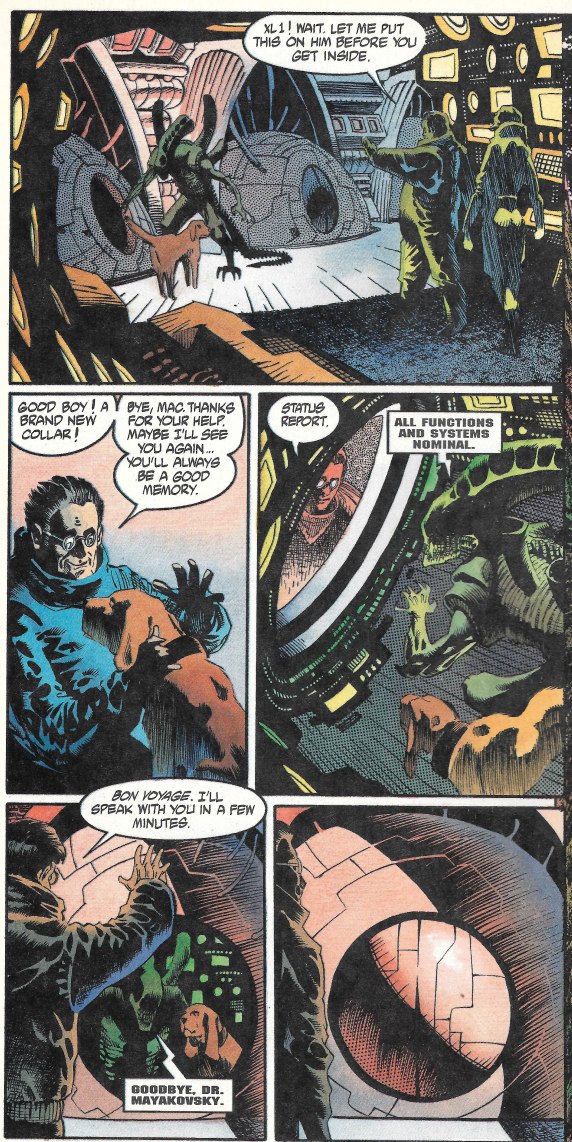 Once there they encounter an odd occurrence: all the Aliens seem to be asleep 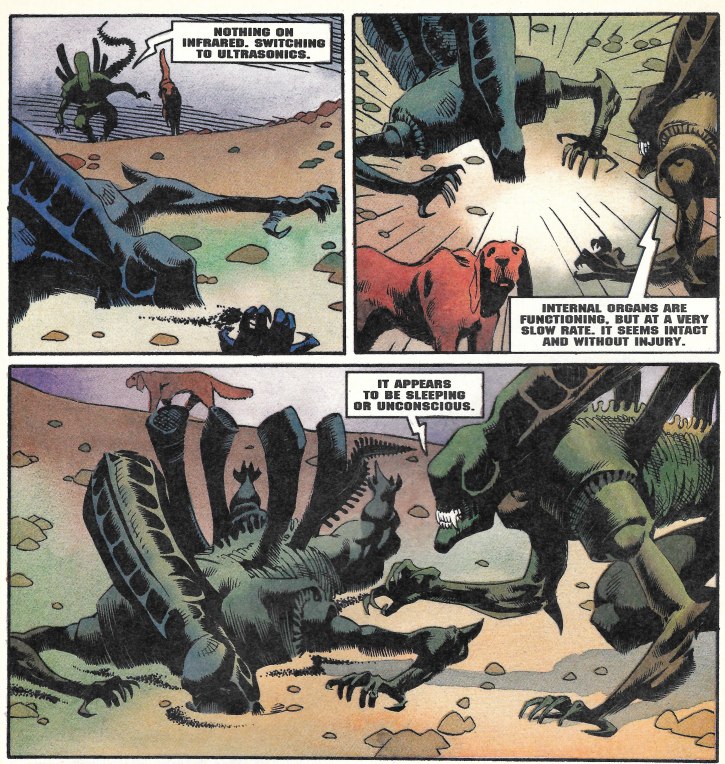 And Max notices something else: 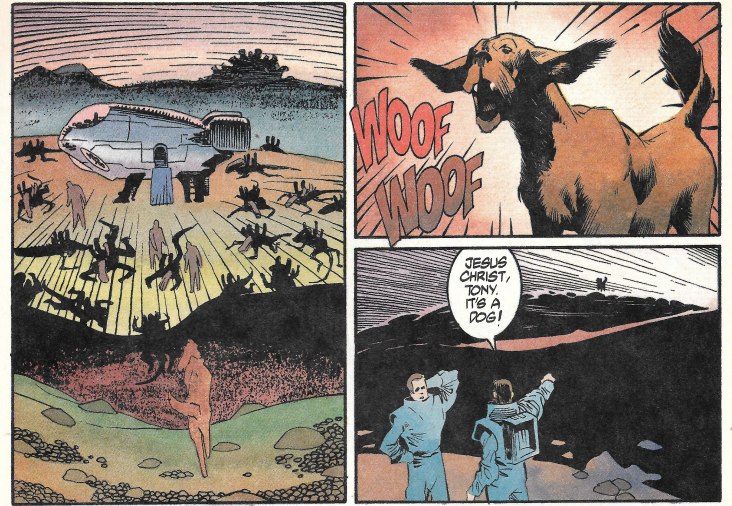 The Lancet's pod and its three person crew appear to be out tooling around on the surface, carefree as you please among all those sleeping Aliens.

They also seem a bit surprised to see Norbert out moving about and attempt to make him, well…dead. 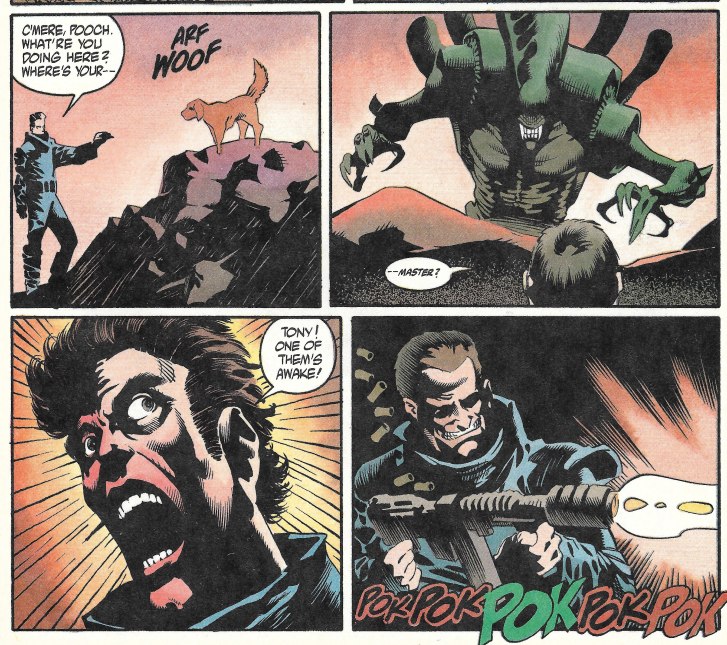 Norbet makes short work of him, like any Alien would EVEN THOUGH he's not an Alien, but a synthetic person. Not that it makes any difference to Tony. 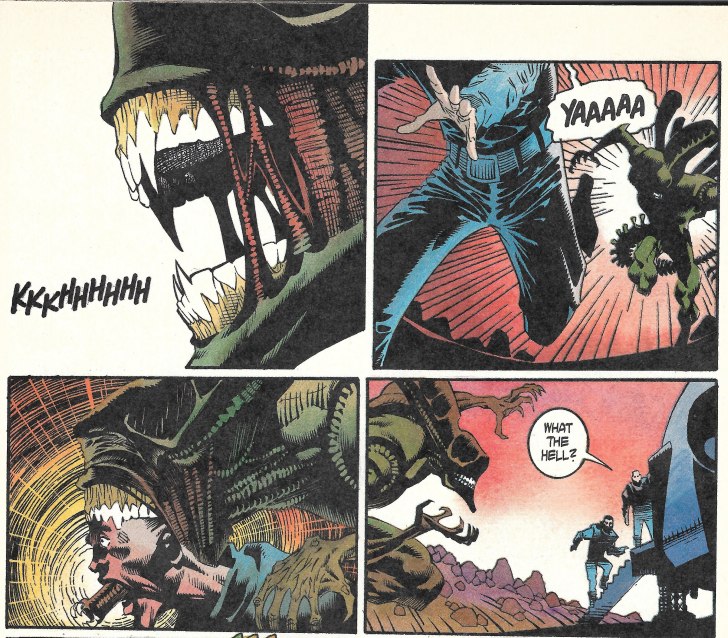 The other two run back in their ship and shut the door. 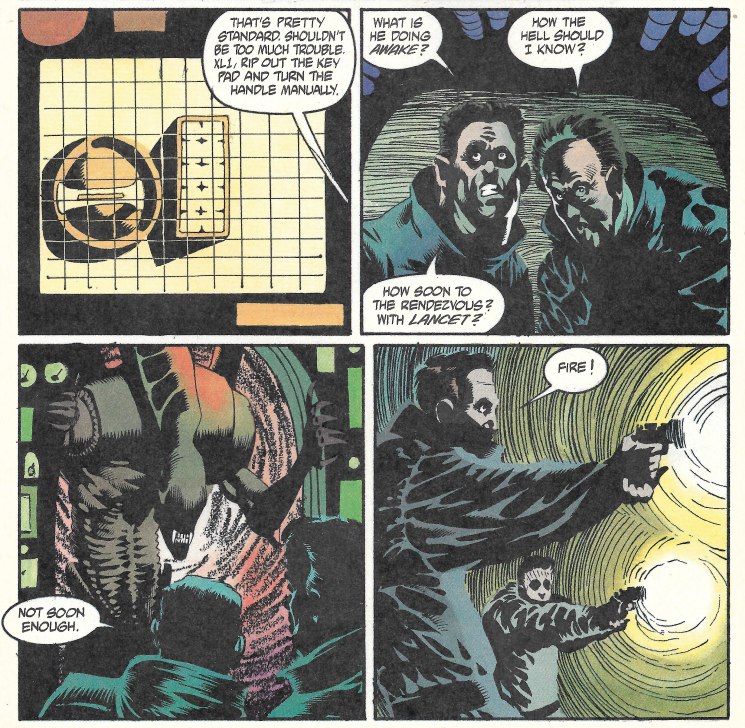 After both crewmen bite it, Stan has Norbert inspect the inside of the craft (after cleaning the blood off his video inputs) and we discover this handy piece of equipment. 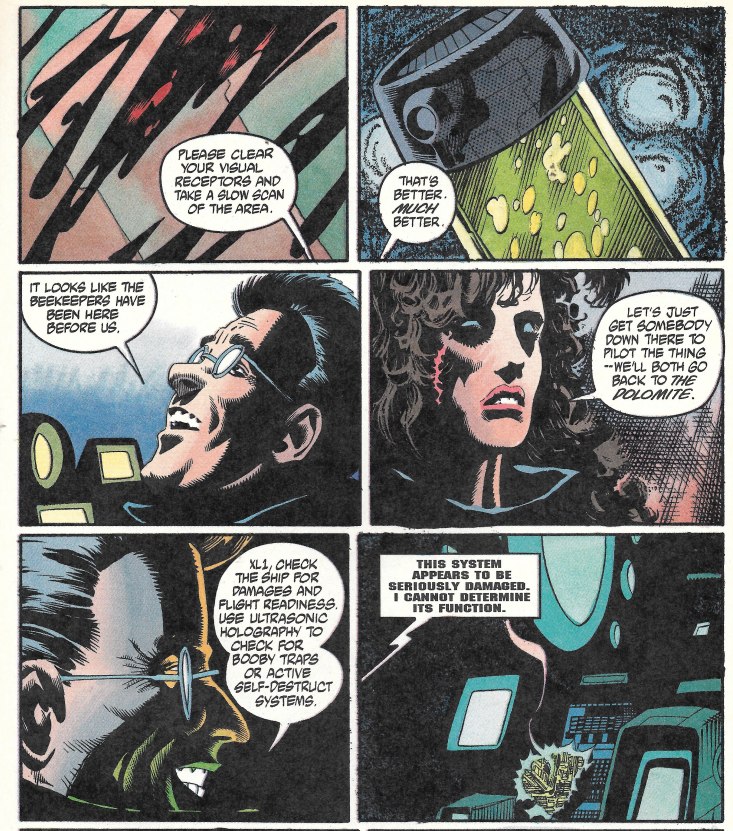 Which appears to put all the Aliens in a nice coma. That would come in handy. Mass produce those things, ASAP, and while you are at it, turn this one back on. Oh, wait. You destroyed it.
Stan has Norbert check outside and sure enough all the Aliens are waking up. Which means they have to use their original plan, which is quite upsetting to those of us who love dogs. The original plan is this: 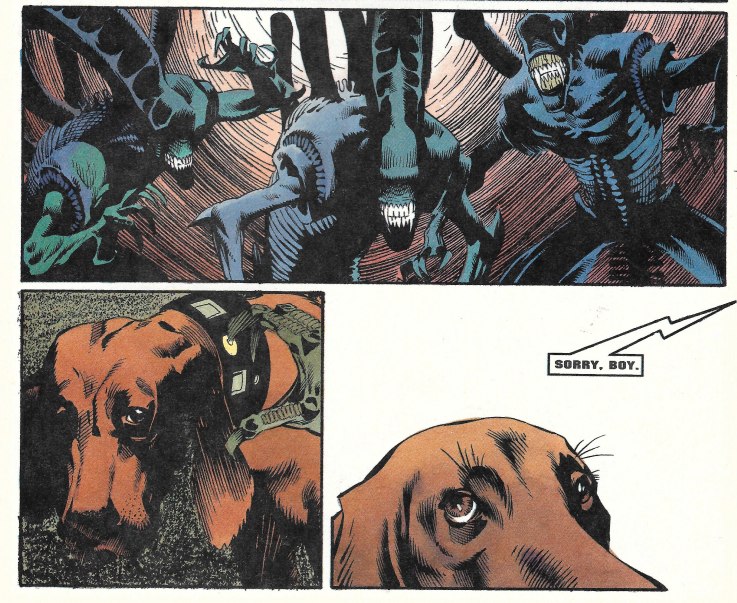 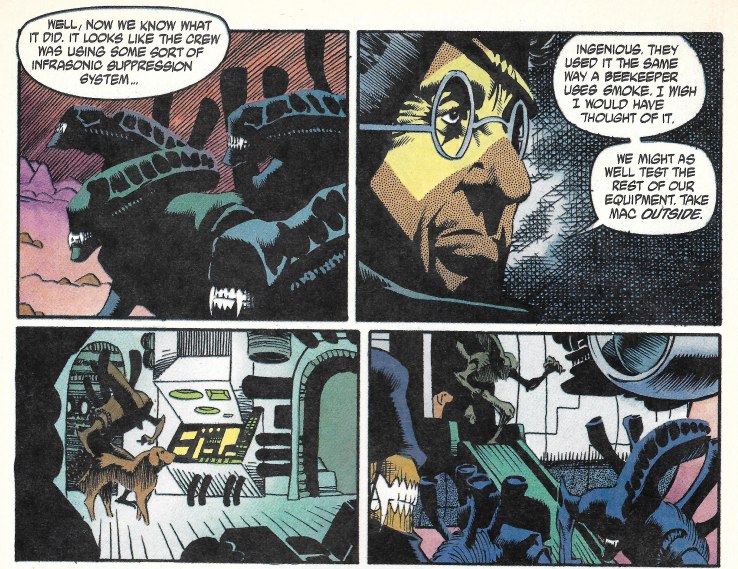 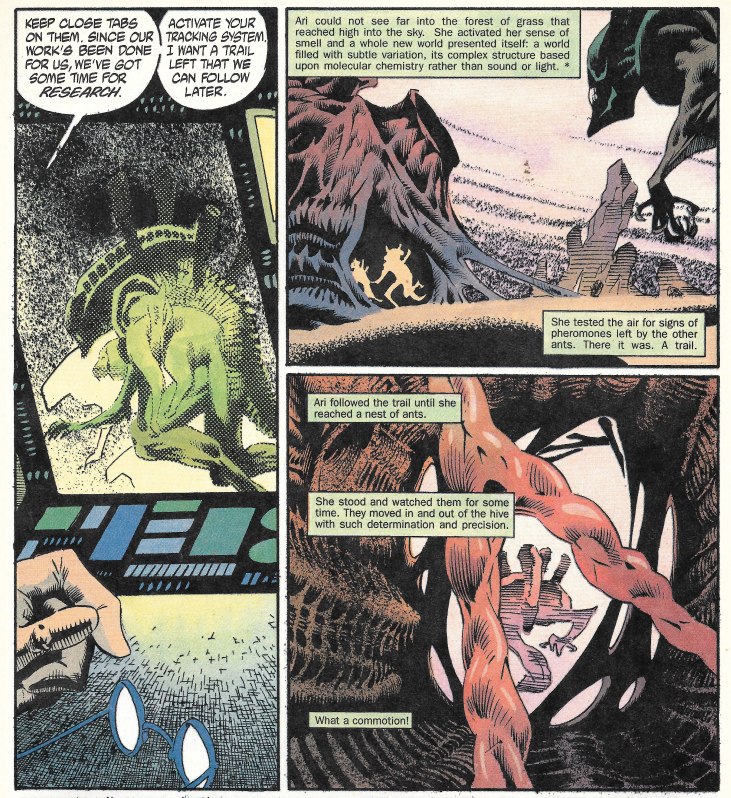 …Which will ultimately lead them to the egg chamber, since the Aliens will be taking Max to be implanted by a facehugger. (Notice how meek the dog is because it grew up around Norbert. So freaking sad.) 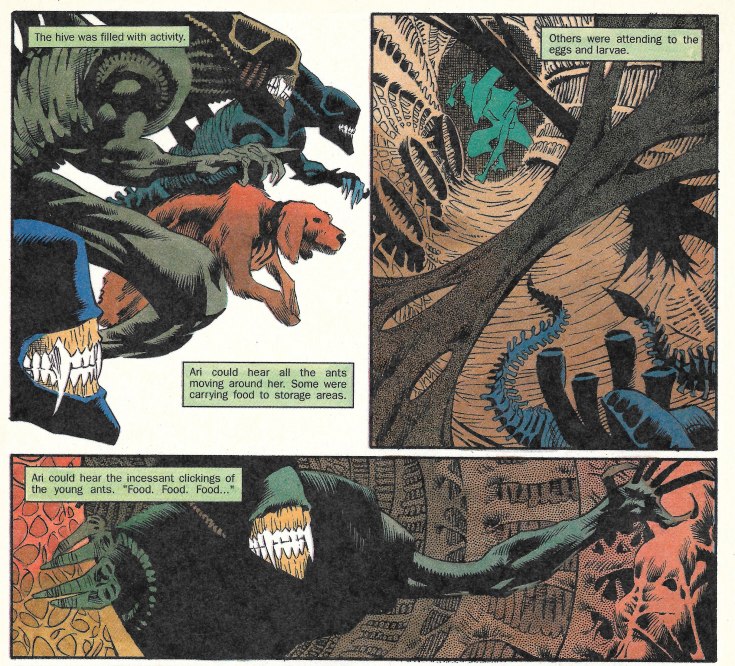 And of course the egg chamber will lead them to the queen and her stash of royal jelly. 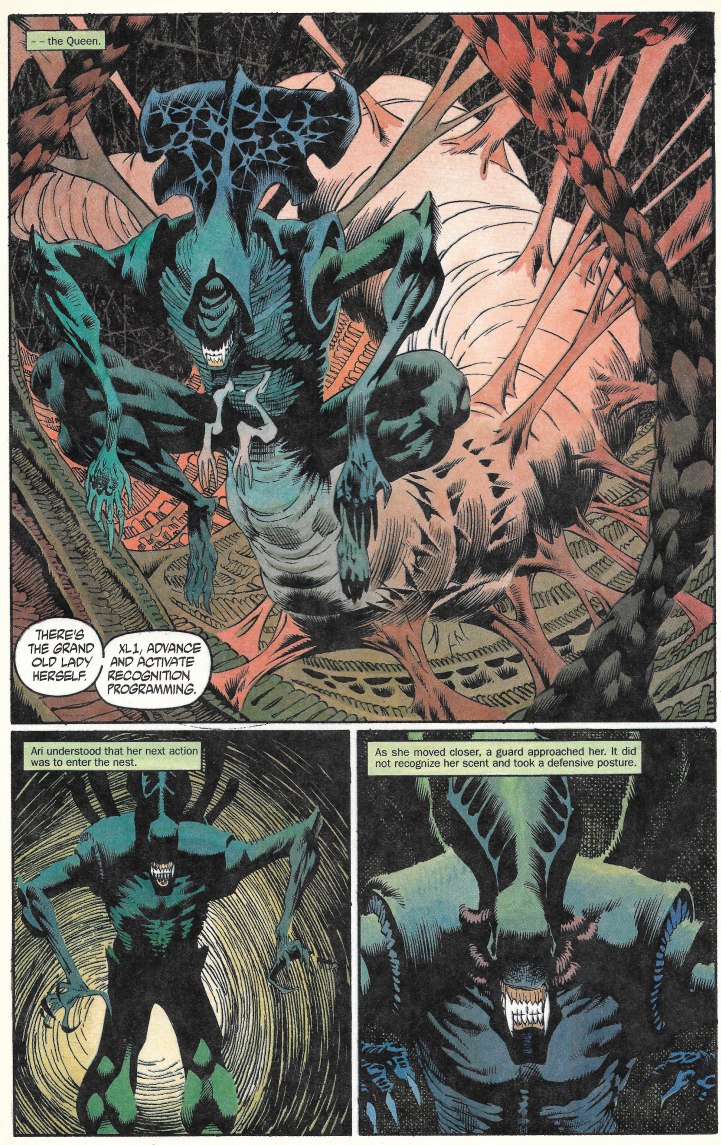 Except the queen has a royal guard force and Norbert has to pass a pheromone test to be "accepted" as one of the hive. 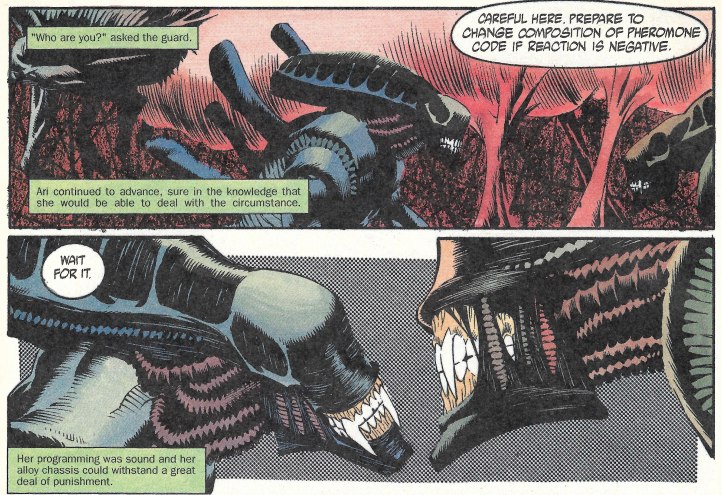 A test he unfortunately fails. 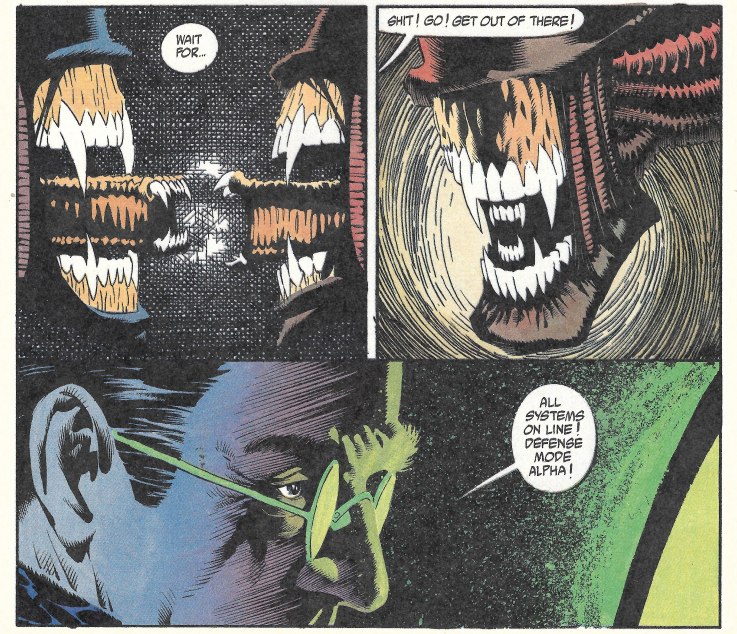 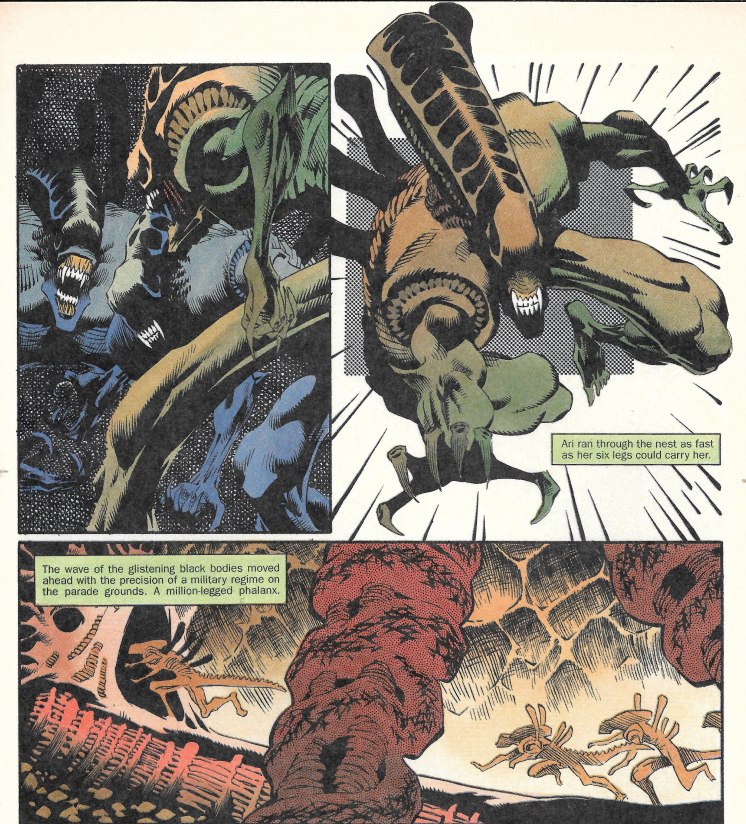 …and ends up torn to pieces in one of the hive's dead ends. 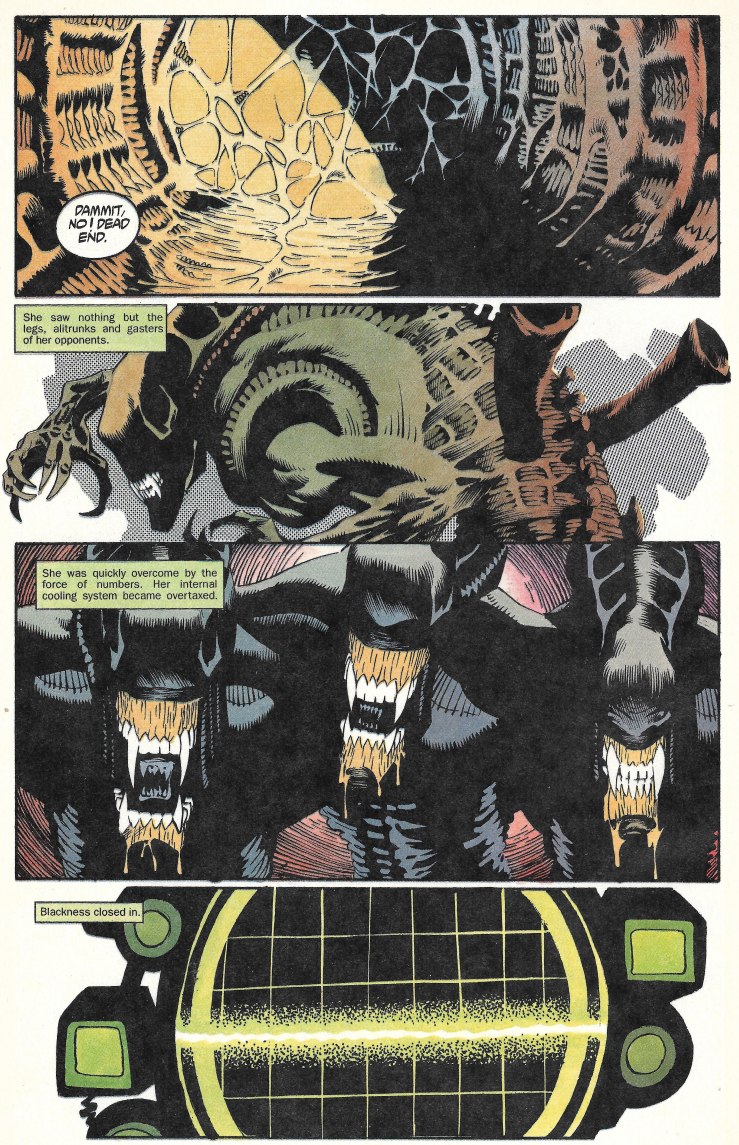 To say Stan is disappointed is an understatement. He and his crew have troubles of their own. A storm has rolled in…a space storm (remember: go with it). The other ship informs them and they explain about the drop ship from the Lancet with the full cargo hold. 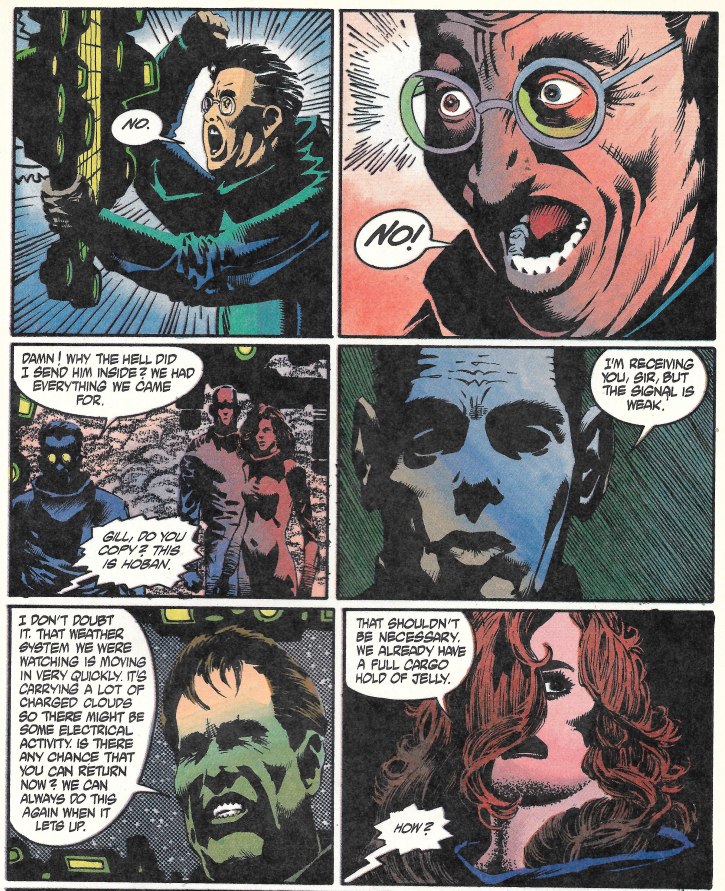 That storm isn't messing around however. 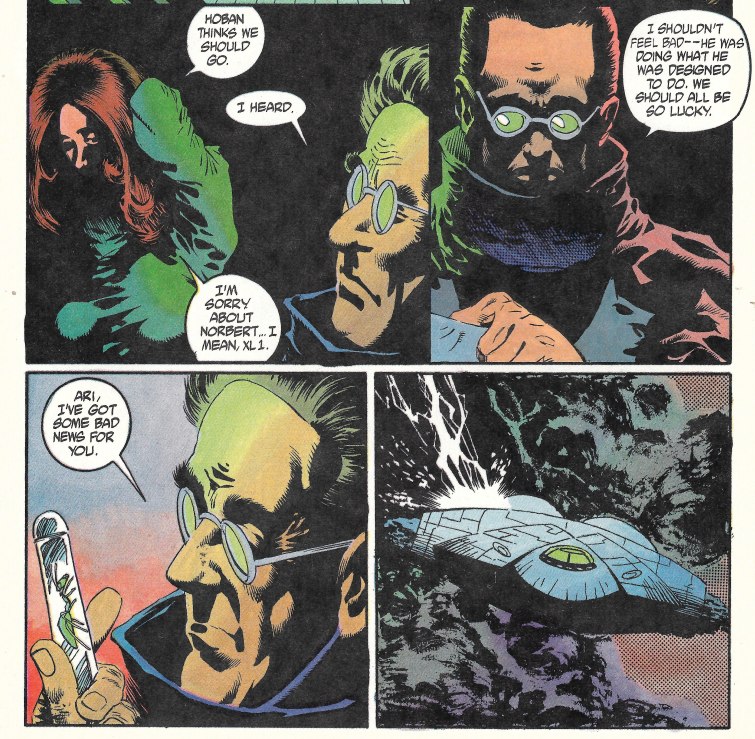 And it damages their craft so badly they have to abandon ship for the planet infested with Aliens below and await rescue. 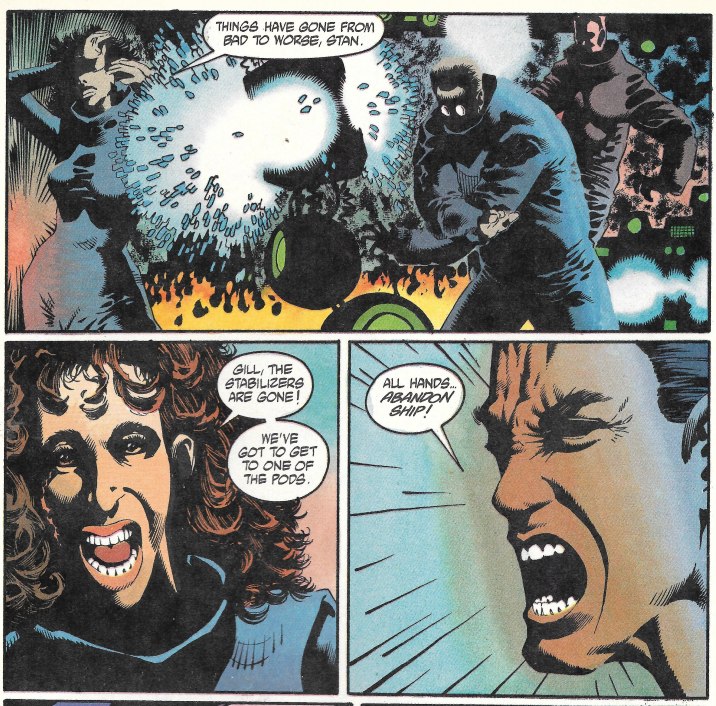 With only Gil to protect them, too. 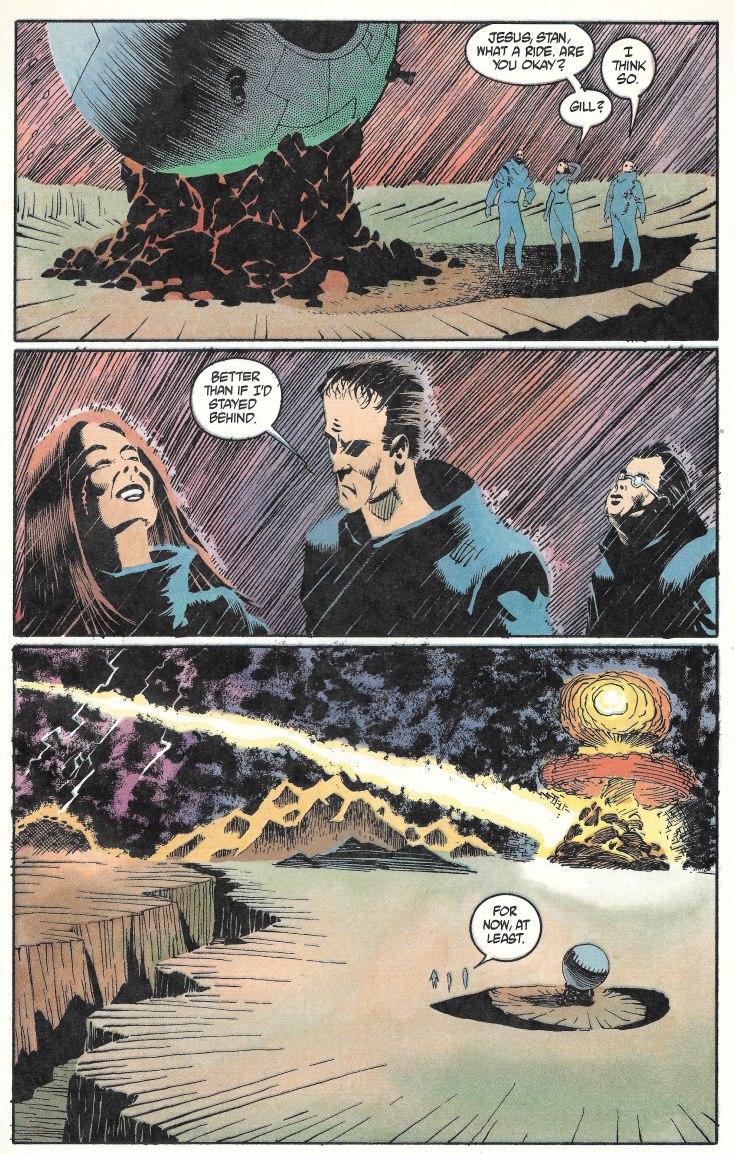 So what do I make of all this? The art is amazing. The variation in styles between each of the Aliens series is refreshing and intriguing. I love Kelley's dark panels and facial close-ups. He has a marvelous grasp of panel design that while it isn't the same as Norwood's storyboard effect, still evokes dramatic action in an understandable fashion.

The story idea here is great and the synthetic Alien so good an idea that sources tell me it make appearances in other books later on down the line. However this particular story has a muddled beginning that doesn't really work until we touchdown on the Alien planet. I also don't buy the love affair between bookish, overweight Stan and the sexy Julie. Would not surprise me if she was also a synthetic by story's end.

All in all though, it is a great addition to the franchise and something I'll check discount bins to find out how it wraps up.

Posted by SonOfCthulhu at 2:51 AM