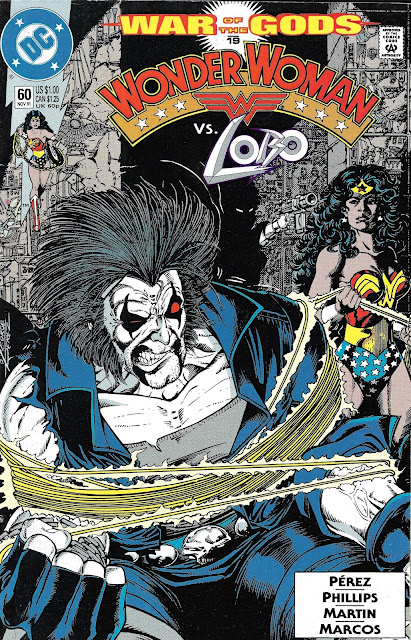 What is all this "vs" crap?

Back we go into the midst of a DC crossover, albeit this time one that George Perez was writing.

War of the Gods kicked off late in 1991 with a four issue miniseries and crossovers galore. The plot, a convoluted and expanding thing, dealt with the sorceress and Wonder Woman villain Circe seeking to appease her goddess of choice Hecate. What does Hecate want? Why just the destruction of the Earth Goddess Gaea, which would mean the end of all life on the planet Earth as well.

That's no easy thing, so Circe screwed up the balance between the Gods using a spell called the Hellfire Web. Gods of every ancient culture awoke, with most feeling the Hellfire Web's influence causing them to attempt to destroy the Earth.

Worst of these awakenings occurred when the Roman Gods came to and made war against their Greek counterparts, the Greeks being the protectors of Themyscira and the Amazons. If you remember your history, the Romans preceded the Greek civilization and many of their Gods were less popular sequels of their Grecian counterparts. In this instance, Zeus(Greek) fought Jupiter(Roman), Mercury(Roman) fought Hermes(Greek), and Mars(Roman) fought Ares(Greek).

It sounds like neat stuff, but the throwdowns took place over four issues and were VERY difficult to follow given that nearly every DC superhero was involved. It was LOTS of plotlines. I have two issues of War of the Gods. They are almost incomprehensibly dense.

Luckily we just have to deal with Wonder Woman and her cast of characters. First off Circe has also tricked the world using Phobos, the Greek god of fear, into believing the Amazons are someone to be mistrusted if not outright eradicated. General Philipus is injured and taken captive and Wonder Woman's mother Hippolyta has gone missing. Wonder Woman herself is in hiding while trying to unravel the mystery of these artifacts that could bring back the Gods, yet appear to be untouched at present. 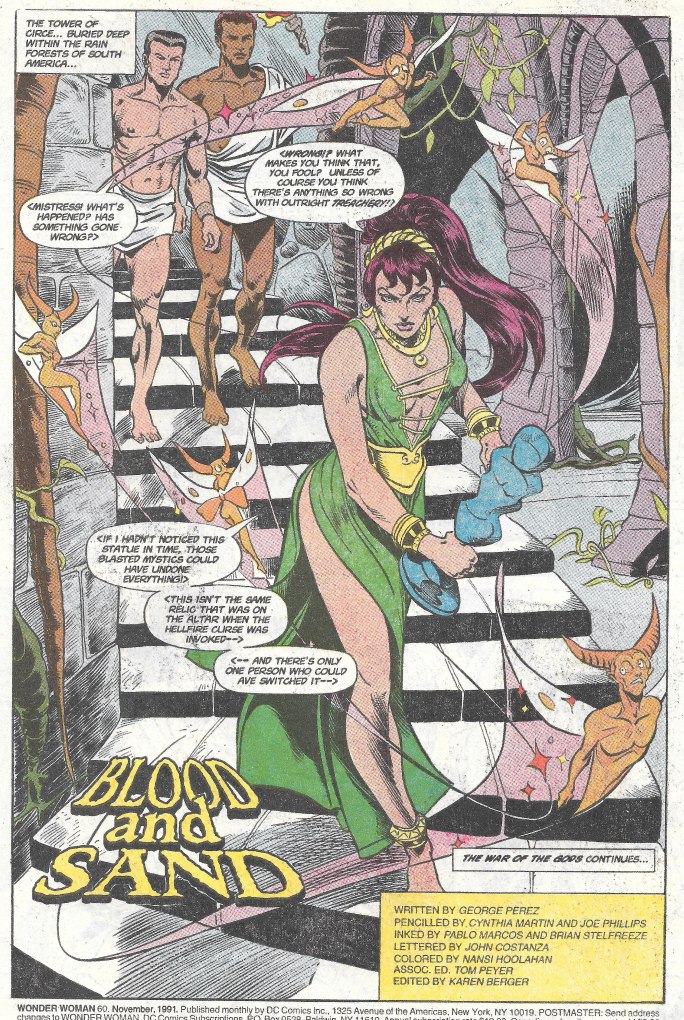 We begin with Circe yelling and killing her subordinates, these rogue Beastiamorphs, who I believe are probably one syllable away from an Anamorphs lawsuit. Appears she has a spy in her ranks, someone capable of messing with one of the artifacts she was using in her Hellfire Web spell.

More bad news awaits her as an injured Beastiamorph breaks in with news that her Amazon prisoners have escaped. Circe isn't one to allow for mistakes like this to go unpunished. 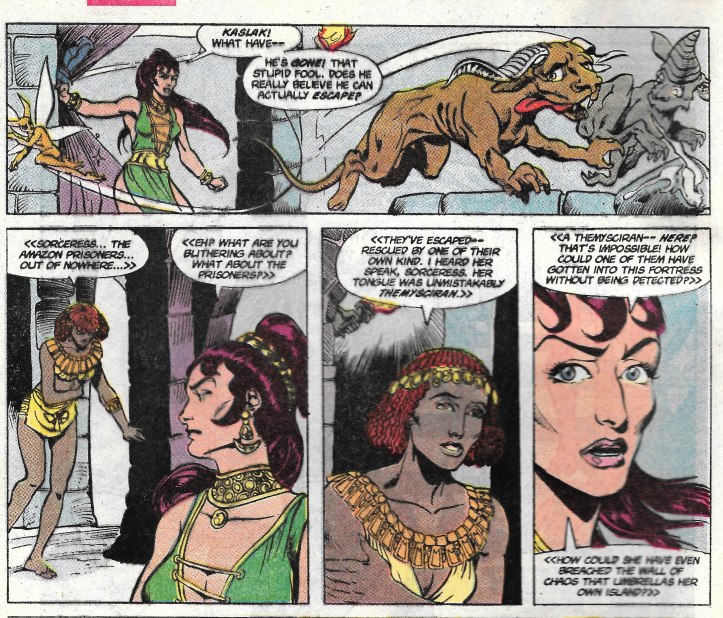 And the news goes from bad to worse as she learns Julia Kapateus escaped, who I believe is a good friend of Wonder Woman with ties to the Amazons and their Gods. We'll go over some of that when I hit Wonder Woman's first Annual. Also it appears Dr. Psycho might be on the island and he is working against her. PLUS all her minions appear to be VERY stupid. 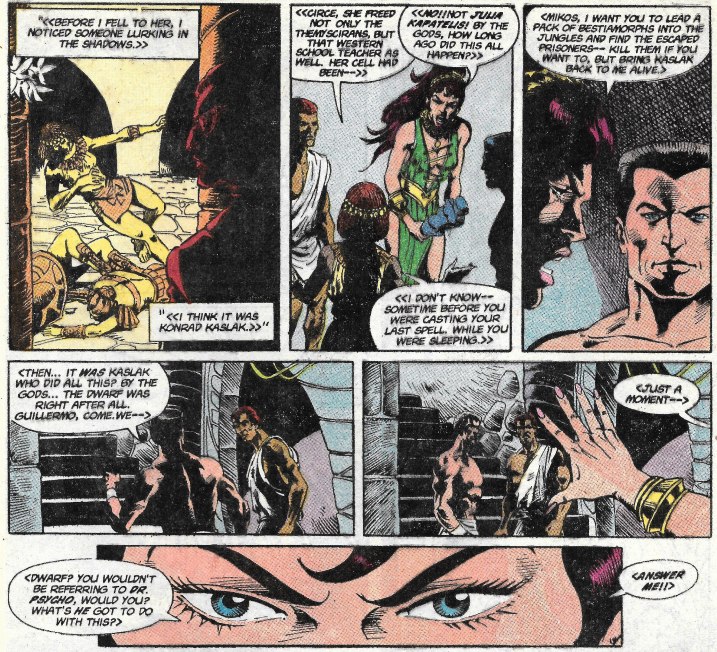 You can bet Circe isn't going to very forgiving. 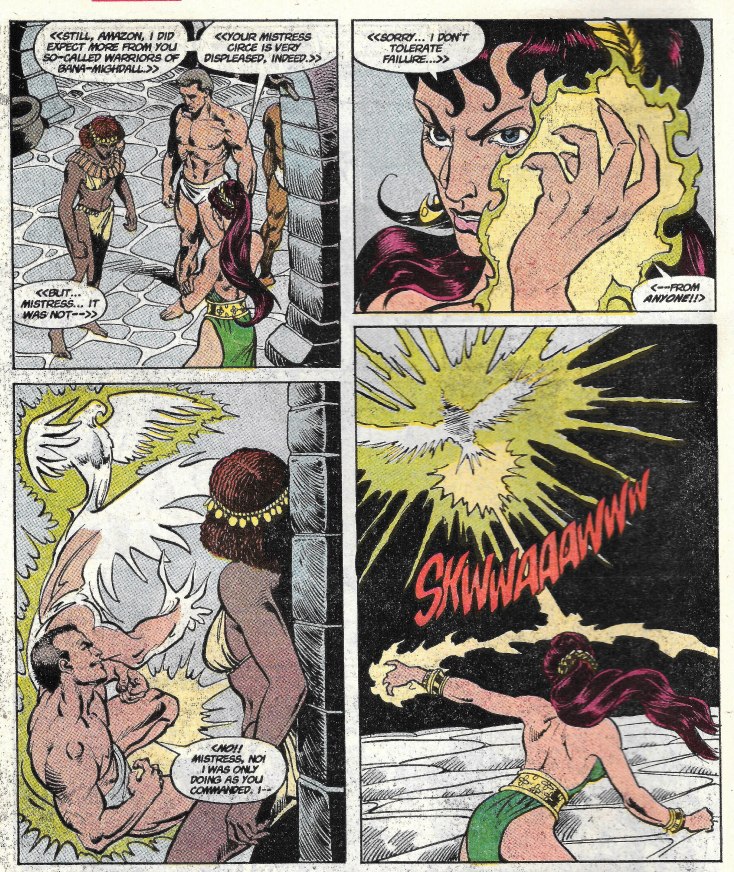 Meanwhile, on the rooftops of Gotham City, Batman is meeting with Wonder Woman. Except Hawkwoman shows up instead. 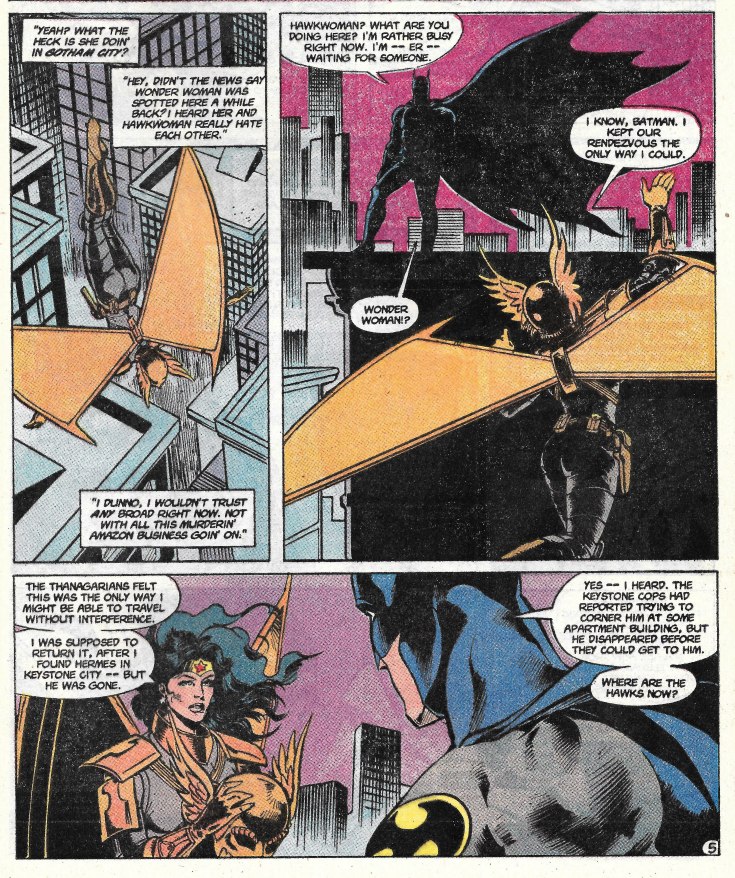 Nicely done. With this one action we see that Diana and all Amazons are being hunted. Public sentiment has turned completely against her and her fellow Amazons. We also learn Hermes has disappeared. Hermes was one of the Gods who was actively helping Diana.

Getting on with the reason for this meeting, Batman updates Wonder Woman on a powerful relic she suspected had been altered. What Batman tells her is so much worse. It has been stolen and replaced with a duplicate. 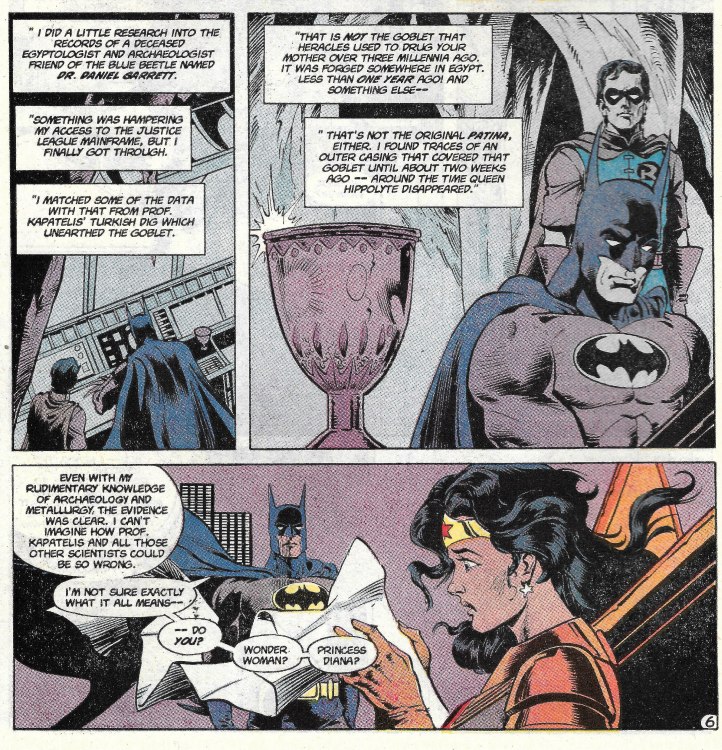 Meanwhile, shadowy government figures offer vague threats to Wonder Woman's friend Phyllis Haller. They even show off that they have a captured and drugged Philippus, who is the Amazon Captain of the Guard. 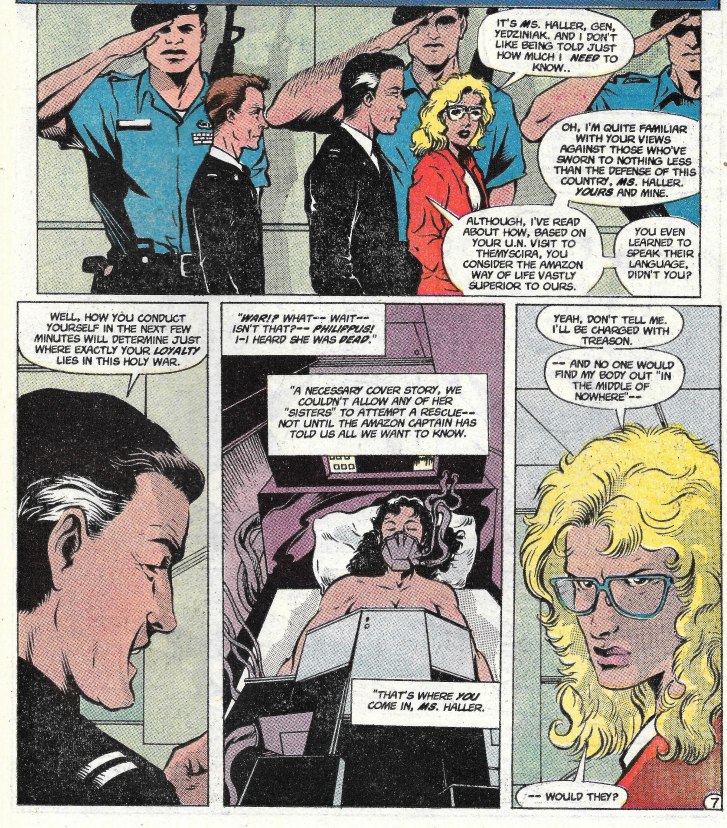 Their vague threats are pretty sinister sounding, but not as sinister as what Steve Trevor and Etta Candy hear is going on. 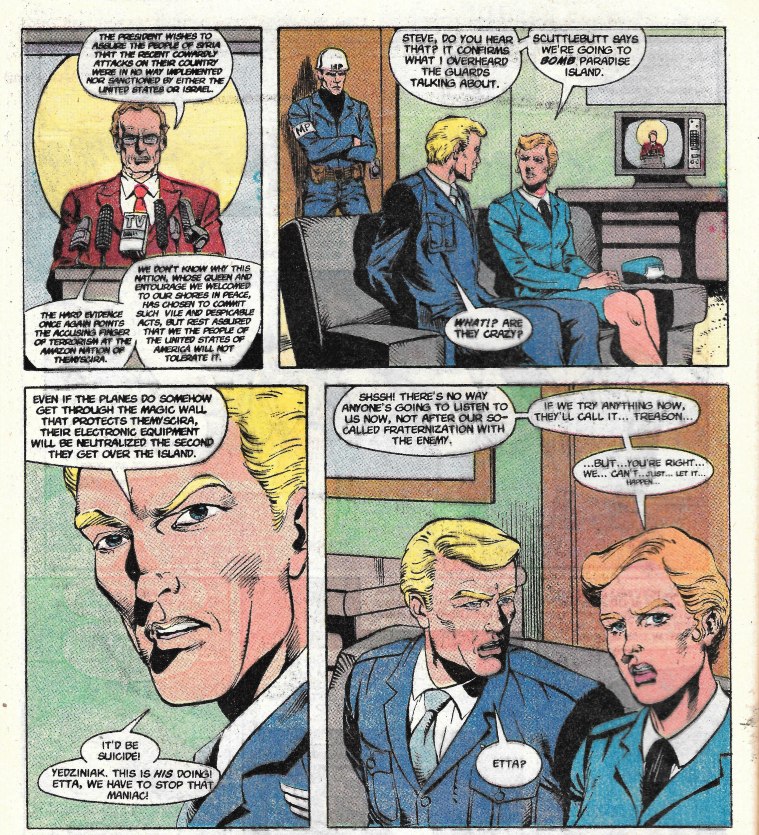 Yeah, so the USA is going to bomb Themyscira, which would spell an end to the Amazons. And as Steve points out, perhaps an end to the pilots flying the mission as well. Paradise Island is known as a place where modern technology doesn't appear to work so well.

Meanwhile Wonder-Pal Officer Indelicato has run into Dr. Minerva A/K/A The Cheetah. Instead of having to fight for his life, she demands to see Wonder Woman. In fact she even appears to be working on the side of good at the moment. 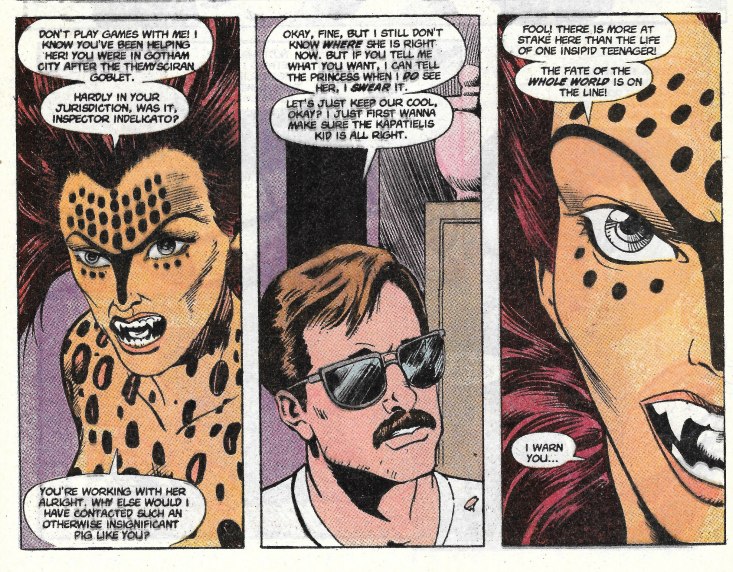 We move on to Circe's escaped captives who are being lead off the island by a three Amazons. 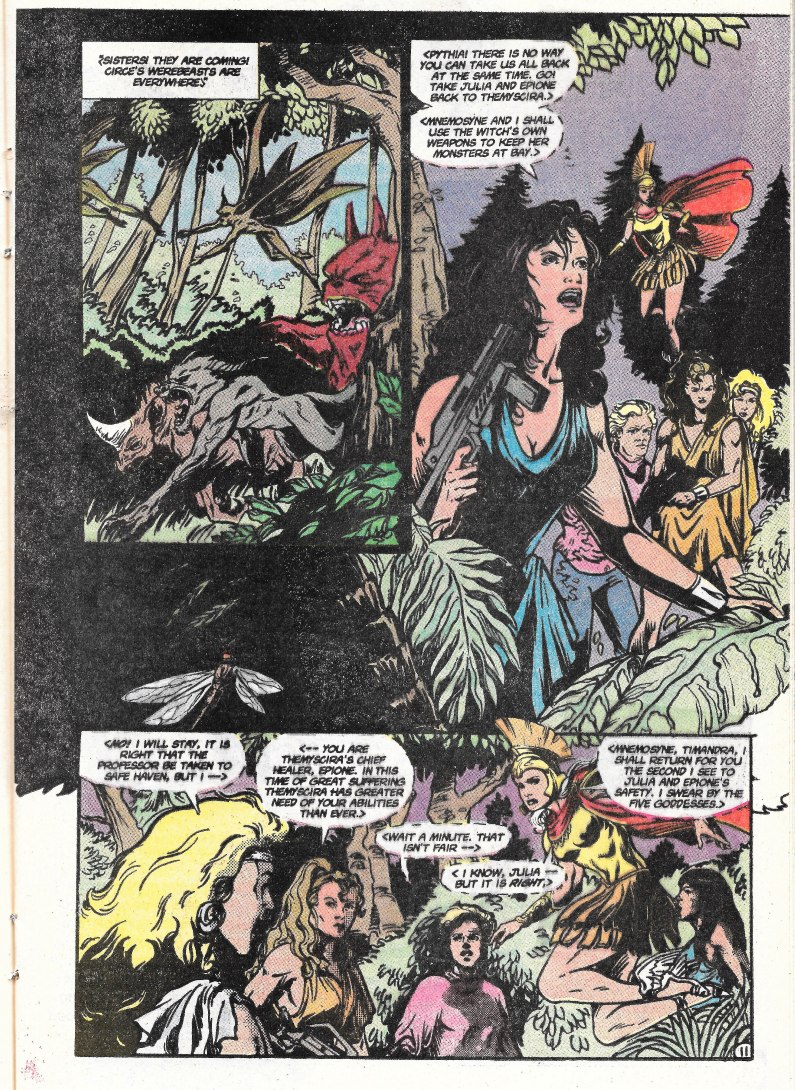 They arrive at a plan to get the humans off the island, even if it isn't accepted with good graces by everyone. With the two armed Amazons staying behind covering their escape, the pair are transported to safety. 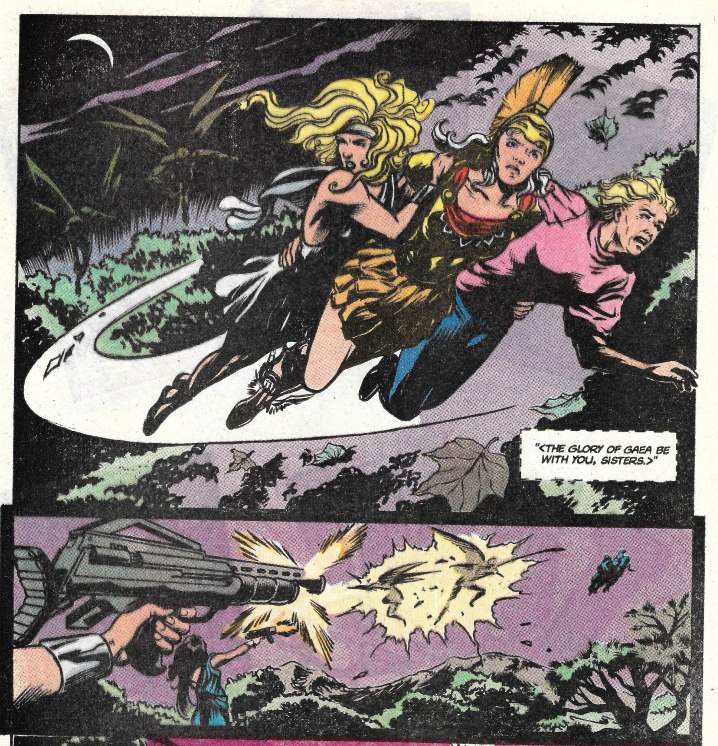 With all of Wondy's friends fates now updated, the tale can finish by focusing on Diana's search for the origin of the false goblet.

I wanted to point out after those last panels that YES, I see how bad the art gets in some of these panels. These issues were Perez's swan song from the title and at the time he was writing and drawing the four issue War of the Gods mini as well. He did this crossover because it was Diana's fiftieth birthday and he felt that DC wasn't capitalizing on it nor giving the character her due.

This was his send off and, it appears he overbooked himself. Those War of the Gods issues had 56 pages written, penciled and possibly inked by Perez (at least most of numbers 2 and 3 bear the mark of his hand) and they came out alongside these Wonder Woman issues. That's a ton of paper with a HUGE storyline to keep on top of. Perez wanted this to be the cap on his run of the book. Unfortunately that came with sacrificing doing the art in these issues of Wonder Woman, much to my dismay. You can readily see the quality in the art, just isn't the same in some panels, even if it appears Perez assisted with the page layouts to any degree.

Let's finish off our tale, however with Wonder Woman and that false cup. She uses her lasso of truth on it and it leads her to the Egyptian desert. 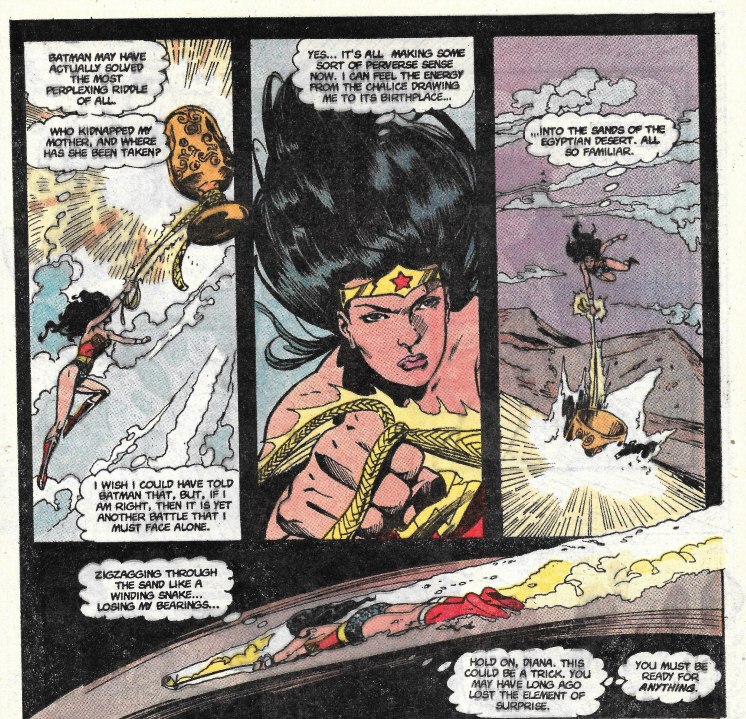 BENEATH the Egyptian desert, to be exact. She ends up in some kind of hidden temple below the sands. Just as she is getting her bearings, it becomes guest "star of the week" time. 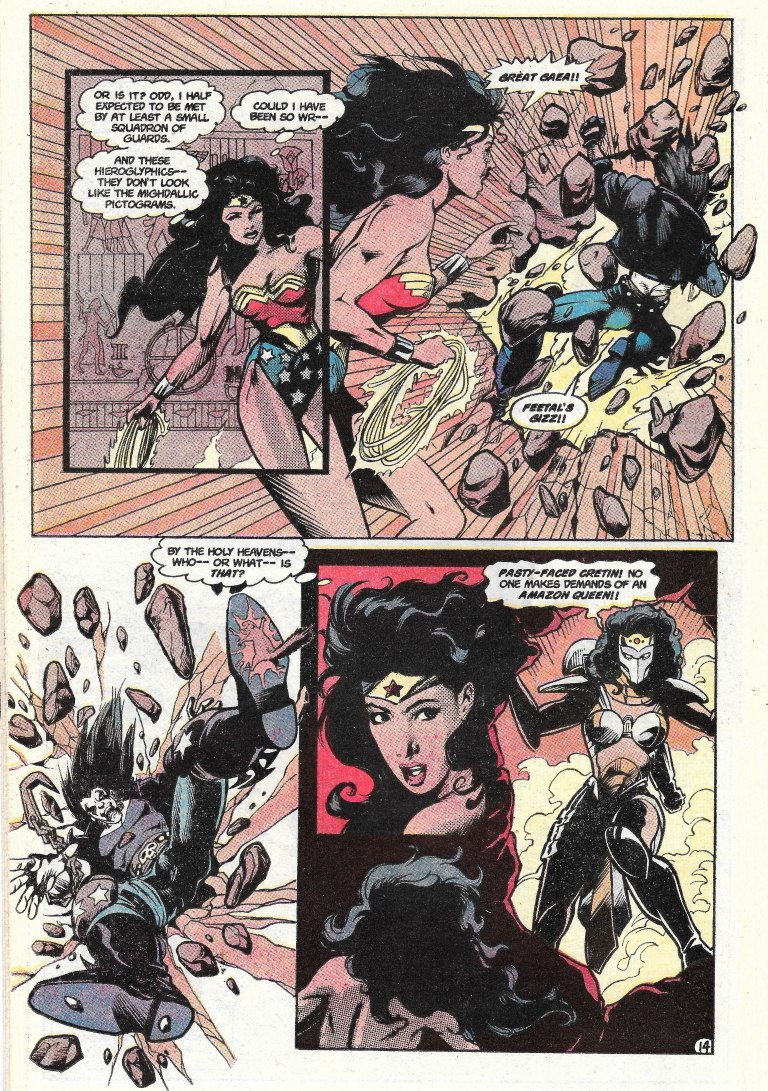 Enter Lobo, being thrown through the wall by an Amazon in battle armor and a metal mask. Diana wants answers and Lobo wants…well, Lobo just wants to beat someone down. That's kinda his thing. 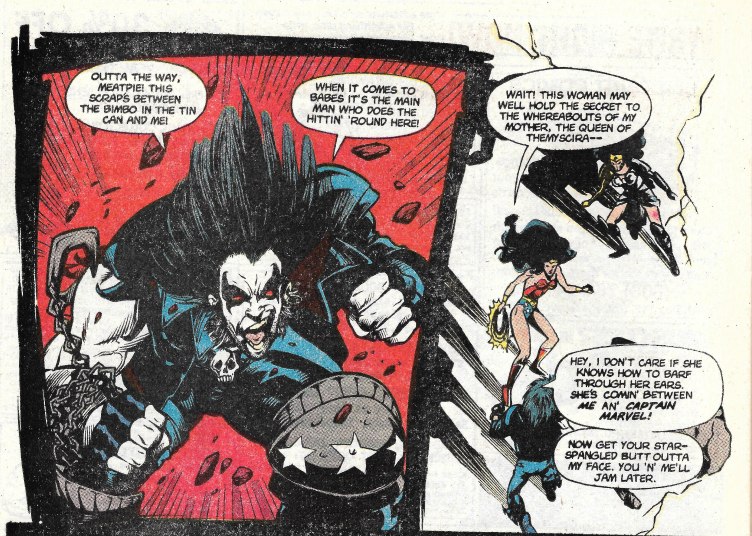 Not sure what beef Lobo has with Captain Marvel, but he appears driven to go through anyone or anything standing in his way. He brushes Wonder Woman aside with a slap and then boxes the armor wearing Amazon one. 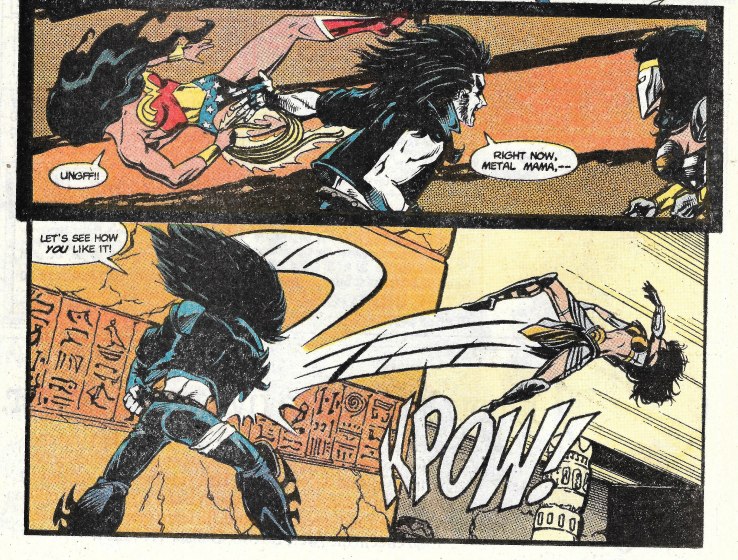 And here is the "battle" between Lobo and Wonder Woman. He hit her so she lassos him. 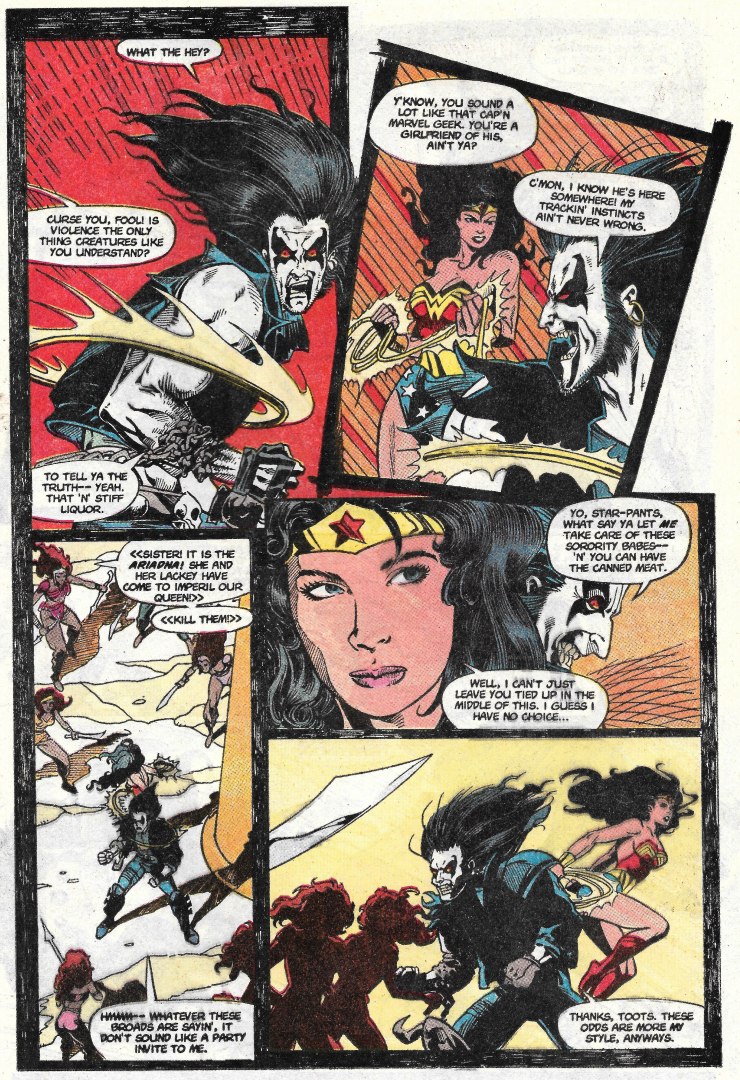 Now they both fight together against the additional Amazon warriors who spill out of the hole and their metal clad leader. I mean, that is just blatant false advertisement by the cover of this mag, right? 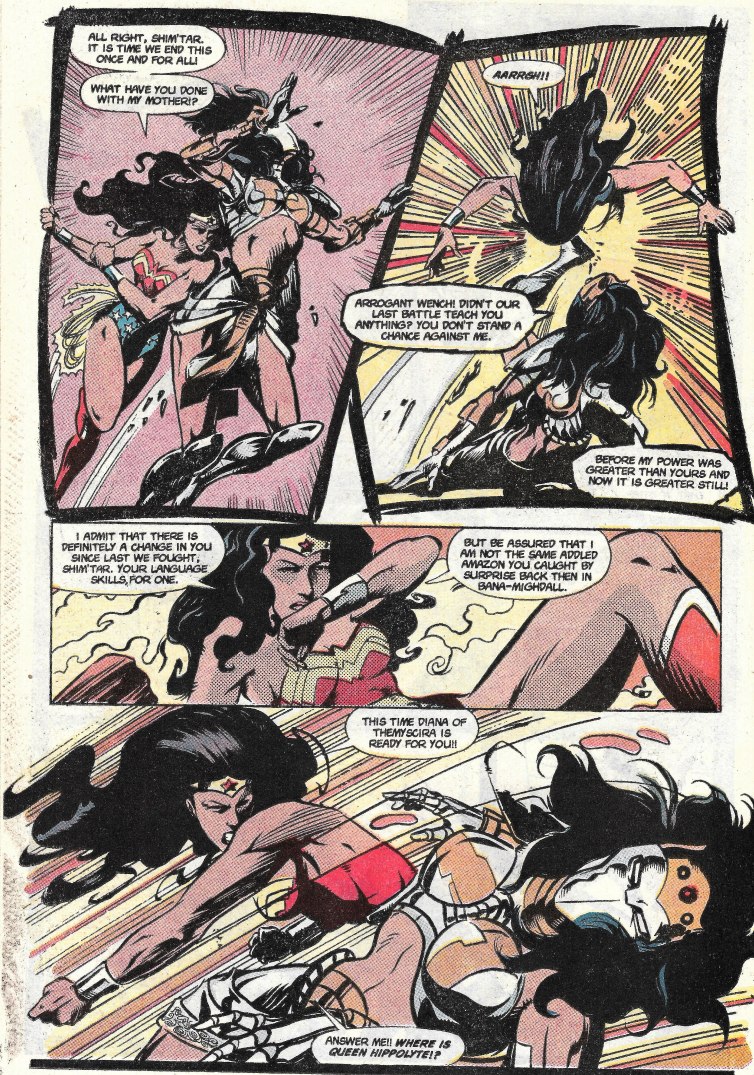 On pages that are NOT Perez, but definitely do work, Wonder Woman lays the smack down on her armored enemy, while… 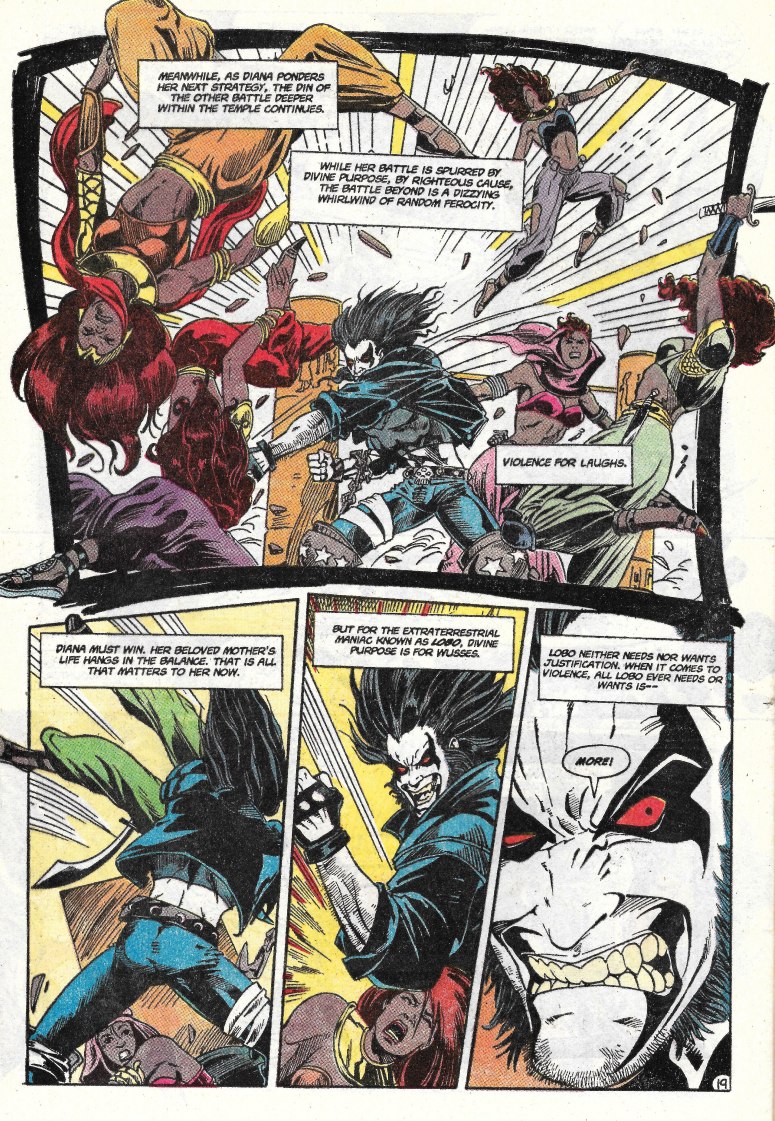 …Lobo is tackling an army on the other side of the room. Wonder Woman manages to slip the golden lasso around her enemy… 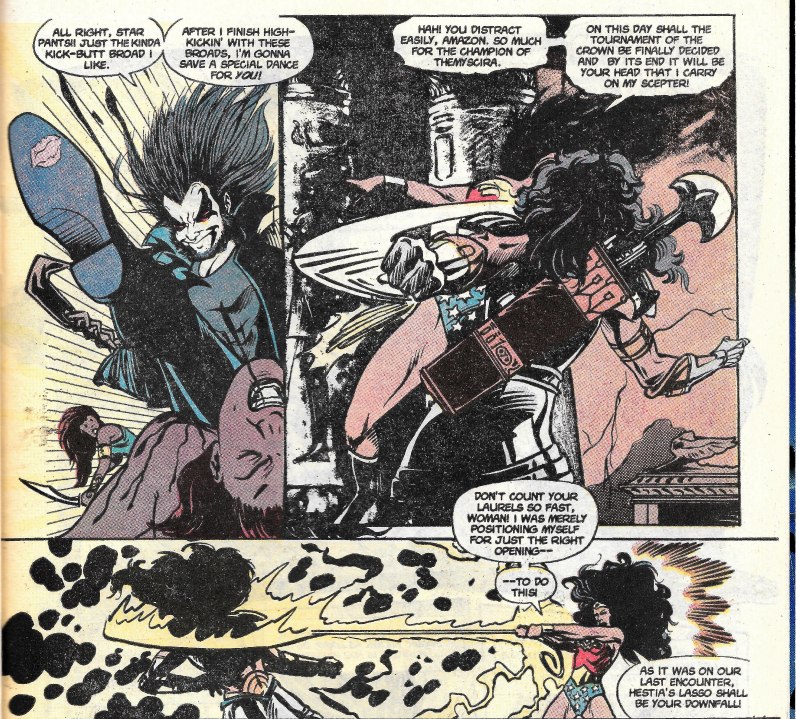 …which doesn't go quite as expected. Note that she believes this person to be an Egyptian queen, and given the location she found her that sounds likely. 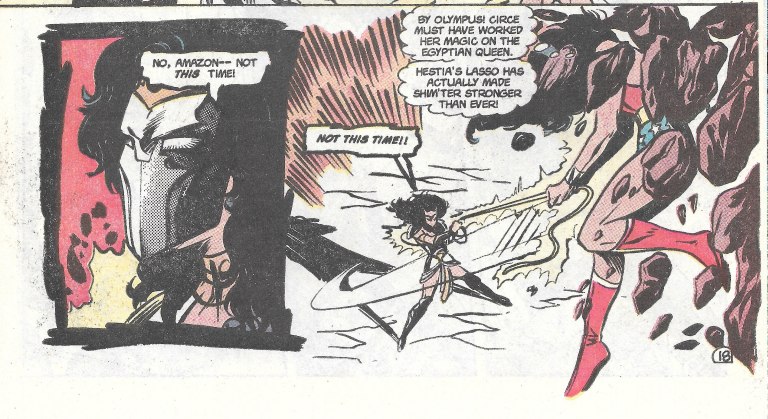 We get this amazing page of Lobo being the best he is at what he does, and what he does isn't very ni-…I'm sorry, but I've received a cease and desist from Wolverine's lawyers.

Great layout and pencils though. 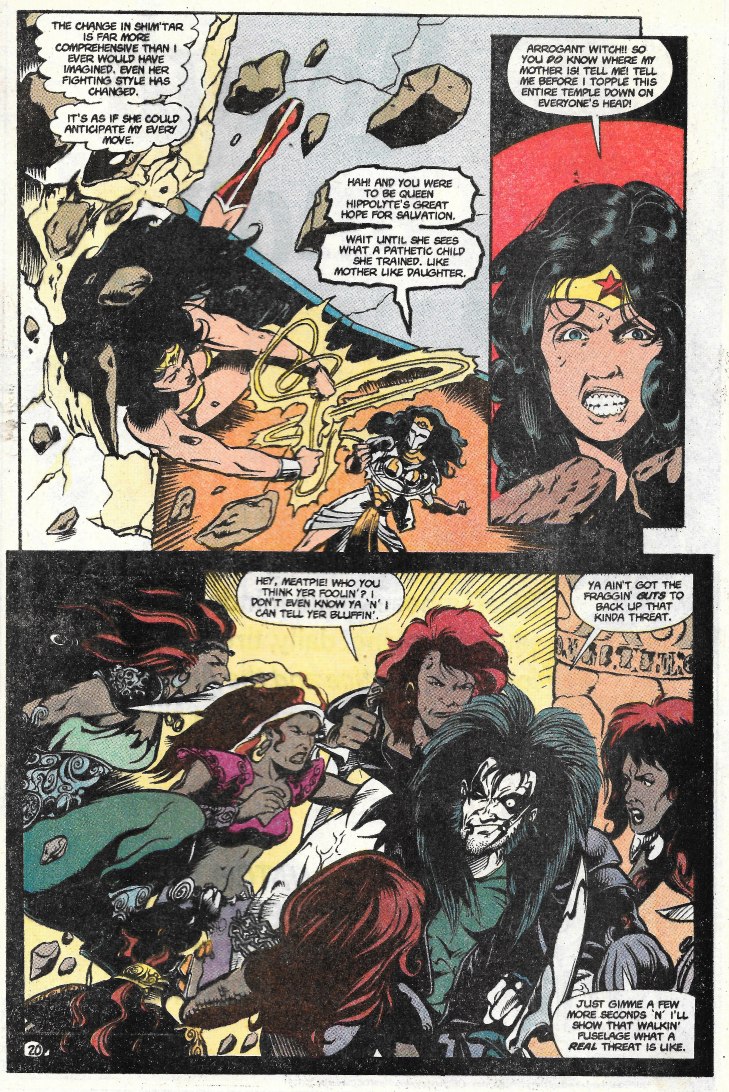 Just when things look good for one of them, suddenly the tide turns. Wonder Woman is still being tossed around by her own weapon and Lobo looks to have bitten off more than he bargained for.

Then something strange happens. The Egyptian queen pulls out an energy gun (hey, don't look at me!) and shoots Wonder Woman.

…who deflects the beam right back into her face using her bracelets. 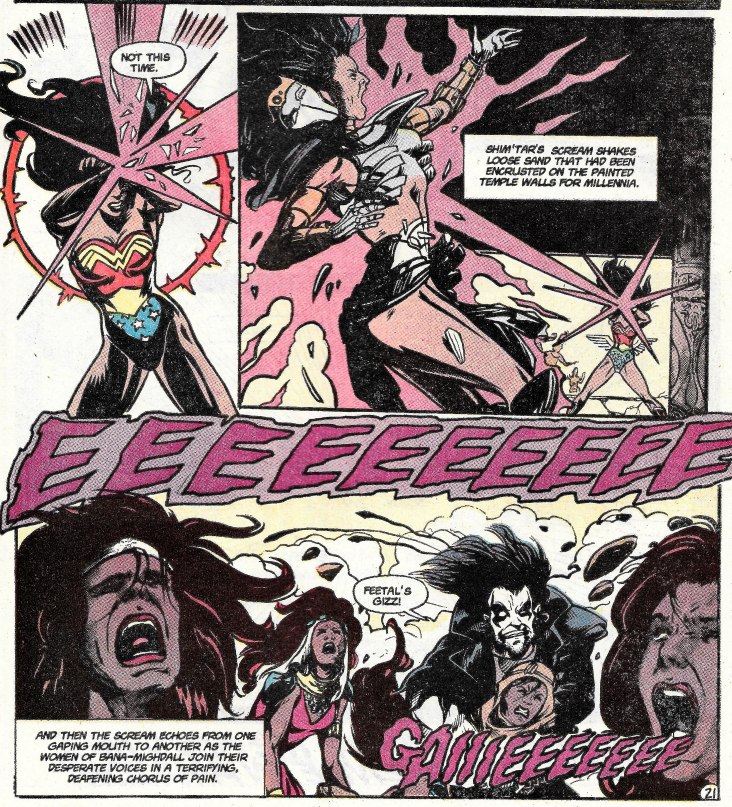 As the Egyptian queen falls over, ALL the women fighting Lobo crumple to the ground. The armor bursts off the queen to reveal that Wonder Woman has been fighting and now has critically wounded her own mother. 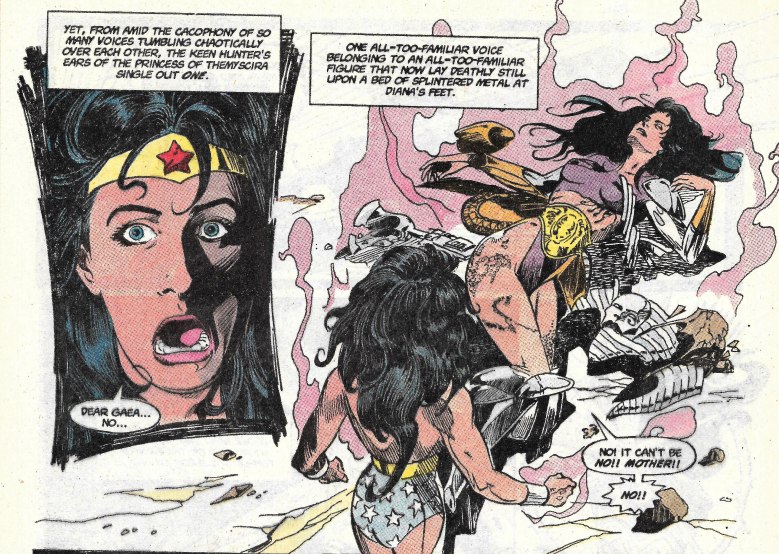 Not too shabby an issue. We spend more time on Wonder Woman and still catch up with the events affecting her surrounding characters. We have a great bad guy to face off against who is clearly a master chess player using Wonder Woman's loved ones as pawns against her. The guest star, while not living up to the cover's promise, still gets some good scenes in. The only drawback here is that it isn't Perez art and we are dealing with the fallout of a massive crossover that it appears DC didn't want to give more than four issues. Something that would have been better served with eight to ten.

Enjoyable, but not the best.

Perez ended his Wonder Woman run two issues later, as William Messner-Loebs took over. The ending of War of the Gods was supposed to finish off with Etta Candy marrying Steve Trevor, an event that Perez had been building to throughout his run. DC editorial stepped in and prevented Perez from completing it, leaving it for Messner-Loebs. This caused a rift between Perez and Dc for several years.

Sad ending to a great run on this title that set the tone and backdrop for so much of what was to come in the title. Perez's mythology-based Wonder Woman reigned supreme for over a decade and in my eyes this was Wonder Woman at her very best. A kind, caring Diana in touch with her inner goddess.
Posted by SonOfCthulhu at 4:14 AM