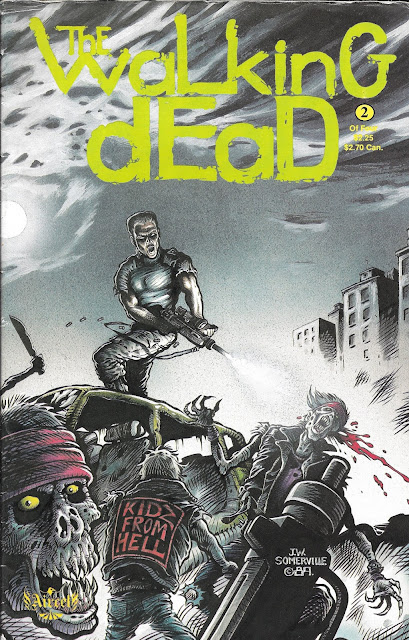 Kirkman ought to sue…oh, wait…

Here’s an oddball thing: Aircel producing a book about the zombie apocalypse featuring the struggles of a band of survivors against the evil of the undead. It is a book that doesn’t have Barry Blair’s grubby little paws all over it, too. The book was also far ahead of its time, doing in 1989 what Rob Kirkman would do in 2003 to great success with pretty much the same concept and book title. And that title is "The Walking Dead."

Sadly, it was only slated for a four issue arc and did not evolve into an ongoing series. I deem it a bit of a failure in that regard.

Why did it not catch on? Were audiences not ready for an ongoing mature zombie tale back around the roaring 90’s? I’d say certainly not, as Dead World pointed out around the same time, this was a concept that would create its own genre.

To figure out what the book did wrong, let’s take a dive into this issue. I’m certain the problem will become very clear in no time at all.

We begin with a Presidential message being broadcast from behind a barricaded White House where multitudes of undead mill about. So far, so good. 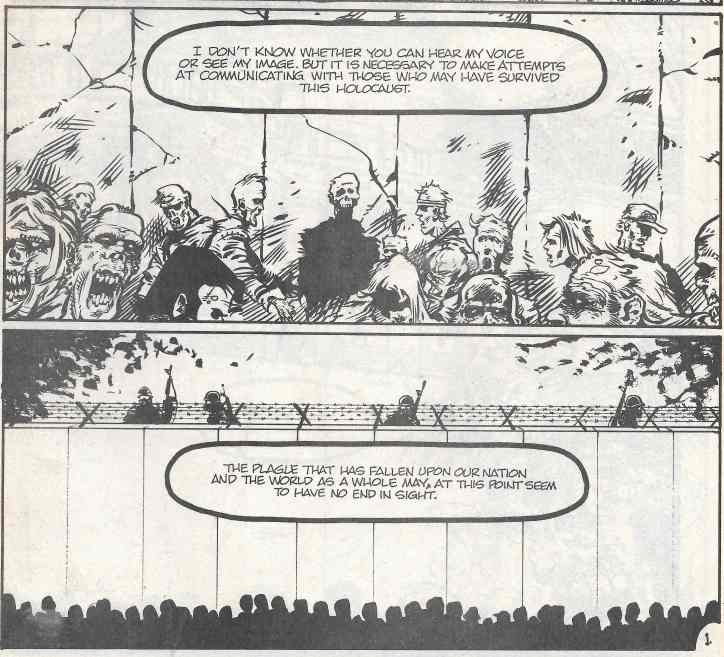 Next up is a double-page spread of the White House hemmed in by the undead with some more inspiring words being bandied about. 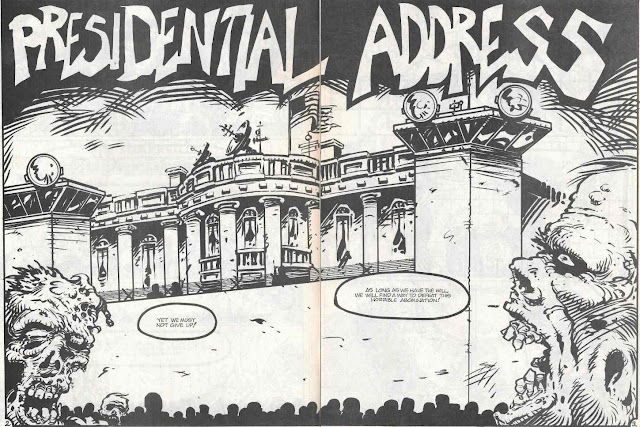 Once inside, we zoom in on the guy making these announcements, a guy I’m going to call “President Cyclops”. Note the extreme elements that have caused the zombie outbreak: a leak from a crashed alien spaceship somehow did the deed. Well, that’s pretty “out there” for a story concept, but not book disqualifying. 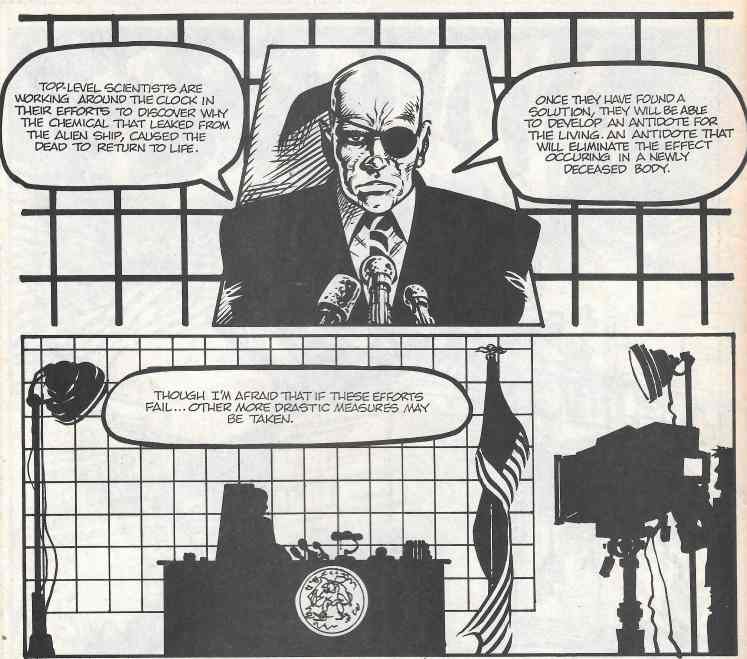 As Mr. President wraps up, the author/artist does one of the whole page deals that I kind dislike in that it does very little to move the story along and really serves to waste precious space. This should have been one panel, not an entire page. 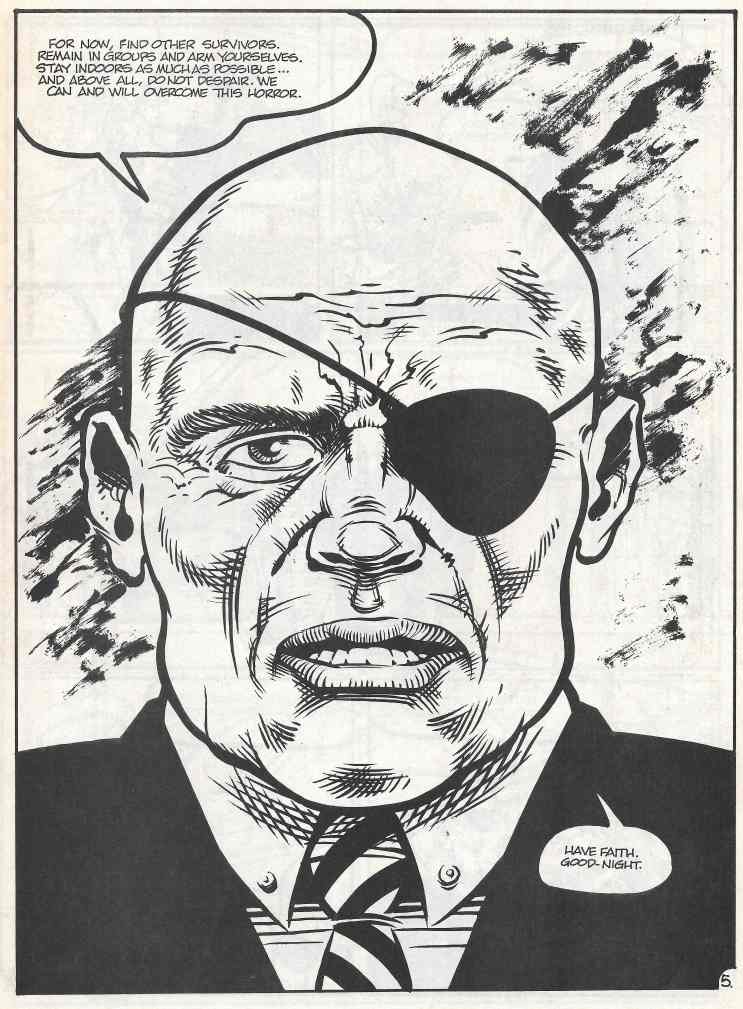 We have some back and forth with two of President Cyclops’s advisors. These two are mere cyphers for the opposing viewpoints in how to deal with this crisis. The general wants to nuke the zombies. The scientist wants to give survivors a chance. It feels like Somerville is boiling the tale down to only the essential elements. 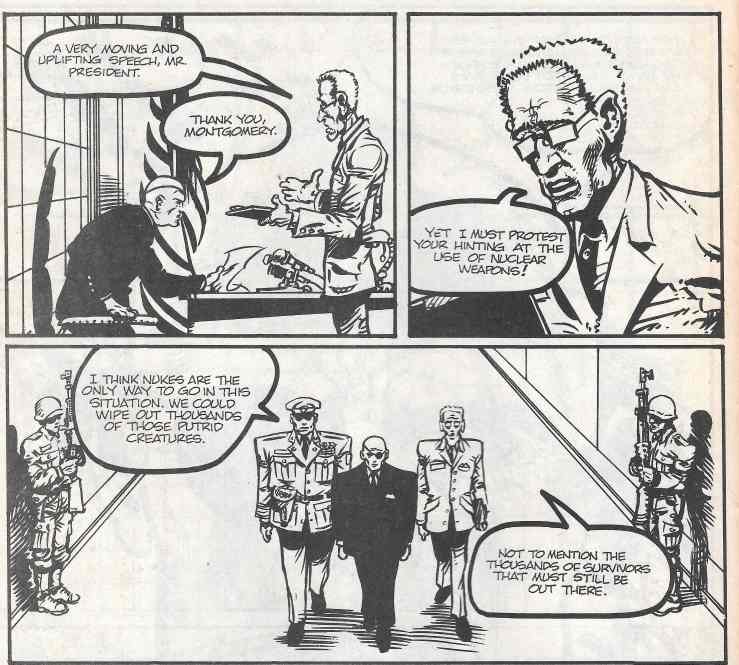 A doctor runs up just then and interrupts the men. President Cyclops’s wife is in critical condition and asking for him. 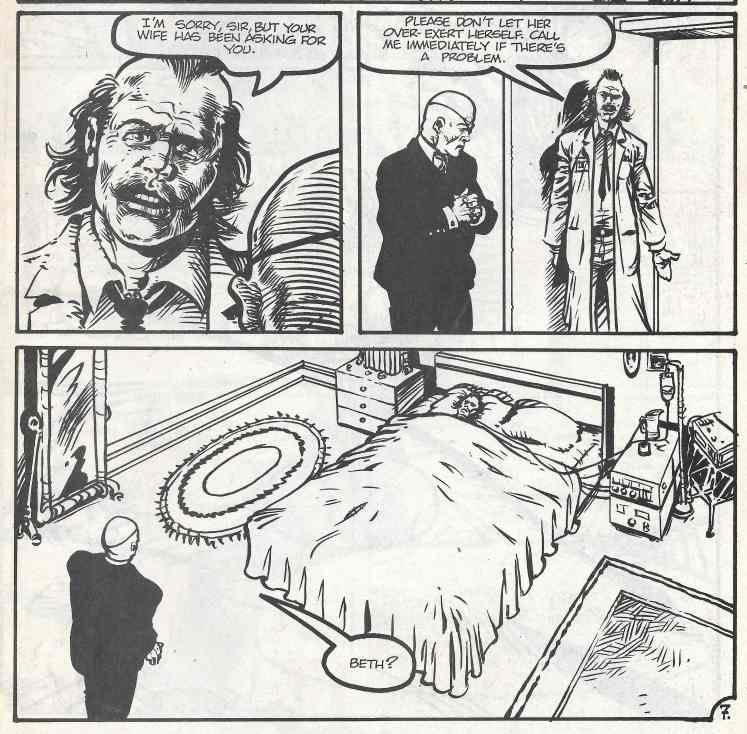 Gah! She looks like an undead already. Quick, kill it with fire! (Also another full page used on what could have been a single panel.) 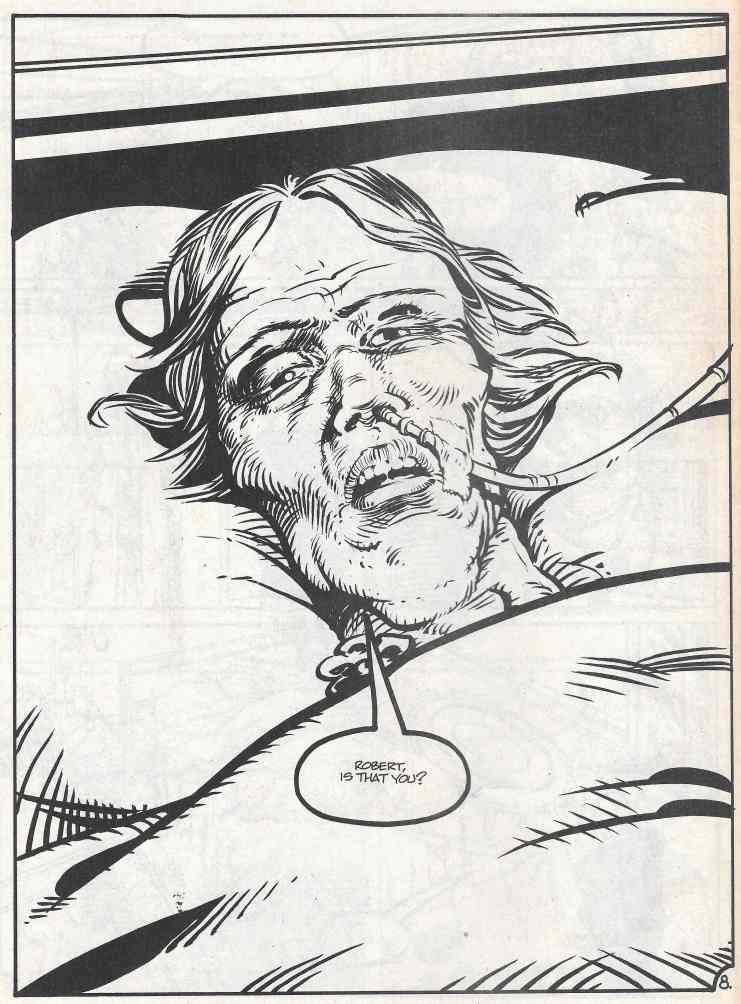 The pair share a tender moment and then the wife begins to convulse. The scene ends before she passes away, but I think everyone in the audience knows where this will end up going. She’ll die and…well, maybe that could get interesting. Will he kill her? Will she kill him? How will the book handle this? 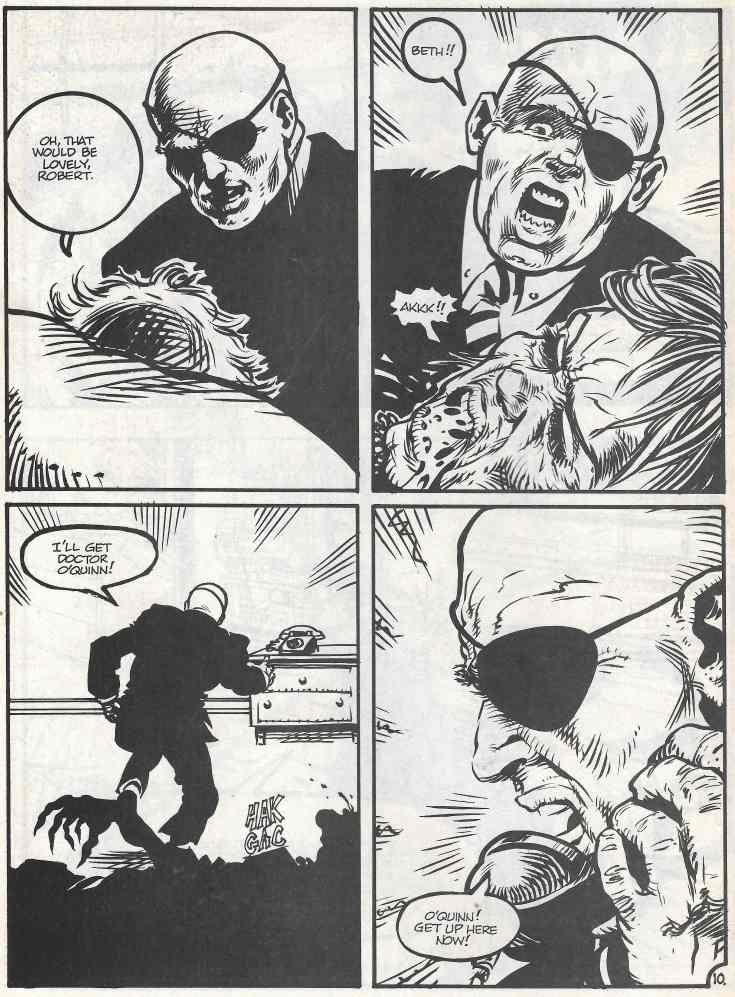 If we didn’t waste time on so many full page panels maybe we could have found out this very issue. But no, we’ve wasted half the book's pages to get to here. Now we switch to the OTHER plotline the book has going, a group of three survivors holed up in a police station. 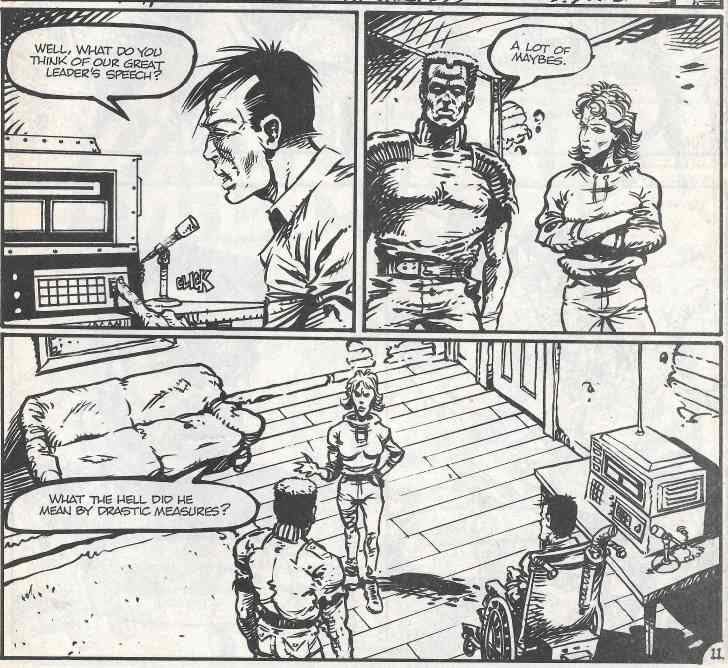 I think that’s a black guy Joe with a cool fade, the token hot chick Kris and a white guy Max in a wheelchair. Dibs on the wheelchair guy going out first.
They debate Cyclops’s message for a whole page, which is four panels… 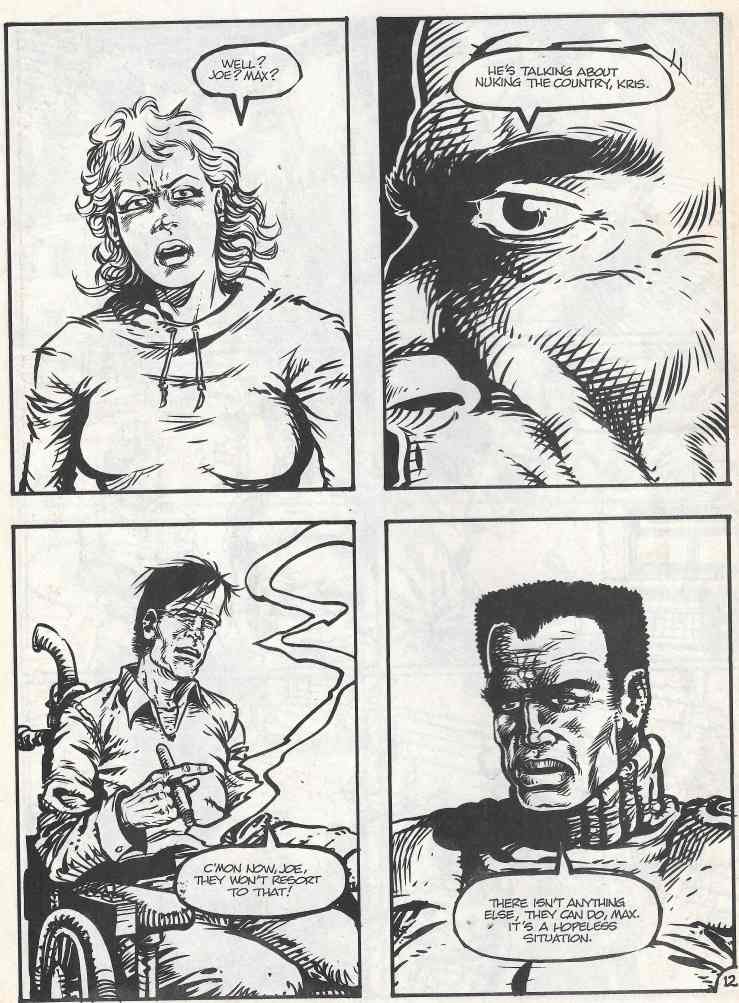 …and then the author realizes that he hasn’t shown us ANY zombies doing anything but milling around in the entire book…so he goes completely off the frickin’ rails. He does this by having the police station act like an earthquake is happening. 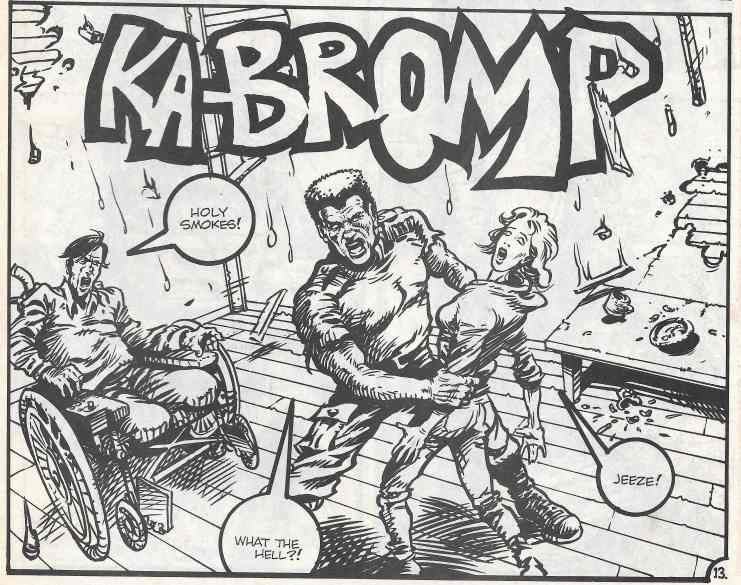 A fourth character Pete shows up and says… 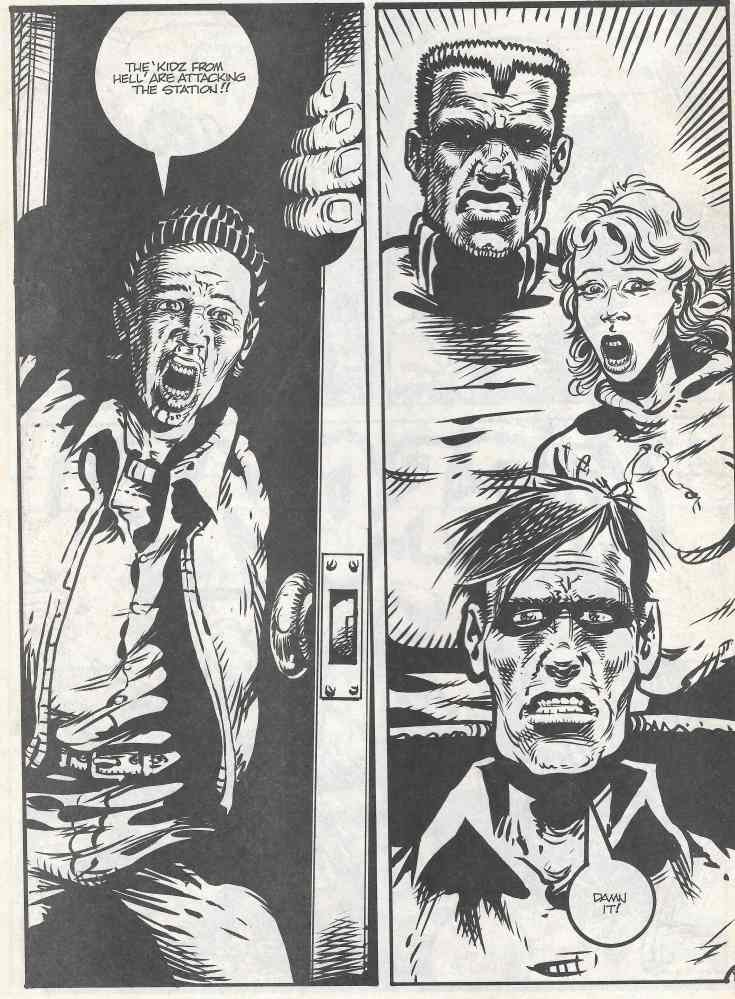 …the “Kidz From Hell” are attacking. And it takes me a minute to get that these are rival survivors trying to gain access to the police station for their military grade hardware to use in a bid for survival against the zombies. 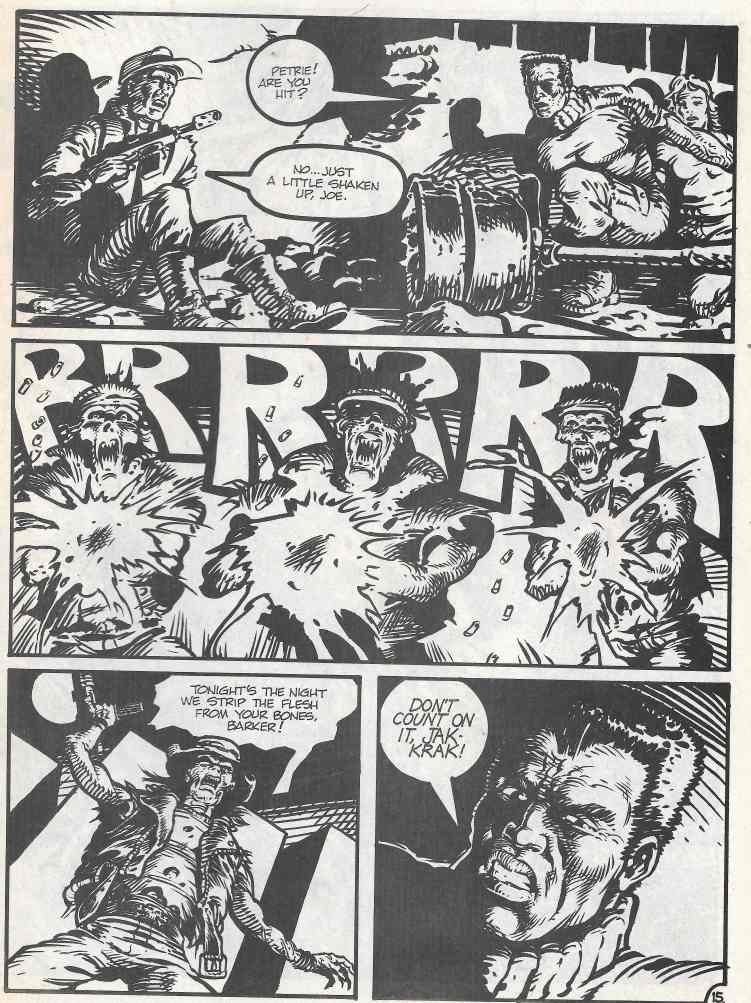 No. The Kidz From Hell ARE the zombies. 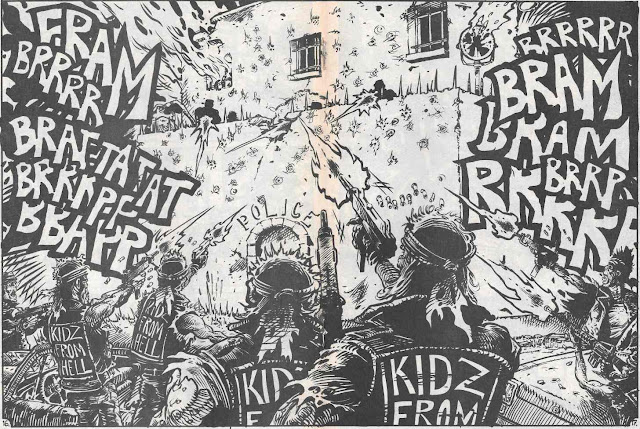 Yeah, this is too much for me. I’m off this train. Zombies using machine guns and having names are where I stop. I mean, did they name the gang before or after they turned? And if after, which onf of them knew how to sew the gang affiliation onto all their jackets? Which Zombie did that? This turns it from horror show into action movie with villains who just have a weird dietary requirement. I mean, they are no longer zombies at all, in my opinion.

For the sake of the book and the review, I try to put my judgements aside and see where this goes. And where it goes is even more batshit crazy, with Somerville wasting double and single page spreads like he has a hundred pages to fill this issue and only 12 hours to do it. 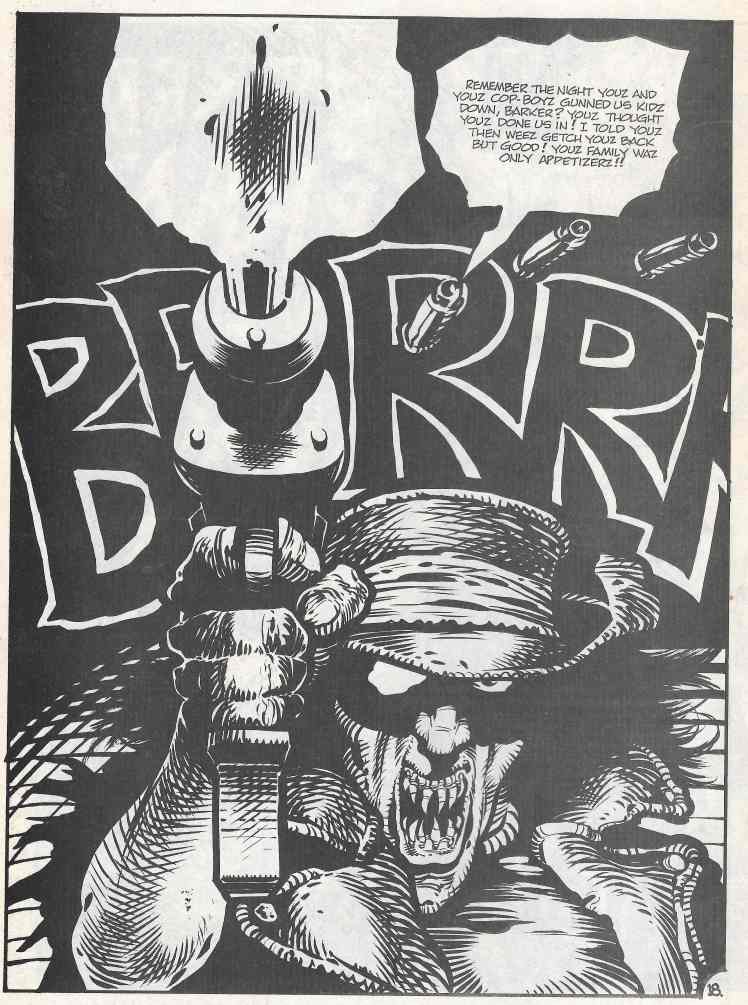 Pete gets holed in all this, which is a shame. Pete, we hardly knew you. Primarily because of the panel size you weren’t given enough space to say or do anything that showed us your character. We’ll …probably not miss ya, buddy. 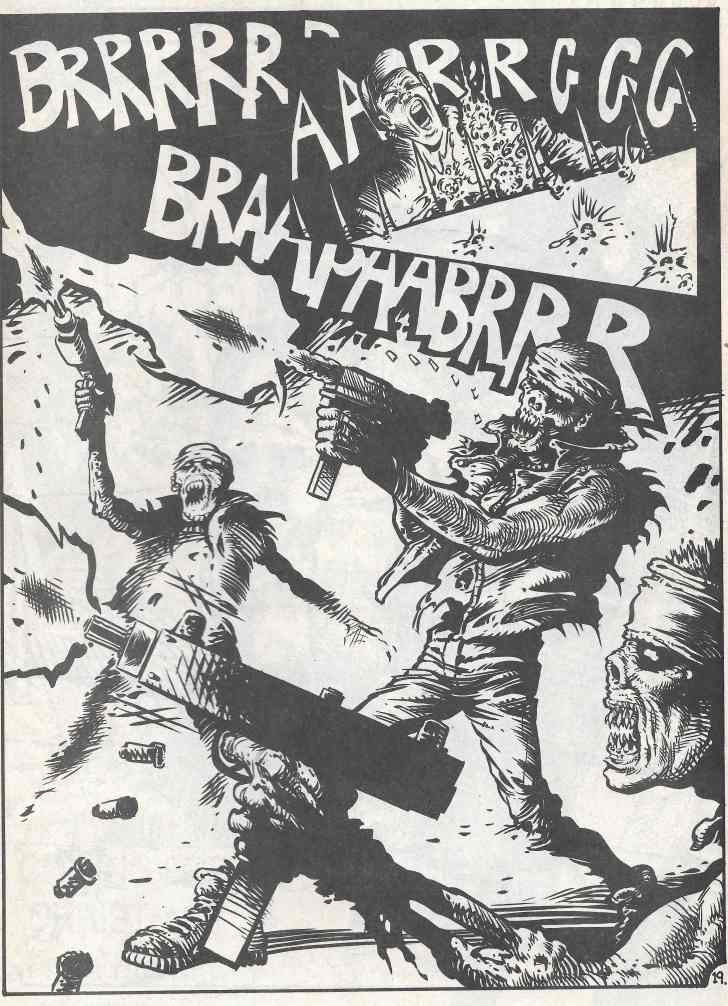 With Pete dead, Joe goes all Rambo on the zombies… 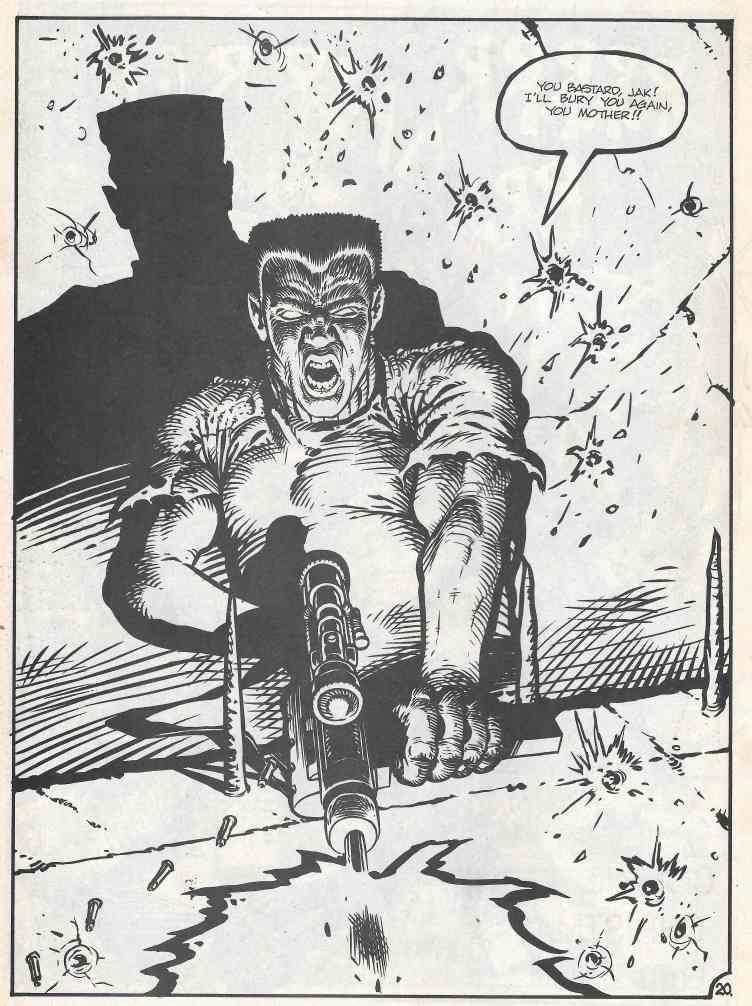 …and Max tries to get down the elevator to the van in case they need to bail fast. For a moment I think he’s not going to make it and then suddenly the elevator doors open and he’s right at the van. 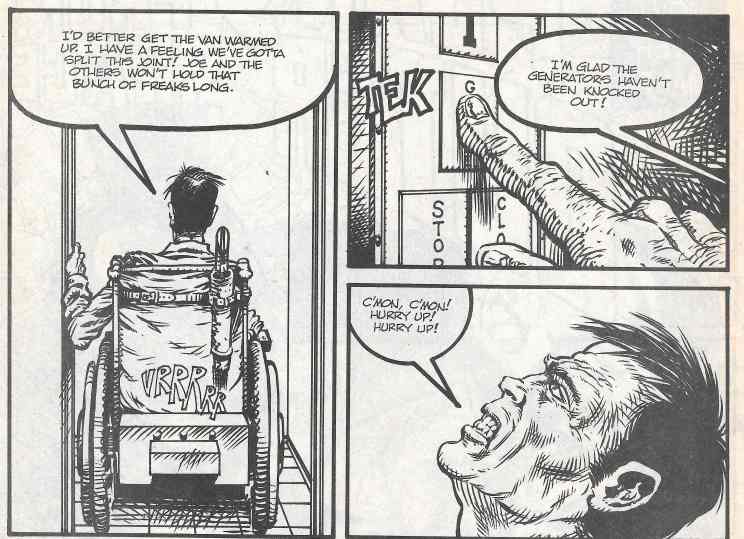 But then the Kidz From Hell pull out their big guns (after Joe makes a few heads go pop). And by big guns, I mean military ordinance that I’m not even sure they would know how to properly work if they were alive… 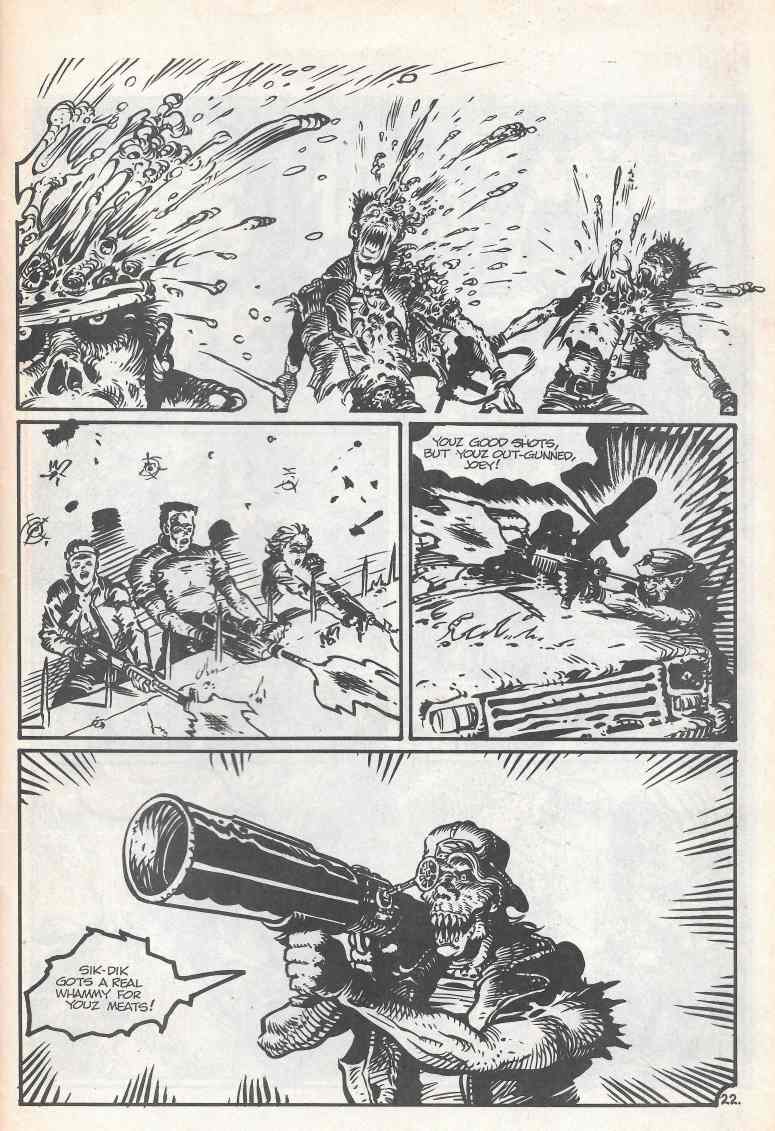 …and with that they KRAFAM the building which leads Joe and team to get off the roof and head to the van. I though Pete was dead, but somehow he’s still here walking and talking. More disturbing is the zombies are using tactics and speed to act…just like people that are alive. 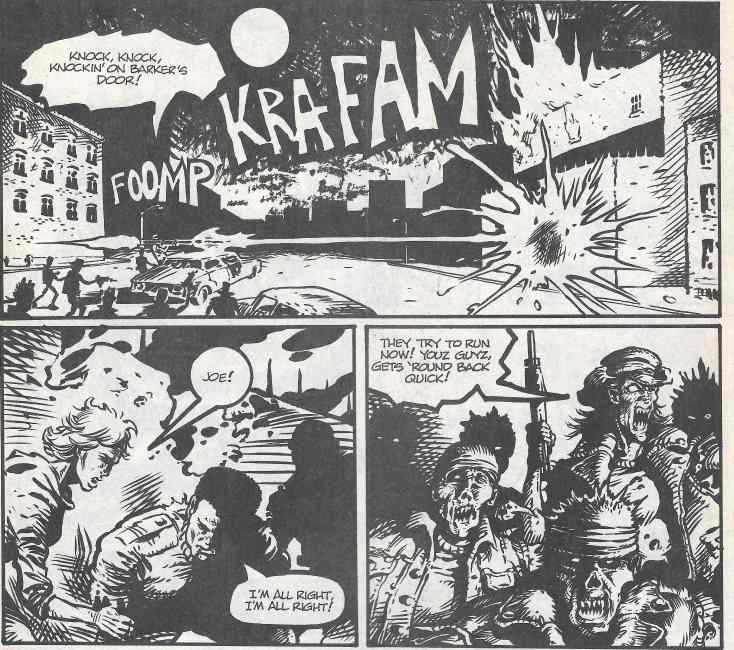 The humans find Max trapped under some beams and he valiantly sacrifices himself so they can get to the van. 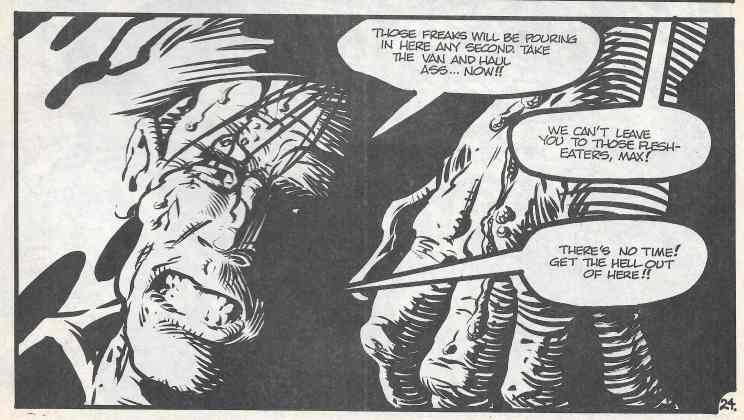 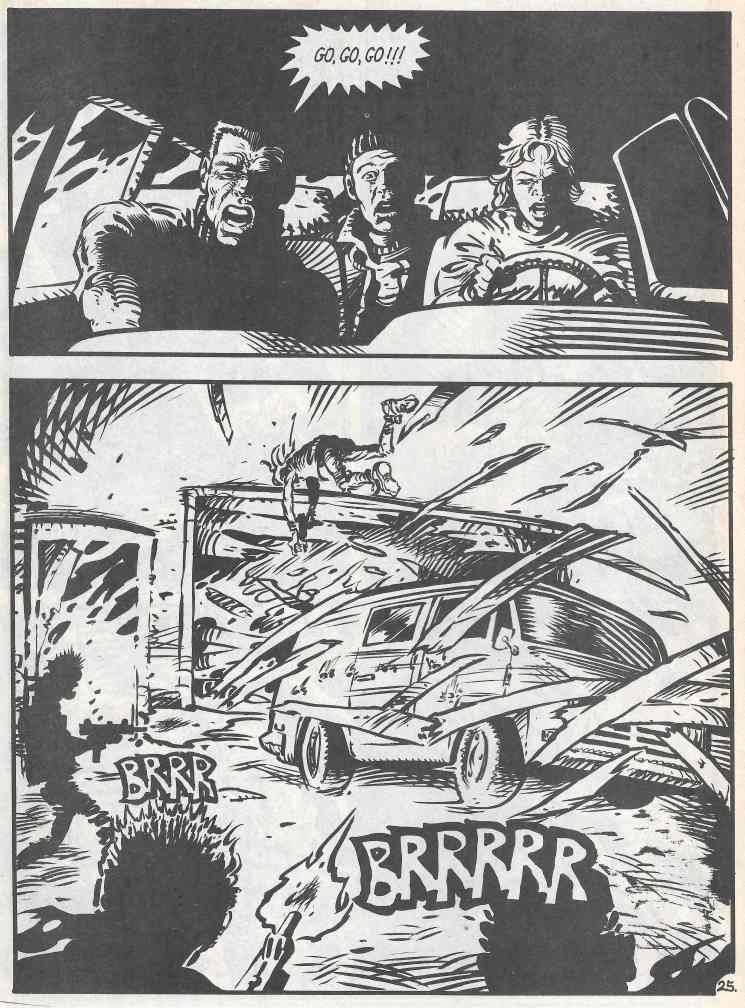 Max starts his final stand against the onrushing hoards… 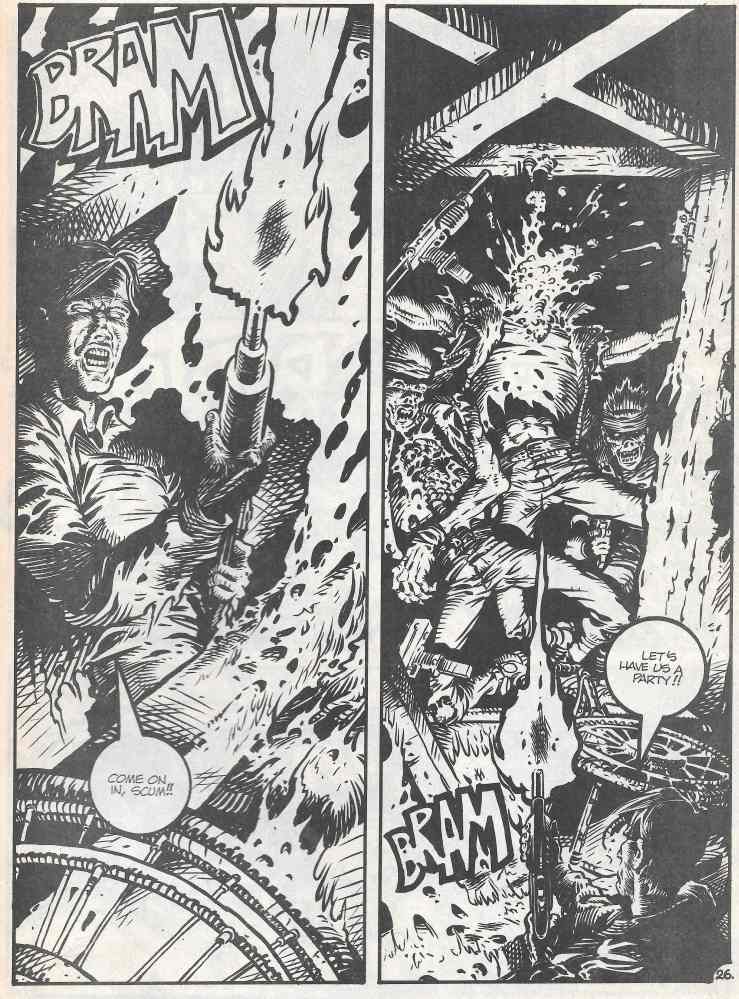 And Joe decides after scragging a carload full of zeds following them, to make a very dumb move. 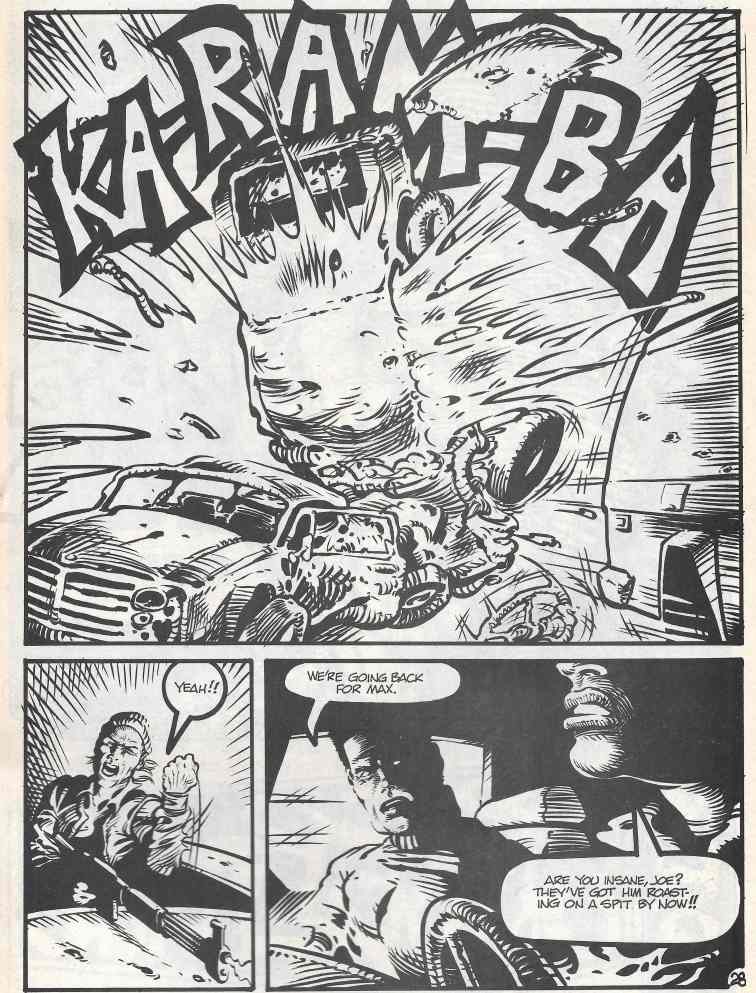 You just LEFT him. Why didn’t you try saving him while you were there? And that’s where our issue ends.

Why isn’t this as popular as Kirkman’s extremely profitable zombie fest? For one thing, they have made the zombies too human. They walk, they talk, they plan, they carry out coordinated strikes. They are undead in heartbeat only.

True zombies are, in my opinion, the type of things that don’t act like us. They have some of our memories, and may react in some ways partially human, but mostly are an inhuman and inhumane force of nature. They are a wave of floodwater that washes people away without malice or anger. They are not personalities, but are more a symbol of time and age and the uncaring universe ravaging us without caring it has done so.

This book doesn’t have zombies. It truly had a “walking dead” that broke the stereotype, but in such a way that the story wasn’t really something I cared about. Even “Stars and Stripes” zombie or the gooey one from Return of the Living Dead were more in line with what a zombie is.

This just had gangs of people, some alive and some not, shooting at each other. And that’s not going to get me excited about a zombie book.
Posted by SonOfCthulhu at 2:31 AM