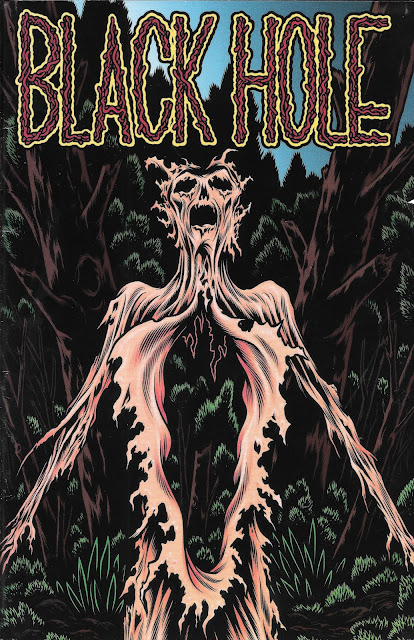 I encountered Charles Burns work in 1984. Hidden in the densely packed pages of Heavy Metal’s March 1984 (Vol7, No 12) magazine, was part of his first El Borbah story, serialized over several issues. I was buying the magazine for Moebius’ The Incal and Ranxerox and Tex Arcana.

I appreciated that Heavy Metal wasn’t a kid’s comic book. That it contained art that challenged you to look beyond the four corners of a page for a meaning to what you were reading. Many of the one and two-part stories from the magazine would stick with me for years. Those weren’t what you bought the mag for, but they were part of the package deal of getting an anthology of weirdness like Heavy Metal. 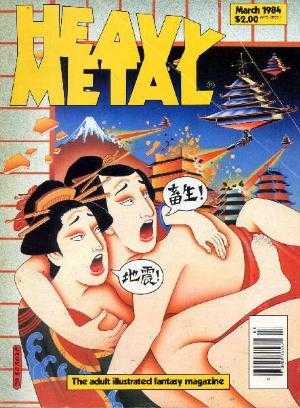 And nothing felt as strange as El Borbah.

The art was beautiful, yet the hero was repulsive. He looked like Andre the giant wearing a luchador mask. Burns thick non-conformist lines only added to the strangeness. Burns’ art does not include variations in color. It is, in strictest sense, black and white art. Any shading or highlighting is accomplished by varying the line size from the normal bold strokes that outline figures. I’d never seen anything like it.

It made me quite confused. I wanted to like it, but found it just too challenging. It was an instant read for me, but it made little to no sense. His hero smoked and drank. The stories were filled with oddities. I had met my match.

When Black Hole dropped into the Crapbox, it brought back all of the memories of reading Burns when I was sixteen. The twelve issue series was well known to me, although I had yet to pick it up. Beyond the mere nostalgic twinge, there was a comfort in approaching this particular storyline.

I grew up reading Burns in a way. So a story by Burns that conflates a symbolic representation of puberty with a horrific body mutation infection felt…comforting? Understandable? I’m still unsure.

What I’m not unsure about is the odd tingles that Burns’ art gives me. Like Junji Ito’s manga, the images that Burns conjures up are at once eye-catching as they are revolting. However, Burns manages to infuse a magnificent beauty to certain panels that transcends the story he is telling.

I don’t need to tout this book. Black Hole has won more Harvey Awards than you can shake a stick at, as well as the 2006 Ignatz Aware for Outstanding Anthology or Collection, the 2007 Essentials of Angouleme award from Angouleme Internation Comics Festival, and the third best foreign comic book published in Japan for the 2013 Gaiman Award presentation.

A Crapbox seal of approval is something Black Hole doesn’t require.

You are here, so let’s dive right in. There are TONS of metaphors here so I will state that I can’t give you a real teardown of the issue and you get all of it. Mainly because I don’t.

But, also because the book is more of an experience. Posting a page or two here or there won’t give you the same feeling as looking at say a picture of a dissected frog, who’s body incision looks much like a female vagina while knowing the preceding page shows the same incision shape against a black backdrop.

It is a book you have to wander through to truly GET.

All I can do is try to pull you in a little, so you know what you will get when you purchase your copy.

We start before any title page showing what our story will be about. This isn’t stated anywhere in this issue and I would suspect that this is the clearest statement about the basis of the story found throughout the 12 issues. It is like Burns wants to get it out of the way so he can get on with making magic with it.

Here we have a before picture of a lad… 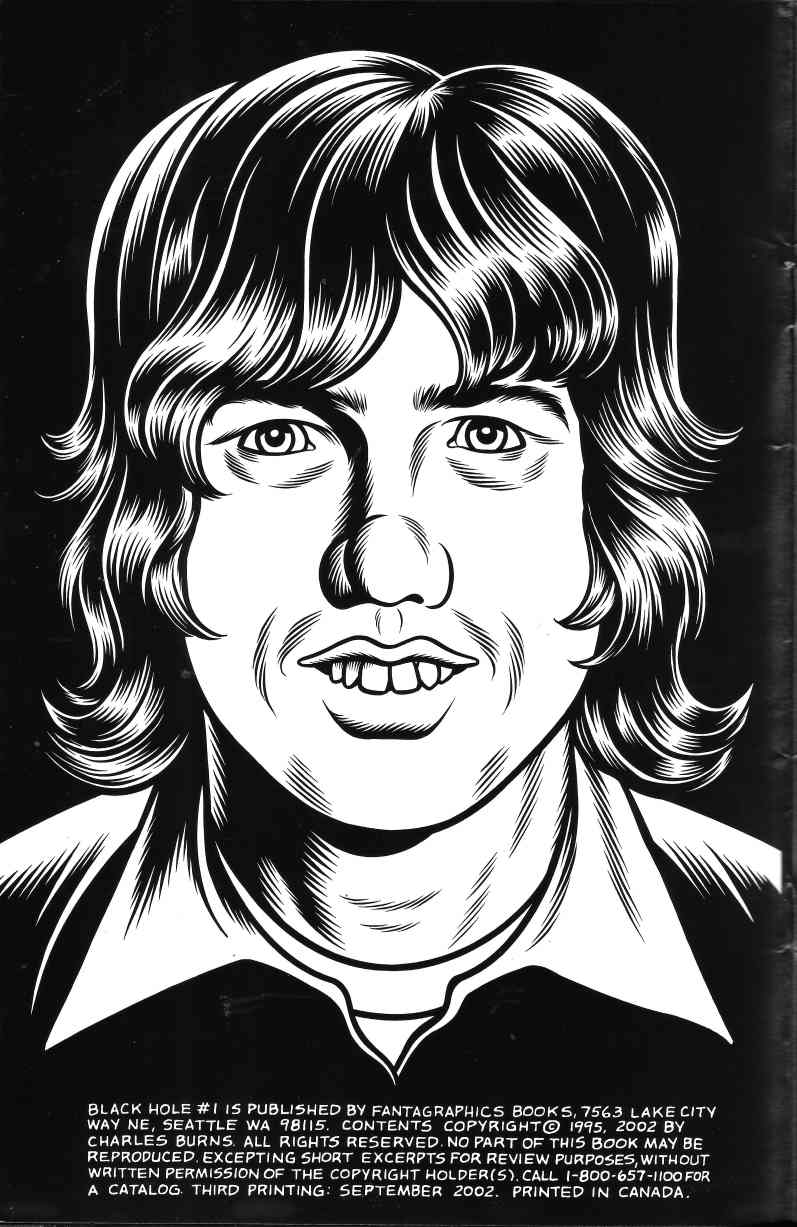 …and an after infection picture of the same boy. Is this a character we will meet? Or is this just an example? Won’t know until we keep turning pages. 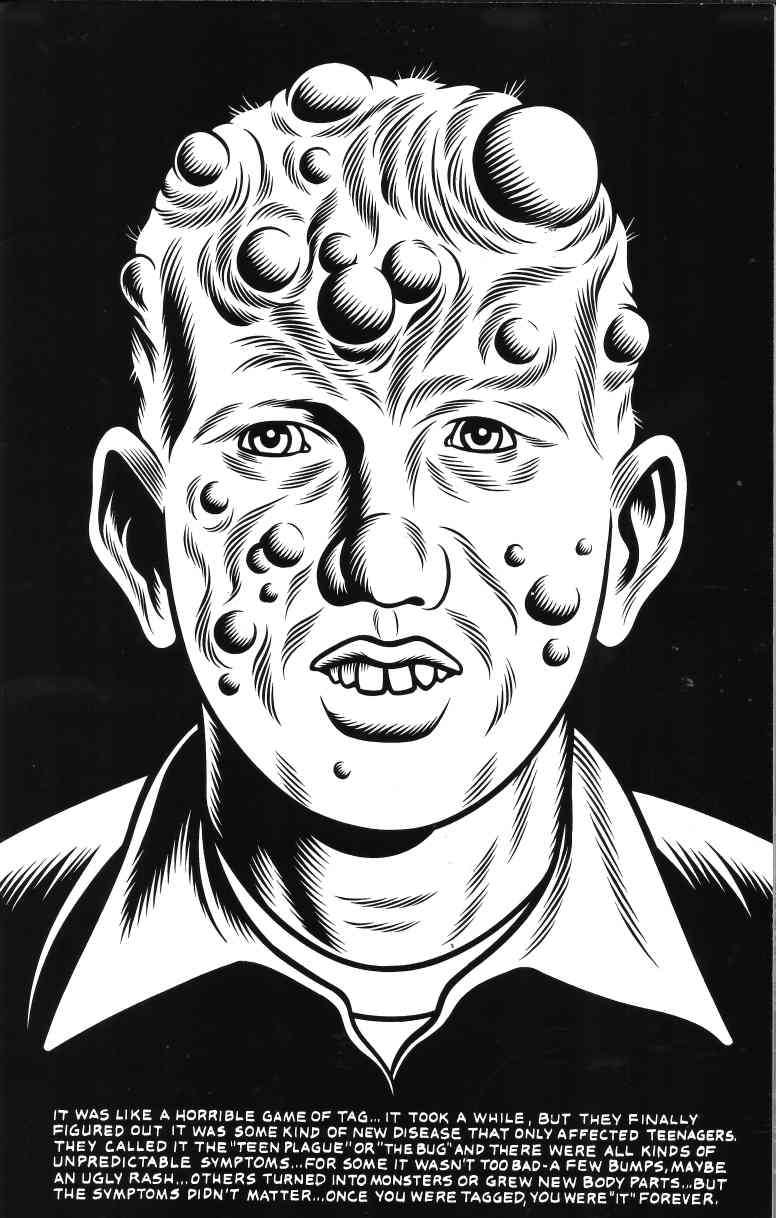 Note also that the method of transmission of said disease isn’t brought up here, but it is certain to be sexual. The idea is threaded through the graphics on every page and the shed human skin form on the cover. To play that part up, the first story title and the frog incision I mentioned earlier come up next. 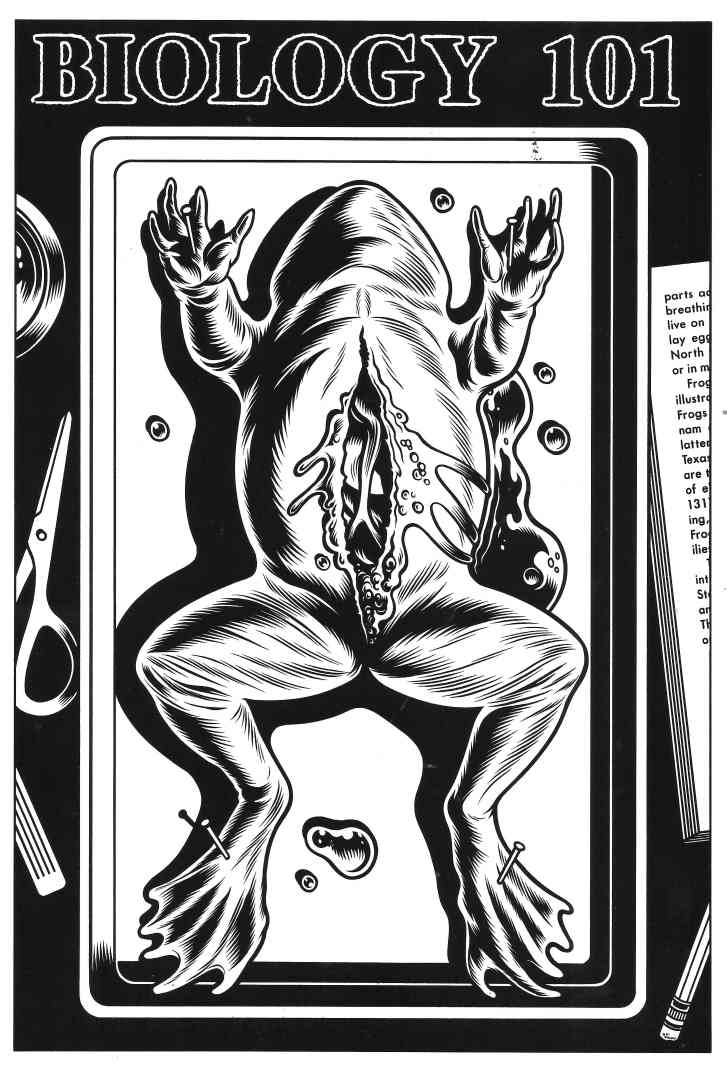 These next few pages set the tone and perhaps foreshadow the entire story. I really hate that I passed on pulling the graphic novel printing of this book when I was last at Half Price, because of this opening. It just resonates like this is our story hook.

Keith is in Biology in school. He is partnered with a pretty girl. He feels the social pressure to “man up.” To take care of business for her. This is the “coming of age” portion writ small. 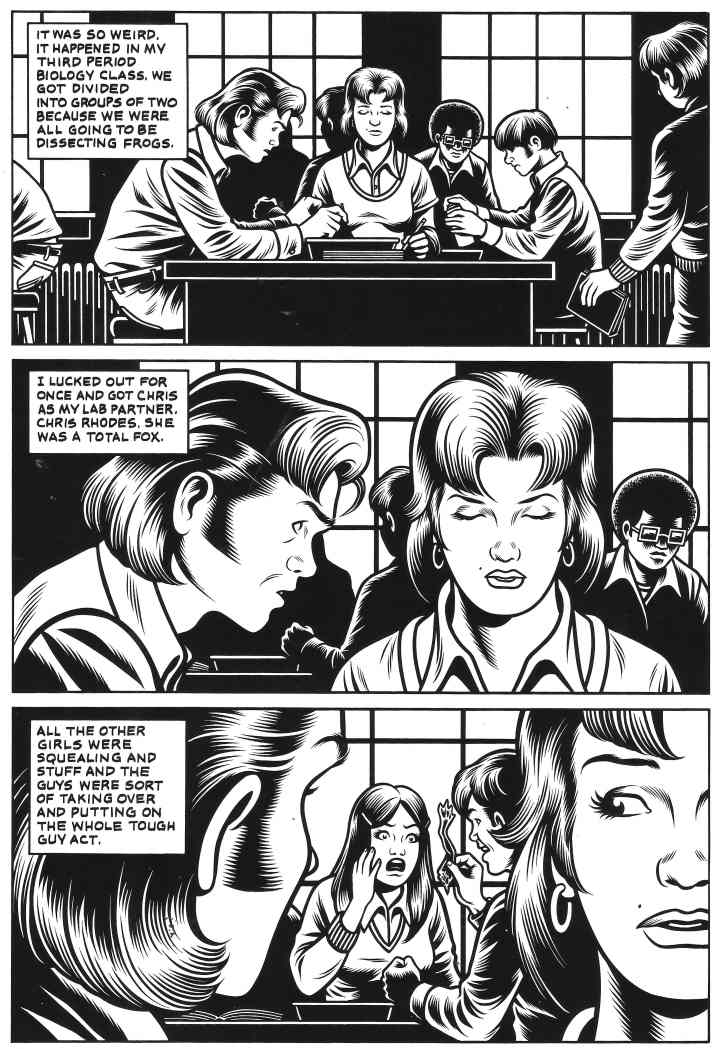 But when he accepts that role, he finds himself paralyzed before he can follow through. He sees his future and wants no part of it. This is the struggle we all face at this age. It speaks to how we view the world and our changing part in it. As we move from child to adult, we shift from reacting to events to being the cause of them. We accept the responsibility of charting our destiny and the destiny of humanity. 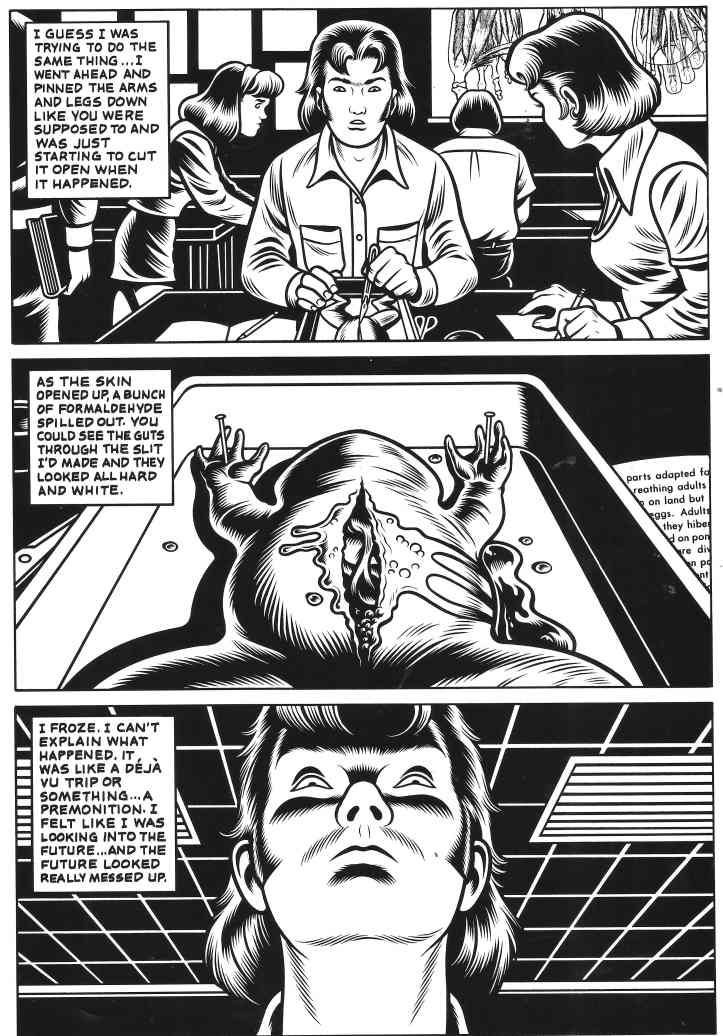 (we are on page five folks.)

Through this event, Keith comes to realize the changes his body will be going though and the desire to be with a woman. However, in Burns’ vision, these things are terrifying. The link to death, injury, mutilation and shame. This is the Black Hole that Keith is falling into. 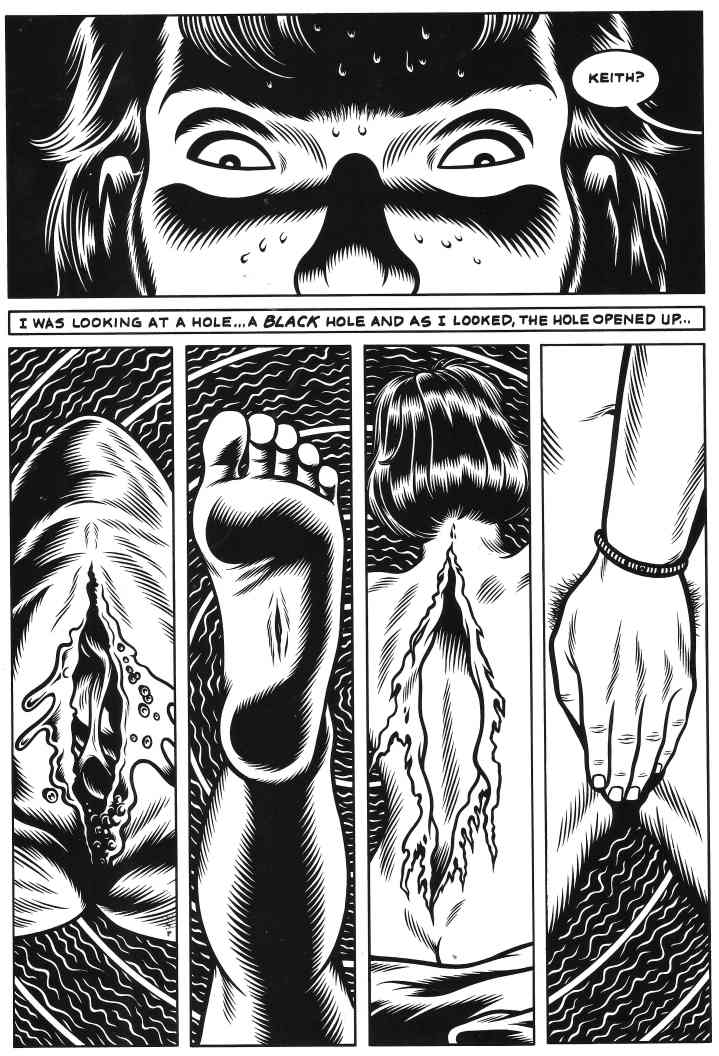 Keith faints. When he comes to he finds judgment and condemnation from everyone but Chris. 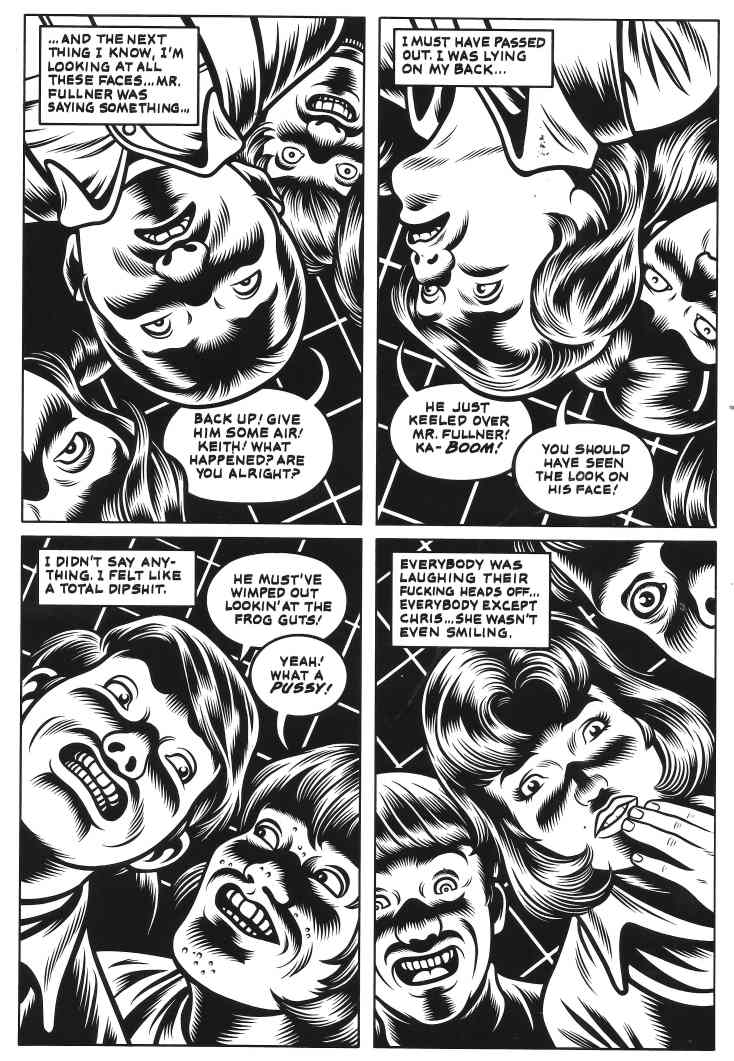 The book then shifts gears with a segment called Planet Xeno. We spring forward in time what may be weeks or months. Keith and his friends are sharing a joint as they embark on a trip to a spot in the forest. 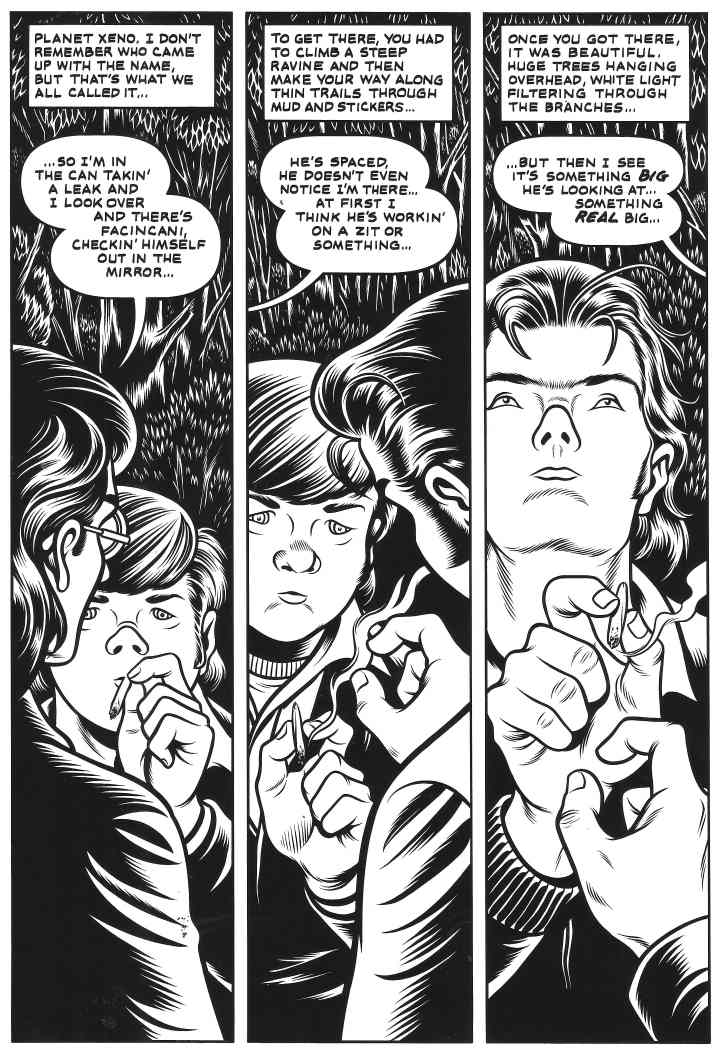 The trip is meant to be an escape to where they can get high in peace. However, this is where the kids who have the Bug live. Exiled here, cast out from society, they live in tents and scavenge what they can to survive. I find the parallel to teen mothers and fathers almost too easy a connection to make. These are the people of the scarlet letter. 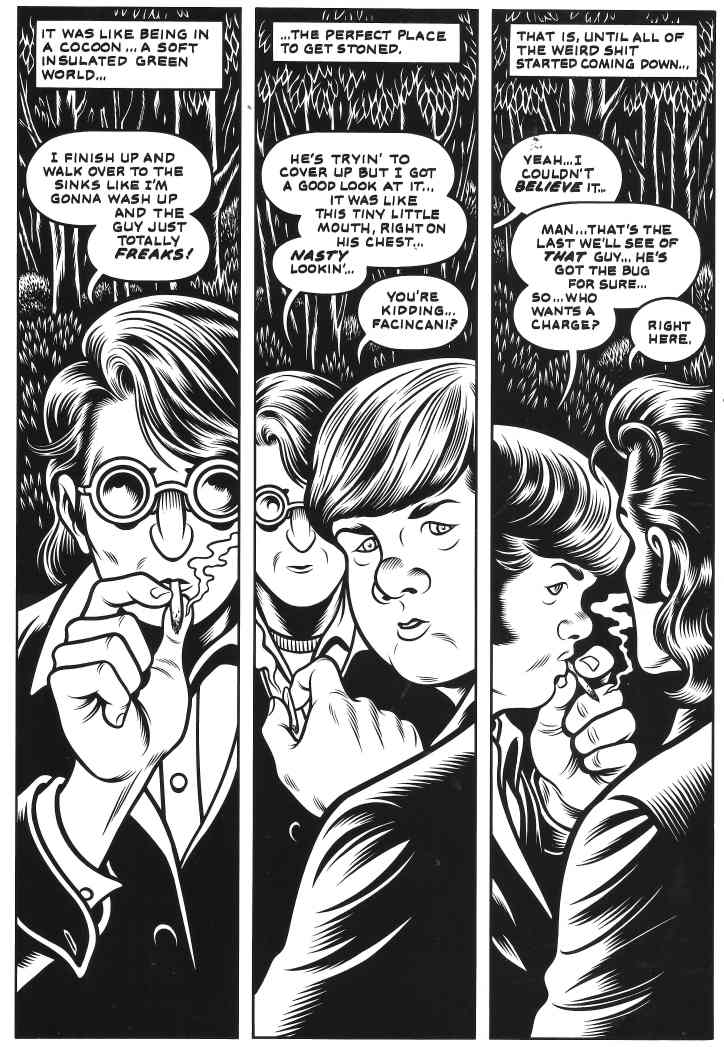 Keith happens to spot one while taking a charge from another boy. The group goes to check it out. 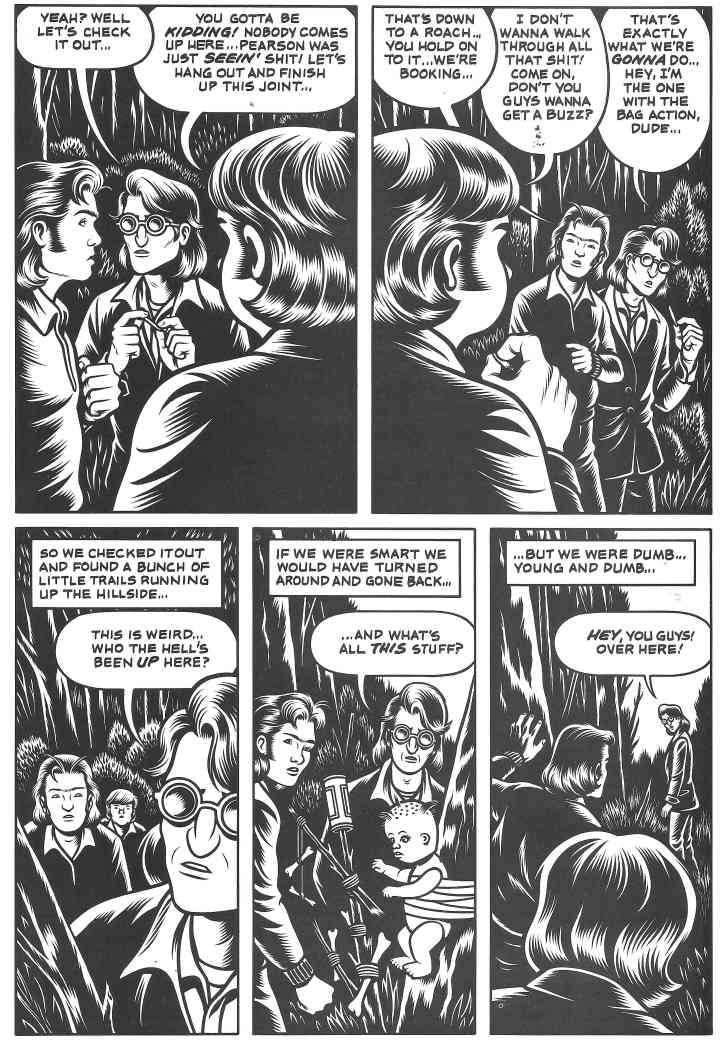 They find a tent… 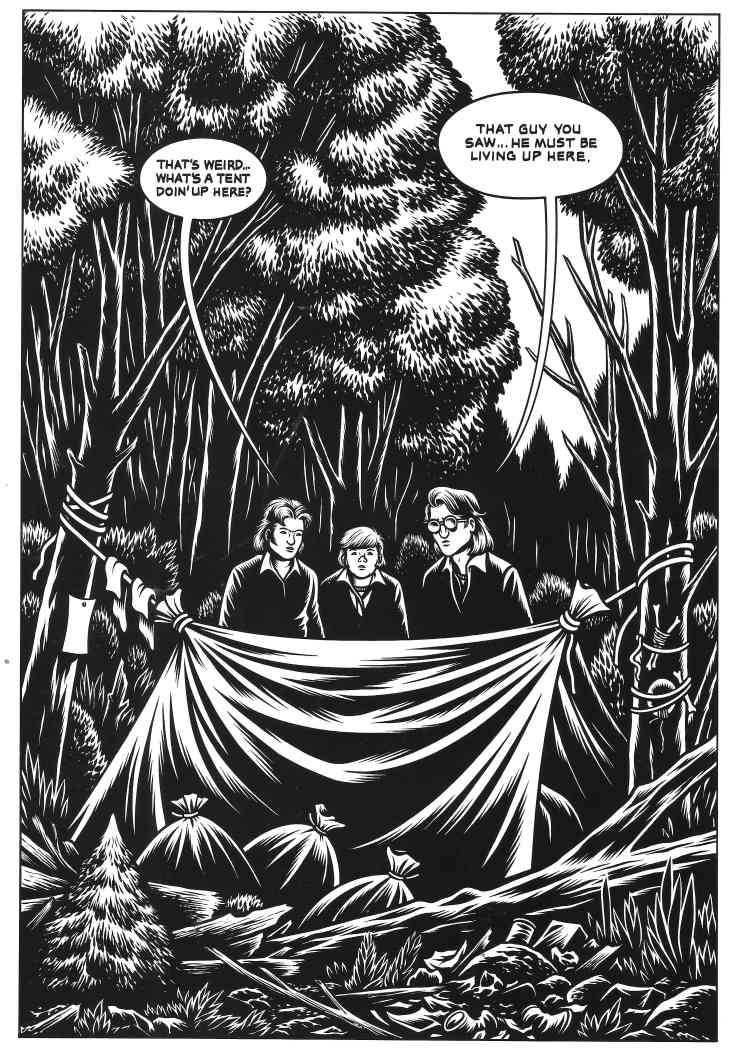 …which is filled with the things a teenager might have. Unlike his fellows, Keith doesn’t intrude on the campsite, but instead searches the surrounding forest. 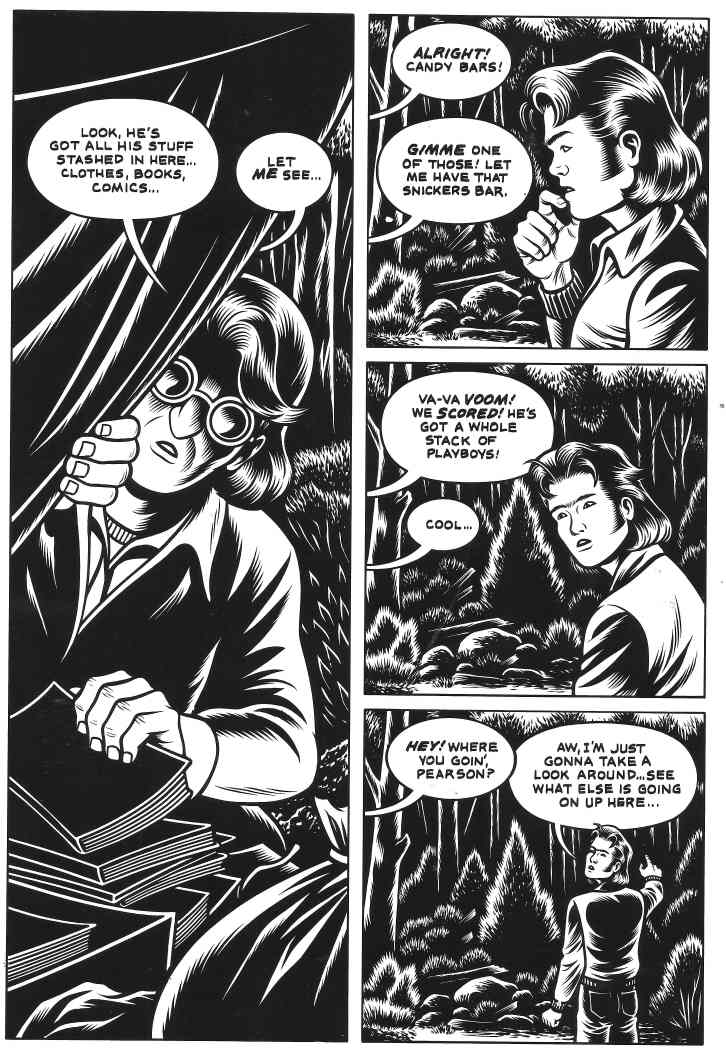 He comes across a shed human skin… 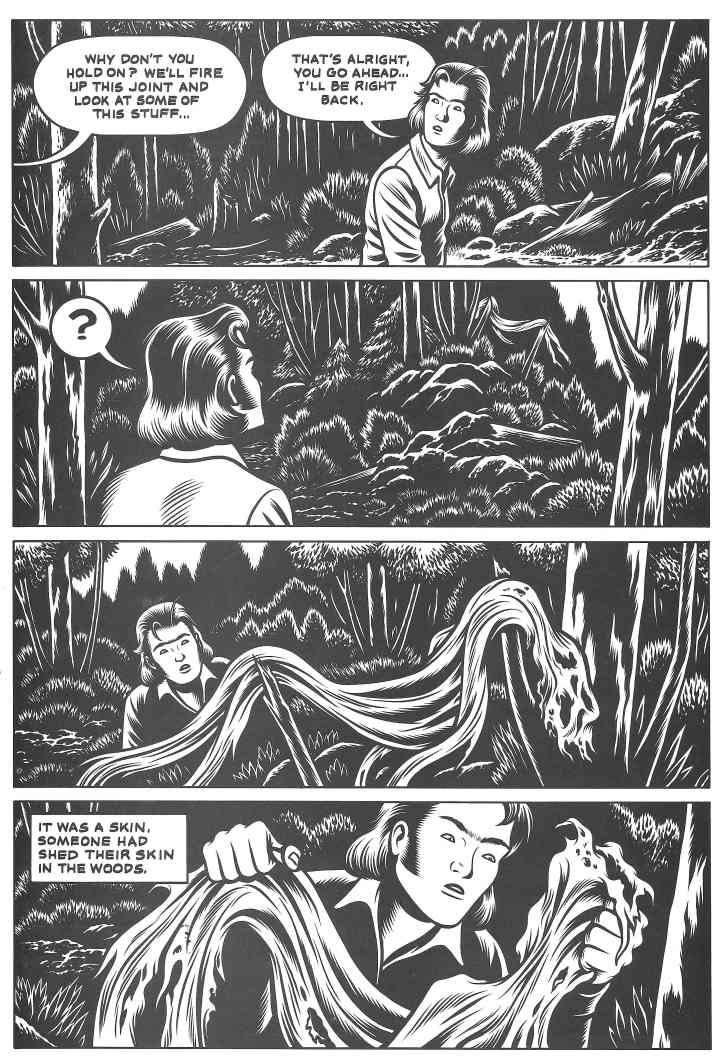 …and that skin is decidedly female. Keith evokes our empathy for this unknown girl who shed this skin. 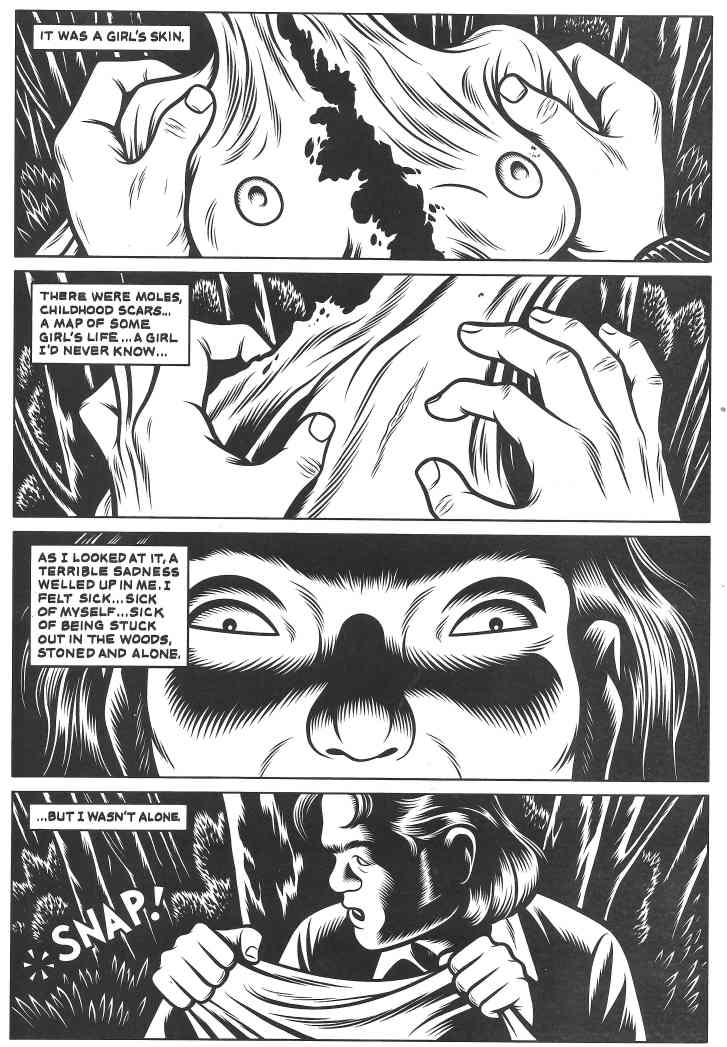 Just then he encounters one of the camp’s inhabitants. It is a heartbreaking meeting. Keith’s thoughts describe in detail the torturous conditions this flesh affords the person inhabiting it. A person who just wants Keith to “Go away.” 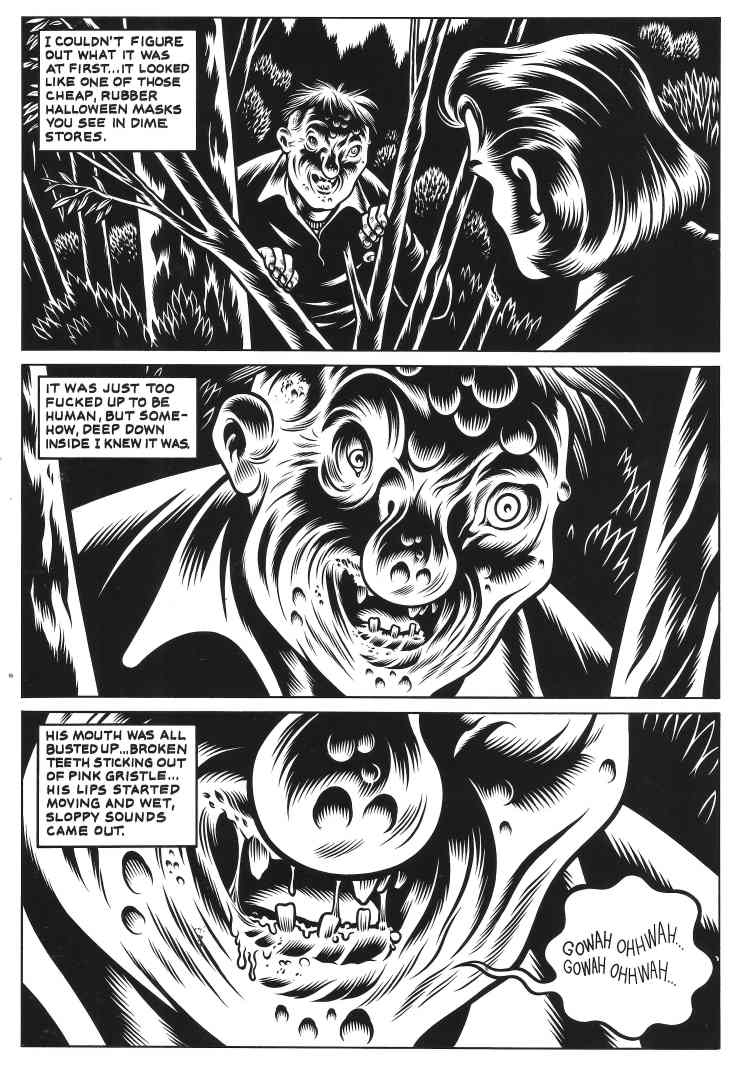 On his return trip, he discovers more trails and more camps before he makes it back to the original tent and his friends. They have discovered the identity of the tent’s occupant. 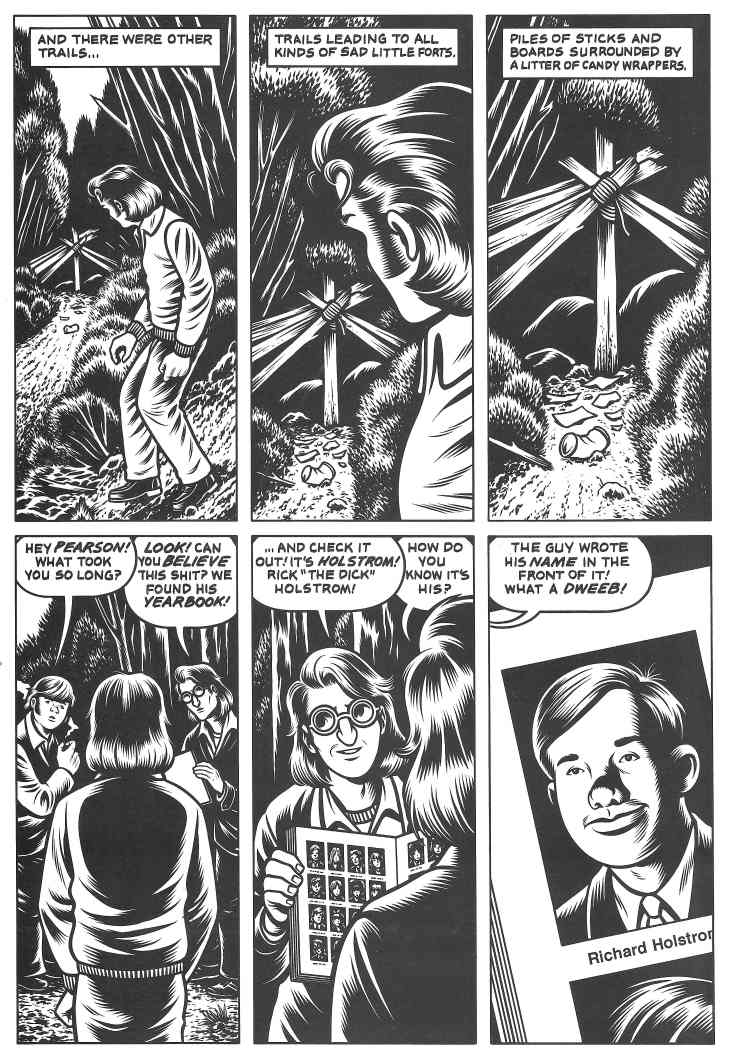 However, Keith’s compassion is not shared by his companions. They destroy the tent before leaving. 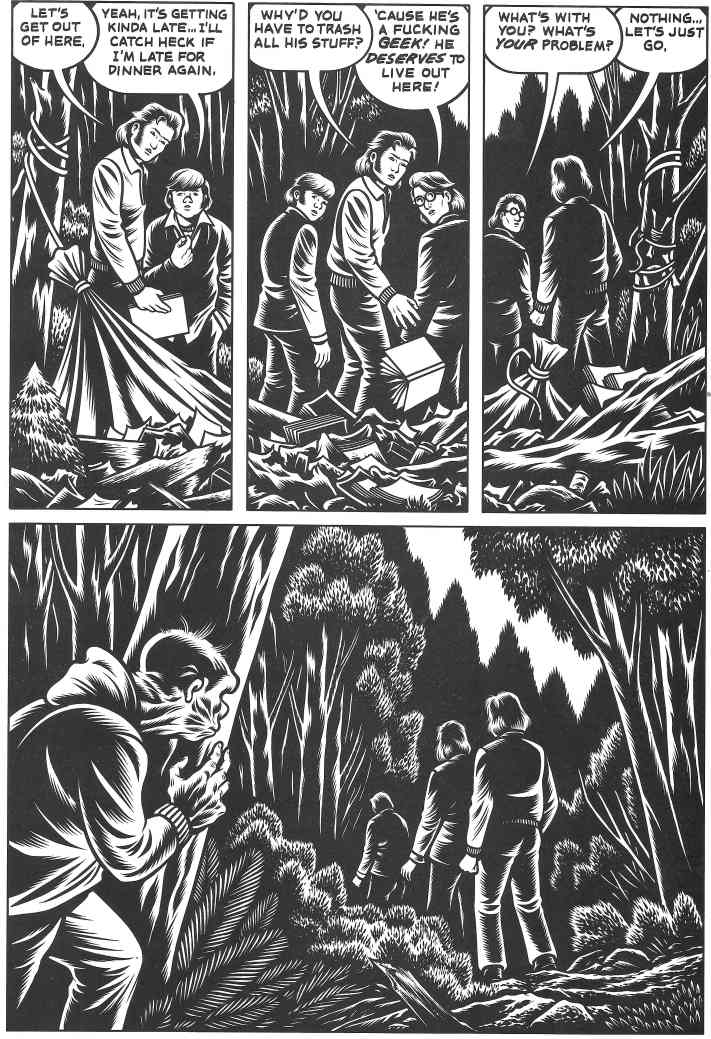 The third portion of the story is “sssssssss” and it is a dream that Chris has while living in the camp. The visuals are as bizarre as they are open to interpretation. After showing Chris slumbering we ease into her dreams, our clue being the irregular wave pattern of the panel boarders. She is having a dream of being sexually active, finding attraction to guys she knows. The odd disfigurement on one of them puzzles me. 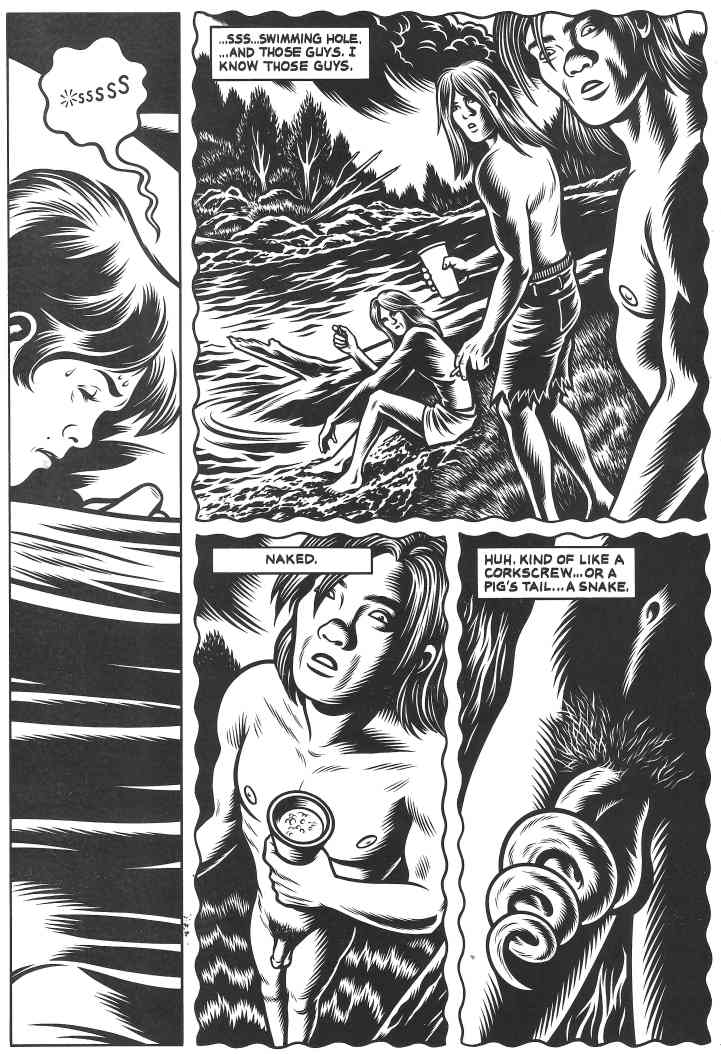 Then she looks down to find herself standing in glass. She slices open her foot. In the wound she finds a rolled-up scroll. Again, we see a very vagina-like symbolism in this along with the snake graphic depicted on the scroll. 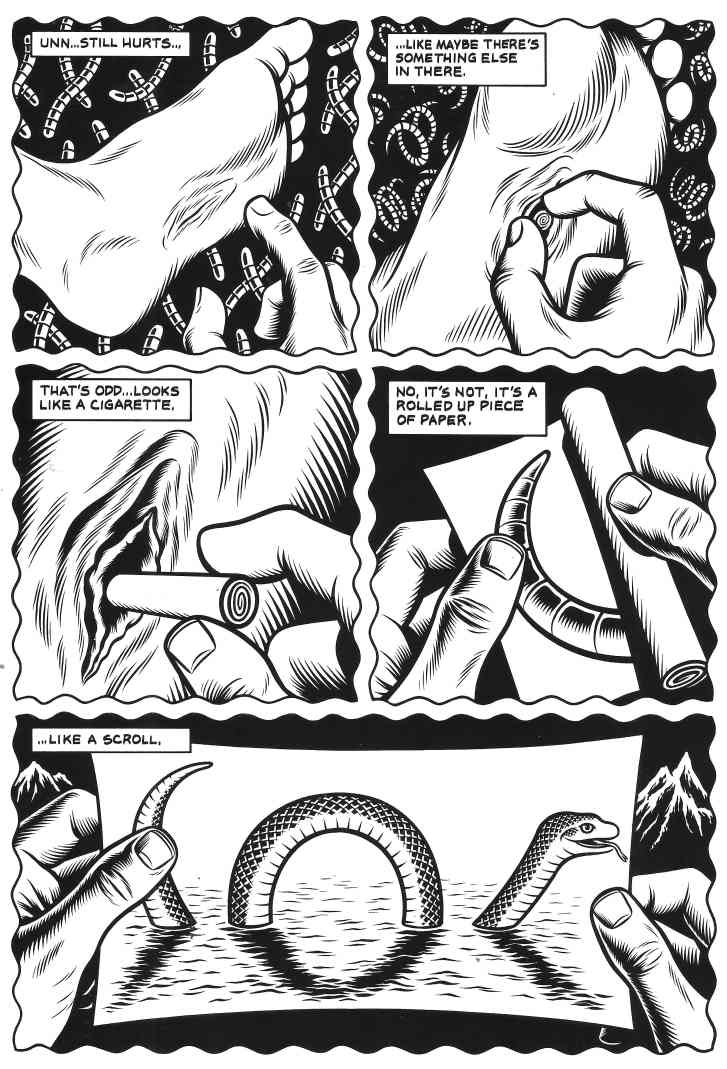 The scroll changes, drawing Chris in as the images move to a cave behind the snake. It is half filled with water and in the water, people congregate. They sit immersed chest-high and eat from the garbage that floats around them.

Keith appears from the corner of her vision, as she is now a part of the picture too. He offers her something that is “good to eat” yet appears to be some kind of organ. As well his aspect changes from that of a person to that of the penis-like snake that has followed this dream from the beginning. 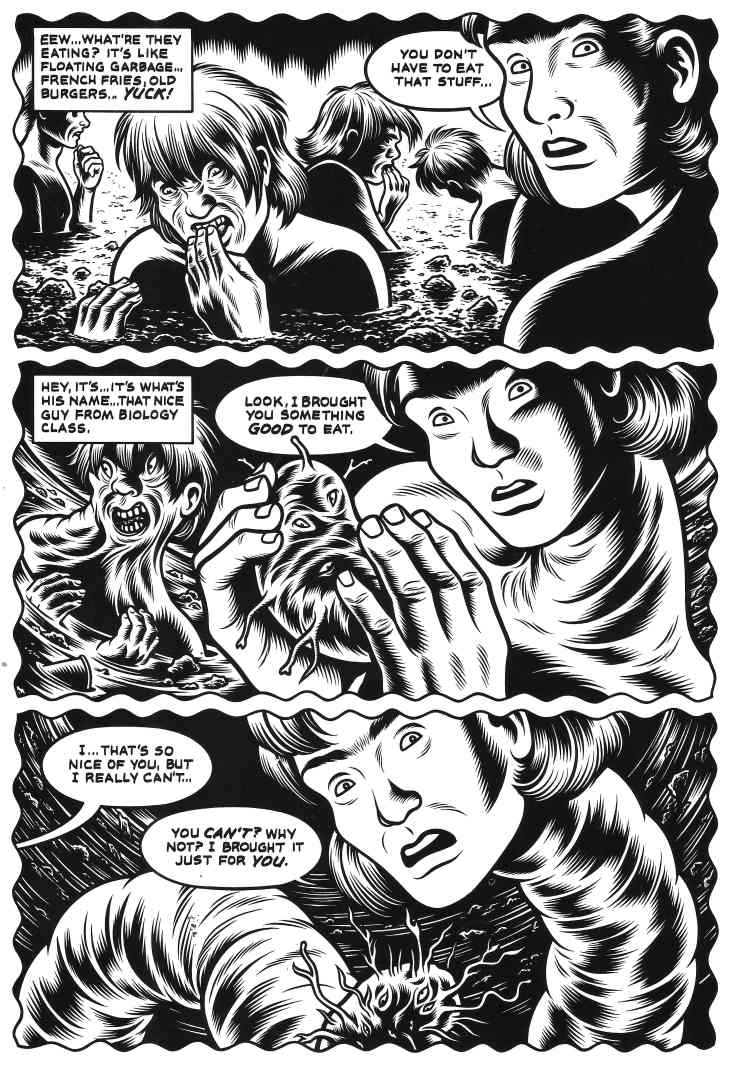 In real terms, Chris is infected with the bug. We will see in a moment just what her mutation is. She is living in the camp afraid of what her sexual contact with another might do. Keith was kind to her and she sees him as a white knight. Due to this she has a sexual attraction to him, looking for him to save her from the status the Bug has brought her to. All this is clear from this next sequence. 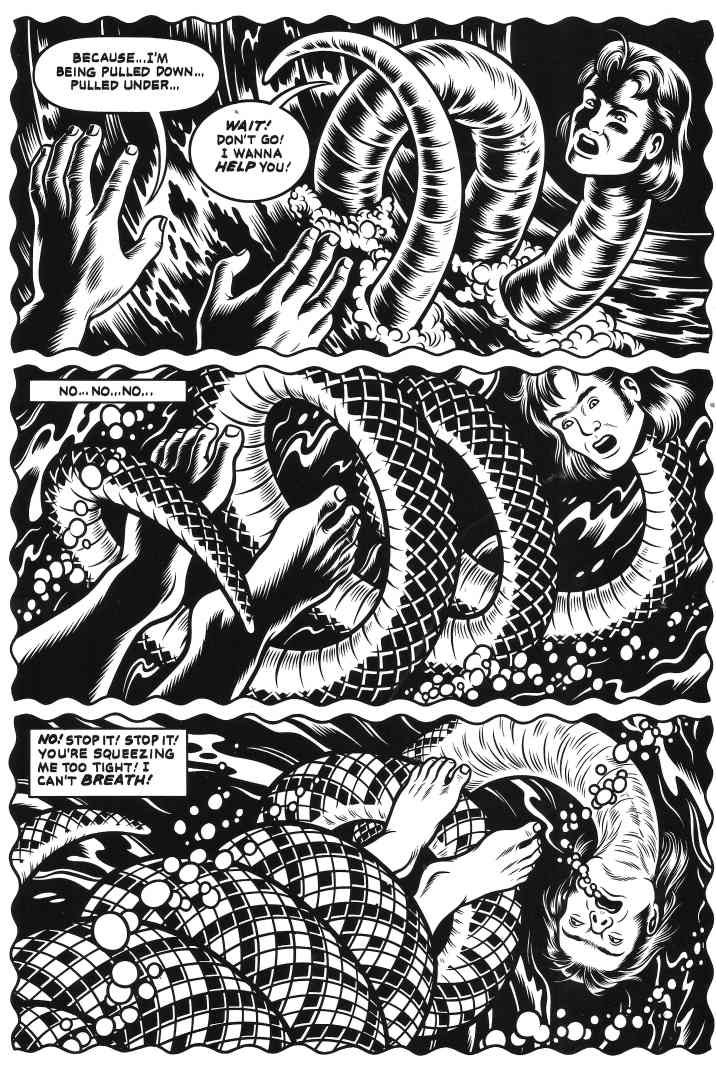 Keith is shown to be squeezing her when she awakens, an with that act, the skin splits along her back. She peels out of it… 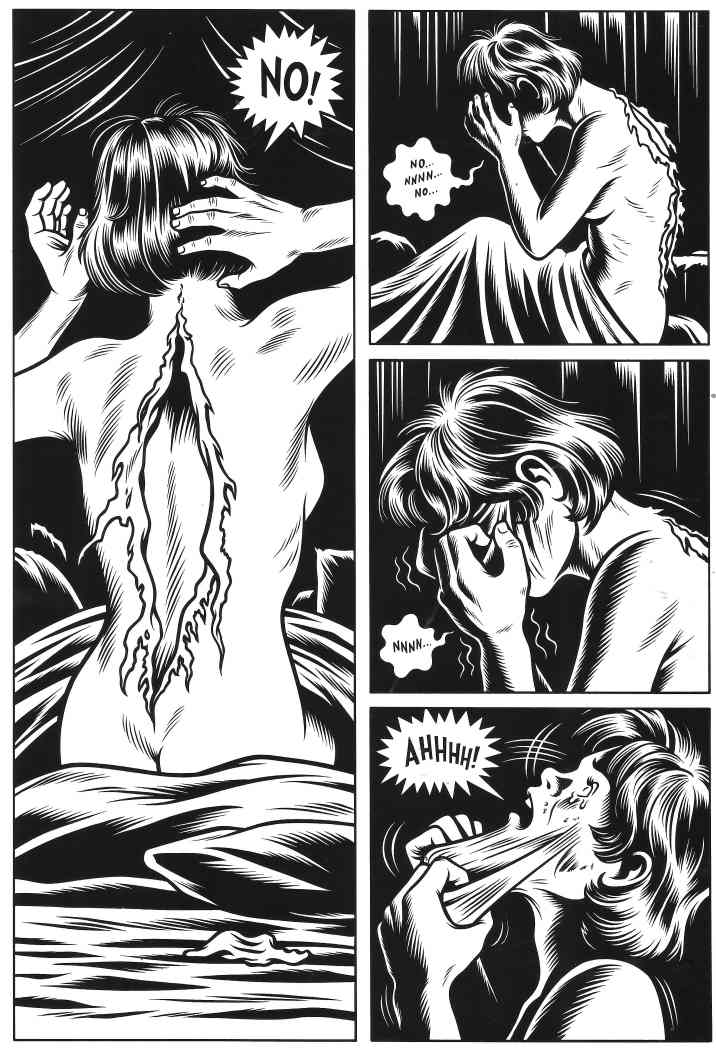 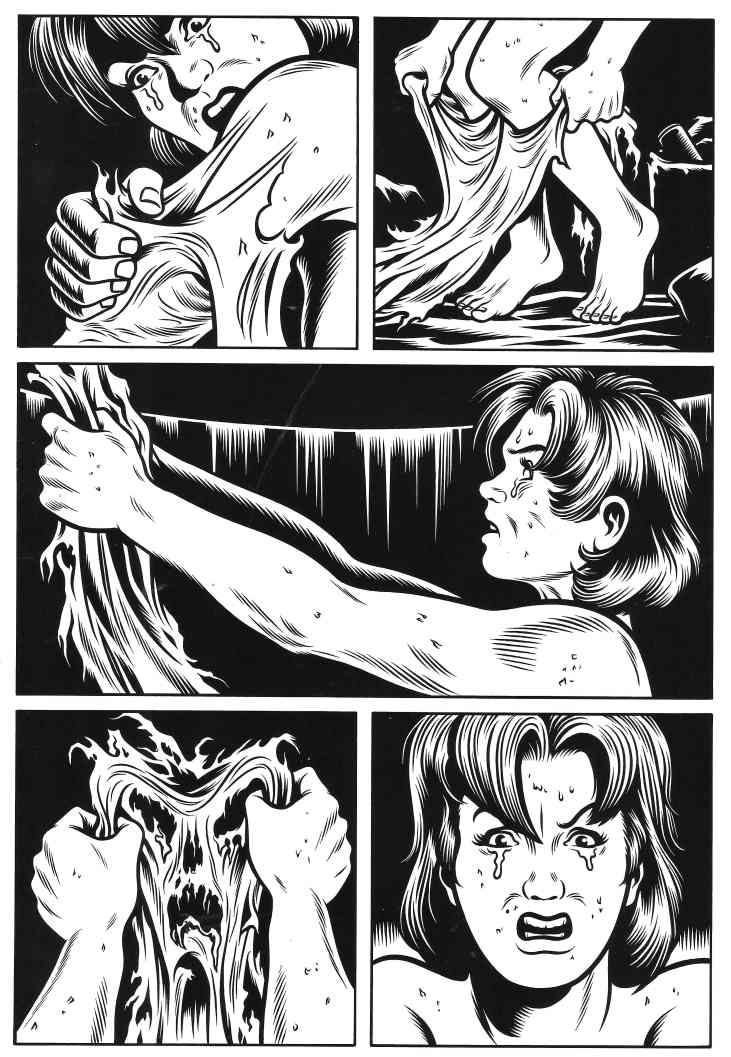 …and tearfully tossing it from her tent. 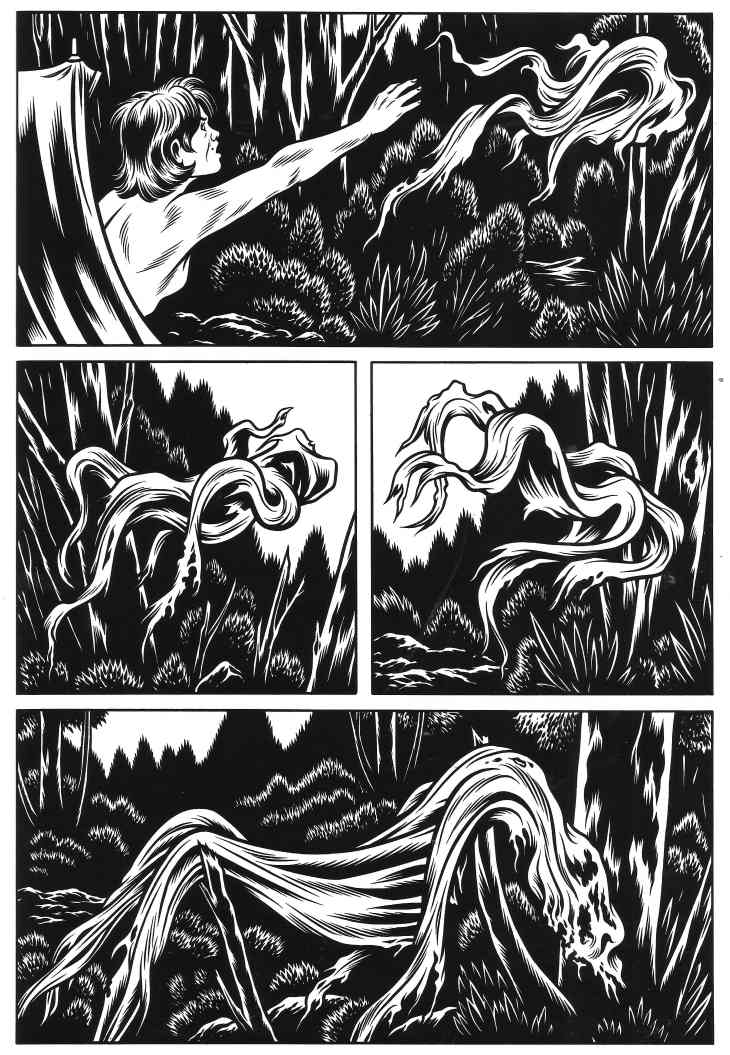 I’m going to have to buy this entire series. No bones about it. The resolution between Keith and Chris, how the Bug infected are treated by society after their peers grow up a little, so many questions I need answered.

Hopefully I’ve done a good job of getting you to join me.

If not, give this guy a try.

Posted by SonOfCthulhu at 2:44 AM