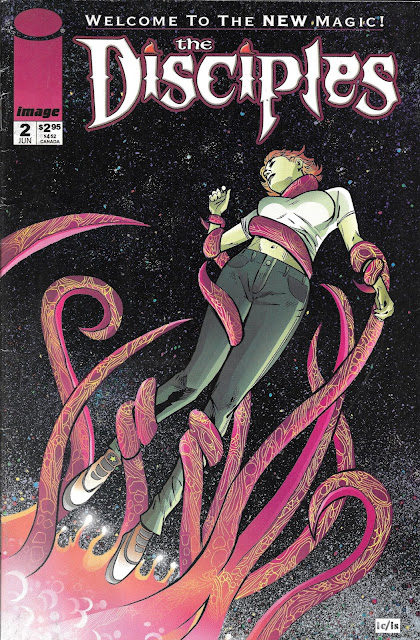 If it’s tentacles and Elder Gods, it must be Lovecraftian

Sad when you’re the also ran.

“The Disciples” has been used twice in the last 18 years for an independent comic book title. The first by the troop you see above who were apparently attempting to make an ongoing book of quirky sorcerers who dealt with other-worldly threats to our universe. The second came out of Black Mask Studios and Steve Niles, which made it a little higher on the remembrance list for most people.

This title has been all but forgotten. At least as far as my search engines are concerned.

Even Comic Vine stiffs this title in favor of Niles’ book when I run searches. That’s kind of a bad sign.

The shameful part is that the book itself isn’t bad. It’s the second half of a two-part story that is sparse on text and has an ending climatic battle that is all visceral artistry. Laurence Campbell (of various Marvel and other titles) gets a chance to strut his stuff and we are left a bit perplexed and unsettled. The back page of the book touted itself like the back of a hardbound novel, a unique feature back in the day. 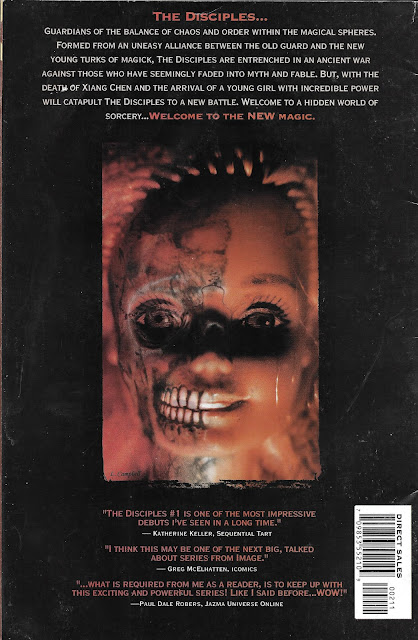 And the book comes with tentacled space gods, so it has pretty much got its meat hooks in me already.

The series itself has been collected into one trade which features all four issues, the two-part stories The Magician and Viva Las Vegas. If you like what you see here, the entire run could be had for very little green, even digitally.

Let’s dive right into this one and see if we can make any sense of things coming into the story so late. We begin in a dream… 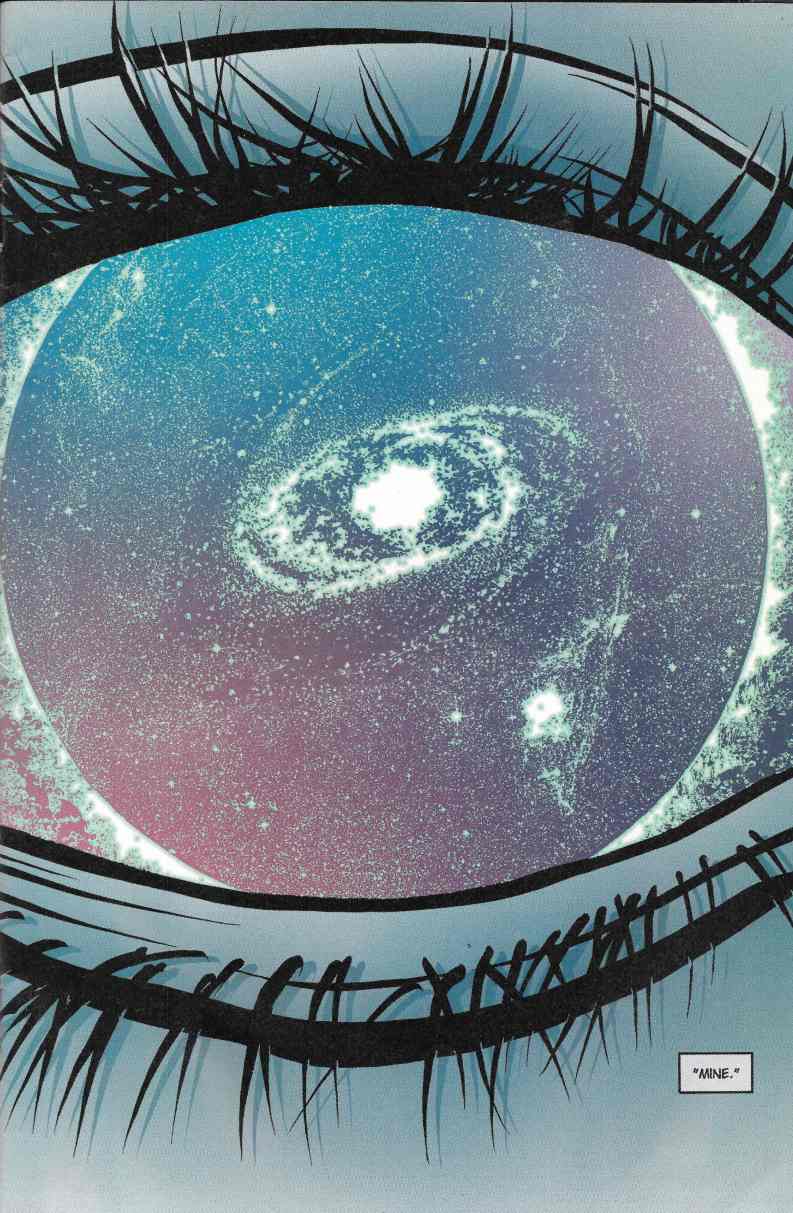 …apparently a dream that unspools like the end of “2001.” 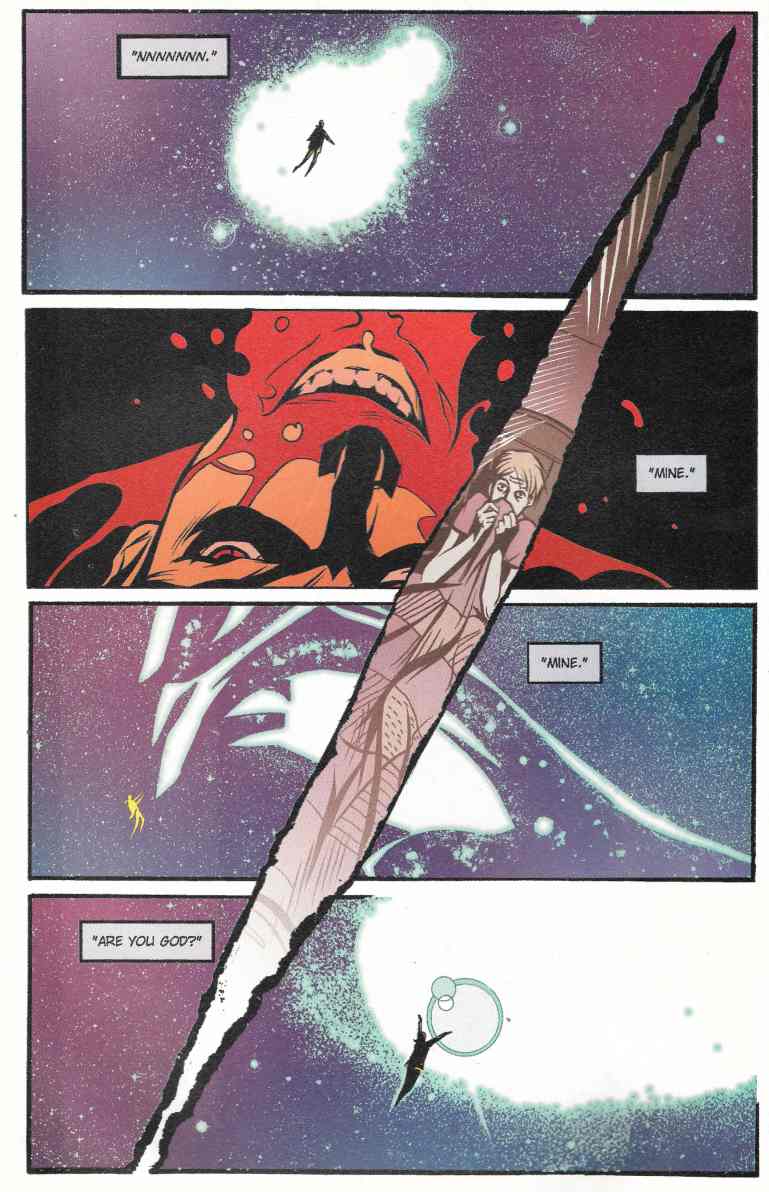 …only one of our new “Disciple” sorcerers is bearing witness to the incursion. 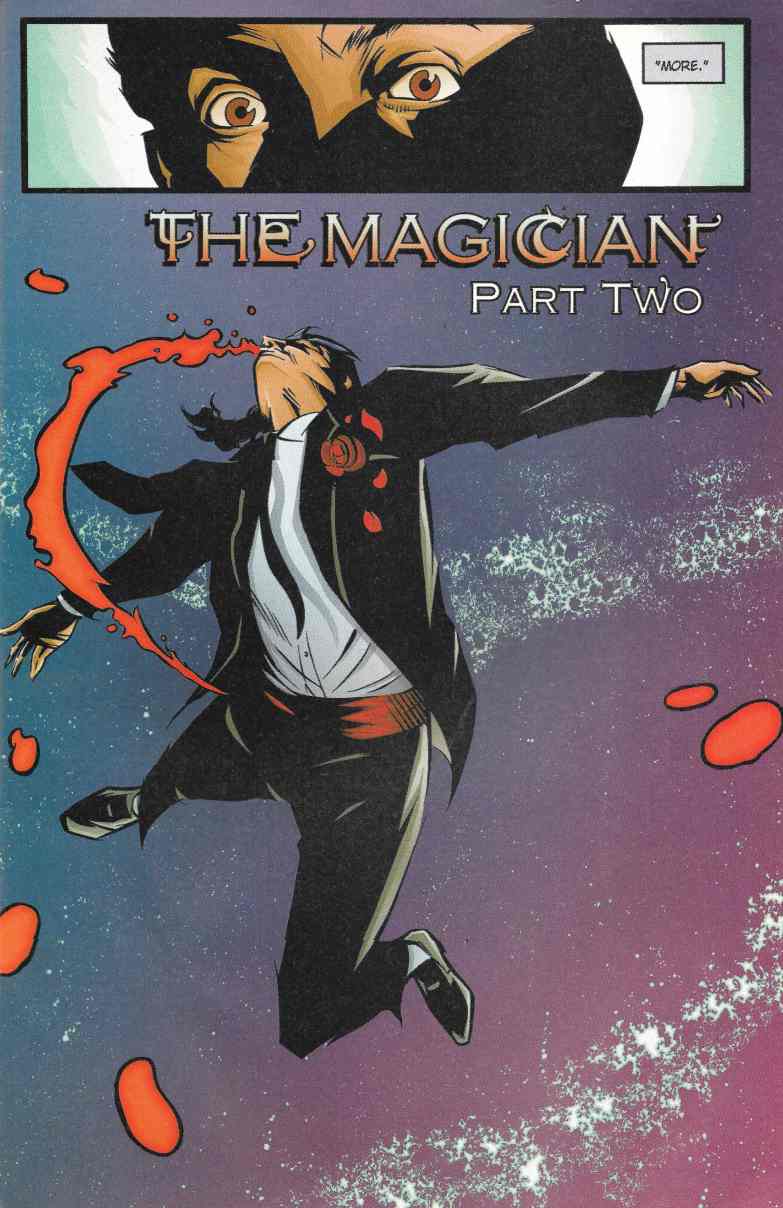 Okay, that’s some trippy, heady stuff. Pretty bold to open a book that way, as well. No character introduction, no setup…just here: have some head scratching, weird graphics that symbolize…a bad time for our universe. I’m digging the book’s balls at this point.

Problems with dreams is that they have to end. This one brings one of our Disciples named Myron out of a deep sleep and makes him lurch for the phone. He dials up another of our party named Charles and asks to speak to “Mother”. 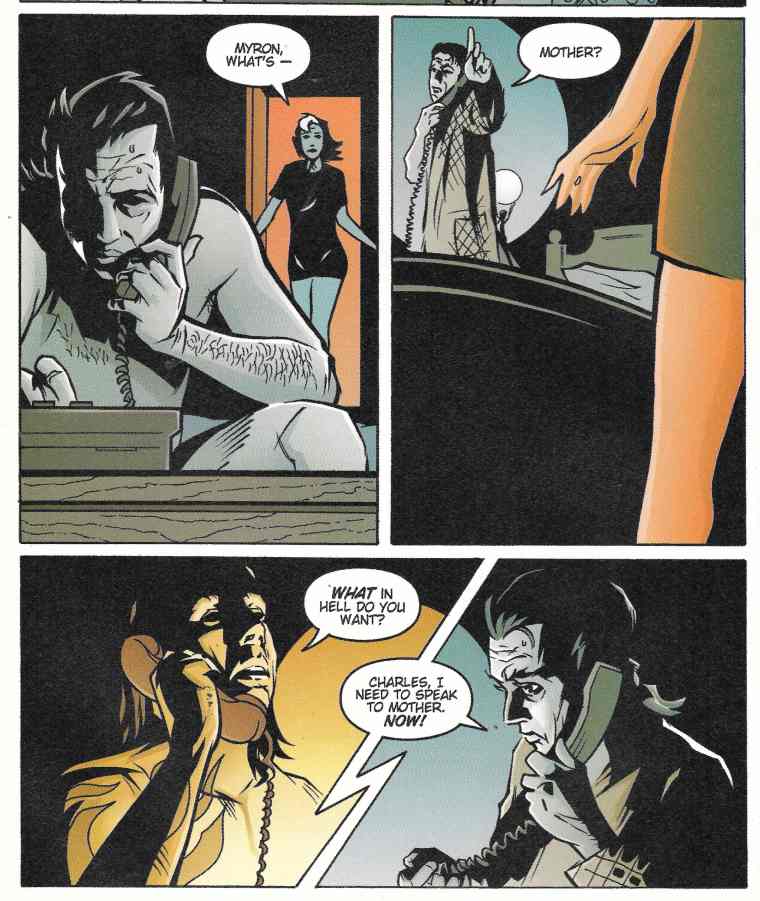 His request is denied.

There’s a bunch of good things so far about the layout and design of the story. The book has an intriguing vibe going for it. Like the fact that Myron doesn’t take this lying down, but gets dressed and prepares his girlfriend Ambrosia for what’s to come in a series of panels. Myron is our Magician, as in the title of our tale. I believe Ambrosia is not one of the Disciples. And that snowglobe will be extra important later.

As for the object of their search? Suzi is the young lady that is attracting the attention of the Elder Gods. And, why here she is being menaced by the toys in her room. First, her Etch-a-sketch: 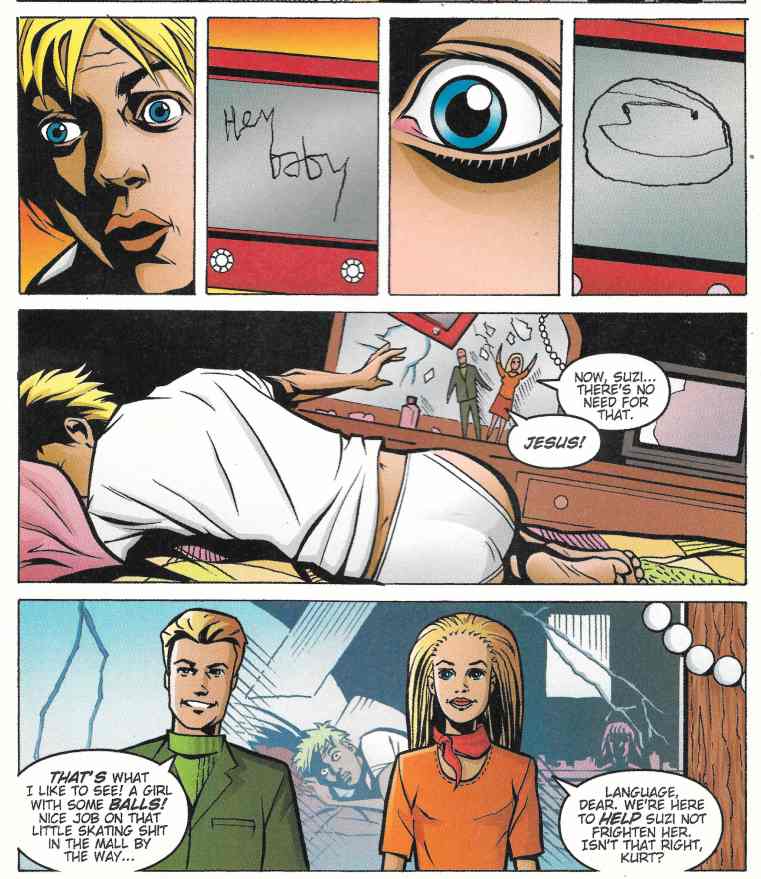 The Ken and Barbie stands-ins don’t bother me as much as this next bit where her poster of Kurt Cobain comes to life. It says stuff like “if I had the right help, I would have lived to make another album” which hurts some raw nerves inside me.

And speaking of “inside,” that’s what this entity wants: to be inside Suzi. And it’s not above just forcing its way in there. 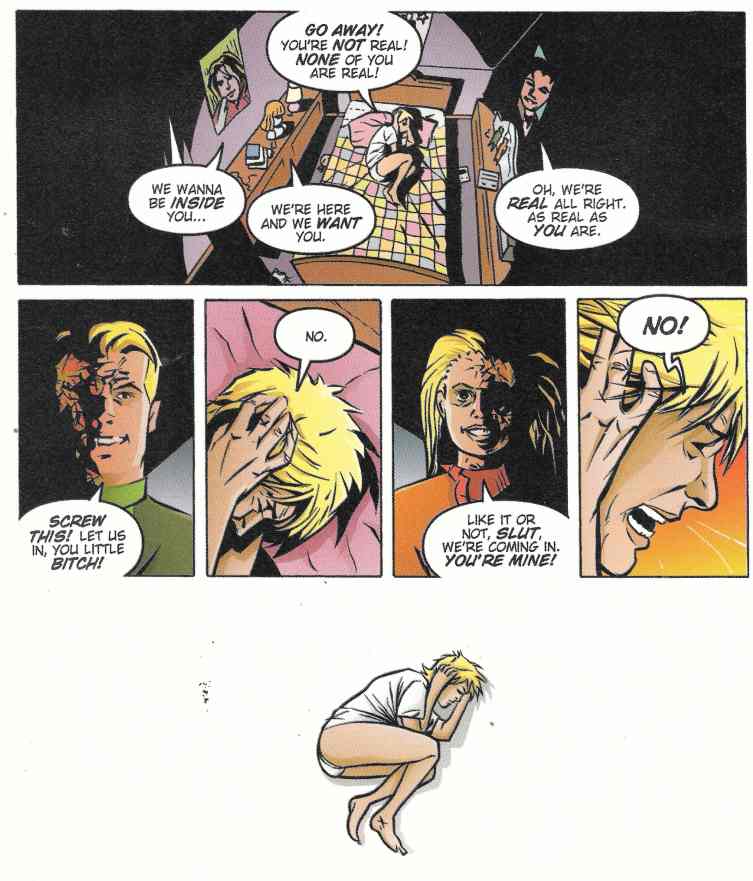 Book knows how to set a pretty creepy scene, know what I’m saying?

Meanwhile Myron is driving Ambrosia toward something that he is empathically feeling, but doesn’t know what it is. He senses there is some kind of magical fear building up in the world. There have been bombings and the loss of a Disciple in Hong Kong. Ambrosia thinks he’s acting ridiculous because he’s “just a stage magician.”

And there is a shadowy cabal of masked cultists who’ve been causing the rising fear in the world for their own nefarious end because of course there is. Appears they want Suzi. Or rather, they want the thing that will soon inhabit Suzi. 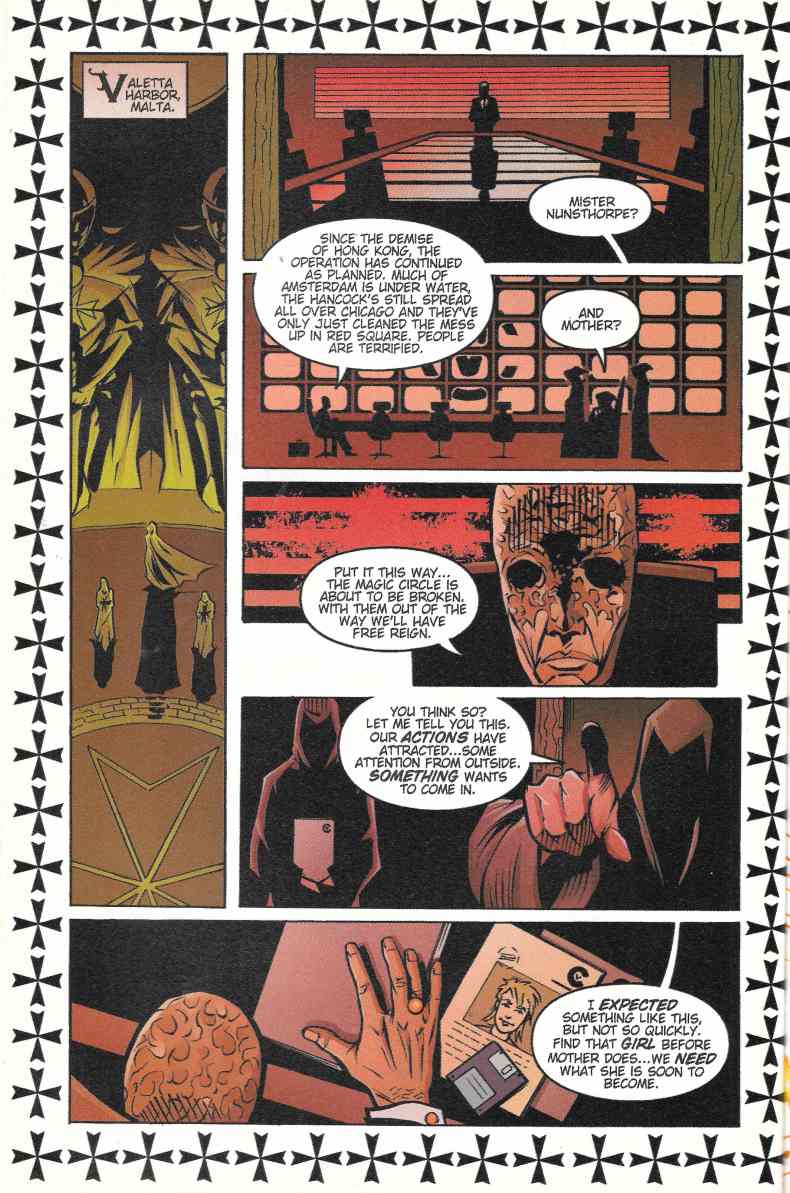 And speaking of Suzi, her parents are mighty upset that she broke the mirror in her room. So much so that they are riding her butt for three panels. Then Suzi, or the power that is slowly getting inside Suzi, acts out in a violent… 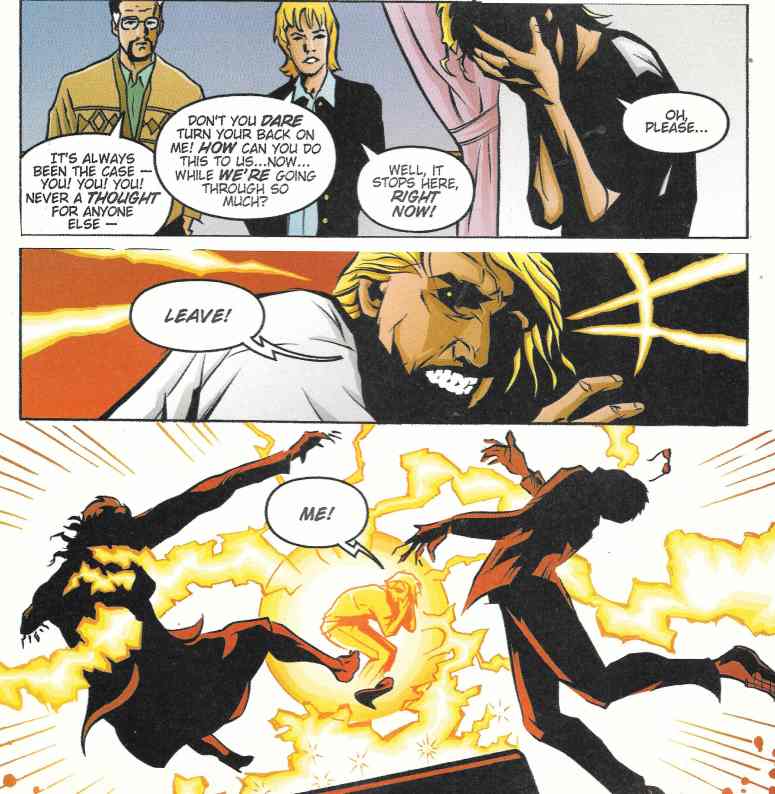 …and quite lethal manner. 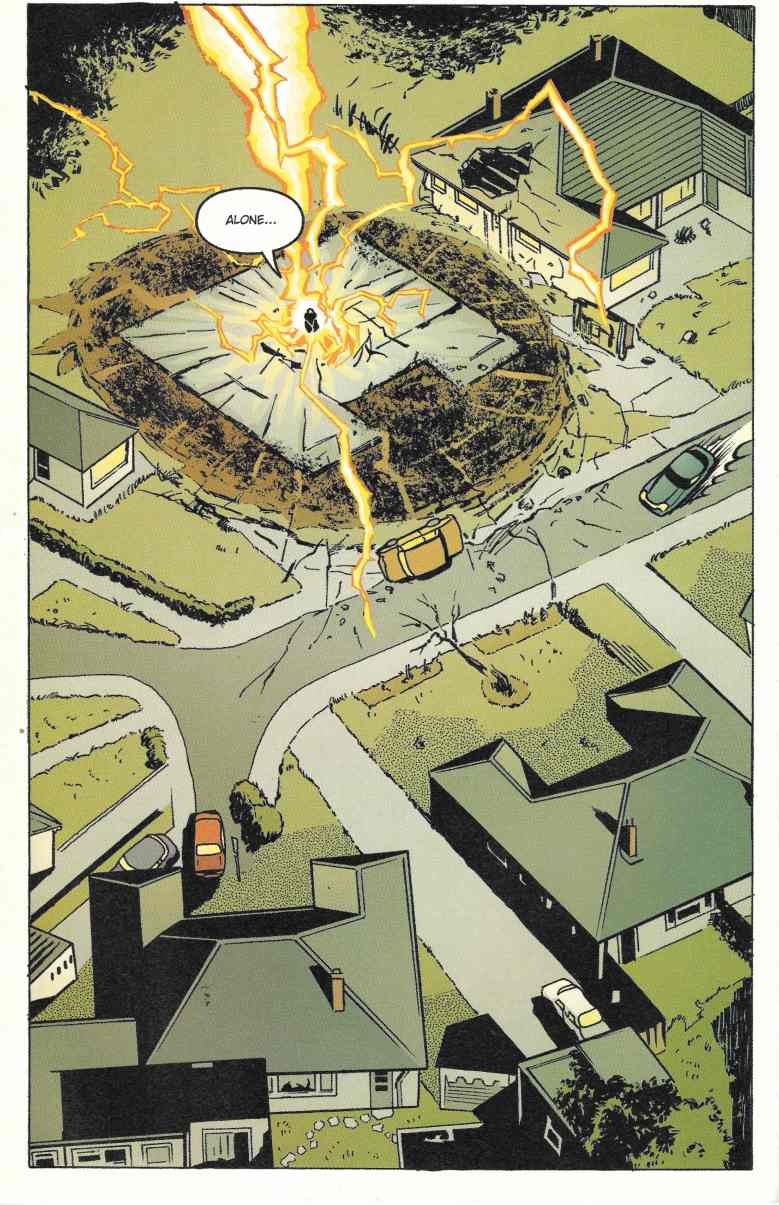 Well, there goes the neighborhood!

Myron and Ambrosia pull up. Ambrosia makes the wrong move here and goes to help Suzi… 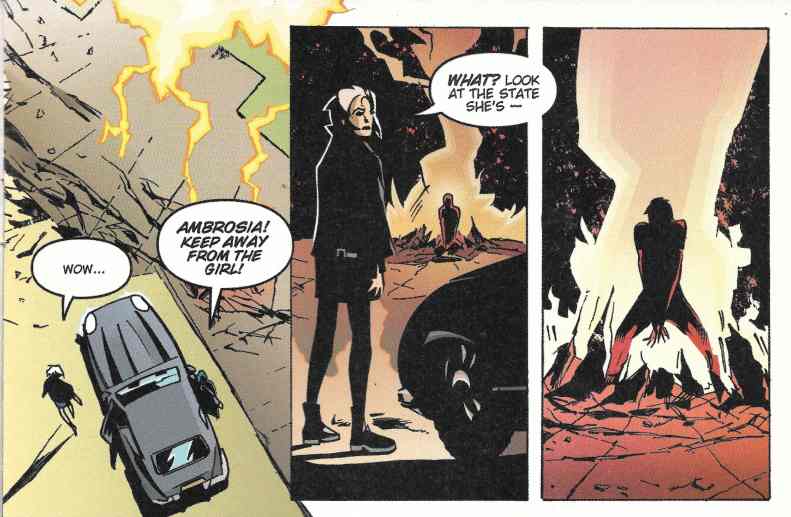 …but it appears she doesn’t want an assist at the moment. She or whatever is inside her. 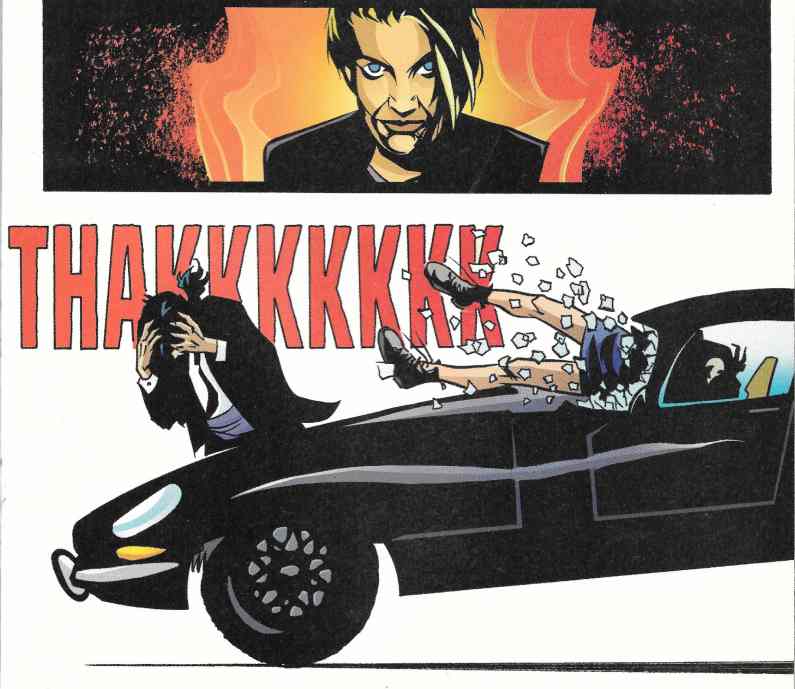 That knocks Ambrosia for a loop, as she takes a seat in the car the hard way, the wind knocked out of her. Myron gives it a try next. His efforts bear a very different kind of fruit… 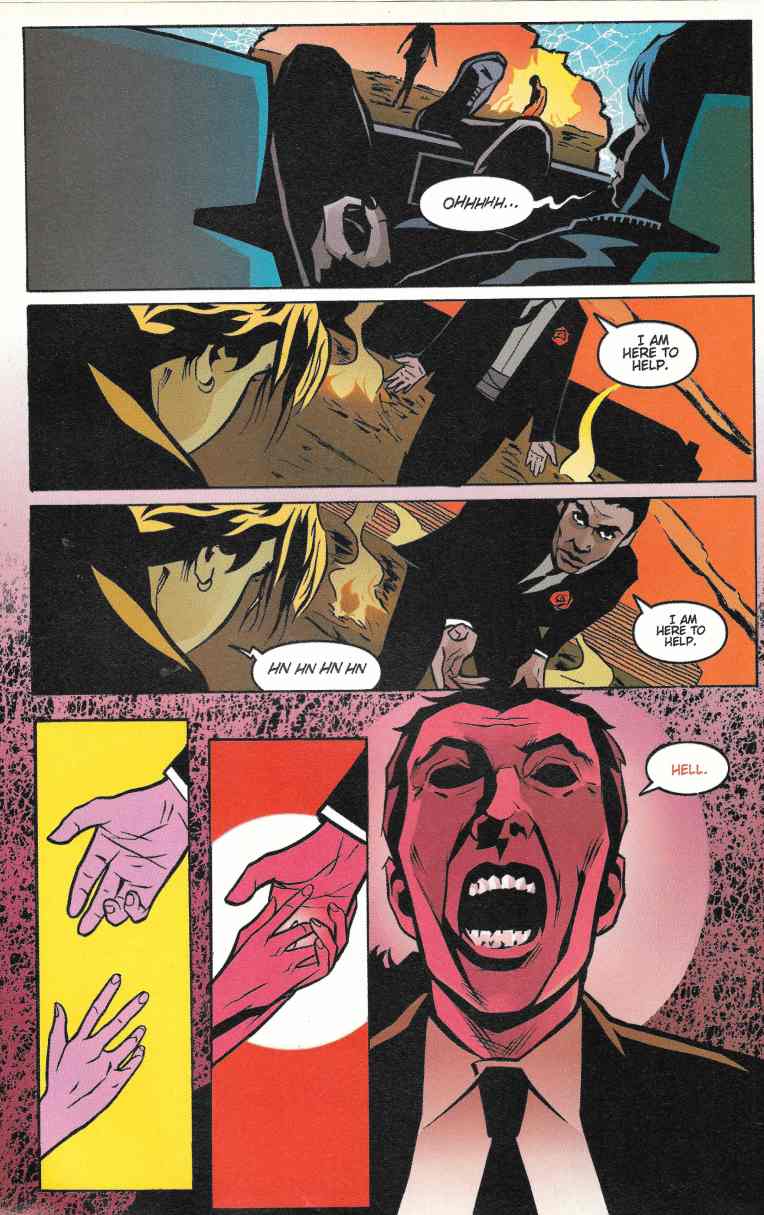 The entity has complete control of Suzi and it quickly explains to Myron his place in the new order of the universe. The effects look like they would shatter a person’s mind. 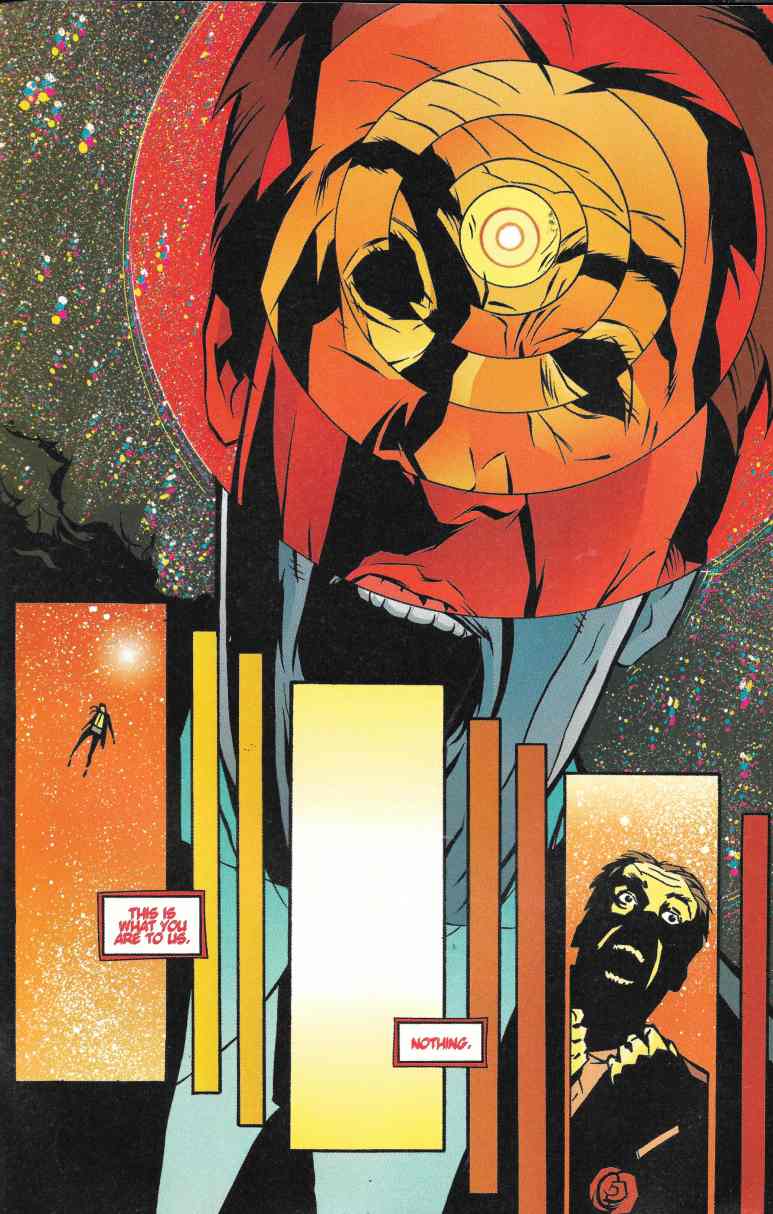 However, while the entity is keen on dismissing Myron or all humanity, it believes Suzi is the most important thing ever. She is the key to gaining a foothold in our dimension. At this point, the still reeling Myron makes a calculated decision. 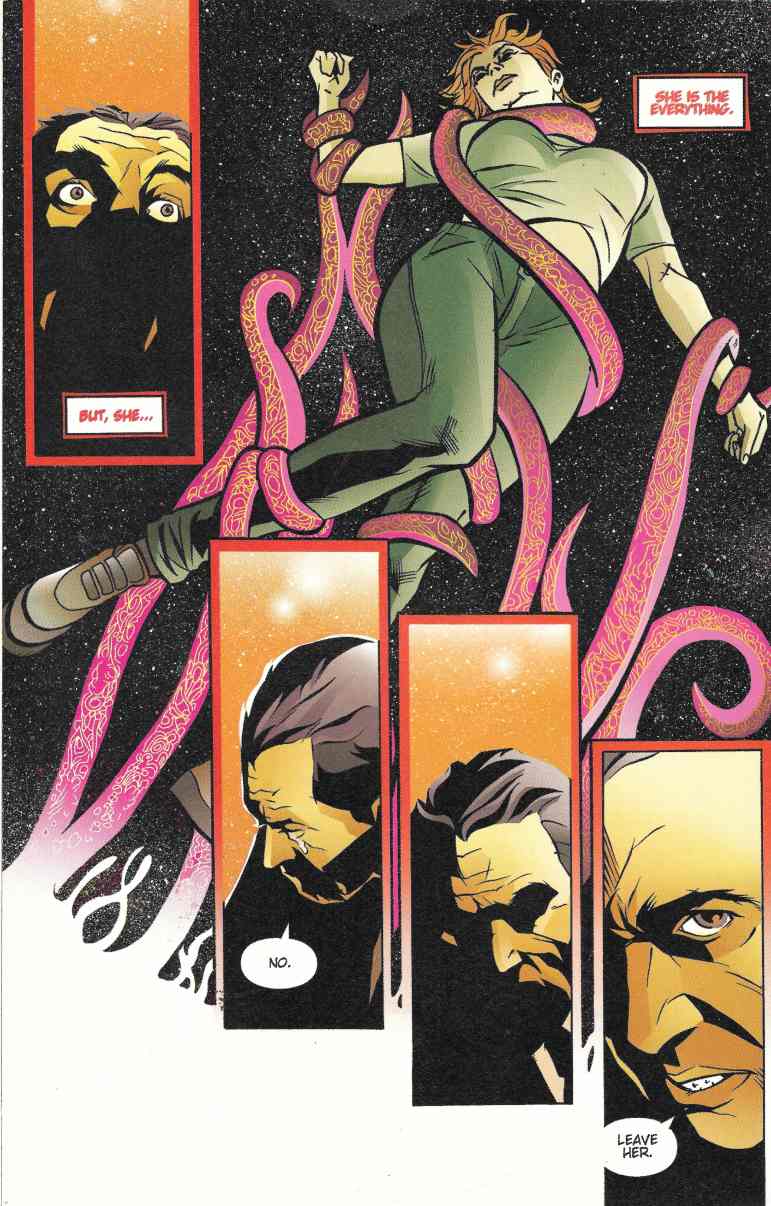 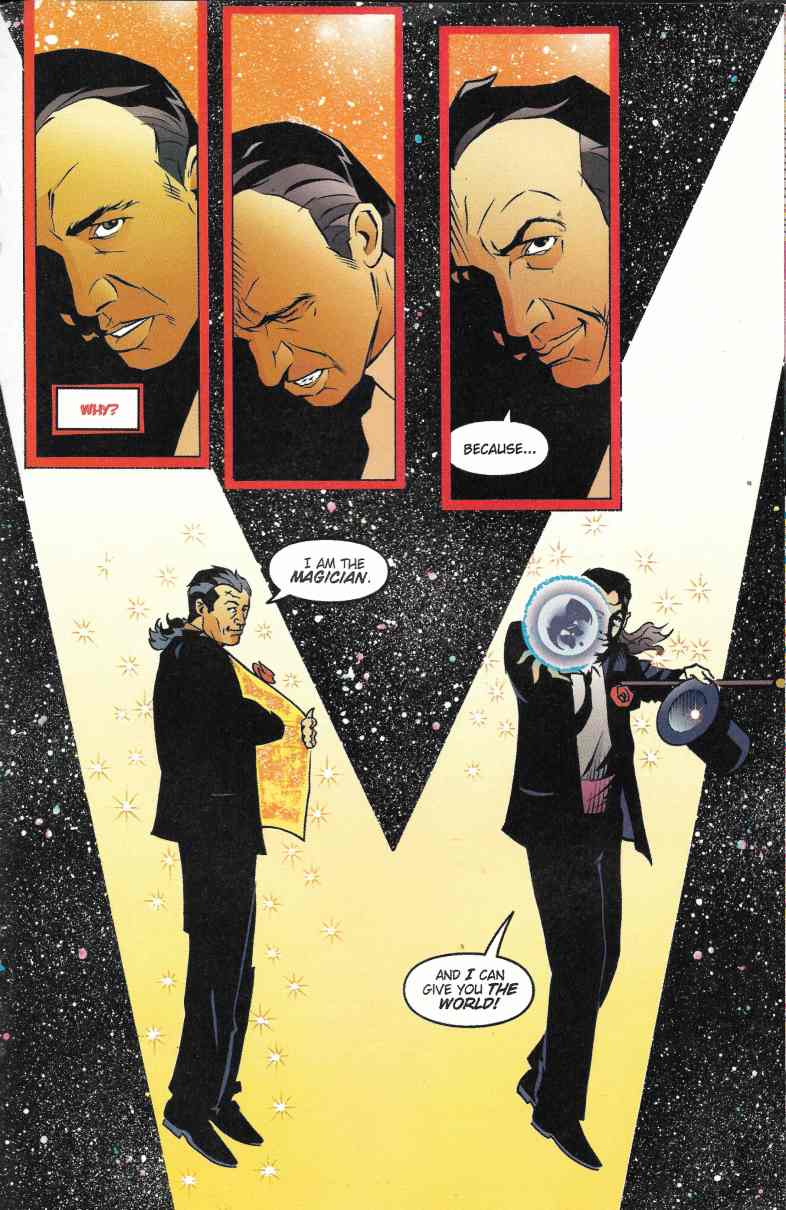 …and into himself, using his magic to lure it away. His bait works. The creature releases Suzi and the engulfs him. 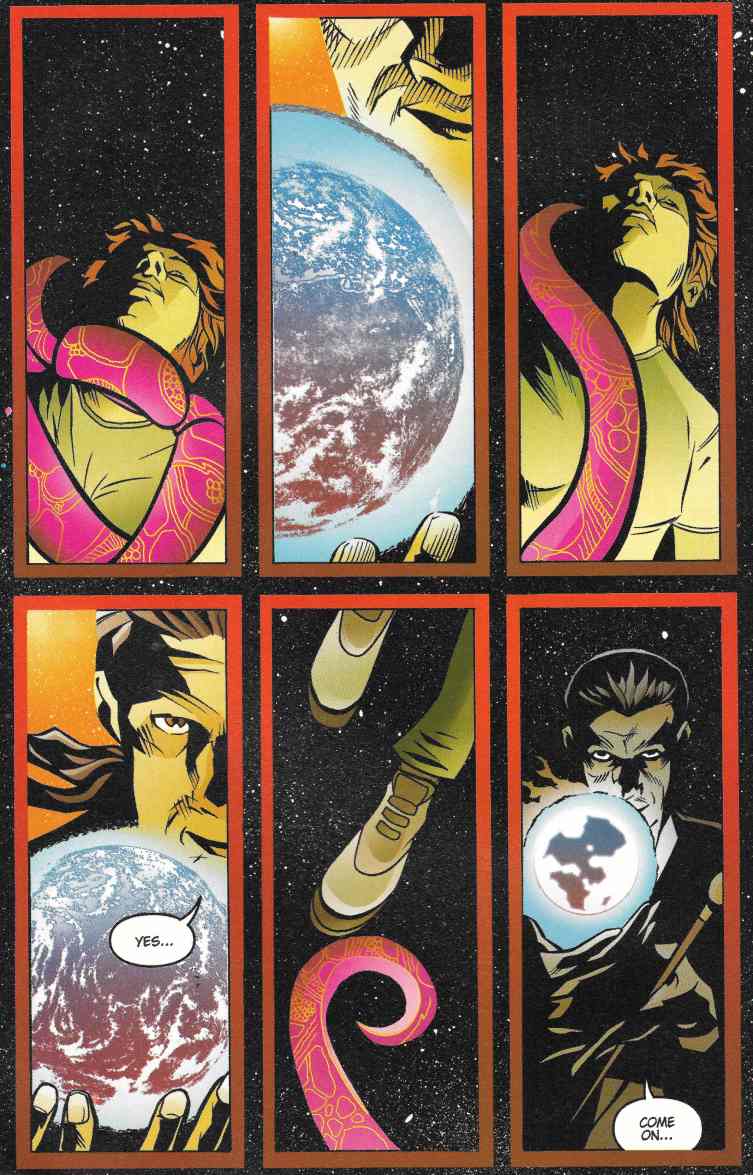 For my Call of Cthuhlu role players out there, note: I do NOT recommend this tactic for your gaming sessions. Mainly because you will possibly end up like this: 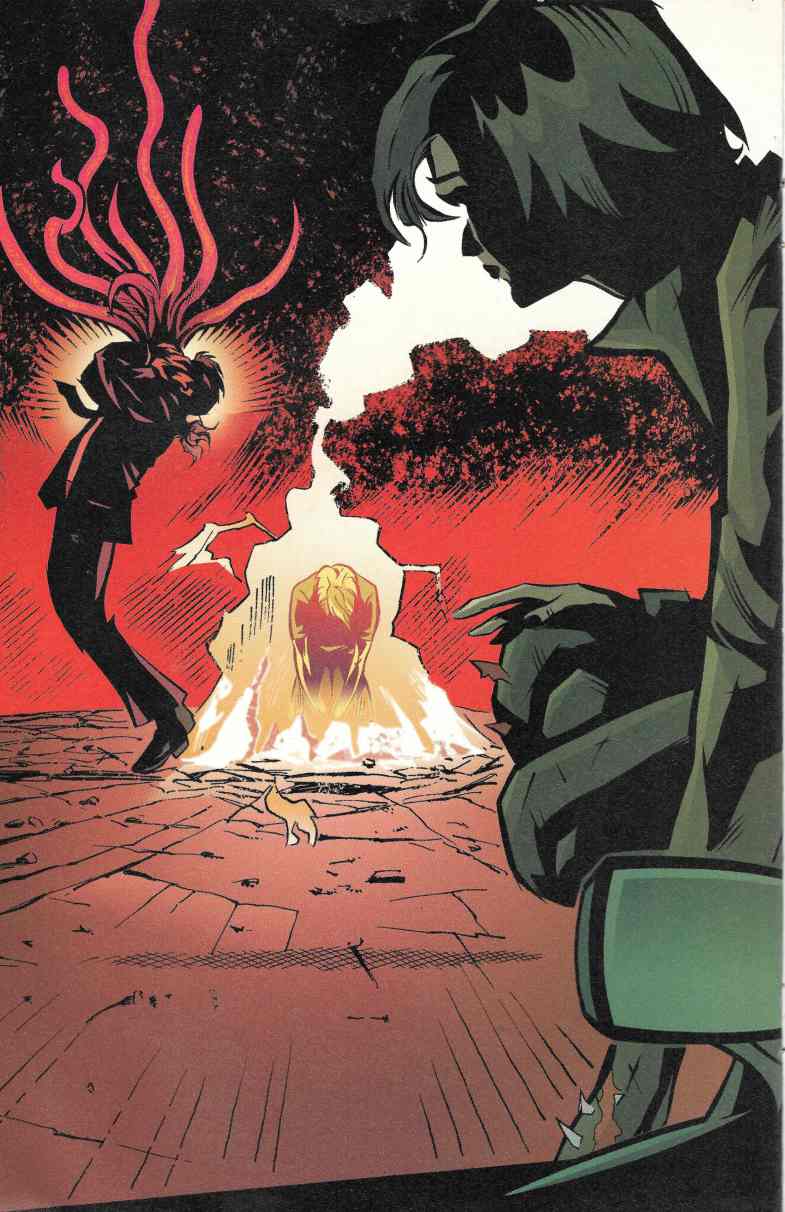 As luck would have it, Ambrosia is awake and knows exactly what Myron is expecting her to do. 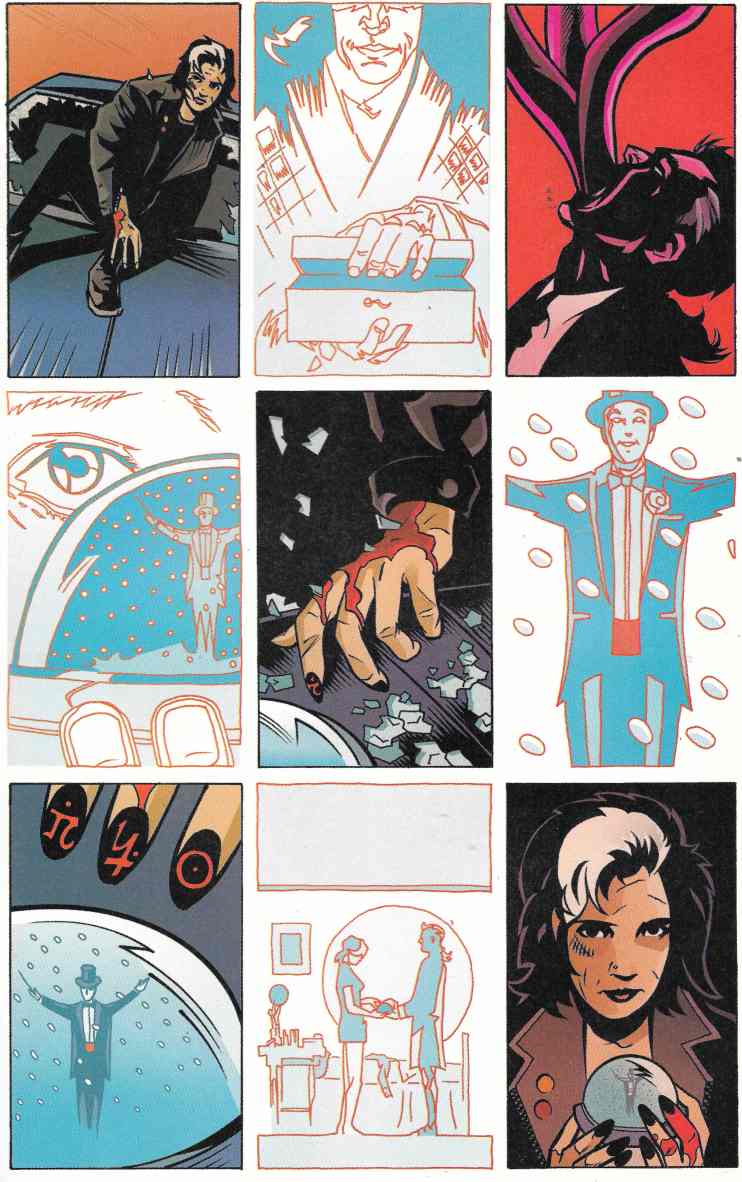 She tosses the snowglobe like it’s a hand-grenade, and to prove it is playing attention, the thing detonates like one as well. 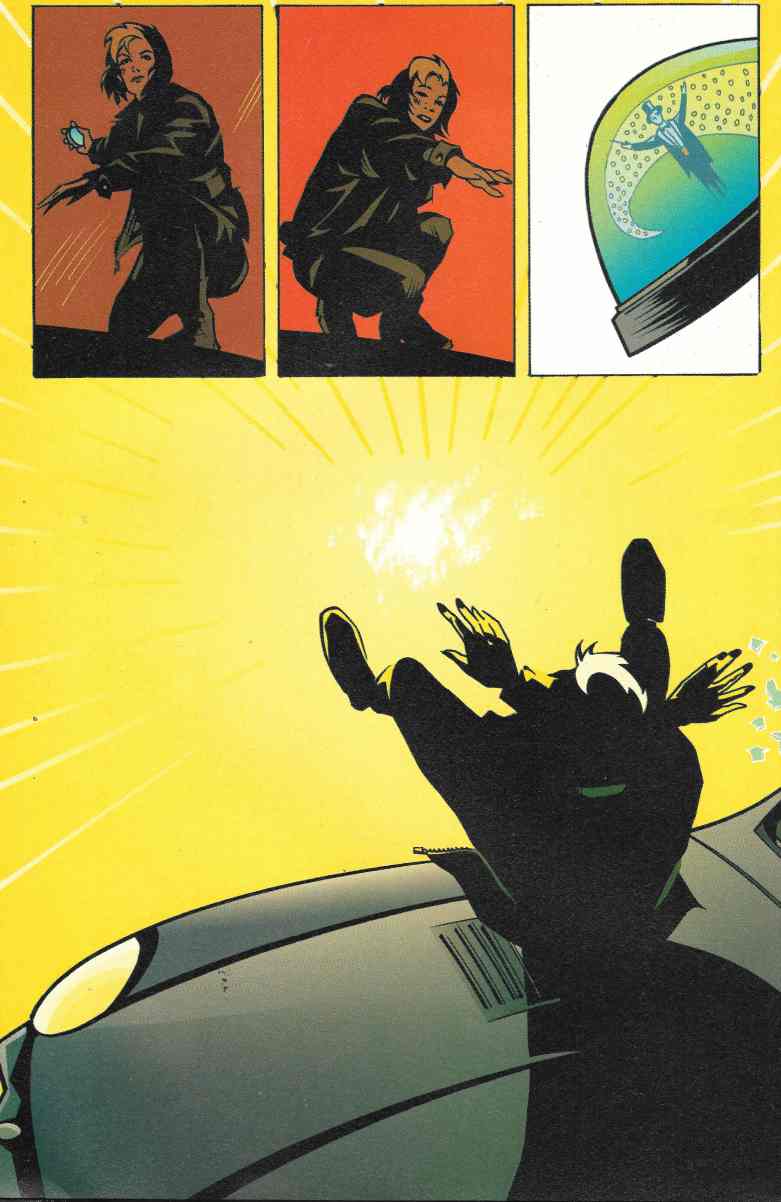 She then helps Suzi to the car and takes off with her, while one of our masked men from Malta shows up only to leave empty-handed. In the end we are left with a bit of confusion, but I think I get it. She takes Suzi to Charles’ house. The fact that Charles looks a bit like Myron is confusing, but I believe Myron sacrificed himself for Suzi and the universe. Still if these two looked a bit different it would make the ending easier to interpret. 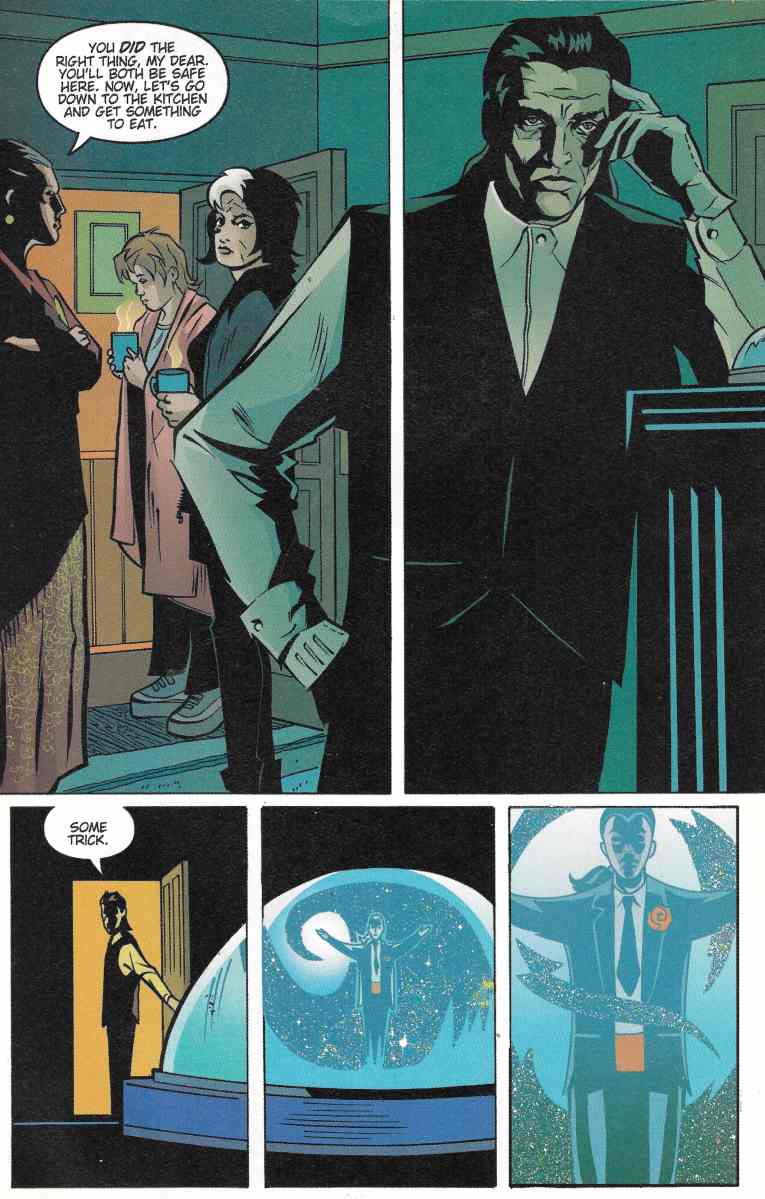 And this is the end, fade out on snowglobe.

Kinda sad about that. The book is a quick read, but the emotional punch of some of the scenes make it worthwhile in my opinion. I don’t think it is everyone’s bag, but if you like evil cults, Call of Cthulhu-type adventures, or just some trippy, heady graphics, I would suggest you pick these up. Only four issues, so even in trade they should be cheap-cheap.
Posted by SonOfCthulhu at 5:41 AM