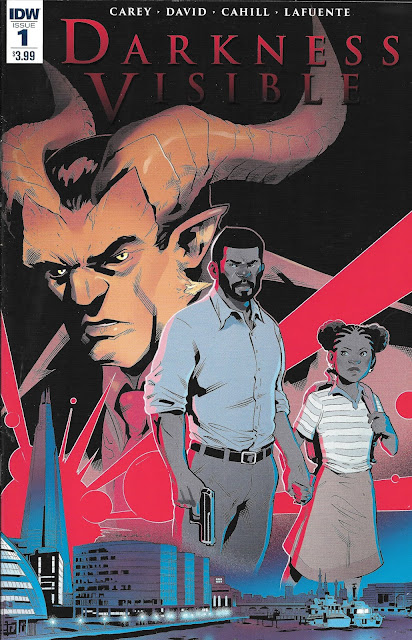 Feels like the start of a buddy cop movie

Whenever there comes up a buddy cop story with science fiction or fantasy overtones, I always harken back to the one that got all of the tick boxes checked. That would be 1988’s Alien Nation. The mix of alien and human cultures presented were handled much more maturely and intelligently than say Netflix’s slapdash “Bright” movie. It is the high bar for me.

And Darkness Visible meets that bar. Or at least it does in this first issue. Our setup here is that Demons have arrived on Earth (method unknown as of this issue) around WWII  timeframe and they have melded into society. They have their own culture and belief systems, much of which has resulted in an uneasy truce between them and us. However there appears to be a growing faction of terrorist devils who want the status quo changed.

It’s an interesting premise that in lesser hands might immediately fall apart, but Mike Carey and Arvind Ethan David do well with the concept. So well that last November the six-issue property was optioned for a TV series although as yet nothing has been released almost a year later. It’s a solid concept, better by far than Bright . The chance to show this off in another medium for this story would be welcome.

Time to get moving on the issue review so you can see if you side with me on this one. We begin in London on High Street at a bar frequented by the strange beings who have made our world their new home. Two devils arranged a meeting here that will have great import to our story. The place is called, ironically, The Angel… 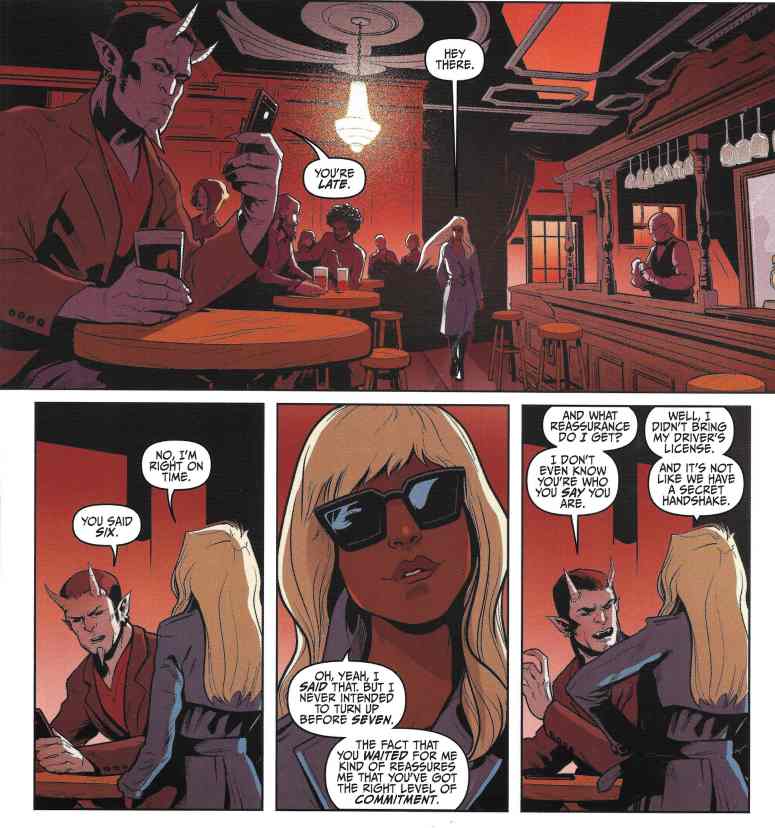 Our information courier appears to be challenged by the demon waiting for her. So she reveals her true form and…Yuck!...convinces him. Their conversation drops hints at a mystery the audience will need to pay attention to: there is something portable at a location that a group of devils will want. A MacGuffin, if you will allow me to use the term, and something powerful from the sounds of it. 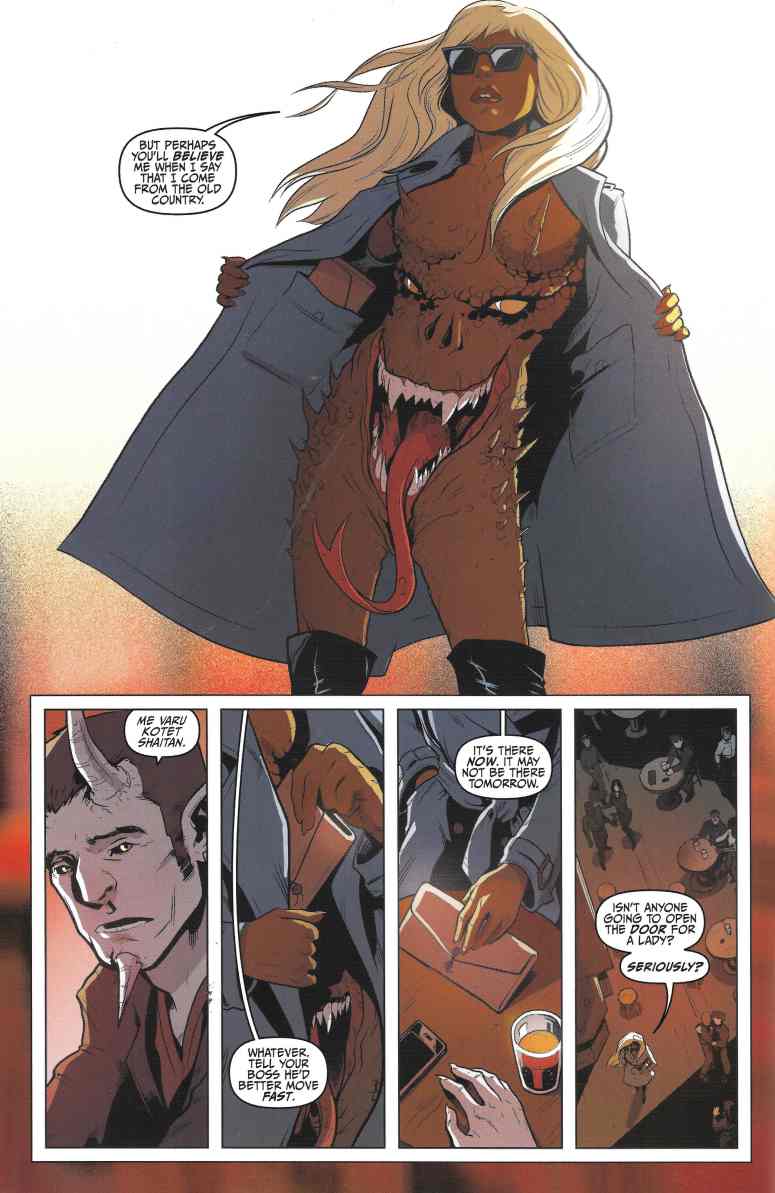 From her exit we move on to set the stage for our protagonist. He’s a detective assigned to the special devil crimes task force who is also a single father. We meet him on the heels of his daughter performing in The Merchant of Venice in her middle school, which means the author is using this as a way to shoehorn in “The quality of mercy is not strain’d…” speech, because no way are seventh graders the ideal performers of this Shakespearean tragedy. But it does give some context into what Daniel “Danny” Aston will soon be dealing with on an emotional level. 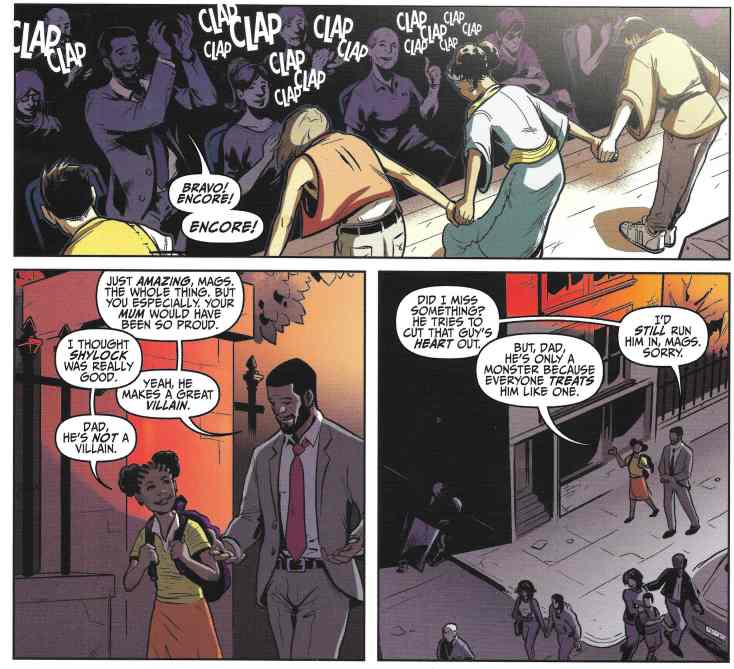 Likewise this bit from “Mags” where she puts forth that Shylock is only a villain because everyone treats him like a villain, a sure sign that we will be meeting some kind of devil whose actions appear evil, but only if you don’t view them from the right perspective.

It won’t be this demon-bum with roach arms… 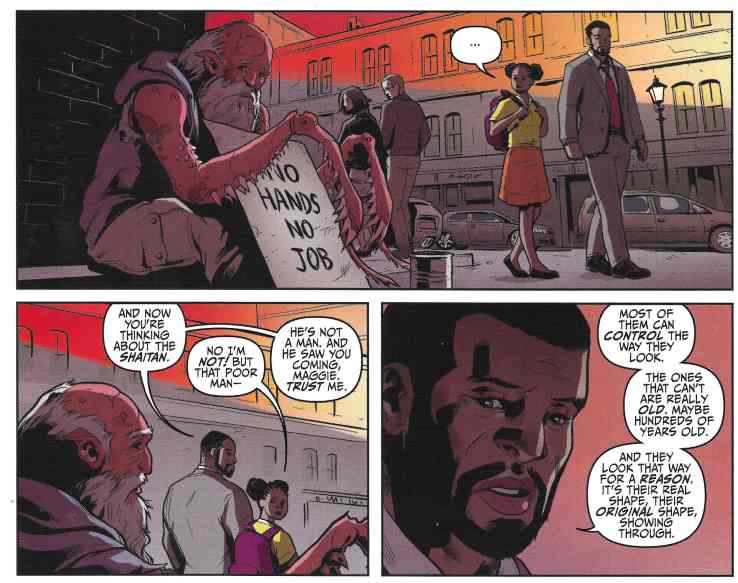 …but it does give Danny a chance to do a little informing about the world we are walking through, in such a way that the exposition dumps seem natural. Either that or I am just very curious about how devils and humans live side-by-side… 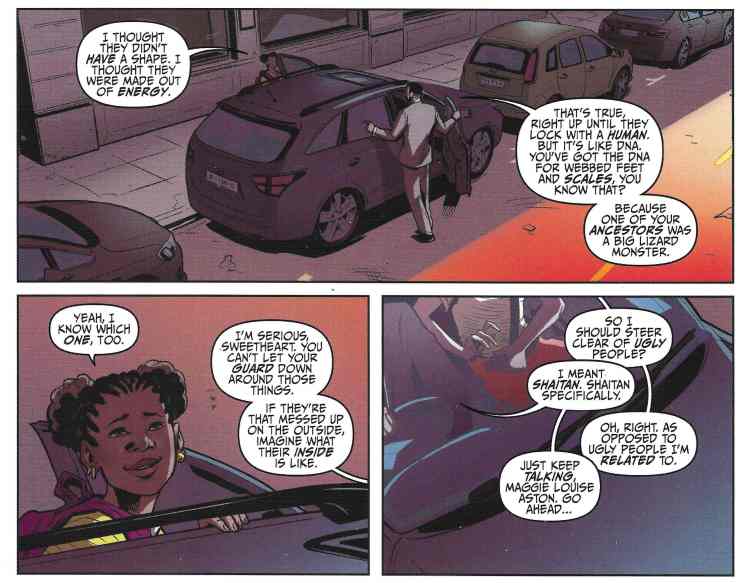 Let’s break down what this part tells us. There are two types of devils: ones that can control their looks and ones that can’t. The ones that can’t, like our woman with a face where a va-jay-jay should be, are very old.

However, Mags brings up that these are energy creatures that “lock” with humans, only then taking on a true shape. Which sounds like a the demons can have a parasitic or symbiotic relationship when it suits them. I sure hope I’m getting this right, but all of it sounds pretty intriguing. Why would someone make a literal deal with a devil?

And at that moment we end up with a half-dozen devils, including one huge fella who appears to be the leader, acting on the information we saw supplied in the opening pages. They reach a downtown office building just as Danny’s voiceover warns that if you turn your back on a demon, you’ve only yourself to blame for the results. 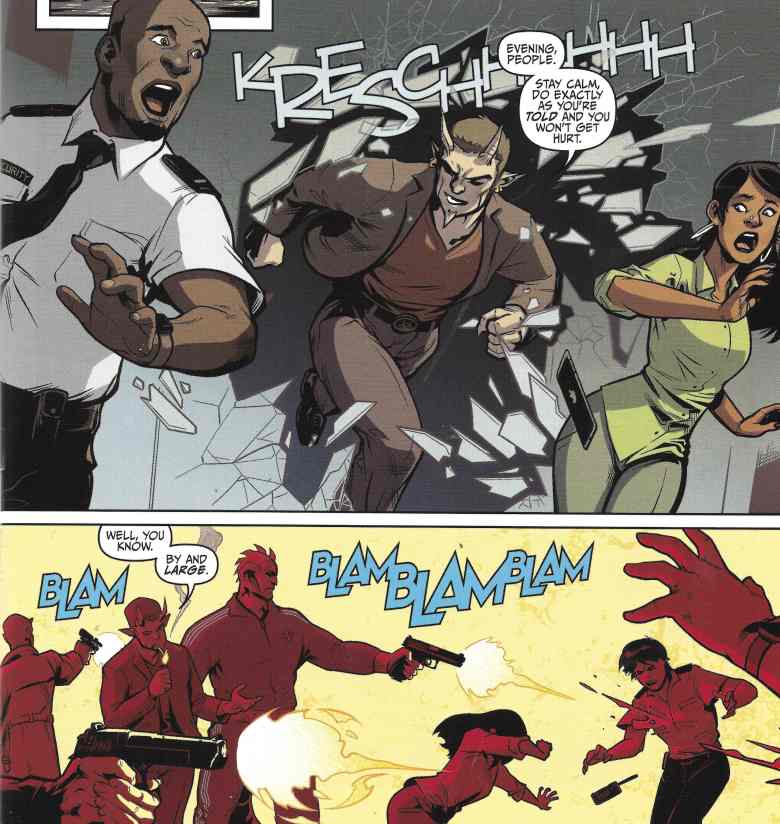 These people certainly aren’t to blame, however. And the results are just as ugly. This is Rhak and the obvious boss, Mr. U. 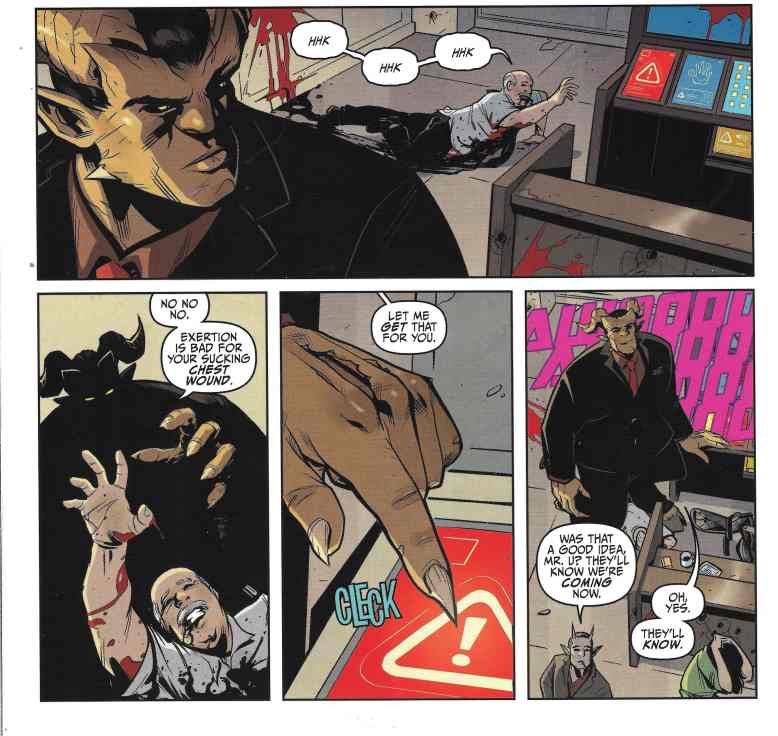 Mr. U. is a pretty cold customer and his actions here are an enigma. The Crapbox is truly a curse in that I don’t know what the endgame of this death and destruction was, and I very much want to know what was at stake for all this. This has a Die Hard-bad guy level of planning to it and I’d really like to understand what the payoff was of sounding the alarm and shooting all the people was.

Aside from the devils just being evil fuckers, I mean. I get that could totally be it in a nutshell. But the writers are clearly throwing me stuff to counter that with Mags and Danny. I got one issue of this, folks. Lot of speculation and little payoff.

Let’s shift back to Danny for a bit. He is going over some answers to my prior question: what do people get out linking up with a demon? 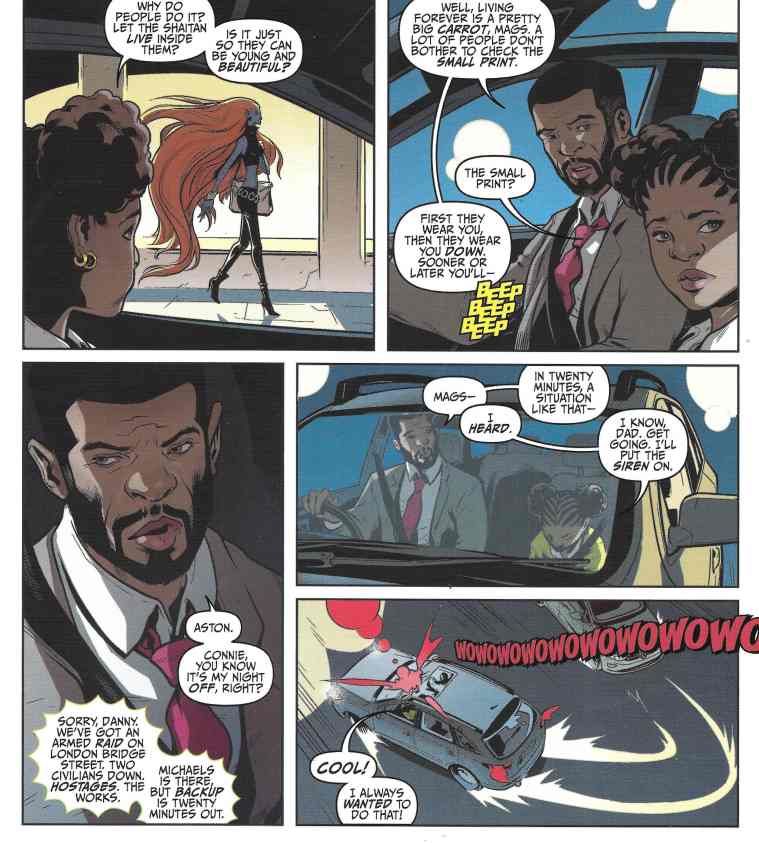 Eternal youth and beauty…until the demon destroys who you are and then you are an ugly horn monster. Got it. Also looks like Danny has caught that call with Mr. U and Rhak raising a ruckus. For the record, I’m against this “bring your daughter to work day” spur of the moment thought. Things look to get a little rough.

Mr. U starts apologizing to the hostages, first for the inconvenience and second for the inevitable loss of life that will occur. Then he has the underlings bring him the manager of this …bank? Not real sure what we are in. 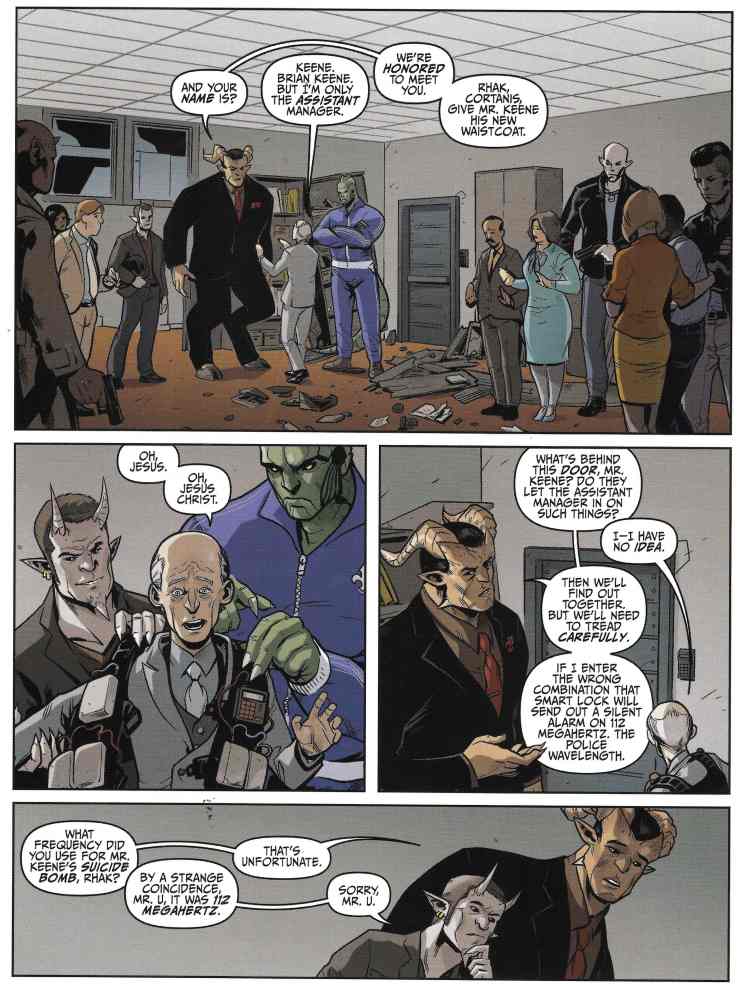 This but of careful mind screwing seems like such petty torments, but really cements who these devils are in our heads. They are like nature’s ultimate dicks. Like the guy that won’t turn on his lights in the pitch-dark pouring rain just because it is barely noon. That’s who these devils remind me of. Assholes.

They start randomly punching in series of numbers, beginning with Mr. U’s birthday all under the watchful and scared shitless eyes of the manager. Which is too much for this other employee who somehow knows the code. 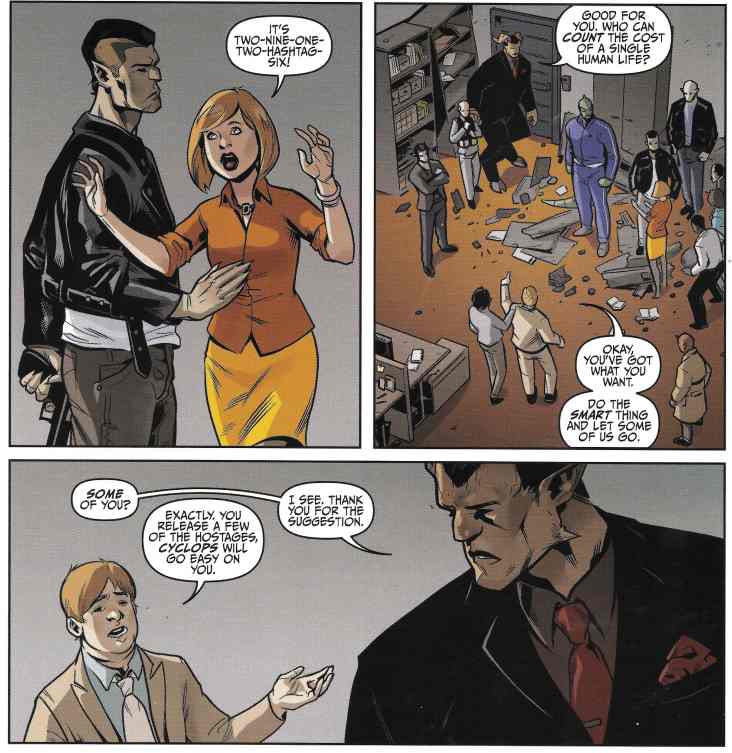 And seeing as to how they have gotten what they want, this guy’s suggestion makes a bunch of sense… 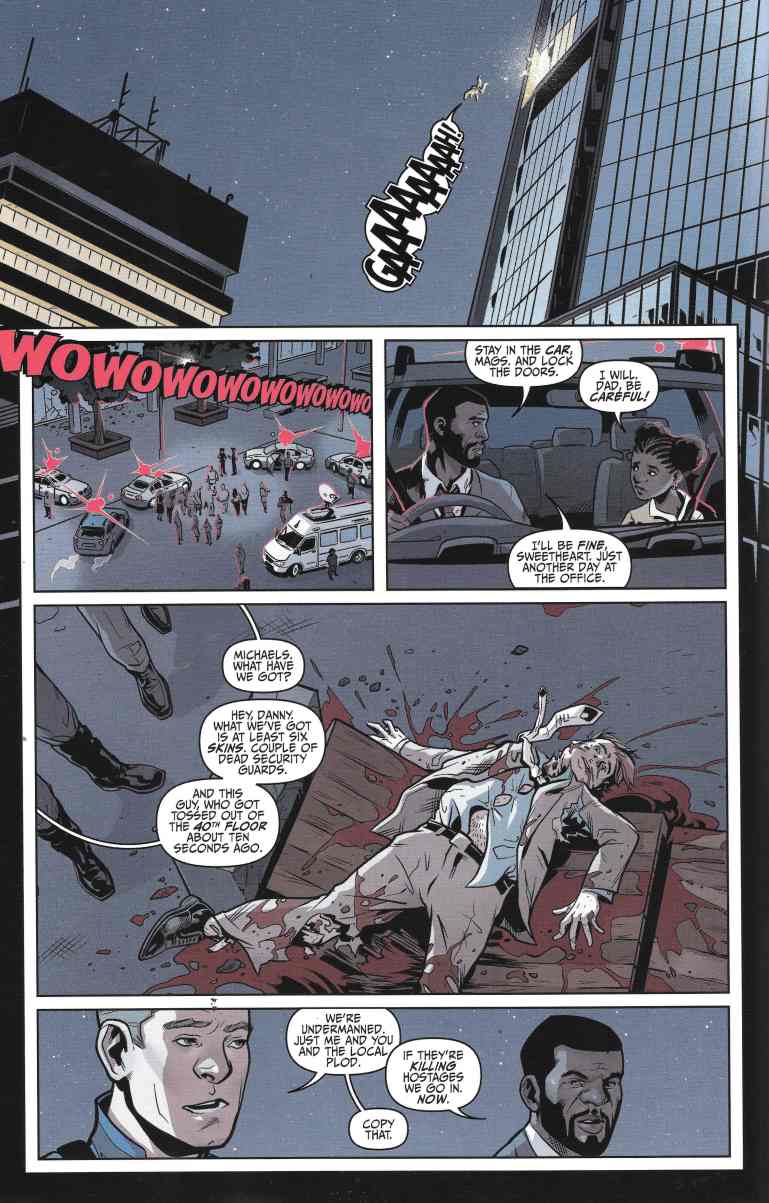 …just not to the asshat devils running the show.

We learn Mr. U’s name is Ulescu and that the she-devil that provided the information was correct in the information that safe contained. Not sure how this all links together but an under-devil reports there are blueprints, costings, and personnel records that stretch back to some unspecified period.

That period remains unspecified specifically because Ulescu senses the police presence in the building, which prompts him to release the hostages. Starting with Mr. Keene… 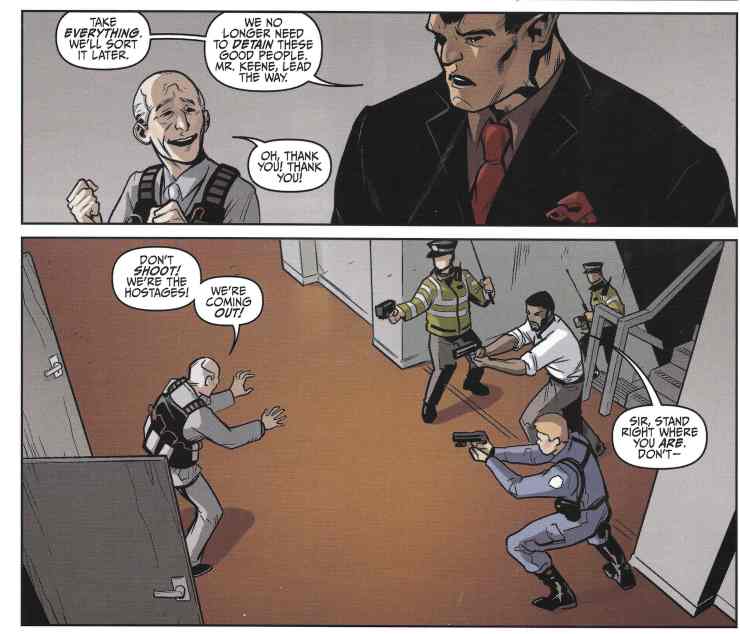 …which ends with Mr. U detonating Keene’s vest as soon as he makes contact with Danny’s squad. It kills Mr. Keene and injures most of the other others, Danny included. The devils then walz right past their prone bodies, although U mentions something about “otherwise all these deaths meant nothing…” which I can’t fathom if there is a reason to this that could some how have me siding with the devil’s actions. 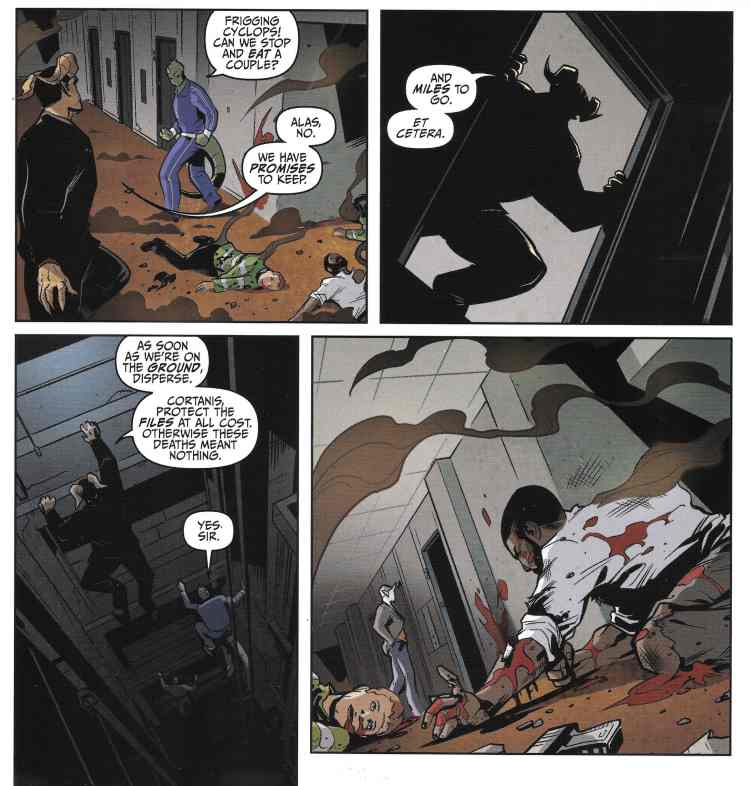 Whatever that plot line will develop into, Rhak stops long enough for Danny to get a bead on him…although the bullet appears to do nothing more than invite him to slap the injured Danny around some more. 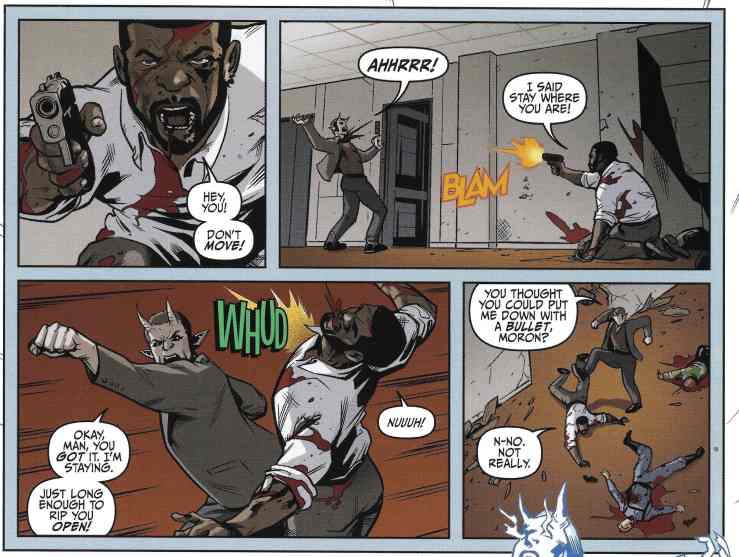 But only so much that it draws Rhak in close enough for Danny to taze the unholy crap out of him, giving Danny his only suspect. 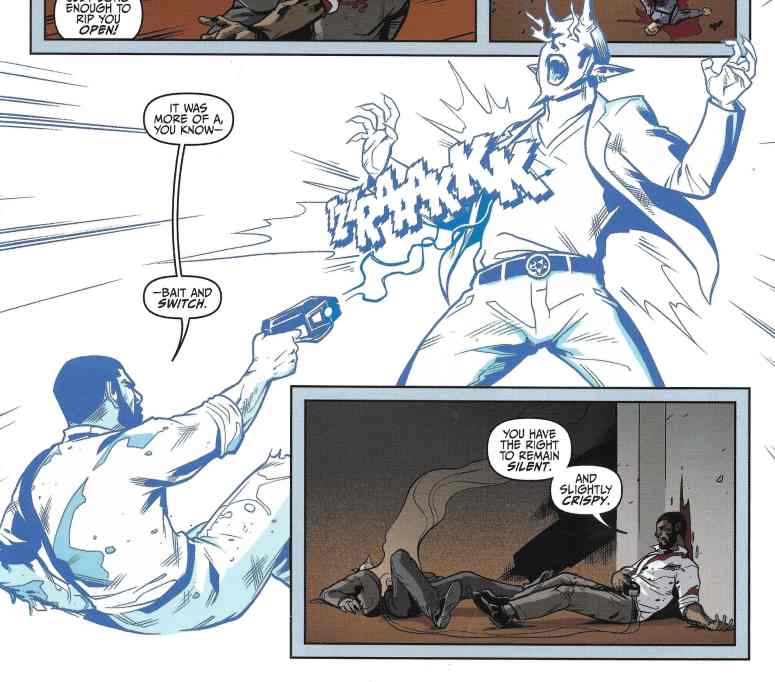 Maggie and Danny get reunited, the character of Gloriana Veer is introduced…and unless I miss my guess she’s a potential love interest for Danny. 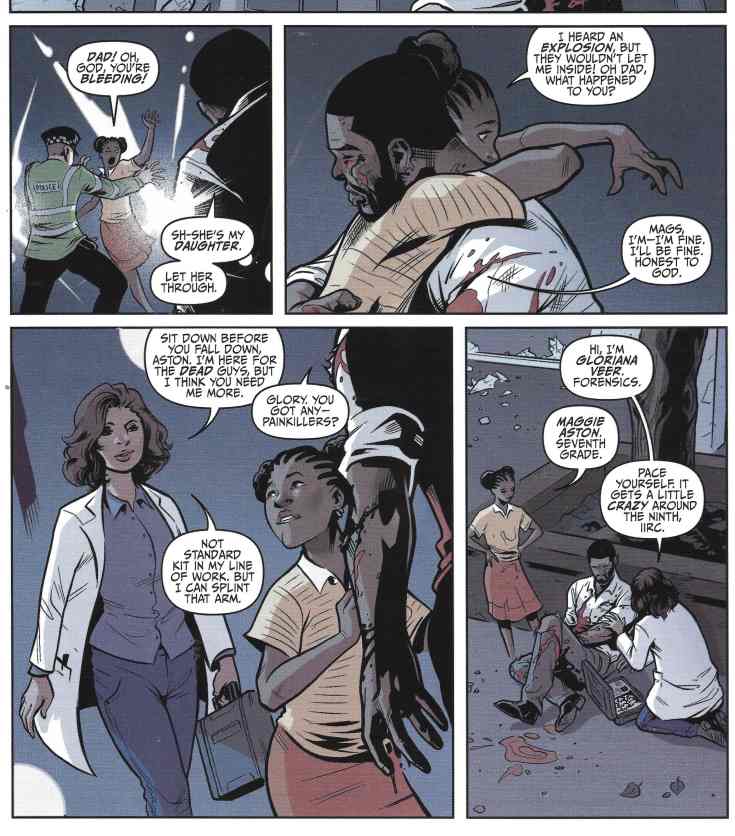 Danny’s boss shows up, we learn some more about NATHAN Ulescu and SIMON Rhak, the fact that we are learning first names showing that  Danny’s boss knows who these guys are…and maybe, just maybe my paranoia is kicking into high gear here, but did Lt. Devereaux tell them to “strap Rhak down tight?” like he expected something to occur? 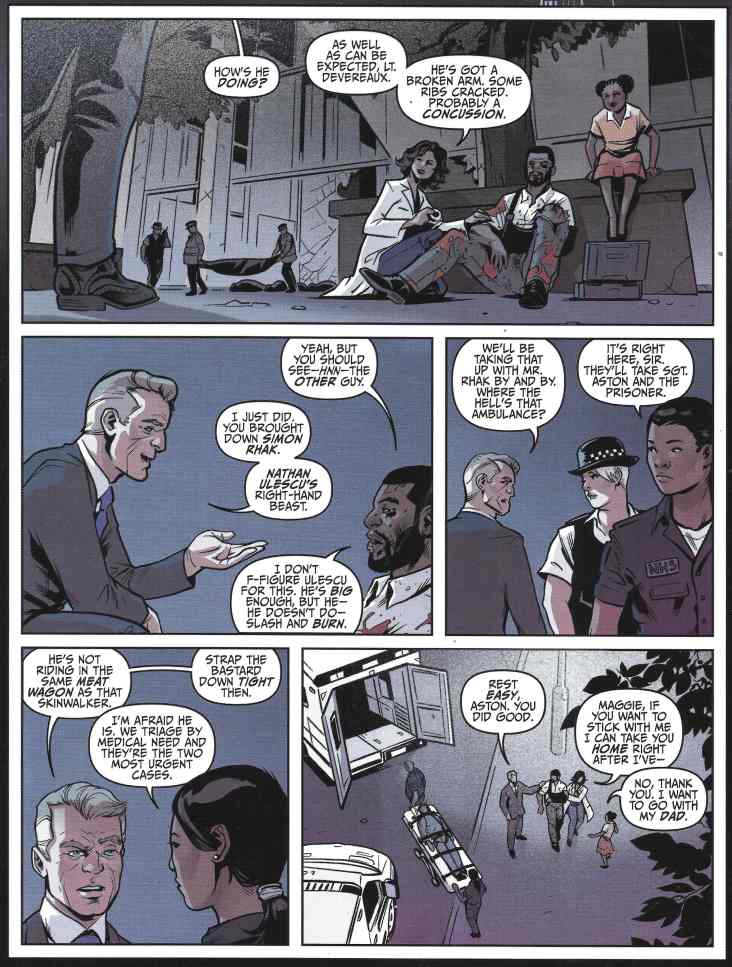 Mags loads into the ambulance, and sure enough as she chides her dad on staying alive… 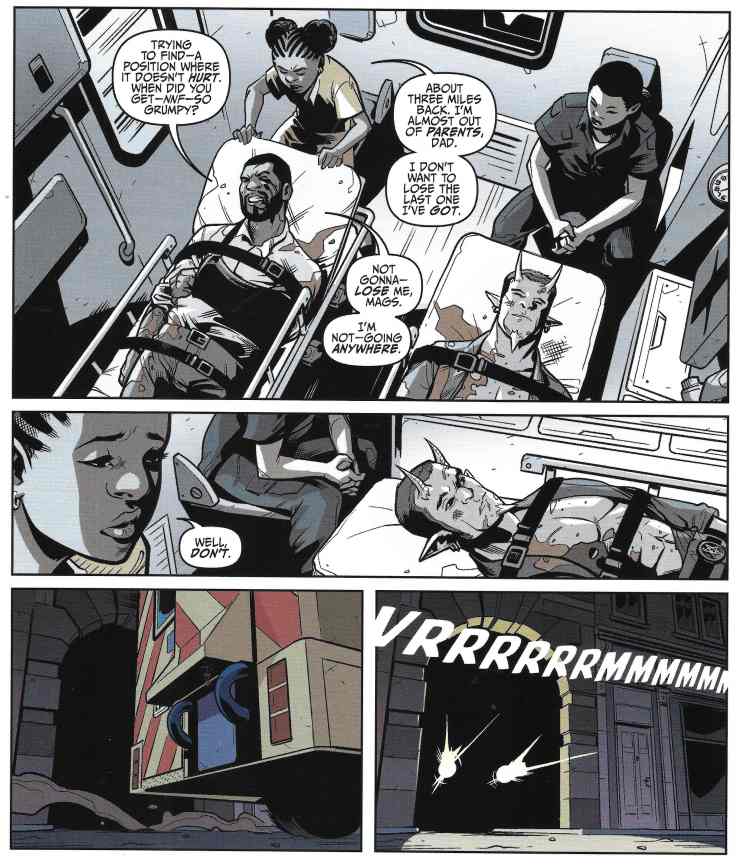 …a black SUV unexpectedly rear-ends the medics, sending Mags into the side of the van and the entire thing into the…Thames? I’m guessing. How many rivers are there in London? 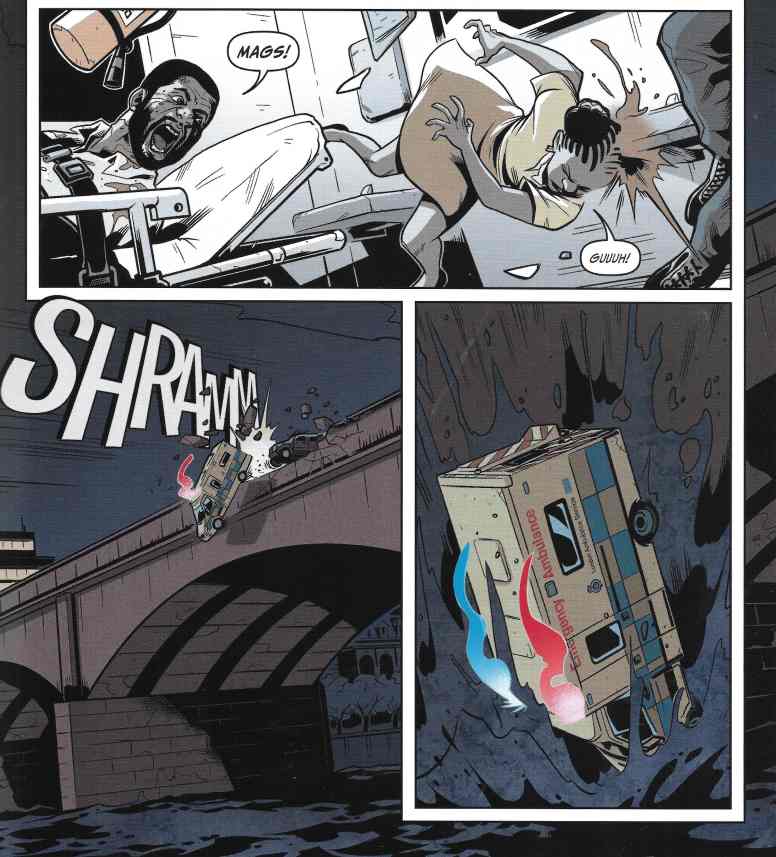 And all the occupants of the ambulance drown. The End. 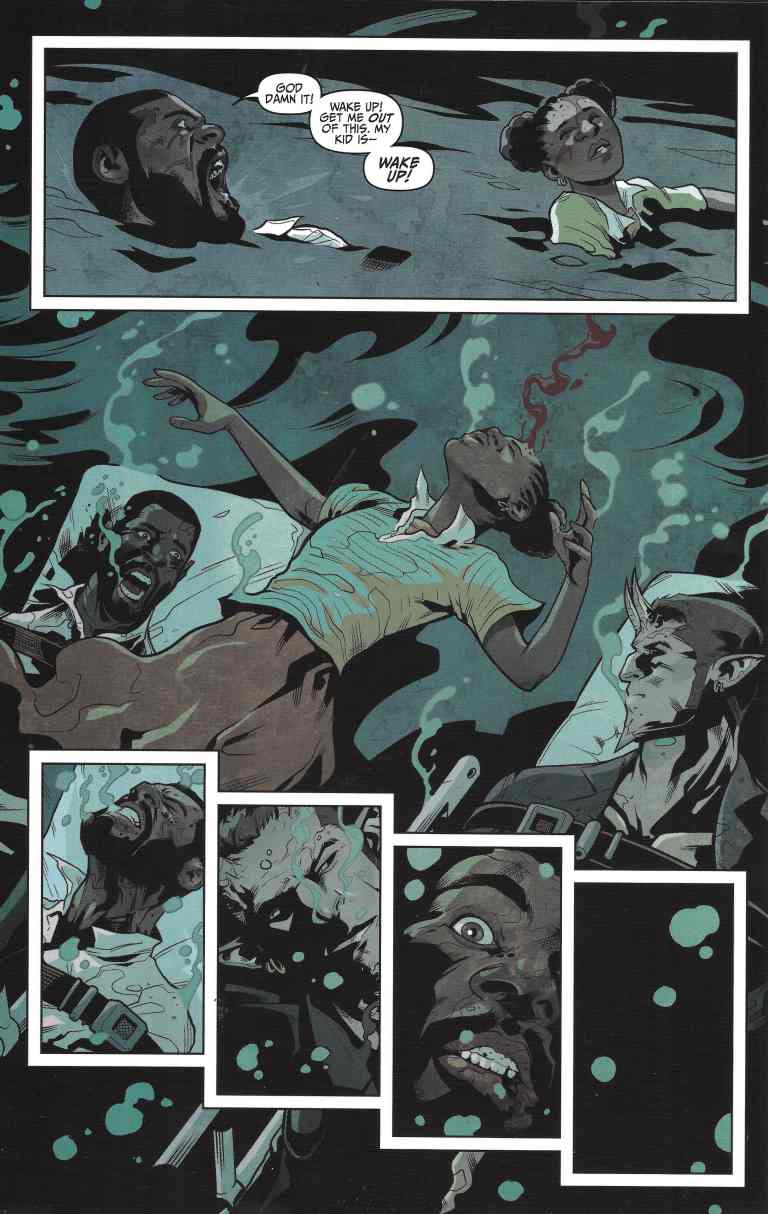 At least for human Danny it is. His body is wheeled into the morgue where Gloriana Veer is tasked with autopsying him…(note that the shaitan isn’t in the morgue?) 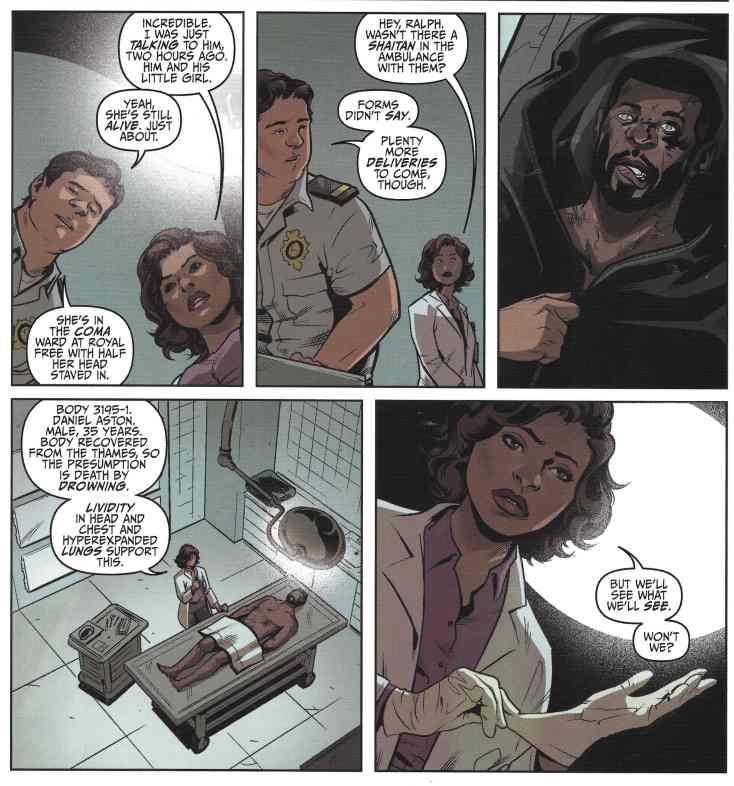 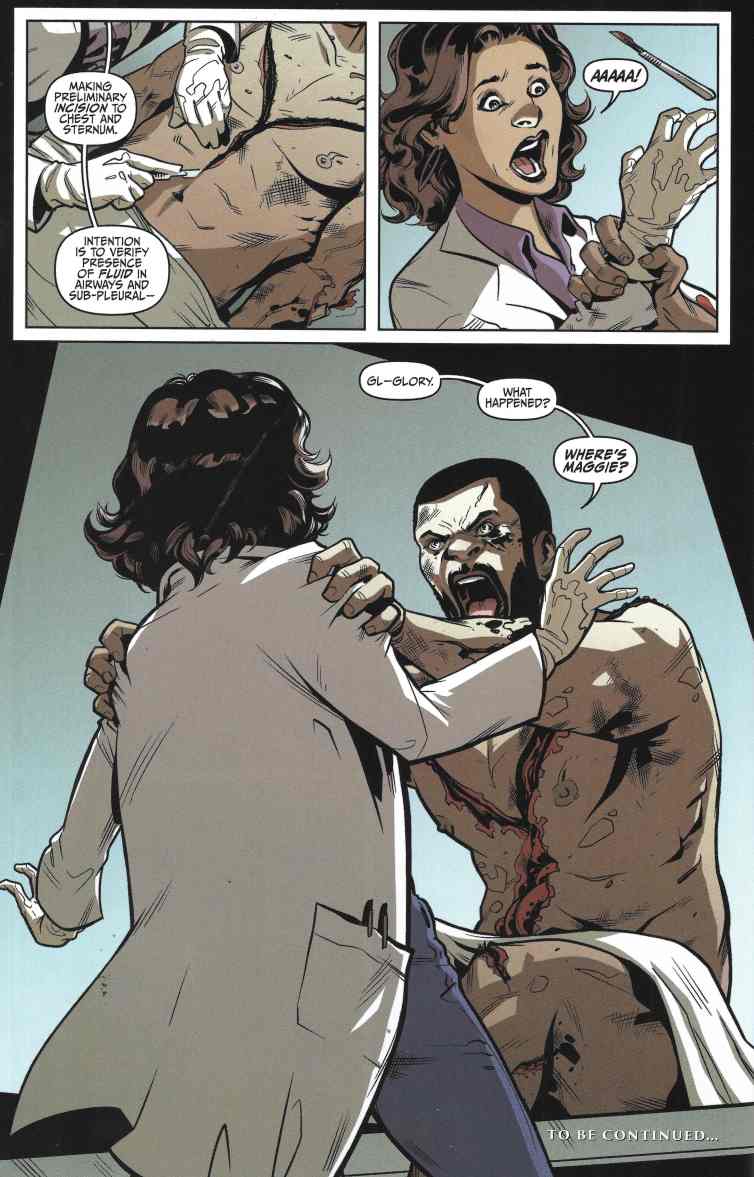 Good job, Darkness Visible. I’m going to have to seek more of you out. Only six? Well that makes it affordable at least.

But yeah, they Carey and David setup a good mystery here. I’m interested in the world, in the characters and in the contents of that safe room and what secrets it covers up. Looks like my buddy cop movie is down by one person, but I think Rhak is inside Danny at this point and seeing how that changes his character should make for interesting follow-up. As well as whether Danny’s literal deal with the devil included saving Maggie. SO Many UnAnswered Questions!

Good book. Check it out!
Posted by SonOfCthulhu at 3:32 AM