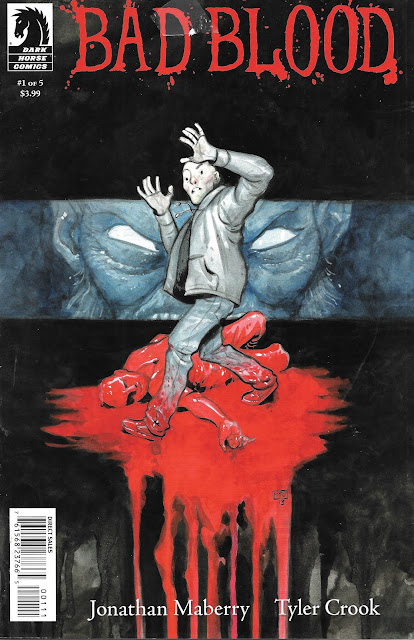 I’m going to urge you to rush out and buy Bad Blood. On the strength of this one issue, Maberry and Crook had a solid story on their hands with this five issue miniseries and I can’t help it if 2014 audiences couldn’t see it.

Maberry is a novelist with several books under his belt. That would be his black belt, as his first writing chores were martial arts instruction manuals. He then gravitated to exploring folklore and the supernatural, novels (one of which earned him the Bram Stoker Award for Best First Novel in 2007) until his branching out finally landed him as a freelance comic book writer. As of now he’s pretty much all over the writing landscape and Bad Blood makes me want to look at what else he’s done.

As for Tyler Crook, we’ve seen him before on Halloween Post-A-Day when we discovered Harrow County, a book I ALSO recommend you go check out.

But for now, we’ve got problems and we’ve gotta solve them…Don’t ya know we got Bad Bloooood!! (Seriously, I have to figure out how to not have Google search pull up music videos when I’m researching comic books)

We begin with Trick, still in bed as the late morning sunlight streams in through the window blinds. Trick is woken by a friendly voice, but one look at Trick’s face and we know all is not well with the young man. 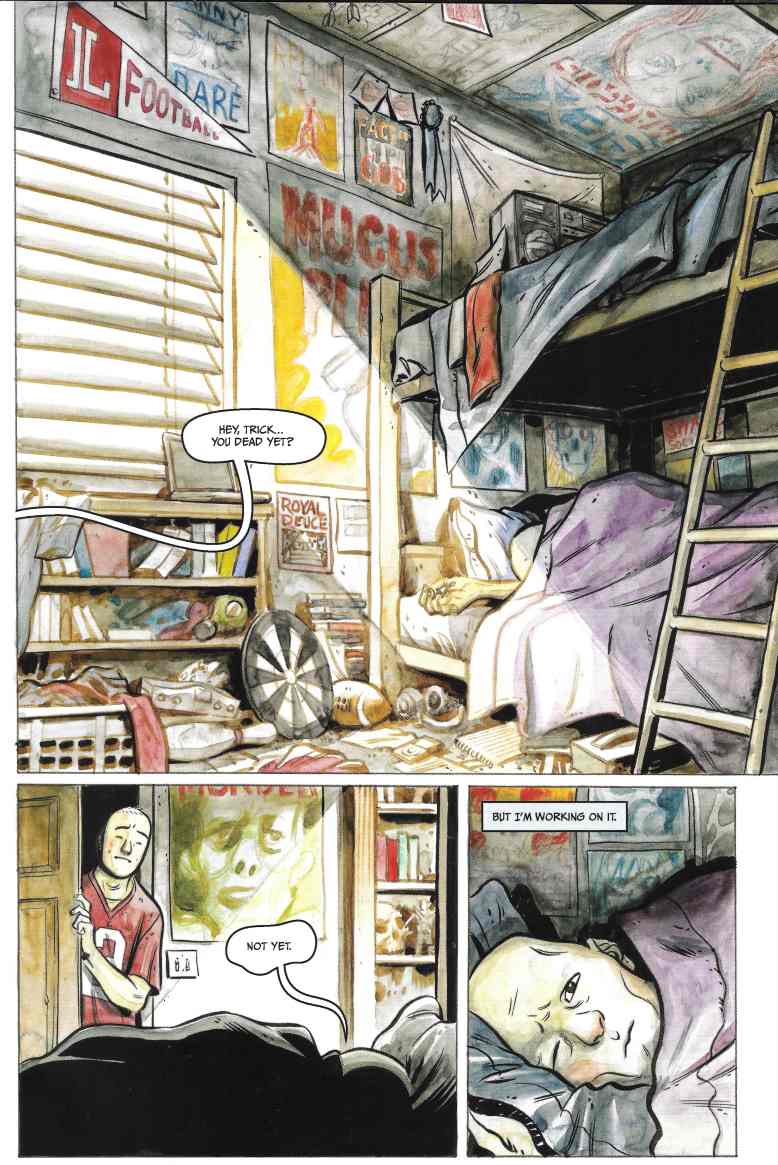 Trick goes into the sordid tale of how he and his best friend Kyle were born only seven minutes apart. About how alike they were. It’s clear that something has happened, although Maberry is not letting that cat out of the bag on page two. 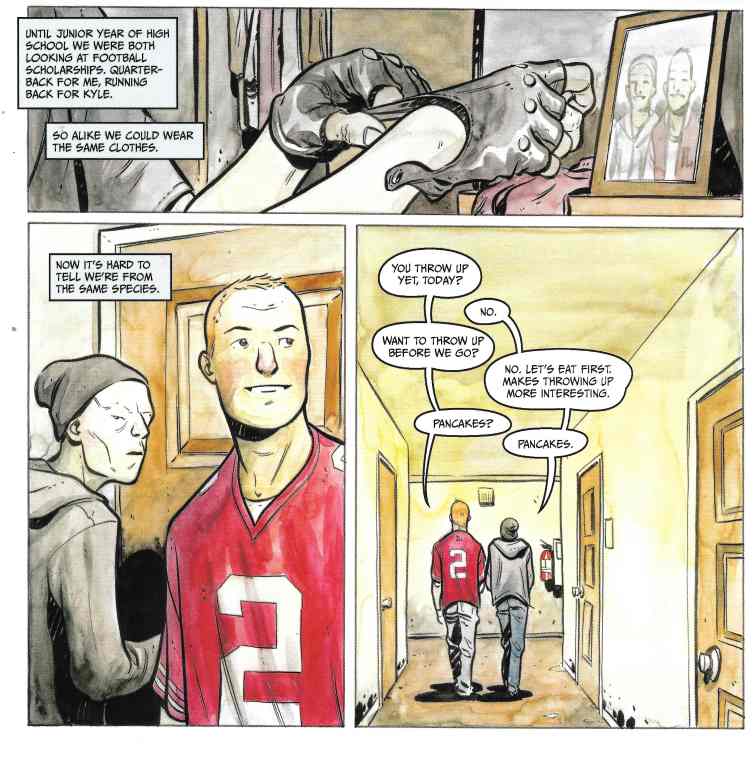 By page three though, we know. Without it being said the thought of cancer is evoked by both the pictures of Trick in the hospital and one word: “chemo.” 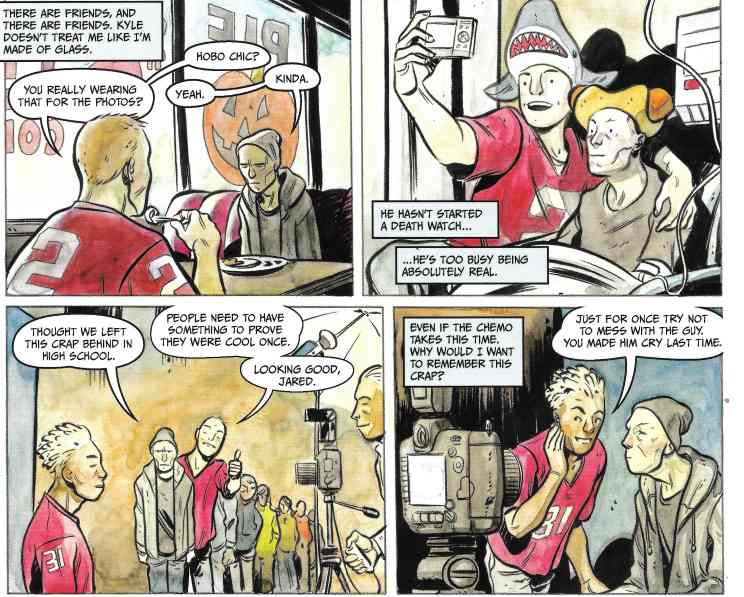 And Kyle is one of Trick’s anchors, someone who doesn’t give up on a friend. Maberry and Crook create such an endearing vibe between these two that by the end of page three I am sold on their story. I will follow these two through anything. I’ve already earmarked my bin diving lists.

It has something to do with how they have evoked human warmth from these characters that does it. Like this series of yearbook pictures where Trick acts up, playing off his hardship in a way that is both tragic and brave at the same time. Damn it’s hard not to fall for this book. 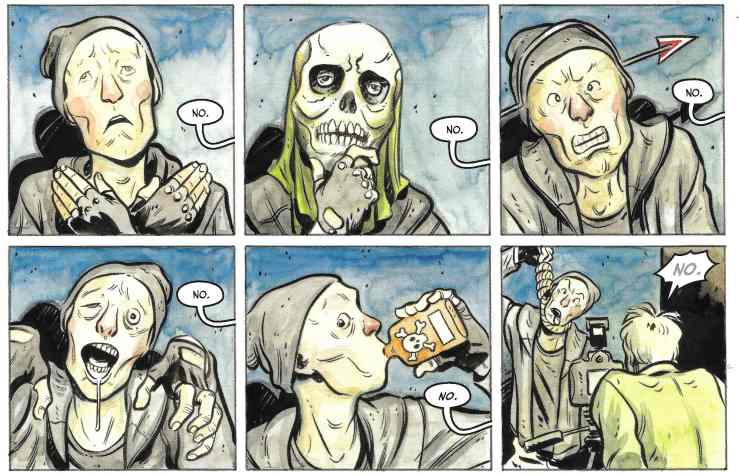 And it is especially hard not to empathize with Trick during all of this. Kyle asks about how the treatments are going. Trick says they will do a panel after this round of chemo. Kyle wants to know where his friend’s heart is at… 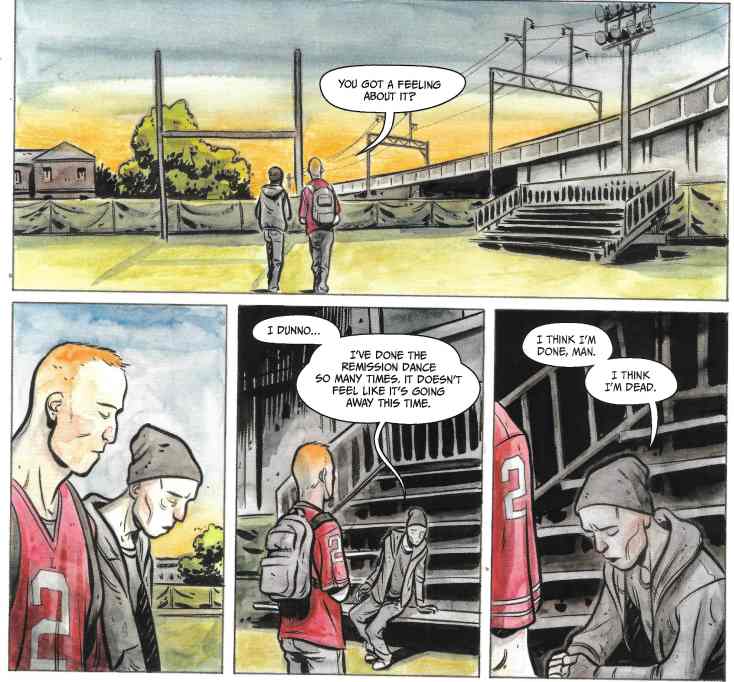 God Damn it, book! You don’t make me tear up on page freaking FIVE. Man, this book has hooks that sink into you quick. 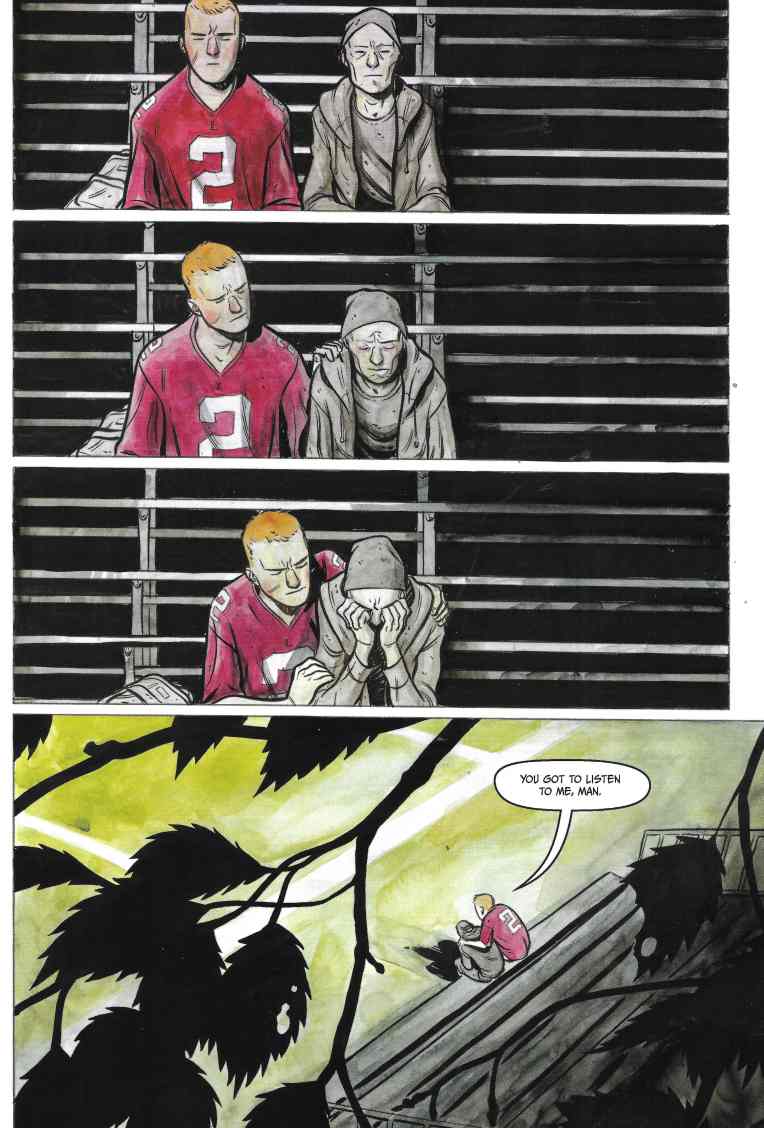 Kyle tells Trick a few things he can and can’t do. It is an impressive speech. 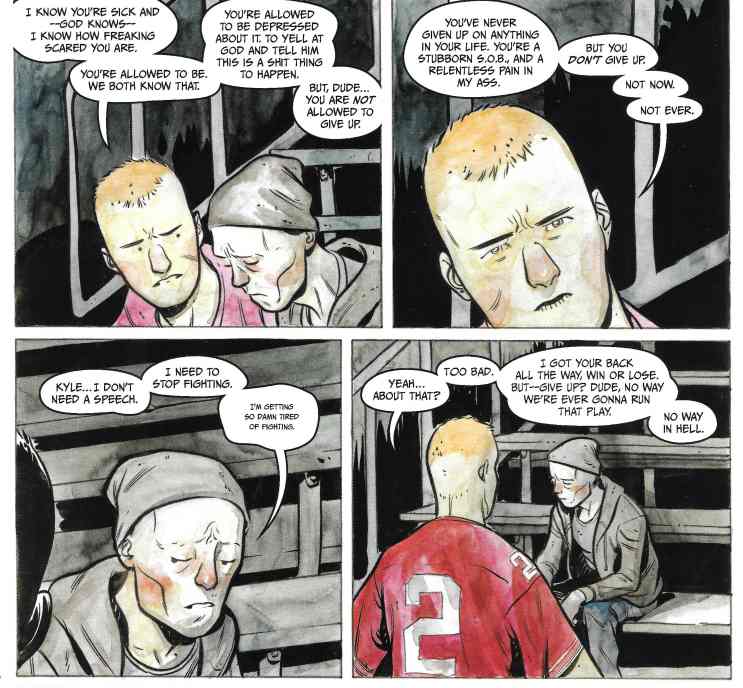 And it is followed by an utterly human moment that is captured so gracefully by Crook. 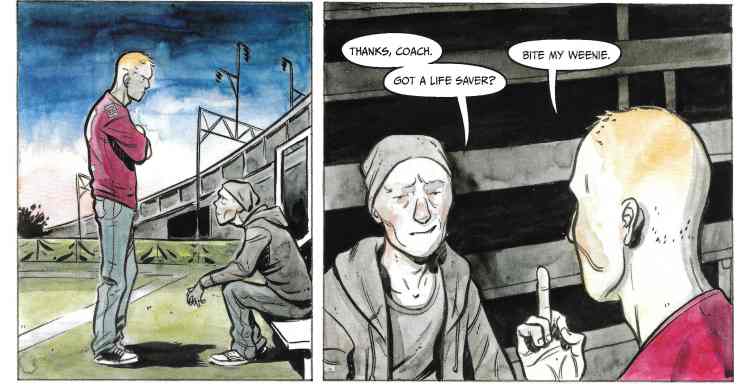 And utters something entirely too spot on as Kyle leaves… 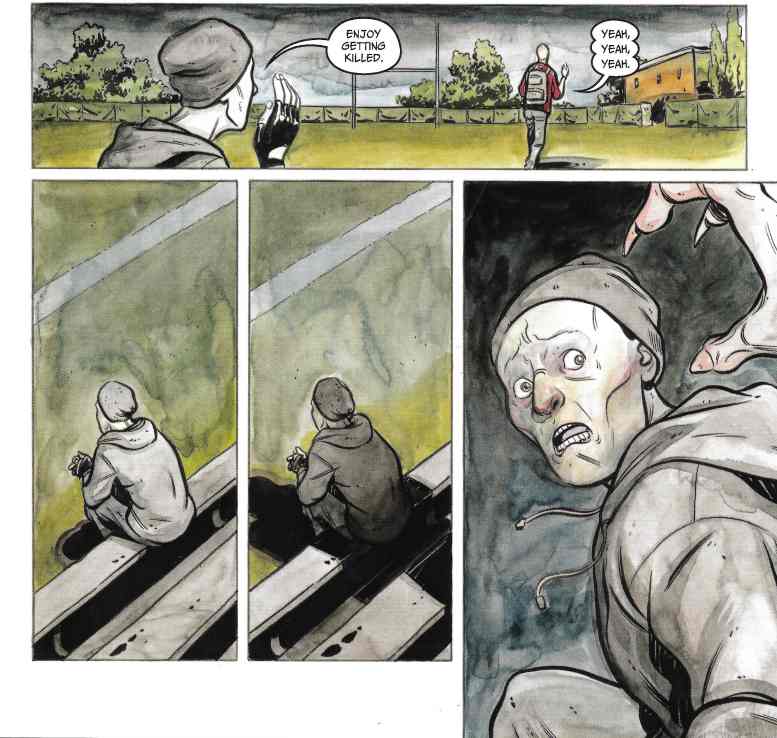 Then Trick is attacked by something that looks like a cross between a Lovecraftian deep one and a vampire.
The struggle is brief, but we feel the helplessness of Trick’s situation and wonder if his failure to fight back is a metaphor for where his illness has taken him. 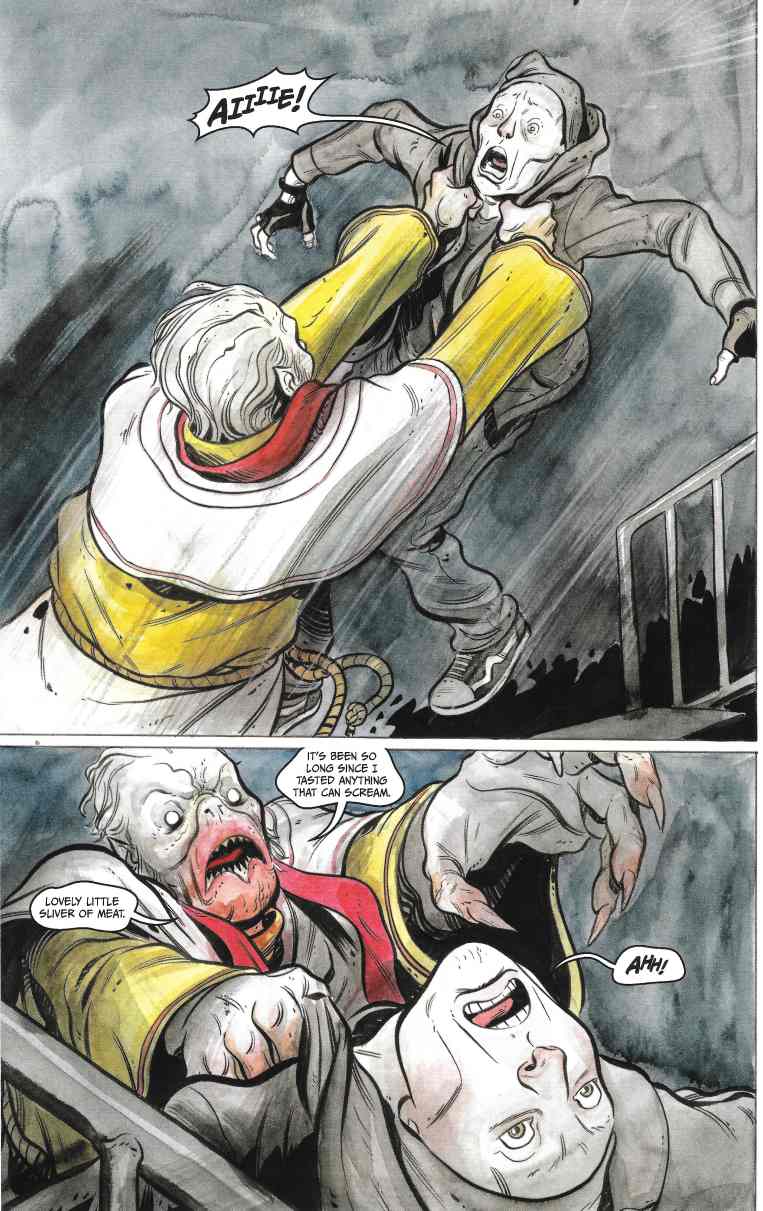 The creature begins to feast on him… 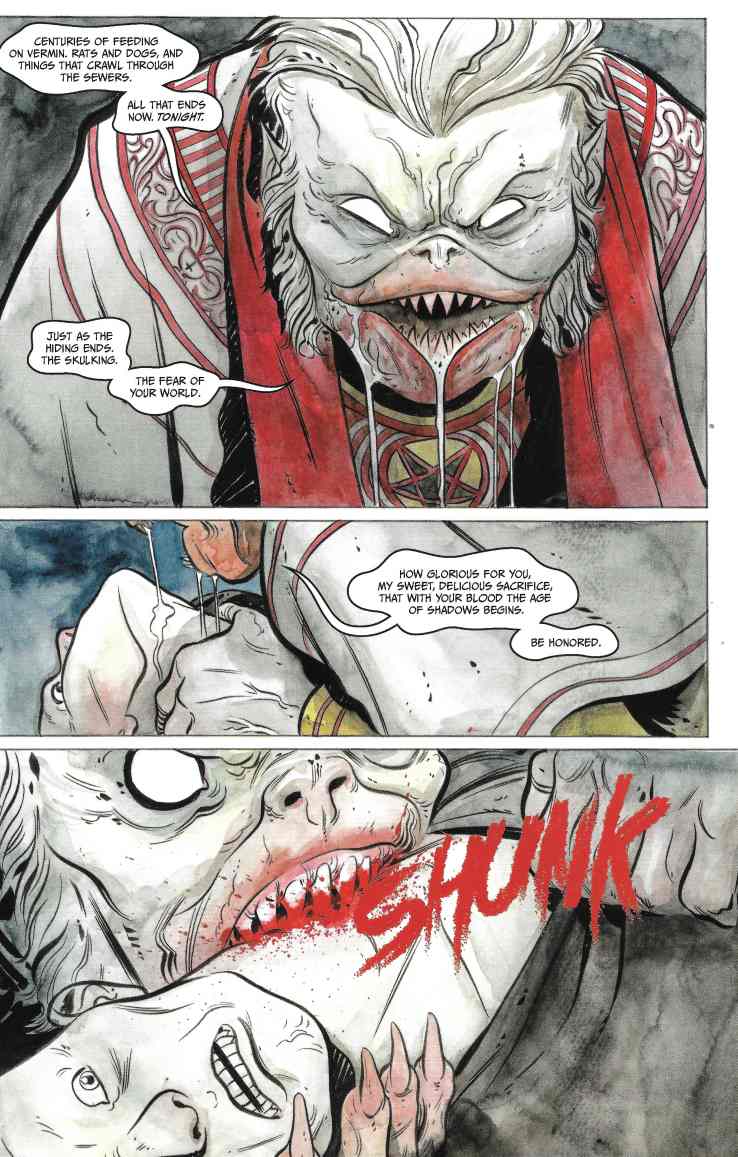 …and just as quickly pulls away. The chemical cocktail running through Trick’s body acts very differently to the vampire’s skin and soft tissues. 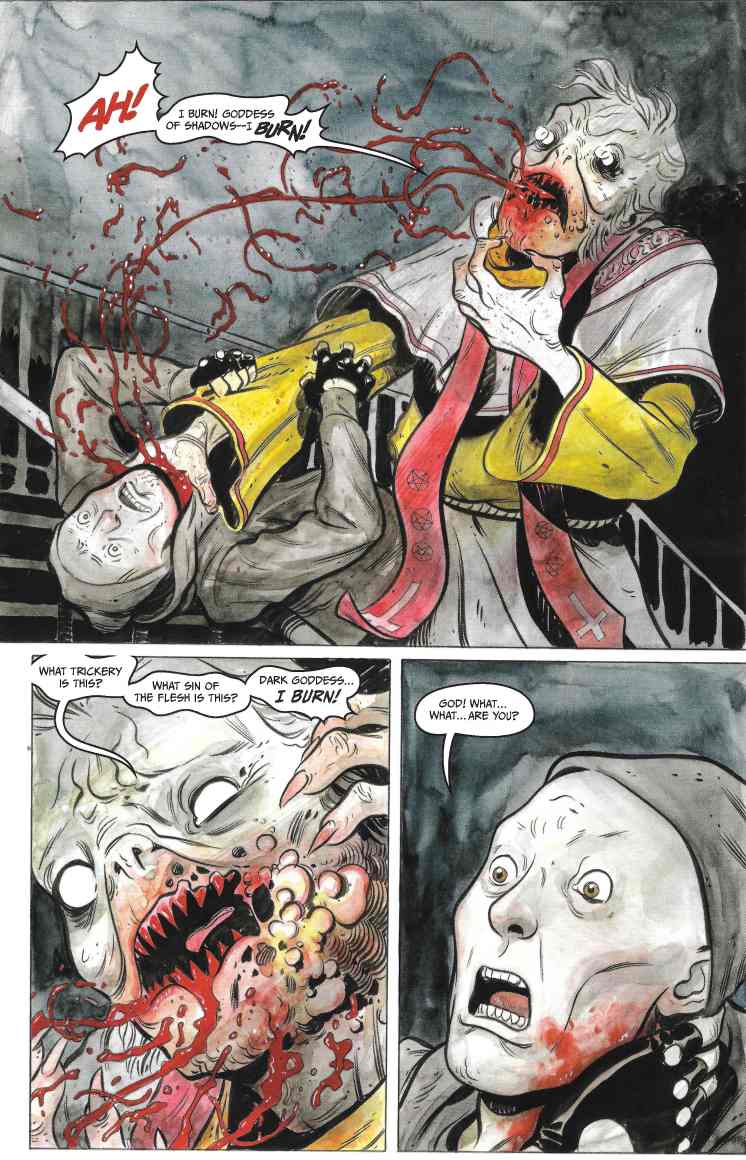 In fact Trick’s blood does more than just irritate his skin, but actually burns through it like molecular acid. The attack leaves Trick injured and in shock. 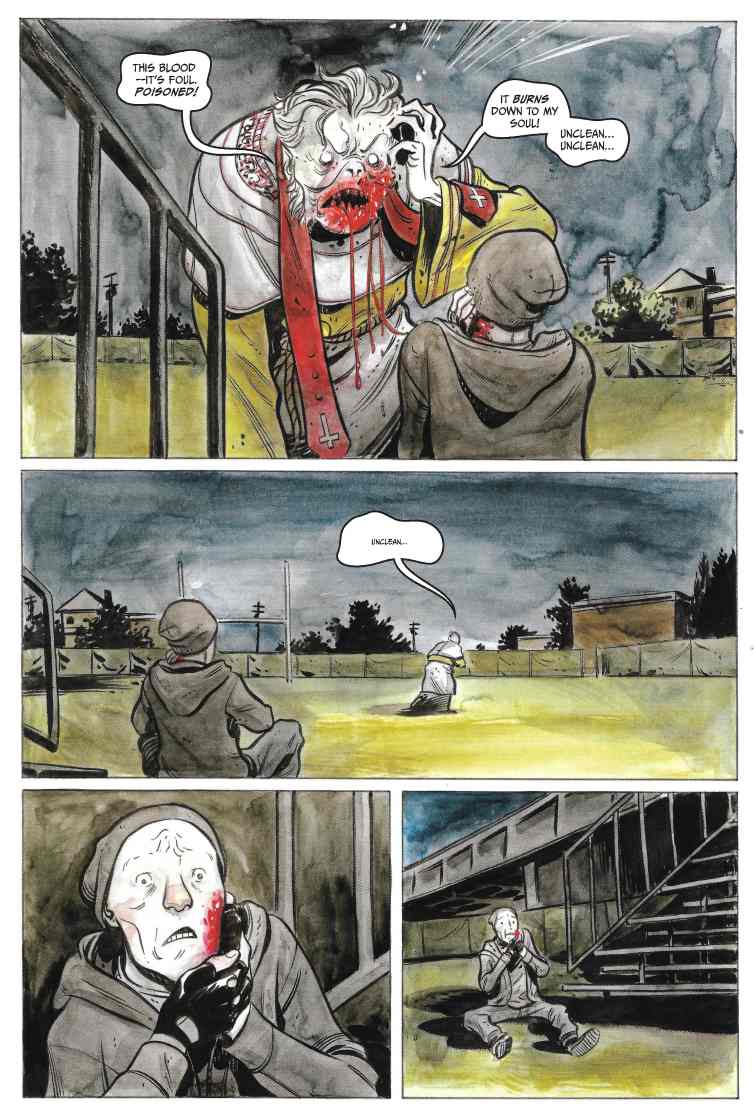 The entire sequence left me the same way. Injured after rooting so hard for Trick and then feeling like he was about to be killed and in shock at over how brutal, violent and upsetting the book turned in a matter of just a few panels. This is really superior sequencing.

That’s not all though. The worst is yet to come.

Trick picks himself up and runs across the field, trying to call his mother. When he gets no answer there, he moves on to Kyle. As he makes it to the school dumpster, Kyle finally picks up. 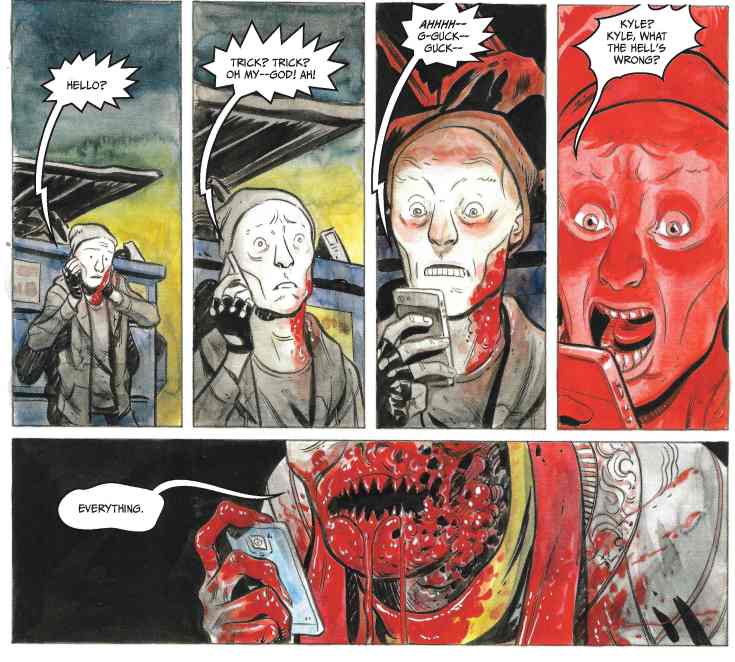 Kyle is murdered as Trick listens. 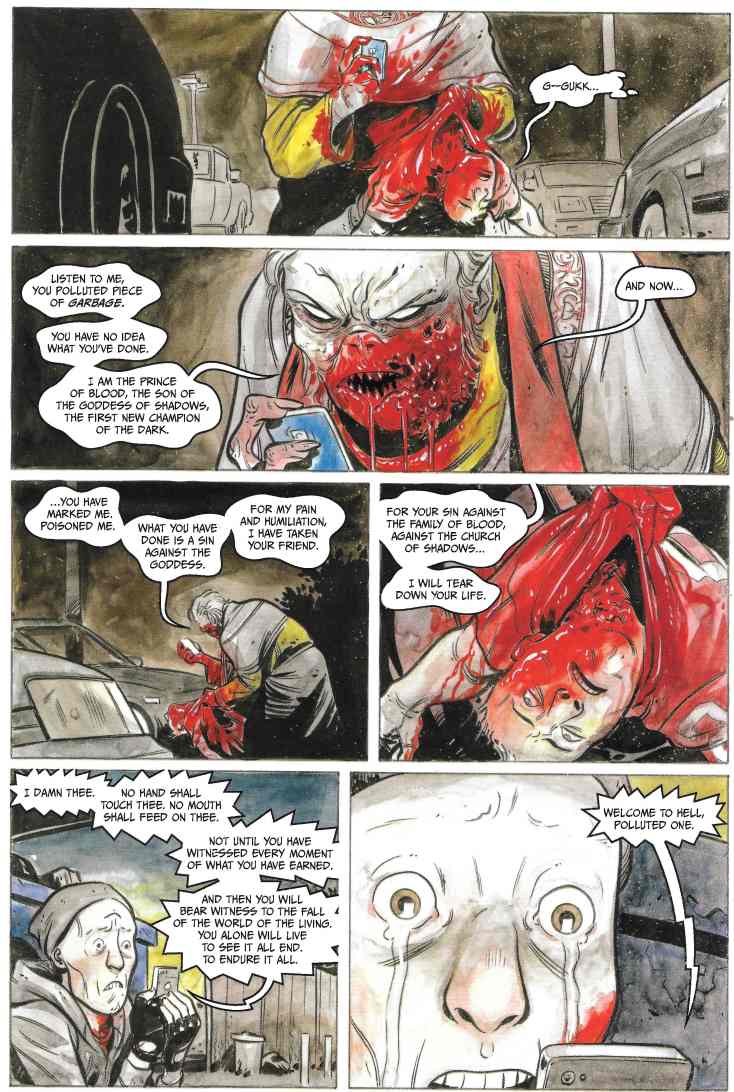 It appears this creature has a vendetta, one that just cost Kyle his life. I am so enraged at this point in the comic that I want to leap through the page and do the vampire in. Seriously. Haven’t been this upset since the end of Se7en. Don’t fuck with my emotions!

What follows is a series of panels showing Trick still in shock over the loss of his friend, right up to Kyle’s burial. 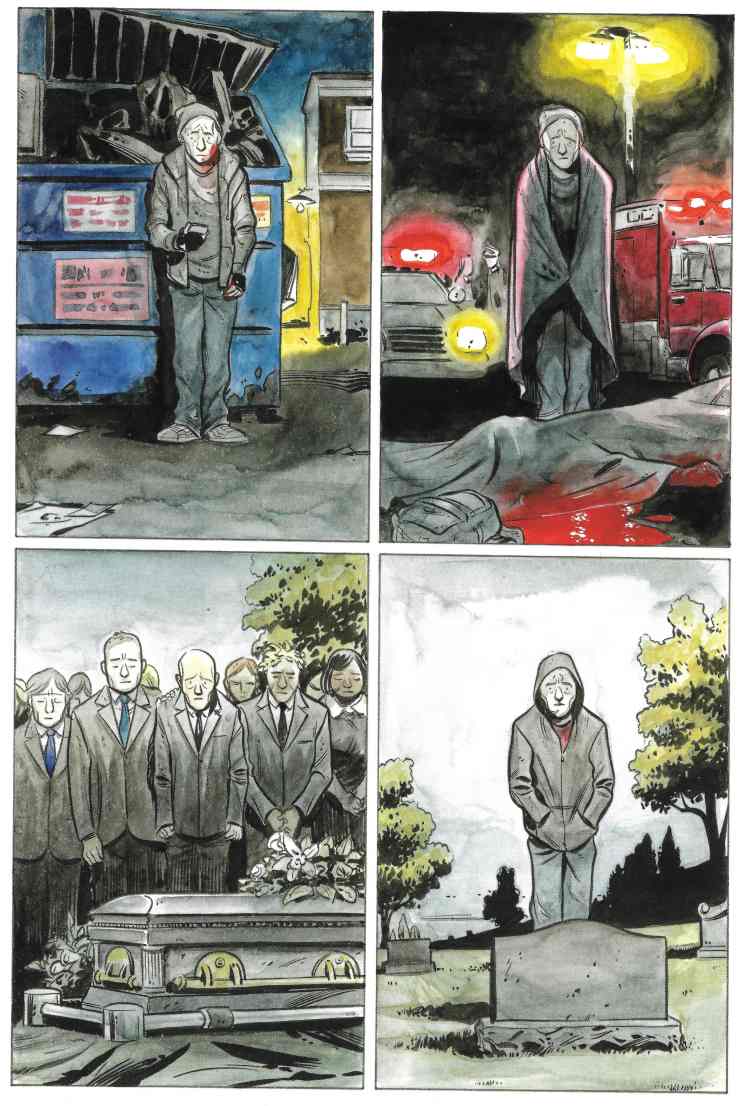 The police are left with no leads and Trick can’t give them one. He knows how crazy he would sound. He stares at himself in the mirror until he can bear the weight of the guilt no more. 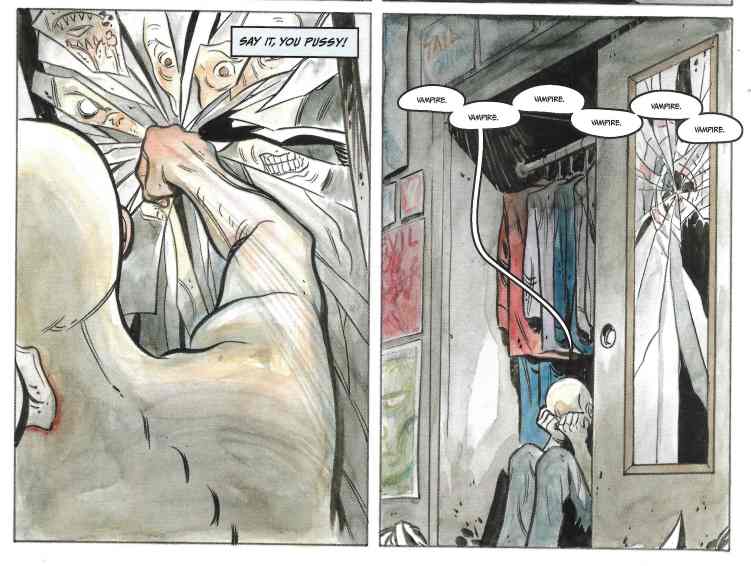 His rage finds the easy target and then he allows it to become something else. Something motivating. Even in the face of his weakness, Trick is learning that he can be strong. 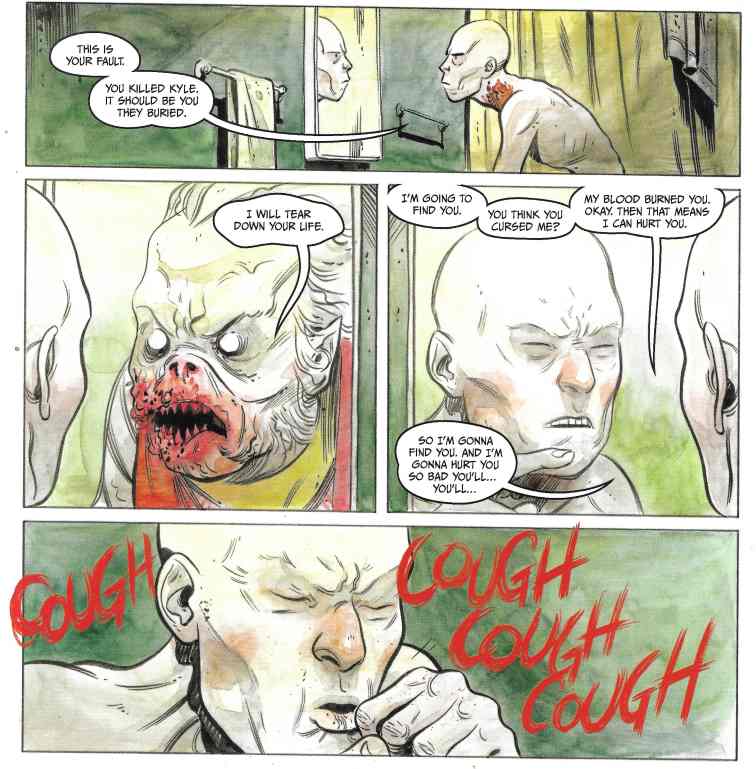 He tries taking it to the cops even though he knows what they will think of him. Another show of strength. He spends his time ruminating on where the vampires would live. How they would get around. He even arms himself with holy water after the disrespect this priest shows him. 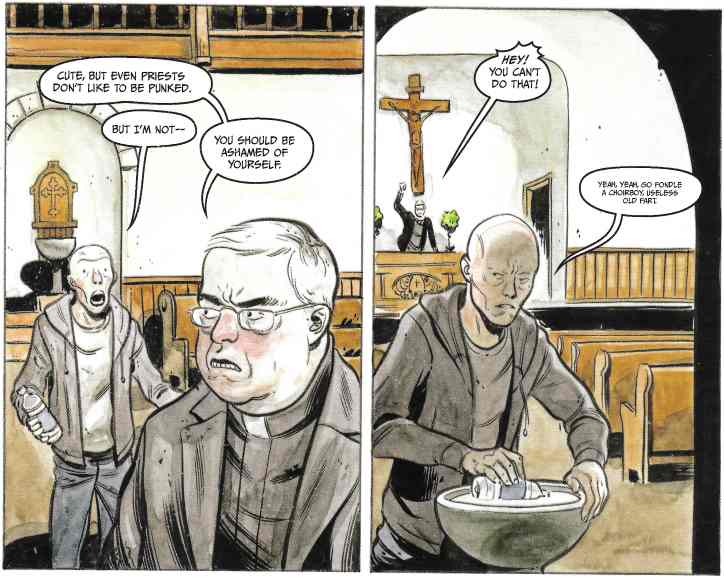 And he is goaded into action as the evil thing kills someone he knows again, keeping in tune with the plan it set out to murder everyone he knows, everyone he loves. 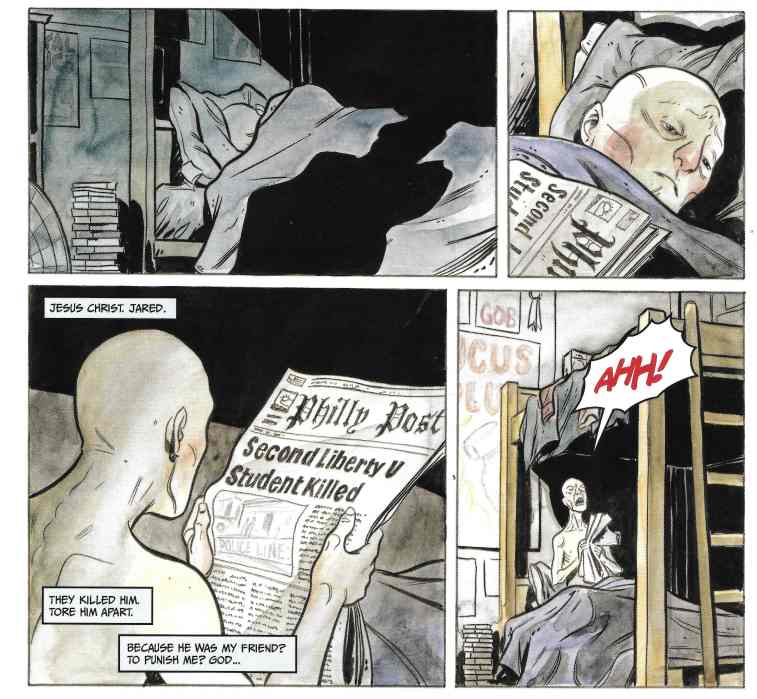 He tries the police again but again he is scoffed at. So he starts researching on his own to find the vampire before it strikes again.

He heads to a club that the website says the frequent. He is initially let down, as most of the club appear to be posers who are merely acting the part. 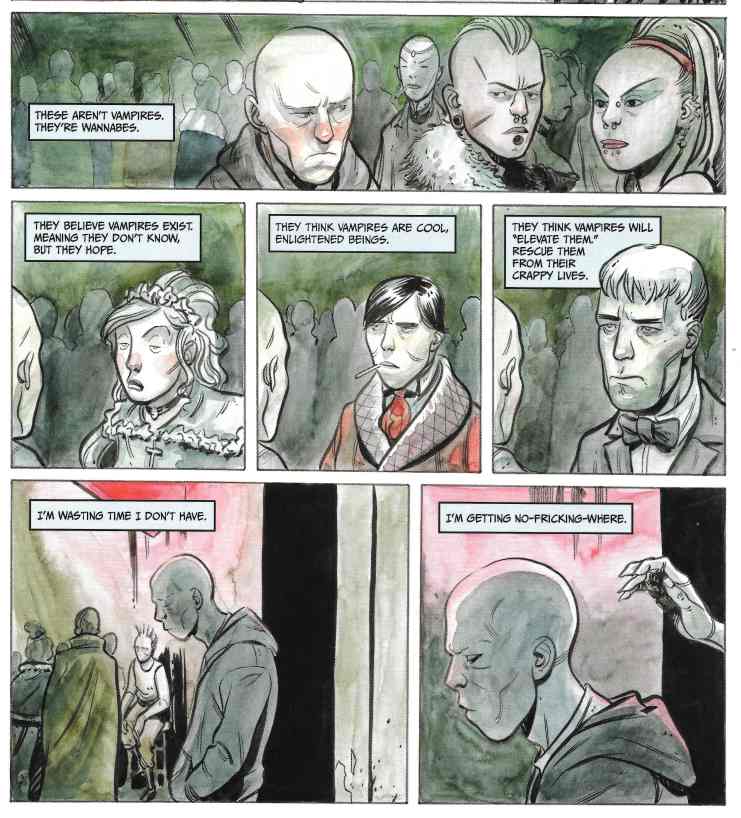 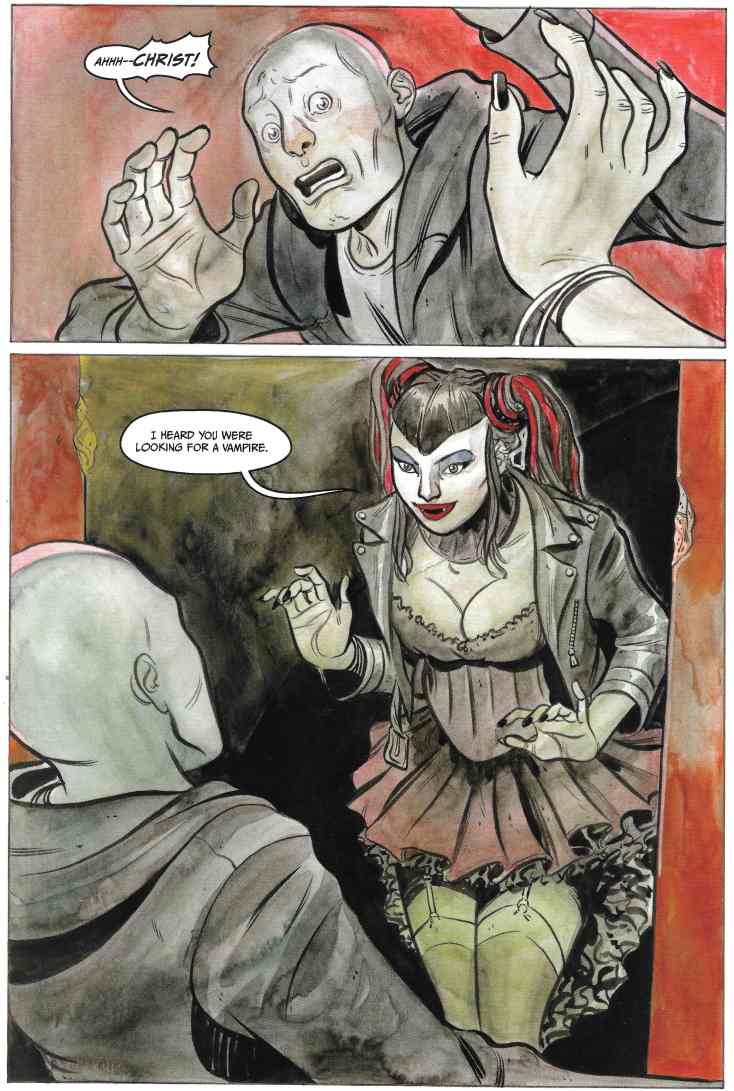 Can’t honestly state where the story goes from here. All I know is, that this book is begging me to find the trade or the other four issues. It is uncommonly good and I NEED to find out what happens to Trick. And I need to see that monster get what’s coming to him.
Posted by SonOfCthulhu at 2:16 AM