Marvel Zombies vs Army of Darkness #1 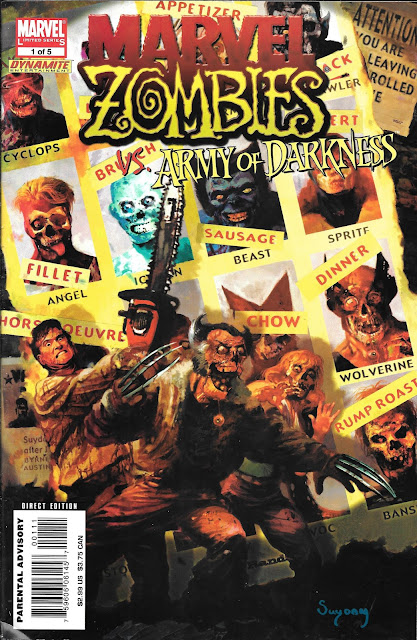 That’s right: Marvel Zombies returned in a limited-issue crossover that became both a sequel and also an alternate universe variant of their popular miniseries. This time co-starring Ashley Joanna Williams, Bruce Campbell and Sam Raimi’s idiot-hero of the popular Evil Dead franchise.

And while I normally pass over these Marvel Zombie books when I see them floating in the discount bin, the combination of the two properties made me pick this one up.

Oh, sure I’ve read most all of the Marvel Zombies books, but that’s what libraries are for.

The tales are fun in a one-and-over-it kind of way. How would Spider-Man get taken? Oh, like that. How would Hulk be overcome? Oh, I see. What about Wolverine?...and so on. I’ve read up through the first two mini-series and parts of the other three, but I wouldn’t buy them full price nor even discount bin pricing. They are like six book long What If?... tales, with all the lasting impact those types of stories have. They are good for ONE read through.

But Ash…Ash has a special place in my monster-loving heart. Has to be the way Campbell plays him, in part. And a second large helping of what makes him great has to be Raimi’s amazing instinct for what makes an idiot-hero like Ash tick.

So, we have a bit of hesitation going in. You can’t put actors in comic books. And while Rob Kirkman of other undead comic stories got consulted, Raimi did not receive a call. I’m going to give the issue a chance though. Let’s see what it does with it…

What lurks under that Arthur Suydam homage cover that have become a staple of the series? Why that beginning to the prior Marvel Zombies series that we know so well. A zombified version of The Sentry (Yuck! I hate that character) plummeting to Earth after being thrown through a warp from a distant dimension, little realizing he is infected with a terrible zombie virus that will destroy his planet. 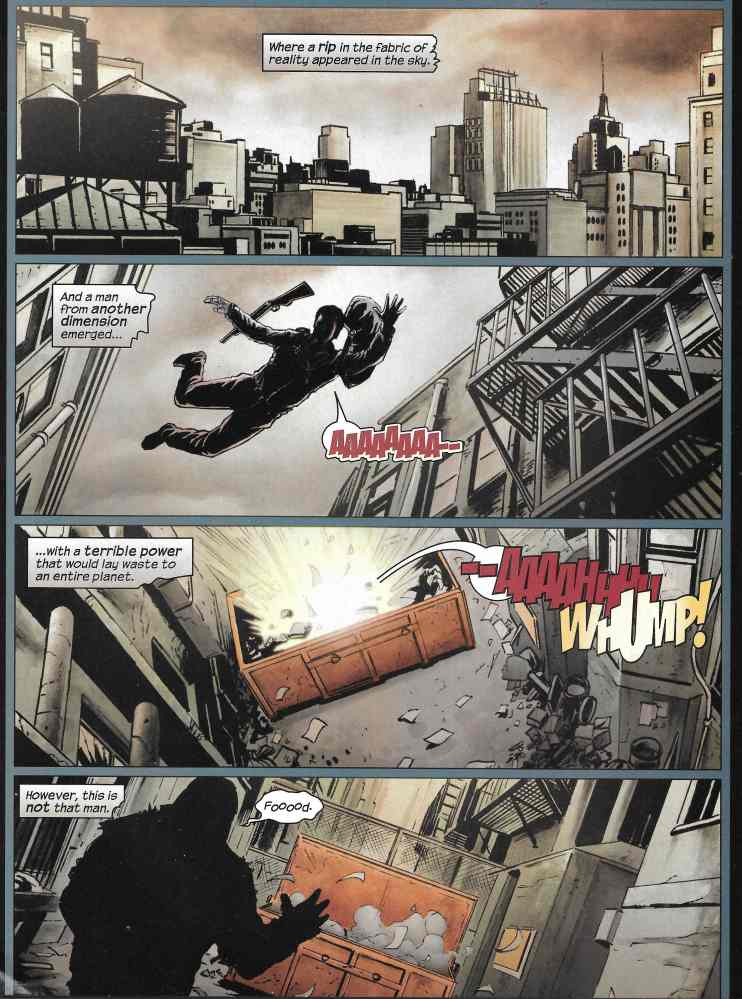 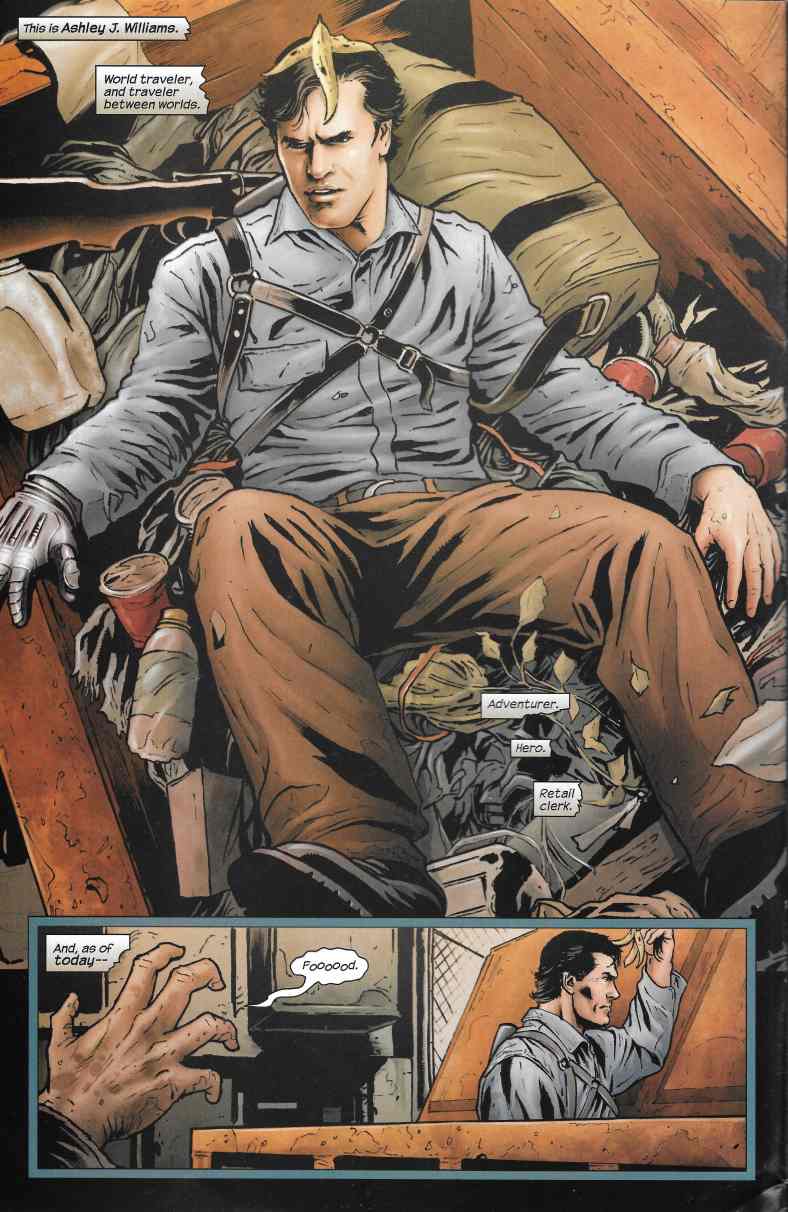 Ash! Housewares! And before you can say “Shop Smart, Shop S-Mart!” it appears he is about to be beset by a zombie trying to feast on his flesh… 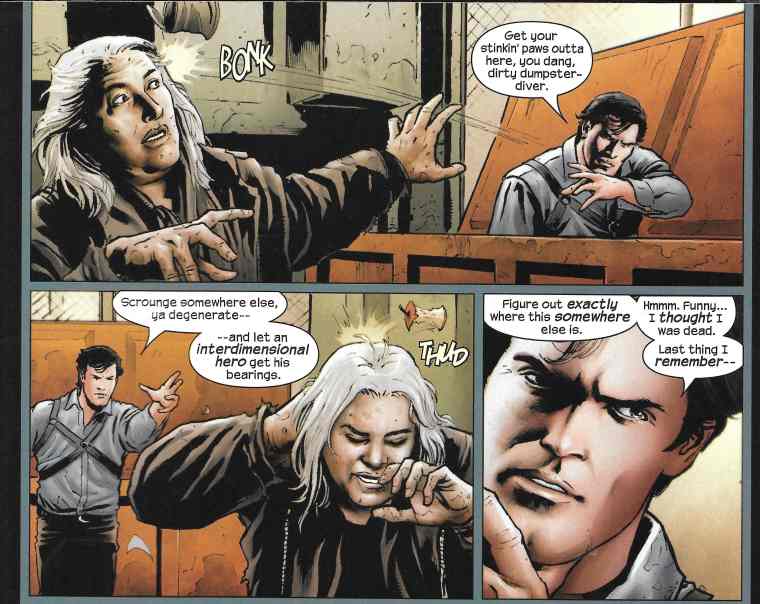 Except it’s not. It’s just a homeless woman. As Ash pelts her with garbage in an attempt to have time to get his bearings, he remembers stepping into a bright light at the end of his Dynamite comic book limited series. Ash was supposed to end up in heaven. His next worry is that he’s ended up in Hell. And that’s kinda true. 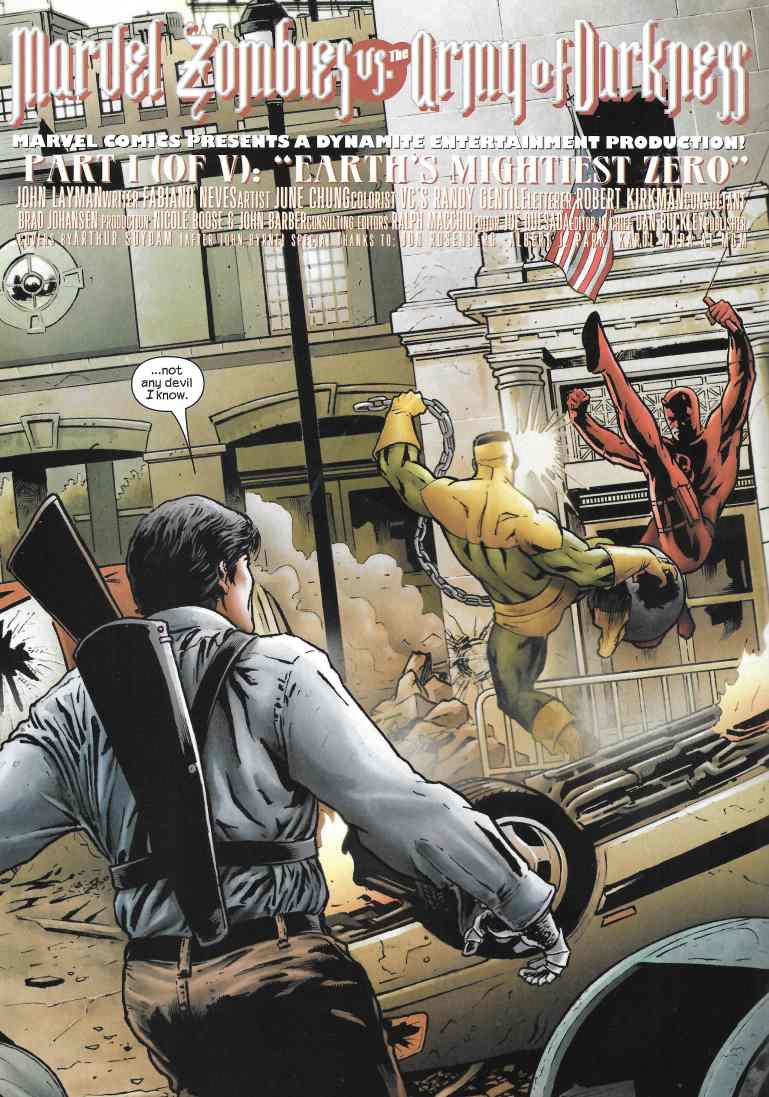 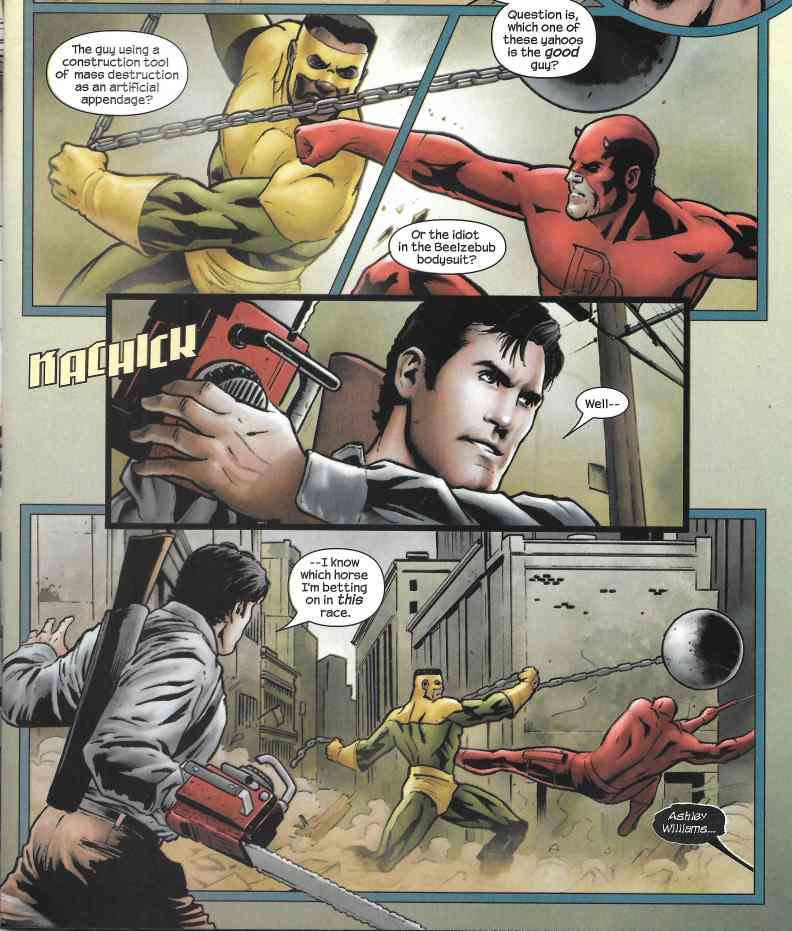 Before he can though… 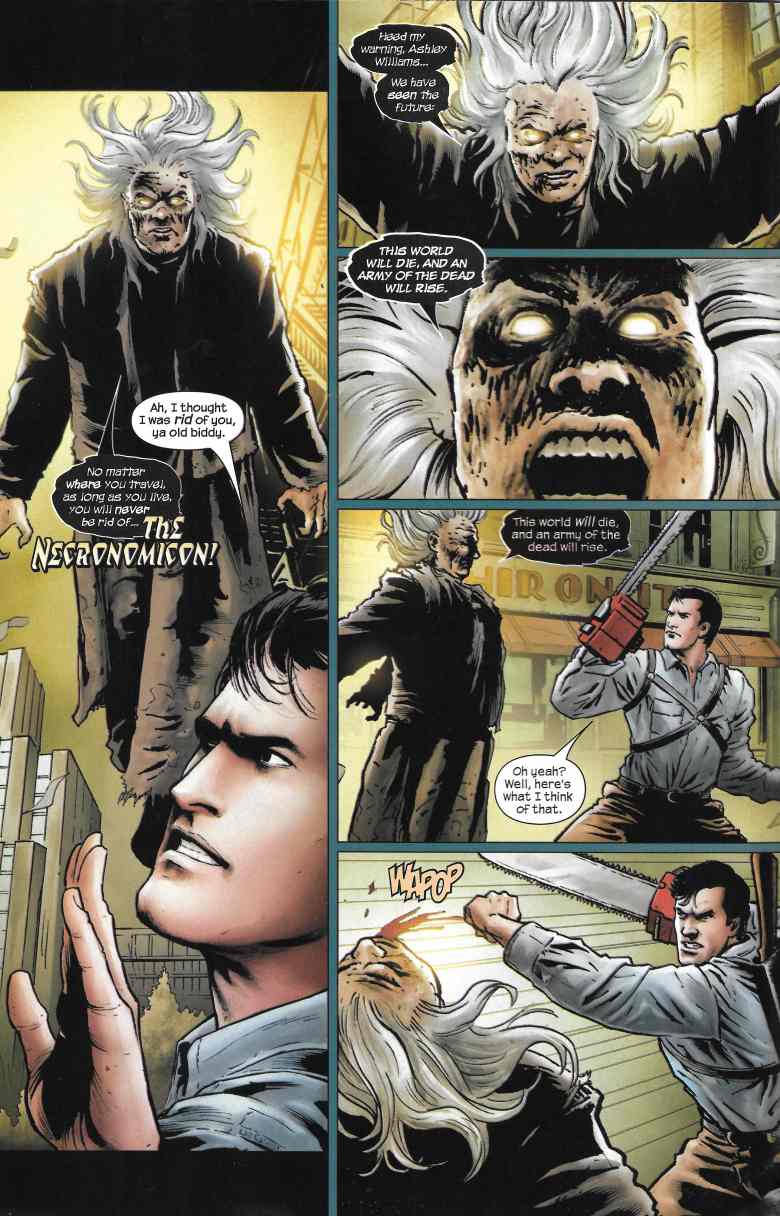 Yup. Deadites. And that prophecy makes it sound like Ash is going to have to fight his way through ANOTHER army of undead demons. As if we’d pay for anything less.

And I AM glad I paid for this book. The book gets Ash right from the very first panel, not an easy task. It seems I can sit back and relax. As for Ash? He’s got his work cut out for him, this outing. Starting with this Deadite. 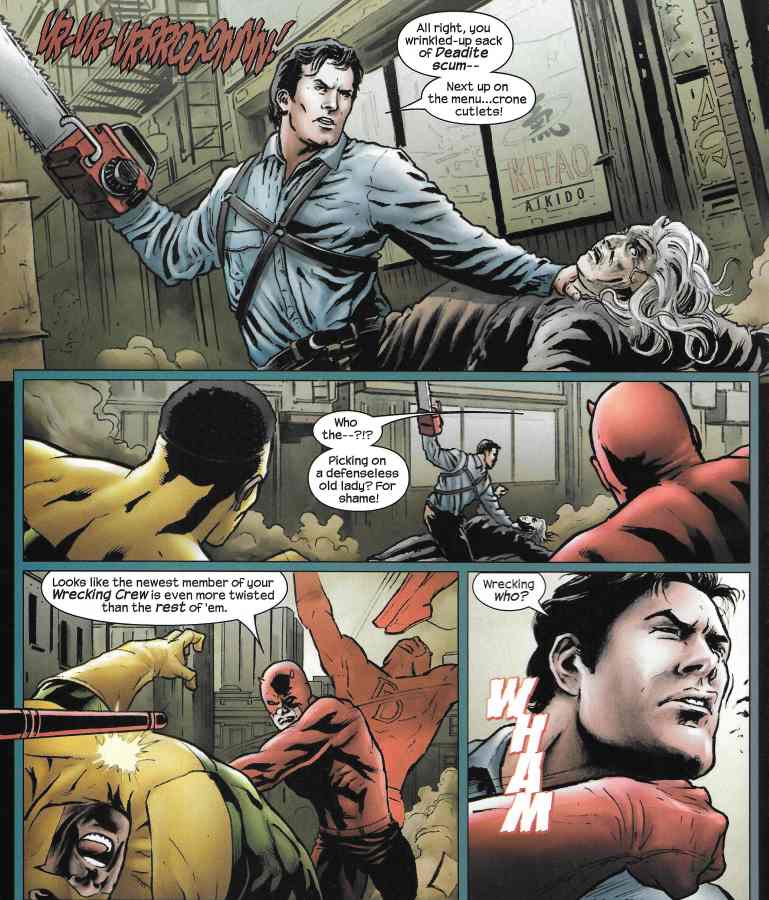 When who should take notice, but old horn-head himself, thinking Ash is one of the Wrecking Crew’s newest members. Ash’s distraction allows Thunderball to get the drop on old DD and leaves Ash thinking he has somehow saved the day. 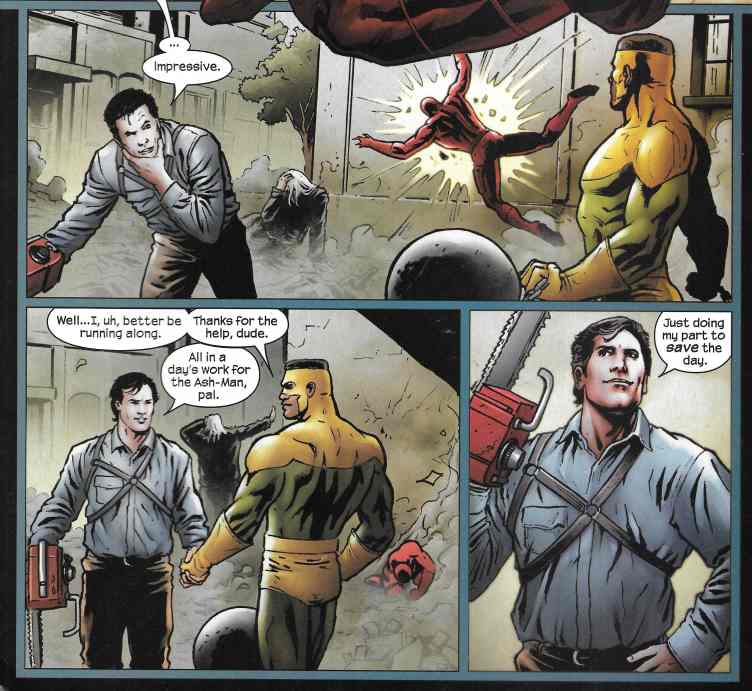 At least until the top of the next page, where Ash learns that he accidentally helped the bad guys. His reaction: “Oops.” Typical Ash. He also gains some much needed background about the universe he’s found himself in and where he needs to go to get some assistance. 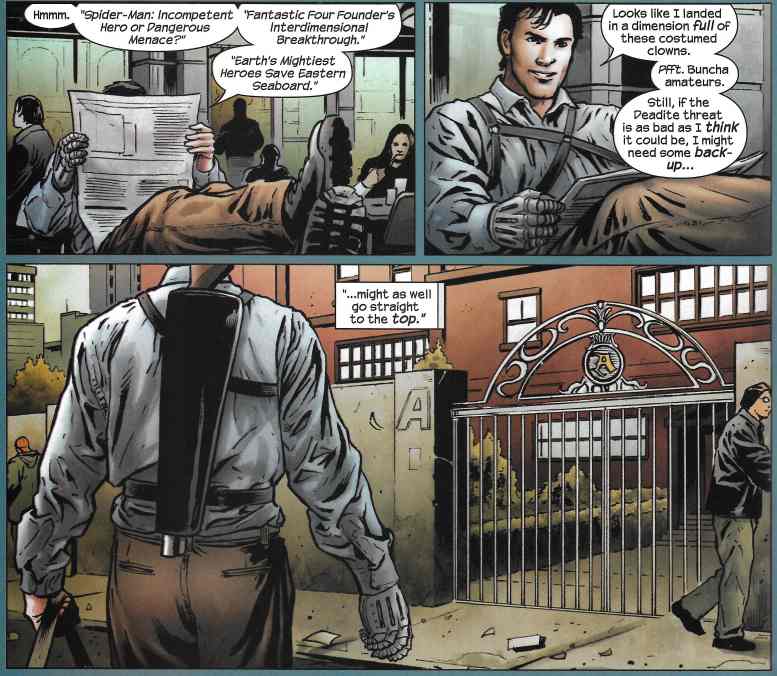 And of course, Ash being Ash, he goes about it entirely the wrong way. 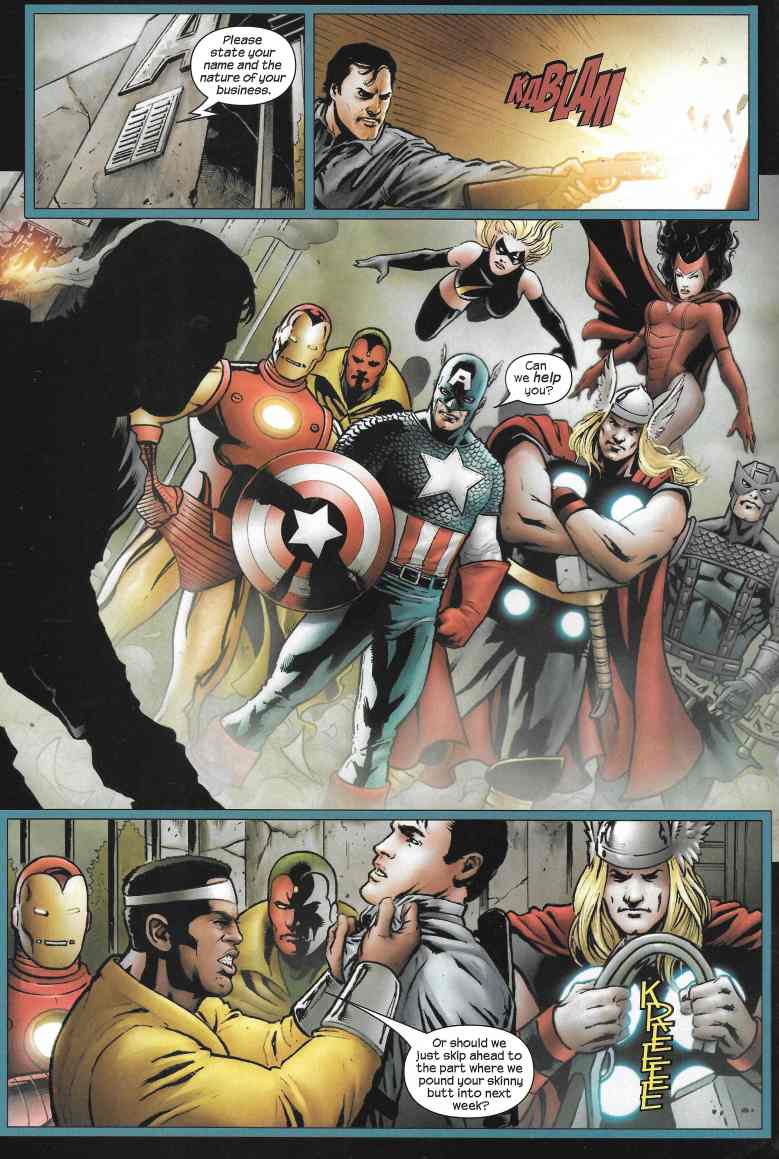 Even when the Avengers stop to listen, Ash doesn’t make his case in a rational fashion…but more in an “Ashional fashion” and that gets him “BAMF”ed away by the Scarlet Witch. 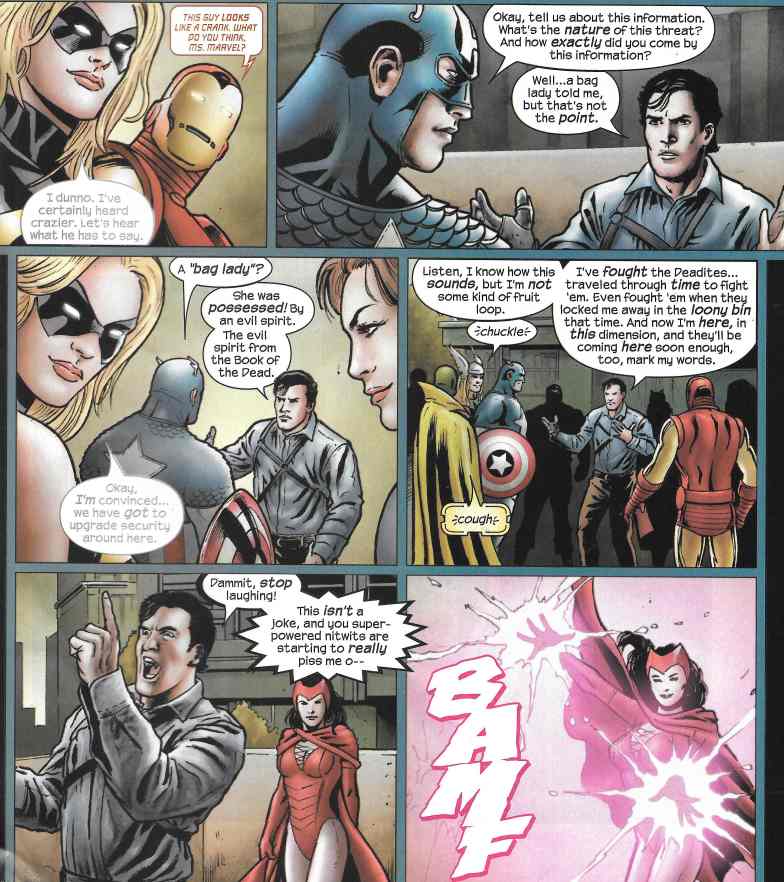 He ends up IN the Central Park duck pond, which gives him the perfect vantage at which to spy this event. An event that at the same instant Jarvis was warning the Avengers to look into. 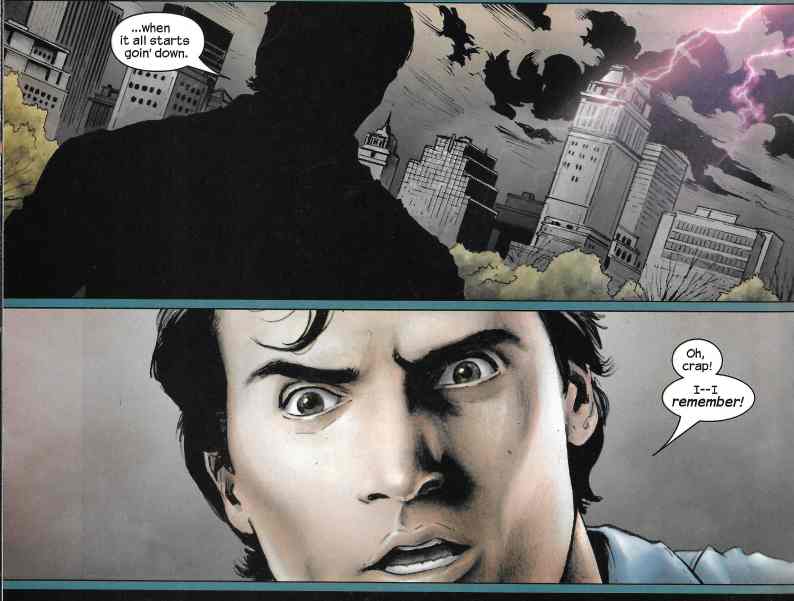 An event which jogs his brief memory of heaven… 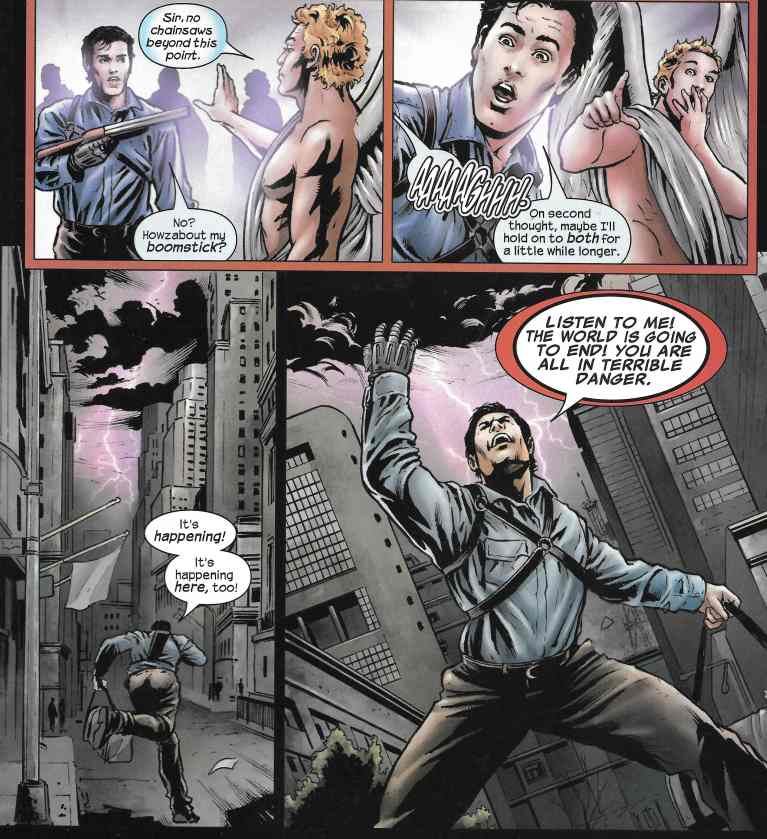 …and terrifies Ash even further, his frenzy ratcheted so high that the Avengers again pay him no heed and actually have Spider-Man… 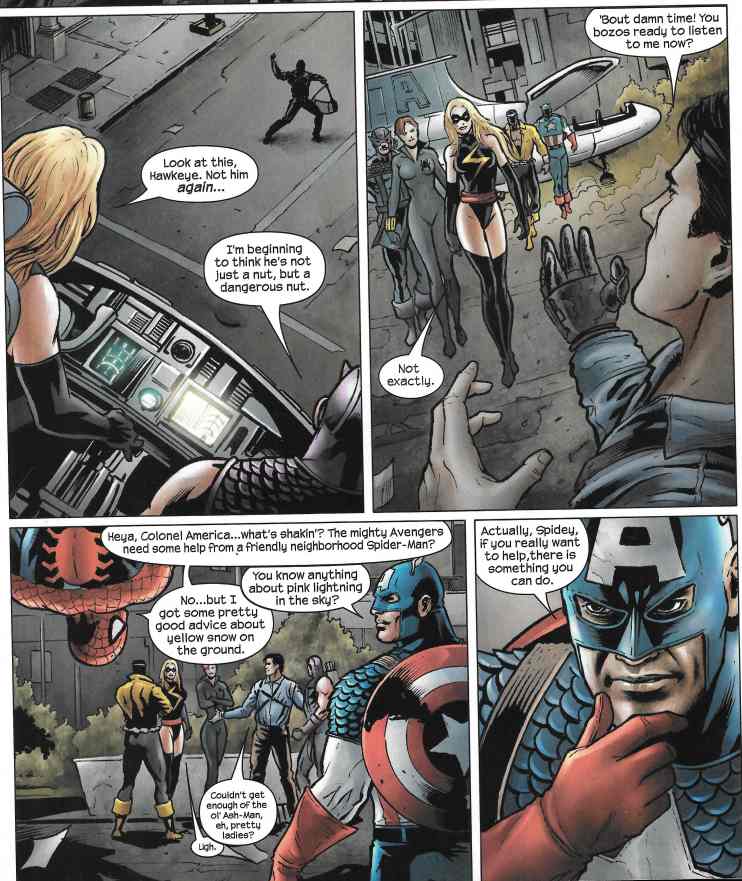 Well, see for yourself. 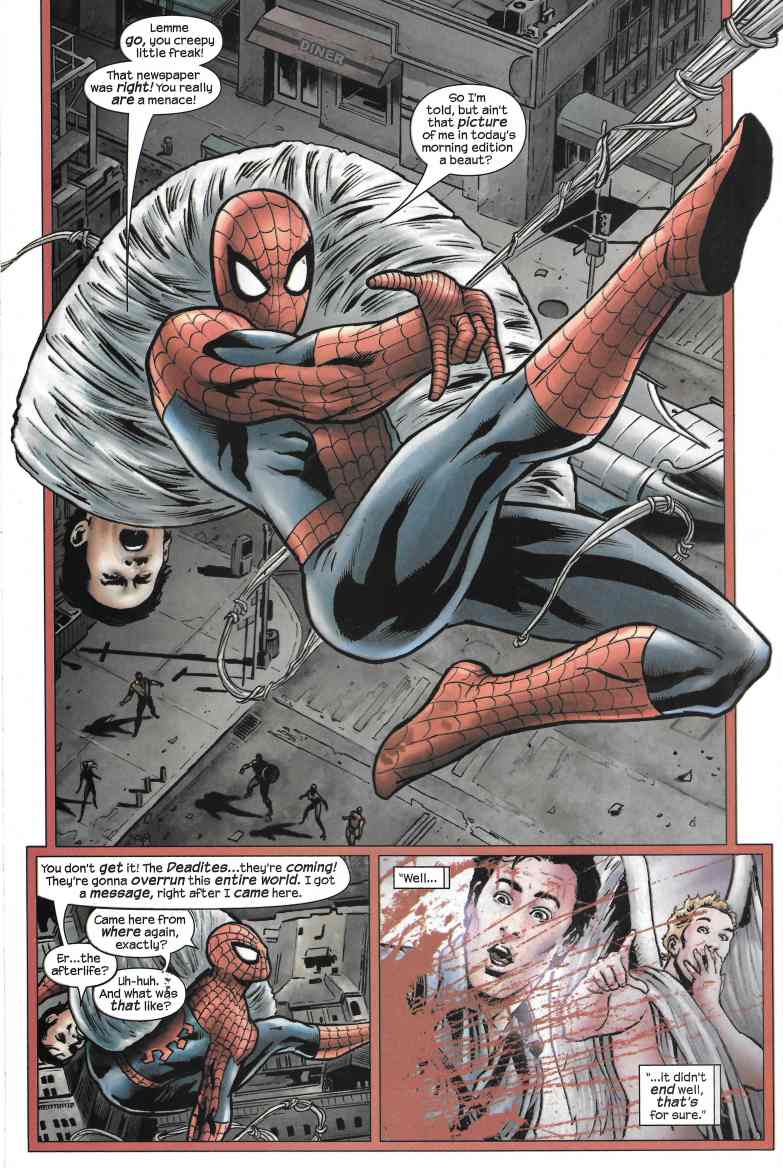 So trussed up, Ash starts to recount his brief trip to the afterlife. A trip that was interrupted by… 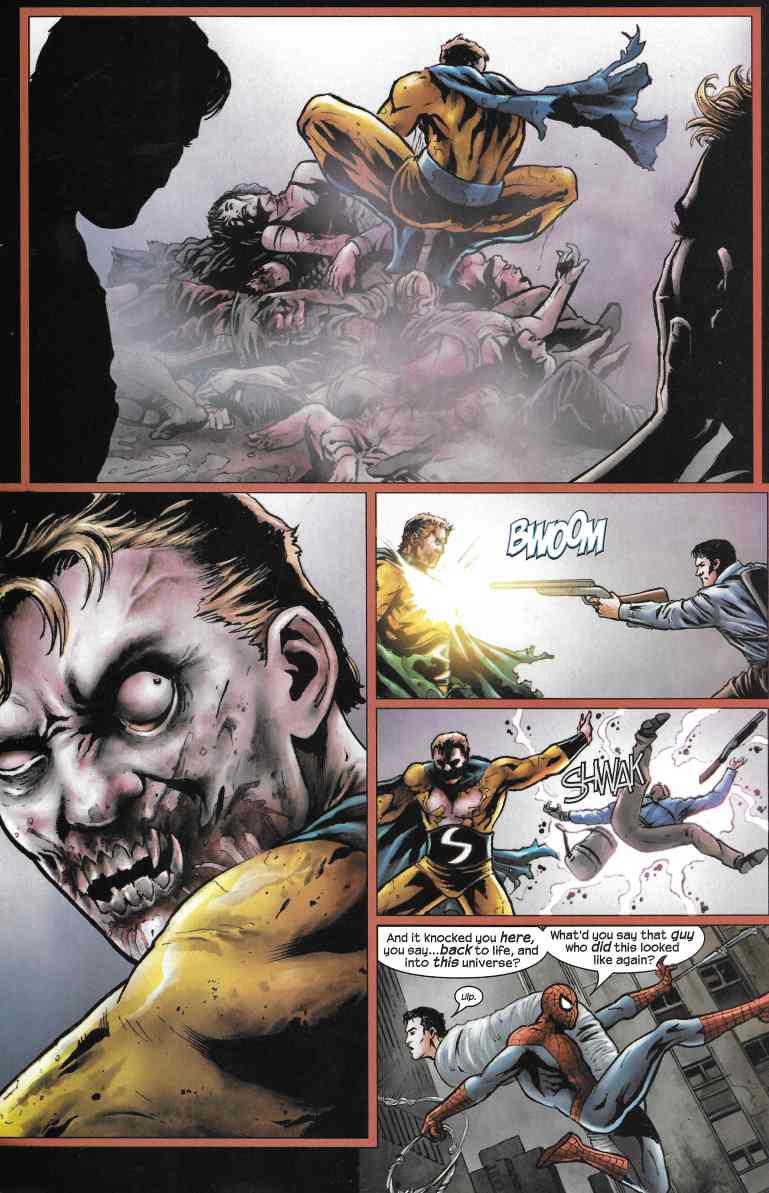 …an infected zombie Sentry (Ugh. Have I stated I hate this character? Yes? Well I DO!). The Sentry’s attack knocked Ash out of heaven and into the Marvel Universe is the point of all this. And now that it is through eating its way through the afterlife, The Sentry has made its way here as well.

And he’s already infected the Avengers… 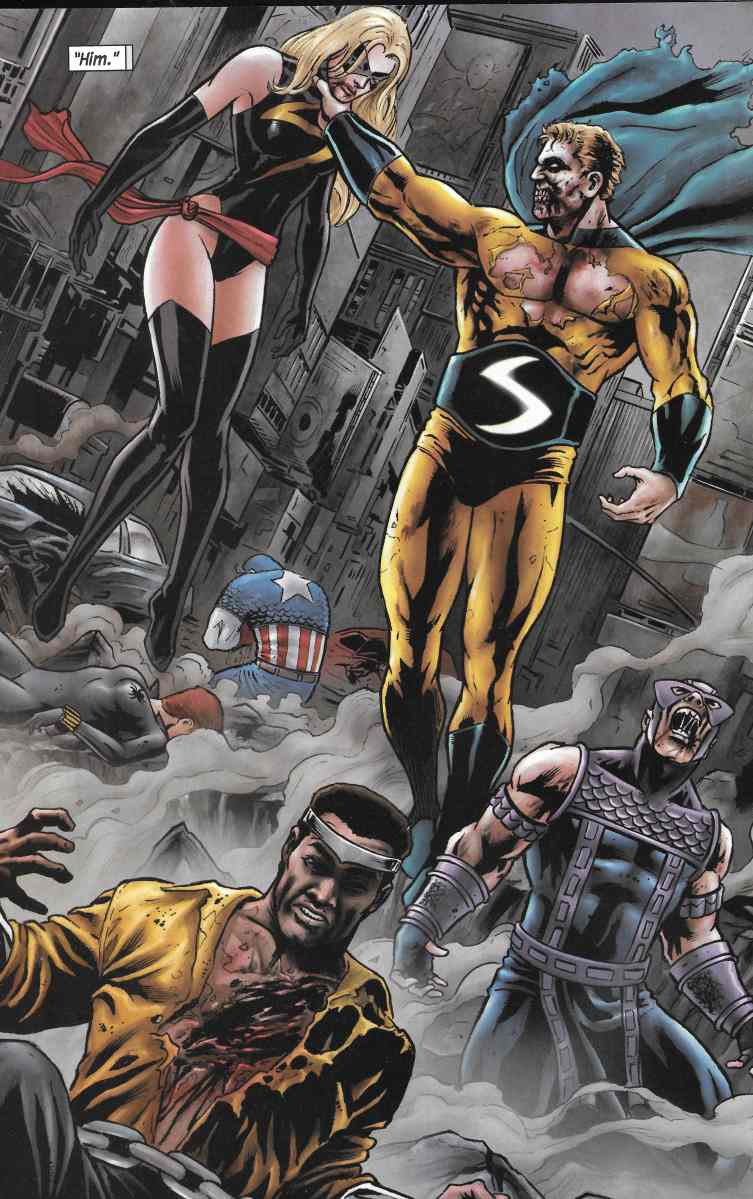 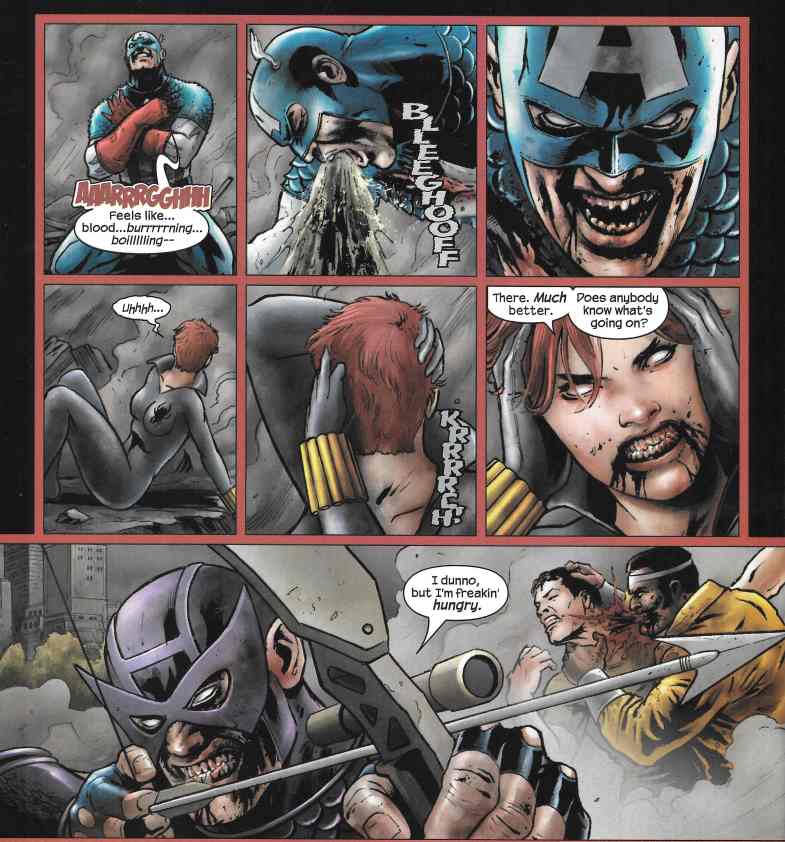 As well as back to Ash and Spidey’s reaction to seeing Hawkeye literally bite the top of a citizen’s head off. 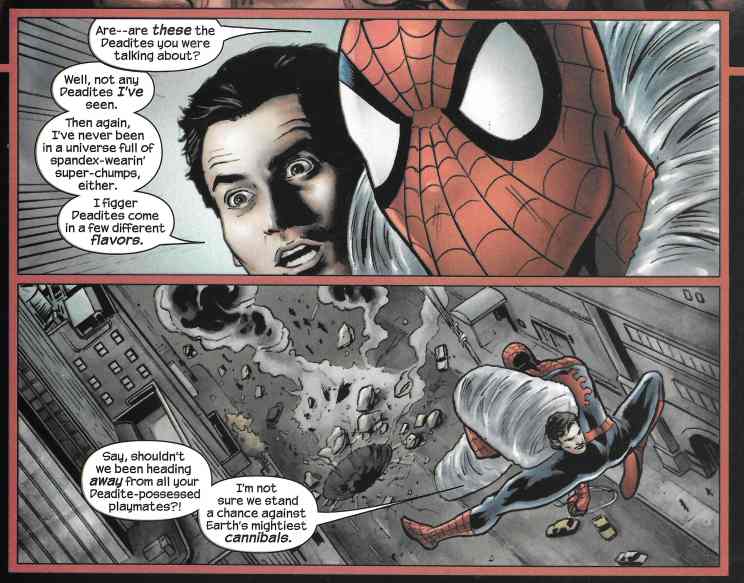 Spider-Man gets their attention, by zipping in and snagging a buxom blonde snack before Cap can have a nibble. As he whisks her to safety, Ash tries to talk sense into the ole webhead.

Including one of the few good ideas that Ash’s brain can muster up: Going after the book of the dead, the ever popular Necronomicon. Too bad Spidey doesn’t have the sense to evade Captain America’s teeth. 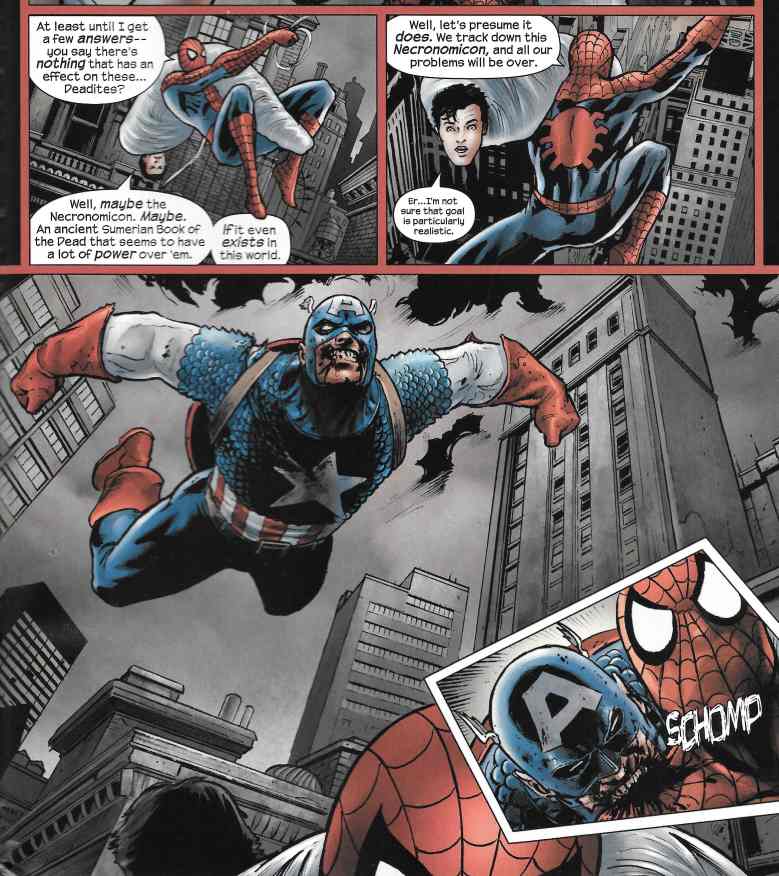 A chomp that lands Ash in some very hot water indeed… Well, this was…much better than expected? What can I truly say? I enjoyed it. The meshing of the two universes was handled well and logically. Aside from the minor continuity errors from the prior Marvel Zombies series, this book tracks well, hits the right notes and should satisfy both Evil Dead fans and Marvel Zombie fans.

Count that as recommendation to buy.
Posted by SonOfCthulhu at 2:06 AM