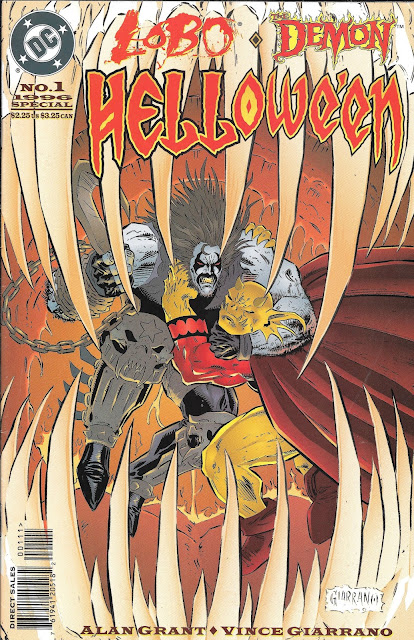 A Halloween issue where things quickly to straight to…

Here’s a odd little number from 1996: Alan Grant penning a team-up of two characters he was working with around the time: Lobo, the anti-heroic alien bounty hunter; and The Demon, Kirby’s rhyming hellspawned superhero. Art chores fell on the ever-amazing Vince Giarrano, a crapbox favorite since his Redblade ninja demon opus first found its way into my grubby little hands. (You need to see what he’s up to now. They guy’s painted art blows me away!)

This is an odd, unexpected team-up, aliens and demons not usually sharing page space, and Grant comes up with a decent premise but fumbles a bit in story execution at one point (we’ll get to that). Giarrano’s art captures these two masterfully however, and the book could coast on his graphics alone.

I’m going to take us into the issue now, with one final caveat, I may have judged this one too harshly because it contains Etrigan, a character I respect but find impossibly hard to read. It’s the rhyming that throws me off, because instead of reading him through, I find myself trying to find a consistent beat or rhythm to his speech. And when you are doing that, it is hard to really enjoy the writing. Some of this comes down to placement, as cramming text into a box is an impossibly tight task if you don’t want to cover up someone’s art, so you end up with no visual clues to help you figure End Rhymes or Slant Rhymes. It’s all just a mess to me first read-through and that’s a crying shame.

Let’s see if a second run at it allows me to enjoy it more?

We begin with Etrigan’s narration over Lobo being Lobo by destroying a cyclopean, crystal-eyed ancient statue on the moon. 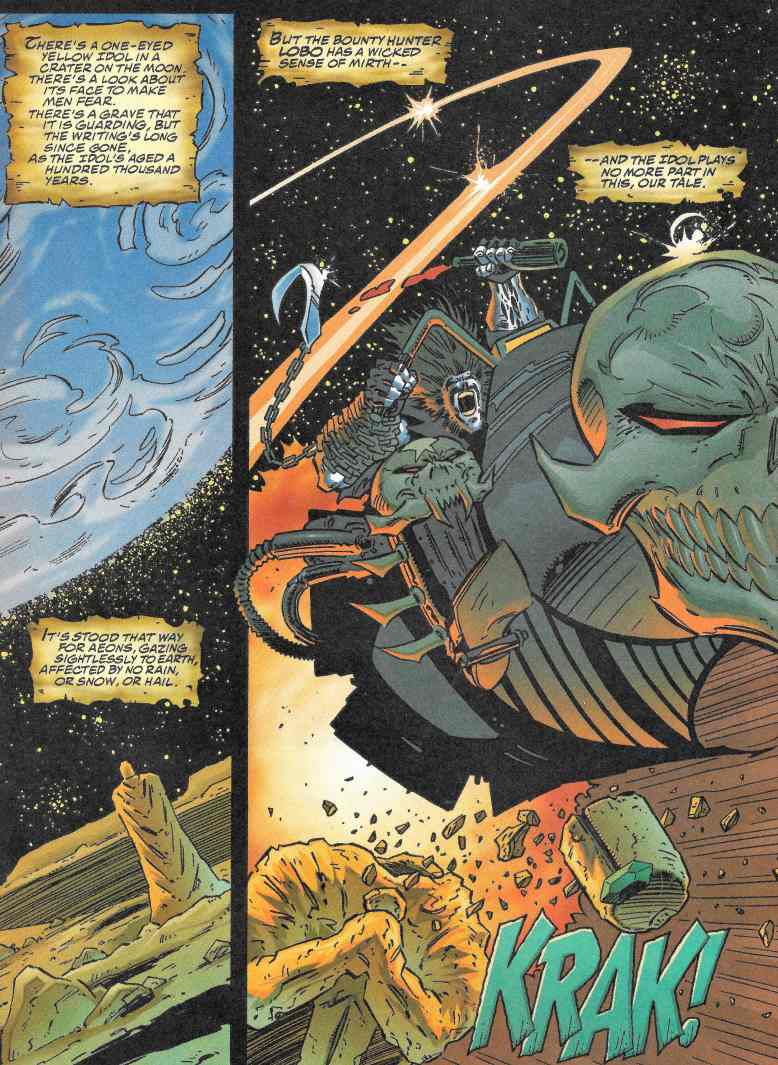 And while the narration states that the idol doesn’t play any more part in the tale, it kind of does. You’ll see as we go along. First it works as an impromptu Hamlet prop for Lobo… 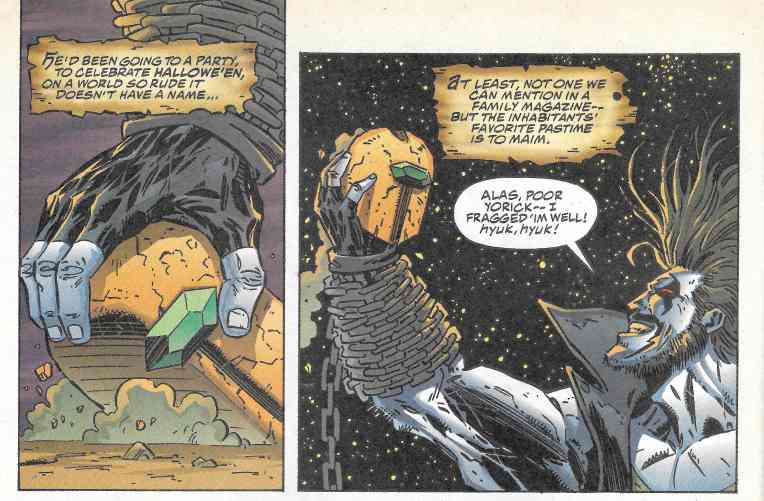 …and then as a skeet target while he waits. 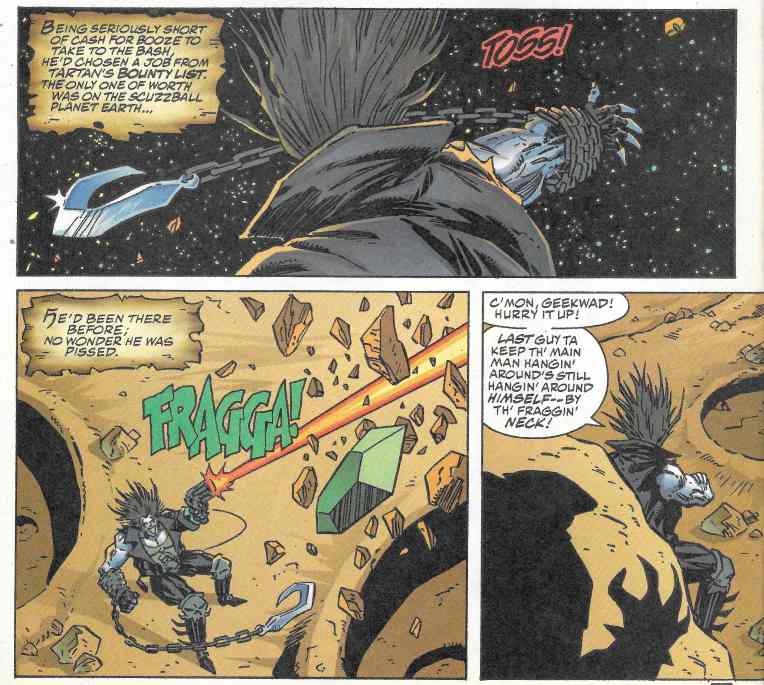 Who exactly is he waiting for, you might ask? 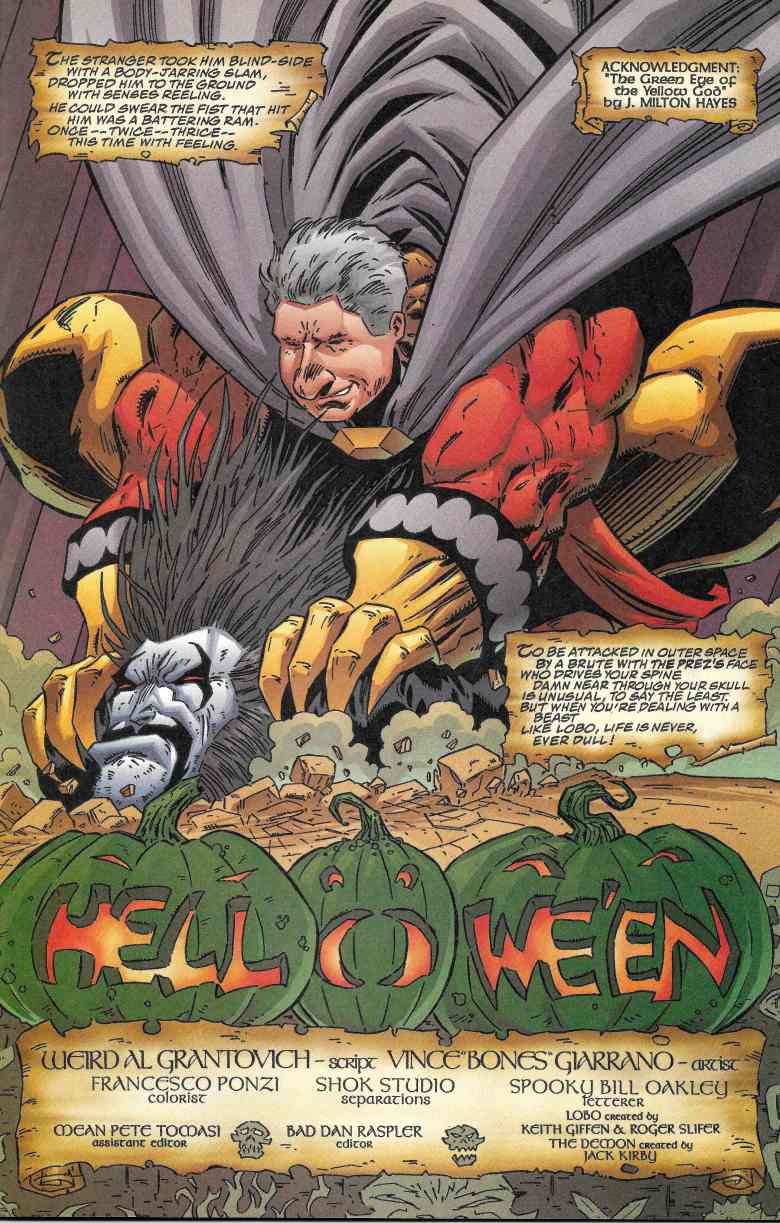 Etrigan The Demon, of course. The Bill Clinton mask is a bit unexpected, but I assume placed there to allow for a good rhyme. Love the panels here and all the little flourishes Giarrano adds to the page.

Grant also credits his idea for this to a story called “The Green Eye of the Yellow God” by J. Milton Hayes, a neat little ditty that actually is in the public domain. Feast your Halloween spirits on this little tale of idols, cults, and deeds most dark.

The gist of that poem has little to do here other than form the introduction and the idea of a one-eyed statue.

Back to our tale though, as Lobo and Etrigan formally greet each other and Lobo comes to a realization… 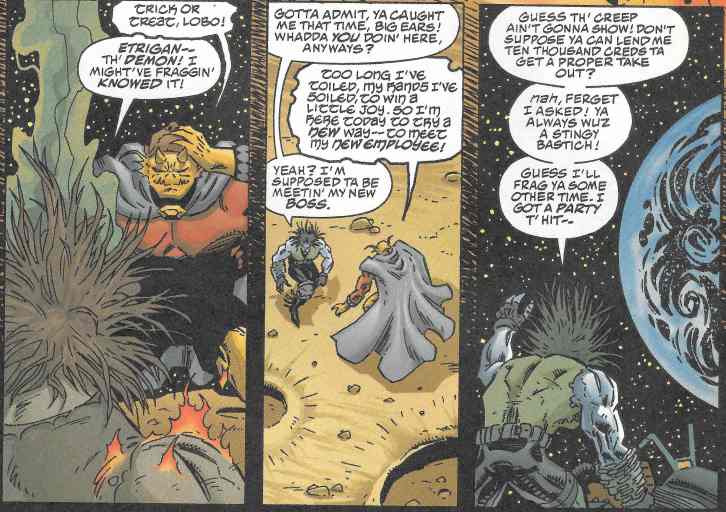 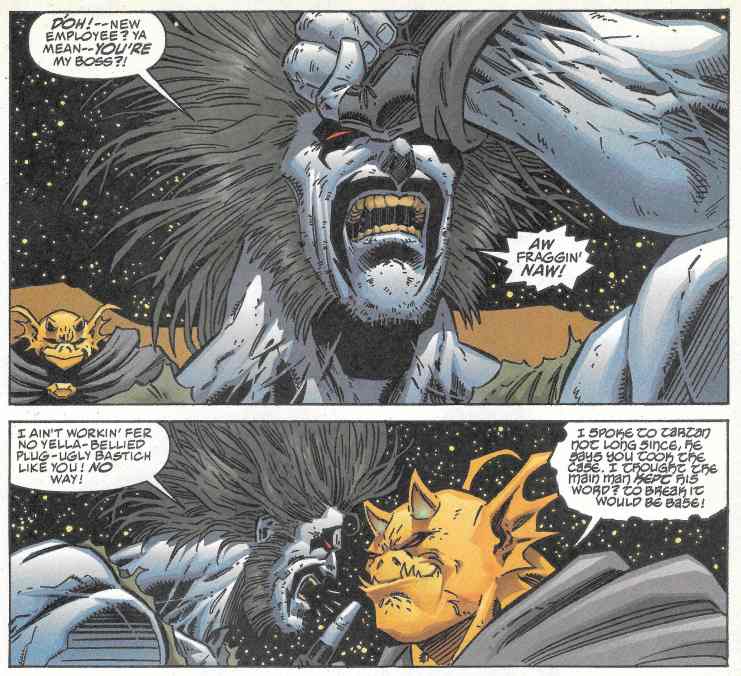 Having pulled one over on him, Lobo realizes he can’t back out of his “deal” with The Demon. He does want to know what the job is… 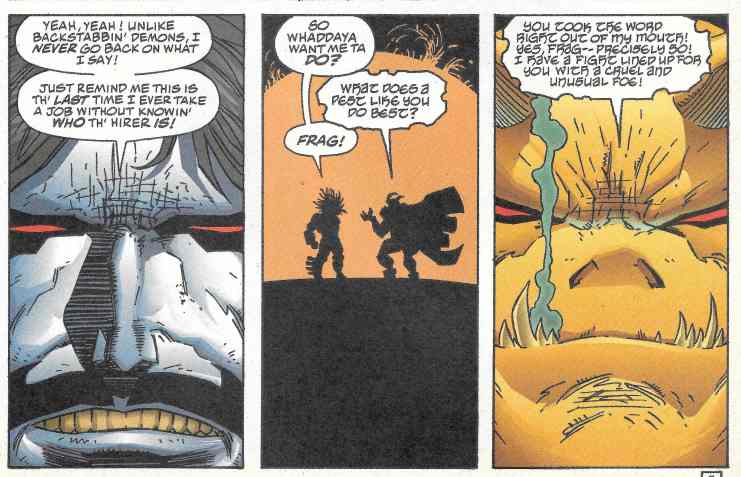 Which starts an over long and complex story about exactly WHO it is that Lobo will be fragging for Etrigan. We get these lovely Grant/Giarrano panels that explains the starting of a sun-worshipper cult by early man… 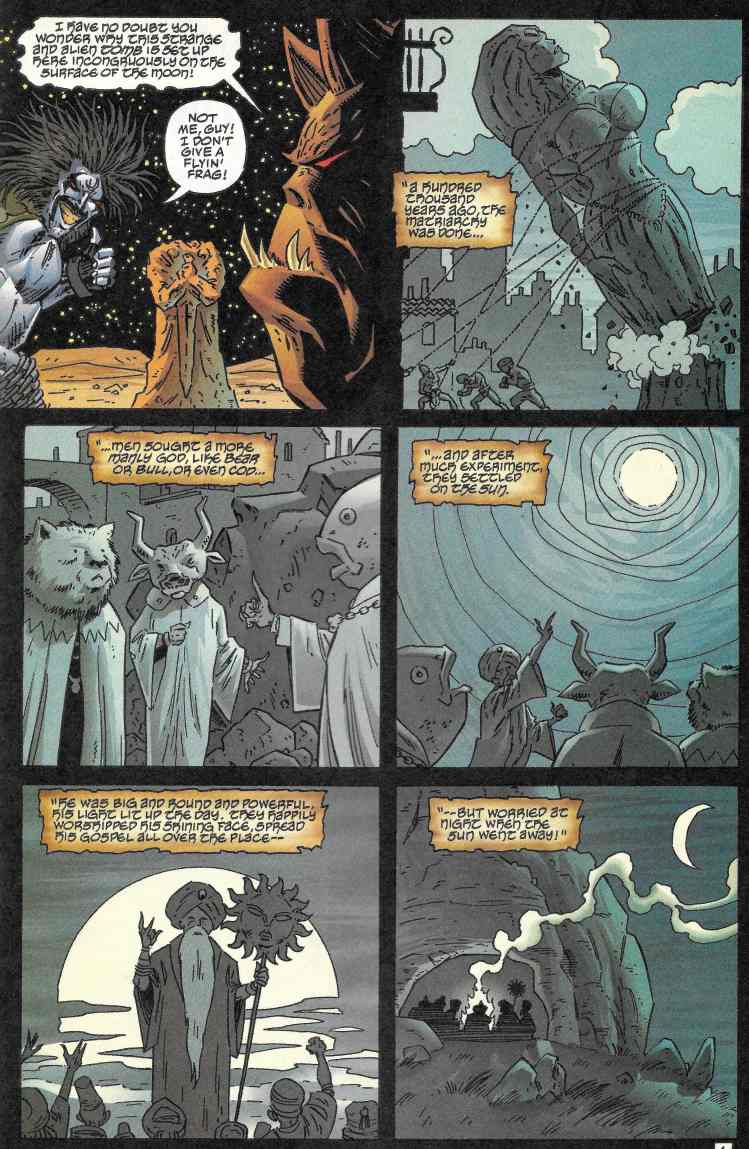 Lobo is enthralled, by all this. No. Strike that. “Bored.” Lobo is bored to tears by all this. Etrigan carries on, however, and finally gets around to the creature we think will be Lobo’s frag-target. That would be this evil shadow-of-the-sun dragon thing called Malak Karu. But our evil darkness creature isn’t quite real…yet! 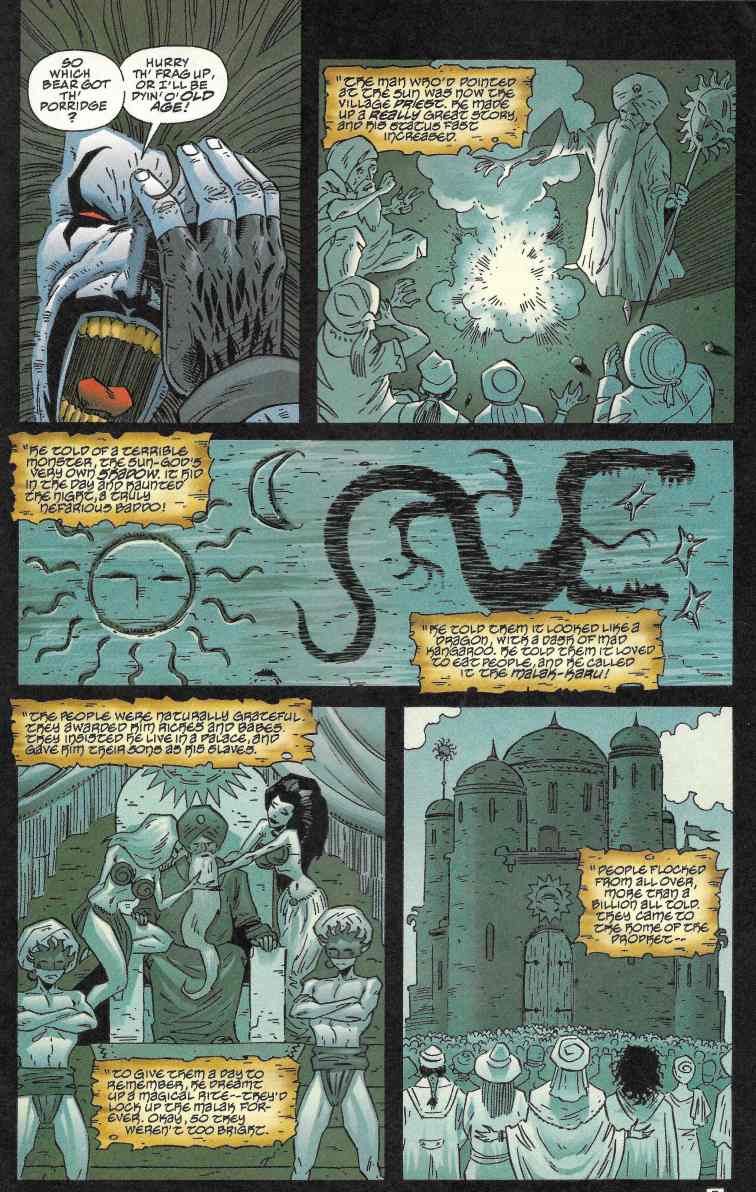 That’s not all. He comes with a guardian forged in solid gold. It’s a matching set deal. 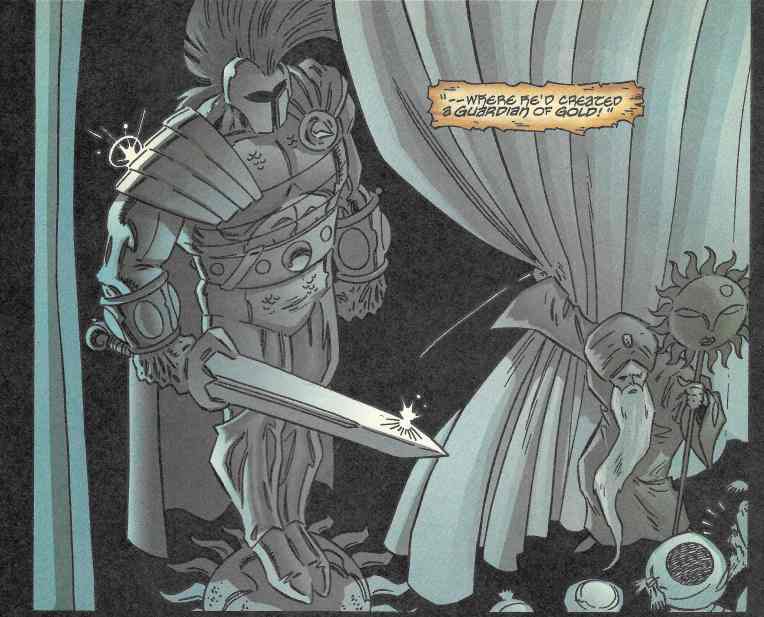 Lobo is way ahead of things here as he finishes the story for Etrigan, explaining how the worshiper’s fears and wishes brought Malak Karu to life, their statuesque statue took it on and it’s been imprisoned for eons until this very evening, Halloween night, when it gets a chance to break free and wreck havok. 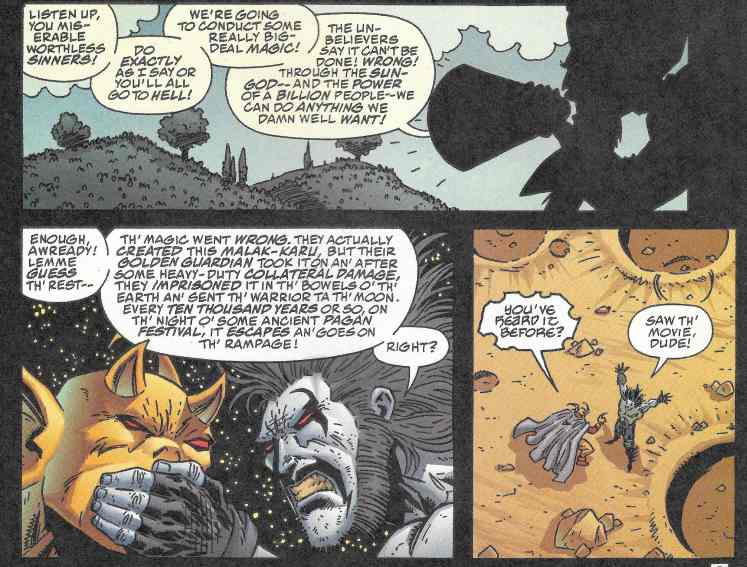 Have to say it again: Giarrano does some stupendous work here. The backgrounds and foregrounds of this “all the myths lead to keeping Malak Karu in chains” is just great. 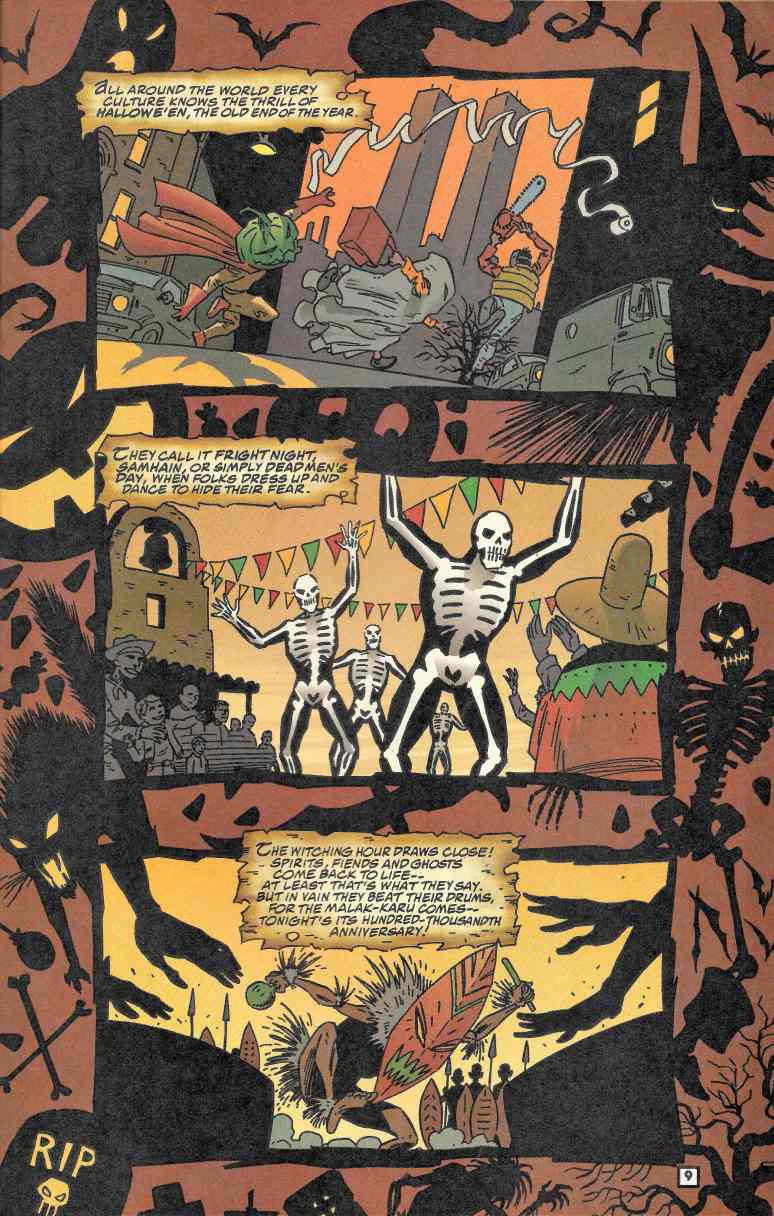 But all these good parties have to end at some time, and that some time is right about now… 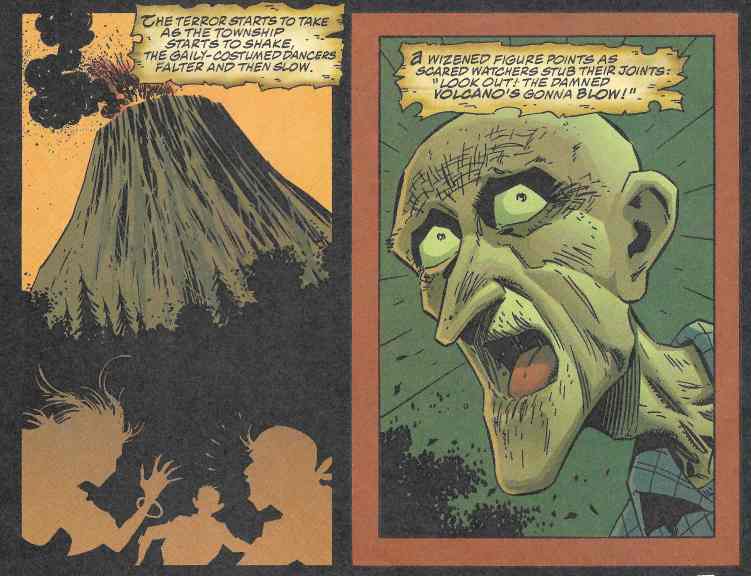 With an explosive reveal, Malak Karu bursts on to the scene and rapidly ascends to the heavens. 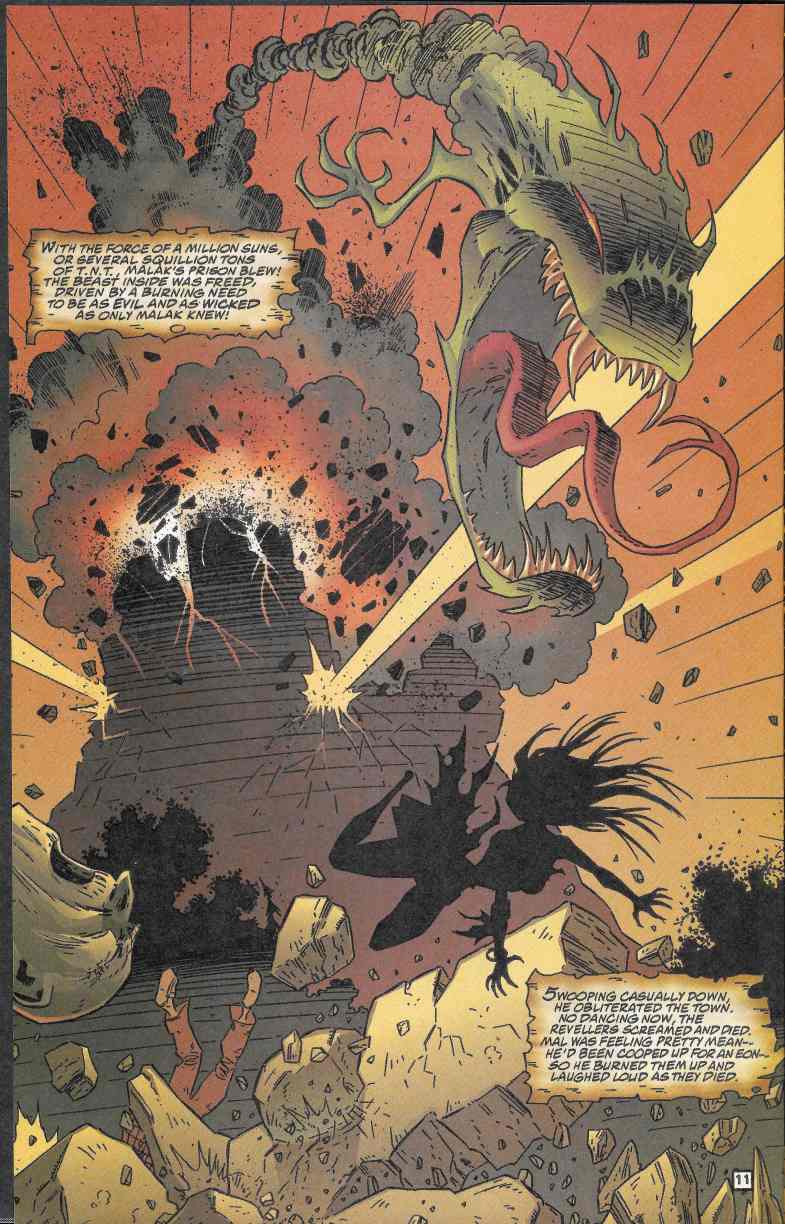 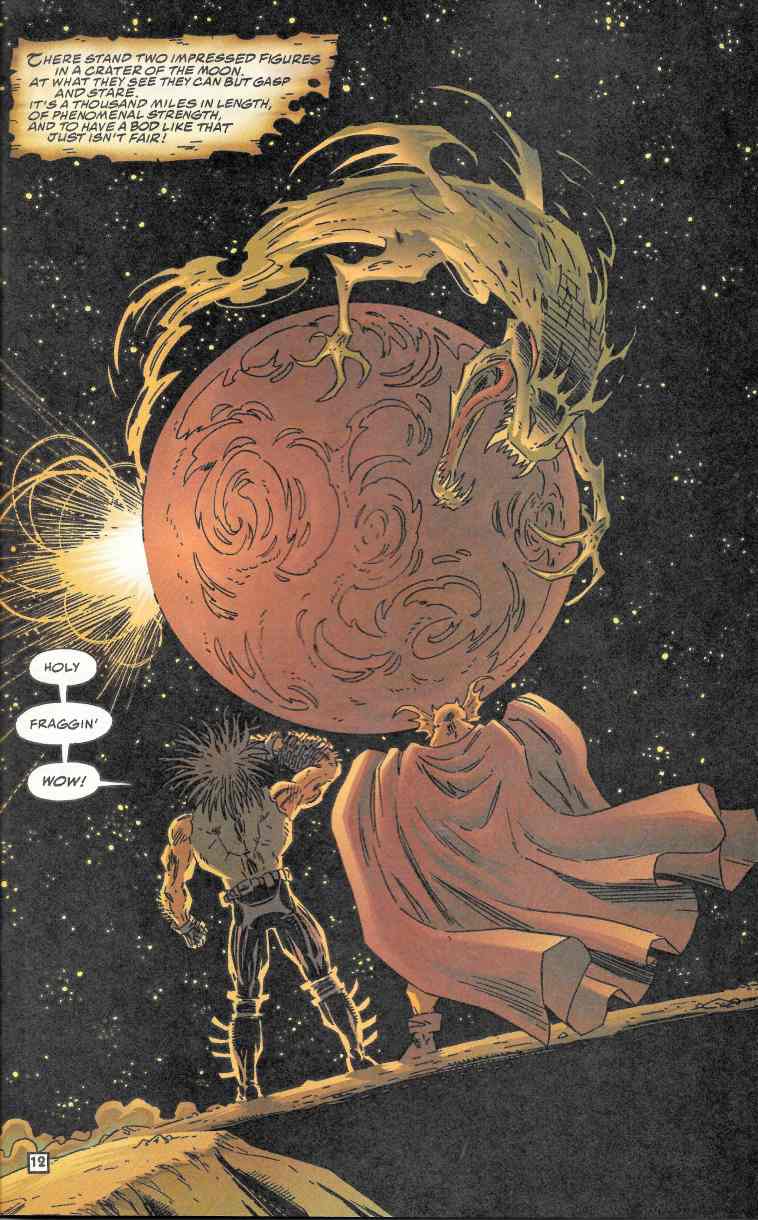 And in a twist I’m still unraveling, The Demon sets Lobo against, not the giant shadow dragon of evil as expected, but instead marks as the foe of the hour the Guardian who is supposed to defeat Malak Karu. The very words “to see the Earth destroyed is to say you have enjoyed” escape Etrigan’s lips and I am seriously scratching my head over this one. 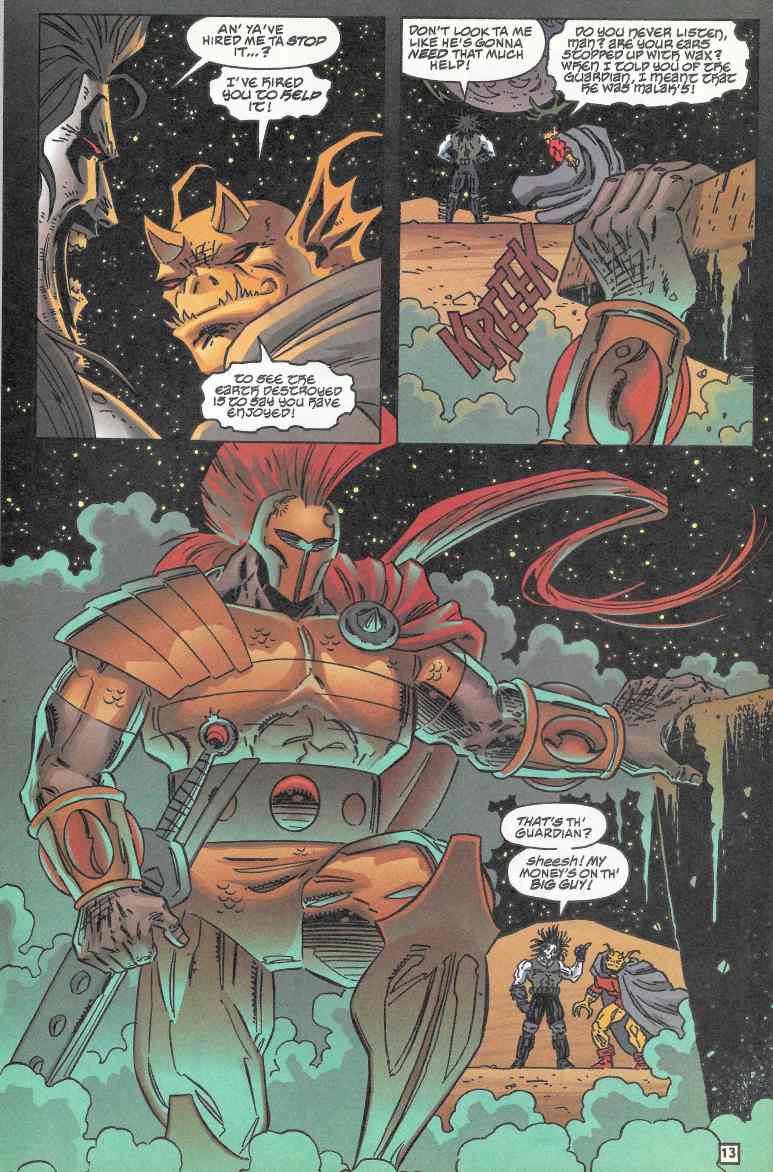 While Lobo (and large portions of the audience) are pondering this strange twist of fate, the Guardian gets down to business by unsheathing his glowing blue blade and zapping Malak Karu from afar. Etrigan gives some lame-ass excuse as to why he needs Lobo, too. 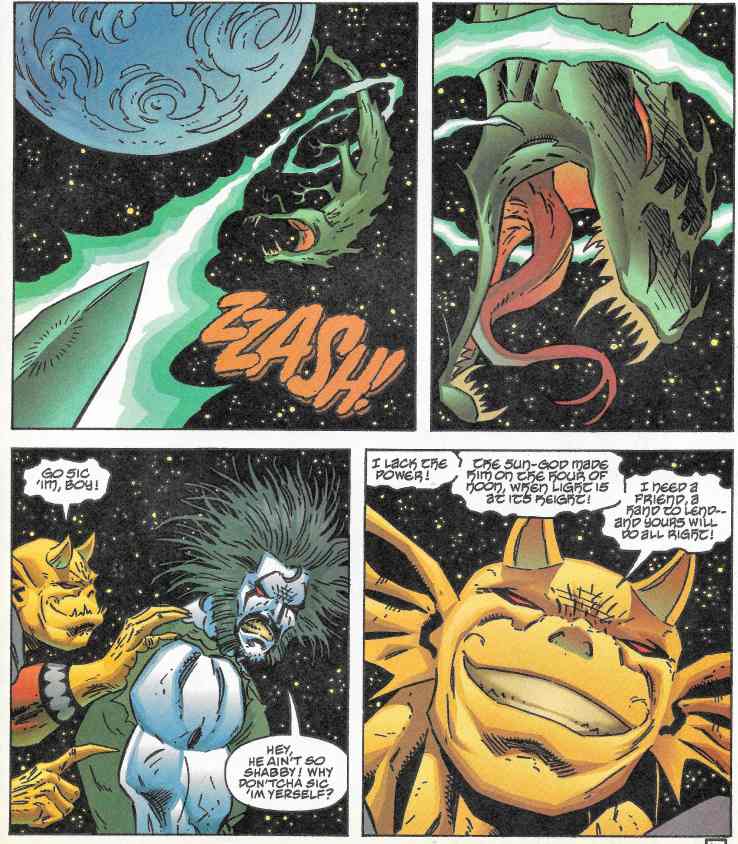 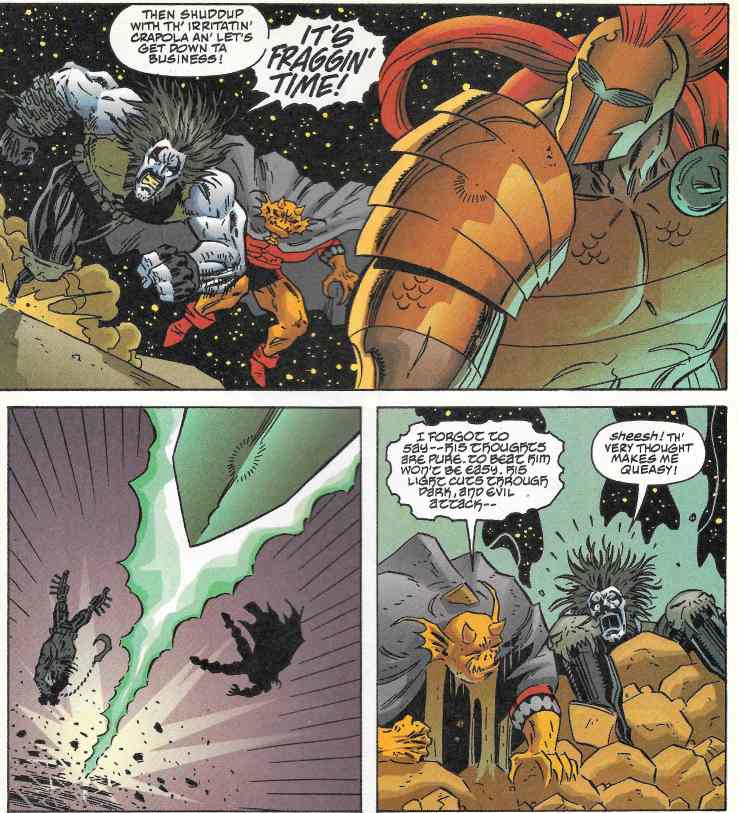 The battle is great stuff, but we really are close on page count at this point in the book and we have a lot of ground to cover. So only one page of Giarrano cutting all the way loose… 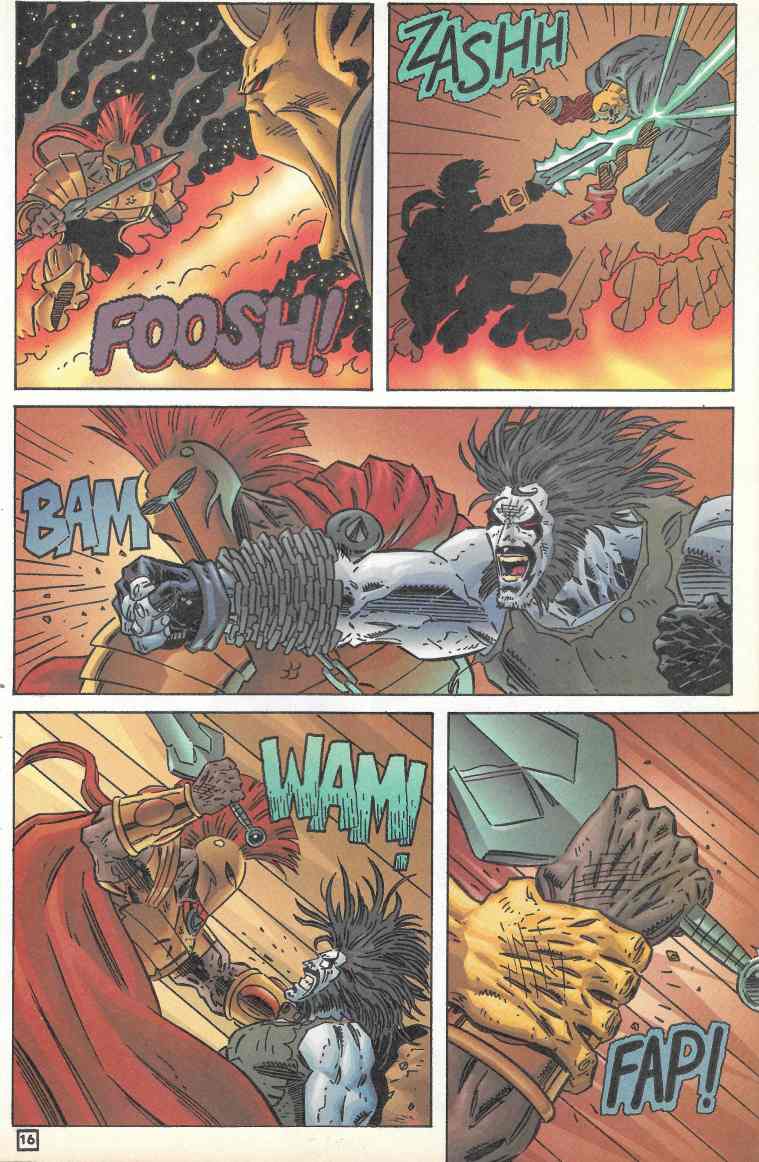 …and then the Guardian takes a Lobo-hook to the forehead. As for Malak Karu…you’d think an evil shadow dragon would be grateful. 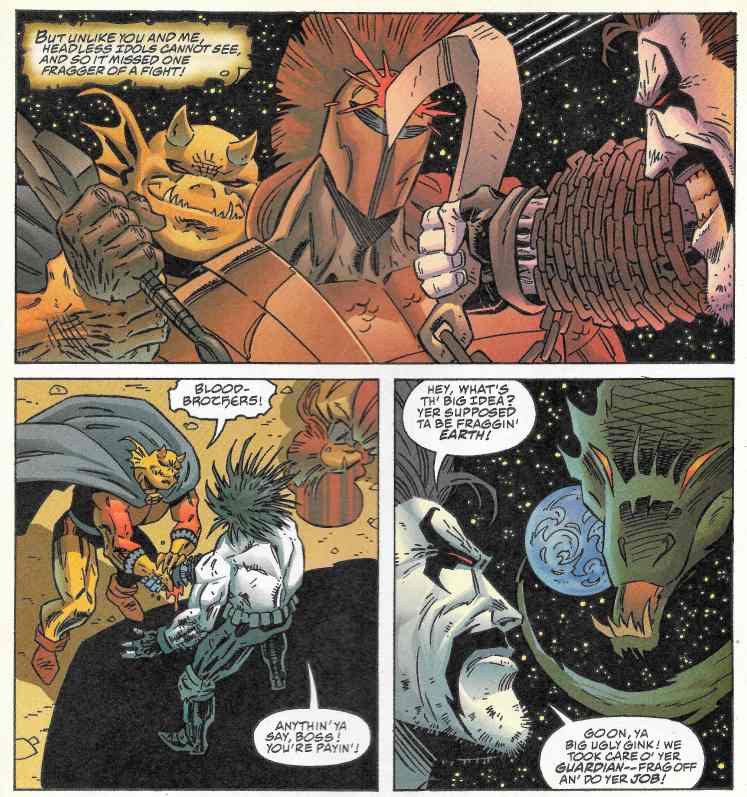 But that doesn’t appear to be the case. As for what can stop Malak Karu from digesting our two “heroes,” Etrigan explains that the only thing that will stop him is the eye of the idol which is actually a gem of pure force. And Lobo is forced to admit that he destroyed the idol’s head, force gem and all. 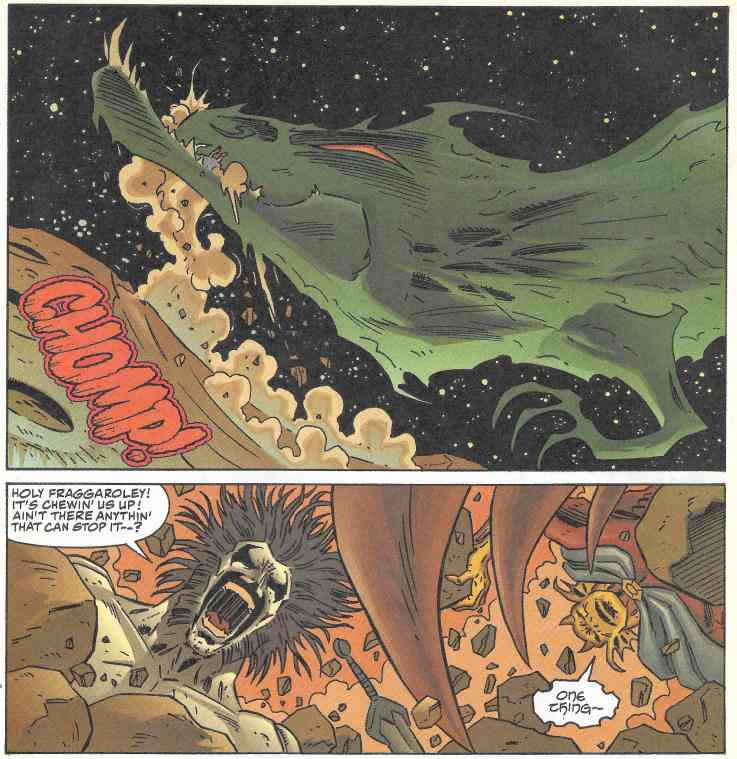 For once we hear Lobo’s standard curse as more of a location than as an expletive. They are momentarily saved by Lobo’s hook and chain, but even that looks like a very short-term thing. 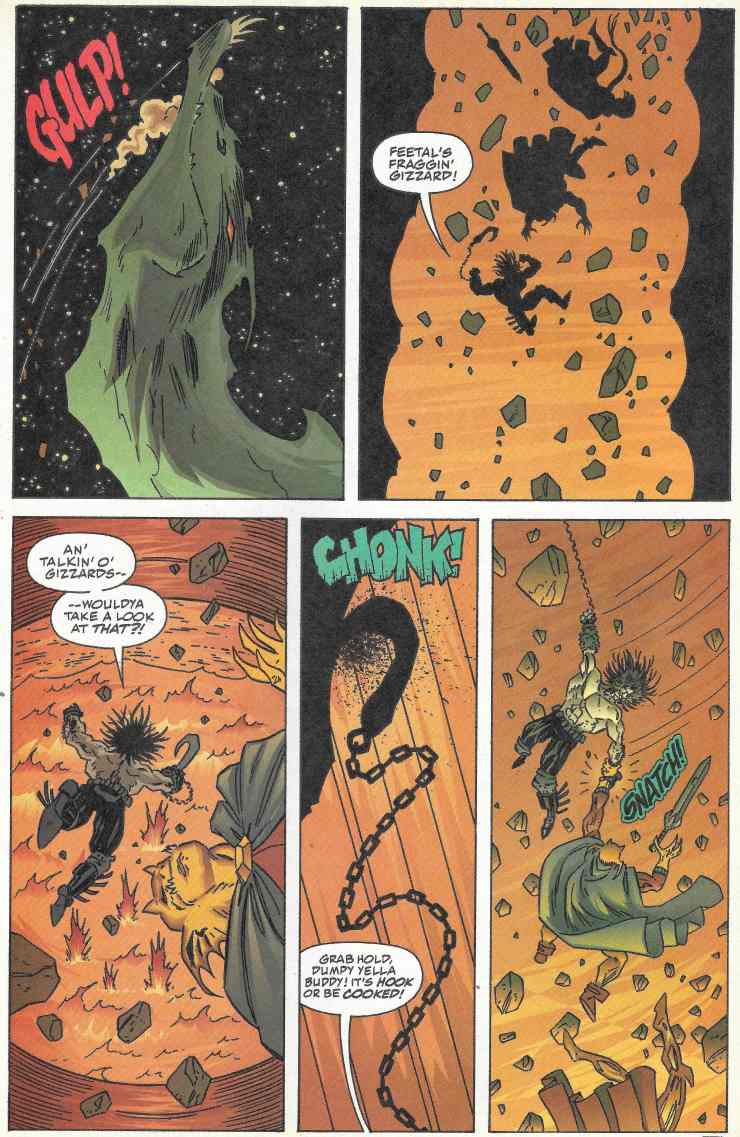 As the giant beastie turns and heads back to raze Earth, our two heroes dangle helplessly over a pit of lava-like stomach acid. This looks bad, but Etrigan has a plan… 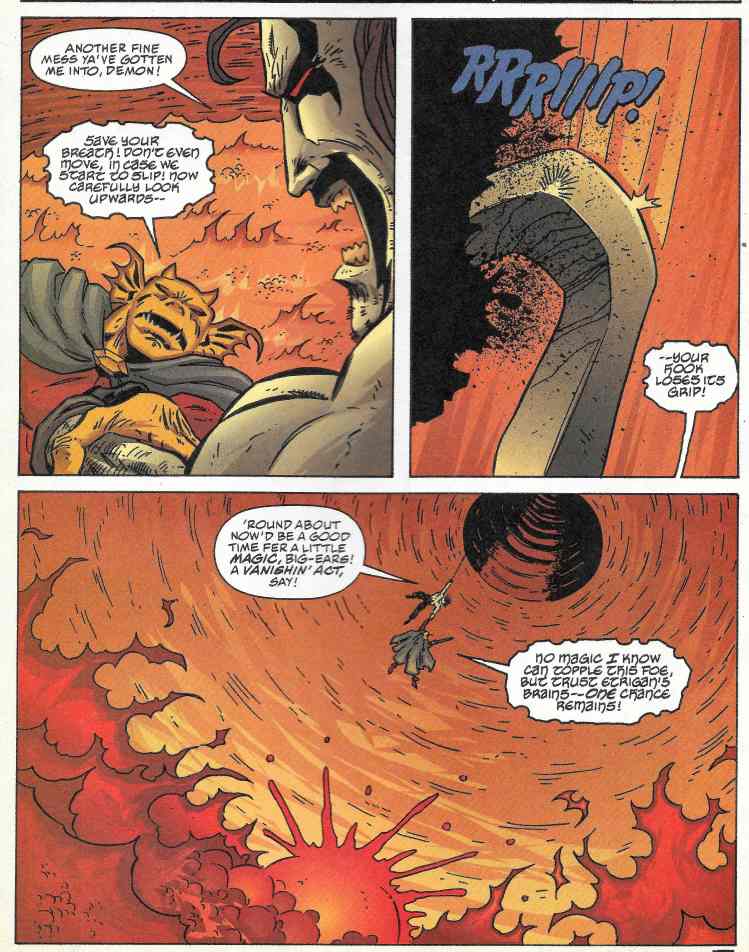 See he snagged the Guardian’s sword back a couple pages ago and thinks that he can use it on the shadow dragon. All he needs are some good, pure, innocent thoughts to power it up. 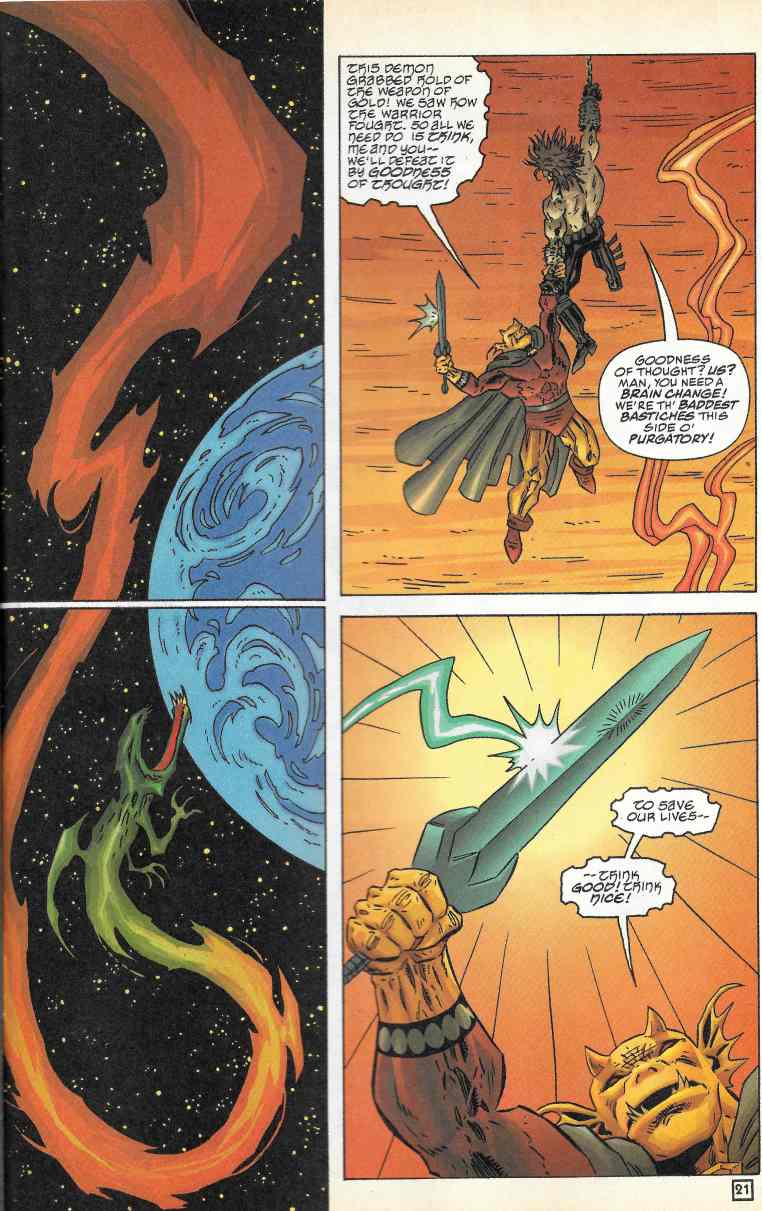 Who the hell am I kidding? “Good, pure, innocent thoughts?” From Lobo and The Demon? They are so boned!

And so is Earth if they don’t make this work. Luckily there is ONE thing that can save them. Something Etrigan figures out about Lobo in short order… 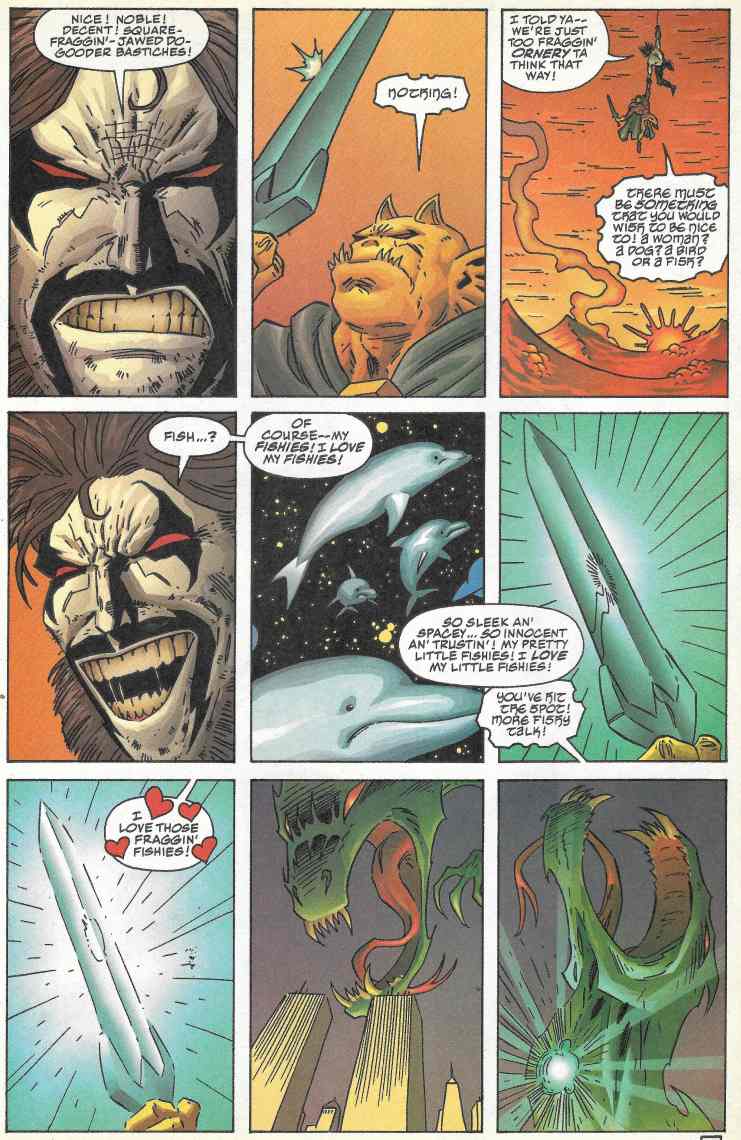 And bingo! That’s enough to vanquish Malak Karu from the inside, moments before it decimates a very pre-9/11 Manhattan. Nice work, yah bastiches! 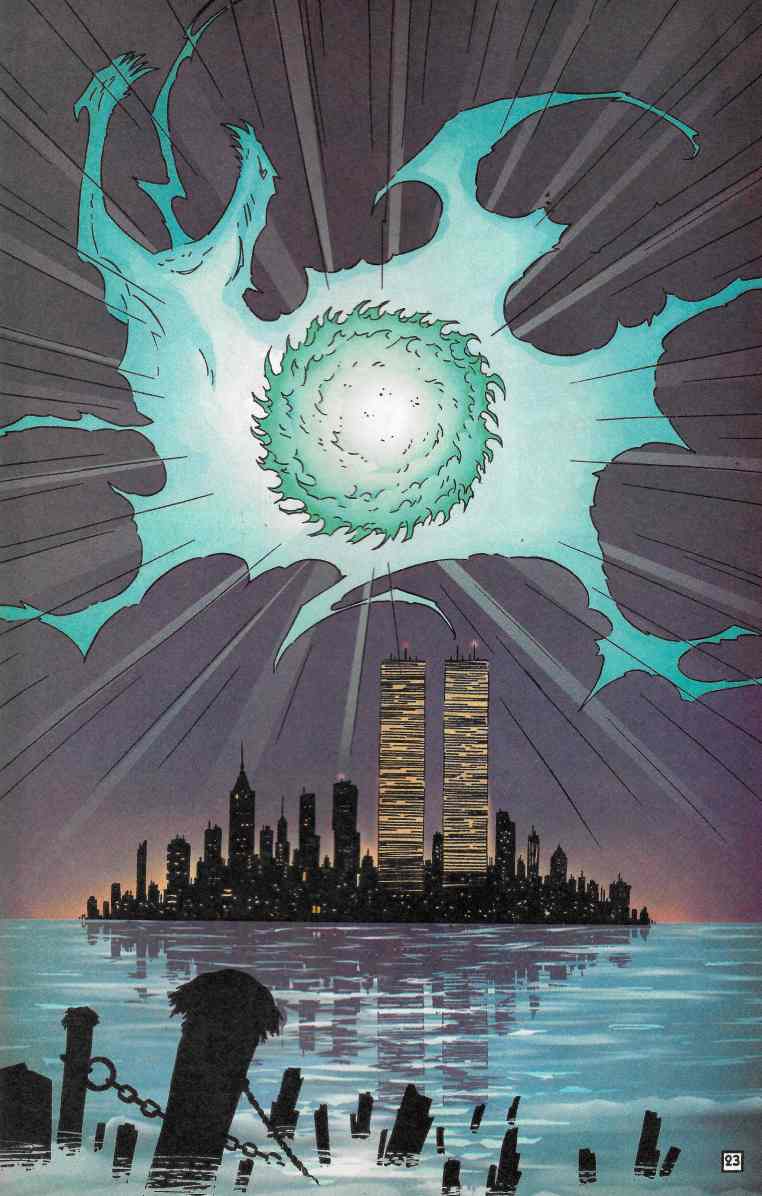 Of course our ending is a bit bittersweet, or make that just bitter, as out two protagonists are brought to blows over the whole affair. It couldn’t happen to a pair of more ornery anti-heroes. 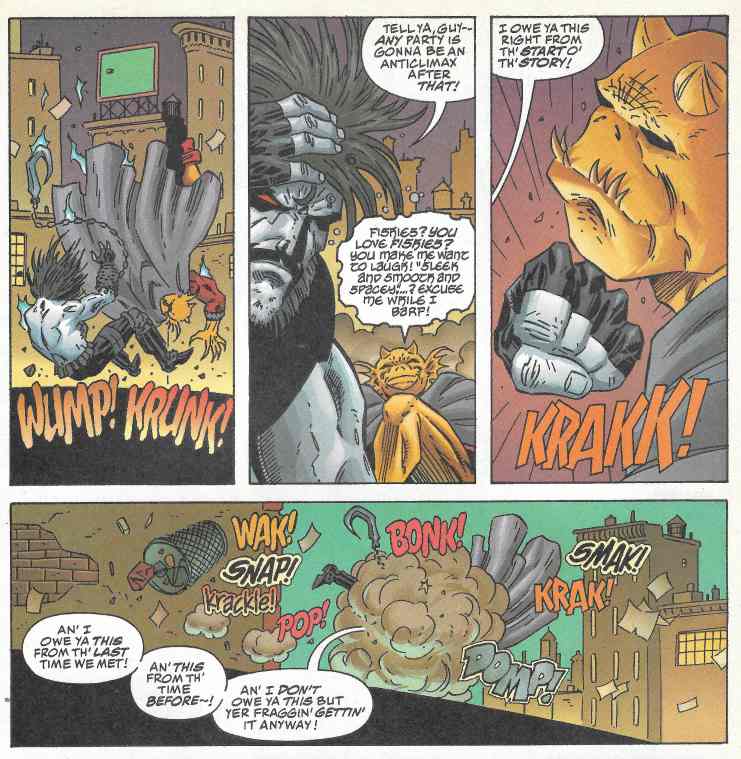 This was fun, even with the odd twist to Etrigan’s character in the middle. The art was amazing and even the rhyming didn’t bother me so much. Grant knew how to emphasis the way both characters could work together yet both still remaining true to who they are. An enjoyable read. Makes me want to go back through the Grant Lobo and The Demon books even more now.
Posted by SonOfCthulhu at 2:16 AM