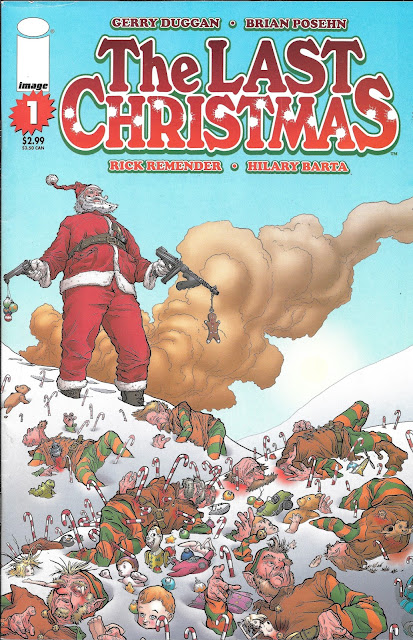 Pretty much that WHAM! Song in comic book form

There are covers that beg to jump into the Crapbox, and Geof Darrow’s cover to The Last Christmas is one of those. Yes, this looks like that movie spoof “The Night the Reindeer Died" from Scrooged. And in a way…it sort of is.
Only with less Lee Majors.

Our first page looks like what one of those Rankin-Bass animated specials would come out if you put Ralph Bakshi in charge of the production, and I’m not saying this snowman looks a bit boozy…but, yeah, he does. 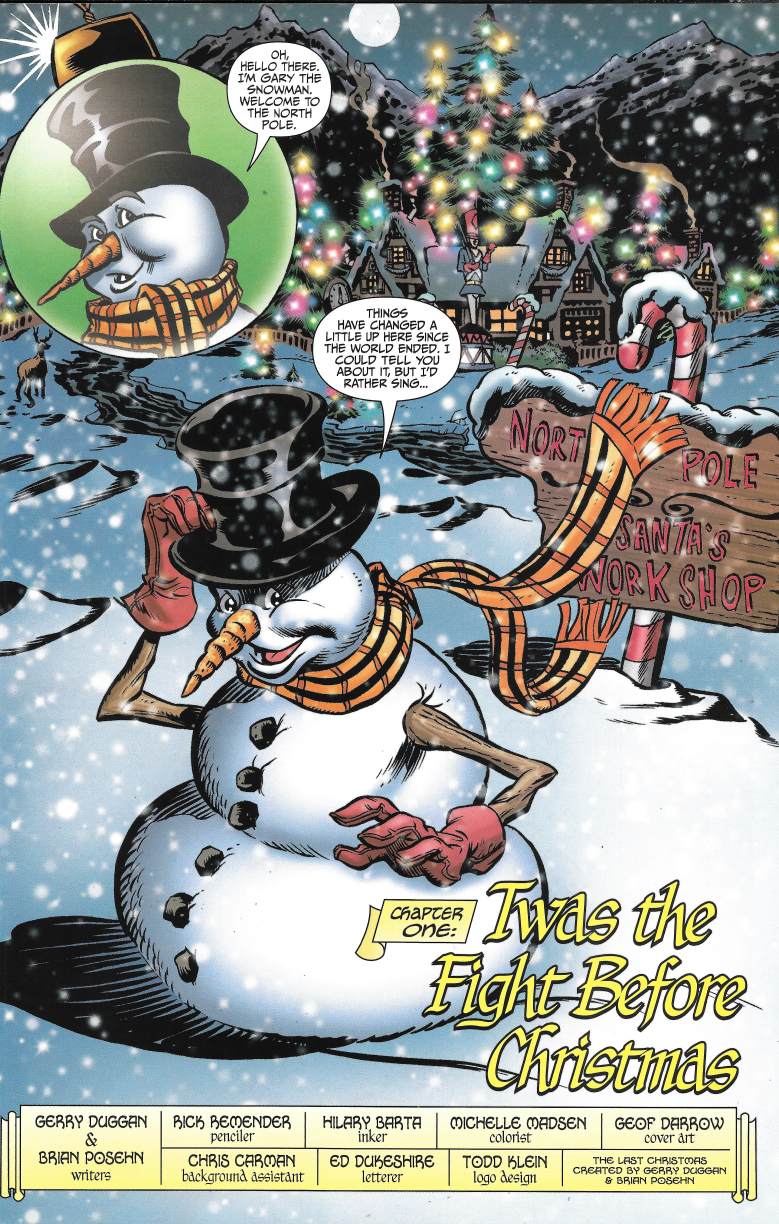 And when he breaks into song… 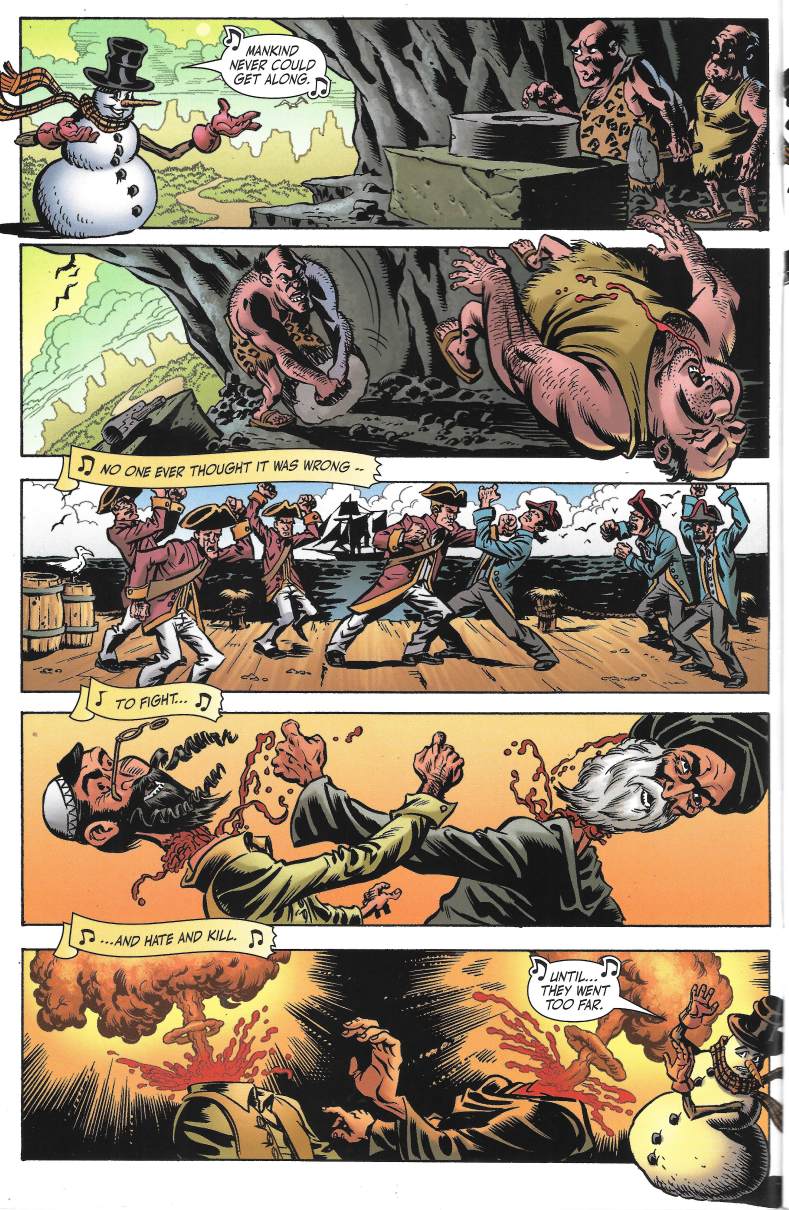 … we get the vibe I had hoped for the book. Something that said: take none of this stuff seriously, folks. It is going for over-the-top action parody in a good way. Or at least it starts out like that. Gary leads us through the utter destruction of civilization… 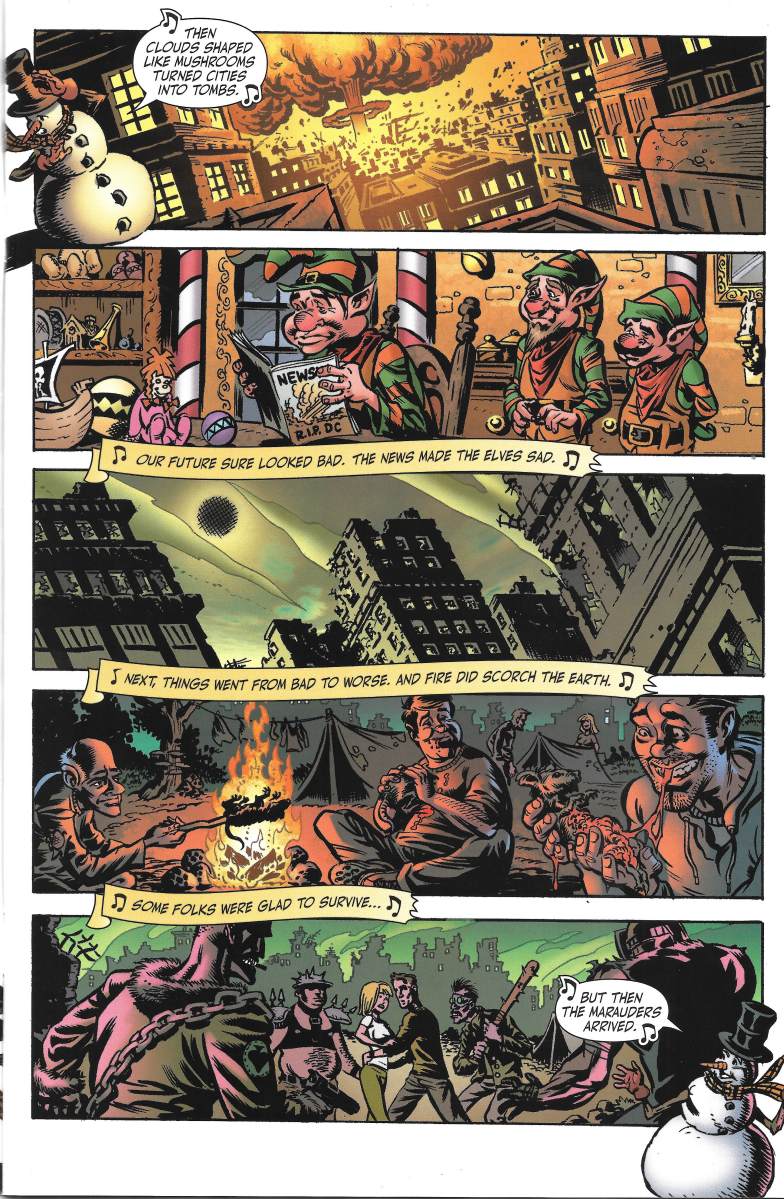 …and possibly humankind’s as well. Seems our nuclear strategy made us more than just prey for the more violent, criminal elements in society, but also created a race of mutant-zombie humans. 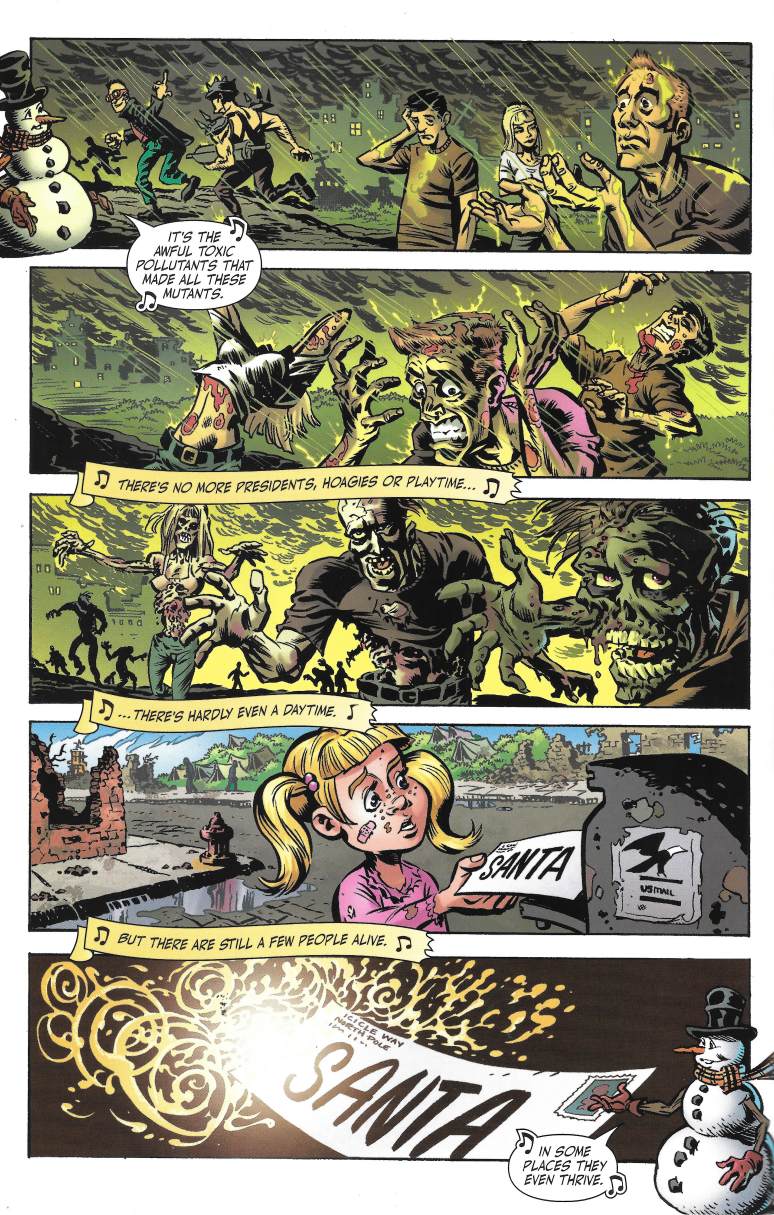 Of course, the story won’t have much point if there aren’t some survivors left somewhere… And apparently Saint Nick is still making toy runs to them. 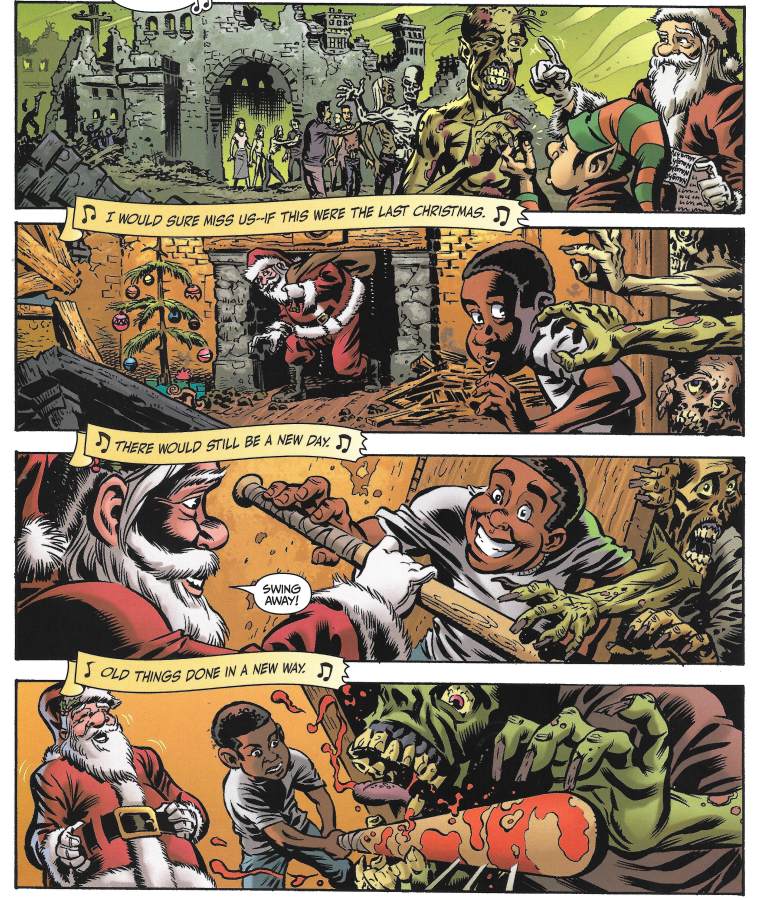 All this is just backdrop though, as Santa’s little jaunts aren’t our real story. Oh, no. The story takes a much darker turn. Gary turns back to Santa’s workshop only to receive some startling news. 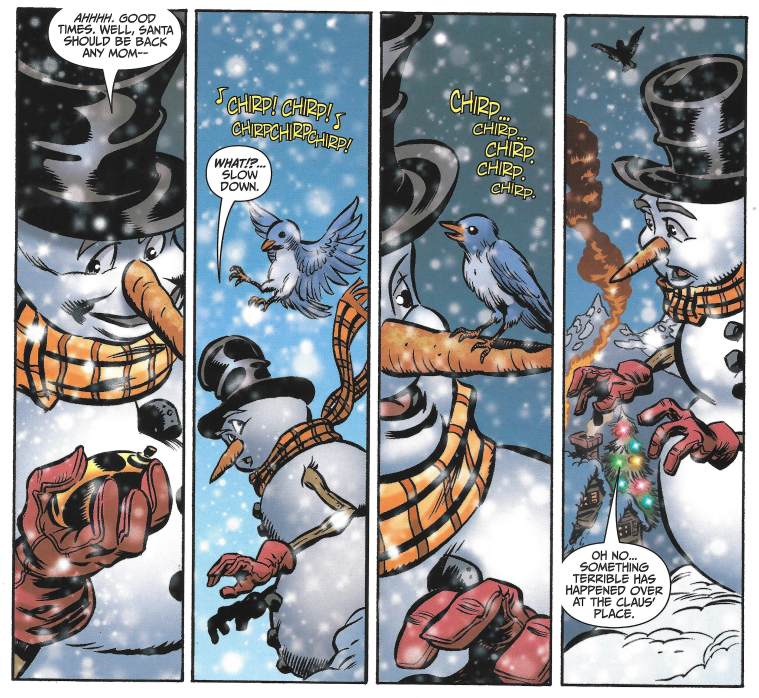 Terrible indeed! Appears the marauders have shown up to sack the place. Maybe make that past tense, as in they HAVE sacked the place. 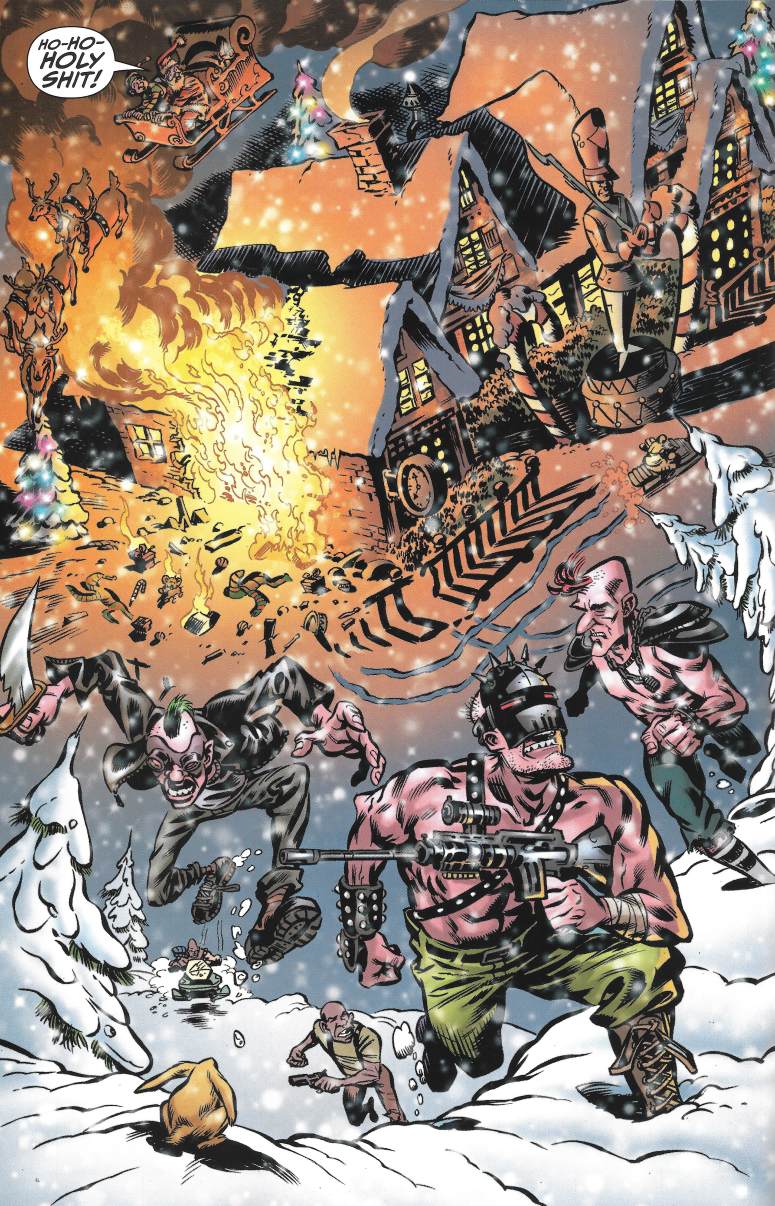 Some have even paid the ultimate price for protecting Santa’s workshop. (which, when you think about death vs being forced to make toys every day for the rest of eternity, may be a kind of blessing). 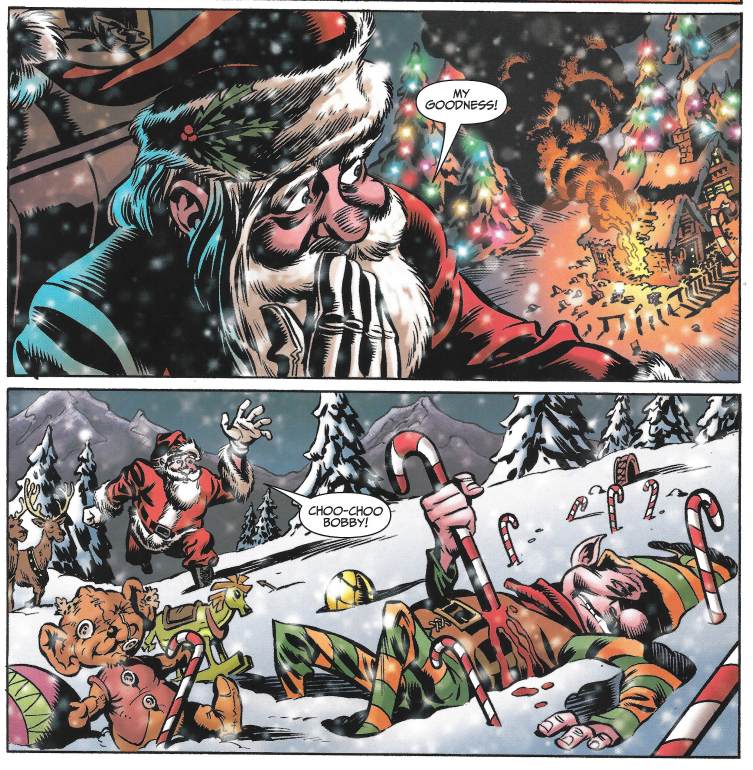 Everywhere Santa turns lay the injured and dying. This is all supposed to fill the audience with a need for revenge on Santa’s behalf, but to be honest, it doesn’t get me there. 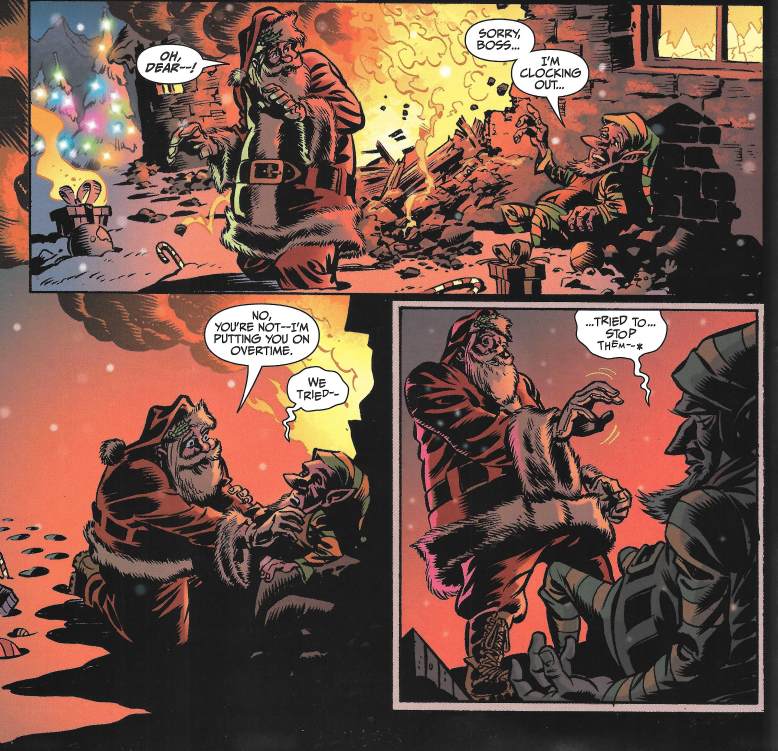 Not even this next bit. 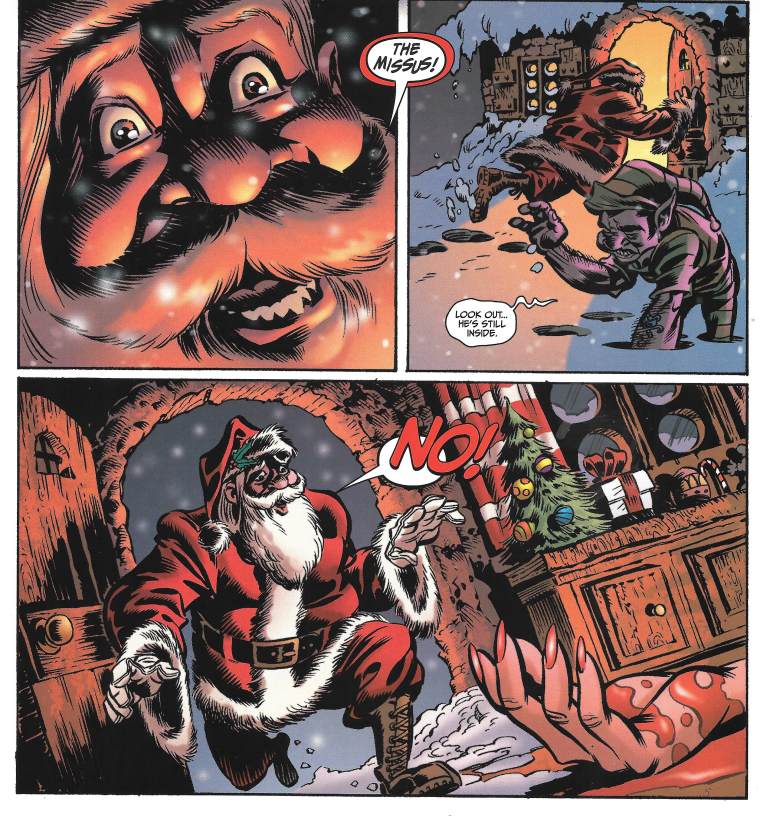 Where we find Mrs. Claus has been shot in the head. Just like Santa himself will be. 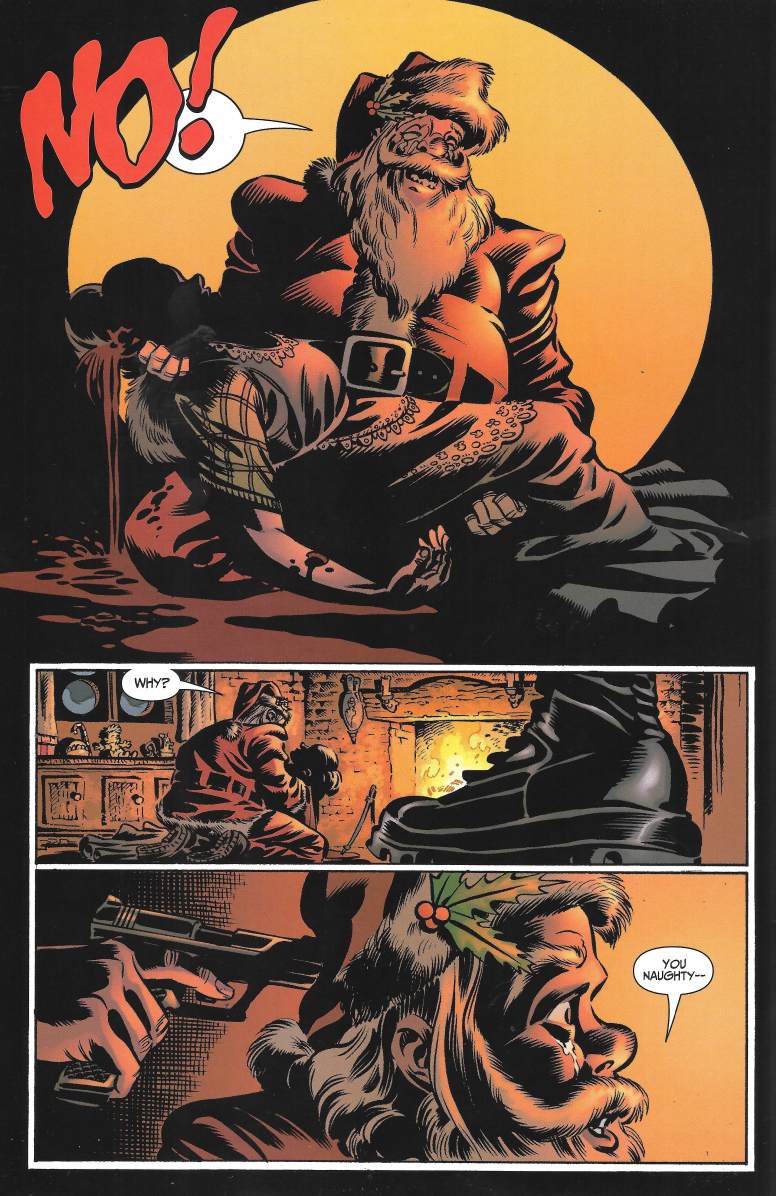 …in the next second. And we don’t get to see the perp’s face, which is either a reveal they are saving for a later issue or they are setting this up to be a faceless crime committed by an unkind world. I’m going with the latter as that allows the audience can feel any acts of violence Santa chooses to perform to avenge it will have complete and utter justification.

Speaking of acts of violence, it isn’t quite over just yet. On the way out, our square-jawed marauder decides to take out an elf. 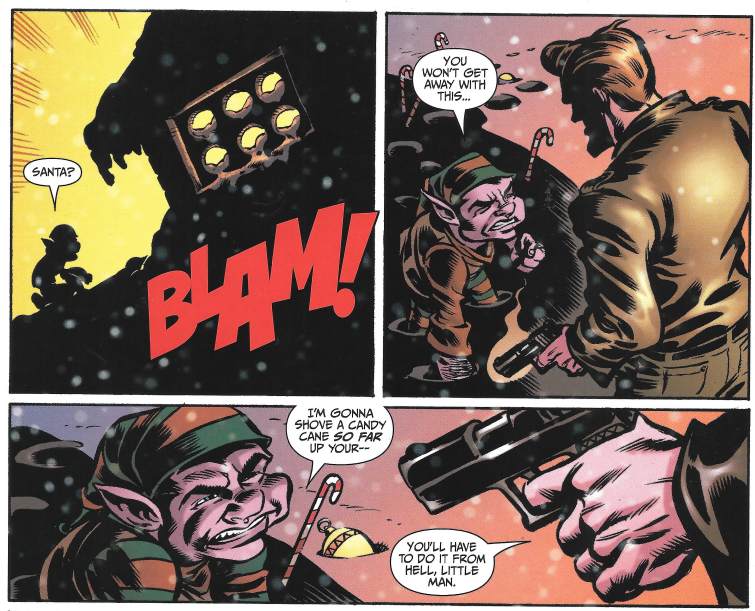 But he has to settle for doing in the top name in Santa’s reindeer order instead. 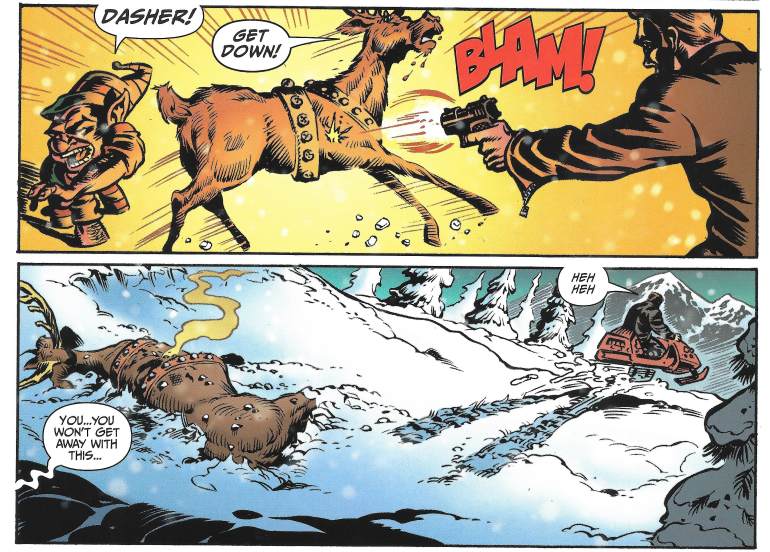 Okay, by this time I’ve had enough of this bleak part of the storyline. I need something funny or happy or angry. I need Santa to burst out of that cottage, alive and full of fire. Instead we get…more Debbie downer stuff. Santa awakes stuffed into Dasher’s carcass for…what reason again? Oh, yeah – the lame joke that one of the elves saw it in a movie once. I think that is some kind of slight on Empire Strikes Back. 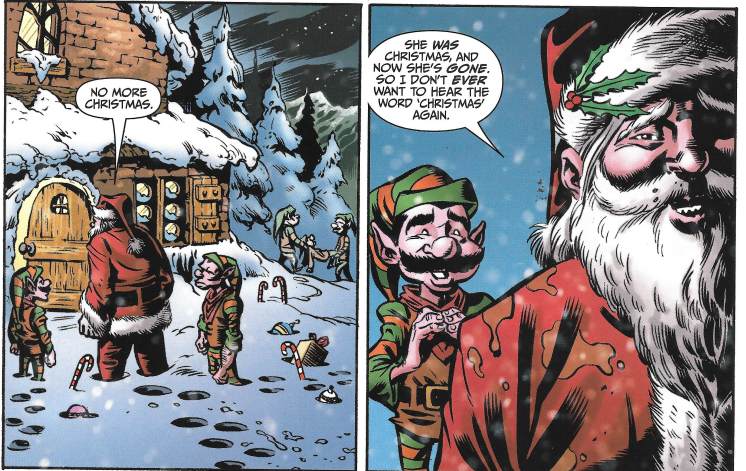 The worst part of all of this is that Santa has just given up. The destruction of humanity and now the loss of friends and his spouse have broken his will to live. See how this isn’t where you want this book to go?

Santa then proclaims this was THE LAST CHRISTMAS! (emphasis is the book’s) and then goes back into his cottage. And he hides out there for months to come naked, drinking rum, and eating the pancakes the elves bring him. While bathing in the maple syrup, apparently. 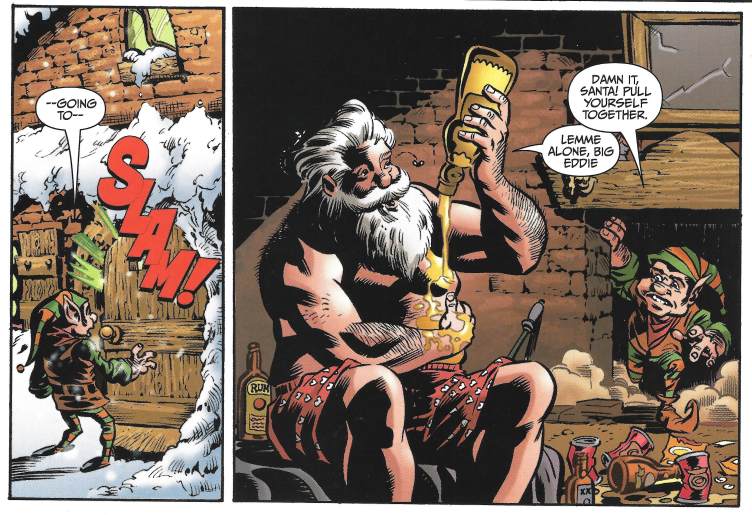 Not sure what is making me root for a crazy and sticky hobo at this point, but the elves at least have the right idea of where the story needs to head… 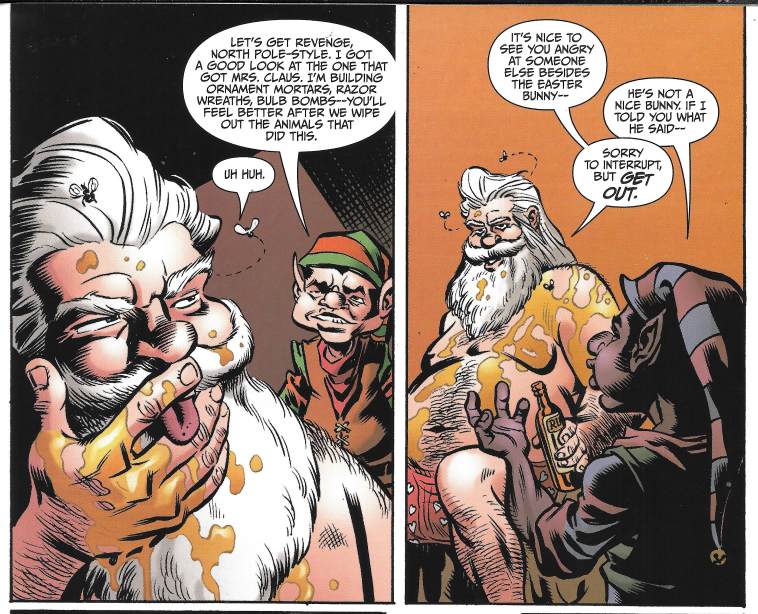 …but instead, Santa decides to give up completely. And if you thought that’s what he had done already… 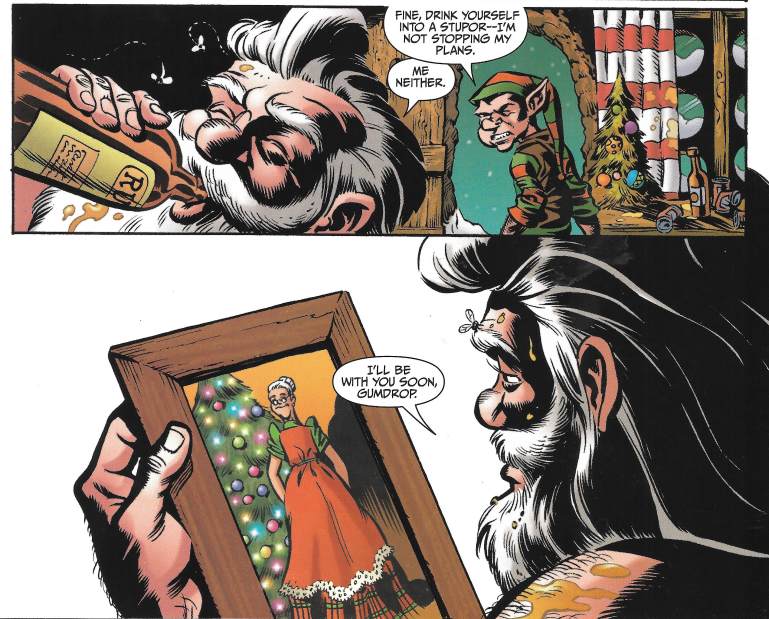 … it will only take a brief sleigh-ride … 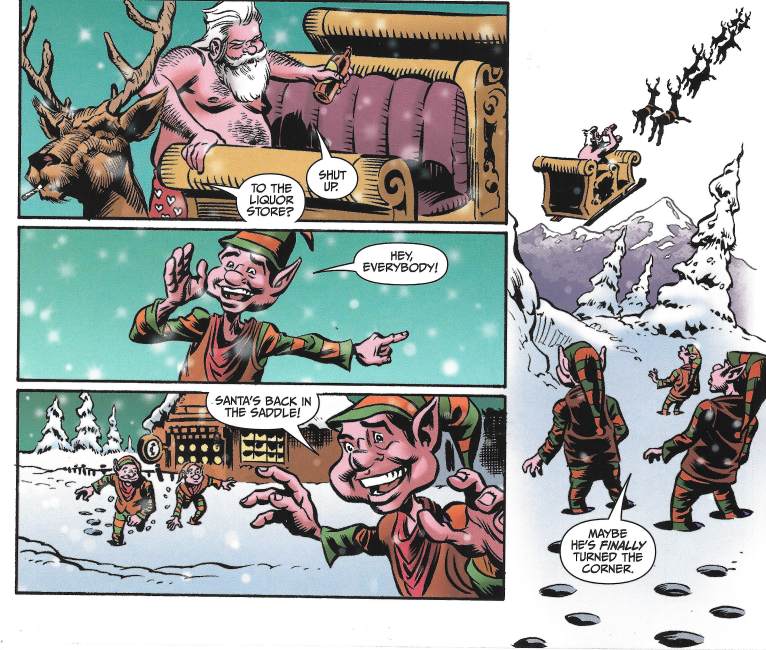 …to show that a suicidal Santa really is the basement you didn’t think was there. 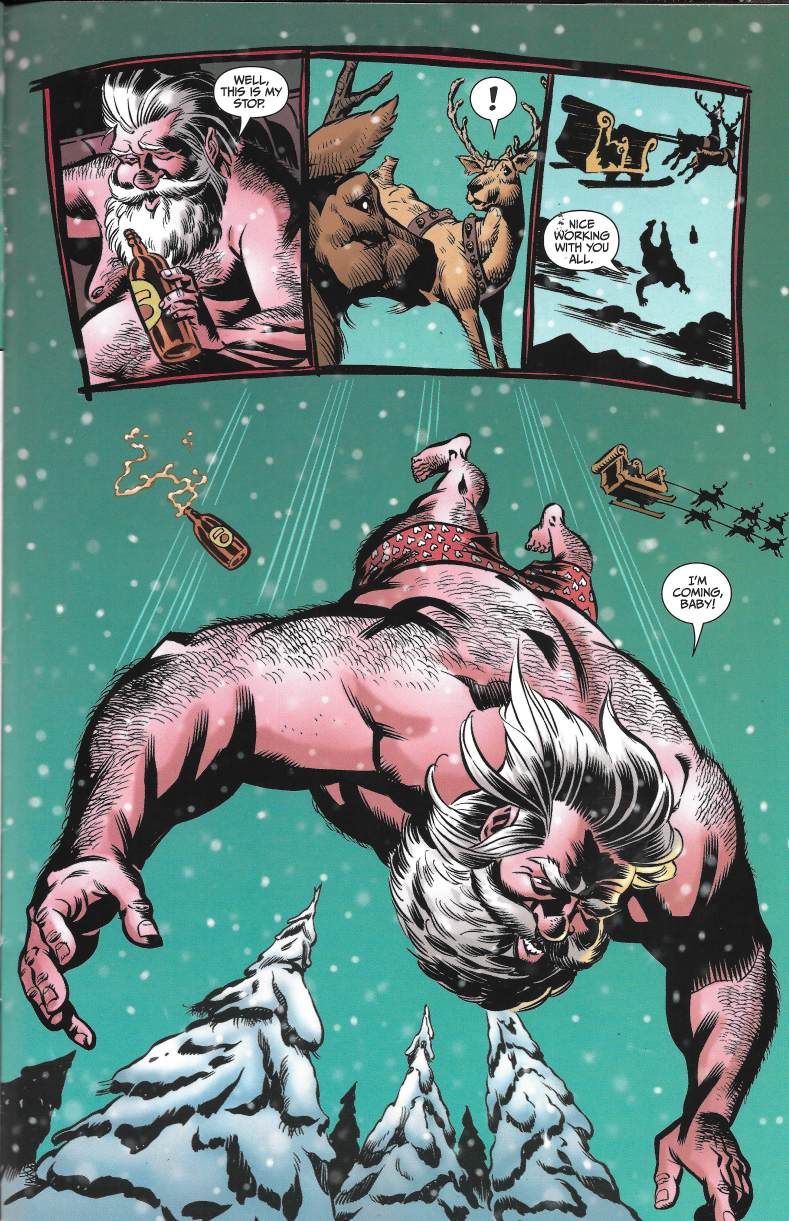 I have to agree with the elf here. But try as he might, what Santa soon discovers is that no amount of killing himself will actually cause his death. 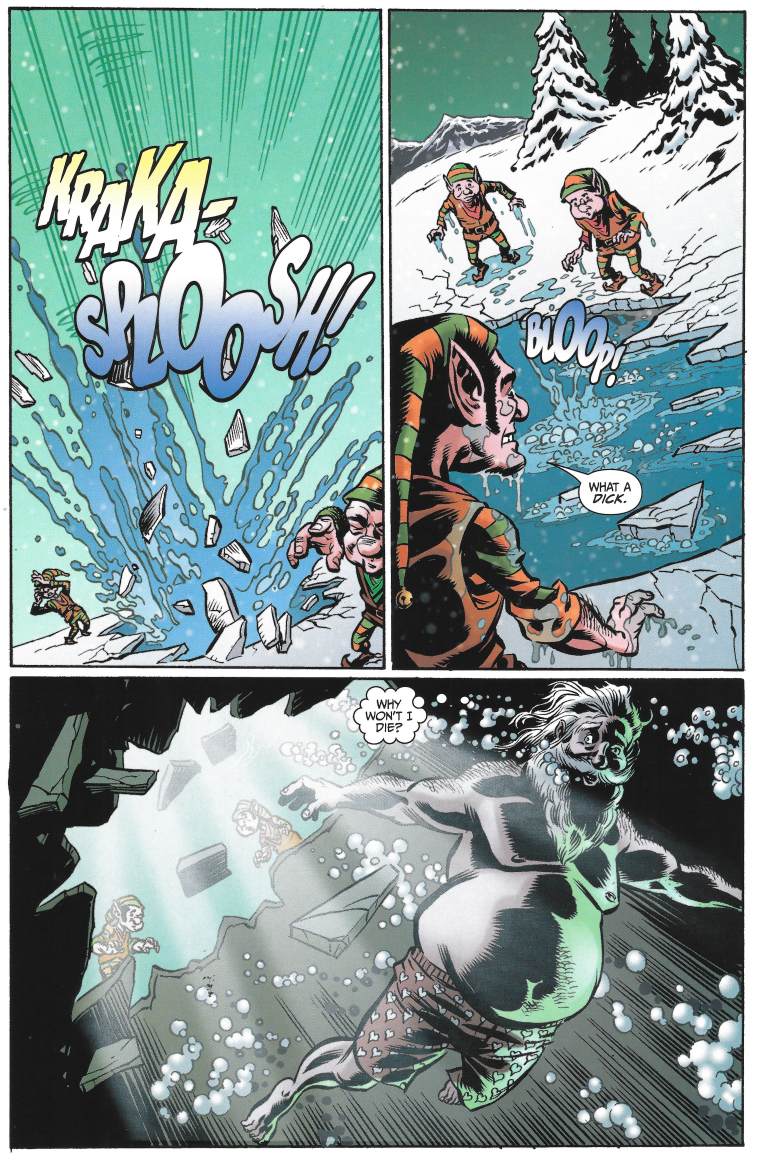 After going this far along, it appears this bit of the story is on its last foot of rope. 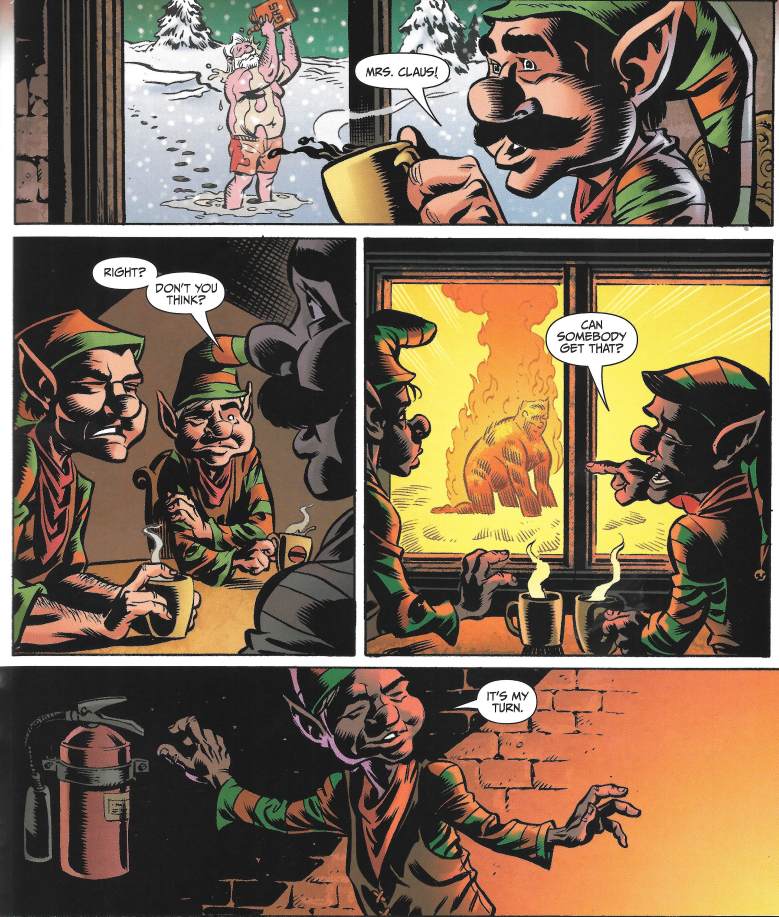 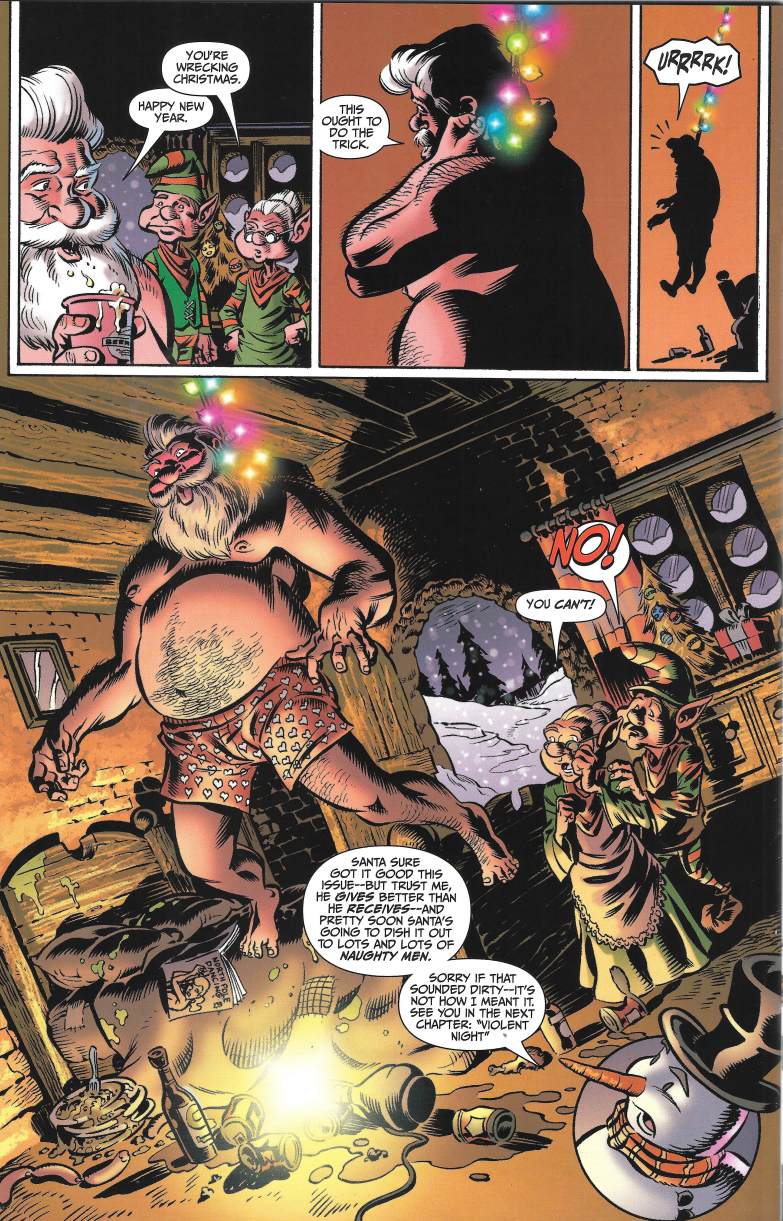 I admit to having high hopes for this one. One way or the other, I looked to be entertained. I could have taken Santa Claus vs the Martians inept goofiness. I would have rejoiced at Die Hard-levels of Christmas vengeance.

But depressing and unfunny just don’t cut it, in my book. Sadly this high concept of Santa-Terminator verses a world of Mad Max, punk rock mutant zombies while saving the last vestiges of human society looks like the single present under the tree you can’t wait to open, only to find it is nothing but ugly holiday socks two sizes too small.

Better luck next year.
Posted by SonOfCthulhu at 11:19 AM