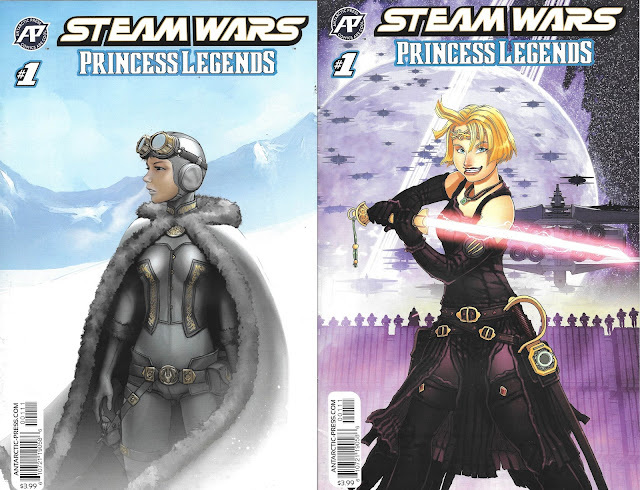 Okay, I don’t know what to make of Steam Wars.

The original was perhaps a clever almost parody of Star Wars, taking the same character architypes and twisting the science fiction-fantasy genre in a slightly different way. Created by Fred Perry, the guy behind all those Gold Digger comics, the story came off like a sweded version of Star Wars.

You had an evil empire called the Hegemonic Crux led by a guy named Lord Baron who wore a face mask. He’s got some dreadnought things that the "Princessy" Duchess Imoen steals the formula for running. She stumbles across Bo, a swordsman who happens to be Lord Baron’s son, bounty hunter Hansel Lowe, and Hansel's companion Smokey, a large brown bear. TV Tropes calls these “Expy” or “exported characters,” someone unambiguously and deliberately based on a character from an older, more well-known series. The run of Steam Wars wasn’t quite parody or satire, but it certainly hew to the story and character models of Star Wars too closely to be its own thing.

Around here we really try not to pay attention to most of that and just concentrate on “is it any good?” or “did you like the story?”. I’m simple that way.

Steam Wars: Princess Legends came out two years after the first series wrapped up and it feels like it is aping the retitled Expanded Universe comics from Marvel and Dark Horse along with some bits of Force Awakens toys and Phantom Menace setpieces. The story in this first issue is so slight that it is hard to believe it clocks in at 17 pages. It is the same experience you would get pulling in to The Phantom Menace and only seeing the final Darth Maul fight, with everything else edited out.

The book feels like a total and complete cash grab. The Asylum*-like title in faux Star Wars font on the front cover (and back, so if you aren't careful you might end up buying the issue twice) and graphics that evoke the actual Star Wars characters, settings, and weapons all look to be designed so that it gets accidentally dropped into your pull box or picked up while rushing through the comic book store. I get the “joke” in making this a story “like” Star Wars, but the moment they start aping the look of the actual books this closely (and doing that swiveled second cover thing) is the moment it feels like they don’t care if you bought it intentionally or mistakenly (or twice!).

Let’s dive in anyway, because the Last Jedi is calling me and I want to get this out of my system first.

So, I complained about page count above and how is this for an opening: 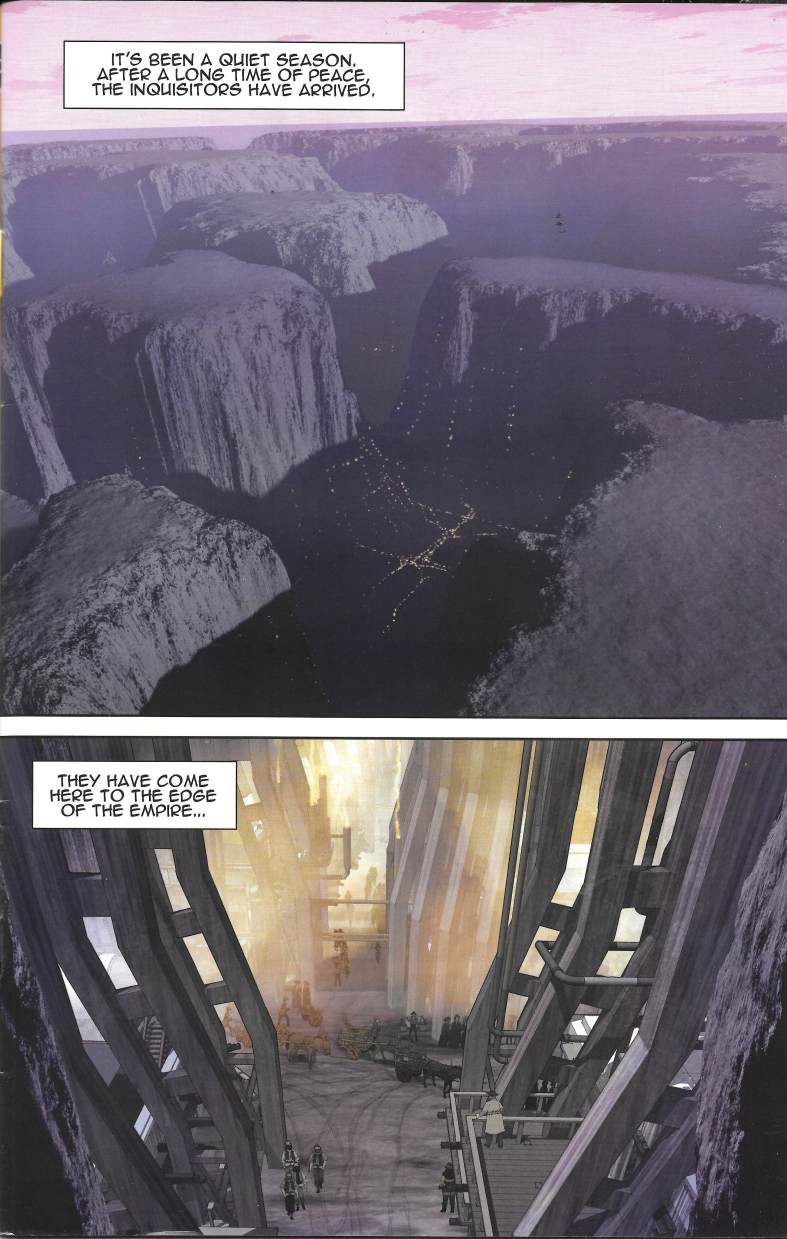 Cold, sterile establishing shots with brief narration. Well, that wouldn’t be the way I’d go if I wanted to tell a story in an abbreviated format, but you do your thing, writer/artist Rod Espinosa. We are on a quiet, out of the way planet and the Inquisitors are here. I’m just going to assume that no one expects them.

Well, I guess no one except this woman.

This dark figure cloaked in a …uh, cloak? …comes wandering down the darkened streets. 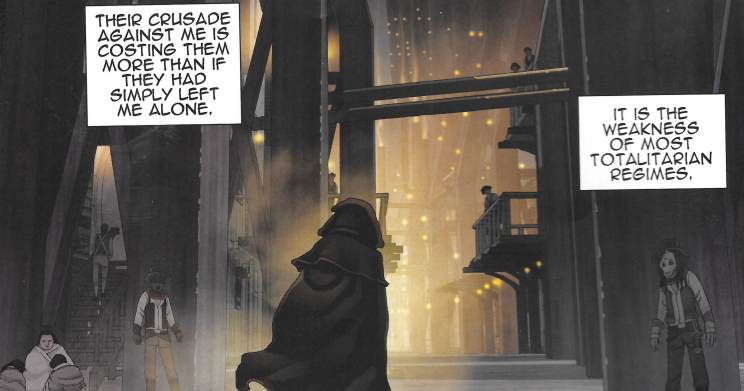 Meanwhile, a green glowing marble, like a tiny Loc-Nar, floats into the woman’s hand. 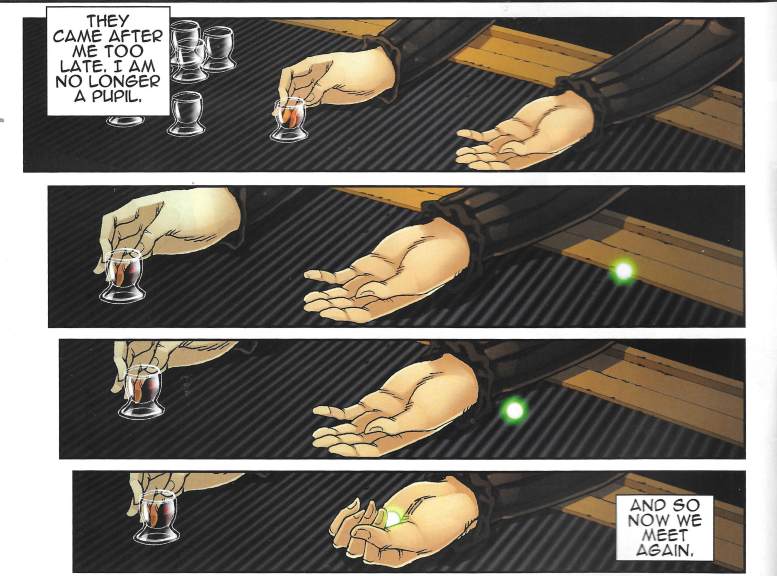 Just then, the hooded figure walks into the bar stating the “last of the light warriors are within our grasp.” And Oh dear god! Jar-Jar’s Rastafarian, Bob Marley-loving cousin has been serving her drinks… 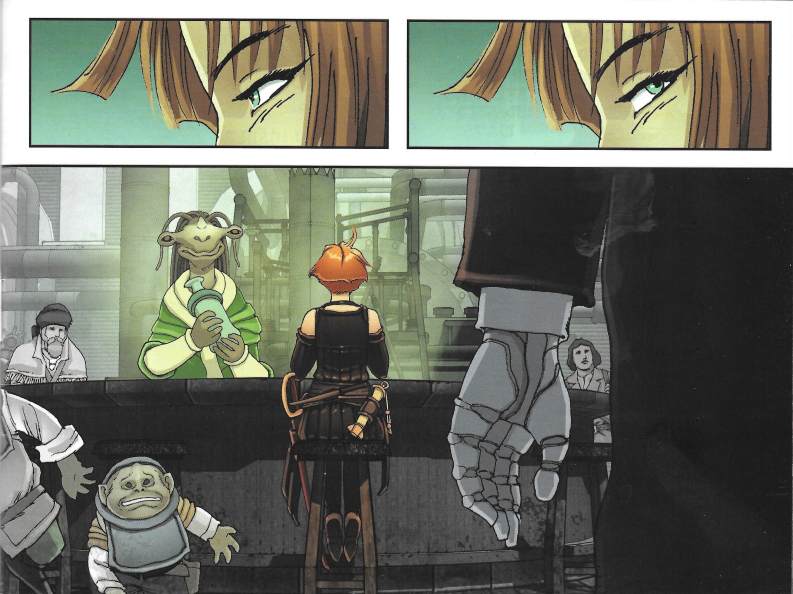 Turn page: The Rey…er, ray of sunshine at the bar meets the very “Kylo Ren”-like Lord Kyder. Kyder identifies her as the Last Warrior of Light. She calls him Last Knight of Shadow. Art has taken a downturn in quality. They trade barbs and then “You know what must happen now.” gets thrown in and I feel there will be a duel of some sort. 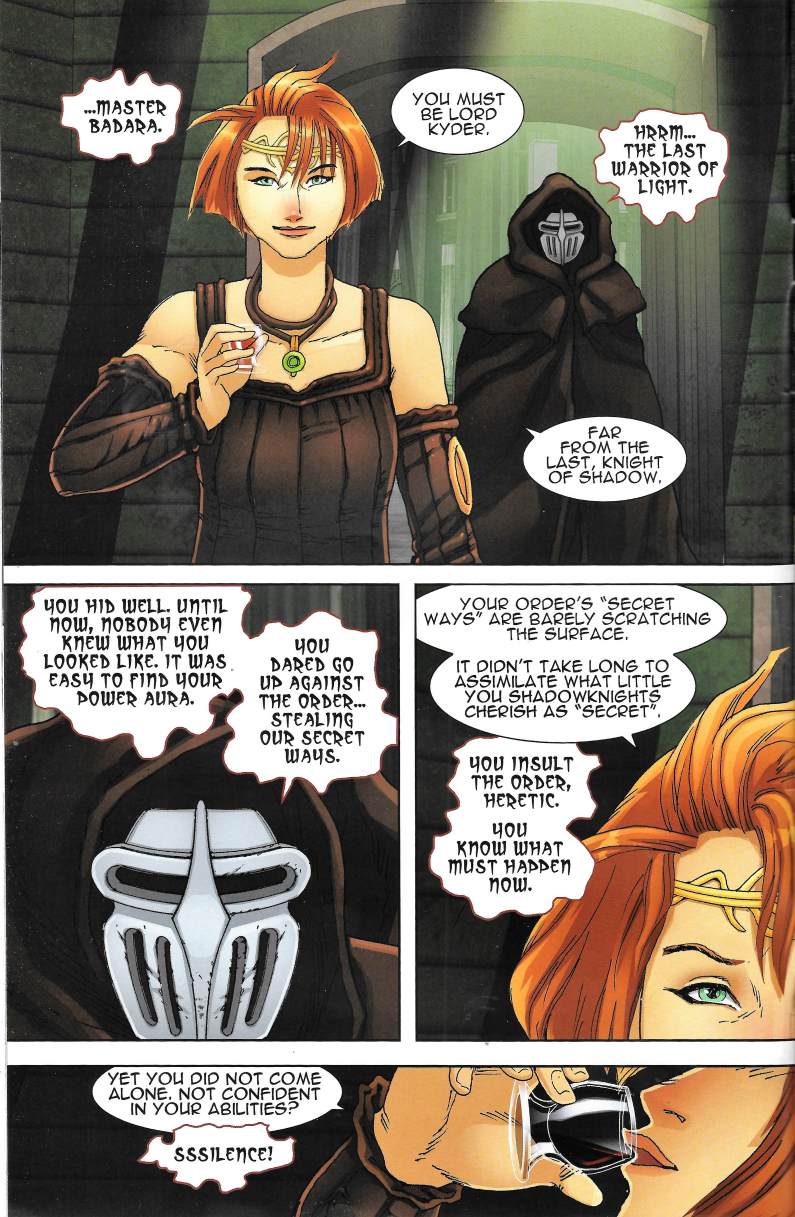 Bar-girl has a shit-eating-grin as Lord Kyder tries to turn on his...very hashpipe like lightsaber only to find it won’t light up because bar-girl stole his magic marble. 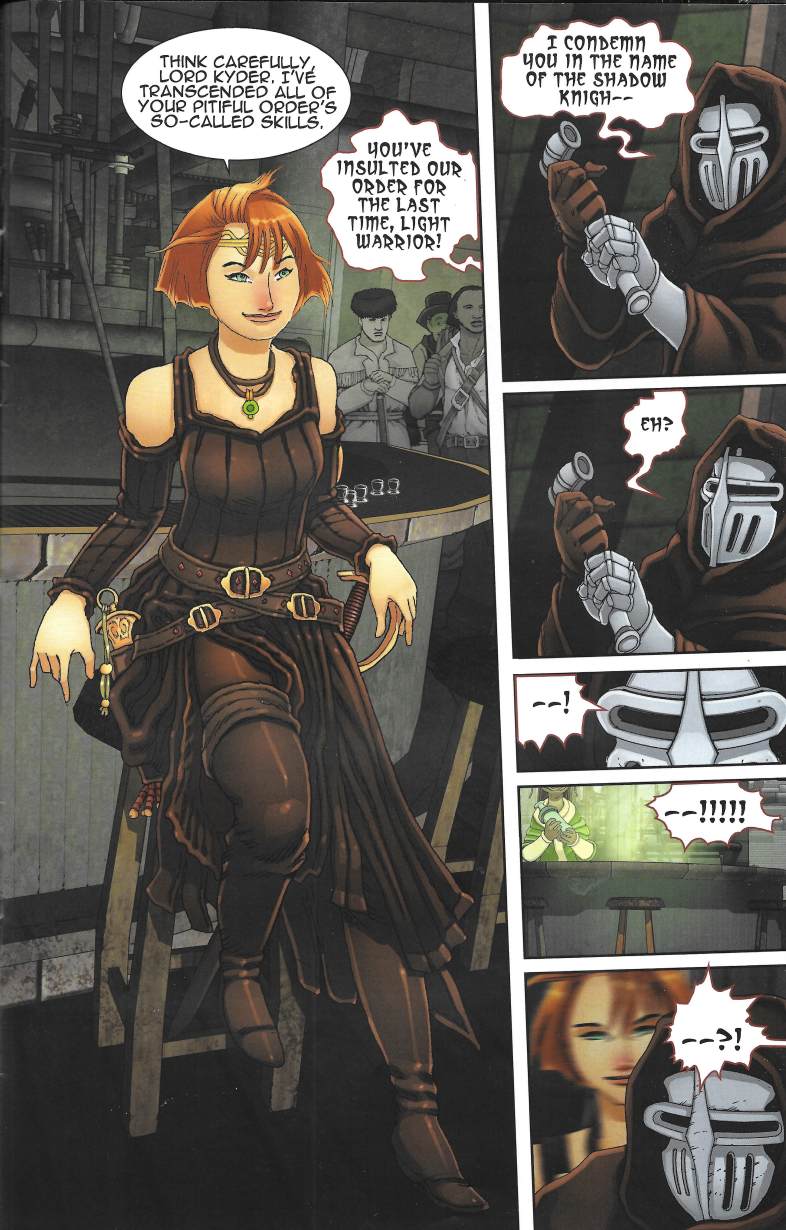 She then breaks several of his bones and gouges out his eye. Which is all very Star Wars like. Or not. One of those things. 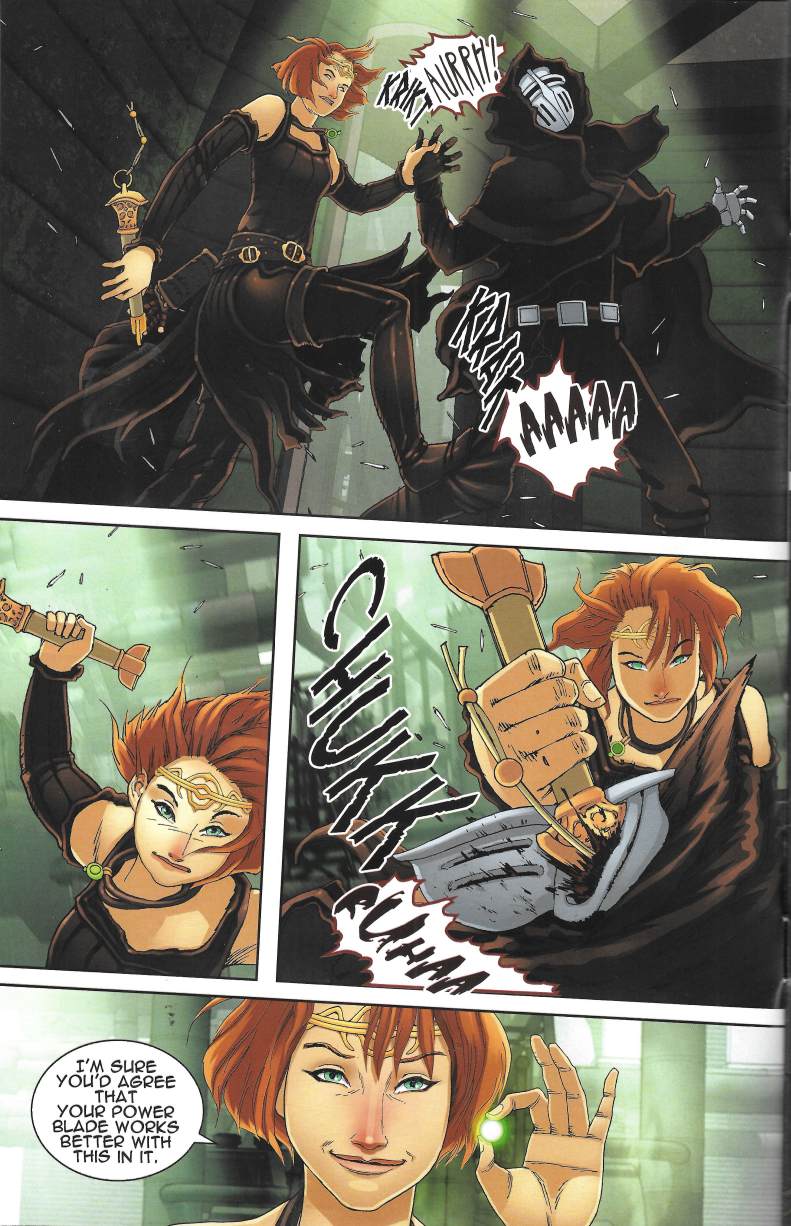 What follows is all mindless action setpieces where we hope we have read the subtext of the two sides in this conflict correctly because otherwise we are rooting for some random girl to murder and maim several government officials trying to apprehend her justifiably. 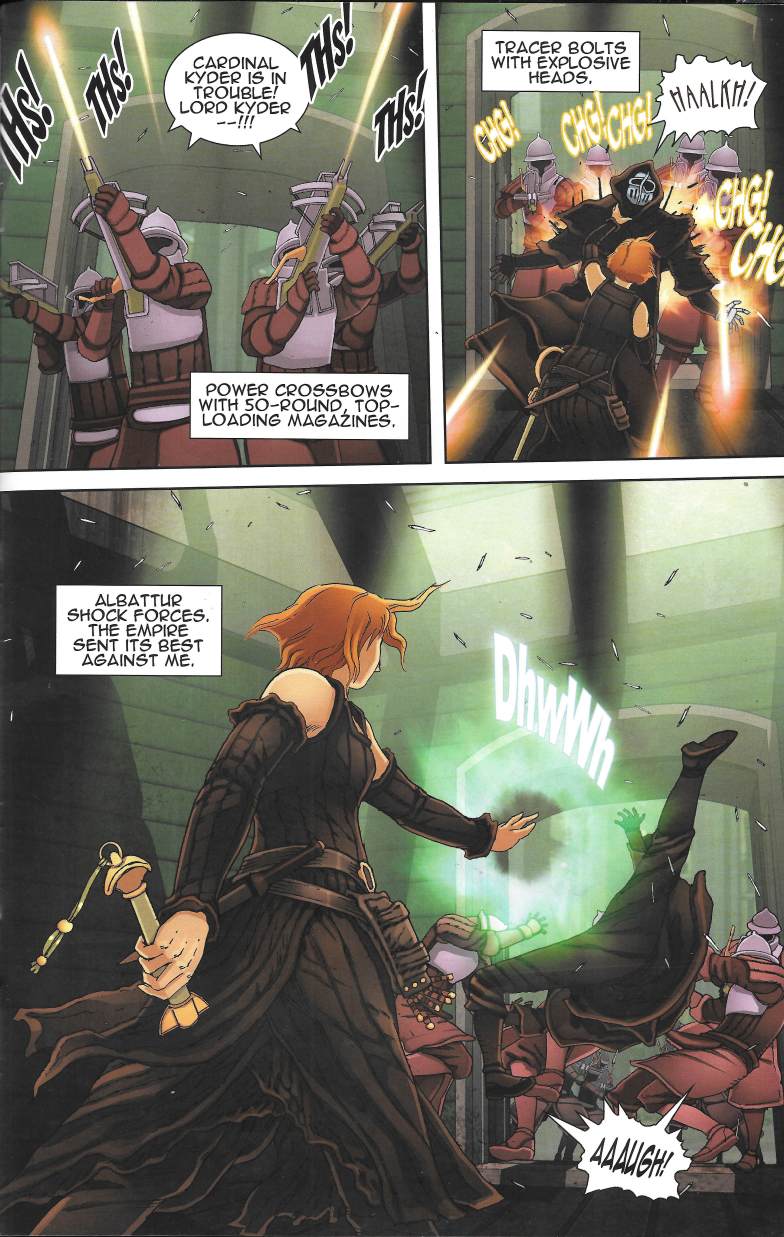 Like these Albattur Shock Forces, who don’t seem to be able to hit anything they aim for… 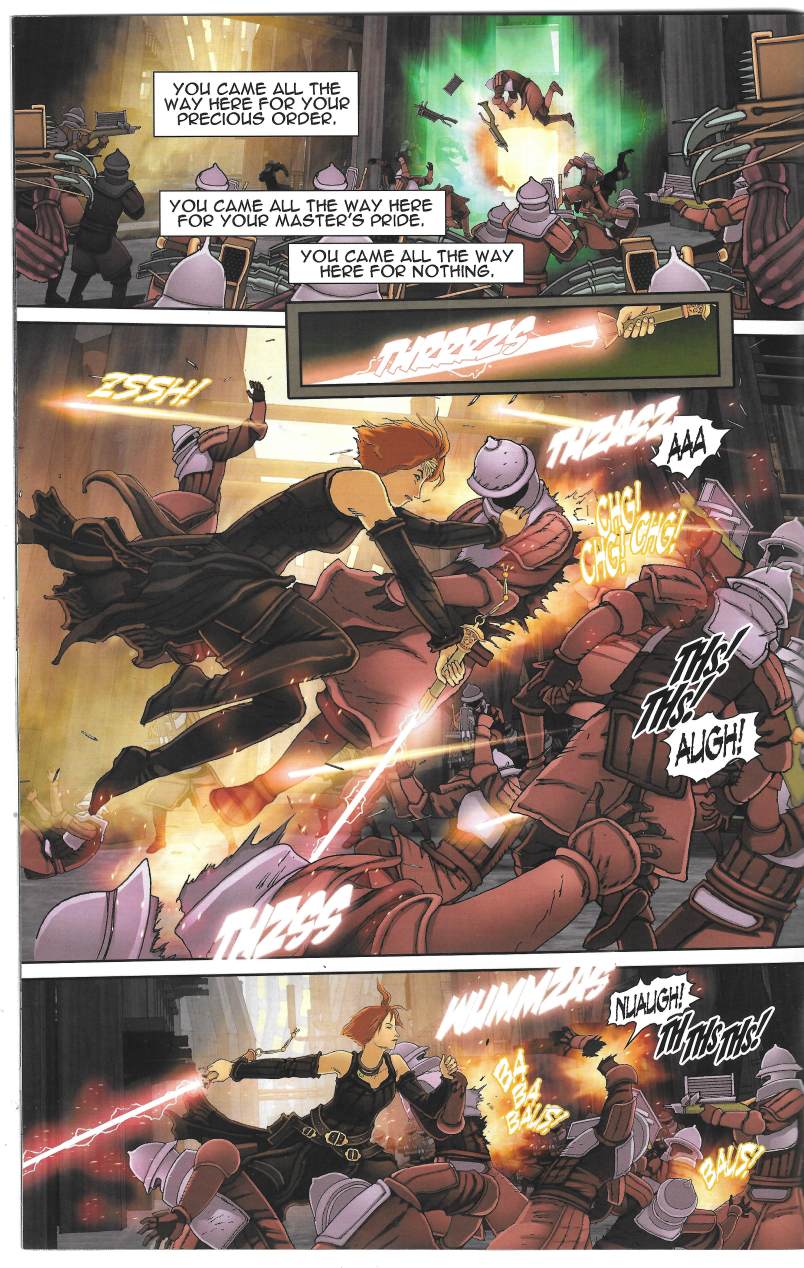 …but, like good cannon fodder, die in droves. Whether from being run through by Princess “didn’t catch your first name’s” glow sword… 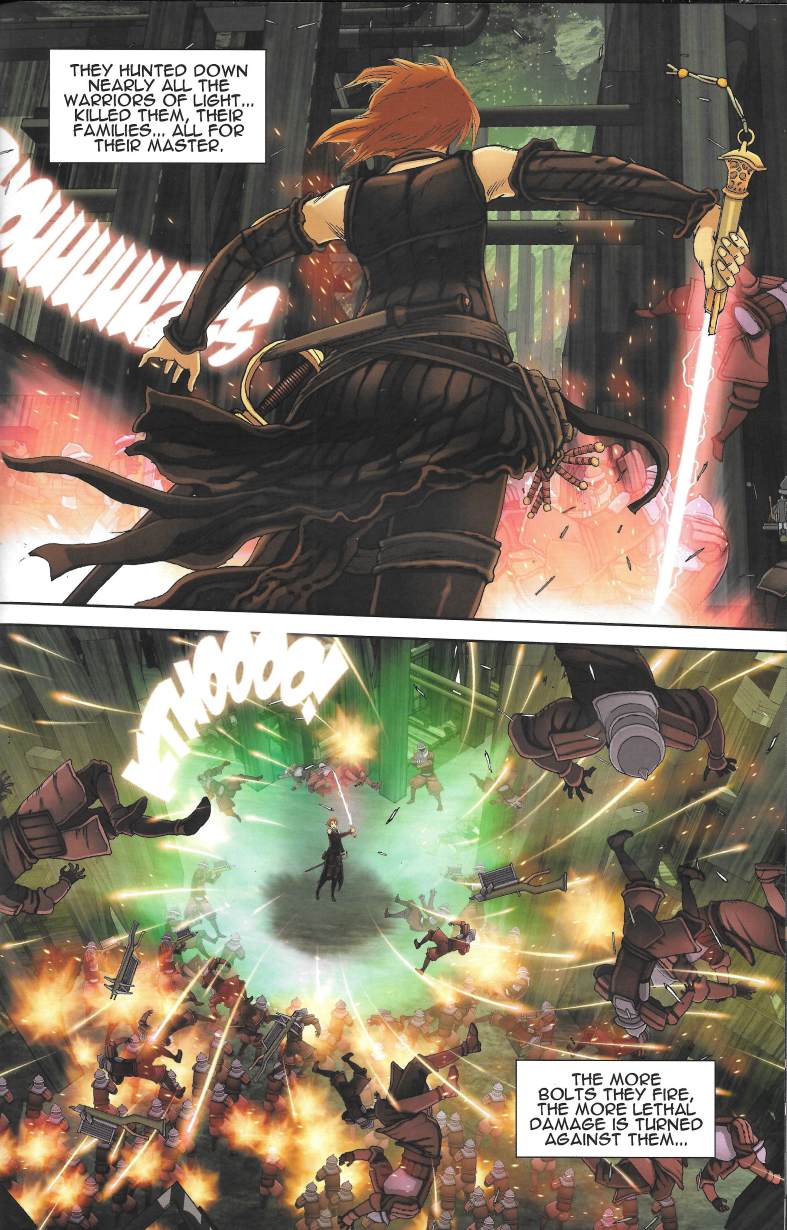 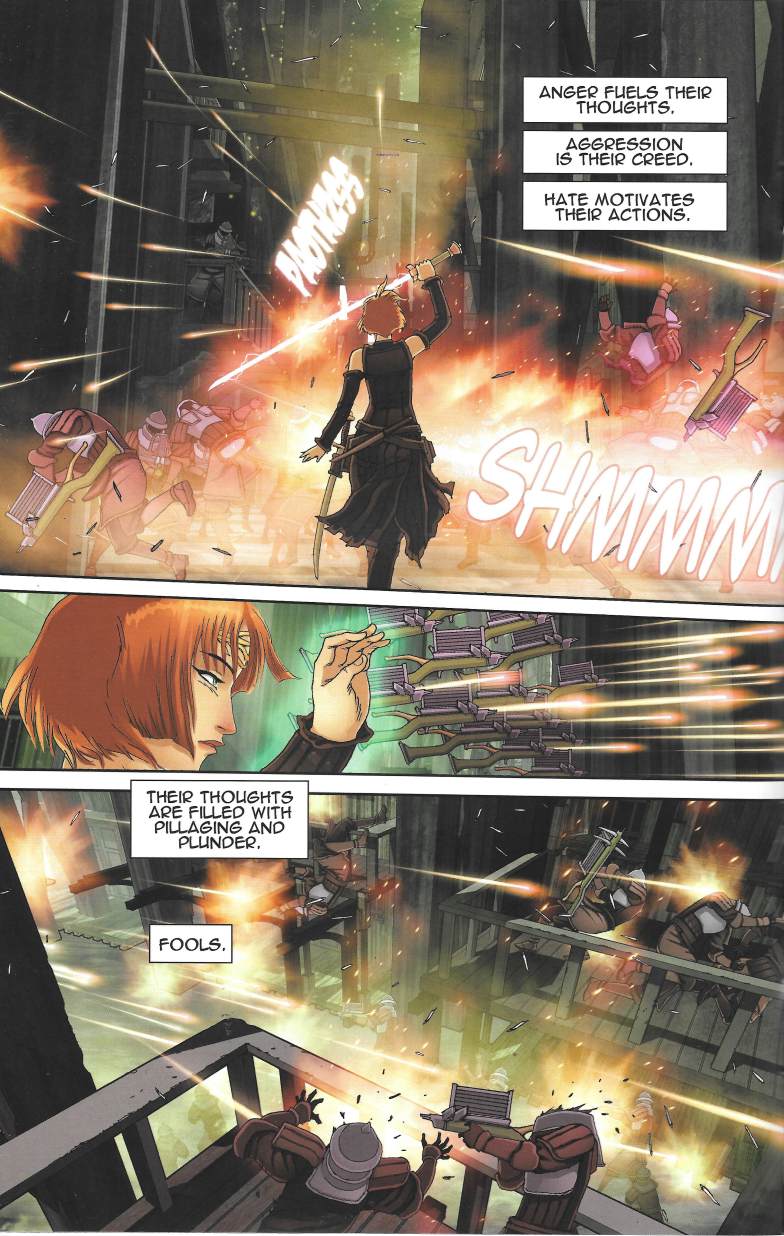 But it’s all good because they are just full of anger. Think of this like a Dr. Phil episode where instead of getting the people to talk out their issues, he calls them fools and kills them instead. Take that, anger.

All this leads to Princess warrior of light being the last one standing...or so it looks appears... 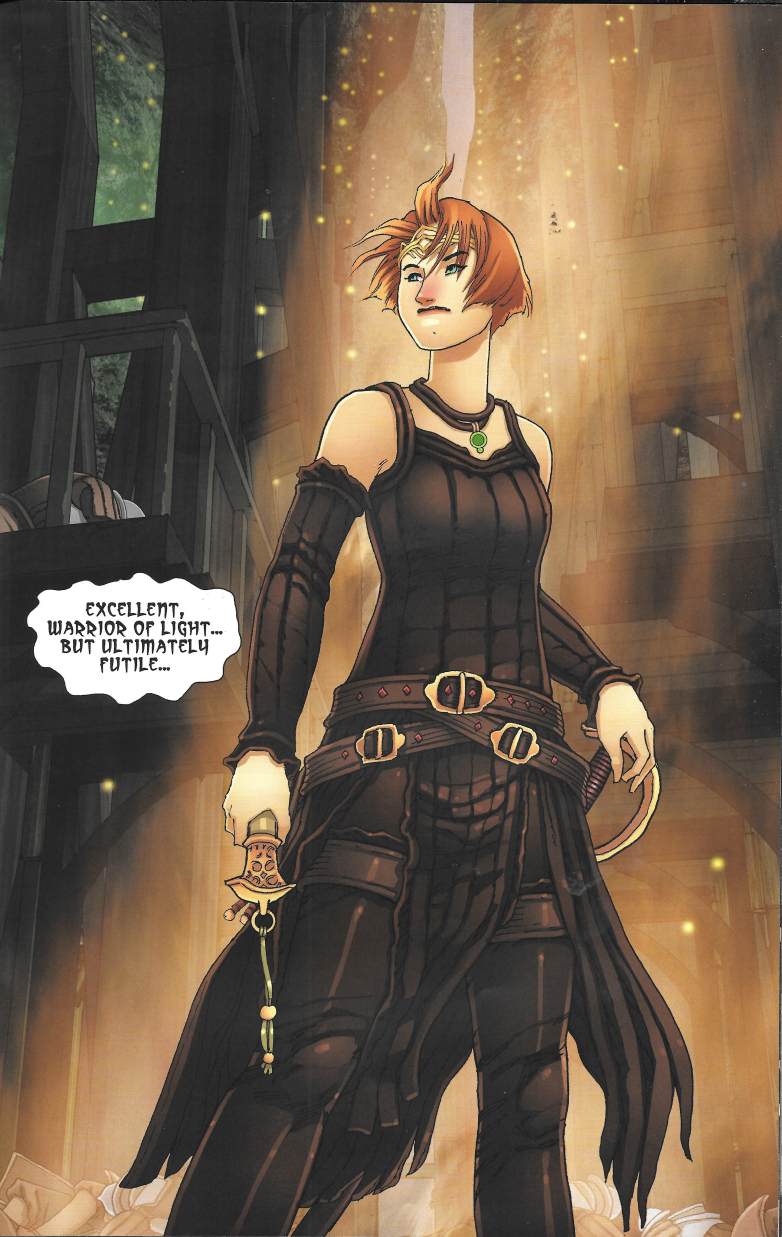 …until more Darth Maul-lites step out of the glowing green fart-fog talking trash. 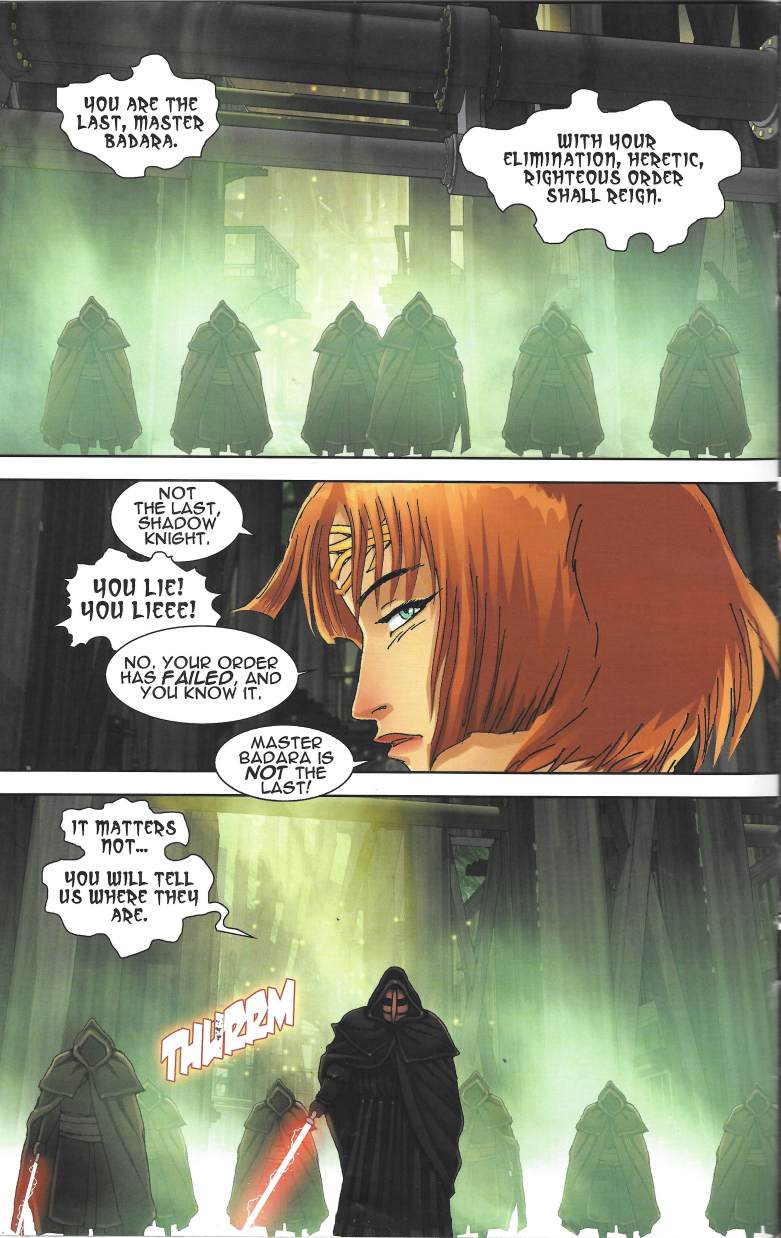 We know where this is going, too. Everyone has a lightsaber. 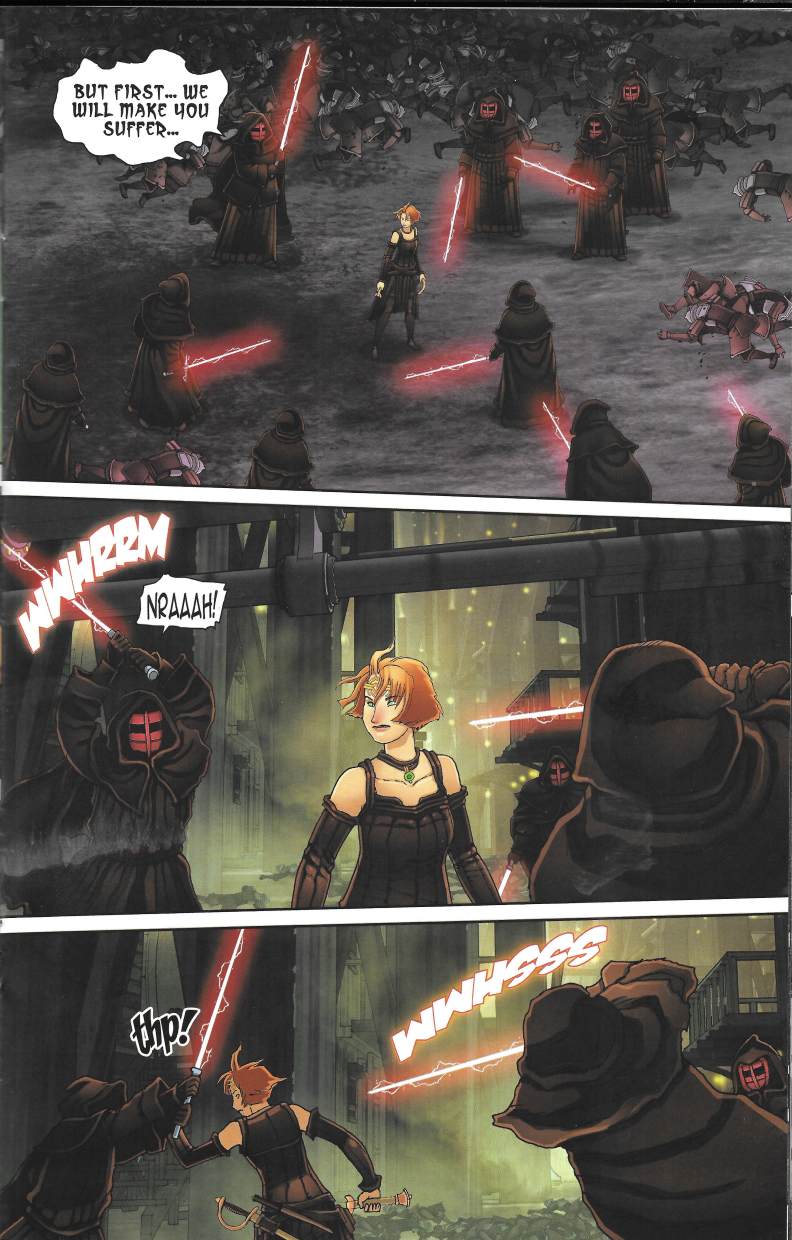 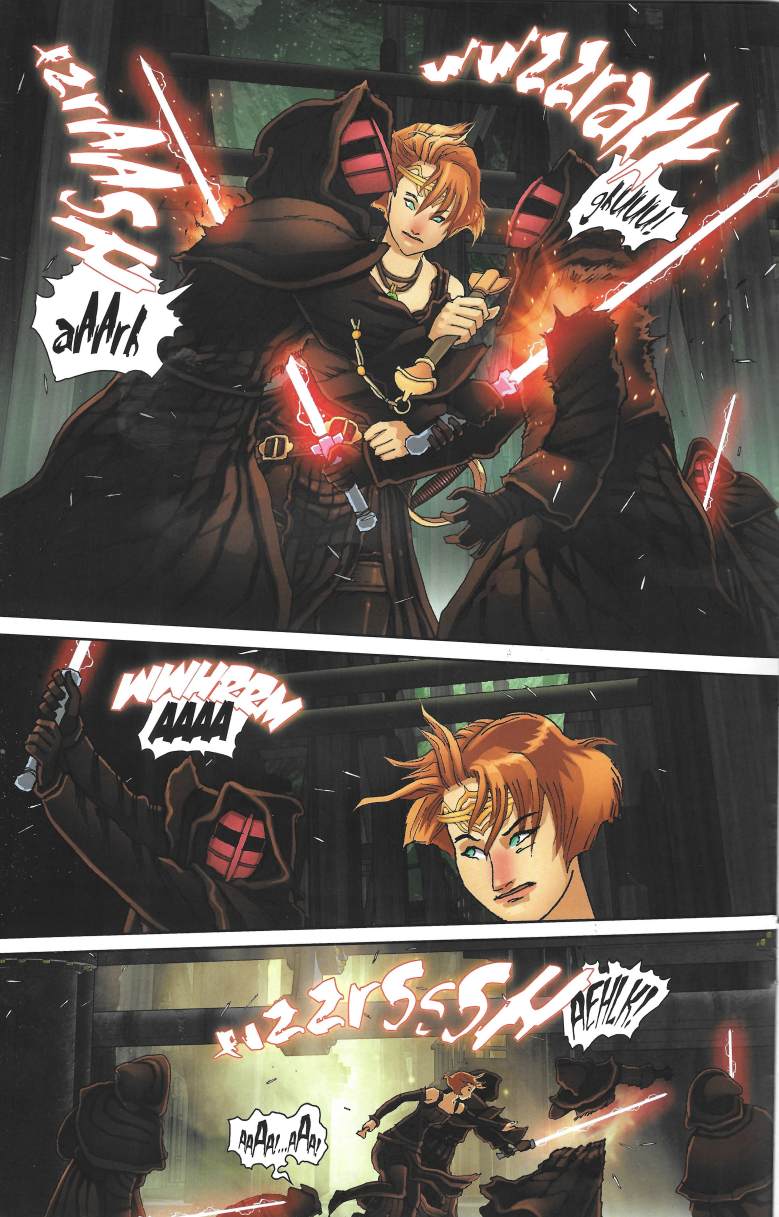 And all of them get brutally maimed (nice dig on Kylo’s cross guard being made of the same thing as his blade, I’ll give them that.) 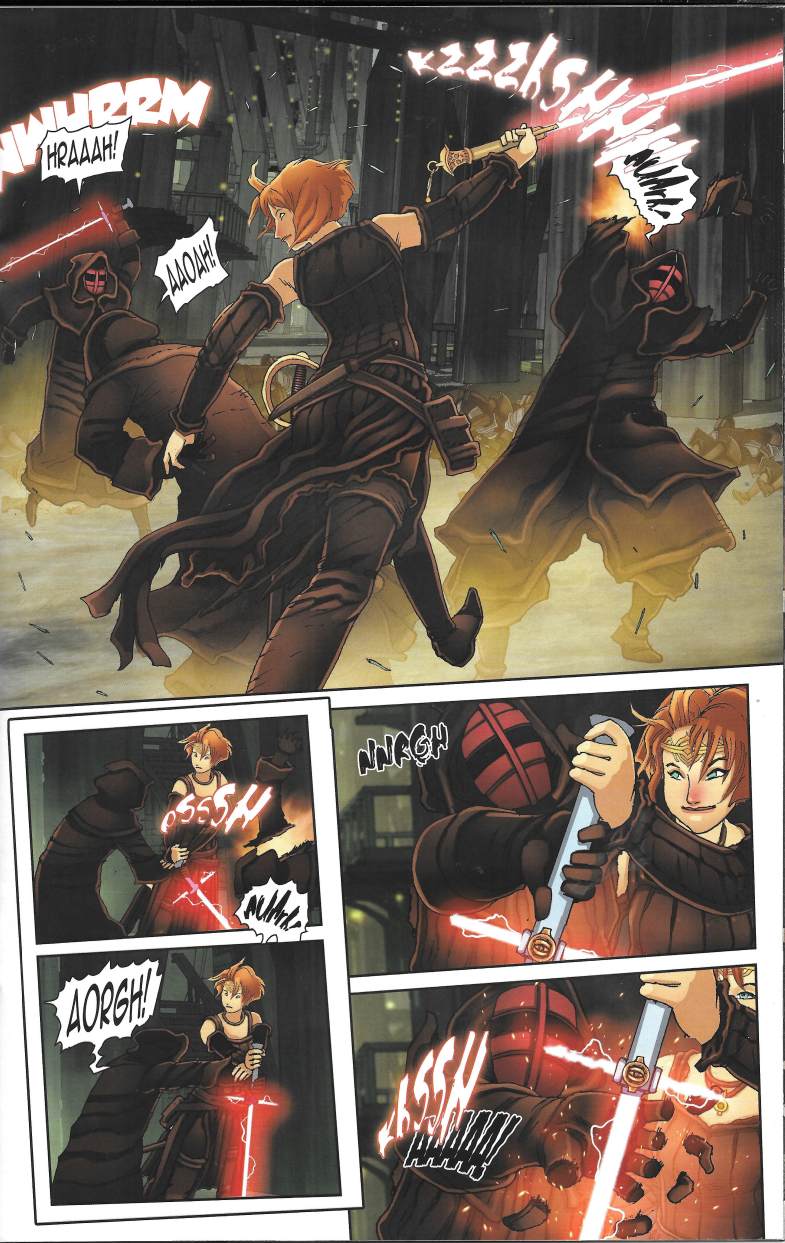 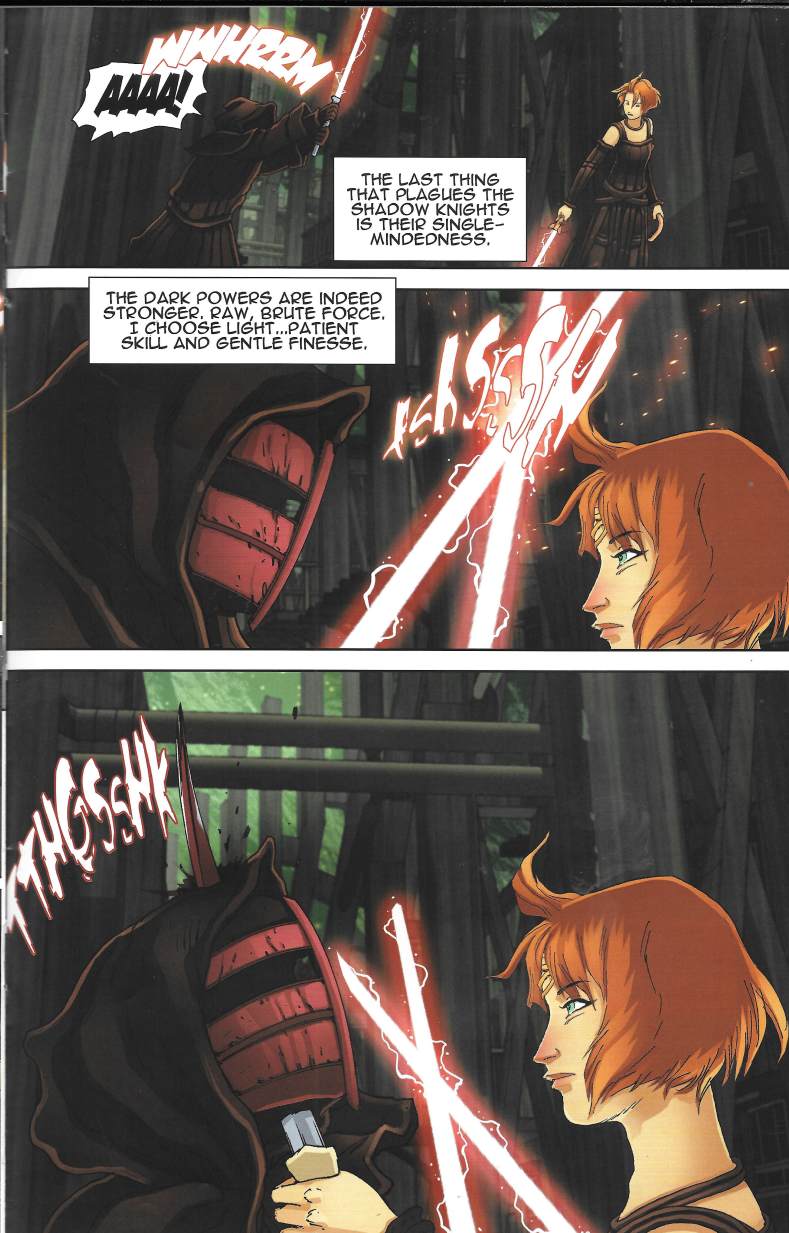 Wow, that’s…just completely bloodthirsty. And we end back at the bar to learn that Jamaican Jar-Jar is Master Badara and her name is Matzarehannia. So the book is one long extended fight scene with stakes we don’t know about until the end and with more dead bodies than the entire book has word balloons. 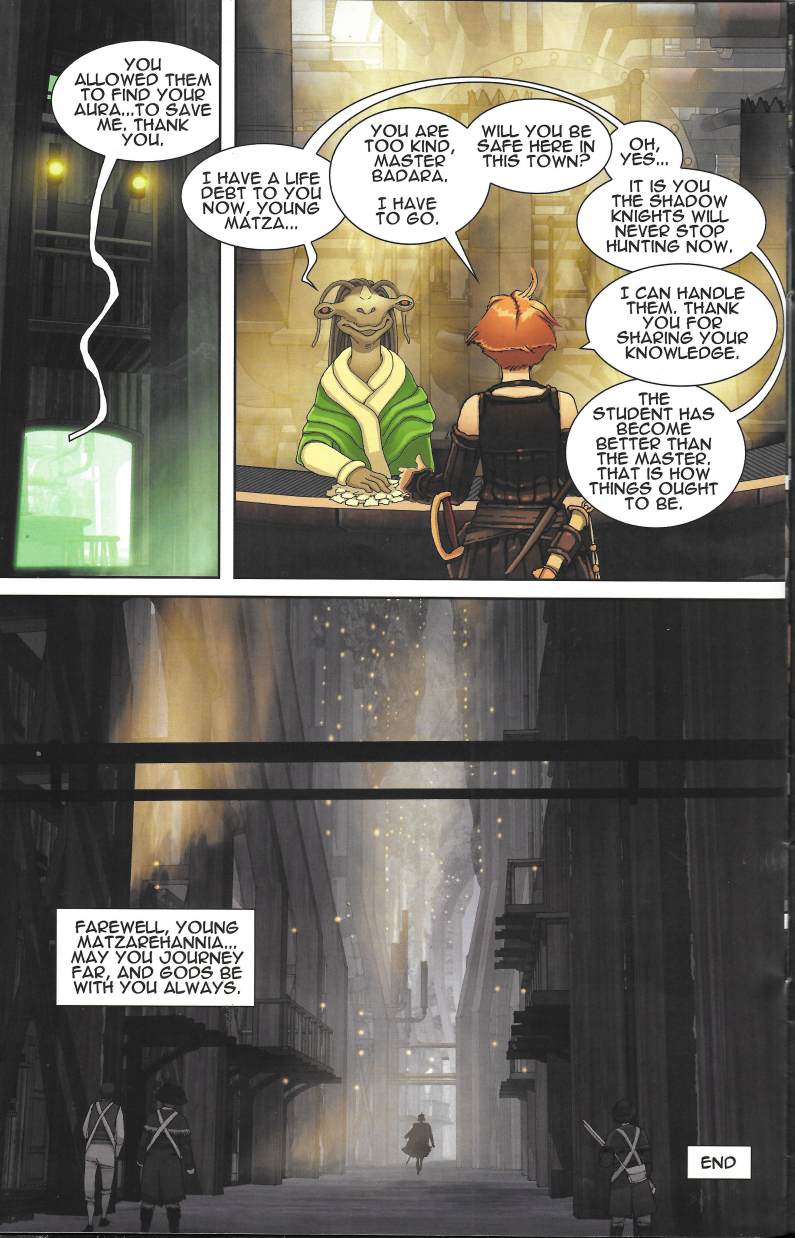 This is the very definition of forgettable.

And if you see these on the shelf, now that you’ve been warned, you’ll know to look elsewhere unless you are looking for lame action and no story. Here’s to hoping my Friday night finds the new Star Wars movie to have more going on than this. And for me to say goodbye to Carrie, who was a crush back when she wore her hair in honeybuns on the sides of her head.

See all of you in the theater.

(* The Asylum is a movie company that makes knock off direct-to-video titles like “Transmorphers,” “Snakes on a Train,” and “Atlantic Rim” that they hope your nearsighted Grandparent buys as a present to you. “Here Jimmy. I got that new Transformers movie you like so much.”)
Posted by SonOfCthulhu at 4:28 AM