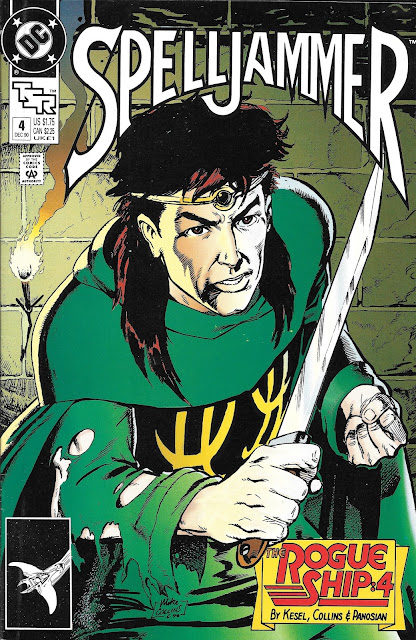 
In 1989 TSR released another in a series of new world-expanding box sets to the players of their popular Advanced Dungeons & Dragons role playing game. Spelljammer kicked open the door for new and exciting concepts to be grafted on to the “Lord of the Rings” style fantasy adventure setting players typically found themselves in. 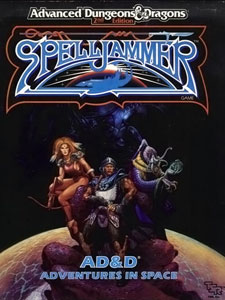 Up until 1984, the AD&D gaming system consisted of independent adventure modules that were typically assumed to take place somewhere on the world of Oerth, an Earth analogue created by Gary Gygax for his original campaign. Campaigns set in this world were usually referred to as Greyhawk adventures, named after the largest city and an immense castle / dungeon complex.


Under the direction of TSR, Laura and Tracy Hickman along with Margaret Weis came up with a new setting for adventures in 1984 called Dragonlance. The setting on the world of Krynn gave players an alternate world where knights rode dragons populated by new races such has the child-like Kinder and dragon-humanoid Draconians. Established in a series of novels, modules and a hardbound setting guide, the offshoot campaign setting became enormously popular.


Seeing the expanded sales in both game product and disposable fantasy fiction tie-ins, TSR spun off a new game world in 1987 that based on Ed Greenwood’s personal campaign. Started as a series of articles Greenwood wrote in Dragon magazine, Forgotten Realms became a canonical part of AD&D in a box set in 1987. Sales were brisk and both modules and novels flew off the shelves.


The writing was on the wall at this point. TSR saw the potential profit in releasing new fantasy settings, whether those came from actual modules or from the associated novels that were rapidly demanding their own section in bookstores. Thus, an ambitious five-year period of producing new boxed sets with different settings began, starting with Spelljammer. 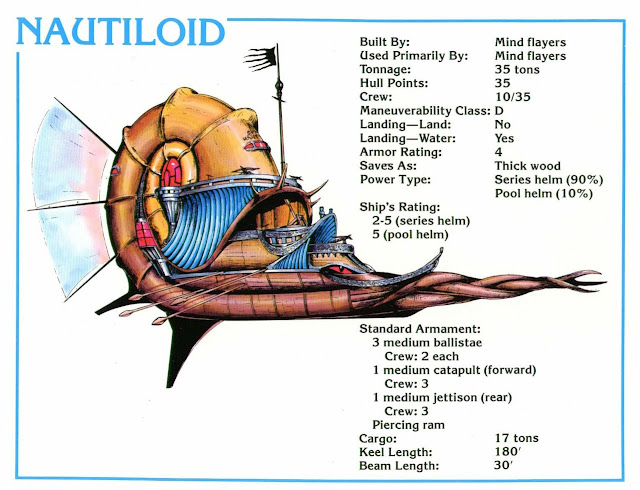 The concept of Spelljammer was to add Jules Verne type space travel to the AD&D universe. It proposed expanding the campaign into a fantasy version of space that would allow adventurers to travel from one planet to the next, perhaps from the existing worlds of The Realms, Greyhawk and Dragonlance campaign settings even. The mechanics of such travel were simplified in the extreme and it contained a few spacefaring races that made use of both new and old monster types. 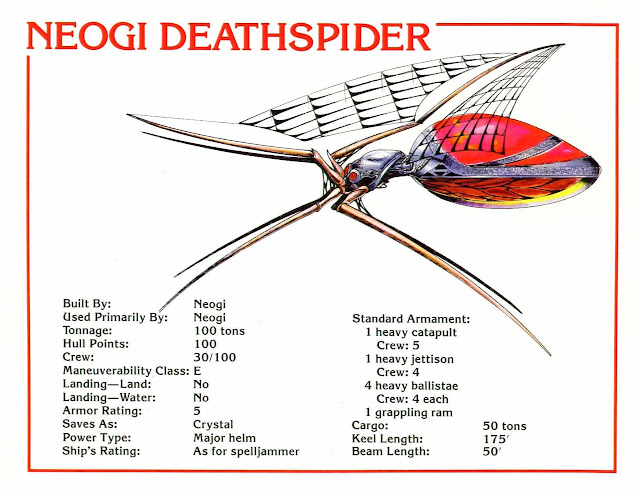 I was intensely excited about the Spelljammer campaign setting. Right up until a friend of mine got a hold of his copy and allowed me to see what TSR had wrought. The very talented Jeff Grubb hold the design credit for the setting and my criticisms need to note up front that I think he is an amazing writer and designer.


He just missed on this one.


What did he miss on exactly? Well, for one thing the setting in space has some great ship designs but he didn’t take the concept of a sci-fi melding with fantasy overtones far enough in my opinion. 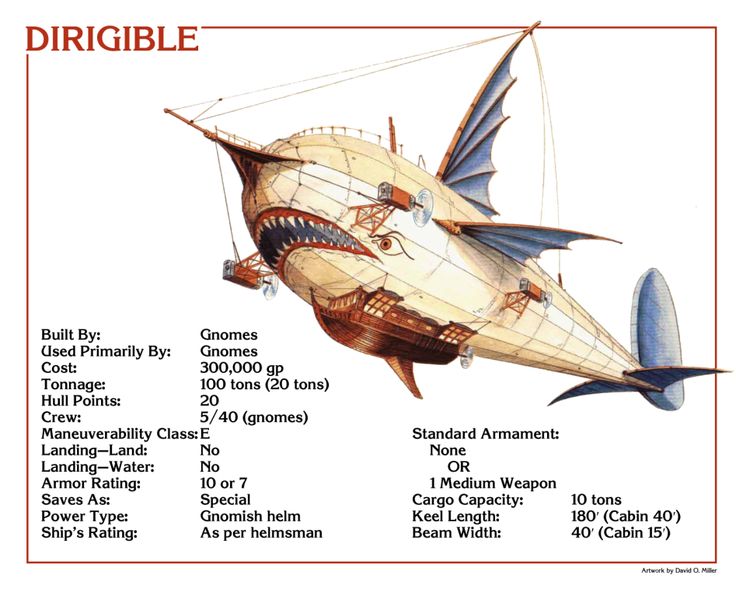 In the vastness of this expanded universe there should have been room to take decades of science fiction stories and pour those themes, archetypes,  and characters into his creation. Sure we have xenophobic Beholders and an Elvish navy, but where is the analogue to the Federation or the Empire? There doesn’t appear to be a centralized anything when it comes to governing and there should be something out there. The Giff are neat on their own, but why isn’t there a race that is looking to unite all the others in peace? And another looking to take what they need by force and guile? What are Spelljammer’s version of the Klingons? The Neogi is probably the best thing out of this setting, and even they don’t feel fully fleshed out. Where are the seeds of alien invasion b-movie goodness? 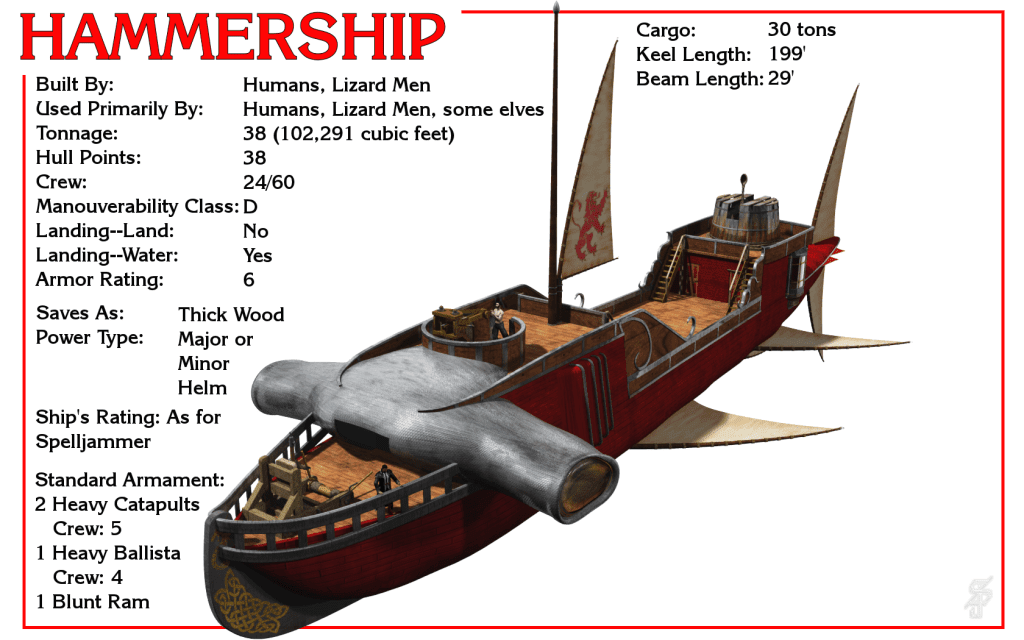 The other big gaff that Spelljammer stumbled at was the creation of a “new” combat system for these spaceborn galleons. The central tenant that ships contain their own gravity and when attacking one another they will align themselves along a shared horizontal axis with a defined “up” utterly destroyed my desire to buy any of the Spelljammer system. 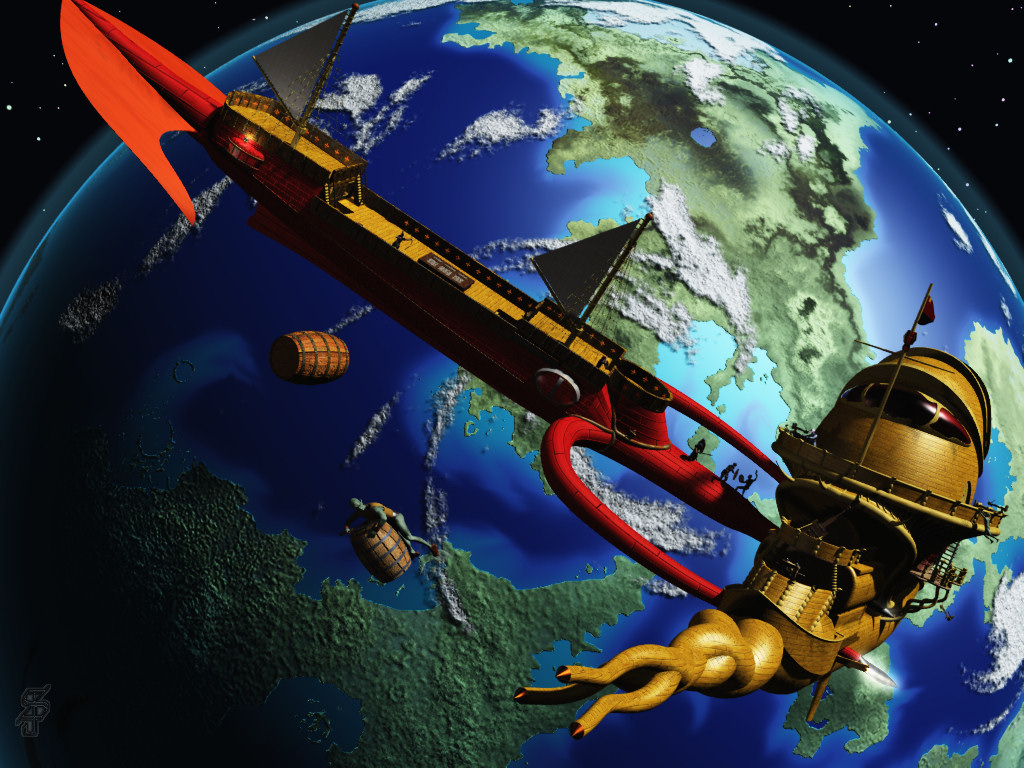 I wanted Star Wars type battles with willy-nilly vehicle combat along a three-dimensional plane. Reducing the space battles to the exact SAME THING AS WATERBORN SHIP-TO-SHIP COMBAT robbed the concept of one of its most thrilling promises. Where is the fun in having a smaller faster ship that could strafe a larger galleon from below or a large war-world bristling with weapons if the only way it gets to shoot are the same combat rules we’d been using for decades.


I wanted to say “Z-1000 meters!” in my fantasy campaign and it mean something.

I wanted to tackle an evil dwarven citadel with the same degree of energy as Luke tackling the Death Star.


I feel like this is what we got instead.


And don’t even get me started on what we missed by not having human-hating robot-golems from space.

What we did get were five novels of steeply declining quality and a DC comic book series that lasted nineteen issues.


We are jumping into book four of that series, the last bit of a four issue arc that involved the planet Unipaxala, a world of human-like pacifists who have hired a Spelljamming group of aliens from various planets to protect them from an invading force of Neogi and their willing Umber Hulk slaves.


Whew! That’s a lot to cover in a short sentence.

Eight members of our crew, including a young upstart Uniplaxalian named Tember are making their way off the docked Spelljamming ship under a cloak of invisibility. It must be mentioned that Tember is unlike the rest of his planet’s inhabitants in that he doesn’t eschew violence, even though he is terrible at it. The other seven members of this band are a pack of aliens that call themselves The Tribe. It is their magic that is keeping the group unseen by the numerous Umber Hulk guards. 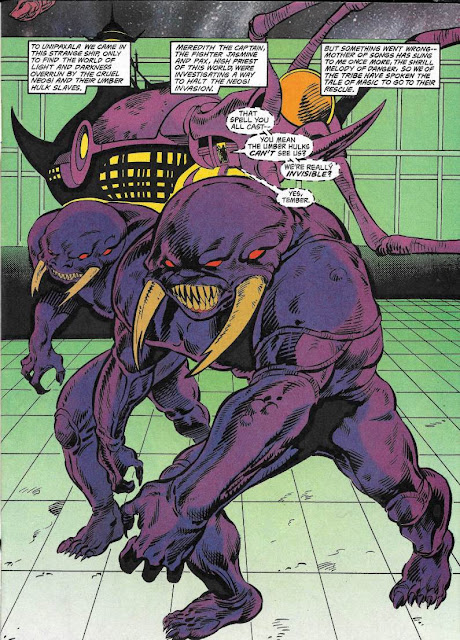 That and the fact that the artist has drawn them real small. And they are invisible, too. However, it must be said that all of these 90’s DC AD&D books needed better…something? Pencil-work? Inkers? Paper stock? I don’t know, they just looked crude. Anyway, on to what this group is going after. This room: 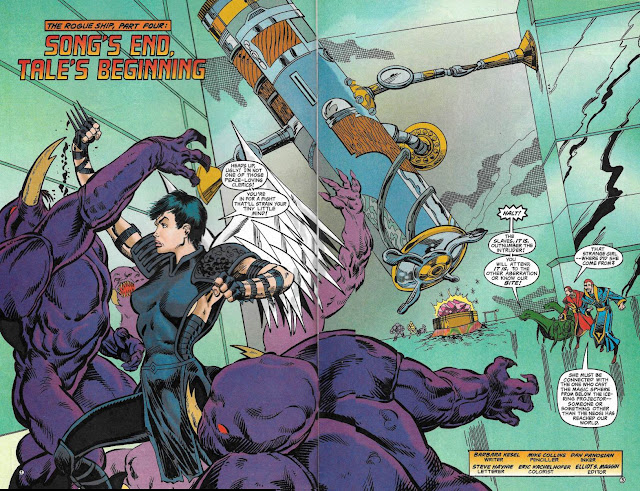 There is a McGuffin in play here, some kind of pink crystal-thing you see in the background there that does something that will stop the invaders if it is broken. This young lady with the wings and the rip-off Wolverine claws is trying shatter it. Her name is Jasmine. She’s a Avariel from the Forgotten Realms campaign setting.


The goofy green things are the Neogi, eel-headed, wolf-spider-bodied jerks who are trying to enslave this world’s people, perhaps to use as food. Oh, and their poisoned bite means instant death. Meredith, our skunk-haired ship’s captain is also skulking around inside a colorful Prismatic Sphere with Pax, a cleric of this world of pacifists. Meredith is going after the McGuffin crystal too when they were beset by the Neogi currently attacking Jasmine. Meredith wants to go help Jasmine, but Pax insists on coming along to save his people from traitors working with the Neogi. 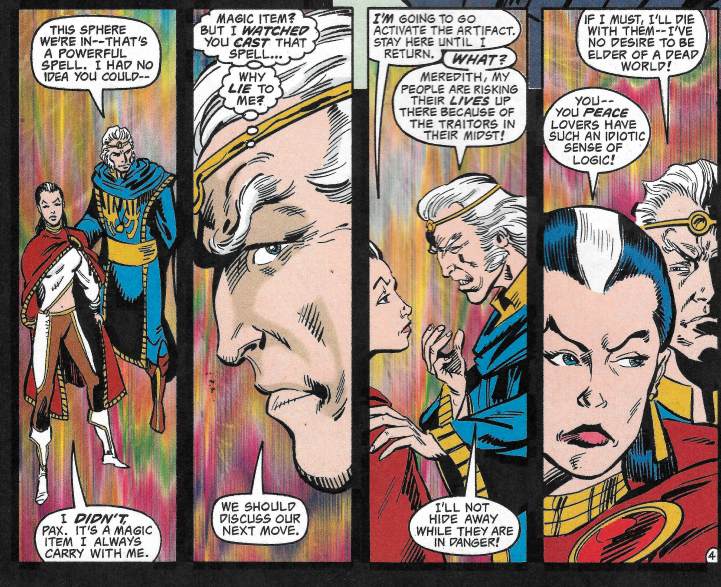 Again, we are four issues in. Don’t ask me to lie and tell you I understand what is going on here.


I do know that Tember and his seven “Tribe” people encounter two Neogi being carted around on the backs of Umber Hulk guards. The monsters’ discussion upsets Tember enough with thoughts of what they will do to his people that he’s ready to break the invisibility cloak and give them some smackdown action. 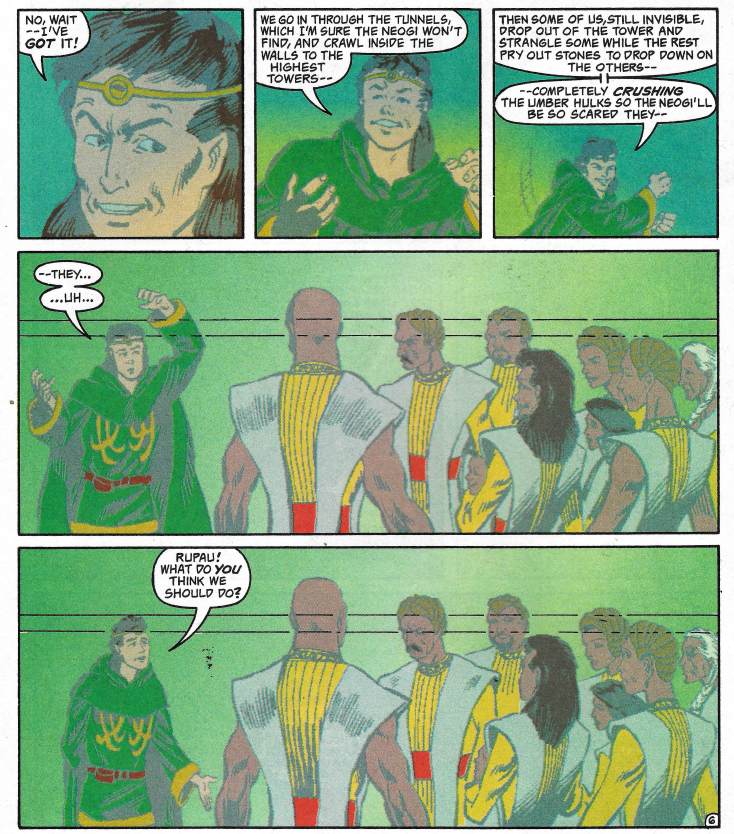 Tember is supposed to be the “fish out of water” of the series who leaves home to seek adventure and become a man. But that ain’t happening this issue. 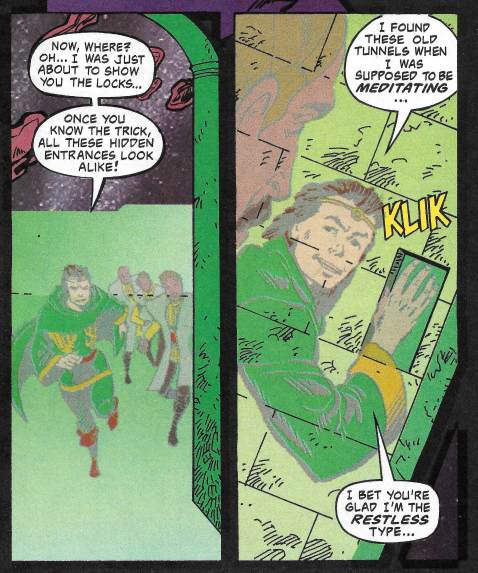 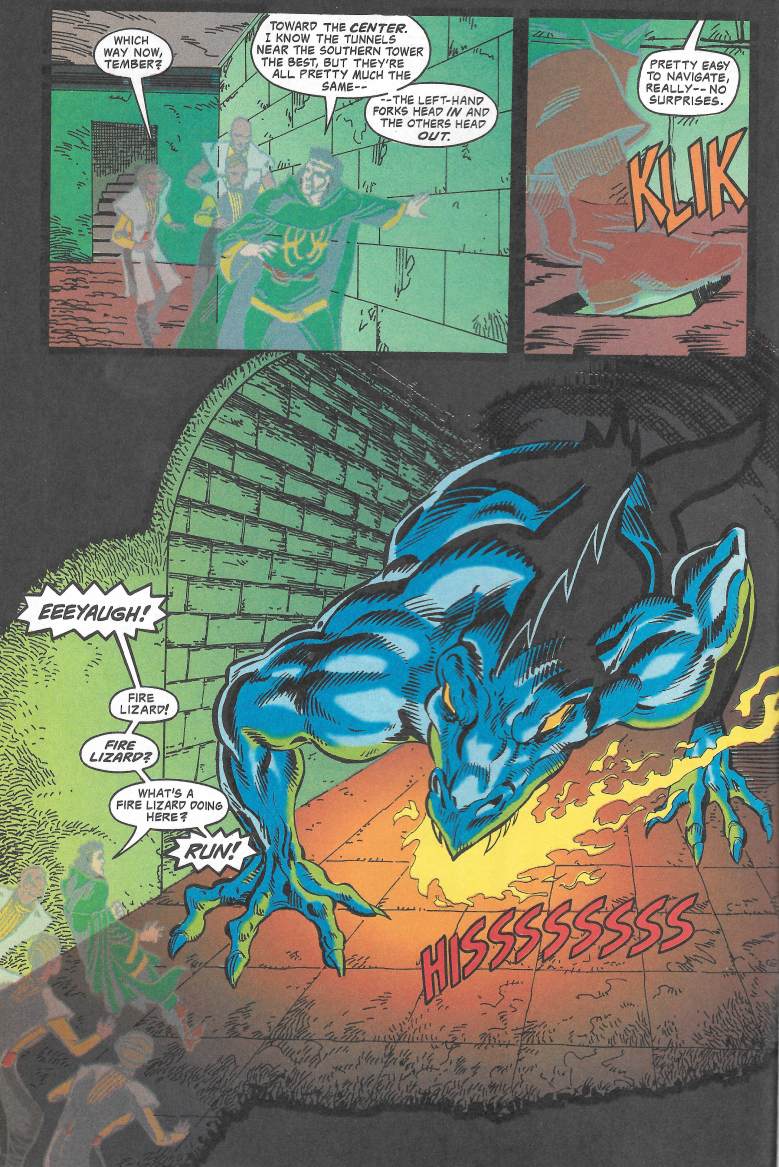 …so that the Tribe members can figure out it isn’t real before speeding off to the room with the McGuffin in it. Simultaneously making Tember feel like an idiot for not knowing his own people and their defenses, which he pretty much is. 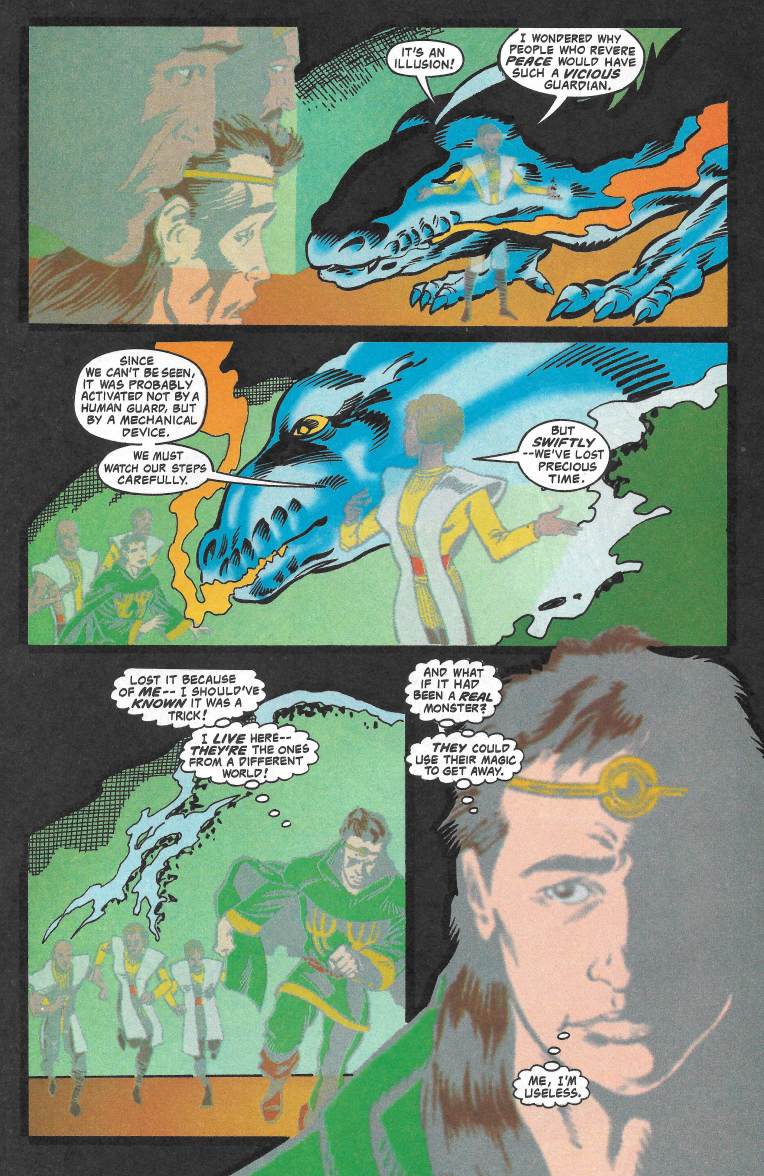 After a page of Jasmin almost dying several ways followed by the Tribe and Tember finding their way into the room holding the crystal, the two forces meet up. The Tribe bursts into action, including this one guy who just loves the crap out the Magic Missile spell. 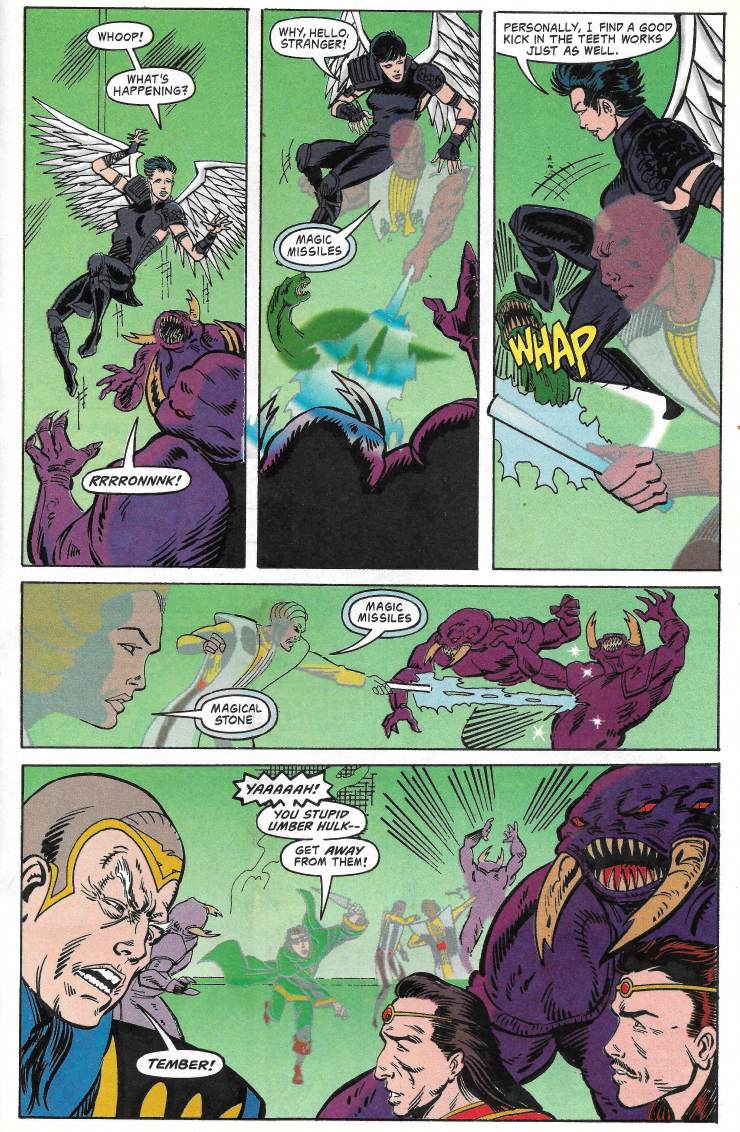 Captain skunk-hair and Pax decide it’s time to make a break from their rainbow hide out, while Tember convinces his people to at least pull pranks on the forces arrayed against him. 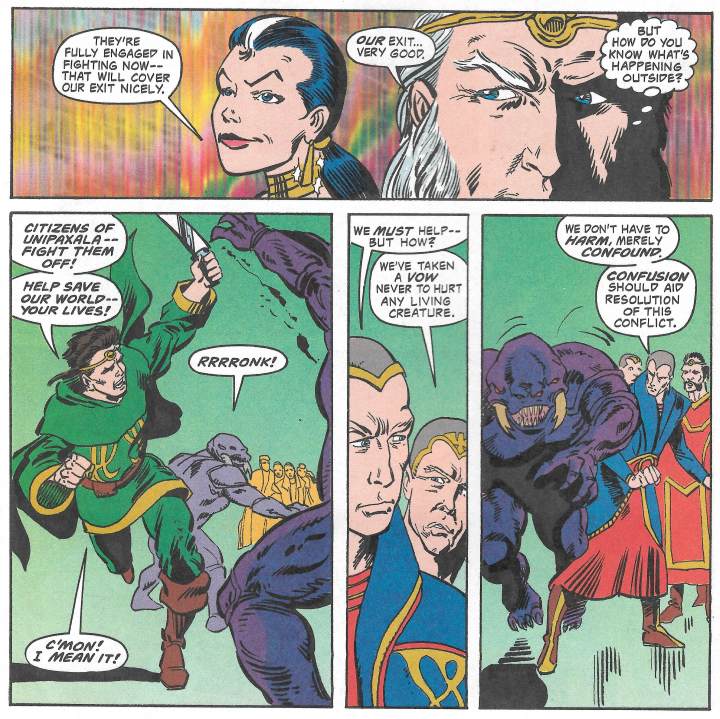 So now the battle gets real. One of the Tribe gets bit, but not sure if that means he bites it, and Tember is all stabby-stabby-stab-stab. 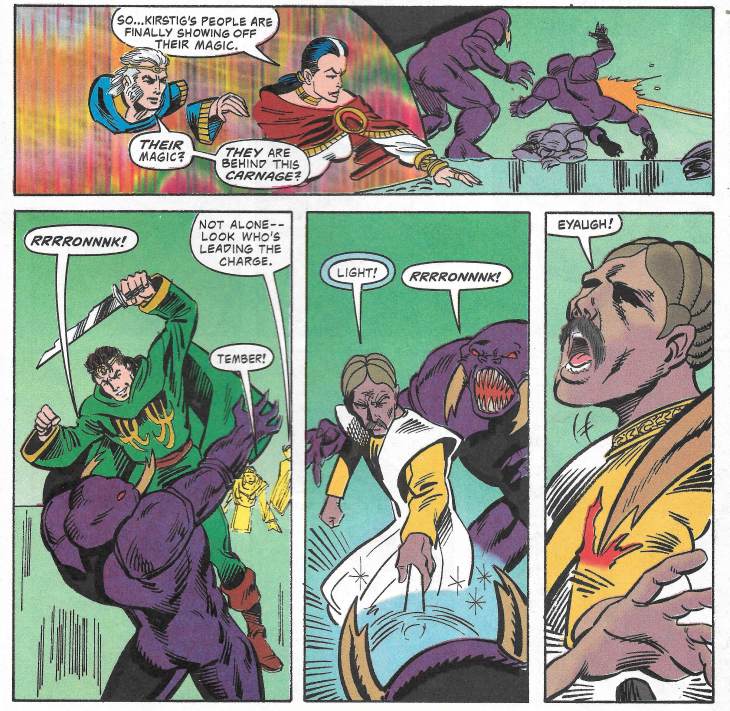 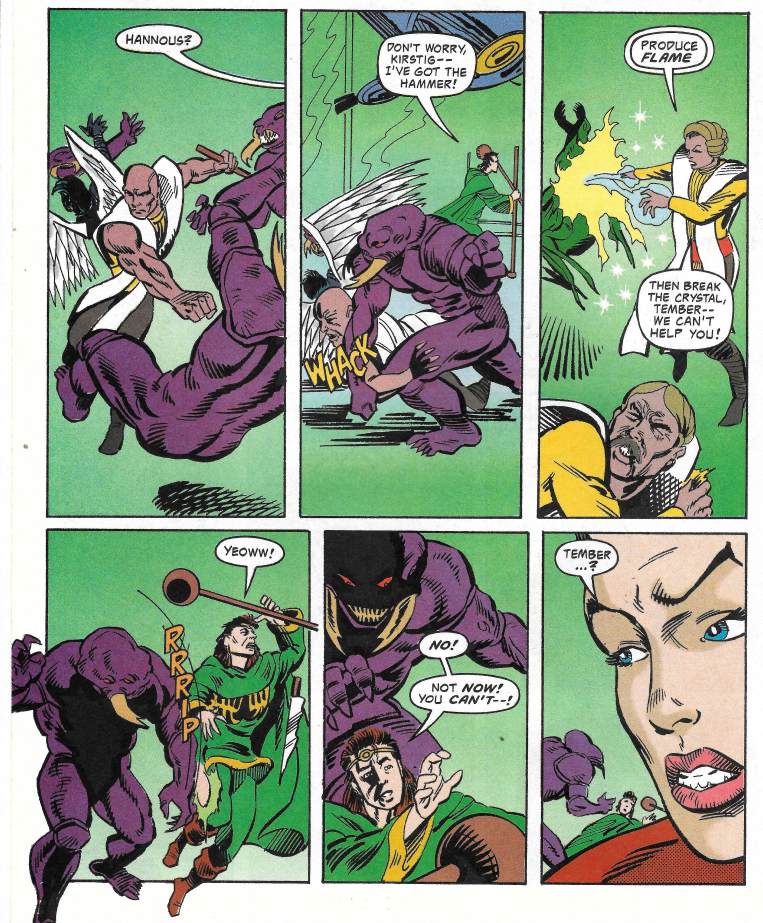 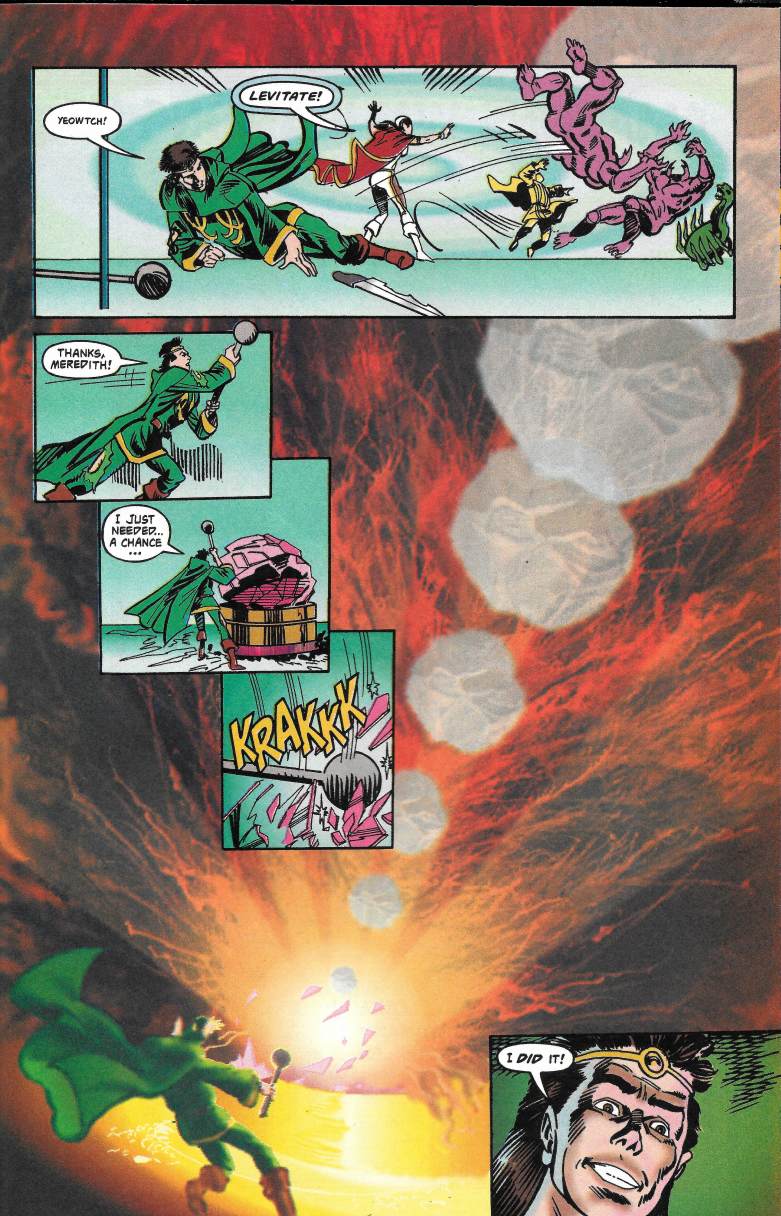 …not that I know what THIS is… 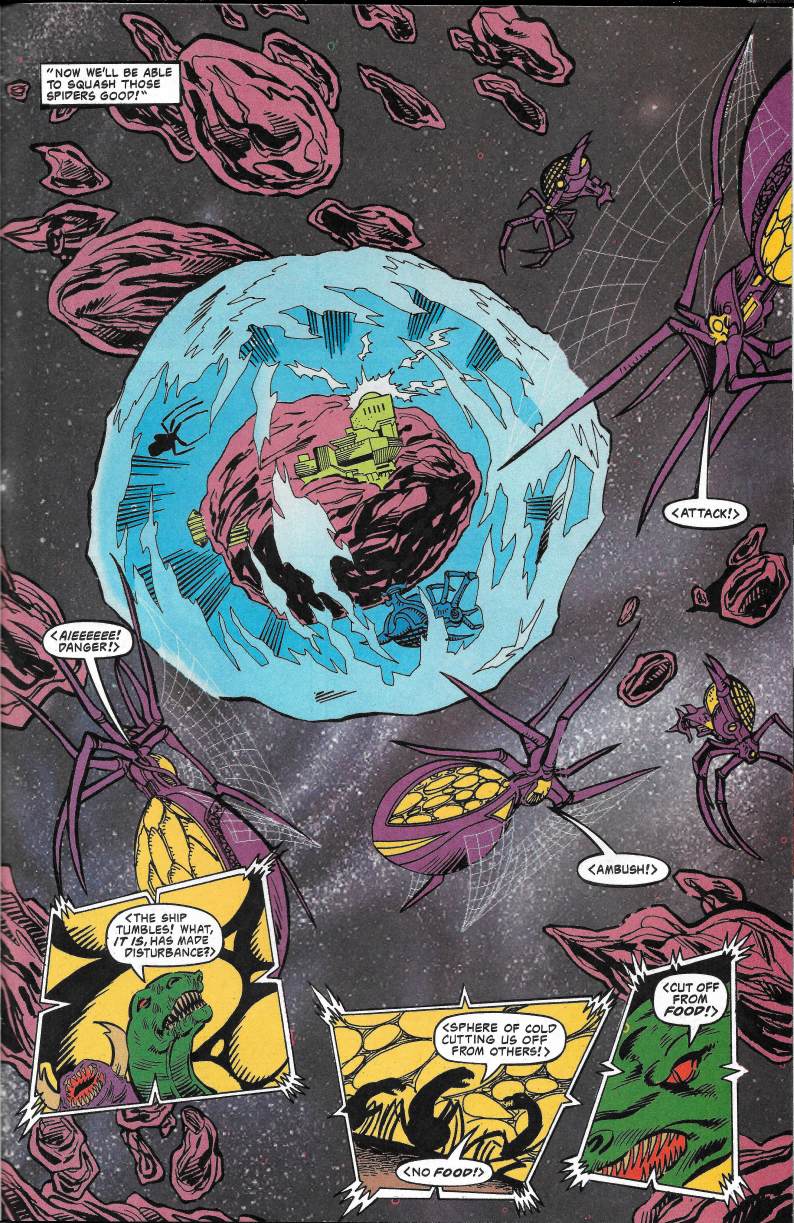 But it looks like it freezes the planet into a giant round ice cube. And this is a good thing?


Well maybe. It appears that no new Neogi spider-ships can land. But what about the ones on the ground already? 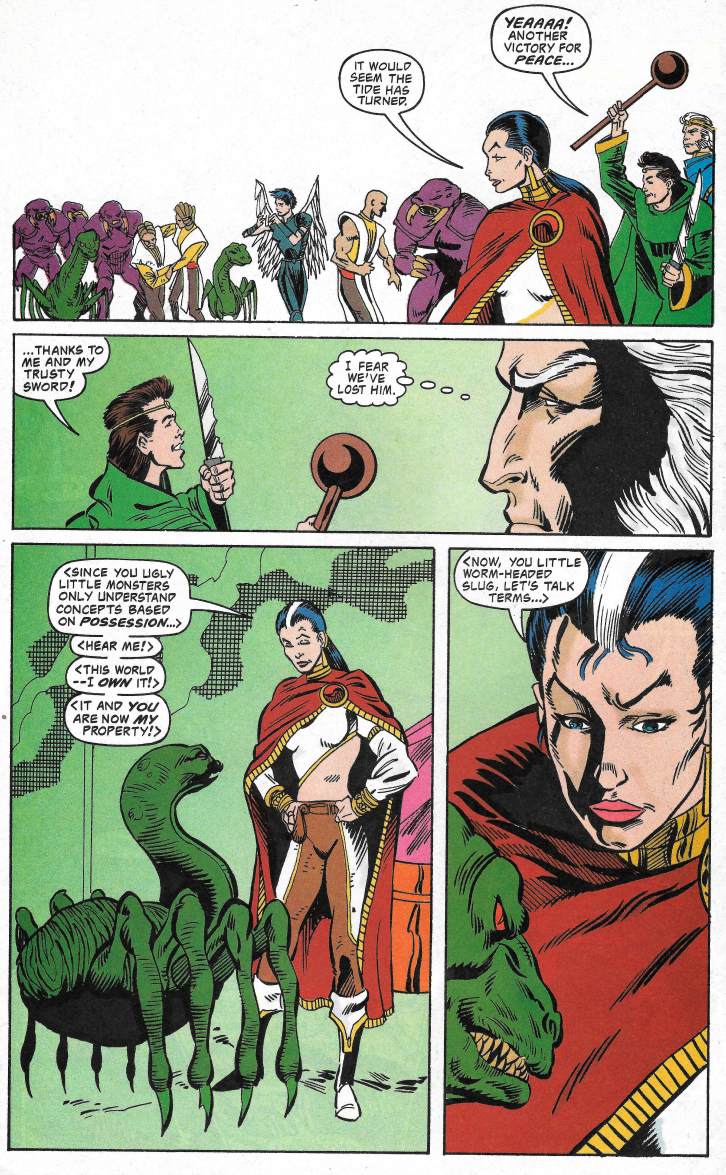 They give up completely. Because plot and stuff.


Tember feels like a hero, which he is and Pax worries that he has lost him from ever joining with his people and being all pacifisty, which is possibly the case.

Then the Neogi are forced off Unipaxala, instead of being killed, which perhaps sets up a future issue. Tember feels like he has no places with his people, which will lead to him leaving. The Captain vows that all Pax has to do if the Neogi ever threaten them again is light this skunk-shaped searchlight and point it into the night sky and she will return to kick spider-crit butt. 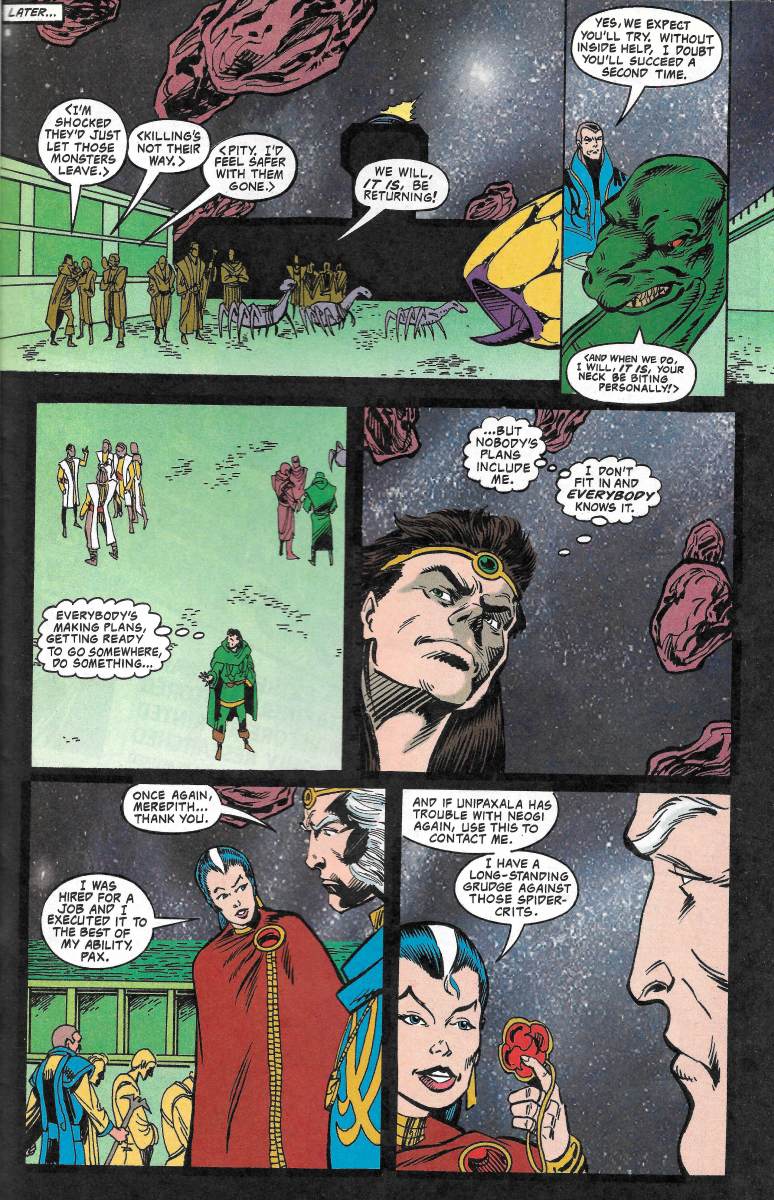 And it is at that point that the elders of Unipaxala GIVE Tember to Meredith, which leads to this rather humorous thought by the good captain. 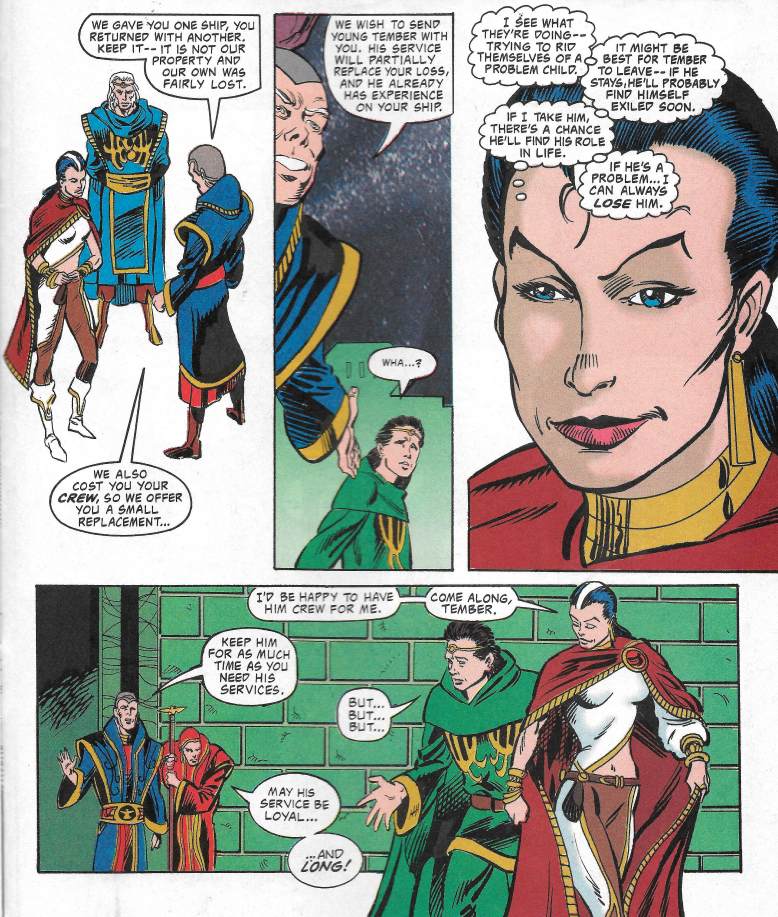 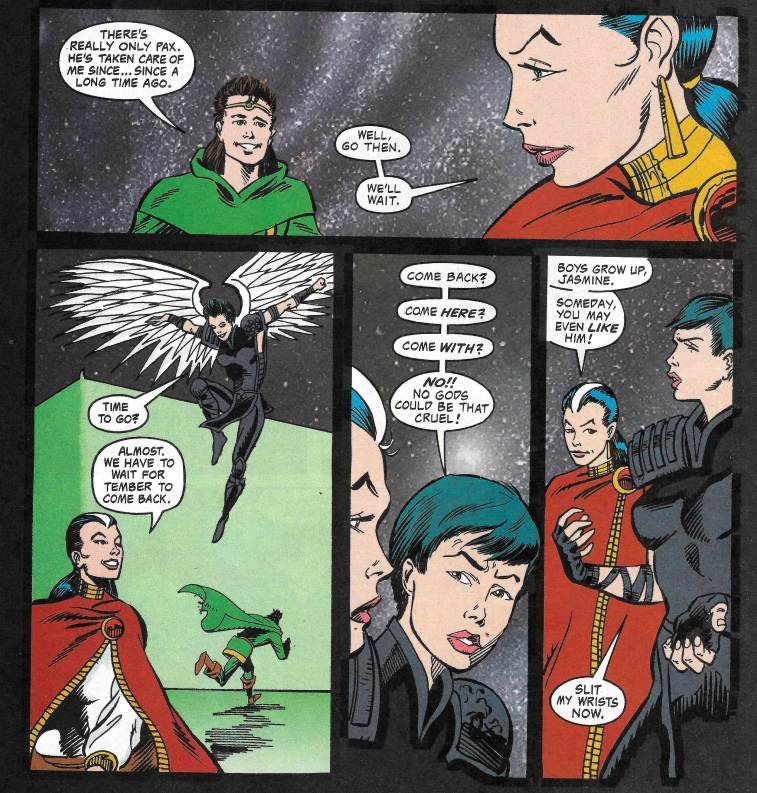 …and to complete our ragtag band of misfits, the Tribe decides they will also be coming along, meaning we have our crew for the series. And then Meredith gets to do her Star Trek-y “First star to the right and straight on till morning” bit. 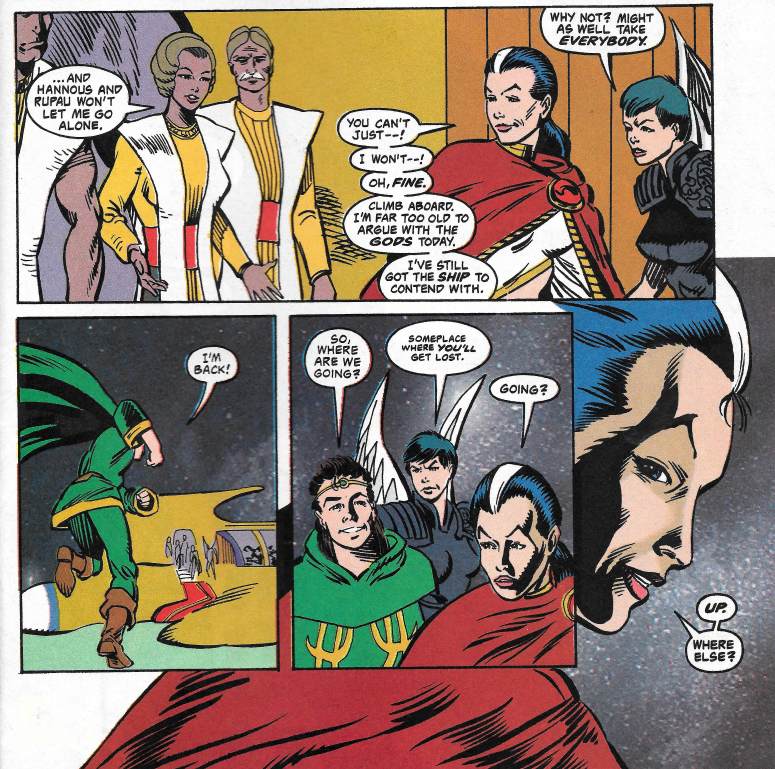 With that, the crew of the Spelljammer flies off into the night sky… …and out of my thoughts completely. This isn’t a good introduction to these characters. I feel I barely know their motivations for anything, including Tember, who appears to be the lead. I hope the prior three were much better at rounding these folks out to full fledged “people” and not paper cutouts.


As for the action, it was okaaay, I guess?


The McGuffin could have been explained a little more, perhaps with a bit of exposition over the graphics on those pages. I feel the book was kind of thrown together plotwise and not much thought to narrating the story to help it flow better.


Would I pick of more of these? Probably not. I know that I wouldn’t have wasted $1.75 on it back in my buying days, but even at half that price, they are nothing special. Just like the AD&D rules themselves, these are a miss.


Which is sad, because I see so much wasted potential there...
Posted by SonOfCthulhu at 3:15 AM