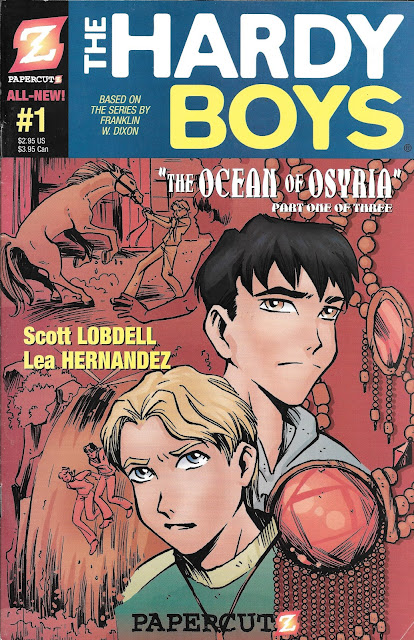 It’s about teen and pre-teen empowerment 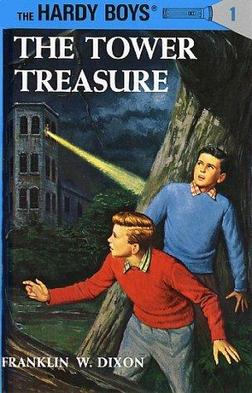 The Hardy Boys are about two teenage brothers who spend their free time as amateur detectives. Their father, detective Fenton Hardy, typically works on confidential cases that Joe and Frank Hardy nose their way into, sometimes when asked but oftentimes on their own. More often than not, the brothers are the ones to solve the cases, catch the villain, and unravel the mystery.

These books are pure young adult wish fulfillment and while I didn’t think they were awful, my penchant leaned more toward The Three Investigators. They had a better clubhouse and they knew Alfred Hitchcock.

But I did own and read several of these as a boy.

The concept of The Hardy Boys was created by Edward Stratemeyer, founder of the Stratemeyer Syndicate, a book-packaging firm. The Syndicate hired Leslie McFarlane to ghostwrite the first volume in the series, published under the pseudonym Franklin W. Dixon. McFarlane would write nineteen of the first twenty-five volumes in the series. The Dixon pseudonym would be used by every ghostwriter of Hardy Boys books from then on.

Due to changing culture norms, the books have been heavily revised over the years to remove racial stereotypes and simpler language to compete with television. The books still sell over a million copies a year and have been translated into more than 25 languages. They’ve jumped from page to screen no less than five times, including appearing as a running serial on Disney’s 1956 second season of The Mickey Mouse Club starring Tim Considine and Tommy Kirk in the title roles.

Perhaps more popular and certainly for me, more memorable was the ABC series from 1977to 1979 starring Parker Stevenson and Shaun Cassidy as Frank and Joe with frequent appearances of Pamela Sue Martin and later Janet Louise Johnson as Nancy Drew.

Dynamite currently holds the license, but the Crapbox provided this earlier Hardy Boys title under the PapercutZ imprint written by Scott Lobdell, writer of the movie Happy Death Day, and comics Red Hood and the Outlaws and a stint on Teen Titans.

For me the book is this huge mixed bag. It is an enjoyable read that updates the characters while retaining the parts that made the series relevant to generations of readers. It also has the most gawd-awful, simplistic manga-tinged art that I’ve ever seen, some of it boarding on preteen amateurism. Let’s dig in and I’ll show you what I mean.

We begin with Joe and Frank at a farm in the middle of nowhere. Joe is trying to calm a horse down. It quickly comes together that this isn’t the boys on a summer camp break. 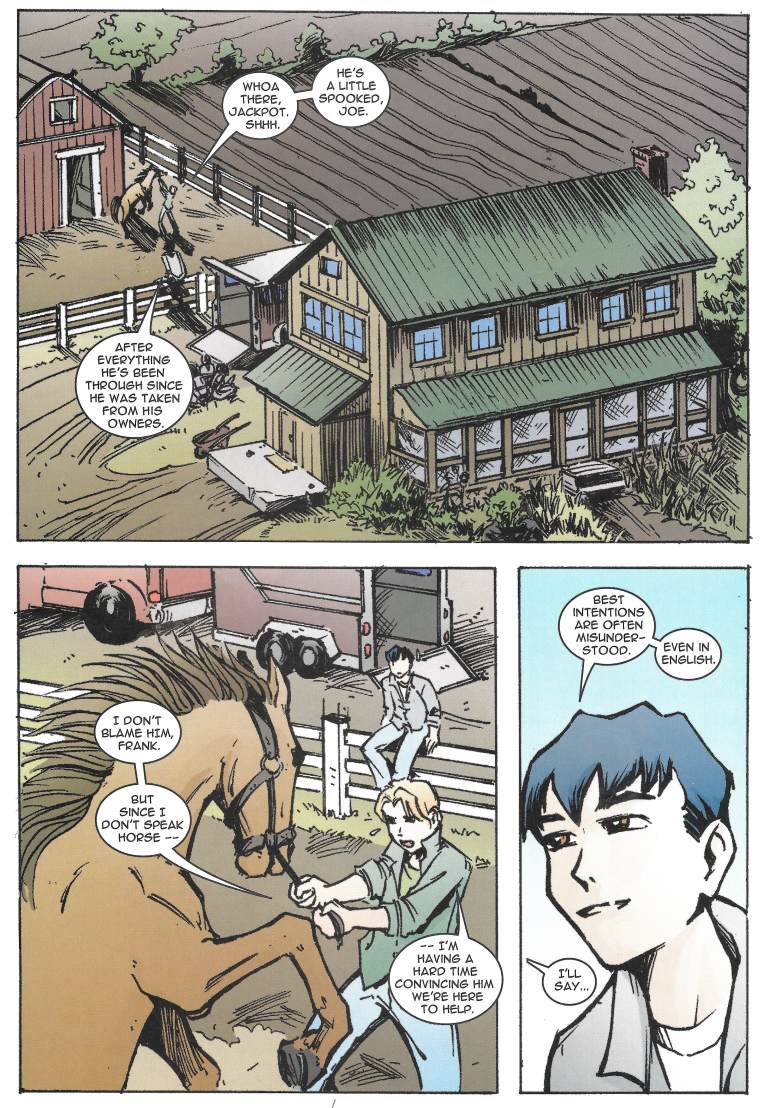 The horse is “Jackpot,” a Kentucky Derby contender who was liberated from his owner by animal rights activists who sloppily haven’t thought through what to do with him. Joe loses the reins at this moment and we get a glance at the activists who have been captured, tied up, and plopped on the ground behind the boys

Frank tries his hand at taming Jackpot, to much the same effect. (ugh! Manga sweat and bad head profile drawing) 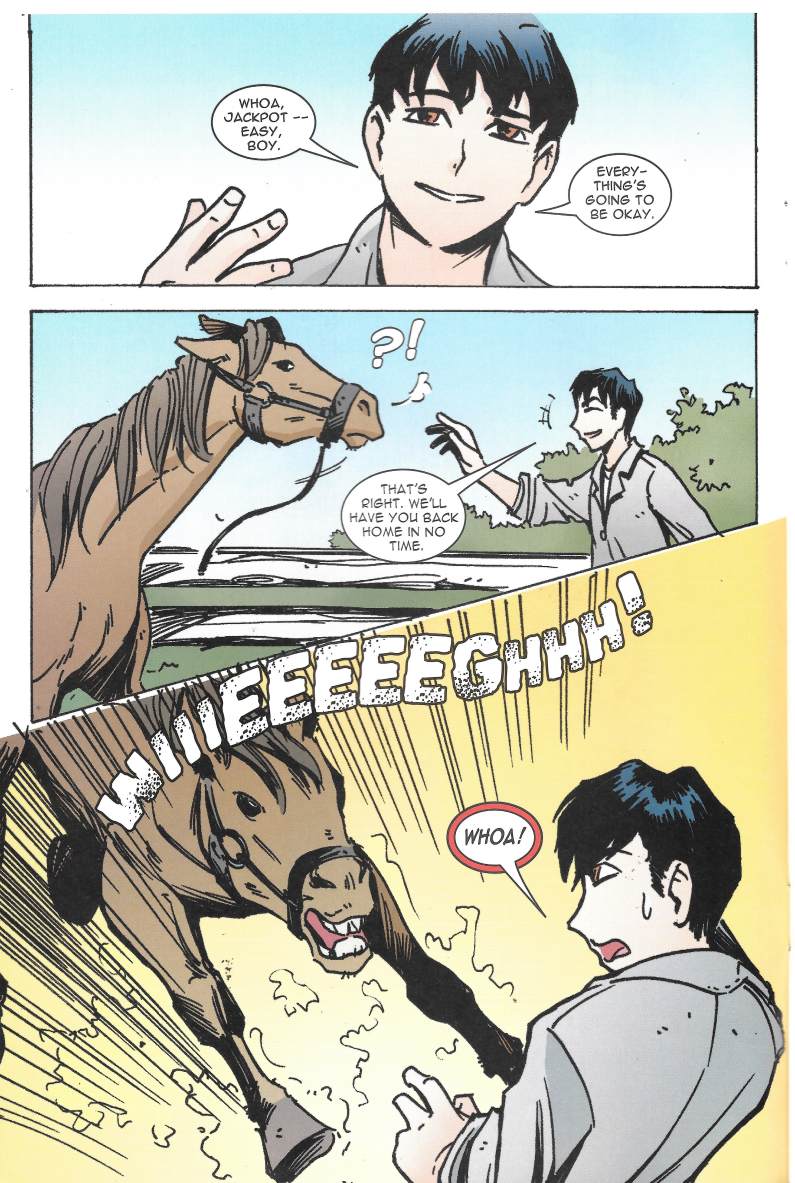 The horse takes off, causing Joe to nab Frank before he is trampled…and we have our first thrilling action sequence. Aside from all the things the art is doing wrong, some part of it must work because I am pulled into the story and from this point on the book pretty much has its way with me. 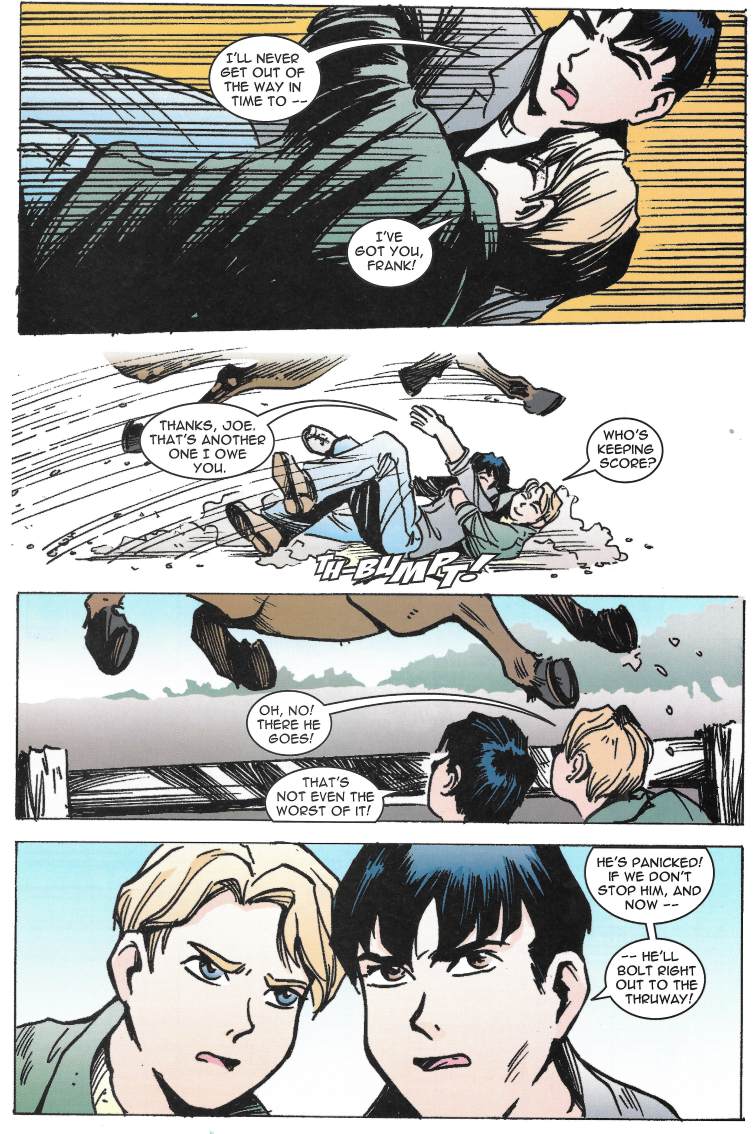 The misguided PETA-brains cheer as the horse takes off toward freedom (and a busy expressway) while Joe takes off after the horse on foot. His running dialogue to Frank points out the differences between the two brothers: Joe is the younger, more impulsive brother and Frank is the older, diligent researcher. 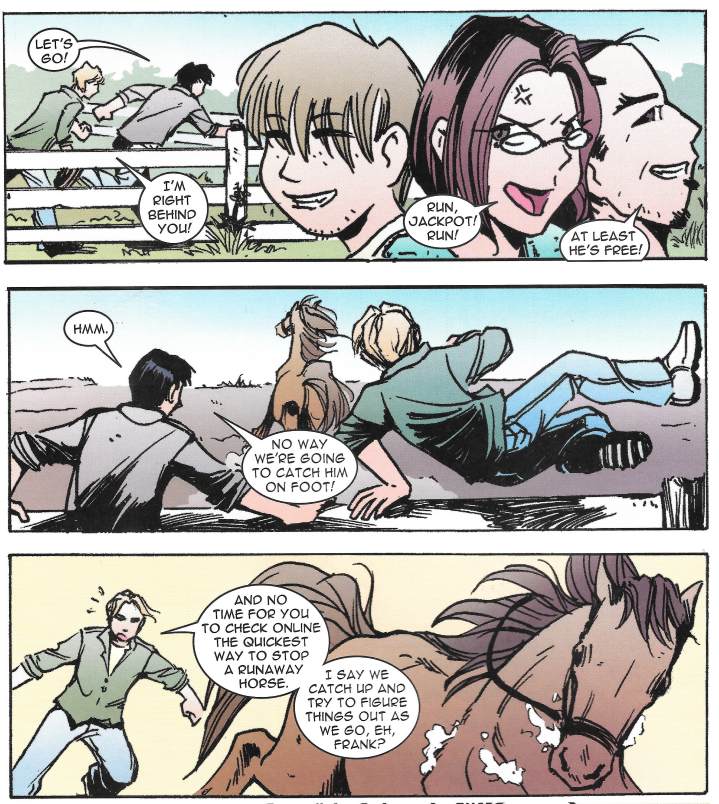 In some awful bad panels, Joe finds Frank hasn’t given up, but instead hotwired a motor bike to race after the horse. In a flash the pair are off to catch a Jackpot, hopefully before a semi on the freeway does. 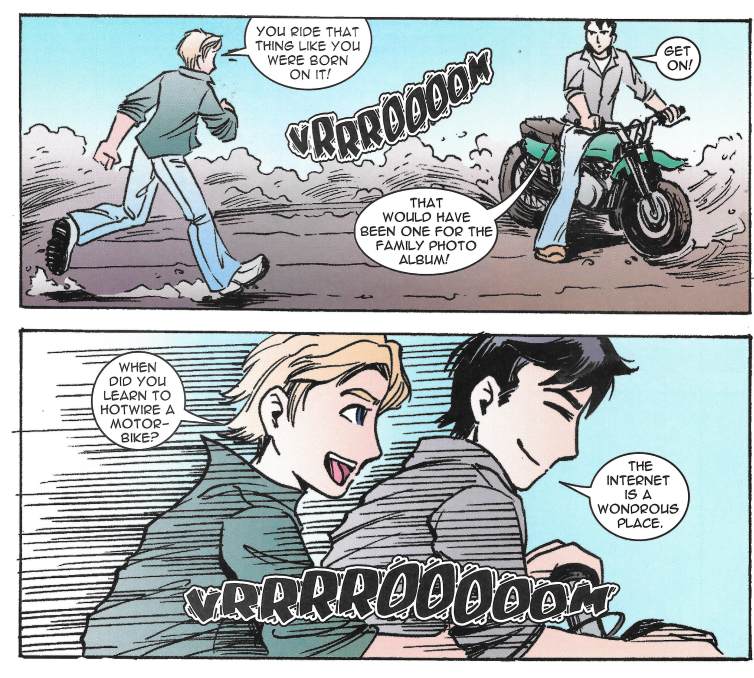 And they catch up to Jackpot with Joe leaping onto the horse’s back from the bike. 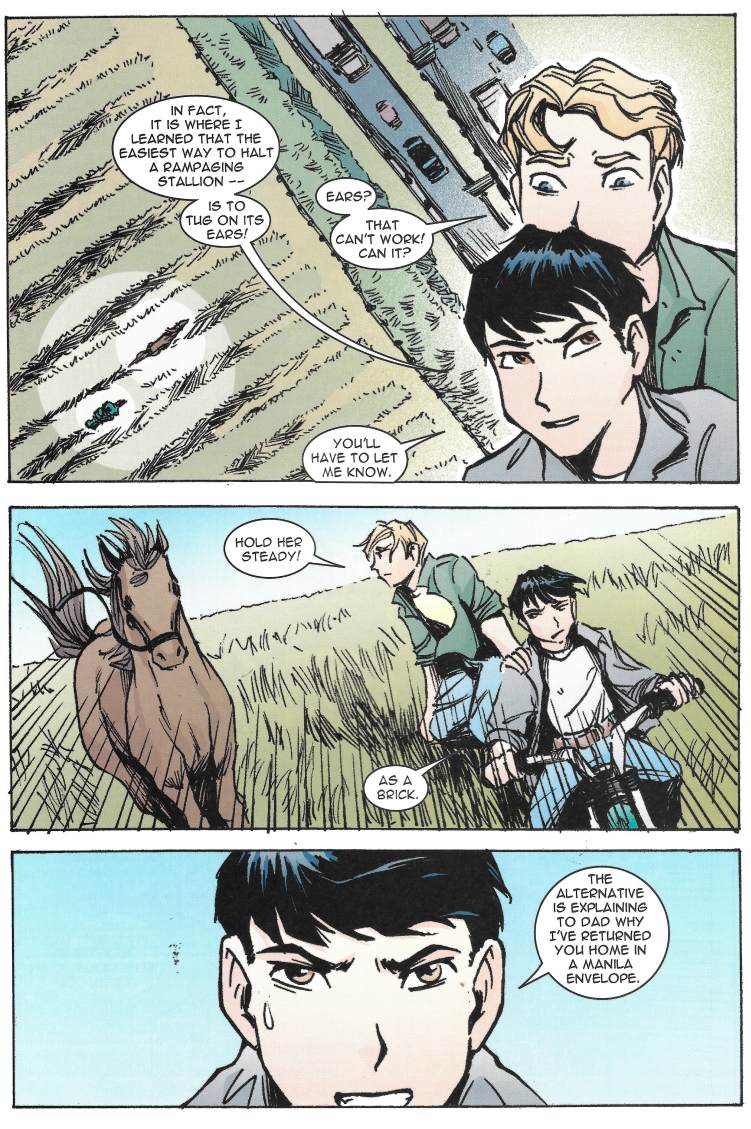 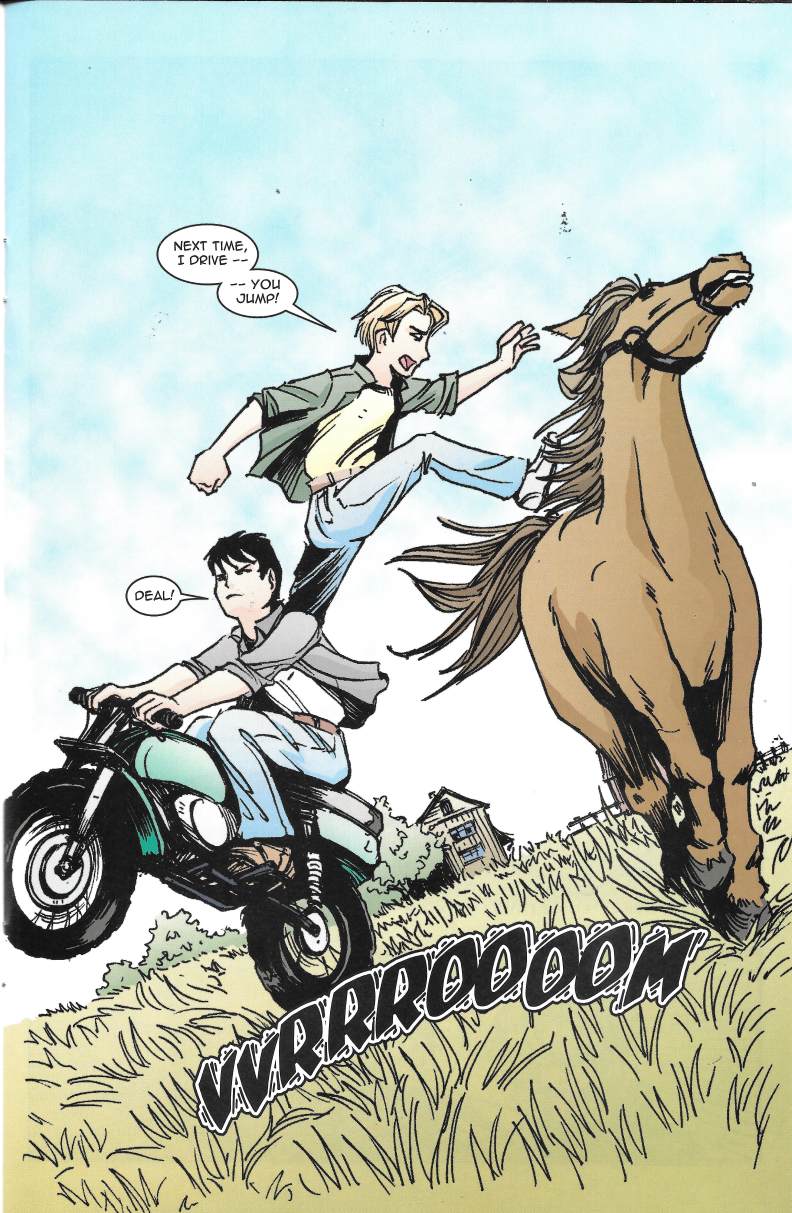 Now to see if Frank is right about that ear thing. 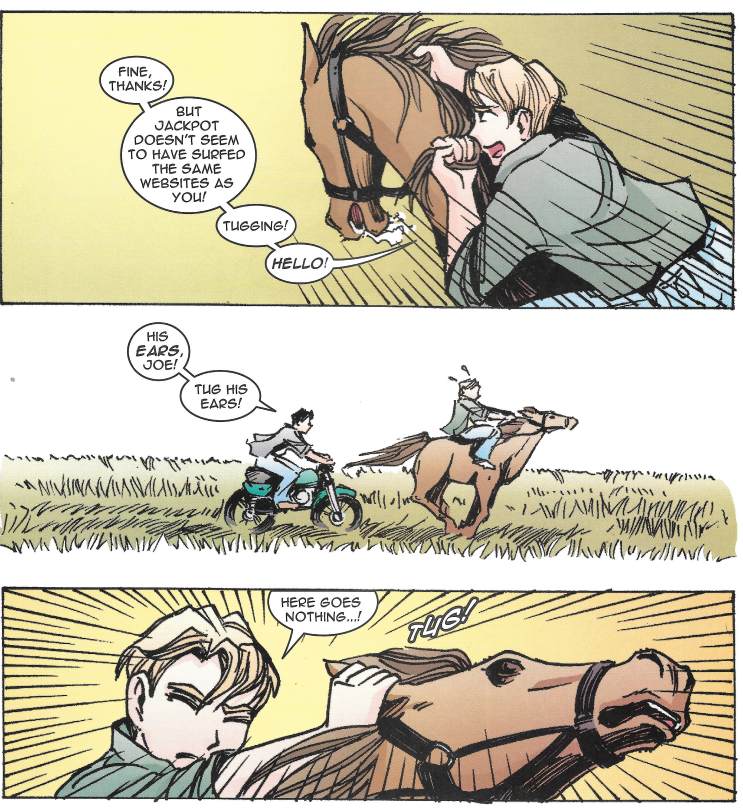 And the boys successfully save the horse. This is a great opening. It does all the things we need it to do. We get a burst of action, a quick counterpoint of Joe and Frank’s differences shown through their reactions in a crisis and a feeling that these two are likable people. Lobell knows his stuff. 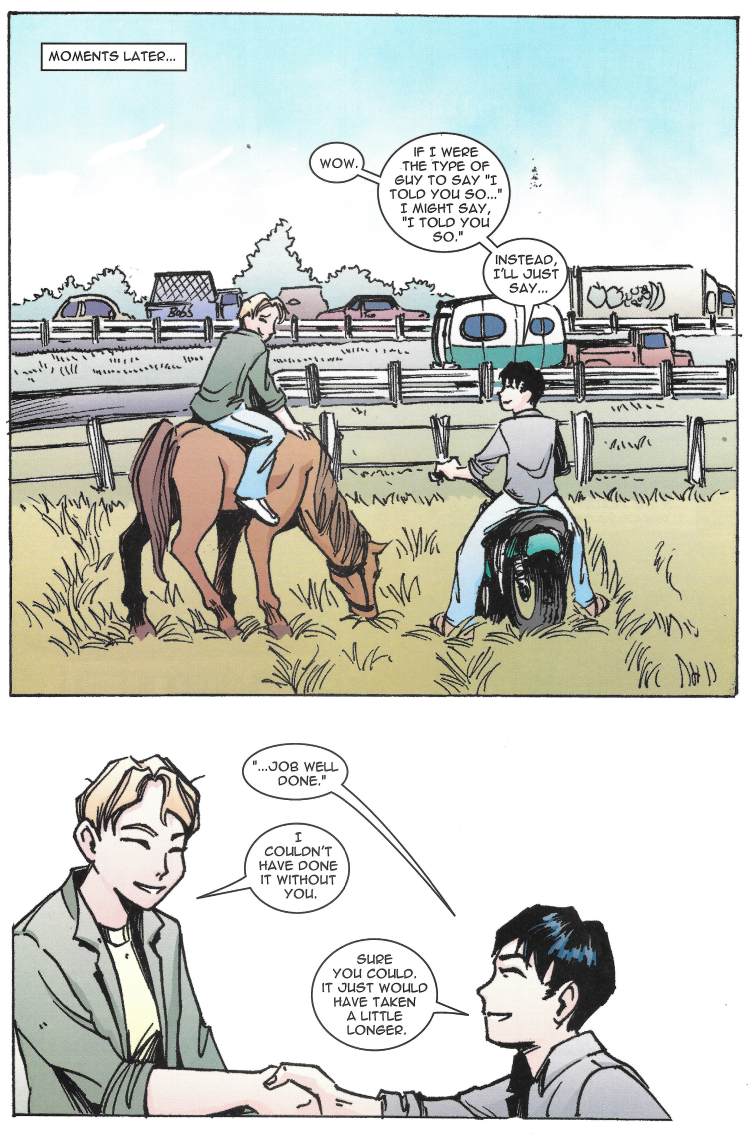 We move on to the second “chapter” in the comic, we find the Hardy’s at home. Joe is exercising while Frank gives really sketchy computer password advice to his father. 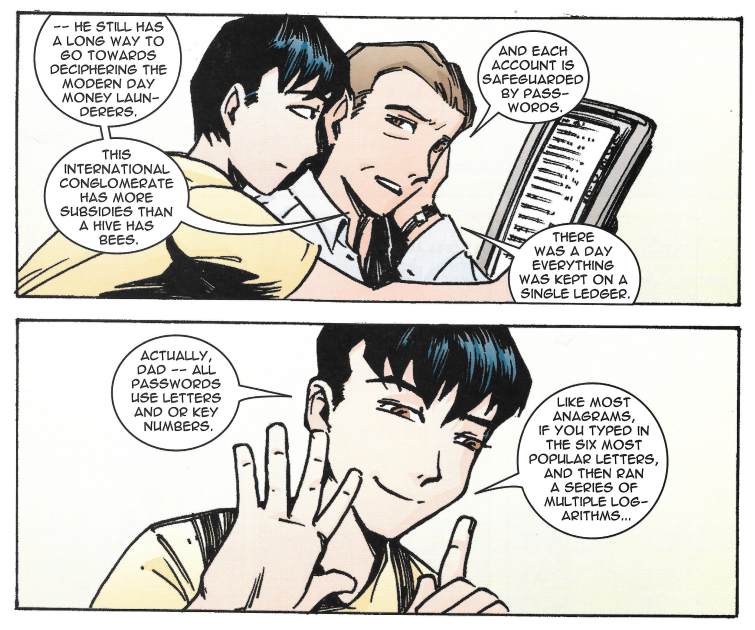 I’m pretty sure that is not how it works. But okay computer hacking in 2005. You do that thing. 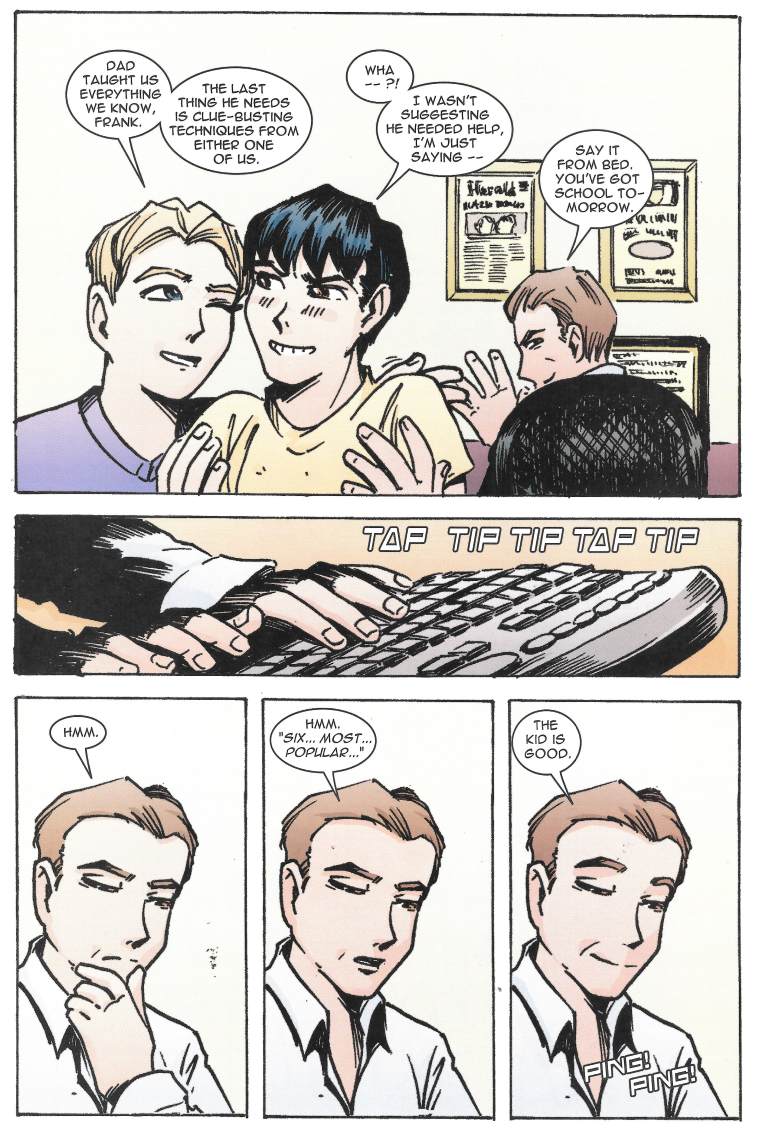 And while we are on the subject of technology… 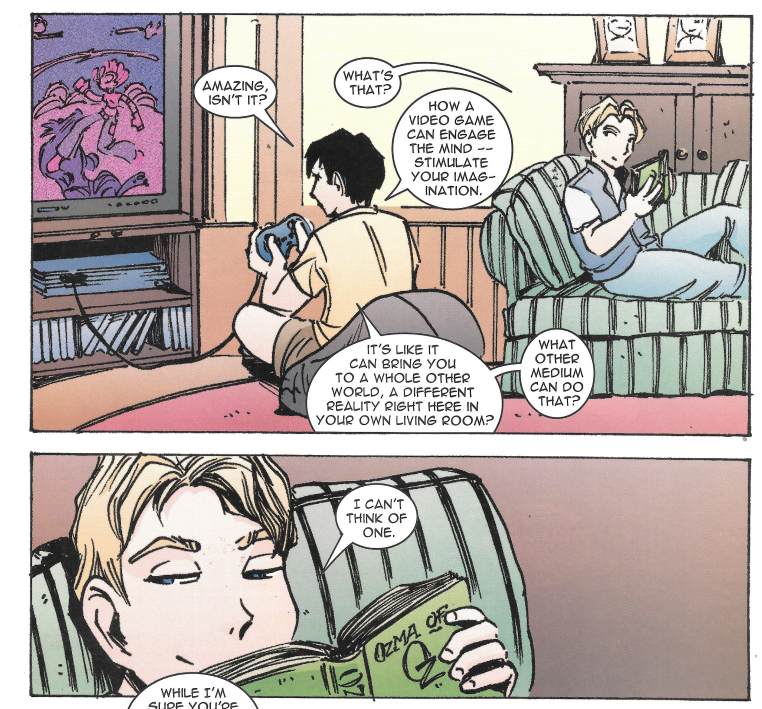 …the only thing I don’t like about this is that the boys are like perfect models of what well-mannered children should be. They follow in the footsteps of their novel counterparts in this way. No infighting, no roughhousing, no heated arguments. It might as well be a parenting fantasy novel about well-behaved children in some ways.
That was all for chapter two, just an introduction to Mom and Dad Hardy with a few lines of character dialogue to cement the boys as perfect Mary Sue types. As if to make that more clear, we have this bit taking place the next day as the kids happily go back to school (again, parent's fantasy ideal). 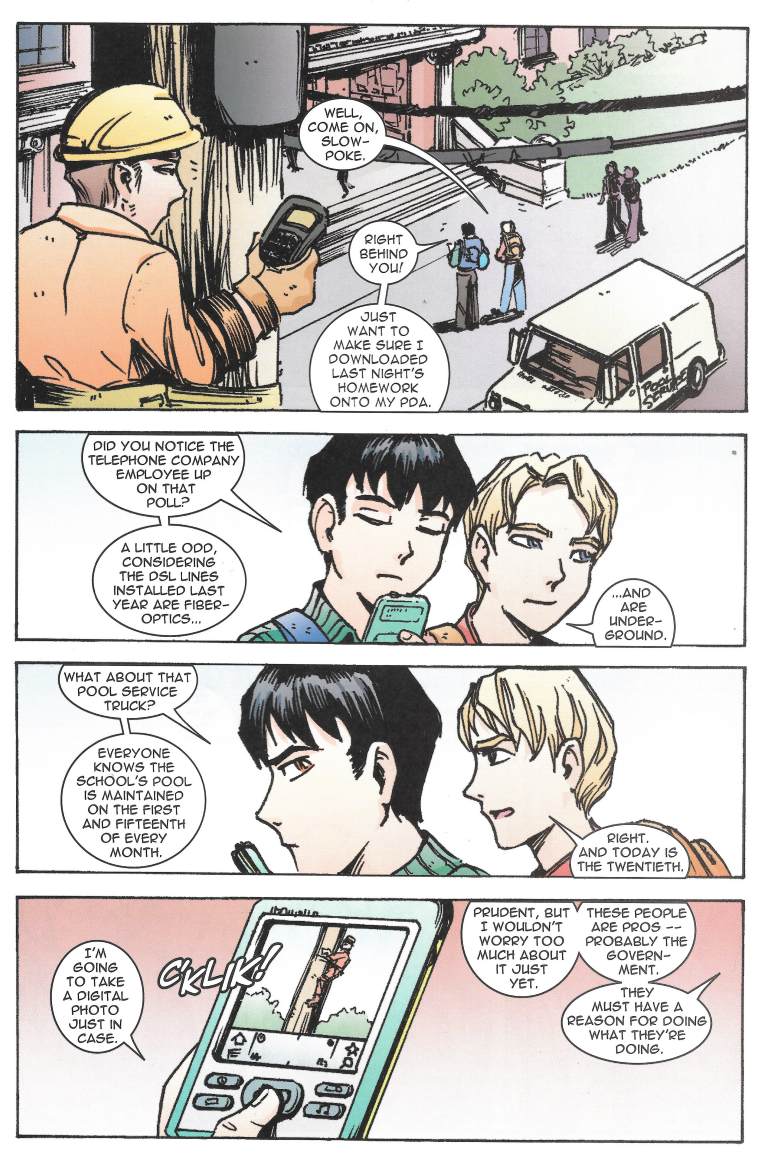 I have to state that upon first read through, all of this felt in service of the plot. I enjoyed that the pair were smarter, kinder, and superior in every way to everyone else in the story. It is fun in a James Bond kind of way.

On second go around there are plenty of things to laugh at though. Such as Joe being able to recite the definition of a cumulous cloud from memory, even when distracted by his girlfriends’ presence… 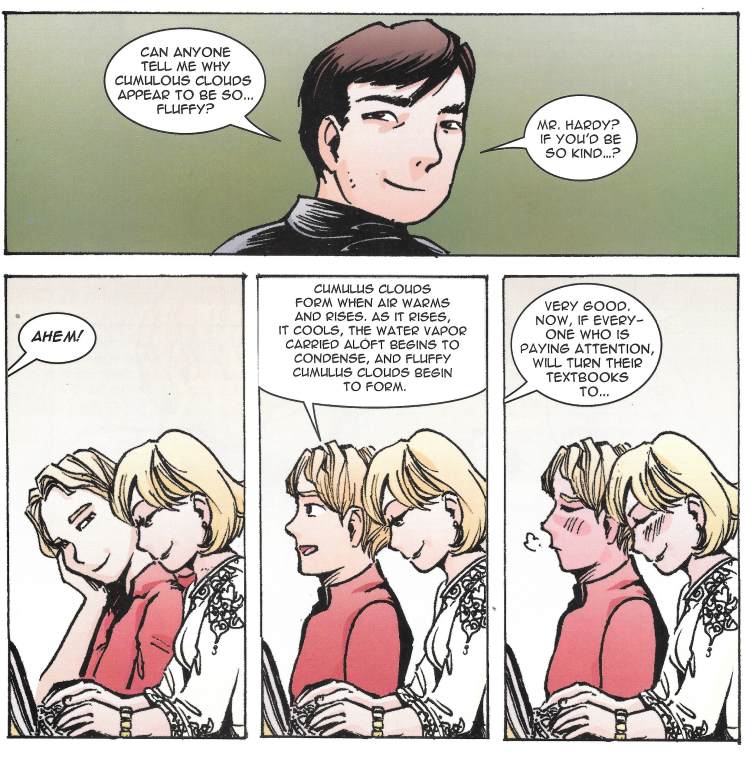 …to him picking the loser kid first in PE and then giving him a rousting, feel-good speech. 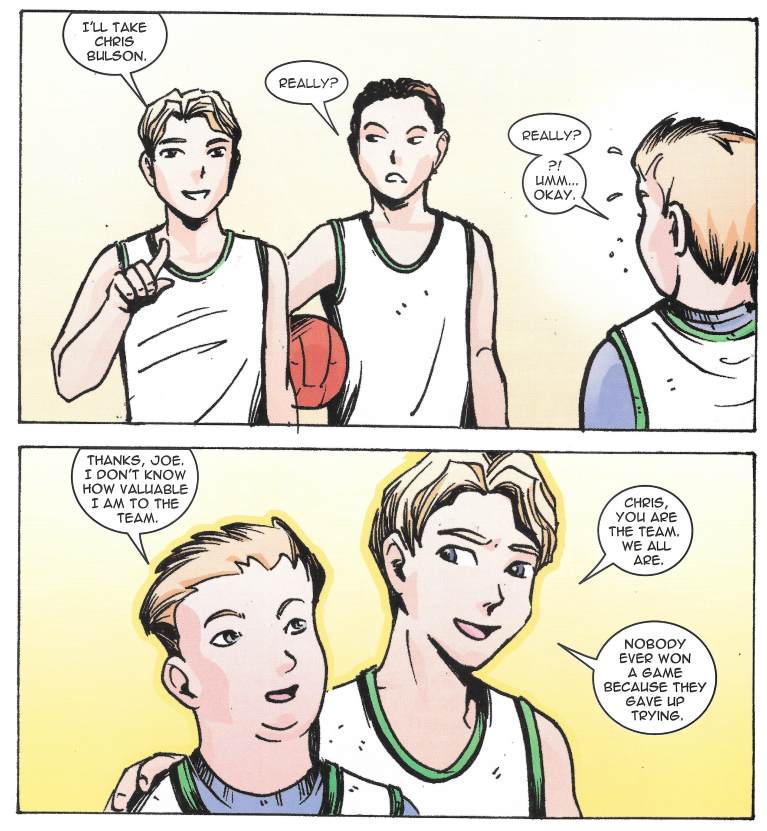 I mean, it works on the level of perfect kid’s story but it also is so wholesome that part of me expects something dark and twisted going on UNDER all these good intentions. Nobody is that nice.

At the local “Kafe” (which looks like a 50’s diner to me) we round out our cast with Chet Morton, who quickly leaves for a cybercafé down the street to check on an ebay bid. 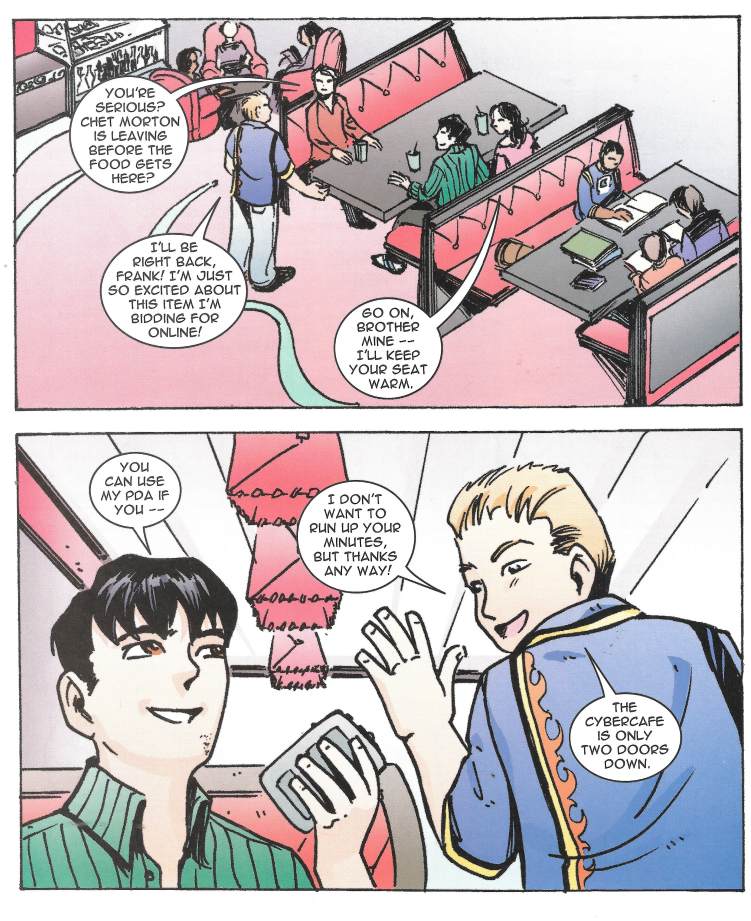 Also in attendance are Iola, Frank’s girlfriend and the blonde Joe adores: Callie. Talk turns to romance and Callie getting an acceptance letter from a college far away and relationships…All this is shoved aside though as they leave the diner only to find a commotion at the cybercafé Chet went to and never returned from.

The brothers rush in to find Chet being literally chased around the place by men in black. 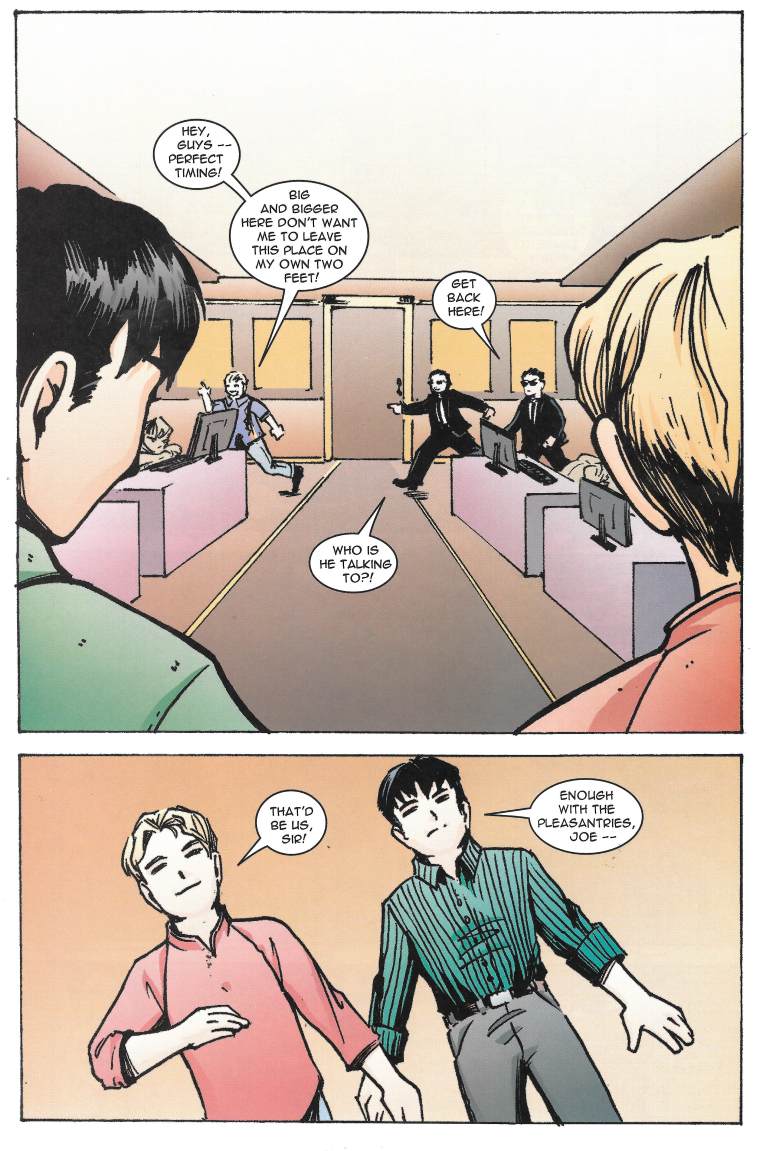 They beat up the guys and hustle out the back…only to get cornered. 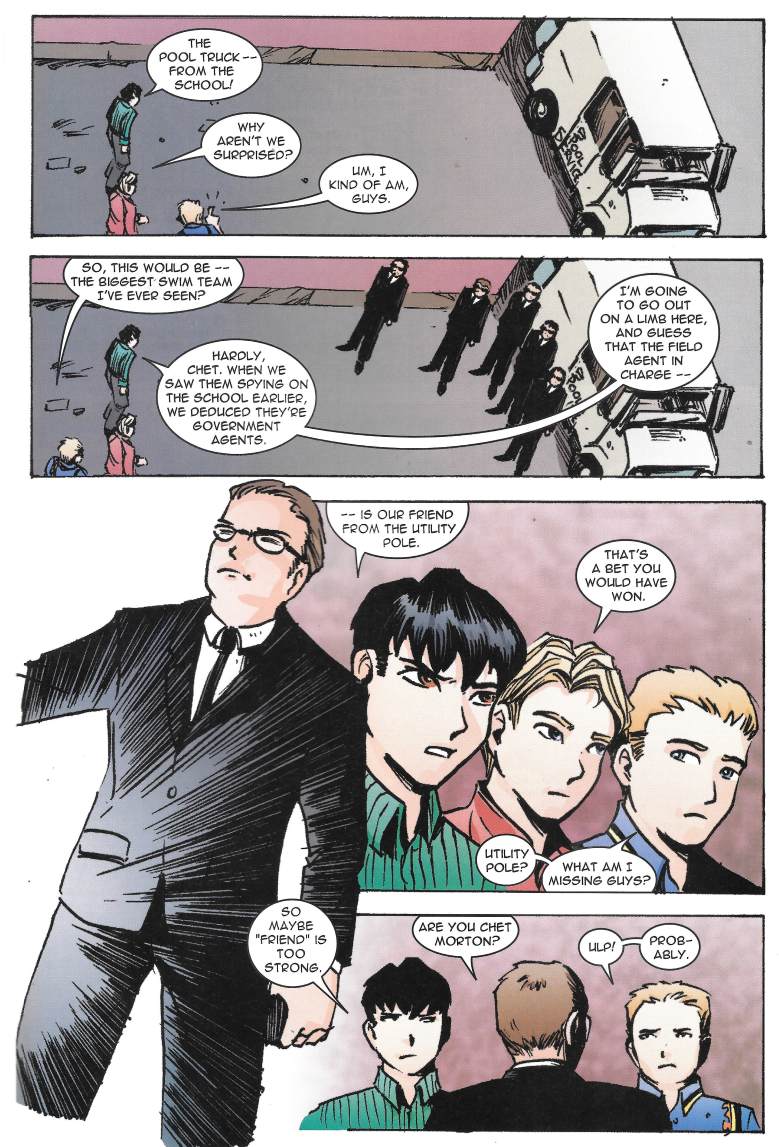 …by the same people staking out the school. The boys learn they are Department of International Security and something Chet was doing online relates to Chet having stolen the “Ocean of Osyria” (emphasis theirs). 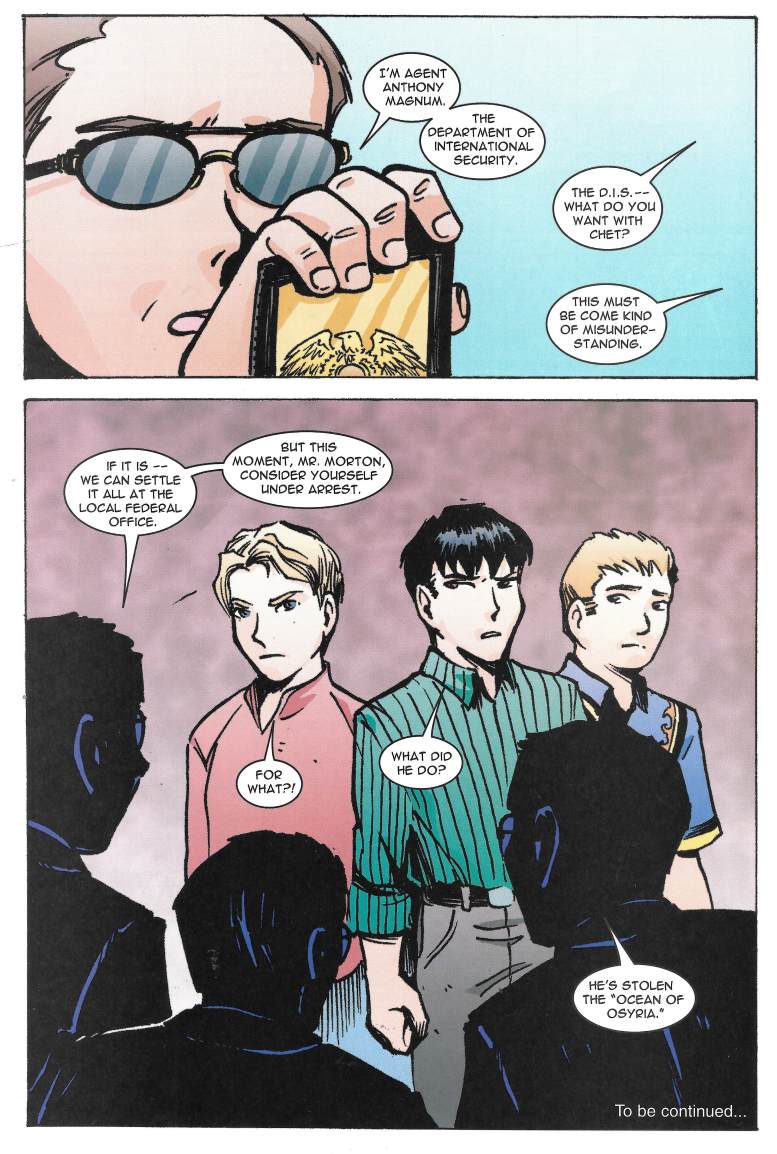 In all, I want to like the Hardy Boys book but I have some misgivings. The art is truly terrible in many panels and on a subsequent read through is very distracting. Secondly the book provides such an idealized version of teenagers that it grates just a bit on second glance.

However, first time through it is a popcorn muncher. It provides characters you have to love (because they are perfect in every regard) fighting bad guys and solving mysteries and helping their friends. As far as straight-forward adventure tales go, it works on every surface level and I have to admit to a great deal of joy reconnecting with these heroes of my youth.

What I’m saying here is that while your mileage may vary, there is a lot here to like, if you let yourself.
Posted by SonOfCthulhu at 4:12 AM