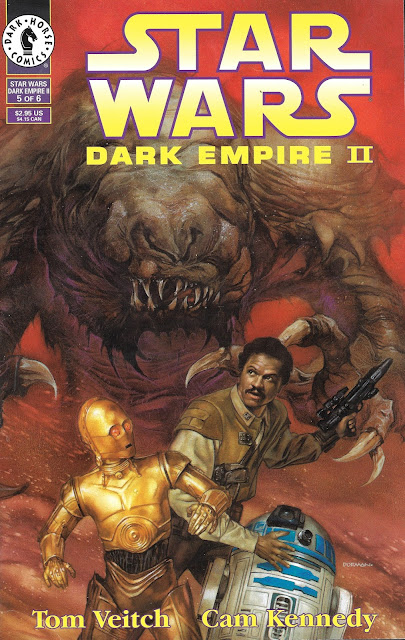 The most festive issue of Star Wars ever!
Just look at all that red and green!

Dark Empire was one of the first original story Star Wars books produced after Dark Horse Comics obtained the license for the properties. 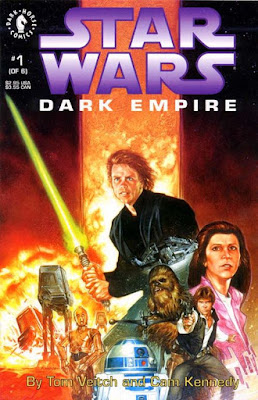 The original story is set in the same “Extended Universe” as Timonthy Zahn’s “Grand Admiral Thrawn” trilogy of books, which make for a pretty great starting place to take Star Wars fort the end of Return of the Jedi.

Dark Empire starts six years after RotJ, with the Alliance now facing a rejuvenated Empire lead by a clone of the Emperor. The Hutts have a bounty on all our cast for killing Jabba, Boba Fett comes back to chase after them, and Han and Leia are having a child. A boy they will eventually name Anakin Skywalker, like his grandfather.

Luke goes to confront the clone of the Emperor mano-a-mano and to learn why his father turned to the Dark Side. Unable to resist the allure of evil, Luke is turned as well. In the end it is Leia that brings him back and the Emperor’s new doomsday weapon is destroyed along with his fleet and apparently him.

Except the book sold too well.

And the author/artist duo weren’t done quite yet.

They went on to produce Dark Empire II, something akin to the further adventures of our Star Wars gang dealing with the threats posed by Boba Fett and the now young-again Emperor.

I know Veitch and Kennedy from “The Light and Darkness War” and I would have thought that their style of storytelling and art wasn’t quite for everyone. However, I would have been dead wrong. Much of my qualms comes from Kennedy’s style being linked so closely with his 2000 AD/Judge Dredd work that it is hard to separate. Everything from his boarder layouts to his character designs scream British satirical sci-fi to me and it is hard to ignore that voice. It doesn’t help that his drawing “voice” is so unique that it is unmistakable.

As for Tom Veitch, well he’s the brother of Rick Veitch, and I tend to believe crazy runs in family trees. Also talent, as Tom is an author in his own right, having penned books of prose, poetry and biographies. But the out-there stuff in TLaDW made me skeptical that Dark Empire would be a good fit.

Turns out I was dead wrong on that count. And by extension, also wrong that Dark Empire II would be successful. I will state that this appears to be a darker, gritter Star Wars than I am used to, and I’m unsure if it is Kennedy’s pencils or if it is the story concepts bounced around. The first series had millions of deaths and Luke walking around dressed in black while being a Vader level prick.

And this series has…well, that would be a spoiler of the review, so I guess it’s time to dive in.

We start the issue with a title crawl, which is dynamite. Veitch and Kennedy prove they are fans of the work by including something so simple that it evokes for the audience that shared experience of waiting in the dark for the action to start.

I’m not going to give you the crawl, as it sums things up so much that my commentary on what’s going on would be worthless. What I am going to do is jump right into the action. Lando’s beetle shaped Viper Automadon War Droids are assaulting the Emperor’s stronghold and manufacturing facility. If they can shut it down, the Emperor will be delivered a devastating setback. Along for the ride are Threepio and Artoo. 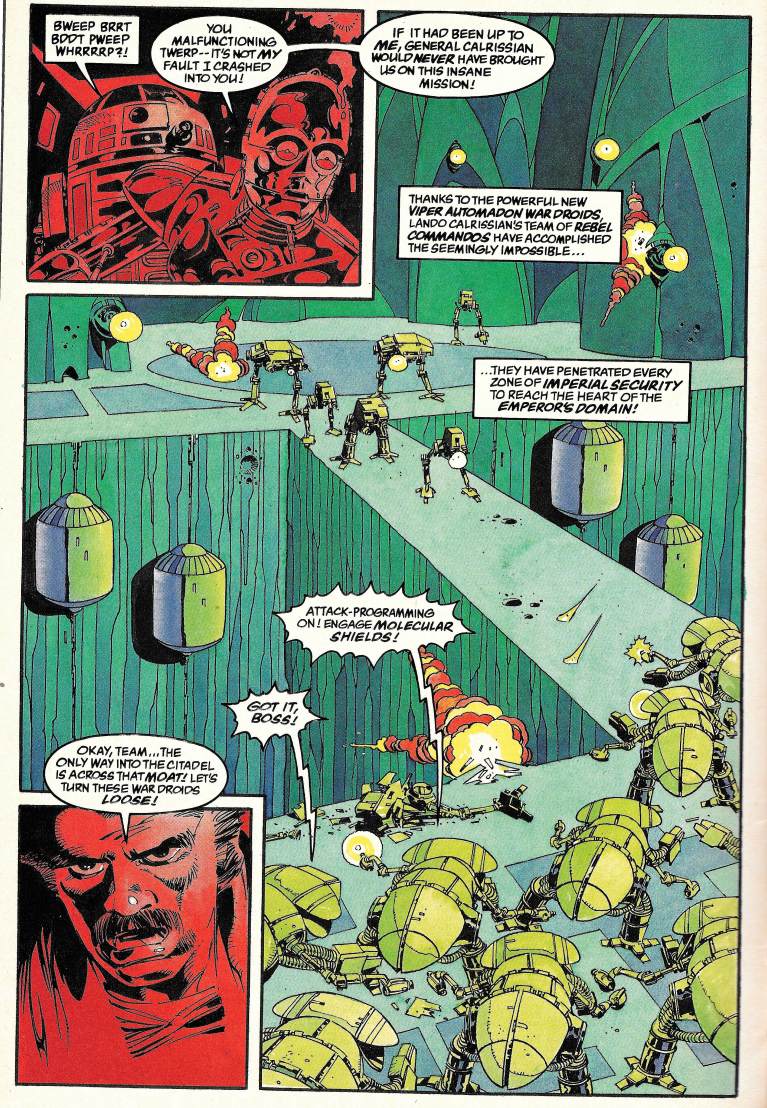 Note the “odd” color choices here. If anything messes with me about Kennedy it is his use of color pallets. I get the inset panels in red, that color symbolizes danger and warnings and could even be interpreted as the flash of the console lights on the driver of the War Droid. I’m thinking that Kennedy is leaning on the former, using color to convey emotion and not just be something literal. But I don’t understand the overuse of green in the rest of this battle. It’s like the War Droids are attacking the Emerald City from Oz. Nor do I get the yellow-ish cast to all the battle participants.

And all of this is the frustrating part of Kennedy’s art, I love his pencils but I spend way to much time trying to understand his color choices. Any other artist would have blammed this out in silver and white on the droids and browns with gray steel on the battlements. But not Kennedy.

So I will go around and around about why those particular colors are chosen in every single panel. I want to desperately understand the underlying message he is conveying with them. I truly hope there is one and he isn’t just throwing darts on a color wheel from Sherwin Williams.

Okay, enough dickering over this one page. I keep up like this and we’ll still be here three months from now. Well, I will at least. You will have moved on to more interesting blogs.

The war droids keep taking fire that doesn’t do any damage to them while toasting all the AT-AT’s in known creation. In the end the Emperor starts in about why his men haven’t deployed “the chrysalides containing his dark-side creatures. His men explains they have, but it takes time to deploy them. 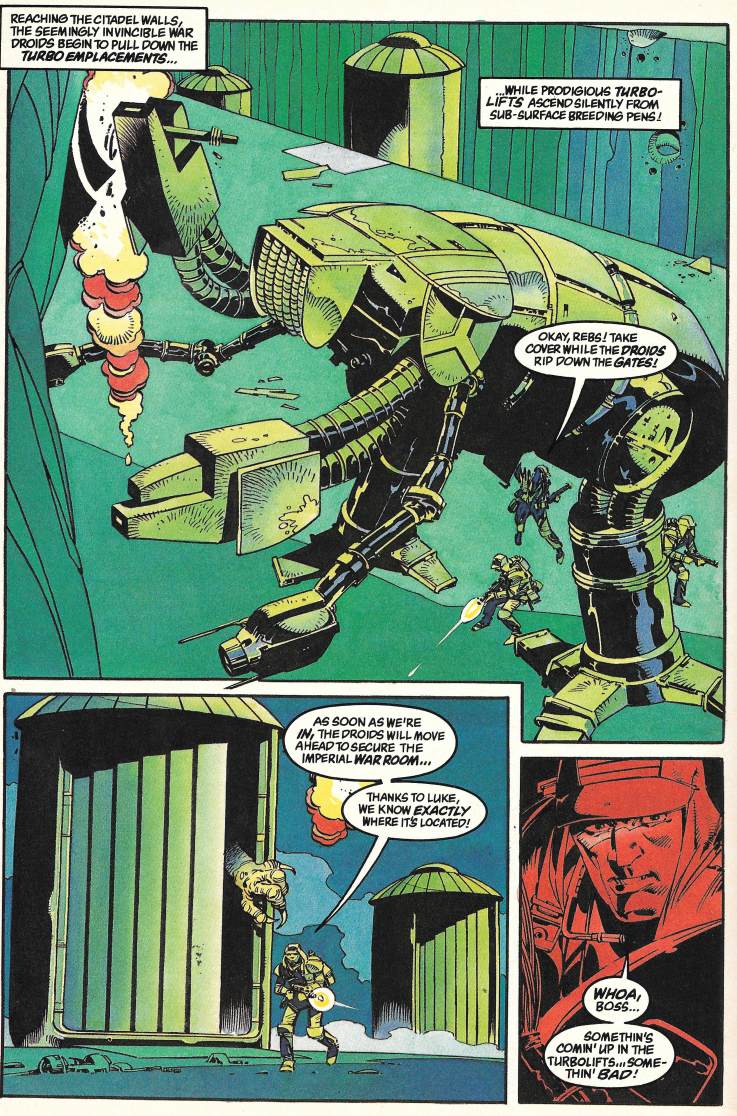 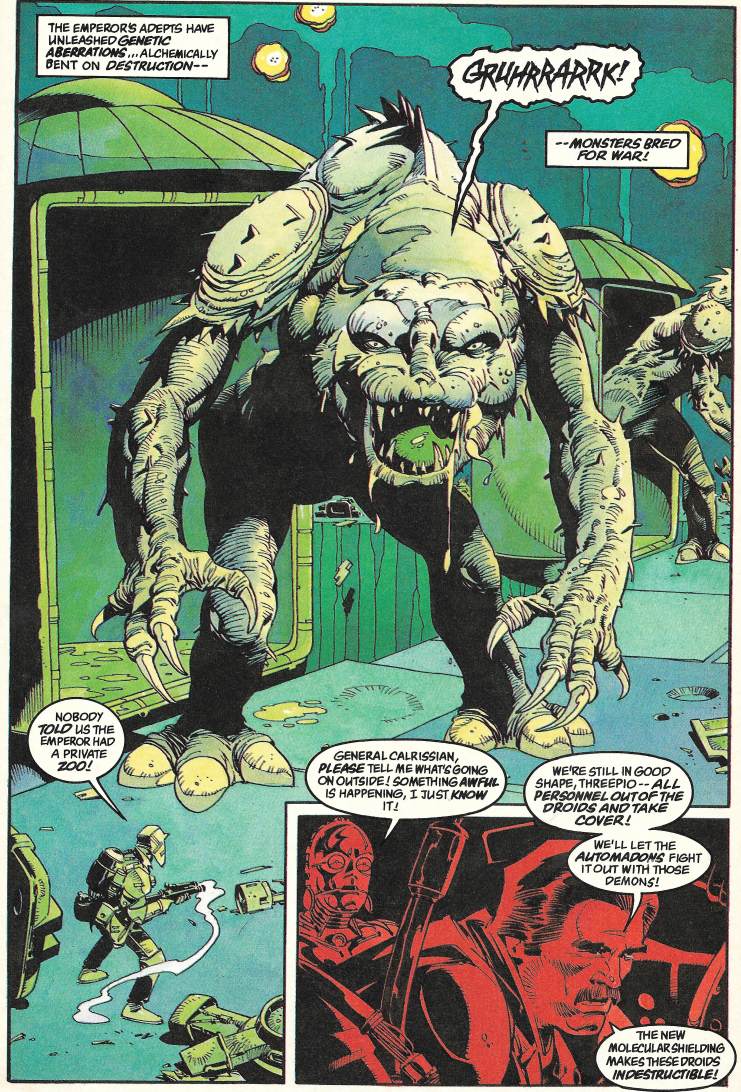 … this ugly-looking mutant rancor thing that, let’s be completely honest, would look much more menacing in most other color schemes. Yes, I said I wouldn’t say any more, but this festive green and red coloring goes on for quite a few pages and while it may fit the holiday season, it feels really, really wrong.

No matter how it is colored, Kennedy’s panels are still spellbinding. Just look at these beasties tearing through the war droids… 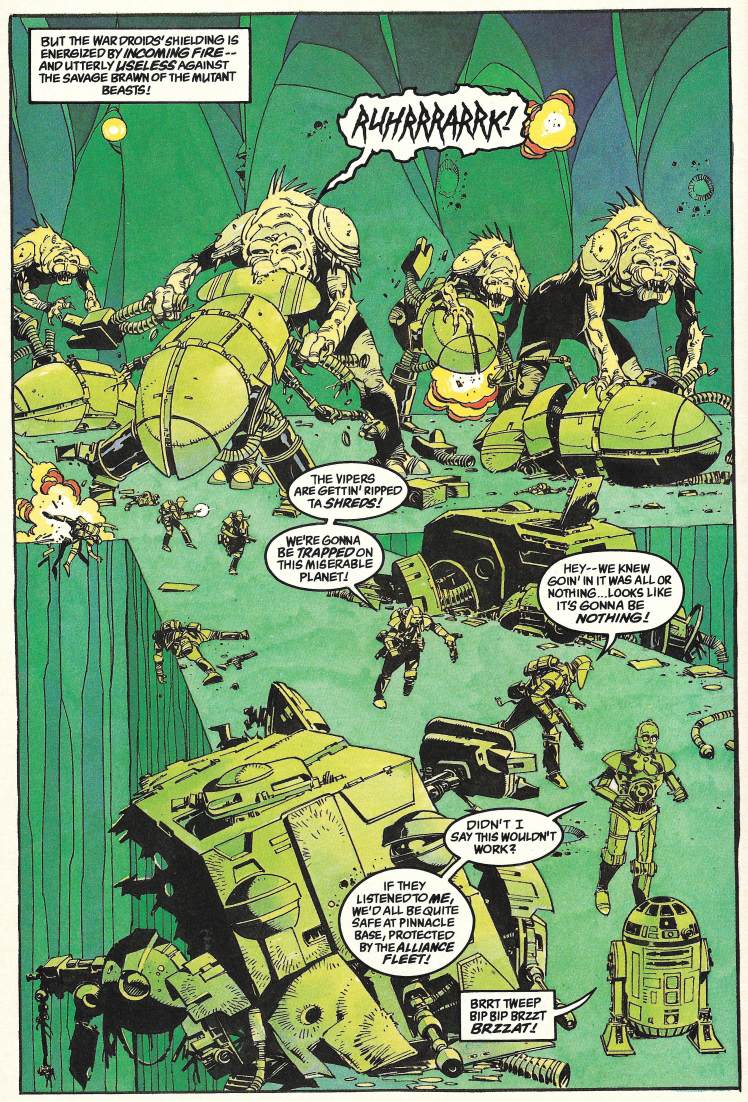 As this is happening, word gets out to the smugglers the Empire has been using and a few of them decide to aid the Alliance (at a cost of their jobs and possibly their lives). 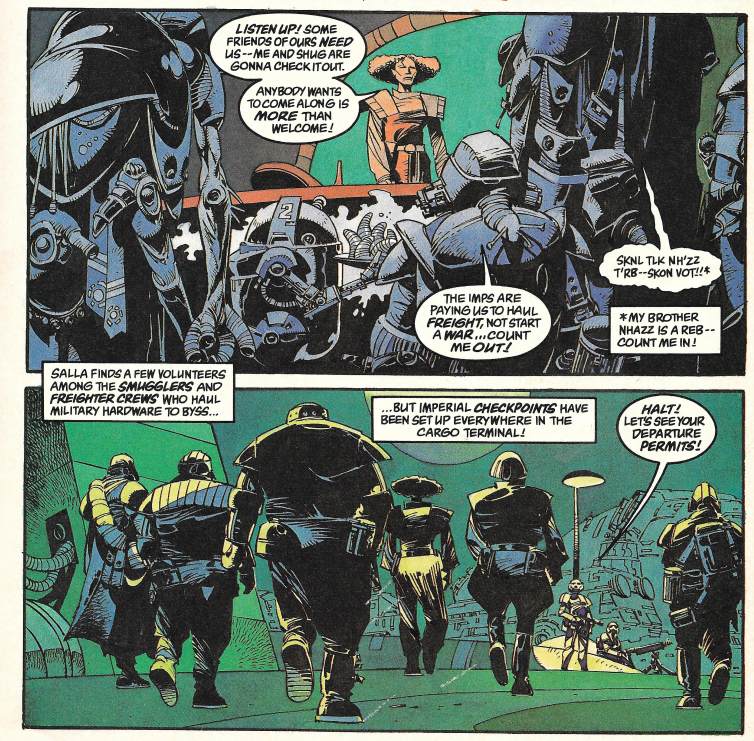 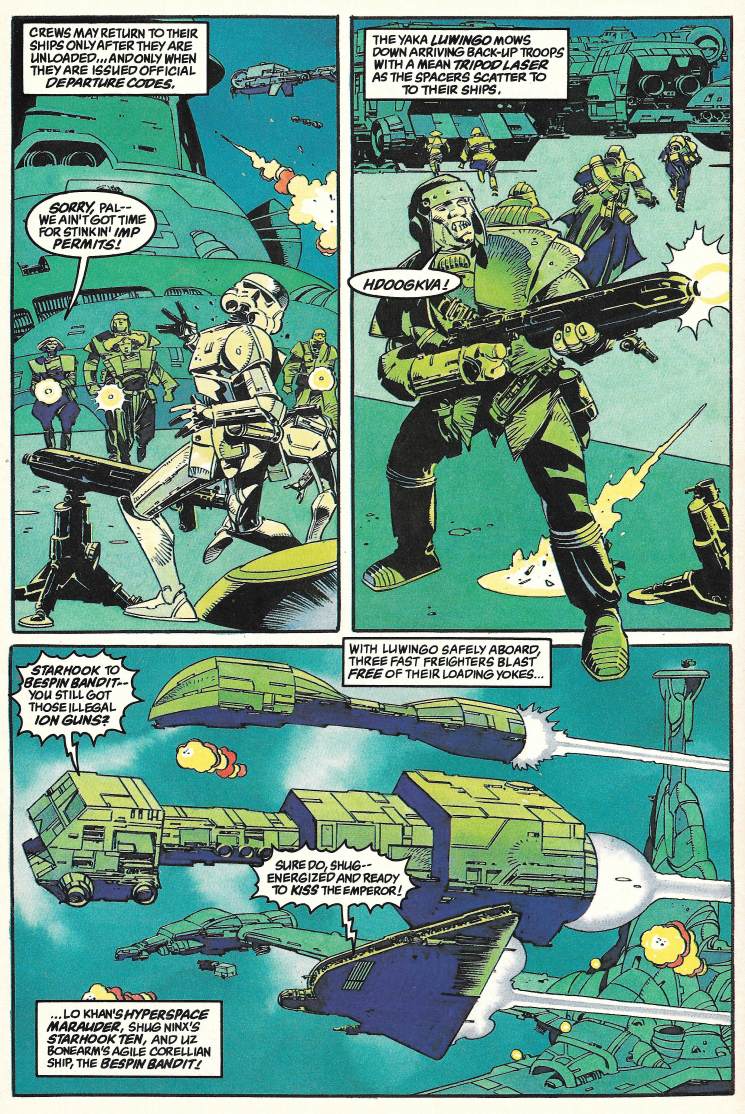 Which is a good thing because our heroes are about to be meals for the dark side creatures. 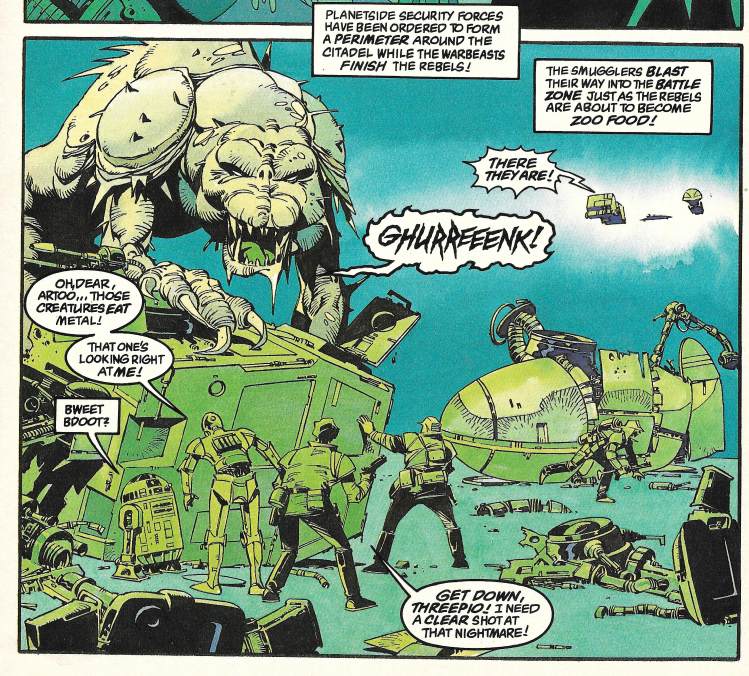 The ships make fast work of the war beasts but one tries to hitch a ride on Threepio and Artoo’s ship. 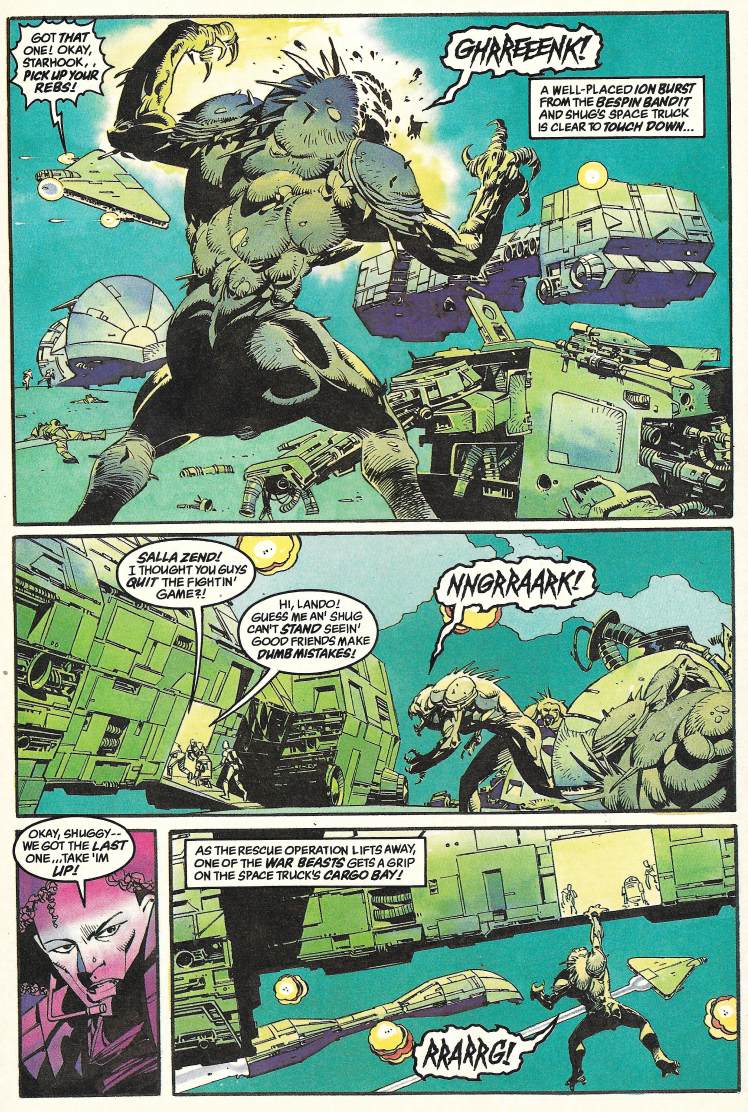 The plucky little astromech droid rolls over and zaps the claw of the beast causing it to King Kong itself right into a turbo laser. 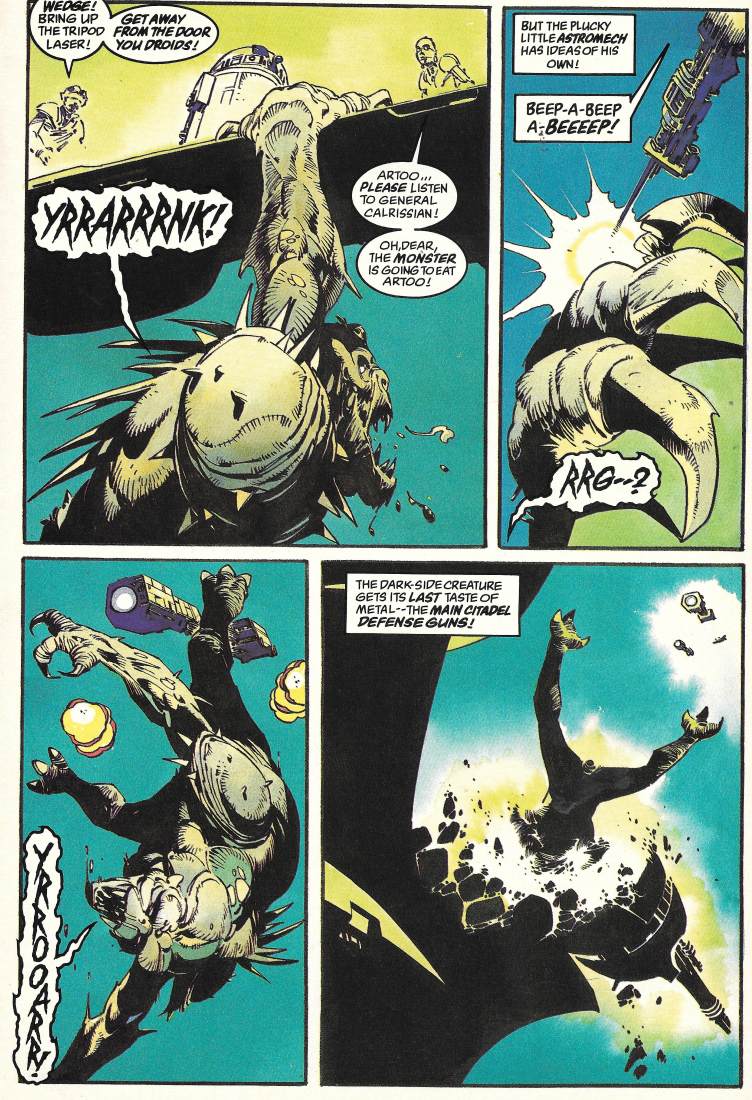 With that the Empire breaks off firing at the departing freighters because they are too close to the new superweapon, something called the “Galaxy Weapon.” 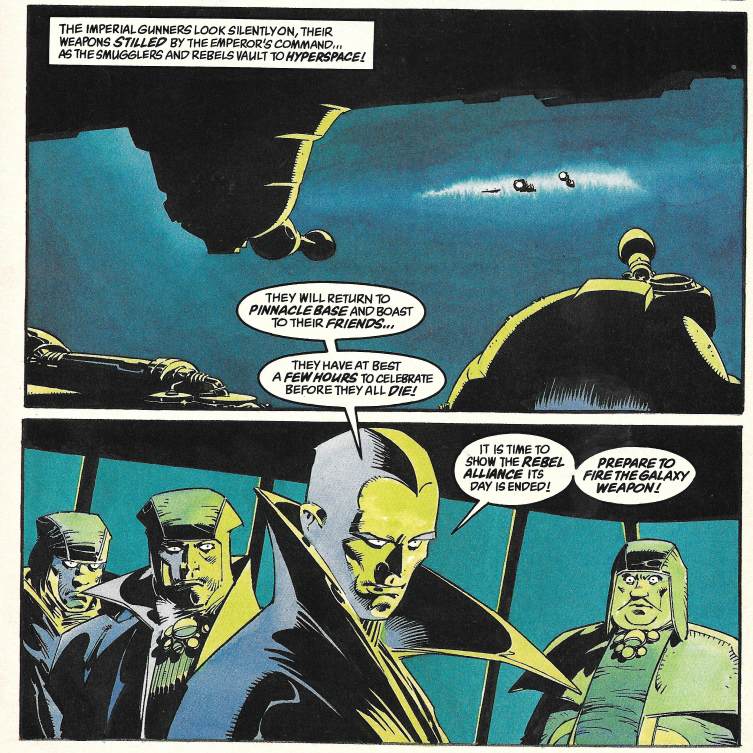 If there is one thing that I’m sick of in Star Wars, it’s giant weapons that blow up suns, planets, and galaxies. After the first two death stars, the Empire should have just quit with the giant military projects. If you follow Expanded Universe canon, they did it again in the first Dark Empire book with things called World Devastators and in Kevin J. Anderson’s Darksaber where they built a space station that acted as (and I kid you not) a giant space lightsaber. My point is, they aren’t really any good at it and they could build so many more plain-old Star Destroyers instead.

But no. “Galaxy Weapon.”

Which they decide to use now on the Alliance’s Pinnacle Base. PREPARE TO FIRE!

And I have to ask, do you think that the Emperor here is yellow because he’s cowardly? Maybe that’s a subtle hint?

If that’s so, then these characters are all green with envy because these “hidden jedi” that Leia found last issue are assisting Han, Leia, and Chewie in repairing the Falcon by adding this odd looking, bi-lobed gun placement on the front of it. The guy that looks like B.O.B. from The Black Hole is King Empatojayos Brand, a super powerful Jedi in some kind of life-saving support suit. 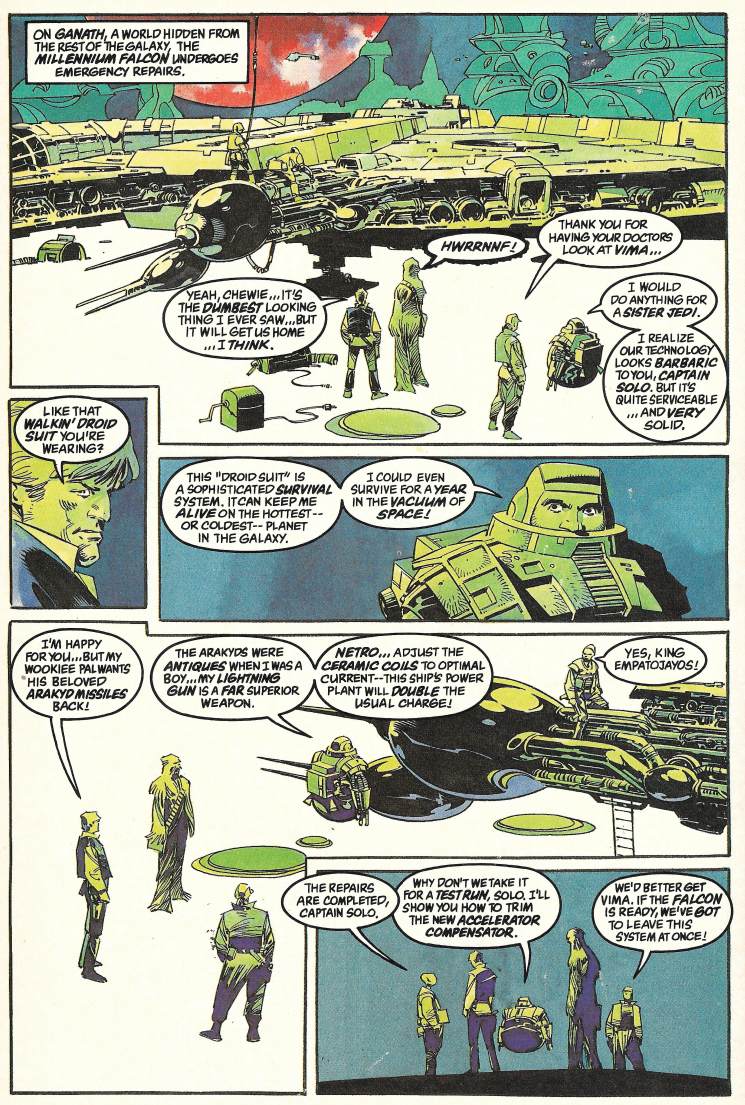 Leia goes to pick up the other Jedi and… 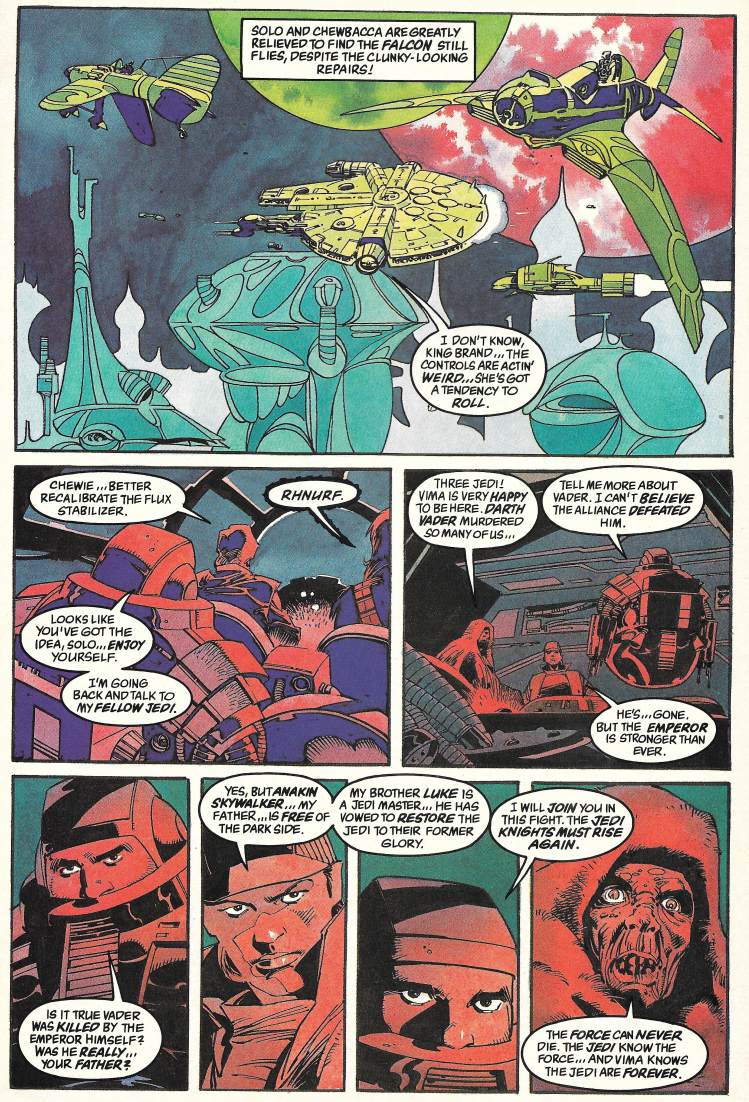 …they are off, flying out of the weird gas cloud the Jedi have been hiding in. As Han flies them out, the Jedi confer with Leia over recent history.

And the Jedi followers of Empatojayos watch as he departs. 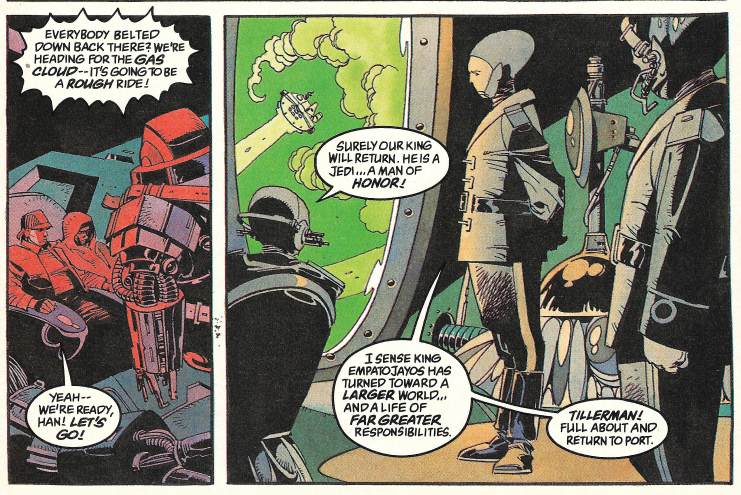 But a wounded foe waits for Solo on the other side of the gas cloud. (which shouldn’t be green. Because nothing says “giant space fart” like a green glowing cloud.”) 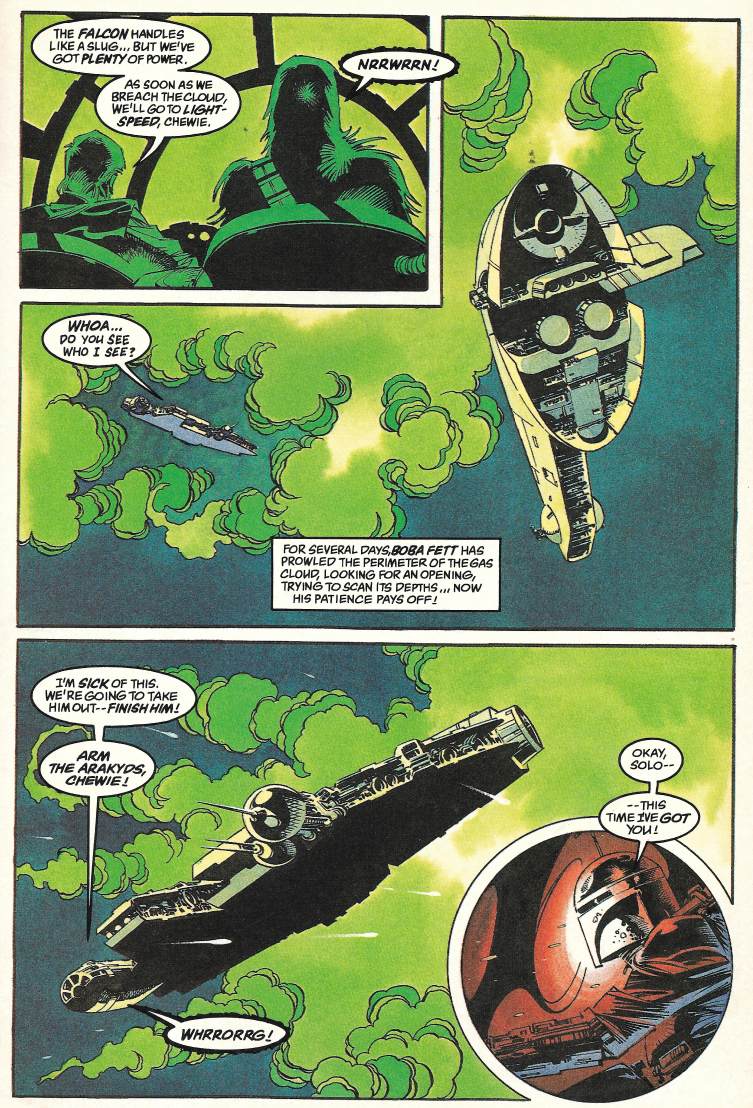 The antique weaponry installed on the Falcon really performs however and takes out Boba Fett’s ship in one shot. Off Slave I spirals into the space fart. Poor Fett. He gets the worst death locations ever. Han says he thinks they will never see him again. I think it’s hard to keep a good villain down. Just look at the Emperor. Then Han announces they are headed for New Alderaan and “the children” which I believe are their son and daughter. 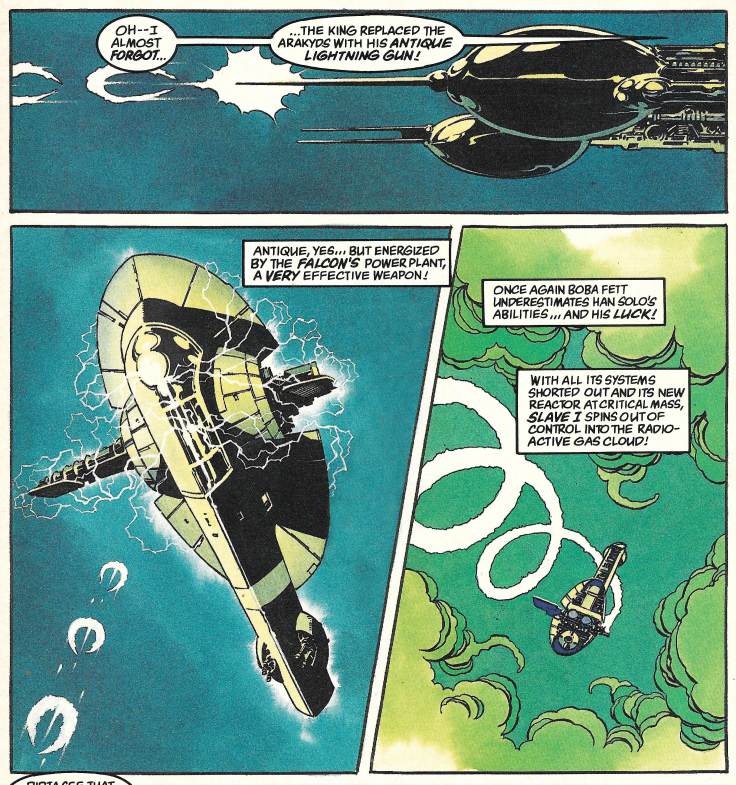 We turn to these people in hyperspace with Luke. They are Jedi apprentices honing their powers as they go, with the good old probe thing which all spaceships seem to have for some reason. 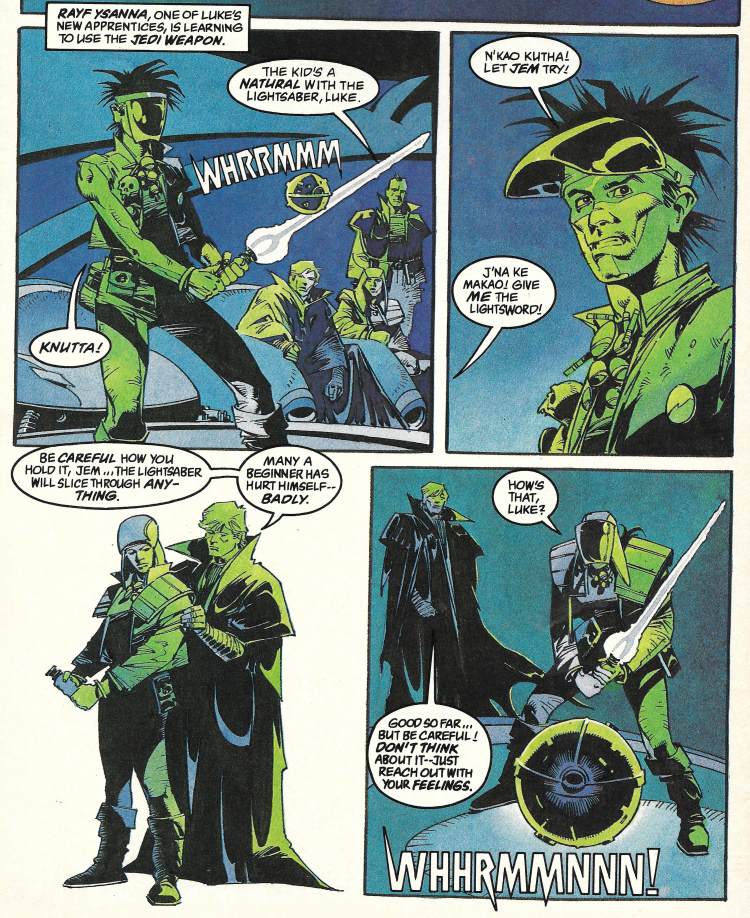 The other students talk about how Luke has the settings on the probe tuned too high for this particular student to hit it. They say this one panel before THIS… 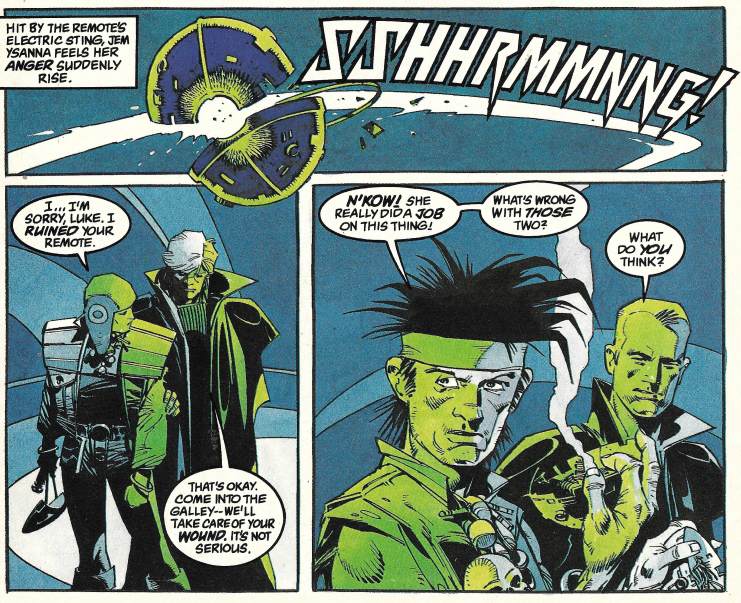 Luke appears to be showing this one student lots of personal attention, which is okay since at the time all that prequel BS about Jedi’s can get busy and Love leading to Fear and Hate mumbo-jumbo was still ink in George Lucas’s pen. I get the Jedi are sort of like space monks, but the first part of that should imply that their futuristic status means they are modern enough not to live like a hermit on some planet by themselves.

…or Luke has currently been doing.

Crap! I’m disproving my own argument. Perhaps those will be shown in time to be the WRONG choices and that cutting yourself off from your human emotions leads to a path just as dangerous as the dark side. Only time and these last two movies will tell. I’m hoping Abrams has more than explosions up his sleeves.

Meanwhile, Han and Leia pick up their kids from Space Daycare (having to pay a hefty late fee) and off they go. 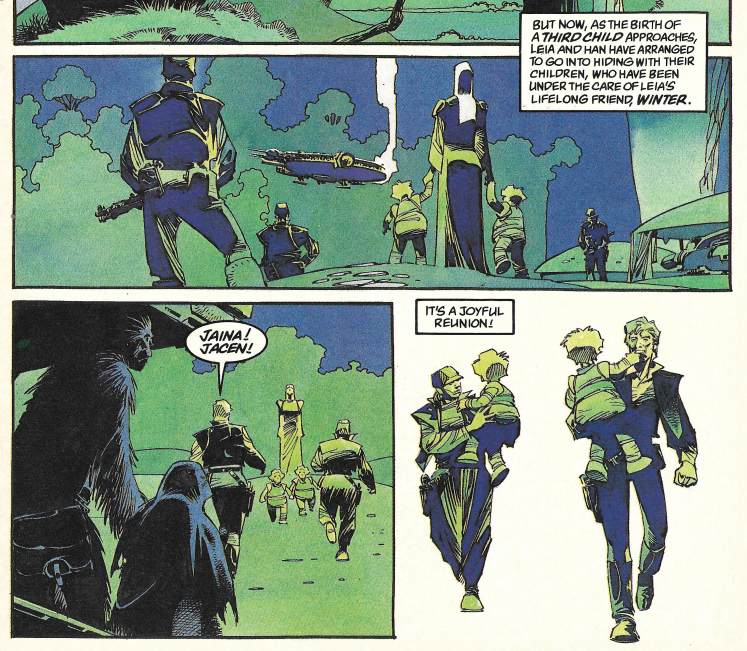 Then we turn to two characters I don’t know, who are heading to the Alliance’s headquarters on the fifth moon of Gla Goocha, when suddenly! 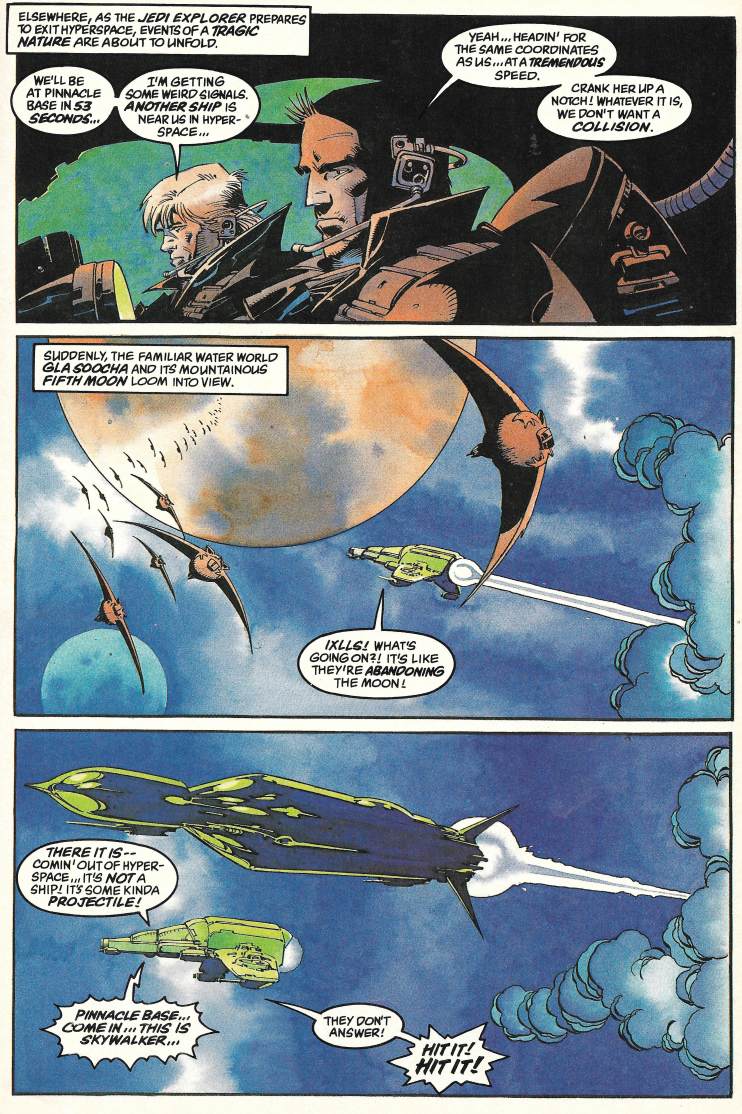 A missile streaks toward the planet… 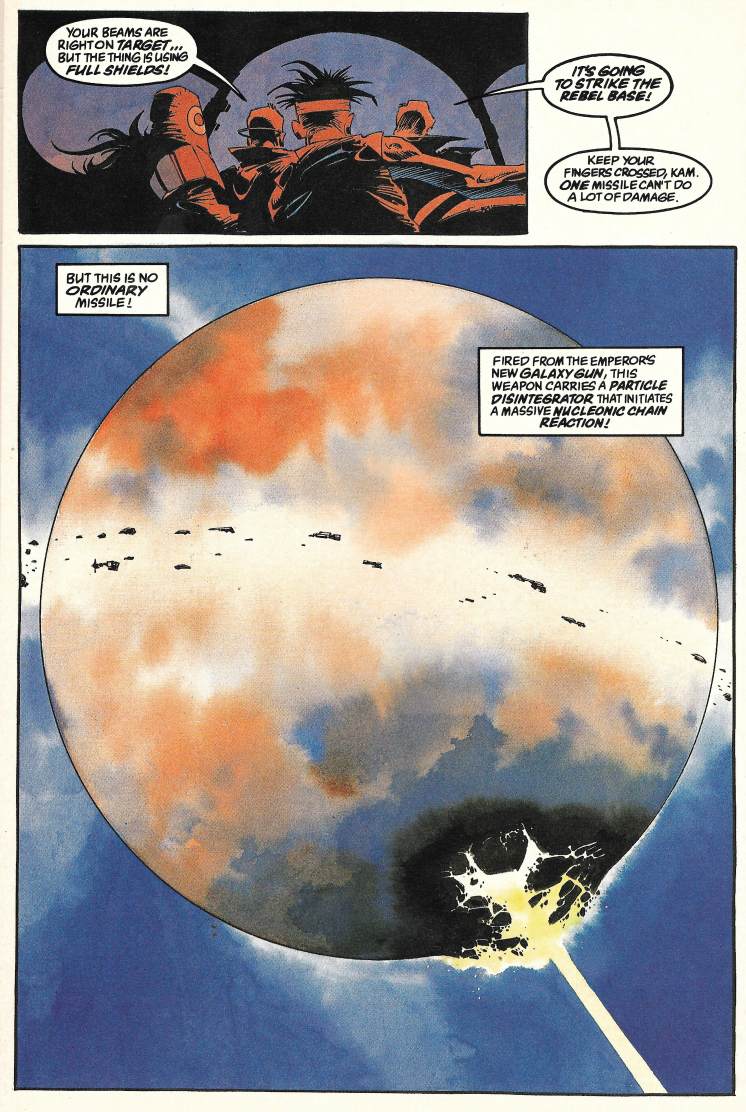 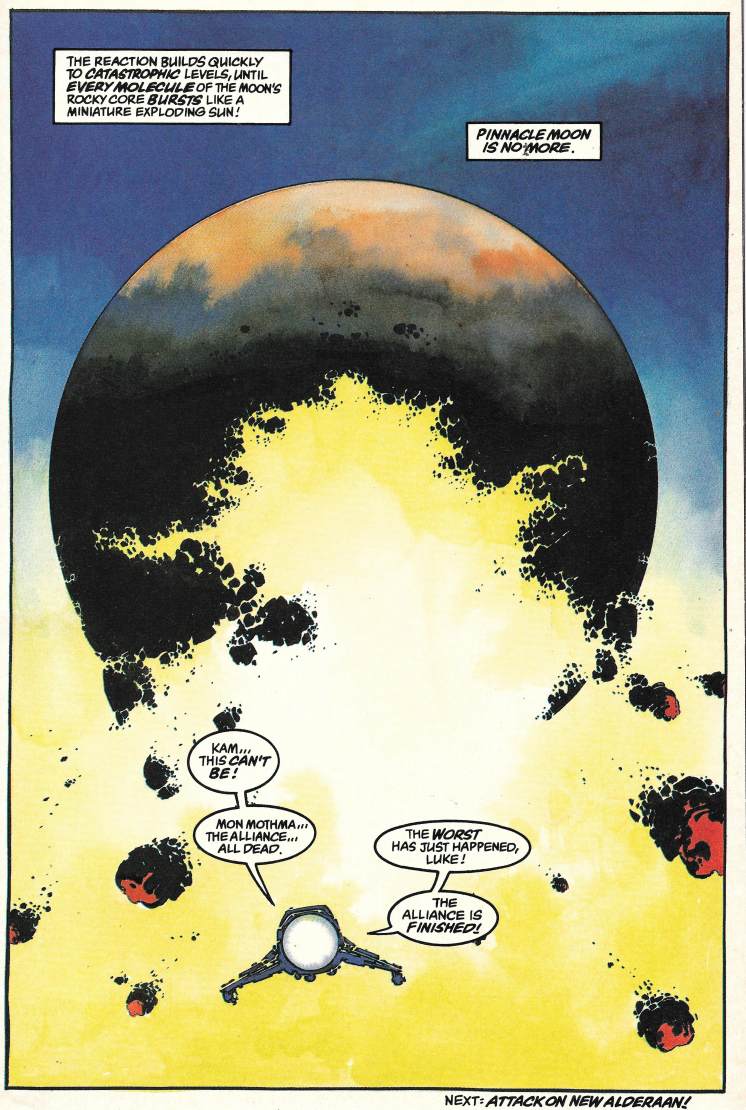 …utterly obliterating it! In the words of the great Jedi Master Kenau: “WHOA!”

Thus ends the penultimate issue of Tom Veitch’s trilogy, the last he would pair with Cam Kennedy. Next up would be Empire’s End, illustrated by Jim Balkie

I miss the times when this was canonical, even as I knew back then that the instant they started making sequels that carried the story forward in the Lucas-verse, that these books would be the losers. Having lived through the Star Wars comics Marvel put out after A New Hope that were in no way considered “real” when Empire came out, I get it. But these were some neat stories even if a few of the concepts came off as stale.
Posted by SonOfCthulhu at 3:01 AM