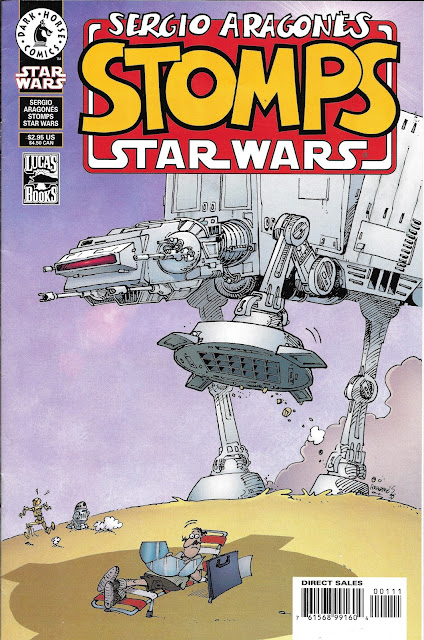 A delight from the days of Mad magazine.

Mad magazine made up a substantial part of my childhood.

I can remember buying it every time the magazine sported a Star Wars cover. Any time they parodied the latest sci-fi movie, I was there. The magazine was amazing, but more amazing were these surprising little one panel funnies hidden in the margins around the page edges.

Those little wordless one panel drawings were known as “marginals” and they were the work of one man. That man is Sergio Aragones. 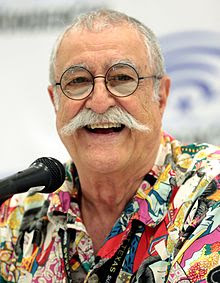 Aragones arrived in the United States in 1962 with $20 to his name and a portfolio of drawings. He was resoundingly told to seek employment with Mad magazine, and he did so reluctantly. Aragones didn’t think have any satire in his portfolio or any articles and was afraid of being rejected.

Knowing his English-speaking skills were minimal he sought out the only other artist at Mad who spoke Spanish to introduce him to the editors. This turned out to be Antonio Prohias, creator of the comic strip “Spy vs. Spy”. Unfortunately this didn’t work out quite as expected as Prohias’ English was poor too.

He introduced him as “Sergio, my brother from Mexico” leading the editors to assume he was actually Sergio Prohias and Antonio’s brother.


However, Mad liked what the saw and gave Aragones a job telling him to “Make Mad his home.” Upon Mad reaching issue 500, they discovered Aragones had contributed stories, pictures, articles and marginals to 524 issues, second only to Al Jaffee (at 451 issues). Aragones says “I took it literally.”

As for those “margainals,” Aragones pitch the idea to take them over shortly after getting there. Before his arrival, Associate Editor Jerry DeFuccio said “Writing the ‘Marginal Thinking’ marginals had always been a pain in the butt. Sergio mad the pain go away.” The staff didn’t think he could keep up a stead stream of the small cartoons, but  Aragones has provided marginals for ever issue of Mad since 1963 (longer than I’ve been ALIVE) except one, and that one would have had them too, but they were lost by the post office.

Aragones is fast with his pen and his wit. He is widely regarded as “the world’s fastest cartoonist” and Mad editor Al Feldstein said “He could have drawn the whole magazine if we’d let him.”

So having this little puppy kick us off toward the lead-in to Star Wars: The Last Jedi is a must-do. Mark Evanier, who works with Aragones on Groo the Wanderer is helping steer this beast too. And it never hurts to have someone of his award-winning skills along to assist. Buckle in everyone, it’s going to be a Mad ride… 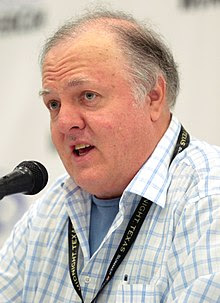 Our story setup is that Mark Evanier and Sergio Aragones are visiting the office of George Lucas, director of Star Wars. Mark is our level-headed straight man and Sergio…is, well Sergio. 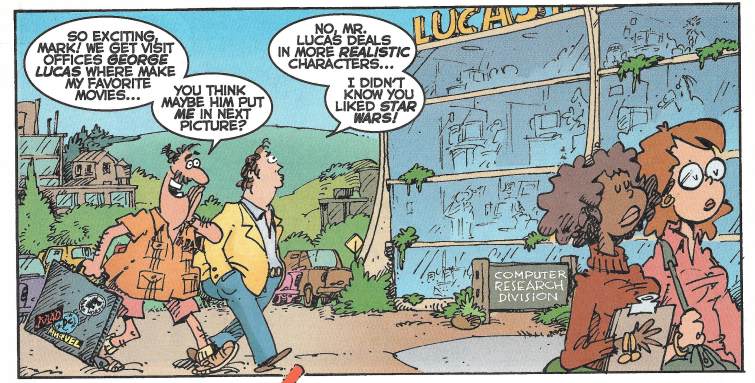 Additionally, we have this crazy guy… 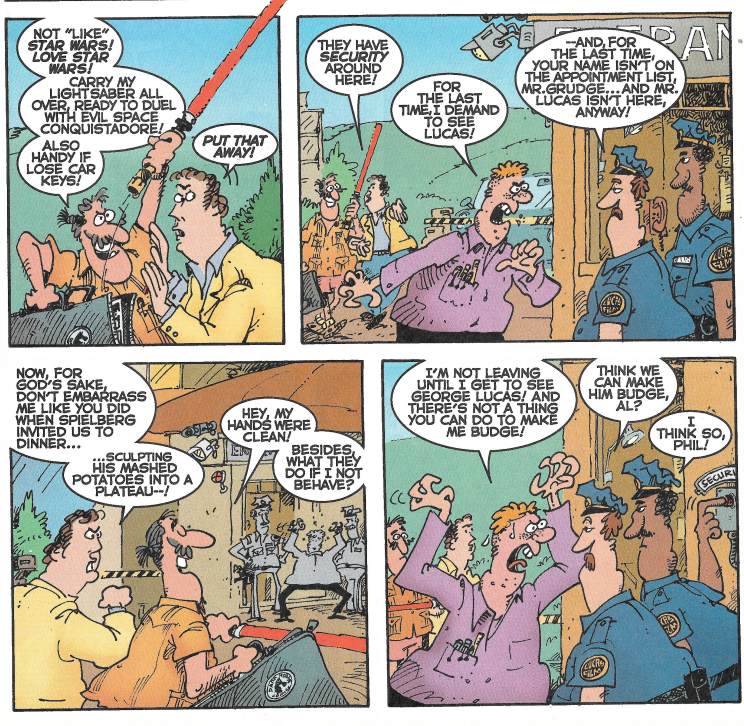 I mean the Other crazy guy, the one that isn’t Sergio. He is about to get kicked out of line and will then hatch a diabolical plot to ruin Lucas studio. This was before they released the prequels obviously. Note that Aragones’ looks great even in full color and full sized. Man, I miss my dose of Mad craziness. 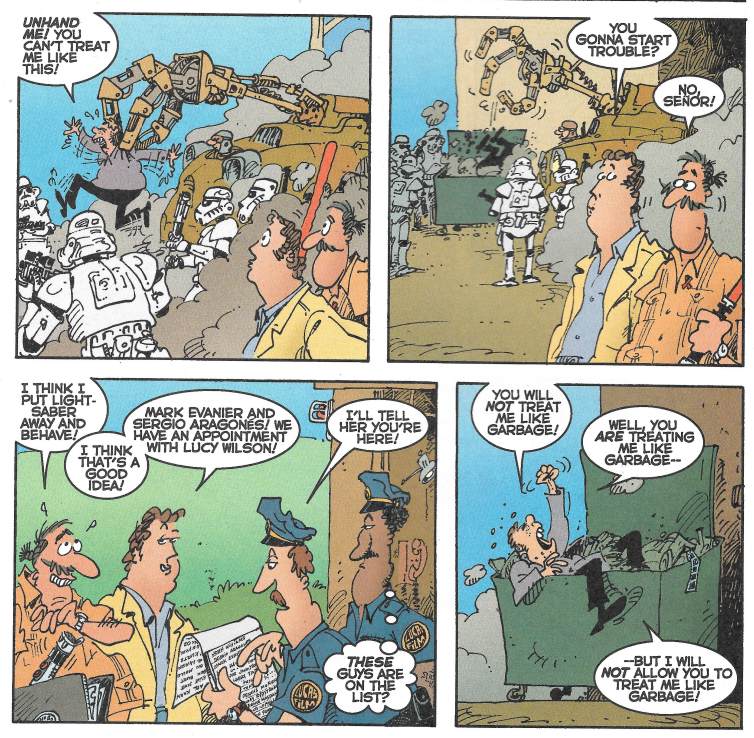 We go through a page of Mark and Sergio being introduced to people I assume are real Lucasarts employees and then the accident happens. Our mad fanboy is wiring up a bomb at the same time Sergio is inspecting a special camera lens and ZZPEGH! Sergio is out of the real world… 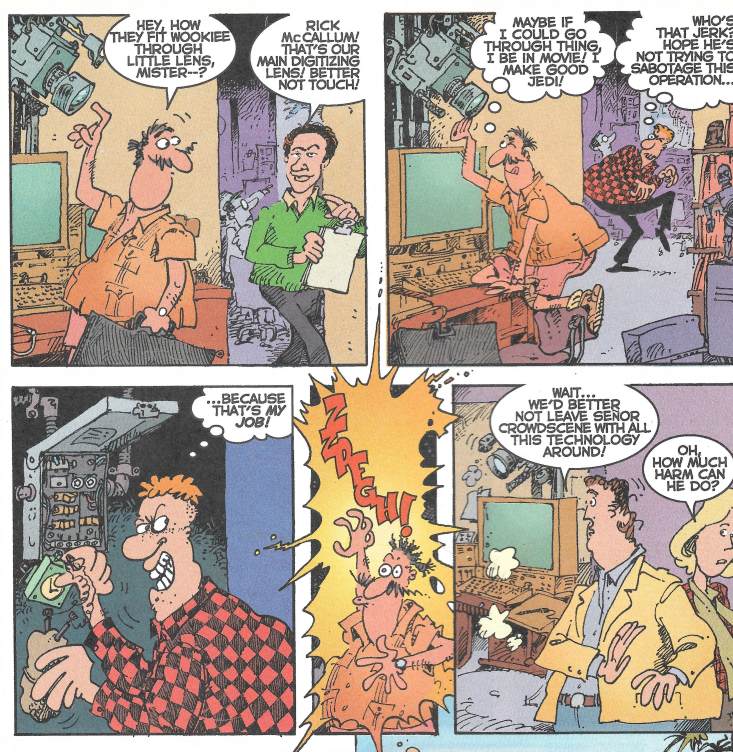 …and into the digital copy of Star Wars that Mark and the others will be watching on screen. 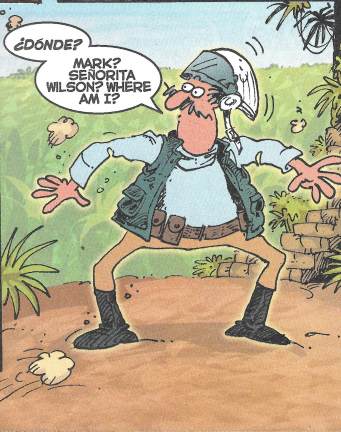 And while we the audience get it right away… 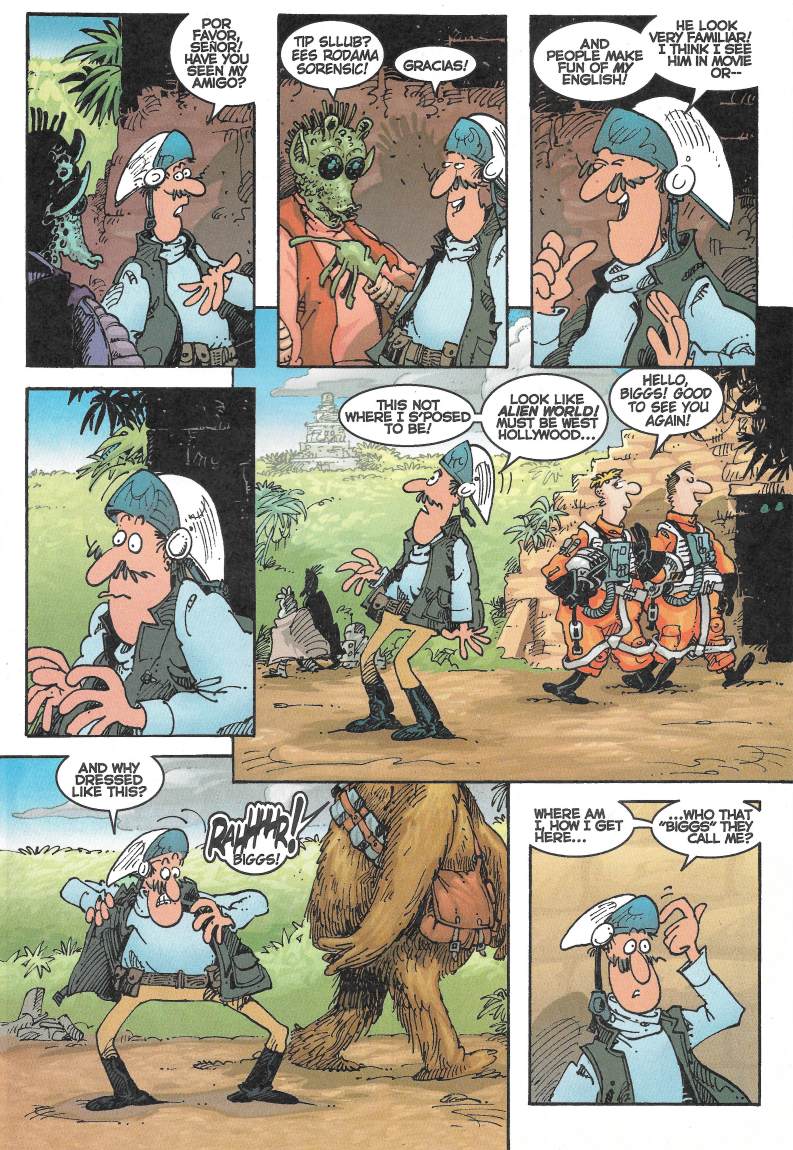 ….it takes Sergio a few minutes. I admit that these bits worked for me. Everything that Aragones put his comic book self through, I could see his personality shining through it. I really thought this would be more like a series of unconnected panels about Star Wars much like his Mad work. But it is better than that. Evanier and Aragones created a good story that, for a complete fantasy, really feels like the real Aragones and Evanier got channeled into.

And just look at this splash panel where Aragones meets Luke. 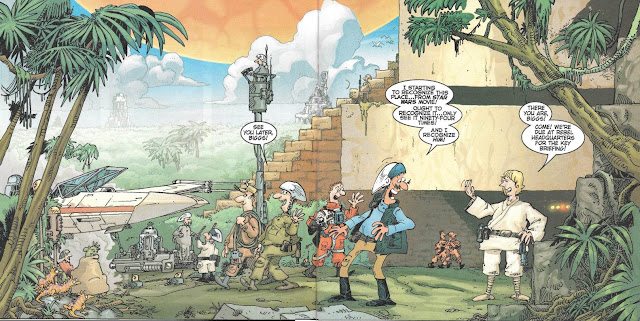 That some great stuff right there. 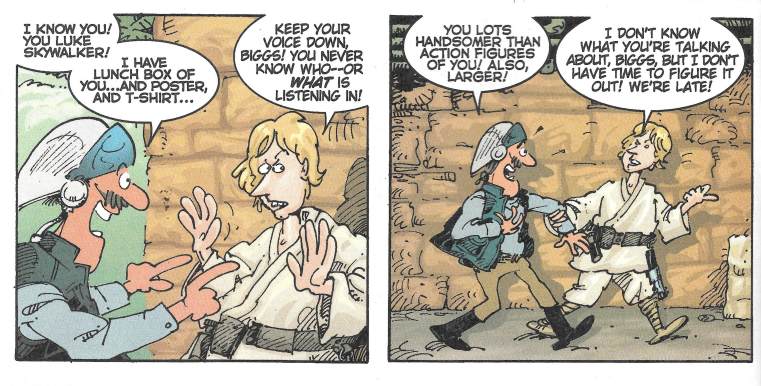 …Meanwhile, Evanier has noticed Sergio’s absence while the saboteur lays out more bombs.

As I was saying about Aragones looking like Biggs, he’s quickly rushed into a pilot’s uniform for the assault on the death star. Aragones tries to bolt, but again runs afoul of his own fan dedication. 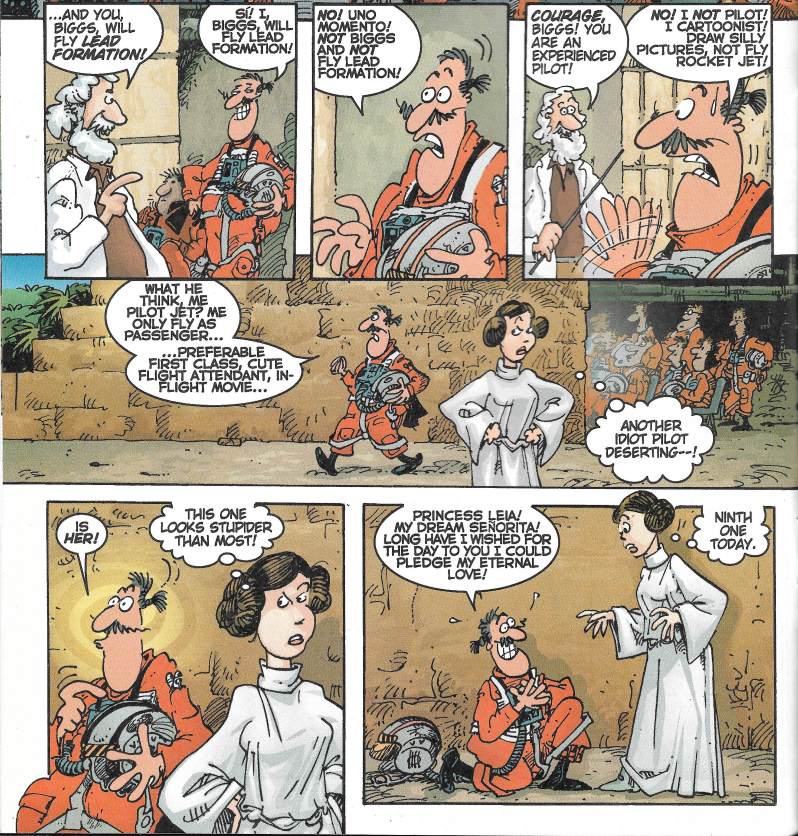 And Leia, in real life and on-screen, was always one tough cookie. 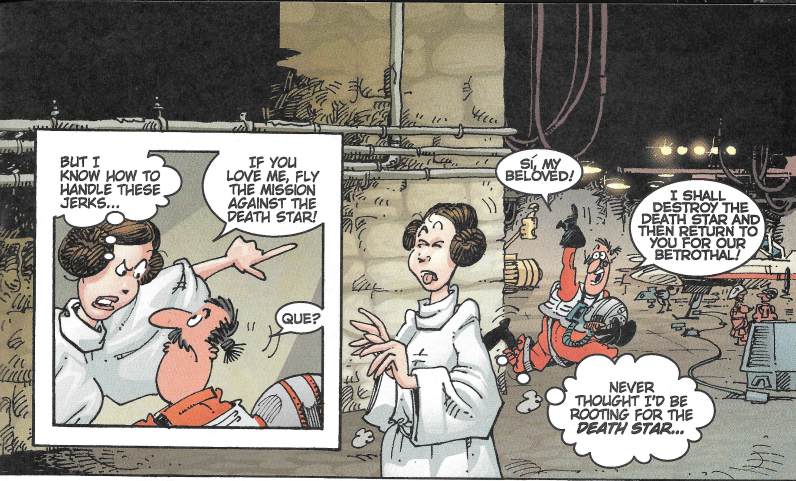 So off “Biggs” goes, his inclusion in the action being noticed by Evanier in the real world. Unfortunately for Aragones Biggs doesn’t survive the Death Star run. And speaking of running… 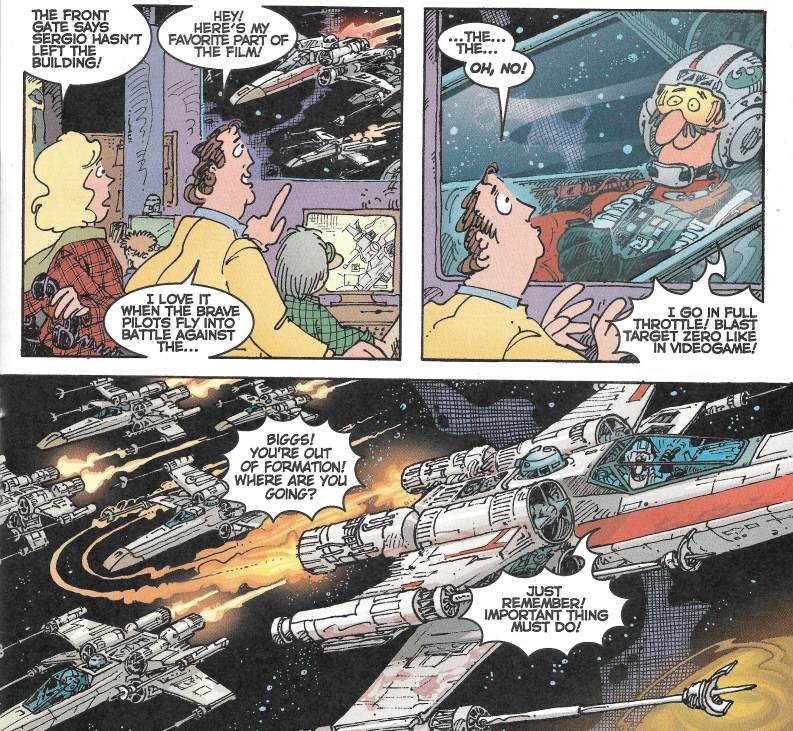 …Aragones is so hungry that he runs right over to the nearest Star Wars McDonalds before joining the fight. And it appears he’s 100% committed to doing the job. 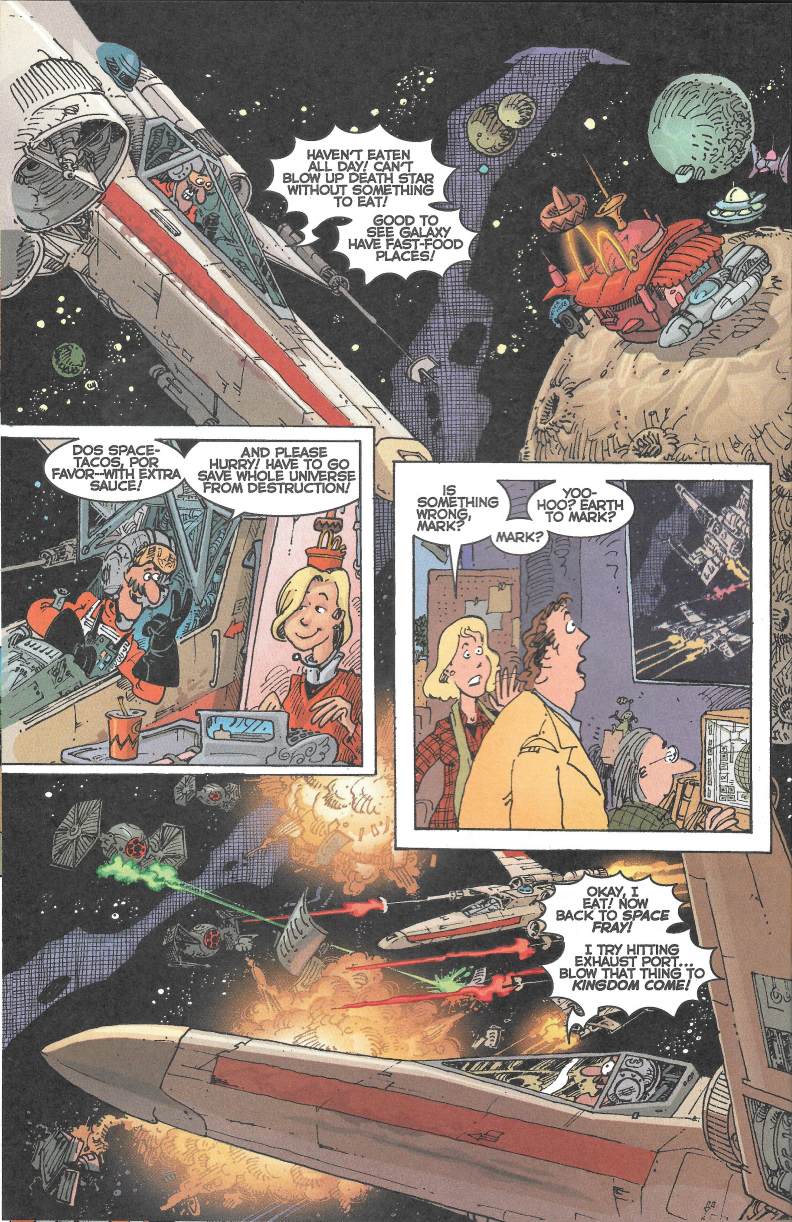 Or maybe we should make that “We are 100% sure he should be committed.” Either way it doesn’t change Biggs' outcome. He gets his ride blown out from under him. But since this is a comic book… 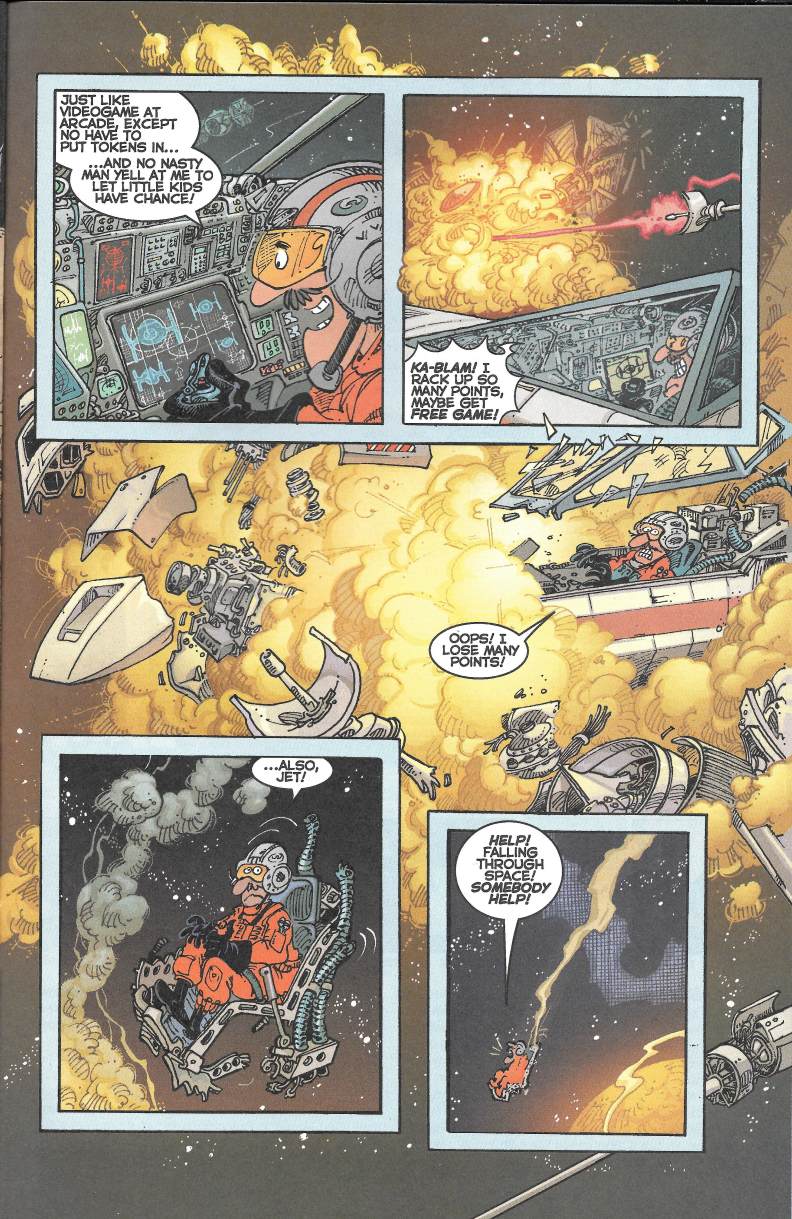 …Evanier has them advance the film to the point that Aragones flops down into a very familiar swamp. 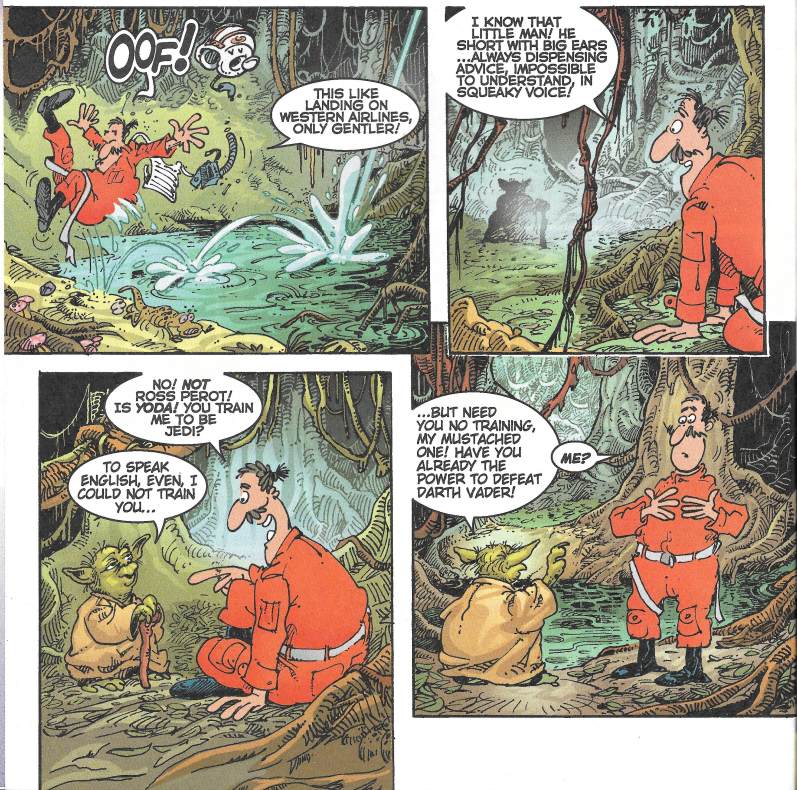 I love Yoda’s first line here. I love the Sergio pokes fun at himself in all this, as does Evanier. It’s funny and endearing.

While Mark tries to figure out how to undo the process, Yoda thinks to himself “’Usual gang of idiots,’ indeed!” with a disgusted grunt. He leads Sergio to a point where he can get picked up… 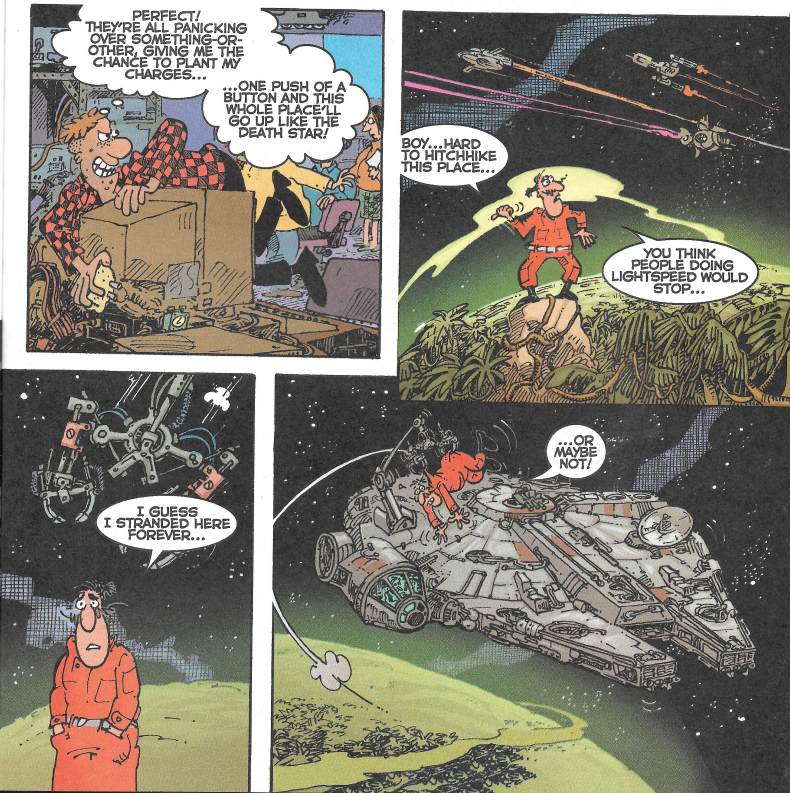 …by the fastest hunk of junk in the galaxy… 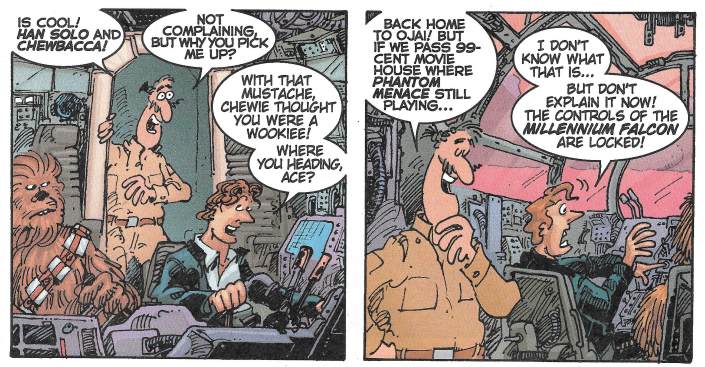 …piloted by Han and Chewie. At least for a brief moment.

And then it is taken over by a tractor beam, forcing everyone to abandon ship in parachutes…

…right into the center of the cloud city of Bespin. Which is unfortunate for Han and Chewie as that’s right where Darth Vader wants them to be. 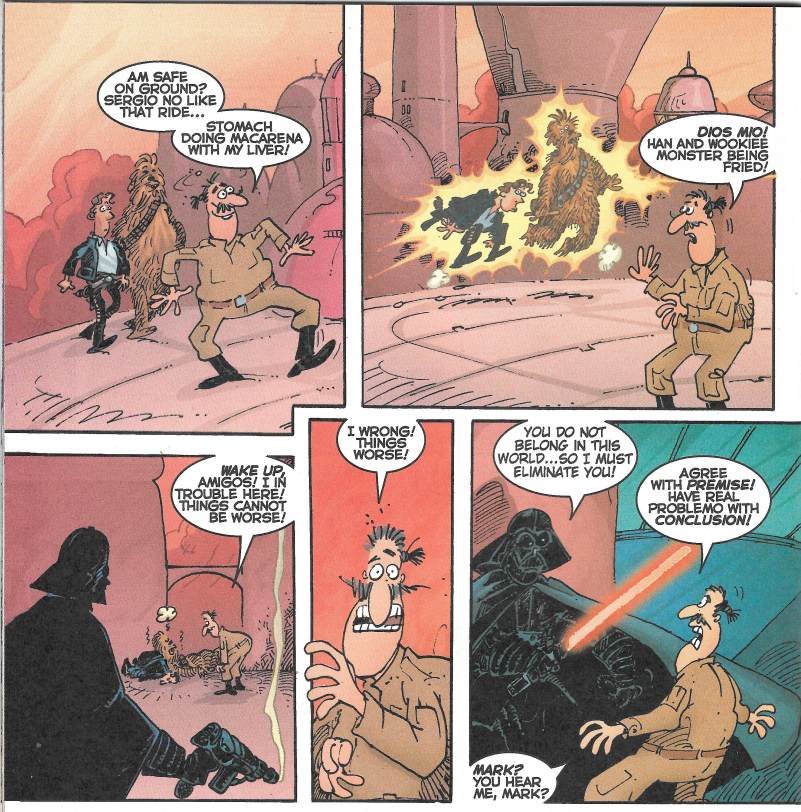 Meanwhile security is on to the mysterious intruder dressed like George Lucas and they start a manhunt.

On the screen, Sergio gets a visit from “Obi-Juan” who councils him to use “the farce” leading to Sergio whipping out a giant pencil and drawing on the walls of the Cloud City. 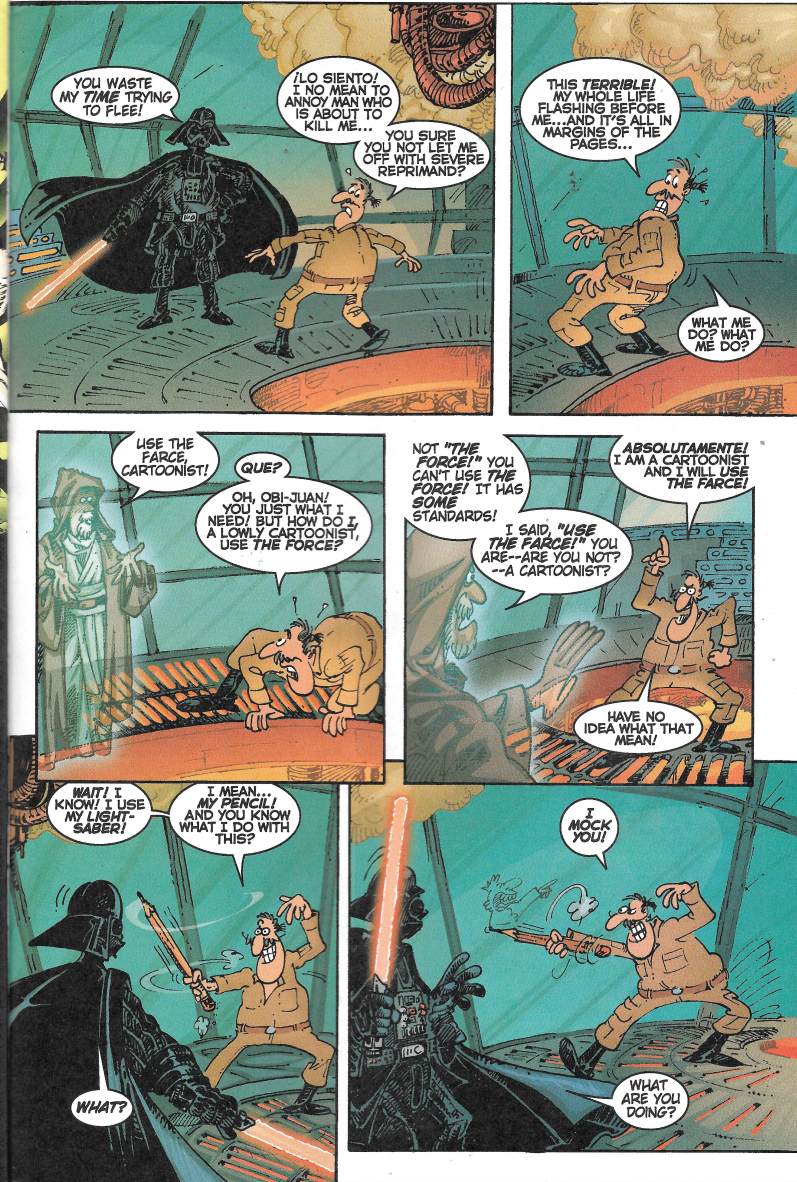 Love the second panel so, so much! 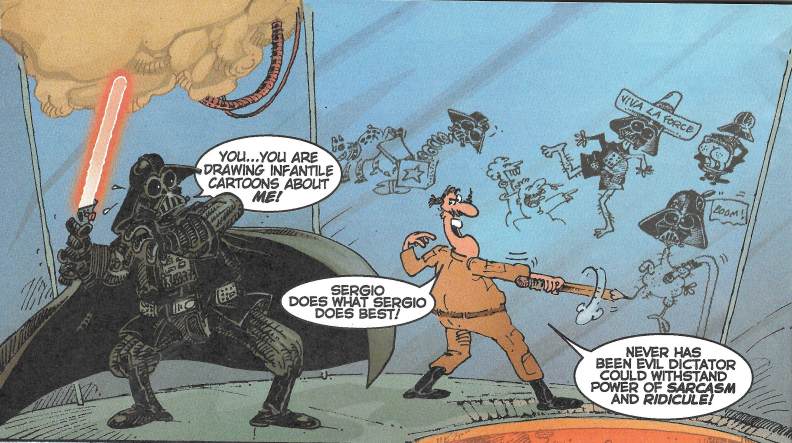 While Sergio has Darth on the run, in the real world George Lucas is showing off his latest digital print of the film to investors at precisely the
wrong time. 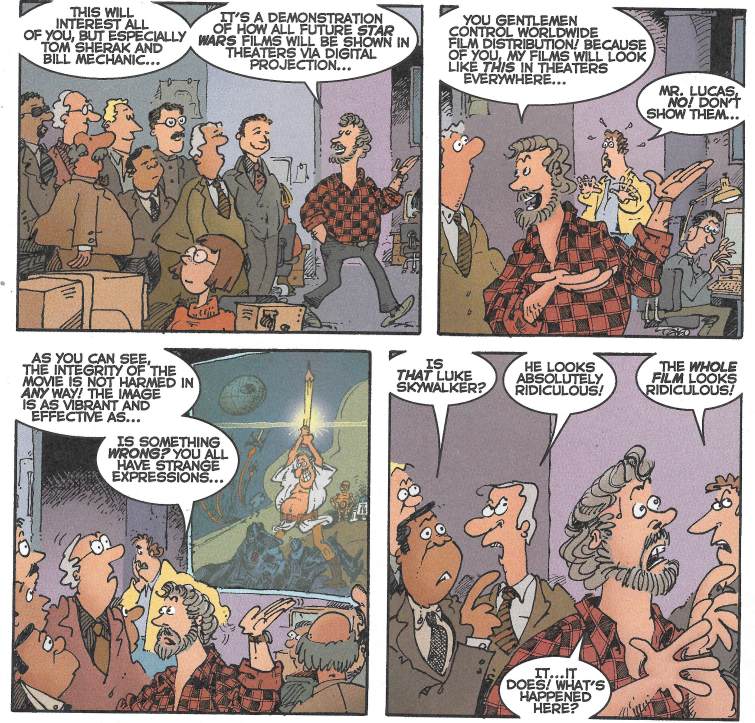 Maybe that’s just a print of Attack of the Clones they are showing?

As Lucas runs after his investors he is tackled by security, Mark gets good news about getting Sergio out of the movie, and Aragones himself receives a heroes welcome party… 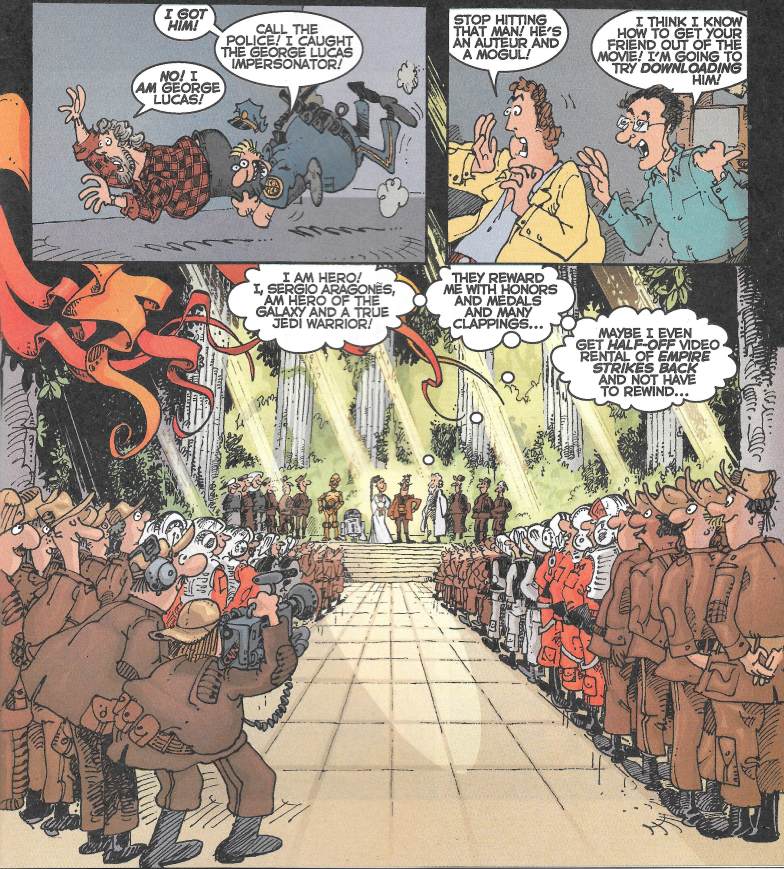 …and a kiss from a beautiful princess. At least he almost does… 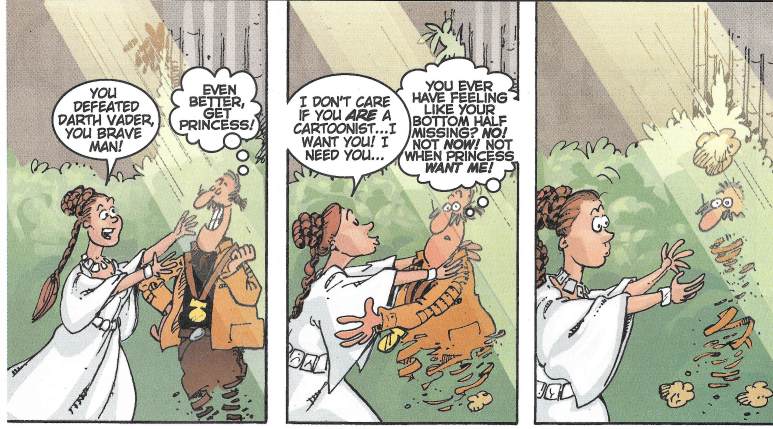 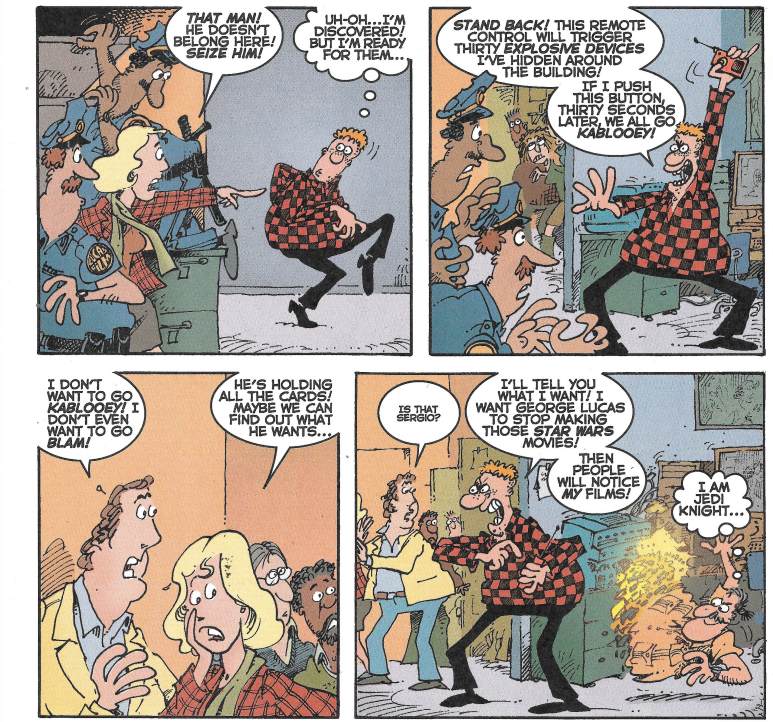 Sergio tackles him and saves, then ruins, the day! 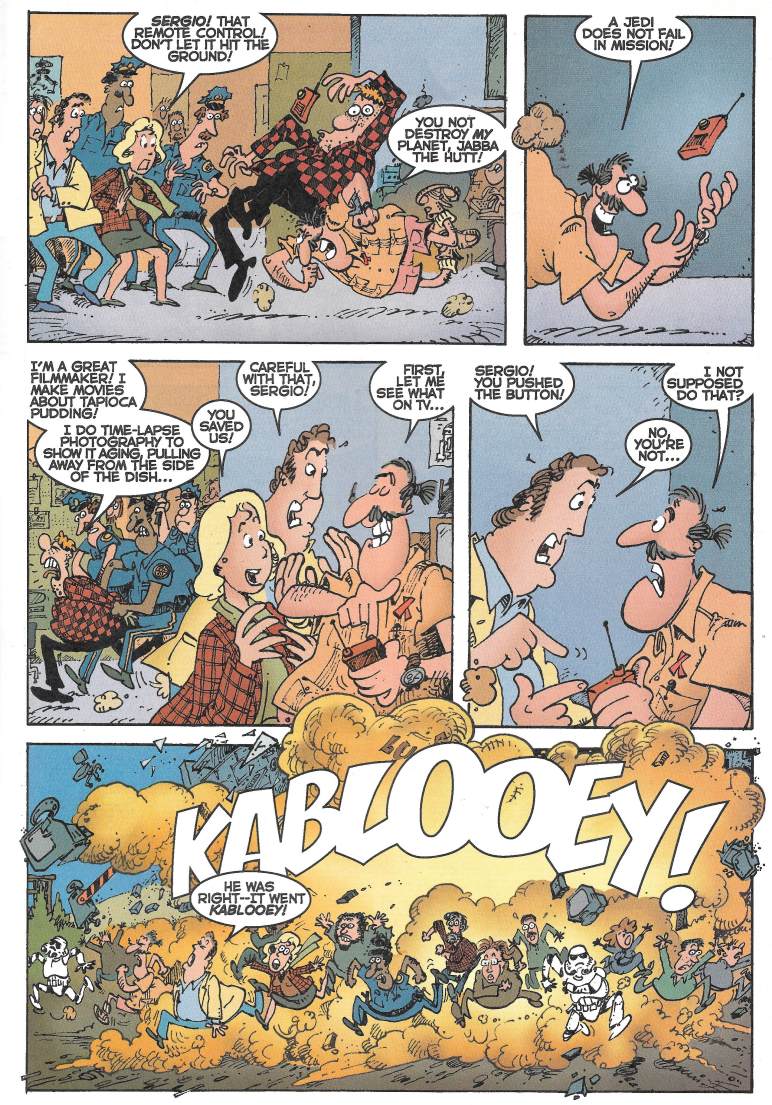 Which leaves our pair without a story to write/draw and as the walk down the street dejected, they bump into someone else having a very bad day. 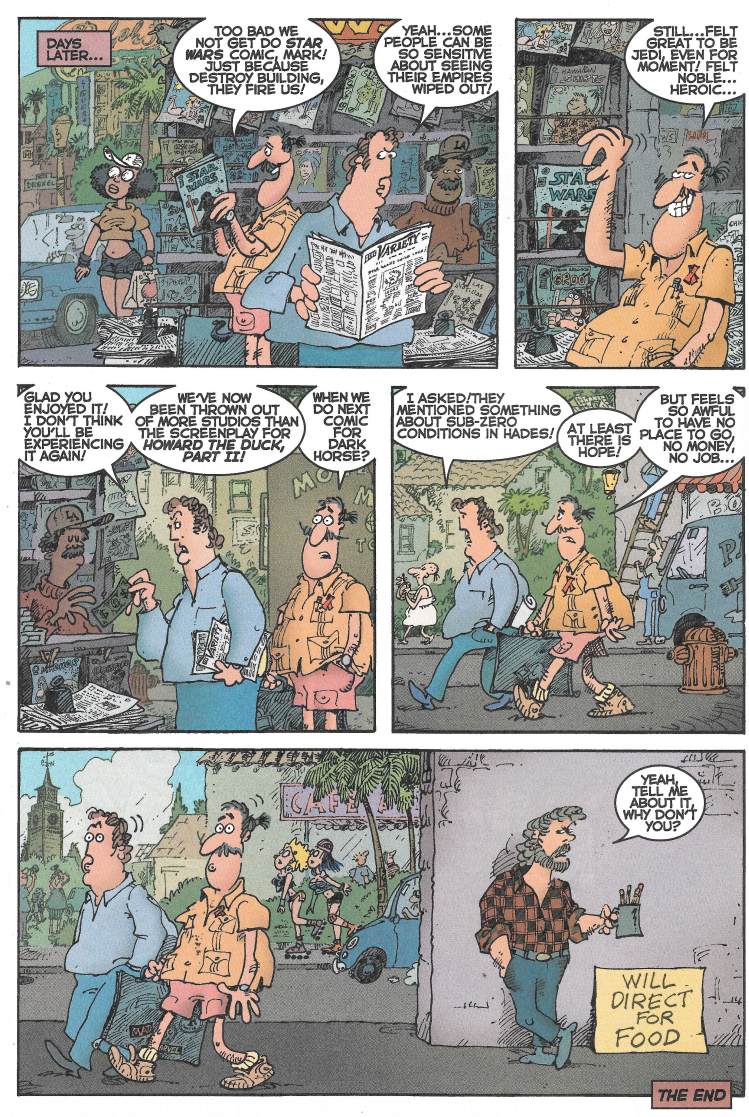 So…LOVED THIS! It was great fun. The Crapbox has two others swimming around in it depths: SA Destroys the Marvel Universe and SA Destroys the DC Universe. I can’t wait to get to them now. This pairing makes for great fun, the art gives me huge feelings of nostalgia and I like these two as characters.

Great find. Thanks, Crapbox!
Posted by SonOfCthulhu at 3:45 AM