Borderlands: The Fall of Fyrestone #2 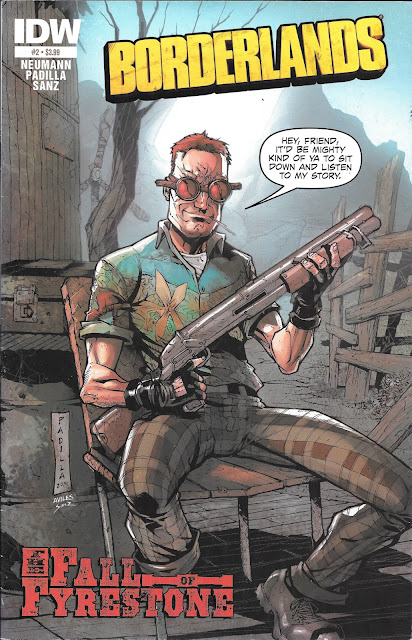 Hey! This videogame tie-in has a complete story! And it's GOOD!

Not certain I’m qualified to review this one, actually.

Borderlands is a first-person shooter that I have seen, but not played. 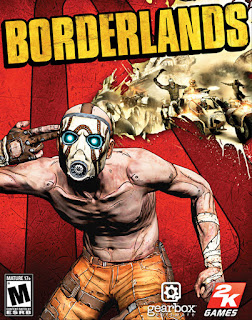 The main draw to FPS players is the incredible weapons generation system which produces a Guinness Book of World Records number of potential gun types based upon the statistics of the weapons. Each gun is ranked with a color indicating that weapon’s rarity and power. White items are common while purple and orange items are super powerful and extremely rare. According to its Guinness win, the game boasts a staggering SIXTEEN MILLION different unique weapons from the combinations of stats like amount of damage, accuracy, special attacks, etc. 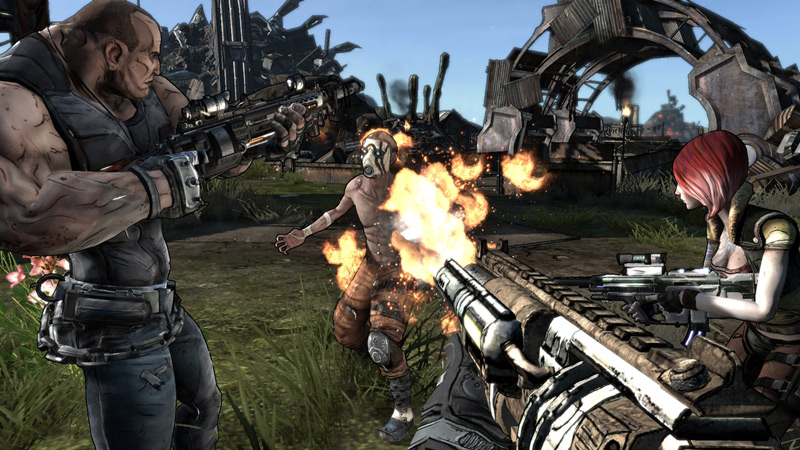 My son has played it, his penchant for liking lots of guns and shooting things and what not. Yes, we did discuss the crude language and graphic violence before playing the mature title. I think his game rating was “Good,” which is excited as he gets about a game. There’s like a “bar” that if a game passes, he is satisfied. If it doesn’t, asking him how a game was gets you an hour long list of things that he didn’t like ending with “it’s not very good.” So… score one for Boarderlands? 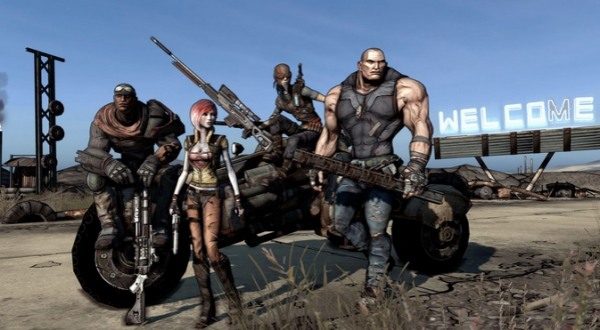 Players choose one of four class types: Roland – a stoic soldier, Lilith – a psychic powered “Siren”, Mordecai – a sniper with an eagle, or Brick – a strong man tank. Each of these four has been drawn to the planet Pandora, a world on the edge of the frontier, to hunt through the wild-west-like desert in search of a sealed vault that contains alien riches.

Which brings us to the story in this book where, as you can in the game working in a co-op mode, we have all four character types working toward finding the vault.

The comics are written by Mikey Neumann, the lead writer behind the first game which gives it a tremendous advantage when it comes to story. Neumann appears to have had some health issues of late which you can find out about HERE and even pledge to help out a little if so inclined.

Mikey literally makes home base one town over from me, living in the urban sprawl that is the outlying Dallas-Denton mega-city one-opolous. He is now doing movie reviews and I highly recommend you check out his twitter feed and youtube channel. (Note to crapbox readers: it was good enough to almost suck me in to the point of not getting a review out today. ALMOST!)
ANYWAY! We have a book here which contains what feels like an actual in-game quest from Borderlands written by a guy that knows how that story structure should work and I’d say we are in for a good ride. Let’s buckle up and take a spin…

We come in to a flashback to a happier time with two prospectors working on Pandora. It’s a nice intro that will have some resonance later on in the story, so I’m going to indulge in giving you a long taste of it. 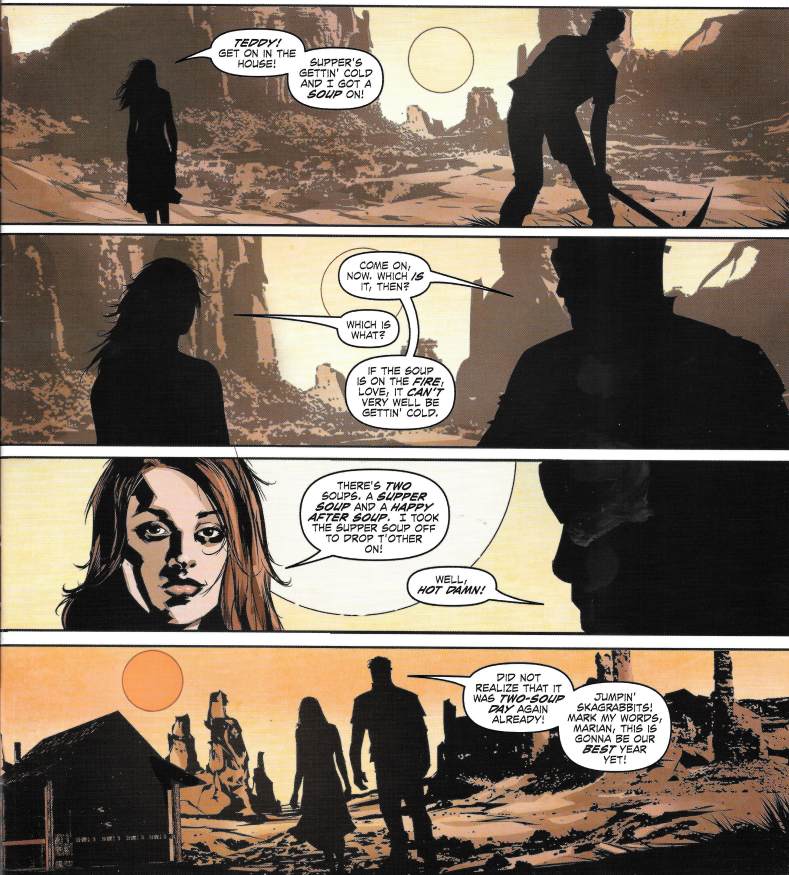 I like that we start out slow gaining a hint of atmosphere and setting. Life on Pandora looks hot, dusty and boringly brutal. Even in those days of struggling to scratch out an existence on the planet there are simple pleasures that make it seem like a paradise.

And we move forward into the now where our four player character types from the game are arrayed outside a shack that looks suspiciously like the one seen in the flashback. Sitting in a chair and holding a shotgun is a one-legged man. He looks to be asleep and our quartet pow-wow over how to approach him without getting a face full of shot. 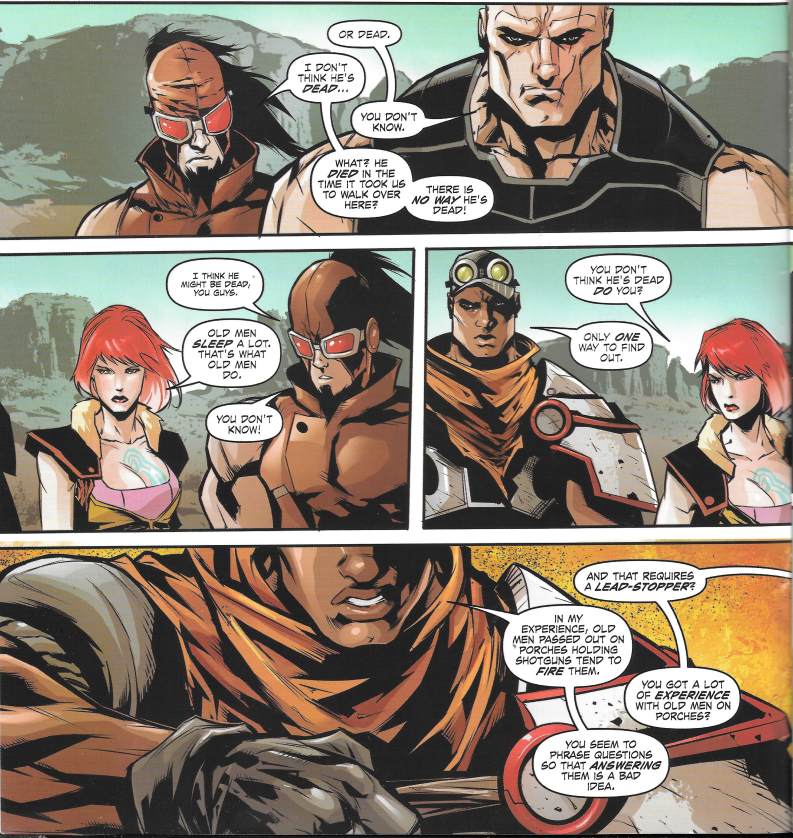 I like that we introduce the characters this way, in a slow roll through how each approach a potentially deadly situation. As a person unfamiliar with the game and at the mercy of the randomness the Crapbox throws me, it is nice when the author gives me an easy jumping on point so I can identify who these people are not just by their appearance, but also by how they think and a little of who they are.

Now on to Roland heading to the porch alone, right up until Lilith joins him. We get a bit of background on both characters who appear to have a bad military experience in their past that they are searching for an escape from. 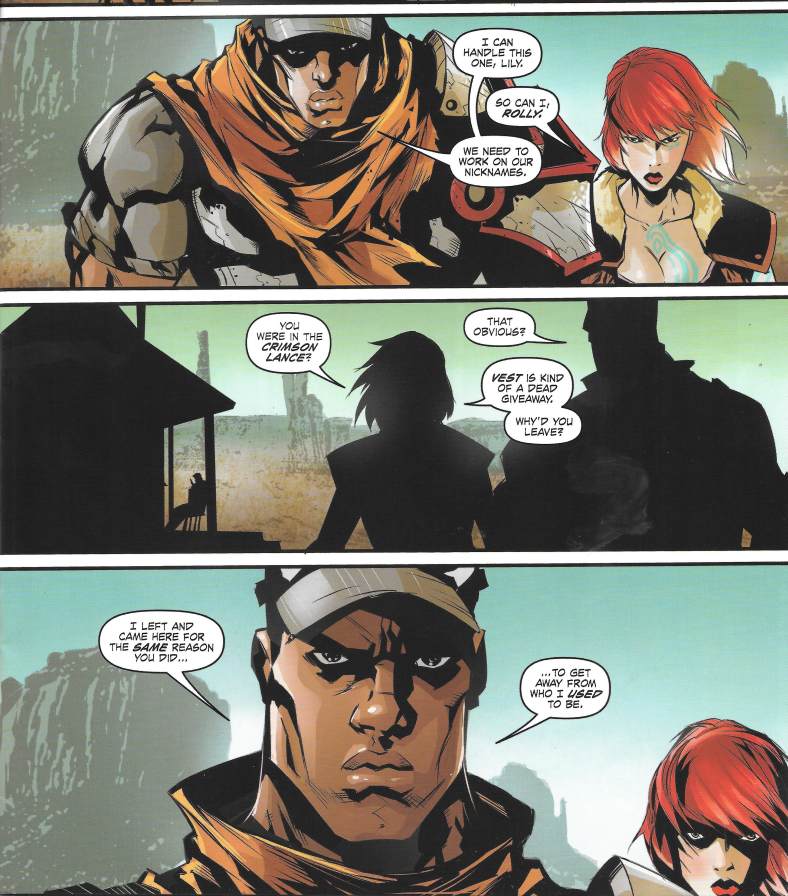 The blocking makes it clear that Roland is our leader but Lilith is our wild card. She takes point and wakes the one-legged, armed guy, which turns out to be a mistake… 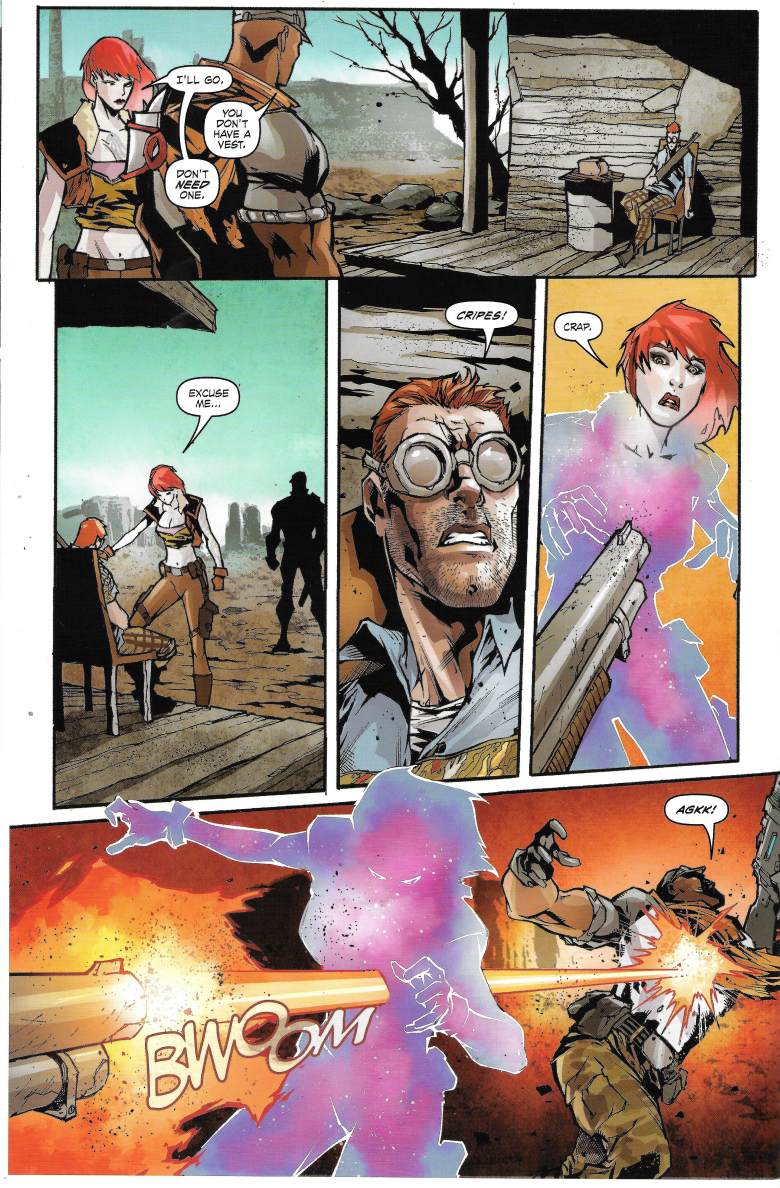 …for Roland who takes one right in the bulletproof vest.

This amuses Mordecai and Brick. Lilith disarms out shooter and the checks on Roland. 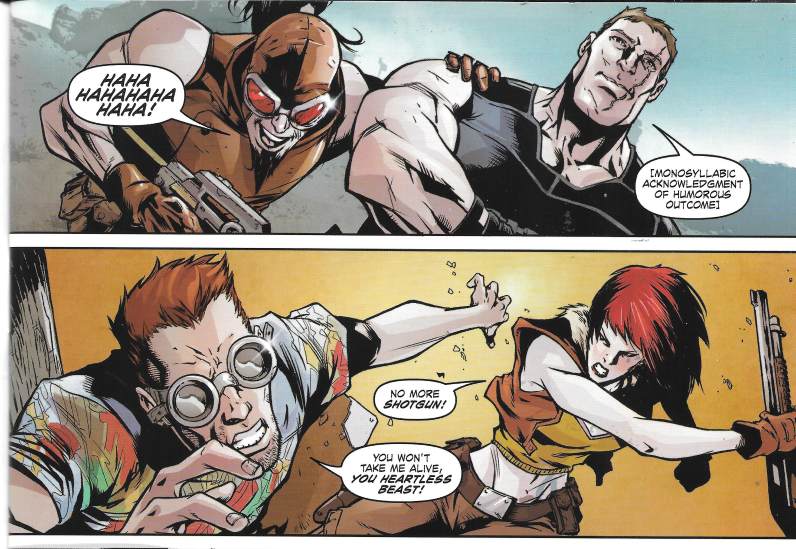 Then we move straight to the "conversation with a game NPC cutscene," which feels like an authentic in-game transition. Our pack needs wheels. The one-legged guy knows how to get wheels. But he needs something done first, I feel it coming… 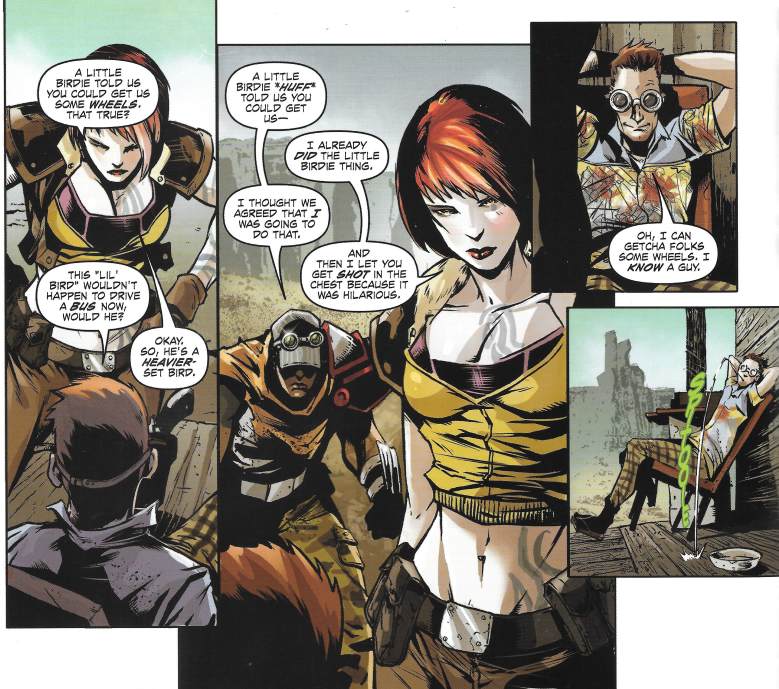 …and ayup! There it are. Kill this monster, gain this ride. I suppose we need the full story. 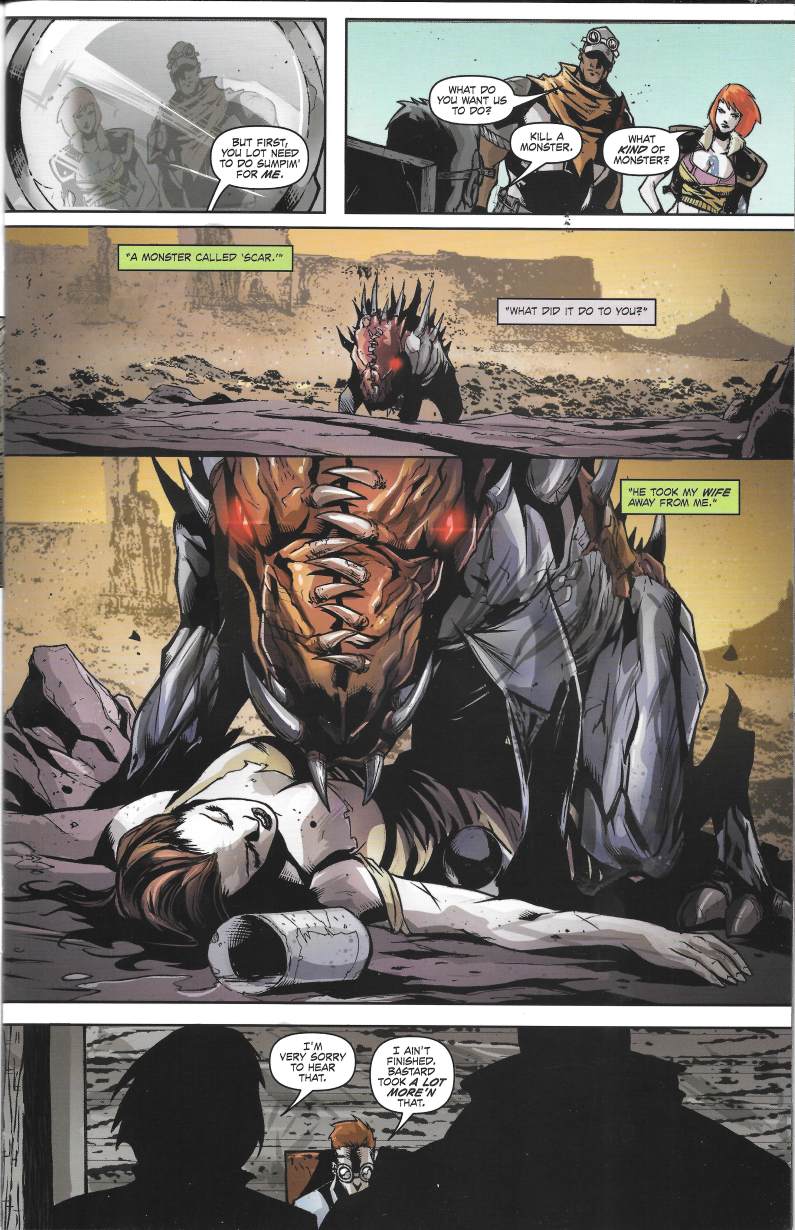 Which we get along with some of that in game violence and bloodshed we were mentioning at the beginning. Along with that, we get a wounded monster that takes all of this poor dirt farmer’s life with him even without killing him. 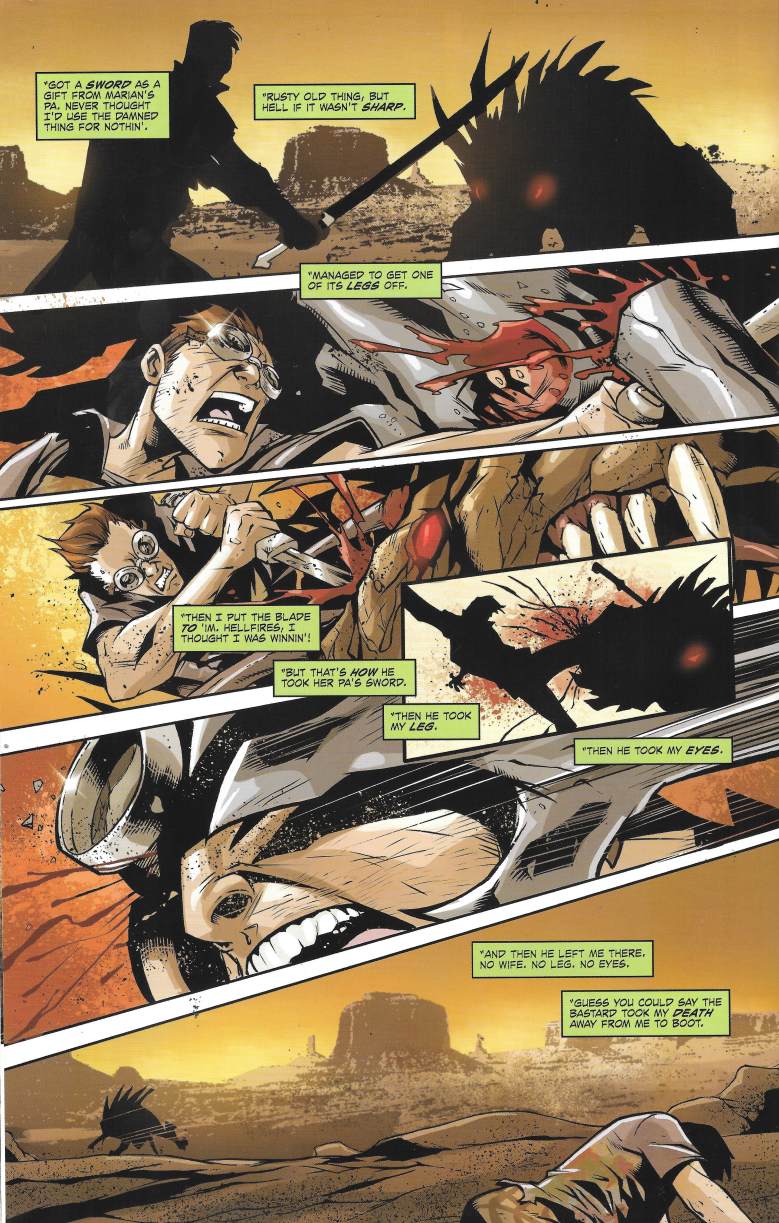 And with the gruesome graphic of him dragging his dead wife’s body back to their shack for burial, a burning desire to see the beast dead grows from a smoldering ember to a bonfire. 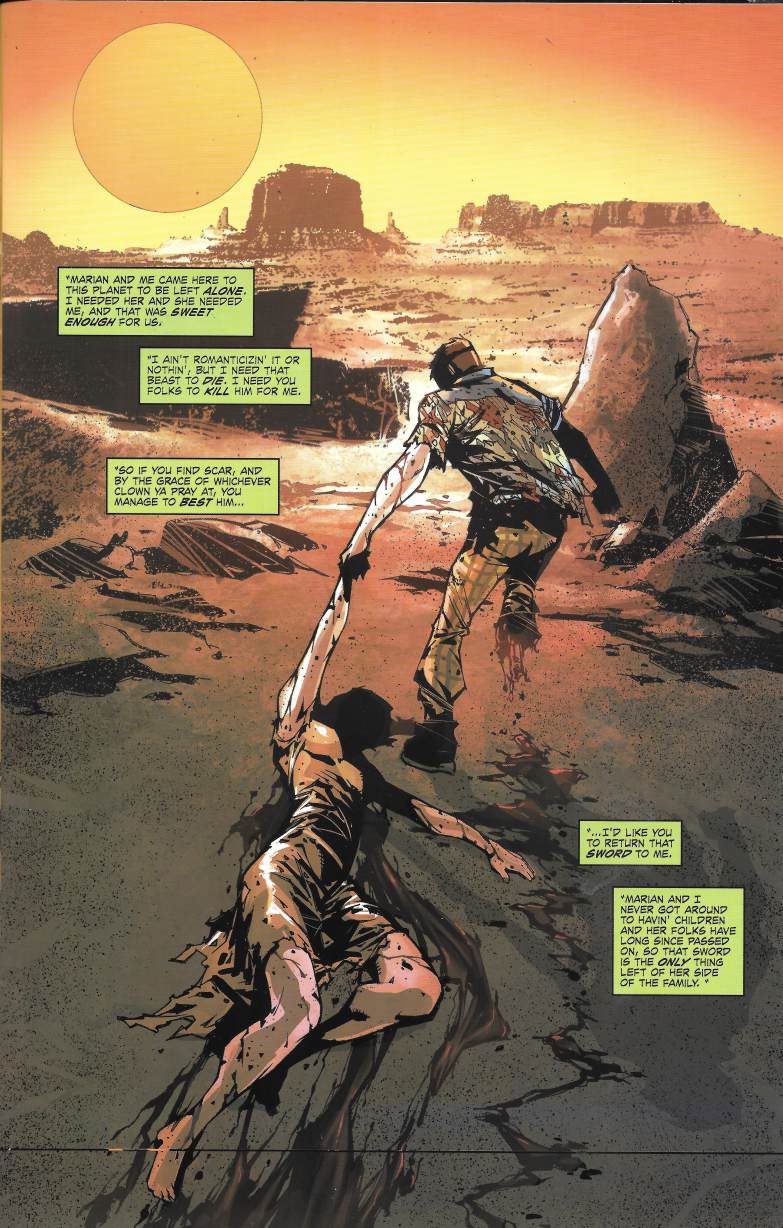 Roland expresses empathy with the man and tells of losing everyone in his whole unit (as seen in the Borderlands: Origins comic, which Crapbox also didn’t provide me) through the actions of a man named Higgins. Roland sought revenge. This is a nice bit from that. 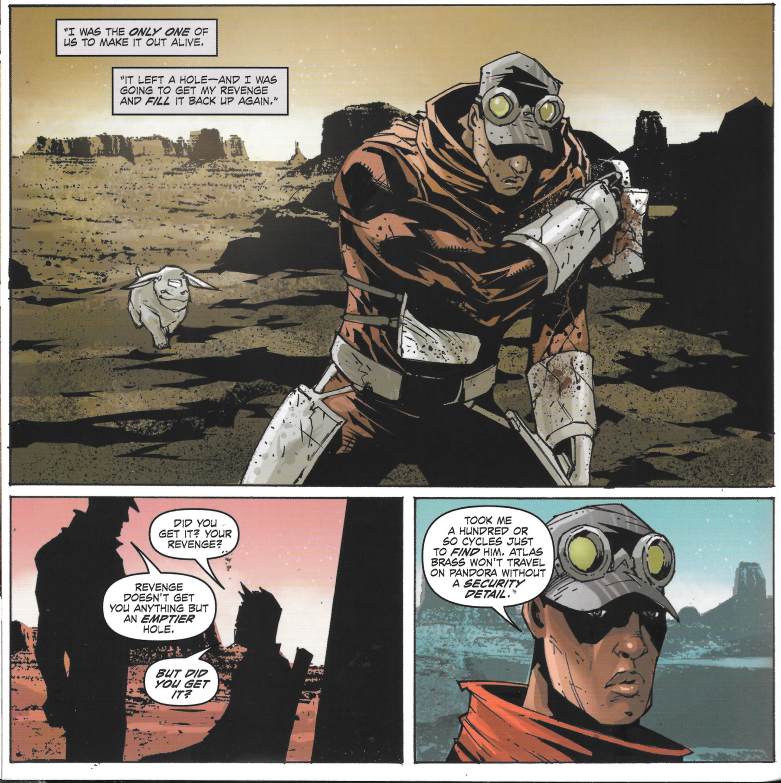 Even if it is a bit unorthodox. 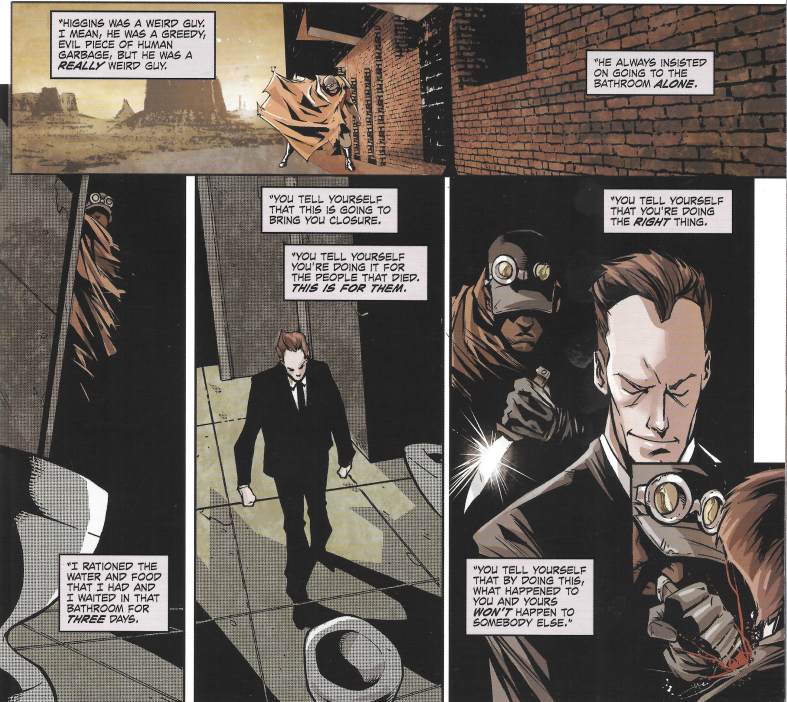 His words don’t stop our goggled shooter from wanting his revenge, however. Maybe because it isn’t just vengeance that is driving him. 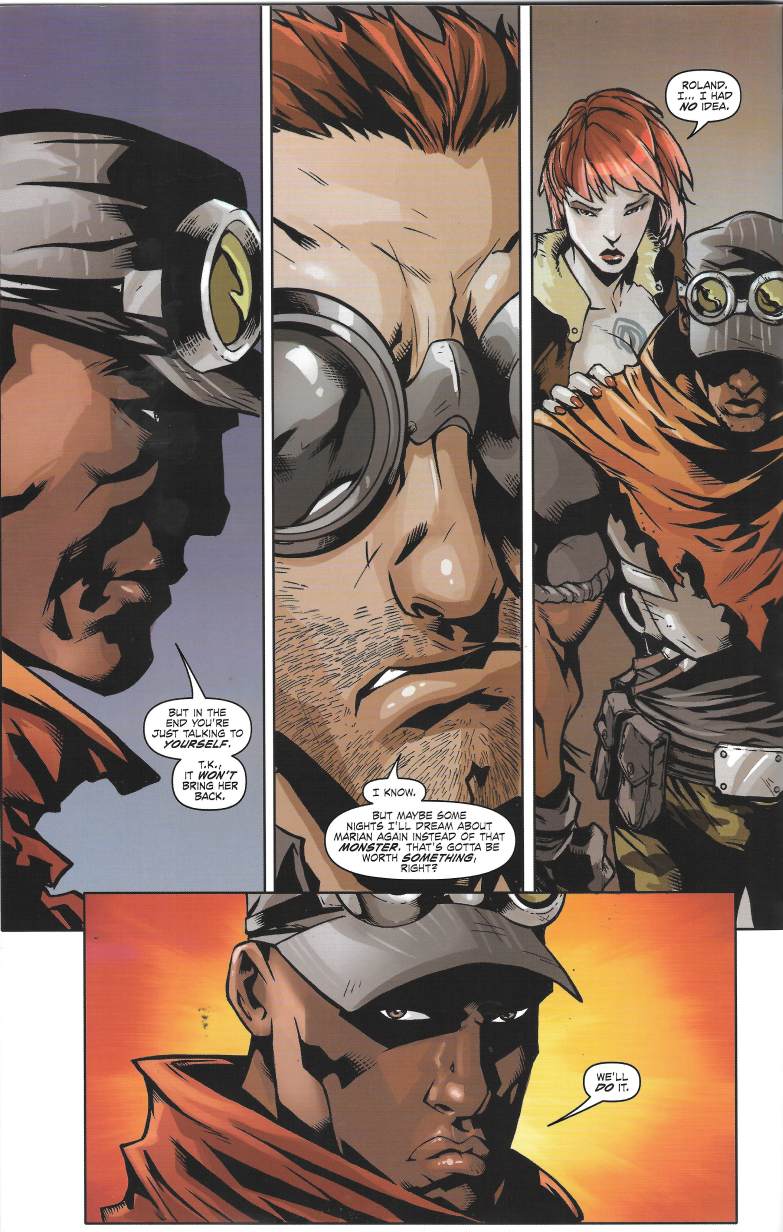 All of this works well in drawing us in to a conflict we should have little investment in but now do. It’s easy to see with Neumann behind the wheel how Borderlands was such a popular draw BEYOND the eighty gagillion weapon types you might acquire. If this is common for in-game related interactions, I’m down with a play-through. Even with my old man thumbs and reaction skills of a distracted slug.

But on to killing our beast: we get a good look at it from a clifftop view of Shag Valley, which I assume is not a place where you would actually shag, given the native population of giant, tooth-covered killing machines.

Mordecai registers a complaint about their current course of action… 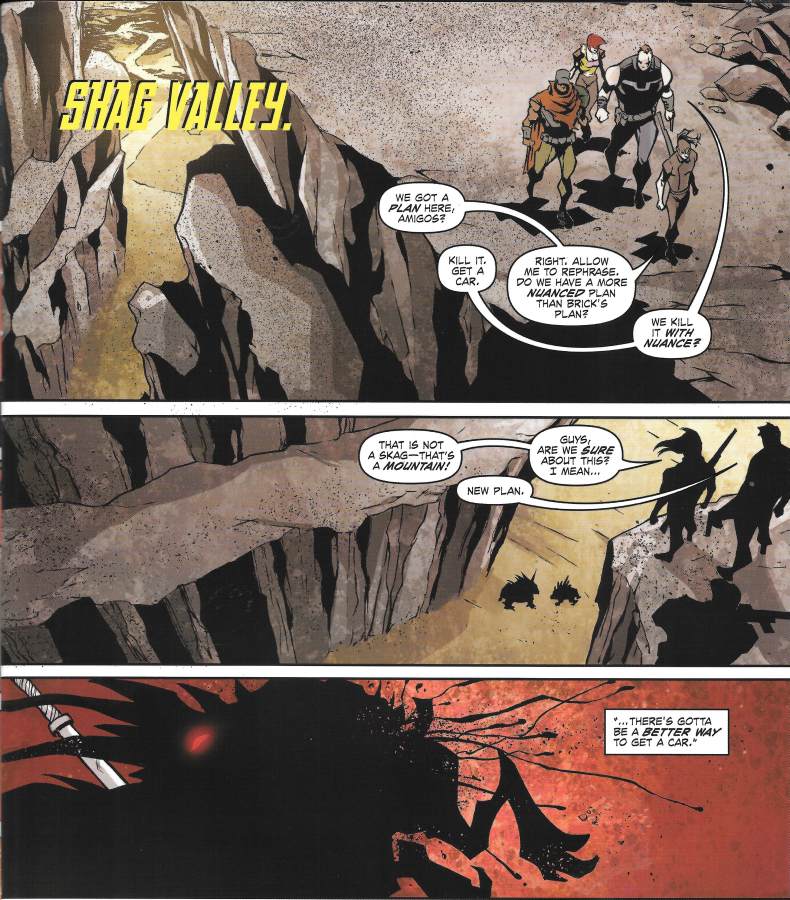 …but of course there isn’t any other way to get a car because “story mode” says so. I’m fine with that. Not every choice has to be openended, as long as the resulting narrative is entertaining. It’s nice to see an in game/book character actually voicing it, however.

Lilith comes up with a plan off-panel and we go directly into implementing it and gaining the sword. First a bit of brief instruction that serves us the audience in seeing a bit of what they are doing. Roland is setup as a sniper, but it is clear he won’t be able to take down the beast by that alone.

As for the others… 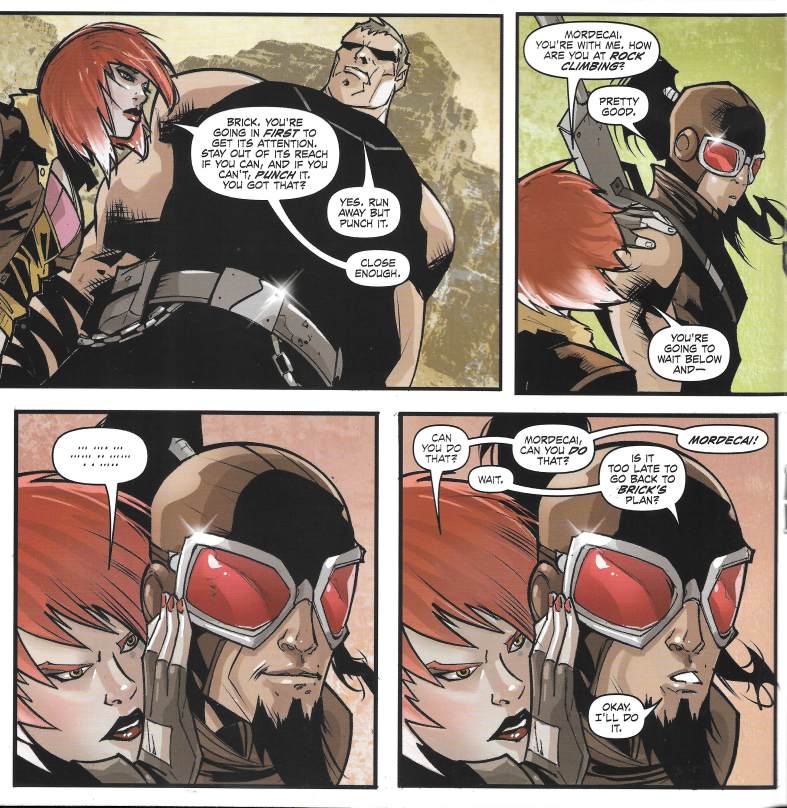 …they are on board, for the most part. 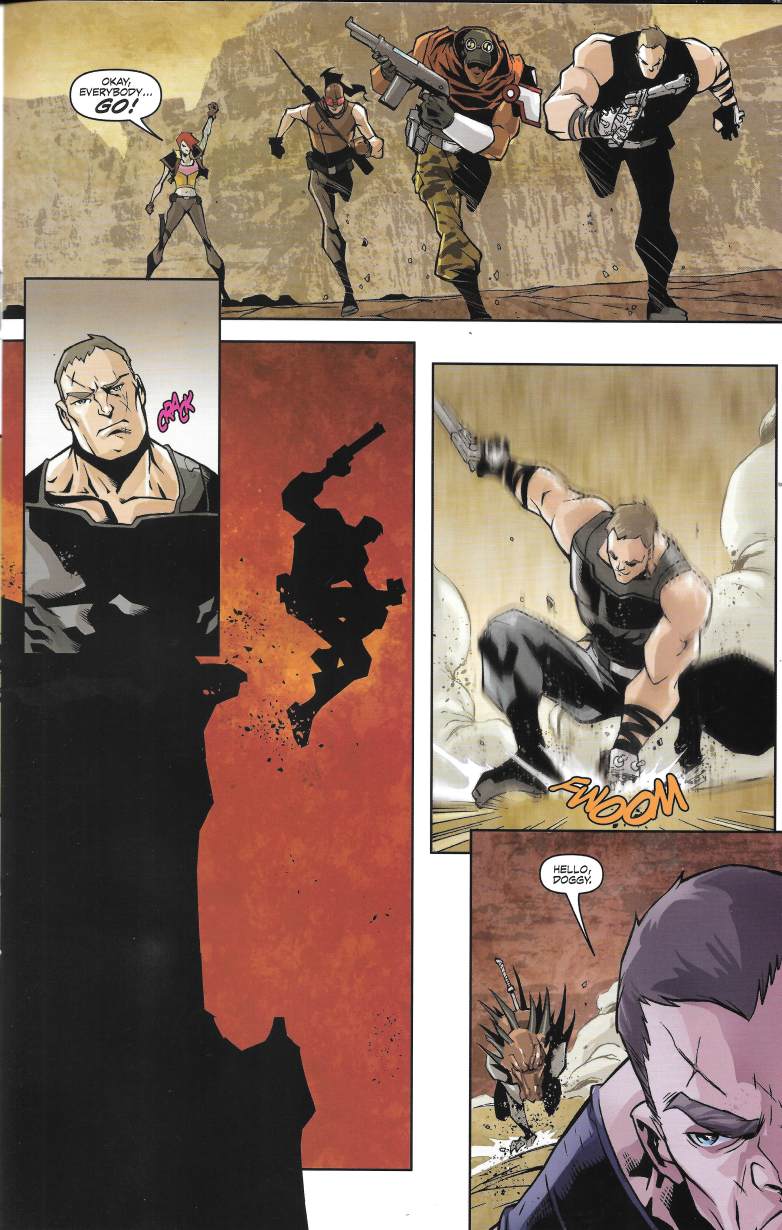 Brick starts by jumping into the valley with the crazed monster, shooting it several times at close range. Roland serves as a kinda crummy sniper, most of his shots coming in way off. 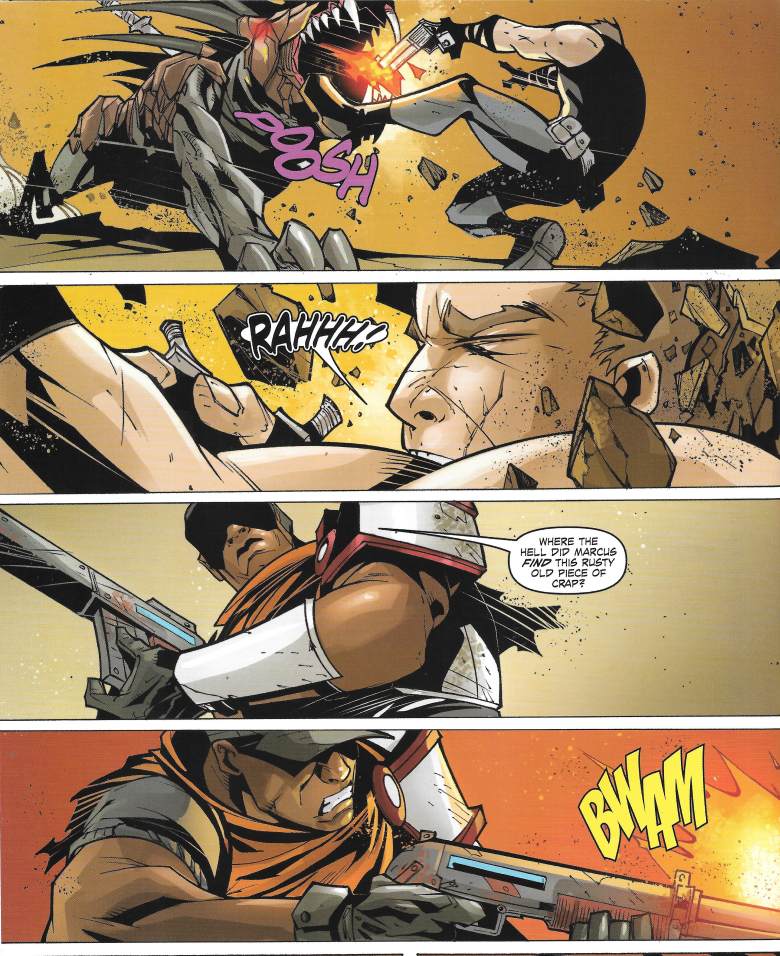 Love this bit with the beast flinging a boulder at Brick. 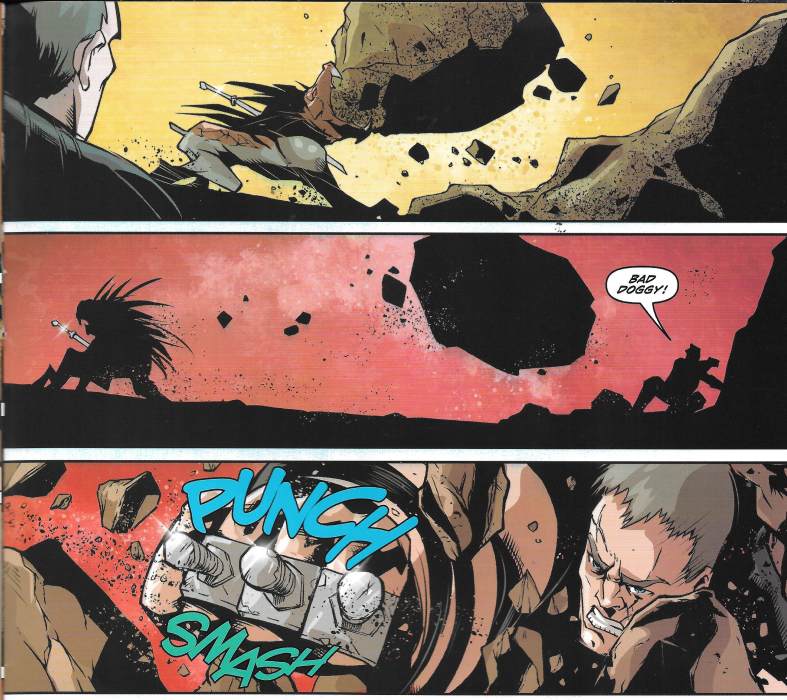 Roland finally hits the beast where it counts and it tries to take off only to find an irresistibly tempting target in Lilith. Little does it realize that this is a bit of a ruse. 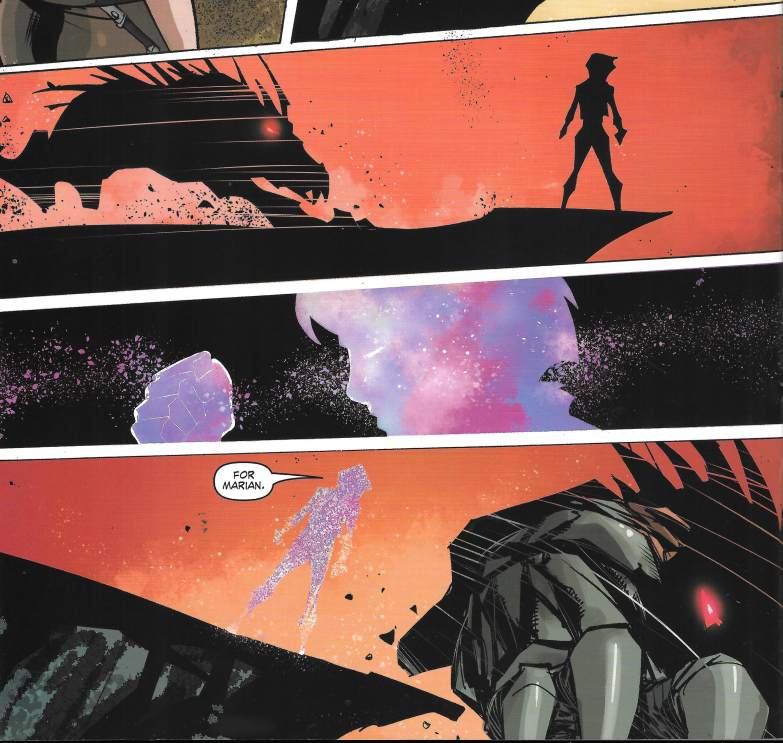 As it plunges down the cliff face, Mordecai does the ole Ginsue knife trick… 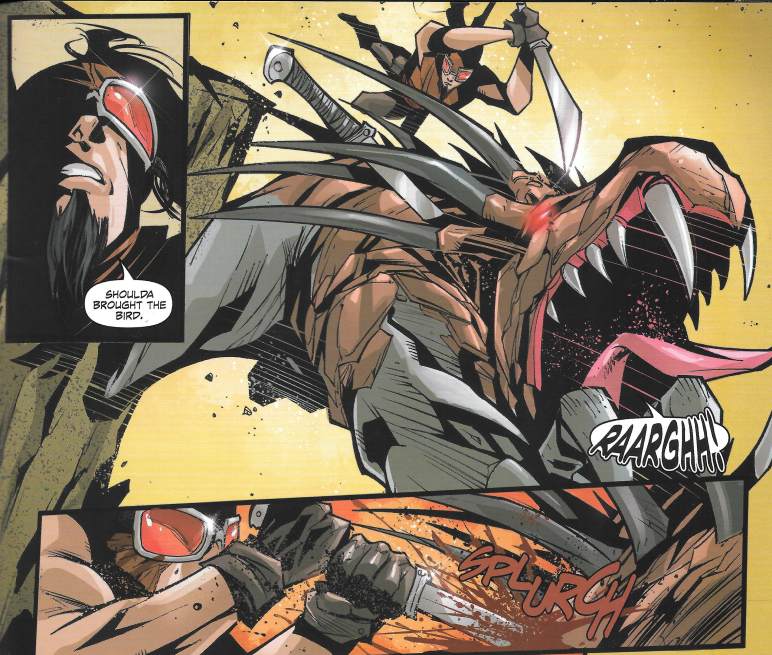 …and uses the beasts body to survive the fall. The creature isn’t breathing after all this and Lilith moves in to retrieve the sword. 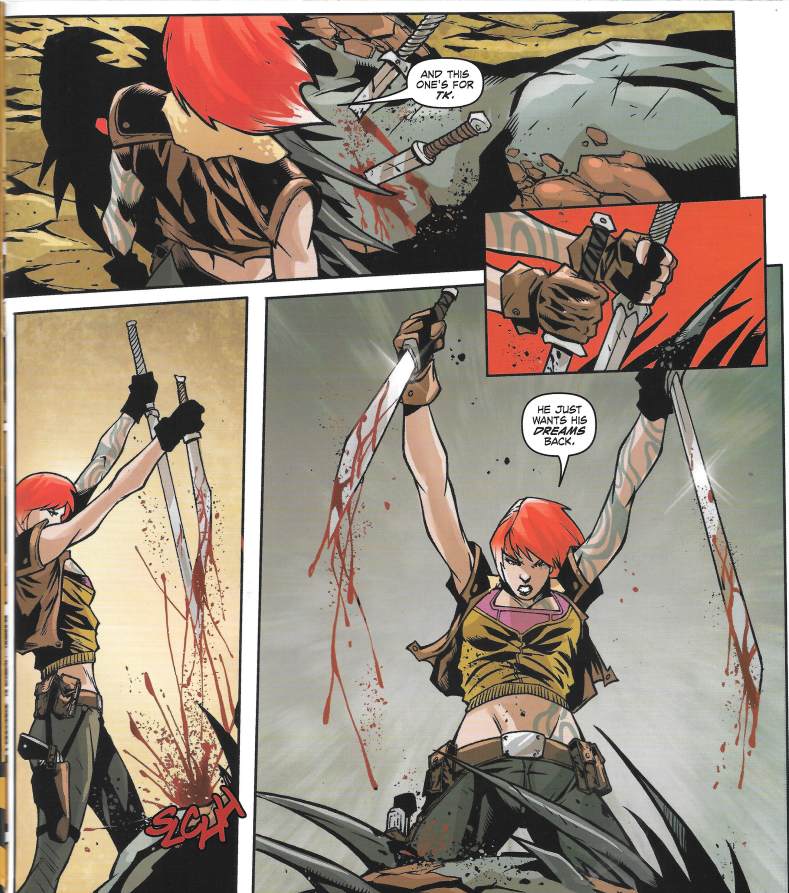 And with that she lops off the beast’s head.

As for the party after this battle? They return the sword to our one-legged prospector and we get our happy ending with its bittersweet echoes of our opening. 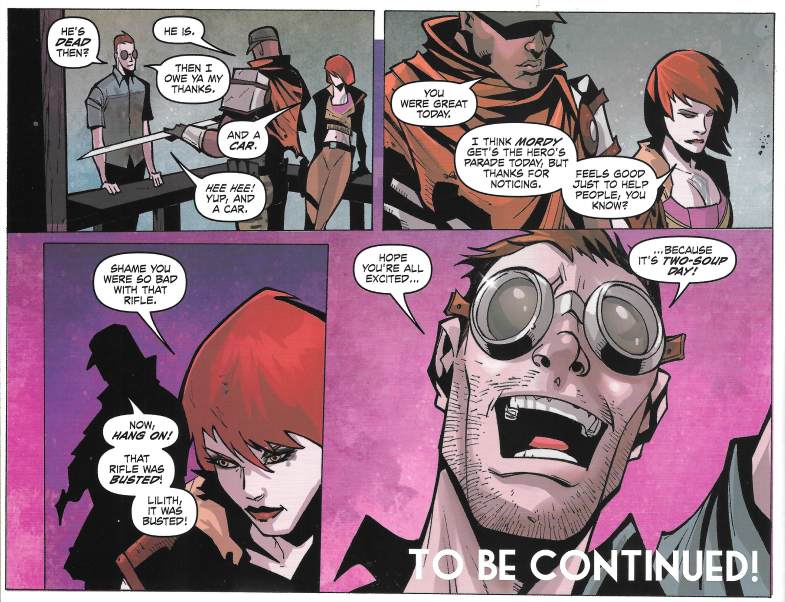 So…great art and an impressive story. I liked this issue a bunch, enough to want to find more in the bins and enough to stoke a desire to see how the game plays. Maybe if I can borrow my son’s X-Box for a bit I’ll get a chance to check it out.

Till then, I guess I’ll have to stick my joystick fingers back into the Crapbox’s pre-Christmas toy tie-ins.
Posted by SonOfCthulhu at 4:05 AM