Some random Spider-Man books, Part 4
With Spider-Man villains you take the good… 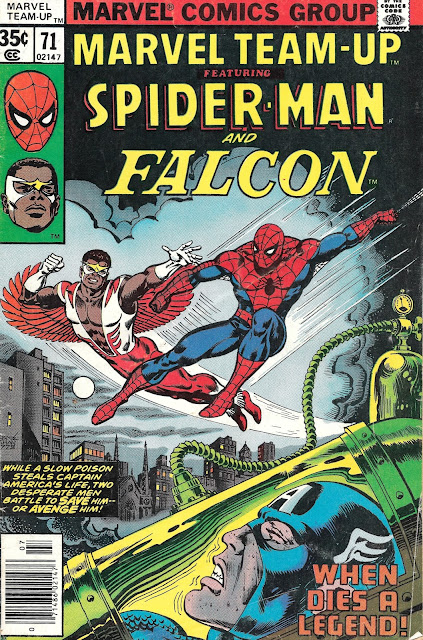 …along with the really, really bad!

Spider-Man has one of the best rogue’s gallery in all of comicdom. Their names are synonymous with fear and dread, these perpetrators of great criminal deeds and sinister master plans.

All of these fellows are Spider-Man’s heavy hitters. But along with his big league competition, there are some Spider-Man foes who aren’t even up to T-Ball status. Since this is the crapbox, we bat about 50/50 when it comes to the stature of who our arachnid avenger faces off against. On those instances where we end up a little short, we find ourselves dealing with a Walrus...or a Corona (lime, please?).

In this story, writer Bill Kunkel didn’t allow Spider-Man to take on so fearsome an adversary as Plantman all by his lonesome. Oh, no! That wouldn’t do. What if he succumbed to Plantman’s power of…uh, power over…um…

Okay, I’ll level with you, folks. I don’t know if the Plantman has any powers. I guess we better read the story to find out. 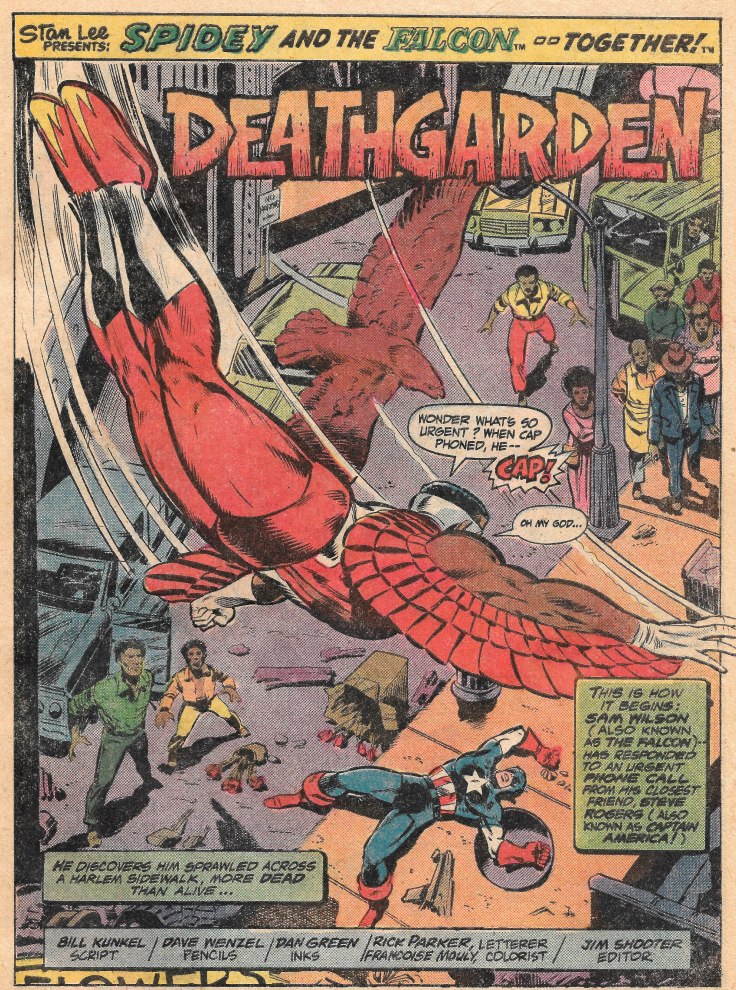 Steve’s in a bad way and the only clue as to how he got that way is the flower he is clutching in his hands.

Before playing detective, Sam can tell Steve needs medical attention. One call to S.H.I.E.L.D. later and the bad news of Steve’s condition becomes clear. He’s dying. And it’s not because of crappy VA Hospital services either. It appears he’s been poisoned! That flower in Steve’s hand wasn’t just toxic, it was of a variety S.H.I.E.L.D. never encountered before. By the time they develop an antidote, Steve’s a goner. 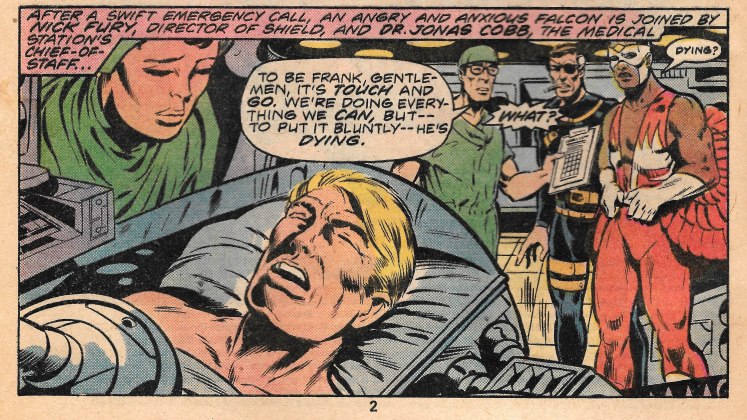 Who could have done such a dastardly deed? 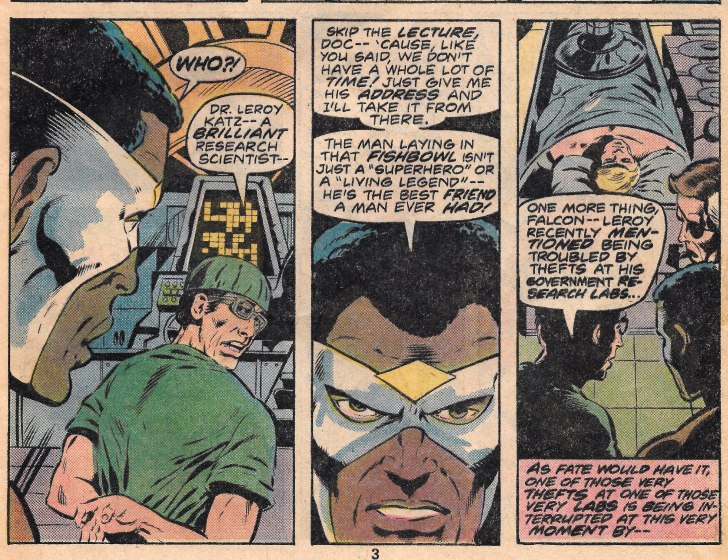 The head doctor has an idea of someone who might be researching plants such as this and his lab has been broken into recently. Falcon is off like a shot to save his pal. 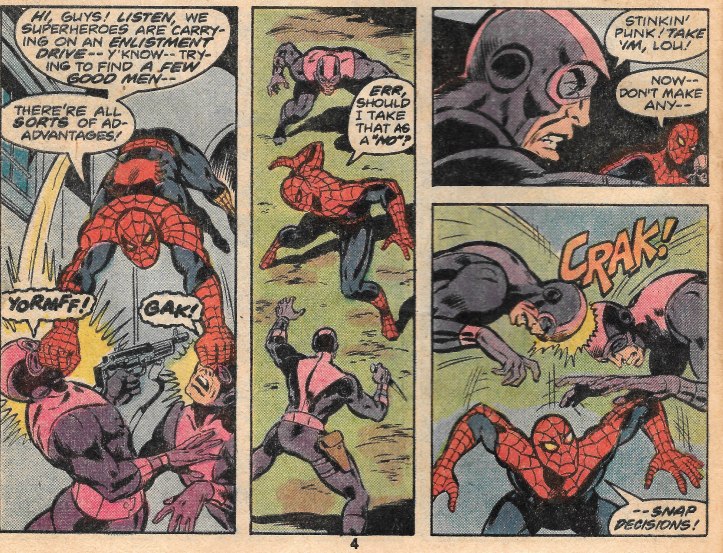 And wouldn’t you know it? At that very moment, criminals in matching jumpsuits are stealing a load of super-secret, special fertilizer. Never fear, though. Spider-Man already has the situation well in hand, having seen the theft occurring while swinging by on his nightly patrol.

As Spider-Man takes out the last thug, Falcon shows up on the scene. 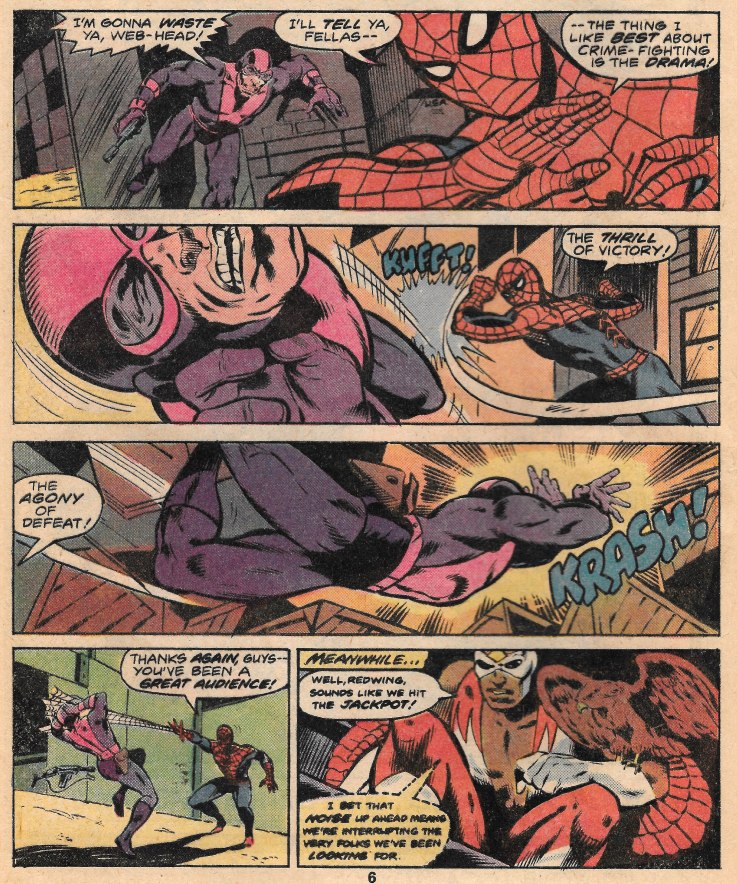 It’s only at this moment that Spider-Man realizes that he’s been protecting potting soil, a revelation that earns out web-head a brief nap courtesy of a zappy ray gun and a not quite konked-out criminal. 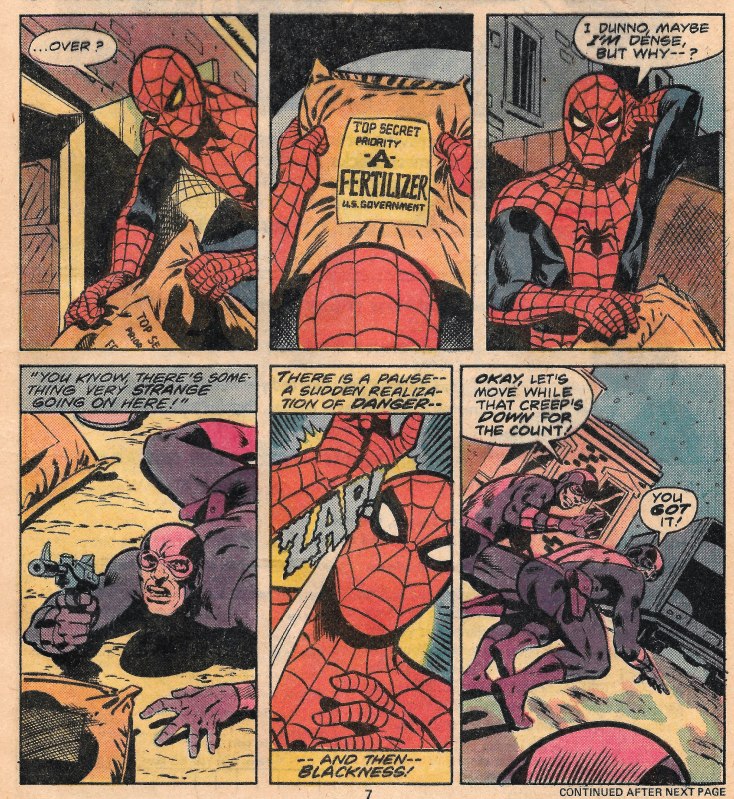 In a flash a few of his quarry slip through his fingers. Then The Falcon makes his presence known and starts a shoving match. Appears he is completely rattled at the thought of losing Cap, so much so that he’s telling stories in reverse order. This confuses Spidey and we get a brief scuffle while the heroes work out what’s what. 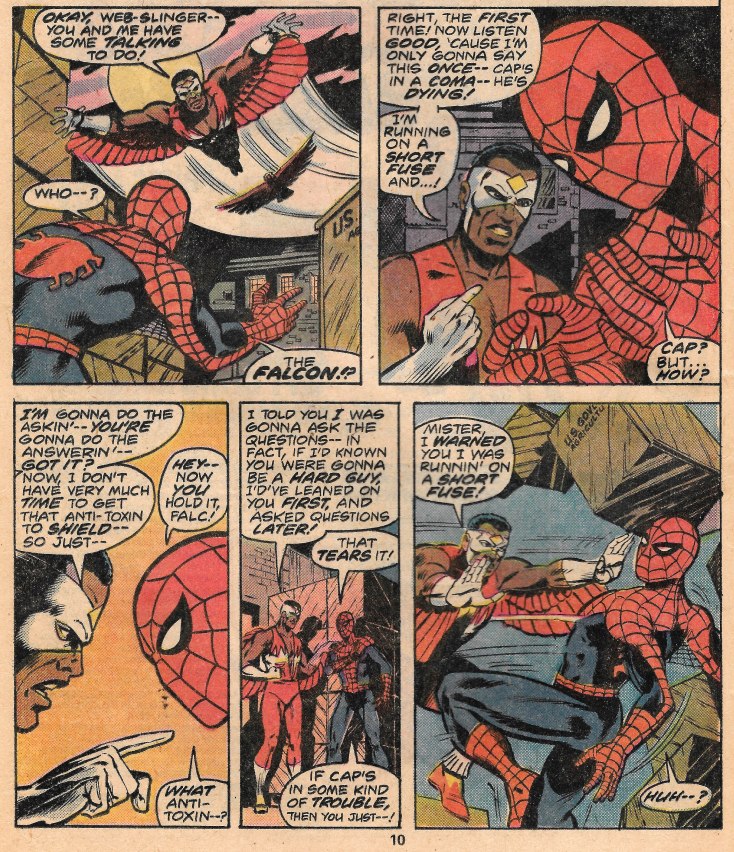 Falcon seems to think Spider-Man has the anti-toxin and was stealing the fertilizer. It isn’t until he gets tossed next to a downed henchman that he realizes what’s really going on. 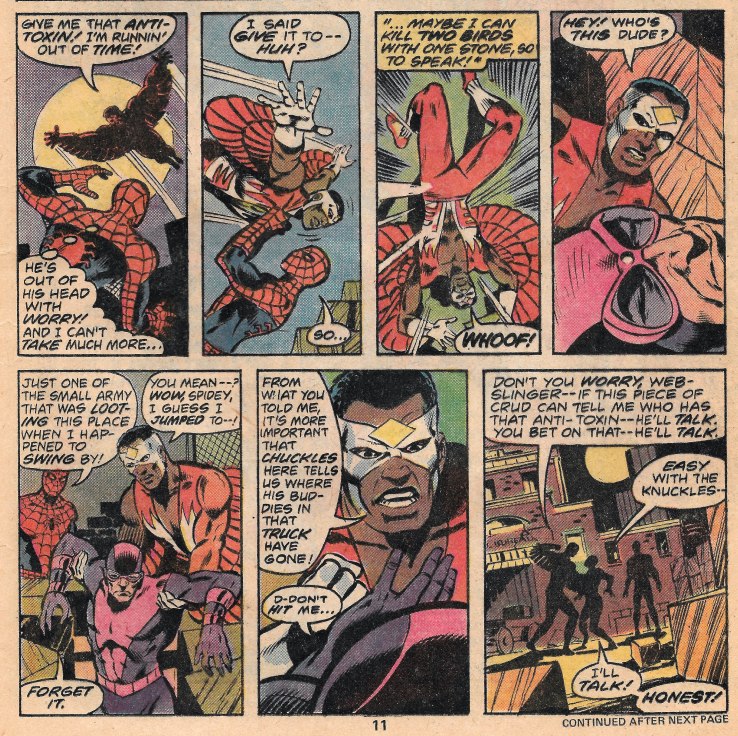 And talk that criminal does. His information leads the duo to this palatial estate on Long Island Sound. Seems our super-villain du jour isn’t in the game for money. 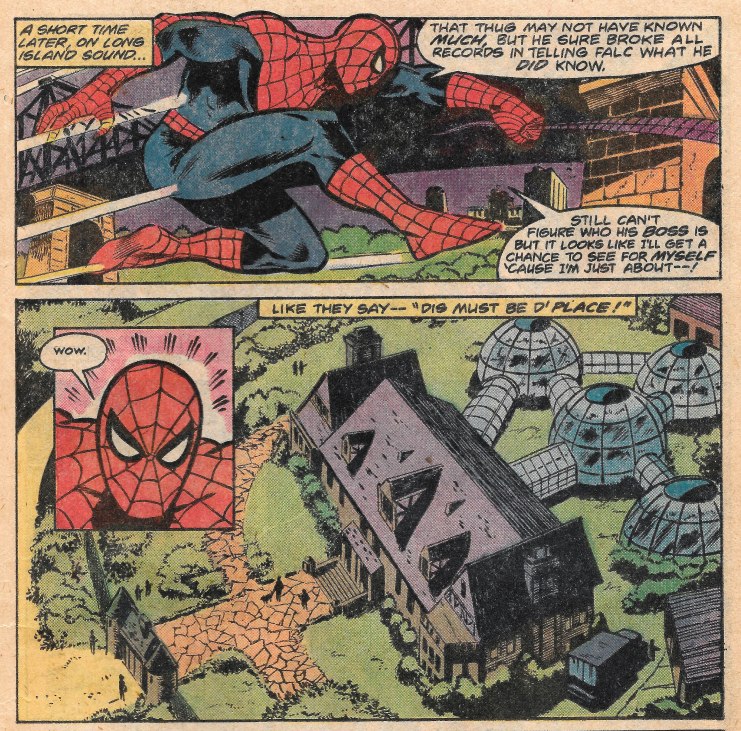 After webbing up a couple of guards, Spider-Man steals a uniform and makes his way into the manor house to find the anti-toxin, which is much better than Falcon flying in and trying to take these guys on one at a time. 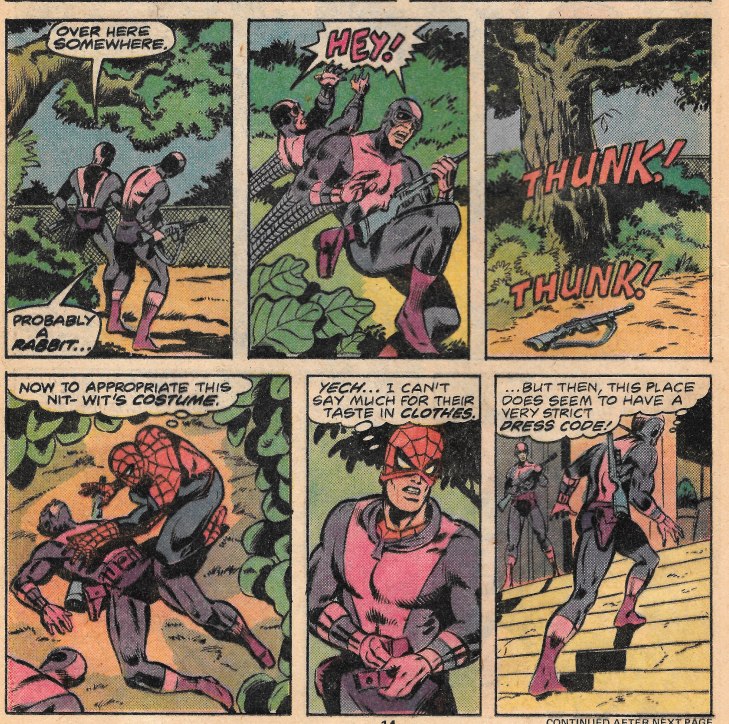 And it is here, while undercover, that Spider-Man discovers the identity of Cap’s poisoner…none other than The PLANTMAN. (da-da..da-da..da-da…da-da..da-da-DA! PLANTMAN!) 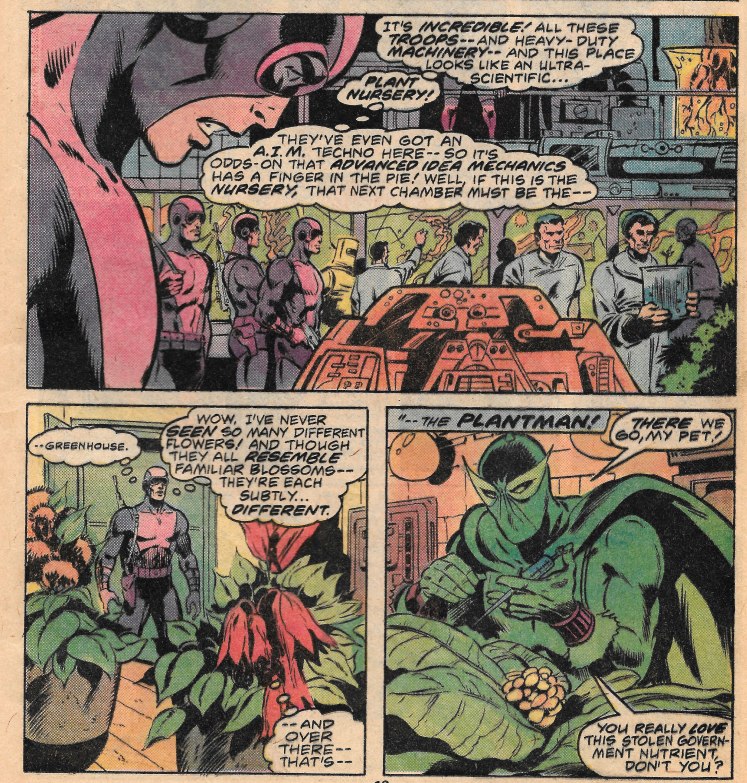 I’d talk about how lame the Plantman is, but look at him here. 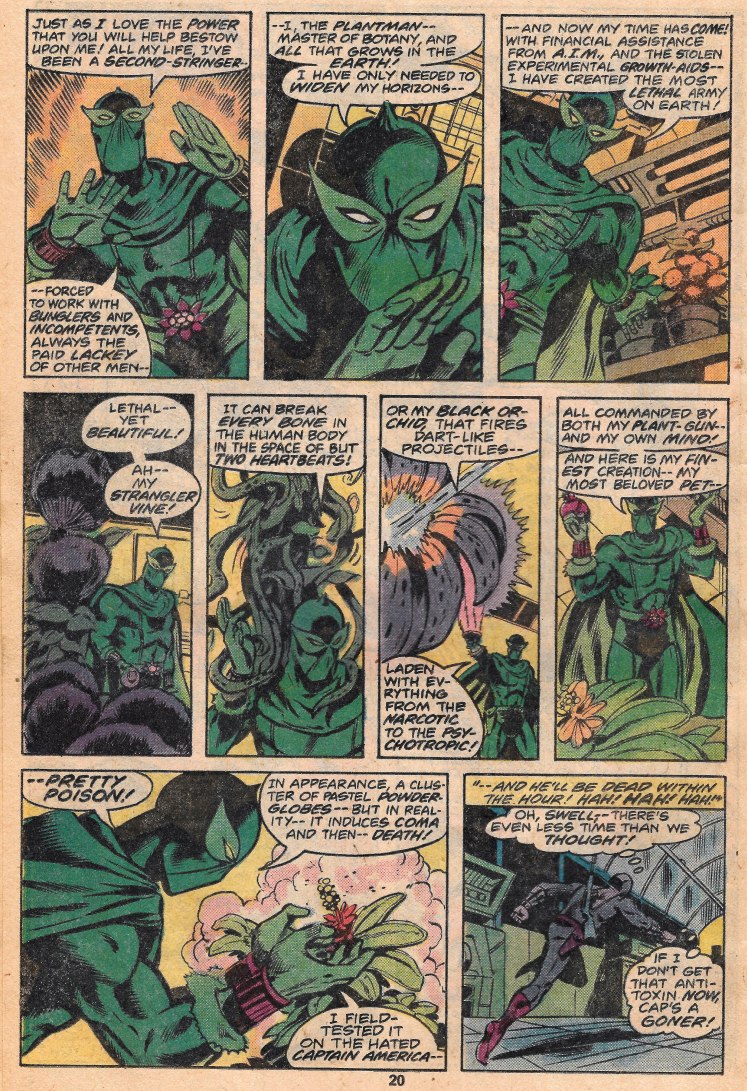 He gets an entire page of TALKING TO HIMSELF, he is so pathetic. Monologuing to your arch-nemeses is fine, but he doesn’t even get that. He just spends his time wearing green tights and telling his plants how “Daddy is going to rule the world one day, and won’t those mean superheroes RUE THE DAY they ever made fun of Plantman.”

You know – Okay, enough with me picking on the guy. He is a credible threat. He is the only person standing between Captain America and death right now. Let’s show him a small modicum of respect.

It’s not like someone could just burst in and trick him into giving up the location of the anti-toxin. He’s more intelli--* 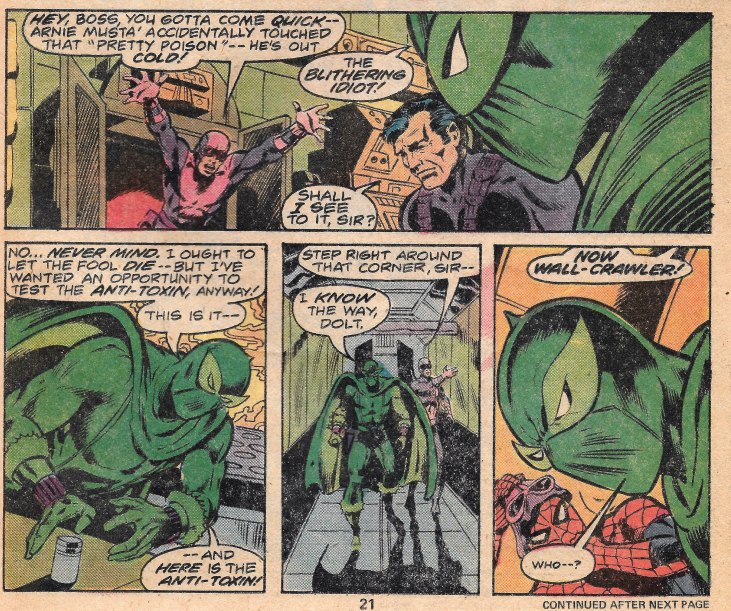 And actually the hardest part so far has been listening to Plantman prattle on for an entire page. 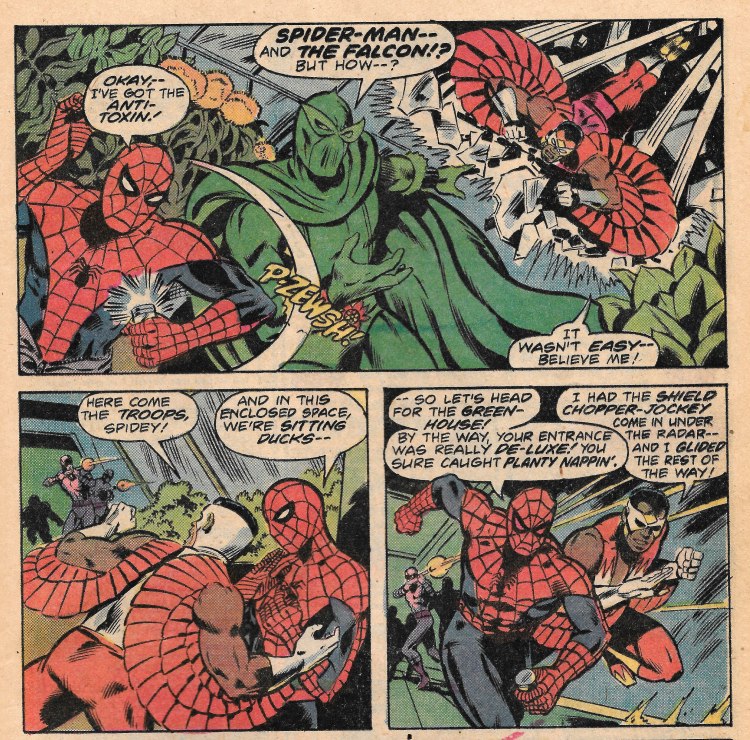 But now the heroes have brought the wrath of Plantman himself down on them. He uses his plant control gun-thingie to have that creeper vine strangle Spider-Man. Next he uses it on a black orchid to have it shoot razor sharp spikes at Falcon. 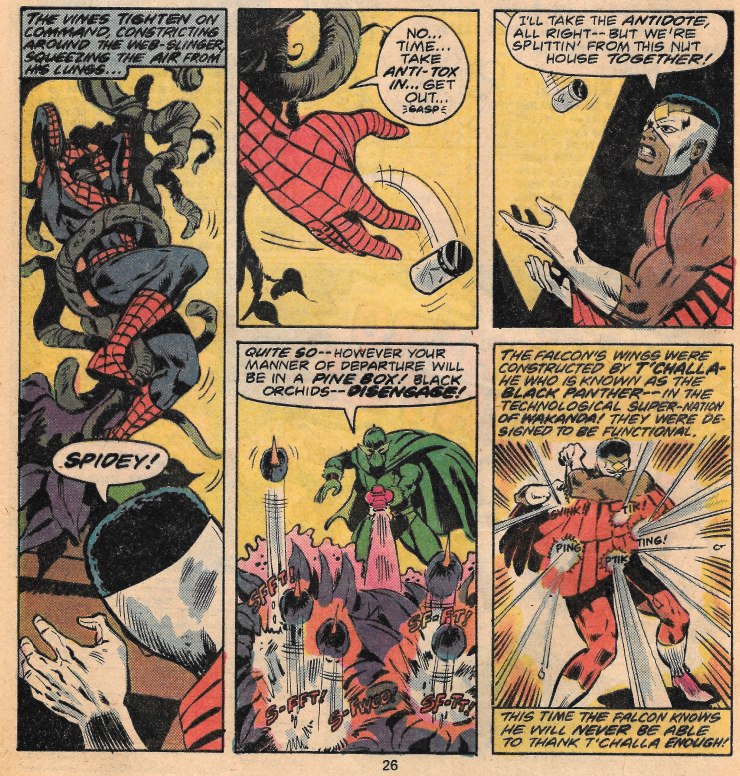 I’ll give him this, in a deadly greenhouse full of weaponized plants, Plantman does alright against a couple of heroes. However anyone can see it’s just a matter of time until someone gets close enough to take him out. 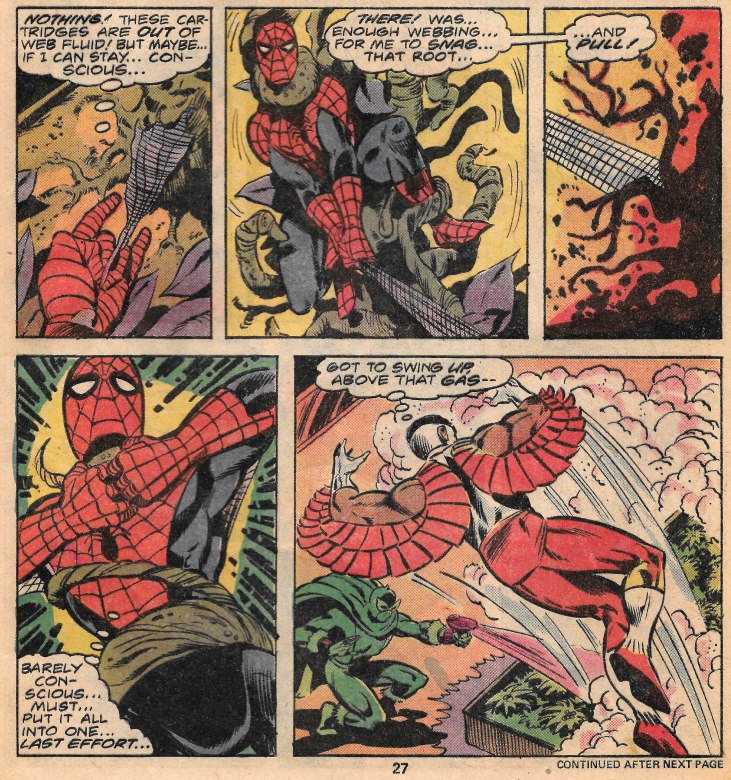 Also he wouldn’t fair too well against anyone, superhero or regular joe, in a normal setting. Even one with a lot of plants for him to control. “I have complete control of that ornamental holly! Now if you get close…er, can you scoot a bit closer, it can’t really move…yes, as I was saying it will now annoy you with its prickly leaves! Bwah-ha-ha!”

So give it all you got here, Planty! This is probably your swan song. 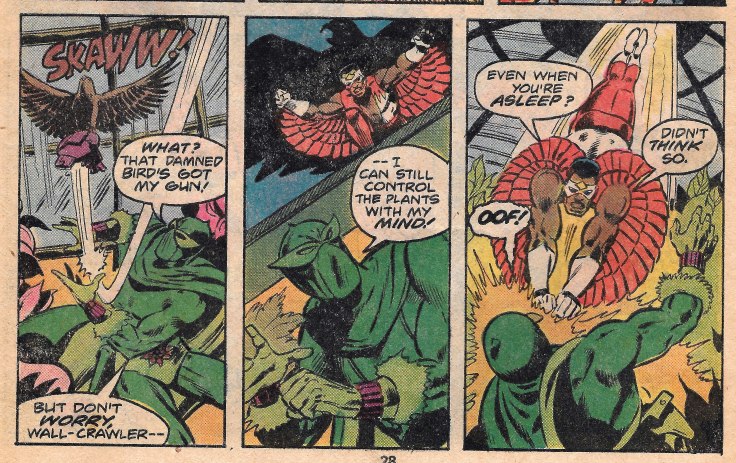 And to prove my point, Red Wing nabs his plant-control gun and Falcon double-punches him in the face. Nite-nite, Plantman.

With that, it is all over. The anti-toxin is secured, the Plantman and his minions captures, Spidey and Falc bond, and Steve is quickly back on the mend. 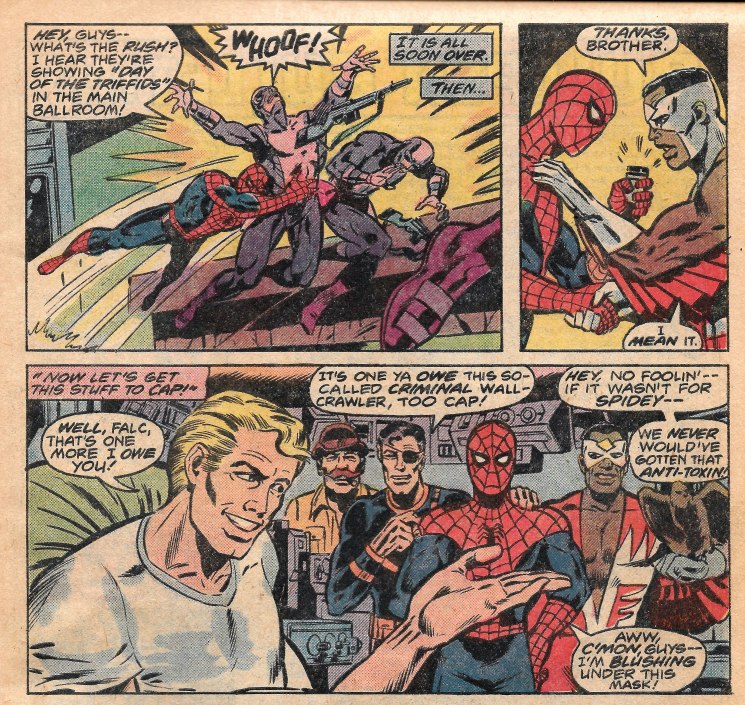 I always loved the Marvel Team-Up and Two-in-One titles. They usually provided fun moments of seeing an odd assortment of heroes paired up with Spidey/Thing. I’ll admit to never having heard of either the penciler or the writer of this book before, but I feel they did a decent job of entertaining.

As for villains like Plantman? Clearly he was somewhat of a knock-off of Batman’s Poison Ivy, just in a much less attractive package. He barely ranks as a C-list villain, yet there he is as part of Spider-Man’s rogues gallery. Bet he won’t be the last odd-ball villain the Spider-Man section of the Crapbox throws my way.

Only time will tell…
Posted by SonOfCthulhu at 3:33 AM