Some random Wonder Woman books, Finale!
Proving sexism can be fun! (well, it was the 70's) 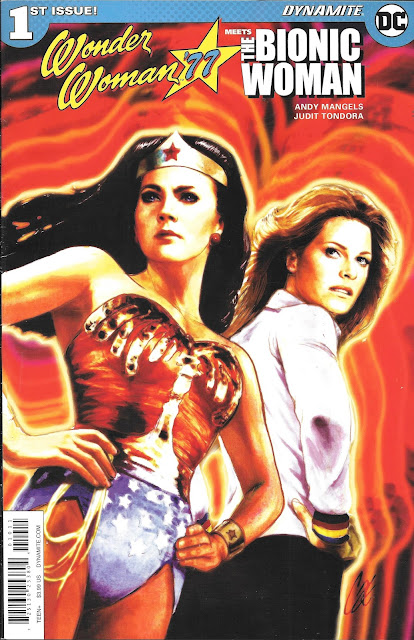 Two of my favorite TV Shows in one comic

As if DC and Dynamite could read my mind, there it sat on the shelf at my local comic book shop. How better to end my run of Wonder Woman books than to harken back to my childhood and the two of its most popular heroines. Only thing better would be to throw in ISIS and load the bases for a triple play.

Lynda Carter will always be Wonder Woman to me. She is an amazing lady and still active in politics and JUST as beautiful as she was when she starred as the Amazon princess. She recently attended the new Wonder Woman premier with Gal Godat andhad a few things to say about her legacy as the character.

As for The Bionic Woman, I followed everything Six Million Dollar Man related. Loved her series, thought she had better villains than he did. It didn't hurt that Lindsay Wagner made her so crushable, either.

A pairing of these two was never attempted, possibly due to the company licensing issues. It should have been tried however, because this book is extremely entertaining.

Compared to the prior Wonder Woman '77 team-up book, this title has upgraded art and colors, which really bring both ladies to life. We begin with side-by-side brief intros to our two principal  heroes. 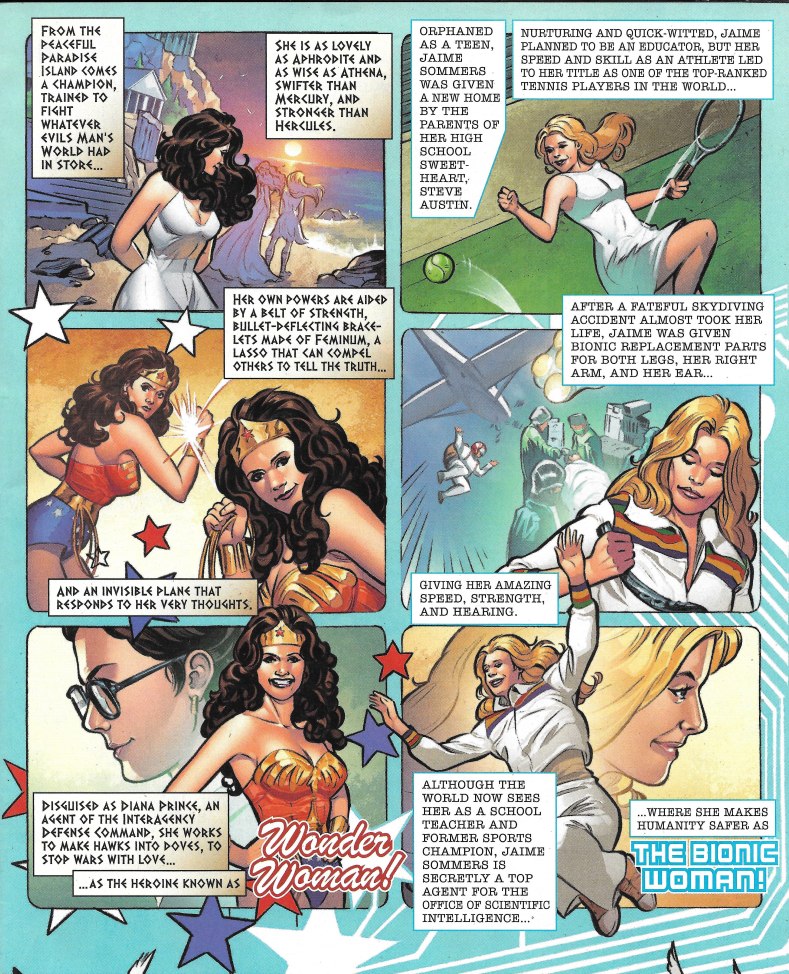 …and then we jump right into the action as a government building is bombed, causing Diana Prince to swirl into action as Wonder Woman. 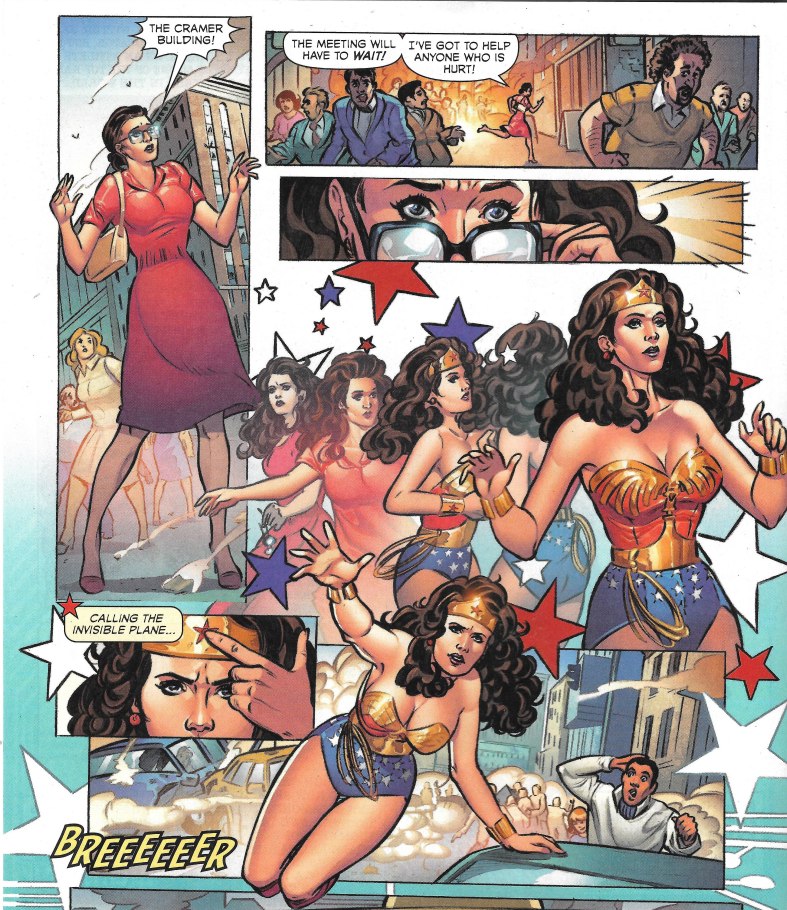 …just as a cab pulls up delivering Jamie Sommers to that very same meeting. A meeting that will have two ladies arriving just a bit late as both appear to have their hands full. 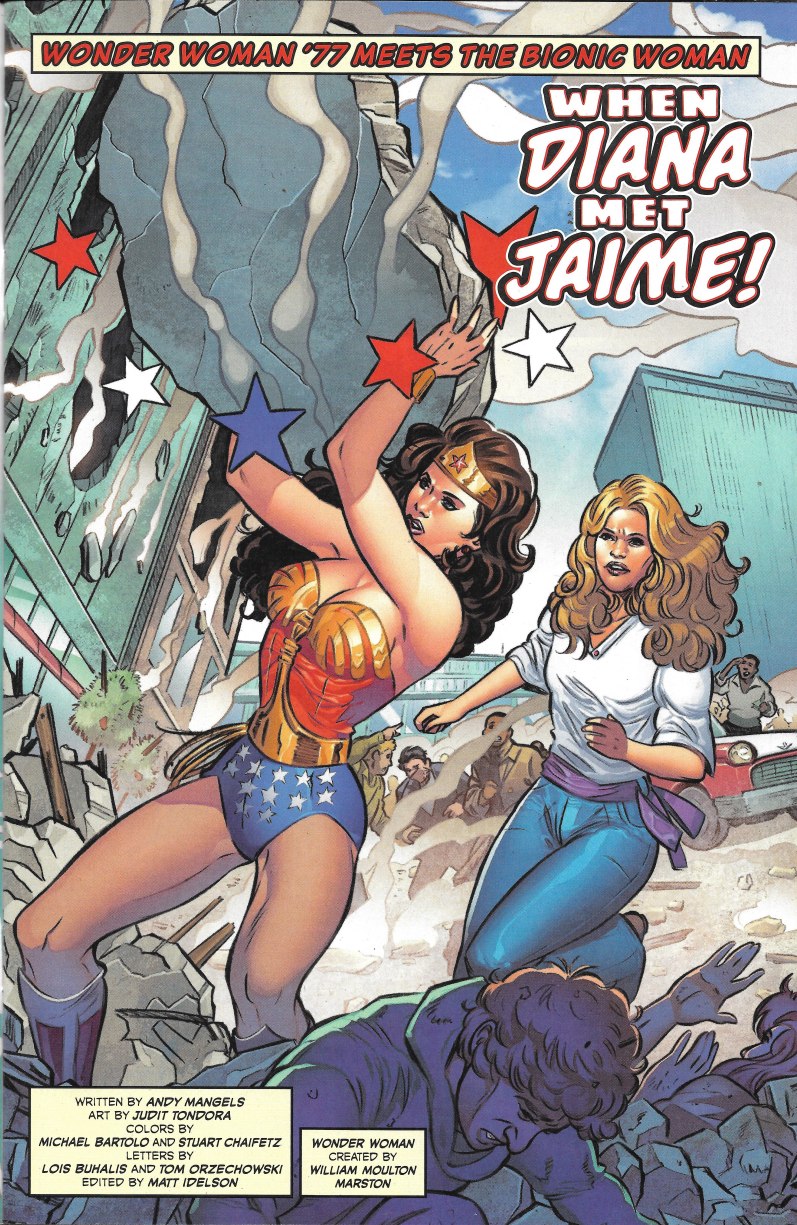 The girls share a moment of mutual admiration before moving on to the important tasks at hand. 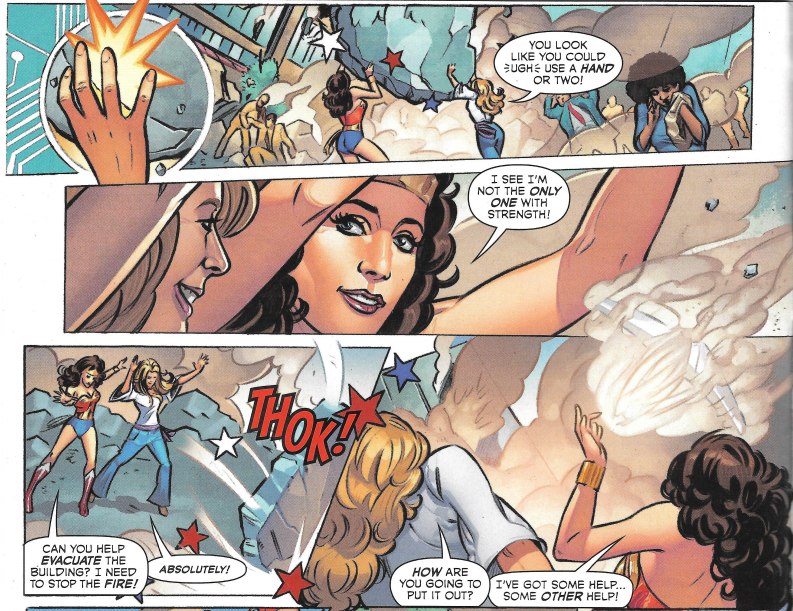 Those being 1.) rescue trapped survivors and 2.) extinguish the blaze before it endangers others. Luckily they know how to split up responsibilities and work as a team. 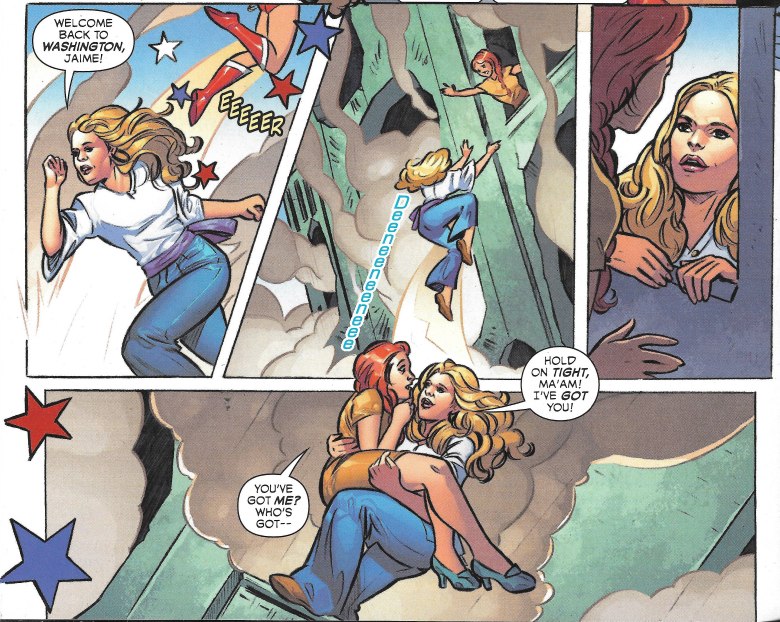 Jamie takes to getting people to safety. Two things I love here: first, the sound effects, so important in the television show, are present and accounted for. With the current state of affordable CGI, today's audiences cannot appreciate what had to pass for special effects in the low budget TV realm of the late 1970's. A sound effect and camera angles were what we had in most cases. Secondly, that line about "You've got me? Who's got you?" is directly out of Superman: The Motion Picture and don't think we don't get the homage.

Thank you, WW77mTBW. You made this old dog smile. 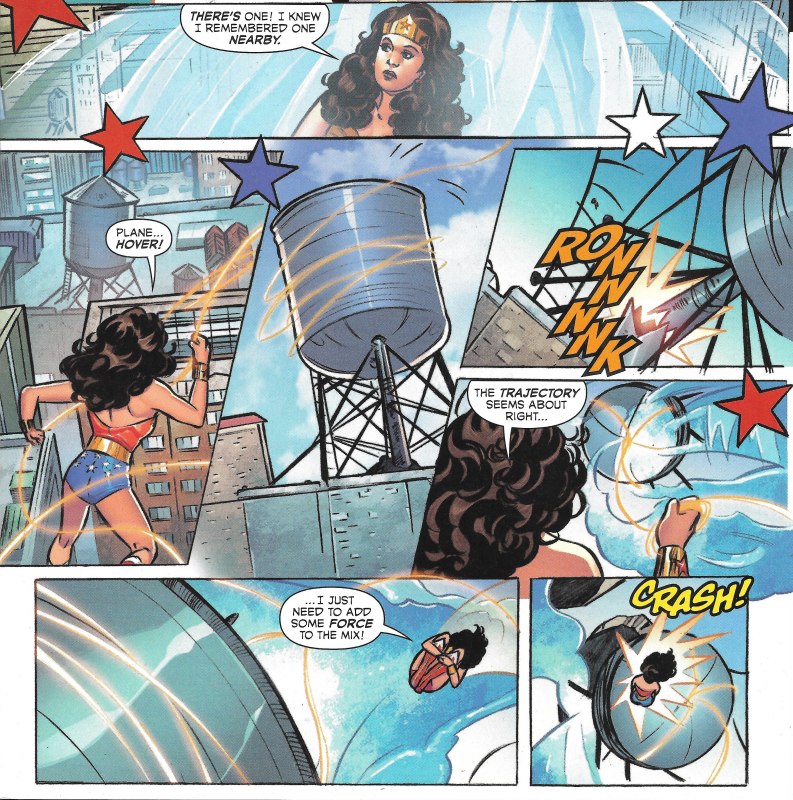 Meanwhile Diana uses her Invisible Jet (kinda like that she can fly now, but I miss that jet sometimes), golden lasso and amazing Amazon strength to douse the flames in water from a nearby tower, ending the danger. Love this sequence. 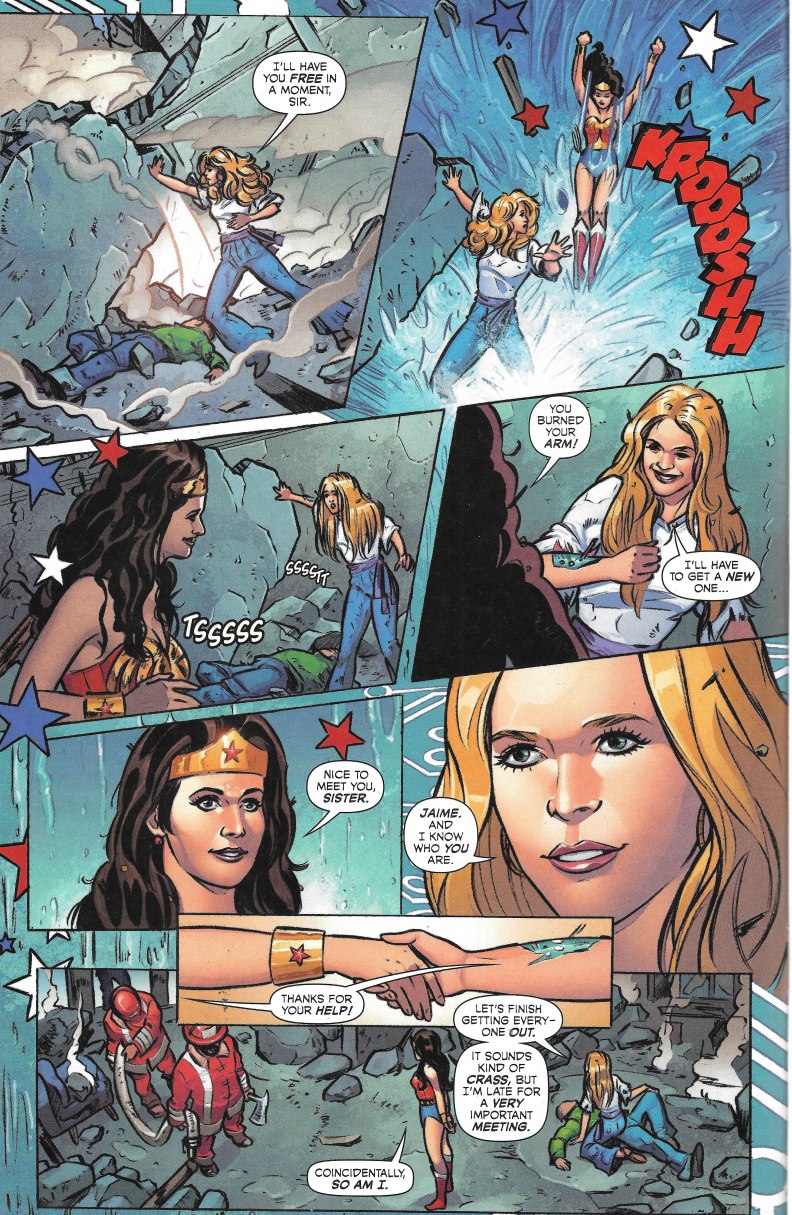 With the danger passed, we get a proper, formal introduction of our two title characters. All smiles over here and hope you following along at home are smiling too. Such cheesy goodness should make everyone's day.

And if that doesn't stoke your fire, check out this part where both ladies catch their meeting at the Inter-Agency Defense Headquarters just a bit later and the thing that never happens in these kinds of stories, happens. 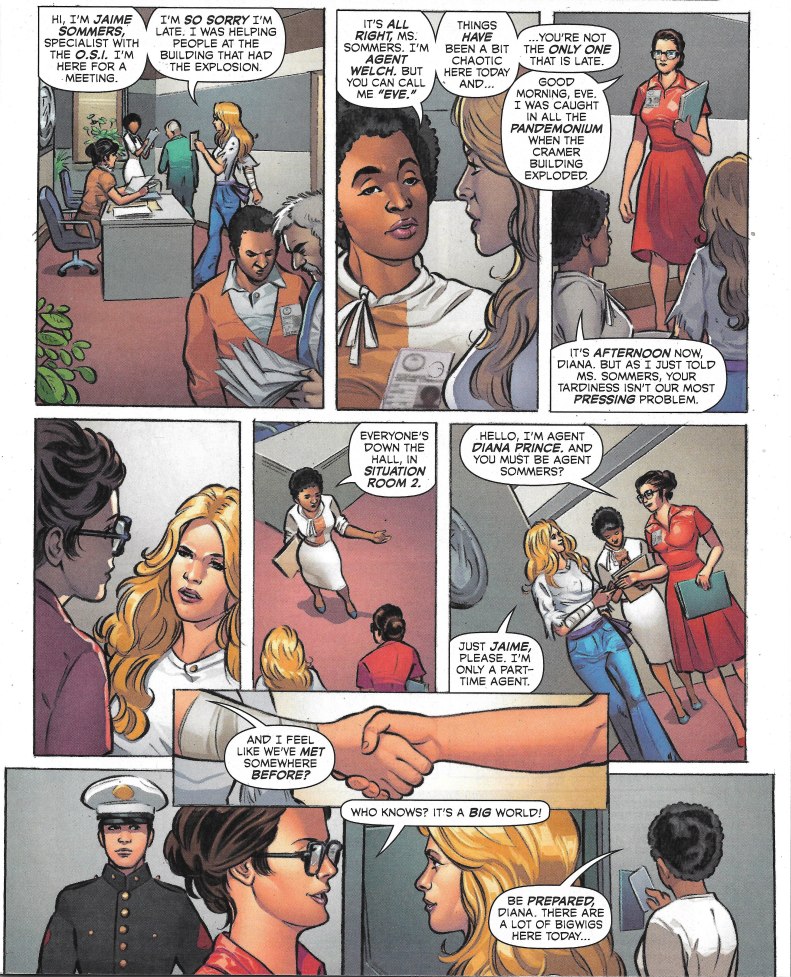 Yup, they both know that Diana's secret identity is Wonder Woman. Neat stuff that makes certain that we understand there is a lot of intelligence at play here. Jamie is no slouch and Diana senses a kindred spirit. Cool twist on a stale formula.

Before our meeting can begin, we have to deal with Mr. Sexist here, which gives the issue a taste of the flavor of how women were viewed in the '70's. I hope he gets crushed by debris later. 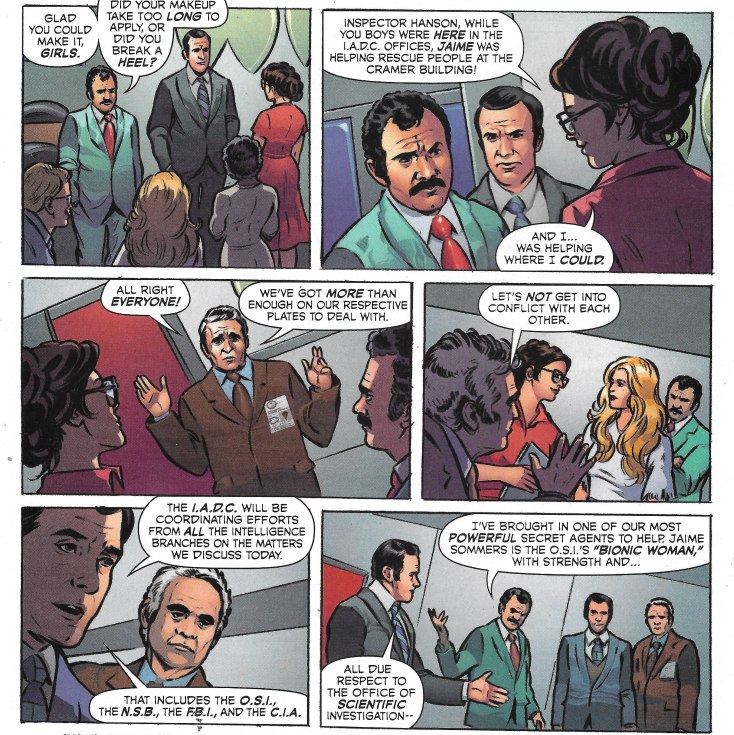 Jamie and Diana get their marching orders. Appears that a hitman dispatched by a new para-military cabal known as "Castra" will be making an attempt on Dr. Niyol Tahy. The pair are under orders to save him.

Steve Trevor drops in to give the duo his best wishes… 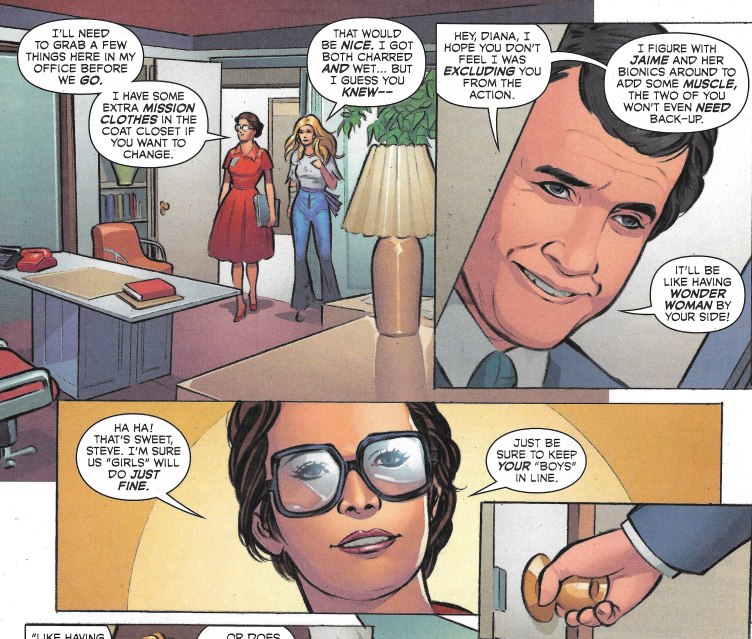 …which leads to this amazing conversation that seems to imply how dense males are and I'm totally in love with the way Diana acts coy here. 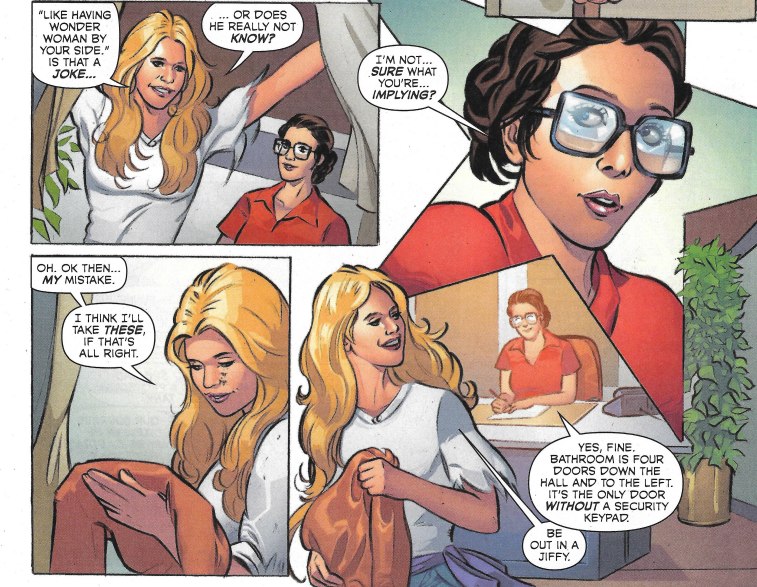 As they race to Dr. Yahy's office, something appears amiss… 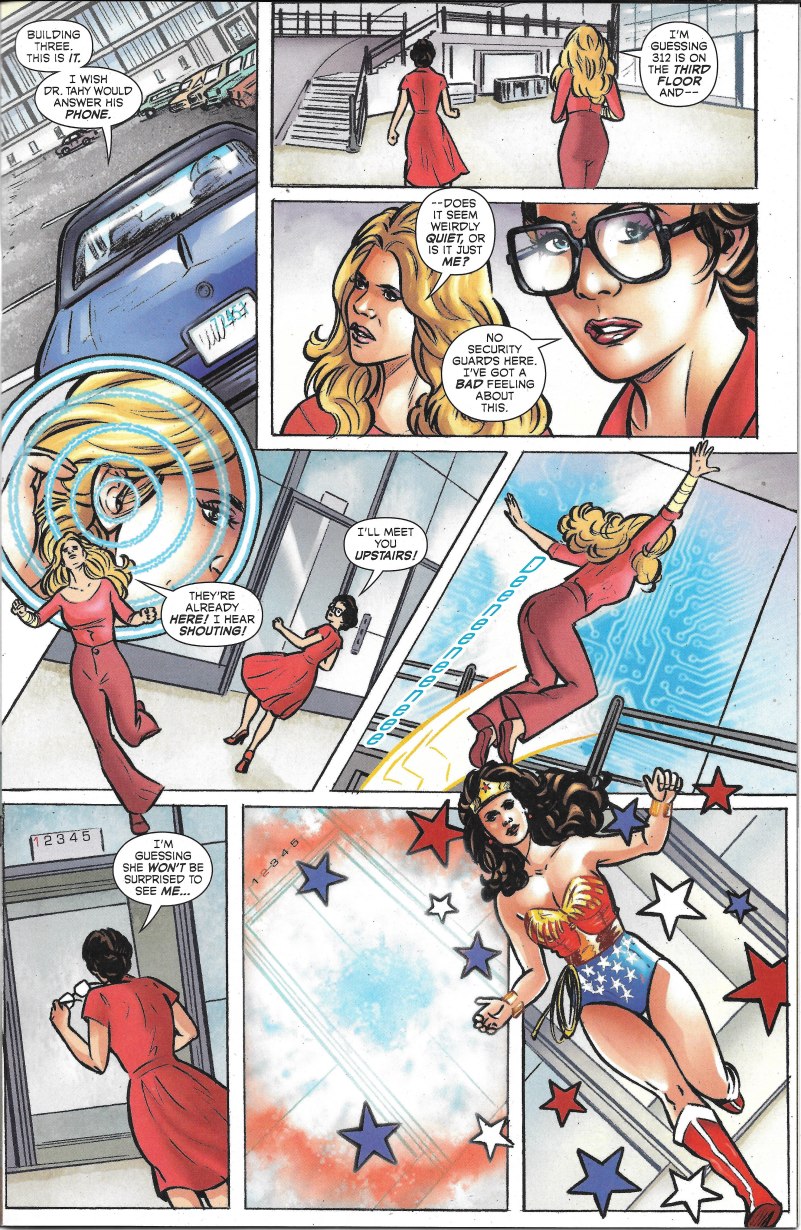 …leading to them springing into action. Love the use of color on Diana. 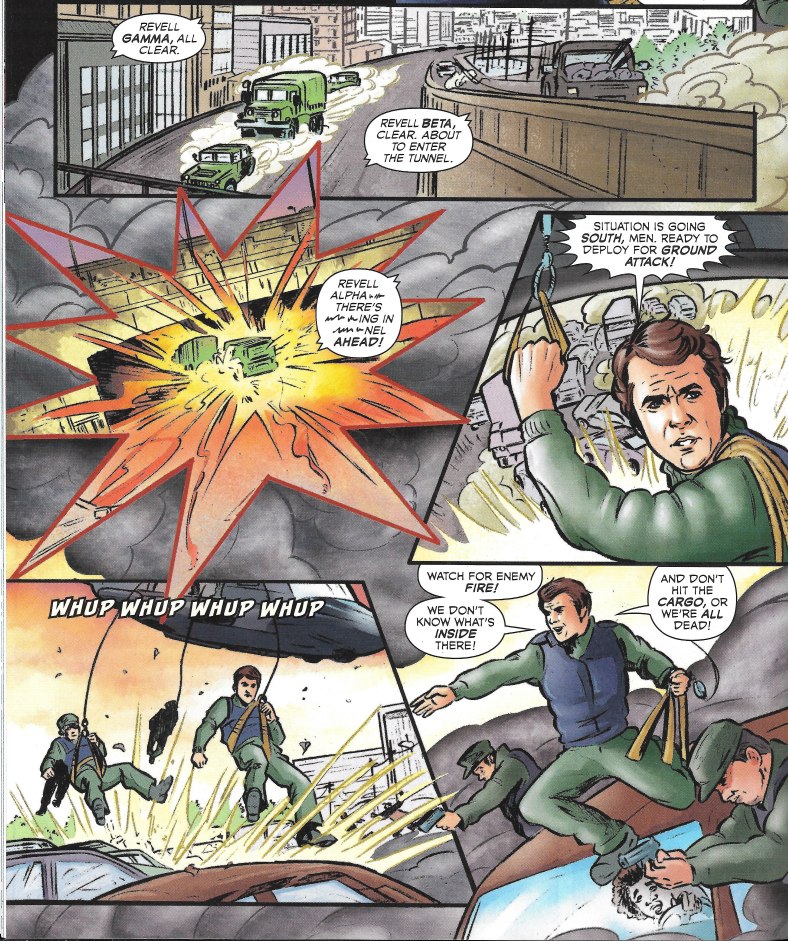 Steve runs into a bit of trouble transporting…I don't know what this convoy is transporting. I have to say while the dialogue from our leads is great, the plot here is a bit confusing. This is some "key defensive…something" that as Steve mentions below, might be explode-able or poisonous? Something anyway. 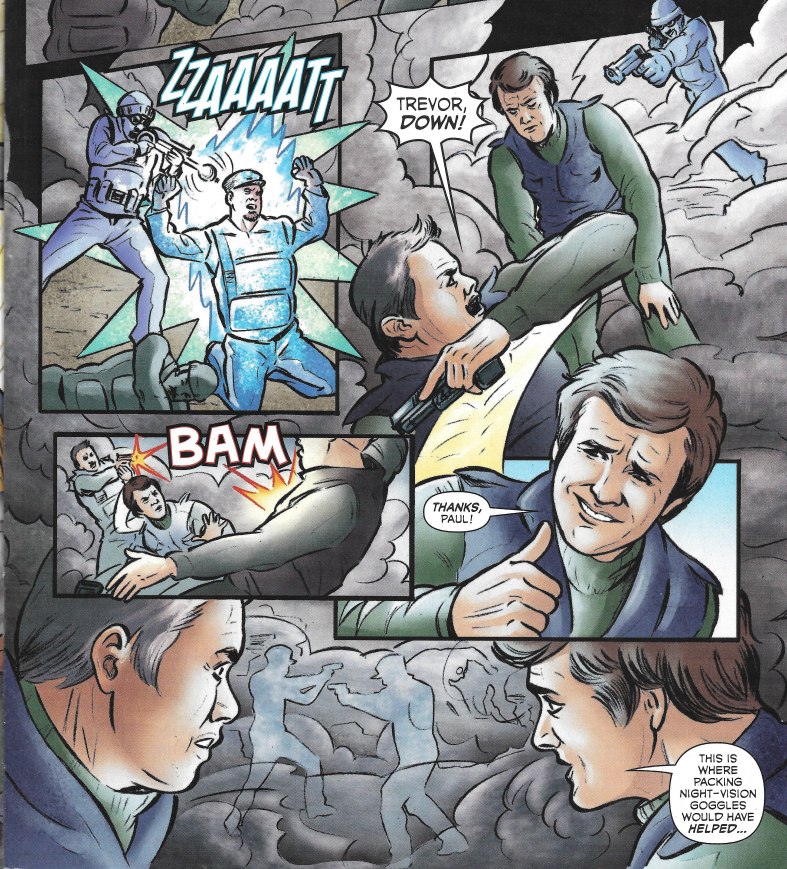 His life is narrowly saved by Paul. I don't know who Paul is. If he was from third season Wonder Woman, I'm not sure. Or an extra from The Bionic Woman. I think neither. But who can tell, as 1977 was a long, long time ago.

Looks like things are about to get bad at IDAC headquarters too. These gents are about to use green knockout gas to take out the building staff. 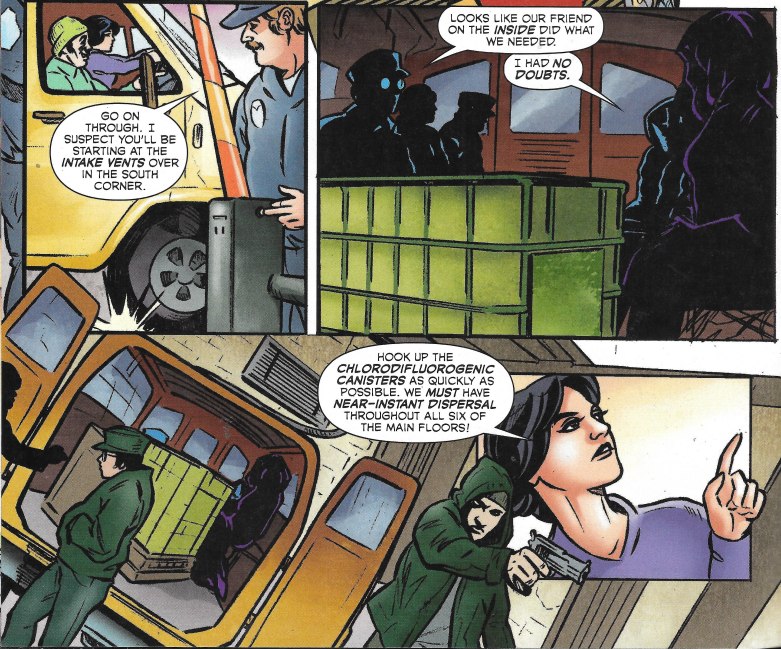 Which begs the question as to why knockout gas is always green?

Not to worry though as Agent Welch, a/k/a "Eve", realizes the danger and puts on a gas mask so she can kick some butt. 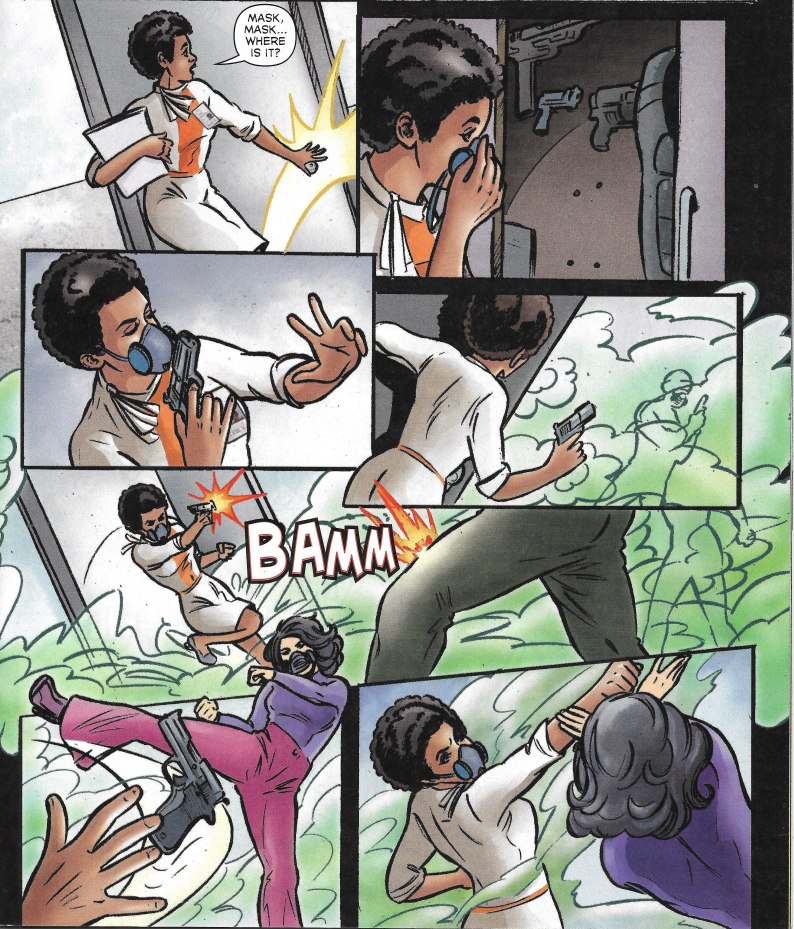 Sadly, she's taken out by this unknown bad woman operative. 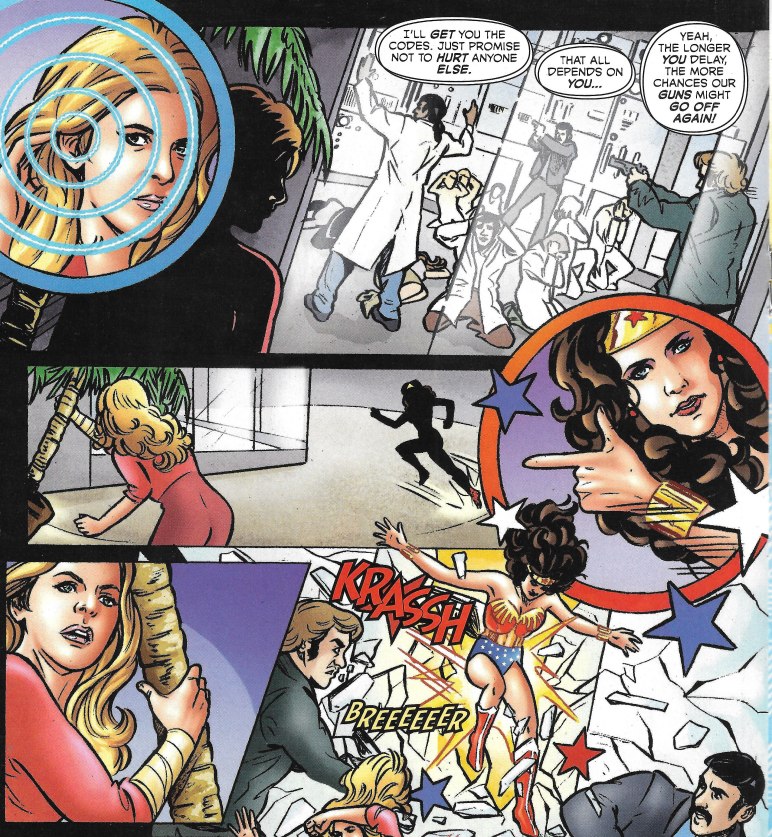 Meanwhile, Diana and Jamie surprise three thugs who are holding the scientists hostage. Wonder Woman, leaping through a window and Jamie using a potted rubber tree plant to smash her way in.

While Diana does her bracelet thing, Jamie takes down two of the crooks. Then Diana adds her tiara throwing and lasso to the mix and these guys never had a chance. 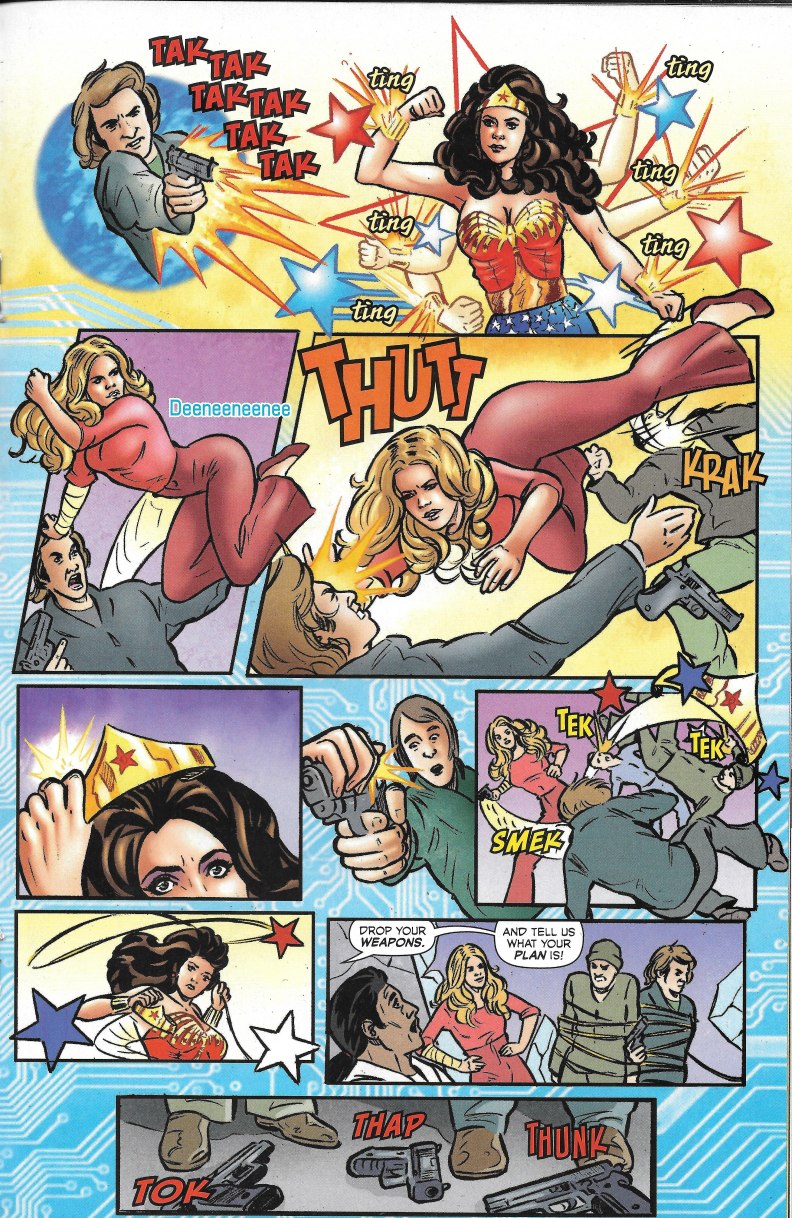 I love the over-the-top vibrant color pallet being used here. It gives it that real "disco is alive" '70's vibe to everything. And I have to state the backgrounds being a blend of Wonder Woman's "colored stars" or Jamie's "printed circuit boards" adds a nice touch to this book. I forgive a lot of the story confusion and just go with the action and vibe they are giving off. Sort of like how we used to when watching these TV shows. 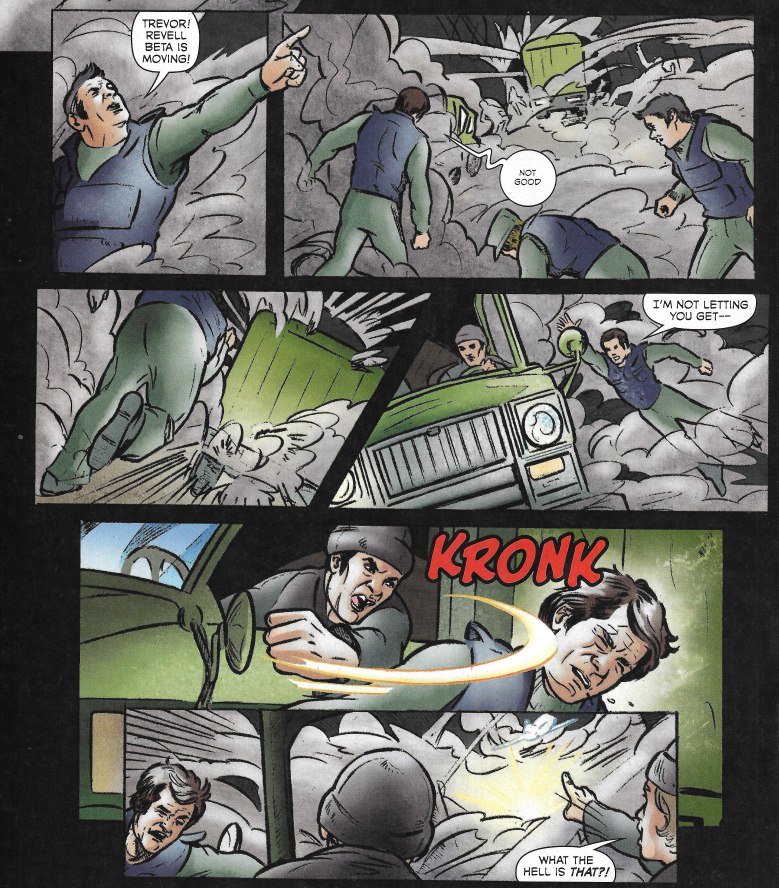 Back to Steve though, because his truck drives off and he can't stop the man doing the driving. 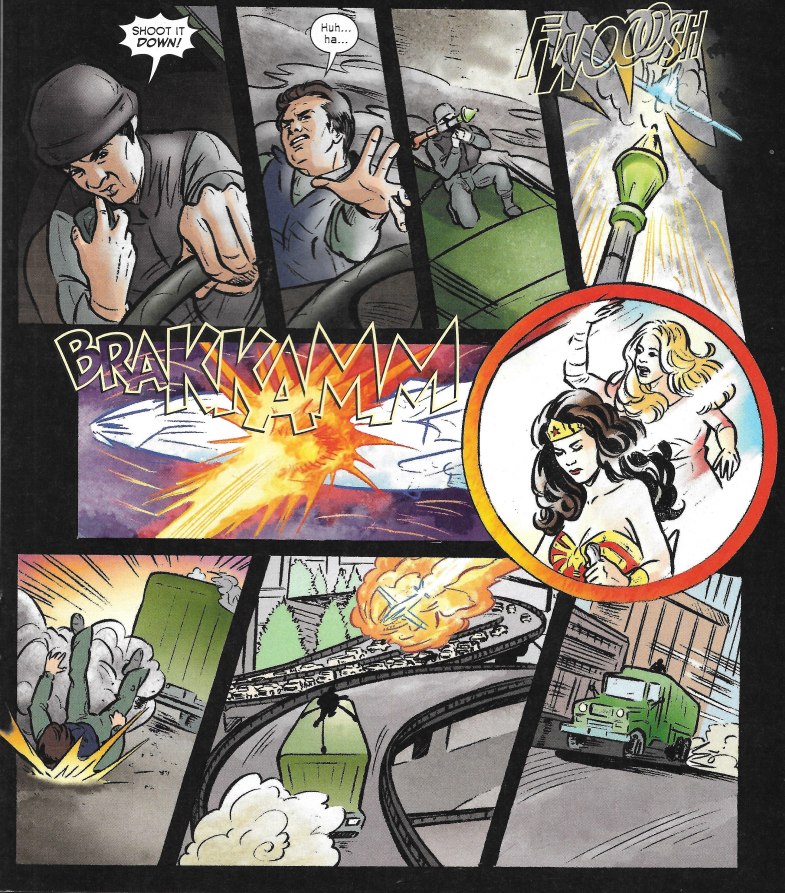 Lucky for him, Wonder Woman is mentally controlling her invisible jet to help take down the spys.

Unfortunately our heroes can't be in three places at once, meaning that this metal legged shadowy figure menaces Joe Atkinson and this little robot piece of junk that I half-remember but can't for the life of me recall what its name is. 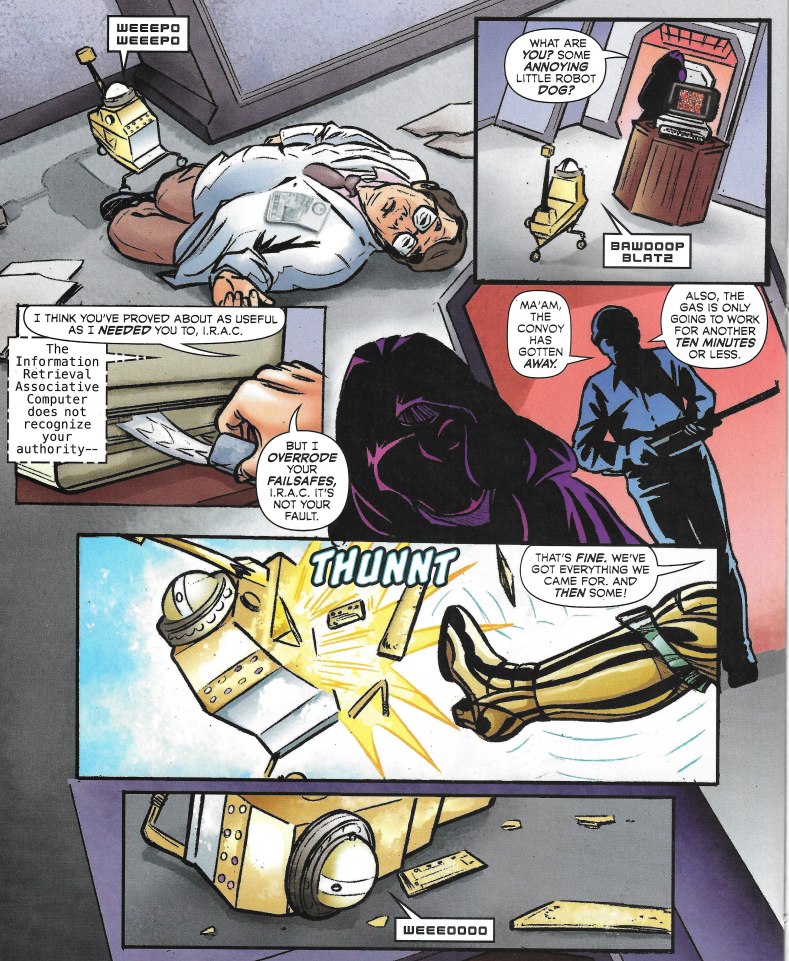 And a half an hour of googling later (I know, right! Sometimes you just can't let go of a question.)…this 'lil guy was Rover, an extension of the IRAC computer from the Wonder Woman series. So. Long. Ago.

Moving on from people being mean to technology… 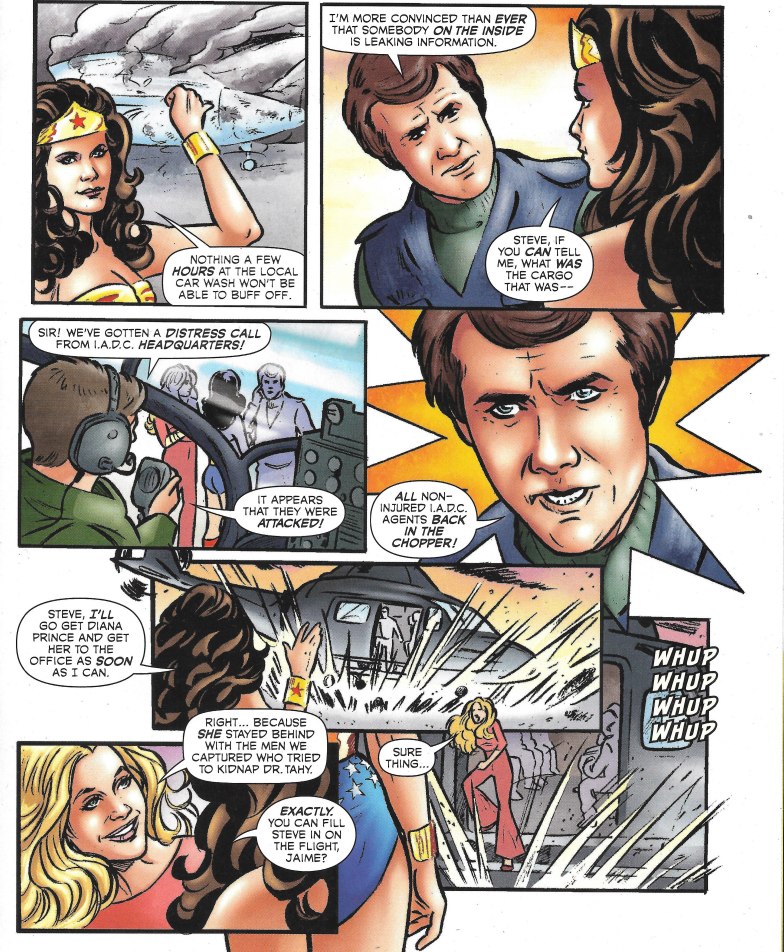 Our heroes regroup and it becomes very clear that all of this was timed out to the "T", meaning the true motives behind all of this is still a mystery. And while they did get away with the truck, they were foiled in stealing the scientists.

Love how Jamie helps cover for Diana here, as everyone rushes back to I.A.D.C. 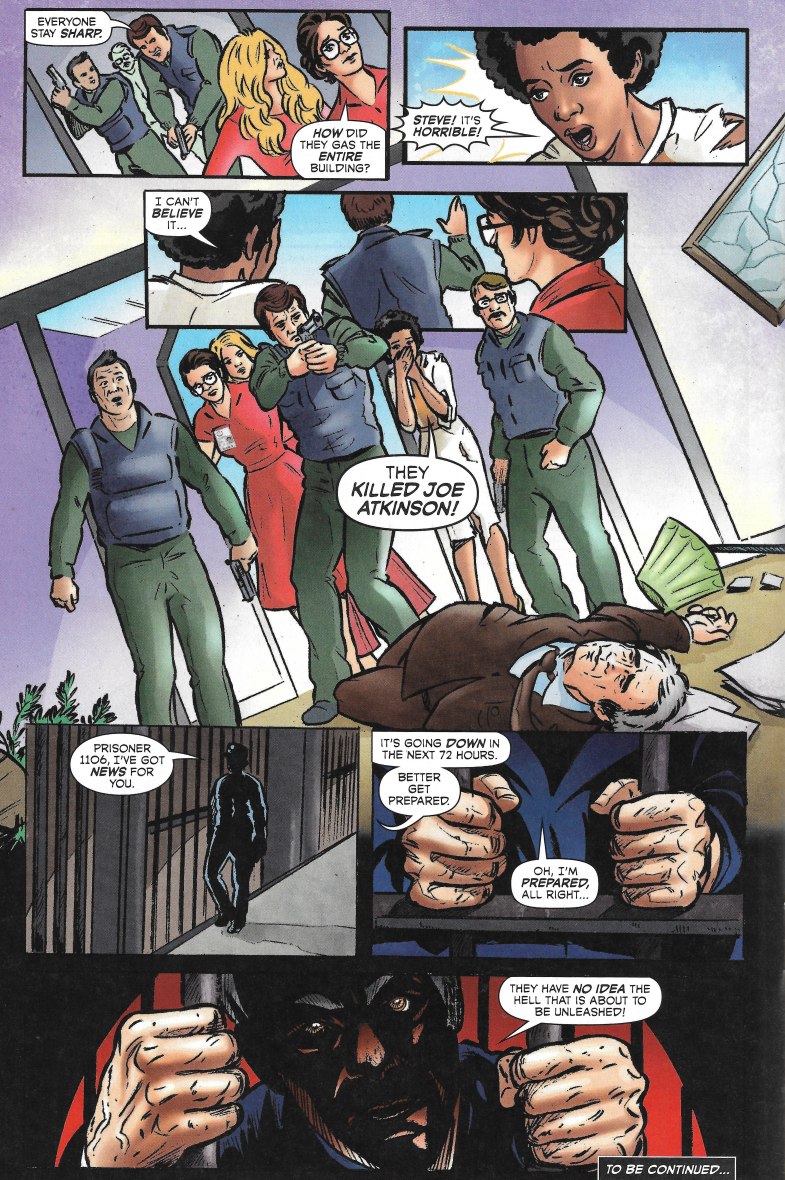 …only to find the place in shambles and Joe Atkinson dead. Again with the honesty: no idea who Joe Atkinson is or why he is important. Nor do I know who our figure covered in shadow at the bottom is either.

Well done issue, even if it serves to point out how little I remember of my Wonder Woman and Six Million Dollar Man/Bionic Woman days. That was several DECADES ago. I do remember when TV had stations that would run re-runs of the shows, but seems nowadays you have to pick up the DVD packages or have a subscription to every streaming vendor to find the exact show you are looking for. One thing the issue did do for me was awake a hankering to do just that. Maybe with a bowl of popcorn so I can enjoy the old-fashioned goodness of them.

That's it for my Wonder Woman coverage for now. There are a handful of Wonder Woman books left in the Crapbox, so you might see her pop up from time-to-time. On Monday, we begin our coverage of the "next big thing" as the Crapbox takes a look back at what Spider-man books have wandered my way in anticipation of Spider-Man Homecoming. While I'm sure others will have covered these books already, we will try to put our own unique spin on them.

Until Monday, then and have a great weekend, everybody.
Posted by SonOfCthulhu at 4:01 AM