Some random Wonder Woman books, Part 12
My granddaughter knows her as "wubber-woman" and that's fine by me 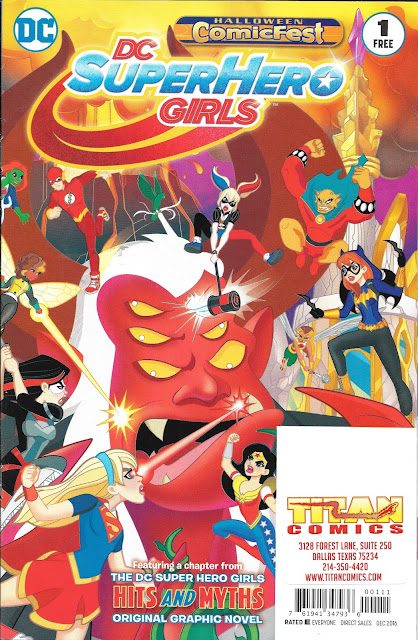 If there is anything that shows the growing power of female fandom, it is the rise of female-themed superhero merchandising.

Once a demographic group with purchasing power is shown to not have products geared specifically toward them, it isn't long until a rush of products appear to fill those wants. Marketing abhors a vacuum.

Thus it is with this toy/animated series line put out by DC comics. With Batgirl and Gotham Academy doing so well with teenage girls, the publishing giant realized there was a missed opportunity in marketing their products to younger girls. While I'm normally a bit on the fence about creating marketing need overriding good storytelling, in this case I'm siding with DC.

I mean the Transformers and G.I. Joe toys haven't exactly rotted little boy's minds. In fact they have done much the opposite when it comes to spurring on good spin offs and also-rans, specifically in the comics realm.

Plus I'm pretty sure I want strong positive role models for the next generation of females. I believe in equality of the sexes and that extends to them having awesome childhoods of dreaming of being Wonder Woman or Batgirl or any number of superheroines. The same way I did as a child. About being a superhero, I mean.

And so far the line appears to be a pretty big success. The animated TV show has gone through three seasons and a TV movie. There are toys out by both Mattel and Lego. They have oversized Little Golden books and coloring/activity pads. The images of Wonder Woman from DC SuperHero Girls are being used on little girl's apparel which also works to cross promote her big screen debut. And of course there are several all-ages comic books, such as this giveaway from Halloween 2016.

Not to mention that the person chosen to precede Greg Rucka on her Rebirth title will be the writer of this very book. Hopefully we will see a little more mature take on the bracelets wielding heroine. But as far as what is going on here, it is fine for that level of fluff.

I am tempted to warn you of the changes from DC's ongoing universe that these all-ages books have, but I think I should just throw you into the deep end alongside me. Here we go: 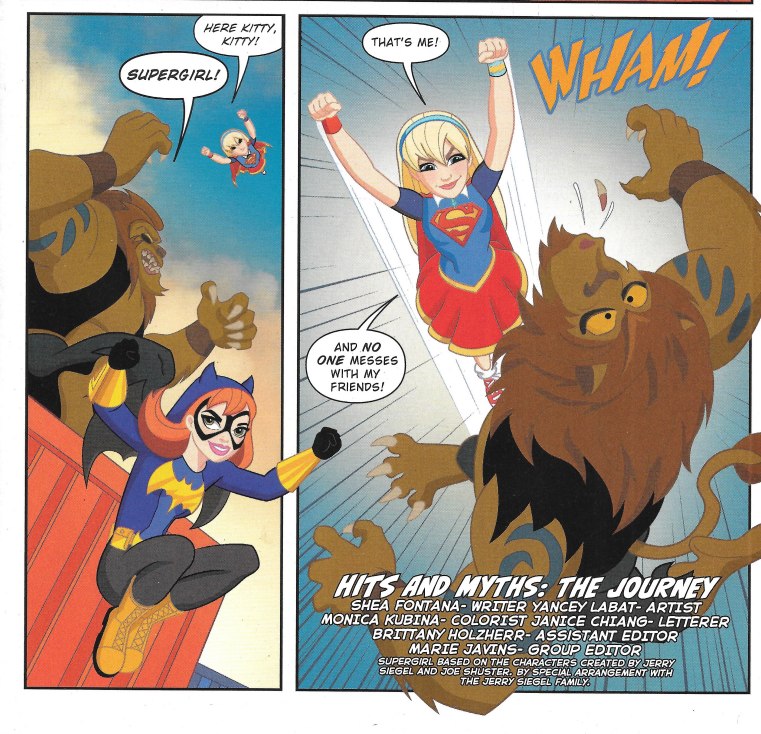 We begin with Batgirl being chased across shipping containers by a character who looks much like Beast from the Disney animated feature. Knowing that's mixing companies, I assume this must be someone else. She gets a handy assist from Supergirl.

While Wonder Woman plays clean-up, she asks the question on all our minds: who is this guy? 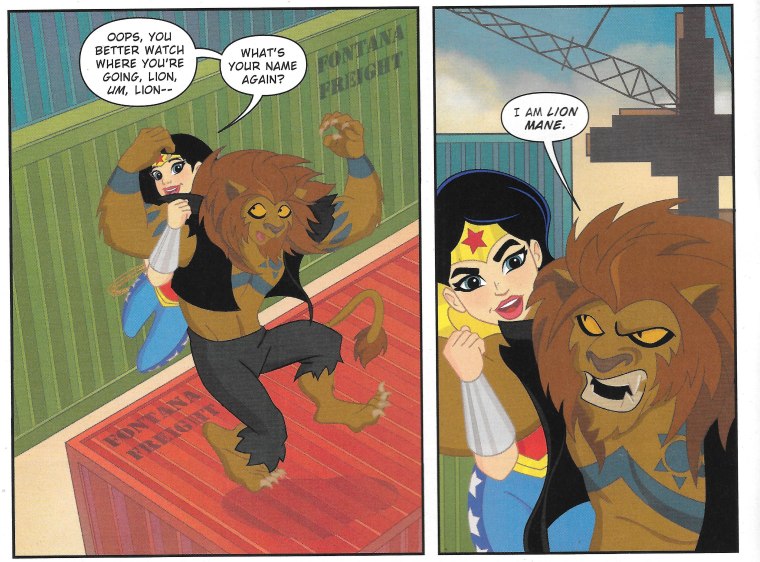 And with that Lion Mane drops a gas pellet which has these adolescent versions of the big name DC girls scrambling to get away. Afterwards, it appears he's made a clean (albeit smelly) getaway. 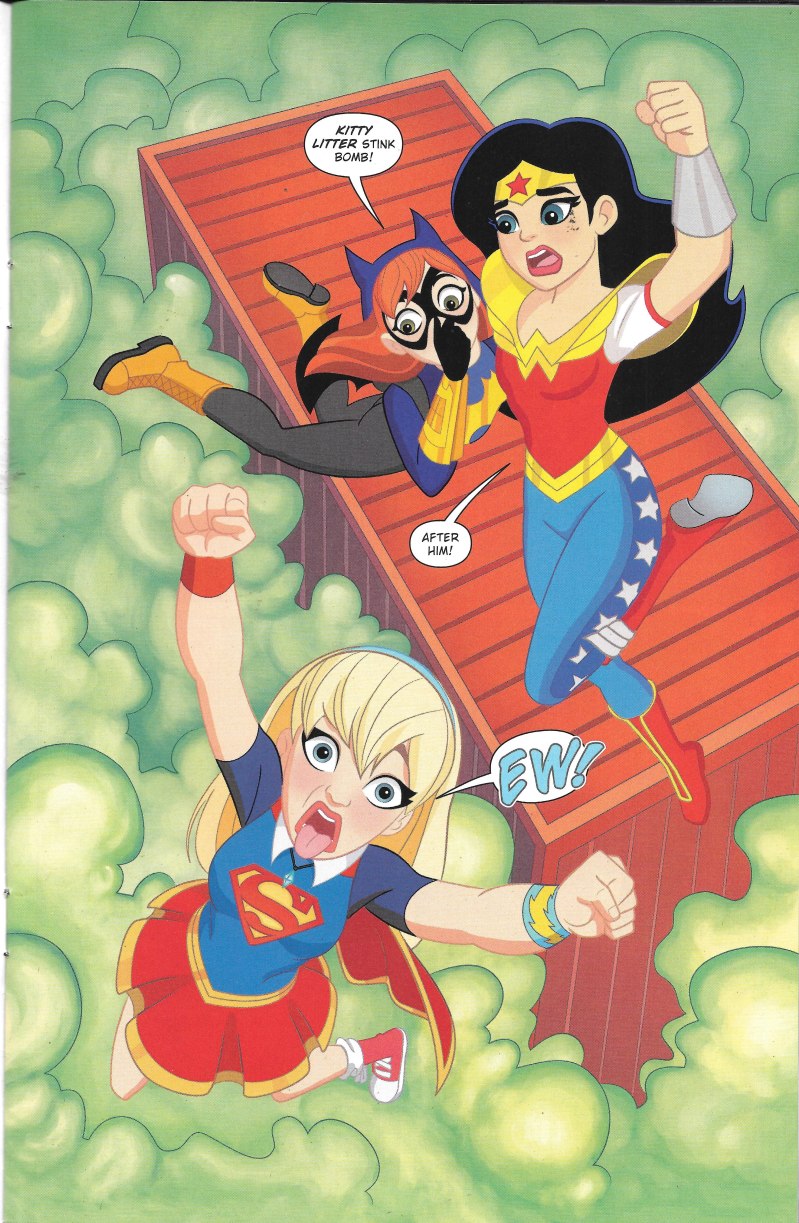 Or at least so he thinks… 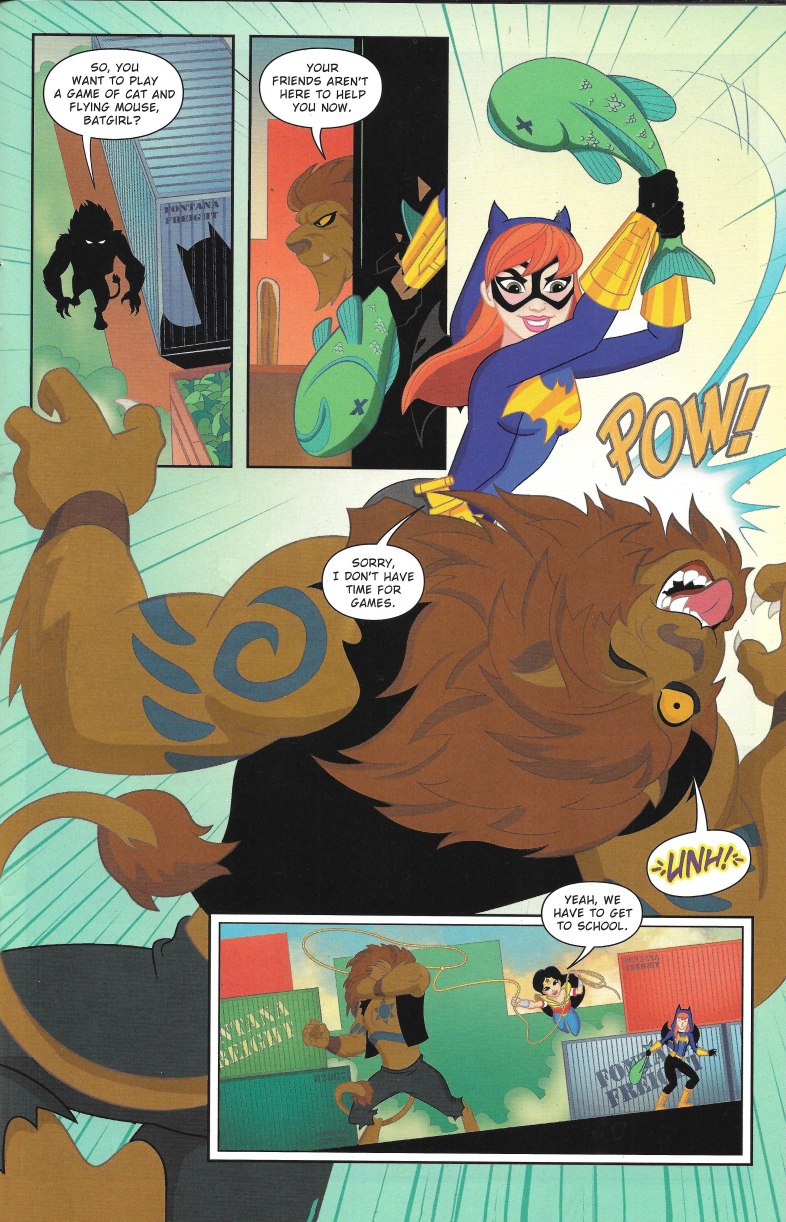 …Bab's fish slinging and Wondy's rope tossing lead to the Mane man sent up the river to do some hard time. 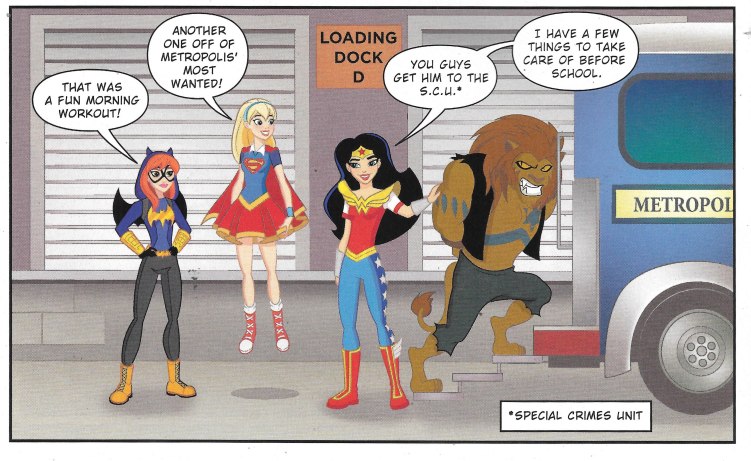 I think what I like most about the book is how much it reminds me of the Spidey Super Stories that Marvel used to put out, specifically in the reading level and action it shows. The appeal to a young reader is right where it needs to be. Not sure if Marvel has done anything of late to match those great starter books.

We get a great page of young Wonder-W. being heroic and being a girl as well. Puppies and cupcakes sound right up most four to ten year old's alley. 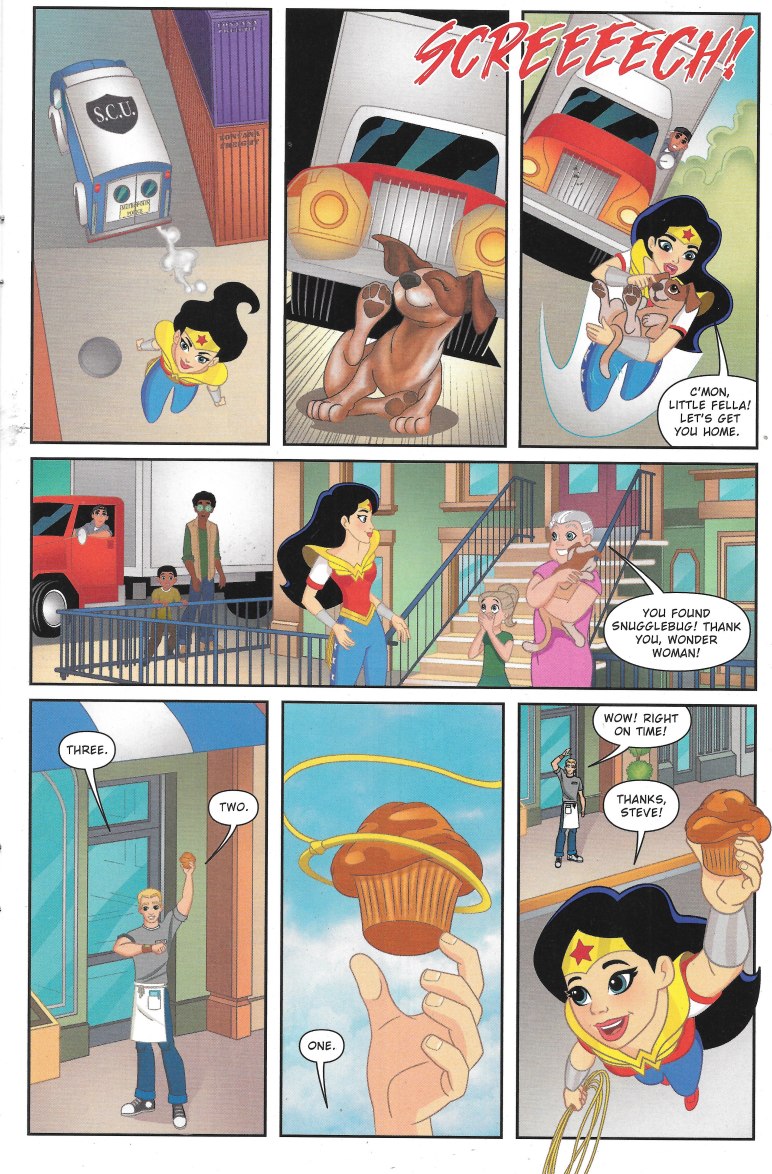 And what else is a young WW fan likely to enjoy reading about? Why how about slumber parties with supergirls and going to school? 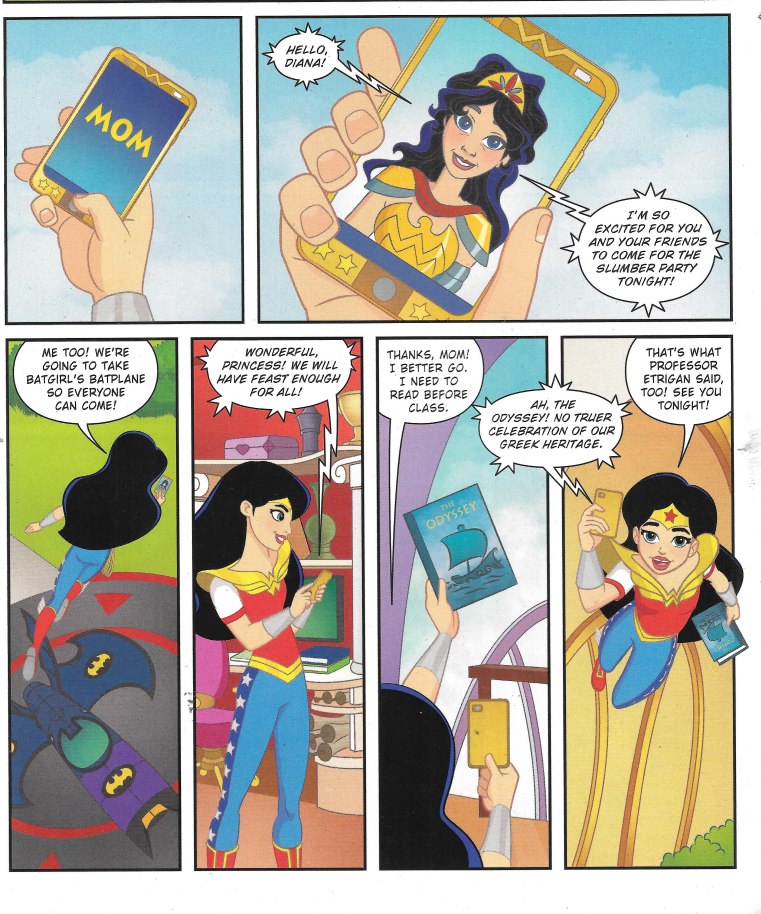 I'm digging the vibe the book puts out. I'd love to read this to my granddaughter, who is currently four. I believe she would love every page of this adventure. Growing up and going to school, having slumber parties, and rescuing animals…Yeah, pretty certain ANY girl would dig this.

Note that Etrigan, the rhyming demon of the DC Universe is her teacher. Who else might we bump into at this high school. 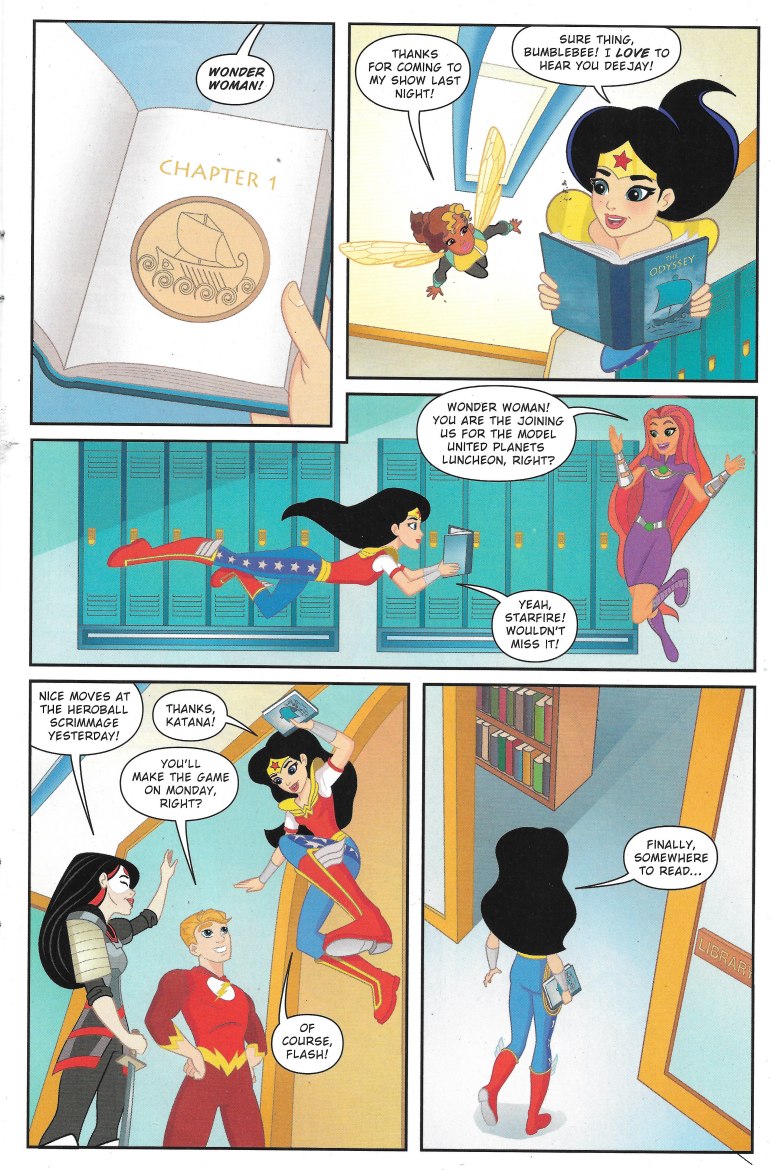 Sheesh. Everybody gets their own teen mini-me here. Looks like Wonder Woman is having a tremendously busy day too. Let's hope she doesn't… 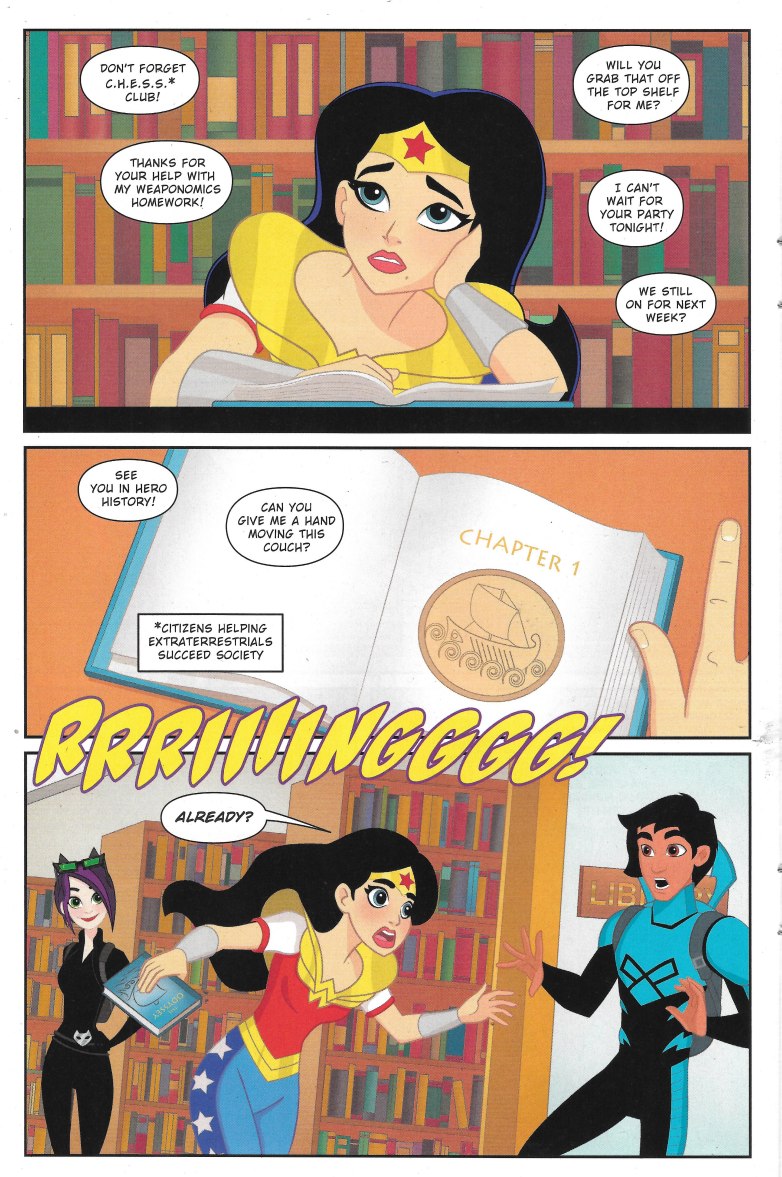 …space out instead of reading her assignment. Well, I'm sure it will all work out okay. I mean, certainly, her teacher is an actual demon and all, but how bad can it be? I guess not so bad, as Etrigan doesn't appear to be upset with her. He's ignoring her dozy glare while taking a question from Harley…
Wait! WHAT? Harley Quinn is right there in class with all these heroes. And Killer Frost! And Poison Ivy! Dude, seriously? WTH?

Yes, in the much more simplistic world of DC SuperHero Girls, the villains aren't so much evil as they are…not evil? Like at all. Maybe they pull a prank every once in a while, but generally they are just like the other girls.

There is something so Wonder Womany about that last statement that I might just have to fall in love with this book all over again.

Story-wise, Double W falls asleep in class and dreams of Etrigan's lecture, told in storybook pages featuring her friends in supporting roles. The story looks a bit like the Odyssey, which was probably mentioned when I was distracted by puppies or slumber parties. 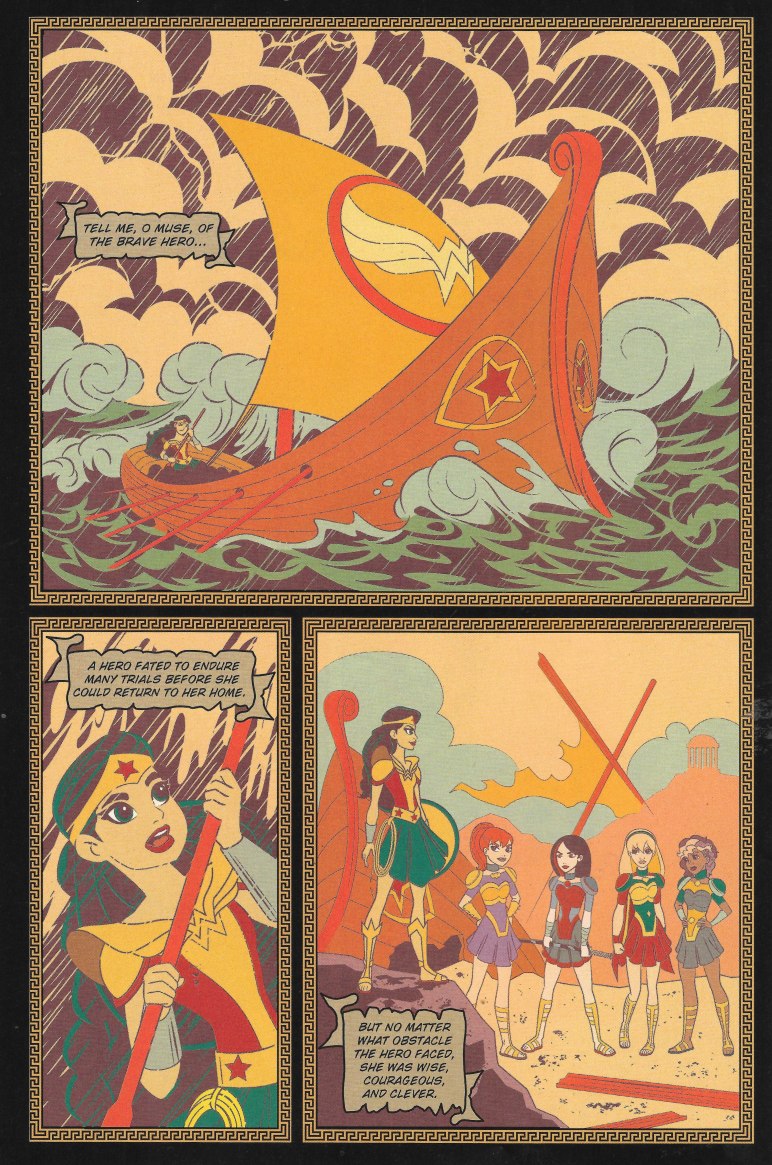 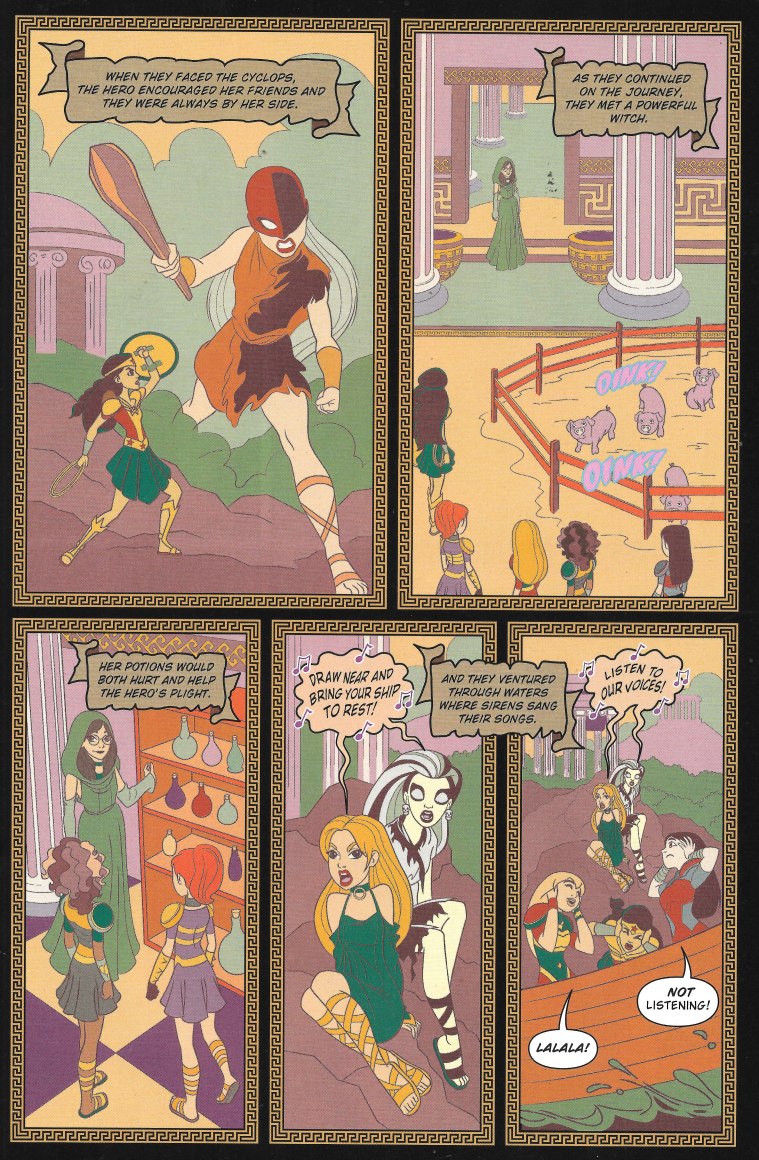 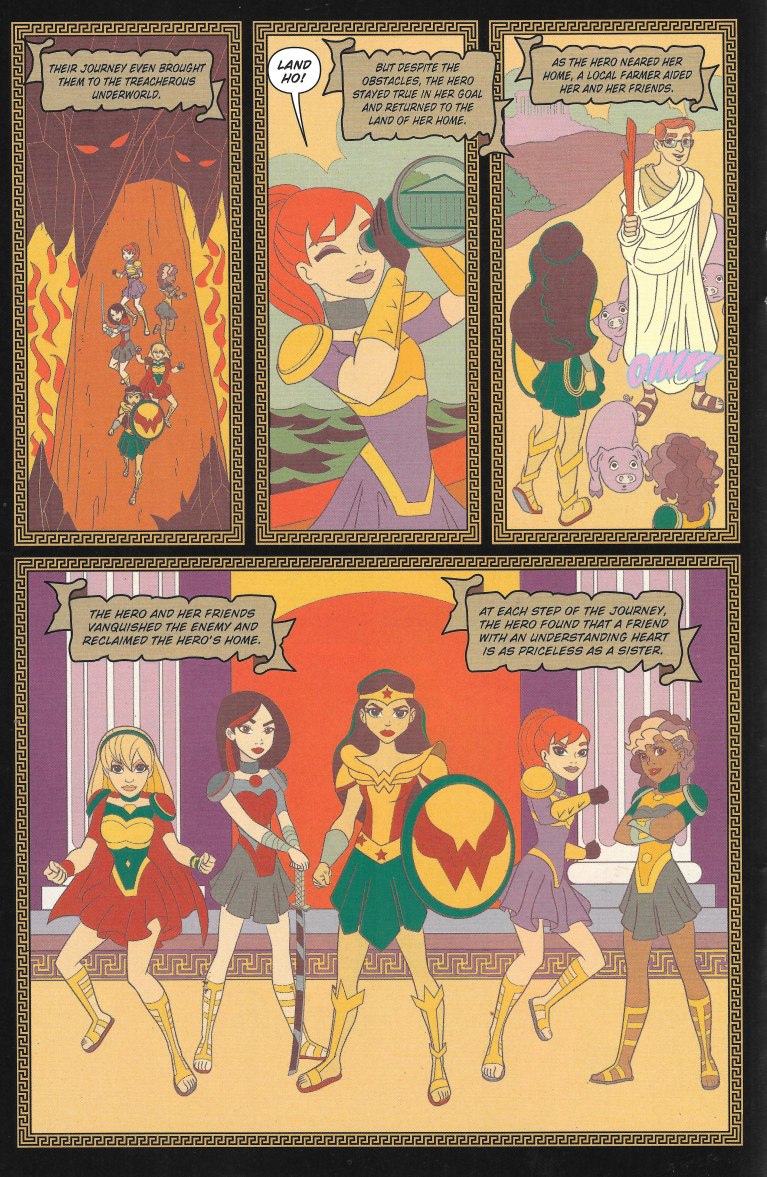 Unfortunately sleeping in class nets her the ire of Etrigan, but she's saved by the class bell… 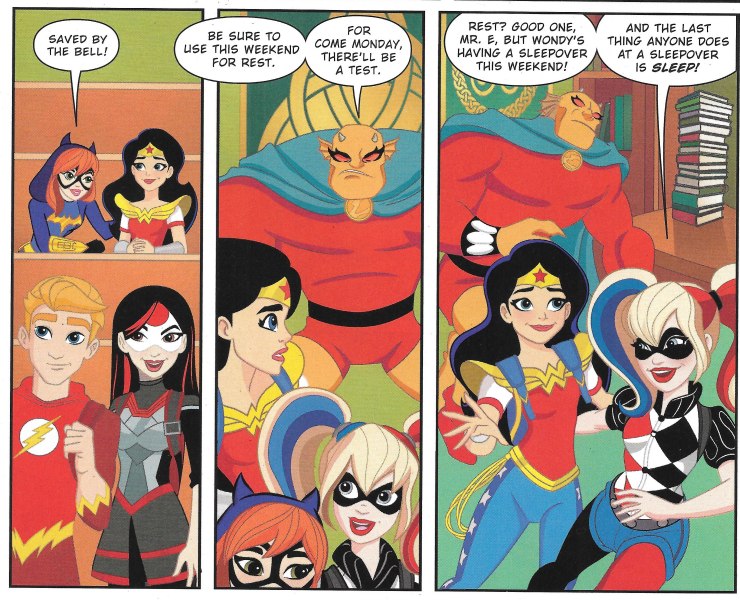 …and off the girls go for their weekend hanging out doing nails, hair, and facials fun… …except when they get there, the Batplane is nowhere to be found. 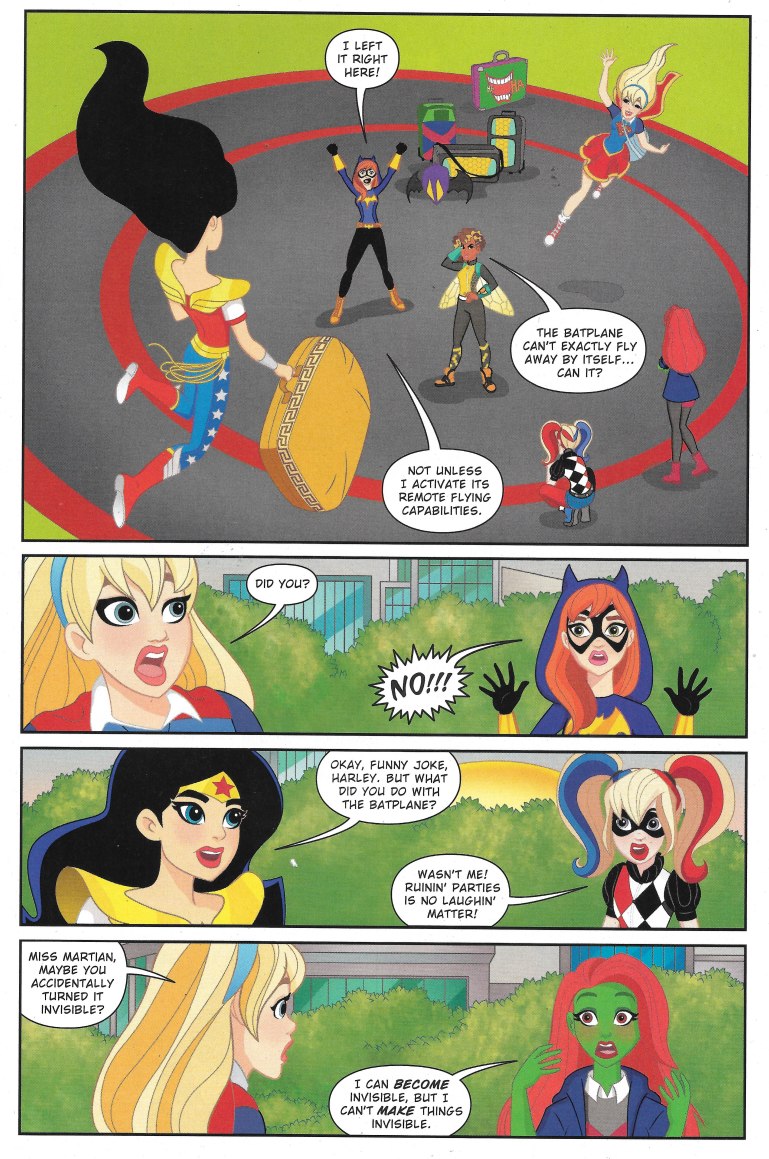 After a quick round of "Did you do it?" they split up into pairs to look for the missing jet, just like in the old JLA team book. Some things never change. 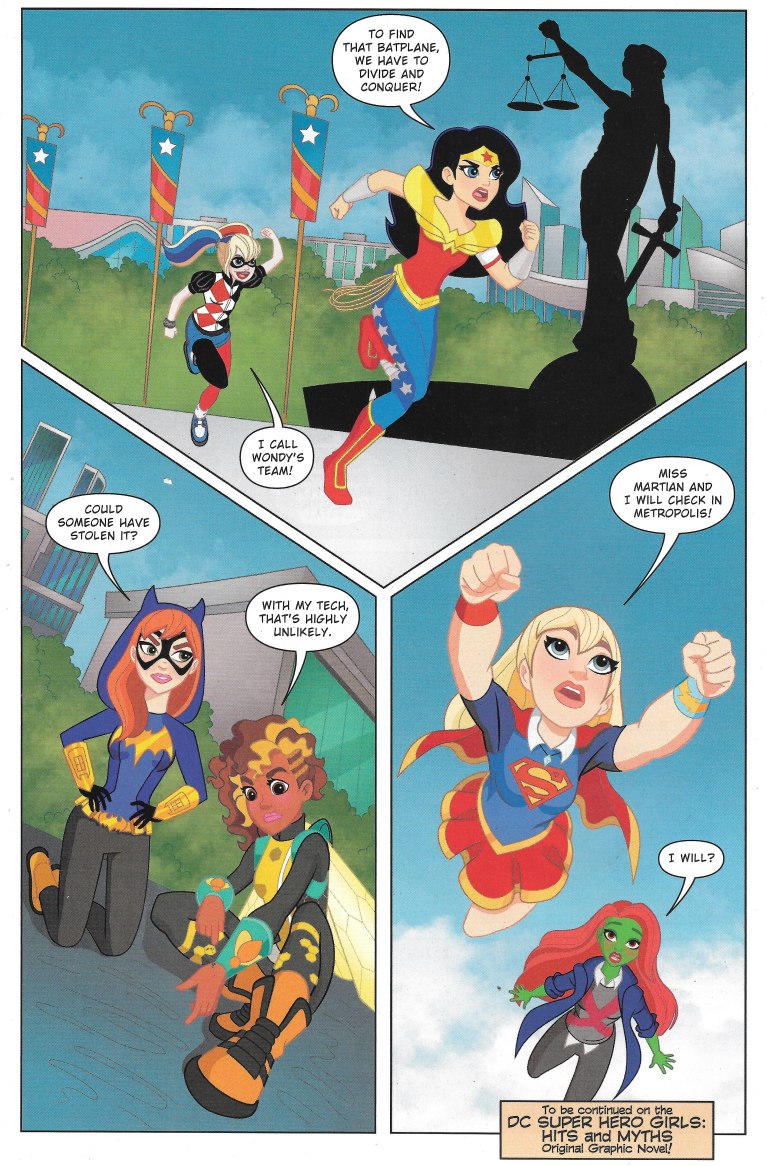 So what did I think?

For an all-ages book, it does all the right things to appeal to its target market segment. This is an excellent book for preteen and young girls (perhaps some boys too) who like these characters. The stories do have the vibe of a Monster High School with superheroes without any real serious conflicts. The book is easy to read and would be perfect for beginning readers. I recommend that parents with girls interested in superheroes pick up a copy or two and see if it is their bag. I think you'll be happy you did.
Posted by SonOfCthulhu at 2:36 AM