Some random Wonder Woman books, Part 13
The Crapbox spits out the Cheetah… 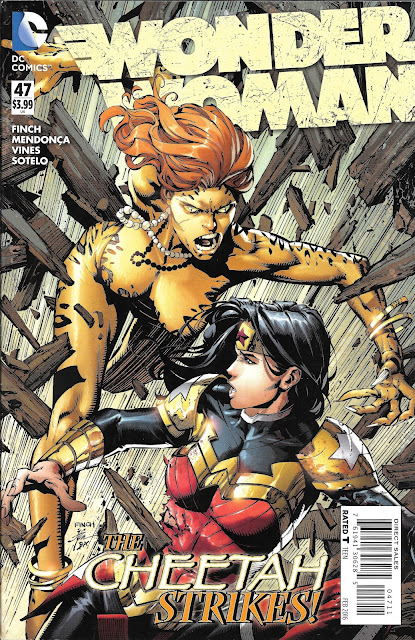 The New 52 gave Wonder Woman this split personality. In her own book, she appears at the time of issue number 47 to be largely unchanged from the Wonder Woman we all know and love. However in the Justice League and Superman Wonder Woman books, we get this pants wearing Wonder Woman sometimes who seems a bit uncaring for the general populace, having the attitude of a warrior in the "300" mold.

I'll reserve my judgement on THAT Wonder Woman until we get to her, but will kindly share my feelings on the main title in the 52 universe.

I picked this issue up specifically because I saw Cheetah on the cover, and I knew the smattering of books I had did not have her in them. You can't very well cover Wonder Woman without at least a passing reference to her top tier villain. So I snatched it up and here we go with a look see at the 52-verse. 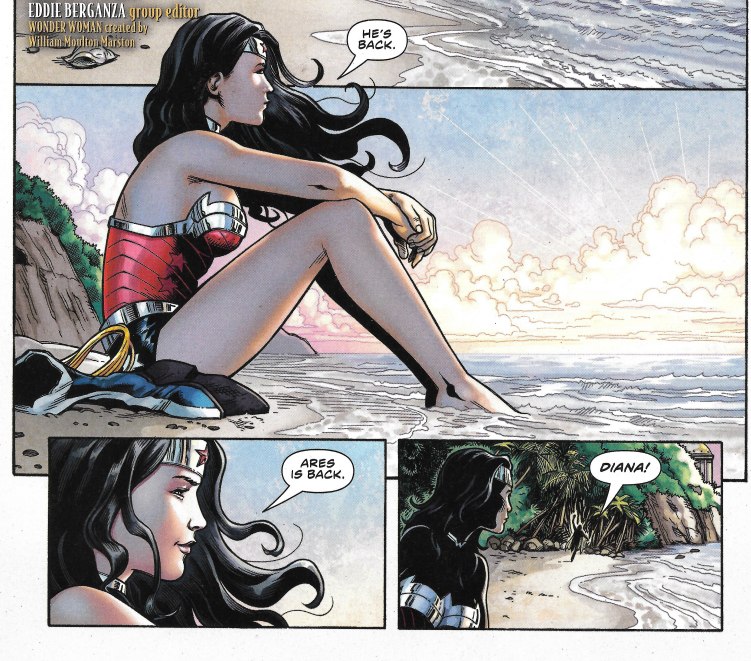 There's no pants on this Wonder Woman, I hope you noticed. I mean on the cover there is pants…inside, no pants. The armored pants look was something that came with this version of Diana, but we (that's the Crapbox "royal We") seldom see it used.

Maybe she was swimming?

I don't know. I do know she is mooning over the fact that Ares is back. Ares was the guy she was upset with in the Wonder Woman movie, so not sure why she has that lovelorn, bemused stare, not to mention she's supposed to be dating Superman right about now… anyway… NONE of this is the story… What is the story then? 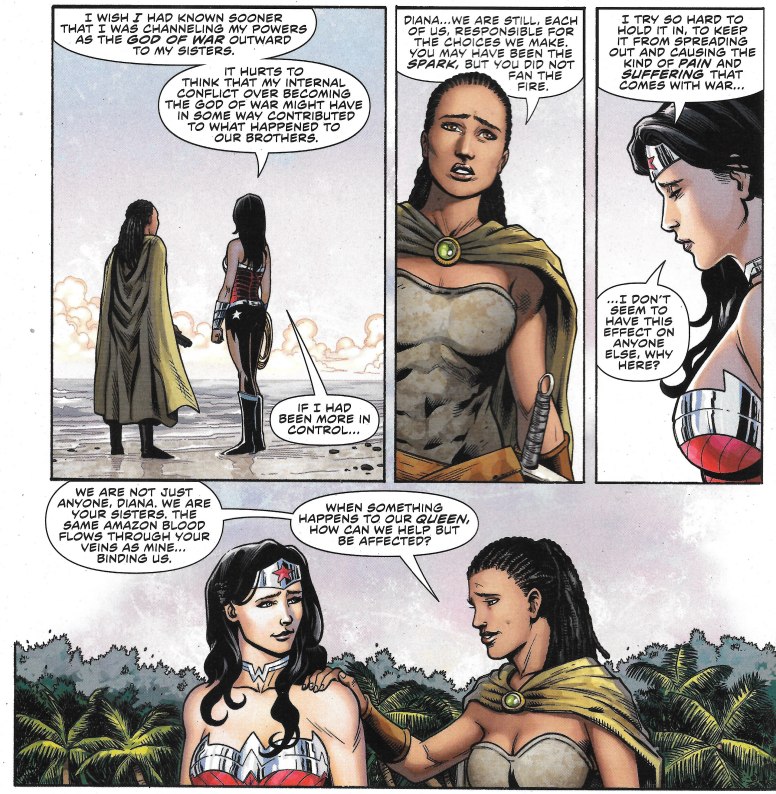 That Diana is the God of War now, something that gives her the power to transmit telepathic or empathic feelings to her fellow Amazons. And she is also their Queen. I guess I missed a lot in the prior 47 issues of this New 52 version.

Might explain why she's happy Ares is back, because I'm betting she wants to get rid of this God/Goddess of War stuff…but even that isn't the story.

No this is the story: 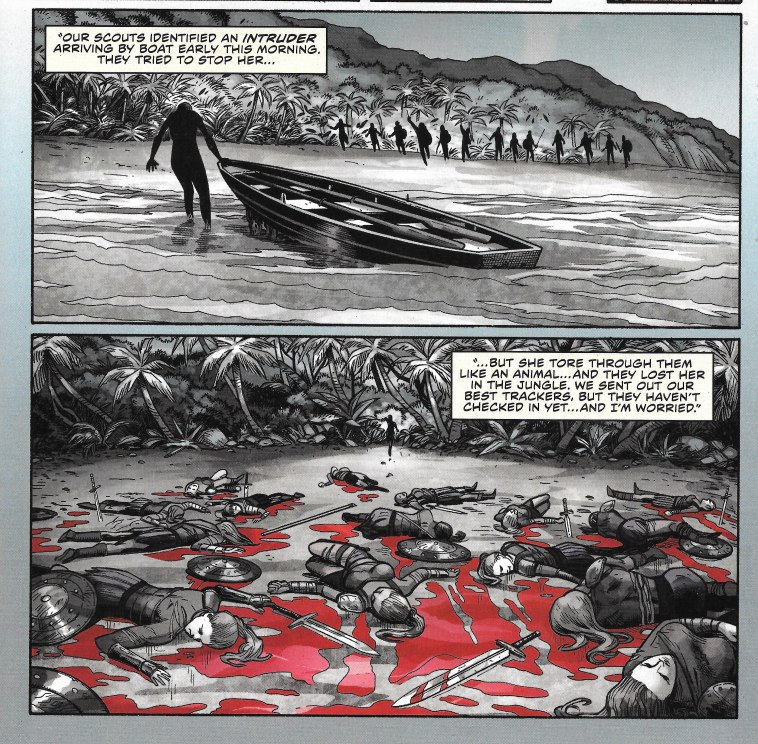 Note: "She tore through them like an animal…", which leads Diana to know it must be… 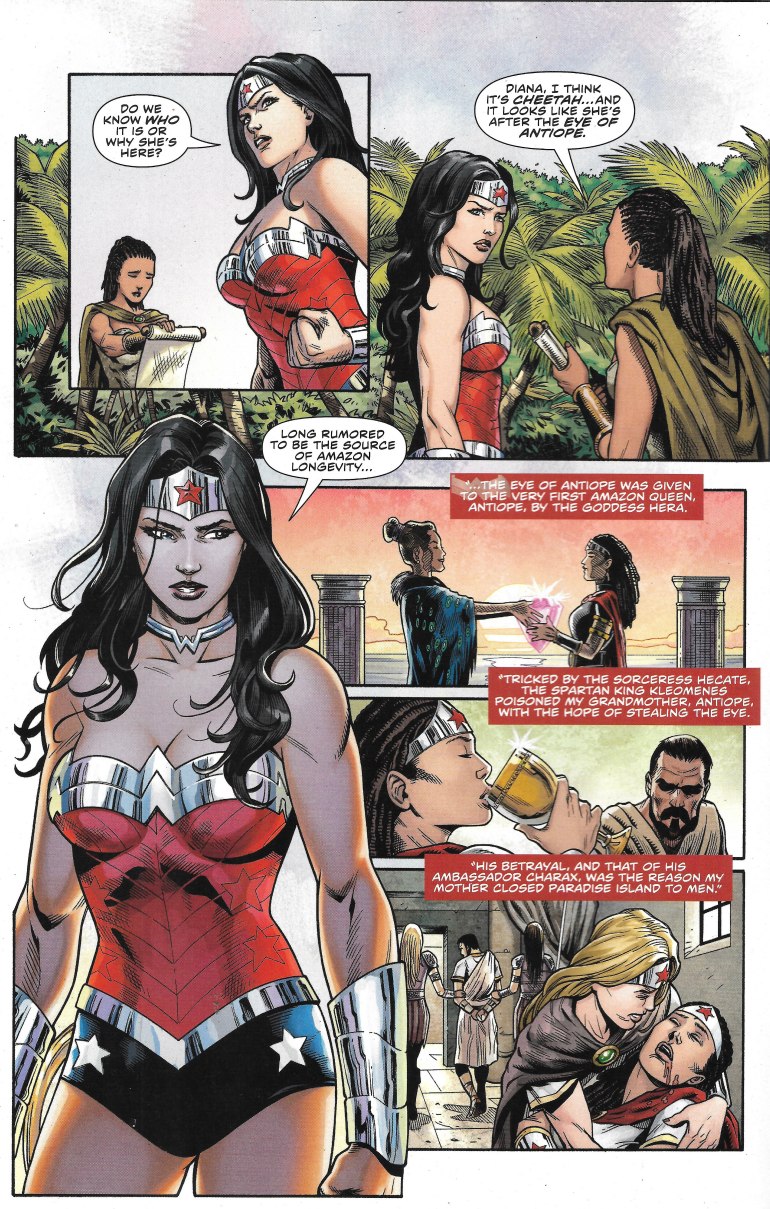 …who? She has no idea? Seriously? So we are force-fed who it is and then force-fed why she's here. Also we get a moment or two of Amazon history, which is always nice.
So big glowing gem thing, source of Amazon's never aging, cat-woman thing going to get it…got it? Okay. We're off…

With the plot out of the way, this becomes a standard chase movie. Normally that wouldn't hold much interest for me, but Finch, Mendonca, and Vines manage to hold my interest. Sure the plot just got handed to us on a silver platter, but I might have gotten lost if I had too much goings-on to follow from a random pull out of the Crapbox issue. Plus look at these gorgeous surroundings that we are presented with: 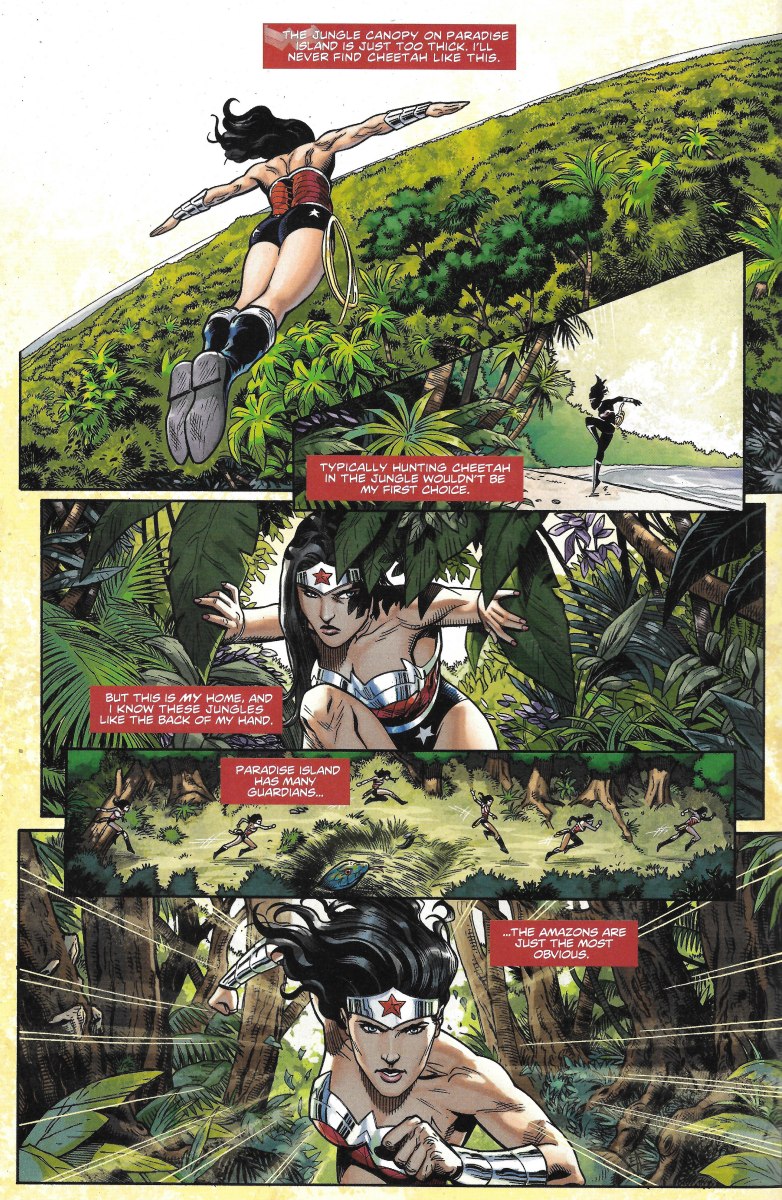 Just as suddenly as Wonder Woman starts her trek, it appears the Cheetah's reached the end of hers. But all isn't what it seems, as Diana pulls back the foliage… 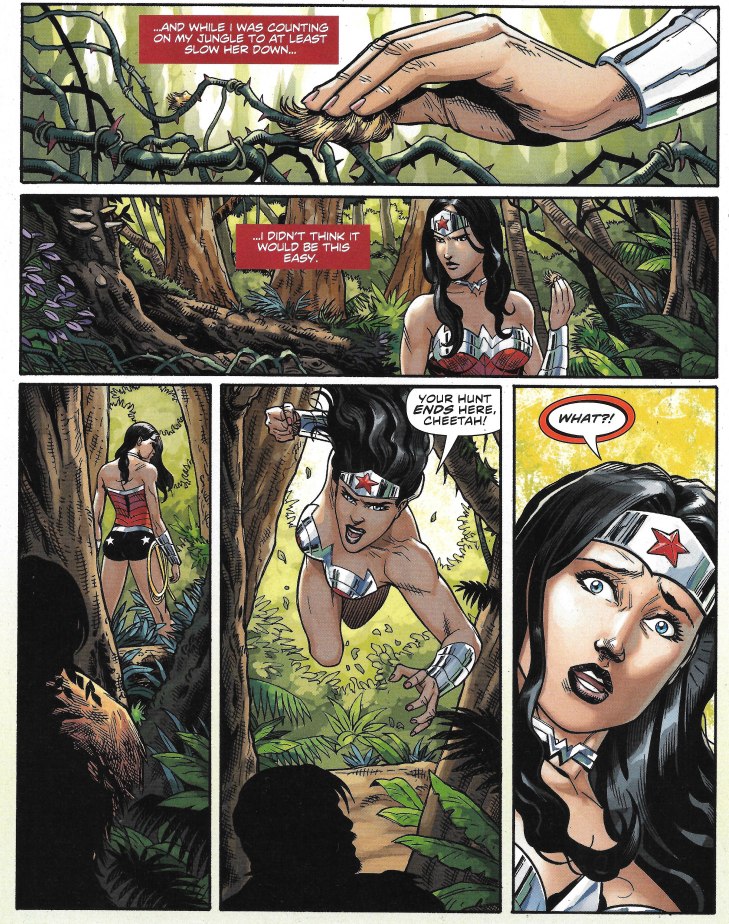 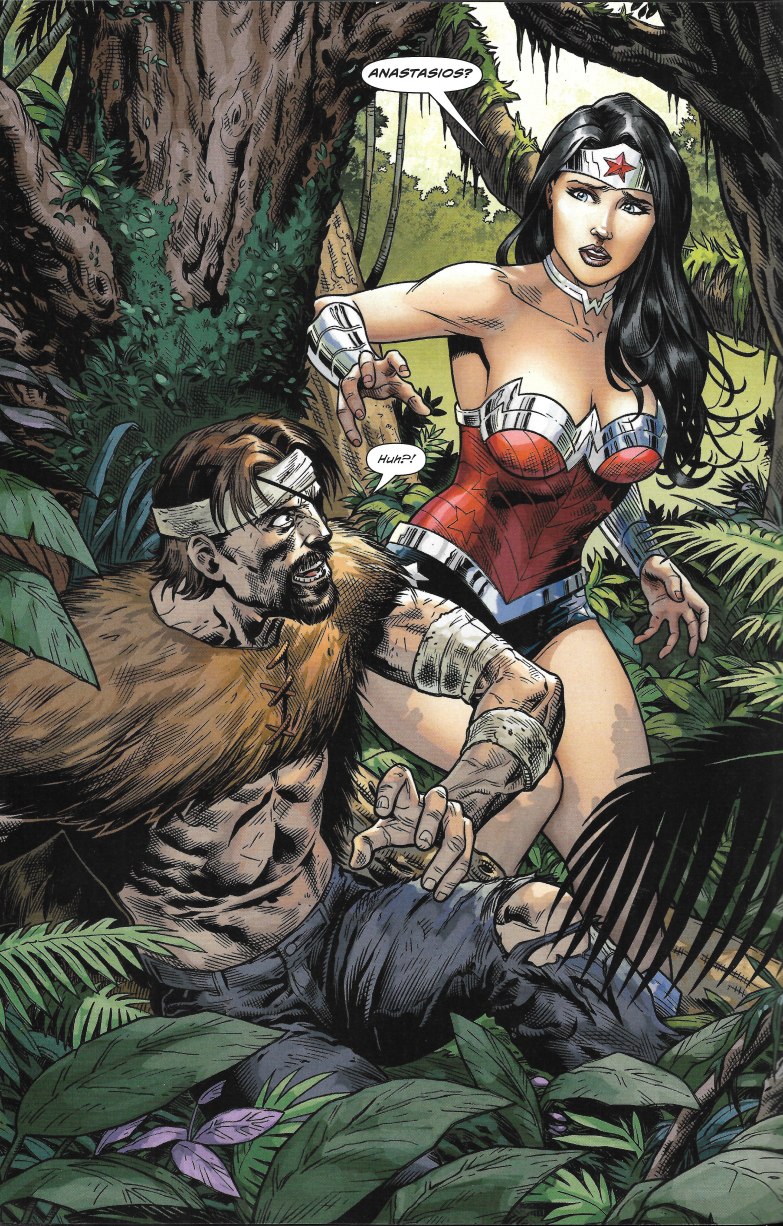 …and finds a guy whom she knows by the name of Anastasios. A little background before we go on is in order here. Perhaps he can tell us if we ask nicely. 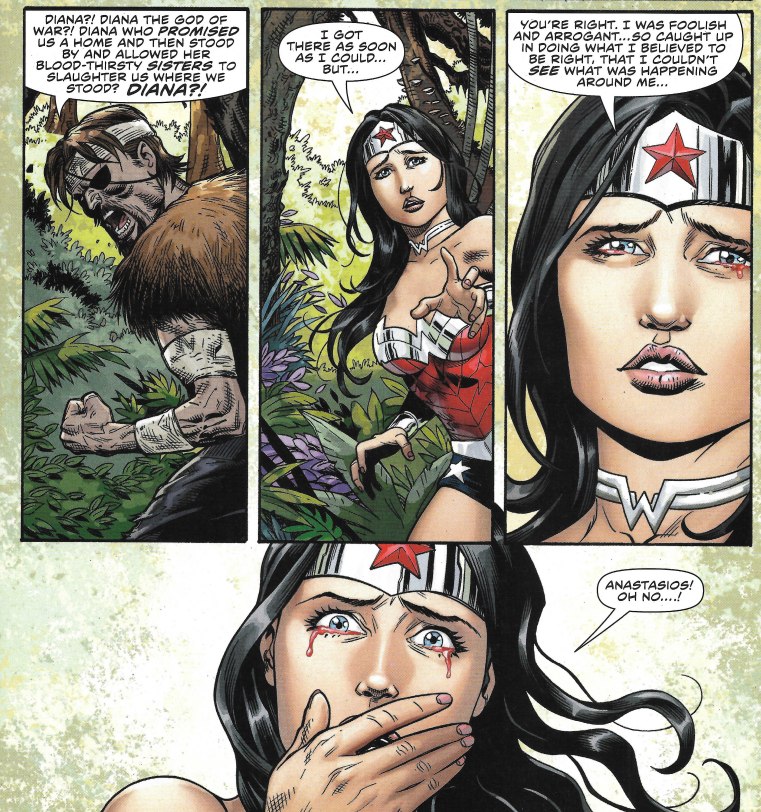 Ah, so these are the "brothers" she referred to earlier, who it appears she offered asylum to and her fellow Amazons "accidentally" slaughtered. Thinking about this makes Diana cry blood. Because? I don’t know and it's not explained, but I have a theory this all ties in to her being the God/Goddess of War somehow. 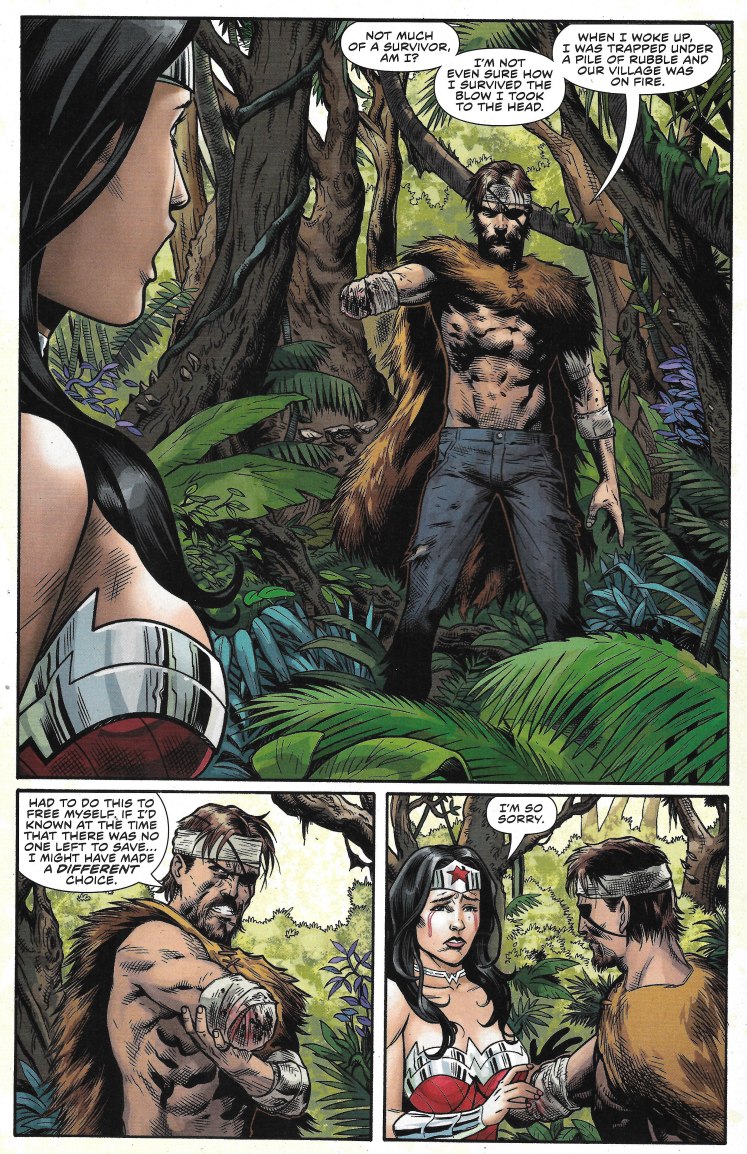 Oh, and I suppose seeing Anastasios like this probably doesn't help with that guilt trip she is on.

I wish I had more than a panel or two of clues as to what any of this means, but I don't. The two share a moment where Diana is sad and apologetic and Anastasios is angry and inquisitive. Diana shares she is after Cheetah and Anastasios bids her to go. So she does, but promises to return soon and help him in some way.

In short half page, she has caught up to Cheetah, approaching the wary feminine feline cautiously. 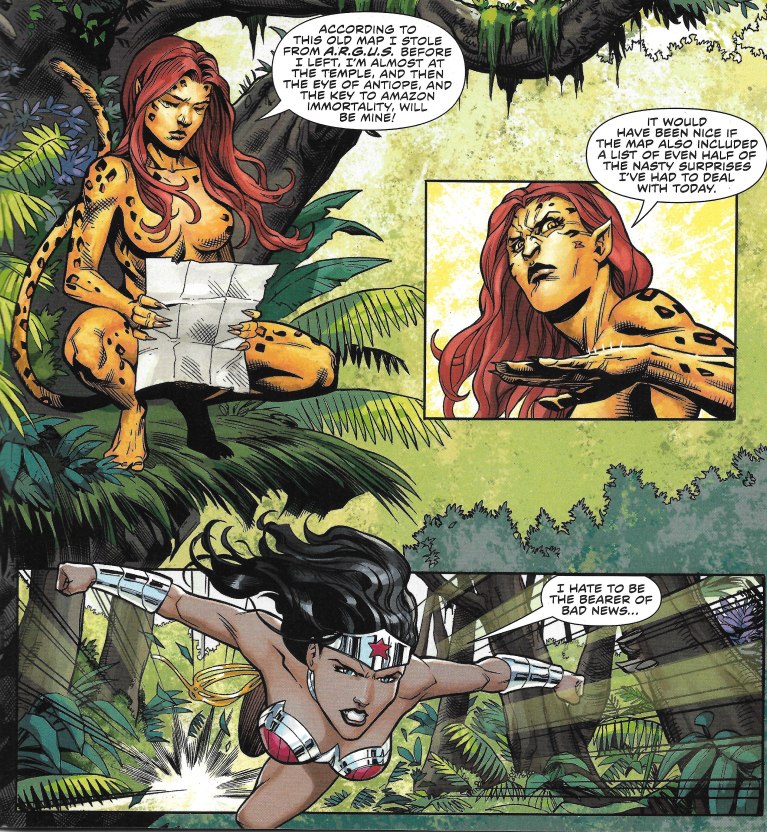 She takes two panels to assure herself that the wind her approach won't give her away. Then as Cheetah is still reviewing the map, she rushes her while COMPLETELY GIVING AWAY THE ELEMENT OF SURPRISE BY MAKING A PLITHY COMMENT…

Where did I put that facepalm gif again? 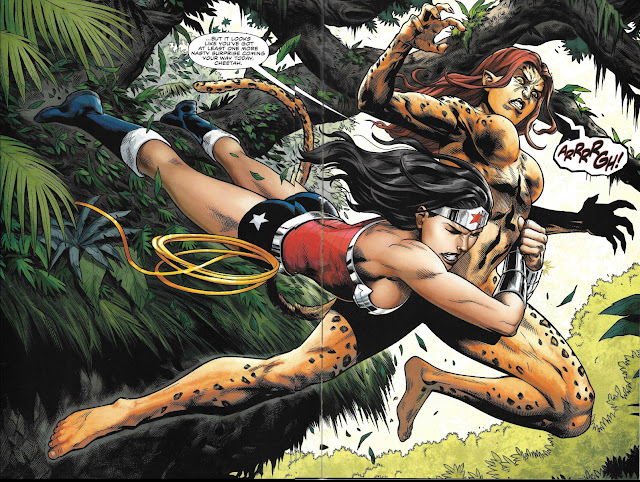 Yet still she is able to tackle the Cheetah while she is unaware. In a nice two-page spread we have her doing just that. 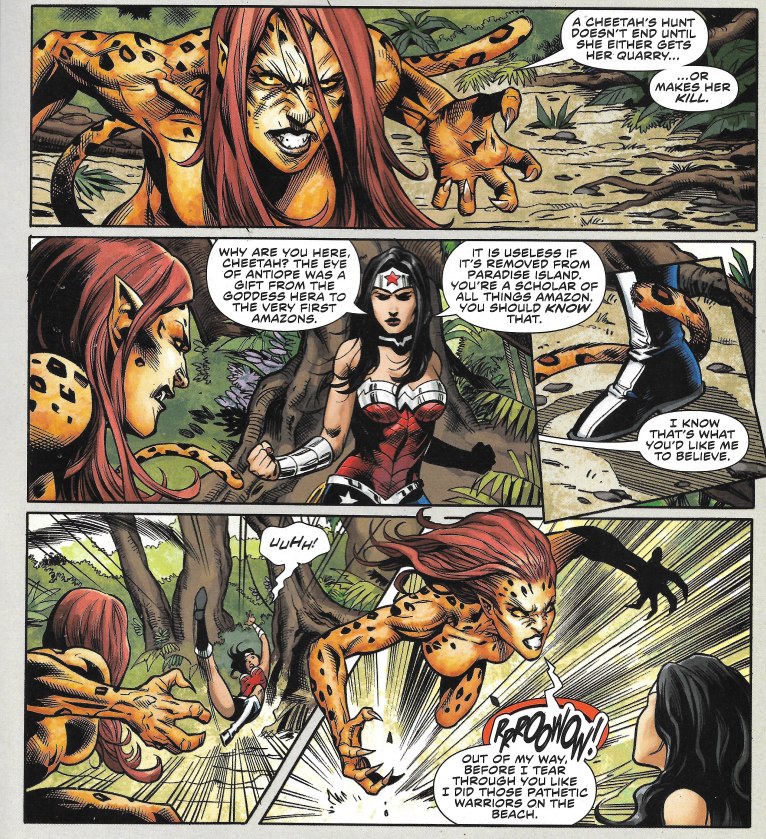 This leads to a silly face off between the two, that contains some improbable physics. Like this bit here where Cheetah trips Wonder Woman with her tail. I don't think feline tails work like that. I've owned cats for most of my adult life, and then only time any of them have tripped me up have been when they would weave in and out of my legs while I was opening their can of wet food. 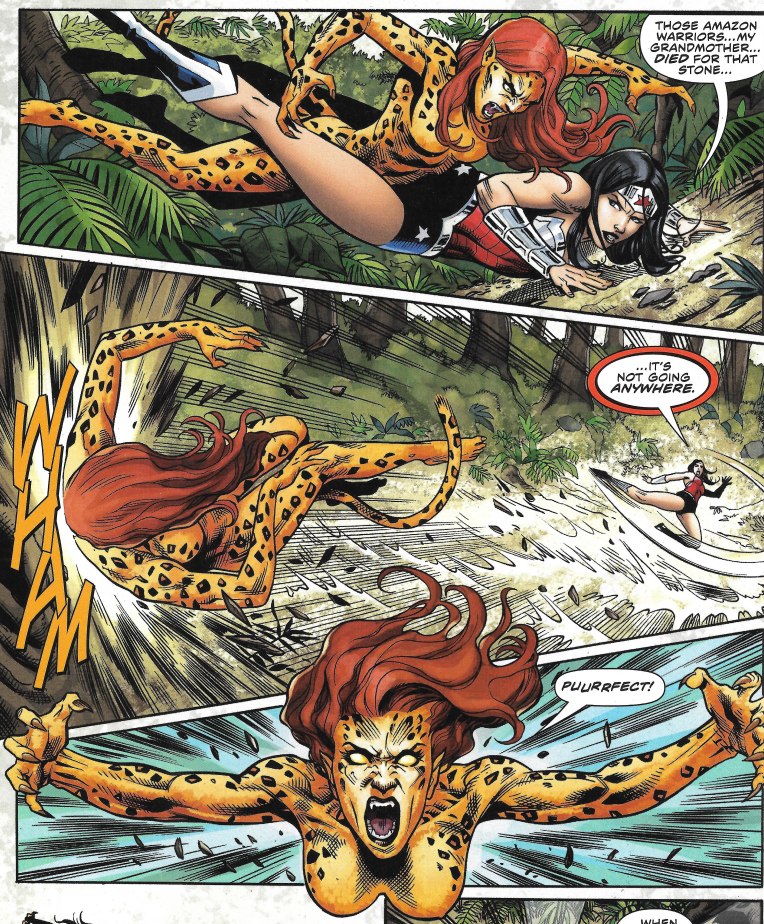 That leads to this awkward…ahem!, attack which Diana throws off. (it's a family book! A family book!) 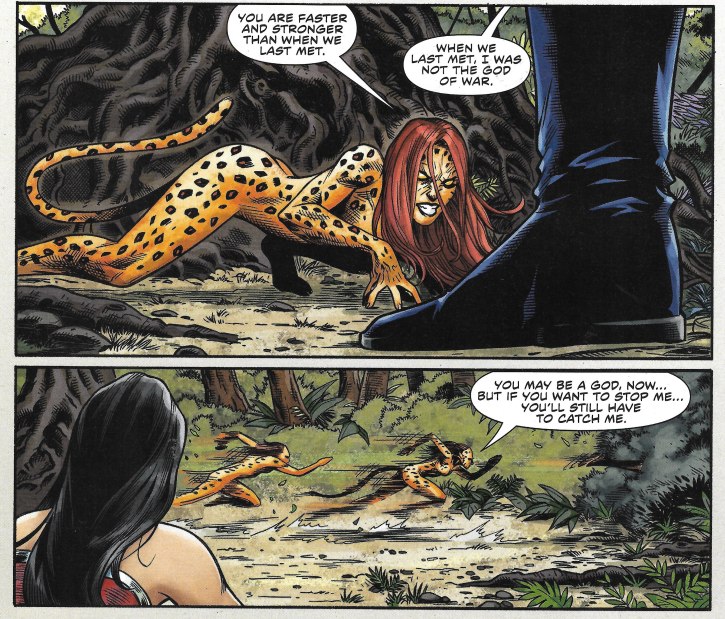 After Diana tosses the villainess one more time, Cheetah has had enough and races off to get the gem instead of going toe-to-to with her adversary. Diana, who could have held on to her or knocked her out when she had the element of surprise, can do nothing but follow her now forewarned adversary. 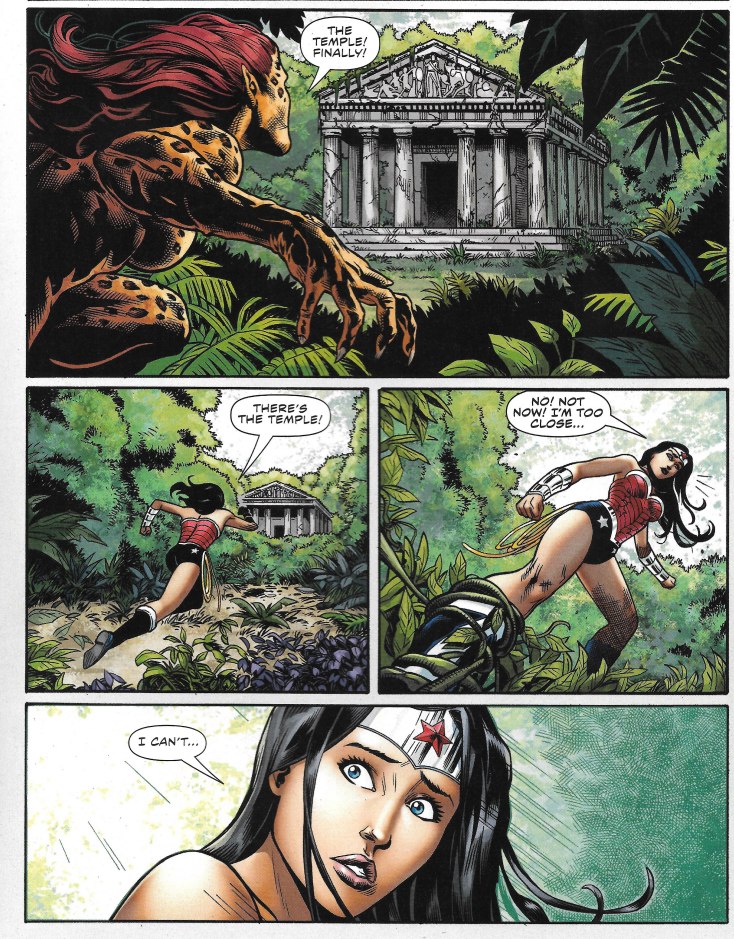 Cheetah being faster means she reaches the temple first and that's when Diana makes a very fatal discovery. Due to her Godhood, she cannot enter any temple not dedicated to her. So she is helpless as Cheetah retrieves the gem. 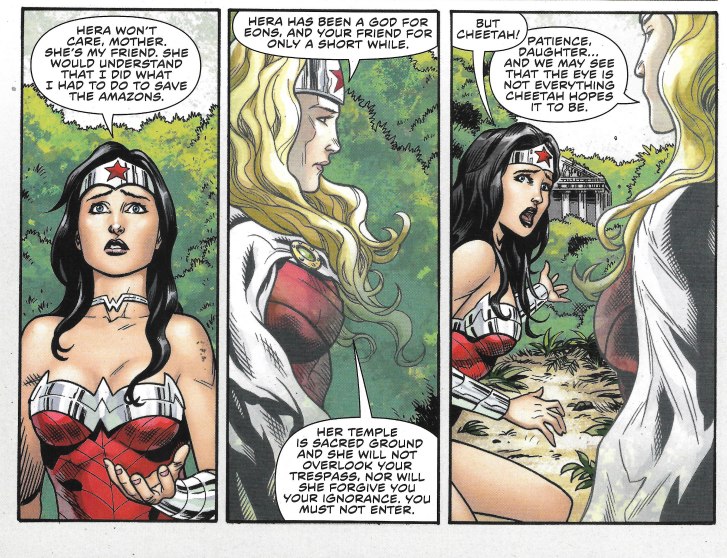 Her dead mother's spirit appears to explain all this to her. Diana is still adamant that she needs to stop Cheetah, but Hippolyta chides her like a mom admonishing a squabble between two five year olds.

"You sit down, young lady and finish your broccoli. You can go play with your friends when you are done."

Cheetah, being under no such restrictions, already has the gem in hand and certain facts about it now come to light which make her holding it in question.

But first she has to gloat just a little bit. 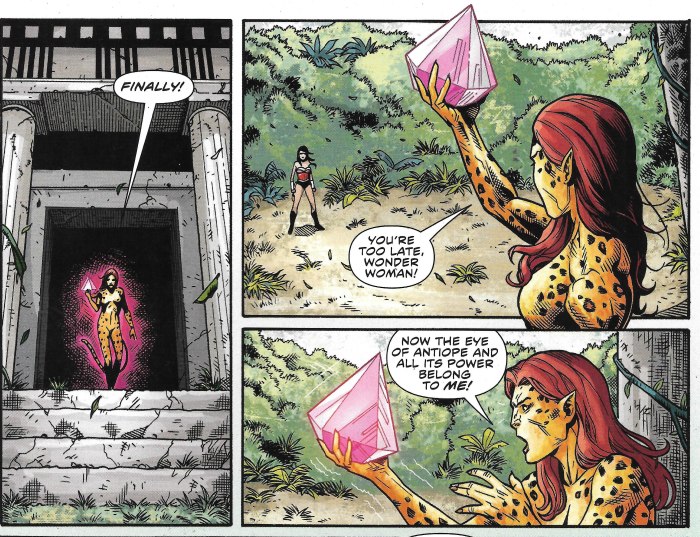 And then Wonder Woman realizes why Cheetah won't be able to steal the gem. Her animal-form powers were a magical gift from the God Urzkartaga and unfortunately, it is a one-or-the-other deal. 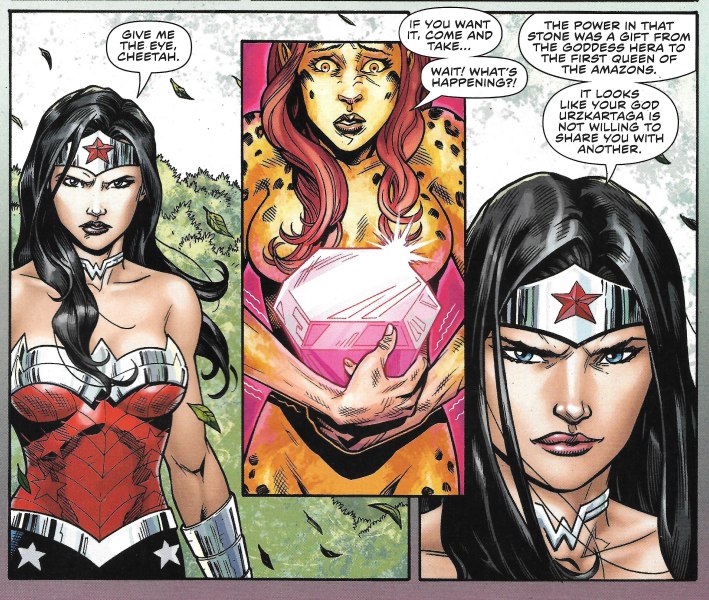 Faced with the choice of giving back the gem or returning to her fully human form of Barbara Minerva, Cheetah chooses to return the gem. 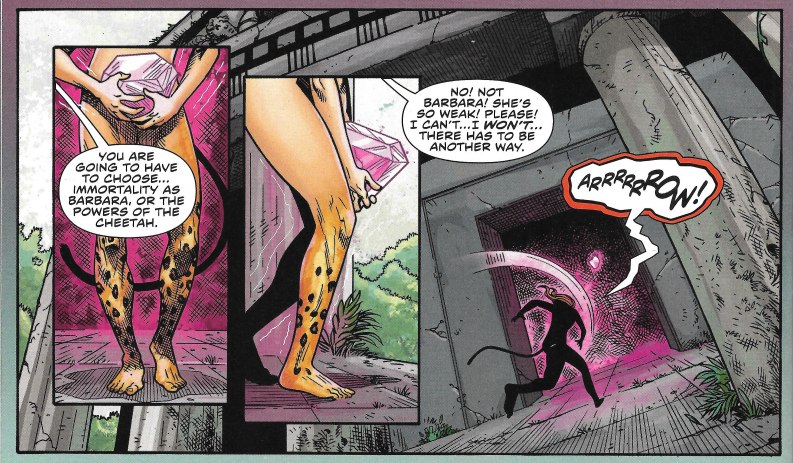 In her frustration, she blames Wonder Woman (who, when you think about it, did absolutely NOTHING this issue but cry blood and wrestle around with Cheetah before letting her escape) and races off into the jungle. 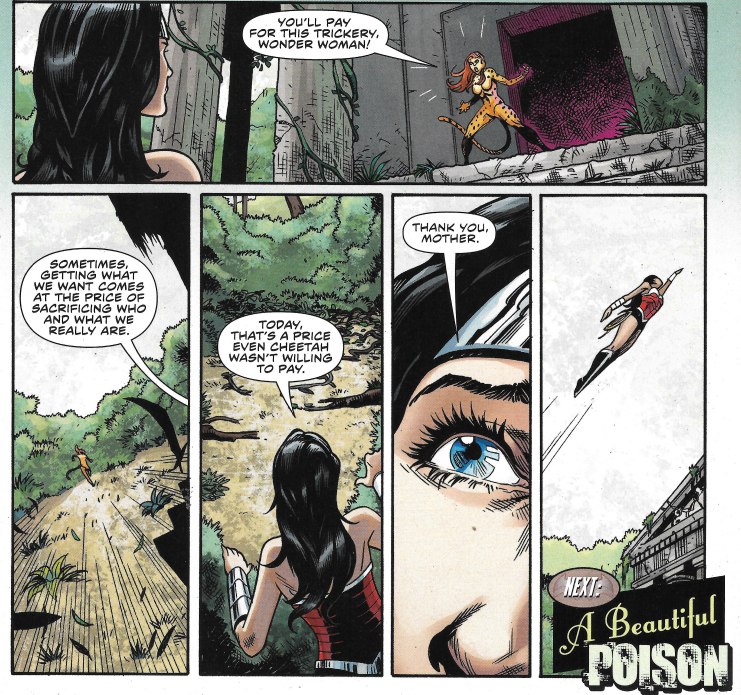 Diana …lets her go? Why? What about those dead Amazons on the beach? Or were they just resting there after the battle? Why not CATCH Cheetah so she can't pull anymore shenanigans?

I don't know. This issue was a muddle. On first read-through I thought it was a decent blend of art and story. But upon review, it's kind of a snore. Nothing happen that appears to have lasting impact on anyone and we have Diana doing things that don't appear so rational. The art is nice, I suppose. Still, would not recommend based on this one book even though the pictures are pretty.

Well, that's my review. Now can someone explain to me the pants/no-pants thing? Please?