Some random Wonder Woman books, Part 20
How are things looking? 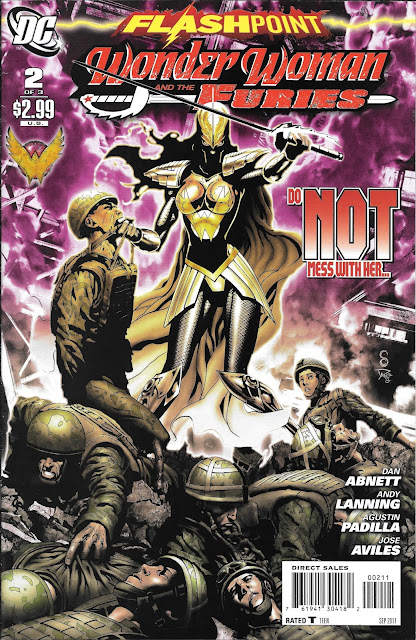 Second issue in and we change art teams. Not a good sign, right?

I must admit that I don't like that Padilla and Aviles don't go for the detail work like Clark and Beaty did. Staples colors are a bit bright too.

So tonally this is a big change for the story. Something that did seem dark, brooding with lots of intricate things going on in the background is now lighter and more "Flashpoint: The Animated Series." Maybe a comparison to Timm seems like a good thing, but not in the way I see it. Doesn't make it bad necessarily, but it does feel like a bump in the road.

Speaking of the road, we go back fourteen years to start this one off, back to the proposal and how that all went down. 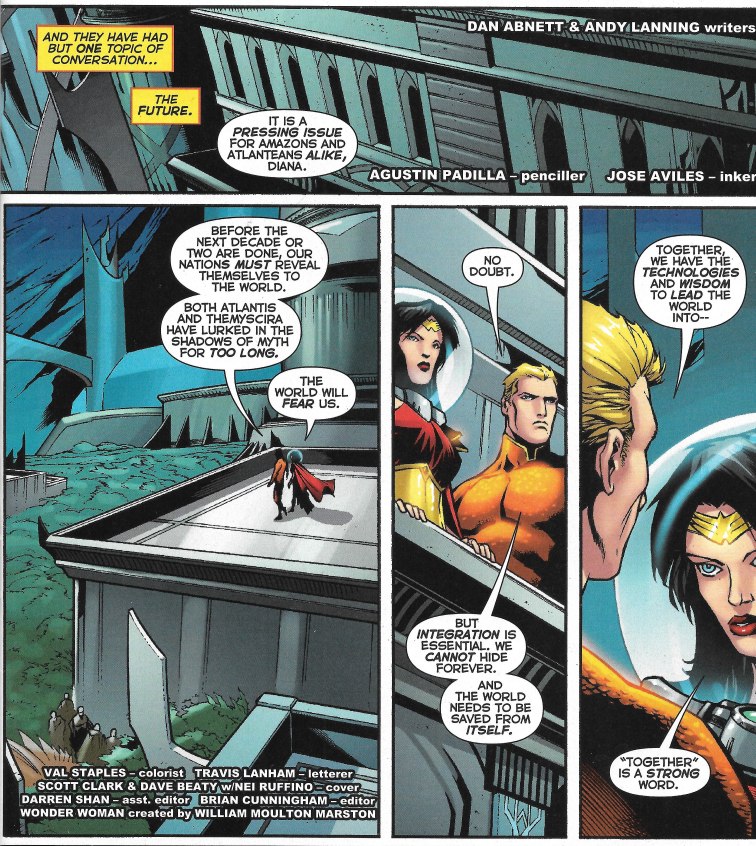 Not too bad, apparently. Diana even consents to Arthur having an affair with Mera if need be, which is totally in keeping with Marston's idea of sisterly love not needing to be obstructed by jealousy over a male mate. Also Diana rocks a bit at showing off her fighting skills, even underwater. 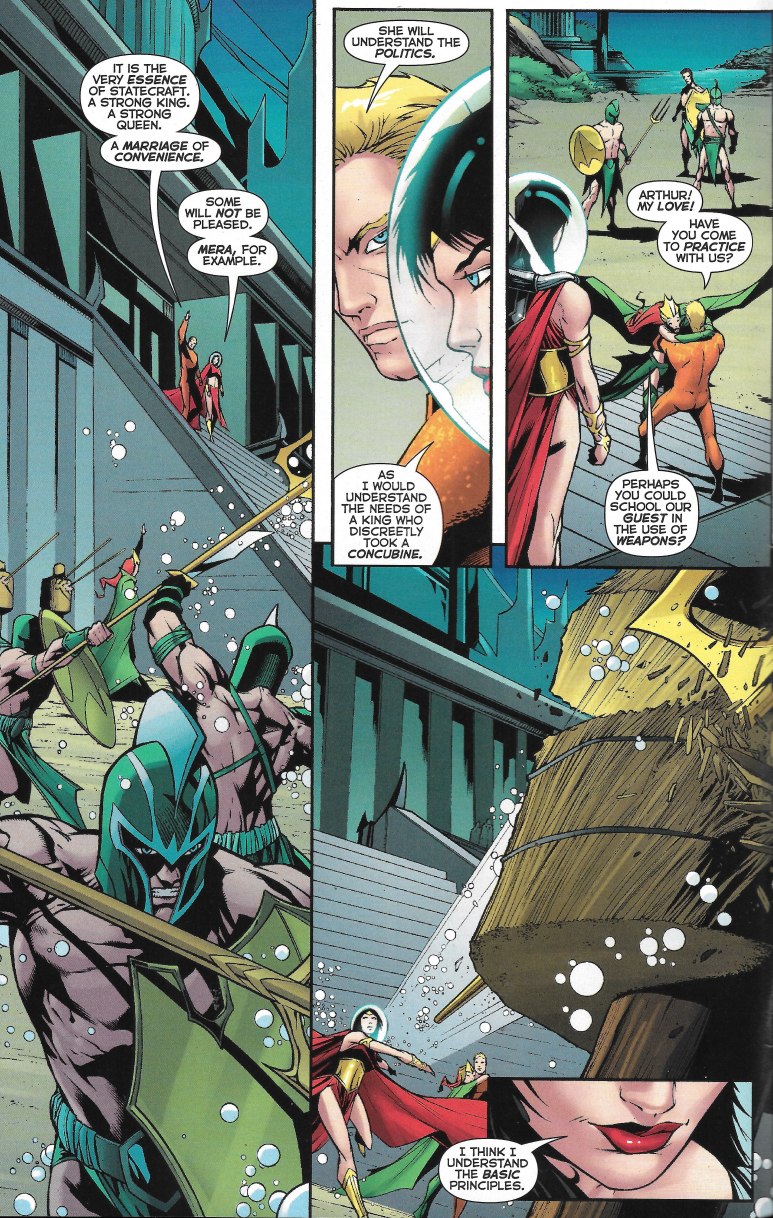 I guarantee that if I tried to throw a trident underwater it would go all of six inches if I was lucky.

Everything would have gone AMAZINGLY well had Orm and Penthesilea not screwed things up for everyone involved. And by everyone, I mean the entire population of Earth.

Or wait, am I still blaming Barry's mother for all of this stuff happening? I'm having some difficulty remembering.

Whoever's fault it is that we are at this juncture, the story now moves forward as Diana pays her respects to her recently deceased mother. She's trying hard as the new Queen of the Amazons to hold back their rage and fury, trying hard to push down those same emotions within herself…when Arthur pushes his luck just a bit too much. 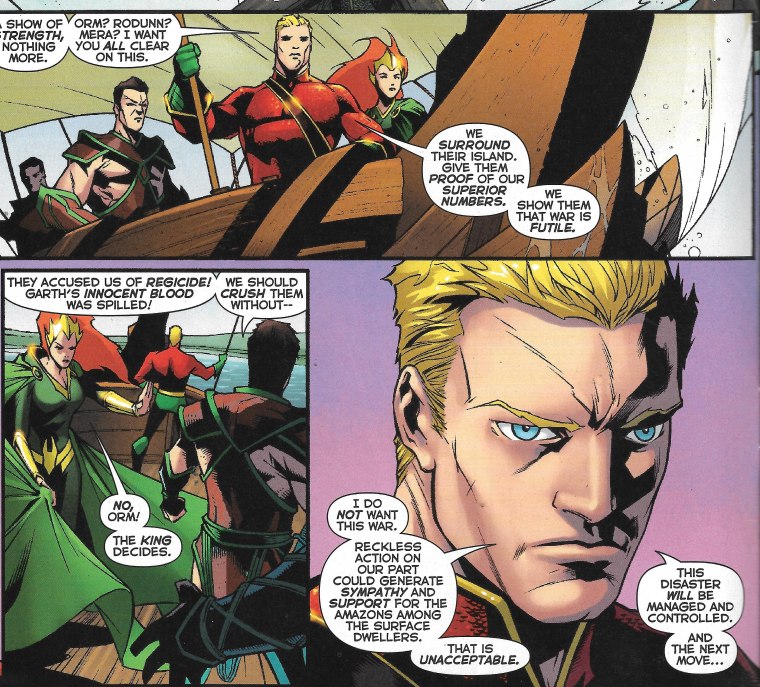 He tries to puff out his chest and stare down an enemy force of immortal warriors who have spent centuries stuck on an island doing nothing but learning how to fight a war with the demons below them. Back off, buddy! Your bluff WILL get called. And you're not even the new, cool muscley Aquaman. You're still wearing orange and green. 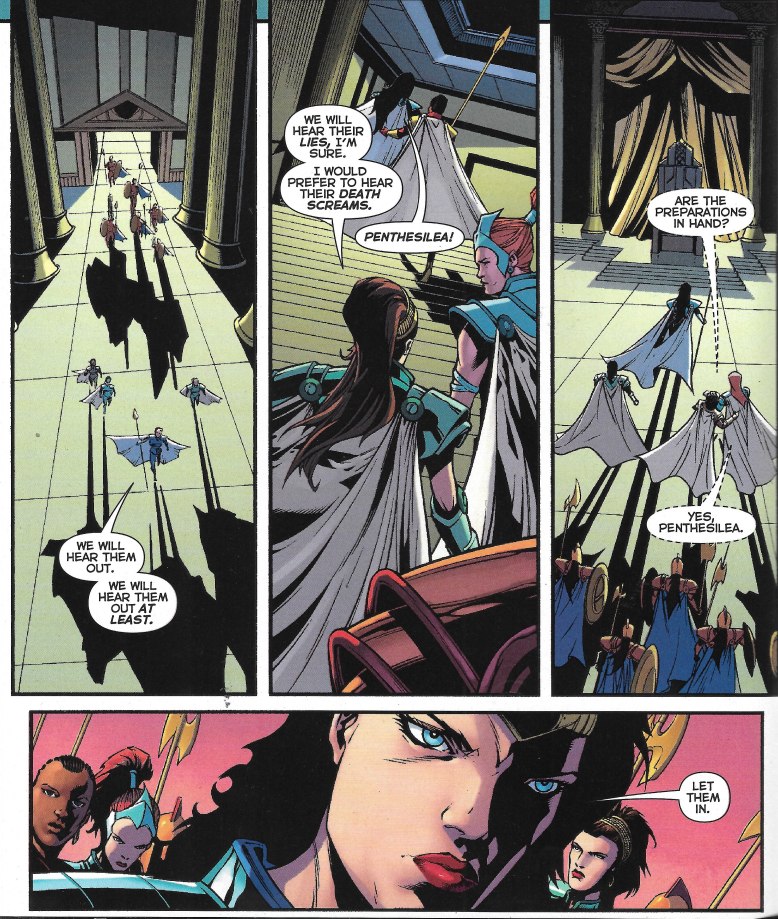 Let these chicks cool off before they chop your entire force into sushi. 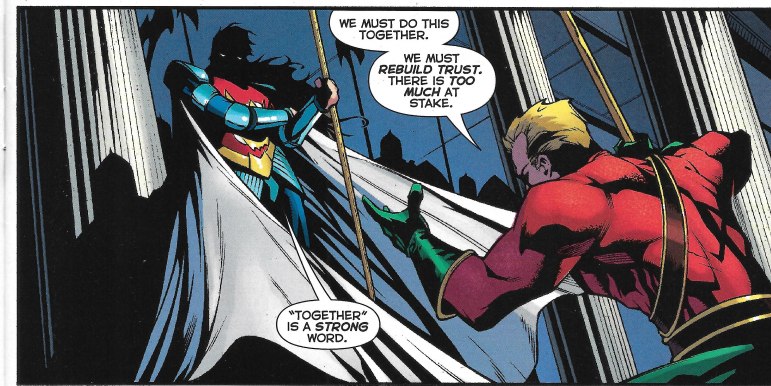 But no…he tries to be "strong" against the Amazons. 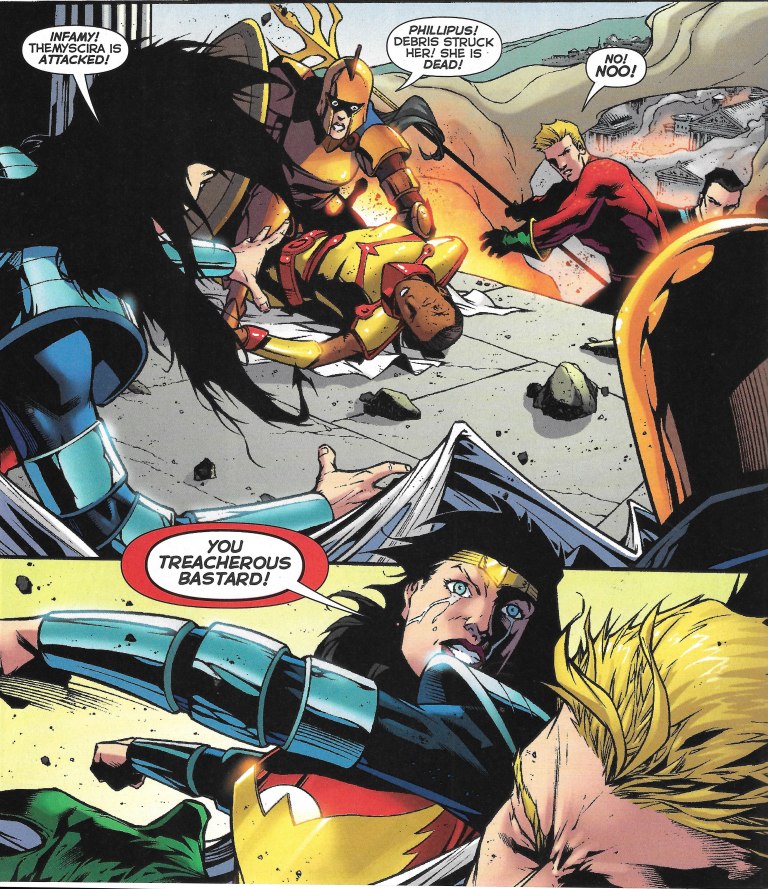 And Penthesilea's duplicity costs another Amazon life as explosions rock Themyscira, by all appearances caused by an attack by Arthur's sea force. Bye, Phillipus! With your death ends the hope of this conflict. If only you hadn't started a pen-pal relationship with Nora Allen which caused you to be standing two meters to the right of where that pillar would have missed you when it fell…but no. Thanks, Barry. 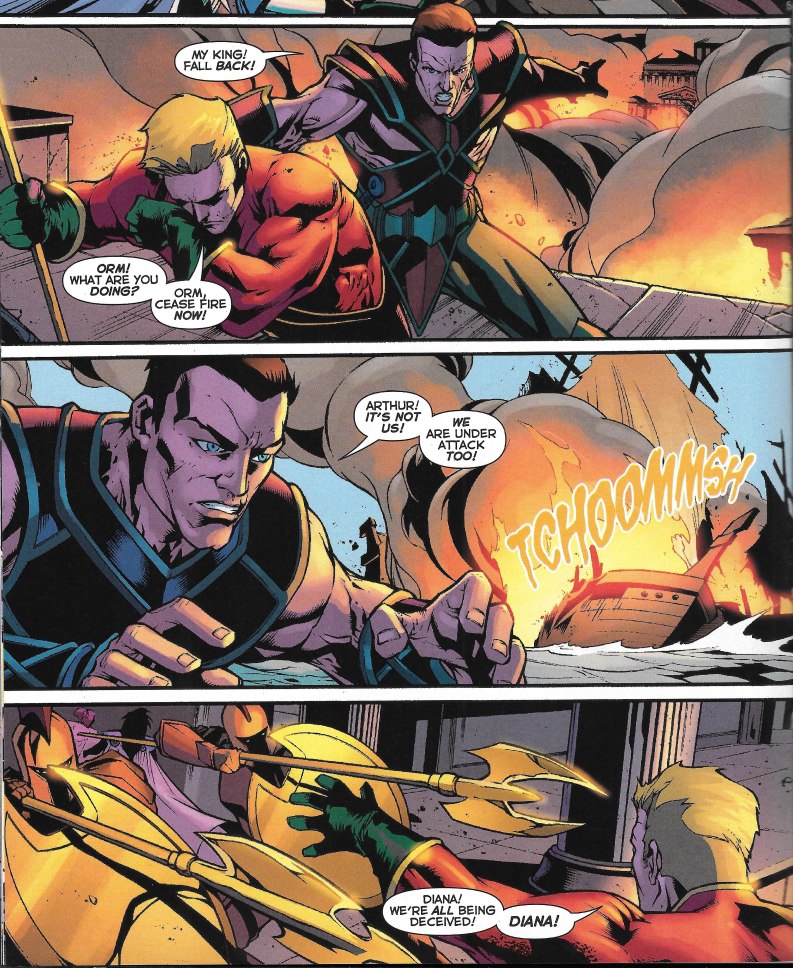 Arthur gets that this is duplicity, by the way. You'd think his telepathy would have already gone off like spider-sense and told him something was up. And it has, somehow. However all hope of convincing Diana to see the light is gone now, mainly thanks to his "show of strength." 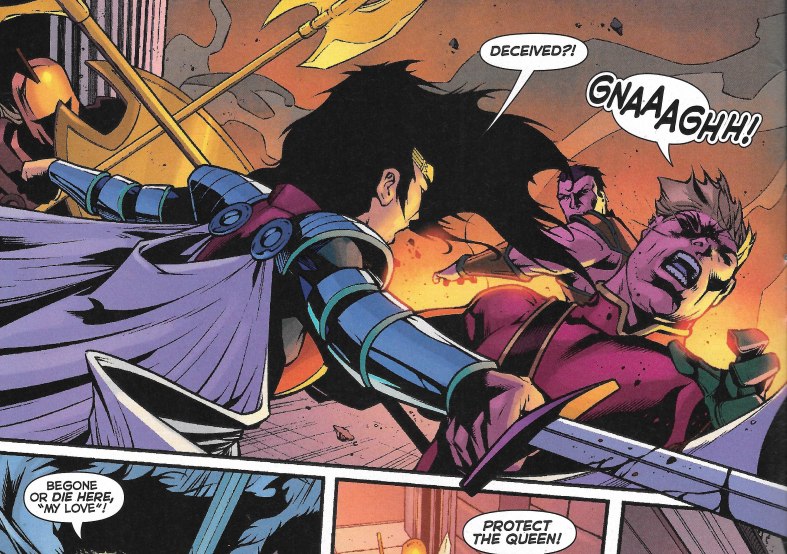 For all this, he gets a slice across the cheek and nose, which, when you really think about it, should be a MUCH more extreme wound. She's right there. Forewarning or not, Arthur's head should be rolling down those stairs like a slinky.
But no. He survives. They both do, pulled in separate directions by their closest allies who actually are their worst enemies. 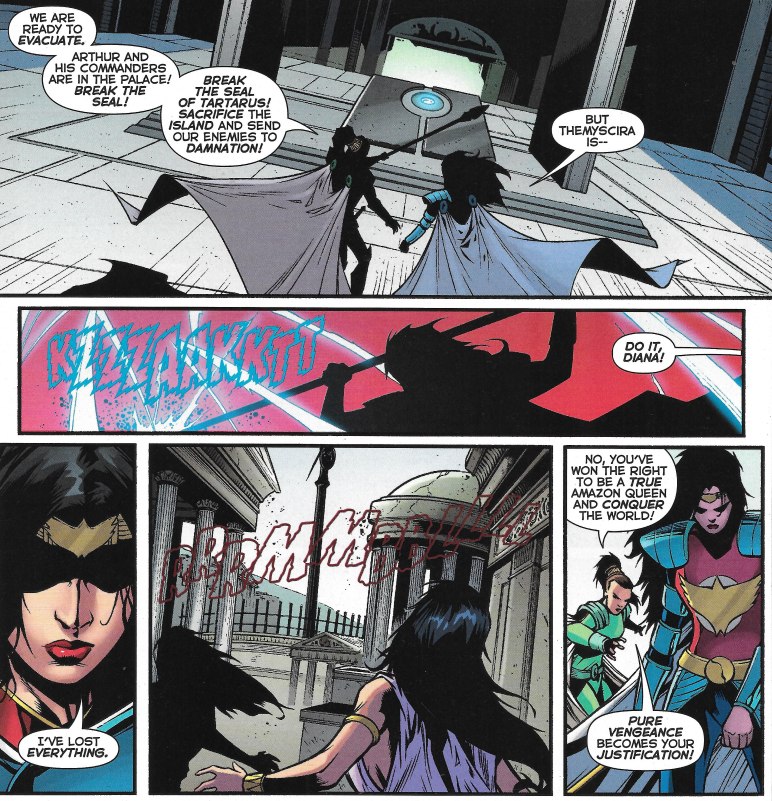 And of course Penthesilea's treachery doesn't end there. She convinces Diana to sink Themyscira in an attempt to drown Aquaman's forces. Diana agrees and some part of me thinks this is the stupidest move ever.

"Let's sink the island underwater to drown the forces that we know can breathe underwater." 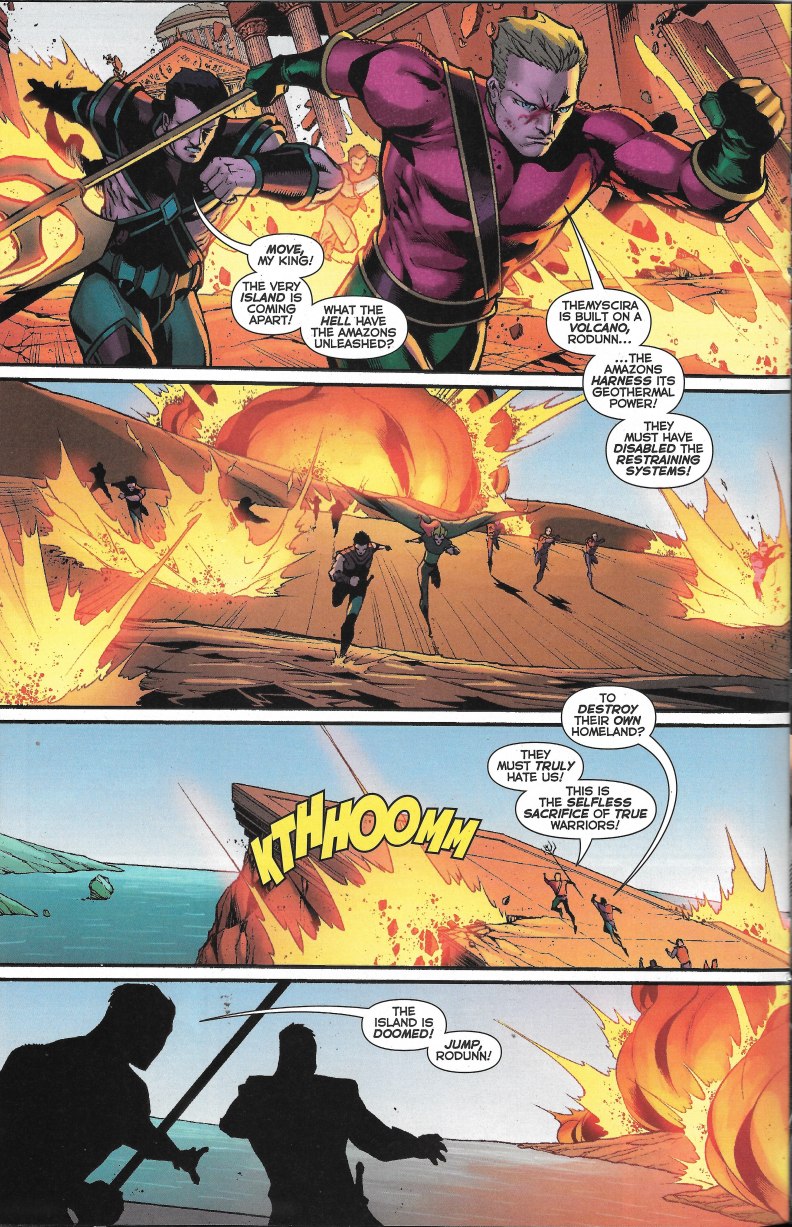 Aquaman explains that they are sinking it by using a volcano, which somehow makes everything all explodey BEFORE it sinks. Okay, whatever. Still a dumb plan. 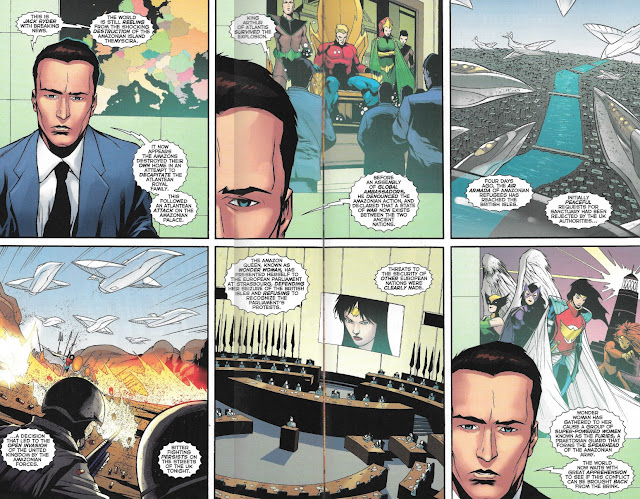 We end up with a two page spread that shows Atlantis declaring war on the Amazons, the Amazons taking over the British Isles, Wonder Woman acting like a loony person saying taking over England is justified somehow, and several women superheroes who will have one panel in this issue and one the next to prove up what THEY were doing during Flashpoint. 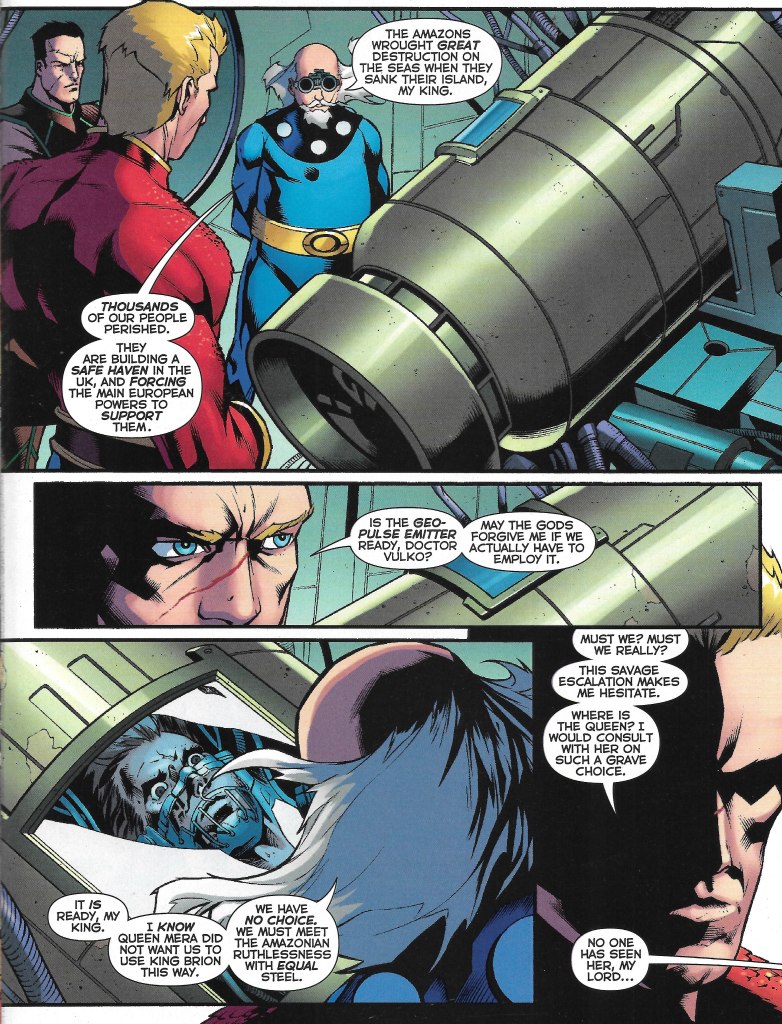 …wait I mean Prince Brion a/k/a Geo Force in a device to use his Earth powers to create havoc. If it gets any worse. Which it will. 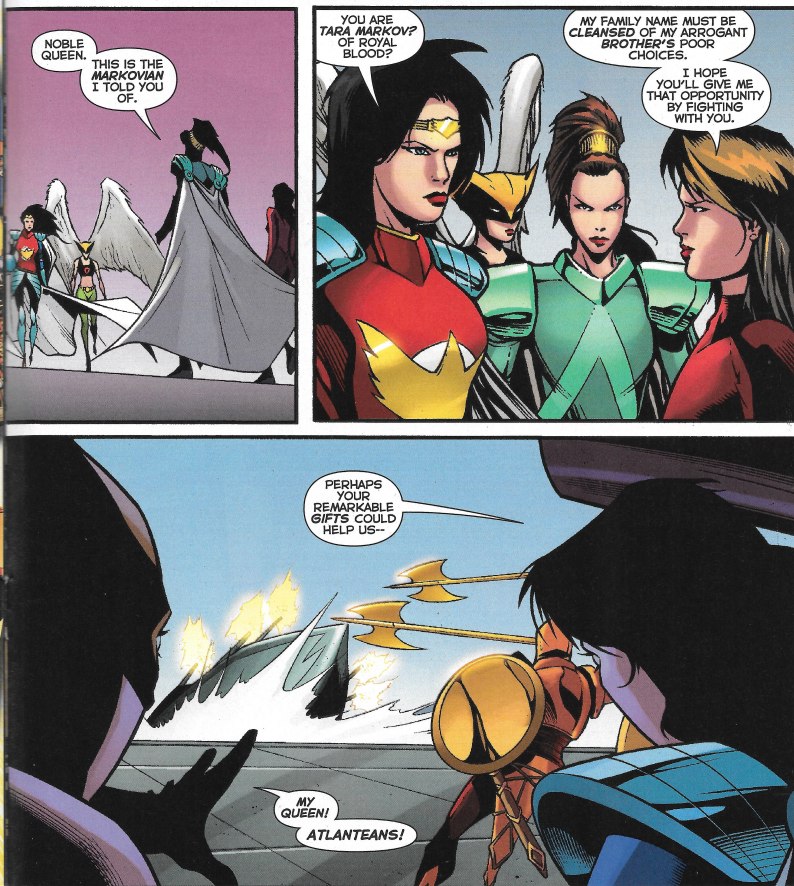 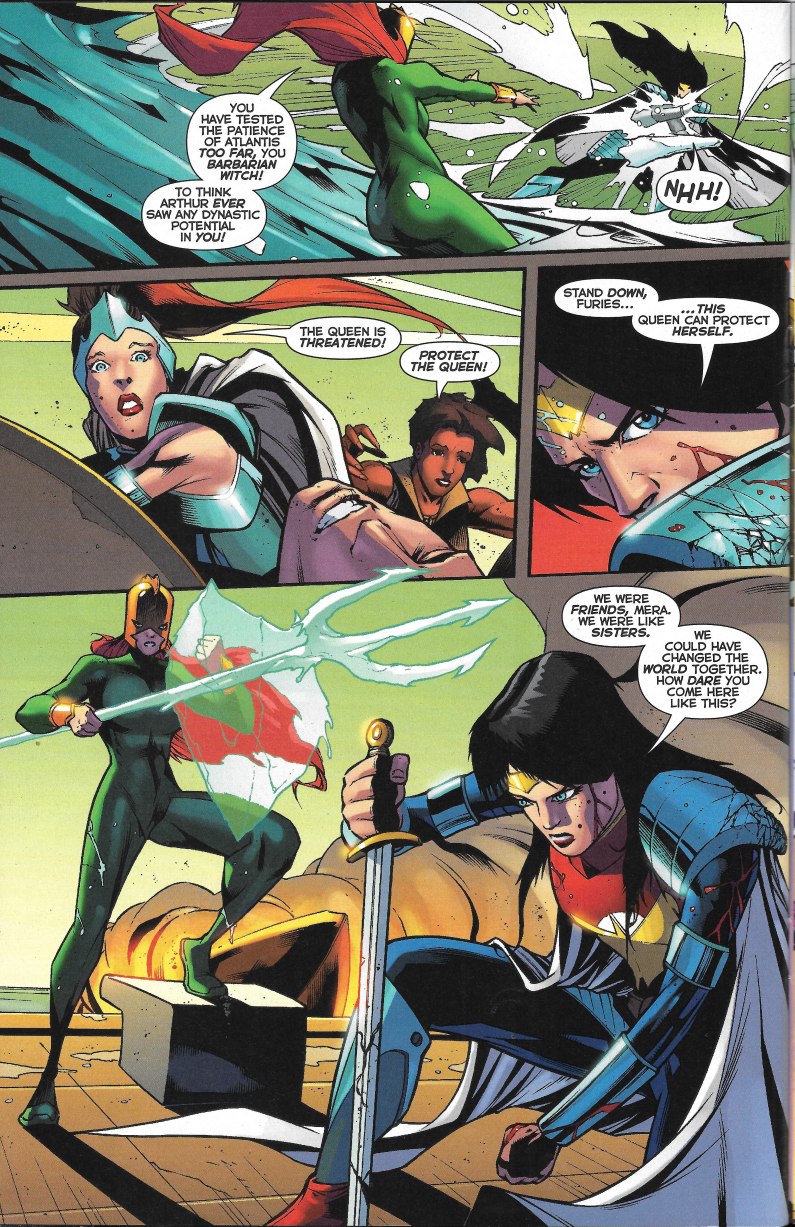 Mera splashes Wonder Woman around a bit, then forms weapons out of water. 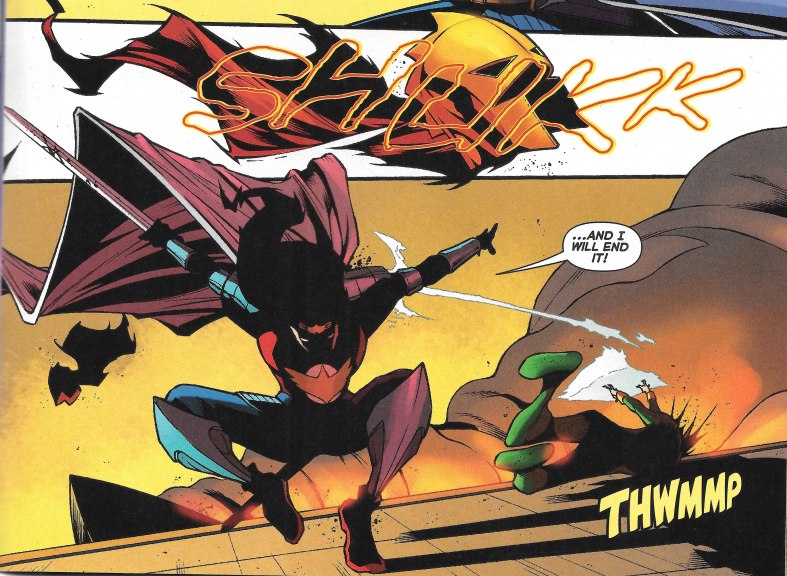 And then Wonder Woman gets serious and beheads her.

And then puts on her helmet just to piss Aquaman off… 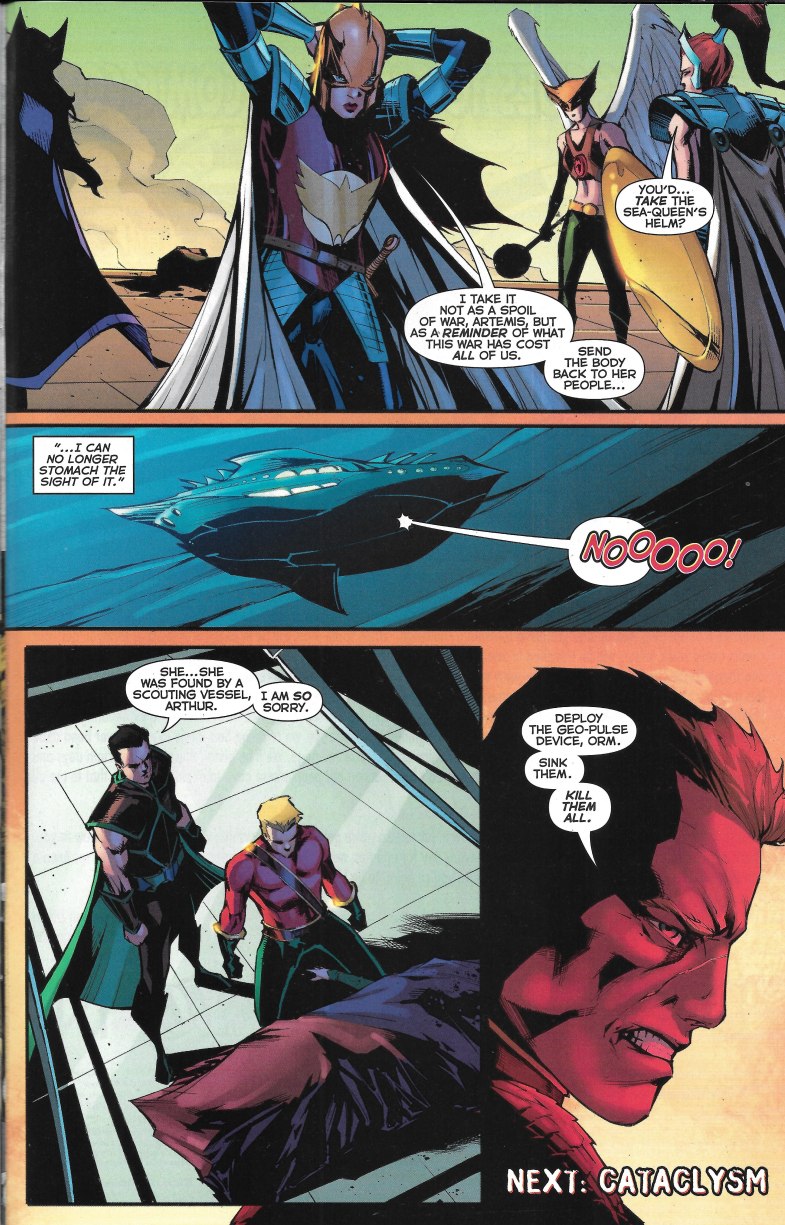 The story isn't all that bad, but the art is painfully under the bar of last issue's high mark. This should be the best book in the series as it doesn't have to build up to anything, the conflict is already present. The writers are doing their part to make this epic, but what's on the page doesn't convey it quite well enough. We will see how next issue wraps everything up…for good or ill.
Posted by SonOfCthulhu at 3:19 AM