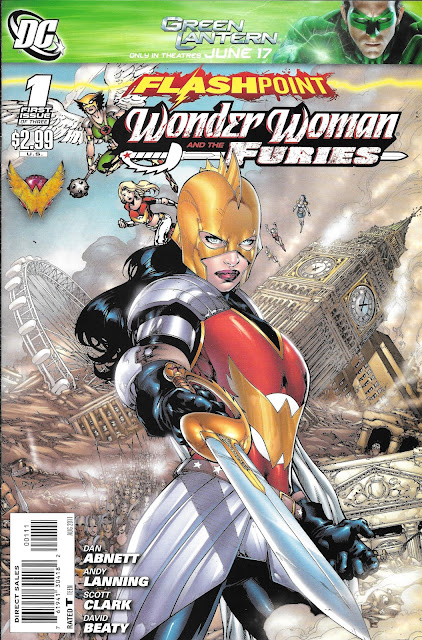 Giving us a more relatable take on our Warrior Amazon

Seriously, you didn't think I'd pass over Flashpoint did you?

I mean Wonder Woman is integral to that saga is so many ways. There will be spoilers if you don't already know, because as we go through these you will most certainly find out.

As for the Flashpoint event itself, DC needed a reboot and this is the best they could come up with. Throw their best creative force (Geoff Johns) behind this monster and hope it worked out for the best.

No, I'm not even sure the reboot was all that necessary, seems the big two followed each other's marketing adverts when it came to things like huge events. Marvel and DC both trying to outdo the other on every level with each crossover that was thought up. Look at Secret Wars vs Rebirth, two further reboots of each company's universe that occurred a few months apart. Although there are parts of Secret Wars that more closely match Flashpoint, namely in the cancelling all the titles and creating a new continuity for existing characters that only lasts as long as the event.

In Flashpoint the most ridiculous thing changes the entire universe.

Barry Allen (the Flash), who had been recently resurrected himself, tries to solve the puzzle of who murdered his mother when he was just a boy. He seeks to exonerate his Father, who has been incarcerated since then. What he finds is that the Reverse-Flash (Eobard Thawne) went back in time and murdered his mom and framed his dad. Barry time-travels to the past to catch him and ends up defeating Thawne before he can kill Barry's mother.

And killing Barry's mother is an event of such momentous portent that it screws up every-living-thing in the entire DC Universe.

And I do mean everything.

Even things that there is NO way possible for her to affect.

Because Barry's mom doesn't die, Bruce Wayne is shot dead in an alley. His mom is driven insane and becomes the Joker. His dad goes the opposite way and becomes Batman.

Because Barry's mom doesn't die, the rocket carrying Kal-El strikes Earth, not in Kansas, but dead center Metropolis. He is never adopted by the Kents and spends his life buried in an underground government testing facility, unable to access any superpowers because he is kept out of direct sunlight.

Because Barry's mom doesn't die, Cyborg takes on the duty of protecting the world. He fails to form the Justice League after Batman backs out, and a majority of other heroes decline as well.

Because Barry's mom doesn't die, Abin Sur is rescued by Cyborg and taken into custody instead of dying. Abin Sur remains the Green Lantern.

And LOTS of other amazingly UNCONNECTED stuff.

As you can tell, I'm not just skeptical about how all this could come from Nora Allen's death, I'm downright incredulous. No way Nora being alive can shift the paths of plummeting rockets and the track of bullets in flight. That's just…silly.

Just as silly as Nora existing somehow causing the chain of event shown in this three issue mini. A miniseries that is both as integral to the backstory to the Flashpoint universe as it is totally unaffected by anything done by Nora Allen's non-death when Barry was in grade school.

Since Wonder Woman and Aquaman are the beginings as part of why the Flashpoint universe is headed for an early death, it is important to fill in how this came to be. So let's do just that, beginning with their first meeting. 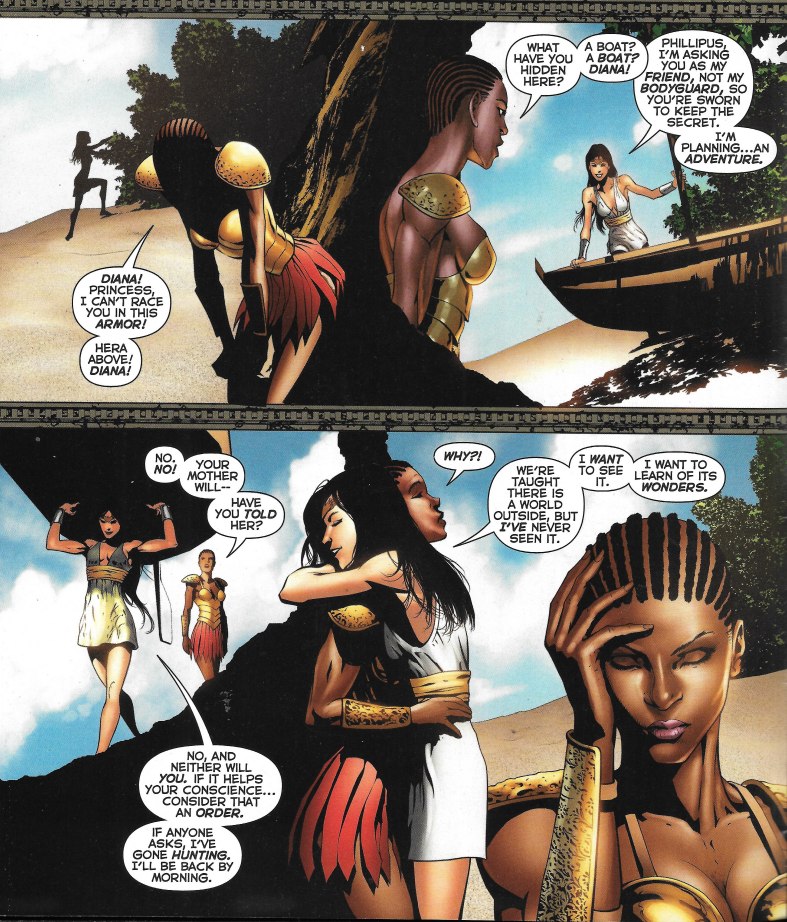 We begin on Paradise Island fourteen years ago with a barely teen-age Diana deciding she wants to see more of the world. She tells only her best friend Phillipus her intentions and then off she goes, sailing away.
Whispering "Poseidon protect me," over and over again, she is almost immediately hit by a cruise ship, sees a passenger jet, and then is attacked by Cthulhu. 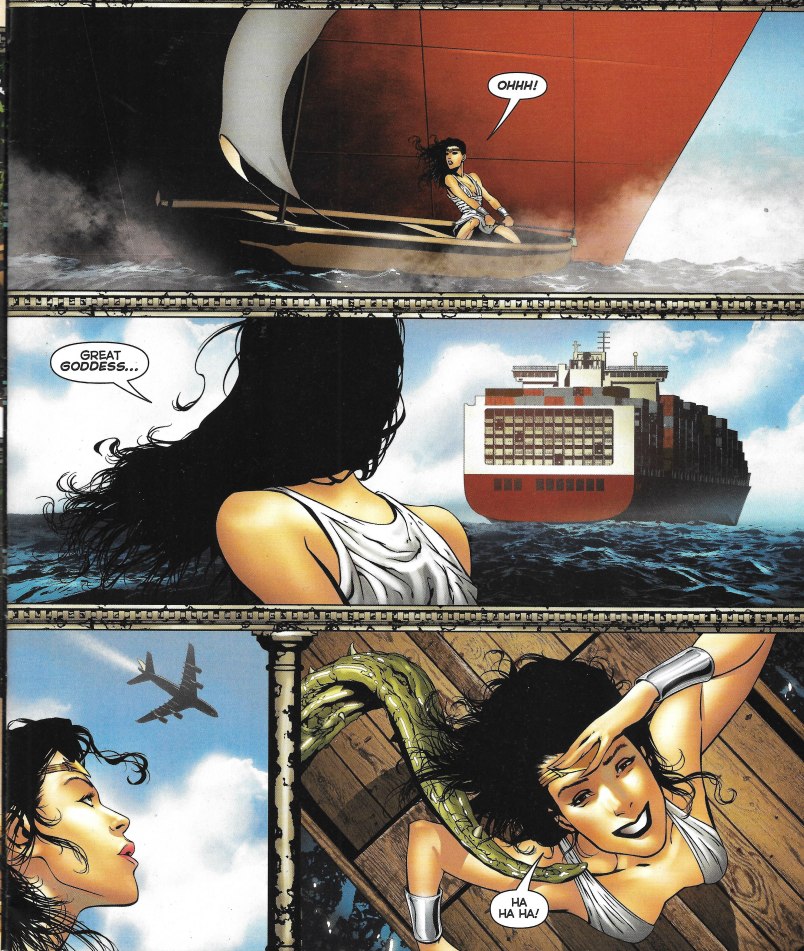 No, seriously. She's attacked by Cthulhu. 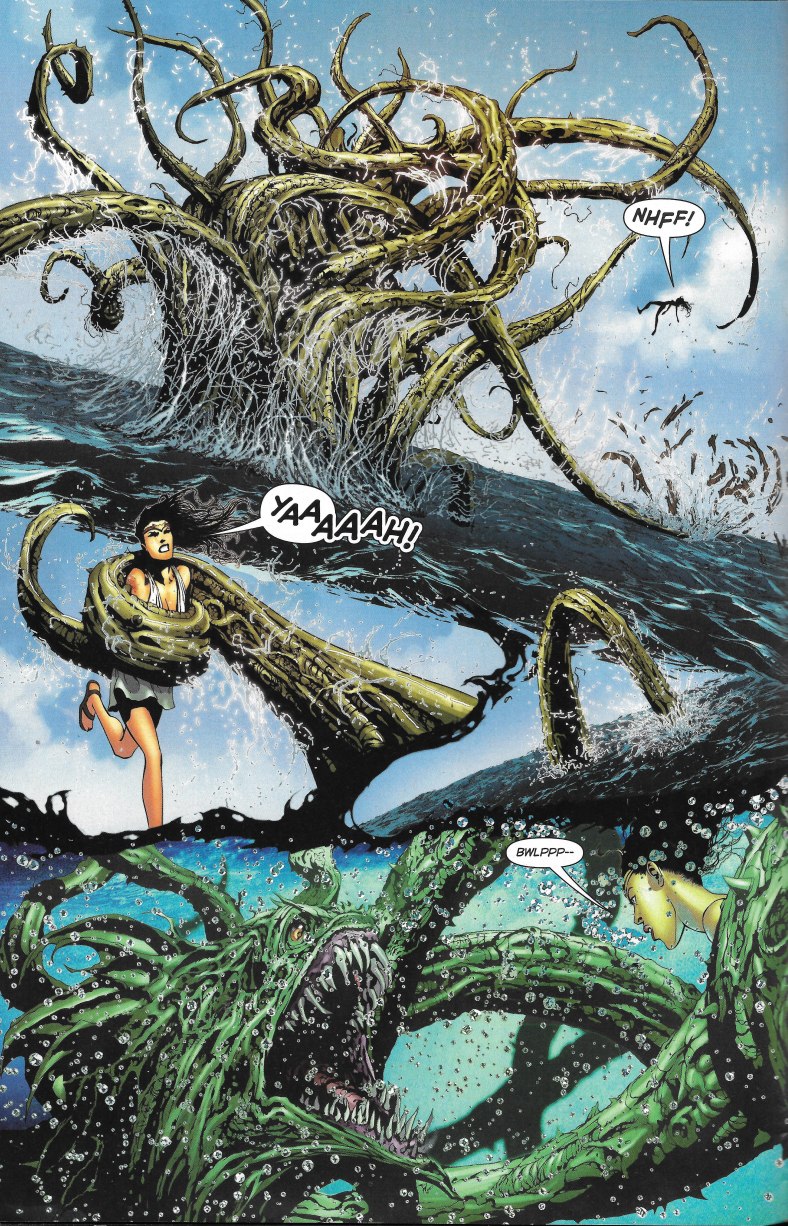 And it is at THIS point that I have to question Mr. Geoff Johns, who came up with very IDEA of Flashpoint, how were Messer's Abnett and Lanning supposed to make this tie into Barry's Mother somehow? What butterfly effect Nora Allen's breathing could cause Diana to take a boat out at this moment? Or by her being alive, did that somehow enrage the tentacled beast we see attacking Diana next?

It wouldn't matter so much except THIS is the story of the central conflict that tears the Flashpoint Earth asunder, both figuratively and literally.

So anyway, Aquaman shows up with his tiny spear and kicks Cthulhu's ass. 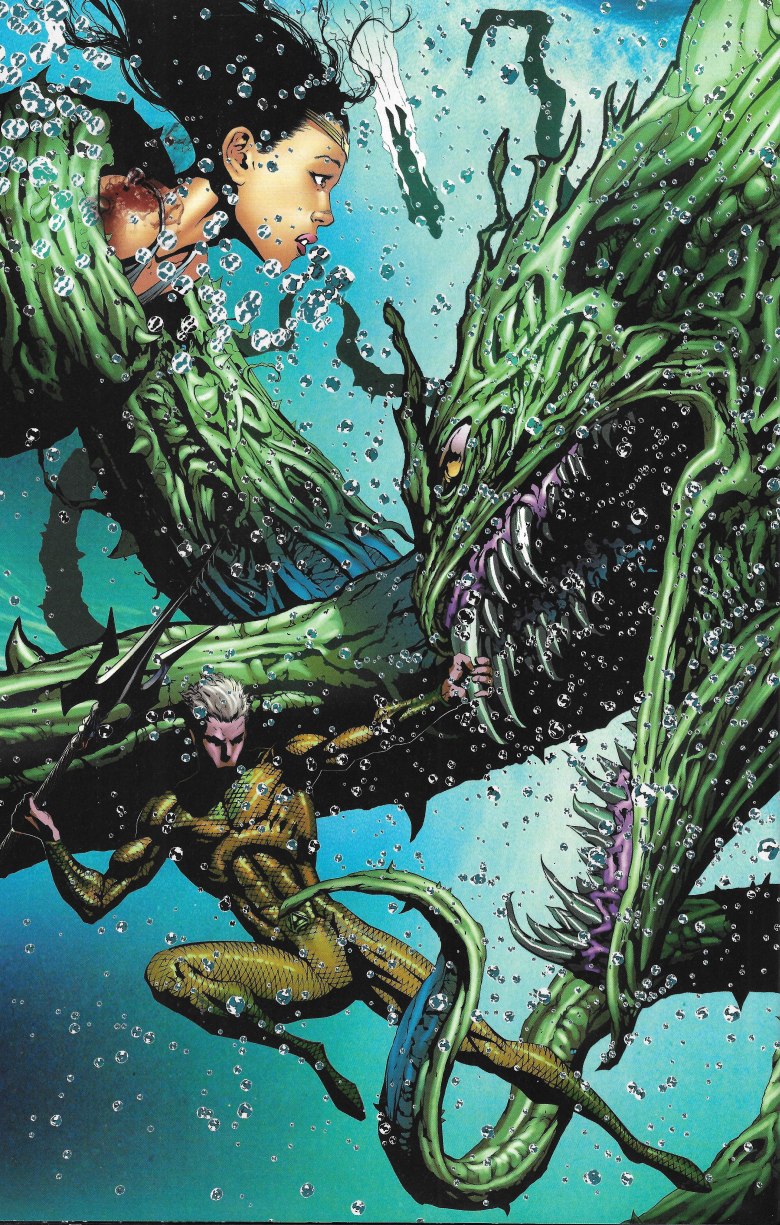 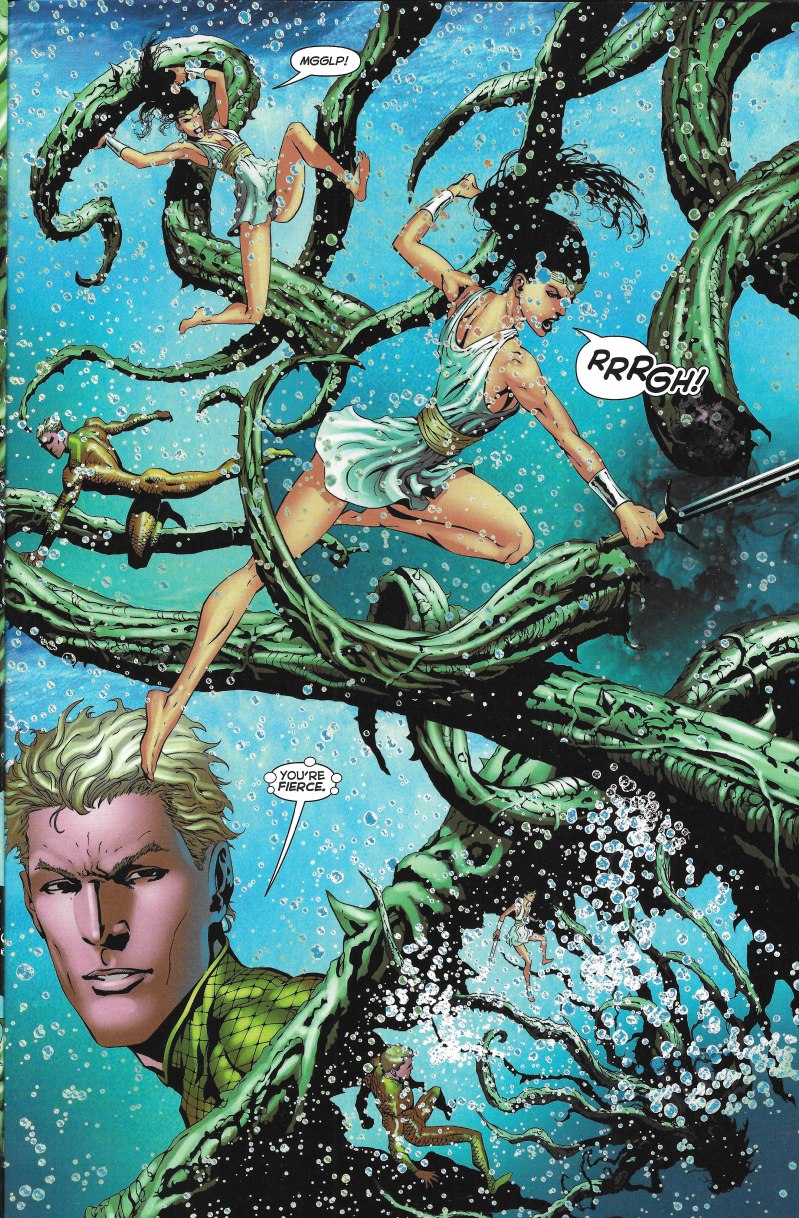 However, when it's all over she's still in need of some saving. Appears the Kraken they were fighting had poisonous tentacles. 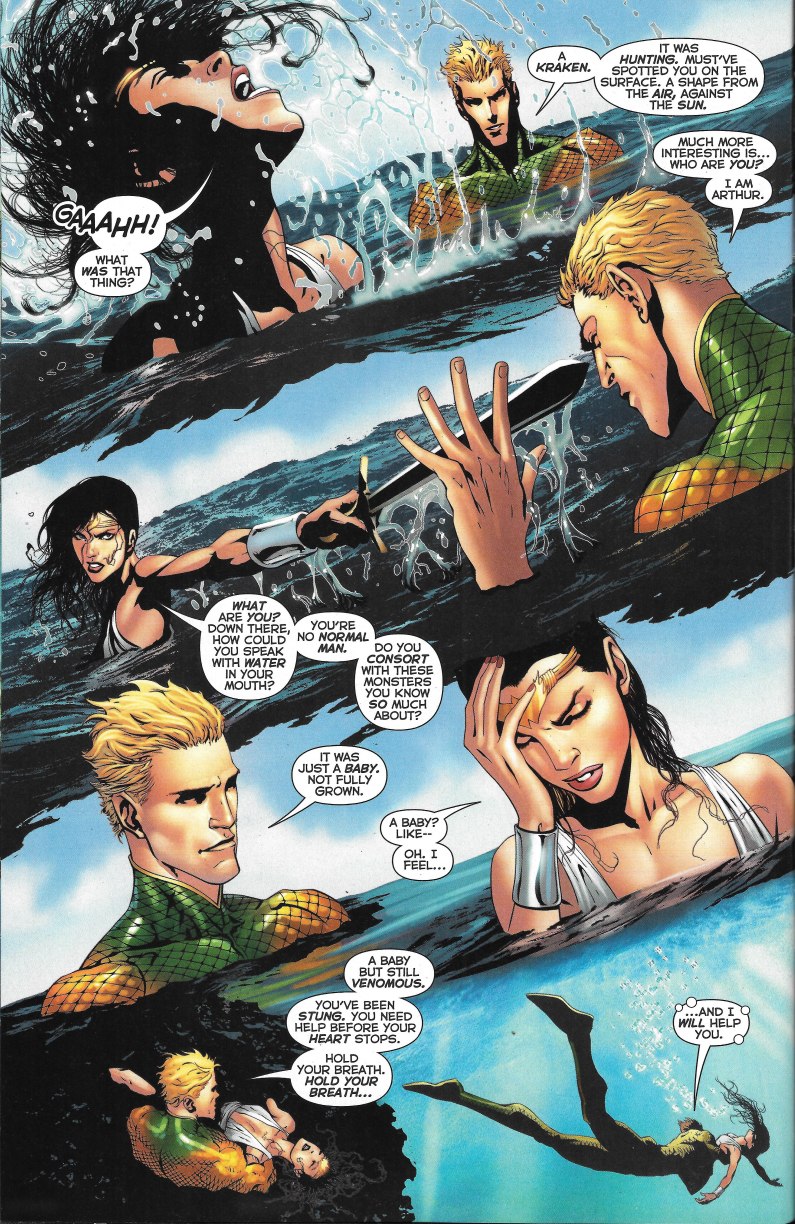 Aquaman rescues her using the resources of Atlantis, which is rendered here in all its glory. 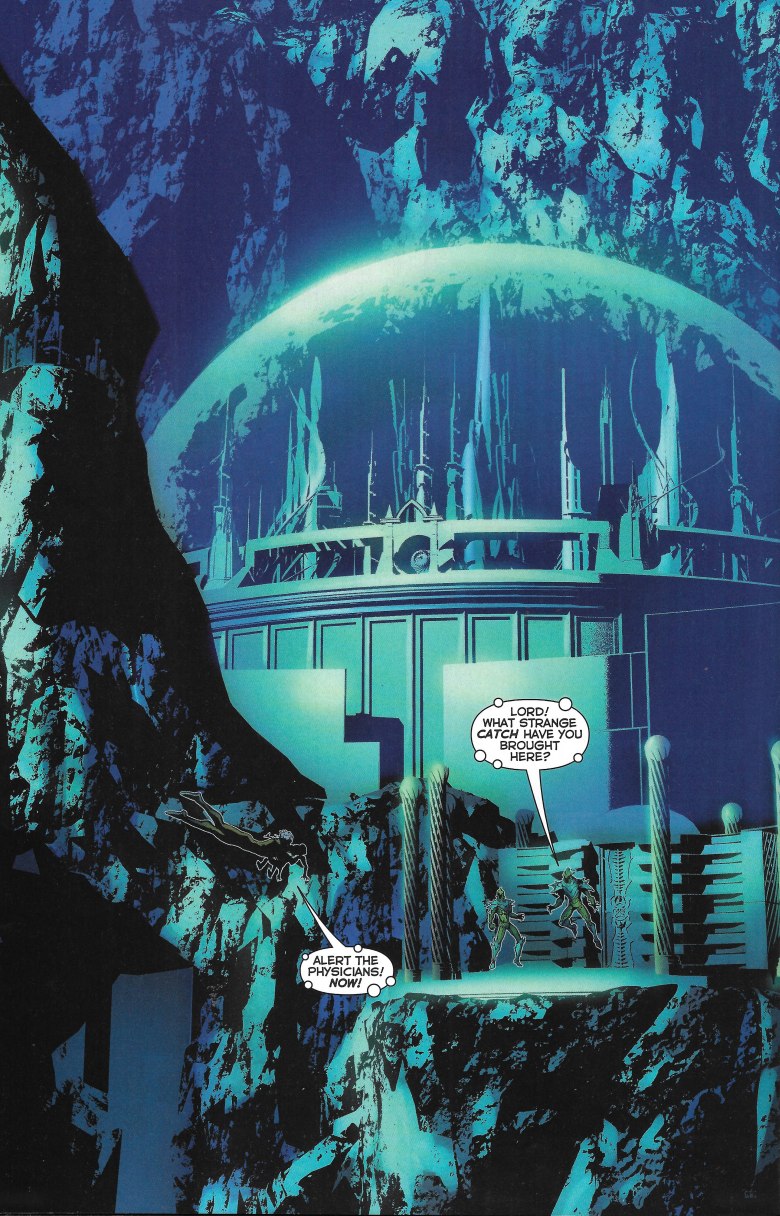 One month later, Diana gets returned to the Amazons by Lord Orm (Ocean Master) and a pre-Aqualad Garth - who, after an initial skirmish with the warrior Penthesilea, are allowed to deliver the girl unharmed. Everyone appears to be making nice-nice. 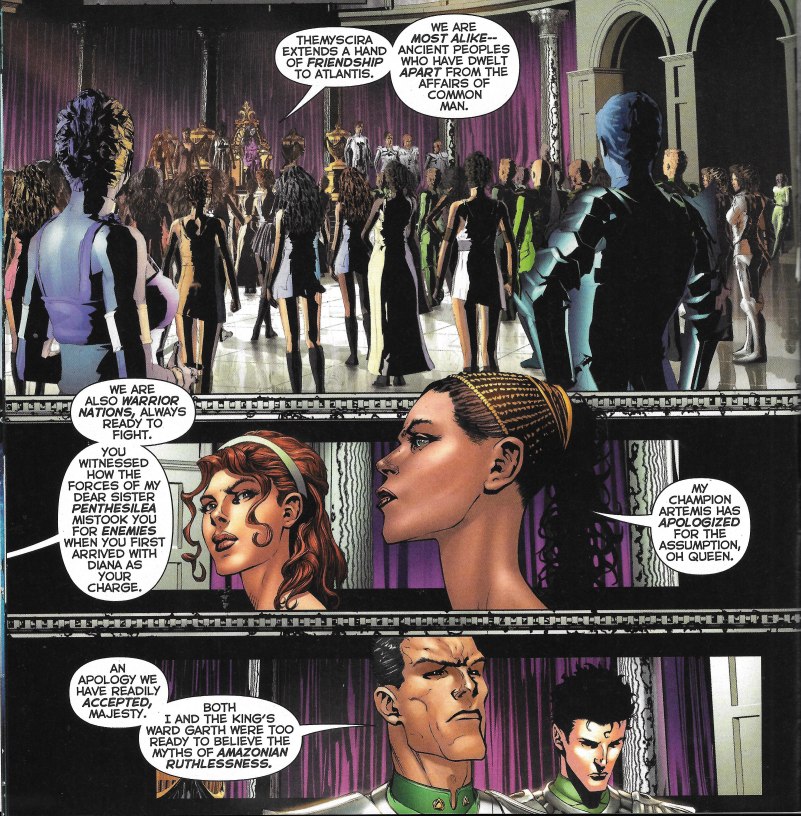 In fact, Aquaman Arthur and Wonder Woman Diana decide to create an alliance in the way that most feudal kingdoms did while also announcing the presence of both Themyscira and Atlantis to the outside world. They announce they will be wed to unite their peoples. Hardly seems like two individuals so selfless and amiable will turn into world-destroying enemies, but keep your eyes peeled here. 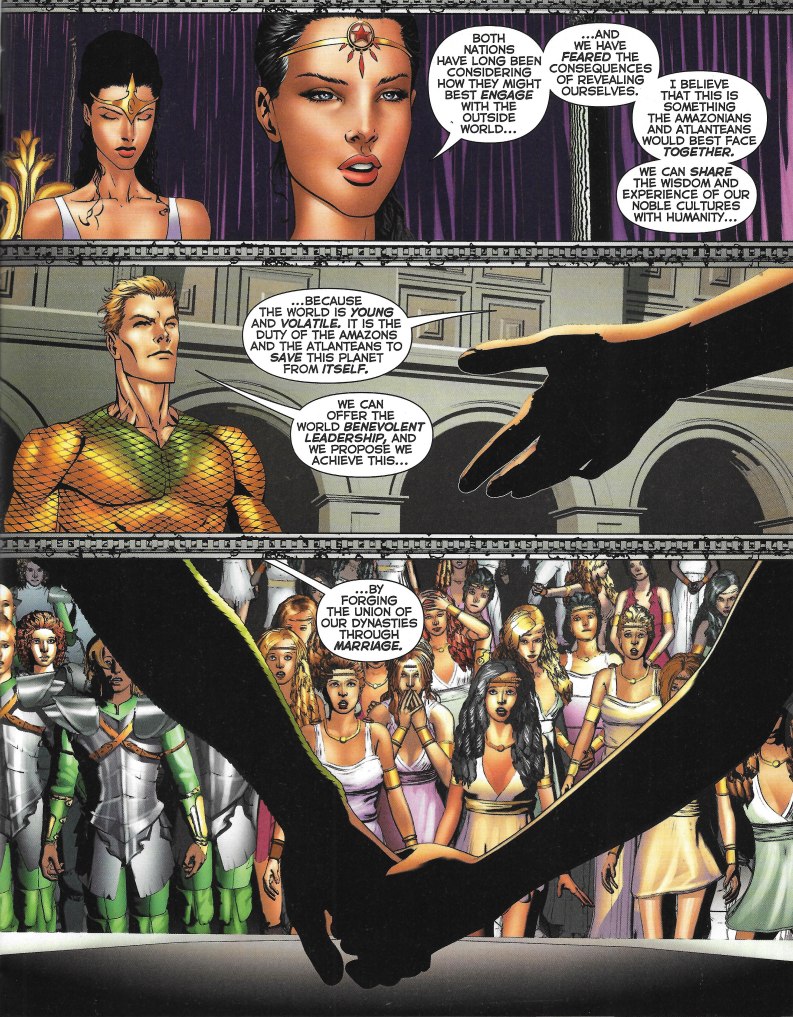 We skip forward to one year from the date of the Flashpoint miniseries, with Arthur being led to the altar in view of all the world by Lord Orm. 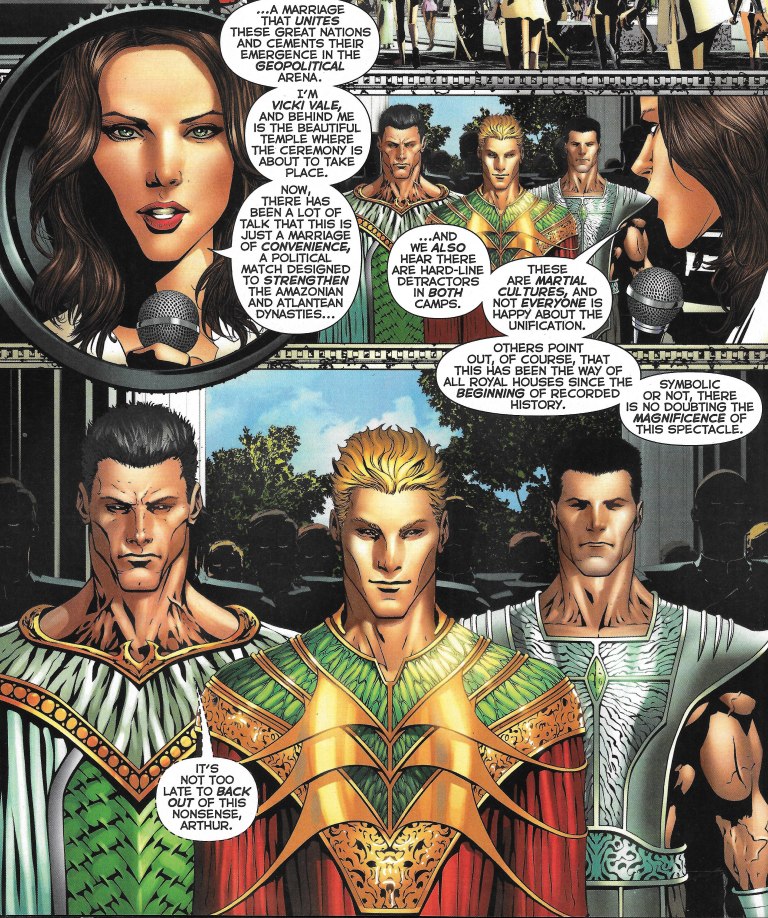 Orm does voice some reservations to this marriage of convenience. Diana's mother states just the opposite. She is proud of all her daughter has accomplished for the Amazons, the Atlantians and the world. However, the Themysciran contingent has their own detractor in the form of Penthesilea. 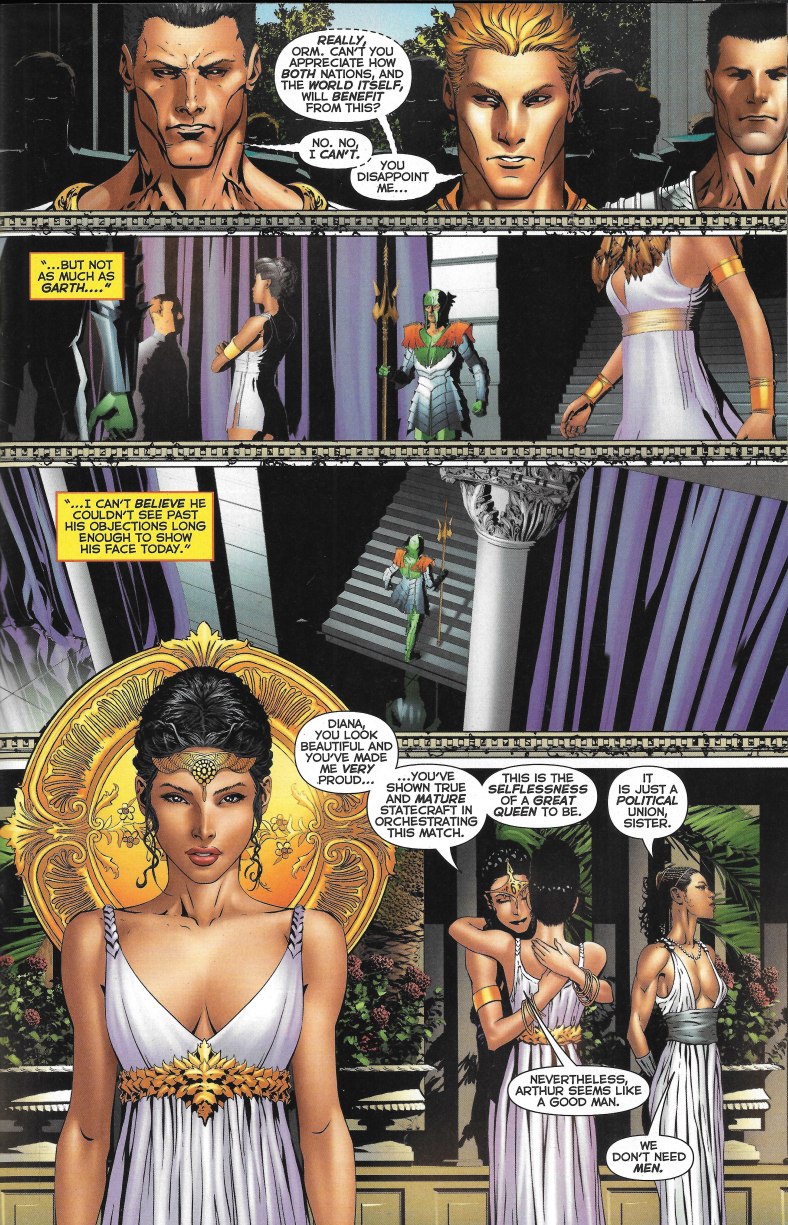 Also, there appears to be a shadowy figure in Atlantian armor viewing the proceedings over the unconscious bodies of two Amazon guards. 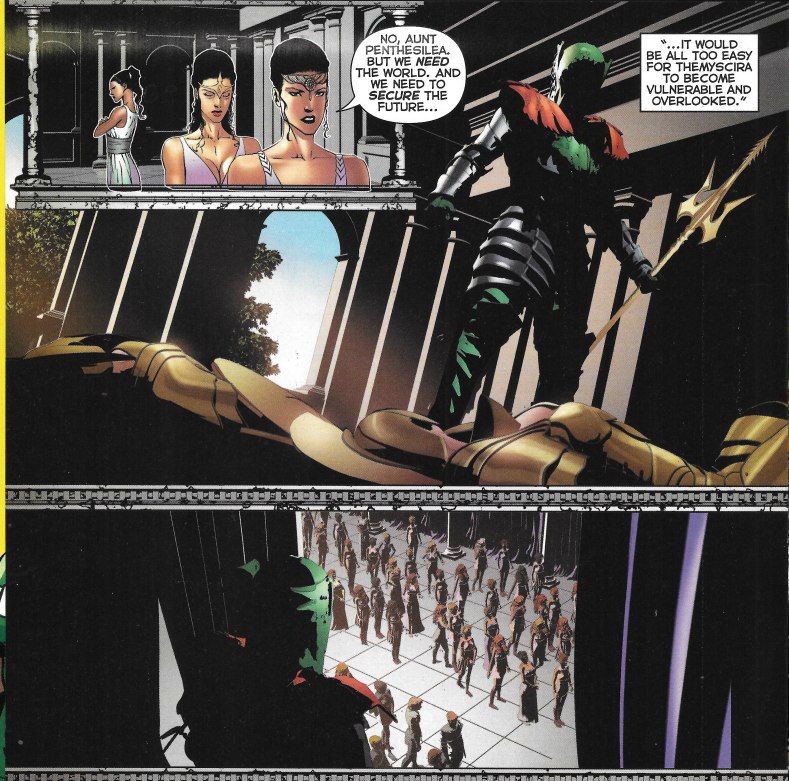 That can't be good. And indeed it isn't, as the couple are standing together the armored figure throws a spear… 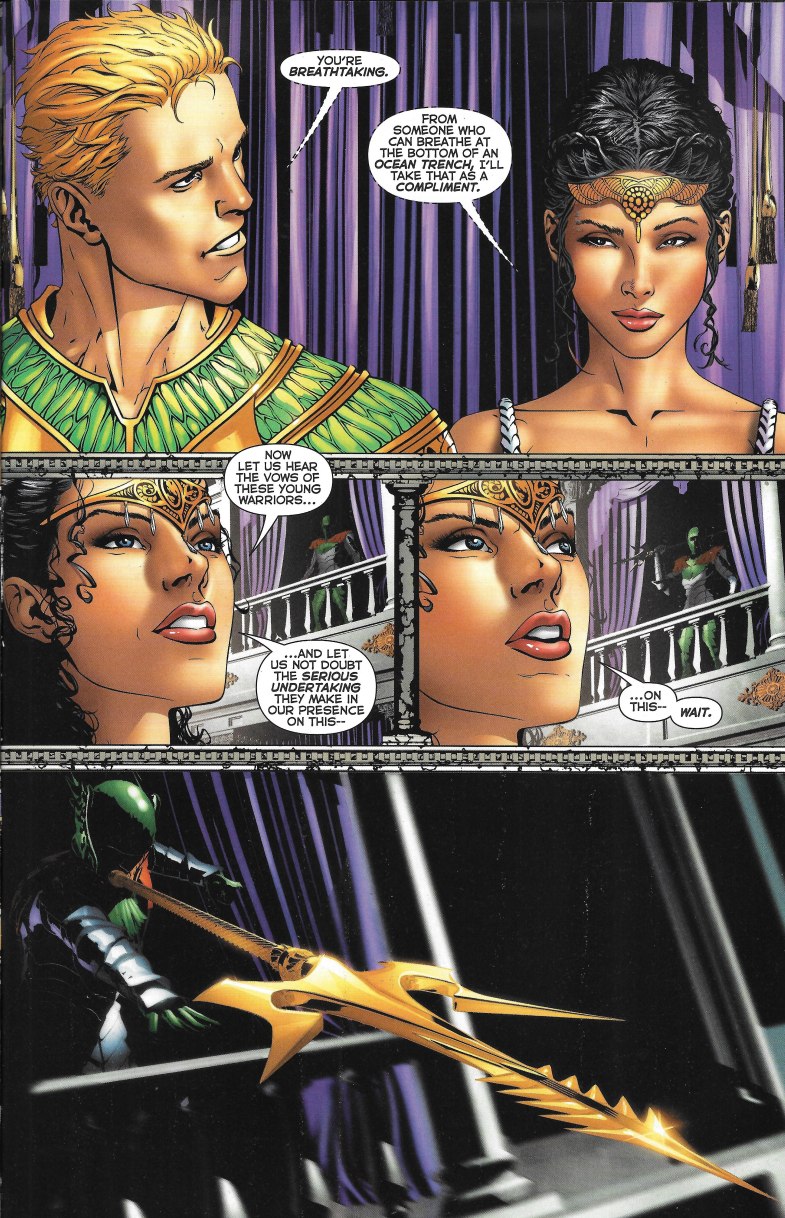 …and Hippolyta pushes Diana out of the strike zone, ending up impaled herself. 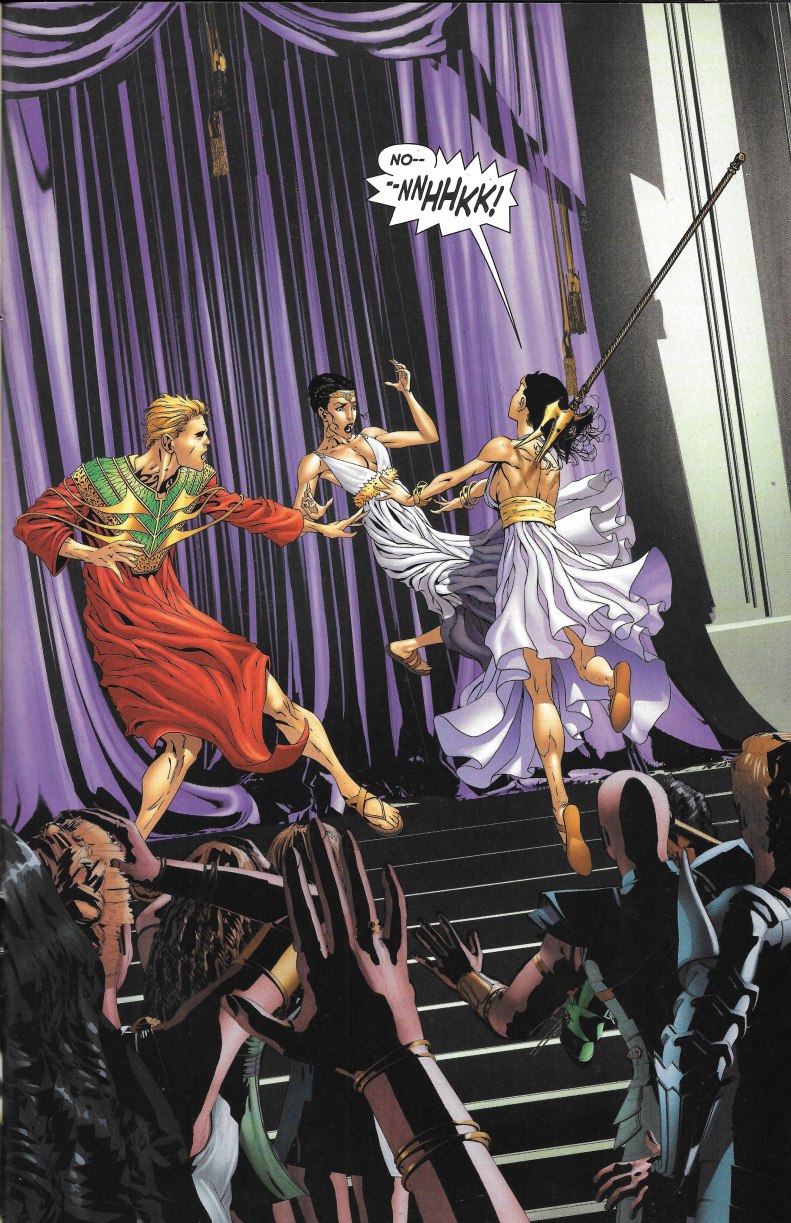 Happening in plain sight of everyone, the death causes a huge outcry. The figure ducks behind the curtain to remove the armor when he is suddenly decked… 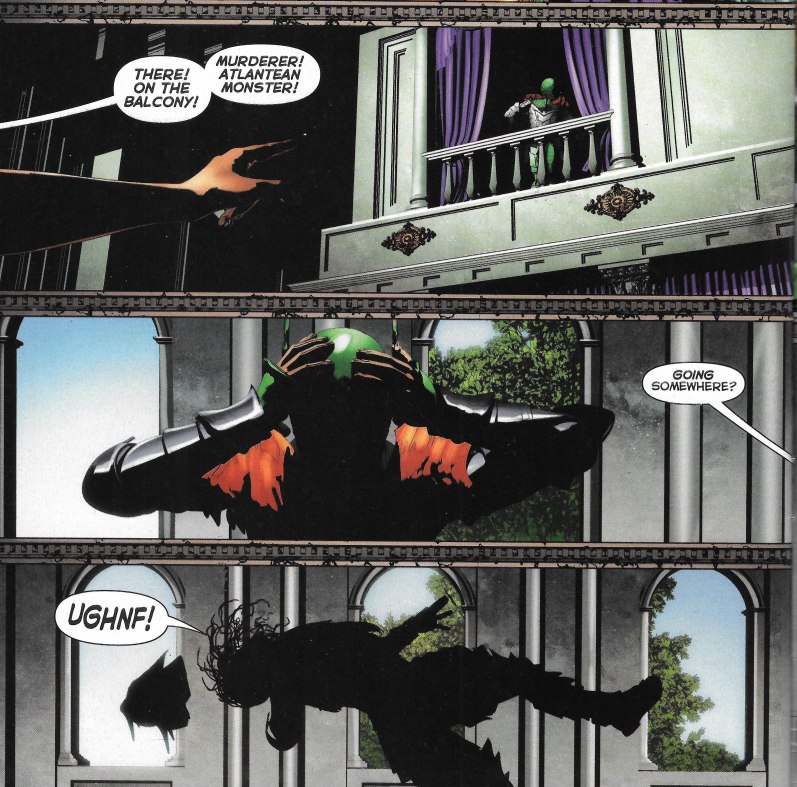 …by Garth, who we thought would turn out to be the spear thrower. However, it is the Amazon Artemis in disguise instead. You'd think getting the drop on an Amazon warrior would count for something. 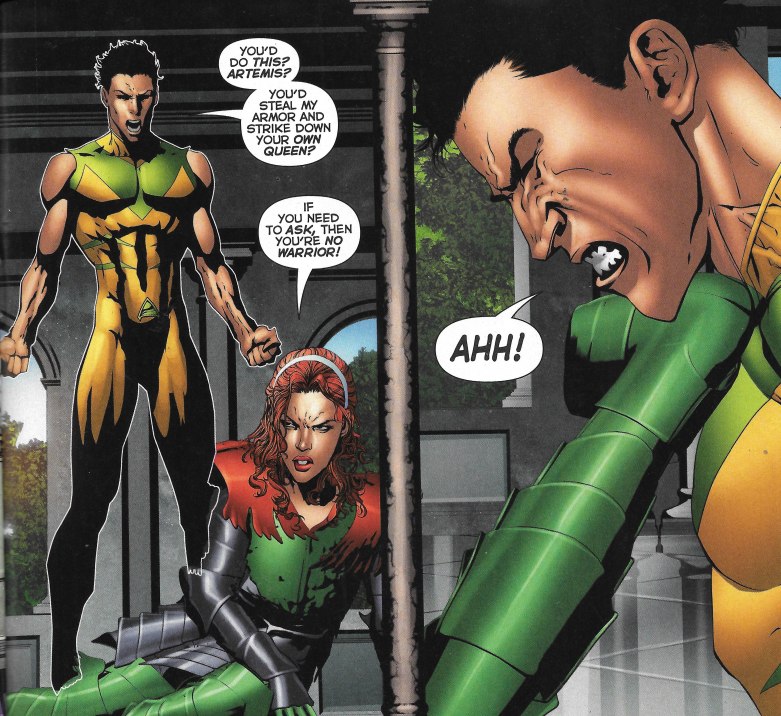 …but you'd be wrong. Dead wrong. 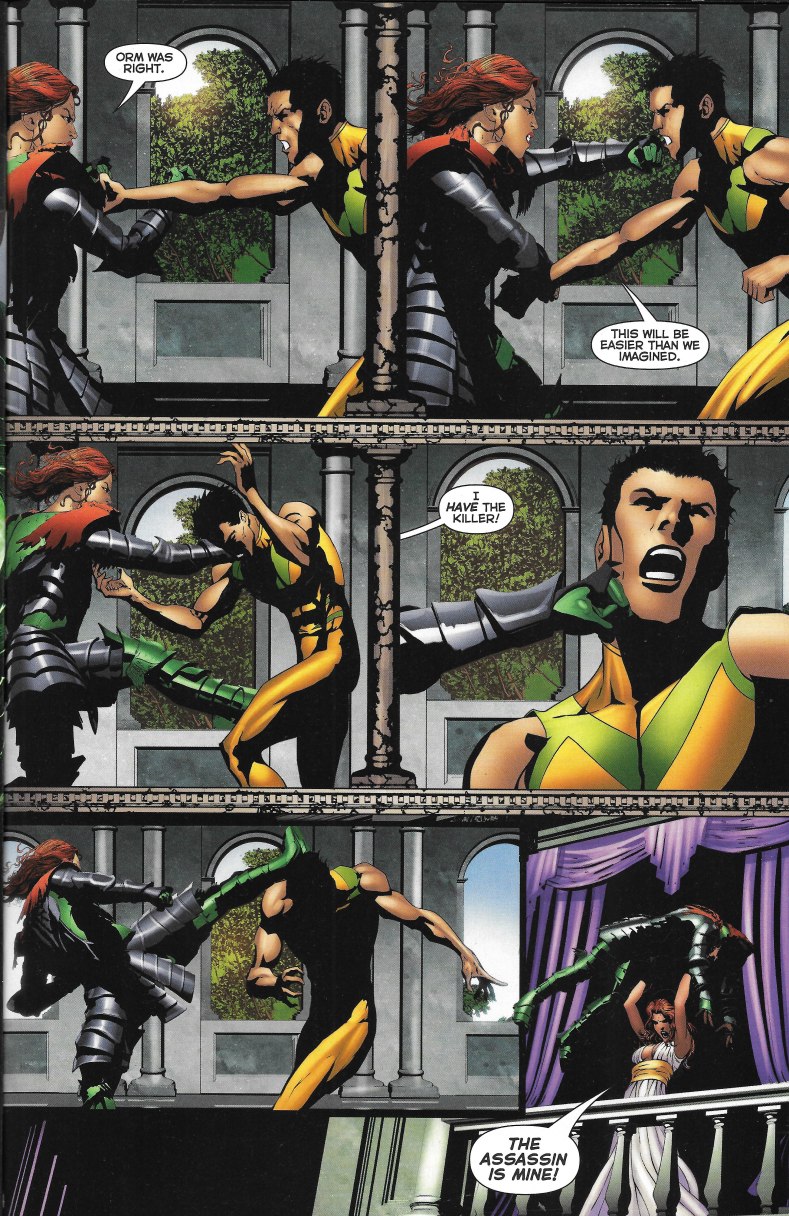 As dead as Garth ends up here, when Artemis kills him and then quickly stashes his dead body in the armor she was wearing. The final indignity being tossing his fatally wounded body off the balcony stating that he was the killer. 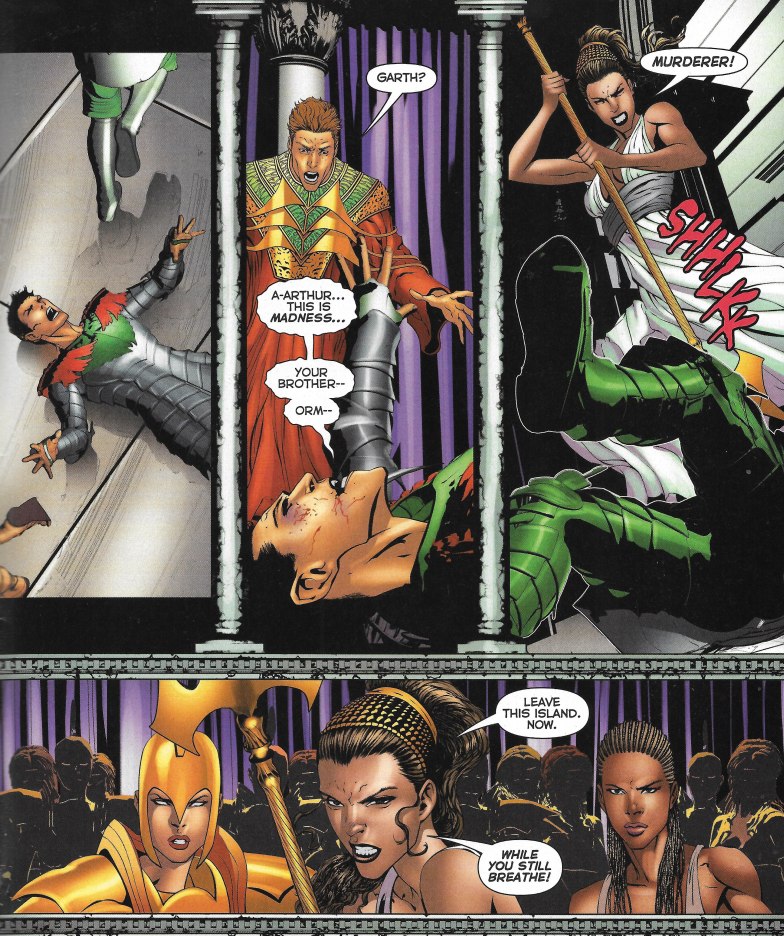 Awfully fast change of clothes there on both their parts for this to happen.

With Garth's last breath he tries to warn Arthur about Orm, but he quickly gets the stabee-stab-stab treatment by Diana. Then she orders everyone off the island and the stage is set for lots of bad things to start happening. 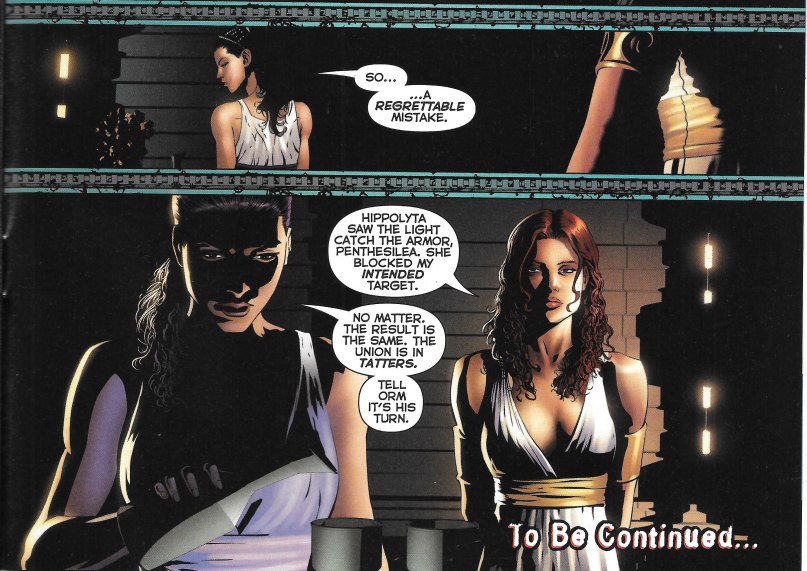 In the end we see Artemis meeting with Penthesilea, with both of them implicating that Orm will do something similarly horrible to Arthur where blame can be placed on the Amazons.

Neat story so far. Clever heroes and dastardly villains working behind the scenes to unseat them. Not only that, the characters are all relatable and we find ourselves invested in how this will all turn out.

But no way is this Nora Allen's fault.
Posted by SonOfCthulhu at 3:38 AM