Taking a break from the Wonder Woman coverage to bring you this: 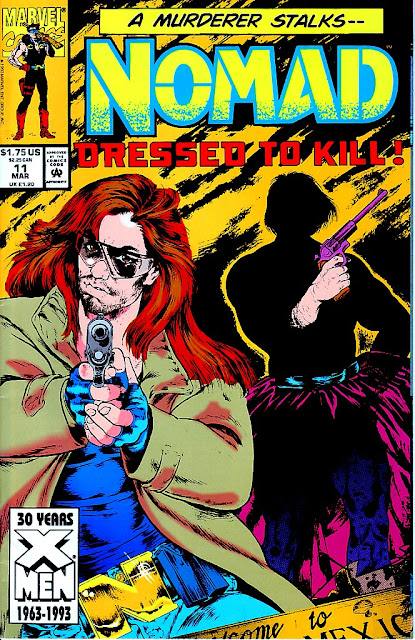 Wait! Why is this in this section again?
And how does it tie into Father's Day?

Fabian Nicieza took the Nomad/Jack Monroe character down some paths seldom tread in comic books. I don’t just mean by having him homelessly ramble from town to town across the South-Central part of America, either. Nicieza liked to deal with topical social issues, using them as jumping off points for his stories. He’d deal with groups outside of societal norms in an attempt to comment on culture and public opinion. How does any of this relate to our Fairer Sex thread?

Well let’s start off with a joke: So Nomad walks into a bar… 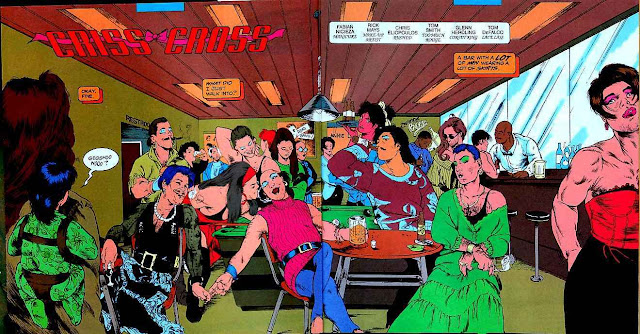 And it just so happens that tonight is the once a month meeting of the Flatsies. Just what are Flatsies? I’m so glad you asked… 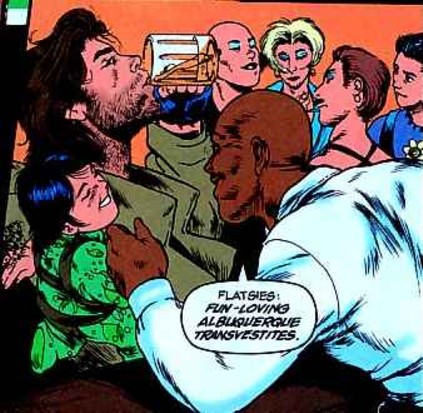 So what’s a guy with an underage toddler in a bar full of men dressed like women supposed to do? Why he orders himself a drink and gets the bartender to heat up the baby’s formula, of course. Happy Father's Day, everyone. In a real mind messer-upper, Nomad finds himself attracted to this young…lady? 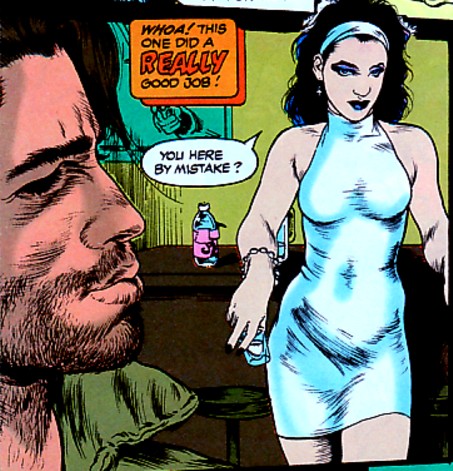 Stop the “Crying Game” music from going off in your head. She’s really a she! I was afraid how far off the beaten track Nicieza was going to take Nomad. I’m not too sure how I would handle finding out Captain America’s ex-boy partner Bucky grew up to become a gay guy. Mainly because it might tend to shade their activities together as not the wholesome PG adventures I read as a child, especially what with all the current hub-bub about giving Cap a boyfriend. Sort of the same thing applies to Batman and Robin. Not to worry, this chick is really a chick who is there with her husband. 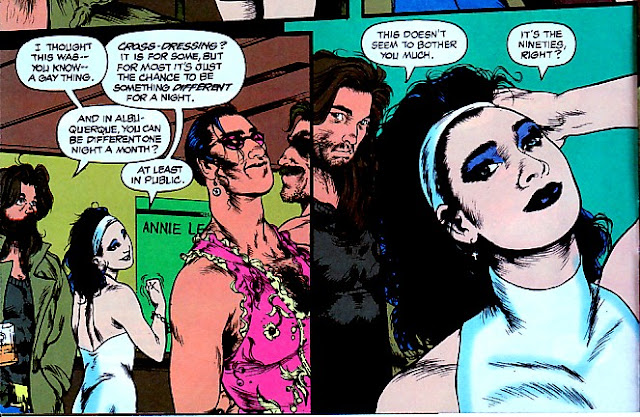 *Tries to remember this part of the Nineties. Fails.

Moving along, there isn’t much for a homeless superhero to do in this story so far. So Nicieza decides to spice things up by throwing in a killer that is stalking the drag queens. He even gives Nomad a likely suspect in the killings. 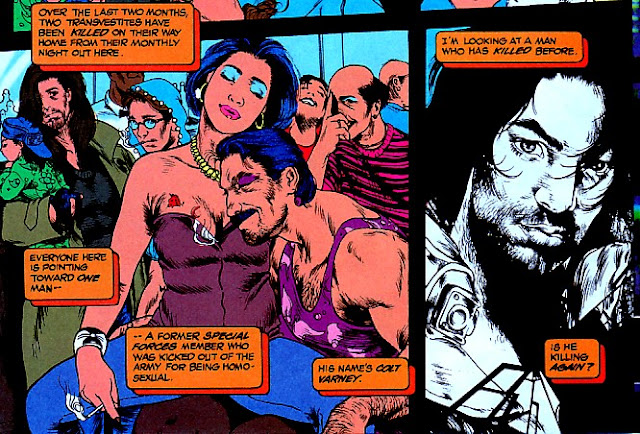 “Duh-Dun-Dun!” Pretty ominous foreshadowing there. Also very ominous eyeshadowing too. Unfortunately Colt is such an obvious red herring that it is no surprise when Nomad discovers him two pages later brandishing a gun while standing over the body of a newly murdered Flatsie. You don’t have to be Scooby Doo to figure out he ain’t our killer. Heck, we’re only seven pages into this train wreck at this point. 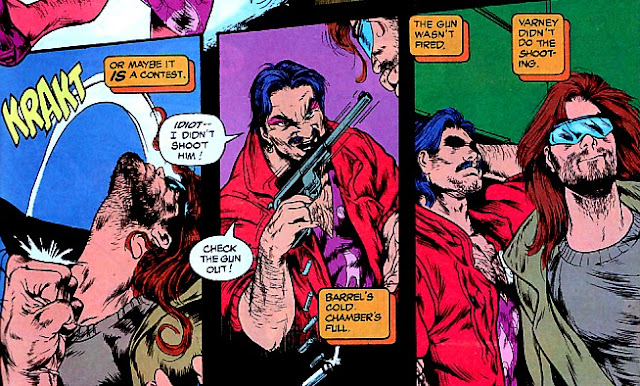 The cops check things out but seem to be disinterested in doing anything about this latest murder in a string of related killings. That’s when the hottie’s husband shows up. He asks Nomad for a private meeting at his office and gives the wandering hero a business card. 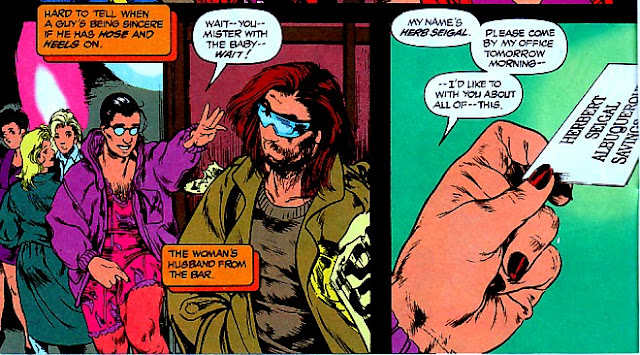 I know that the letterer just missed a word here, but I find it very eerie that the last part of that balloon seems to be missing a verb. “I’d like to (sic) with you about this.” My fertile imagination can insert all sorts of things Herb would like to do with Mr. Nomad. Happily none of those apply. Herb just wants the killer “exterminated” or forced to leave town. He’s not interested in the publicity a trial would bring. Nomad flatly turns down being the group’s hitman, but says he will investigate the killings to see what turns up.

Unfortunately all his investigating does is lead back to Colt. So before next month’s Flatsies meeting can occur, Jack decides to pay him a little visit. He starts by kicking in Colt’s door. 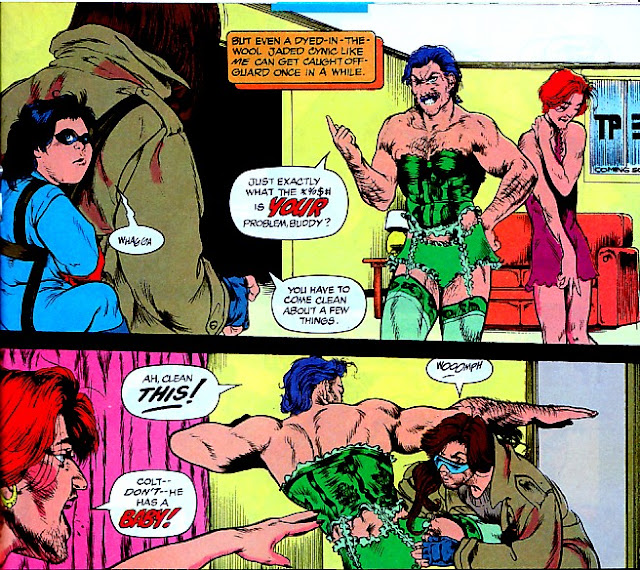 Then he starts beating Colt up in front of his boyfriend, which is a serious blow to Colt’s manhood. Possibly more of a blow than the lime-green stocking-garters-bustier with heels ensemble that Colt is wearing. This “Victoria’s Secret” should have stayed that way.

Anyway, it turns out that Colt has been shadowing the killer’s movements since the very beginning. Seems the first victim was Colt’s lover and he’s holding something of a grudge. Nomad and Colt kiss and make up (figuratively! FIGURATIVELY!) and decide to work together to solve the case.

With the next meeting of the Flatsies only days away, the pair implement a bold and daring plan. First, Nomad… 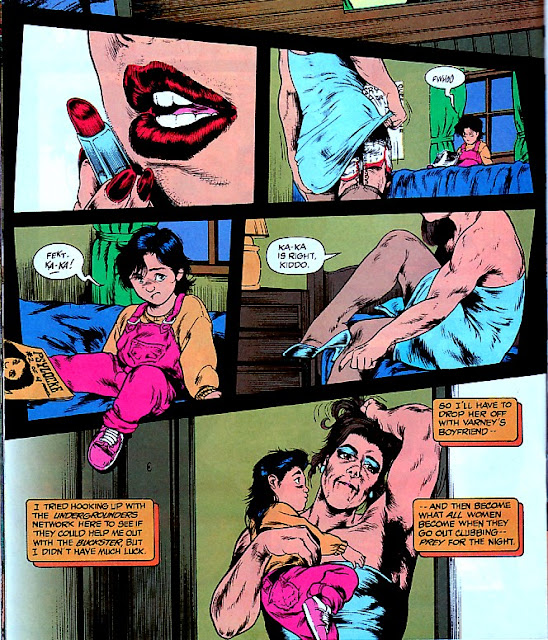 …dresses up like a woman. Oh, if any series of panels deserved a facepalm, these would be it.

The next part of the operation involves Jack shaking his stuff at the Flatsies bar in hopes of attracting the wrong sort of attention. So off he goes to strut his stuff. 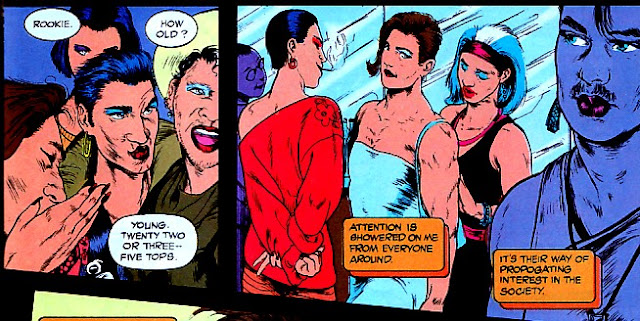 Wearing a look that says “fresh meat”, Jack finds himself the center of attention at the bar. Guess he’s a natural. The story focuses so much on the bar it makes me wonder in the 90's which restroom would the transvestites use. Men? Women? Whichever’s unoccupied?

Don't get me wrong, that sounds like a hell of a benefit. My money has always been on Unisexing everything anyway. I mean parts is parts, right?

My speculation must end as Jack bumps into a very dense Herb, who doesn’t recognize him. 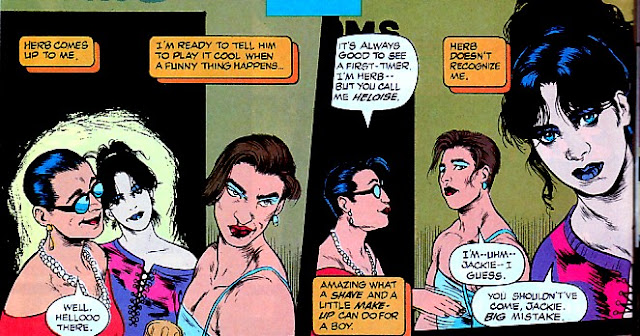 Herb’s all over Nomad like Trump on an illegal alien. He’s also an octopus who won’t take no for an answer. Perhaps Herbie has been bitten with the love bug. It’s not wise to rile up a former Super-solider, however.

Guess the drinks are on Herb tonight. 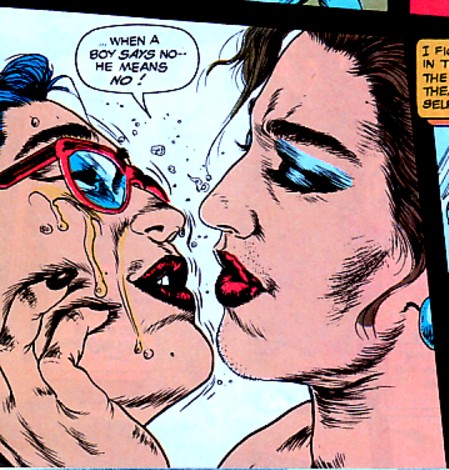 So keep your damn paws off, fella! All this upstaging of the other queens in the room leads to the killer targeting Nomad. As he exits the bar, he’s in the crosshairs of a sniper. Luckily our ex-special forces, ex-prime suspect is there as backup. 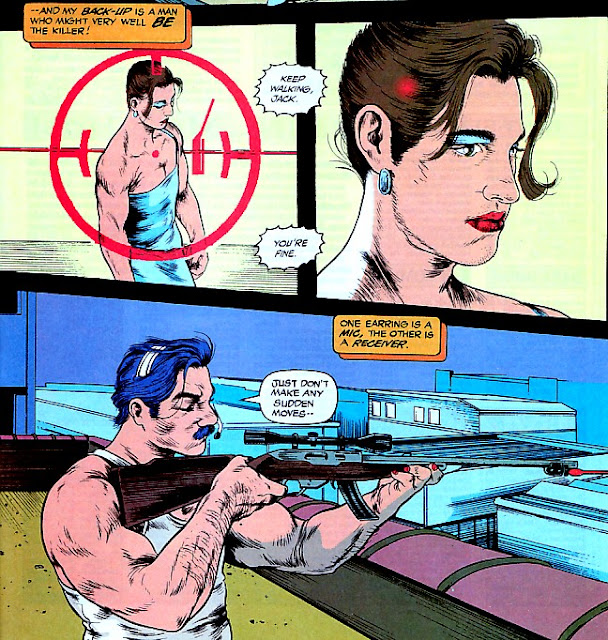 So the sniper is wounded by Colt but makes a run for it. Jack takes off in hot (as in fashionably hot) pursuit. He catches the bad guy who turns out to be… 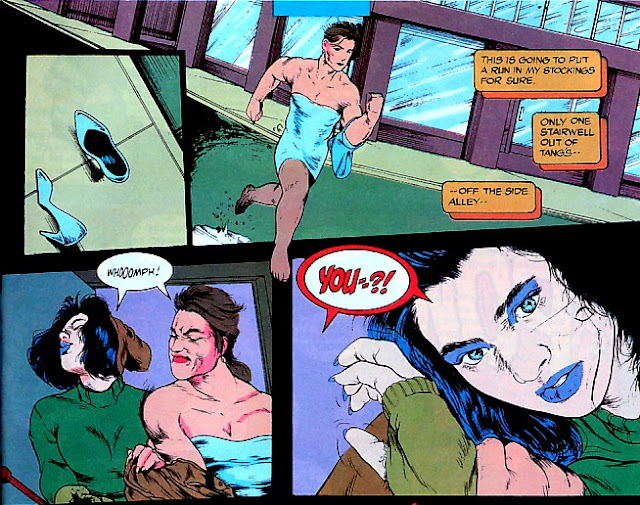 …Herb’s wife, who is so jealous that she’ll kill anyone that would even flirt with her cross-dressing husband. And she’d have gotten away with it too, if it hadn’t have been for those meddling transvestites and their darn toddler. Jack reacts to the news with a B I T C H slap to end all bitch slaps.

Unfortunately she still has time to draw down on poor defenseless Nomad, forcing Colt to shoot her dead. Wait, didn’t Nomad train with Captain America about avoiding bullets and stuff? Oh, well. I guess it doesn’t matter now. She’s dead. The only straight female in the whole magazine and she turns out to be a killer psychopath.

Nomad does leave us with this little tidbit that I think sums up the trouble with how we, as the audience, treat our girls in tights. 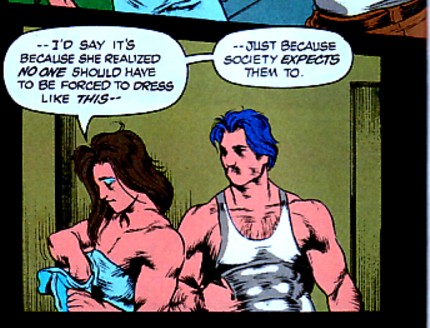 I think that many women would agree with Jack's assessment about being forced to dress that way. And some men too.

That's it for this installment. Remember to have a Happy Father's Day and to not take toddlers into bars!

Posted by SonOfCthulhu at 3:30 AM