The Once and Future Queen #1


Fantasy February and Magical March!
The Once and Future Queen #1 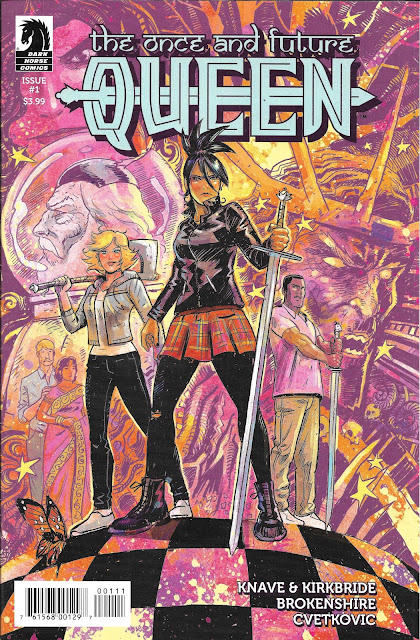 An Arthurian legend gets a modern twist

Here’s a rarity you don’t find much in the Crapbox, an issue that is less than one year old. Owing to my weekend visit to Grapevine Mill’s BAM! (Books A Million) outlet this weekend, I came home with a pile of dollar bin finds that all skewed into almost recent territory, this book being one of them.

Once and Future should not have had a rough road ahead of it in March 2017. The pairing up the same team that brought the successful Amelia Cole series, this modern take on a gender bender version of the King Arthur legend should have been a shoe in for finding an audience. That’s given that the Amelia Cole series was also a tale that blended magic and technology with a female protagonist. However, O and F proved that you can’t count your chickens before they hatch.

The first issue met with good-to-great press upon release and the second issue shipped on time, but after the rest of the single issues abruptly canceled. Readers were asked to wait until November when the five book series was released in trade paperback form. Writer Knave wrote the reason was The comic industry is a fickle thing. The Once and Future Queen was well received by press and its readers, and while it was growing in market awareness, print efforts have shifted to the book market so we can grow and reach our target audience.

Poor sales. I mean, that is what I hear between all those words. The book just did not find a large enough audience. And numbers matter these days. When you stick a four dollar price tag on a book, it better be worth all four bits.

In my case I have a lower threshold to meet as it only cost me one bit. Let’s see if it does…

We begin with the Arturus family packing for a trip to England to watch daughter Rani compete in a chess competition. Note the last name has that familiar ring to it. 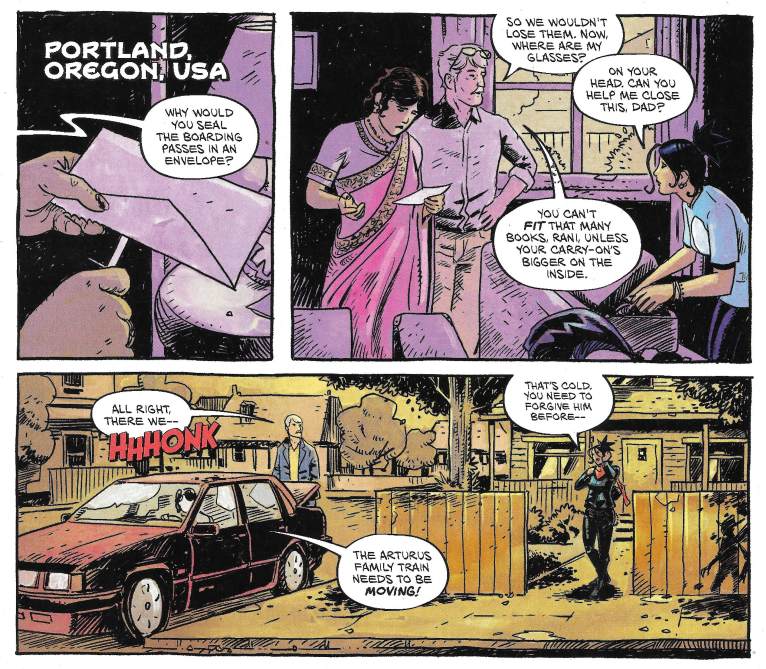 There are a few bits here setting up these three characters and their family dynamic. I like these bits quite a lot because they seem like life. Characters aren’t always strong or social or exposition dumping. 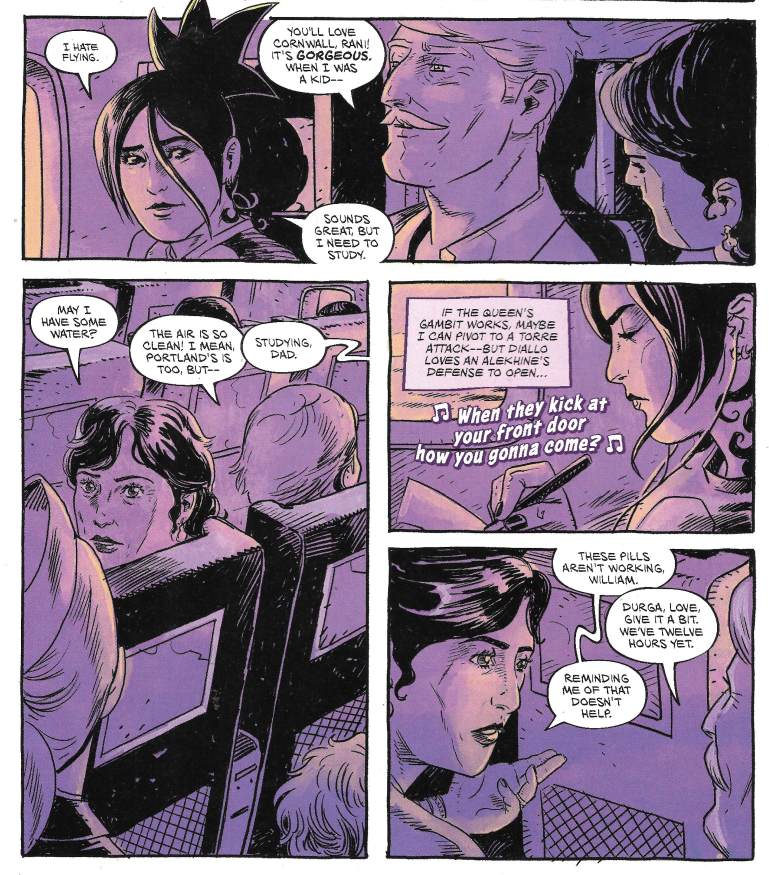 We skip from plane right to the chess tournament, where Rani decimates the guy in round one, but finds herself distracted by a pretty blonde girl in round two. 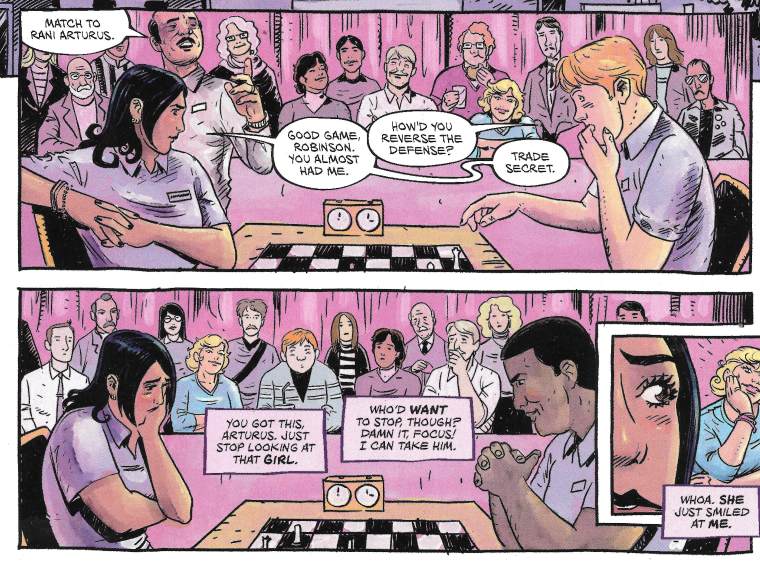 And that leads to trouble of a kind that Rani can’t get herself out of. 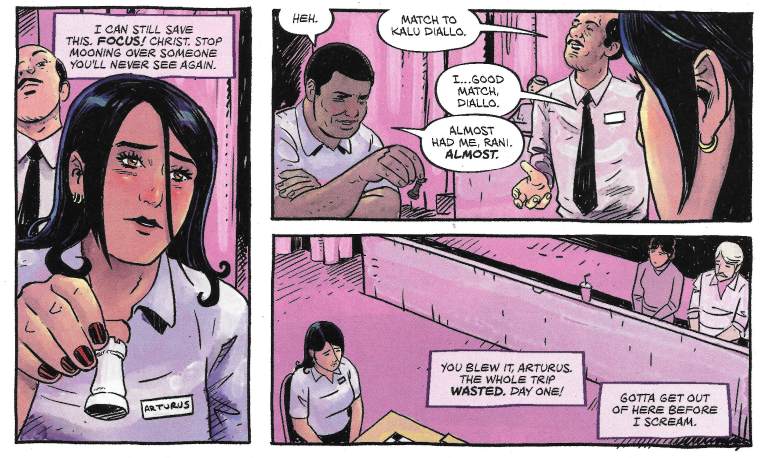 Rani is inconsolable for a bit, and her parents…act like real parents would, with concern and everything. Rani needs space though, so she takes off for some alone time. 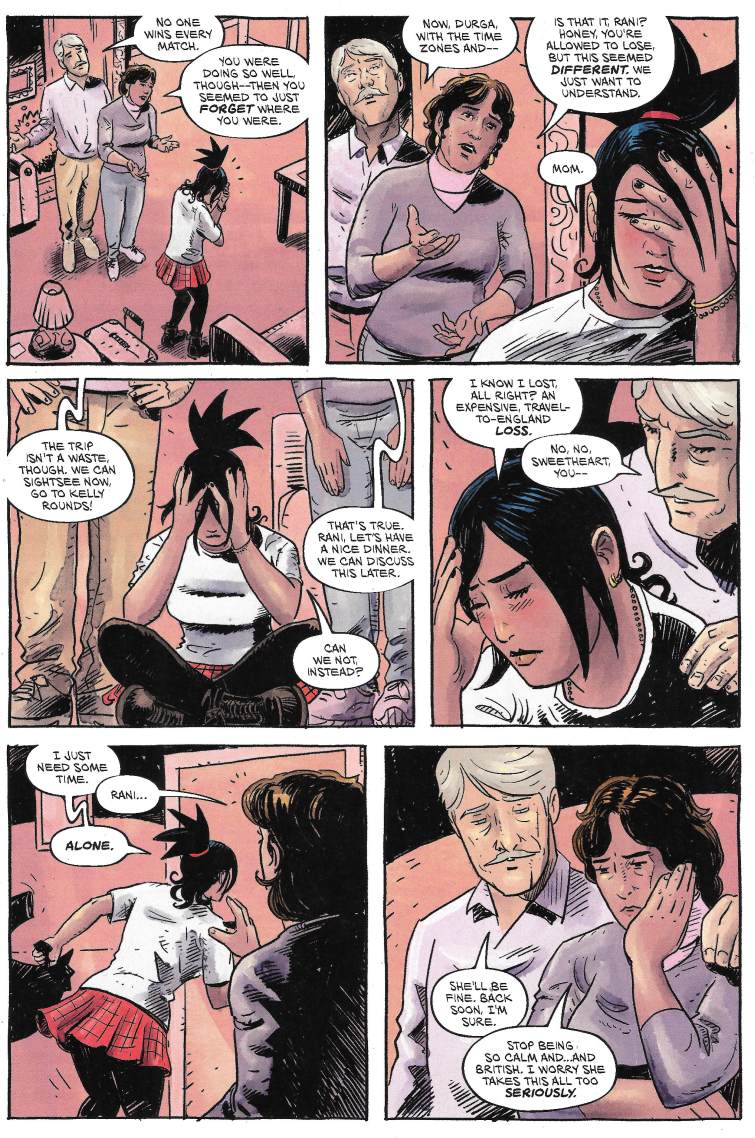 We next catch up with Rani walking along the cliffs by the beach and not in one of those “throw yourself off of them” kind of ways, but in the regular, contemplating your screw-ups kind of way. She obsesses a bit over her fascination with the blonde girl for a bit… 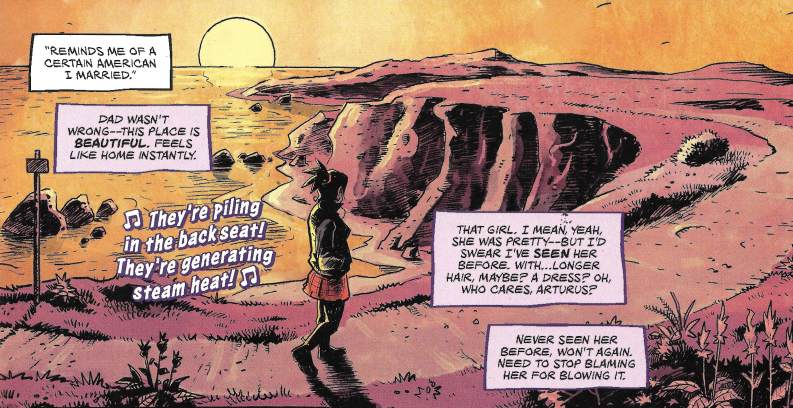 …and then her thoughts turn from the girl to what she will be doing with the rest of her life, the chess tournament loss clearly starting some wheels spinning in her head about what she places importance on. 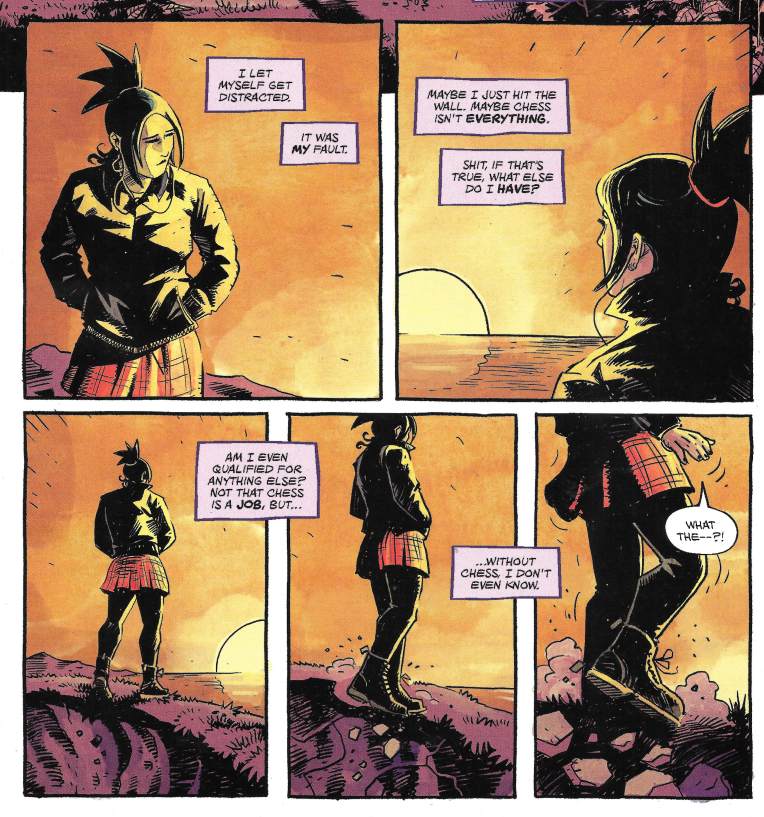 Right about then she takes a tumble down the natural embankment. Around this part in most reviews I usually comment on the art and I’m not seeing anything off about the work done here. The panels are clean and understandable, and the less flashy style gives us a chance to focus on the writing. It reminds me a bit of the newer Archie books in that there are some stylized elements and others are more faithfully rendered. 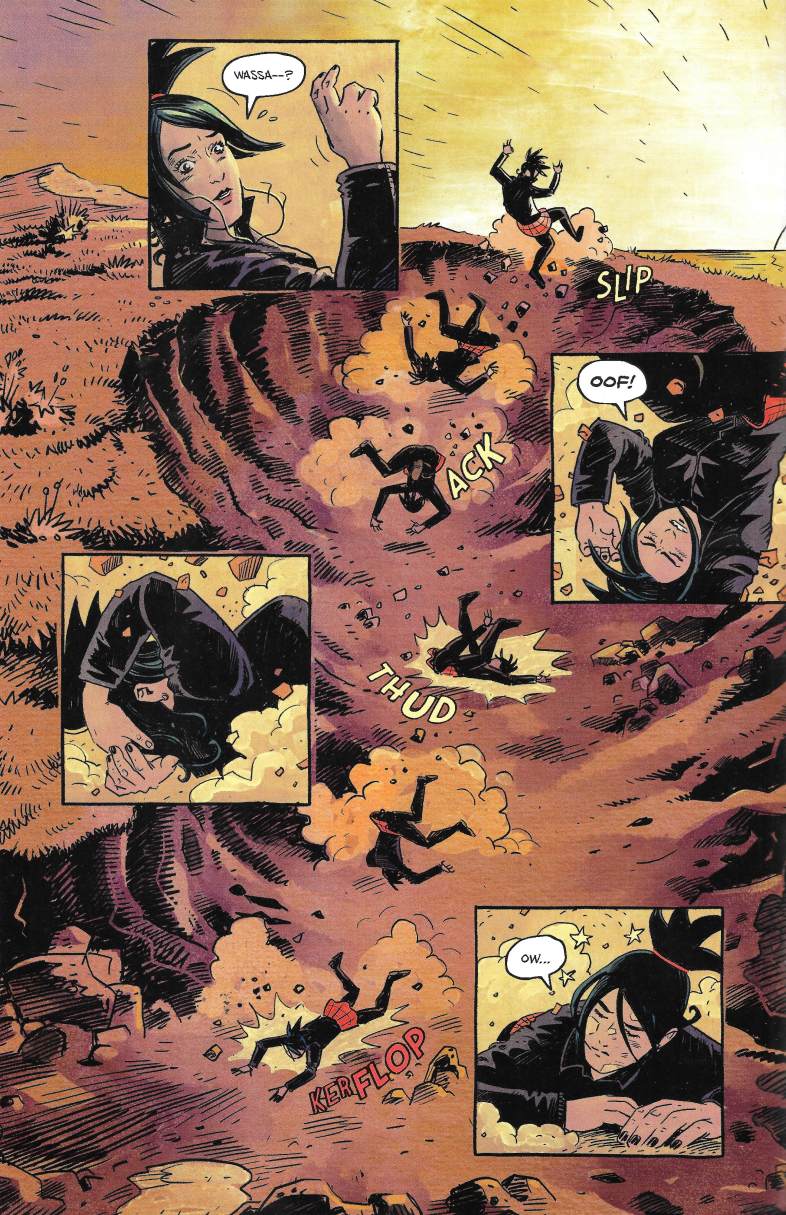 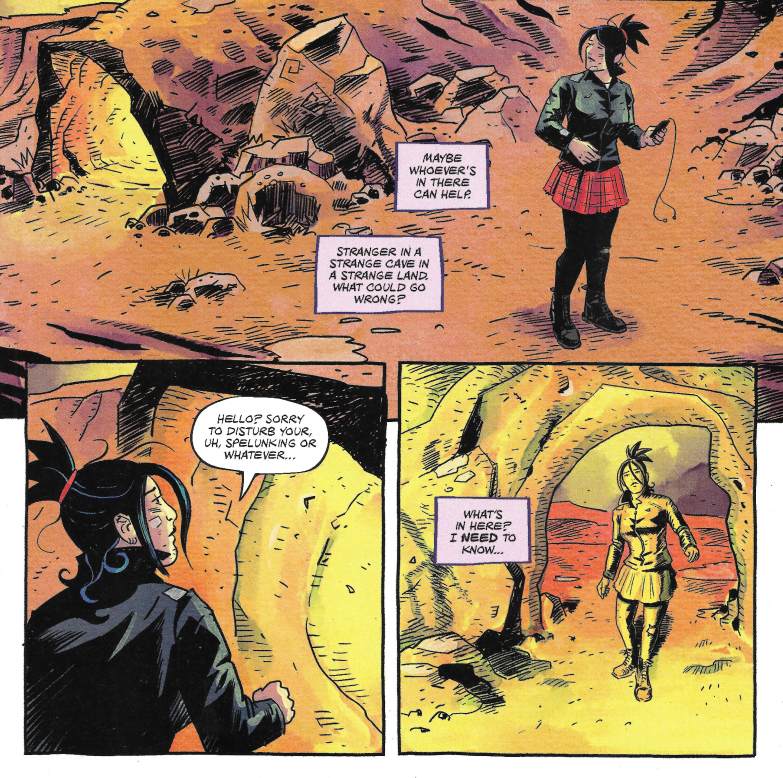 Meanwhile, up on the cliff above walks the girl from the chess tournament. Now I GET what we are going for here: this is the stand-in for Guinevere (who is named Gwen). The sad thing is from the moment we get introduced to her, she barely registers as a character. She spends a majority of the books length following whatever whim the plot throws at her, saying things that…well, you’ll see them, but they make her into a cardboard cutout more than a person with feelings. 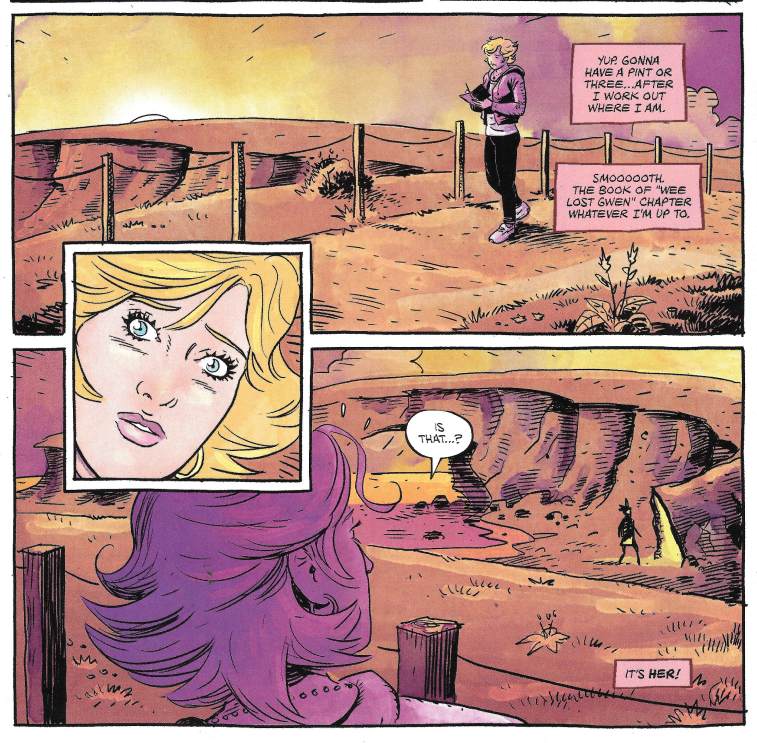 And speaking of feelings, she sees Rani again before she enters the cave and it’s clear she is smitten with our Arthur-wannabe too.

Meanwhile Rani finds a sword in a boulder, so she promptly pulls it out, because destiny and blah, blah, blah… 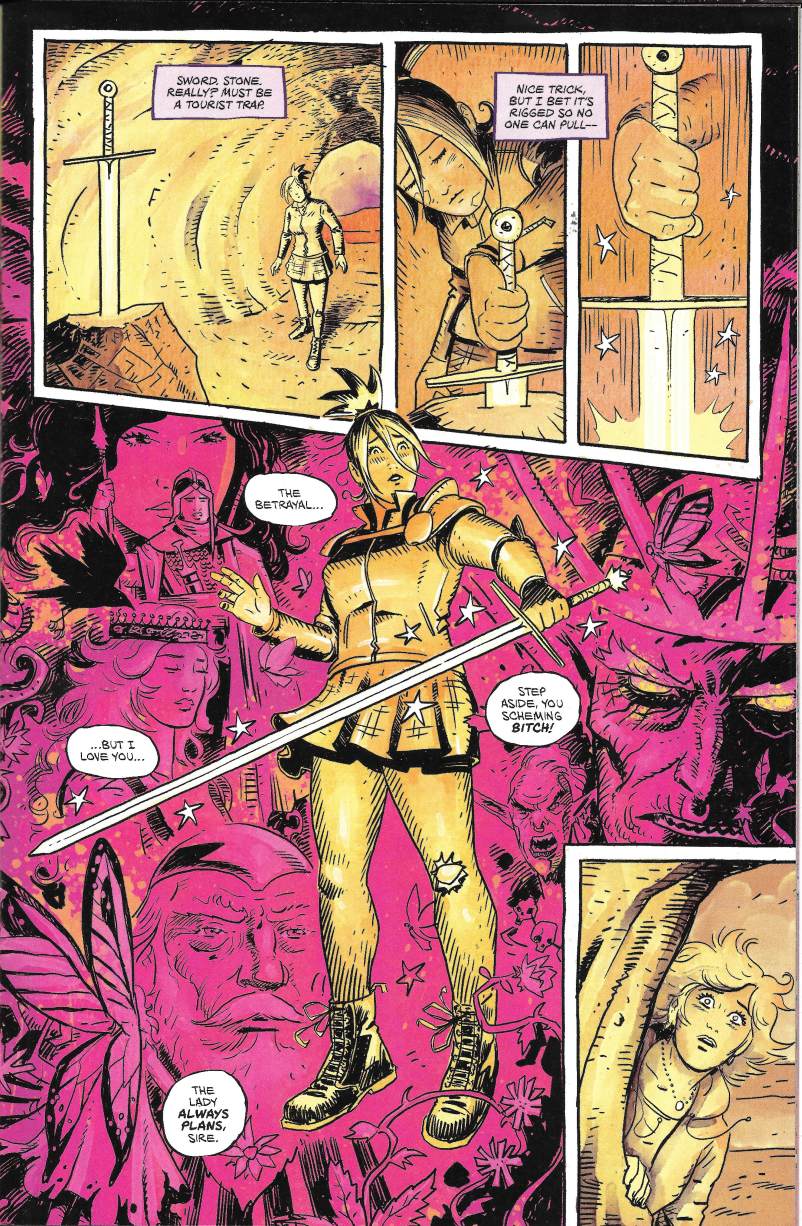 …and cue Merlin to explain things.

A note about Merlin, he’s is usually one of my favorite characters in this whole mythology. I loved him in Boorman’s Excalibur movie. He’s like a human-sized Yoda in that movie, questioning why humans allow their feelings to guide so much of what they do, yet ceaselessly hoping to chart a better course for all humanity by his machinations. He’s a neat character, the outsider who cares very much for us yet isn’t a part of our struggle.

And writers tend to know to play him a little bit wacky or unsocialized, which is how we get him here. And don’t mind the space suit. It’s a rental, I believe. 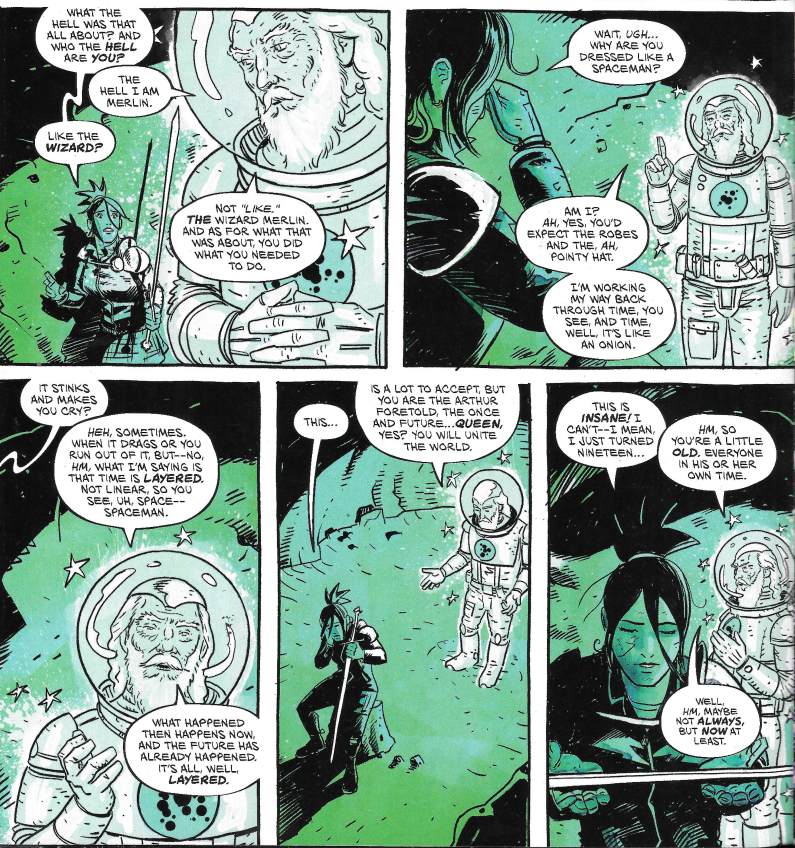 Or whatever that layered part means. So now Rani has a destiny, a much larger one than Arthur had, which is to “unite the world.” Which in my mind would be by becoming some kind of force for change that makes everyone want to follow her… 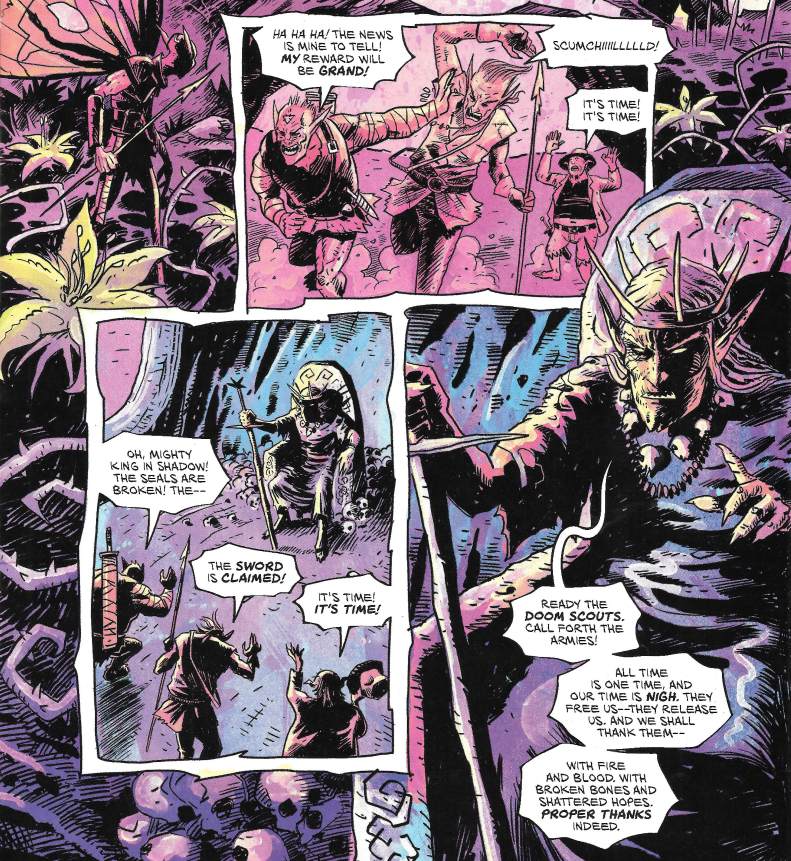 …but in an awful step-down, the writers decide to go with introducing a generic band of other dimensional goblin-orcs because “sword” means “hit things with sword” and a lot of the wind goes out of my enthusiasm for this book. I think I see why this failed to catch on. We’ve seen people fight orc-things before. The originality of the concept in this book has just been whittled down to Knights of the Round Table in a modern setting with some gender-swaps.

How grand would it have been to see the sword cast aside plotwise (it is really just a metaphor for strength against a coming conflict which need not be physical) and to see Rani go fight the true evil oppressions that guide this world…you know, abuse of political power, corporate greed, and man’s inhumanity to man? Wouldn’t that have made a much deeper and richer storyline?

Instead we learn that King Arthur was a “fake” who Merlin tapped to join all of England together. And then he puts forth some bull shot that the sword is really just a symbol, but I got news for him: that “symbol” will be used to stab a bunch of goblin-orcs by the end of the issue. Whatever big concepts the Merlin in this bit hopes for the plotline, he clearly isn’t reading the script of this comic. 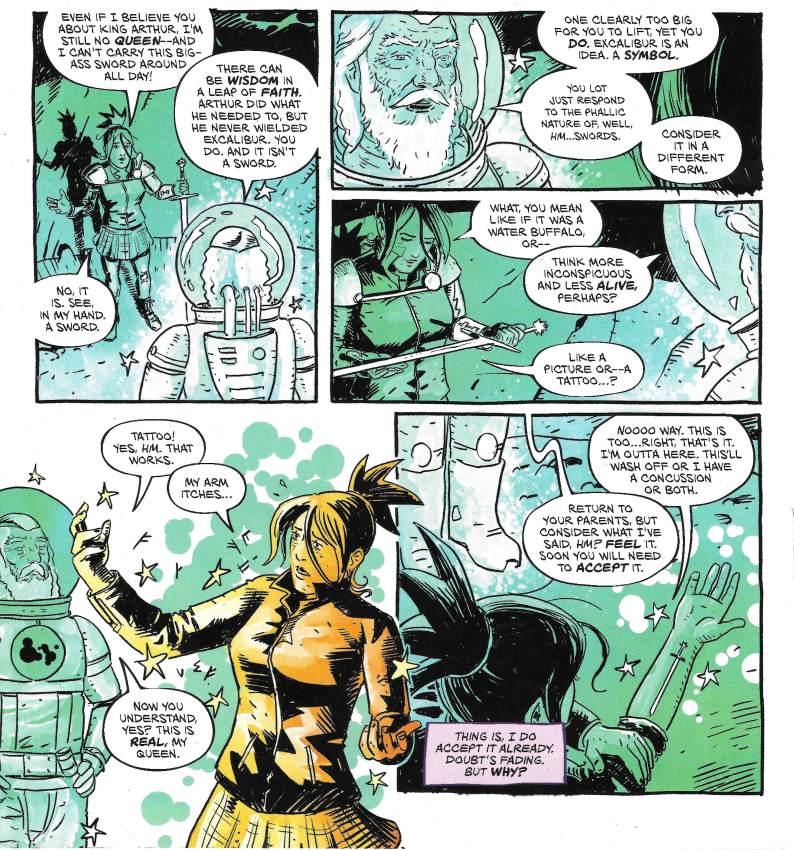 Anyway, he turns the sword into a tattoo so Rani can take it back to America on the plane.

Rani tries to sneak back into her hotel room but she wakes her parents and realizing she needs a good excuse, she shows them the sword. 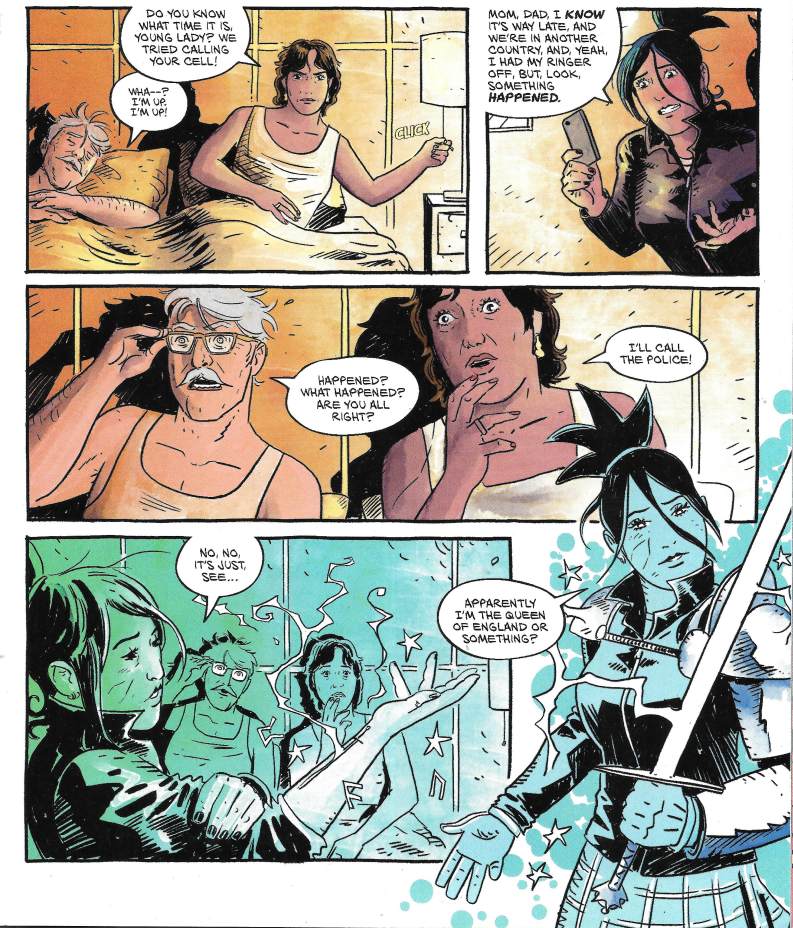 Which freaks them out so much that the hop a plane flight home the NEXT MORNING, casting aside any sightseeing plans.

And even though that’s some mighty good work fleshing out the parents, Gwen is reduced to following a hunch that says fly to Portland, Oregon unexpectedly. Her character could have seriously used a bit of an overhaul. Maybe make her impulsive and after having seen Rani, has to follow her back home? Or any of a million other things, but making her have some mystically-implanted need to travel to Rani’s city smacks of weak plotting. 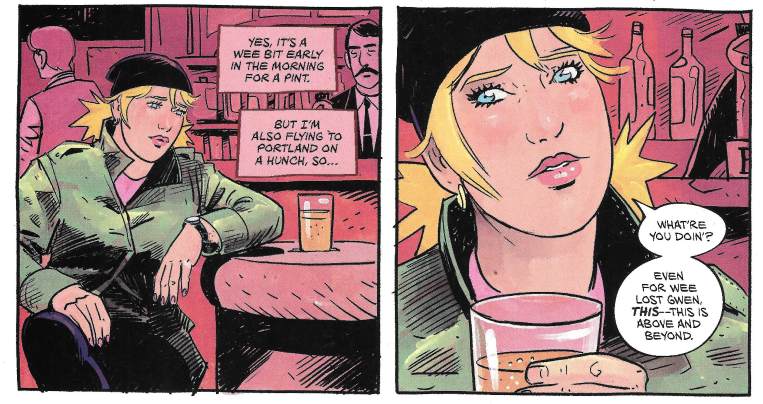 I’d say I don’t like the character of Gwen, but that’s untrue. There is no real character there to dislike. What I dislike is lazy scripting and this feels like that. Hell, make the pair fall madly in love before Rani finds said sword and her parents pull up stakes. THEN have Gwen follow her because she is her true love. At least that would be believable.

Especially when Gwen just shows up at Rani’s favorite park bench for playing chess. Cause Portland is the size of a postage stamp? No, I’m sure she felt drawn to that particular park bench. Ugh. 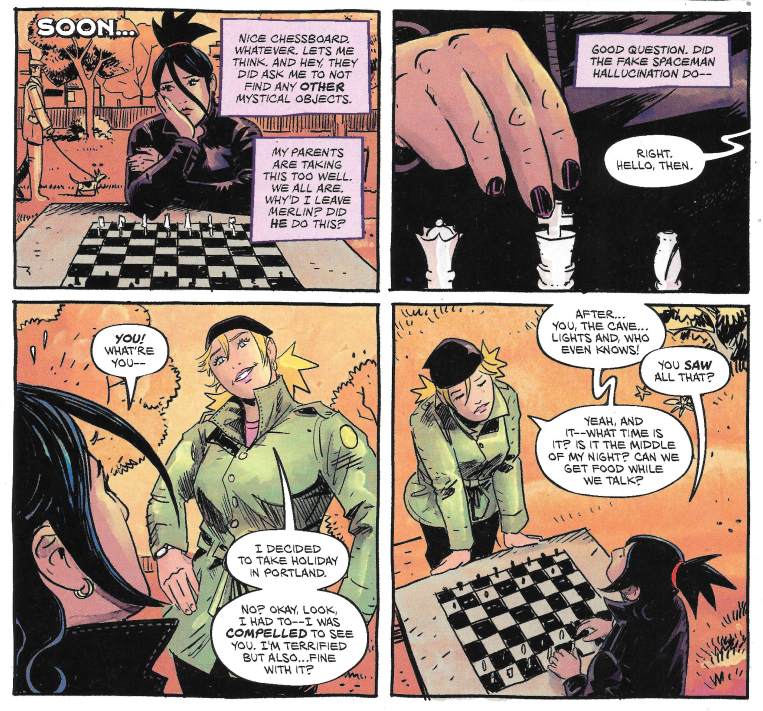 Meanwhile we meet our Lancelot, who is named Lance because of course he is… 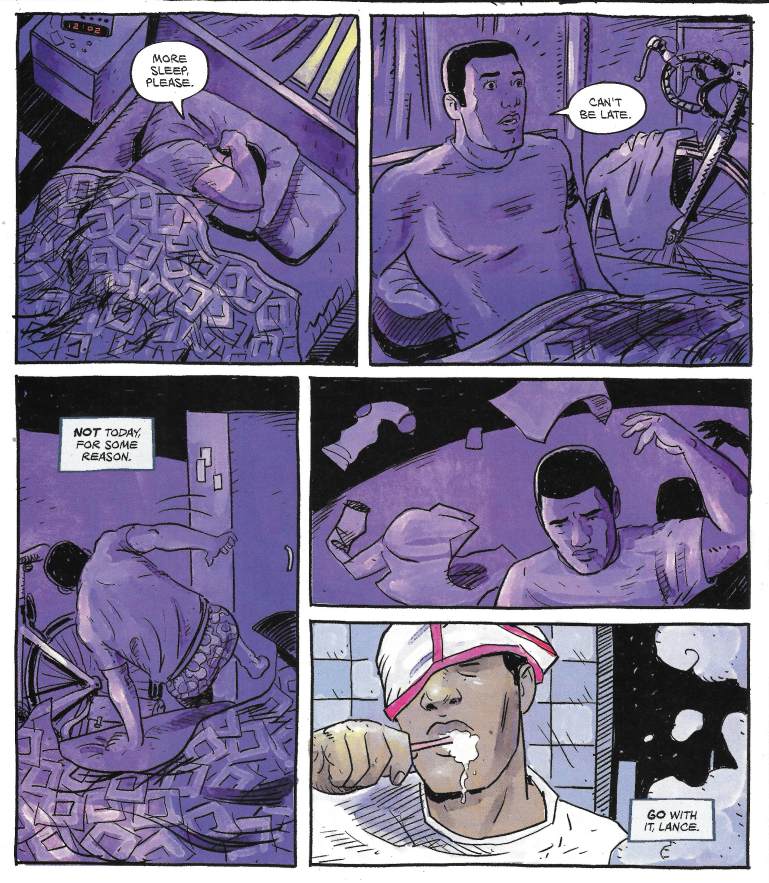 He just can’t be late to work today because plot contrivances are contrived. And who should come in but Gwen and Rani. And he is their waiter. 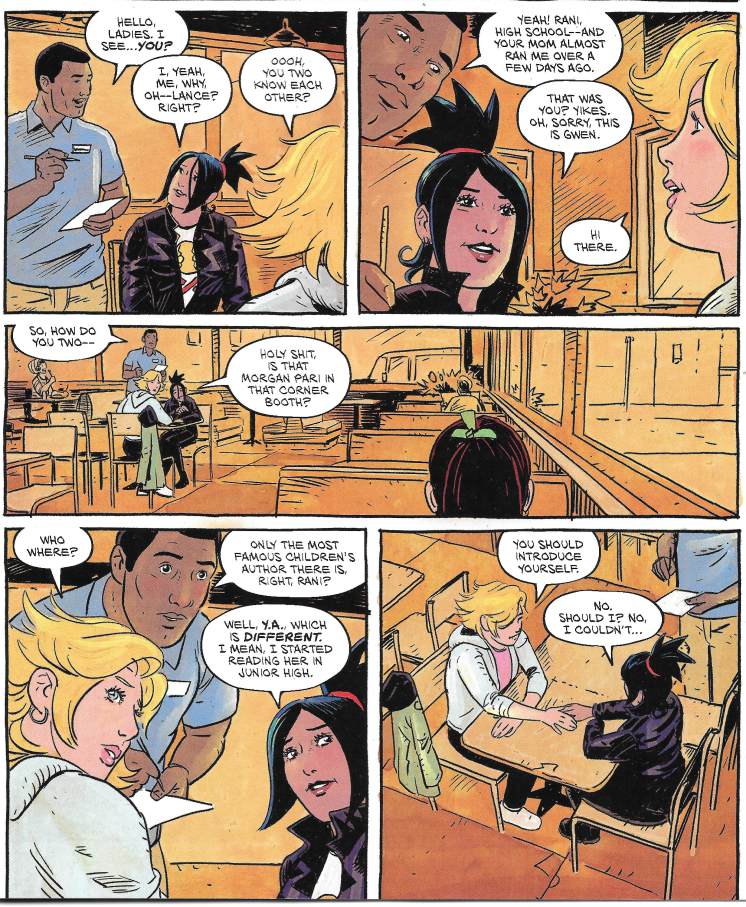 While they watch their favorite YA author, something odd happens to her coffee (which she seems to identify as something dangerous) and a interdimensional rift opens. 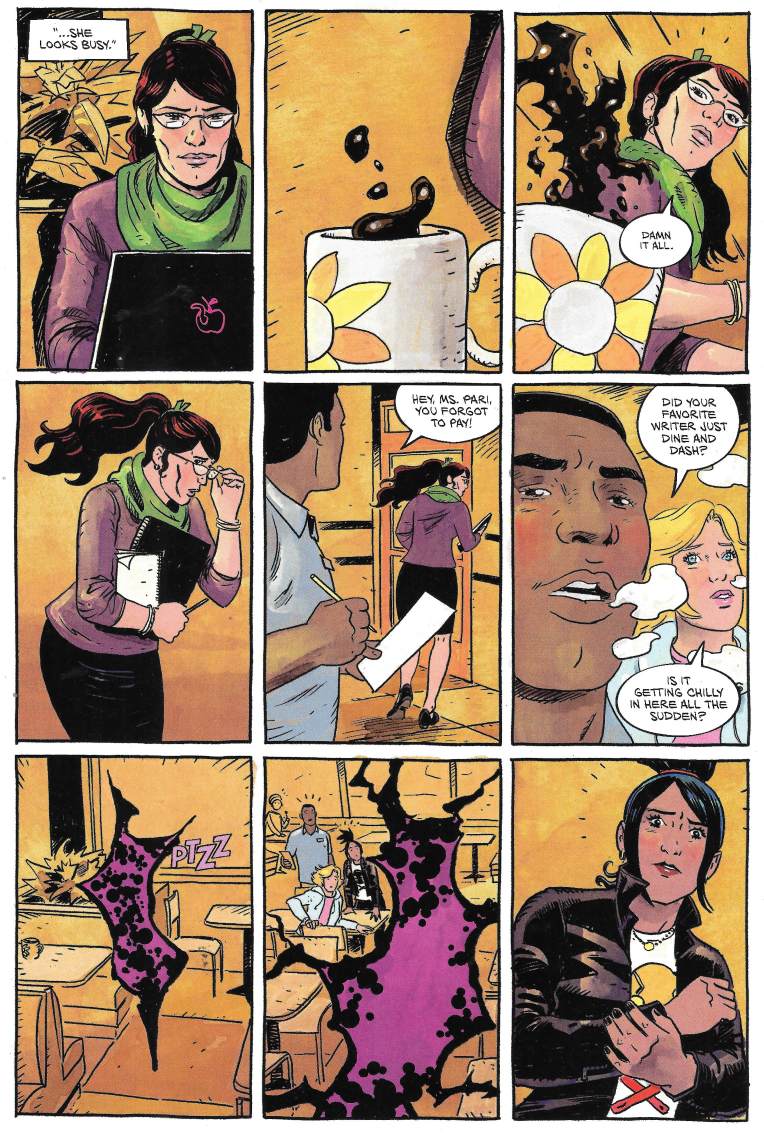 Which leads to orc-things seeking the sword, so Rani makes it appear… 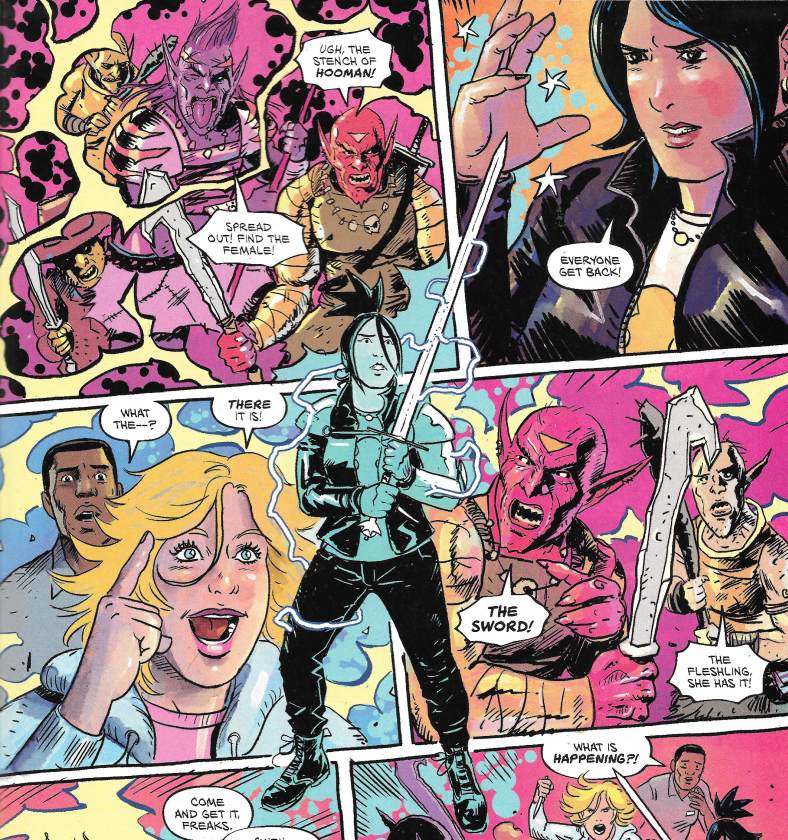 …and we get generic fight number 236 where “This isn’t a game!” is actually used non-ironically. 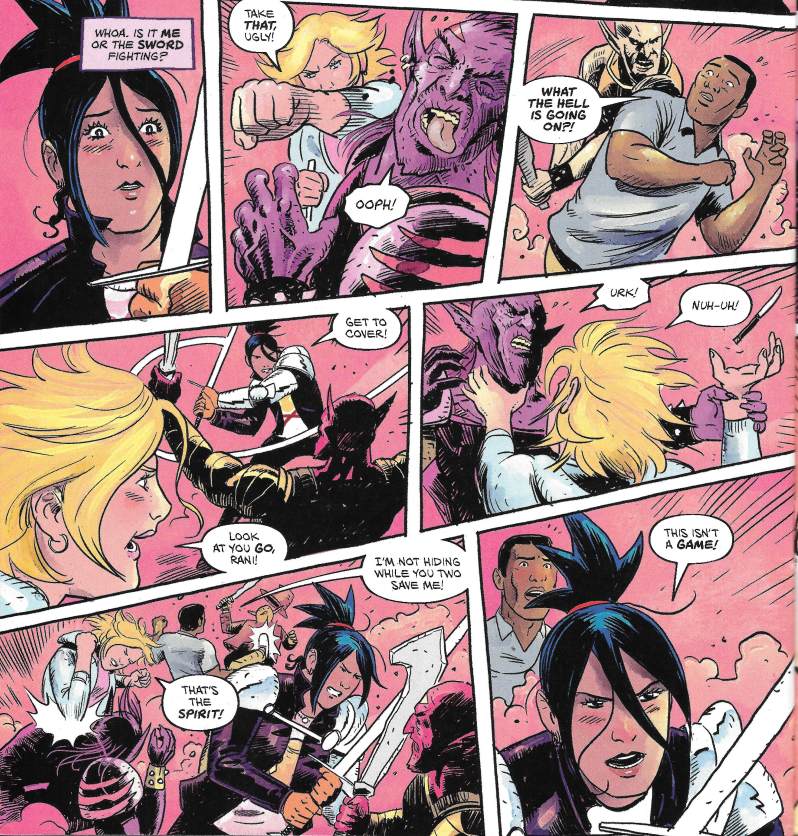 The creatures identify themselves as “Fae” and then more fighting… 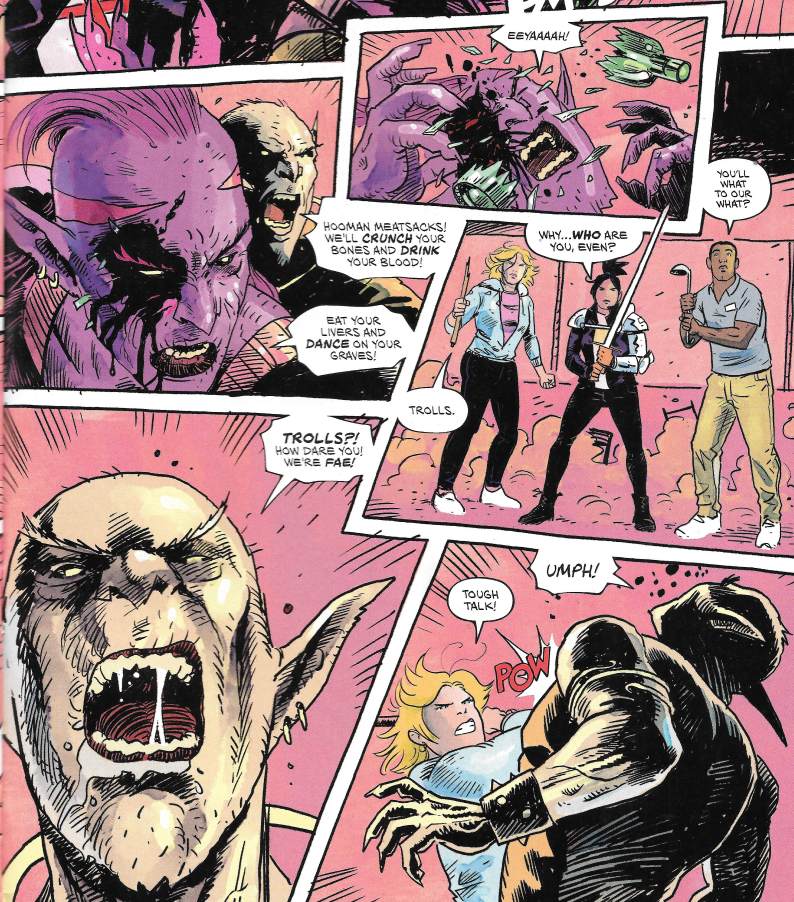 And in the end Merlin looks just as disappointed in where this plot has gone as I do. 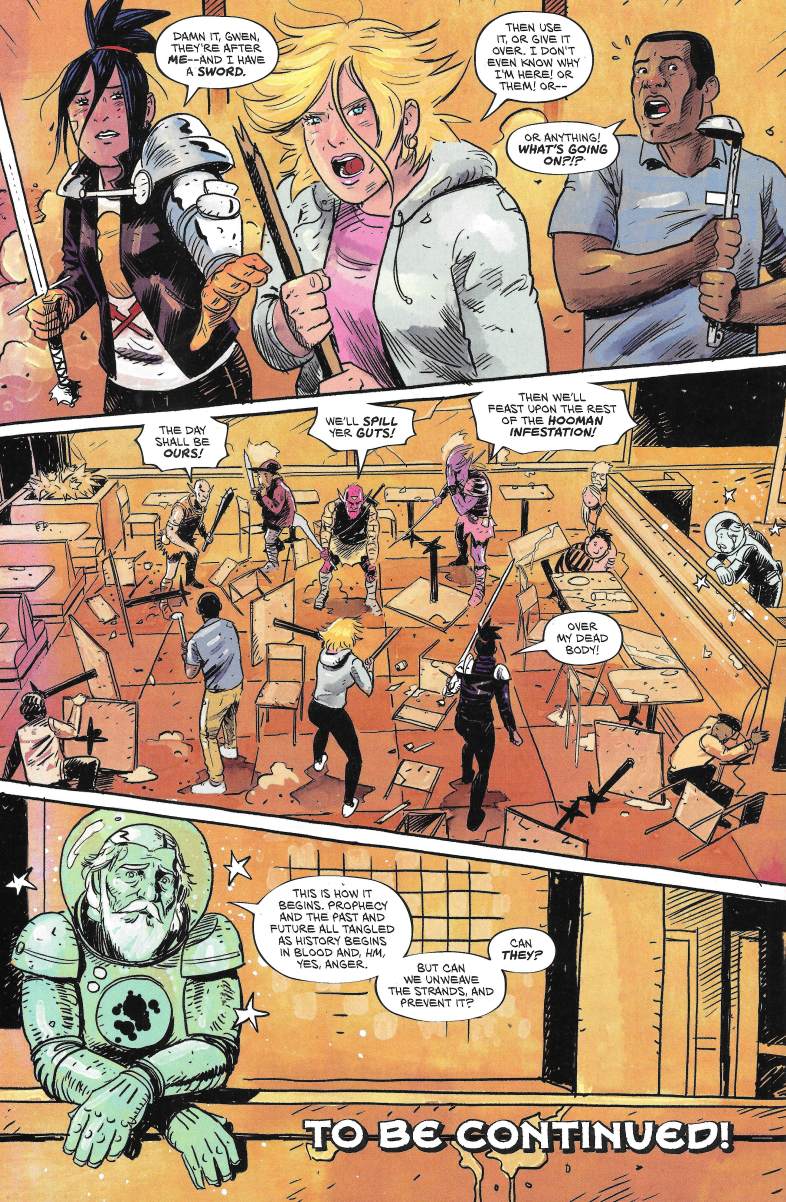 Perhaps they mean to turn the tables on us next issue. If so, I’m sorry for ending this review so negative on the book. However, I can’t give high marks for something that began with a bit of promise and appeared to quickly squander it.

The trade is out right now, but I doubt I’ll look it up anytime soon. Maybe. Just too many books that I have higher hopes for than this in the reading pile. Maybe I give those Amelia Cole trades a try first and see if they hold up better. For right now though, I’m over this modern Camelot take.
Posted by SonOfCthulhu at 2:28 AM