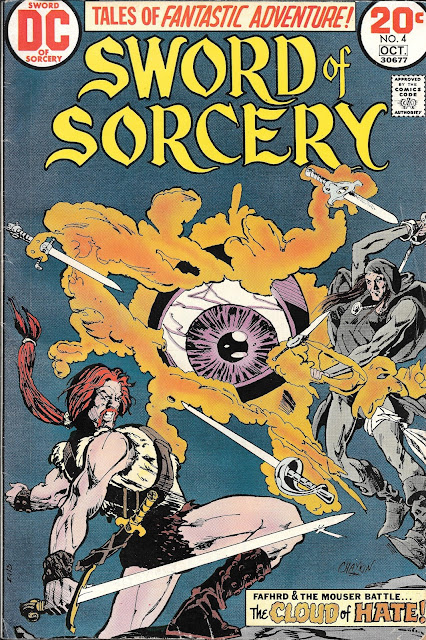 In my own defense, the wording is so small that I didn’t see it.

There, in the bottom right. See it? Above the words “The Cloud of Hate!”, a story title that should have given it away. It didn’t because great titles are overused. I still should have noticed. Or looked closer at the words above it.

Oh, yes! This is a comic tale torn from the world of Nehwon, set in the great city of Lankhmar, a place its author Fritz Leiber describes as... crouching at the silty mouth of the River Hlal in a secure corner between the grain fields, the Great Salt Marsh, and the Inner Sea is the massive-walled and mazy-alleyed metropolis of Lankhmar, thick with thieves and shaven priests, lean-framed magicians and fat-bellied merchants—Lankhmar the Imperishable, the City of the Black Toga.

A city of vile villains and larger than life heroes, none more notable than the massive red-haired Northern barbarian Fafhrd and his companion the failed hedge-wizard but nimble rogue Mouser. Fafhrd and the Gray Mouser (the rogue’s clothing color of choice) were created by Leiber in 1939 and shared adventures in seven books that were published over the next fifty years, culminating in the book The Knight and the Knave of Swords in 1988.

Lieber’s goal was to create heroes who were more human than their contemporaries Tarzan and Conan. From personal knowledge I can say their adventures bear this out. Typically motivated by desire to get paid or idleness, the mis-matched pair of thieves are one of my favorite fantasy series. I first encountered them in the same place I encountered Cthulhu and Elric, and that was in the wild and wooly pages of TSR’s Deities and Demigods tome for Dungeons and Dragons at a time before trademark attorneys paid close attention to those kinds of things.

Good thing they didn’t too, as that would have robbed not only me, but the estates of each with my hard-won cash dollars that I would shell out over the years on all three properties.

To find that a random pick-up at Half Price from the $5.00 bin, nabbed because it was “old”, fantasy, and might lend an air of respectability about the Crapbox, was in fact an adaptation of one of my favorite book series! It was almost too much.

And then I cracked the cover open and my jaw almost dropped. Take a look at the writers and artists of the two stories below to see why…

Denny O’Neil adapting Leiber and all the artistic chores falling on Howard Chaykin, who is just masterful. Be still my leaping heart!

We start with Fafhrd and Mouser sitting in a cold Lankhmar alleyway thinking thoughts of things they would rather be doing, when ruffians appear at the head of the street. Mouser notices right away that the appear to be up to no good… 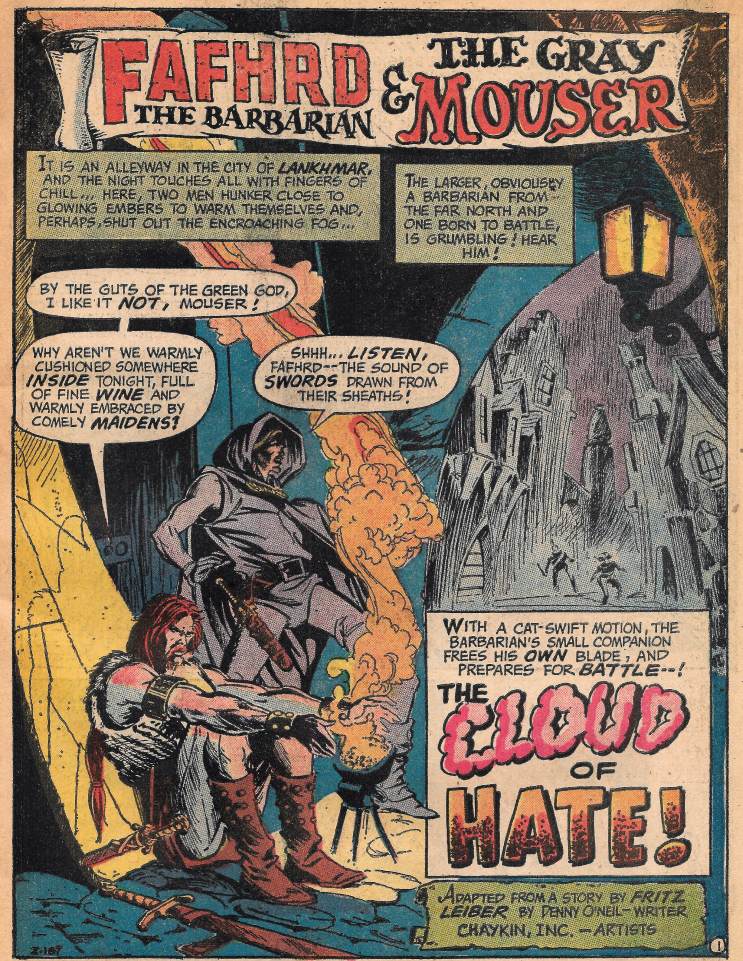 …and is able to dodge and dispatch the knife thrower with little effort (but amazing style as Chaykin uses the panel positions to maximum effect. Fafhrd squares off against Gnarlag, who has mastered two-handed combat. 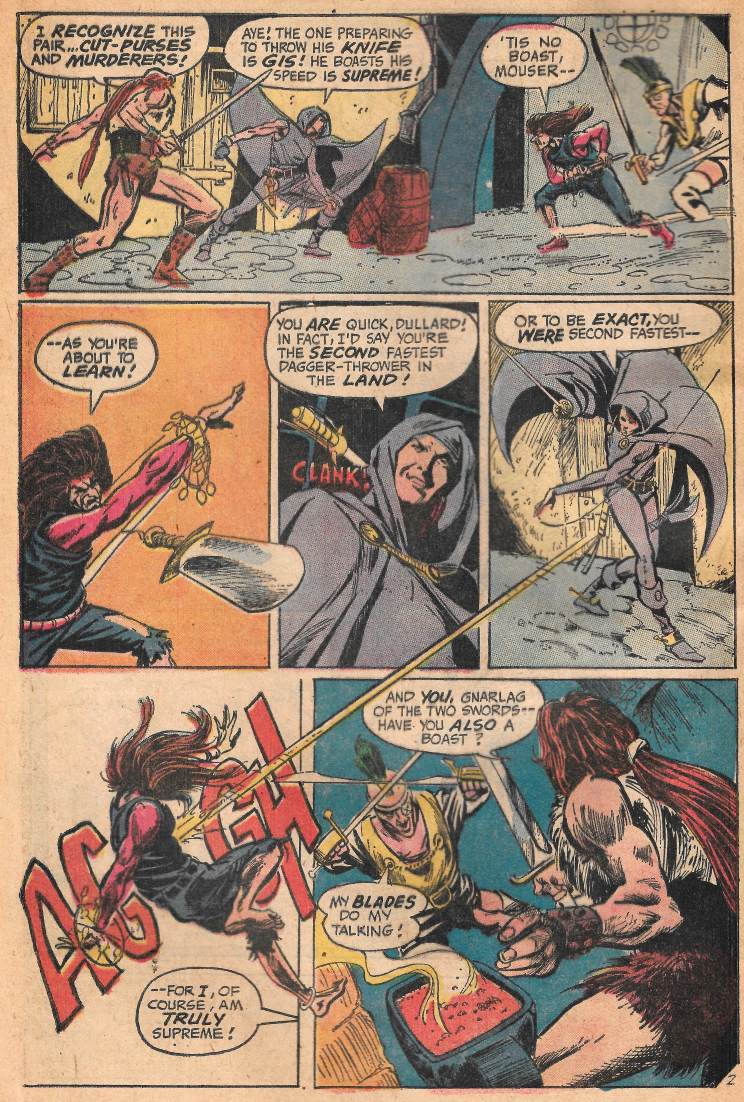 Despite Mouser’s jests, the large barbarian doesn’t need a second sword to best his opponent, just the distraction a thrown brazier provides. Love the banter, much of it the flavor of Leiber’s actual tales. 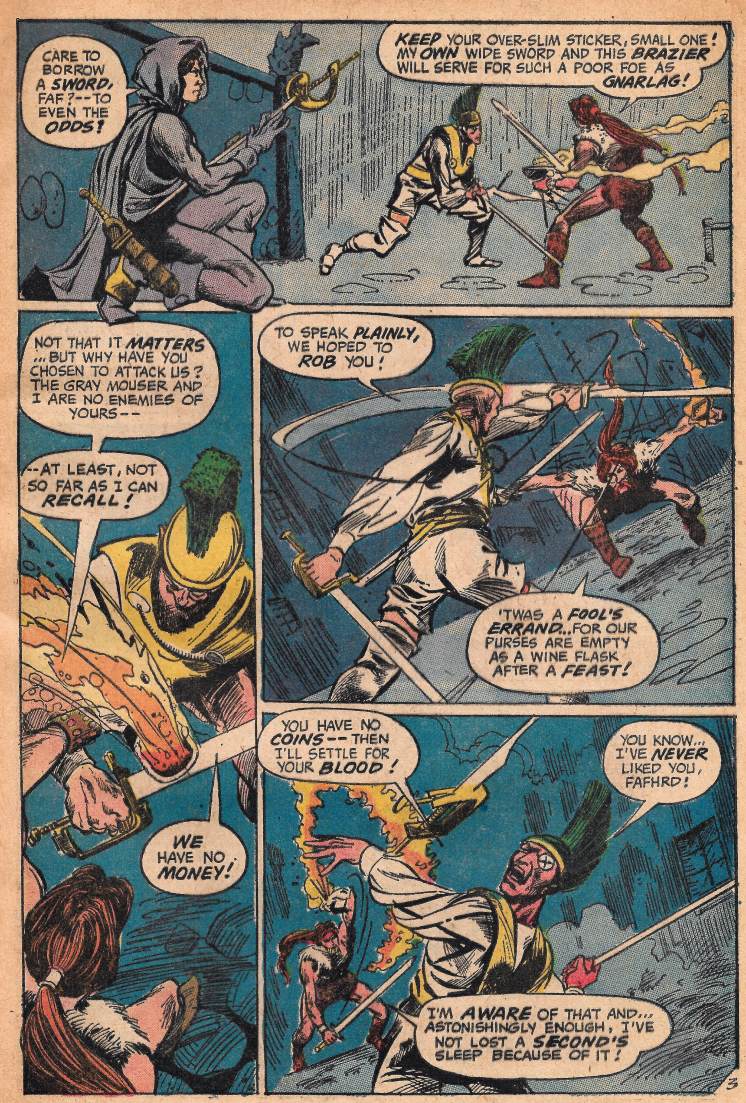 With both of their enemies dispatched, the pair notice something strange: a patch of fog that appears to steal the very knife from out of the chest of one of the ruffians. (love Fafhrd’s “can’t even be cold and miserable in peace” line) 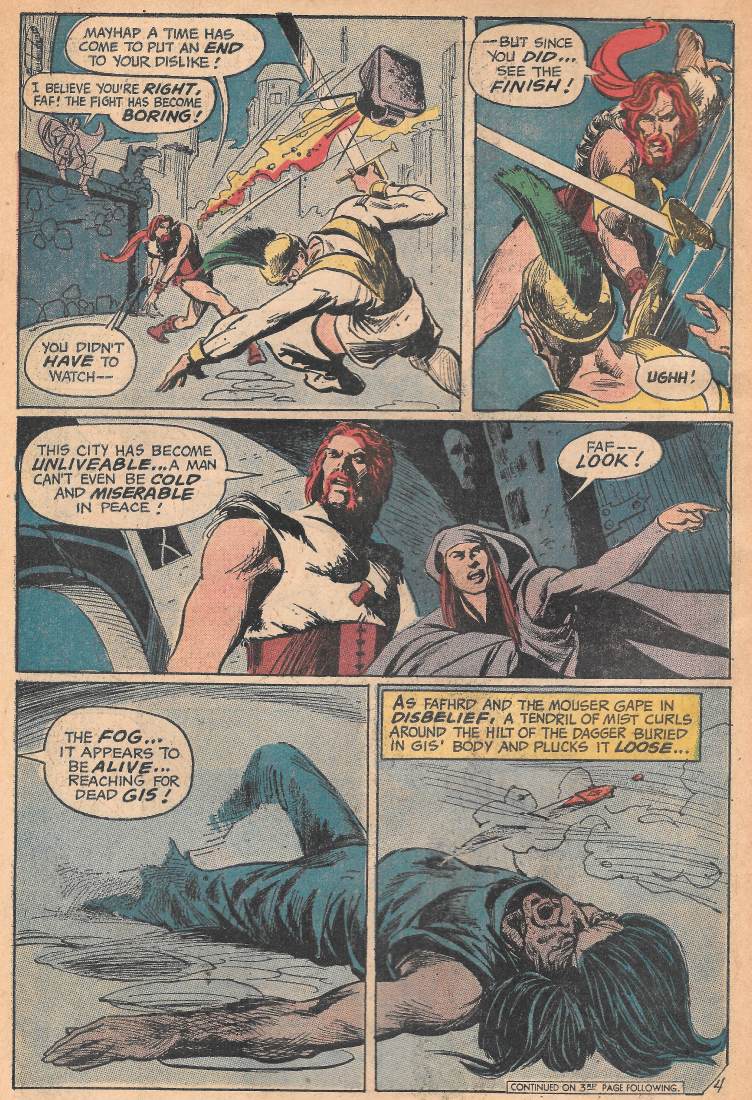 And with that, the pair is following fog over the rooftops in hopes that a klepto cloud might also have snagged gold or jewels in its nightly wanderings. They are content to let it lead unmolested until… 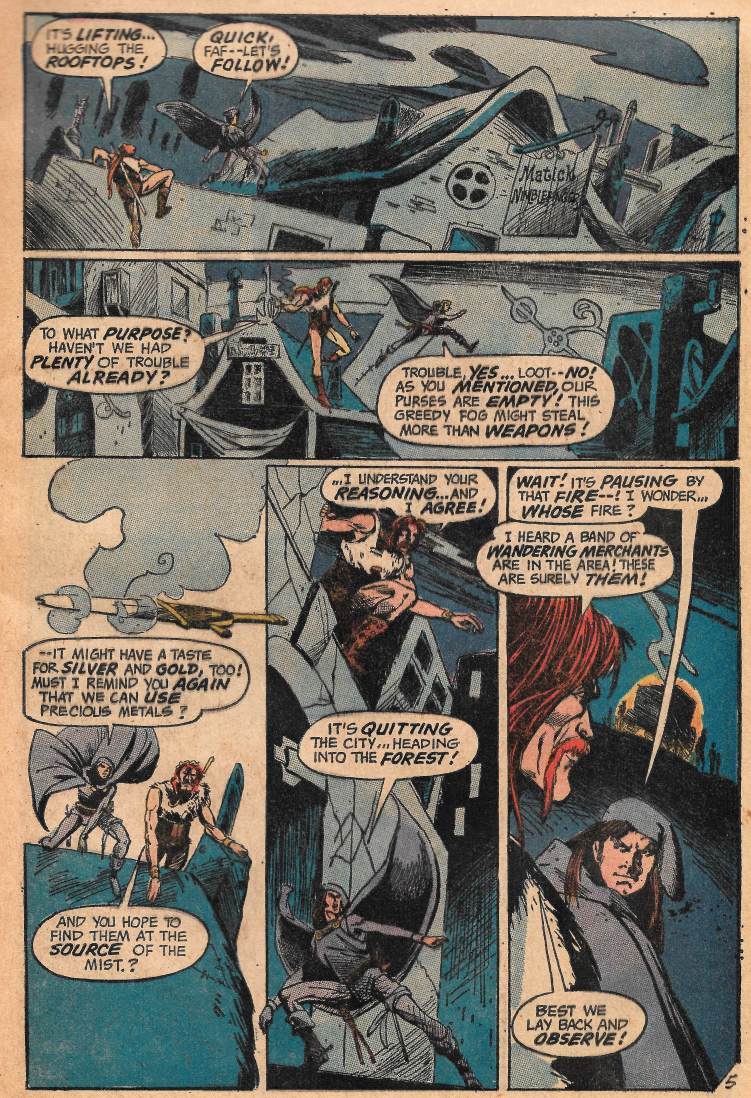 …the cloud does some molesting itself, killing a young girl before the pair can figure out its intent. 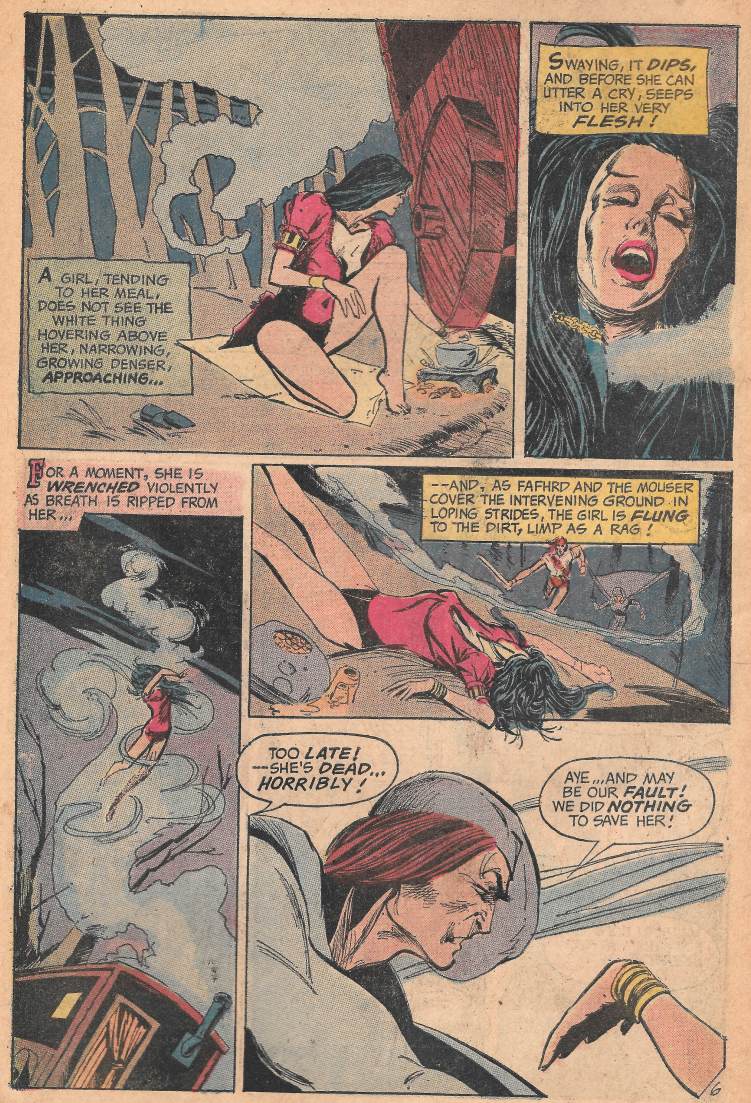 Then things become deadly serious, as the duo are out to do harm to the fog cloud in kind. They happen upon a guard blocking their way, but Fafhrd puts him to sleep the hard way. 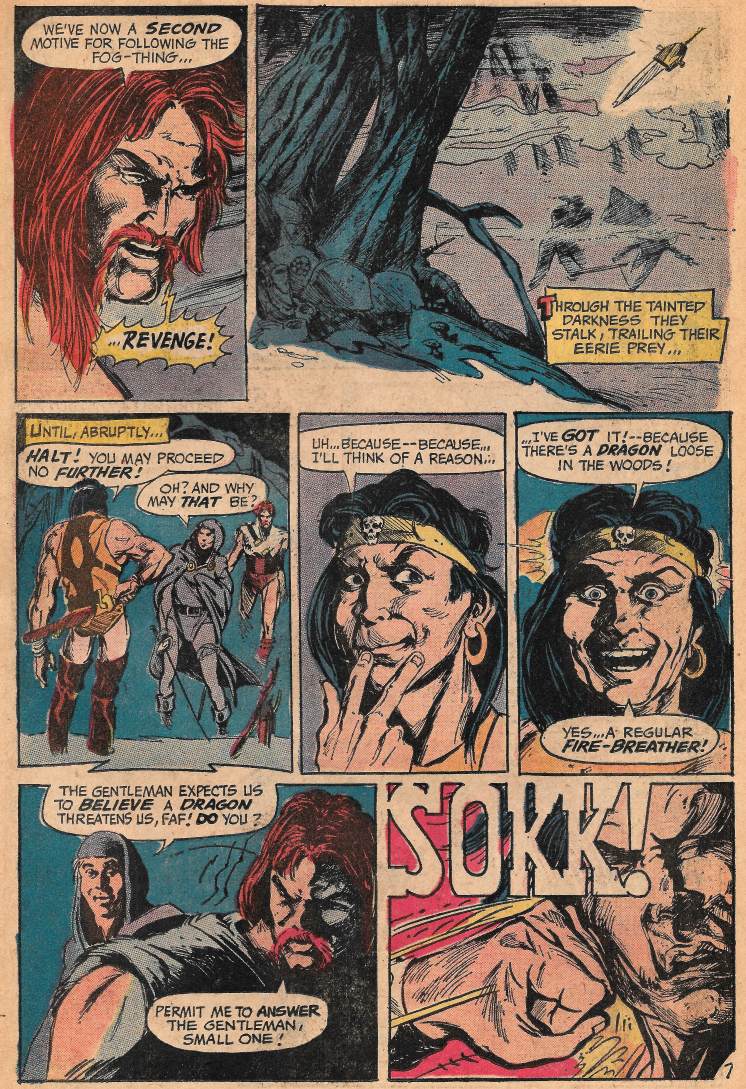 As they find something horrifying in the cave, I’m forced to admit that Chaykin let me down in panel three by drawing Fafhrd’s lower body like that of a girl in a swimsuit from Millie the Model. What’s going on there? I can’t unsee that. Luckily this is the only bit in the book to complain about and the next page makes up for much of it. 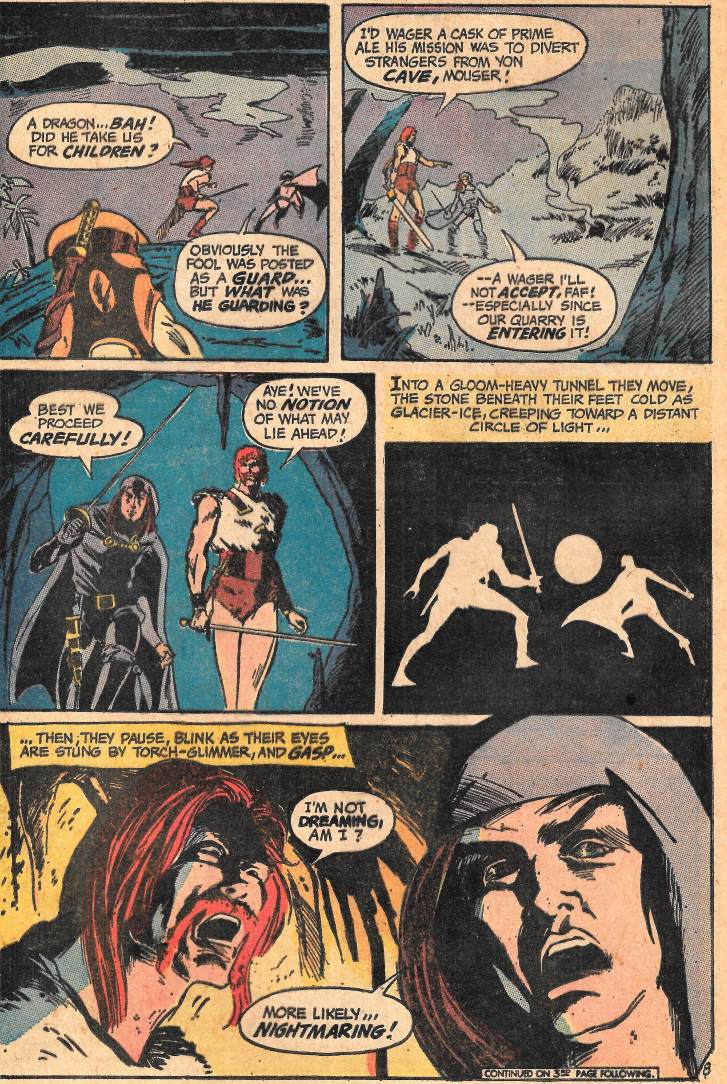 For the cloud is some kind of evil Hate God that has sucked the life from most all of it’s worshippers. 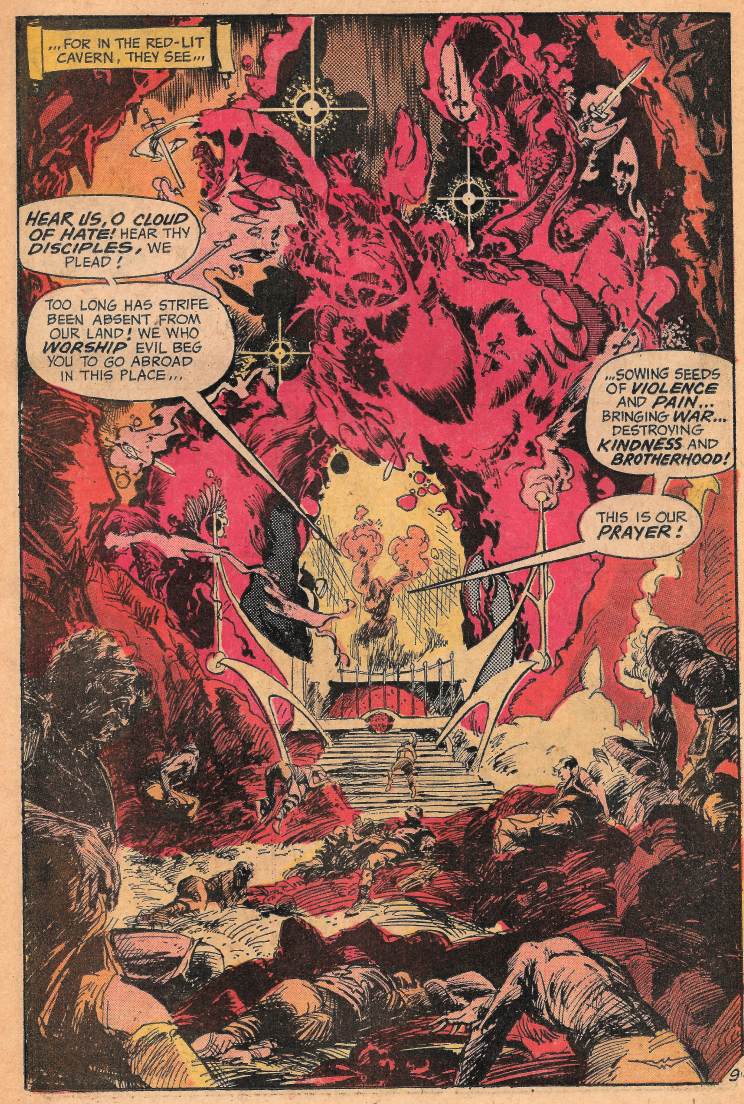 I wonder how you kill a Cloud of Hate. 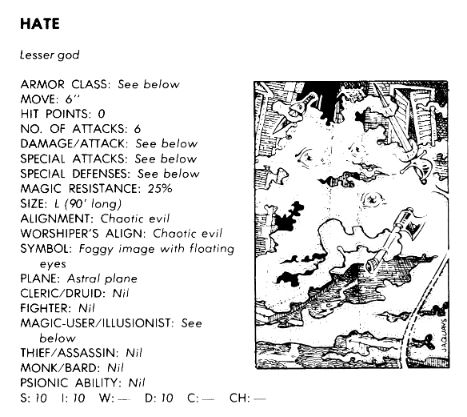 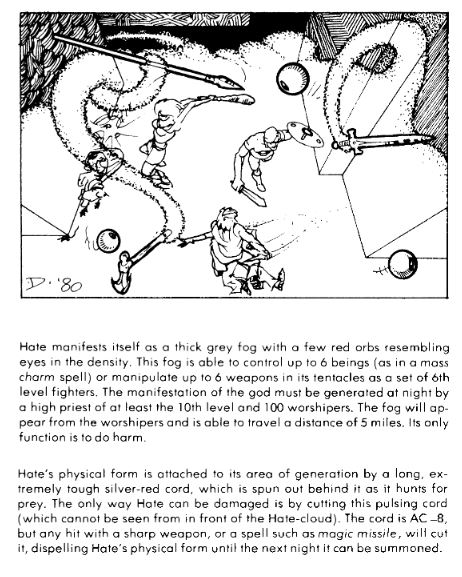 Mouser and Fafhrd consider leaving given that they don’t have my first edition Deities and Demigods volume in their hand for careful consulting. However, they are just a tad bit too long in making that decision, so it appears fighting it out is their only option. Lucky for them the worshippers are unarmed… 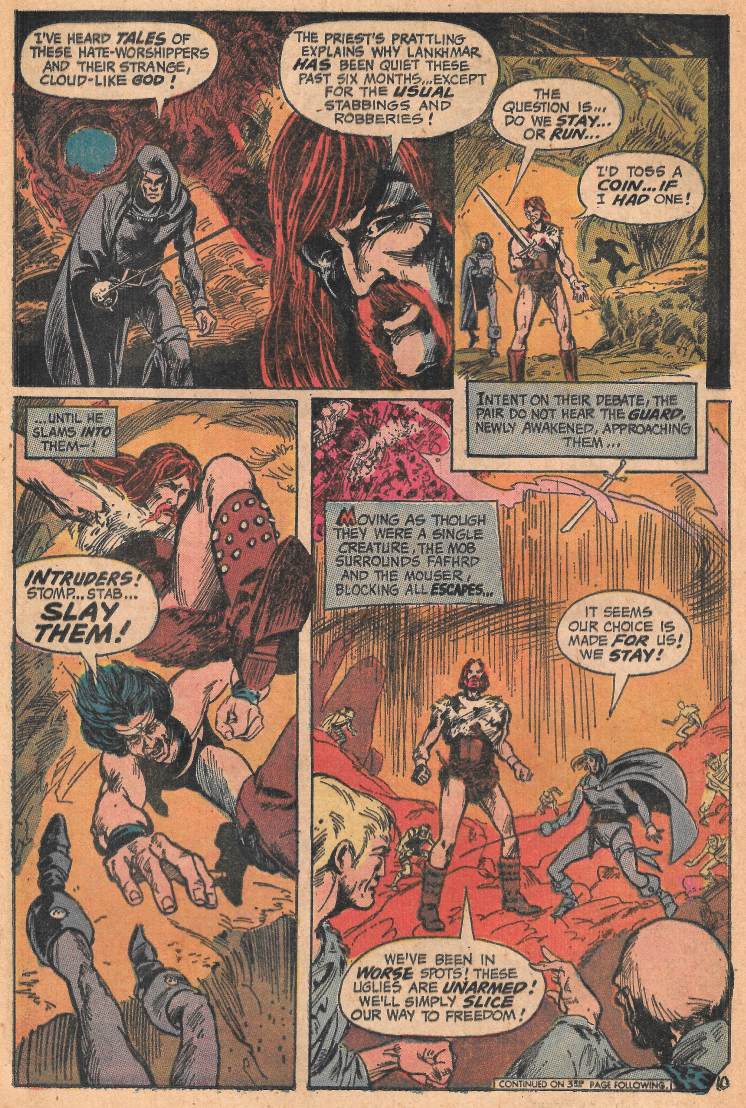 …unlucky for them, the cloud of hate isn’t. Not only that, but it appears solid enough to do them both harm. A fight ensues… 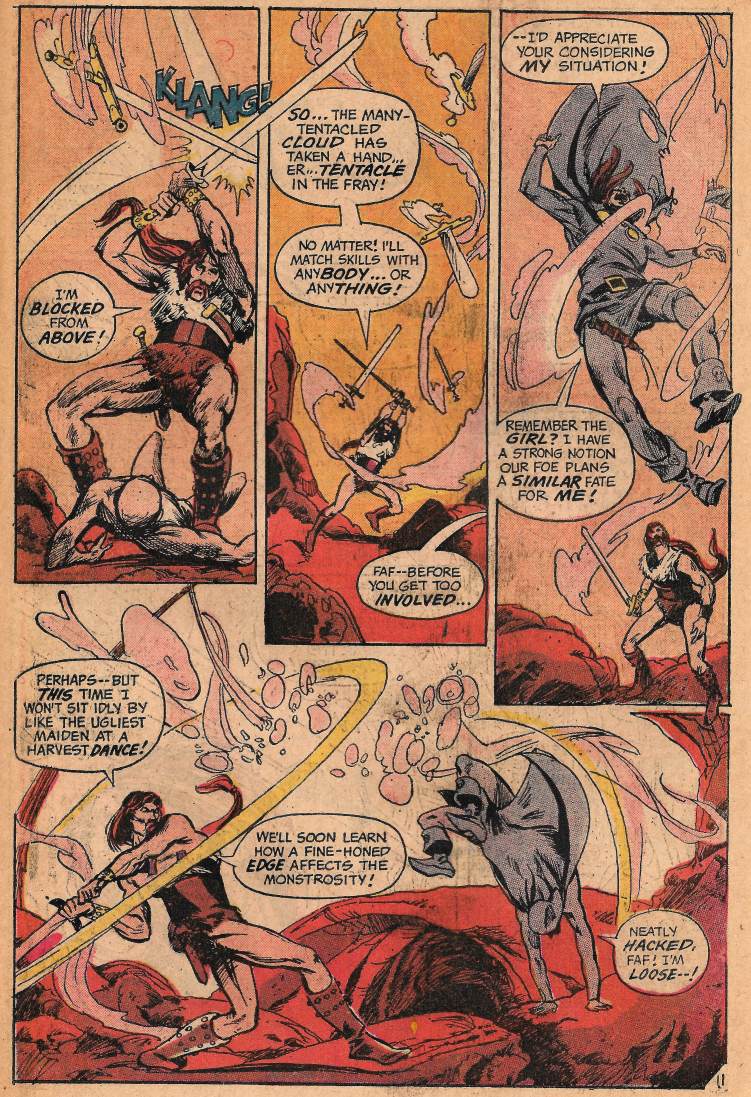 …and Fafhrd thinks he detects a weakness in the cloud’s center eye, however that part is thirty feet over their heads. 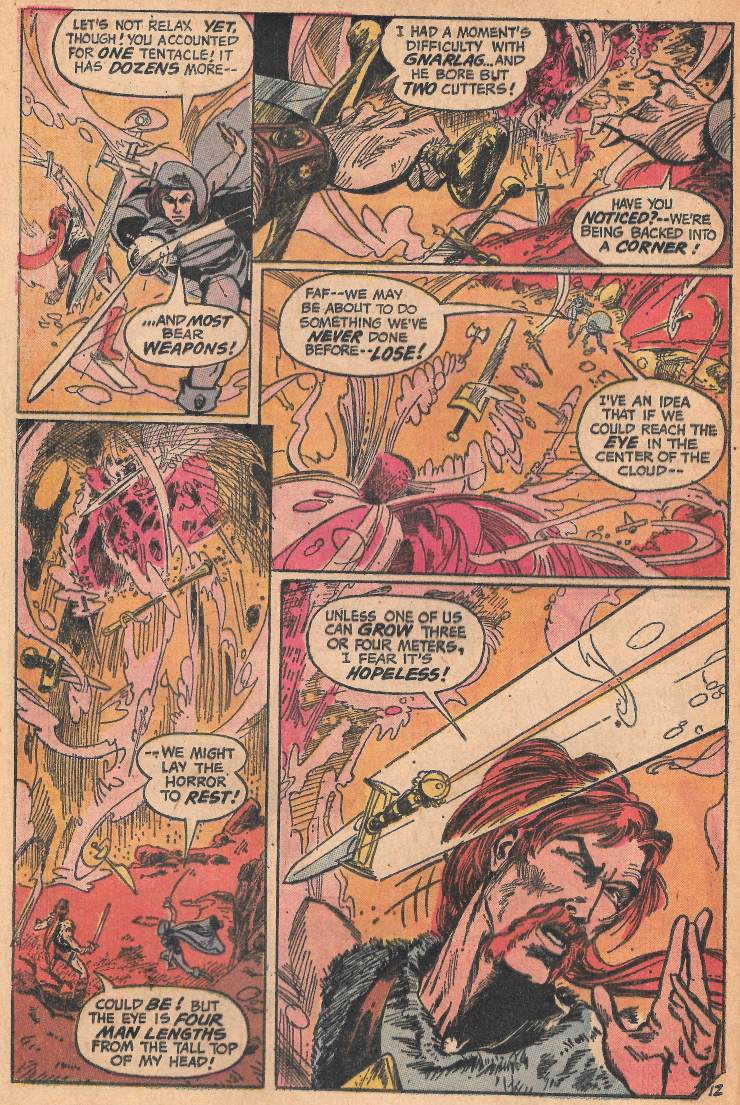 Just as suddenly, a lucky swipe of the cloud disarms them both. The pair is not out of tricks yet. Using his dagger and Fafhrd as a trampoline, Mouser vaults into the air… 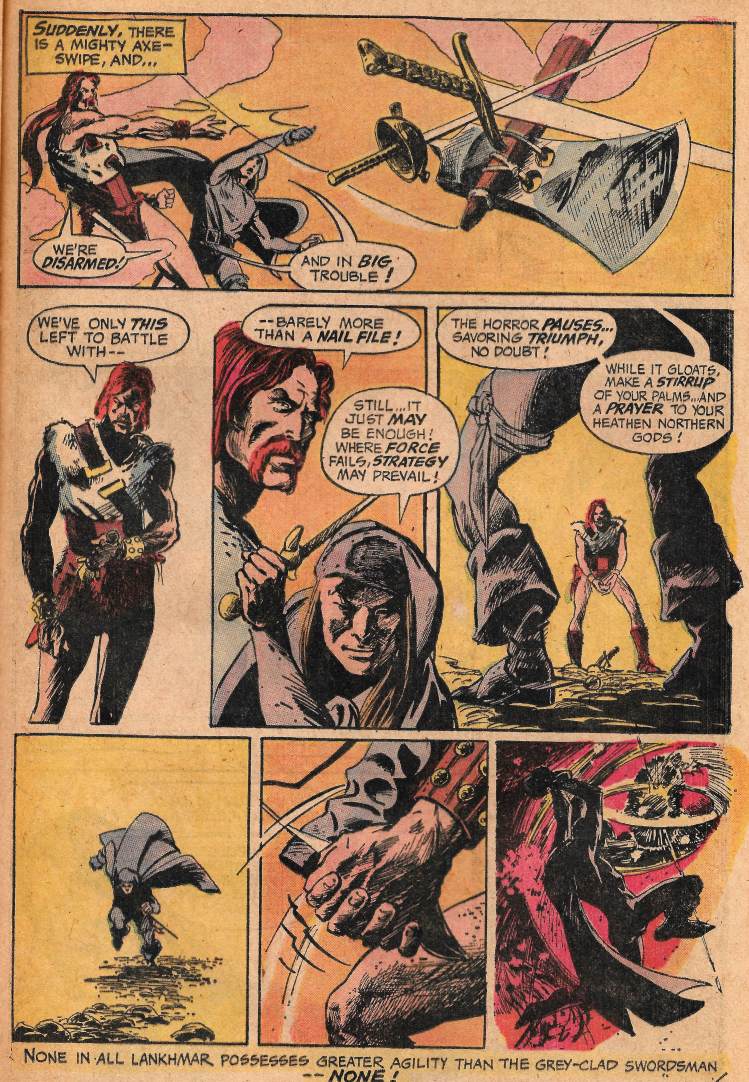 … and pierces the eye in one blow. As the cloud dissipates the pair leave, none the richer and quite a bit more in need of a warm tavern. 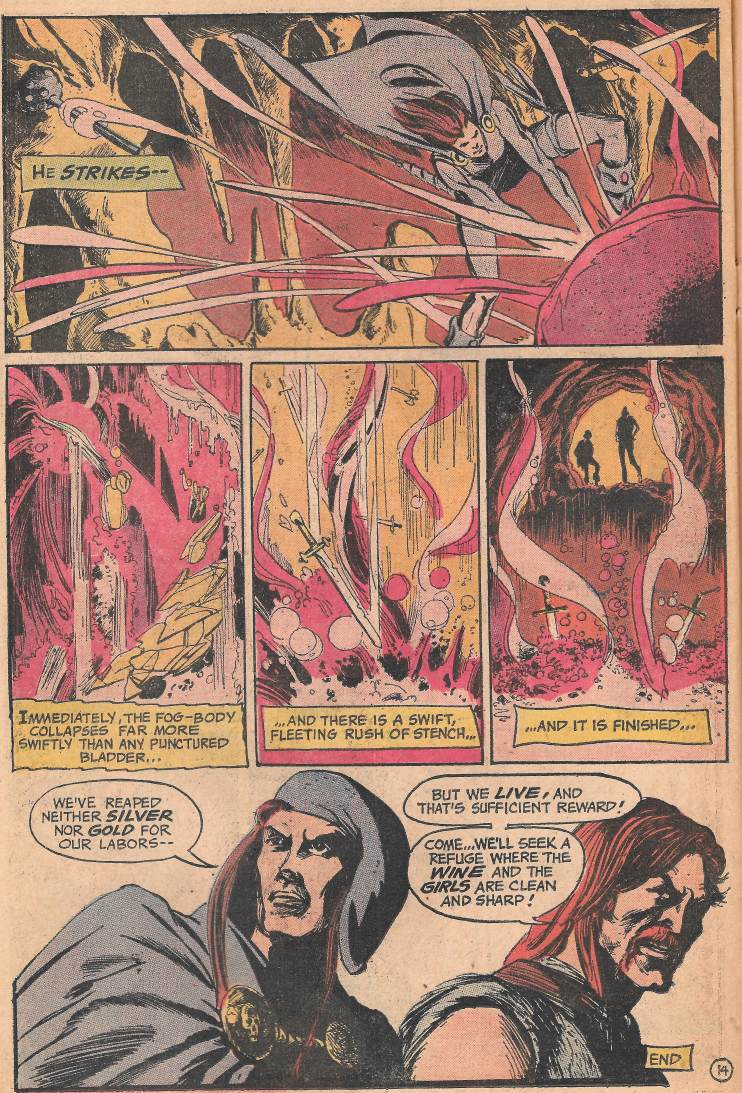 Love this so very much. Makes me want to re-read the books, which it captures much of the tone of. As an added bonus there is a second story here too. And guess who’s doing the artwork?

Whoa! O’Neil is adding to the mythos here but I’m game if he can match the flavor of Leiber’s writing and look who is putting pencil to page for this: Walt Simonson. It’s like Christmas came way early this year. 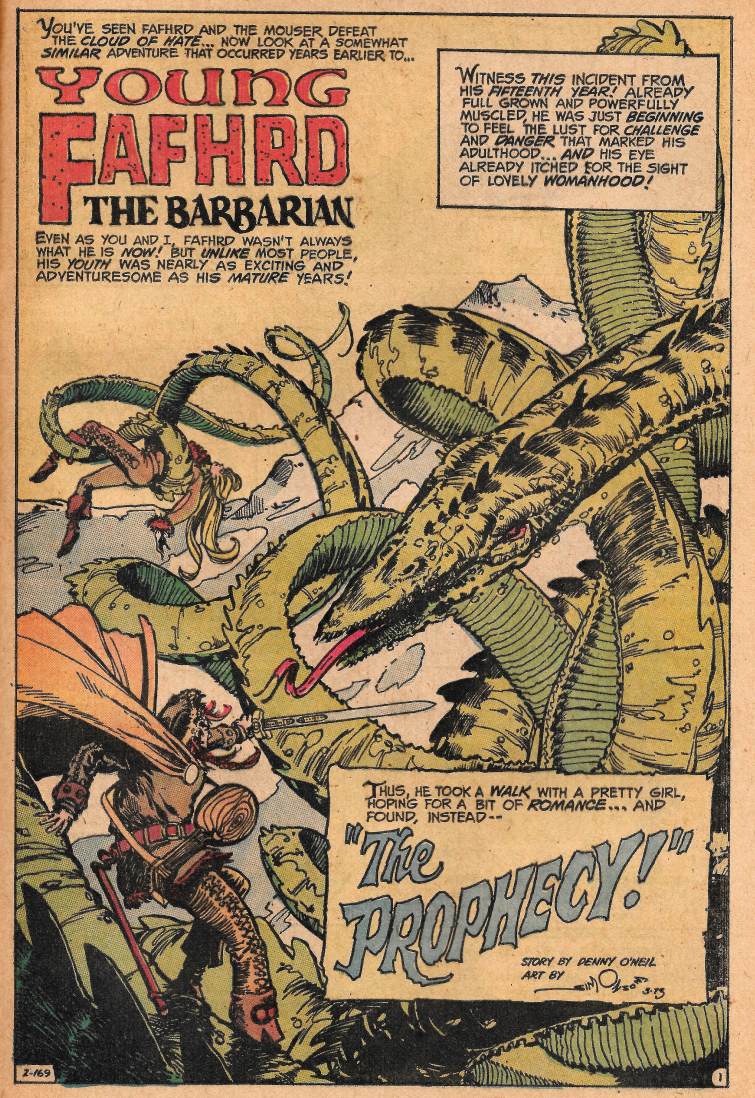 After our splash we are presented with a young, beardless Fafhrd, a comely ice maiden for him to desire, a old man with the appearance of a wizard…and a prophecy in the form of a riddle. 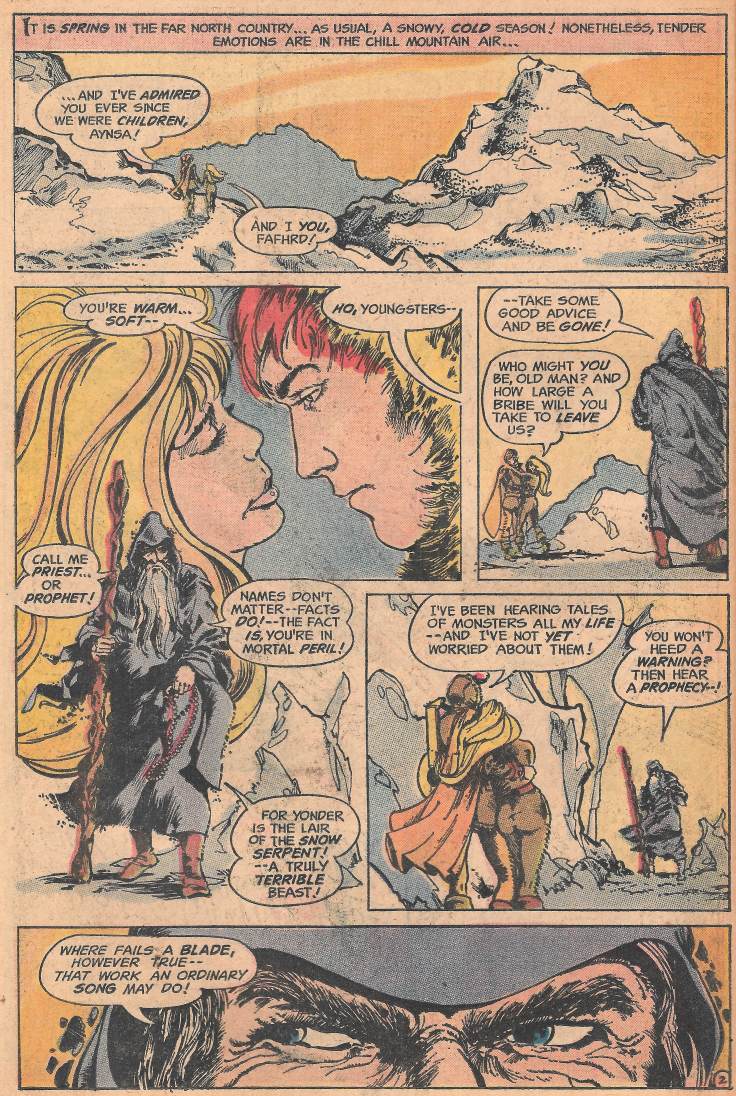 As they leave the old man, Fafhrd attempts to woo the young lady’s heart, but the aforementioned ice worm is seeking it as well. (LOOK at that bottom panel! LOOK AT IT! Man, Simonson can draw!) 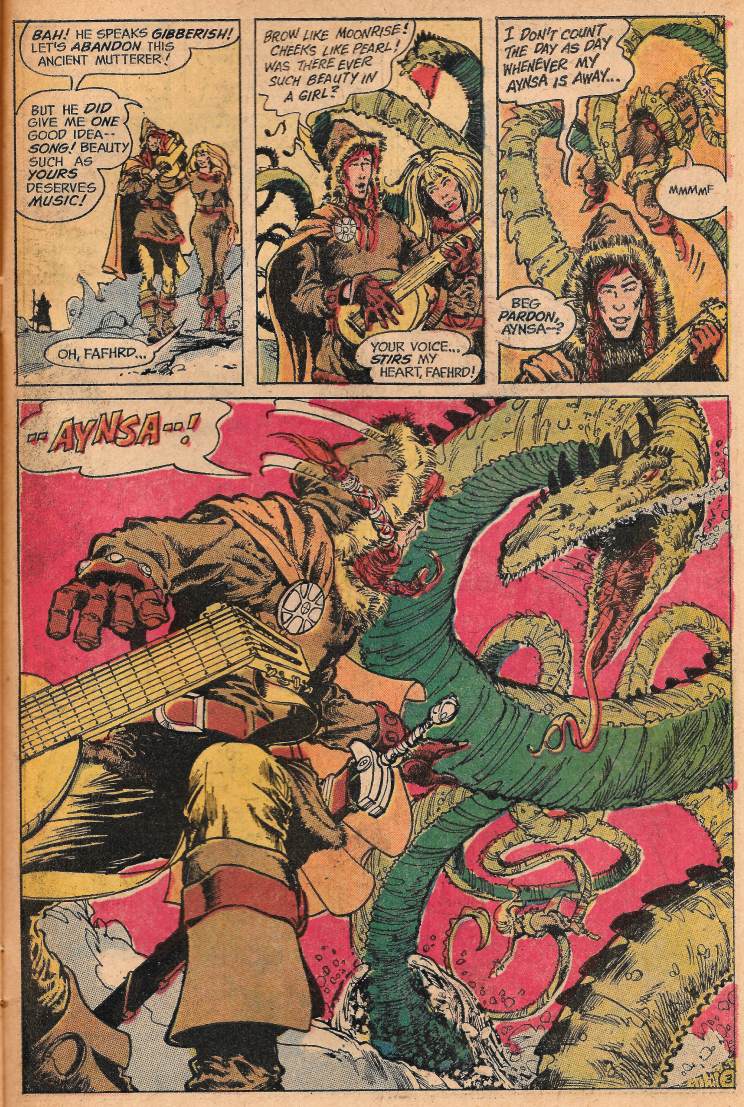 Also as the prophecy states, Fafhrd’s sword does no good against the beast. The steel ends up shattered by one of the worm’s bites. Yet Fafhrd battles on… 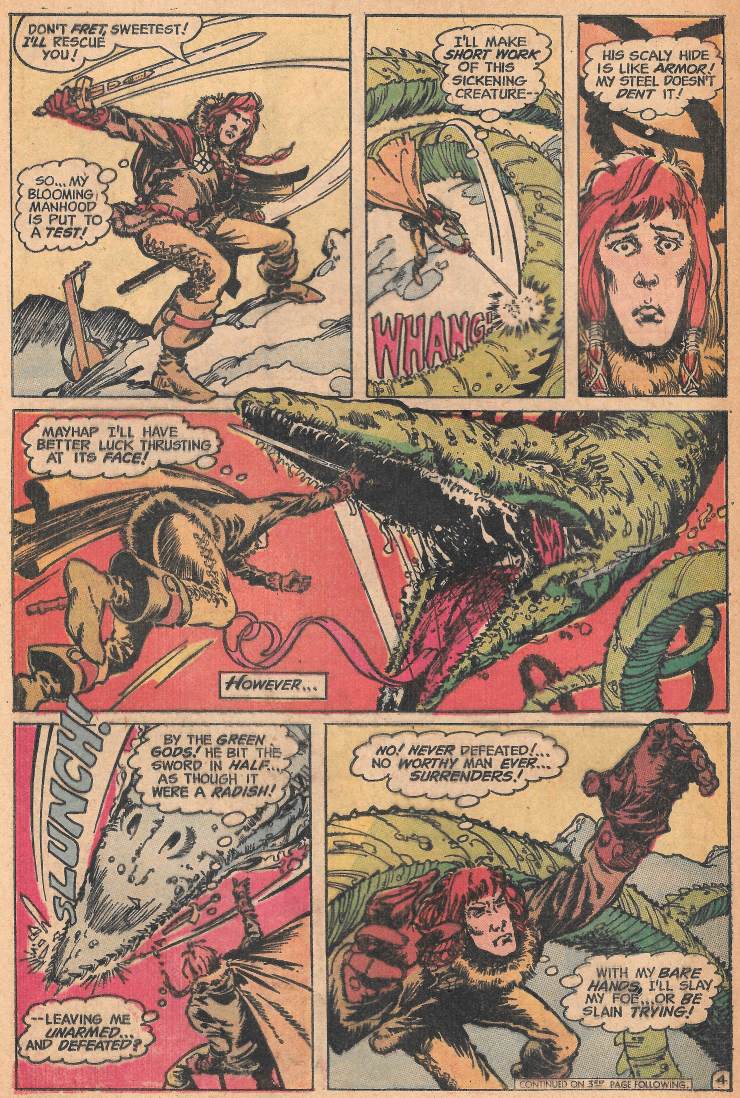 …but he can do nothing save watch the beast escape with his love and then sing a song of mourning. 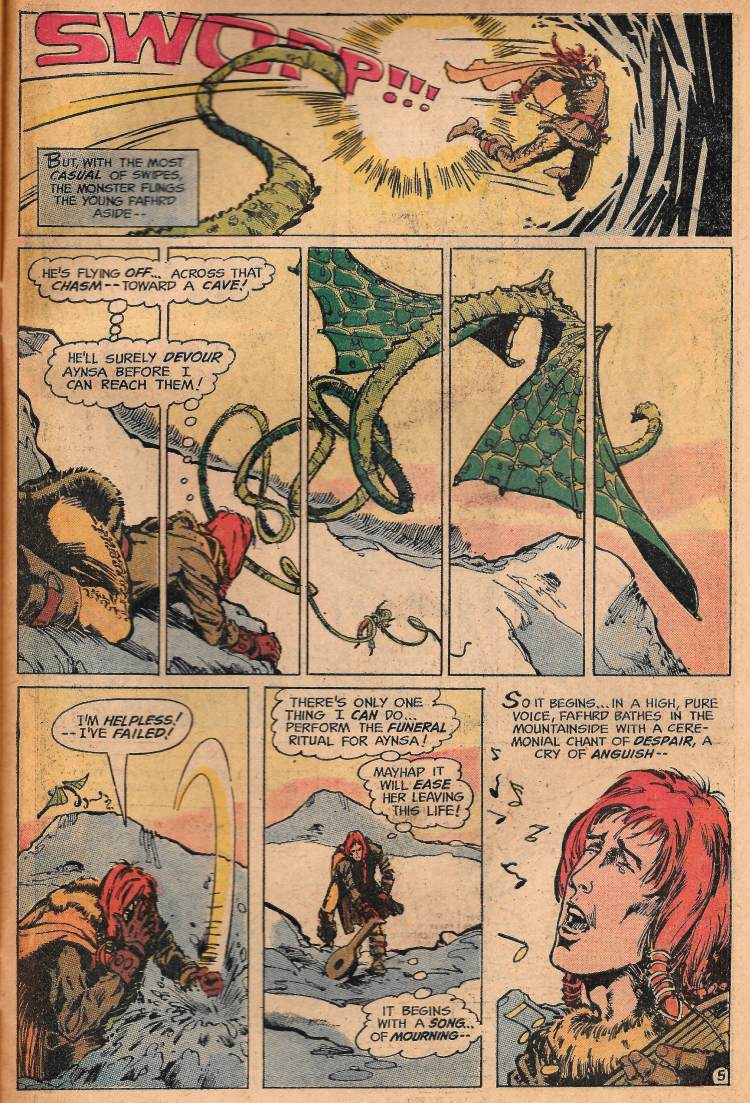 And his singing causes a giant icicle to fall from the cavern roof and kill the beast. As the lovers walk off, the wise man appears enshrouded in fog, repeating his prophecy… 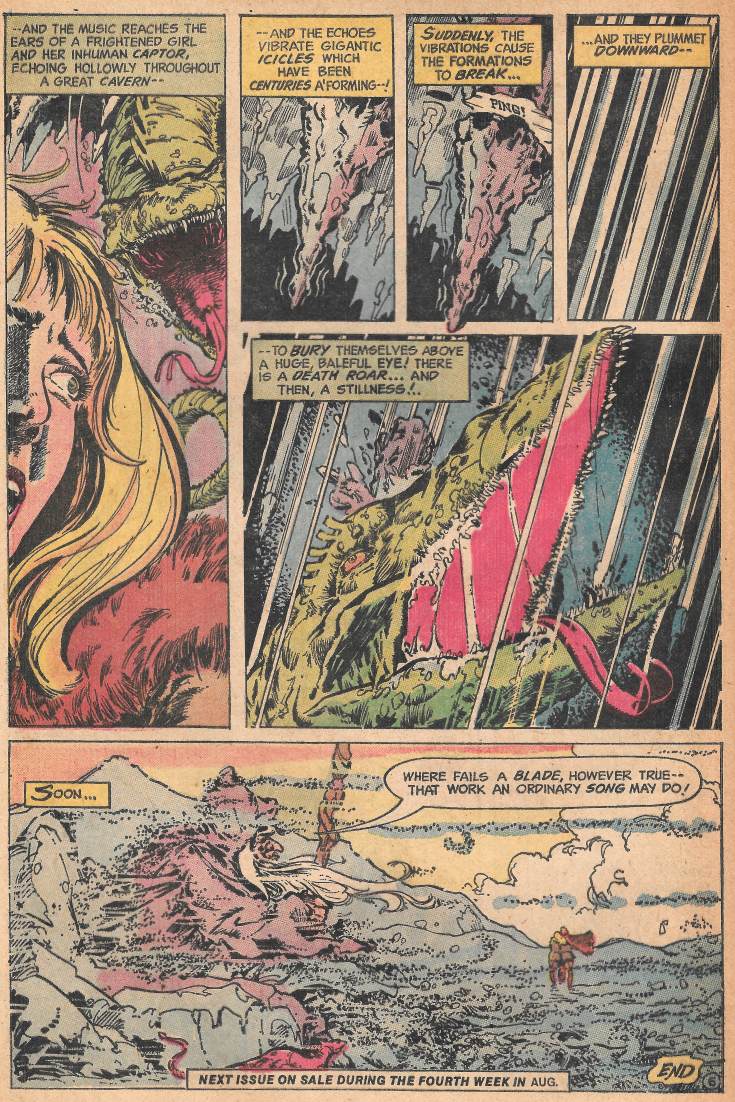 …That was kind of neat. Great art with a fair to good story. Enjoyable even if it doesn’t add much to the Nehwon mythos.

Noteable: if you like these stories or the Leiber originals, you should check out Tales ofthe Weird on Youtube. They feature readings of some of the Fafhrd and Gray Mouser stories and are highly enjoyable!

Sadly, this book was one issue away from the title’s cancellation due to poor sales. We never got to see the Issek the Jug story Lean Times in Lankhmar that was so magically, ironically set up in prose. Never got to witness The Curse of the Smalls and the Stars as it drives our principle characters to deadly distractions. Completely missed the Bazaar of the Bizarre with the notable characters Ningauble of the Seven Eyes and Sheelba of the Eyeless Face…(oh, and those are the GOOD guys in this tale.)

Most of all we missed seeing Chaykin and Simonson on pencils with Wrightson, Kaluta, and Simonson on inks doing that special kind of magic that only they can do…and doing it to two special and magical characters.
Posted by SonOfCthulhu at 3:06 AM