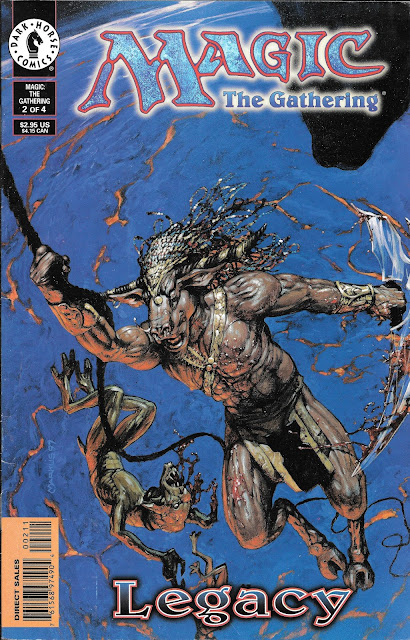 I always thought I would like Magic: The Gathering’s deck building game. The more adultish card art and the Dungeons & Dragon’s look and feel of the setting felt like something I would gravitate toward. 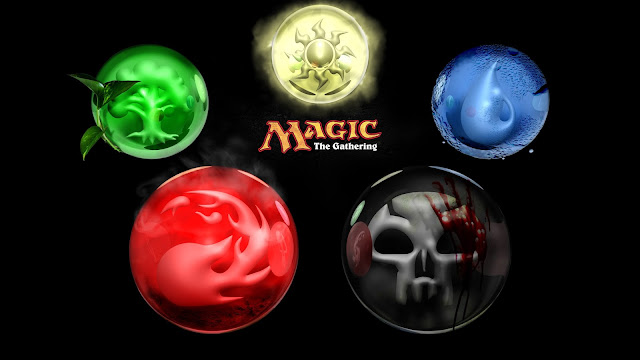 However, the game play is really more of the same Pokemon-type action. You play a wizard who is using his cards to duel the other player/wizard using land, spells, artifacts and creatures depicted on the cards. Add to that a complex rule set and I was out. My son learned how to play it at daycare, which shows that I was possibly wrong about the difficulty level, but for now I’m sticking to Pokemon (which I haven’t quite gotten figured out all the way.) 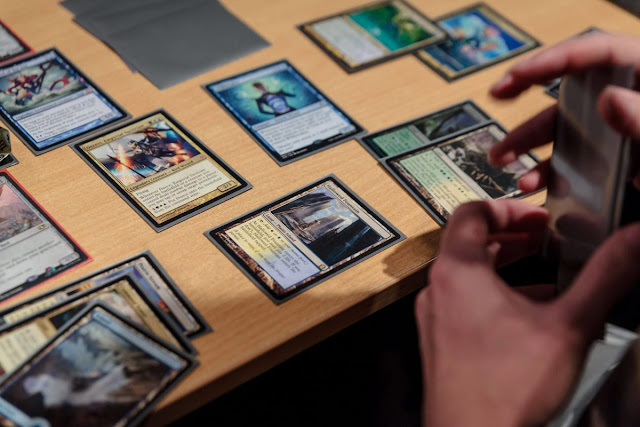 You’d assume the books for this would be more accessible and you’d be mostly right. This particular series might have made much more sense if the Crapbox had allowed me issue number one as a starting point. As it is, SoC has arrived behind and in trouble before he even hits page one.


Let’s see if we can figure this one out together, how’s about?


We begin with two sky galleons in battle. The good-guy’s ship is led by acting captain Gerrard, who’s titular quest is to rescue the ship’s actual captain who is being held by Volrath, the owner of the ship that has latched on to them and his forces are preparing to board them. Note that the bad guy Volrath isn’t on the ship, but his second in command, a bald guy who’s name we never learn leads these forces. 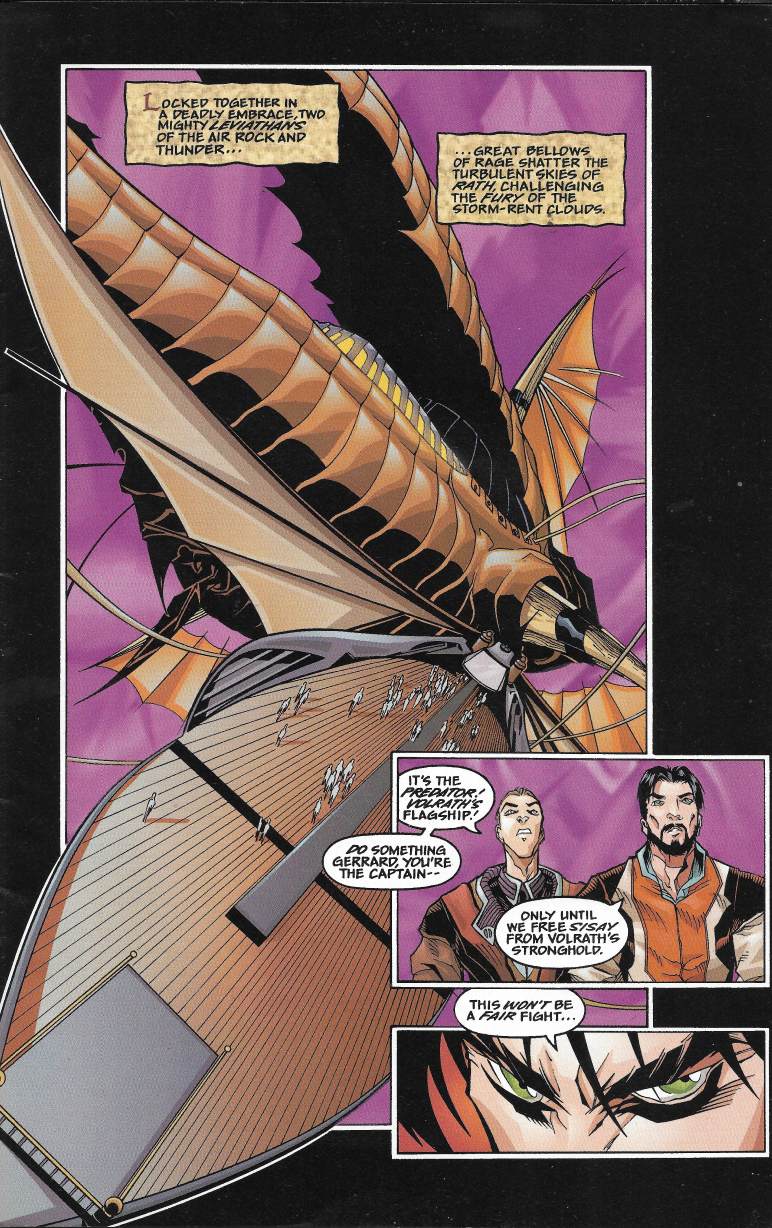 Also on board the good guy’s ship is an iron golem called Karn, who is also known as “The Legacy.” The golem walks and talks, but doesn’t attack anyone, and in fact seems reluctant to do so. He is somehow Gerrard’s, though whether this is by way of property or prophecy is unknown. What is known is that Karn is a hot commodity, and I assume his card is highly prized by players of the actual game for some reason.

In story terms Karn is just a MacGuffin for the characters to fight over. He doesn’t appear to DO anything and if I had a Karn card I would expect it to say “This being is a pacifist who adds nothing to attack nor defense and just mopes around.” But his subtitle is the reason for this series, so fight for him you lazy bastiches. 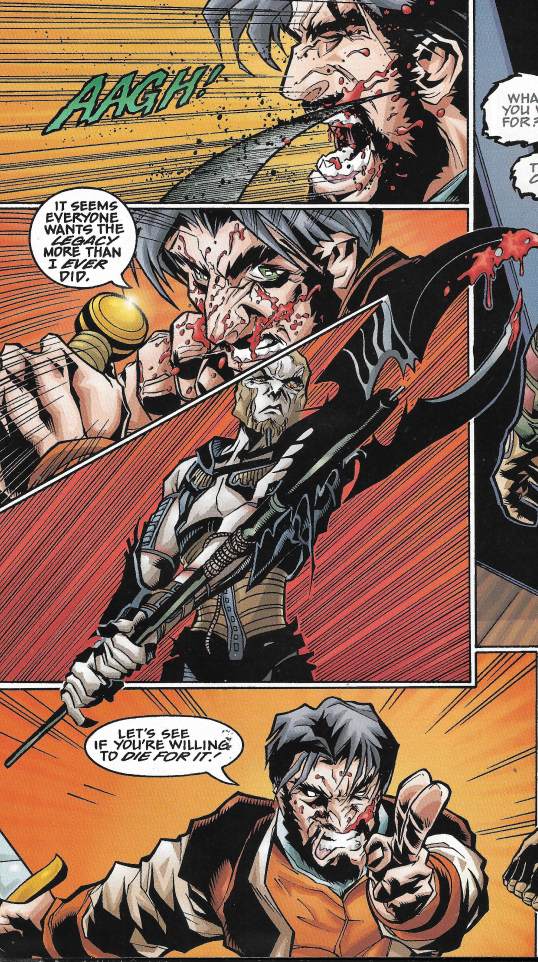 Ow! He should get that looked at! Except in the next moment a blast from the other ship sends him hurling over the railing to his death. Next issue: Someone Else’s Quest, part 1! 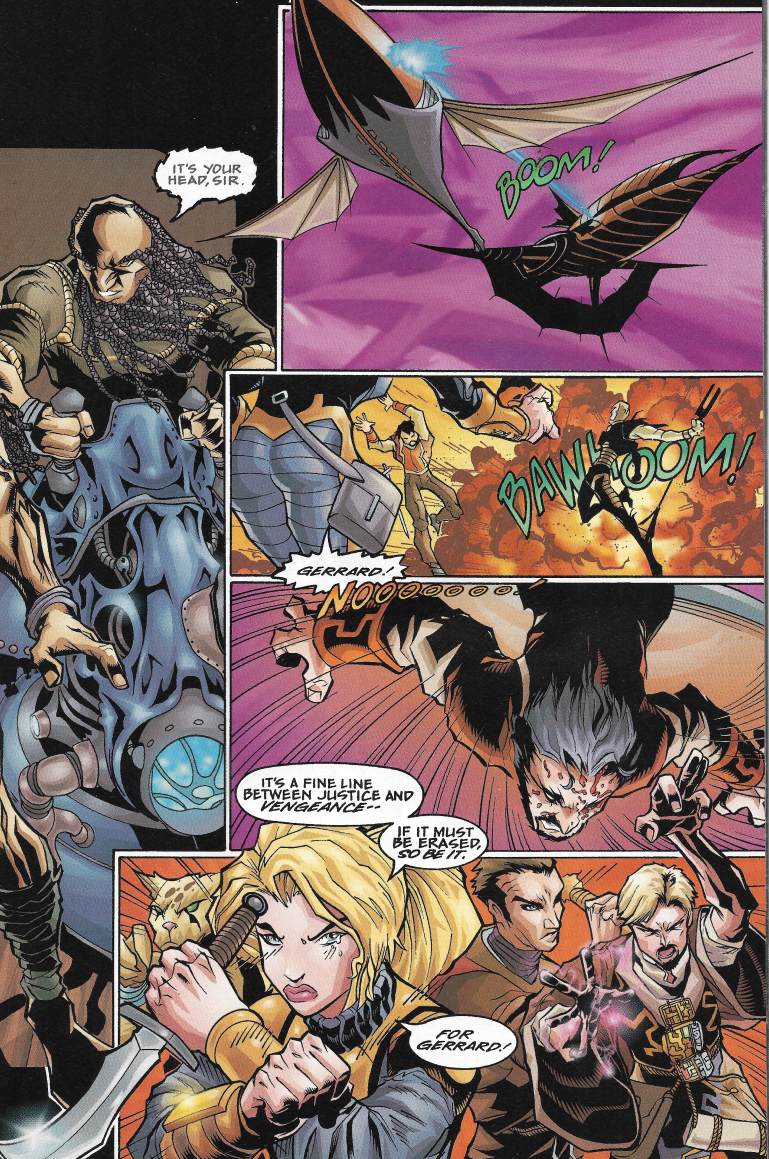 The other ship decides to withdraw, so the minotaur first mate of  Gerrard’s ex-ship (since he’s dead and all) jumps on to the trailing ropes of the bad guy’s departing ship unnoticed. 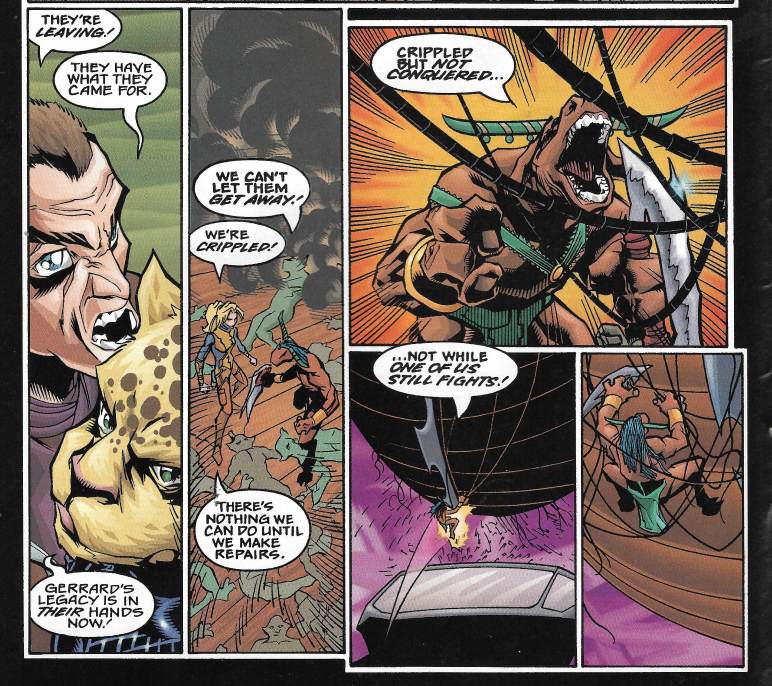 Meanwhile, in a way that can in no way be a meanwhile if physics is relatively the same in both our universes, Gerrard is still plunging to his death. And while he does, he decides it’s time for some flashbacks.. 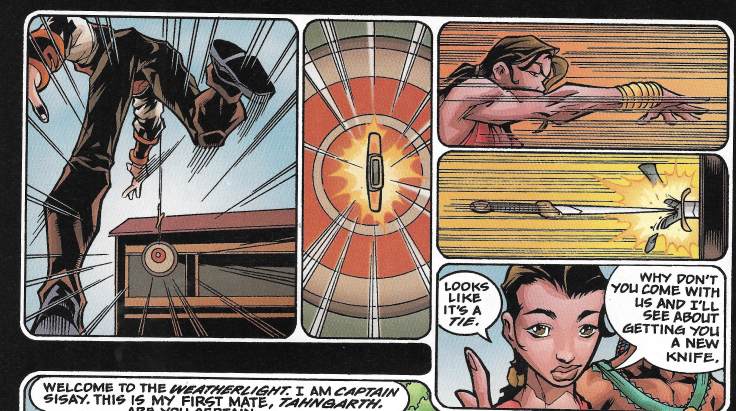 …and she tied him by some impossibility of physics. I mean metal has to be traveling at bullet speeds to be able to embed itself into other metal. It is no surprise that these knives act like arrows though, because I just now notice that the writer of this mess is Mike Grell, who is clearly asleep at the wheel. Possibly while mumbling old Green Arrow plotlines he is dreaming about.


Sisay goes on to show the trio her airship and her surly minotaur first mate, who learns to bromance with Gerrard and is currently hanging from the bottom of an enemy ship. 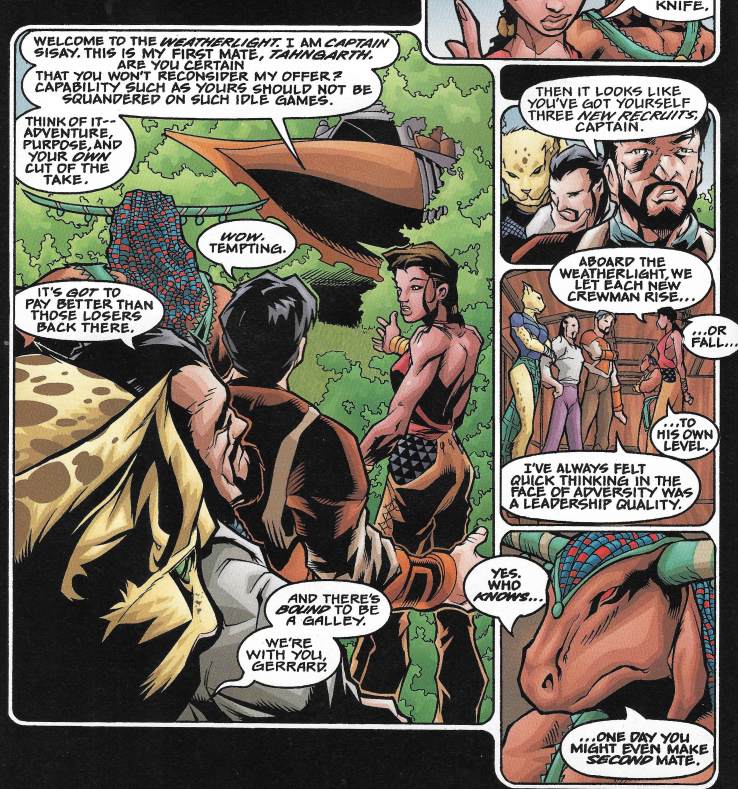 And then he remembers a conversation about how he should want his Legacy because otherwise people are stealing from him. Which would work better plotwise if they told us what his Legacy actually was other than a walking metal mannequin. It’s only issue two, guys. Okay to rehash the important bits a little. 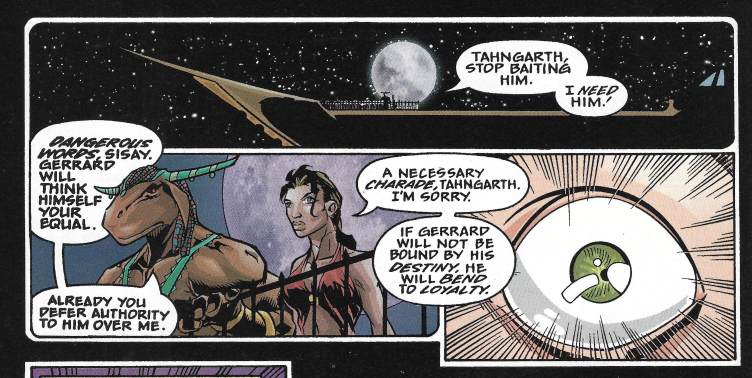 …and then he wakes up right before pancake time, only to be swooped up in the arms of a bad girl angel-human character. 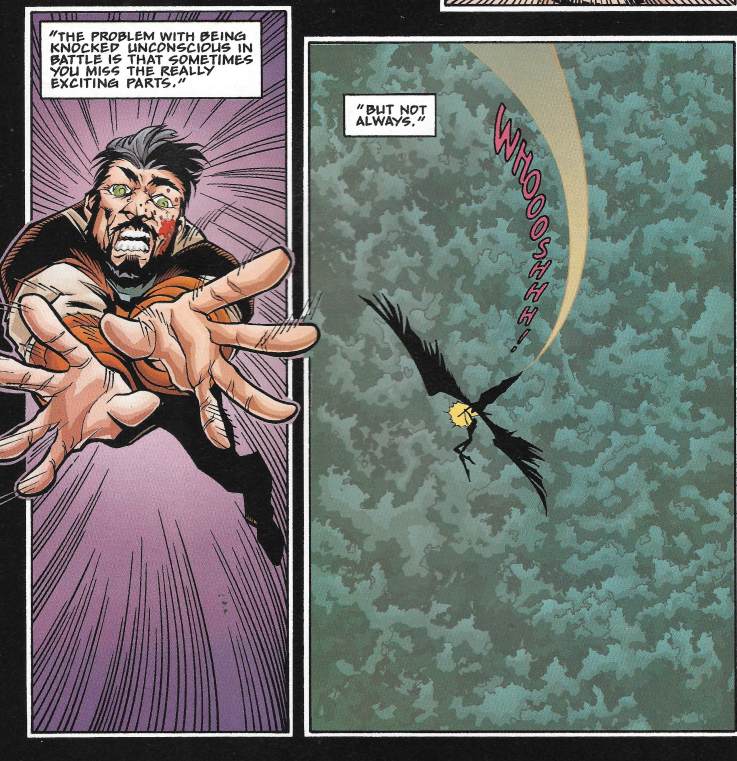 …whom he then decides he’d rather die than allow her to take him back to the bald bad guy that blew up his ship, kicking off at just the right moment to full a mere seven stories to the ground instead of several hundred yards. 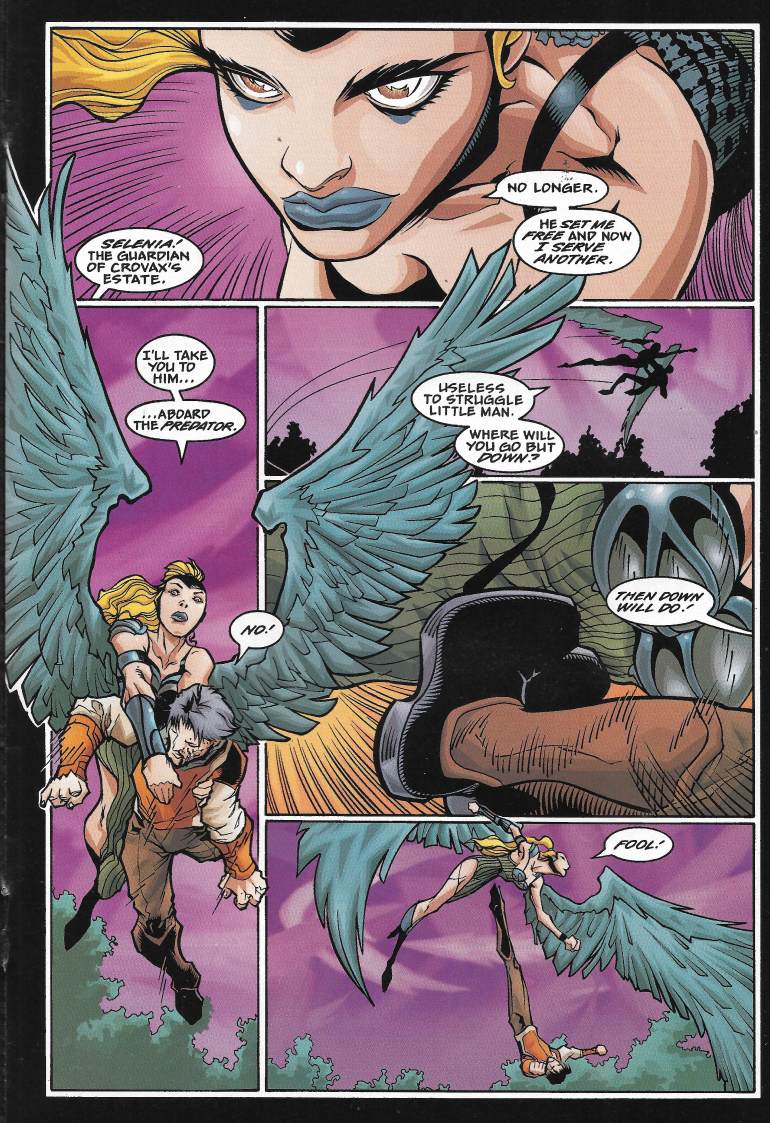 And most of that he’s ping-ponging between tree branches like some weird pachinko machine ball. When he does finally land, he’s so well hidden that Selenia can’t find him again. 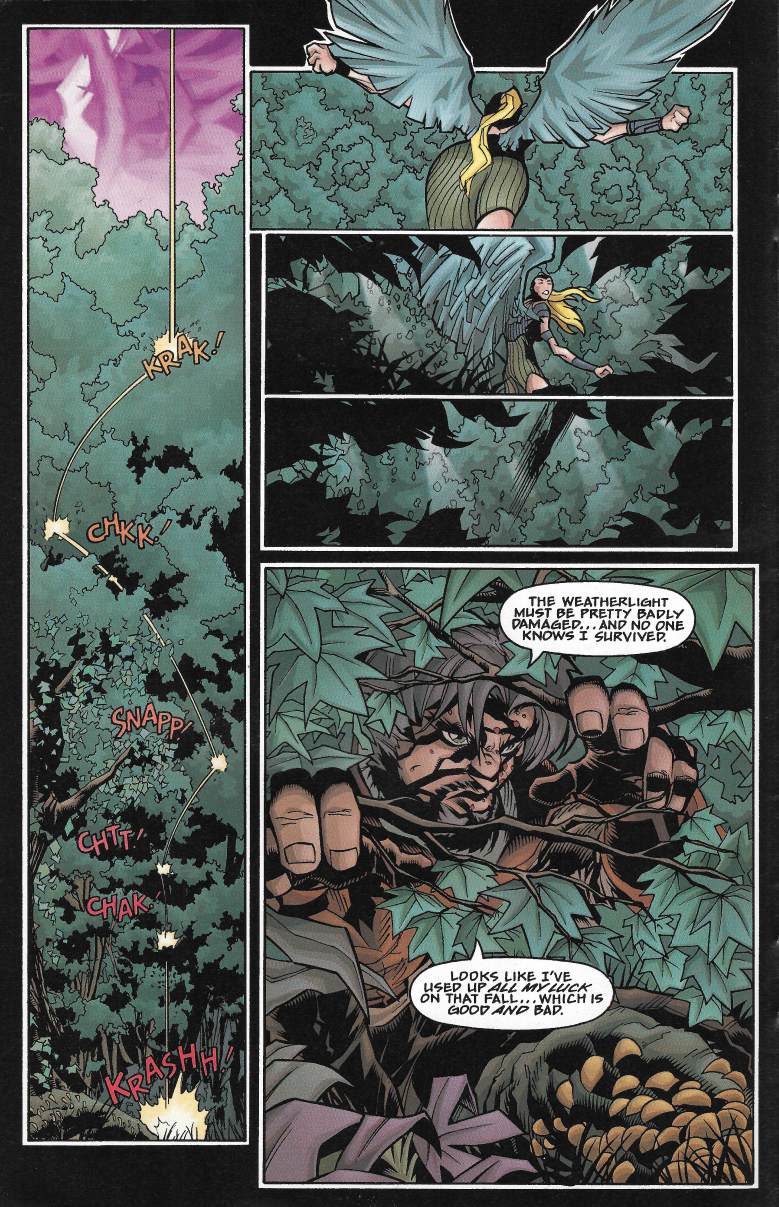 Meanwhile, on the bad guy’s ship we get a little of that strict discipline, as the guy that fired on the head bald dude and Gerrard going at it gets a flying lesson… 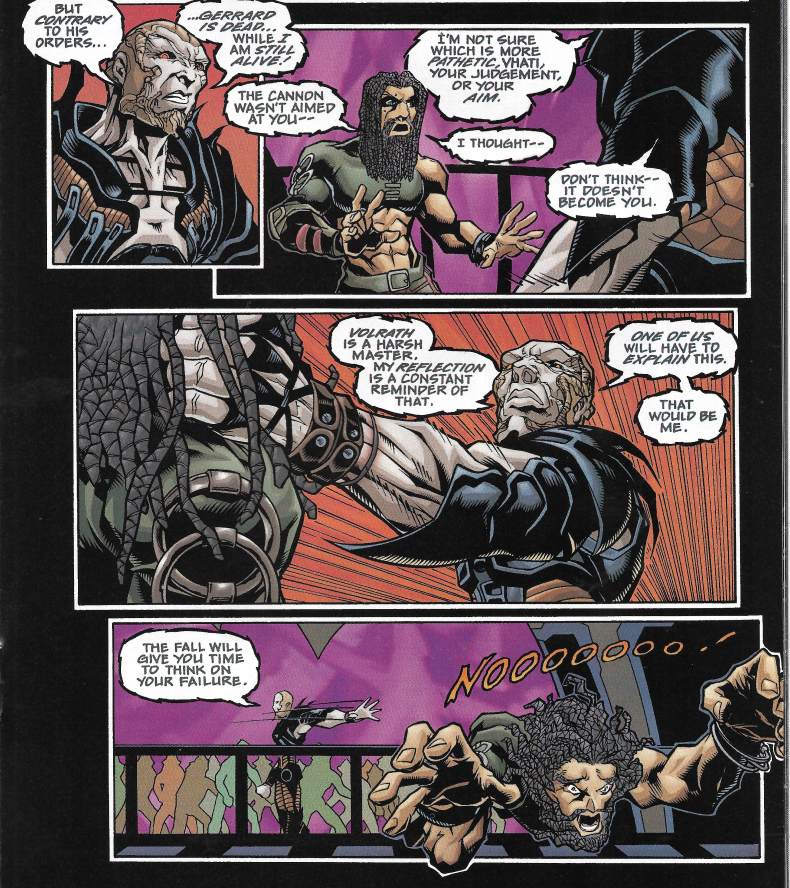 I wonder what conversations he’ll remember on the way down that he was in no way part of.


Guess we’ll never know as we stick with characters on the bad guy’s ship and those plummeting off it. Speaking of those, Selenia arrives and states without reservation that Gerrard is dead. I’d warn her about lying to this guy and how it might net you a toss over the railing, but I don’t think it would really worry her. 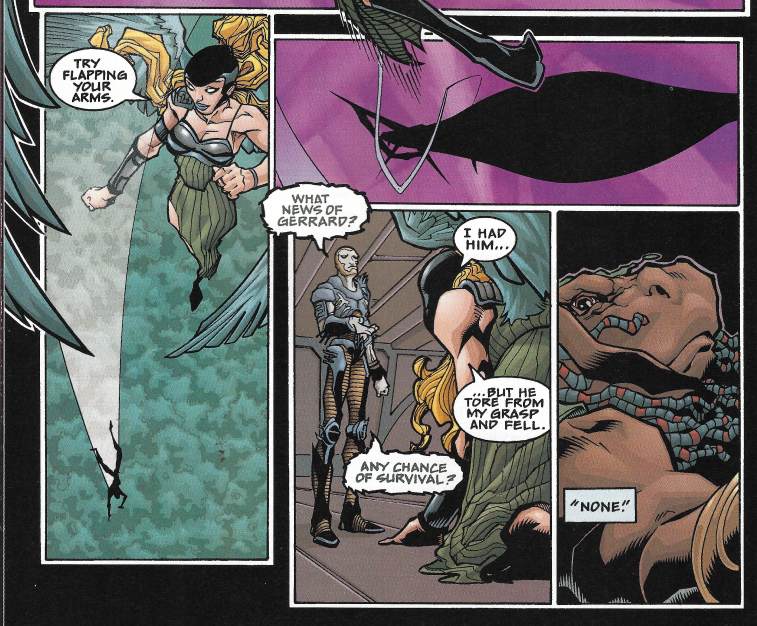 Meanwhile, below decks, the minotaur first mate wakes up and without even hurling to his death he starts having flashbacks concerning himself and Gerrard. And they are really weird memories where Gerrard get struck because he’s drinking at a bar with a crewman instead of “earning the crew’s respect.” Whatever that means. 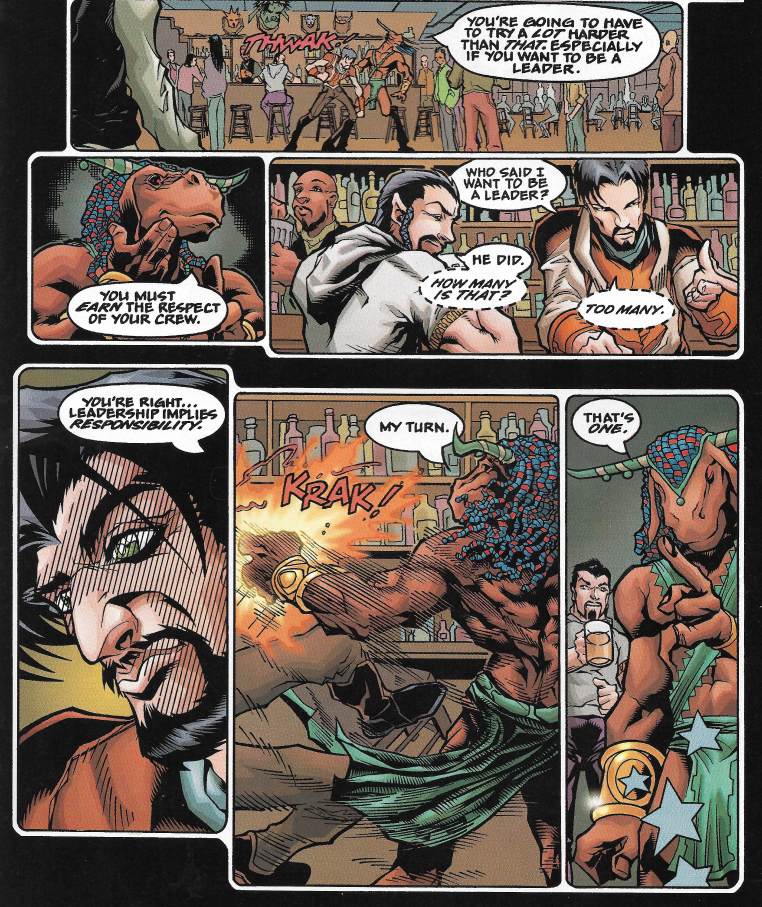 It gets so bad between the two of them that the bartender tries to throw them out, and instead they deck him and start a bar brawl. What does this have to do with anything? Well, cow head keeps bringing up how he doesn’t respect Gerrard because of the whole not getting his Legacy thing. I don’t know. The book is in the brambles of a story that it can’t seem to find the trail of to follow. 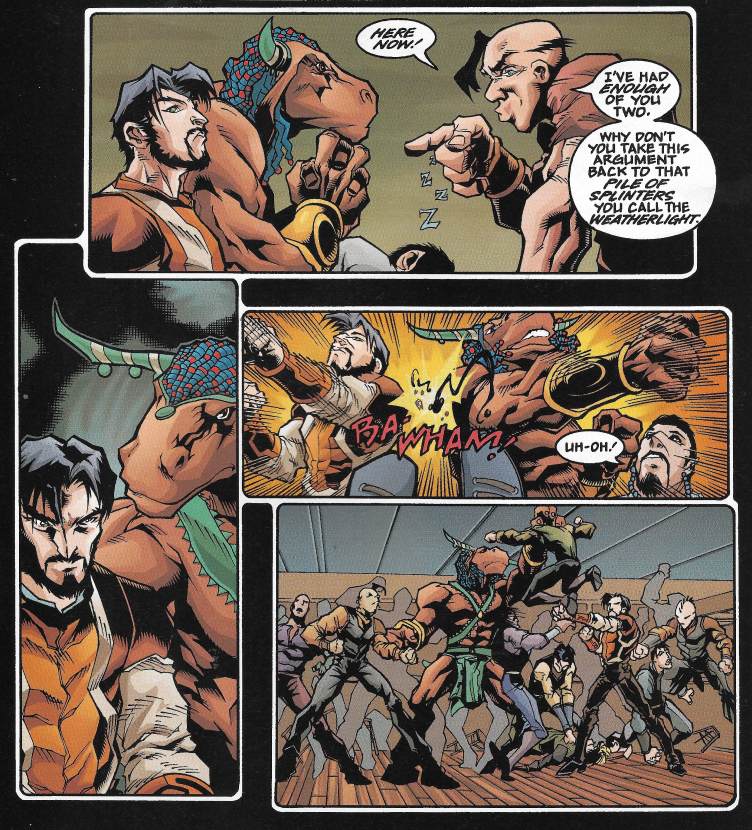 Then a page of the minotaur sneaking around in the hold and beating up a monster dog (because we need a page of that instead of ANY explanation as to why we should care at this point...) and then he finds Karn.

Whom, as he is rescuing, they have this brief chat about fighting back against their aggressors. Karn has become a pacifist since killing a guy, so he’s going to be no help in a fight and after finding half the ship’s crew behind door number 1, it appears they will have a fight on their hands very soon. 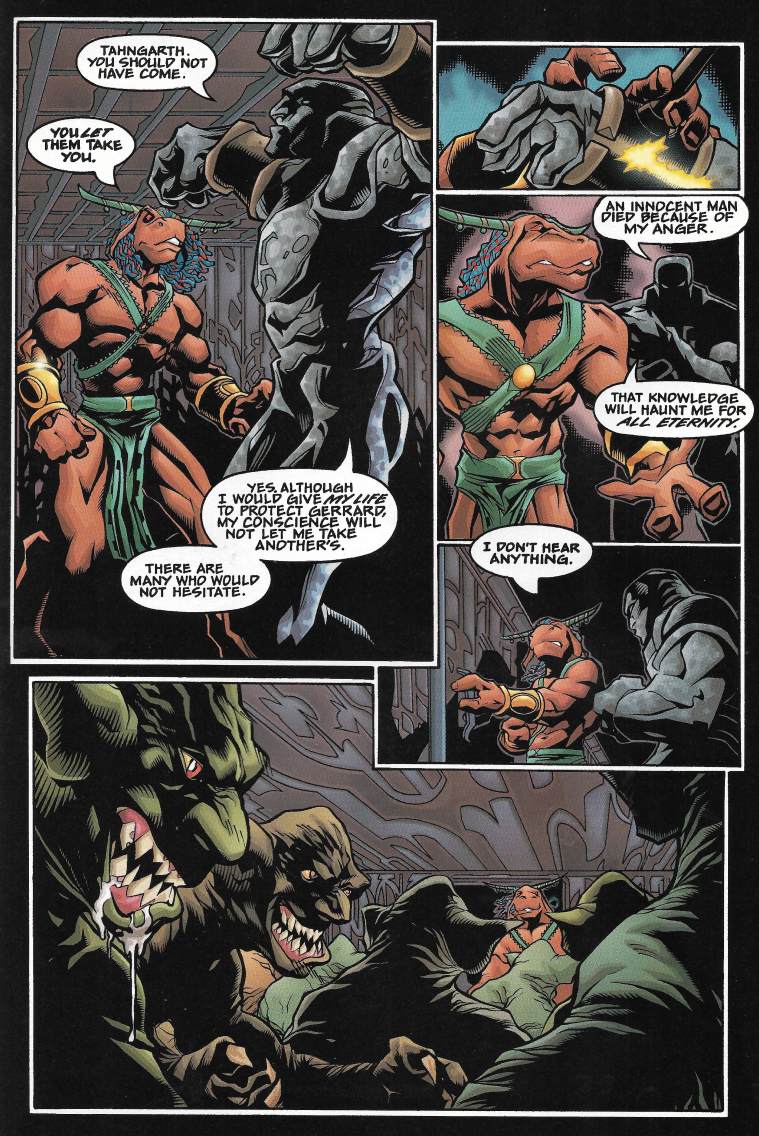 I like how stupid this next panel is. YES, they saw you! And Karn seems worse than Marvin from Hitchhiker’s Guide fame, all mopey and depressed. From here on out I’m reading any word balloons from the silver golem in Alan Rickman’s voice. 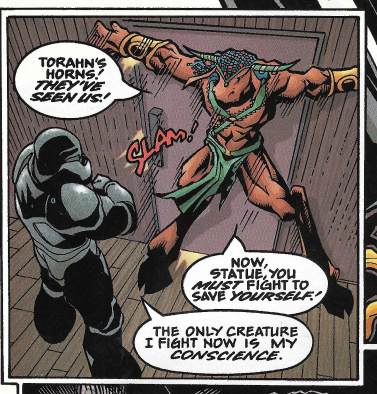 There’s a short series of panels showing a battle between minotaur and the crew and then bald guy shows up and speaks his name…OMG, I totally missed it the first time around. But that just goes to show you how interested I am by this point in the book. 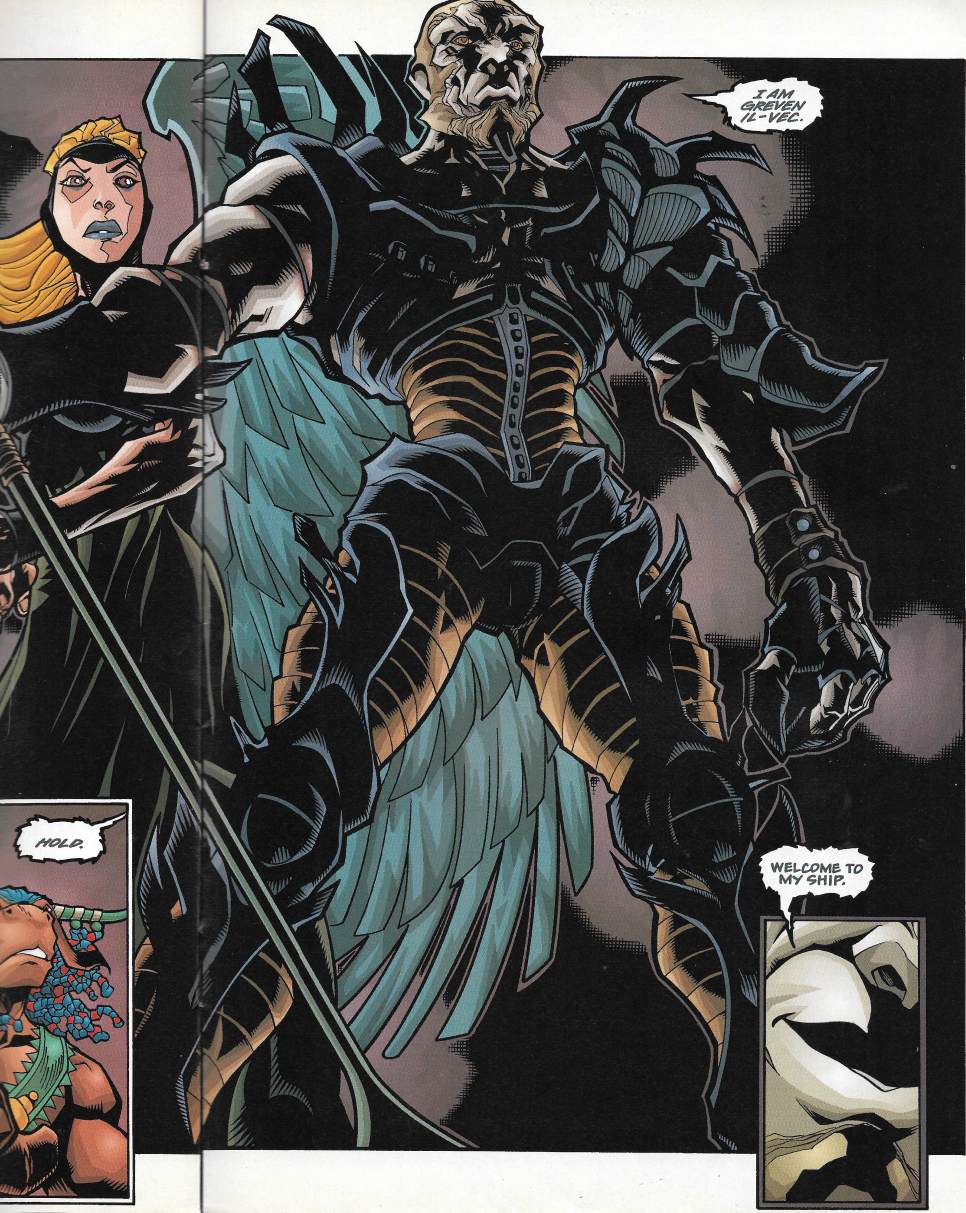 So…uh, I’ve already forgotten who the bald guy is again. Whatever his name is beats up the minotaur…

…but doesn’t kill him because he wants to make him one of his crew. So it’s to be torture until he breaks, I suppose. I’ve got an idea. Just make him read this book a few times. 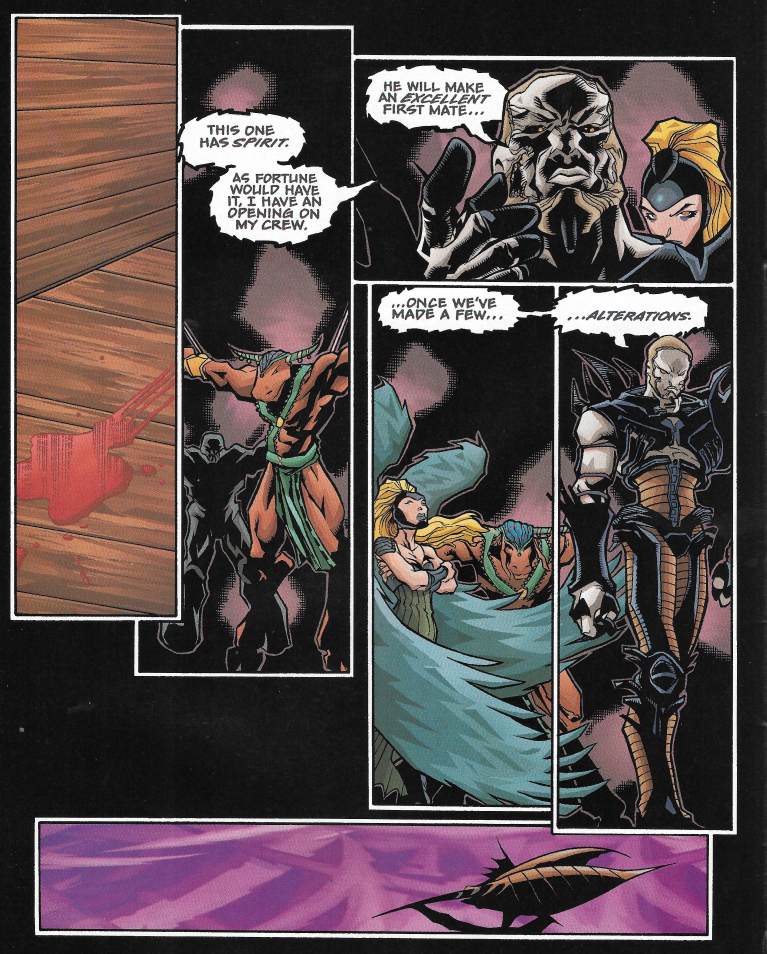 Gerrard’s Quest was the only Magic: The Gathering series that Dark Horse produced. They were preceded by ARMADA comics, a division of Acclaim Comics, with several short series and have since given up the license to IDW Publish, which has produced several as well. While I can’t state how the other series faired, but give these four wide berth.
Posted by SonOfCthulhu at 2:38 AM