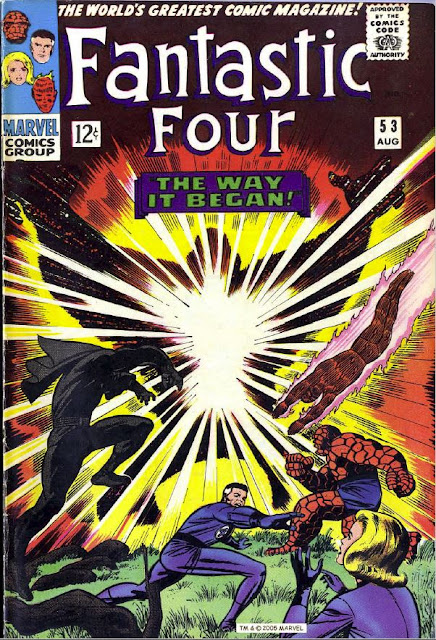 The origins of Black Panther and Klaw!

Yesterday we got the first appearance of the Black Panther, so today I thought I would double-dip into the same DVD for a look at his origin and the origin of Klaw, a villain who should make an appearance in the movie. I bumped into Klaw in FF 187, much further down the track. It was a great issue that saw him pair up with the Molecule Man, the guy whose legs we are peeking though and go a few rounds with the FF. His power set made him formidable and paired with old zig-zag face, Klaw almost cleaned their clocks. Had it not been for the timely assist of the very pissed off Impossible Man, who easily handled both villains, the FF might not have made it to issue 200.

But let’s take a step back to how we got to Klaw, how T’Challa became Black Panther, and why their origins are linked events. To do that we have to start where last issue ended up, with the FF now the Panther’s honored guests, eating well and watching the dance of friendship… 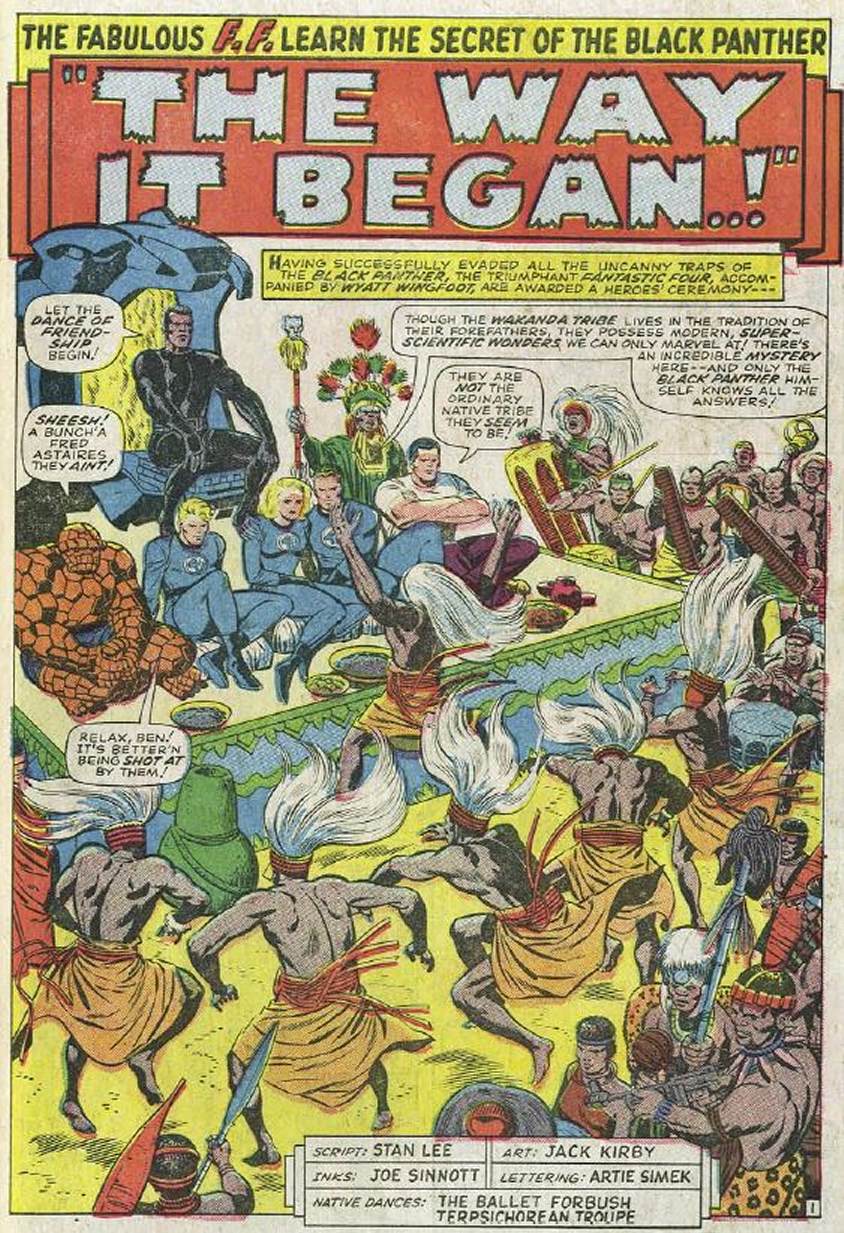 After which Ben acts a bit of an ass, which I interpret as him being upset at having his strength sapped last issue. He goes through most of this one both butt-hurt and stubbornly bashing his head into creatures that reflect your powers back at you. Even after Reed explains that what he is doing is useless. I think T’Challa hurt Ben’s pride. 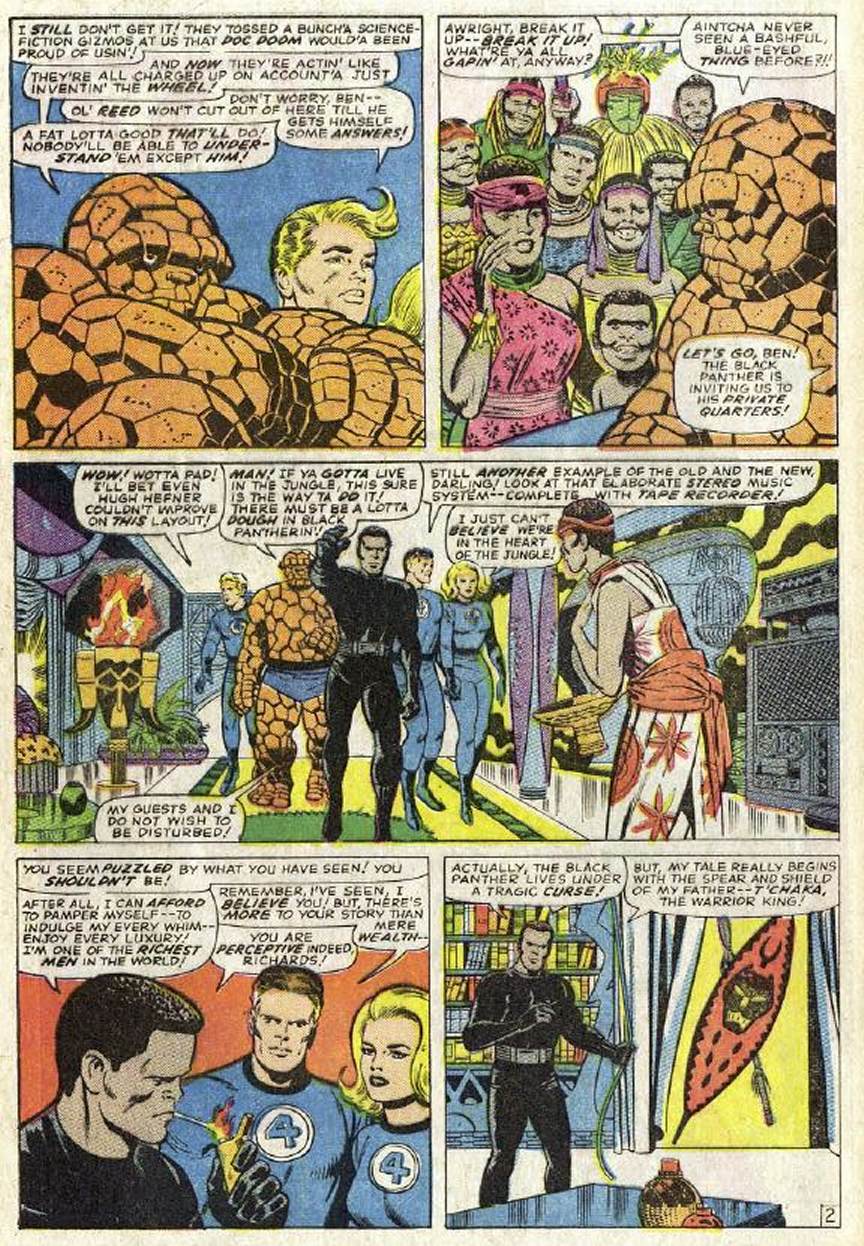 I love that bit about the tape recorder. And if you can see where Kirby put it, the thing is an old reel-to-reel. Don’t get me wrong, those WERE the height of convenience in sound recording at one time. I remember those days very well. And how you had to be careful not to get the tape bent accidentally when rewinding it or you’d have drop-outs in your playback. Times have certainly changed.

Just like time has made smoking something that is typically looked down upon as unhealthy. Here it’s seen as a sign of wealth and coolness. Let’s hope T’Challa drops the habit before he becomes Black Lungs Panther. Other eras…*sigh*

Getting to the meat of the dialogue, we learn that T’Chaka was Black Panther’s father and the leader of this tribe of warriors. Sometime since his death, T’Challa has used the lands resources to become the richest man in the world.

More on that in a bit though, as we look in on two members of a territorial patrol from a neighboring nation are investigating strange animal markings that they’ve come across when the find a huge hairless red ape. Their gunshots cause it to explode, dealing a great deal of force back at the men. 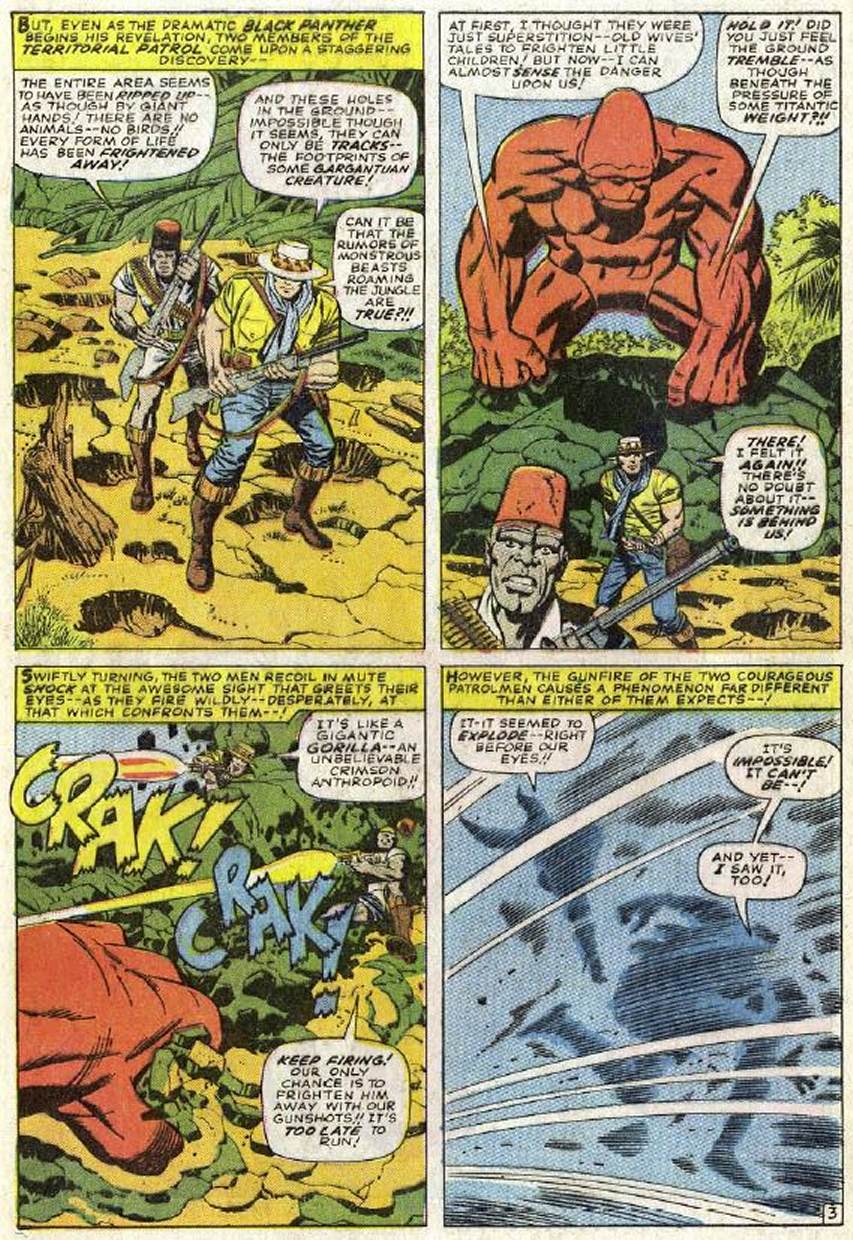 As they rise from the ground, they are assailed by another of the red beasts. This time the apparition comes in the form of a red, hairless saber-toothed elephant. 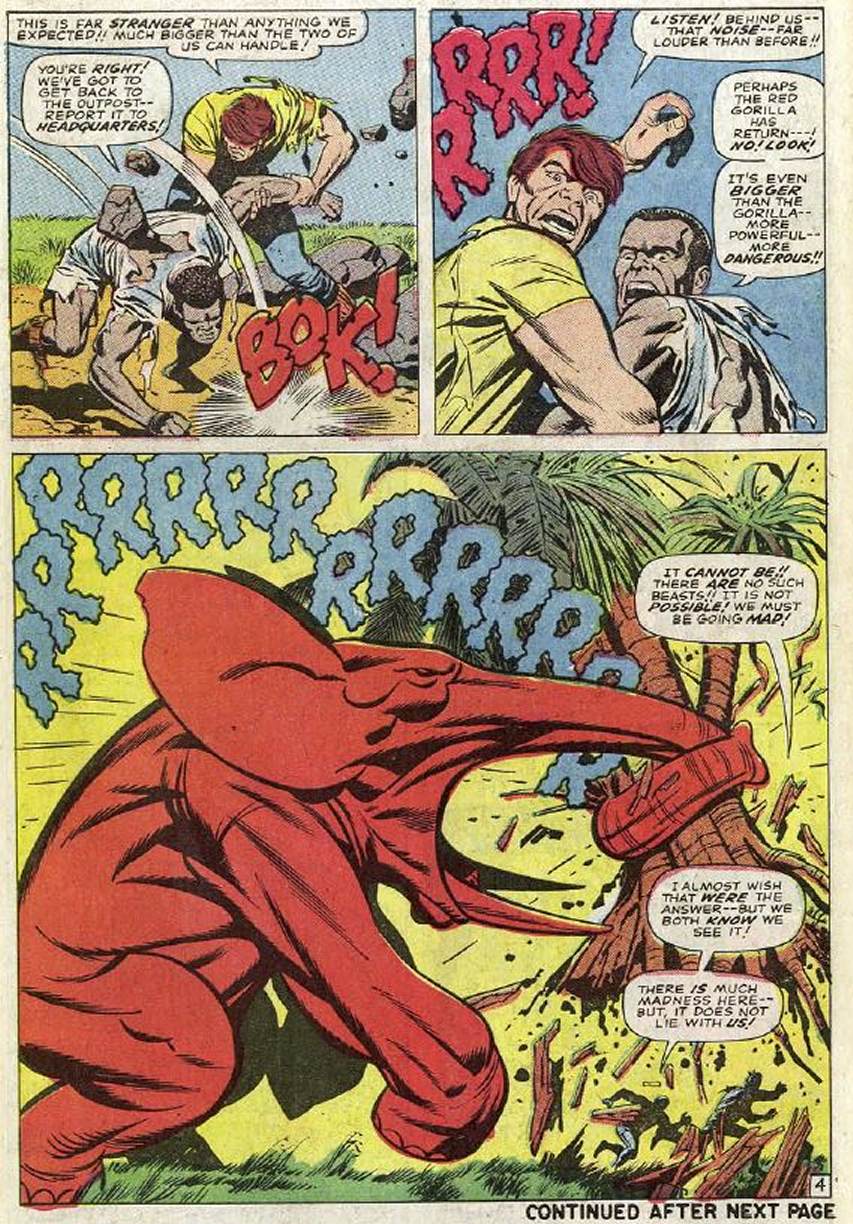 Now if I came back from patrol talking about giant pink or red elephants…Let’s just say they might ask me for a blood-alcohol test.

As the two barely escape with their lives, noting the animal appears to be heading back to the Wakanda boarder, we switch back to T’Challa’s story. 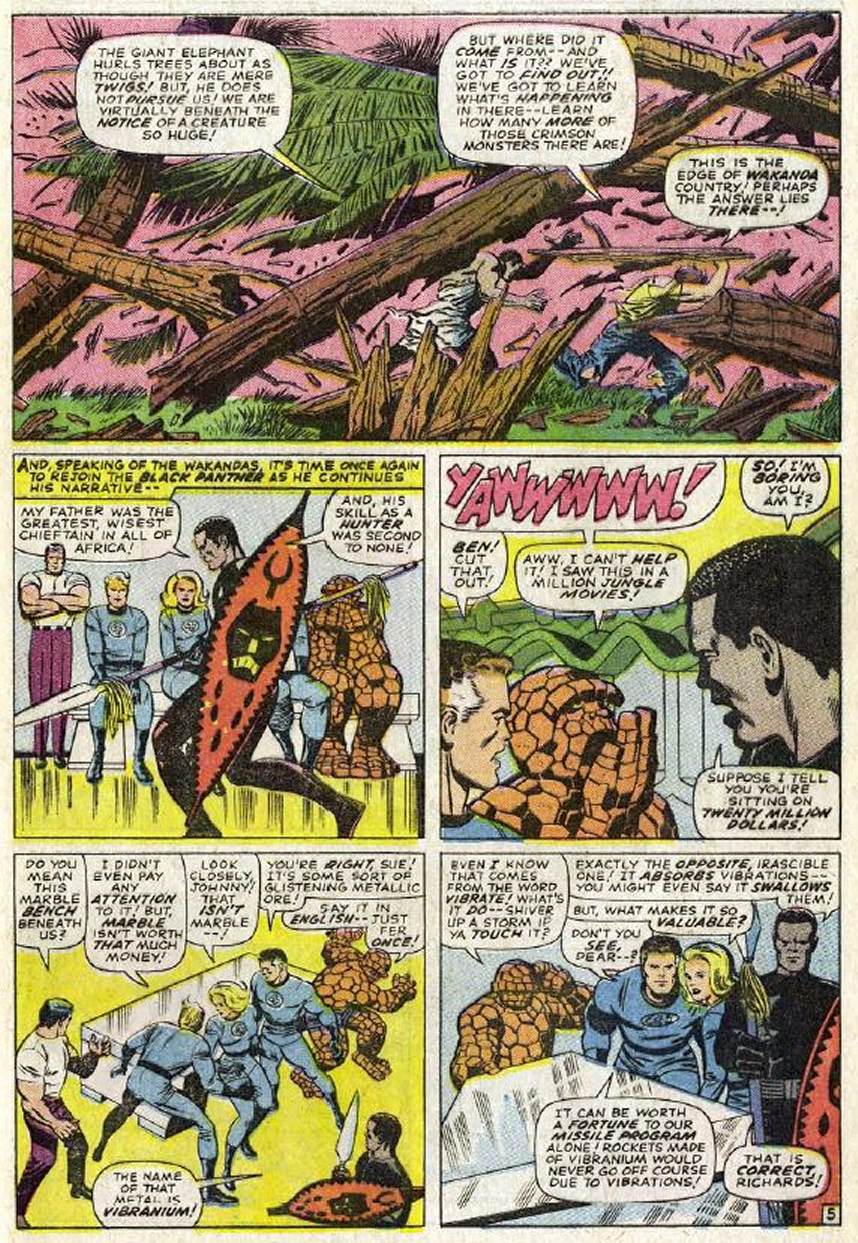 Ben comes off as such a rude guest here, but T’Challa is always the perfect host. When Ben starts acting like T’Challa’s tale of his father is a dime a dozen, T’Challa unveils a surprise: Vibranium!

The entire time the group has been sitting on a bench made of solid vibranium. In the Marvel universe, vibranium is a metal that absorbs any vibration. Captain America’s shield is made from it and it’s what gives it the ability to absorb things like Thor’s hammer strike. An entire bench of that stuff could make a suit of armor that would have the same properties. Or could be used to do a million other things that might aid nations in coming up with new methods of generating power or destructive capability, as Reed so rightly notices.

And one bench isn’t all Wakanda has. No, they have AN ENTIRE MOUNTAIN OF THE STUFF. That part boggles the mind. It’s like having a village sitting next to some time of super-concentrated crude oil or supremely rare diamond. 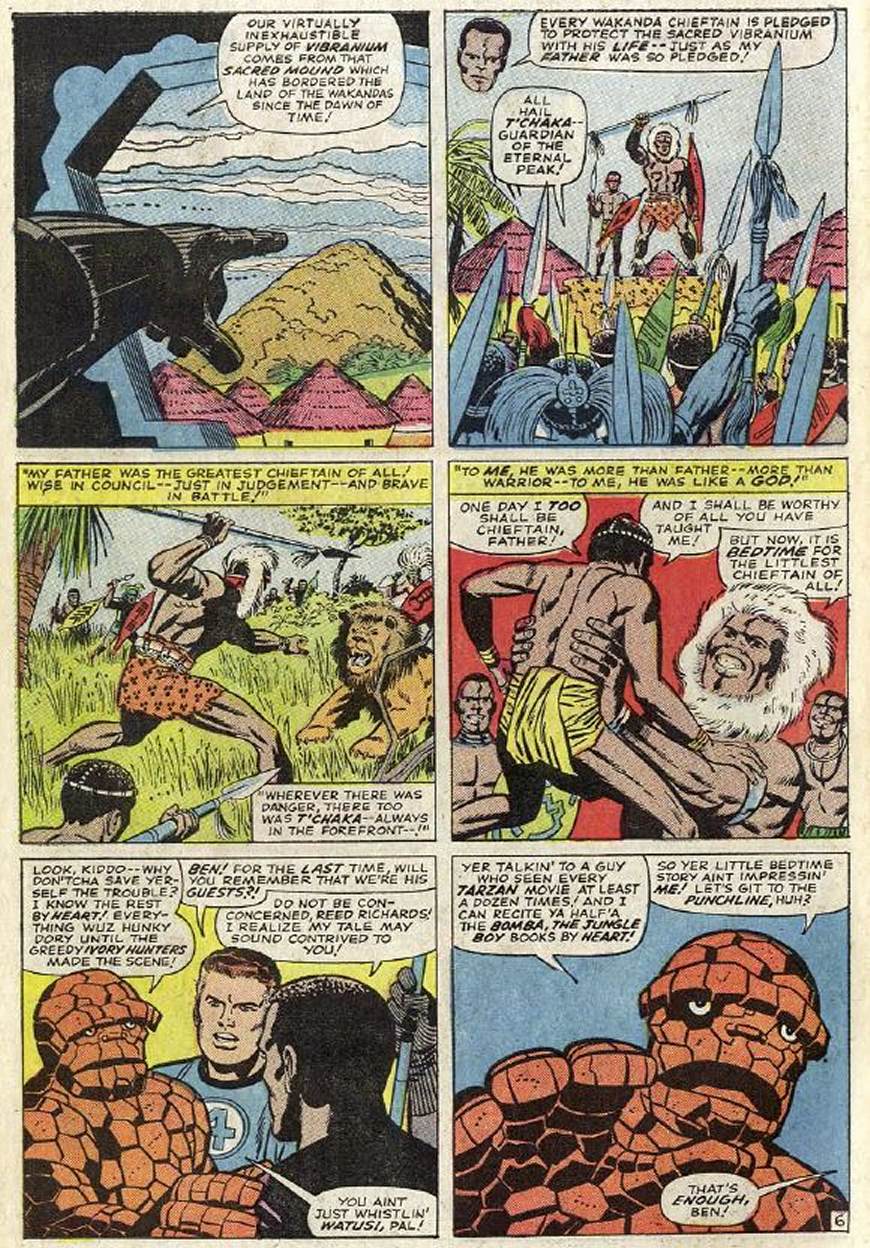 …and Ben again acts all superior. I did not know that rocks could get butt-hurt. I DO think this is a hold over from T’Challa besting him. Ben’s always surly, but typically not in your face mouthy. It’s sad and offputting to see a character I genuinely like be so rude to others.

T’Challa is still the perfect host and fast forwards his tale to the moment of his father’s downfall…the moment Klaw, the Master of Sound makes his appearance in Wakanda, demanding the vibranium mound. T’Chaka defies him and is viciously gunned down for standing up to the evil, power mad scientist and his mercenaries. 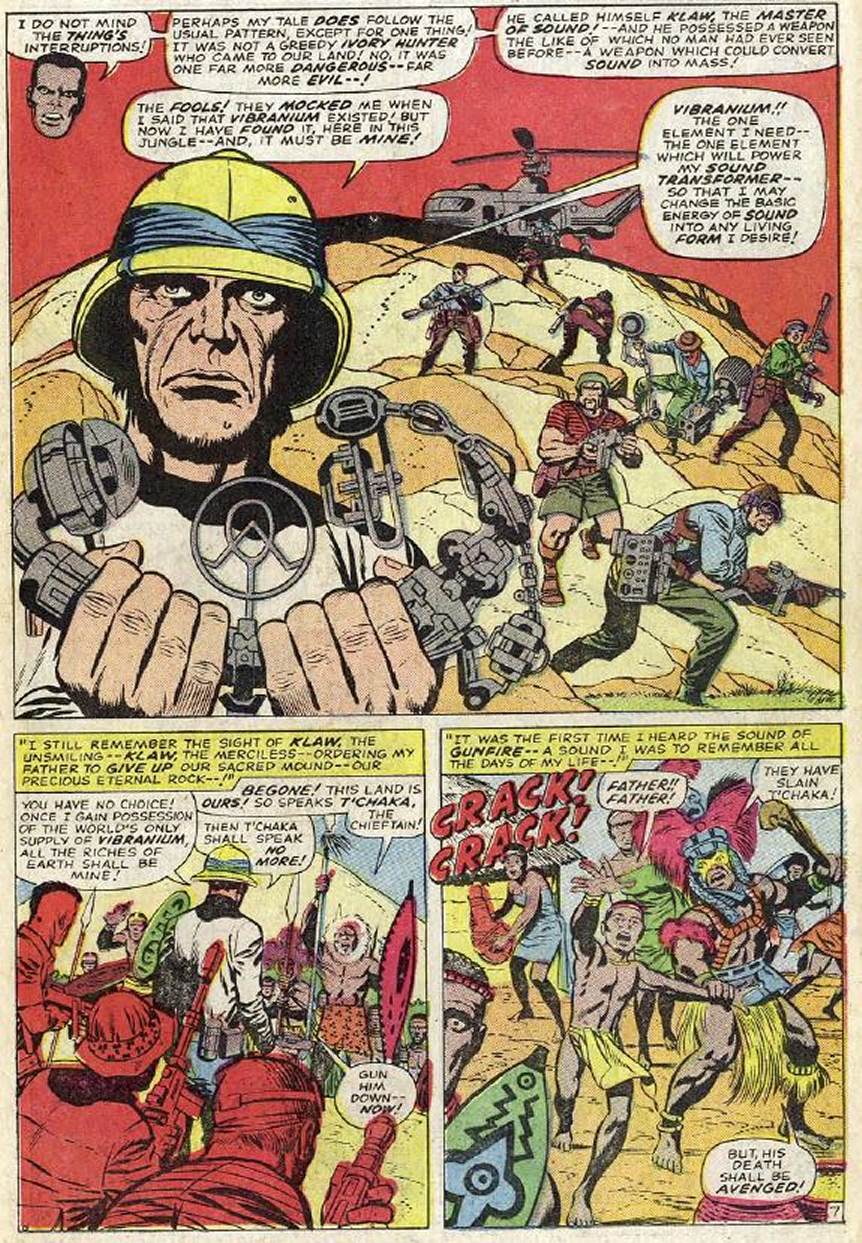 The villagers are being picked off by Klaw’s superior weaponry as T’Challa comes across his father’s corpse sprawled with his warriors and it is at this moment that T’Challa take son the mantel of the Black Panther. In making his way toward Klaw’s men, he comes across a mercenary carrying a large weapon of unknown design. 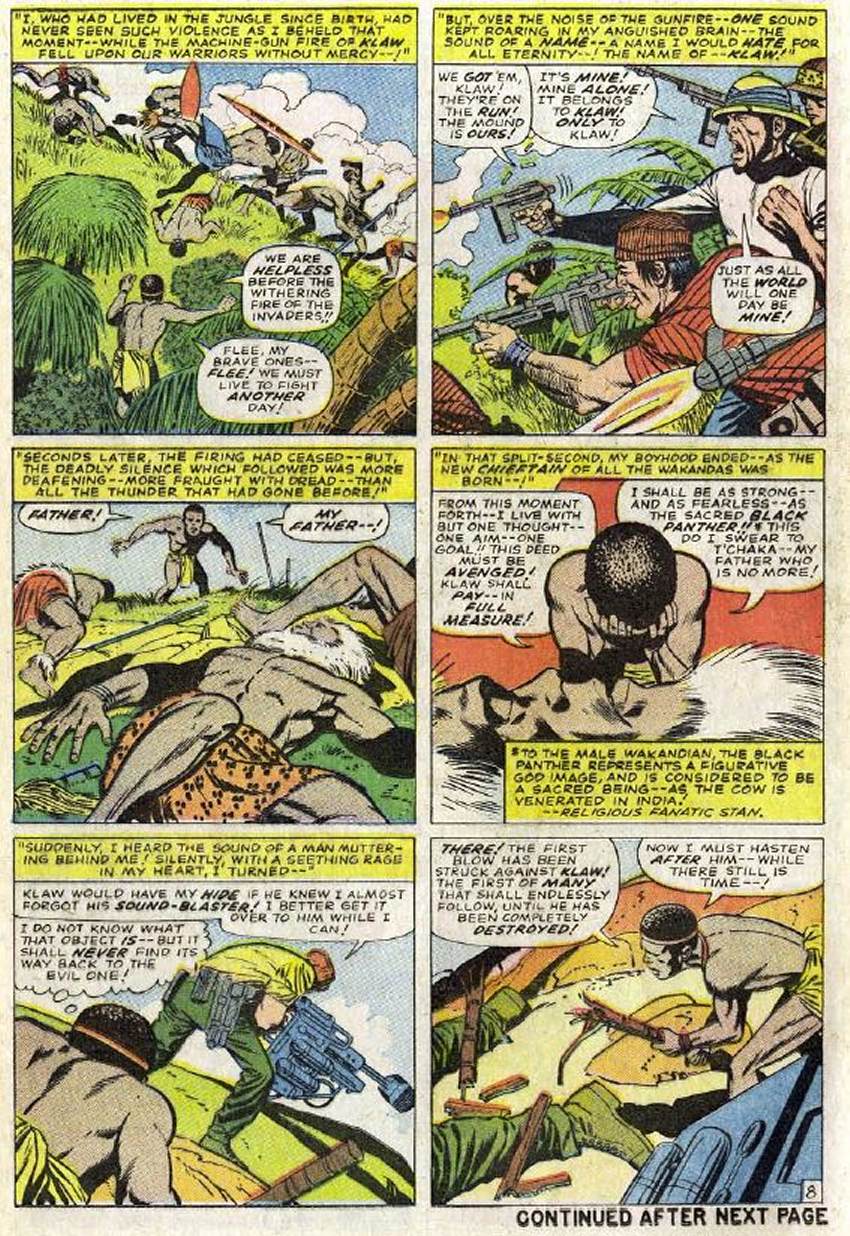 Knocking the guy out is easy and now T’Challa has the instrument of his revenge. He follows the trial back to his village, which Klaw is razing. As his people flee, T’Challa utters a cry of vengeance and the blasts Klaw’s forces. Upon blasting them a second time he destroys Klaw’s right arm and hand with the force of the sound beams coming from the strange device. 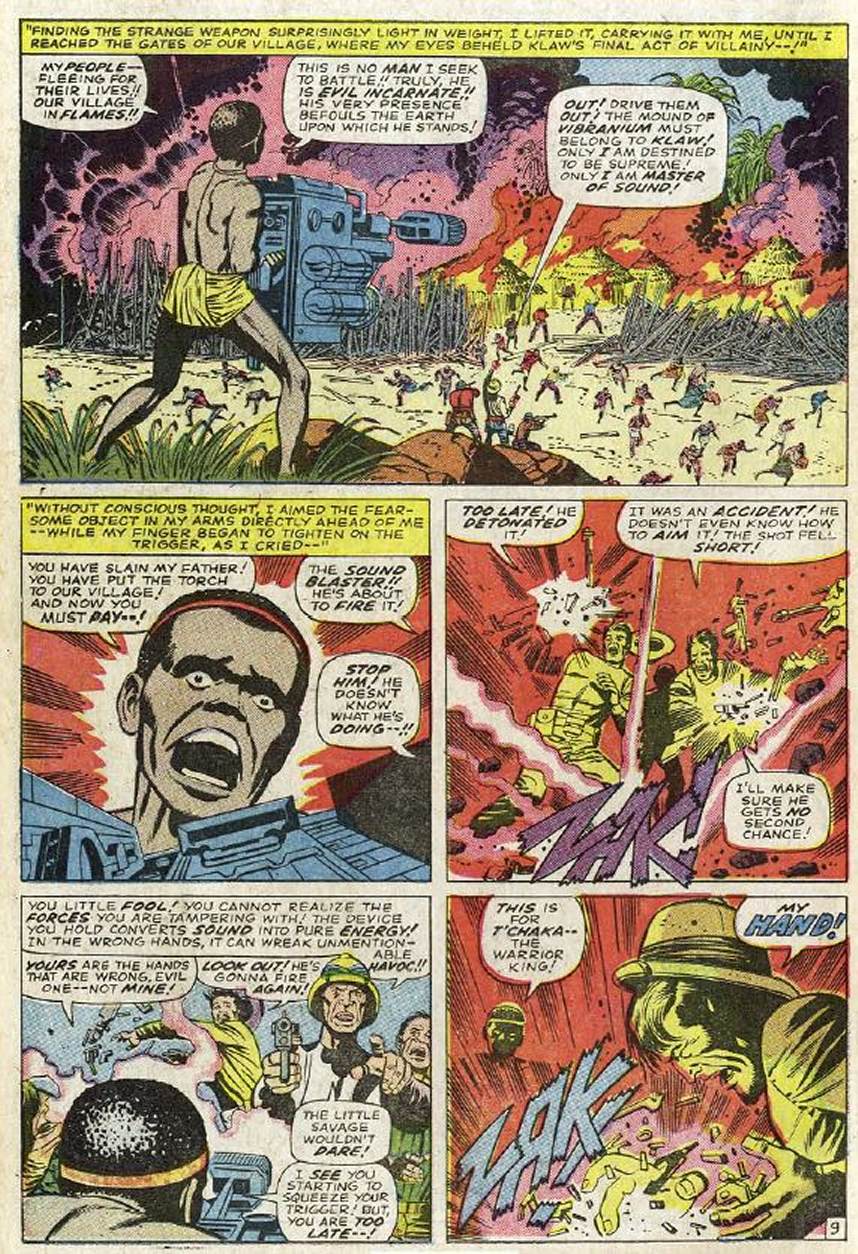 Gravely injured, Klaw is forced to retreat. T’Challa ends his tale with how he became leader of his tribe, sold off small amounts of the vibranium to become rich, attended the world’s best universities to become well educated and brought all this back to his people to make Wakanda an unrivaled nation on the African continent. As for those Panther powers, those are a secret upon which the Panther keeps mum about. 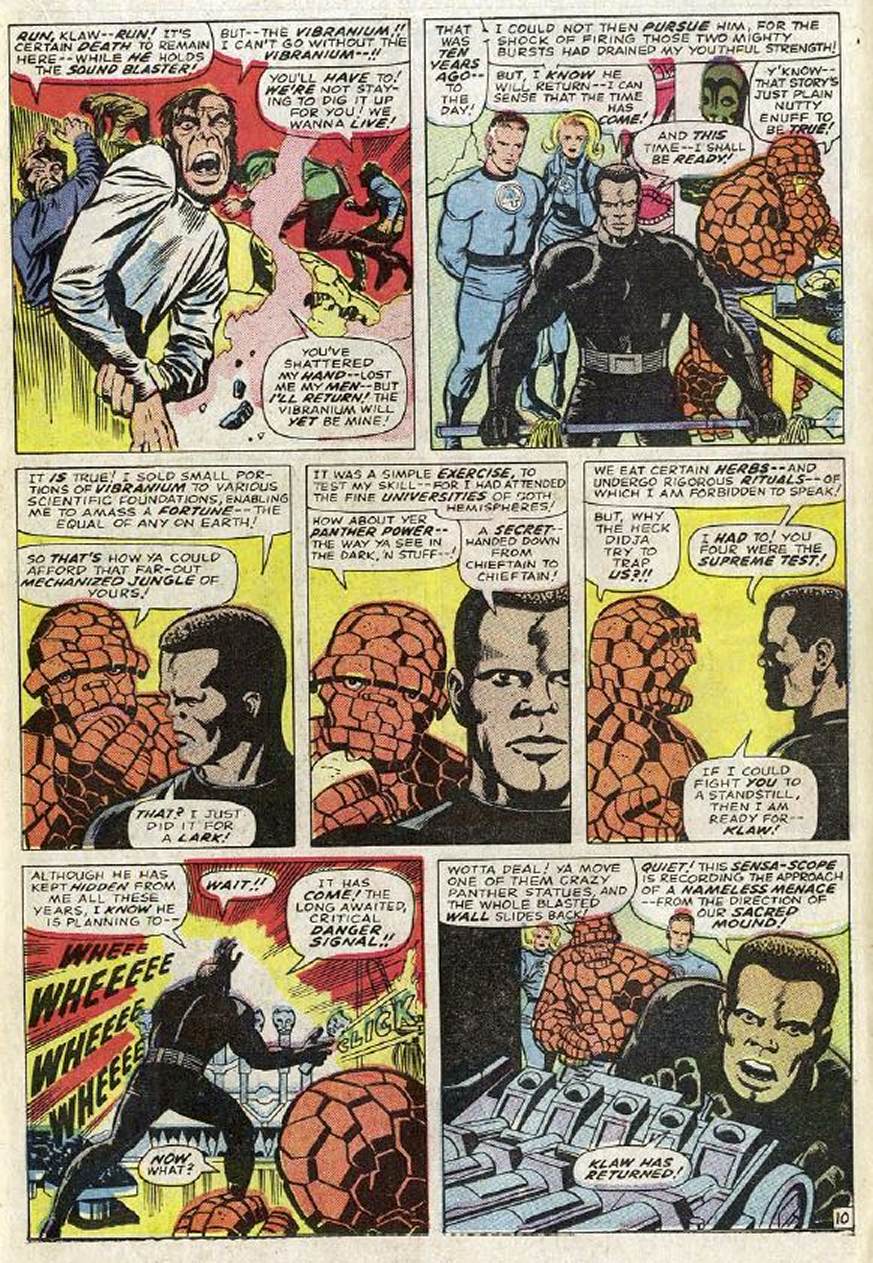 And here we get to the conflict in this issue, as the Panther reveals that he believes Klaw has returned and only by testing himself against the Fantastic Four could he know that he was worthy to face down the man who murdered his father.

With the alarm from that machine we are off to the races, the FF working to take down Klaw’s sound creatures while the Black Panther takes on the evil genius himself. 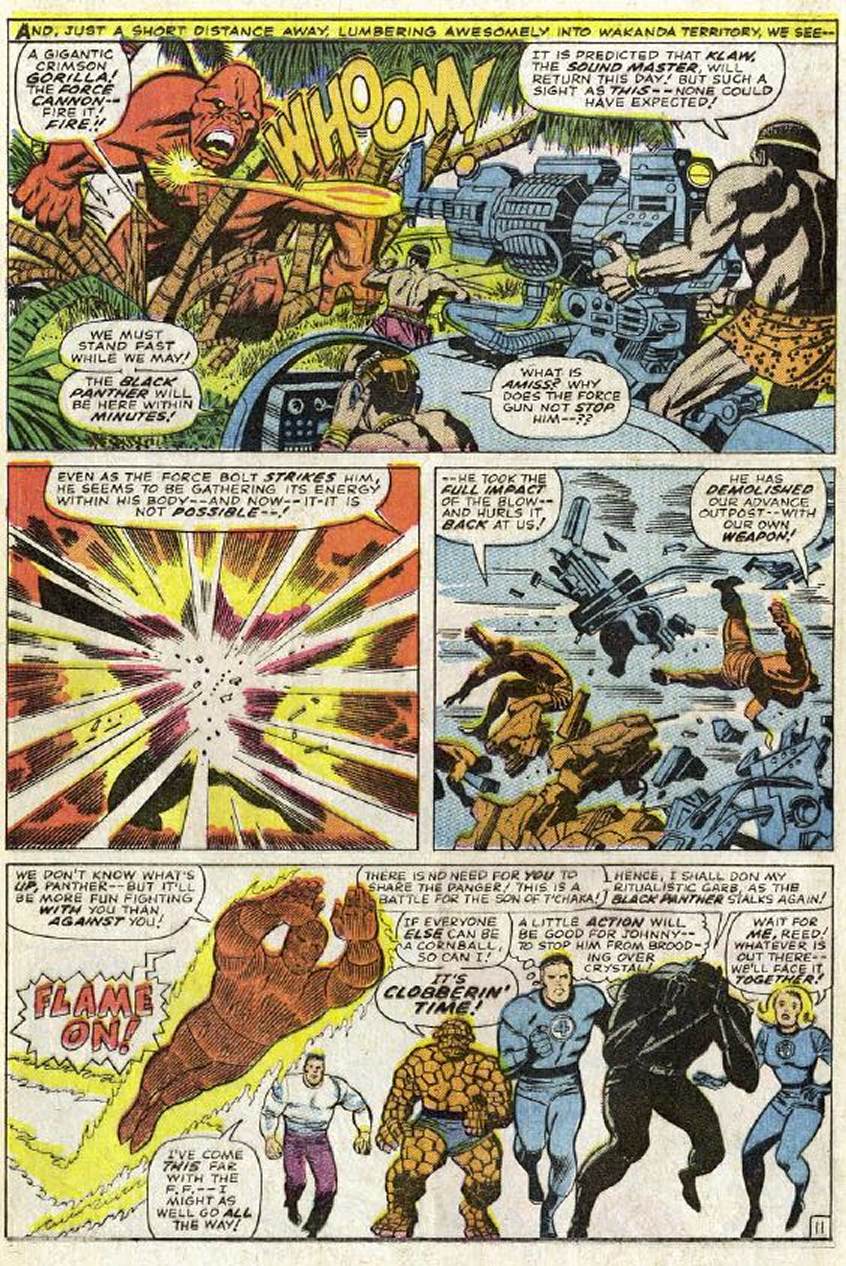 First Johnny tries his “hand” at burning the sound ape, but all that does is reflect the heat back at him. Thing comes to his rescue… 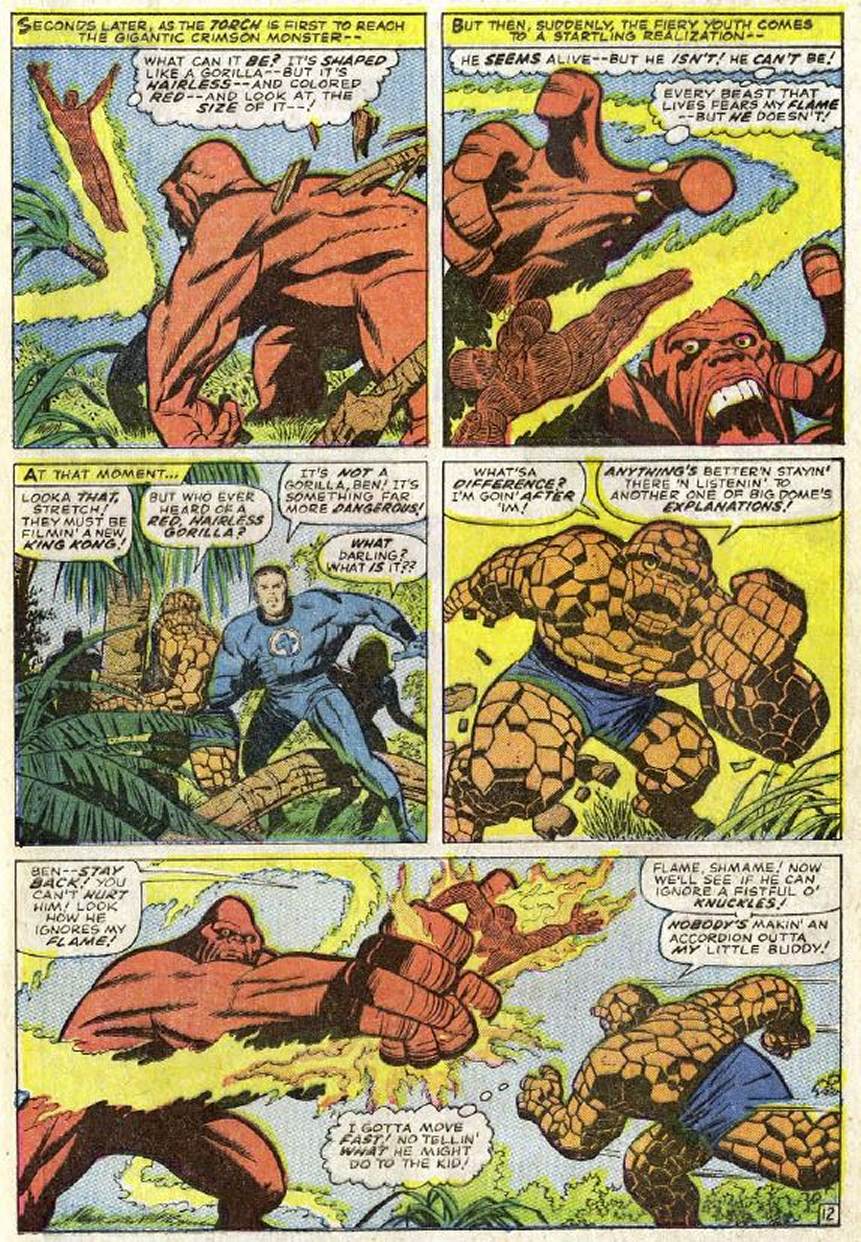 …but reflects the force of the blow back at them in the form of a tremendous sonic boom.

Ben is still miffed over the drubbing he’s gotten for two issues now and while Wyatt and the rest of the FF take a defensive posture of getting out of the way and planning something other than a direct attack on the “red menace,” Ben decides to double-down on the smack the thing in the face with force argument. He lifts up a boulder and heads off, while the Black Panther takes to the trees like his namesake, heading for Klaw’s hideout. 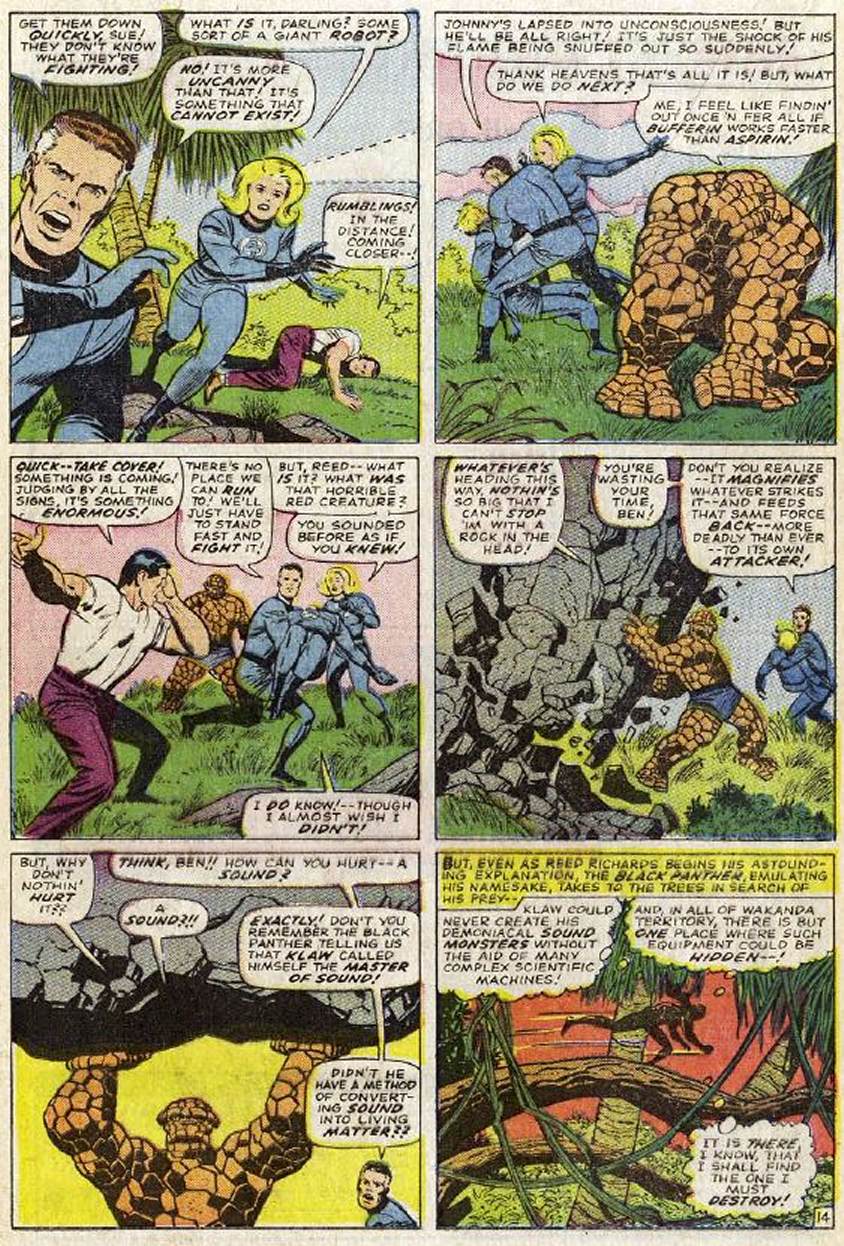 Once there he knocks out the guards and confronts the man who killed his father, who now sports an incredible weapon instead of a right hand. 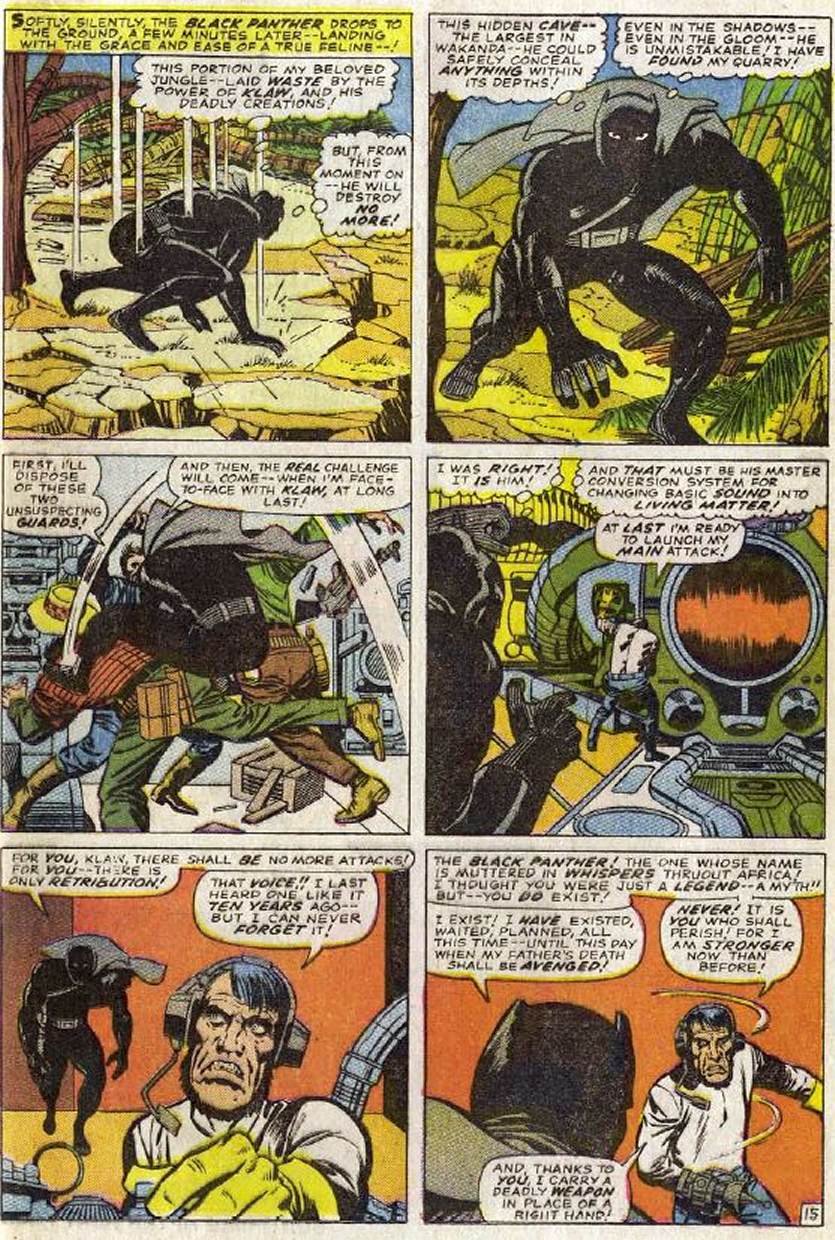 Klaw taunts at destroying Panther with a quick shot from his gauntlet, but instead sends a sound-created red panther after him. The thing looks to be pretty ferocious, so T’Challa might end up a “Black-and-Blue Panther” by the time it’s done with him. 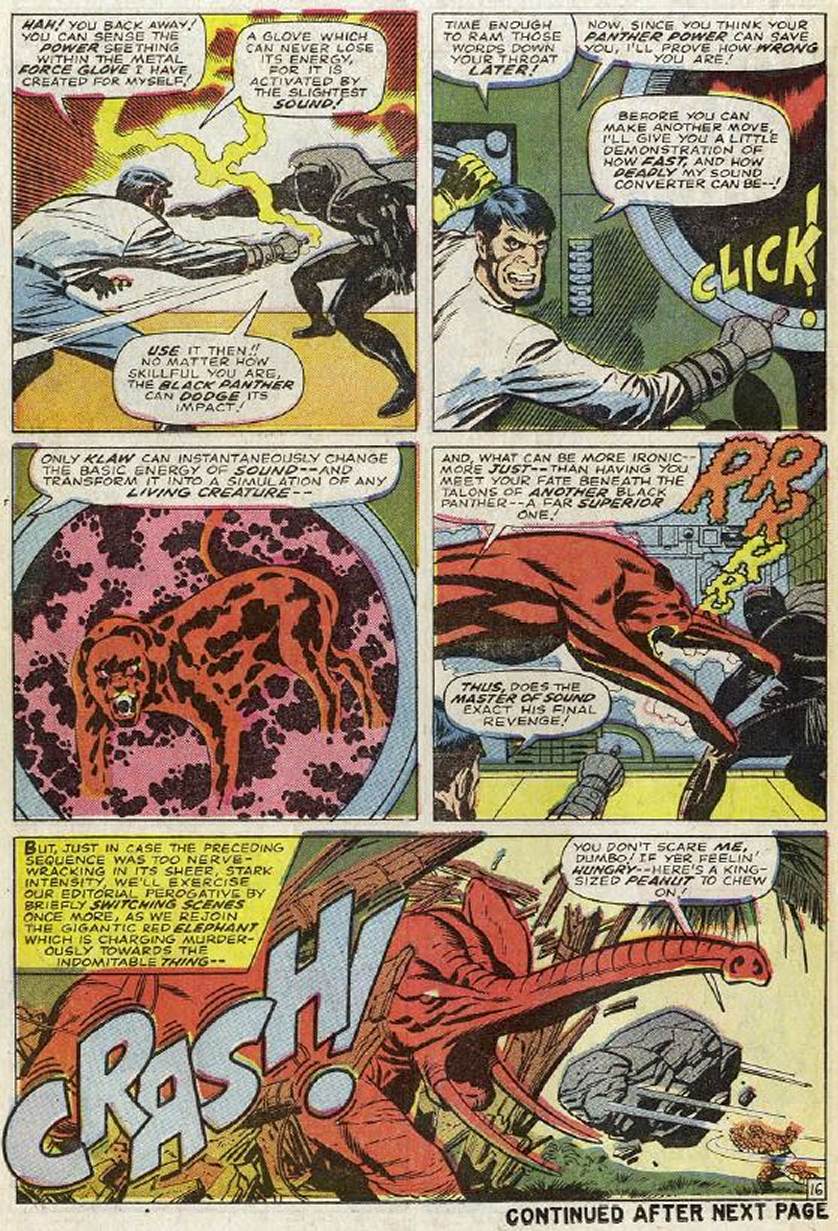 Ben, meanwhile chunks a rock at the sound elephant, with the predictable result of it bashing the rock right back into him. Not one to give up a fight…like, ever…Ben grabs a hold of the sound-a-phant and lifts it off the ground, taking damage all the while. This IS the guy that goes toe-to-toe with the Hulk every year or so. 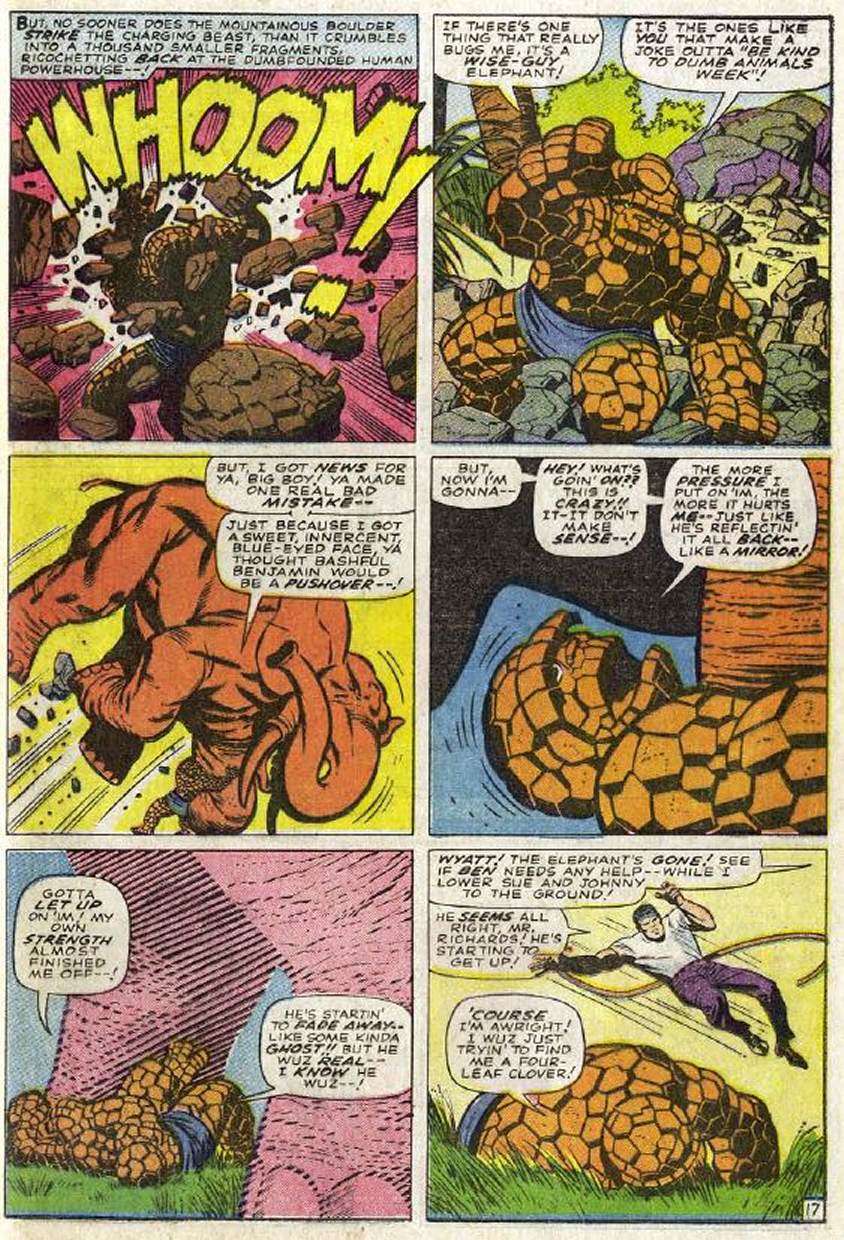 The construct fades just as Ben’s strength flags and Wyatt swings in to check on his rocky pal.

With the FF back together, they finally realize the Panther has made off while they were tussling with the sound creatues… 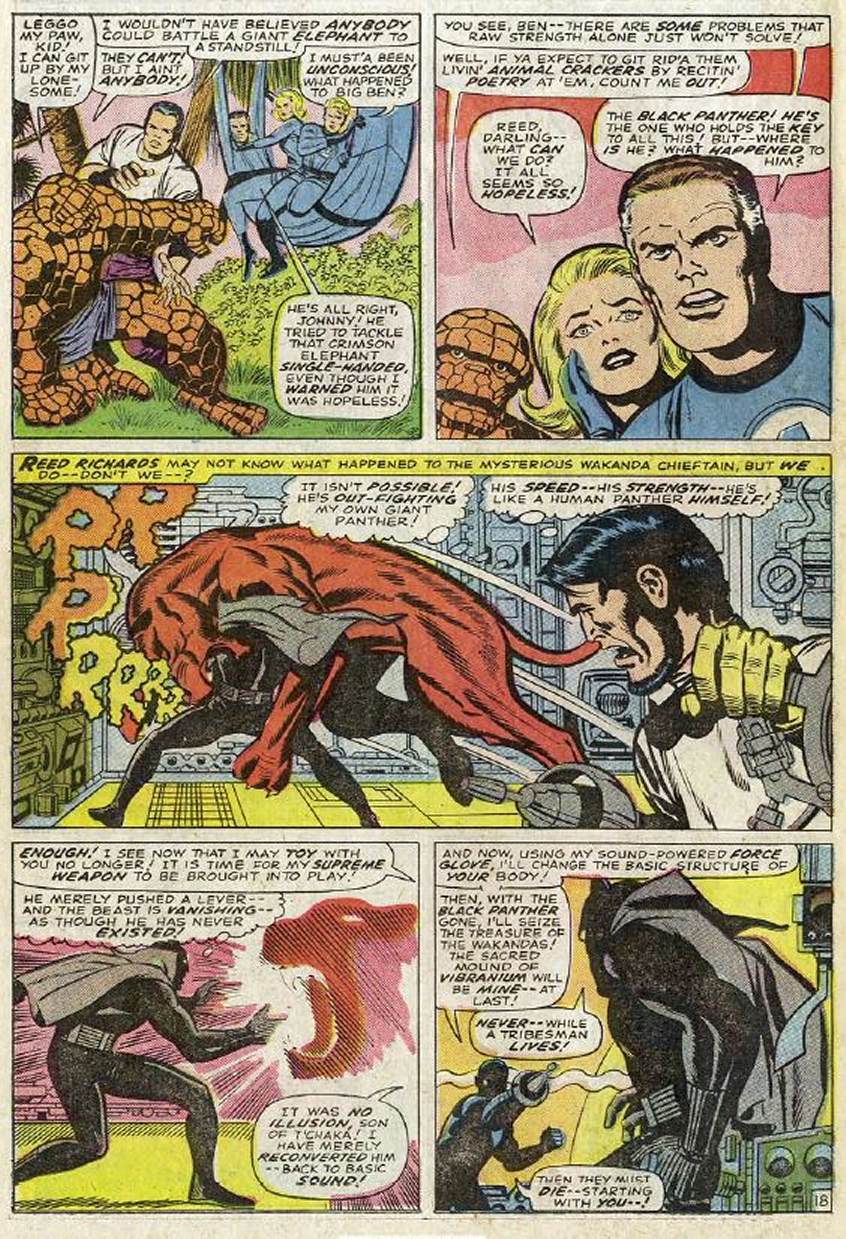 T’Challa, has his hands full at the moment, wrestling the sound panther to a standstill. In a display of great strength and wisdom, our favorite African king out lasts the sound beast, the resultant battle not phasing T’Challa near the amount it did Ben. This proves the Black Panther isn’t just a battler, but someone who employs strategy to defeat his enemies.

Unfortunately, it looks like Klaw has finally decided to just take T’Challa out instead of messing around. But T’Challa has a surprise in store for our villain… 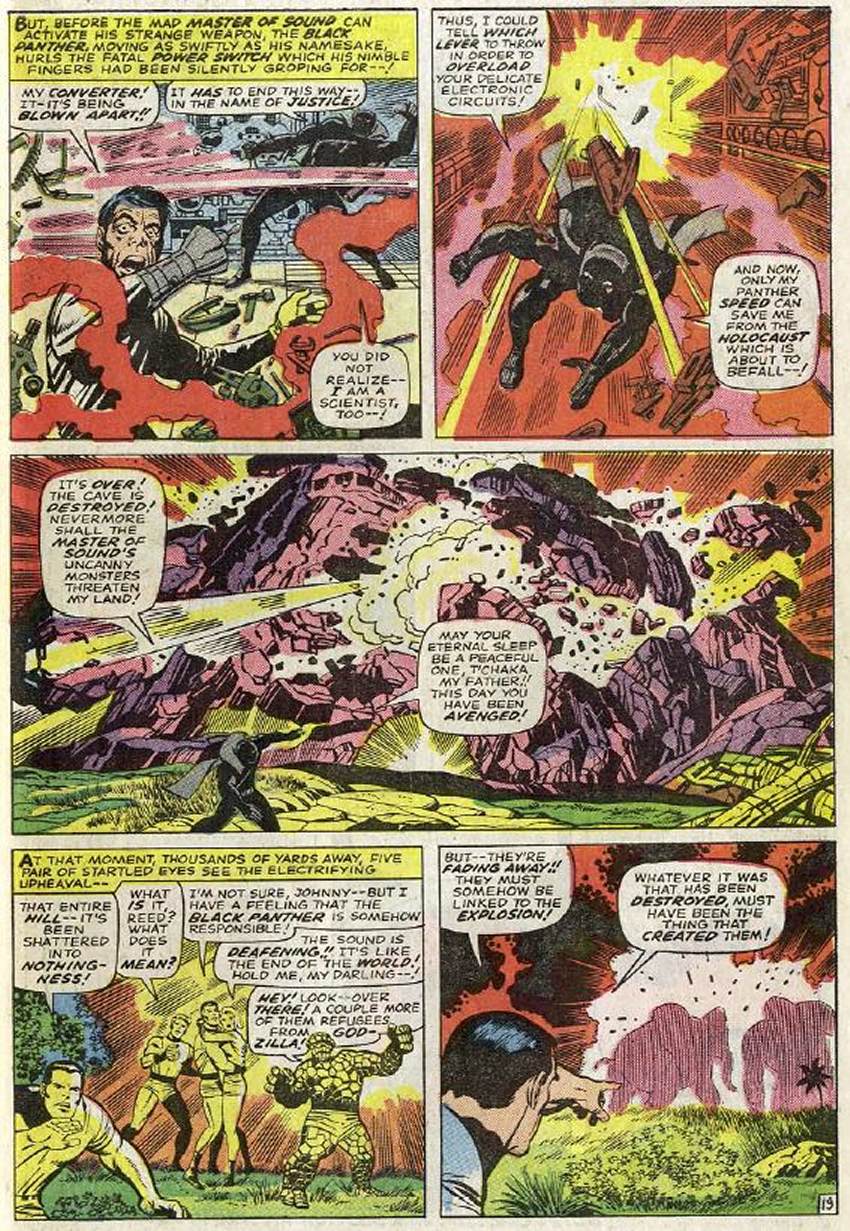 With a swift action, T’Challa flips the switch that will cause an overload in Klaw’s sound system, a sort of Mega-Bass is what’ I’m envisioning this to be, and the entire complex boom-boxes itself to pieces. Panther escapes and the constructs the FF are fighting vanish without a trace.

T’Challa thinks his days as Black Panther can now be put behind him, but Reed tells him that they could use his help in the fight against evil. After a moment of thought, T’Challa agrees, pledging “my fortune, my powers, my very life to the service of all mankind.” Pretty cool and the FF gets a new supporting cast member for a time. 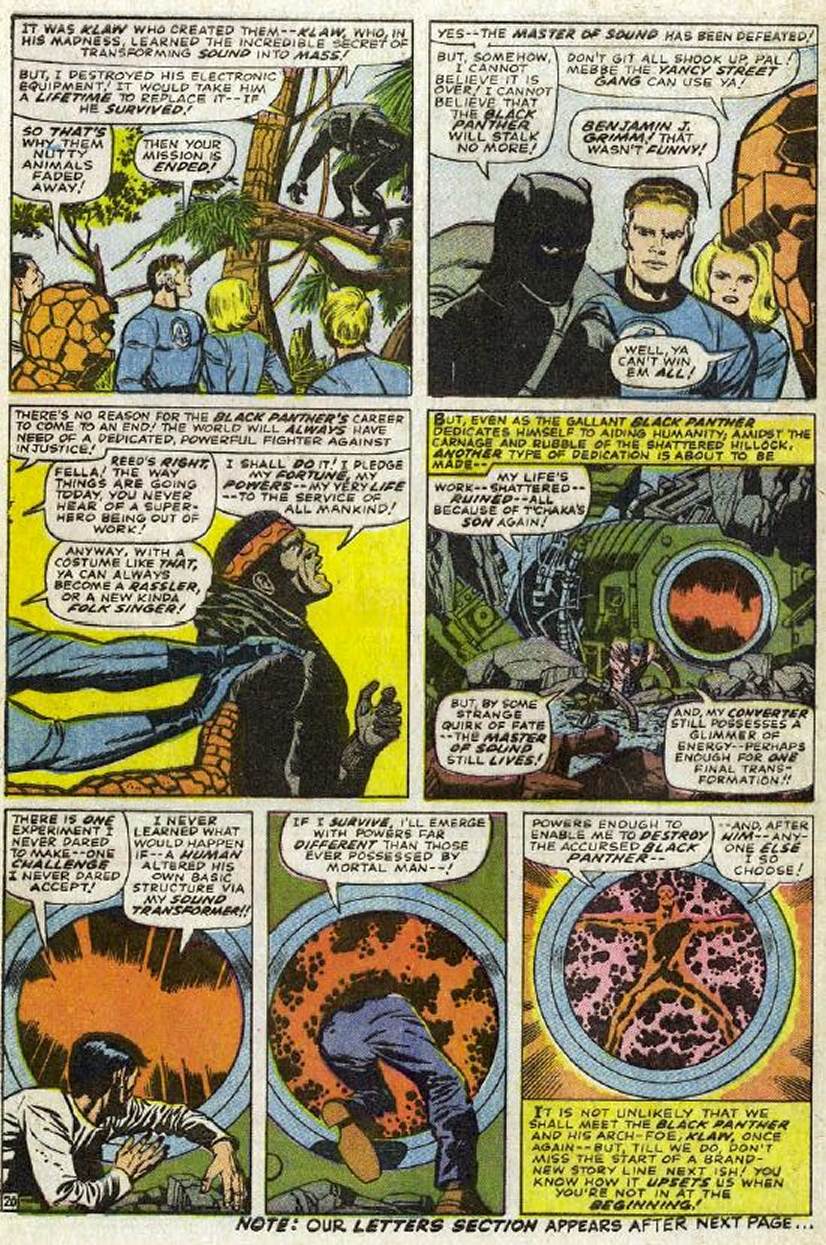 As for Klaw? Well he decides to upgrade himself by jumping in his own sound reactor. The results of which wouldn’t be shown until Fantastic Four #56.

With that, we’ll take our leave of the 60’s era Black Panther and move on to some more recent, albeit not as popular, appearances of T’Challa. More on him next blog post!
Posted by SonOfCthulhu at 5:41 AM