Some random Spider-Man books, Part 14
Is Spider-Man only as good as the costume he wears? 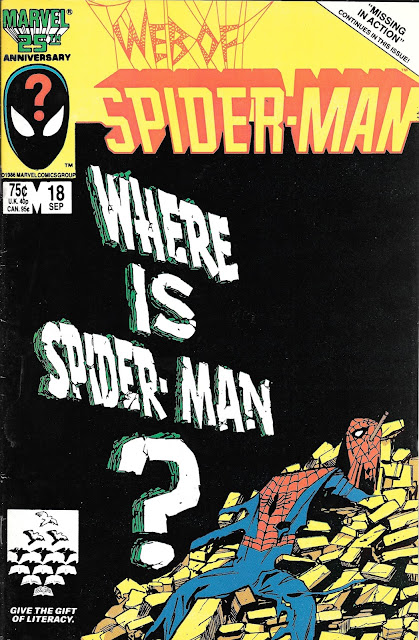 Both the movie and this issue state a resounding “NO!”

For the next two issues, we are going to look at two very non-traditional art teams who got to work on Spider-Man titles. There have been many more, I’m sure, but these two ended up in the Crapbox and something tells me they are here precisely because the art just wasn’t someone’s cup of tea. My Half-Price Book finds tend to be exactly that.

We begin with Web of Spider-Man number 18 and a story that took Spider-Man out of Long Island proper and also out of the Spidey suit. The pictures herein are an astonishing amalgamation of two VERY different styles that, for me at least, come together very nicely.

Pencils are done by Marc Silvestri, the current CEO of Top Cow Productions. Many of us know Silvestri from his long runs on Uncanny X-men and Wolverine. In those books he exhibited a sharp-edged style that I wasn’t overly fond of, but grew to appreciate. Something about his characters always felt “angry” to me even when they were just standing still. 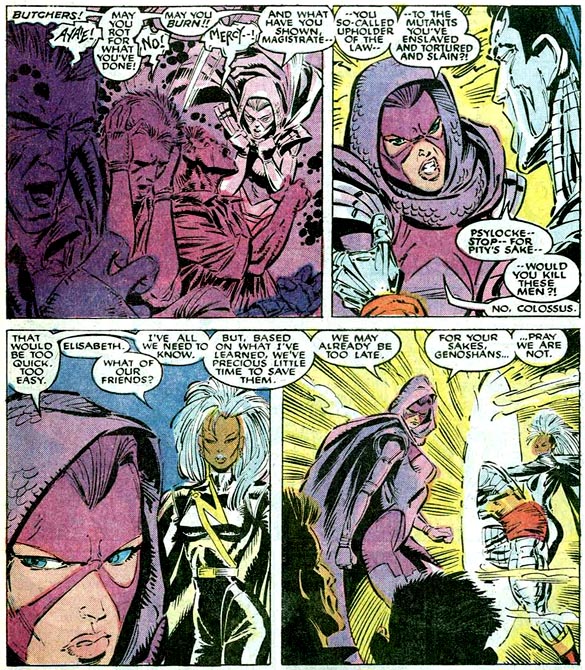 Silvestri left Marvel in the great exodus of 1992, being one of the original seven to found Image Comics over profit sharing and duplication rights on the art they had provided Marvel. For his part of Image, Silvestri created Cyberforce (you’ll see lots of them later), Darkness (so much Darkness in the Crapbox), Witchblade (Yup!), and Codename: Stryke Force (them too) titles. The key thing I want you to remember about Silvestri is his angled, detailed-filled line style. Here’s couple more to get it set in your noggin. 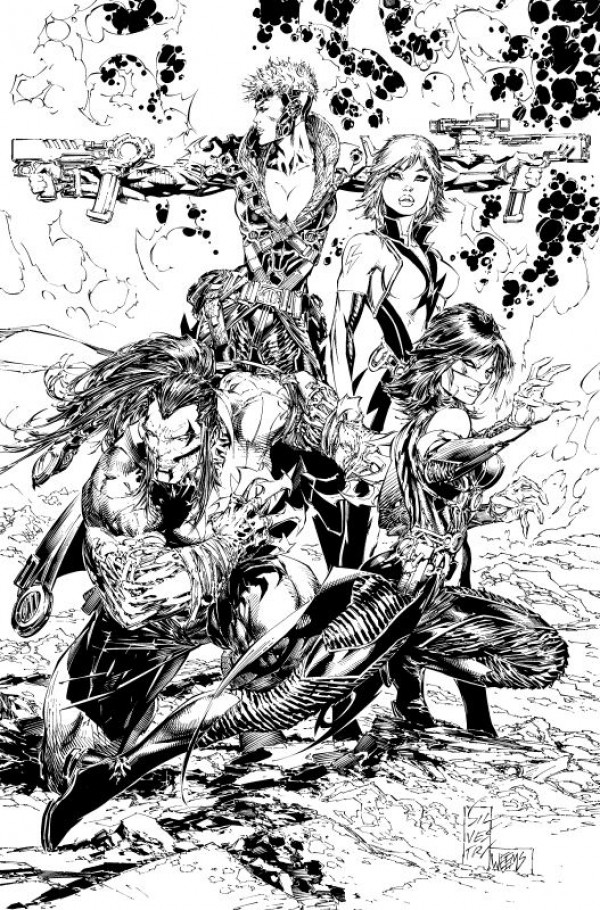 Now these may be “later Silvestri” as artists tend to refine their styles as they age, much like a good wine, but what I want you to see is how this looked inked by someone following Silvestri’s underlying pencils closely… 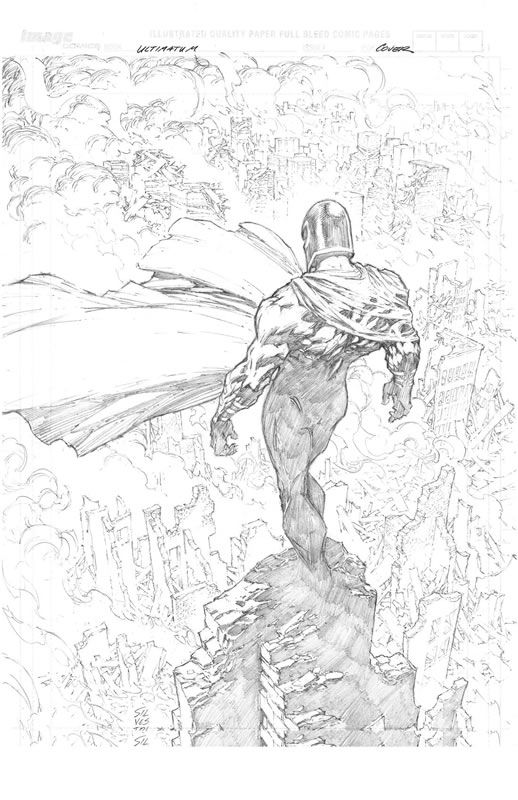 He’s good, I have to give him that. His early style didn’t rock my boat but his later stuff really did.

This issue was inked by a personal favorite Kyle Baker. Baker is both a writer and an artist and he’s got both Eisner and Harvey awards to prove he’s got the stuff. His style is far from traditional, however. 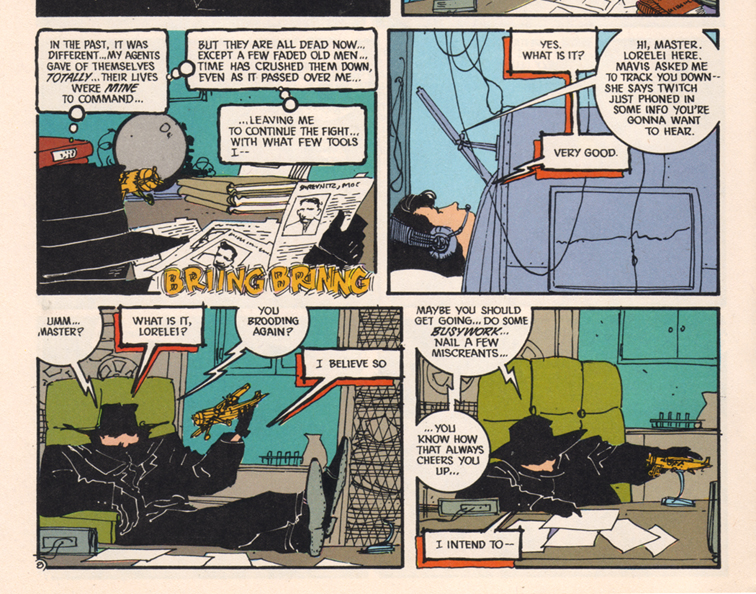 I encountered Baker through DC’s short lived (and by me, much beloved) update of The Shadow. Baker took over from Bill Sienkiewicz after he ended his run in issue #7 of that title. Following Sienkiewicz’s passionate representational imagery would be difficult for nearly anyone, but Baker…Baker’s run through the series end in issue 19 was somehow better than his predecessor. 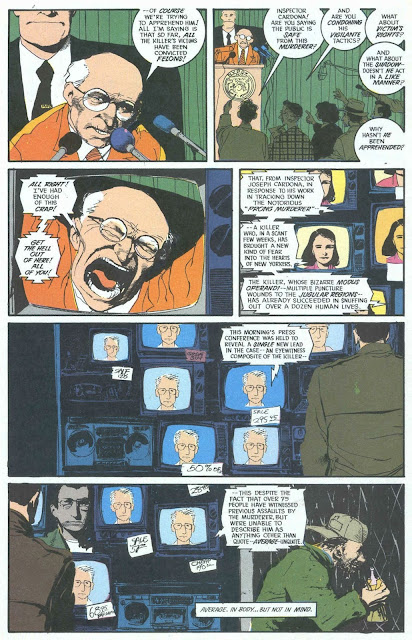 His way of drawing bodies to me always looks like he’s trying to not lift his pen from the page. They have this odd, primitive etch-a-sketch styling that is almost like shorthand. Thick stick-figures, might be another way to describe them. The same things, only less with his backgrounds. It’s all child art representationalism. But then you get to the faces… 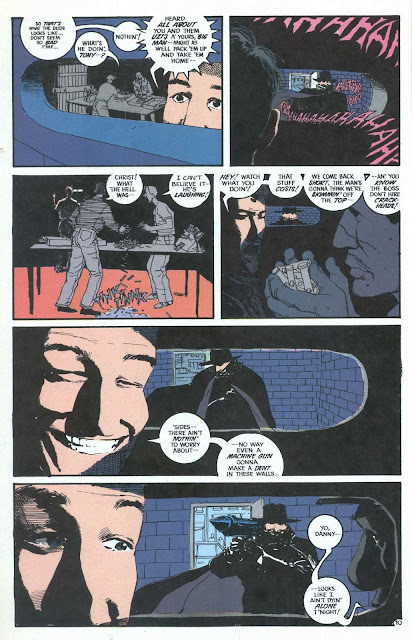 Baker draws faces like his hand can take a photograph of an emotion. And when you meld all of these elements together the result blows my mind. I KNOW it isn’t for everyone, but it amazes me how quickly it conveys a truth about storytelling. Details of a room aren’t important, actions are only there to convey the plot, but the core of what makes us want to read and believe in these fantastic worlds are the emotional states of the characters that inhabit these scenes. And how better to know that than to see it written across their faces?

I understand that this isn’t for everyone, but I GET his art. It speaks to a part of me that understands his motivation for the elements he uses and why things are rendered the way they are and it tickles me in ways that seem so logical when the page might enrage someone else.

But here is the very best thing: this issue has these two men working together to craft a Spider-Man story. Silvestri’s pencils with all their detail don’t quite survive intact from Baker’s inking but Baker puts his spin on the facial expressions provided by Silvestri in a way that accents elements in a sublime way…What I’m saying here is this is issue is something DIFFERENT and that means it might take a few times through to really unpack it from a story and artwork perspective. Let’s get cracking, shall we?
We begin with MJ at Parker’s apartment worrying where her boyfriend has been off to for the past few days. She knows he’s Spider-Man, and that only makes the waiting harder. A knock at the door turns out to answer all these questions. 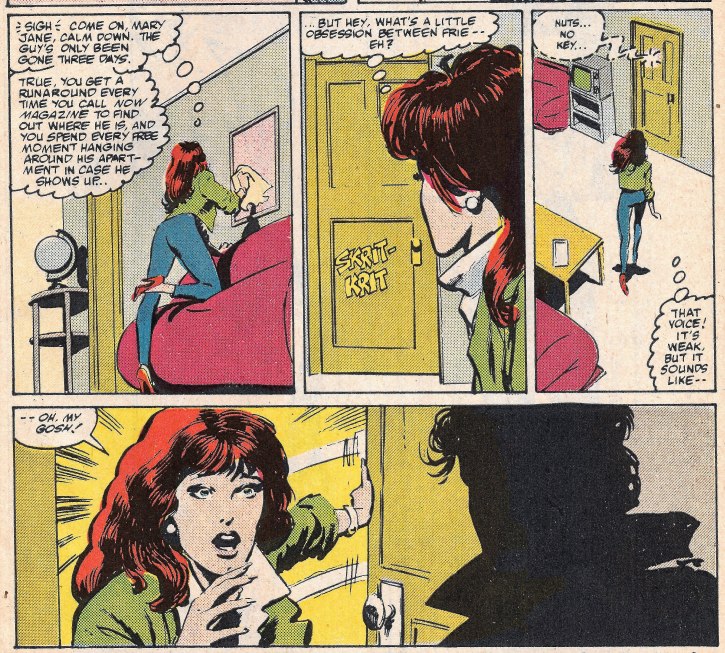 Note the backgrounds are a mix of detail and not detail. I’d love to see the raw pencils of these panels to know if elements in them got dropped out by Baker. It is also cool in that, while we still have the backgrounds done in a much more simplistic rendering, they are still much more detailed than Baker would usually provide.

And for the next page? Well, see for yourself… 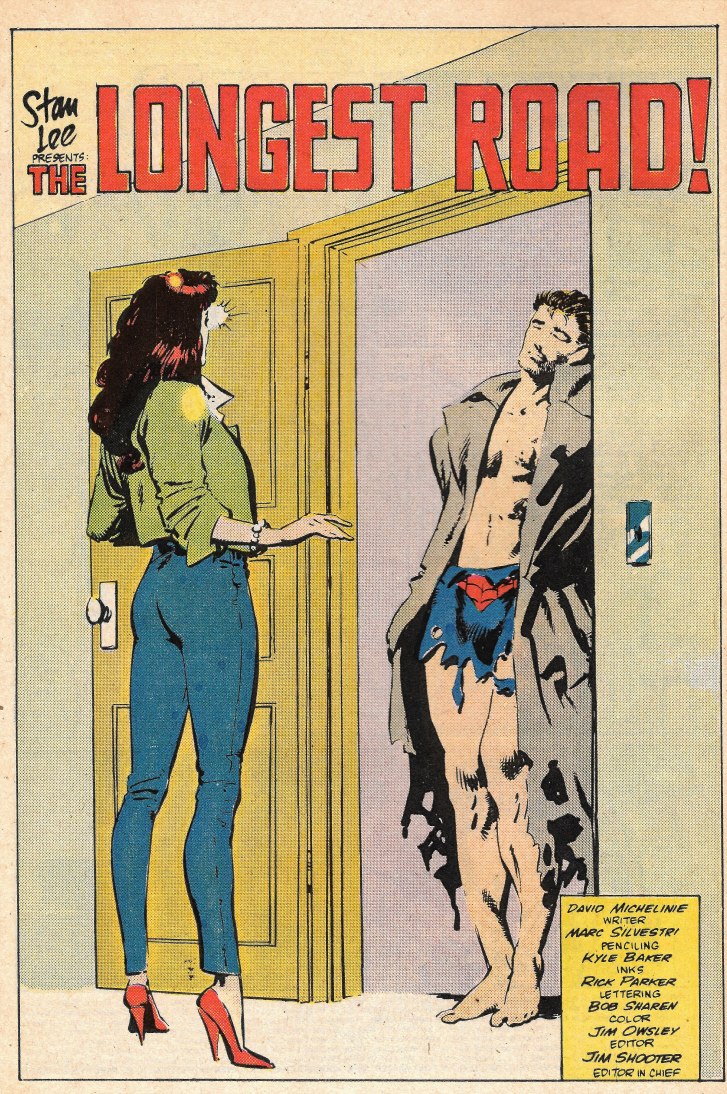 You feel that? The shock MJ gets as she opens the door conveyed by her stiff, upright posture. The strength in her stance as she is ready to be the support Peter needs. And Peter, slumped against the doorframe, half asleep. Every line conveying someone worn out, bushed-about to collapse. And all the other elements dropped out, gone because they would compete with the raw emotions of these two seeing each other.

Hang on kids, you’re in for one hellava ride!

And let’s start this rollercoaster up that first hill. Peter allows MJ to help him in to the apartment and after a brief shower, begins his tale of woe and shredded costumes. 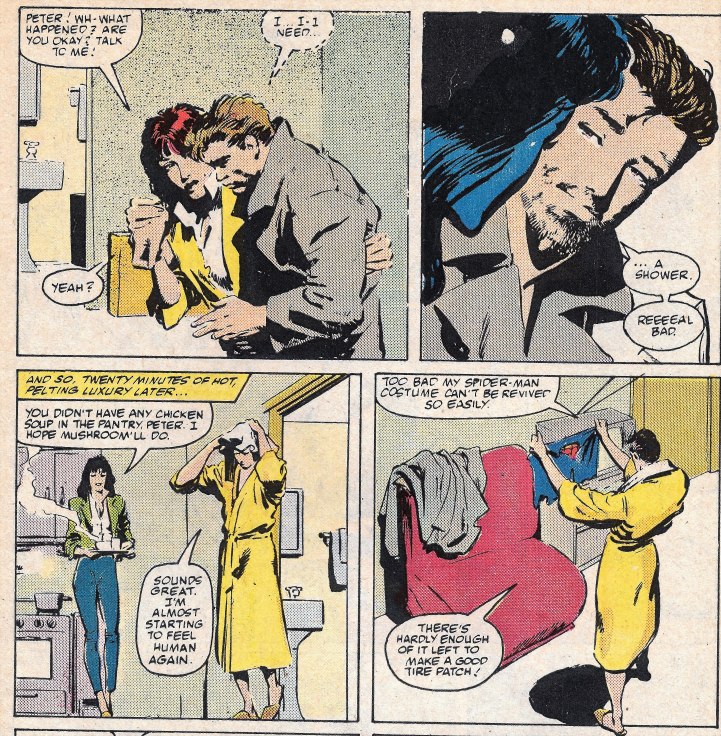 There is possibly someone out there in the audience that doesn’t dig this and that’s fine, art is subjective and I get that more than most, but to me…to me this is amazing. It feels like photos of what Parker and MJ would be like were they real. And I know it’s just scattered blobs of ink and color on a page, but there is something living between all those interplays of light and dark. I love it. 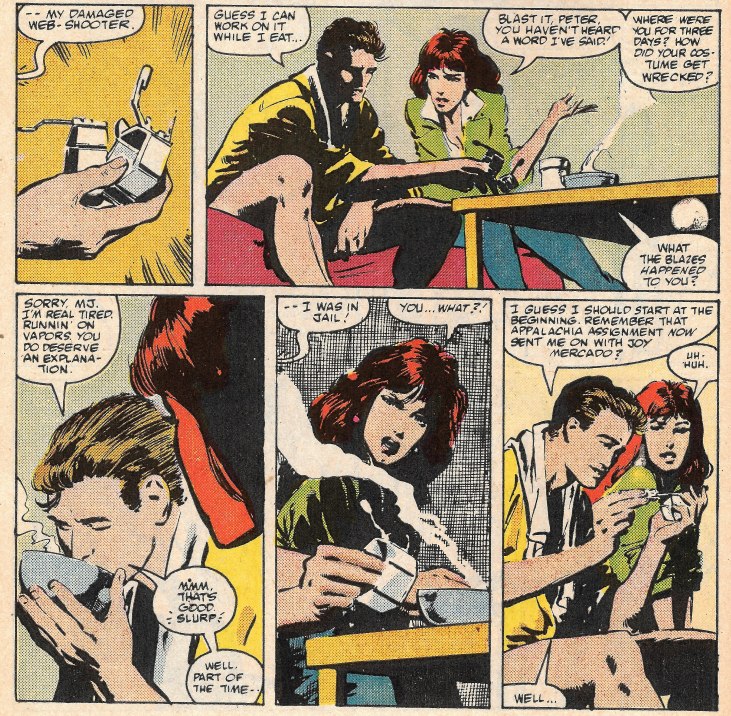 Maybe it’s the faces. I’ve always been a sucker for an artist that can captures a look like MJ is throwing in the bottom middle panel. Or someone who can display enjoyment like Peter clearly shows fixing his webshooter or the careful consideration he takes drinking his soup from the bowl. All of these faces tell the inner emotions so well, which is what we are here for. A show of the emotional drama of being a superhero. And speaking of that… 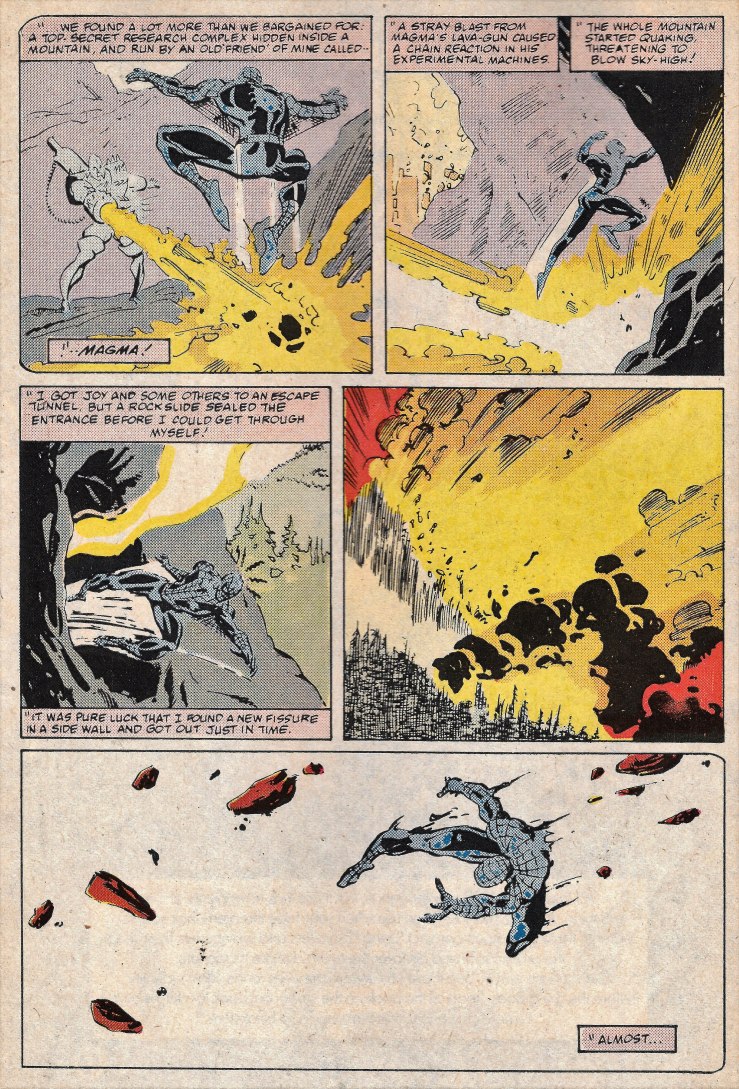 Spiderman gets blasted down to skivvies in the middle of a mountain range. And then what happens? 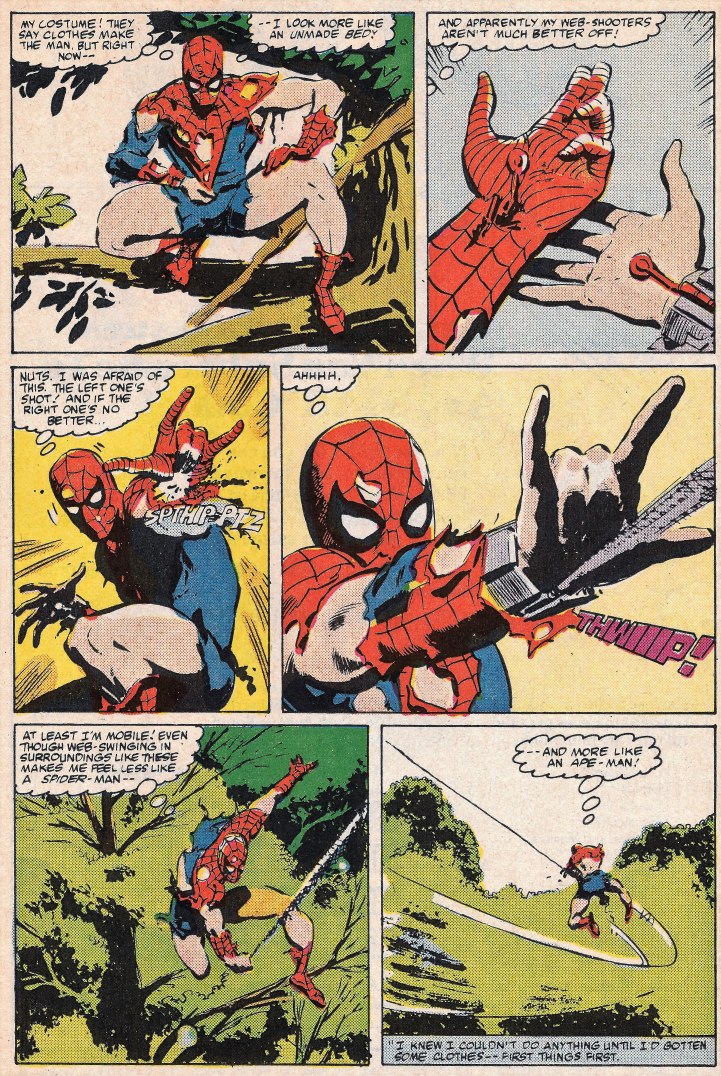 He’s left to Tarzan his way back to New York? Good luck with that. 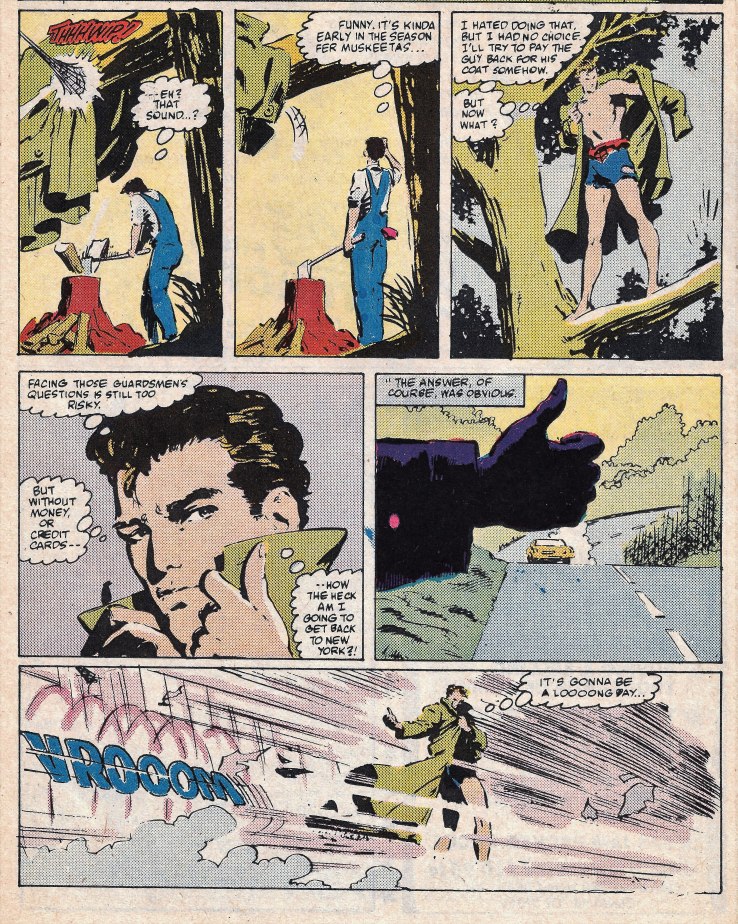 Parker steals this man’s coat and tries to hitchhike back, but that only gets him so far. By that I mean this far, exactly… 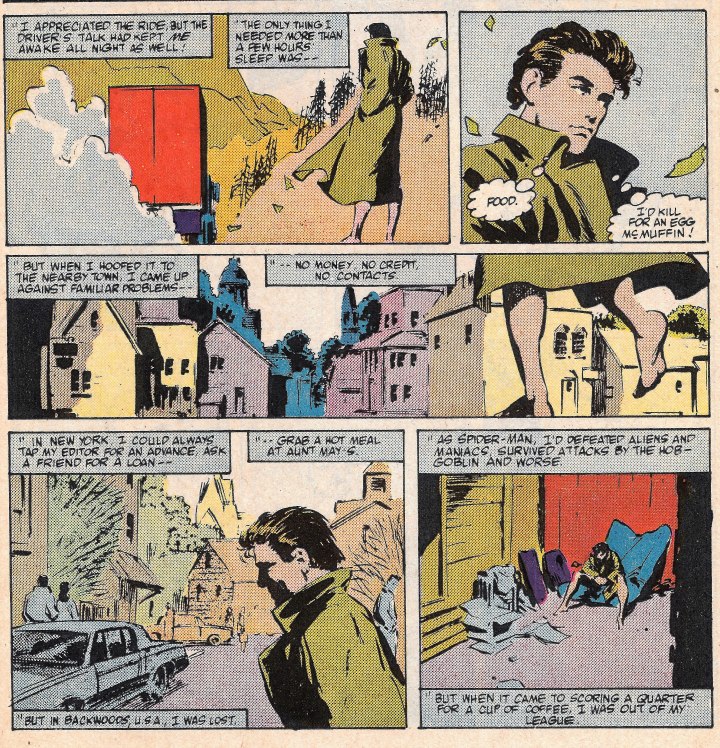 In a moment of desperation, Parker steals this woman’s pie. Never thought I’d be typing that sentence. Love Peter’s facial expressions and those errant hairs hanging over his forehead. 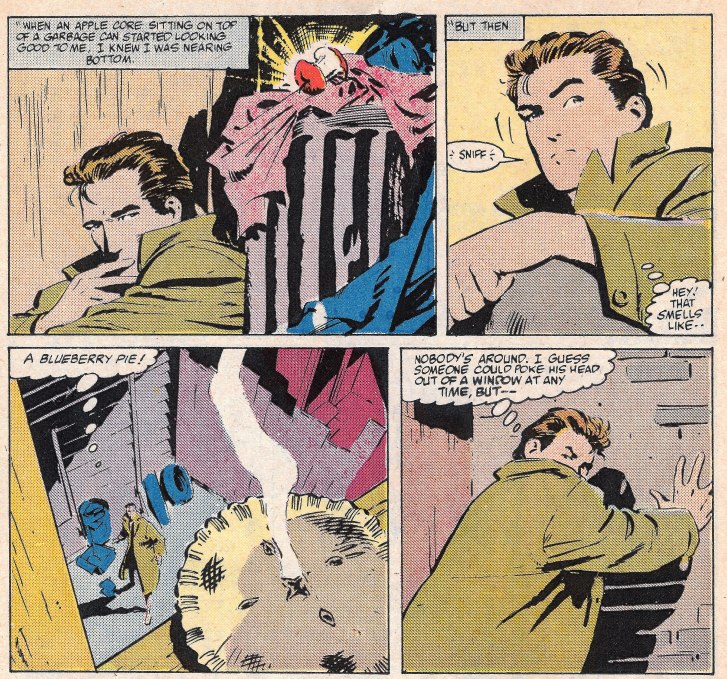 And unfortunately, Peter gets caught blueberry handed and this lady cop totes him off to the “hoosegow.” While being booked, one of the officers seems to take an interest in Peter for his “work program,” Something that ends up being just as sinister as it sounds. Pete gets put in a jail cell, where these hardened criminals give him a hard time… 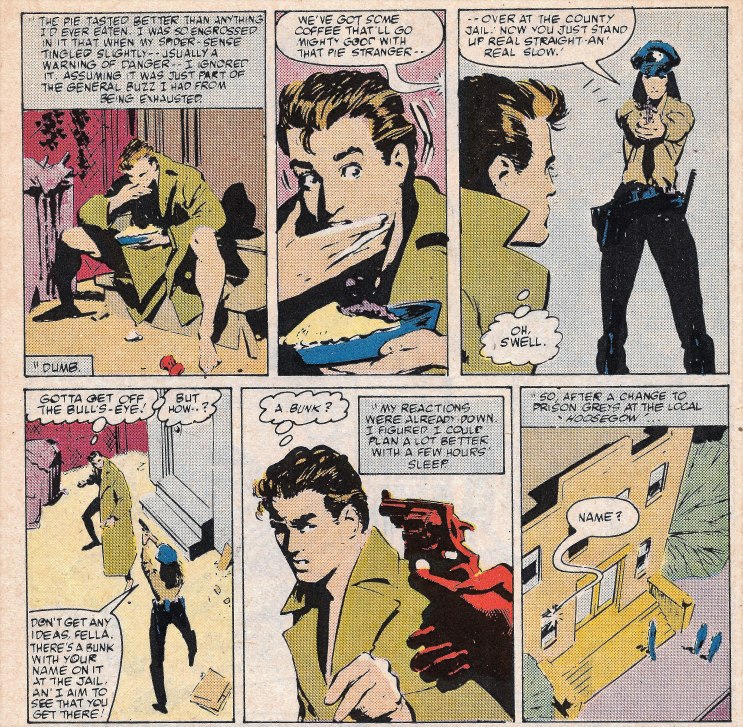 ..for all of two seconds after seeing him twist the metal bar holding the bunk bed aloft. Still, Peter gets NO sleep, as his spider-sense goes off all night long, every time one of the crooks so much as turns over in his bed. 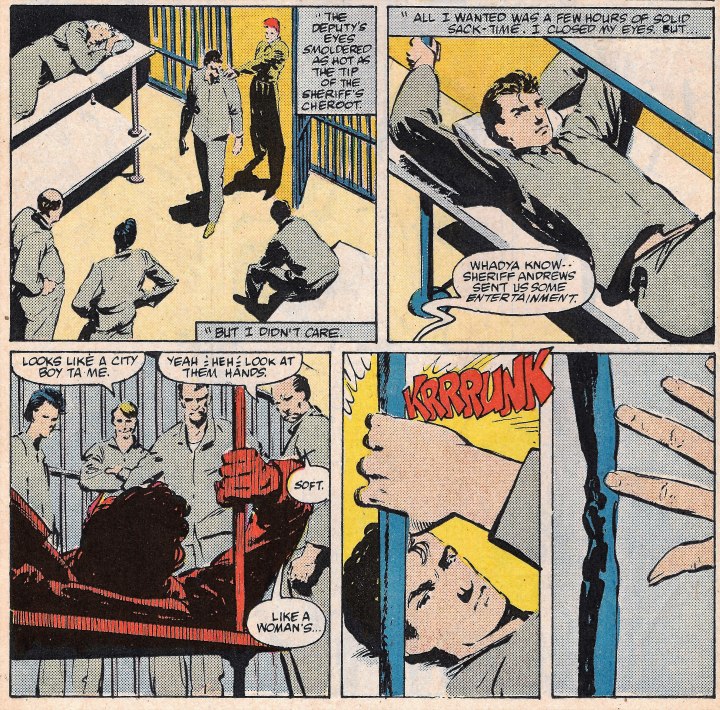 The next day doesn't go much better. 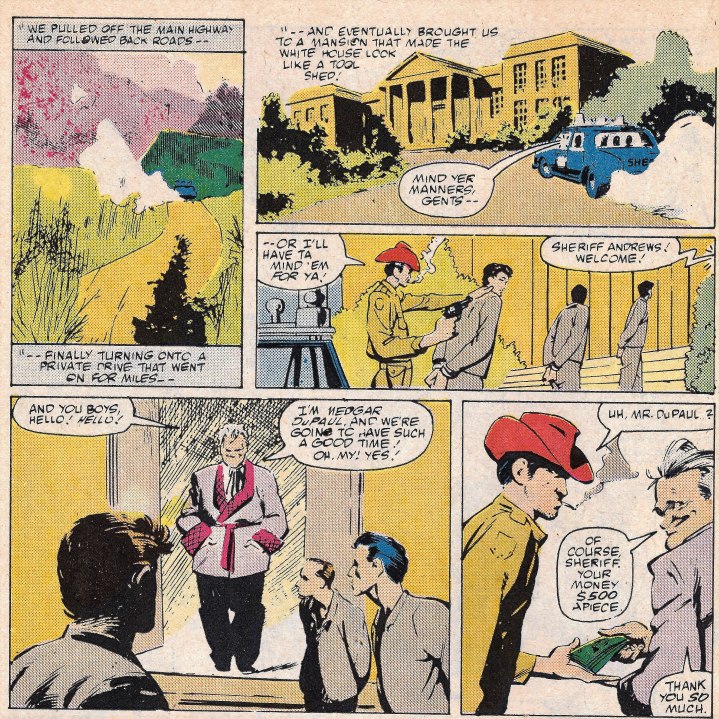 Parker is one of three inmates chosen for Sheriff Andrew’s special “work-release” program, which is essentially: this crazy and rich old white guy pays the Sheriff for prisoners so he can release them… 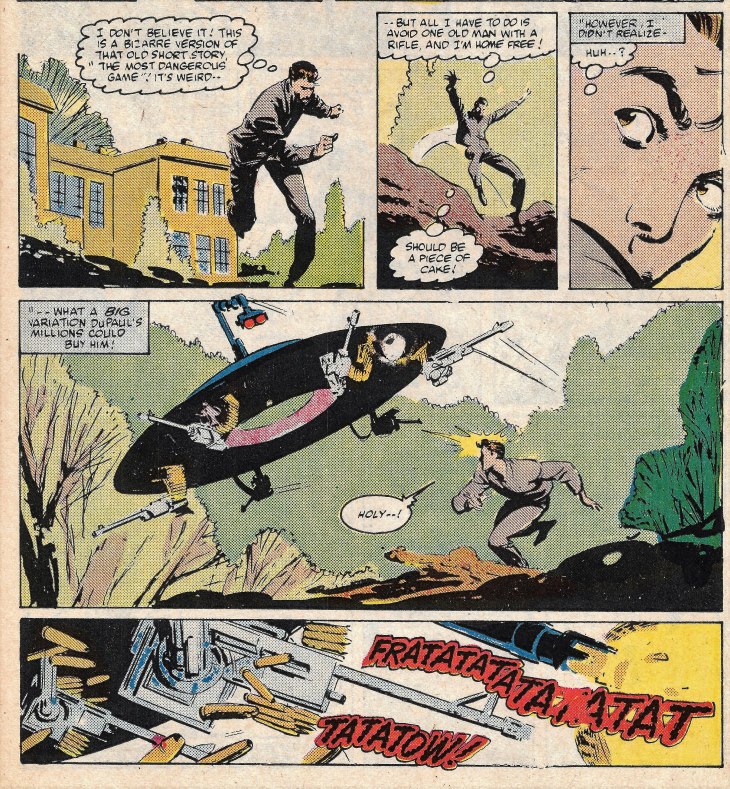 …into his backyard, where a remote-controlled flying gun platform drone can hunt them down and kill them. Deliverance never seemed so updated as it does here. 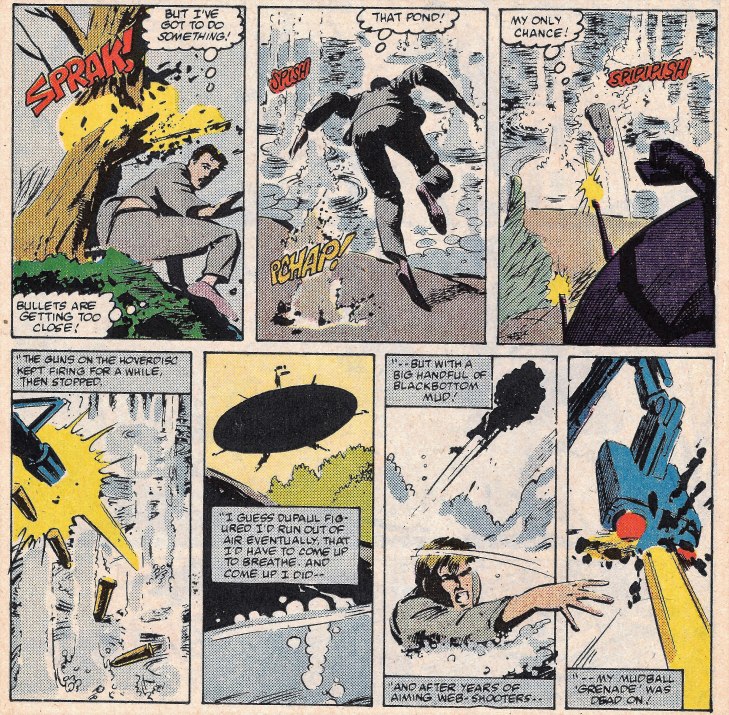 Of course, rich white guy never had a prisoner who could fight back, which upsets the balance somewhat now that Peter is involved. 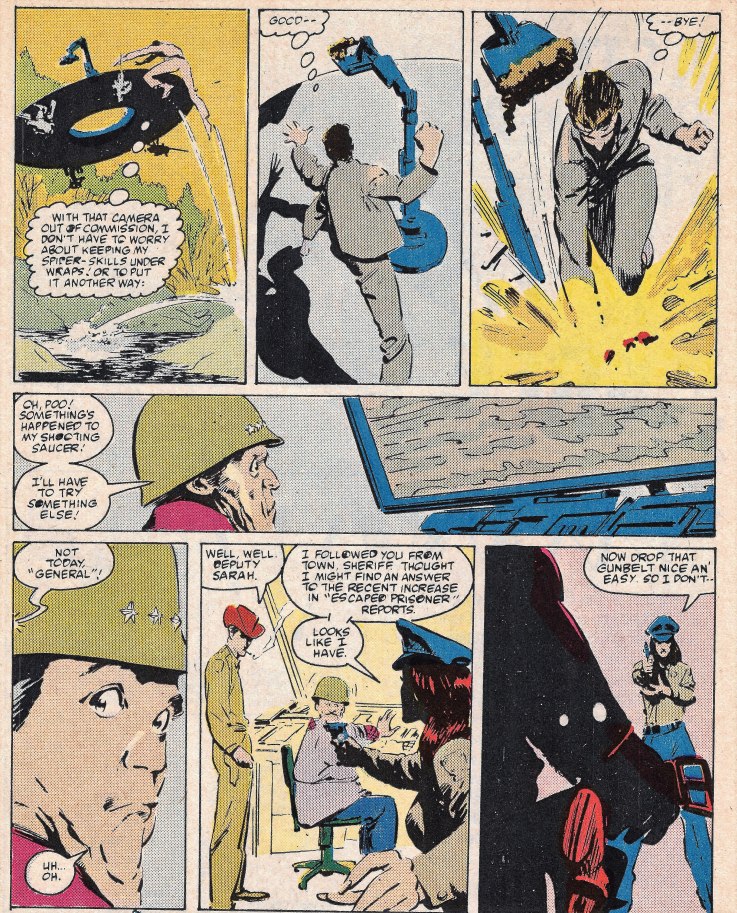 But, you know what they say. “It’s all fun and games until you invite Spider-Man to the party.” Also that nice, young lady deputy seems pretty much like a party pooper.

She gets distracted as the other two prisoners make off running in handcuffs (how far can they get like that, really?), which gives the Sheriff time to turn the tables… 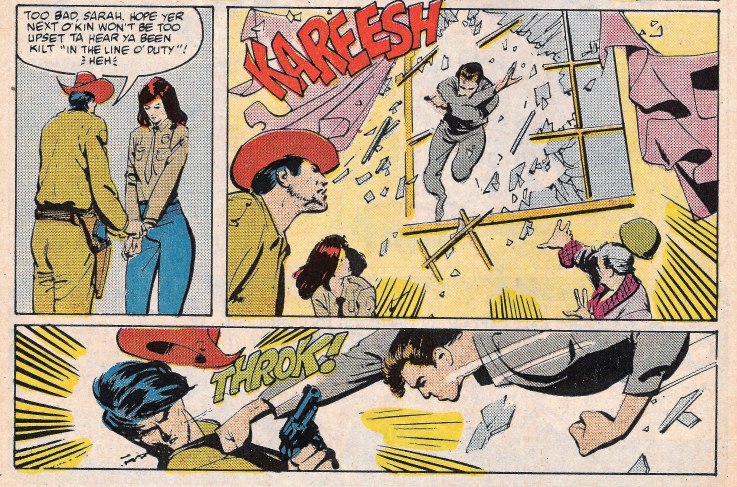 …and Spider-Man’s alias to turn them right back. 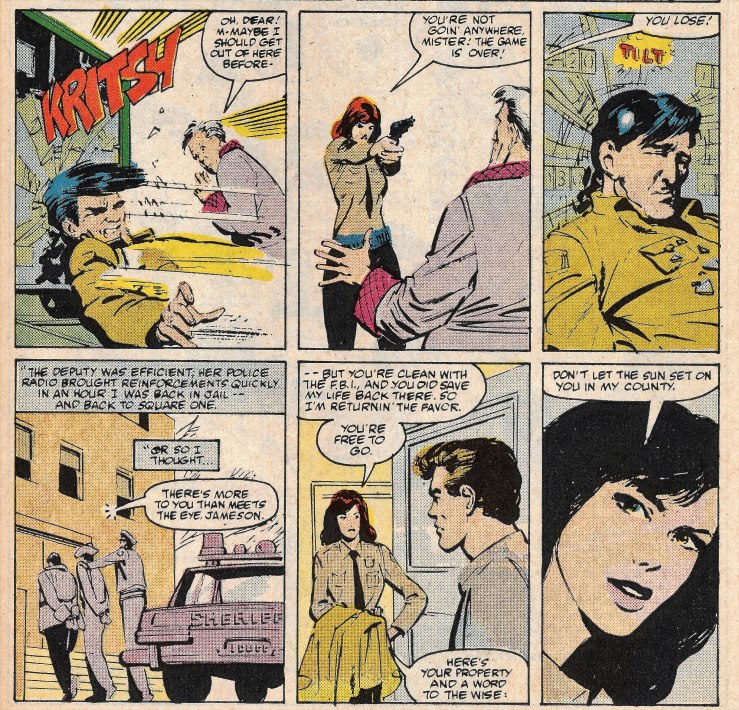 And as Parker racks up a tilt on the Sheriff’s plans, we find that the lady deputy lets him go in the end. Which solves this adventure, but leads him back to the task of getting home, accomplished by hitching a ride on a semi using his Spider-powers. 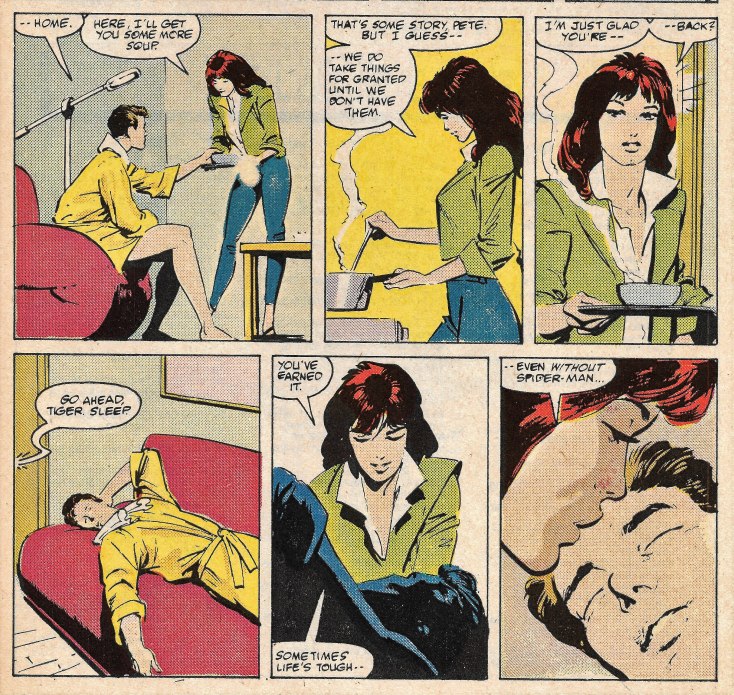 His tale finished, a bushed Peter sacks out on the couch for much deserved rest.

The next day is filled with apologies and explanations to Johan and Joy Mercardo as to how he disappeared. But the real ending of this tale is the first appearance of a new, unknown villain. 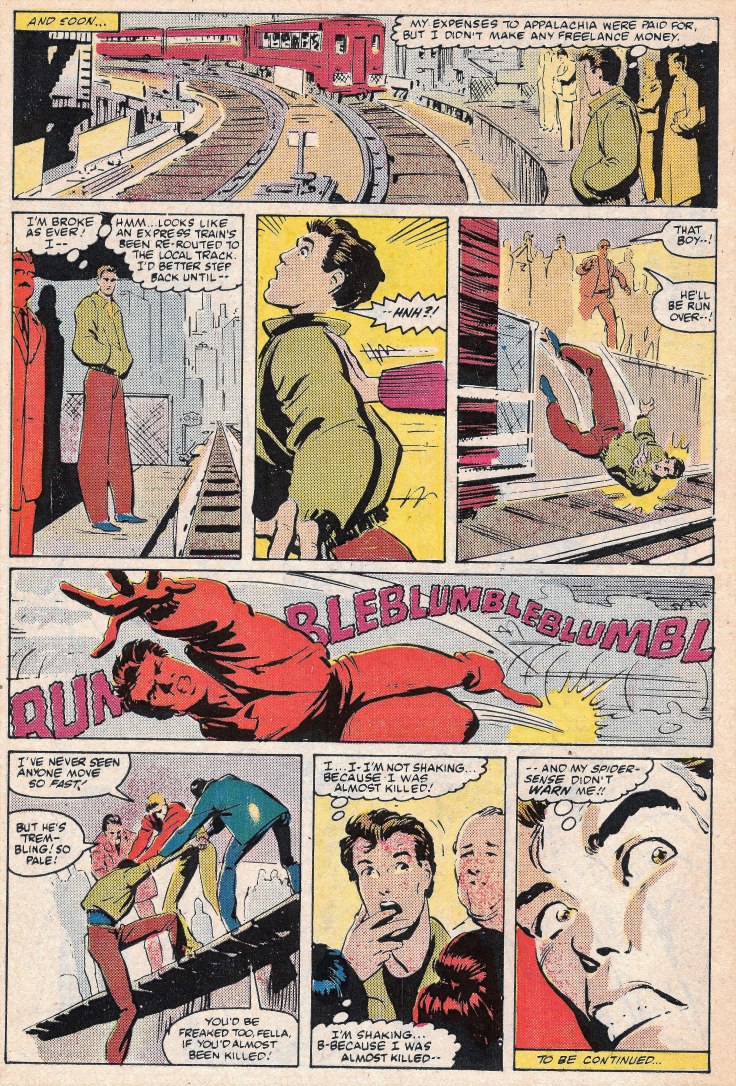 All we see is an arm shove Peter onto the subway tracks. And as Peter wonders if he is losing his Spider-sense, comic fans know that the true answer is the return of two very close “friends.”

I genuinely LOVED this all the way through. I get that some will not understand the meshing of these two men’s personal artistic styles and how that can make some of the best kinds of art. I understand if some would say that it wasn’t detailed enough like Silvestri’s later X-Men or Image work and they were looking for that. However, for me this is possibly the best of both these worlds.
Posted by SonOfCthulhu at 2:25 AM