Some random Spider-Man books, Part 13
A peek into a future Spider-Man movie, perhaps? 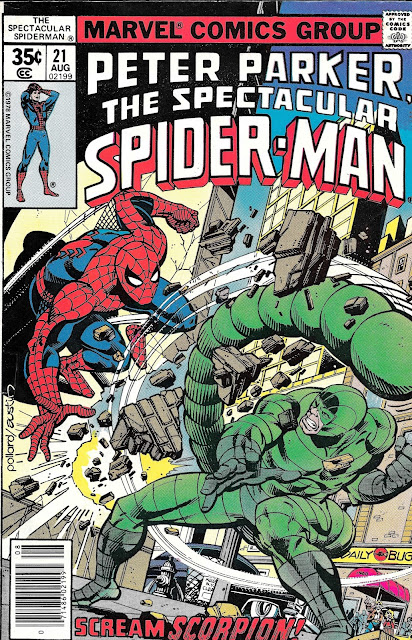 Okay, so I admit to having a huge amount of Spider-titles in the Crapbox to choose from. Some I’ll save for “later” but given that this one contains Scorpion, the villain of the NEXT Spider-Man movie, if the rumors are true, AND is written by Bill Mantlo... Well, how could I resist that?

Scorpion stories generally follow the same pattern. Mac Gargan, a shady private investigator, took money from J. Jonah Jameson to follow Peter Parker and figure out how he got such good pictures of Spider-Man. After Gargan failed many times due to Parker’s spider-sense, Jameson threw in more money to have Gargan undergo a dicey process developed by Dr. Farley Stillwell that would grant him the powers of a scorpion.

Stillwell reasoned that scorpions were spider’s natural enemies, so...

Outfitted with a tail and augmented by an untested process using modified scorpion DNA, Gargan emerged crazed and violent. His mind corrupted by the scorpion instincts instilled by the process, he lashed out. He directed his anger first at Spider-Man, defeating him twice, and then at Stillwell and Jameson, blaming the pair for being unable to take off his suit. In the end, Spider-Man rescued them from the very creature created to destroy him.

Scorpy factored into Ms. Marvel/Captain Marvel’s first few outings, as the comics tried to find a good sparring partner for the young lady, but he would return to menace Spider-Man time and time again.

In the oddest of occurrences, he had his spot almost taken in Spider-Man’s rogues gallery by Venom. The two share many of the same characteristics as villain archetypes and for a while in the early 1980’s you didn’t see many Scorpion stories as the role of “crazed psychopath driven mad with his own power and a hatred of Spider-Man” stories were all given to Venom. And then Venom got cancer and died. Well his host died anyway, and the Venom suit needed someone new to bond with. Which led to it bonding with Gargan due to his hatred of Spider-Man. So, for a while Venom actually supplanted the Scorpion character by completely taking his place in every way possible. It’s all kind of odd. 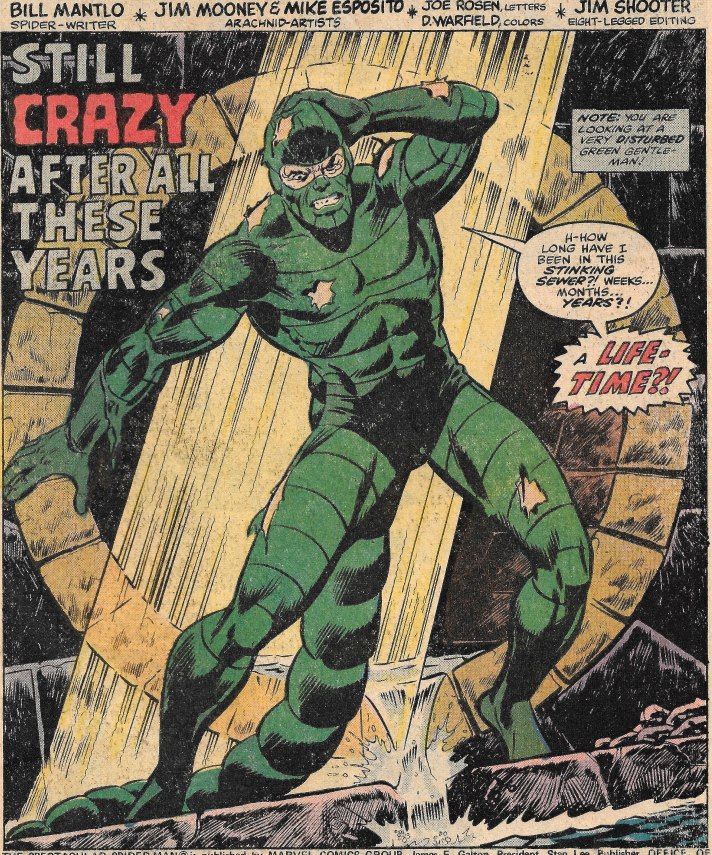 But here we have a story from the late 70’s, with Gargan still harboring his anger at Jameson and skulking around in the sewers. You can sure this will mean some conflicts with Spider-Man, just you wait and see. 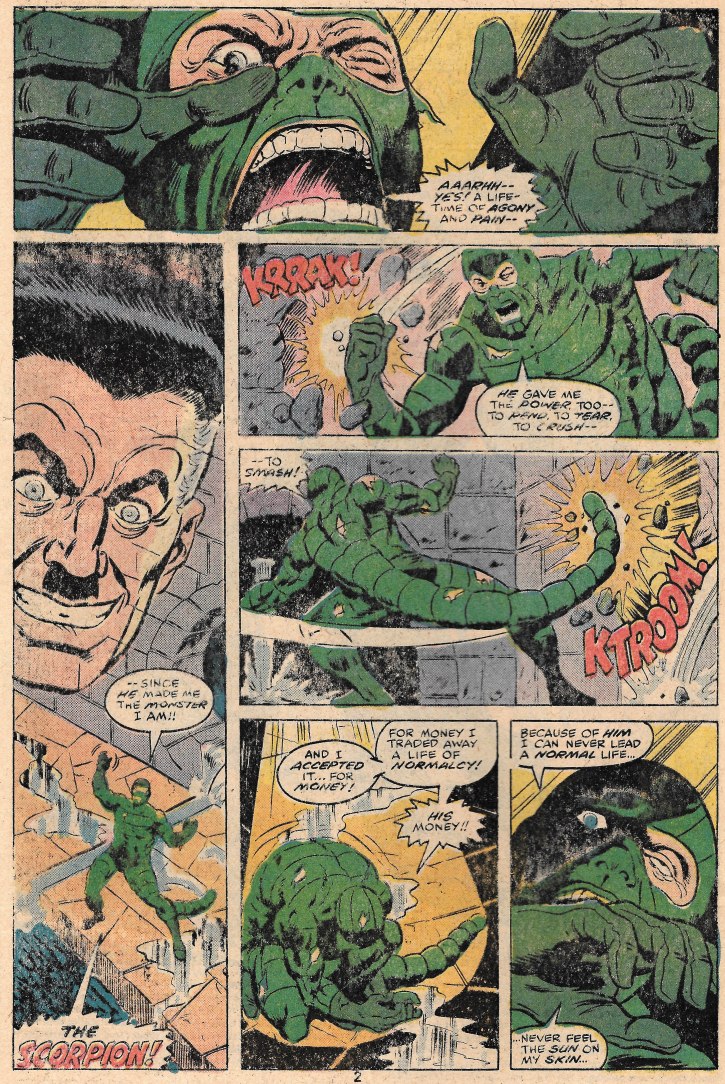 Mantlo uses these first few pages to give a little character background and to show his rapidly deteriorating mental state. It was originally implied that part of Gargan’s problem stemmed from the fact that he couldn’t take off his costume, but in this tale that is treated a bit like a metaphor too. 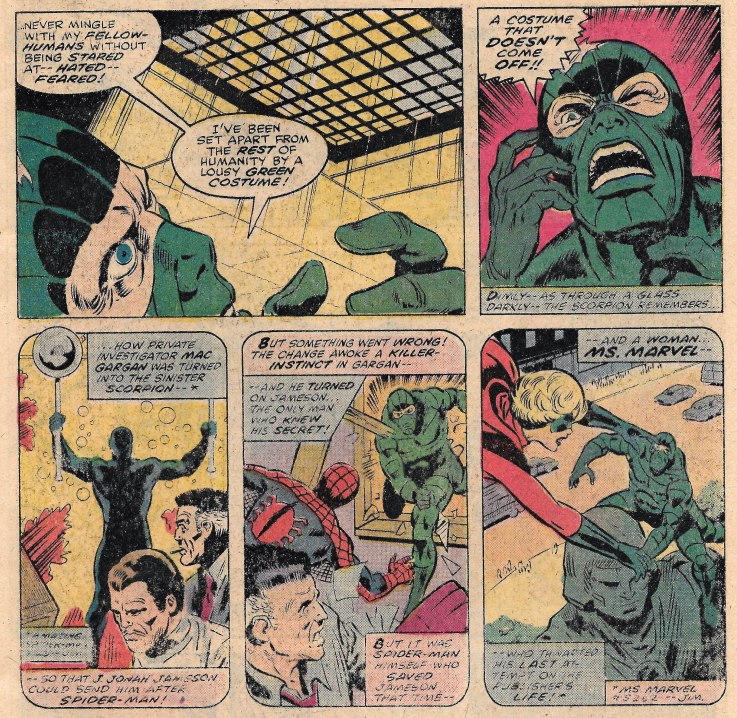 He swears vengeance as he stalks off in the final panels of this page. 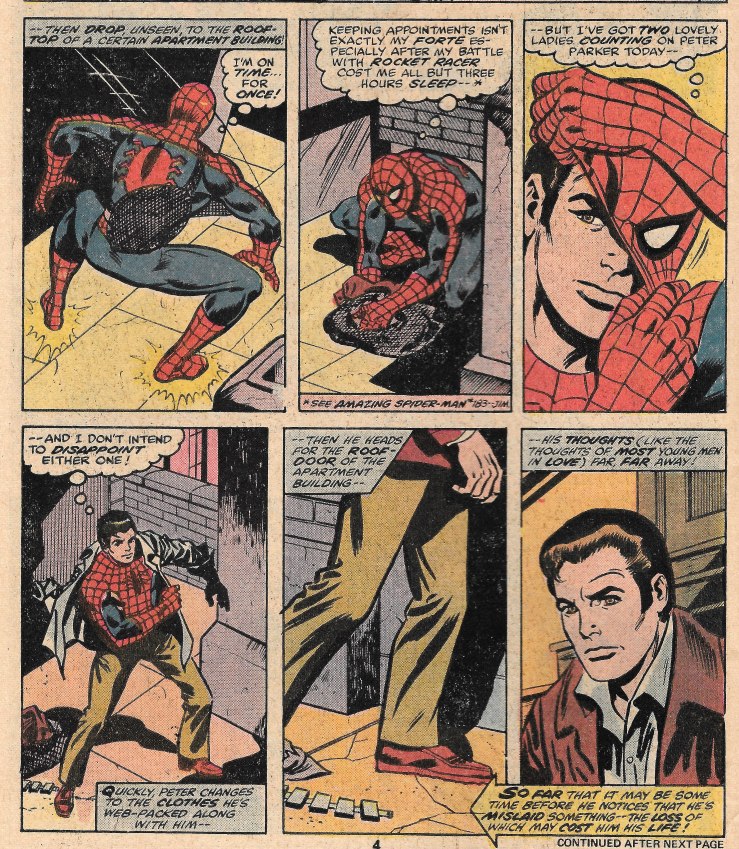 Next, we turn to Spider-Man arriving on time, for once, to a meet with Mary Jane Watson. However in his haste to change into his Peter Parker civvies, our hero loses track of his belt of web cartridges that he uses to refill his web shooters with.

Mary Jane is helping Peter pack some of May’s things to take to her in the hospital and dealing with her feelings for Peter too. They kiss briefly when they meet, but there is a question of marriage hanging between them. Peter has proposed and Mary Jane’s answer isn’t a simple yes or no. 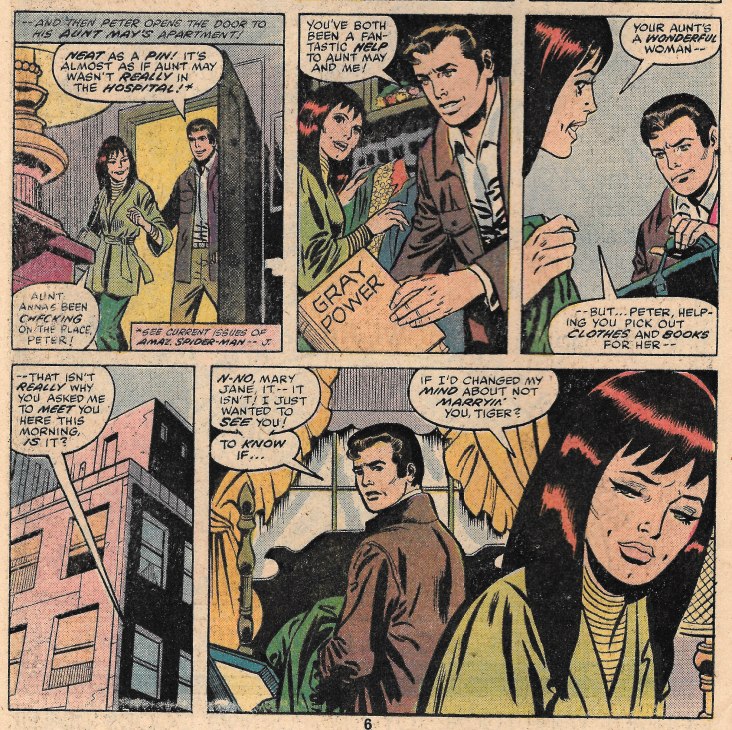 Nice to revisit them back when they had real feelings for each other and a struggle to understand what those emotions might mean. 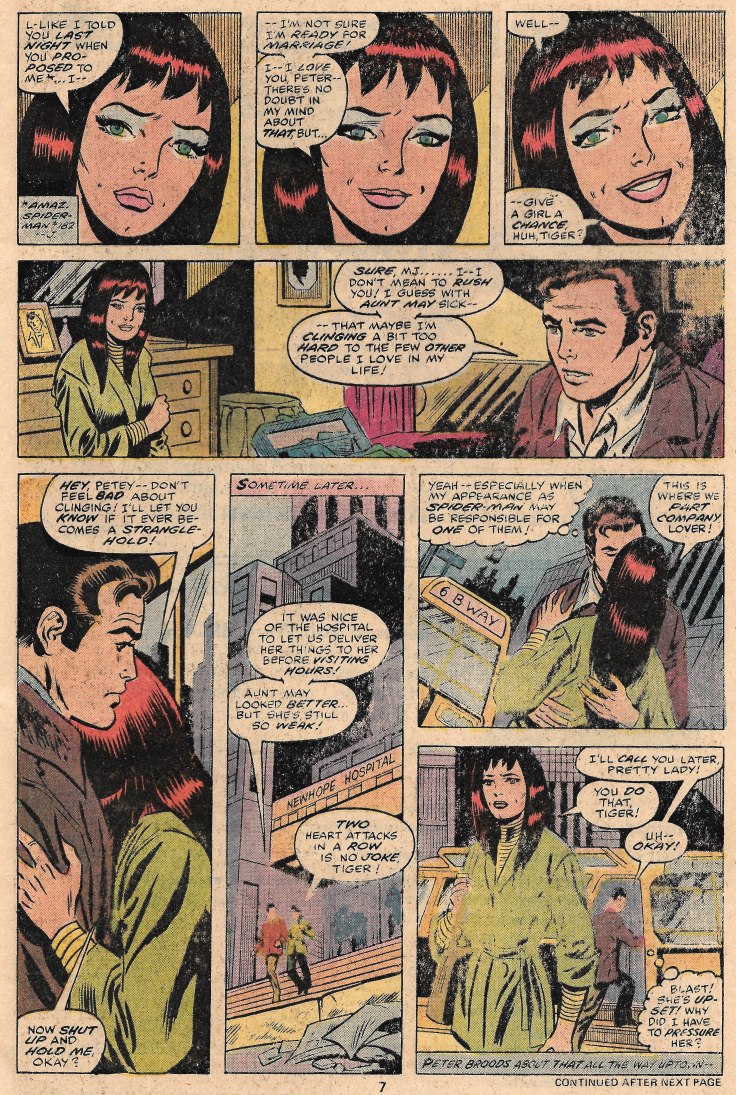 We get peeks into all of the rest of the cast in a rush through Empire State University and then a montage of Peter studying and meeting with instructors. But he is so bothered that none of it makes any headway with the young man. He ends up checking in at the Bugle to find out if there is any work assignments.

Gargan breaks into Stillwell’s abandoned underground lap and applies the same augmenting process that made him into the Scorpion to himself again in an odd reversal of his previous motivations. As he says: “If ya got it, flaunt it!” I suppose so. 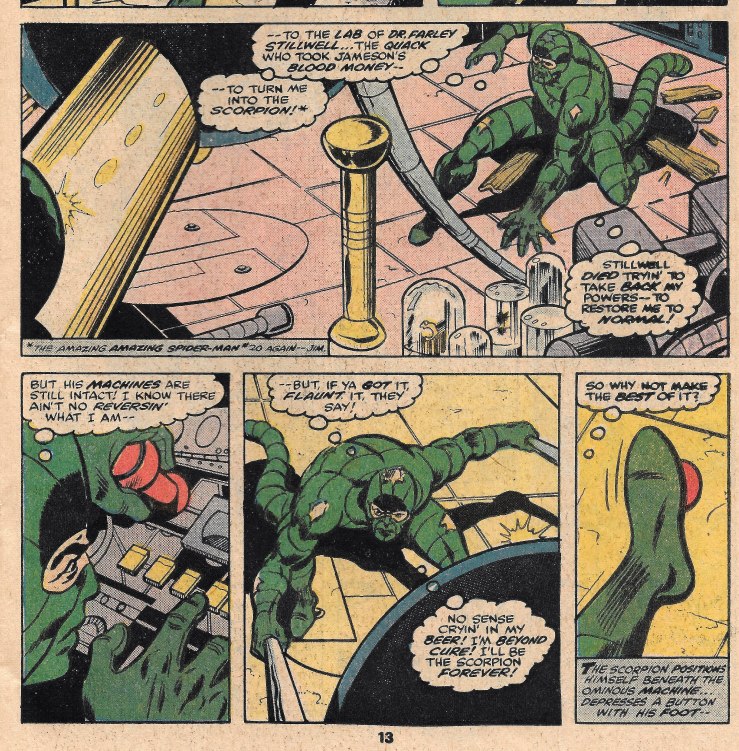 The process creates an even more crazy Gargan who might have a bit more power too. And this adversary carries the commitment to making Johan pay very seriously. 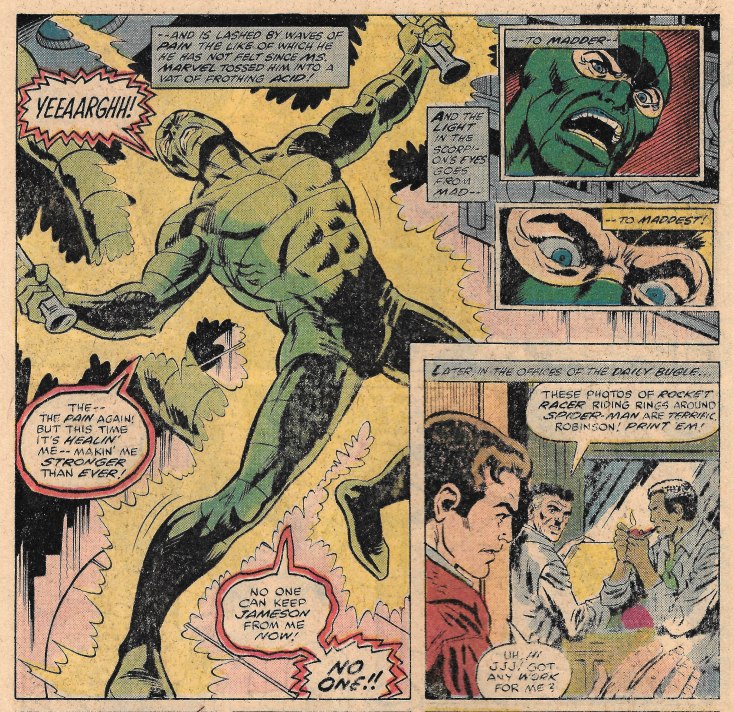 While Parker skulks around the Bugle office looking for work, Scorpion arrives on the street outside, ripping hunks of it up and hurling them at the building. All the while he screams for Johan’s head. Robbie acts like the true leader here while Parker suits up and heads down to take care of things. 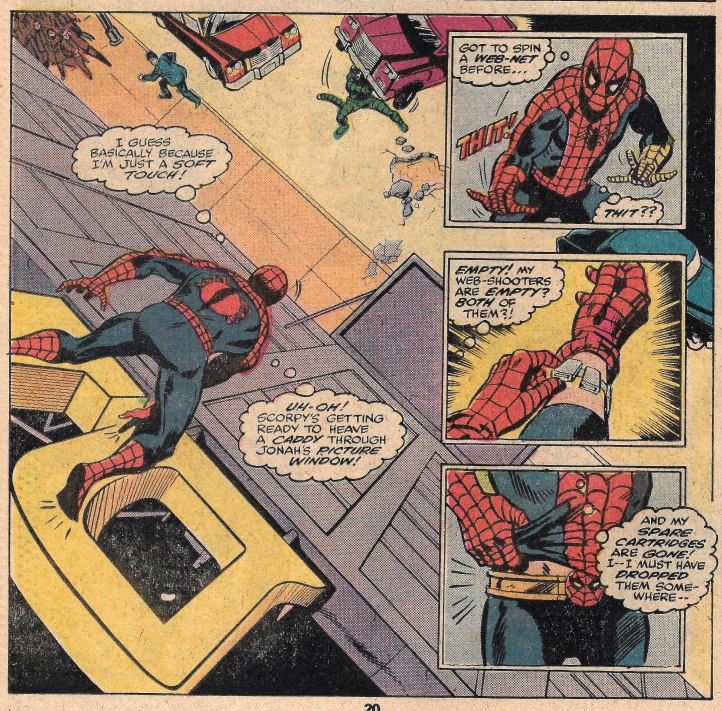 Unfortunately, here is where those webshooters not being full comes into play. We have a vastly more powerful Scorpion fighting a Spider-Man without his main offensive weapon. This should be interesting… 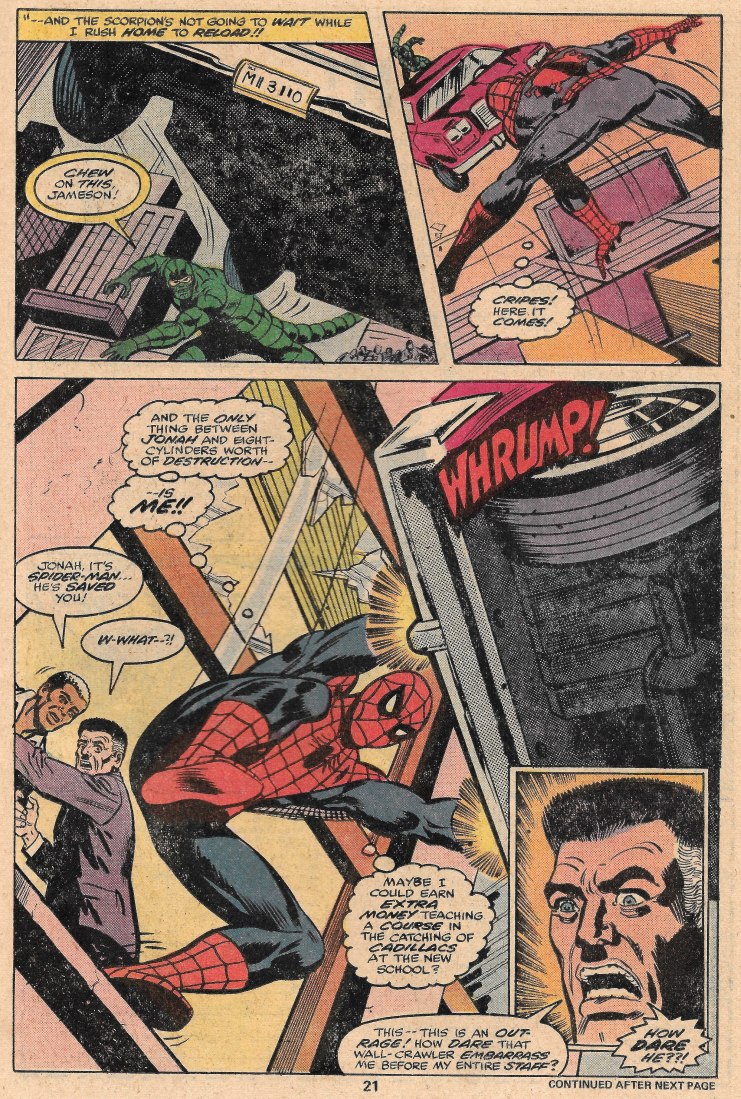 …and Spider-Man is there with his catcher’s mitt. Interesting indeed. But even Spider-Man can’t hold the weight of an entire family-sized sedan suspended out the window of a skyscraper several stories up. Maybe if Gargan threw a Mini Cooper or a Civic instead? Moot point. Spider-Aarghh, as Gargan articulates, uses the car as a bludgeon, riding it down right into Scorpion. Someone ring that fight bell. 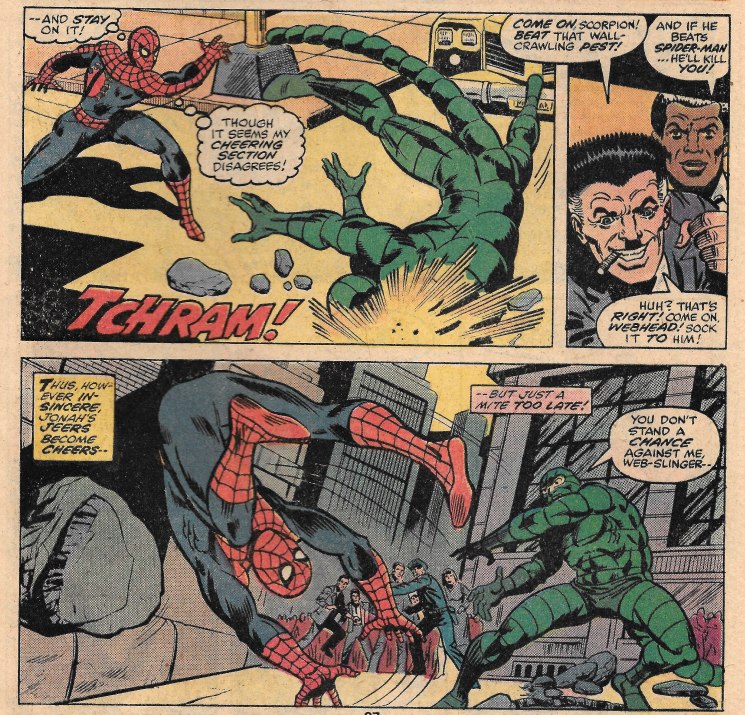 …then Gargan makes the mistake of popping Spider-Man good with his tail. Ole web-head gets up angry, mopping the floor with Gargan in VERY short order. 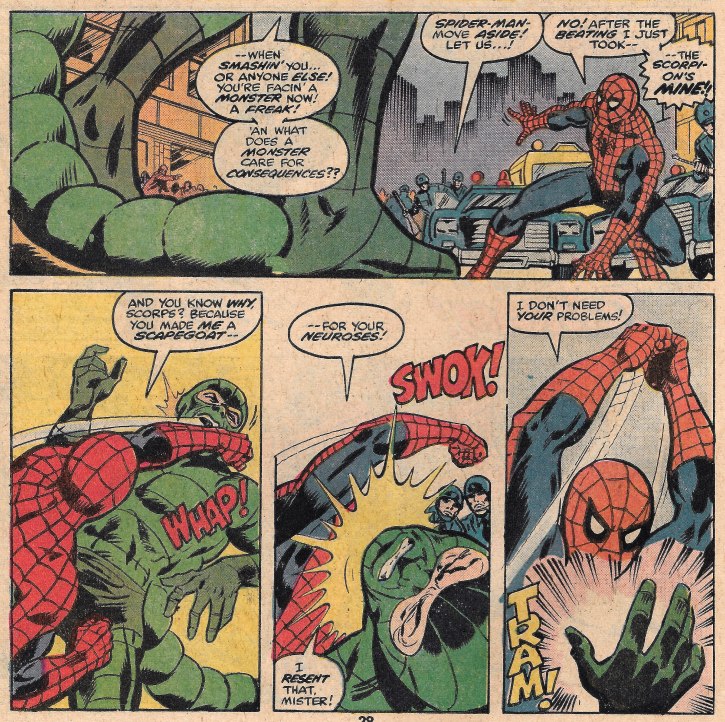 And with that, Spidey takes him out and proves Gargan can take the costume off. The implication being much of Gargan’s issues are more mental than physical. It’s a neat point. 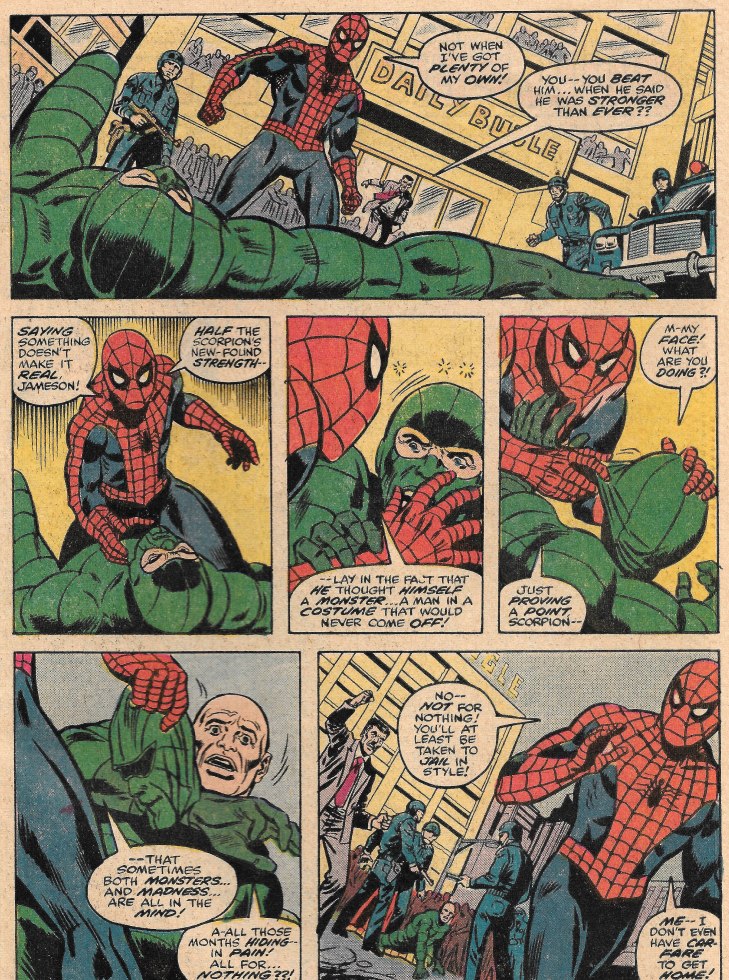 Spidey winning the battle so easily sans webshooters means Scorpion may be a weak contender in our next movie. Or just like this one, the main villain will be paired with a minor menace. My money’s on Hypno Hustler, but that might cost the prop department too much in platform heels. Only time will tell.
Posted by SonOfCthulhu at 2:29 AM